The courtyard, that noble architectural effort to bring the outside in, is a simple endeavor that never fails to uplift. And nowhere is its use more impressive than in the riad hotels of Morocco.

Over the years we’ve used these pages to talk about quite a few different examples of dramatic hotel architecture, from brutalism to modernism to stilts. Of all the design features in hotels, though, perhaps none is more emotionally affecting than the simple courtyard. It’s hard not to be moved by the unexpectedness of an open-air space within the confines of a building. Birds, trees, and breeze become elements of the interior — the visible sky practically reaches down to lift the spirits.

On Tablet, courtyards show up most consistently in riads and dars, traditional Moroccan homes located throughout the walled medinas of cities like Marrakech, Fes, and Essaouira. They have become tremendously popular for conversion into boutique hotels, and for good reason. Riads are typically a few stories high, with rooms and windows that face completely inward, organized around a central garden or courtyard. Though the terms are often used interchangeably, especially when it comes to hotels, a riad technically centers around a garden, while a dar is organized around a courtyard.

The distinctive structure of the riad provides privacy from the bustling streets of the medina, as well as shelter from the sweltering summer sun, while still allowing for generous interaction with the outside world. Many riads even have relaxing rooftop terraces with small pools and stunning views out over the quarter. They are the quintessential Moroccan residence, bursting with charm and romance, and they are the absolute best way to immerse oneself in the culture of the country’s labyrinthine city centers. Here are fourteen of our favorites. 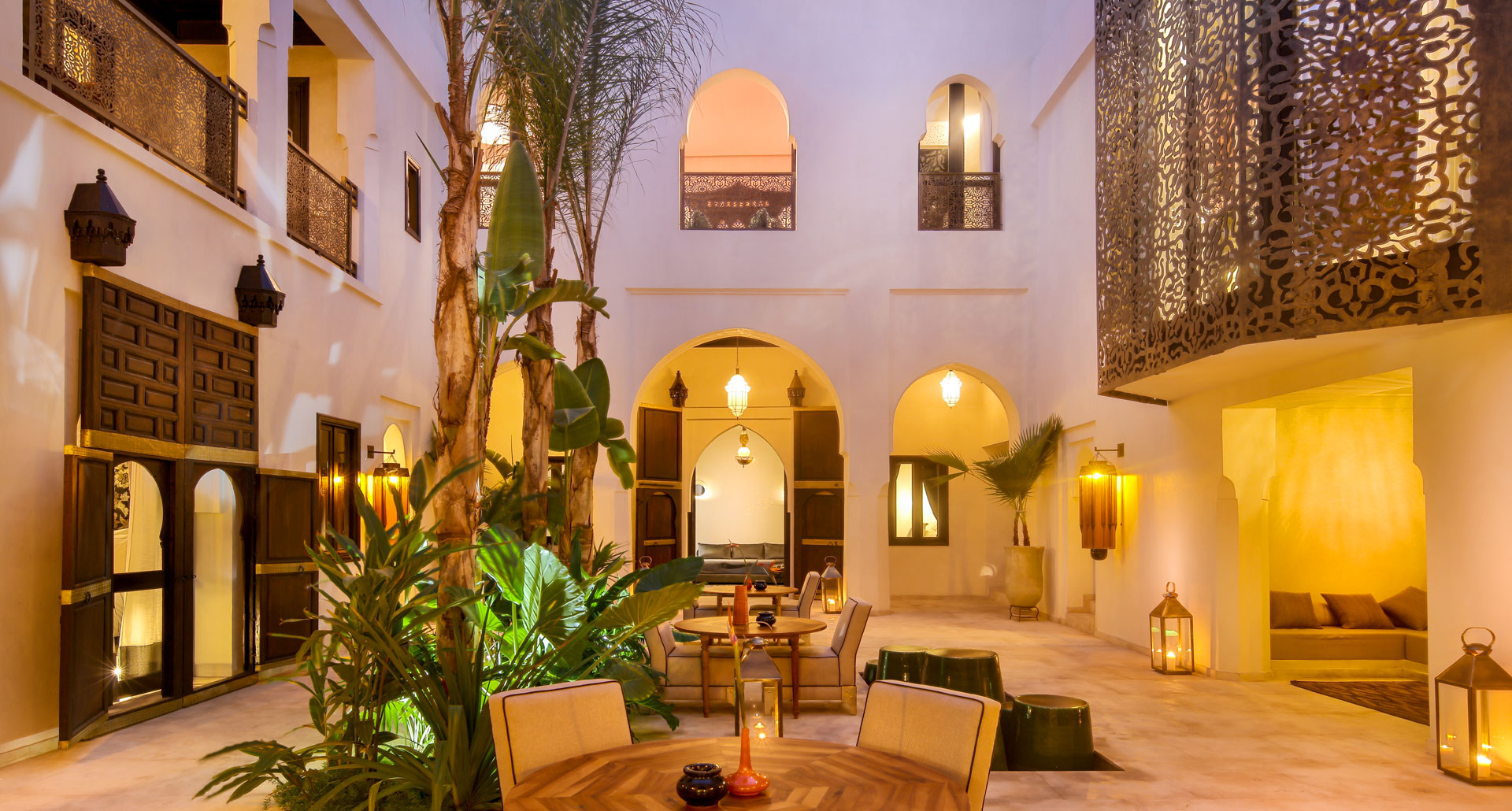 Dar Kandi, a 1915-vintage residence in Bab Doukkala, near the central Jemaa el Fna, has always been among the notable riads in Marrakech, but it’s only now, after a 2018 renovation by its new Italian owners, that it’s become an absolute must-stay. 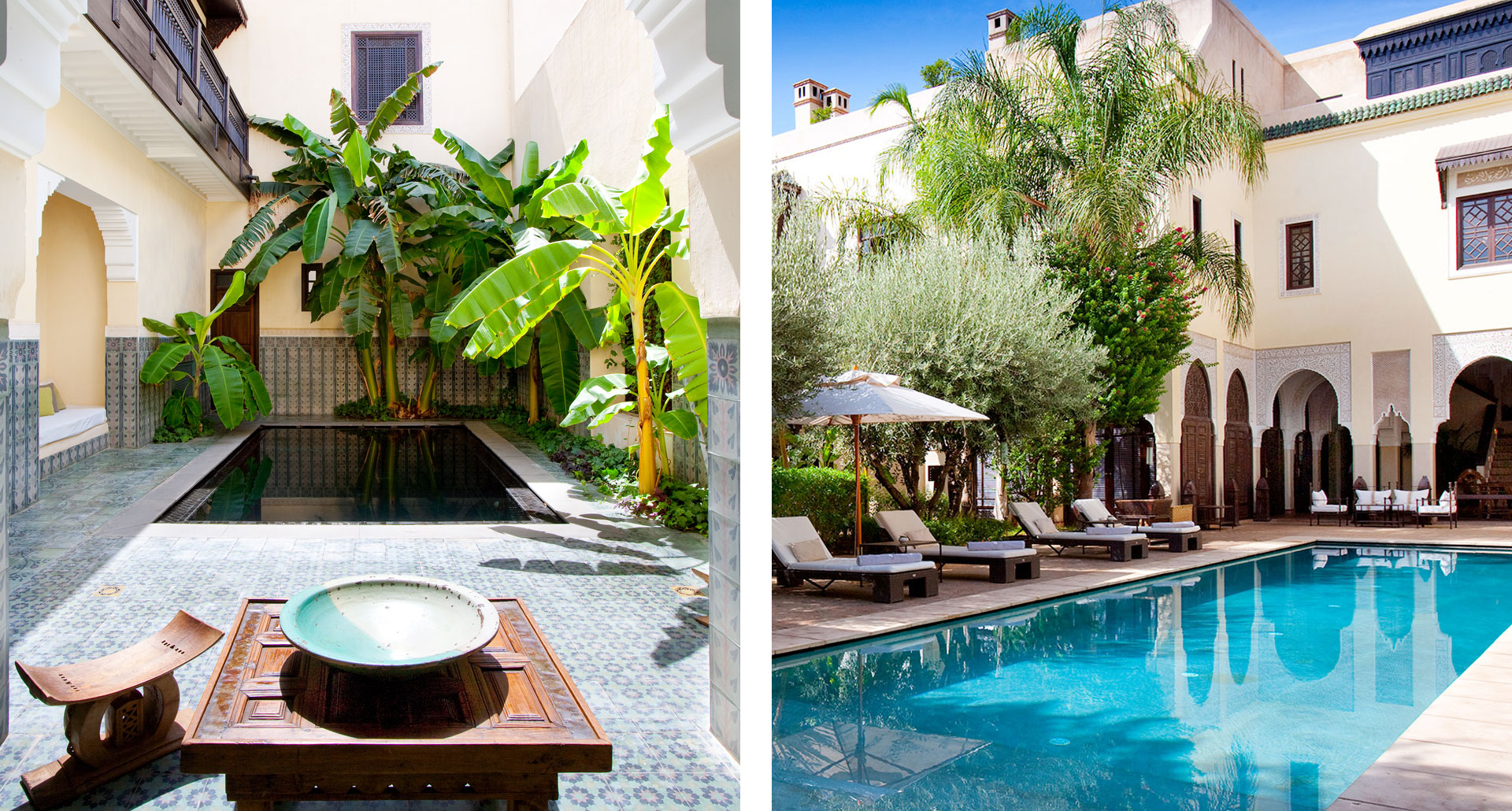 Key to the appeal of a riad hotel is the contrast between its city surroundings and the serene atmosphere within the riad’s walls. Behind a heavy carved wooden door on the rue Sidi Mimoun lies La Villa des Orangers, a pair of early 20th-century residences surrounding a pair of tranquil courtyards, one with an eighteen-meter heated pool, the other with a babbling fountain and a scattering of sofas and armchairs. 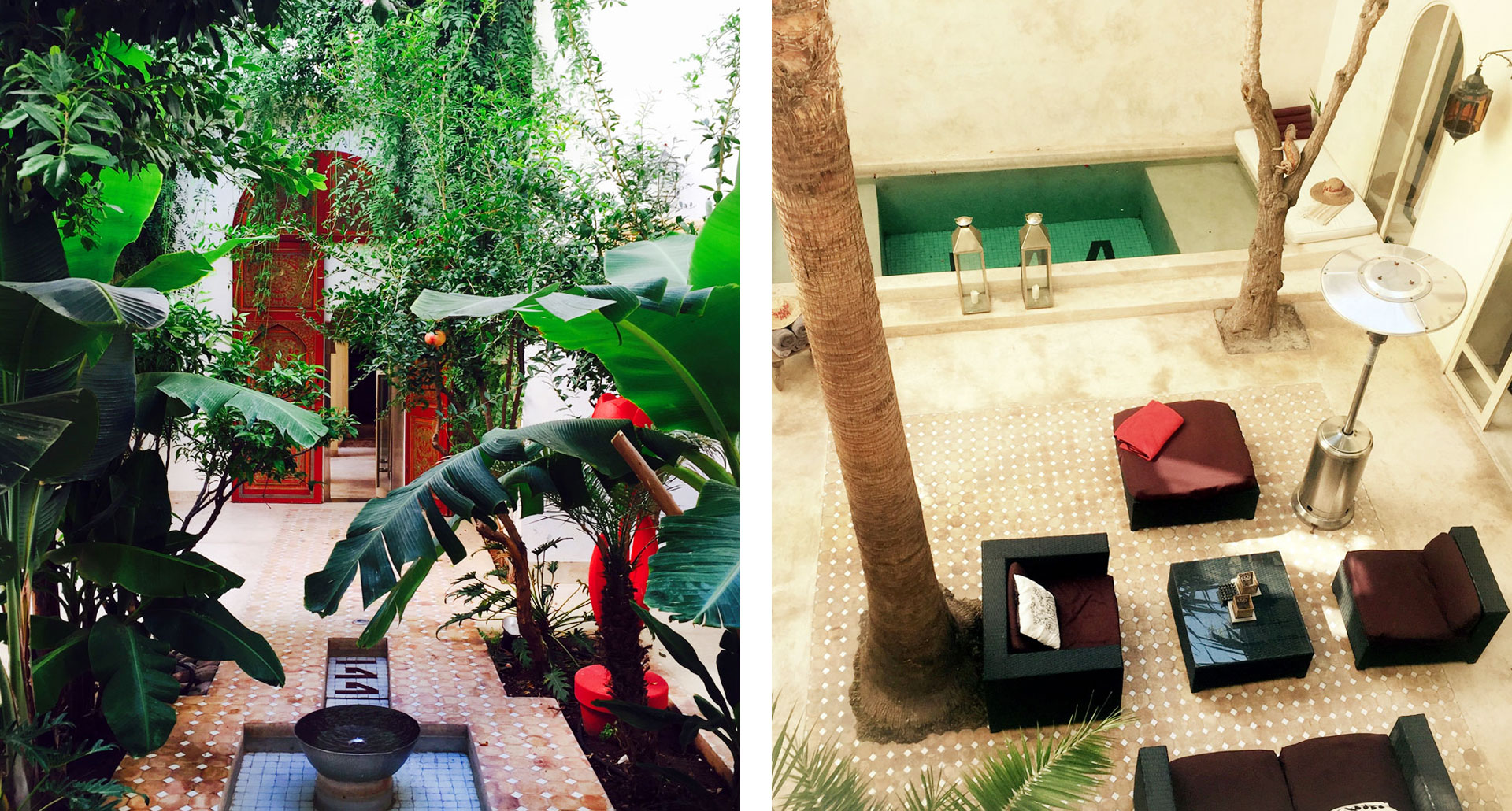 Just to the north of the souk in the Sidi Ben Slimane district is Riad 144, and you’ll have the quintessential “am I lost?” Marrakech medina experience as you wind your way down a rabbit’s warren of alleys on your way to the house’s heavy front door. But once you’re through, you’ll find you’re in for something a bit more dramatic than the ordinary riad hotel. 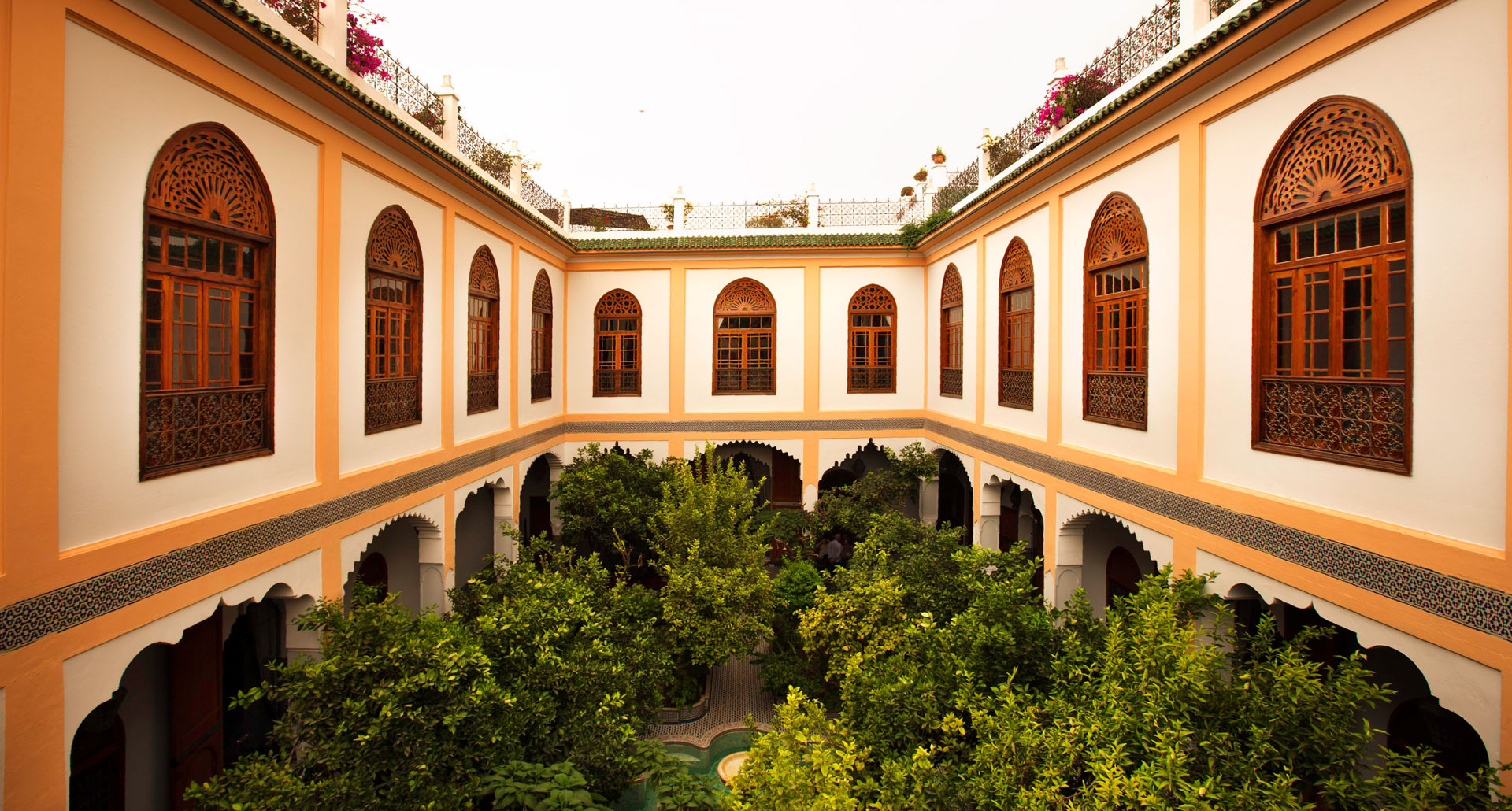 For many first-timers in Morocco, Marrakech is an intense enough introduction. But if you want to dive deep into this country’s history and tradition — and avoid some of the crowds and much of the mass tourism industry — you just might find that Fes is more your speed. And Palais Amani is just what you need: a classic riad hotel, a luxe fifteen-room lodging built from a restored 17th-century palace. 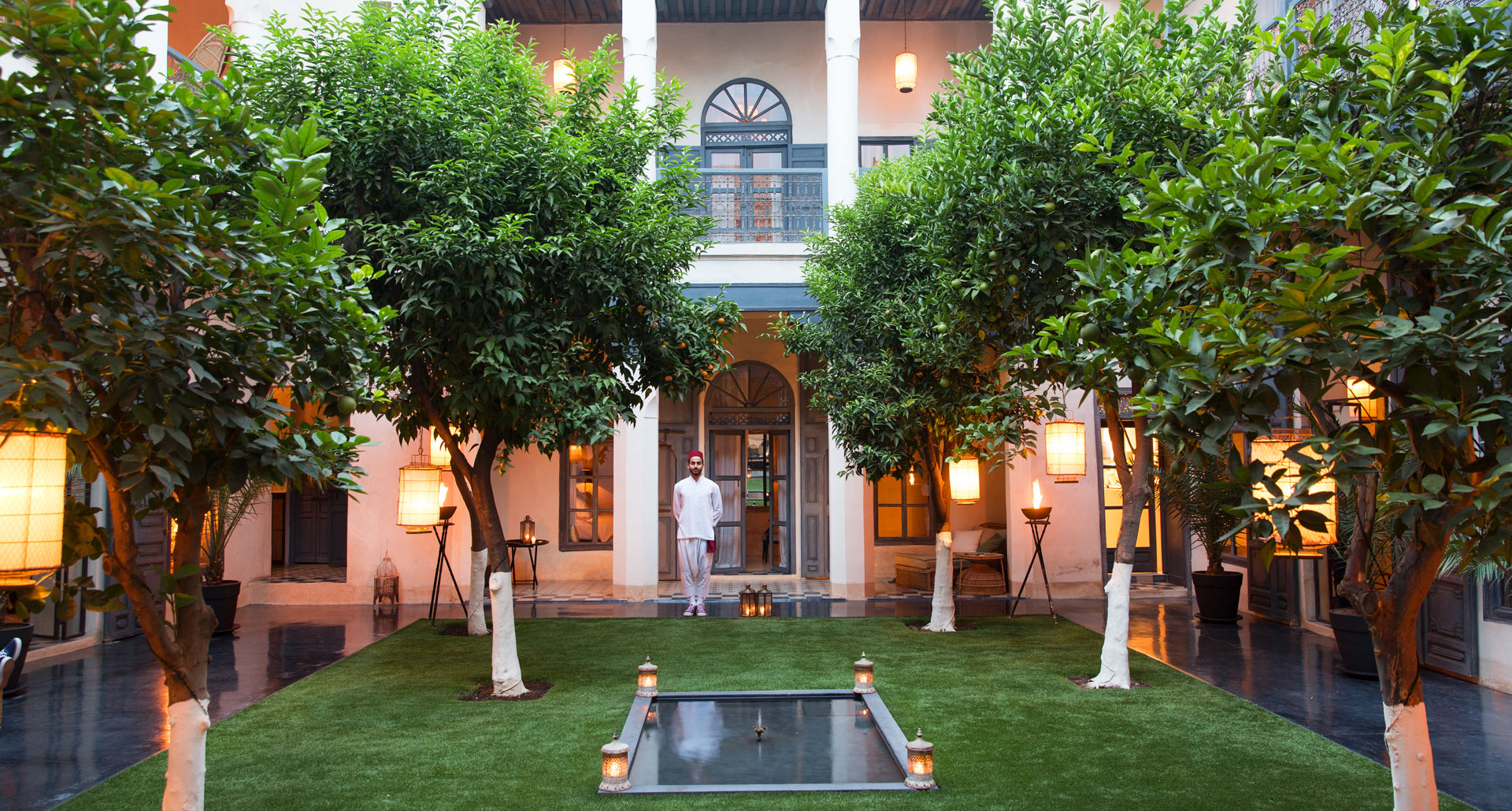 The riad hotels of Marrakech, by their very nature, are small — these walled residences simply don’t scale up to grand-hotel proportions. So if you feel like there too many riads to keep track of, you’re not wrong. But within the endless repetitions of the form there’s plenty of subtle diversity, and what sets Riad de Tarabel apart is two things: its sheer grandeur, and its aristocratic French Colonial style. 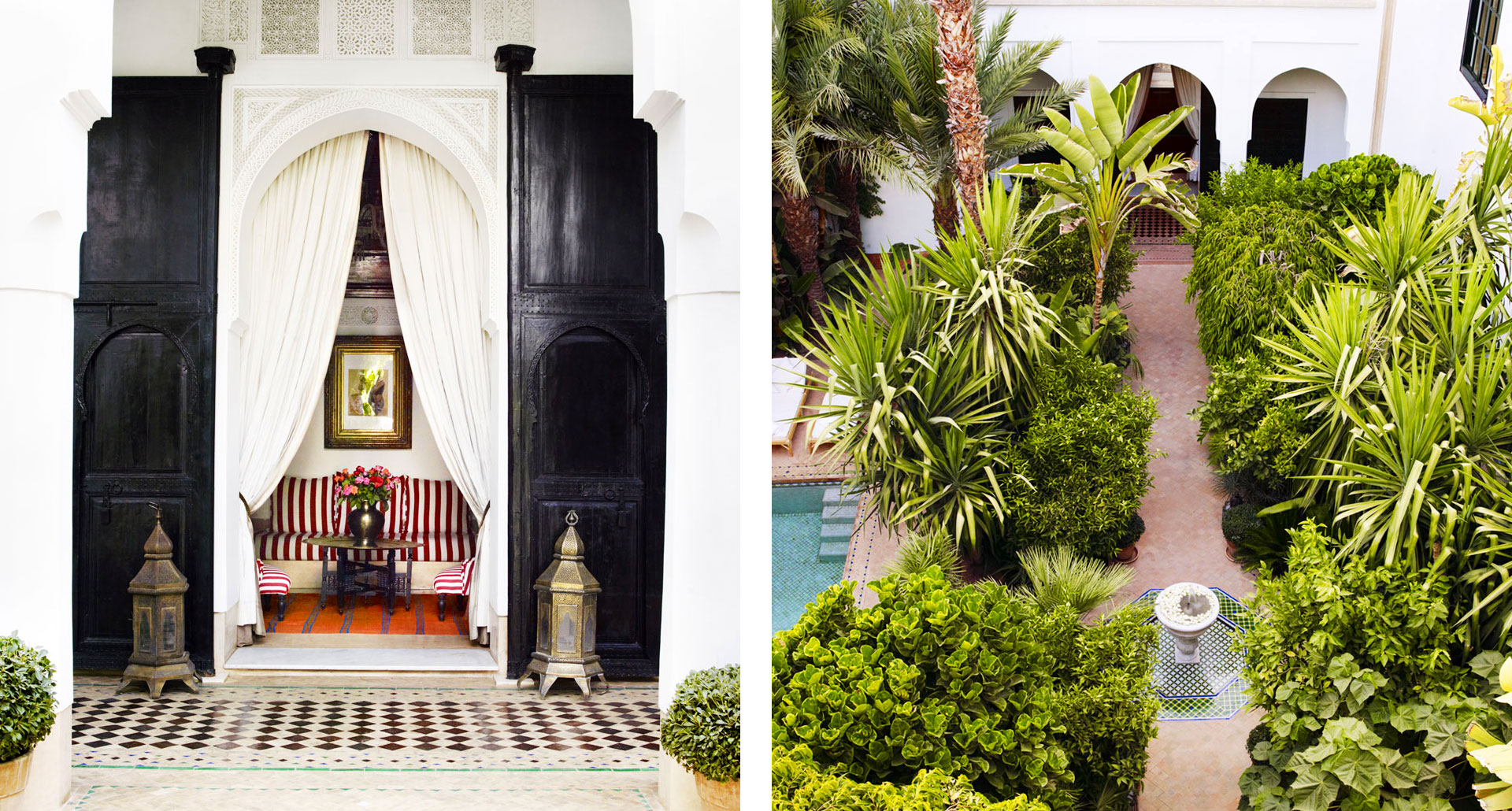 It’s often tough to put a finger on just what it is that separates the best riads from the next-best. L’Hôtel Marrakech, by contrast, has a memorable personality stamped all over it: that of Jasper Conran, favorite designer of Diana, Princess of Wales, and son of Sir Terence Conran, himself a designer who’s no stranger at all to the upper reaches of the hospitality world. 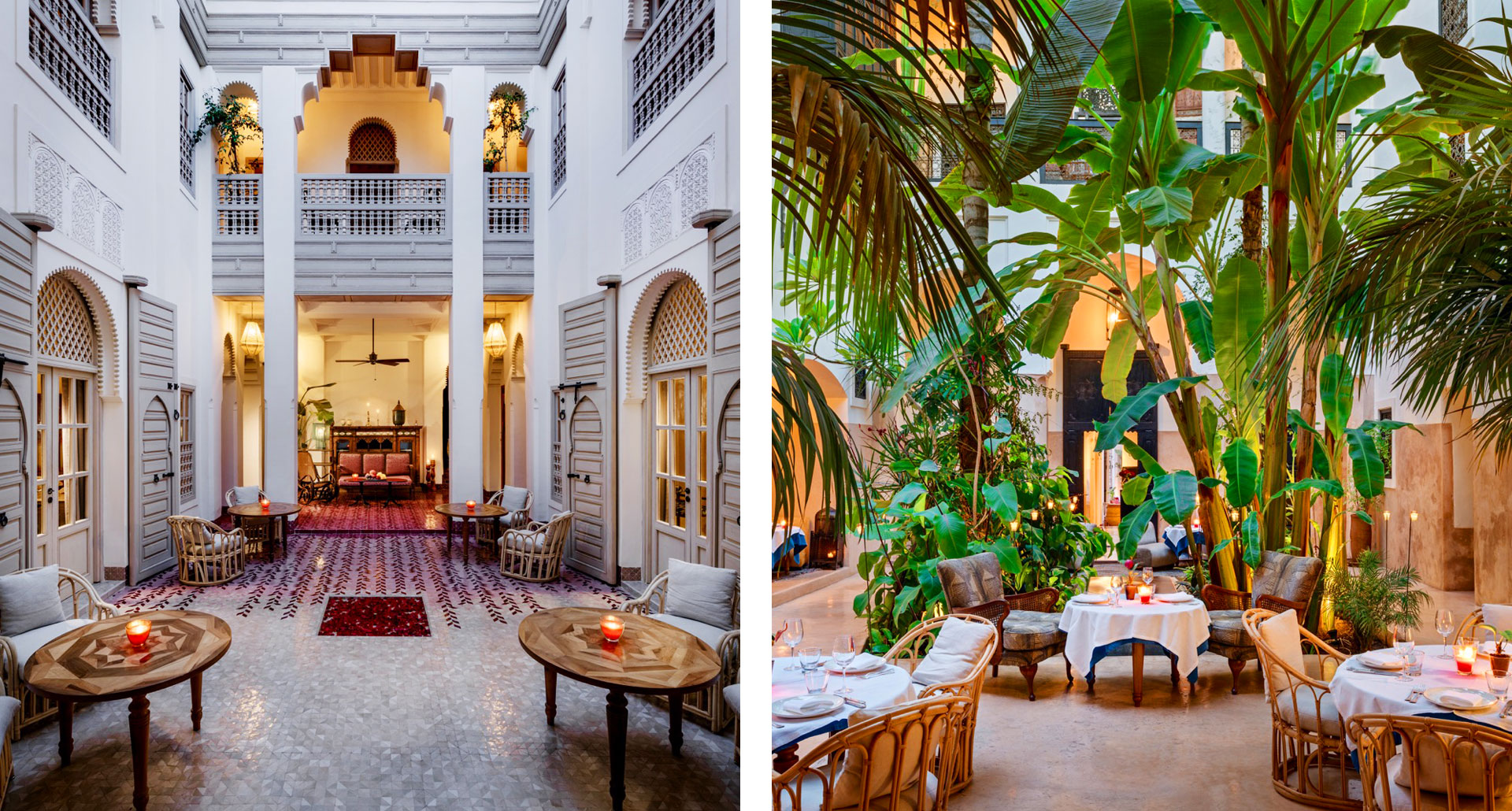 We liked it well enough when it was just a single small four-bedroom house, but 72 Riad Living is proof that riad hospitality can scale up without losing its essential charm. In its current incarnation it’s up to 13 rooms, surrounding a pair of central courtyards, tucked into the winding streets in the Marrakech medina. Old-world Moroccan atmosphere is to be expected from a hotel like this, and 72 delivers, to say the least. 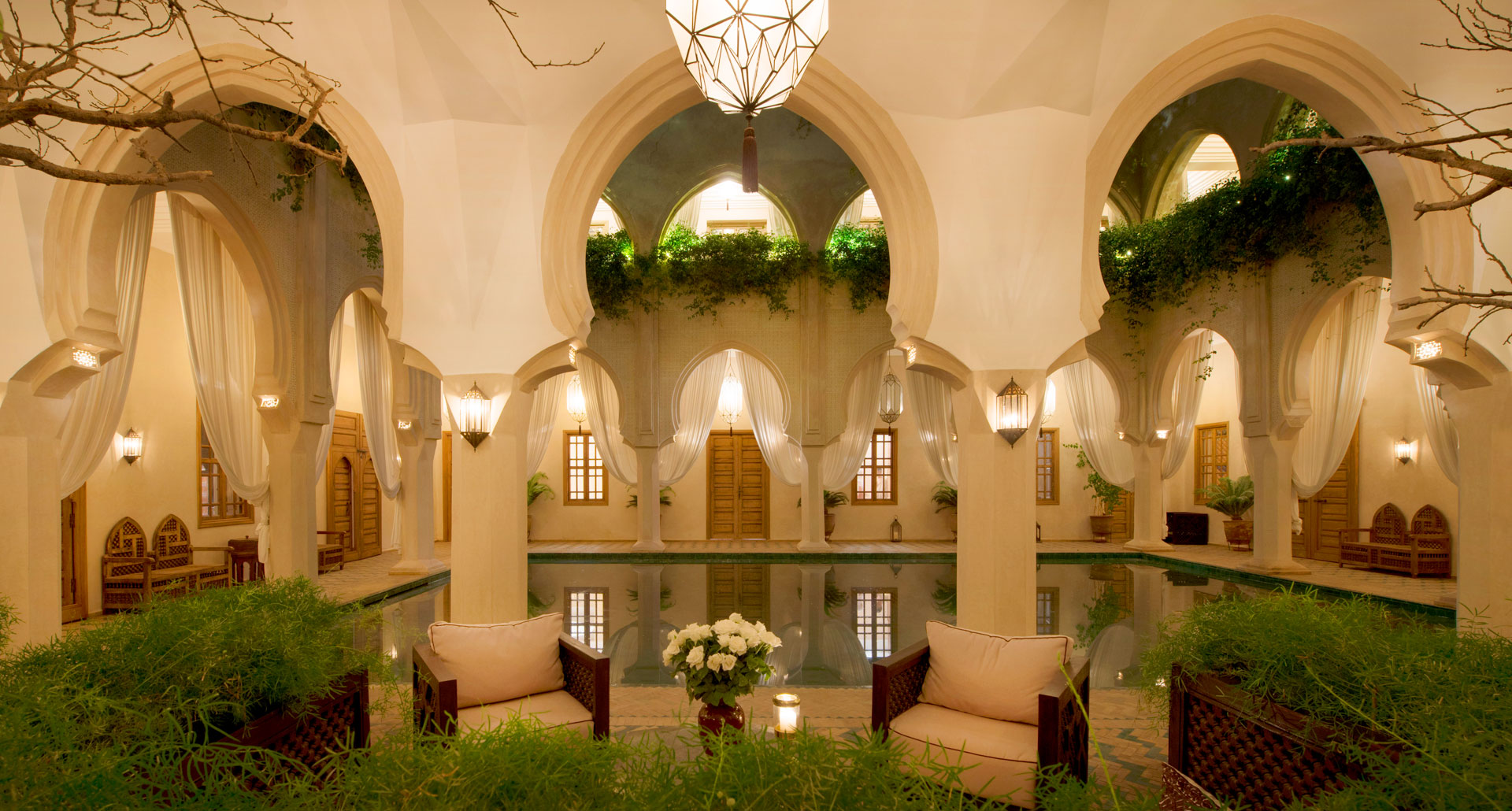 When a riad owner has a particular vision for the place, and goes to the extra effort to realize it, the effect can be downright magical. So it is with the new Almaha Marrakech. The inspiration, in this case, was Charles Baudelaire’s poem “L’invitation au voyage” (Invitation to the Voyage) — a poem that evokes, among other appealing sensory images, “comfort and beauty, calm and bliss” and “treasure galore,” “rarest blooms” and “amber-like perfumes.” 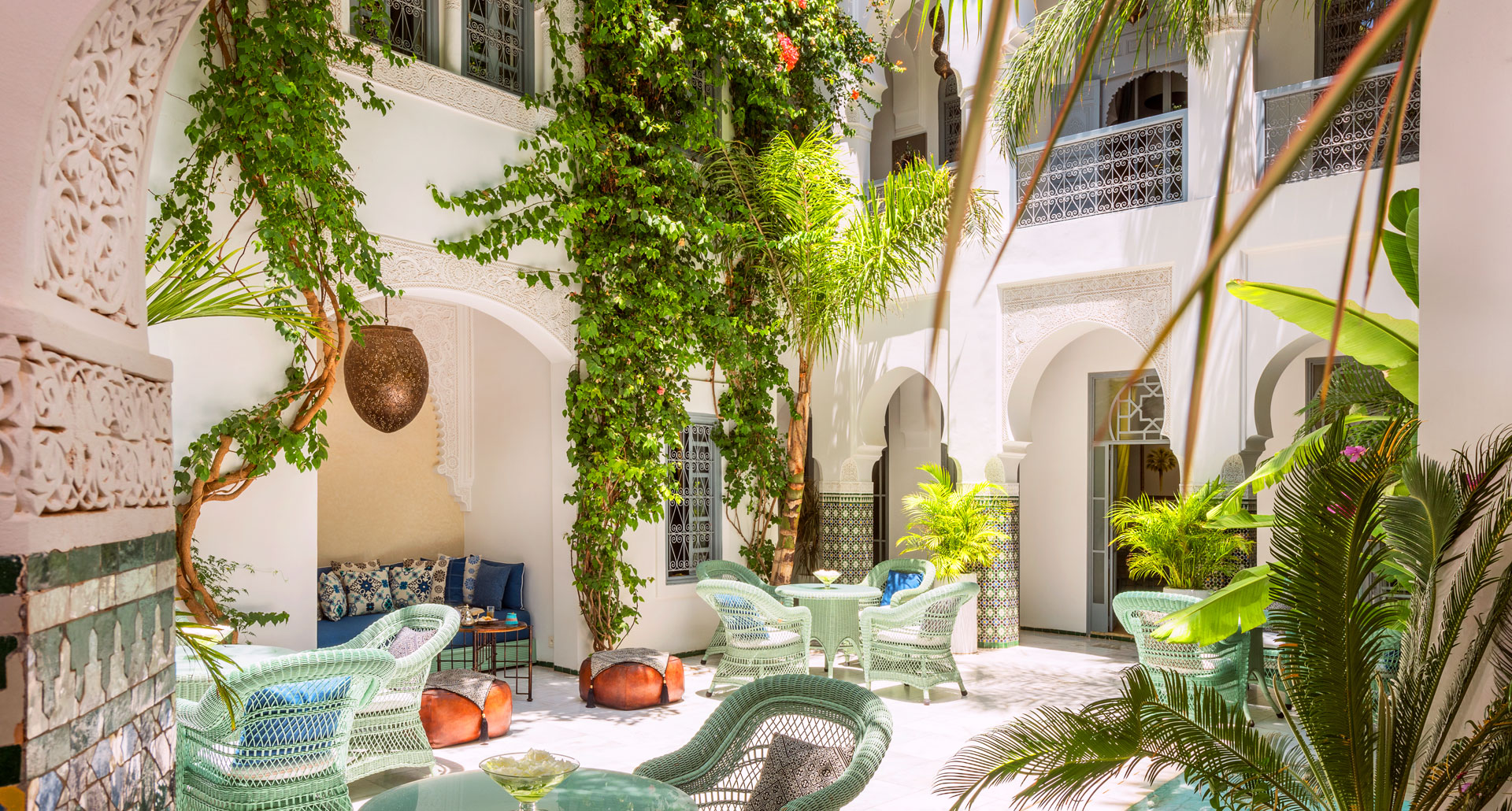 Marrakech, at first glance, has more than enough excellent riads already. But when the room counts measure in the single digits, you need a lot of options on your list. And no matter how many are in your regular rotation, you can find room to add Riad Idra. With just seven rooms and suites it’s as intimate as can be, and though it’s absolutely central, just a few minutes’ walk from the Ben Youssef Mosque and Jamaâ el Fna Square, it’s got that secluded inner-circle private-retreat vibe down pat. 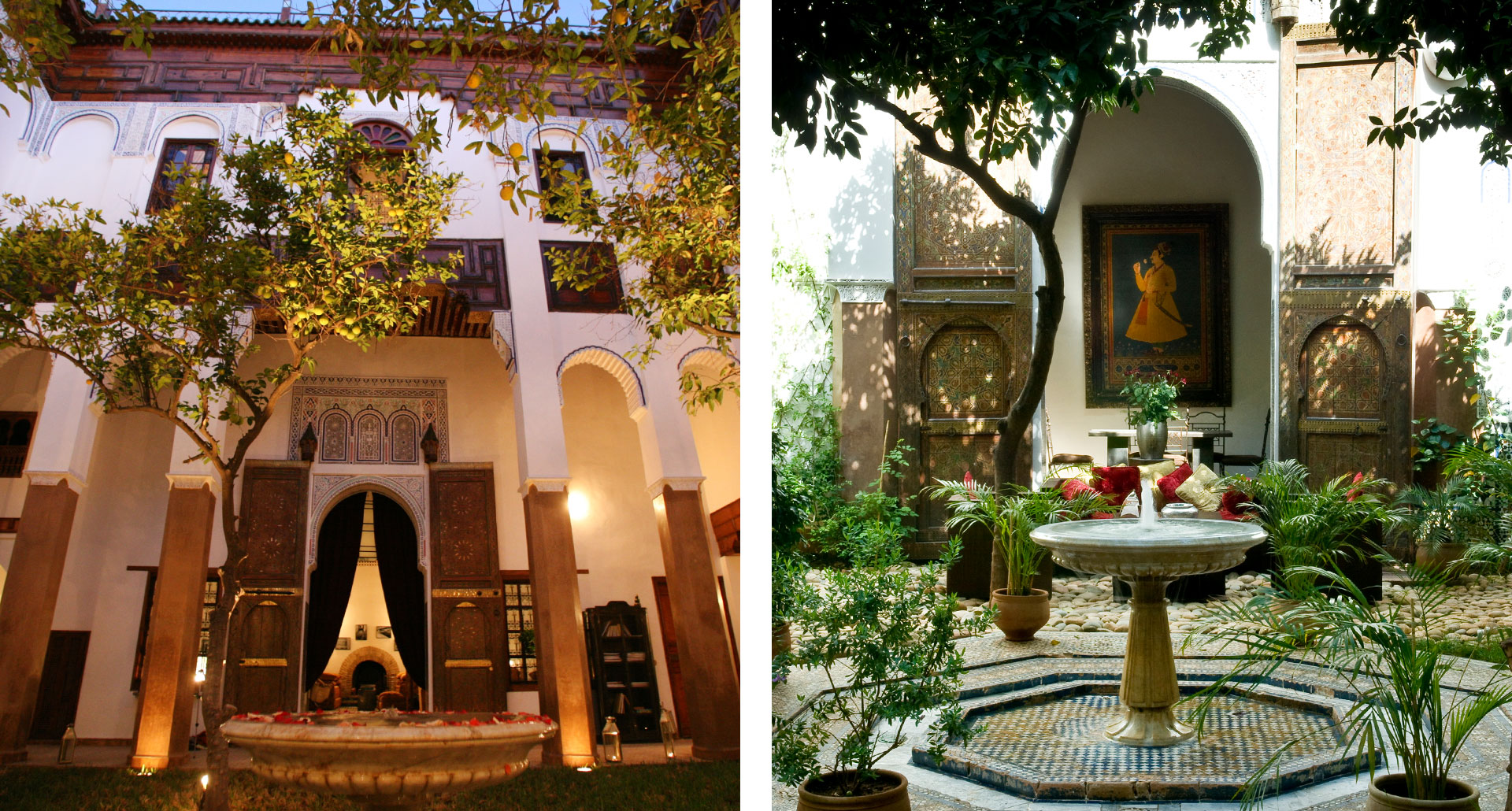 Like many classic riads, Riad Laaroussa’s recent renovations have brilliantly restored the captivating Moorish visual appeal and storybook construction details of this 17th-century landmark. Slow, majestic, almost preserved in amber, it strikes an expert balance between ritual relaxation and the timeless practice of luxury. 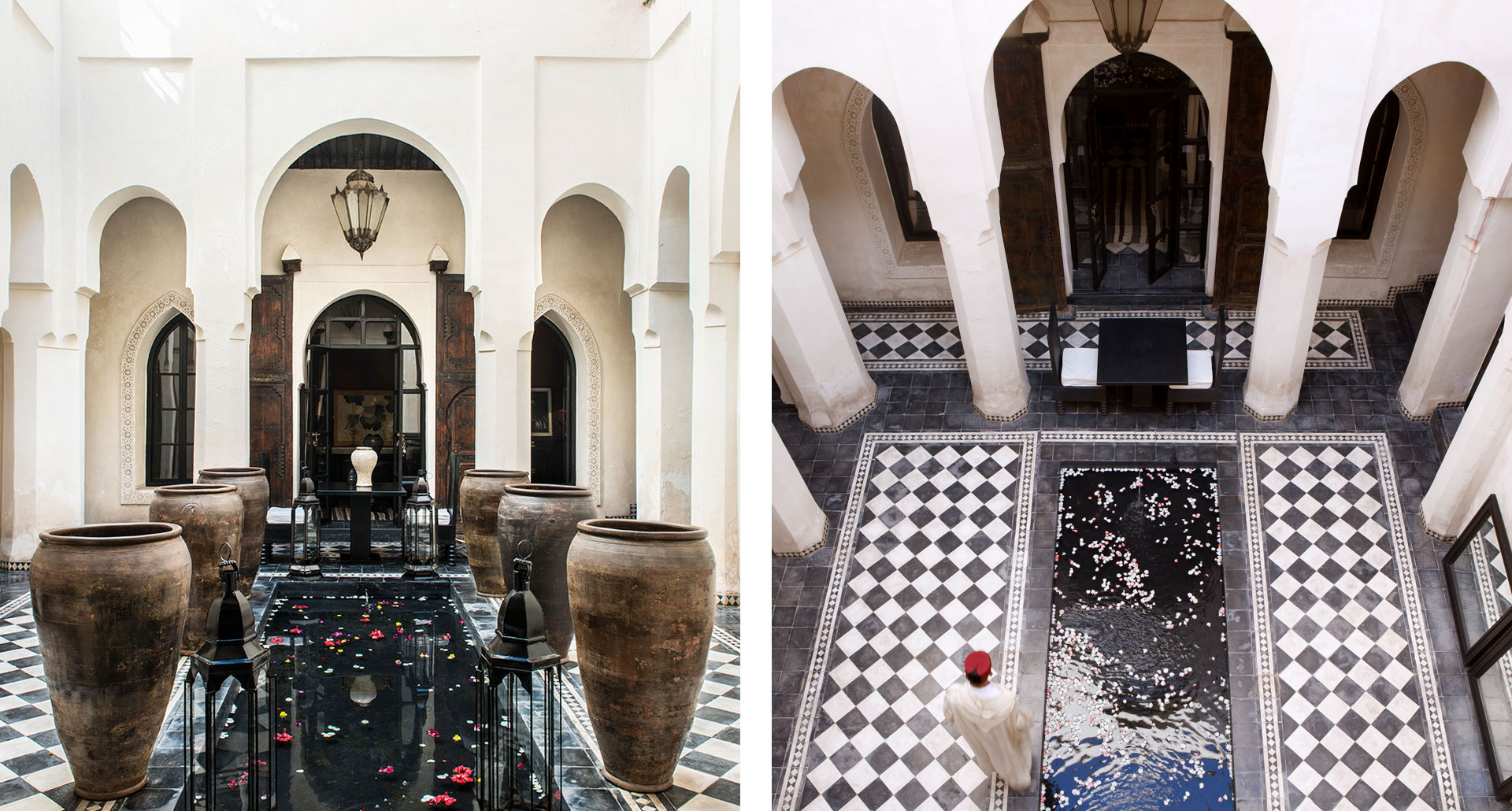 Too often “design” actually seems to mean an absence of design, as though the end goal were to empty the hotel of everything but beds and white walls. You don’t need a designer for that, just some movers. Here, in Dar Darma, is an exception: a riad hotel that’s quite obviously had some designer attention paid to it, and the result is a six-room fantasy that leaves minimalism in the dust. 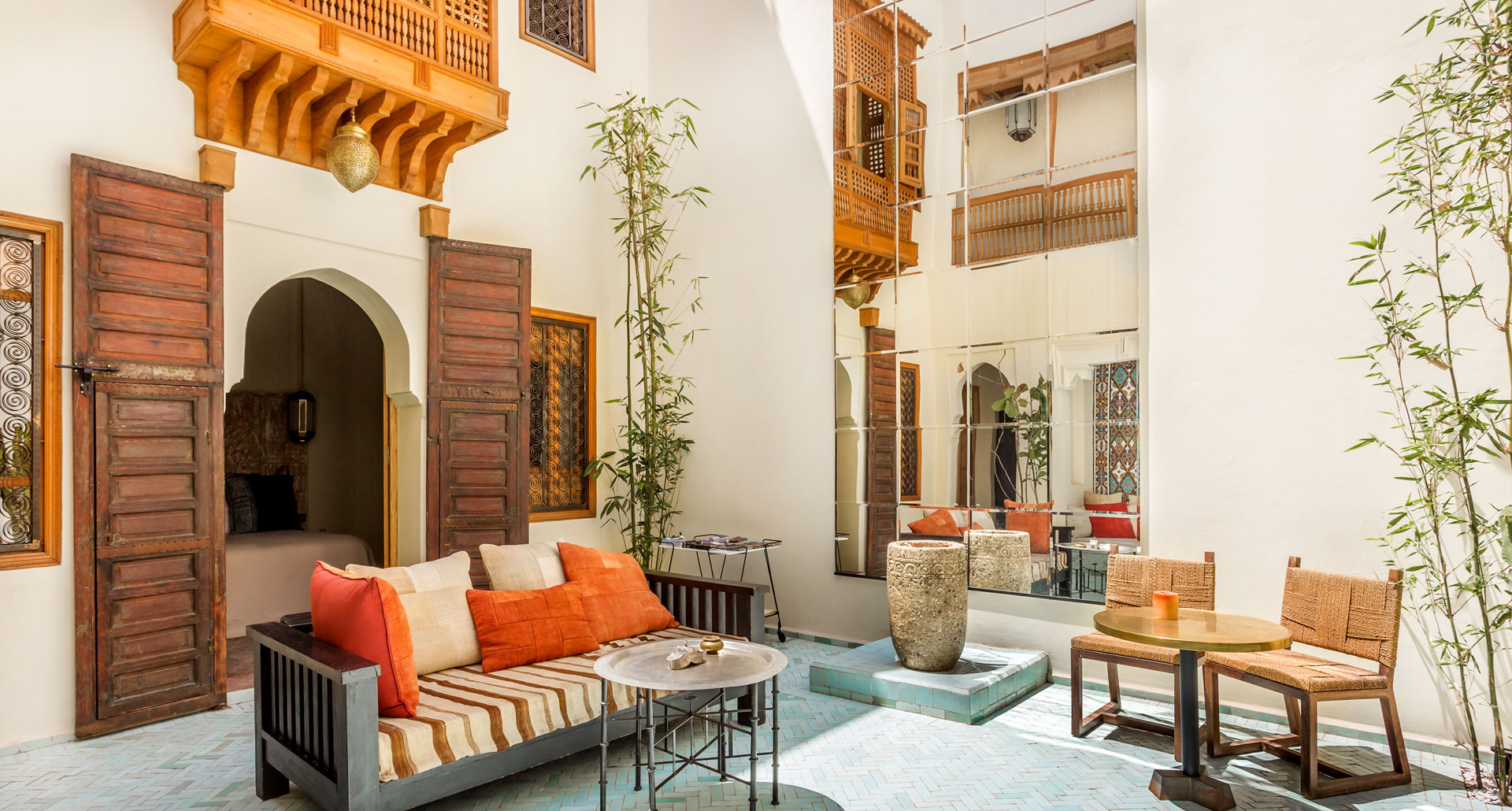 Brighter, sunnier, somehow friendlier than the average riad hotel — maybe it’s the owners, a couple of designers, one Dutch and the other Spanish, but for whatever reason, Ryad Dyor stands out. The medina location and the inside-out riad design mean it’s as private as any, but where many go dark and heavy, this one goes for graphic and sun-drenched, a look that’s probably more accessible than the traditional riad hotel. 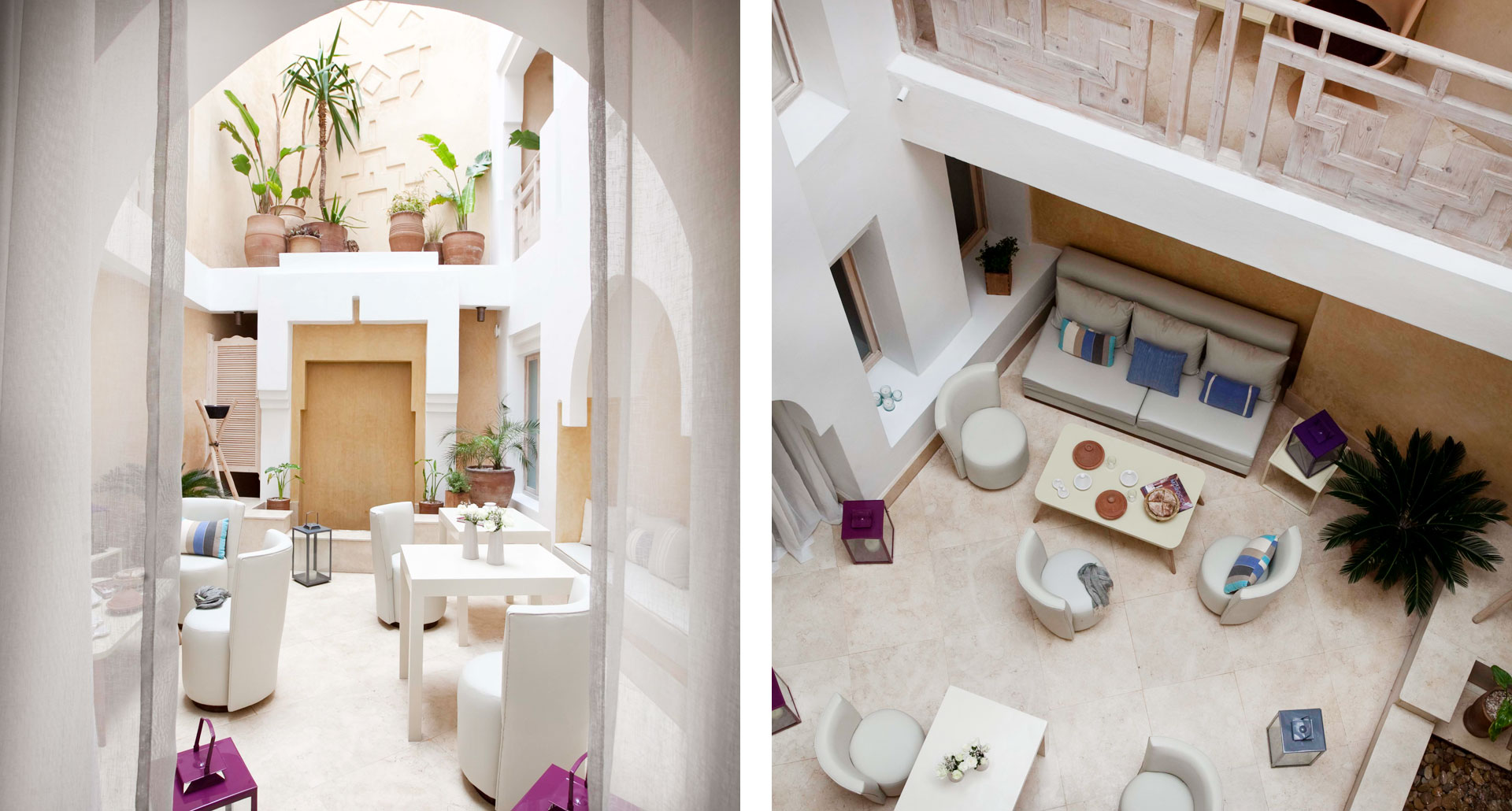 The airy, pared-down rooms at Dar Maya are a breath of fresh air, both proverbial and literal. From the moment you arrive, greeted with fresh Moroccan pastries and a cool drink, Dar Maya’s soothing, laid-back hospitality begins to take effect, producing an easy calm that seems to wash over the entire coastal city of Essaouira. 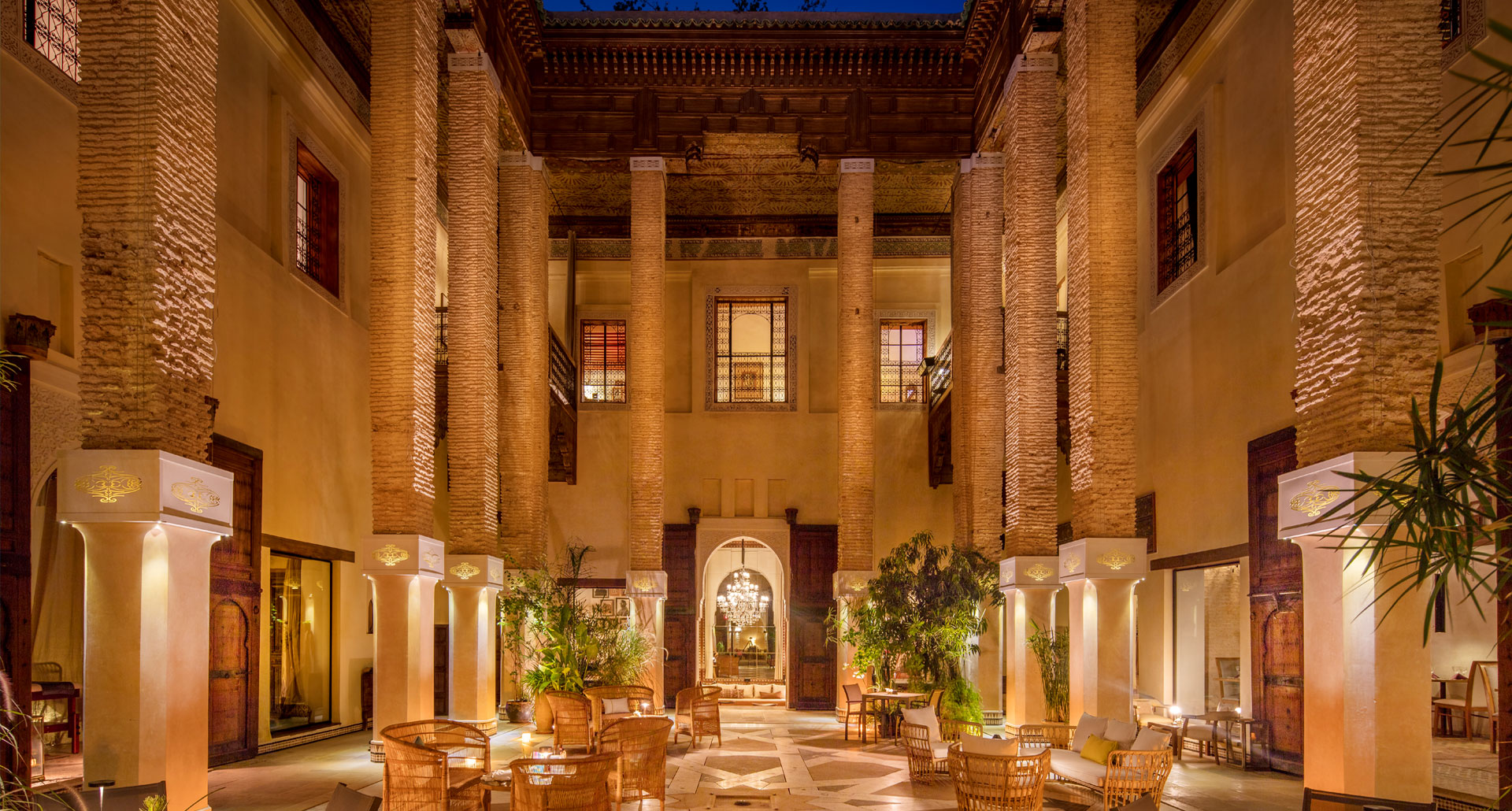 Even in Fès, the city that invented and perfected the riad form, Karawan Riad somehow manages to distinguish itself. That may be due to its former incarnation as a 17th-century Maqfia harem-palace, the illustrated picture of otherworldly Ottoman elegance. Yet even though we’d never blame such an establishment for resting on its Andalous-Quarter laurels, a decade of renovations has proven that this jewel rests in the hands of forward-thinking proprietors.