The Brutalist architecture movement of the 1950s and 60s grew out of “béton brut,” the French idea that concrete in its raw, unfinished form is a powerful expression of beauty. Quite a few modern hotels agree.

The French term béton brut was coined by the legendary modernist architect Le Corbusier. It translates to “raw concrete” and it describes, not the material specifically, but rather the imperfect expression of the material: the seems and resultant textures left behind from molds and formwork. Béton brut helped give birth to Brutalism, a style of mid-century architecture known for its generous use of concrete, and controversial for the imposing, almost institutional feeling of its geometric designs.

30 years ago, it probably seemed a safe bet that Brutalist architecture would be one of those things that didn’t come back in style. But as Springsteen sang, “maybe everything that dies someday comes back,” and fans of Tablet know that to be especially true when it comes to hotels. Cutting-edge boutique hotels are constantly competing with each other for your business, but also for your imagination. Just like any other type of art, they are always on the lookout for what hasn’t been done yet — or, in this case, what hasn’t yet been repurposed from the past.

Unlike the Art Deco revival, hotels are not using concrete sparingly, nor are they hiding it. Some are using it for the floors, the ceilings, the walls, and even the furniture. Some are peeling back a building’s ornamental layers to expose the not-meant-for-public-consumption concrete that lies behind. Some are setting up shop in old Brutalist landmarks, others are creating new ones of their own.

Concrete is raw, it’s powerful, it’s also low-maintenance, non-combustible, water-resistant, and has quickly become a material of choice for hotels like the fourteen below. 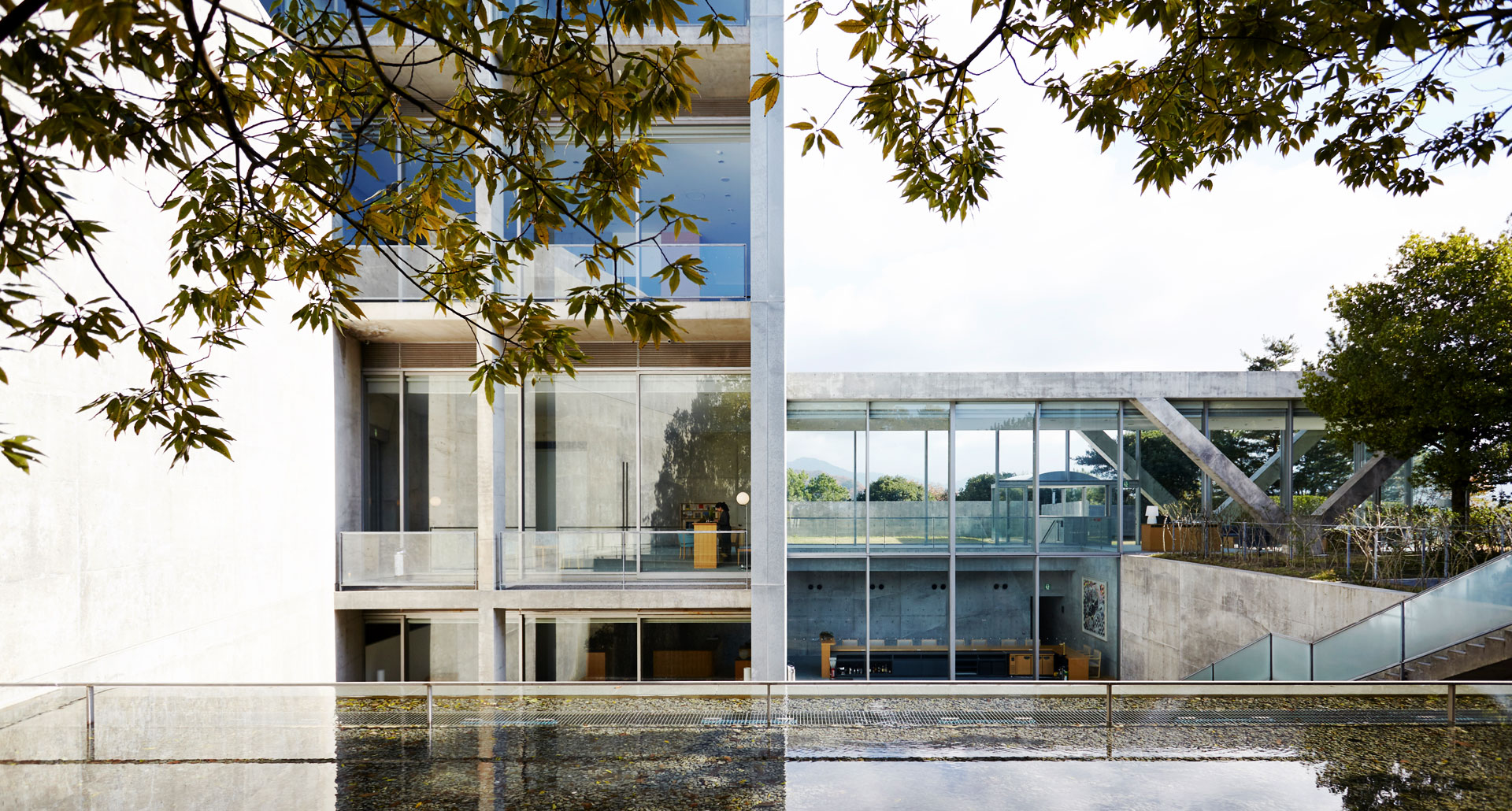 Architect Tadao Ando’s masterful eye informs every inch of Setouchi. In his hands, concrete becomes paradoxically weightless. He coaxes an incredible softness and smoothness from the material, with results that rival the warmth of traditional wooden construction. 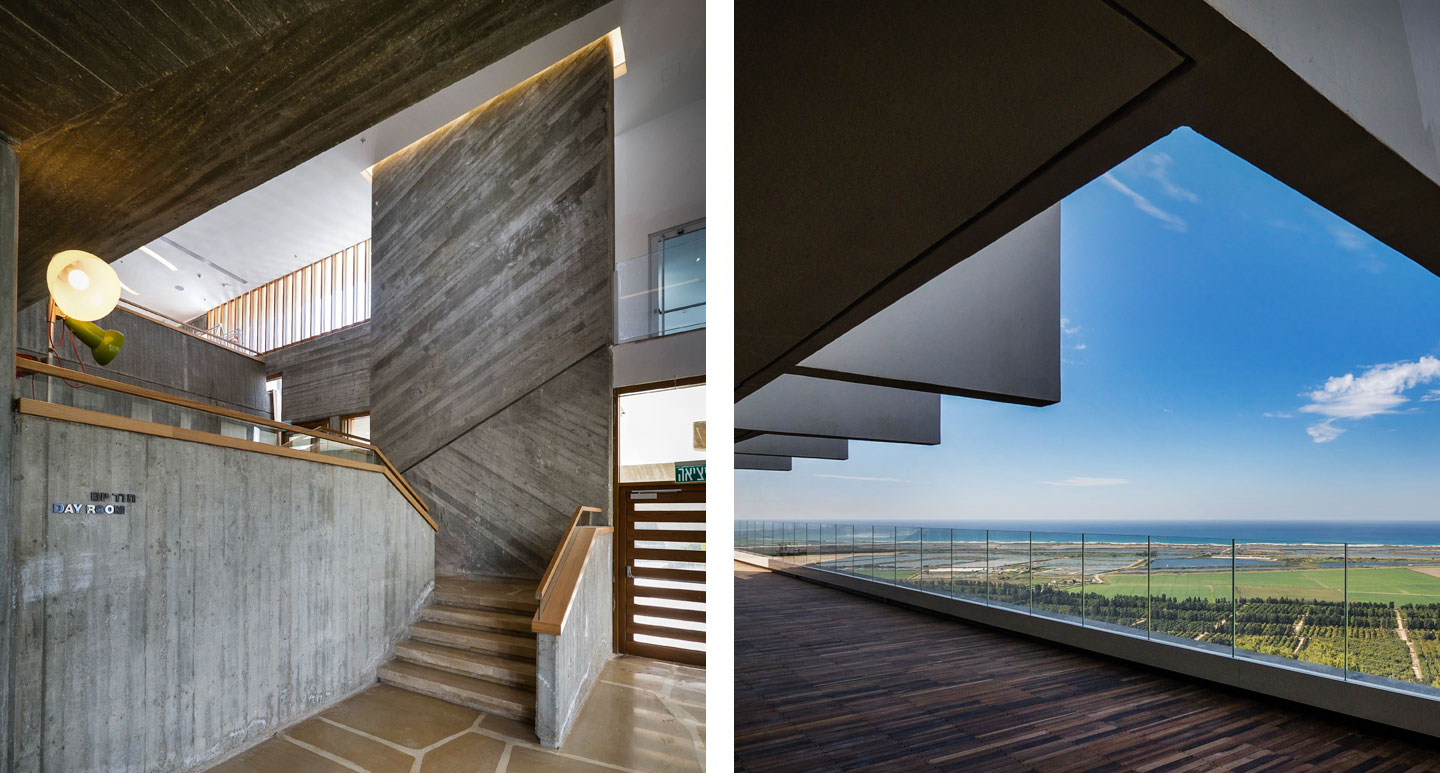 The Mivtachim Sanitarium is a 60s Brutalist landmark that snakes along a hilltop overlooking the Mediterranean Sea. In 2015, it became the Elma, a cultural center and ultra-modern design hotel that frames the building’s original board-formed concrete surfaces in fresh and exciting ways. 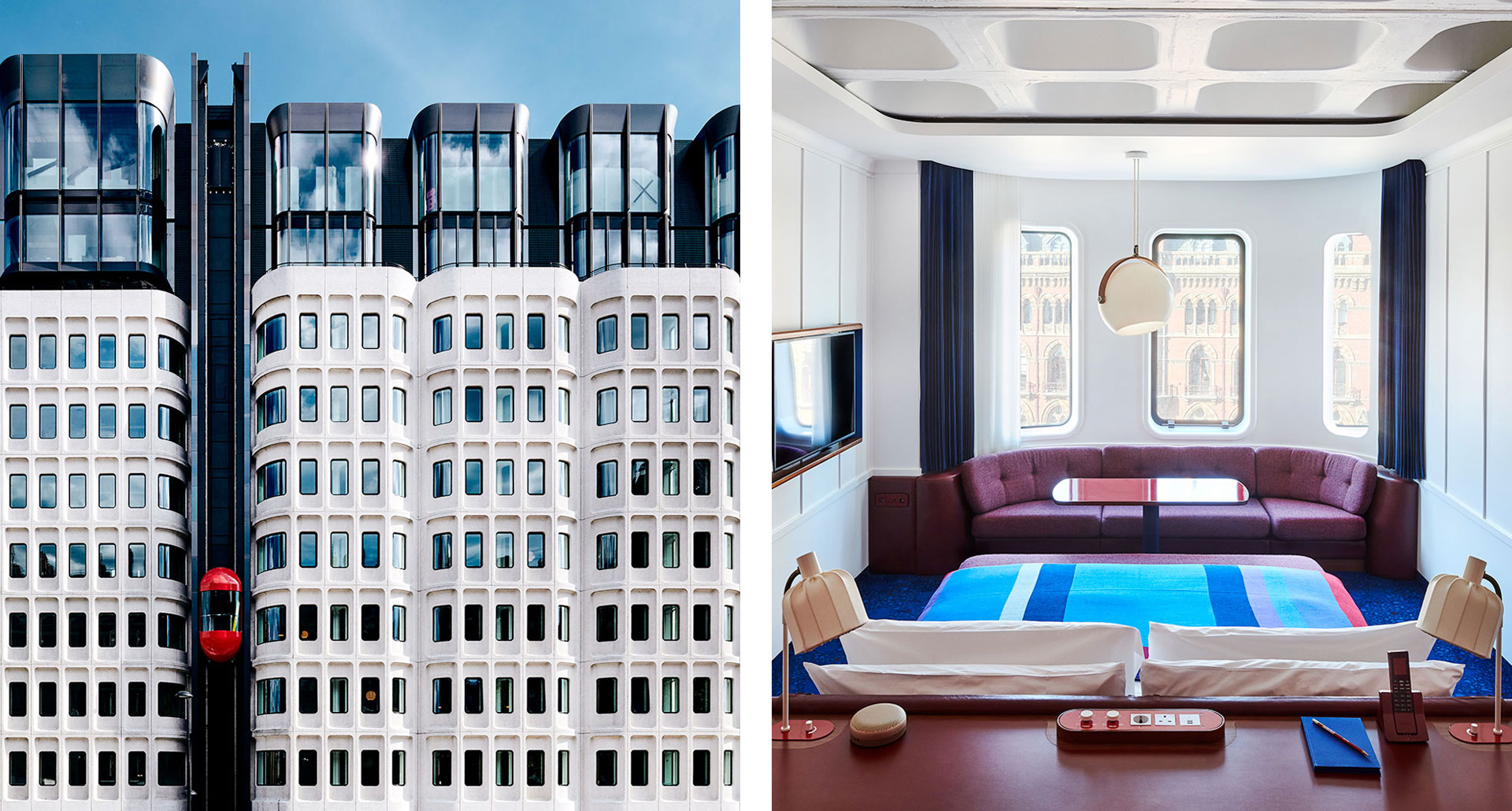 The Seventies-era Camden Town Hall Annexe in King’s Cross has lived long enough to evolve from an architectural pariah into something precious. After a number of developers came close to demolishing it, in swooped the Standard hotel group, who rightly saw a bit of their own aesthetic reflected in its orderly Modernist geometry. 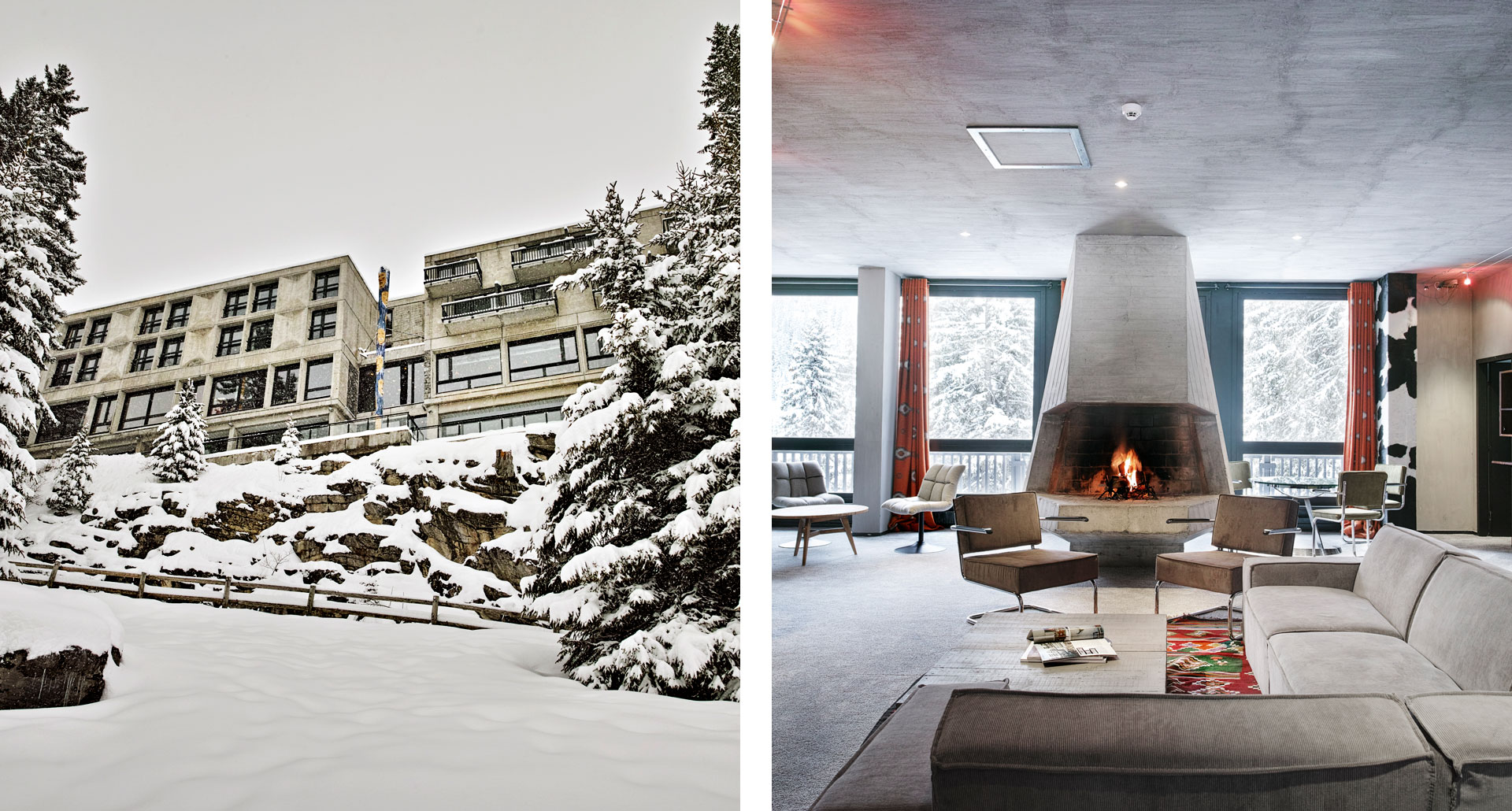 The 1960s-vintage Totem is an authentic example of Brutalist concrete architecture. Forget about the woodsy charm of the classic Alpine lodge: inside, the look is coolly industrial, with colorful woven rugs, animal fur throws, and crackling fireplaces to warm up the concrete modern interior. 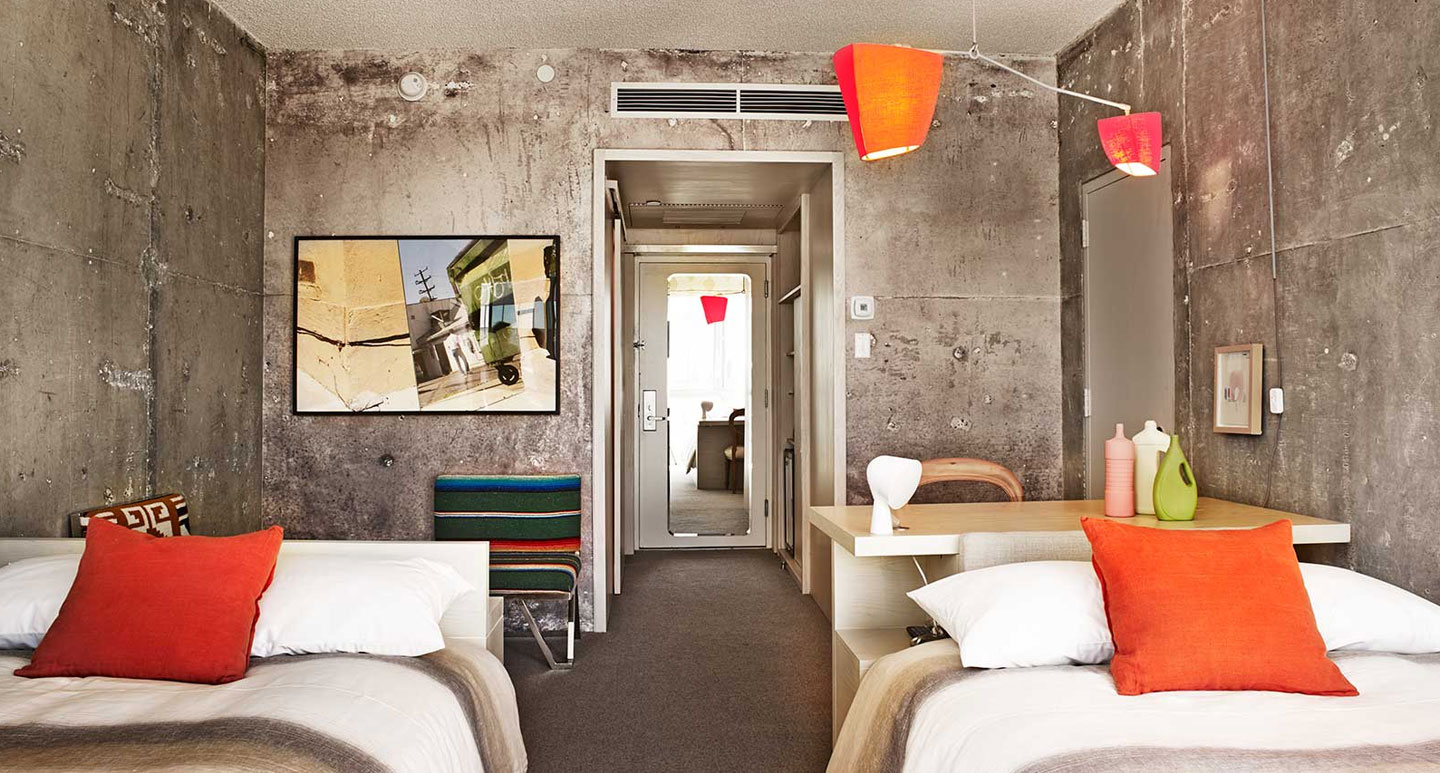 The LINE strips an undistinguished mid-century chain hotel down to its raw surfaces, revealing a rugged beauty beneath. The interiors, by local designer Sean Knibb, contrast concrete and hard-edged modernist geometry with contemporary colors, unique furnishings, and a surprising amount of plant life. 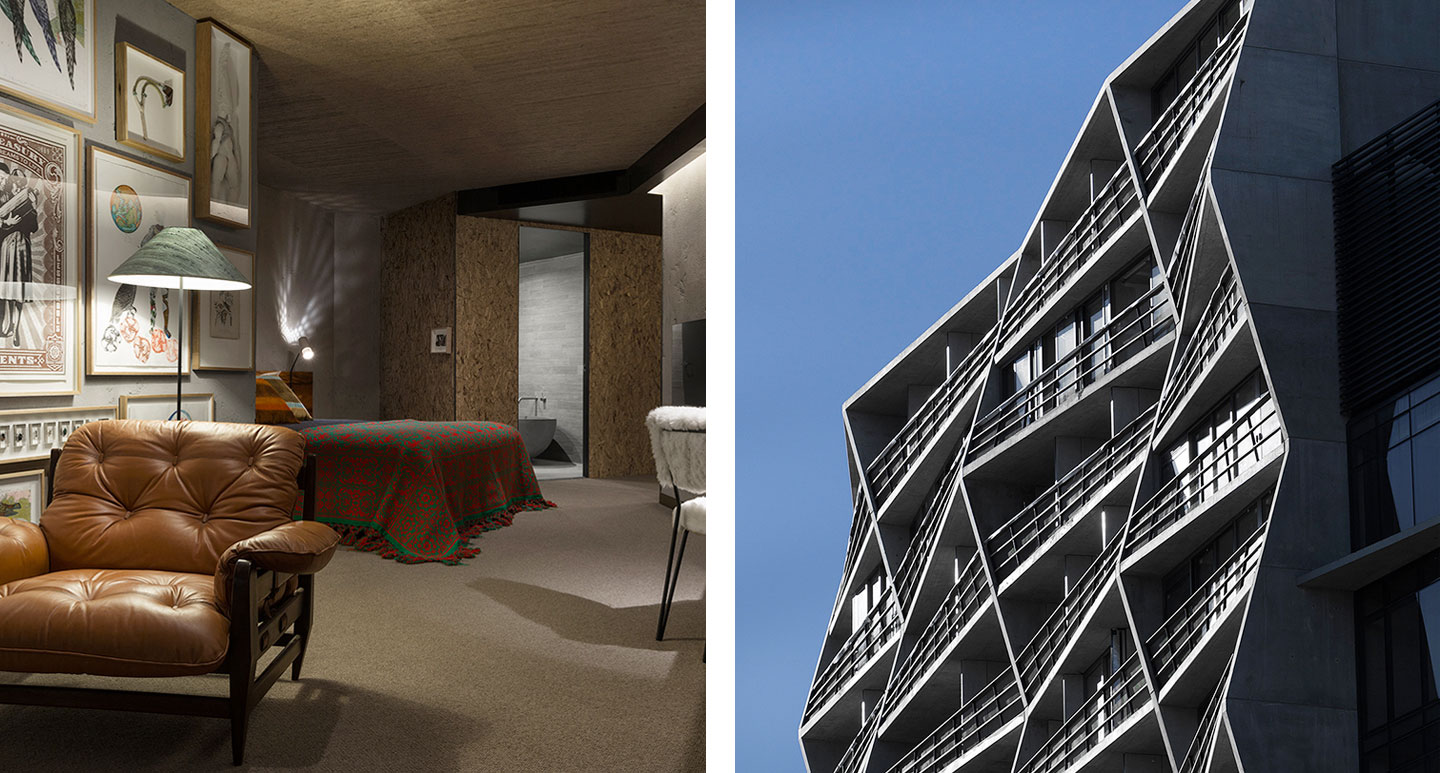 Ovolo Nishi occupies three floors of the concrete-clad Nishi building, which is by some distance the most memorable landmark in Canberra’s emerging cultural district of New Acton. The rooms follow suit and go all-in on organic warmth, full of reclaimed wood, roughly textured concrete, and restored vintage furniture. 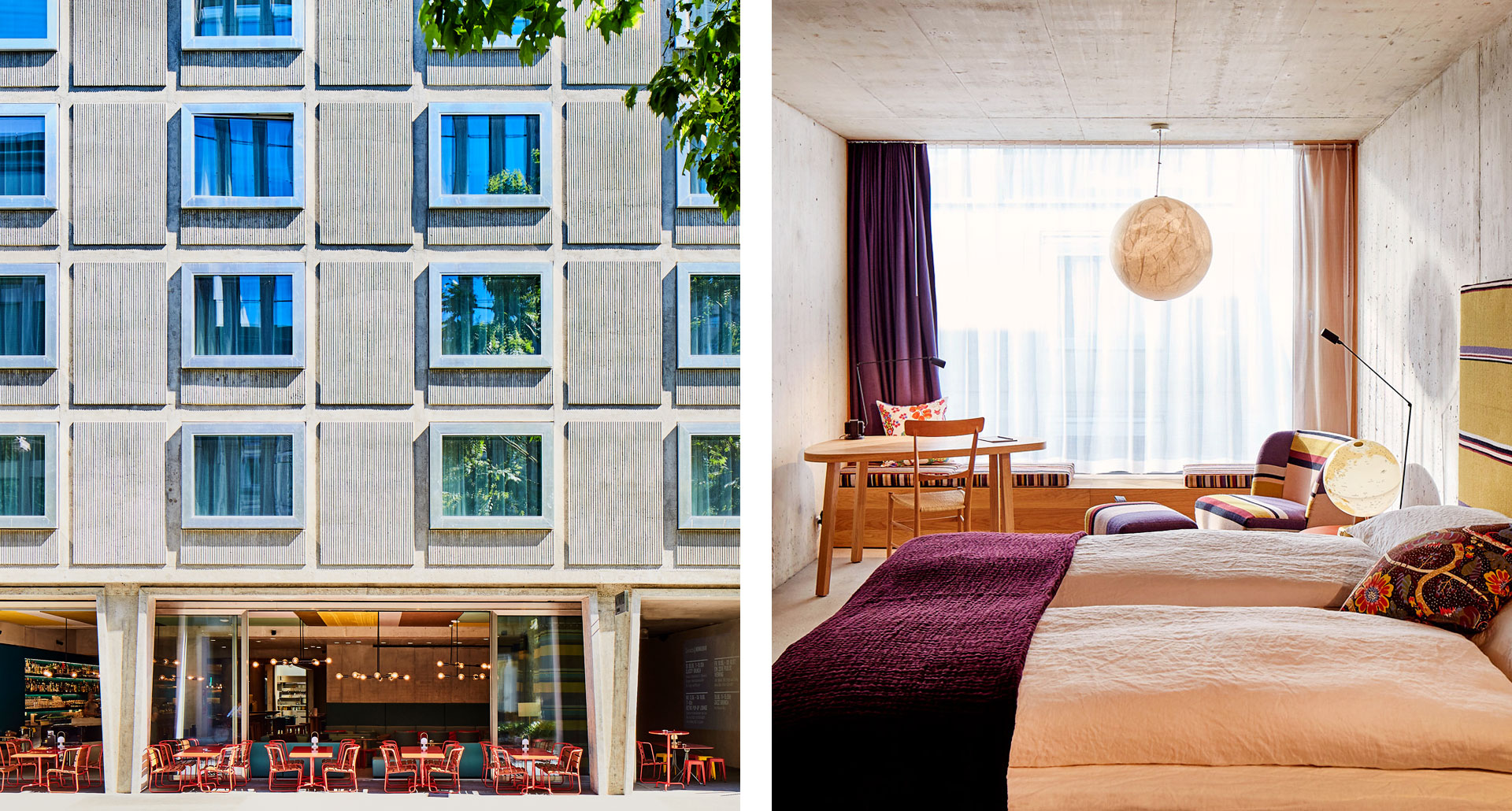 Nomad makes its home in a classic 1950s apartment block, the first ever constructed in Basel, whose distinctive concrete facade has been preserved. And the interiors take off from there, using the raw concrete as a backdrop for a look that’s surprisingly warm, with vibrant pops of color and modernist-inspired furniture. 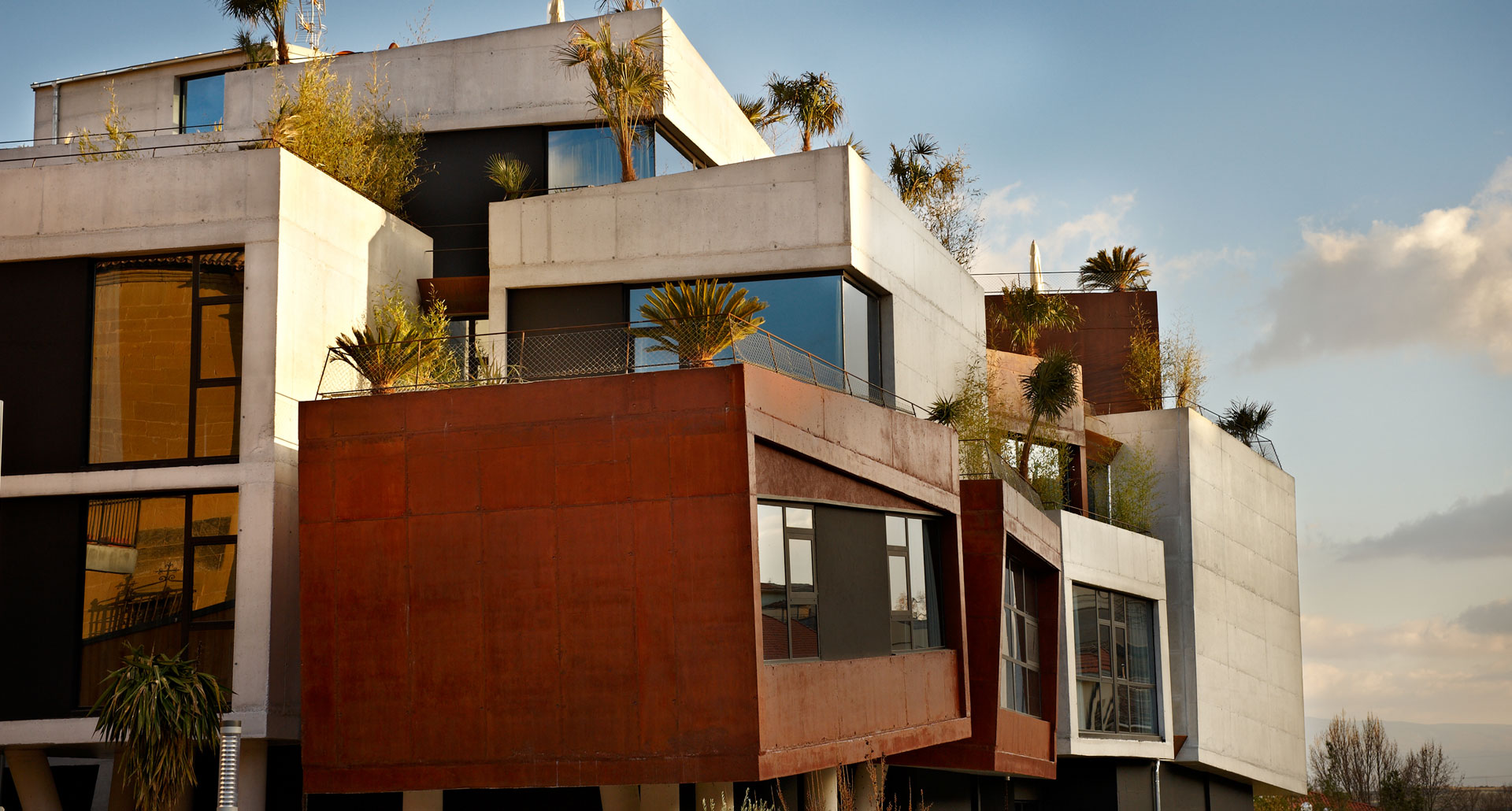 Perhaps the best way to describe Hotel Viura’s slightly disordered pile of glass-and-concrete cubes is to imagine what Picasso would have done were he a Brutalist architect. This precarious-looking cubist stack in a traditional Spanish wine village is audacious in a way we think the great master might’ve appreciated. 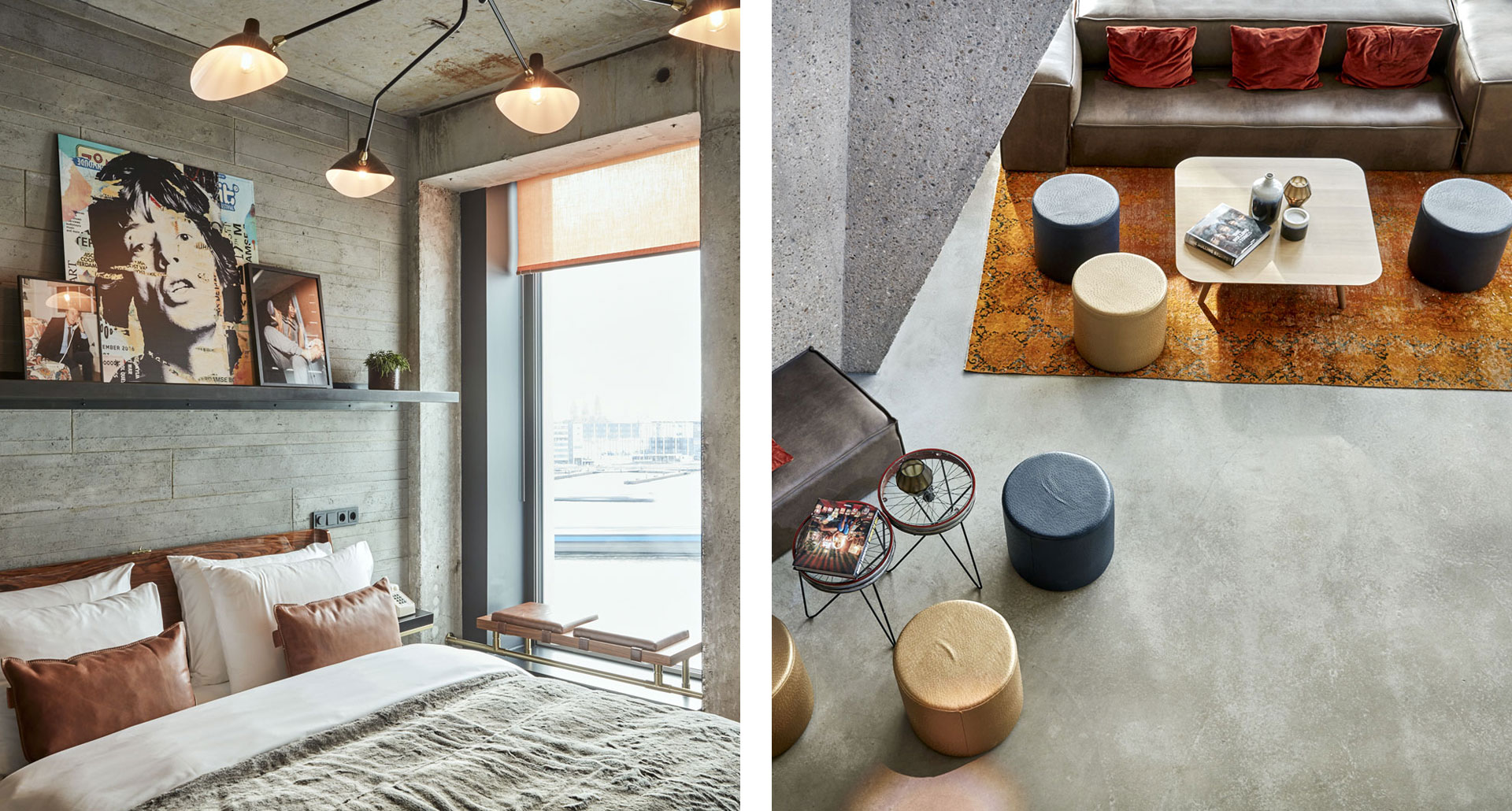 Taking up eight floors of the modernist A’DAM Tower, formerly a Shell office building, the Sir Adam Hotel is not shy about its use of concrete. It’s been exposed in the floors, ceilings, and walls, and provides an appropriately edgy backdrop for a self-described rock n’ roll hotel. 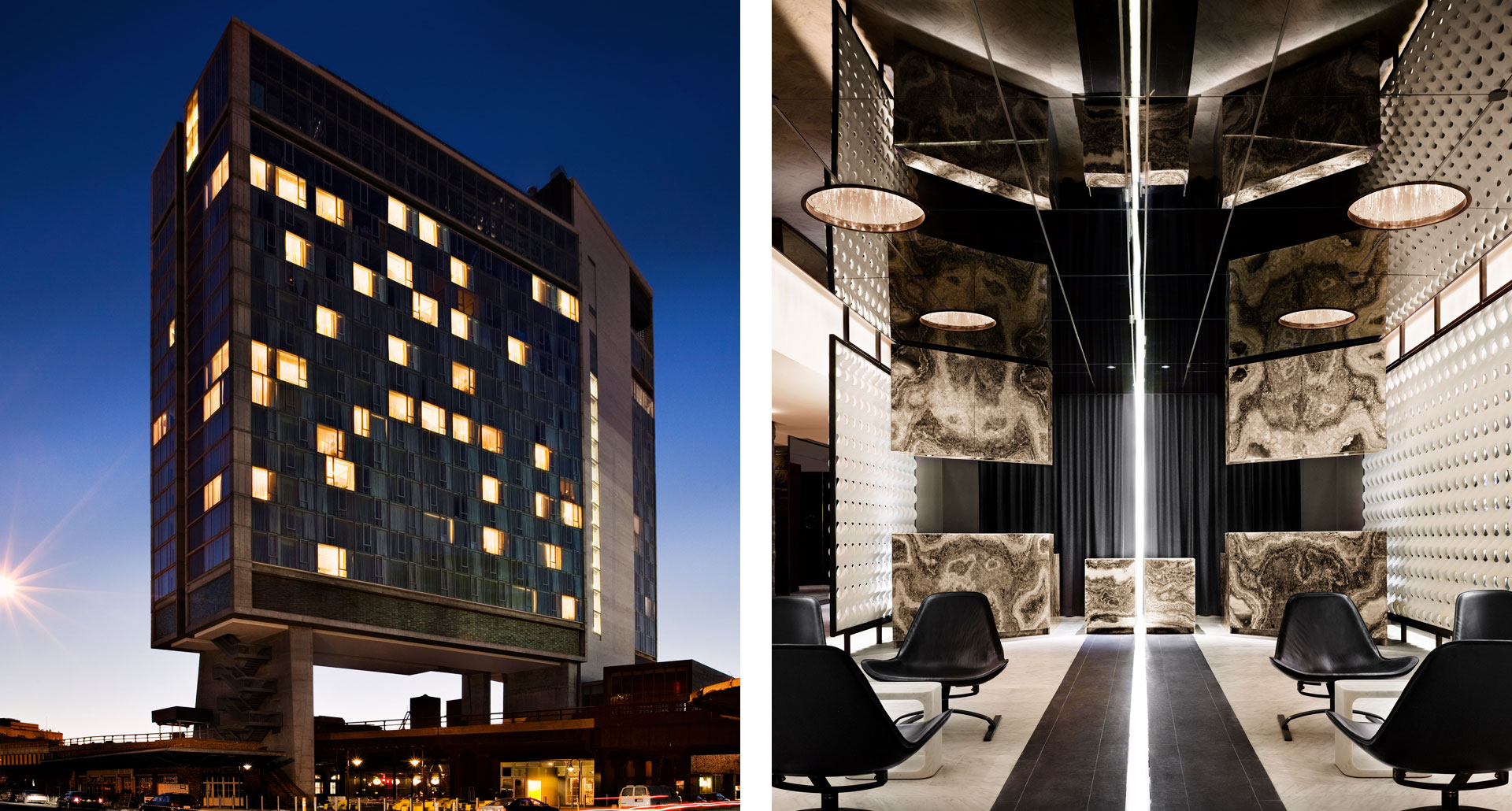 When the Standard High Line was conceived in the aughts, its owners could’ve designed any style of building they wanted. They chose to erect a structure that was undeniably influenced by Brutalist architecture, and their unqualified success almost certainly provided a boost to the movement’s return to prominence. 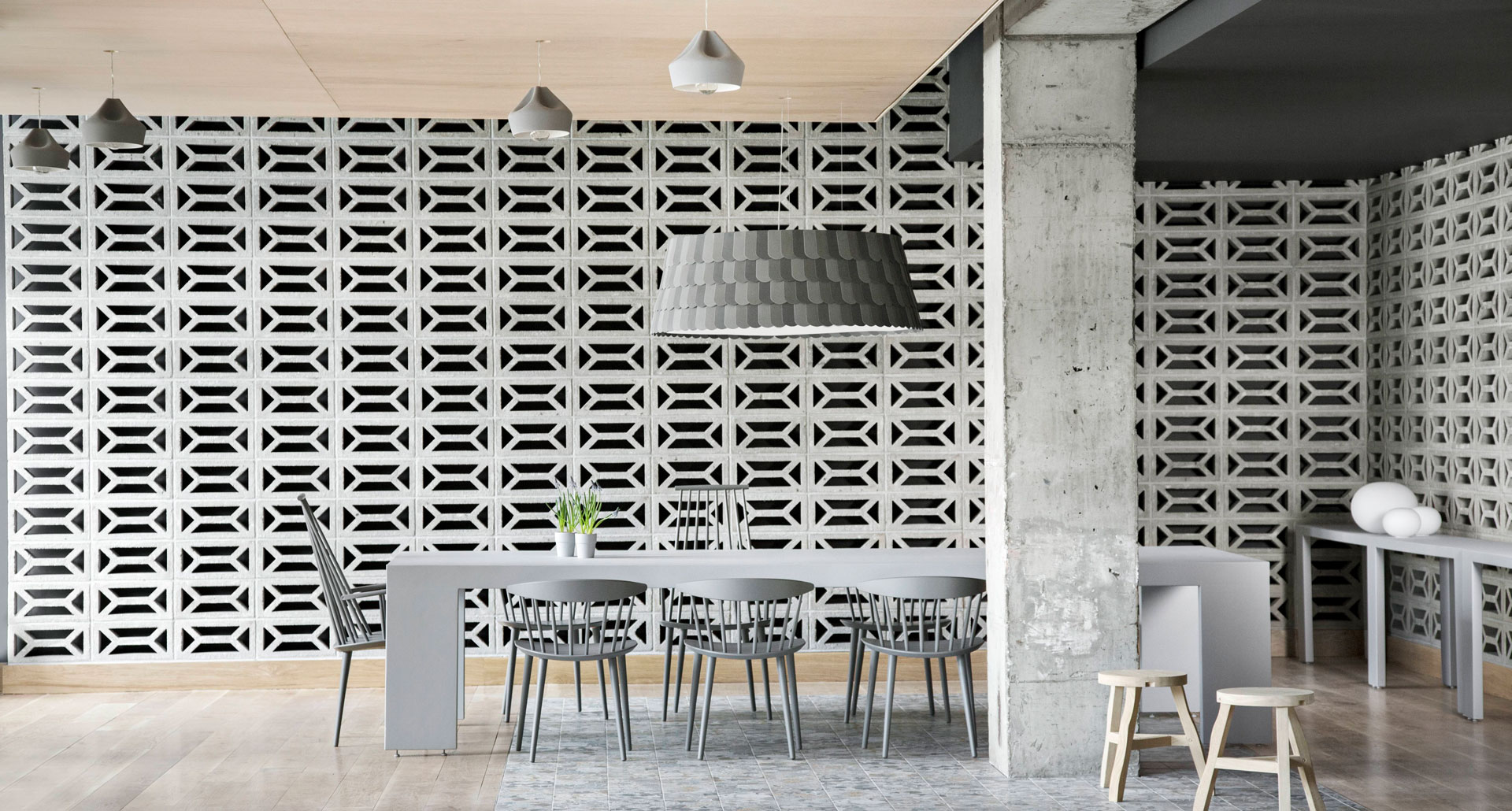 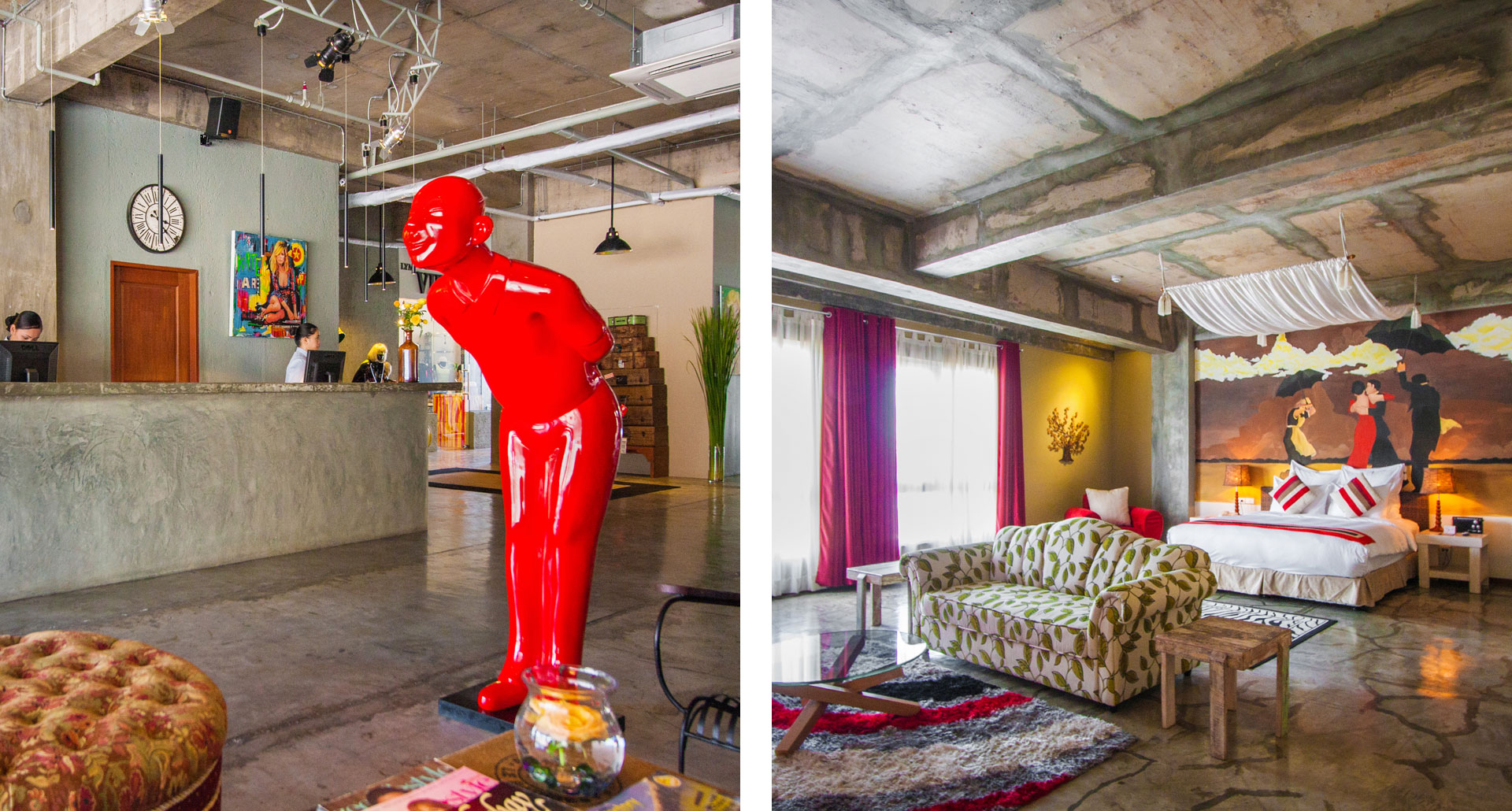 Raw and polished concrete provides a minimalist backdrop for the Henry Hotel’s decidedly maximalist interiors. The industrial edge of the bare concrete is livened considerably by a riot of colorful accents and a selection of art that’s street-inspired. This is pop hospitality, accessible rather than elitist, welcoming rather than standoffish. 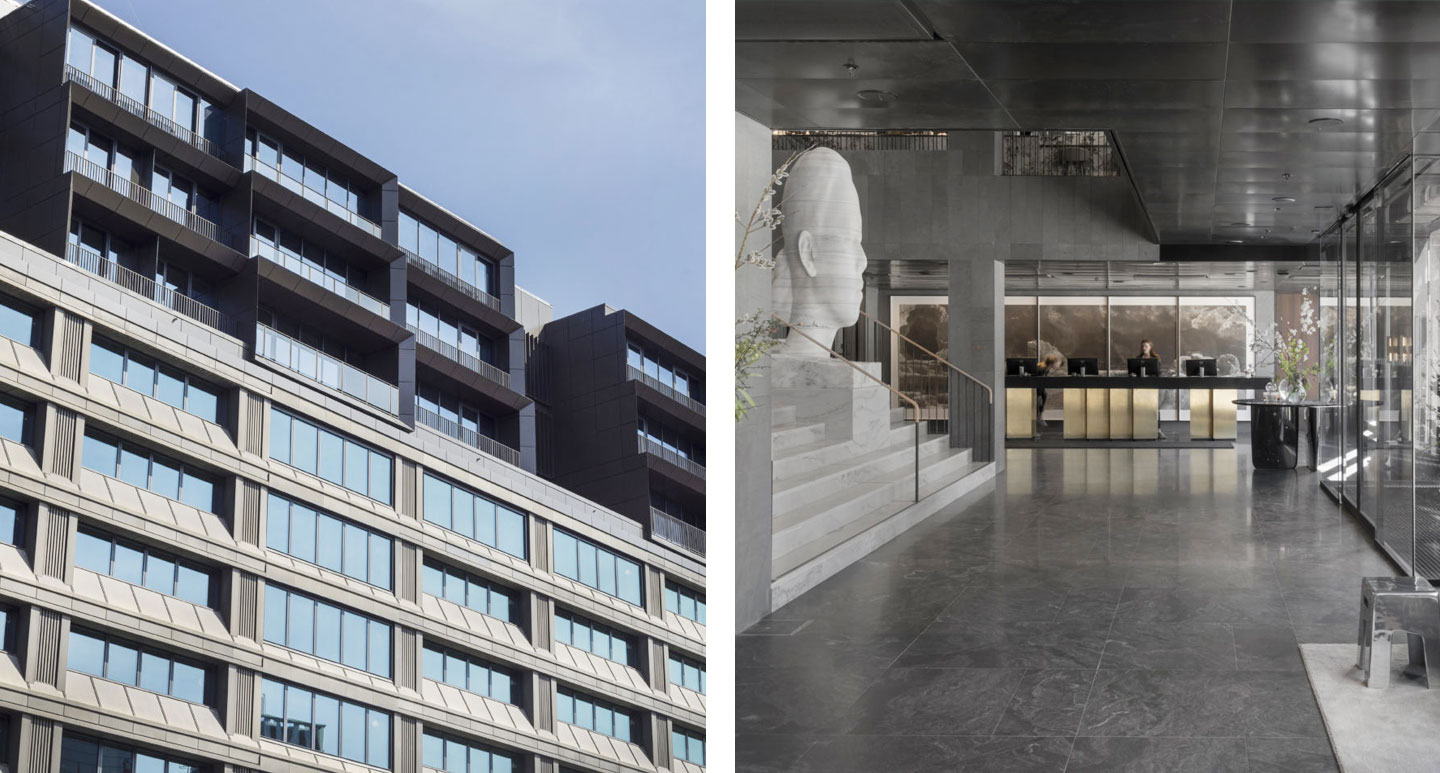 Hotel Six is the modernist paradise you’ve always expected from the Scandinavian boutique-hotel scene. At Six is part of the redevelopment of Brunkebergstorg Square, whose Sixties Brutalist style has come back around from retro curiosity to contemporary inspiration, and the interiors, by Universal Design Studio, show the way forward. 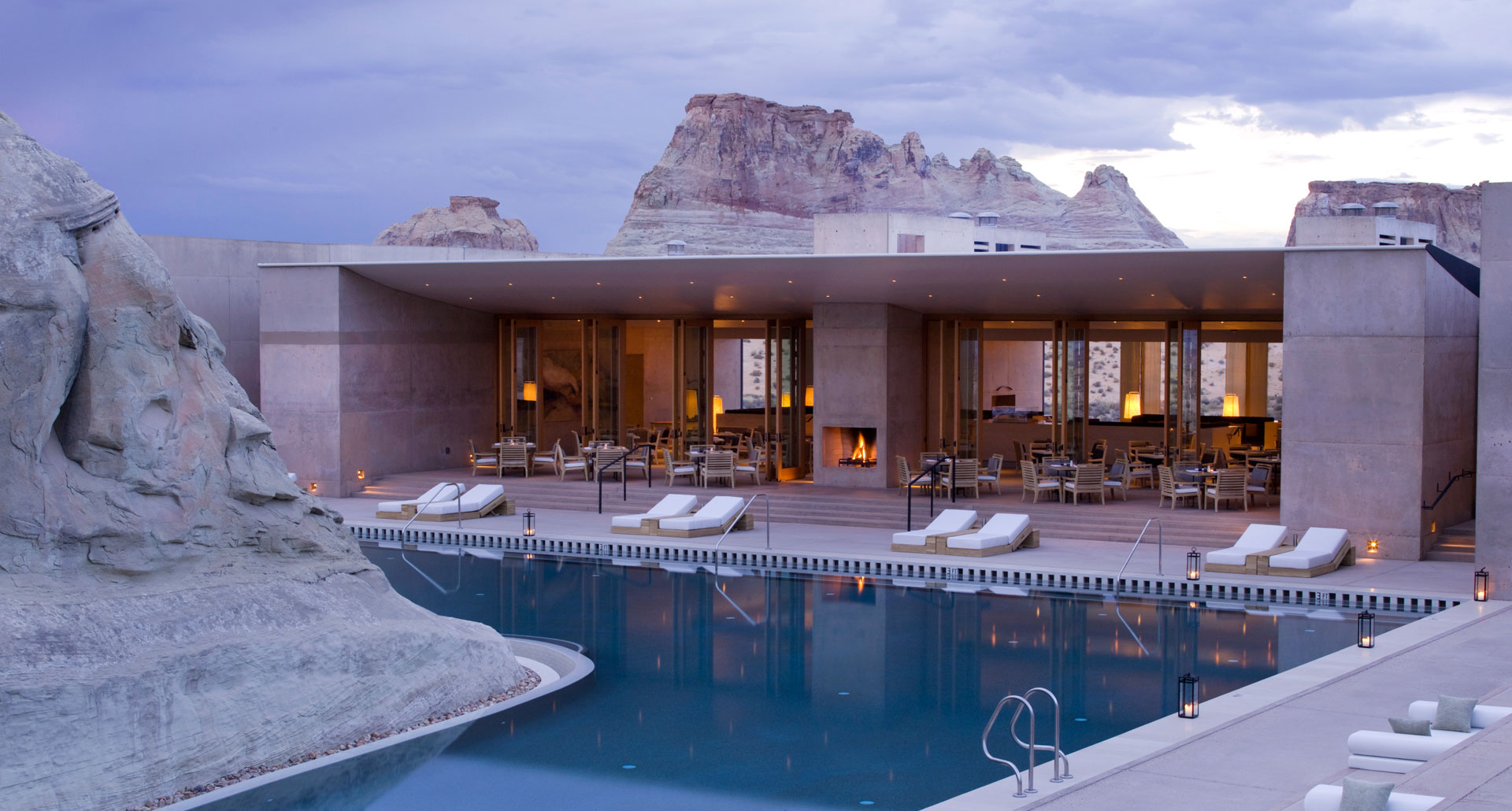 To learn more about Brutalism, we recommend the Atlas of Brutalist Architecture from Phaidon books — chosen by the New York Times as the Best Art Book of 2018.