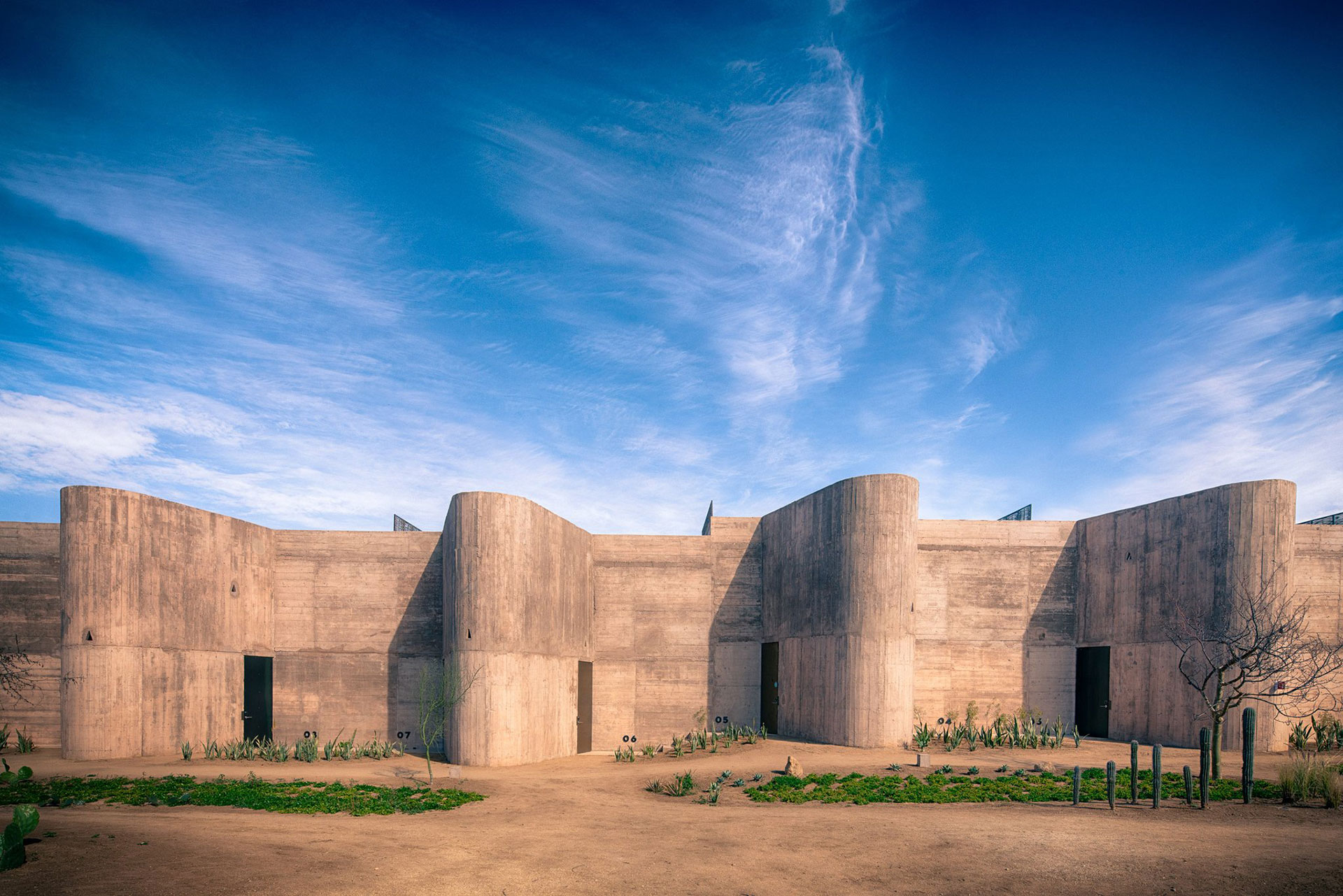 The holiday season has begun. Growing up in New Jersey, my favorite version of the holidays was the one in those old Corona commercials, where a strand of colored Christmas lights adorn a palm tree in some tropical locale. It was my first taste of something different from the winter wonderland images I was used to seeing, with reindeer and mittens and snug scenes in frosted windows. We covered that cozy ground in our recent story about ski hotels in the French Alps. Here, we’re going in the opposite direction and having a look at hotels in the desert.

It’s ironic, isn’t it? Deserts are synonymous with emptiness, isolation, hostility. Yet some of the world’s most beautiful, most desirable hotels overlook its barren landscapes. There’s an inherent drama to all that nothingness — there’s also a lot less snow. You know what’s better than a fresh snow? Not having to deal with it the next day. The cleanliness of the desert is a thing to aspire to. So is the relative lack of civilization.

I probably sound like a grinch, or just someone who lives in a major metropolitan area. I love the holidays. As far as I’m concerned Christmas lights can’t go up early enough. Start that jam in September if you ask me. But as I prepare for another winter in New York City — with the melting and freezing, melting and freezing, melting and freezing — I long for the dry desolation of the desert. Fortunately, I don’t have to look too far to get my fix. We’ve always had an affinity for desert hotels, smitten by how they contrast the divine work of humanity with the near-total absence of humans.

Longtime readers will recognize a number of the properties below. They are places we come back to again and again. Places our minds drift to every time we step in another icy puddle that was way deeper than it looked.

Happy Holidays from all of us here at Tablet. 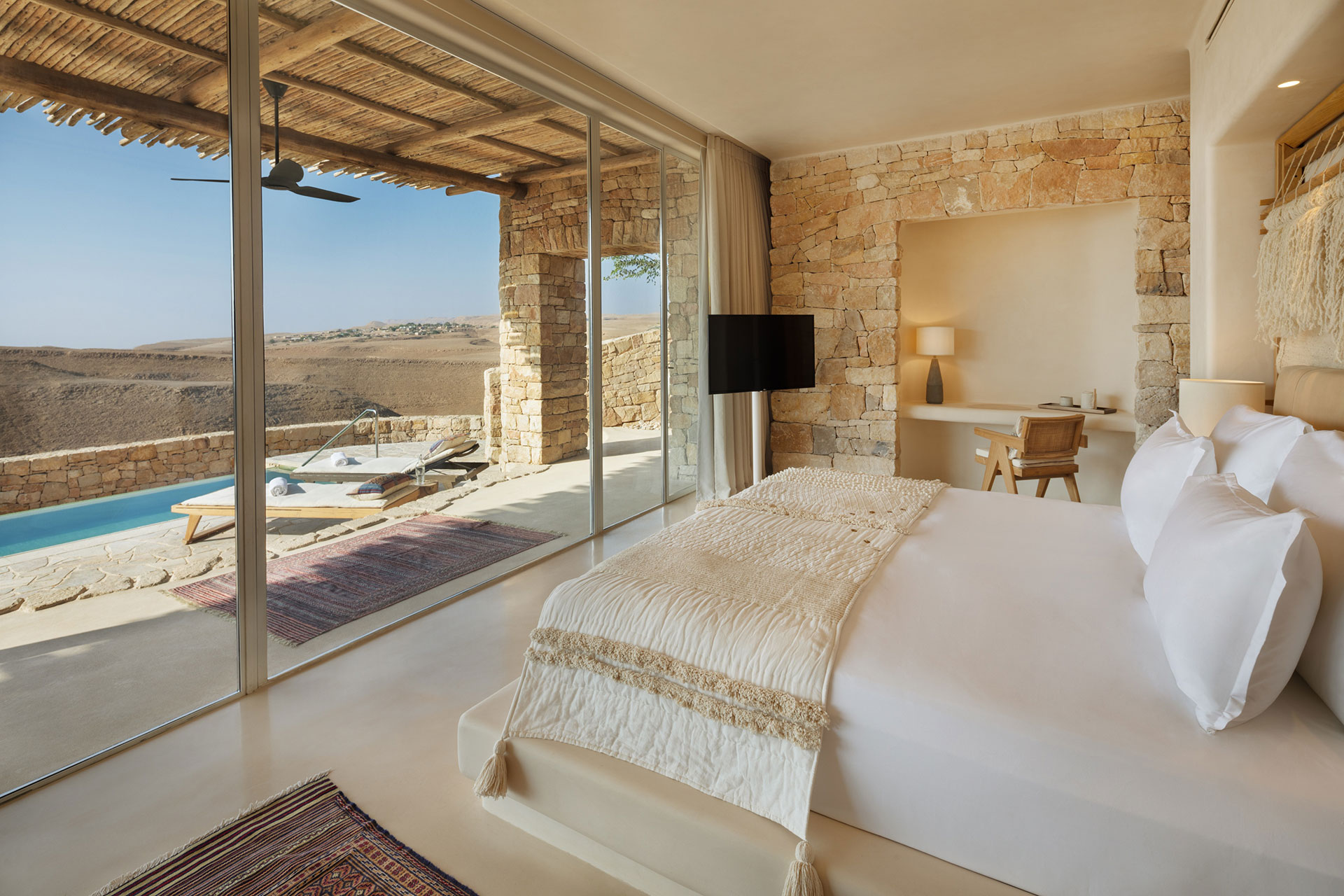 The Negev Desert of southern Israel is the setting for Six Senses Shaharut, whose 60 suites and villas are constructed from rough and rustic stone, timber, and plaster, a style that belies the polished comforts and professional hospitality that lie within. The most basic suites are large and extravagant — though always tasteful — while the villas double in size, and the three-bedroom Private Reserve is the stuff of daydreams. 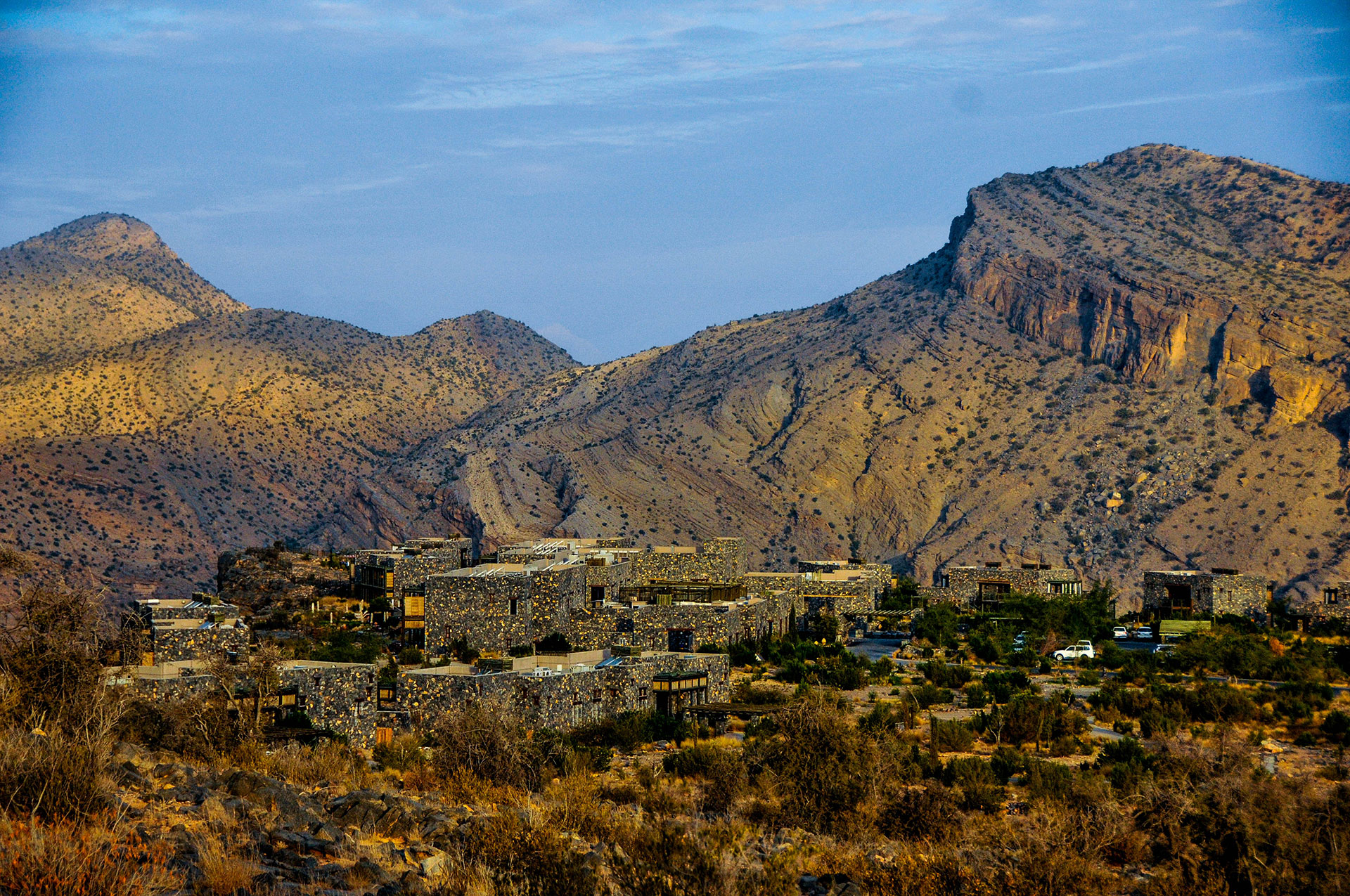 Alila is Sanskrit for “surprise.” And it’s a surprise, indeed, to find one of the Alila group’s impeccably stylish luxury boutique hotels in so remote a corner of the Middle East — Oman’s Al Hajar mountain range, to be exact. It requires some effort to get to Alila Jabal Akhdar, and that’s exactly the appeal. This is not just a boutique hotel with serious design chops: it’s an oasis, secluded and self-contained, with a spectacular spa and an infinity pool that’s perfectly placed for drinking in views of the stark landscape. 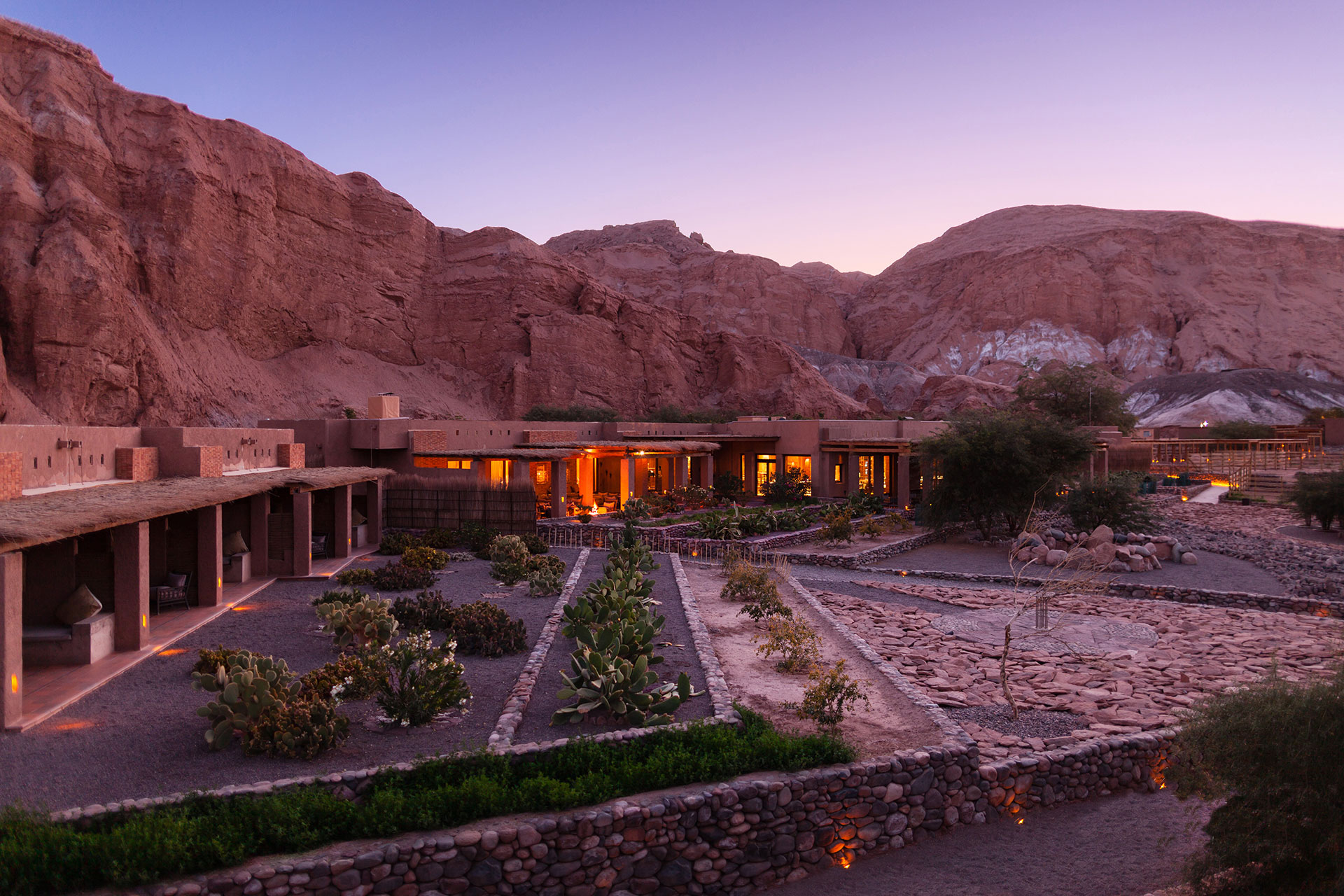 While some other Chilean adventure hotels go in for grand architectural gestures, Alto Atacama’s terracotta lodge was designed to blend in seamlessly with the environment that surrounds it. And when that environment is the otherworldly beauty of the Cordillera de Sal — the red, rugged Salt Mountains — in Chile’s Atacama Desert, the result, as subtle as it is, is one of the most visually striking hotels on the planet. 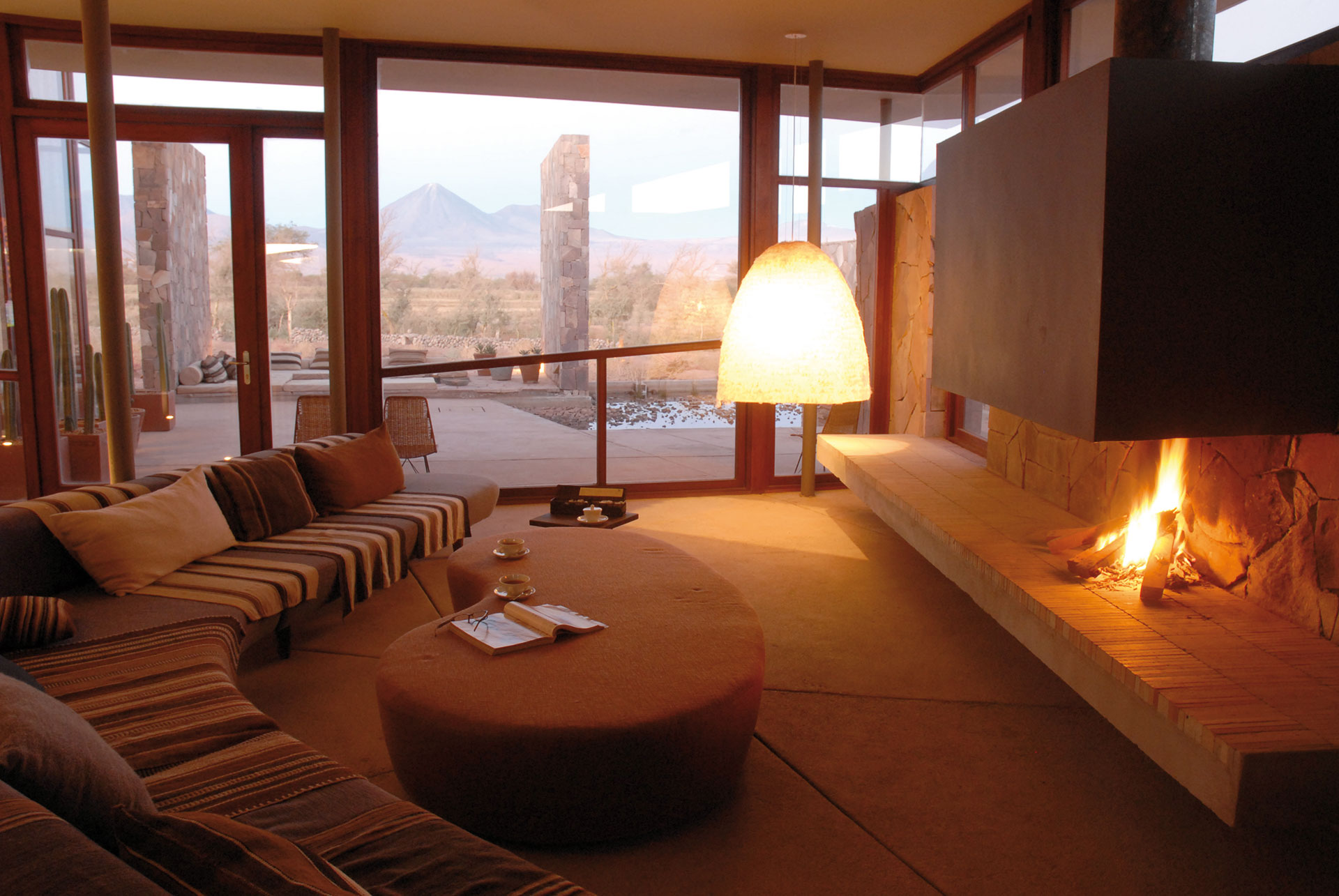 A hotel in an inhospitable location — and for all its stark charms, the Atacama Desert is certainly that — generally requires some serious comfort, simply in the name of balance. And a hotel in a visually striking environment needs to pay extra attention to its design, or risk disappearing anonymously into its surroundings. Tierra Atacama, a 32-room boutique hotel in a modern minimalist style, satisfies both of the above conditions, and then some.

An hour up the west coast of Baja California from the hedonistic holiday hotspot of Cabo San Lucas is a place whose charms are a little more austere, though spectacular in their own right: Paradero Todos Santos, a luxurious all-suite boutique hotel in a highly disciplined Brutalist style which seeks, at least in part, to draw the eye outward, to the landscape architecture and the untouched ecosystems of the surrounding desert. 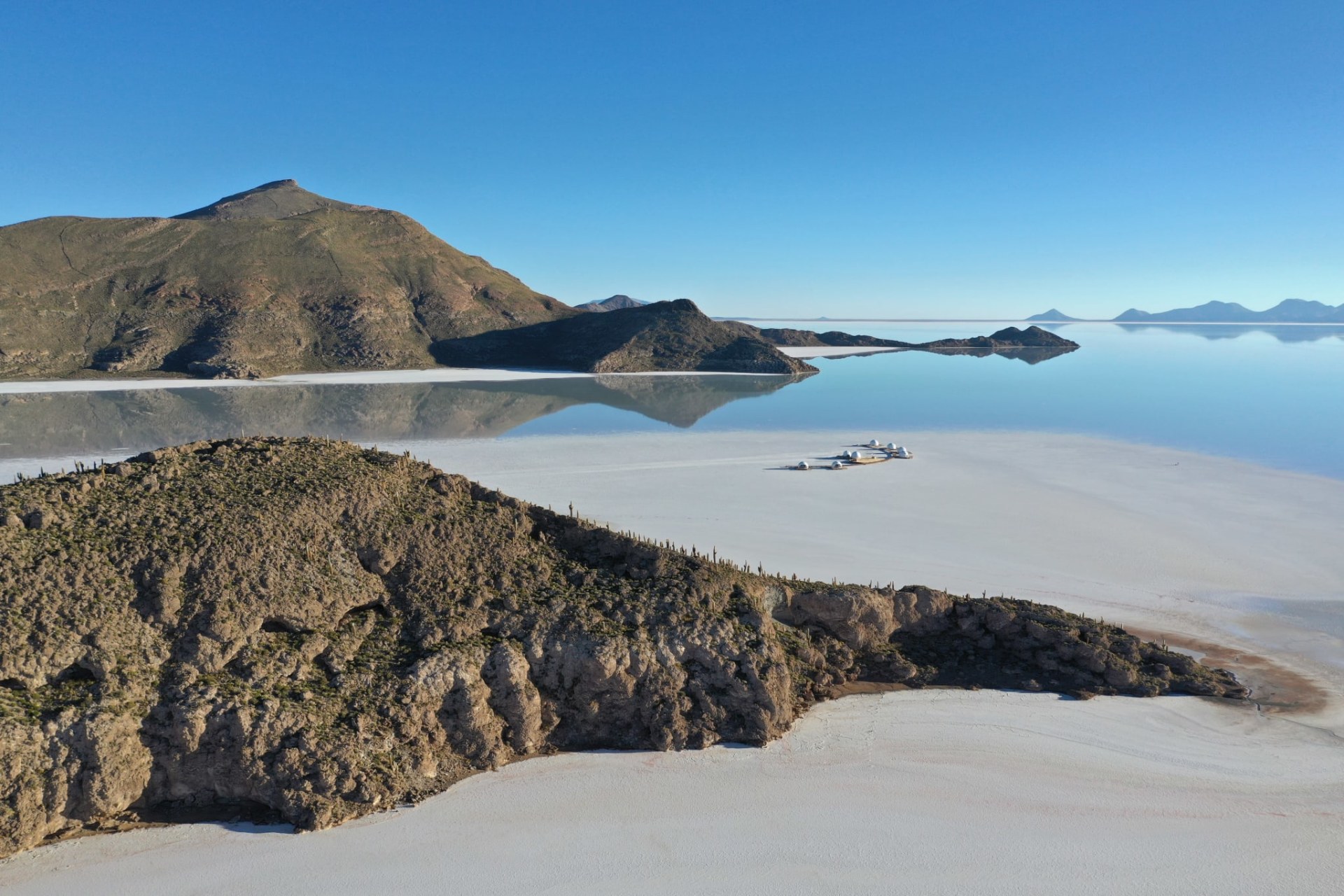 Some of the most spectacular stargazing in the world can be found in Bolivia, on the endless expanse of salt flats that is the Salar de Uyuni. At Kachi Lodge, the luxury tented camp concept gains a nocturnal dimension: each of the six dome-shaped cabins comes with a transparent ceiling for sleeping literally under the stars. They’ve also got wood-burning stoves, colorful artworks by Bolivia’s own Gastón Ugalde, and a comfortable and efficient little bathroom. 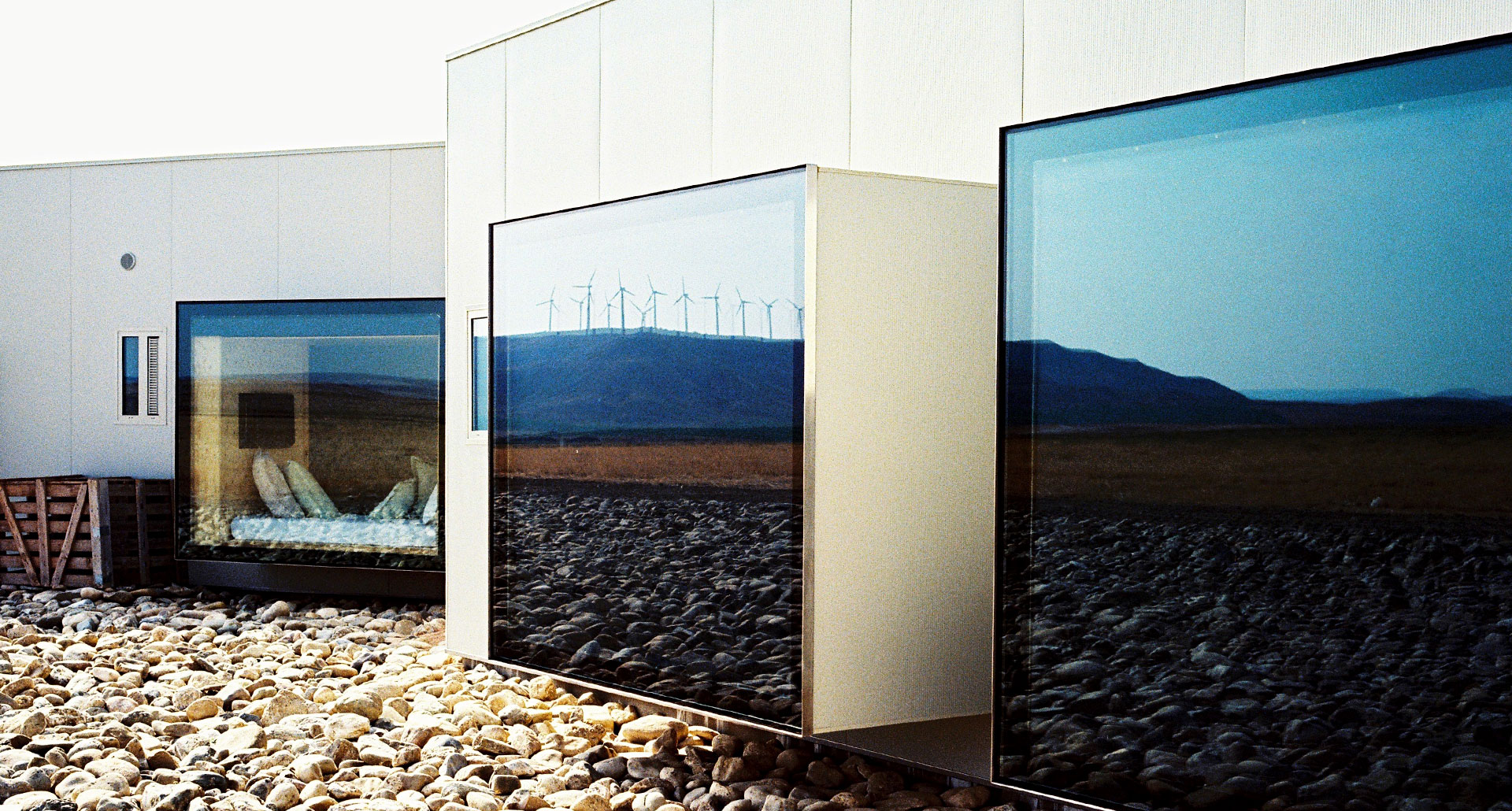 You certainly couldn’t accuse Aire de Bardenas of going the easy route. Set at the edge of a desert in the northern province of Navarre, and created by Barcelona-based architects Emiliano López & Mónica Rivera, these prefab pods, hunkered down against the relentless Bardenas wind, don’t exactly scream out “rustic” or “charming” or any related hotel-industry descriptors. But if you’ve got a sense of adventure, building-wise, they are promising, and more than a little exciting. 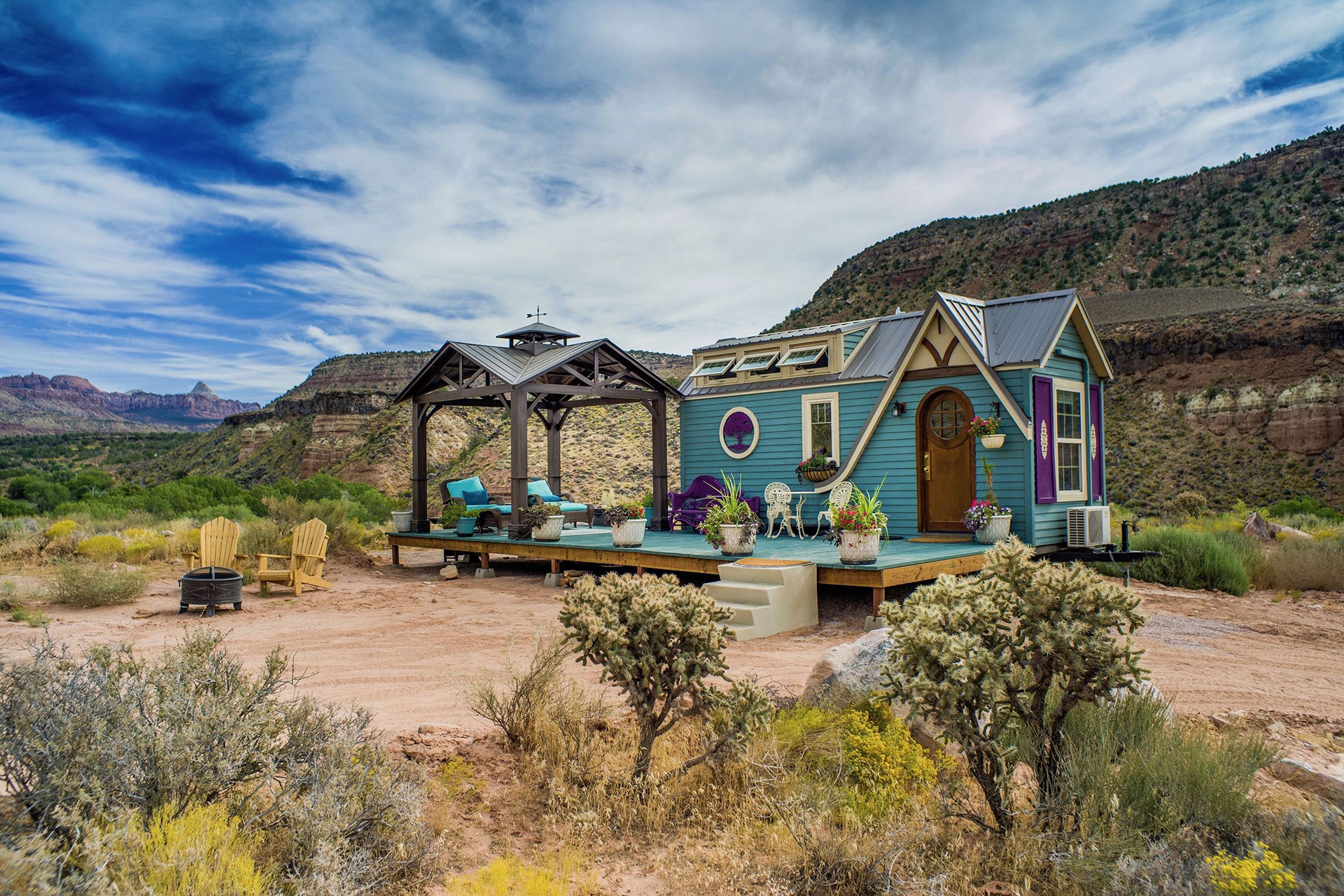 Zions Tiny Oasis lies just outside of Zion National Park proper, and while the oasis itself is tiny, so is each of its four units: they’re freestanding “tiny houses,” each one built on a platform, ranging from the 289-square-foot Guardian Angel to the 488-square foot King Solomon. They’re equipped with all the comforts of an ordinary hotel room, plus a hot tub and a fire pit — and practically at your doorstep are the near-limitless adventuring opportunities of Zion and the surrounding parks and wilderness areas. 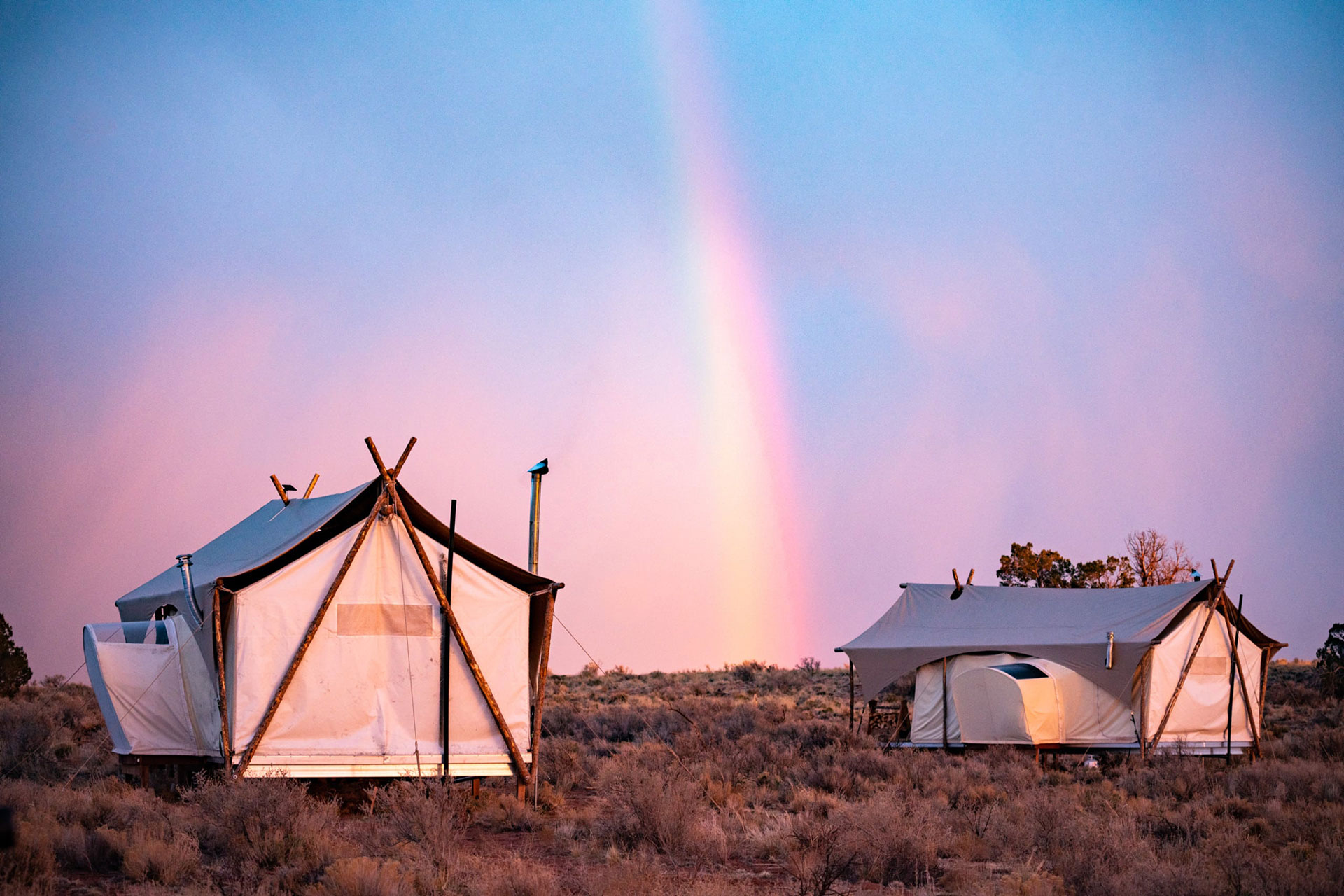 The Under Canvas hotels bring the concept of luxury camping to some of the most famous outdoor destinations in the United States, and this one might be the most famous of them all. Under Canvas Grand Canyon is set just 25 minutes from the South Rim, and its tents are a cut above the ordinary camping experience: think king beds, full en-suite bathrooms, and wood-burning stoves, with meals served at communal tables beneath peaked canvas roofs. 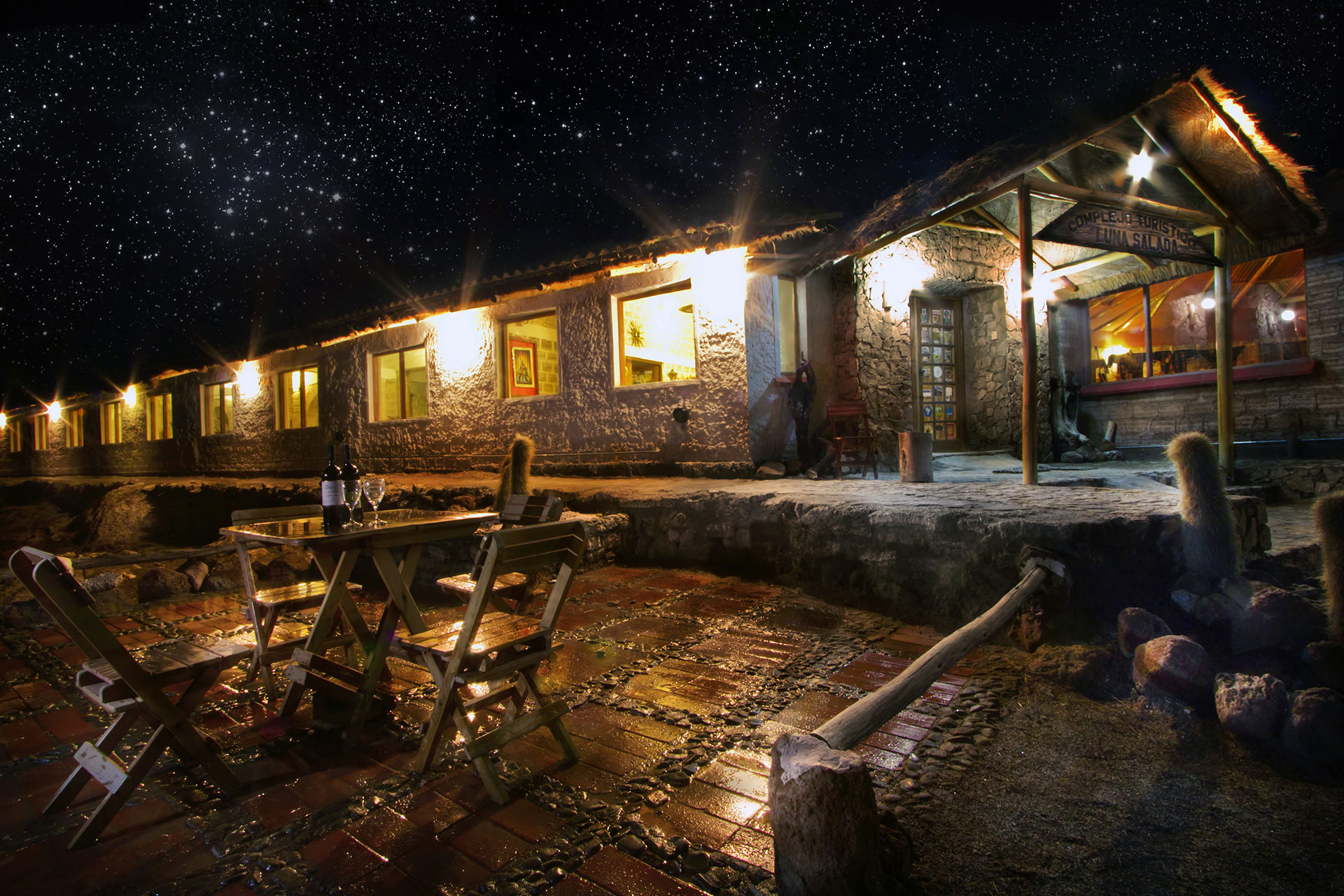 Not only is Salar de Uyuni the world’s largest salt flat, but when it’s flooded with calm, shallow water, it creates the world’s largest mirror. It’s so large satellites use it to recalibrate themselves — and for those closer to earth, the boutique Hotel Luna Salada offers a similar (though metaphorical) reset. Constructed almost entirely of salt blocks, Luna Salada features rooms outfitted in bright Andean colors, an immersive steam room with panoramic view, and the area’s best restaurant. 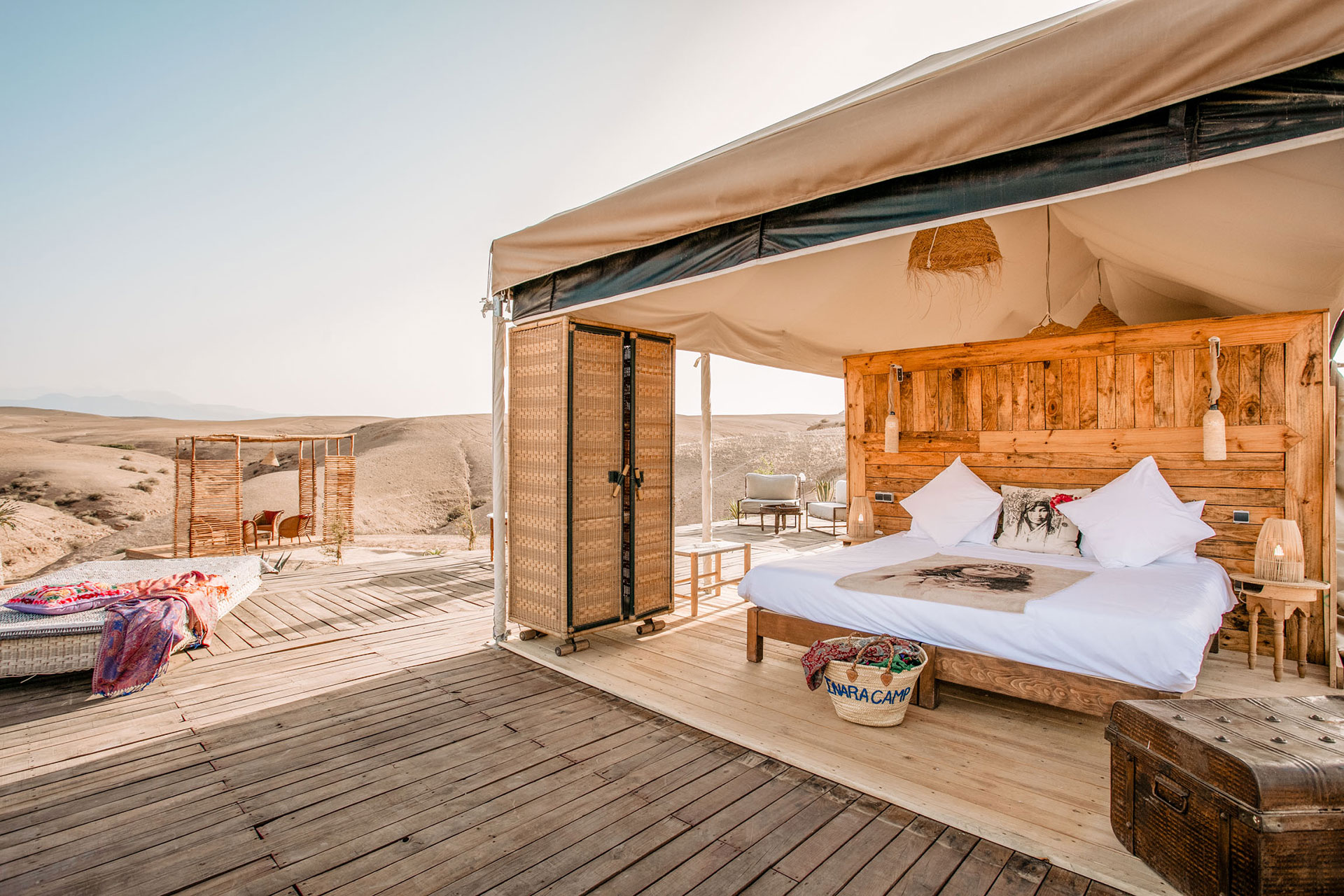 Less than an hour’s drive from the riads and luxury resorts of Marrakech, in the rocky Agafay desert at the foot of the Atlas Mountains, is a very different kind of hotel: Inara Camp, a collection of impressively plush safari-style tents surrounding a swimming-pool oasis in what feels like the exact middle of nowhere. The aesthetic, necessarily, differs from its sub-Saharan cousins, and is tailored to its location and its Berber inspiration. But the concept, and the effect, is the same as any luxury tented camp. 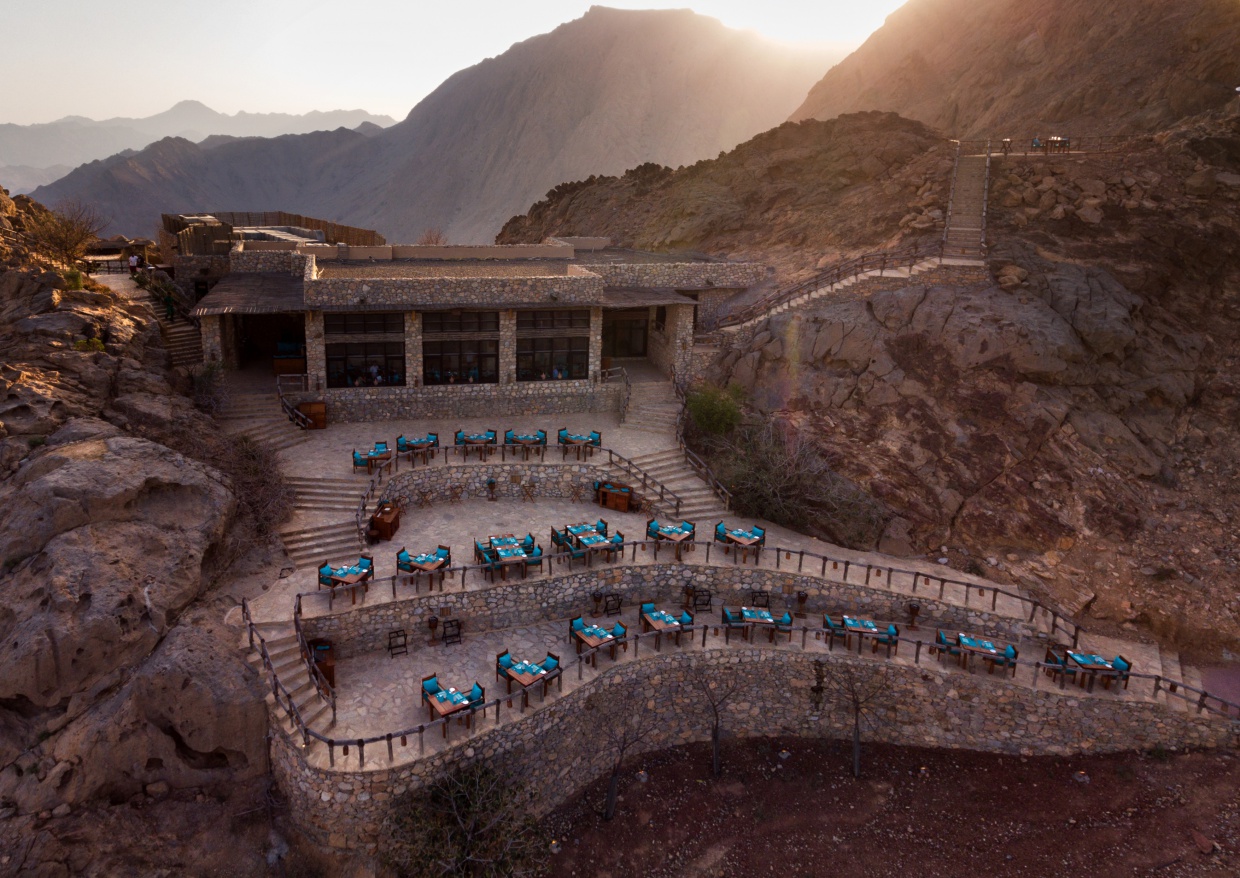 If your mental picture of the Arabian Peninsula doesn’t include some stunning seaside resorts, then your travel knowledge is in danger of being out-of-date. Zighy Bay, on the northern end of Oman, just across the peninsula from Dubai, is the sort of desert-meets-the-sea idyll that the Middle East really ought to be known for. And it’s hard to think of a better advertisement for the place than the Six Senses Zighy Bay. 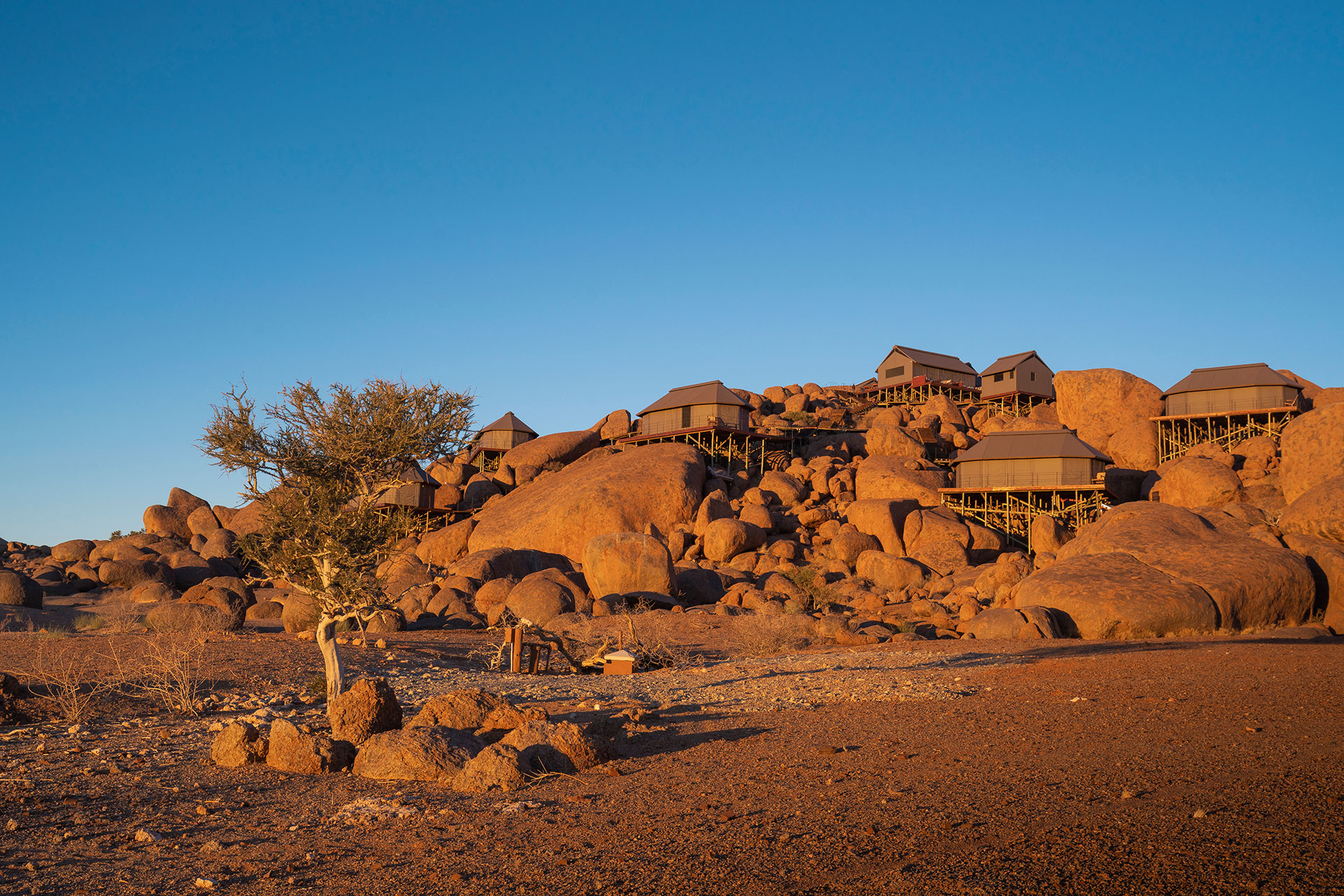 There are deserts, and there are deserts — and the Namib, if you follow our meaning, is the latter. This landscape is like nothing else on the planet, and Sonop Lodge places as little as possible between you and that picturesque desert. Sonop’s ten luxurious tents, on platforms elevated above the rocky desert floor, and inspired by Twenties-vintage British colonial style, are a long way from ordinary camping. 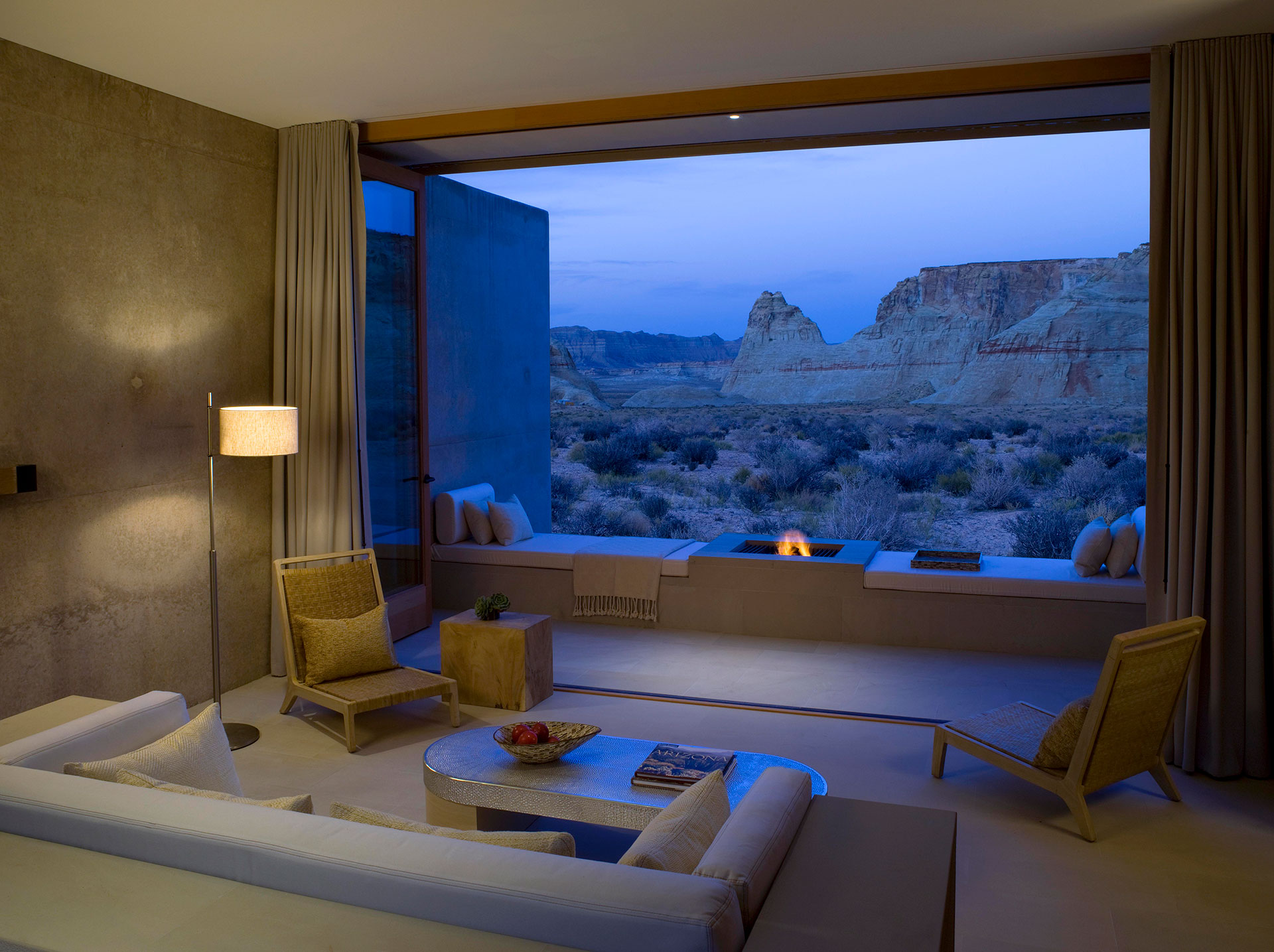 Our preference for quirky little independent hotels goes right out the window when the chain we’re talking about is one of Aman’s caliber — which, if we’re honest, can only mean Aman itself. It’s hard to think of a less predictable setting than southern Utah for an Aman outpost, but the otherworldly landscape is inspiring indeed, and serves as the ideal canvas for what is by any reasonable standard an architecturally distinguished property. 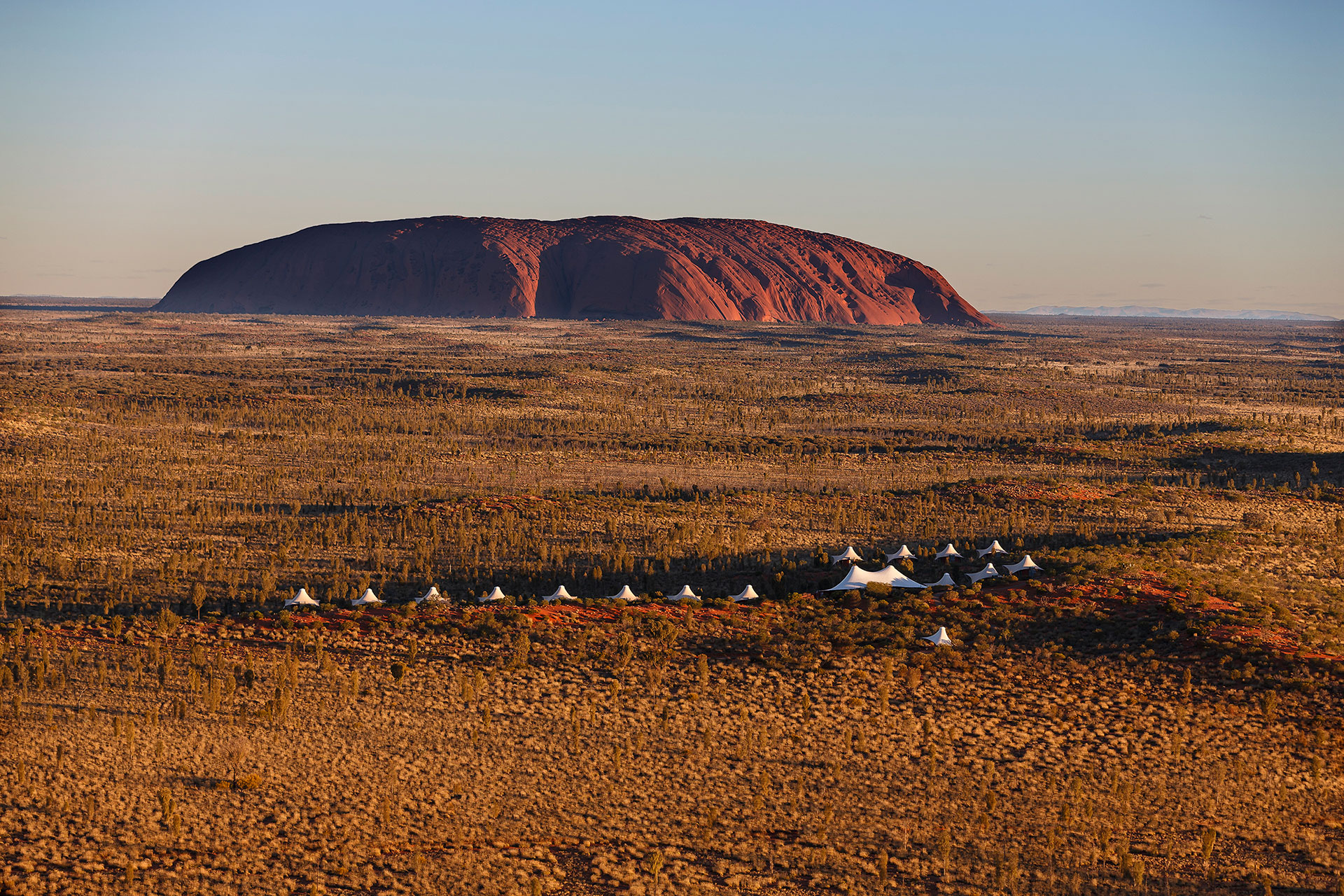 The name Longitude 131° refers to the precise east-west location of Uluru, the rust-colored monolith formerly known as Ayers Rock, itself the primary attraction in Australia’s Red Centre, and the reason for this hotel’s existence. Not quite the only lodging within sight of this popular tourist destination, Longitude 131° is by far the most luxurious, and offers the best view — each of the tentlike guest cabins looks through full-length windows across six miles of desert at the thousand-foot-high Uluru. 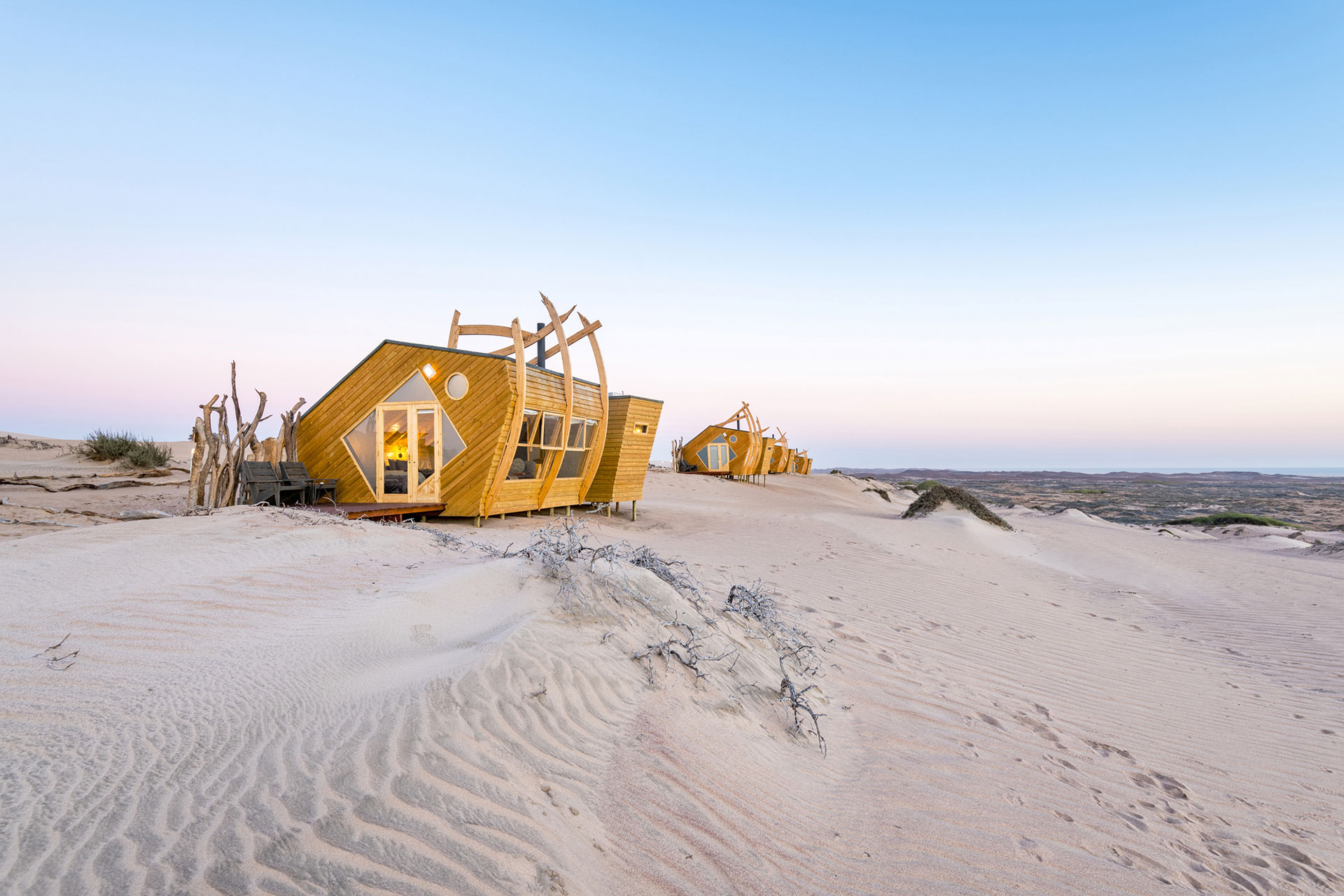 Designed in tribute to the numerous shipwrecks on the so-called Skeleton Coast of Namibia, the Shipwreck Lodge is nothing if not unique: its cabins lie in a row a mile inland, surrounded by picturesque dunes, looking out towards the Atlantic. They’re designed in a contemporary style that refers to shipwrecks without lapsing into imitation, and the interiors are as plush as the desert environment is unforgiving. 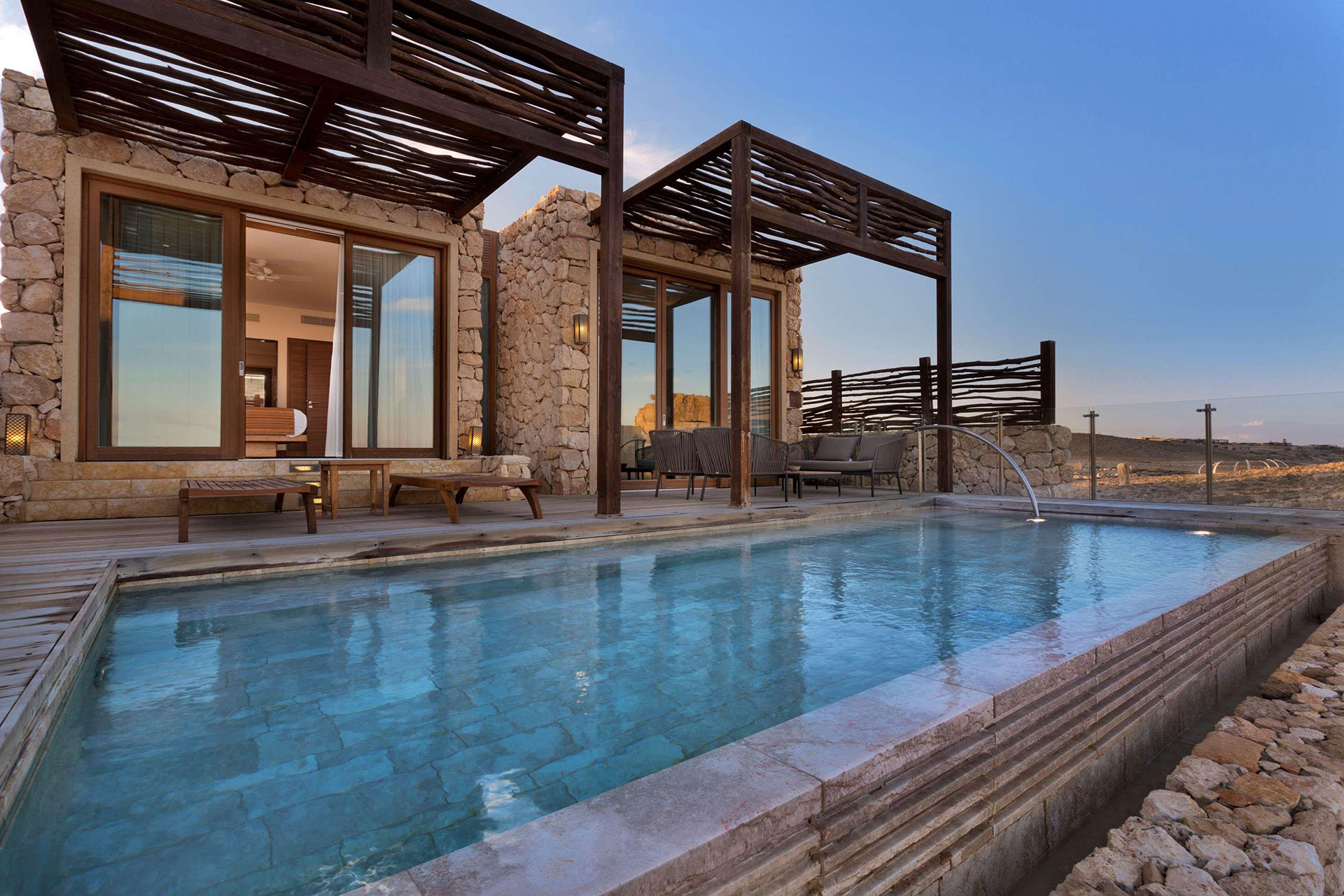 Beresheet Hotel feels like it’s literally at the edge of the earth. In the heart of the Negev Desert, this remarkable hotel stands half a mile above sea level on the rim of Israel’s Ramon Crater. While the hotel’s desert location allows guests to book a multitude of outdoor activities, it’s also tempting to just hang around for the day. The hotel’s design, making liberal use of local stone and wood, complements the desert landscape — and from the rooms’ large, private balconies, it’s easy to get lost in the sweeping, unobstructed views. 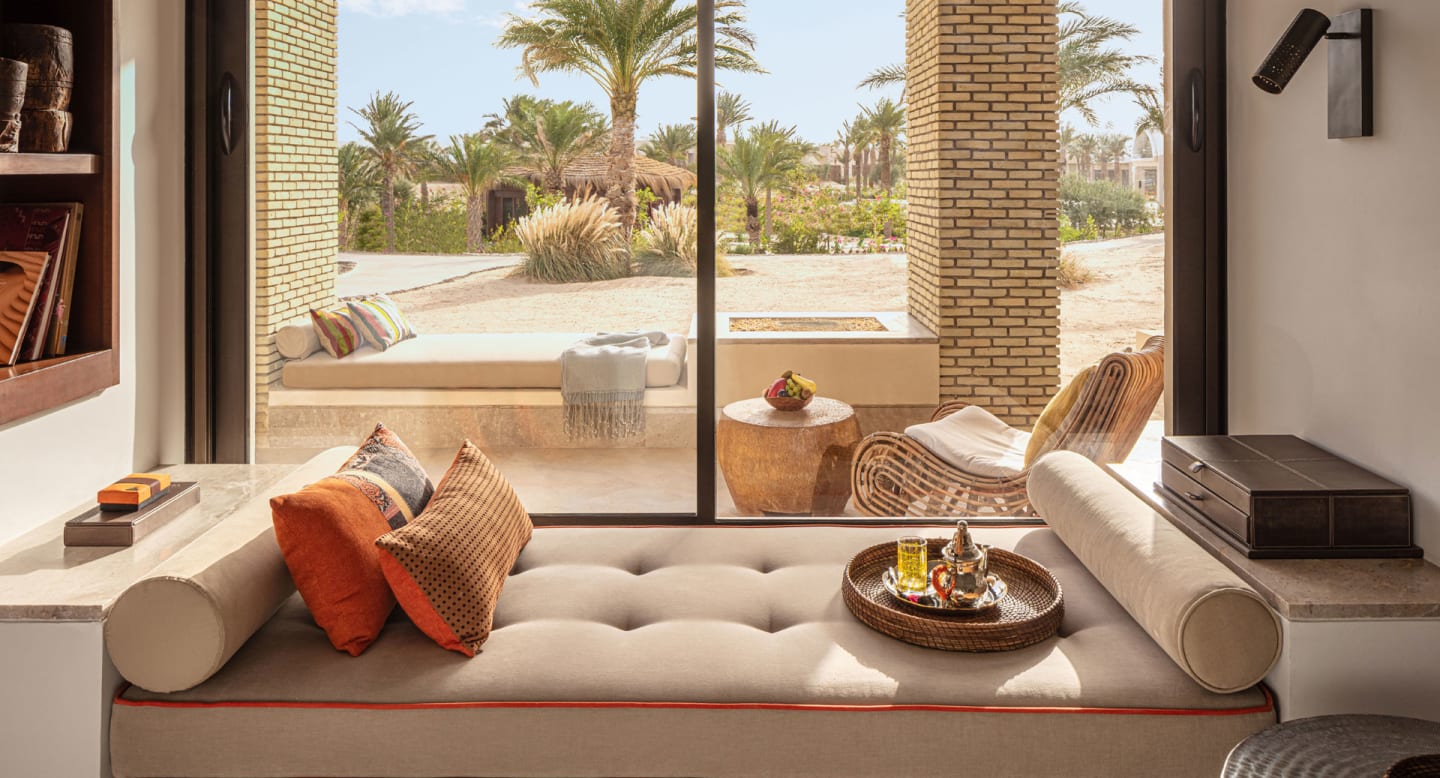 It takes a lot to surprise us these days, but Anantara opening a hotel in Tunisia qualifies. The brand is best known for island resorts, but this one is fully immersed in the Sahara, within driving distance of the dunes where the original Star Wars was shot. And while it’s been painstakingly tailored to its setting, using local architecture, design, and crafts, it’s as attractive and as luxurious as any of the other Anantara resorts. 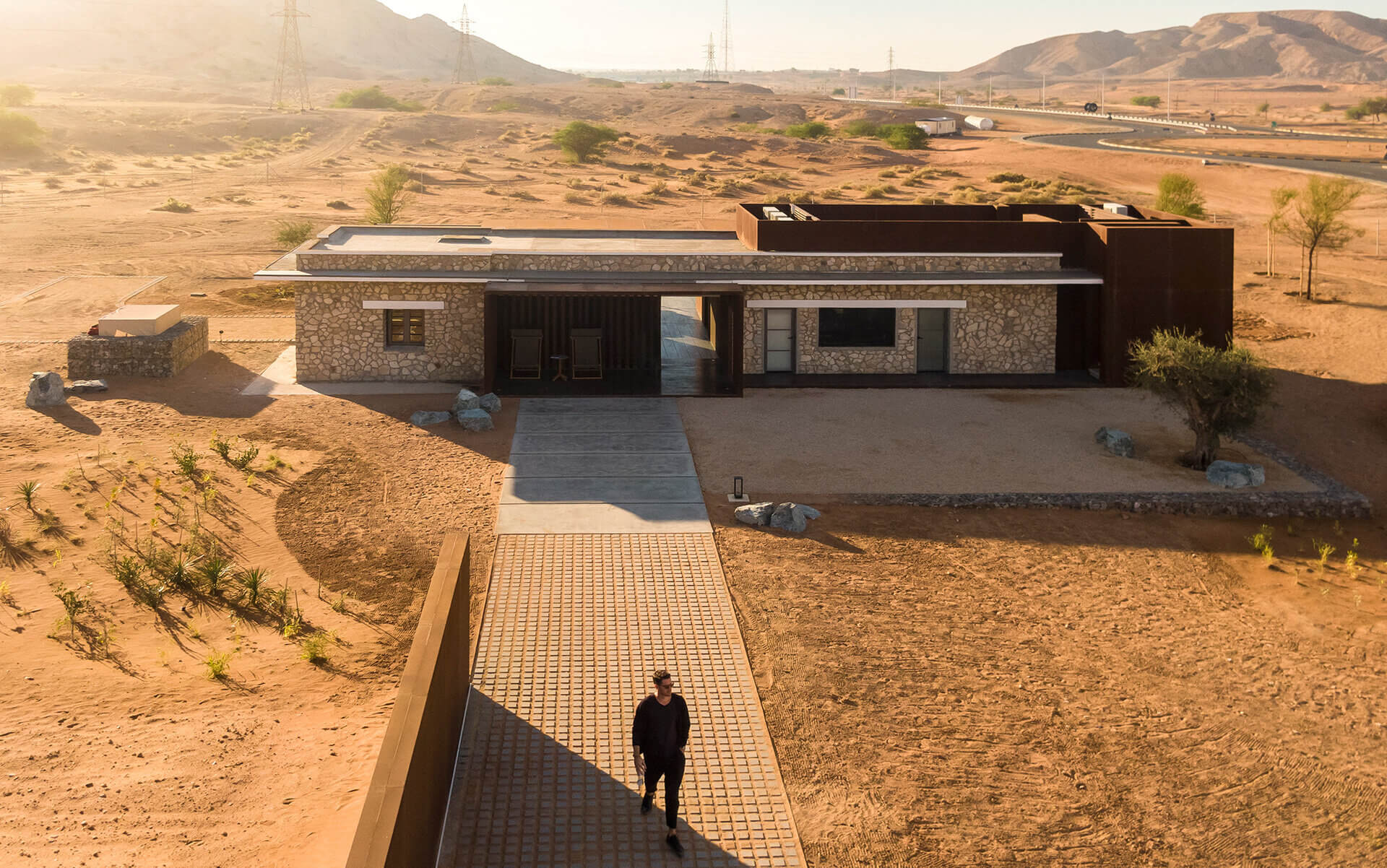 Bedouin-style desert dwelling meets inventive high-design luxury hospitality at Mysk Al Faya Retreat, less than an hour east of Dubai in the inland United Arab Emirates. Each of the five rooms is compact but luxurious little modernist haven, and all of them share a saltwater pool as well as an unusual spa experience: there’s no staff, just a series of relaxing spaces, from a shower walk to an herbal sauna to a salt inhalation room. 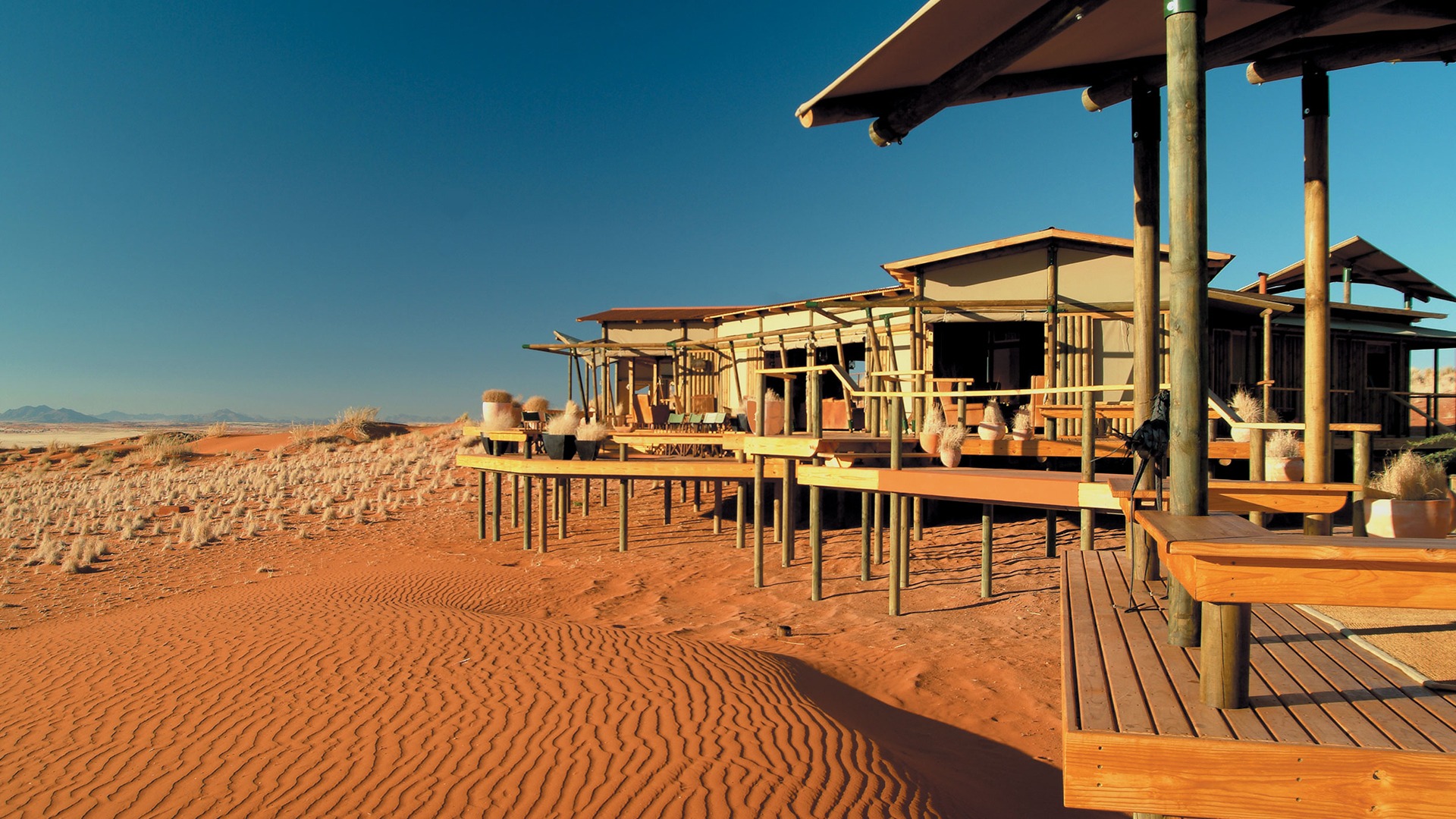 It’s a bit of a journey to get to Dunes Lodge, a luxury hotel perched on a remote desert plateau in southern Namibia — but the effort pays off every night, as you fall asleep under the stars. Guest rooms aren’t rooms, exactly: more like tents with wooden frames and canvas blinds that roll up and down, as open or as closed to the surrounding landscape as you like. Each has a bathroom and a deck, but there’s no air conditioning or electricity.