If you’re struggling to decide which college you or your child should attend, just remember, there’s really only one factor that you need to consider: the quality of nearby hotels.

I don’t usually like to rank hotels. The hotels we select for inclusion on Tablet all meet a certain high standard, and what differentiates them has more to do with personal taste and budget than it does with any notion of one being “better” than another. One time I ranked hotel lobbies and felt bad about it for months.

So instead of ranking hotels, I’m going to rank something that no one could possibly feel strongly about: colleges.

More specifically, I’ve compiled a completely subjective top ten of American colleges based on their nearby hotels. When the time comes to choose a school for your child or yourself, you’d be crazy to use this as your only resource. 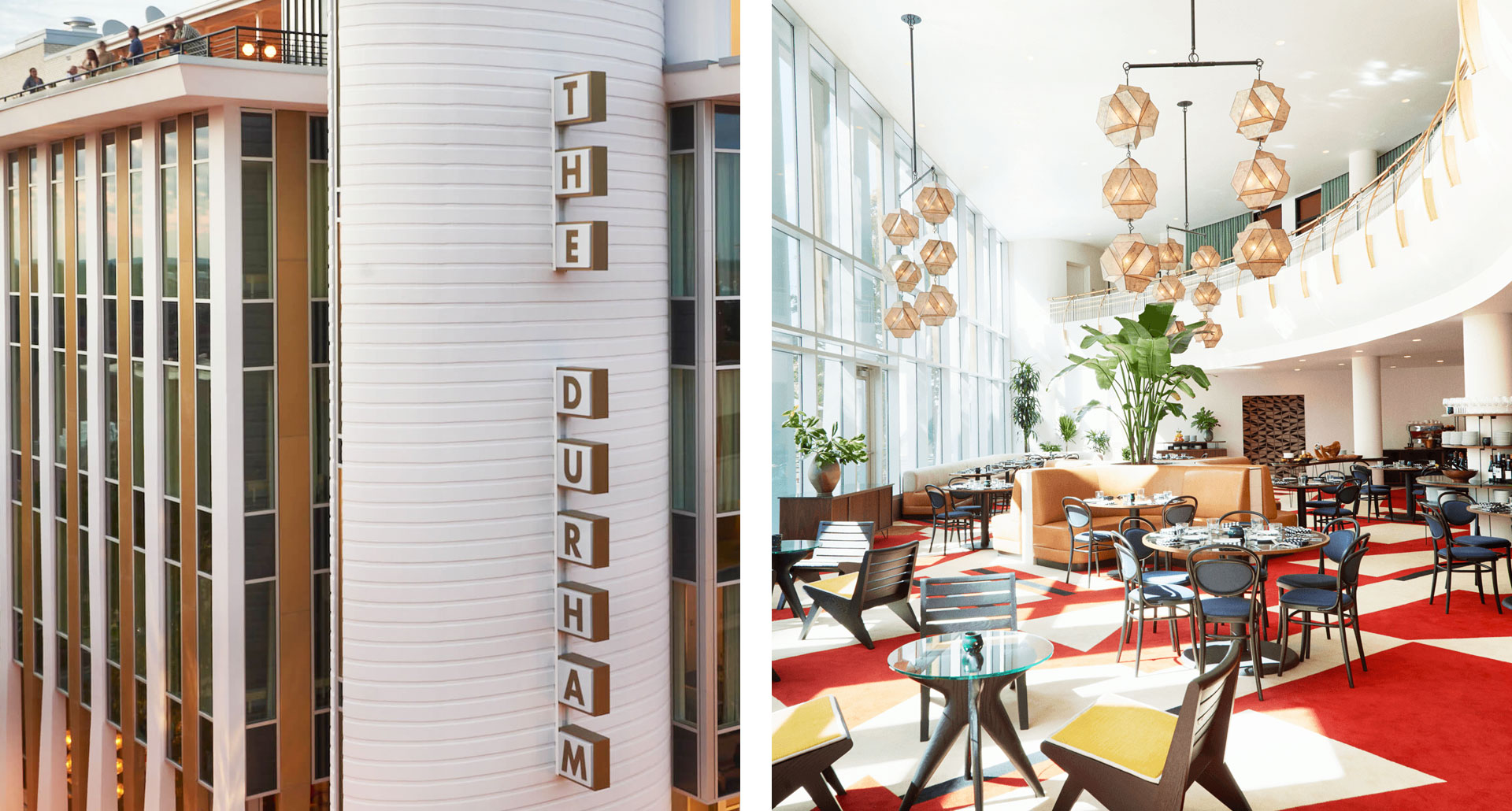 I created a special eleventh spot just for Duke because quite a few alumni are friends of mine and they’d never let me hear the end of it if I didn’t include their school on this list. But that doesn’t mean they’re undeserving — if during your campus visit you find yourself needing a break from Duke basketball fans (I told you this would be totally subjective), seek respite at The Durham, a fun and funky hotel whose designers expertly converted the mid-century modern Home Savings Bank building into an homage to local arts, crafts, and cuisines. 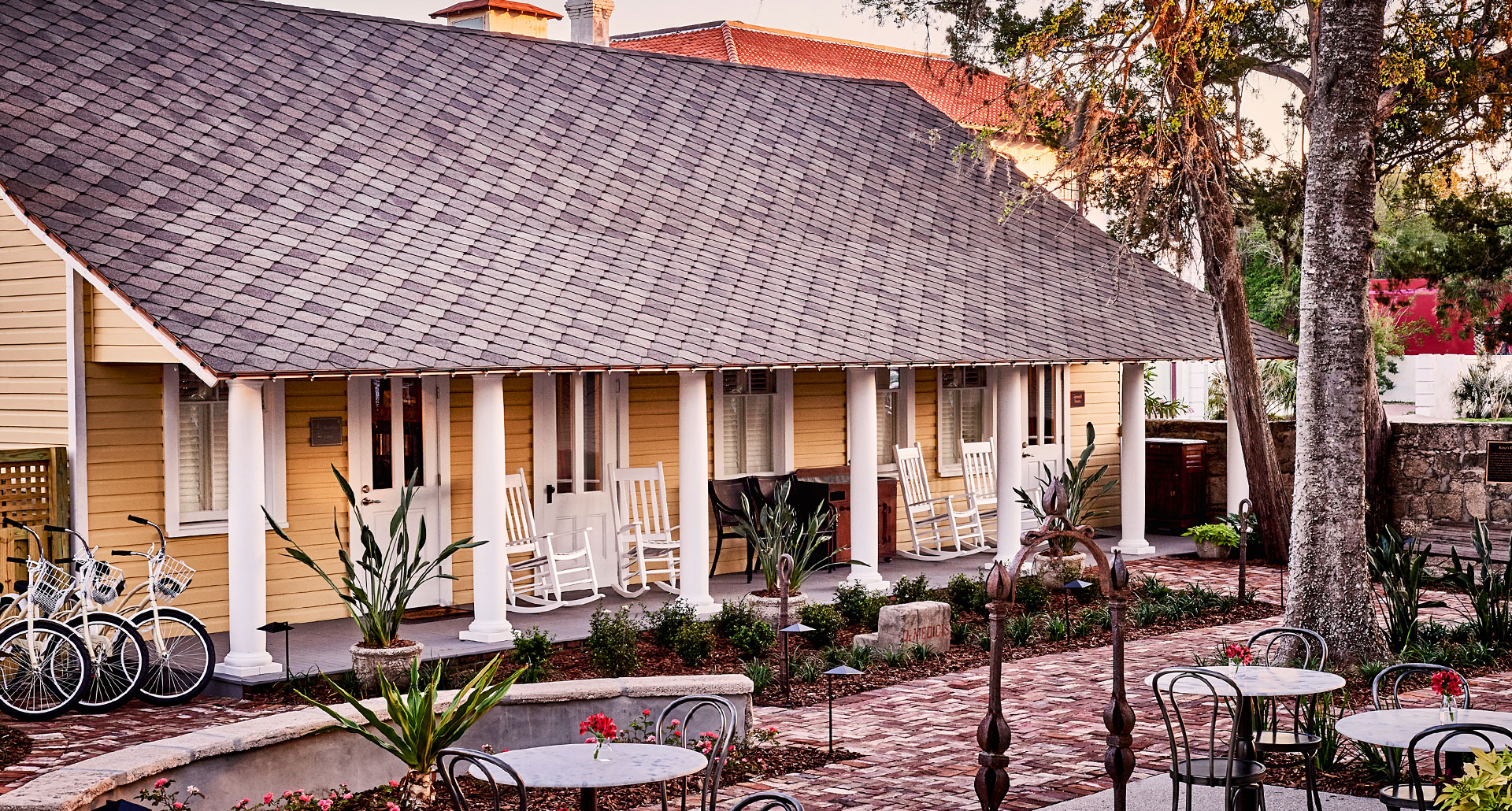 Now we move on to the real schools (just kidding, Duke fans, I love you all!). Wikipedia tells me that Flagler is a private four-year liberal arts college that was founded in 1968 and offers 29 majors and 34 minors. Sounds great! The other thing it has going for it is proximity to The Collector, a collection of nine historic buildings that date back hundreds of years. Located in the heart of St. Augustine — the oldest continuously occupied European settlement in America — it’s the perfect amalgamation of atmosphere and accommodation. And who doesn’t love village hotels? 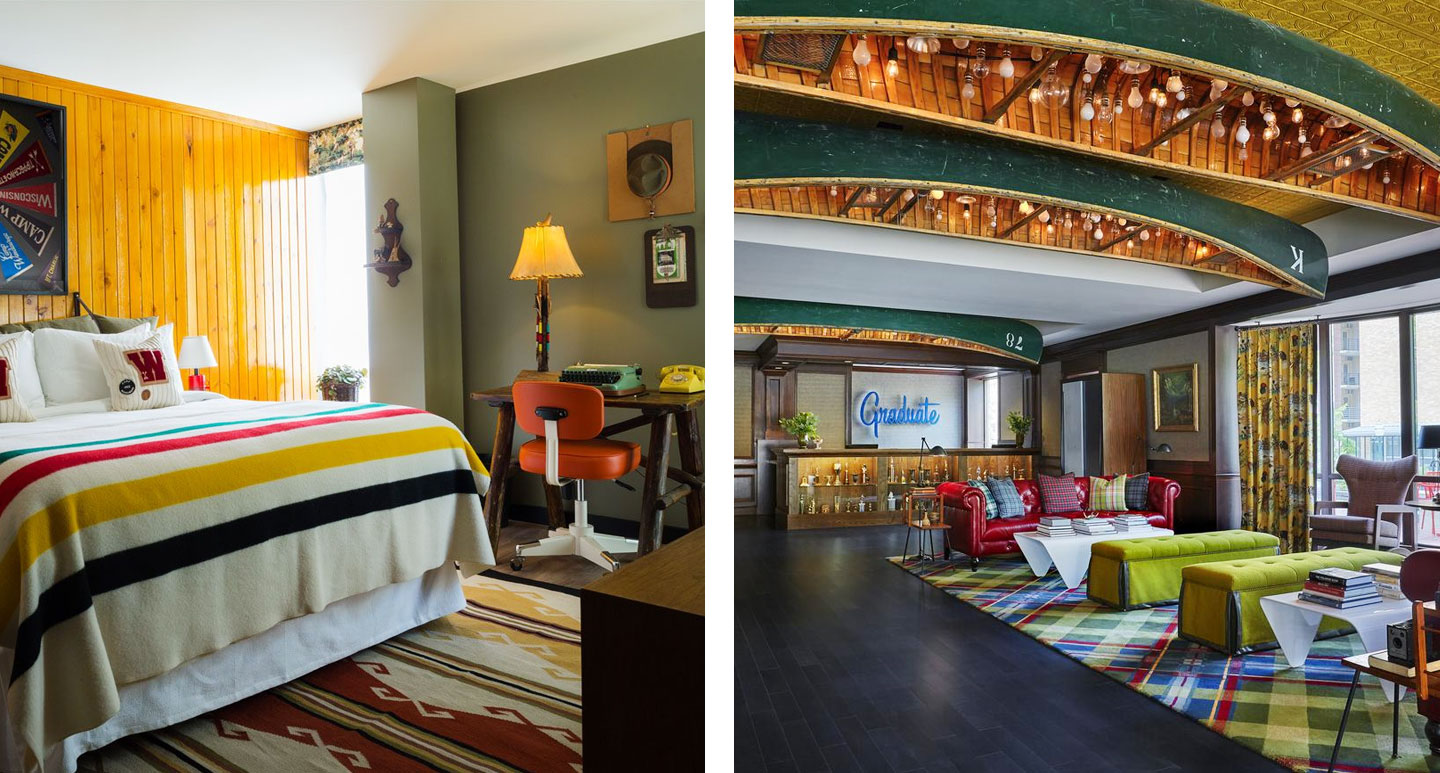 Graduate hotels are popping up in college towns all over the country, which is really quite extraordinary. For the most part, college-adjacent hotels have no need to try all that hard. They’ve got a captive audience, and guaranteed occupancy. So what’s remarkable about the Graduate hotels is that they’re, well, remarkable. The Graduate Madison is a block from the flagship campus of the University of Wisconsin, one of the so-called “Public Ivies.” This is one of America’s great intellectual centers, and now it has a properly cosmopolitan hotel to match. 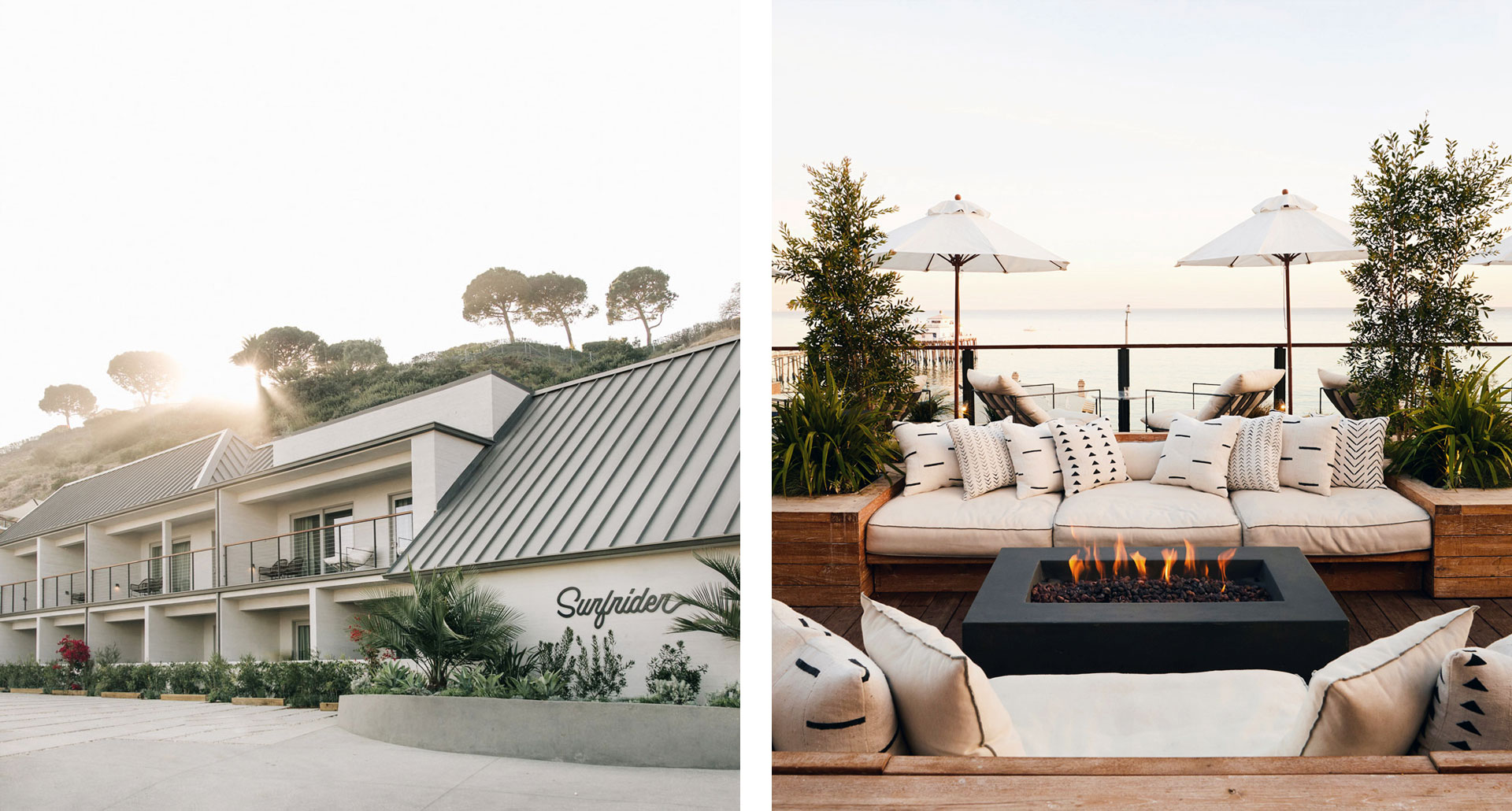 My first time seeing Pepperdine’s gorgeous seaside campus, as a young man visiting California from New Jersey, I wondered how its students got any work done at all. I went to Rutgers University–Camden, and needless to say, my views of the Delaware River didn’t quite compare to Pepperdine’s views of the Pacific Ocean. For views that do compare, though, just stay at The Surfrider. Every room has a private terrace with a partial or a full view of the Pacific, and inside the design is pared-down and elegant, with a sort of bohemian minimalism that fits perfectly in Malibu. 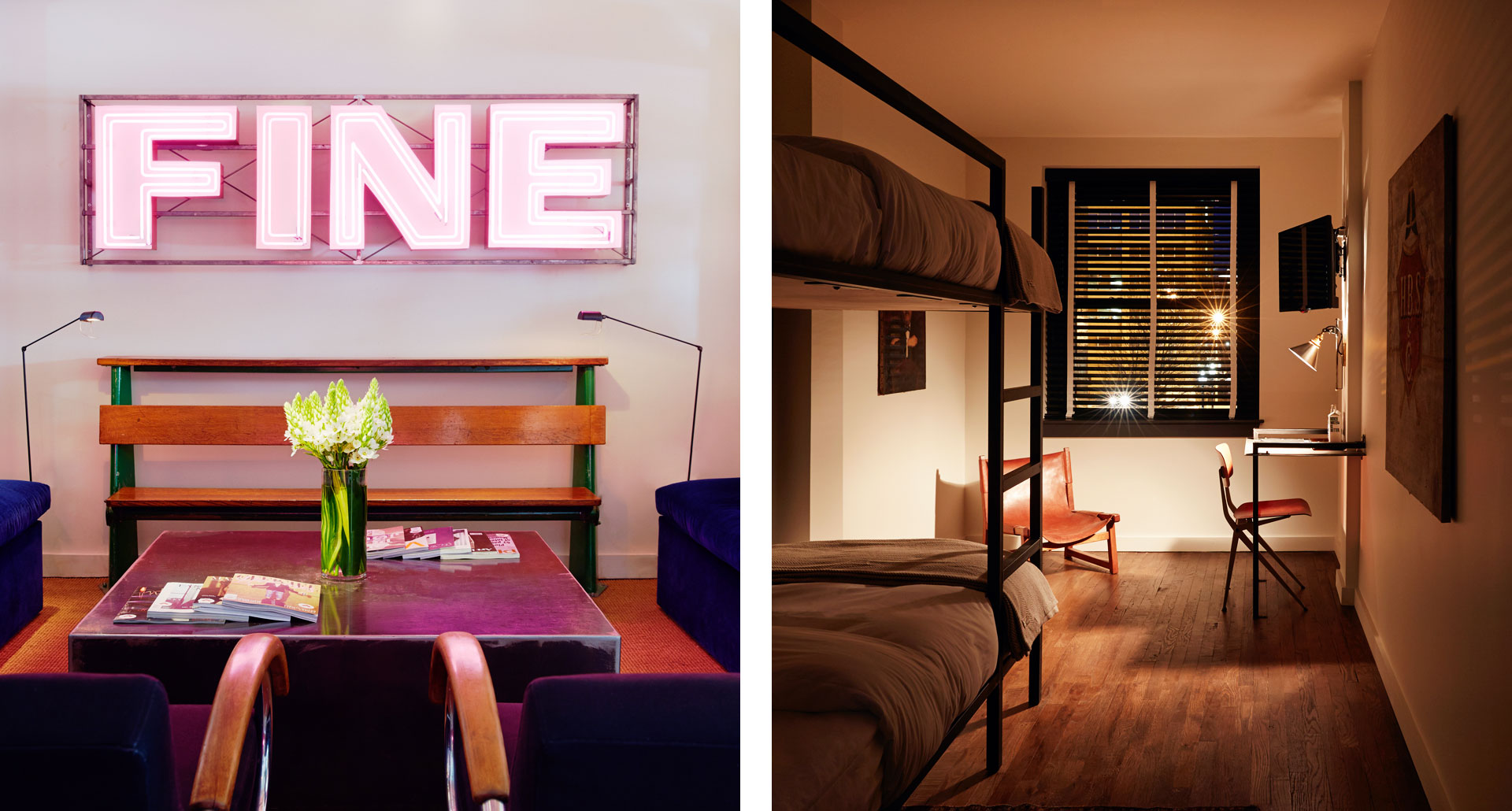 R.I.S.D. is the only pure art school on this list, which means it’s the only art school you should ever consider attending. If you need a little more convincing, though, look no further than The Dean Hotel. Having one of the world’s best design schools has helped Providence remake itself as a hipster-friendly creative capital — but for my money, having a well-curated boutique hotel that immerses itself in the local creative culture is what the city truly needed to establish its artistic bona fides. Budget-savvy guests will love The Dean’s custom-built bunk bed rooms. 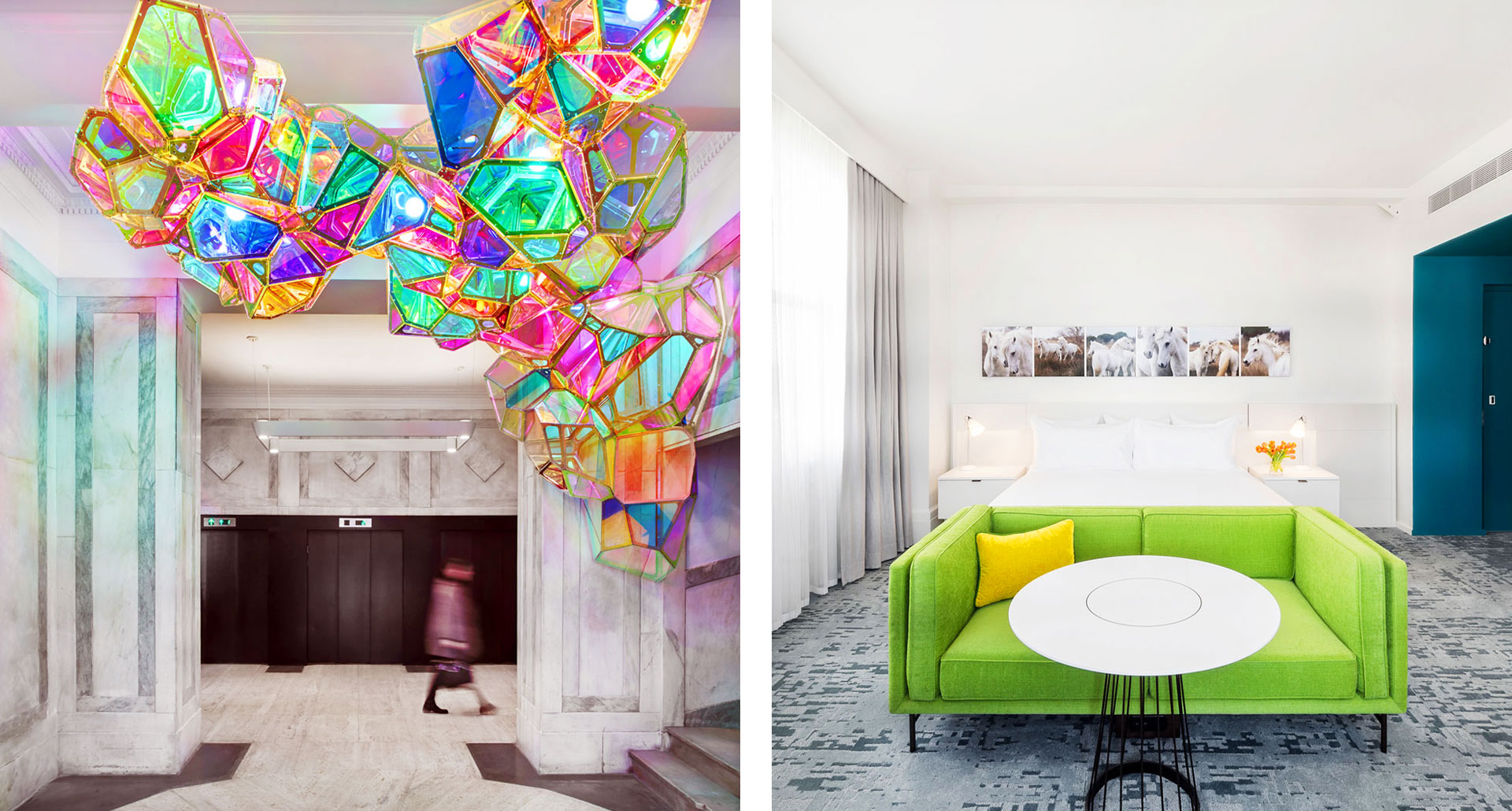 The University of Kentucky’s men’s basketball team famously lost to Duke in the 1992 NCAA semi-finals, widely considered the greatest college basketball game ever played. It was a heartbreaking last-second defeat and I hope my placing them ahead of Duke on this list takes away some of the pain. Of course, I couldn’t have done it without the 21c group, who transformed Lexington’s first skyscraper, the century-old First National Building, into another one of their supremely imaginative, locally-inspired, multi-venue museum hotels. 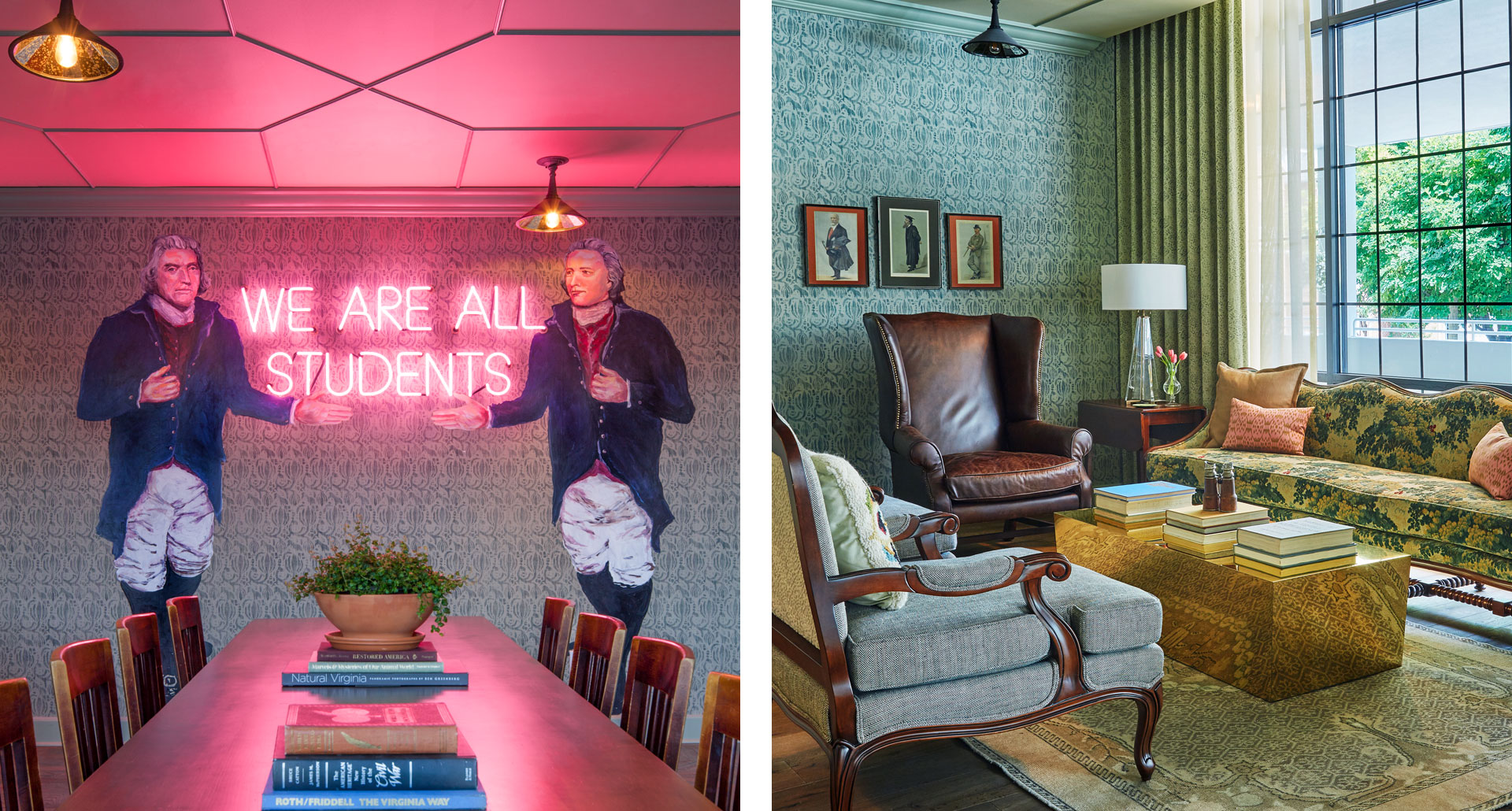 The Graduate hotels show up again with their second entry on the list. Graduate Charlottesville is located right across the street from the University of Virginia, making it the school’s coolest neighbor since Dave Matthews. With a combination of tweedy patterned fabrics, retro-inspired furnishings, and vintage artworks, the hotel takes its college-days theme just far enough, and the result is both stylish and fun. And as you’d expect, social life plays an outsized role, thanks mainly to a terrific rooftop restaurant and bar. 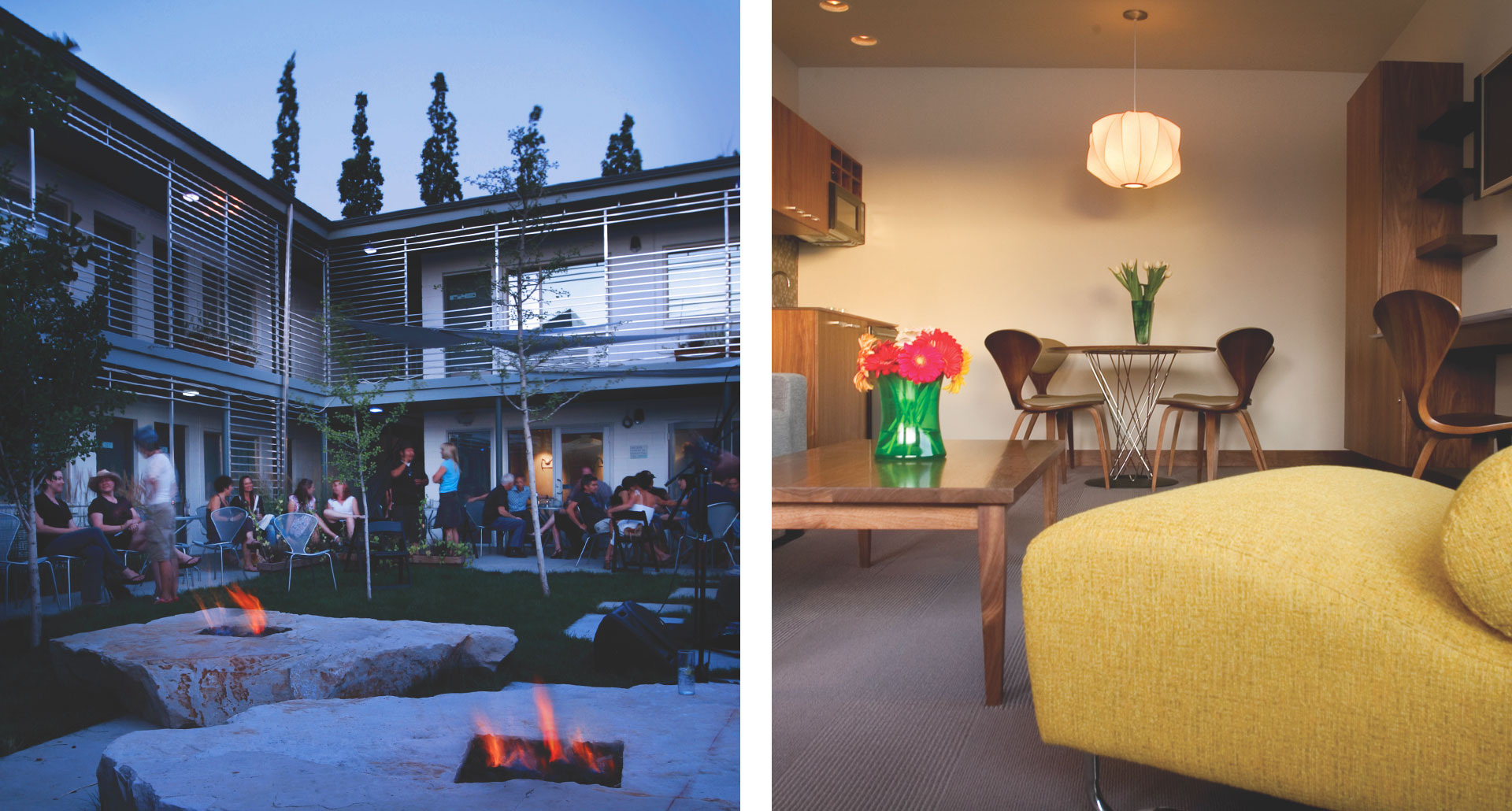 Did you know that Boise has the largest population of Basque-Americans of any city in the United States? The thriving, vibrant community organizes regular cultural events and festivals, and the downtown “Basque Block” of restaurants and markets is not to be missed. Sampling Basque cuisine isn’t the only reason to attend Boise State, though. The Modern, an old motor lodge that’s been re-animated as a social hub and boutique hotel, is also worth the price of tuition — especially their new extended-stay, apartment-style suites. 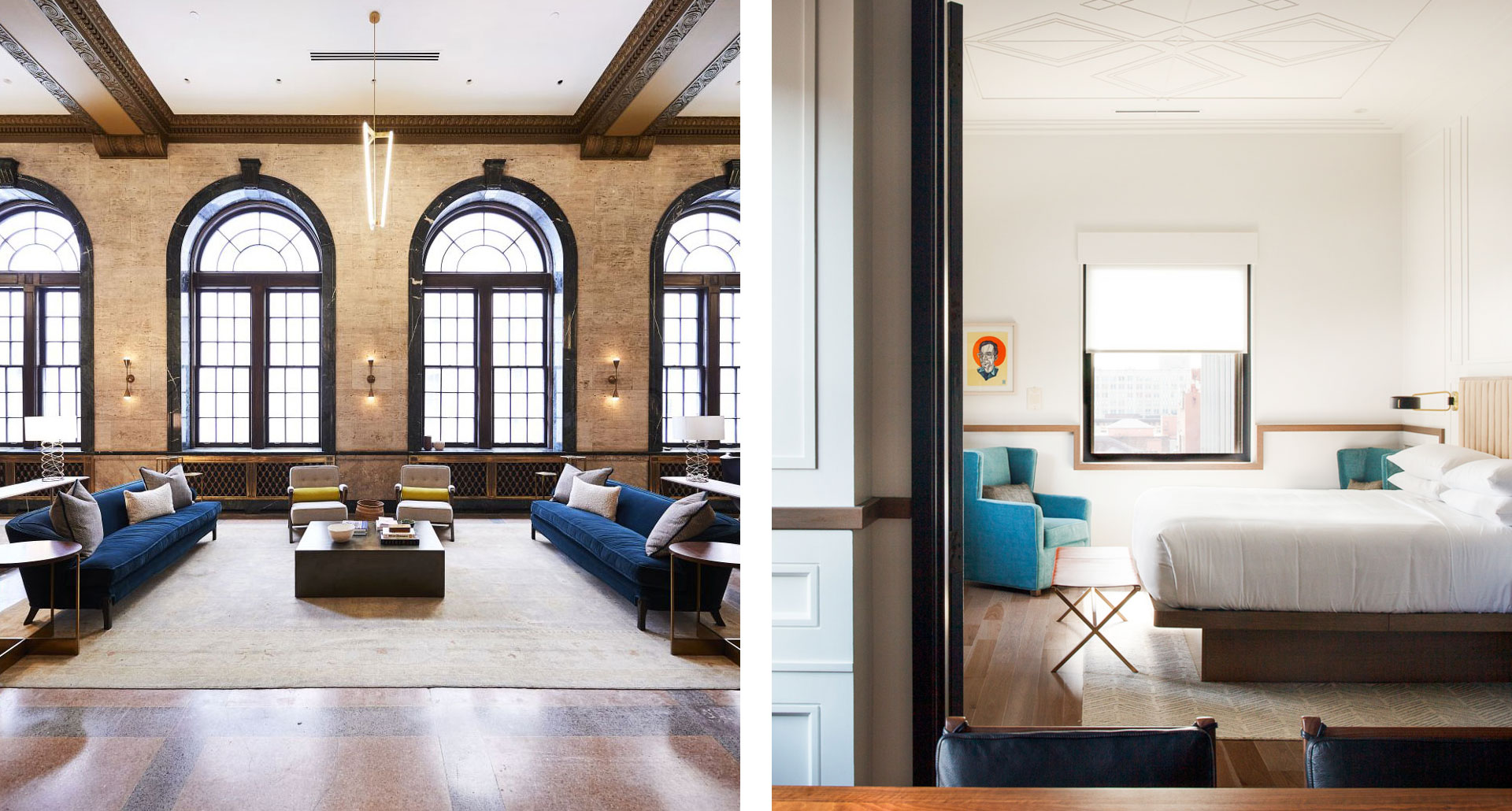 Nashville is obviously much more than a college town. After all, it’s the Country Music Capital of the World, and it has an NFL team. Fitting, then, that Vanderbilt’s alumni includes legendary musicians like Dinah Shore and Roseanne Cash — as well as legendary football players like…Jay Cutler. Originally opened in 1930, the Noelle Hotel is another Nashville legend. After a 2018 renovation, the Art Deco beauty reemerged sporting a smart, modern take on classic luxury, and a sincere reverence for the history of the building and its surrounding neighborhood. 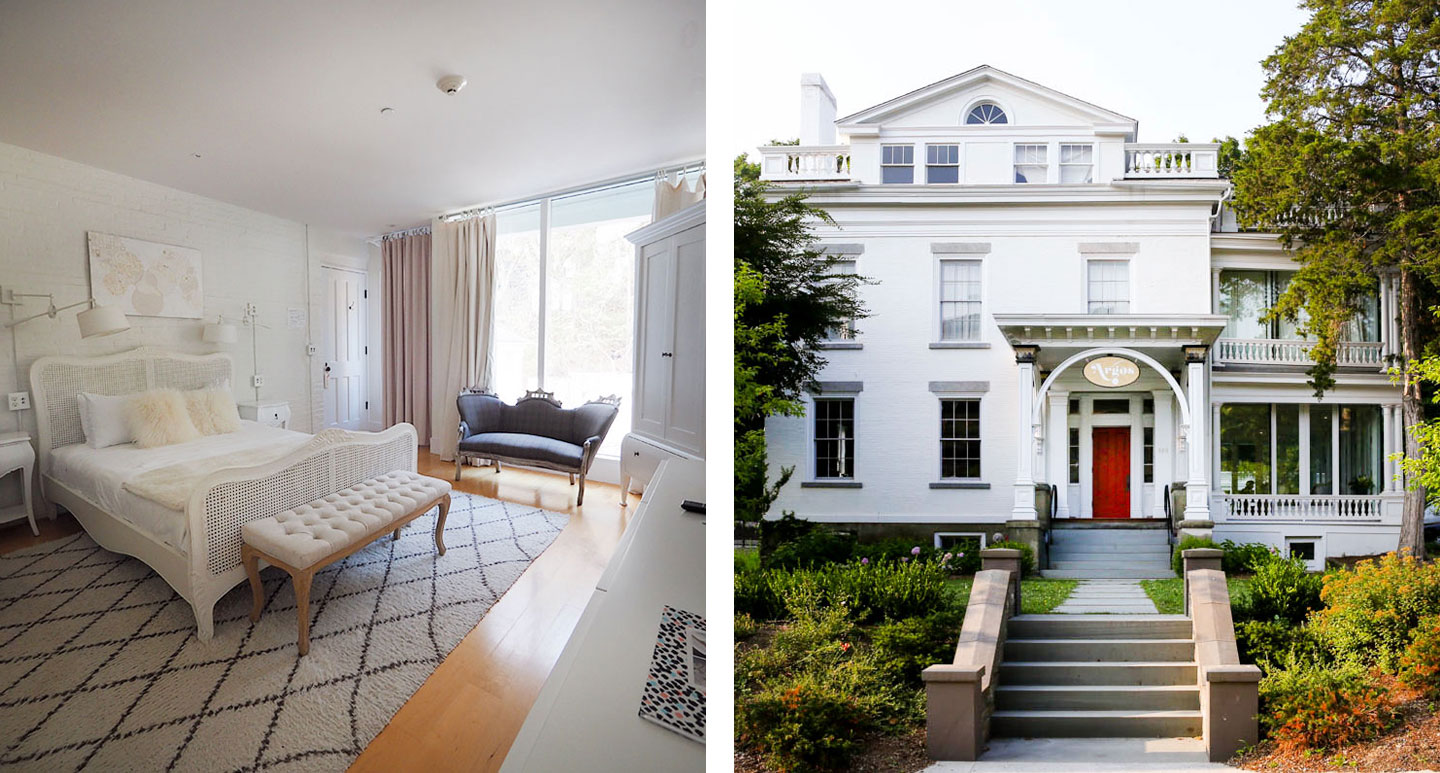 Cornell is the only Ivy League school on the list, and I give them full permission to promote that fact in their attempts to attract the best and brightest students. Another sure attraction, other than all the nearby gorges, is the Argos Inn. This 1831-built mansion surely would have made it into our recent list of amazing mansion hotels, but I saved them for this slightly more prestigious honor. Speaking of gorges, the inn has a convenient location just off the end of the Ithaca’s main drag — and just across Cascadilla Gorge from the Cornell campus. 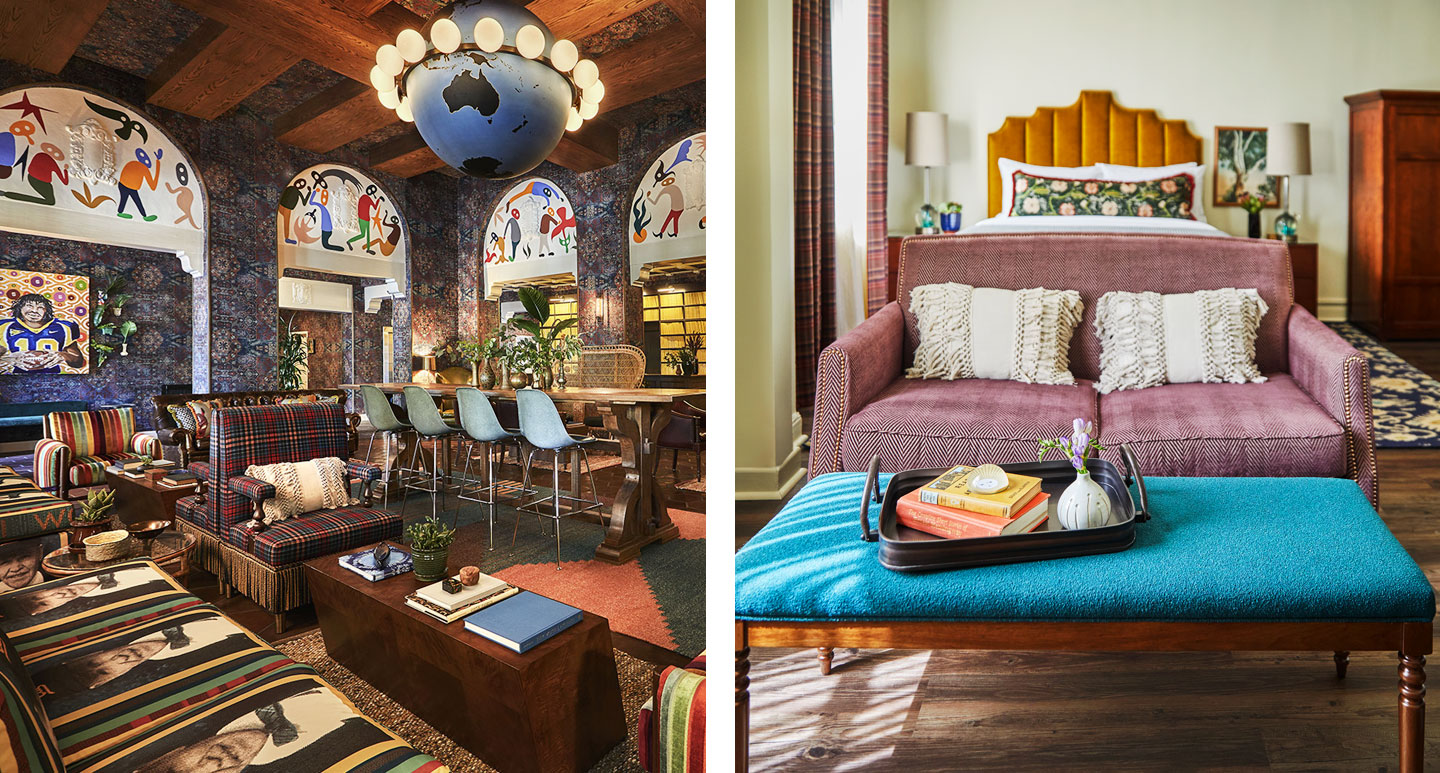 The University of California at Berkeley is known for being the home of the 1960s free-speech movement and a hub of intellectual thought and political activism in America. It might soon also become known for being only a block away from Graduate Berkeley, the third Graduate hotel on the list. Let’s just sum the hotel up this way: the Graduate essentially imagines what Indiana Jones might have done with a 143-room 1928-vintage hotel, had he been an archaeology professor at Berkeley. Isn’t that all the reason you need to attend?

Feel free to let me know in the comments what, if anything, I got wrong…