The best hotel lobbies spare no expense to immediately grab your attention and make a grand statement about the experience to come.

When it comes to the many spaces that make up a hotel, the lobby is probably our favorite. It’s your first real encounter with the hotel, and the best examples spare no expense to immediately grab your attention and make a grand statement about the experience to come. We polled the Tablet staff to find out which lobbies made the biggest impression on them, and while the results vary in style, each one offers guests an equally epic introduction. 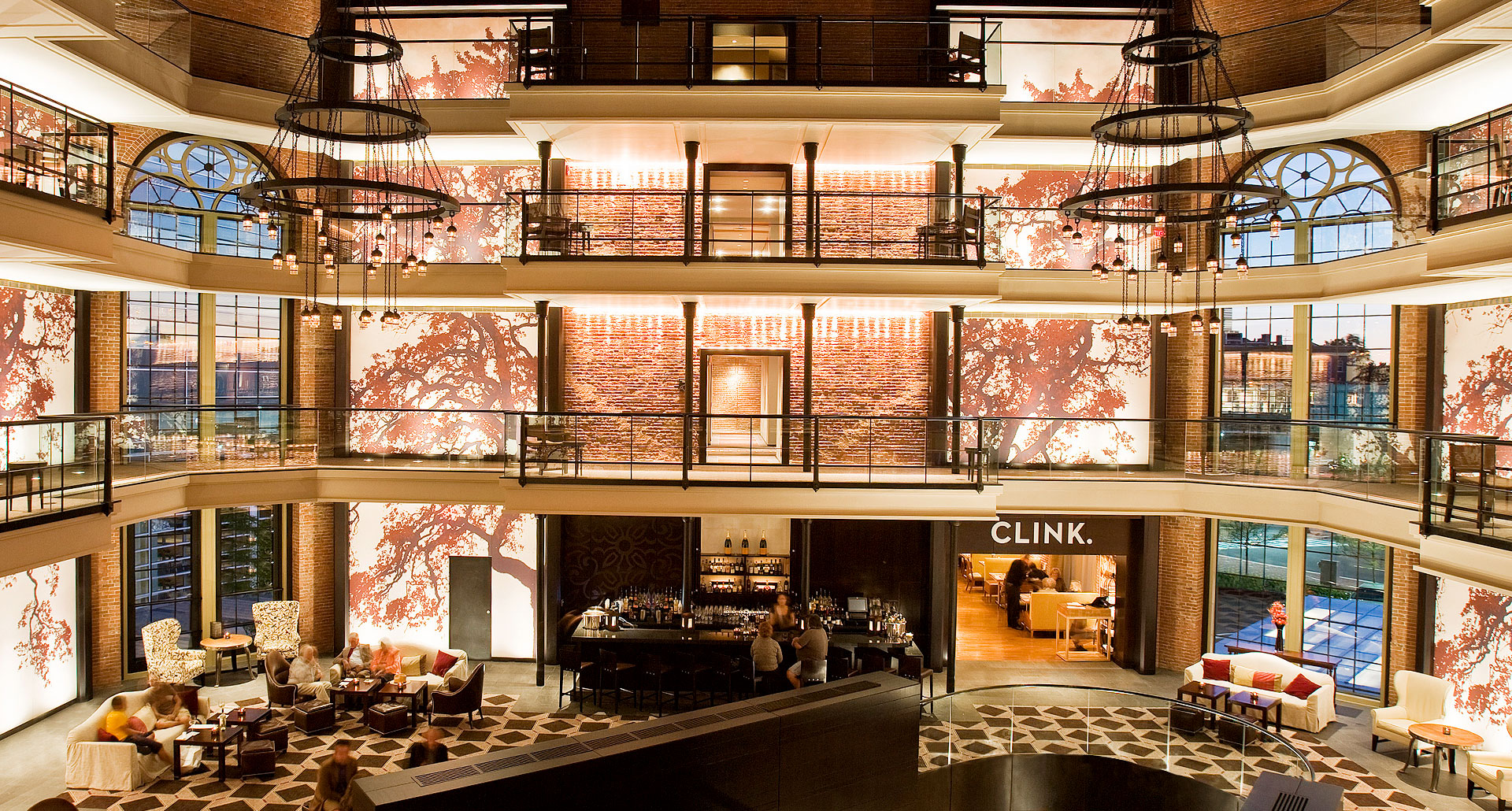 You might expect a former jailhouse to be a crowded and claustrophobic space, but the Liberty’s best feature is the vast central atrium, with its three-story windows and its 90-foot rotunda. It must have looked a good deal heavier and more imposing in its former life, but in its current incarnation it feels like the entryway to a parallel universe. 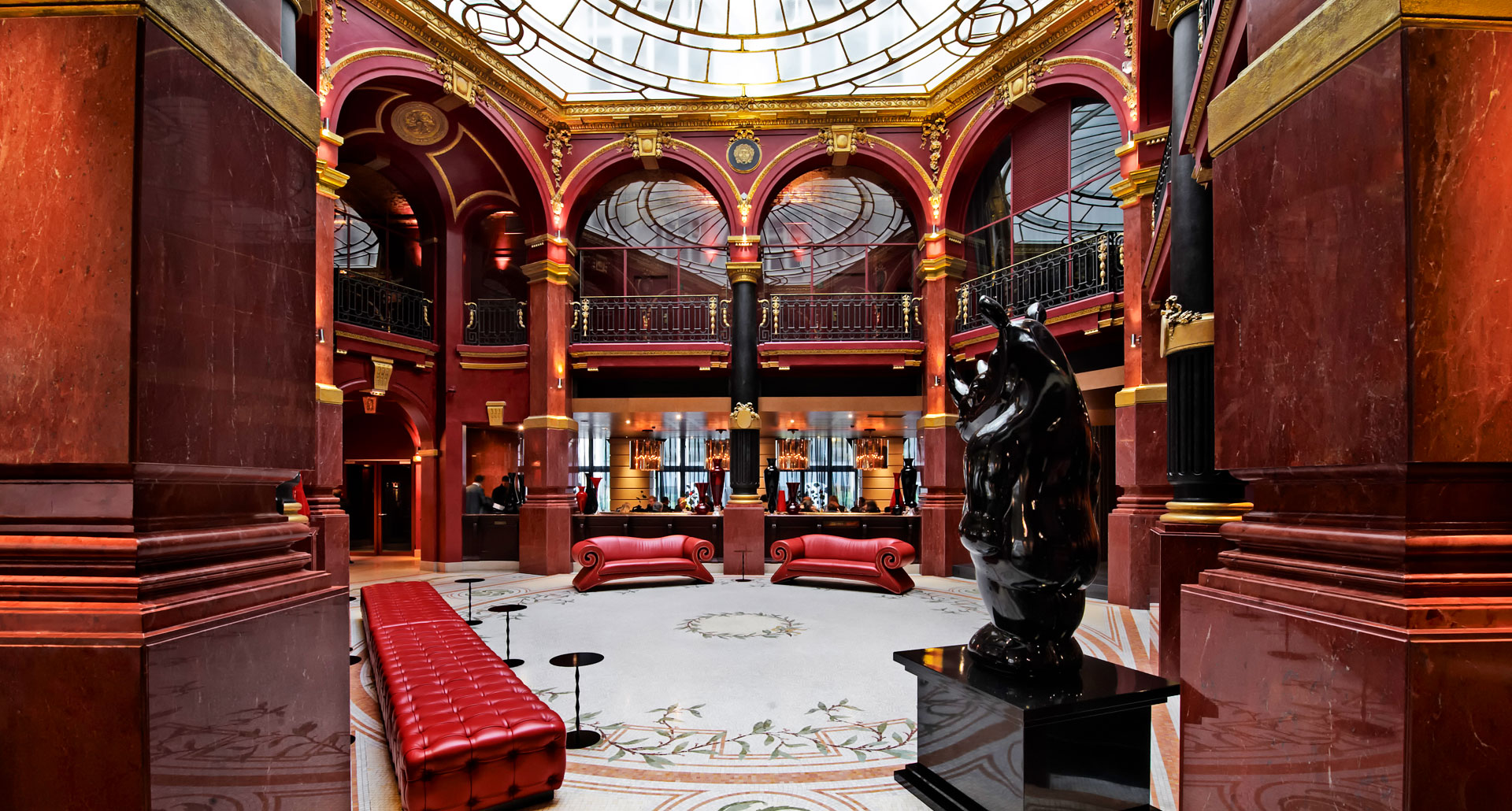 Though it was a bank, not a prison, the Banke Hôtel has one thing in common with the Liberty, and that’s its soaring atrium and sunlit rotunda. Thanks to the present-day décor, it feels perhaps more like the Ministry of Magic than any financial institution; what it doesn’t feel like is another beige, bland luxury hotel. A job well done. 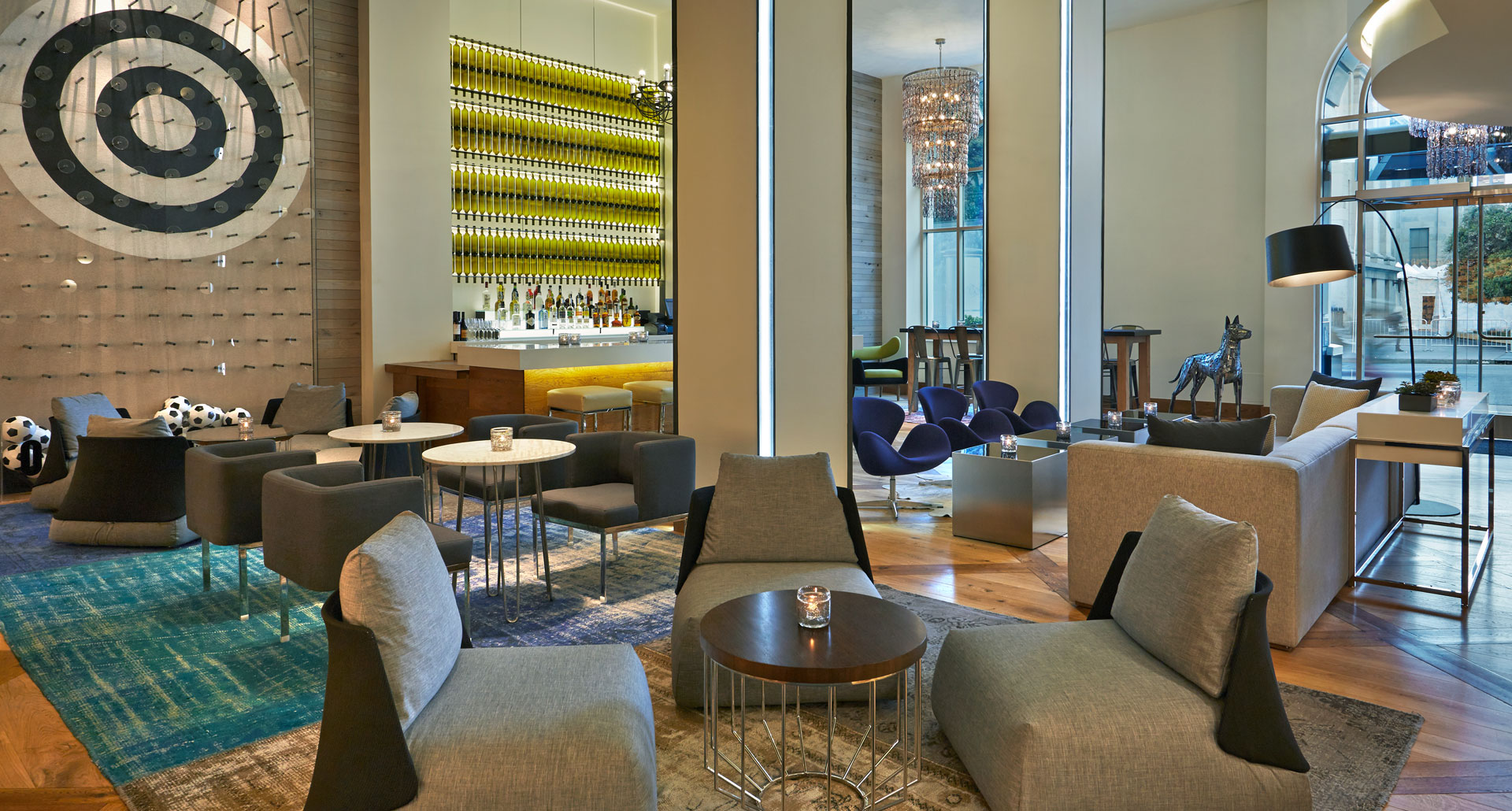 San Francisco’s hotels can be an oddly businesslike bunch, but the Zetta is all about fun. Despite the fact that there’s likely a venture-capital deal or two being negotiated in its lobby’s stylish modernist chairs, the atmosphere is always light, and a wall-sized Plinko game reminds you to play as hard as you work. 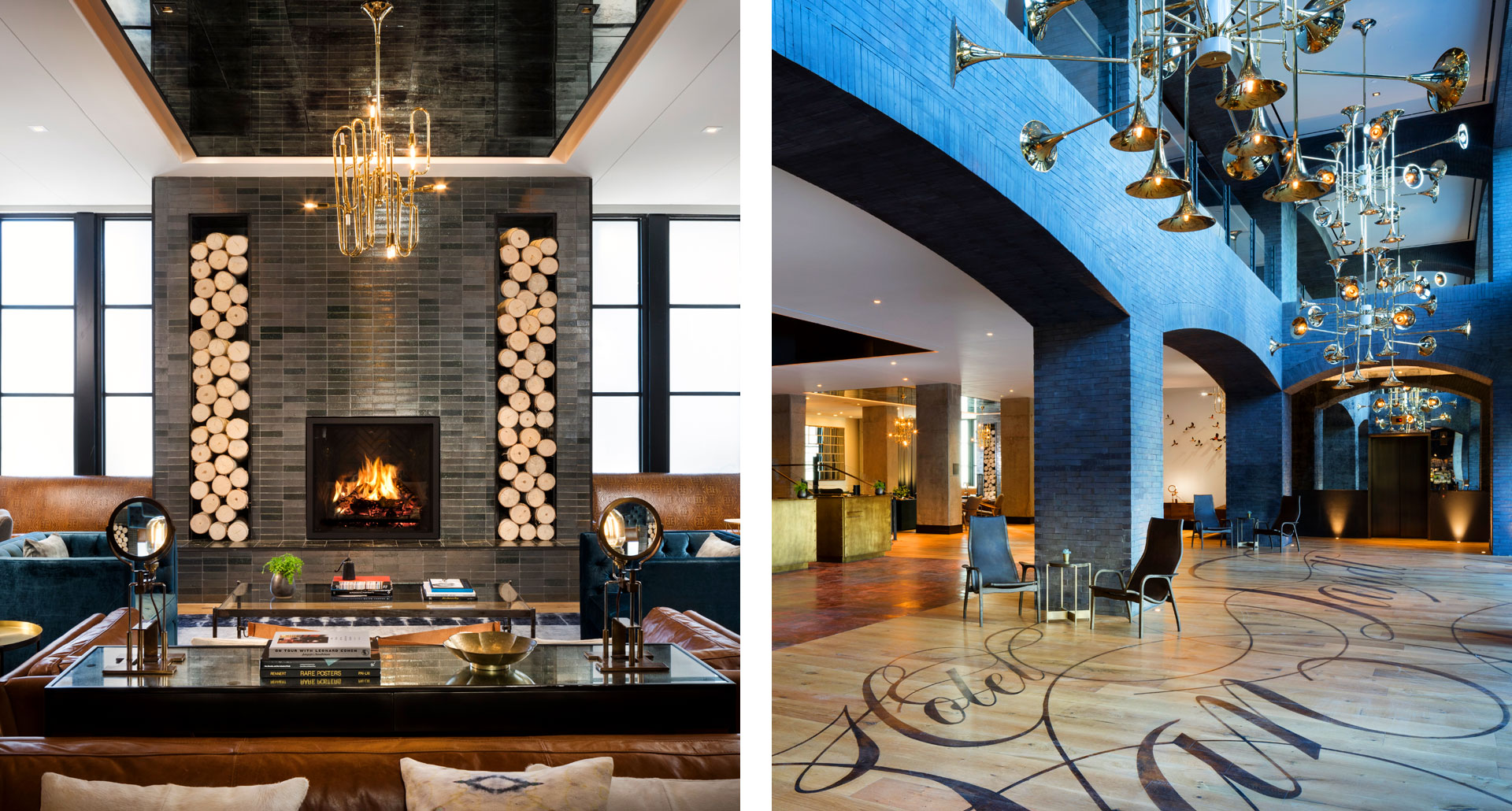 Though the Van Zandt’s lobby does feature some overt references to Austin’s status as one of America’s musical capitals, for the most part it’s a more conceptual resemblance. This is the roots-rock version of a high-end boutique hotel: well-worn, welcoming, unique enough to catch the eye but for the most part immediately familiar. You’ll know at a glance that this is a place you’ll want to spend some unhurried time. 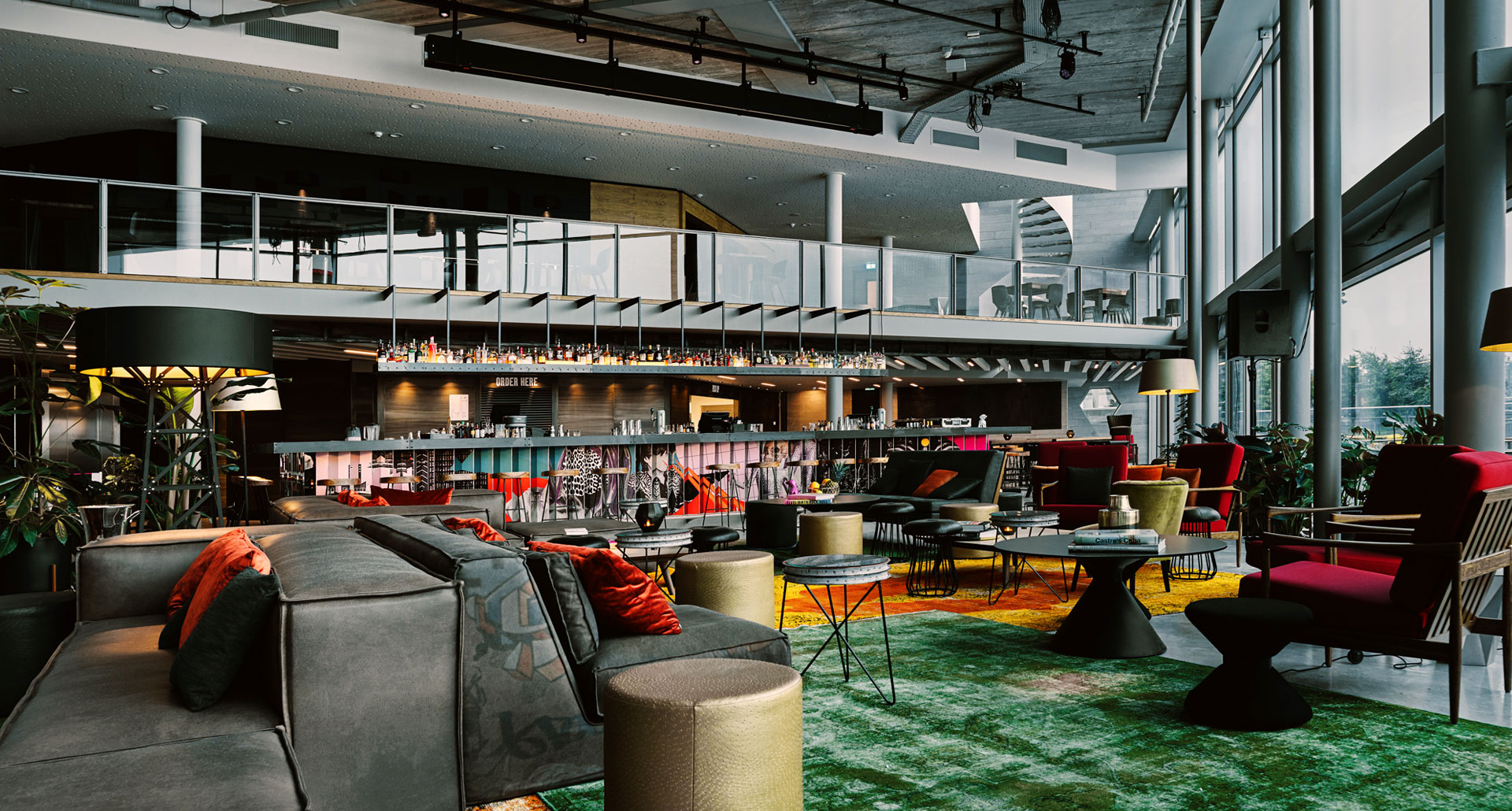 A’DAM Tower in Amsterdam Noord is no wallflower, and neither is this SIR boutique hotel: spanning eight floors, it’s a zany tribute to the imagined lifestyle of a musician-producer-tastemaker just beginning to enjoy some success after years on the road. And its lobby is more than a lobby. Called the Hub, it’s an always-on social space, part cocktail bar, part lounge, where the beat goes on long into the night. 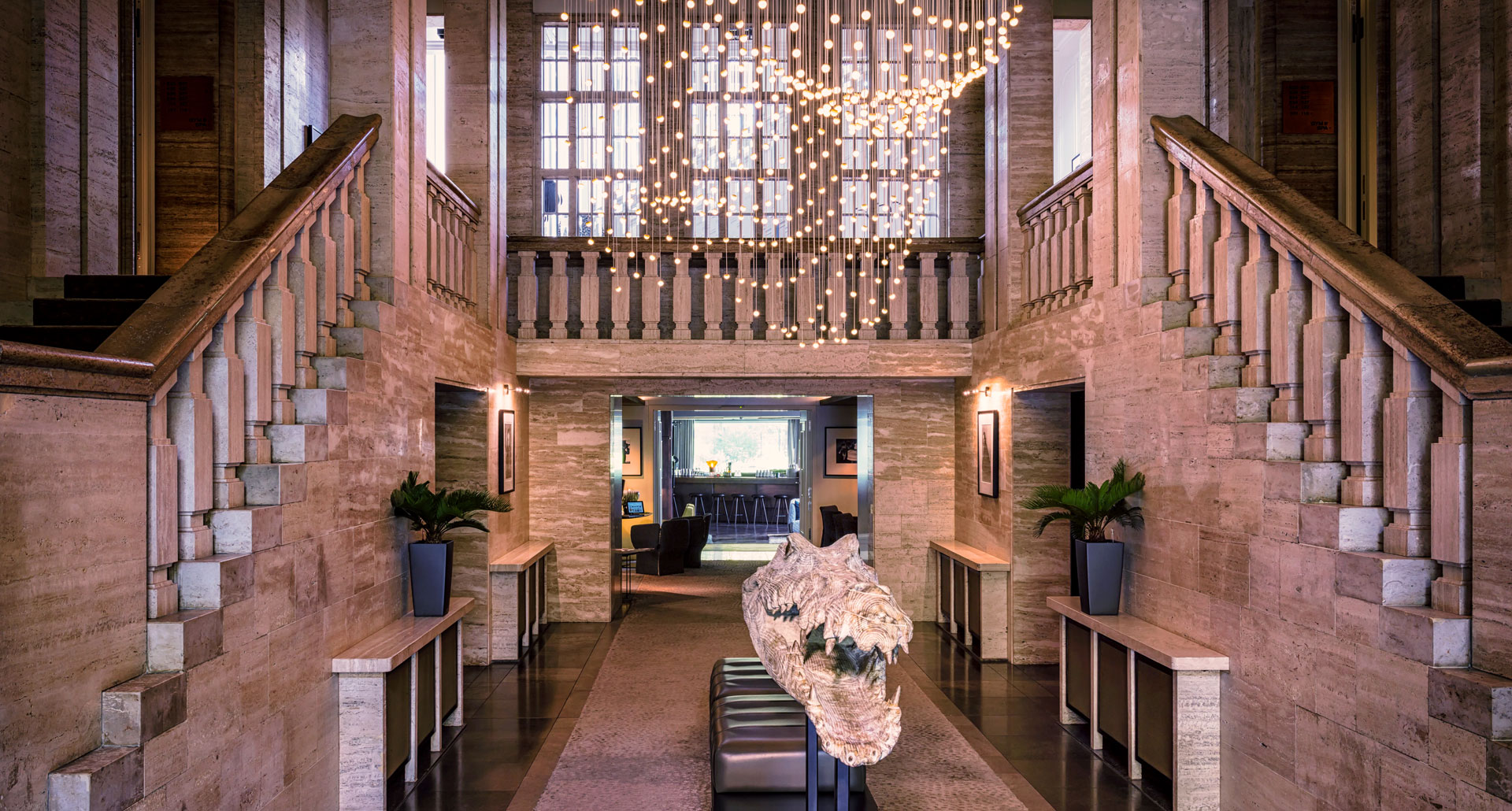 In case the majestic entrance of this erstwhile embassy building weren’t impressive enough, the hoteliers behind Das Stue have added some whimsical touches, like the mounted crocodile head and the sculpturally suspended lighting. It’s a space you won’t soon forget, that’s for sure. 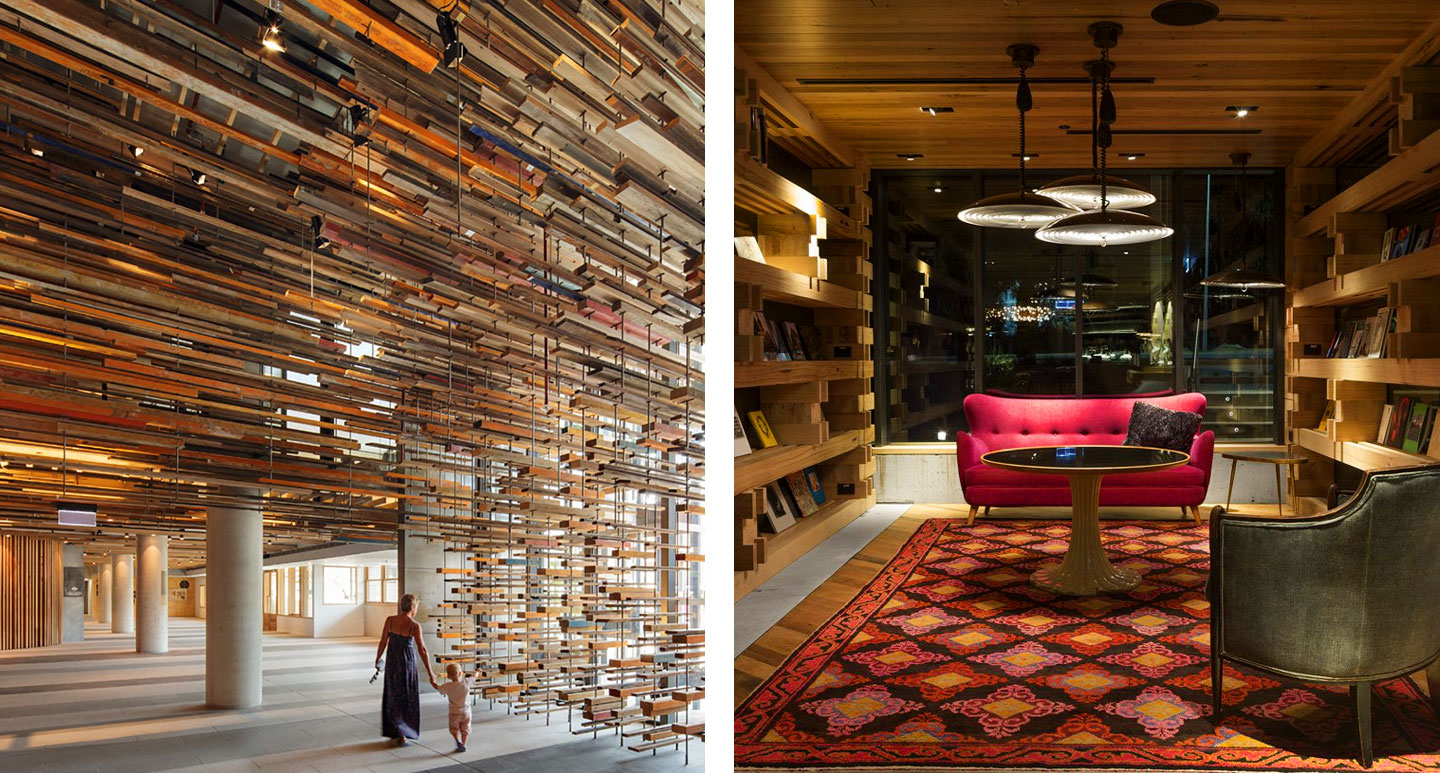 It’s not always clear in this new New Acton landmark where the lobby begins and ends — with public spaces that include gallery space, a cinema, a pilates studio, a bike shop, a spa, and a slew of eateries, Hotel Hotel is in some ways like a miniature city. And its lobby makes its mission plain: this is architecture as art, a transformative experience made from humble concrete and wood, and a stunning vision of the city of the future. 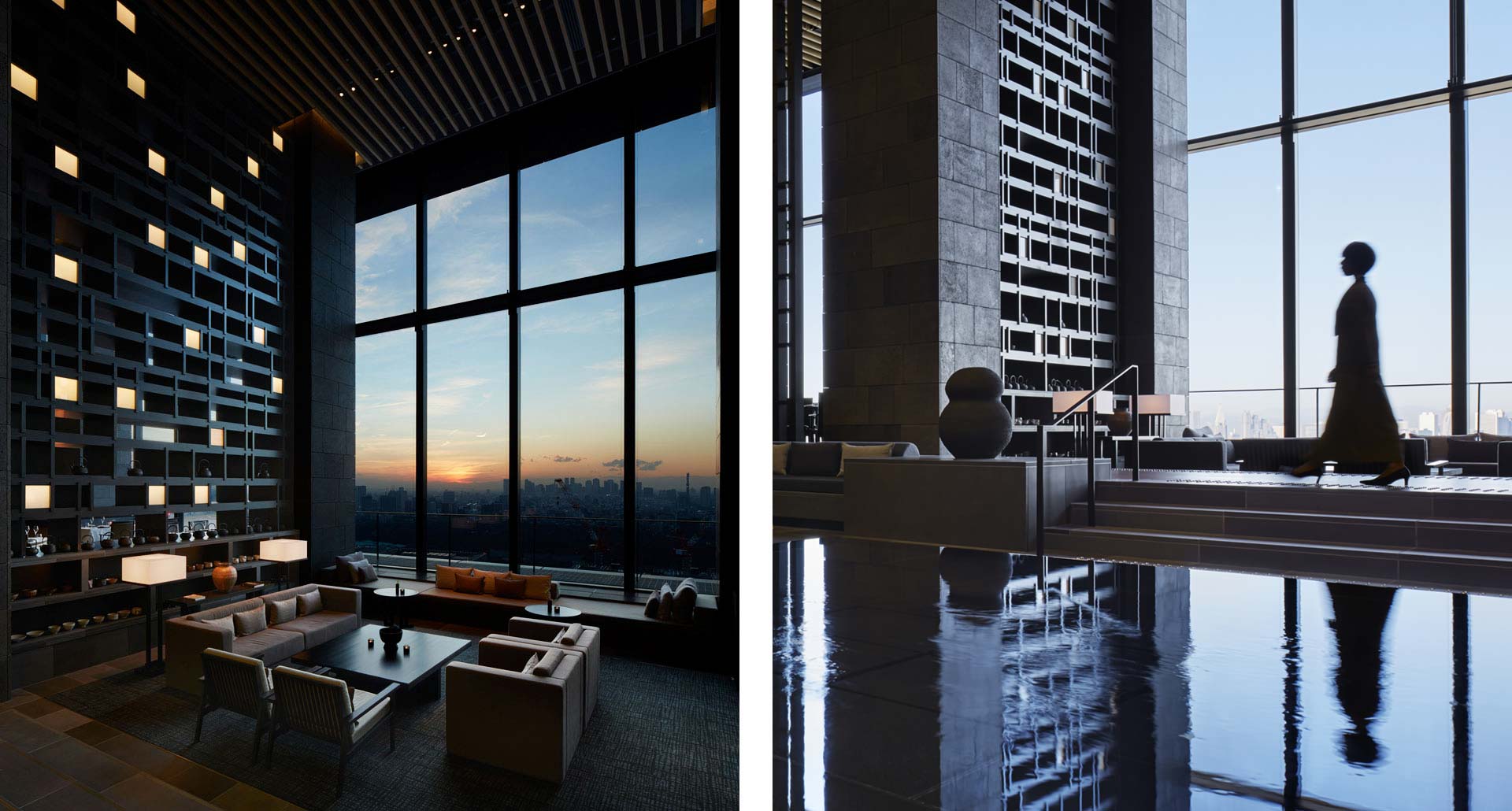 The first Aman hotel in a big city feels as tranquil as its country cousins. It also feels remarkably like some kind of temple, thanks to its decidedly monumental architecture. Located 33 floors above Tokyo, this soaring space is part lounge, part garden, lit from above by a towering column of light. And when you’re talking about Aman you know it’s just a small taste of what’s yet to come — this hotel is pure faultless luxury, from top to bottom. 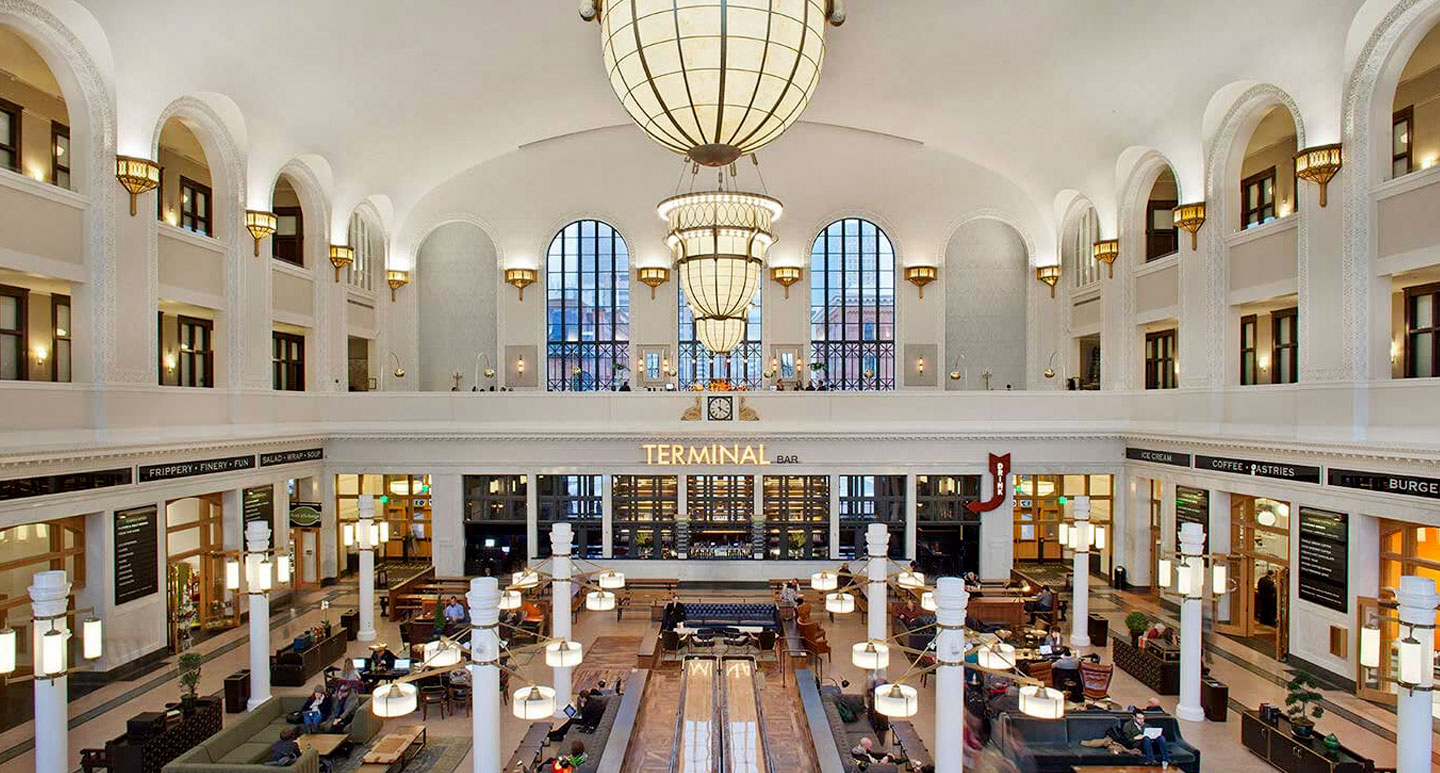 At long last, a hotel lobby that makes good on evoking railway-station grandeur. Not only does the Crawford situate 112 boutique rooms on the premises, its lobby is the revamped Denver Union Station’s waiting room. And what a revamp, we must say: Beaux-Arts curves decorate a 65-foot central hall with design nods to both last century and this. A spectacular space worth waiting for. 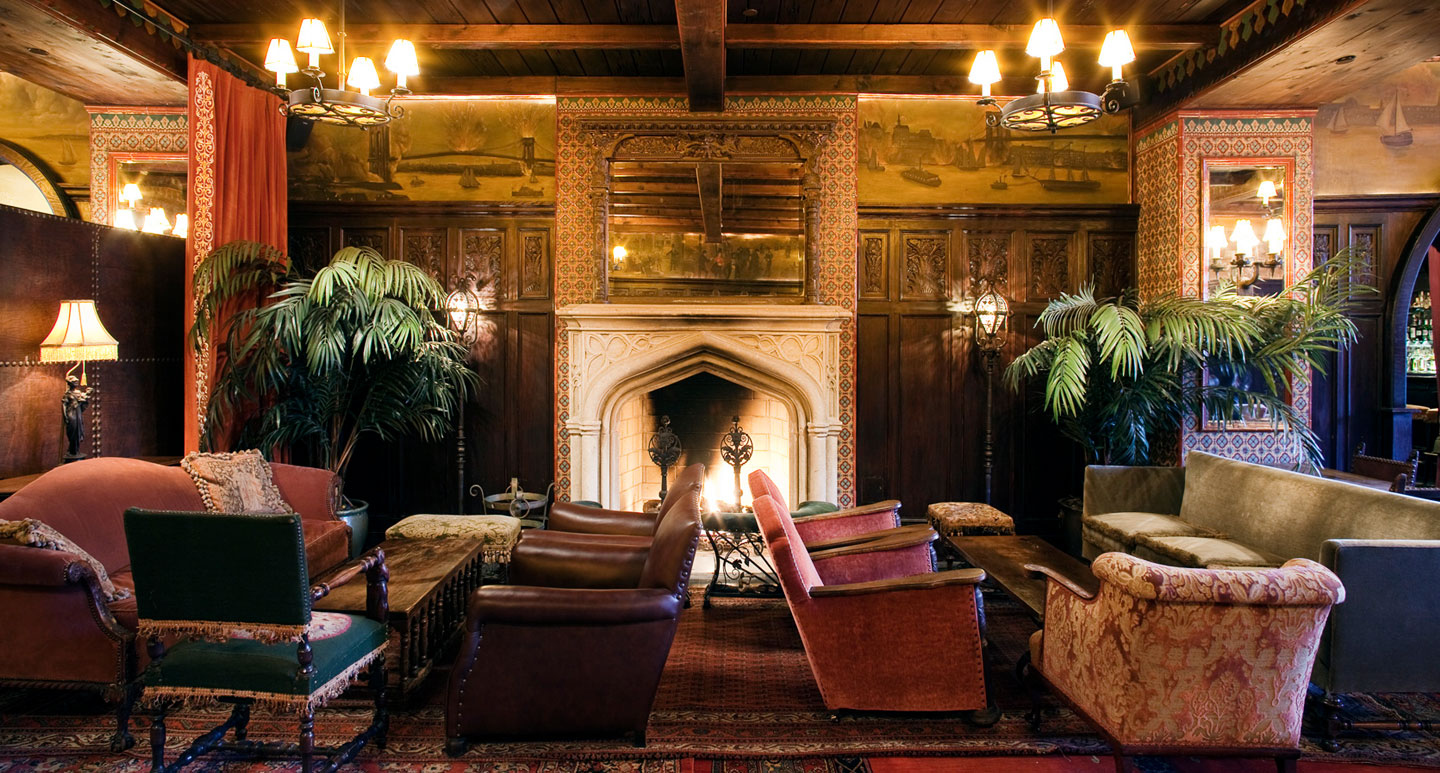 The Bowery’s entry, tucked away from one of Manhattan’s most famous streets, feels at times more like an opium den than an ordinary hotel lobby. That intimacy is what separates it from the more visually expansive lobbies on this list, and also what makes it a consensus favorite. Bowery’s lobby more or less singlehandedly brought overstuffed bohemian charm back to a hotel scene that was getting a bit too austerely minimalist, and the end result feels decadent in the way a New York hotel should.

Know a few other hotel lobbies you think should be on this list? Let us know in the comments below.