By taking inspiration from its wilder, more untamed roots, golf has the potential to be mentioned alongside sports like — don’t laugh — skiing and surfing. Given its reputation, that might be exactly what it needs.

When I tell people I love golf, I’m careful to explain which version I’m talking about. Because there are a lot of different versions out there, and some of them have a remarkably poor reputation.

In its early days in Scotland, golf was an adventure — as boundless as skiing, as unpredictable as surfing, as different as you can imagine from how it’s widely perceived today. It was raw and uncomplicated. Imperfect and unpolished. A rugged battle between man and mother nature. There was no refuge from the elements and, in fact, overcoming the elements was very much the point. There’s even a famous Scottish saying: “Nae wind, nae rain, nae golf.”

For centuries, golf courses weren’t really constructed. They were found. Golf holes grew up on land that was the most daunting and exciting to play golf upon. Tucked between civilization and the sea, the great links were crafted by the ages; millennia of sand and surf and wind and rain combining to create a wild landscape of humps, bumps, hummocks, and hollows. The ball bounced and rolled indiscriminately on the rumpled ground, and players had to accept their relative lack of control over its final resting place.

With no gadgets to gauge distance or heavy machinery to move the earth — and no electric carts to ferry them gently to and fro — golf’s original contestants were forced to embrace boldness, bother, and uncertainty.

A 30-foot high dune? Let’s hit over it!
Not able to see where your ball landed? No problem, that’s part of the charm.
No fair? There’s no such thing.

Nature has no sympathy, and neither did golf. Beating your opponent was the goal, and the courses were chaos agents in that pursuit. Bad breaks and random results were an accepted part of the game. No shot deserved any particular outcome, no matter how well-struck.

Lucky for us, this more untamed version of golf actually still exists, and its peculiarities are making a comeback. Many of those old courses are still around (and still don’t have carts); many newer courses adopt the same principles. And many who play the game still play it with the same uncluttered, organic spirit. But unless you’re from the UK or Ireland, it’s probably not the version of golf you’re most familiar with. And it’s rarely the one being promoted on your television every weekend.

This other version of golf presents itself as a sport for those who are trying to avoid all the discomfort of playing a sport. It’s been stripped of its edge and had its quirkiness sanded away. It’s been bogged down with an over-reliance on accessory and technological assistance. It’s divorced itself from community, and prioritized the emotions of the individual. It’s been made an ornament to other endeavors like binge drinking, status seeking, and real estate development. And that wild randomness described above — that’s been chased off, replaced by an obsession with perfection and predictability.

For the past couple of decades, though, golf’s tide has been turning back toward its roots, away from wasteful over-conditioning and needless frivolity. A growing number of players are demanding courses that lie easy on the land and experiences that are less inward-looking, and more in commune with the surrounding environment. They’re demanding a version of the game that’s accessible, sustainable, natural, imperfect. A version that’s basically the opposite of its reputation.

During the pandemic, golf experienced a surge in popularity due almost entirely to its playing fields: vast, uncrowded, outdoor spaces. There were scores of new participants, mostly younger. With concerns about sanitation and social distancing, golf courses had to make adjustments when they reopened in 2020. For many, gone were the electric carts and the bunker rakes and much of the attendant frippery that can clutter the game. It was a welcome return to simplicity.

As someone who writes about hotels for a living, it’s a bit ironic for me to be waxing poetic about golf being less accommodating. Resort golf especially tends to value comfort and convenience (and a fair bit of contrivance, too). But as much as it pains me to admit it, one of the beauties of golf is that there are versions of it for everyone: young or old, healthy or hobbled, serious or casual. It’s a pastime for a lifetime. You can play it in the manner I’ve championed, or you can plop your butt down in a golf cart with a bag full of appliances and a bucket of ultra-light beer.

I just wish the latter was the exception and not the expectation.

Golf has the potential to be an activity celebrated for its consciousness and its connection to the land. It can rediscover its spirit of adventure and its inherent respect for nature. Like skiing and surfing, it can be liberating and intrepid and even fashionable. Golf might never be listed equally alongside those sports, but it doesn’t have to be so far out of the conversation. All the elements are there, even if the human one sometimes needs a little work.

Golf courses are one of the world’s most popular hotel amenities, and quite a few Tablet hotels cater to golfers in some measure. You can use our Take Me Away machine to search every hotel in our selection that has golf nearby. Below, you’ll find nine Tablet hotels that are connected to some of the author’s favorite golf courses. 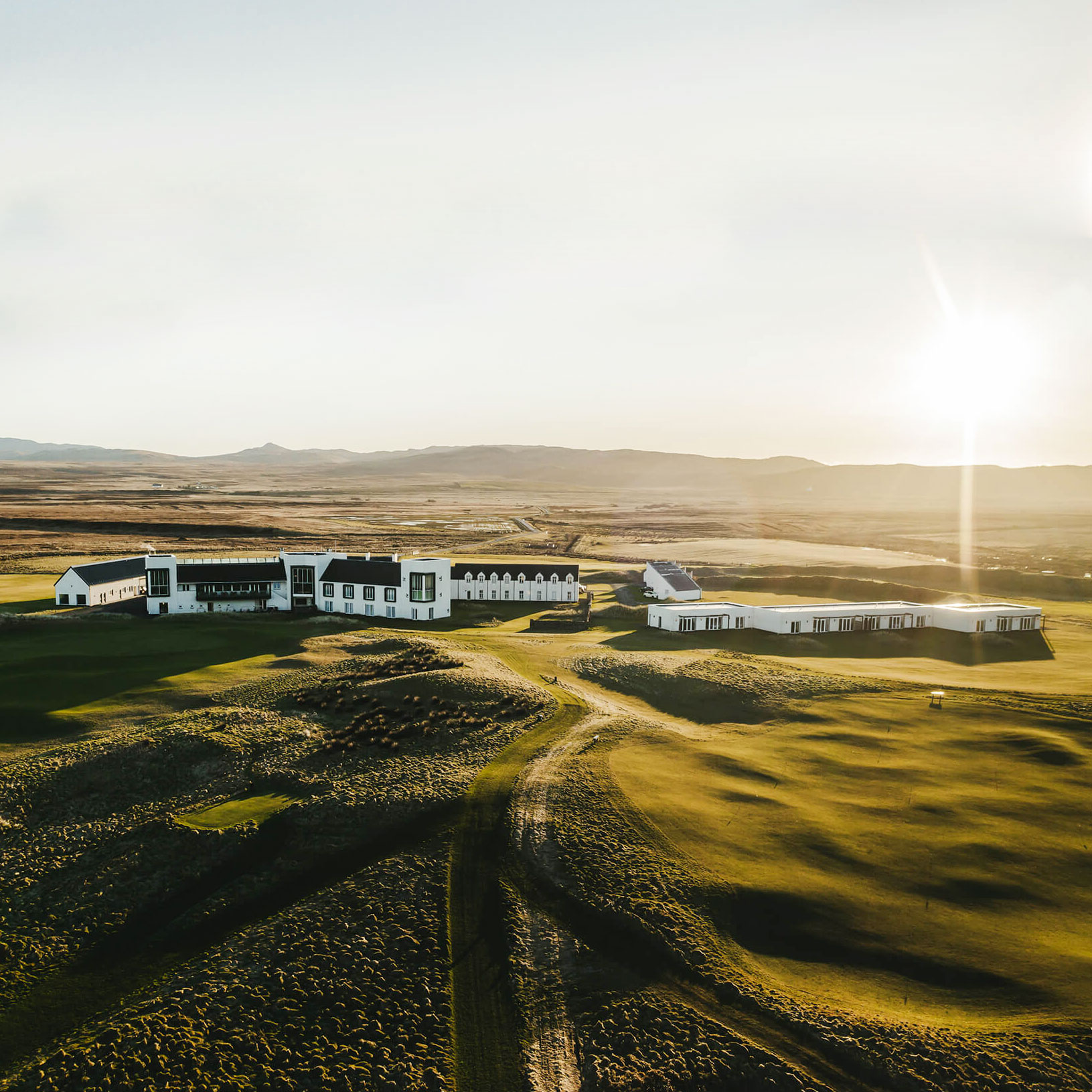 Golf purists will recognize the appeal of a trip to Islay rests not on a hotel, but on the Machrie Links, a fabled Willie Campbell course that dates back to 1891, and is basically the epitome of everything championed above. The Machrie Hotel is hotelier Gordon Campbell Gray’s first in Scotland, and it’s fantastically luxurious but impeccably tasteful about it, and historically aware but never old-fashioned. 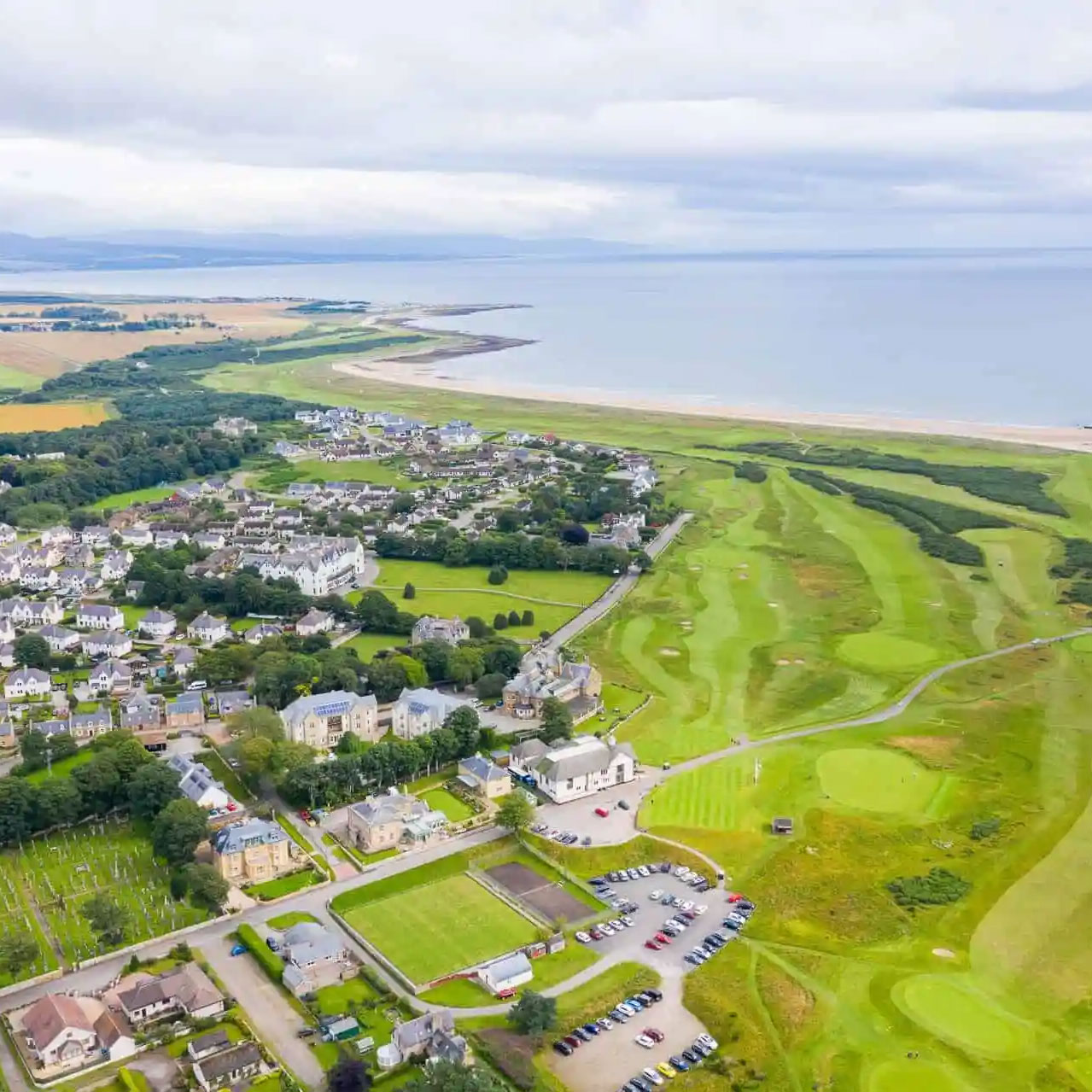 Dornoch, an hour to the north of Inverness in the Scottish Highlands, has a bit more going on than just golf, but the Links House at Royal Dornoch makes its priorities plain — the first tee of one of the world’s greatest links is a mere fifty feet from its door. The hotel has just 15 rooms, but it’s got personality for days — the main house, in distinctive Sutherland sandstone, dates back to the 1840s. 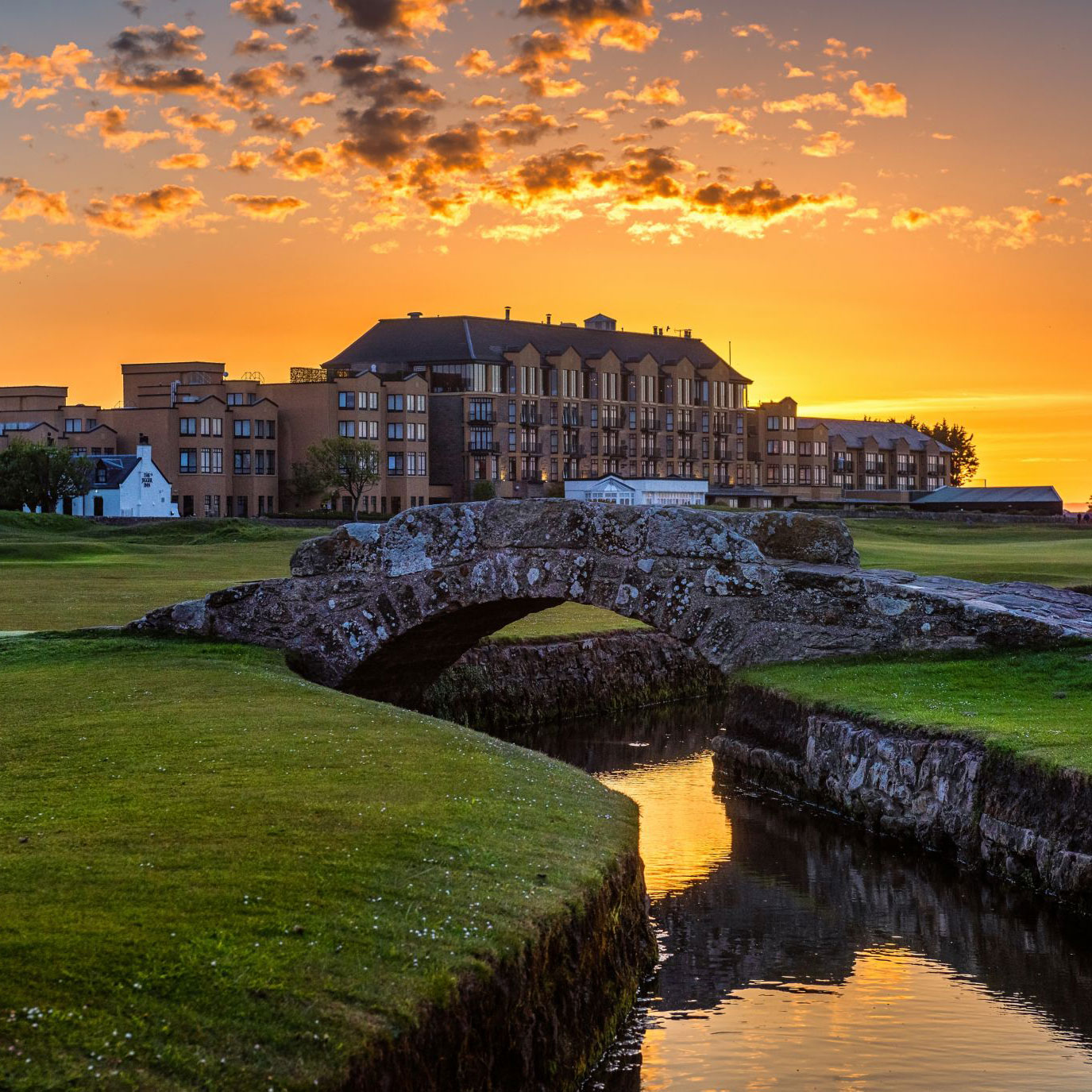 Presumably it’s only golfers who will be interested in the Old Course Hotel; a few of you may just be mad for the hills of Fife, but most are here to see the birthplace of the game as we know it. The Old Course at St. Andrews is not just any old course, but (arguably) the original course, and the Old Course Hotel stands so close to these ancient links you’re actually encouraged to hit over it on the 17th hole. 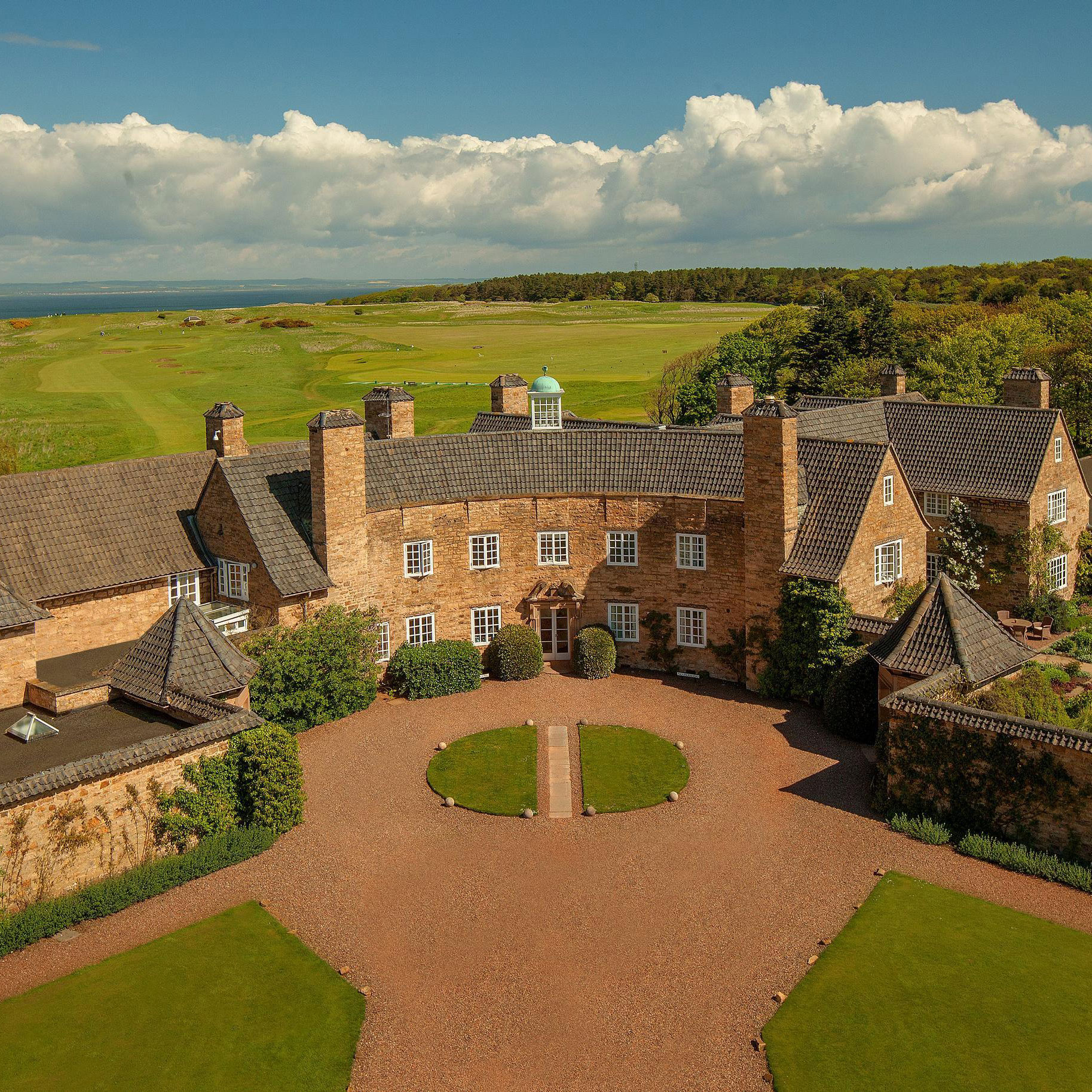 Greywalls, a stunning Arts and Crafts–style house built in 1901 by the architect Edwin Lutyens, has a rather famous neighbor: the Muirfield golf links, home to the Honourable Company of Edinburgh Golfers, the world’s oldest club. The hotel is allocated a limited amount of tee times at Muirfield, but it’s also within shouting distance of other estimable links like North Berwick and Gullane.

The Farm at Cape Kidnappers 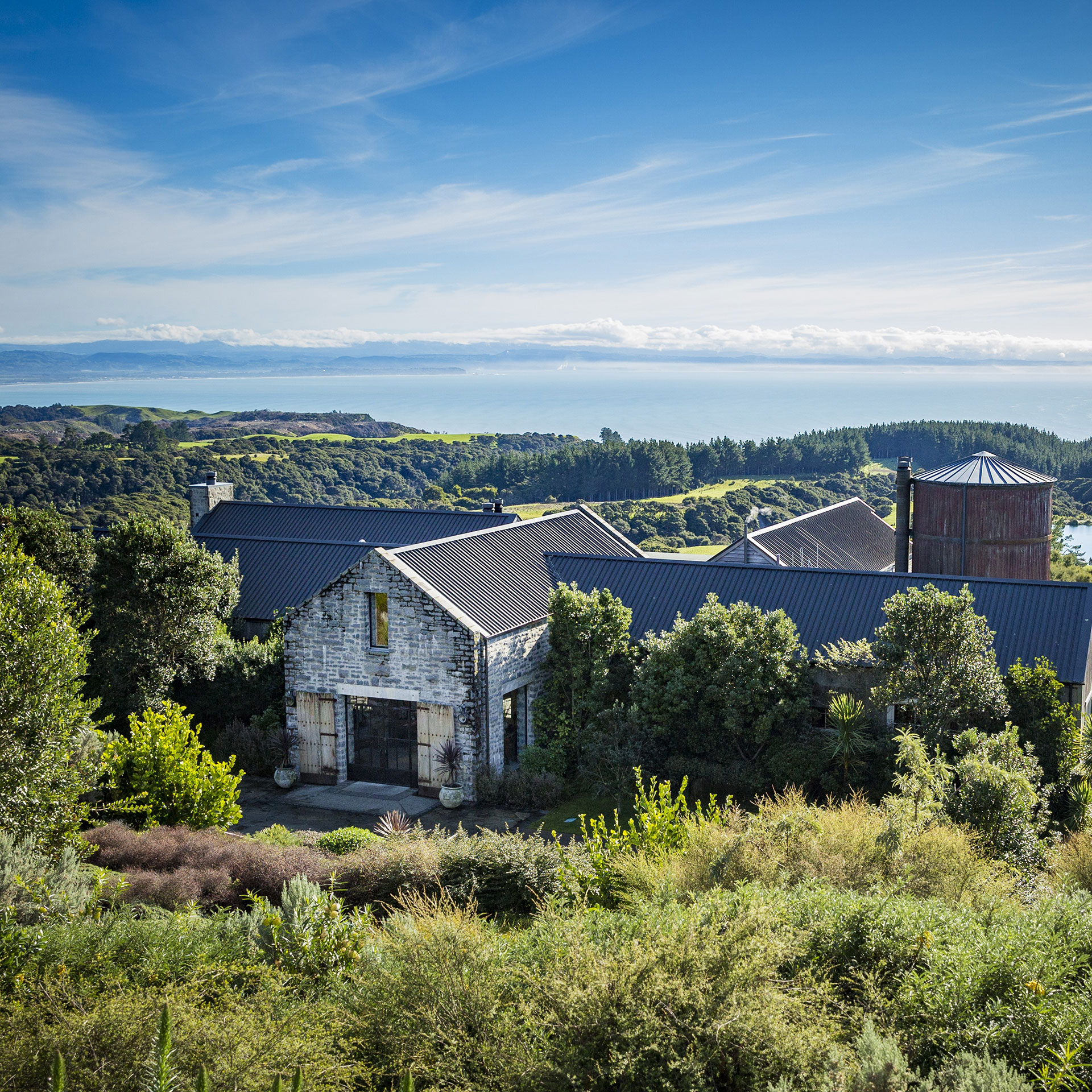 Where else but in New Zealand would you actively seek out a working sheep ranch for a bit of rural high luxury? This particular sheep ranch, and its unbelievably dramatic golf course (designed by visionary architect Tom Doak), lies not on some dull green hillside but on the headlands overlooking Hawke’s Bay — a stunning setting in a country that’s not short on stunning settings. 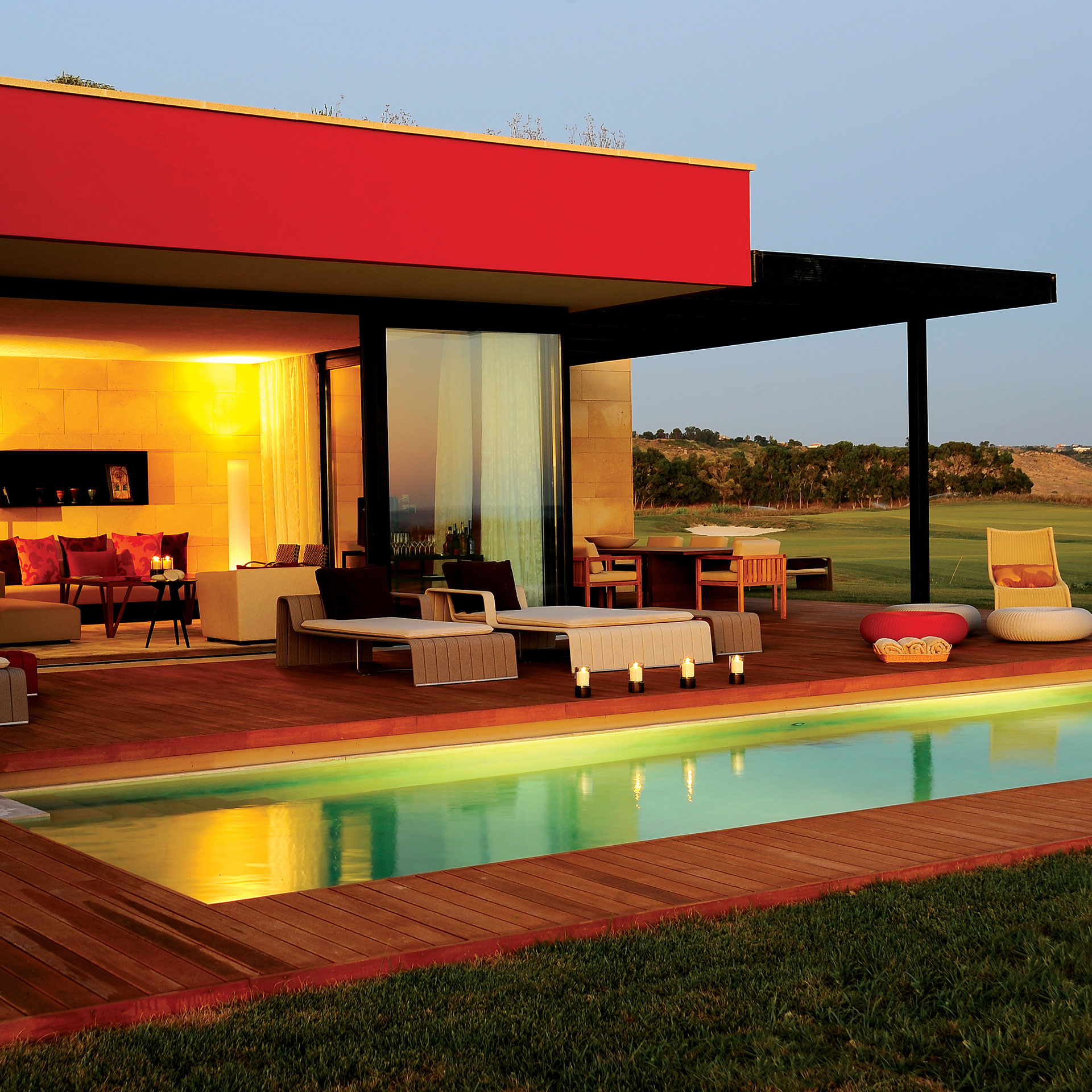 If golf isn’t quite the first thing you think of when you think of Sicily, you’re not alone. But thanks to the work of prominent course architect Kyle Phillips, designer of Scotland’s Kingsbarns, it’ll soon seem like the most natural association in the world. There are 45 excellent holes of pure seaside golf at Verdura, all against the beautiful backdrop of Mediterranean Italy’s olive country. 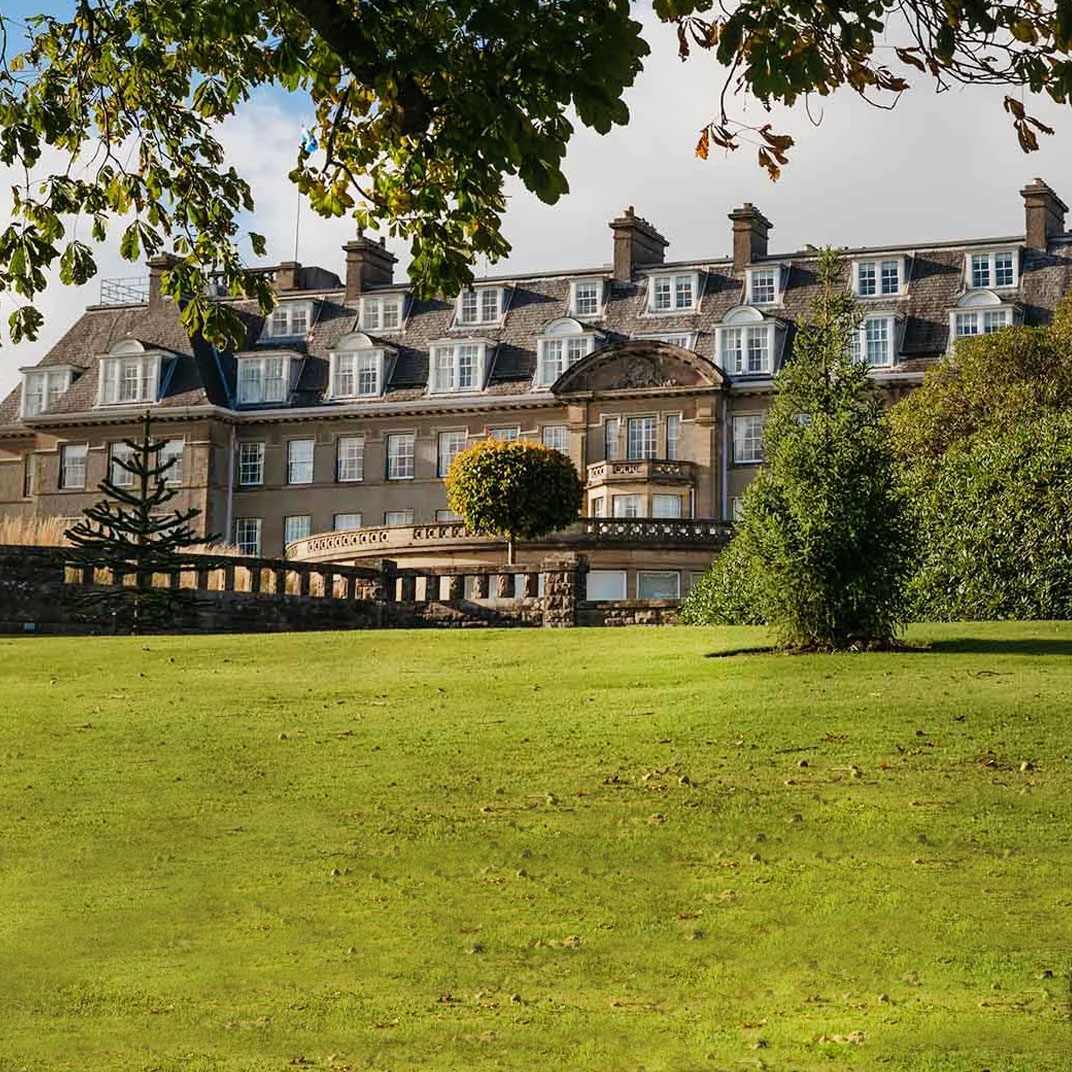 Golf is obviously the big draw at Gleneagles (though non-golfers will love the grand hotel and the warm Scottish hospitality). The King’s Course, which dates back to 1919 and was designed by the legendary James Braid, is the resort’s crown jewel, and perhaps Scotland’s best inland golf courses. There are 45 more holes on the property, including the charming Queen’s course and nine-hole Wee Course. 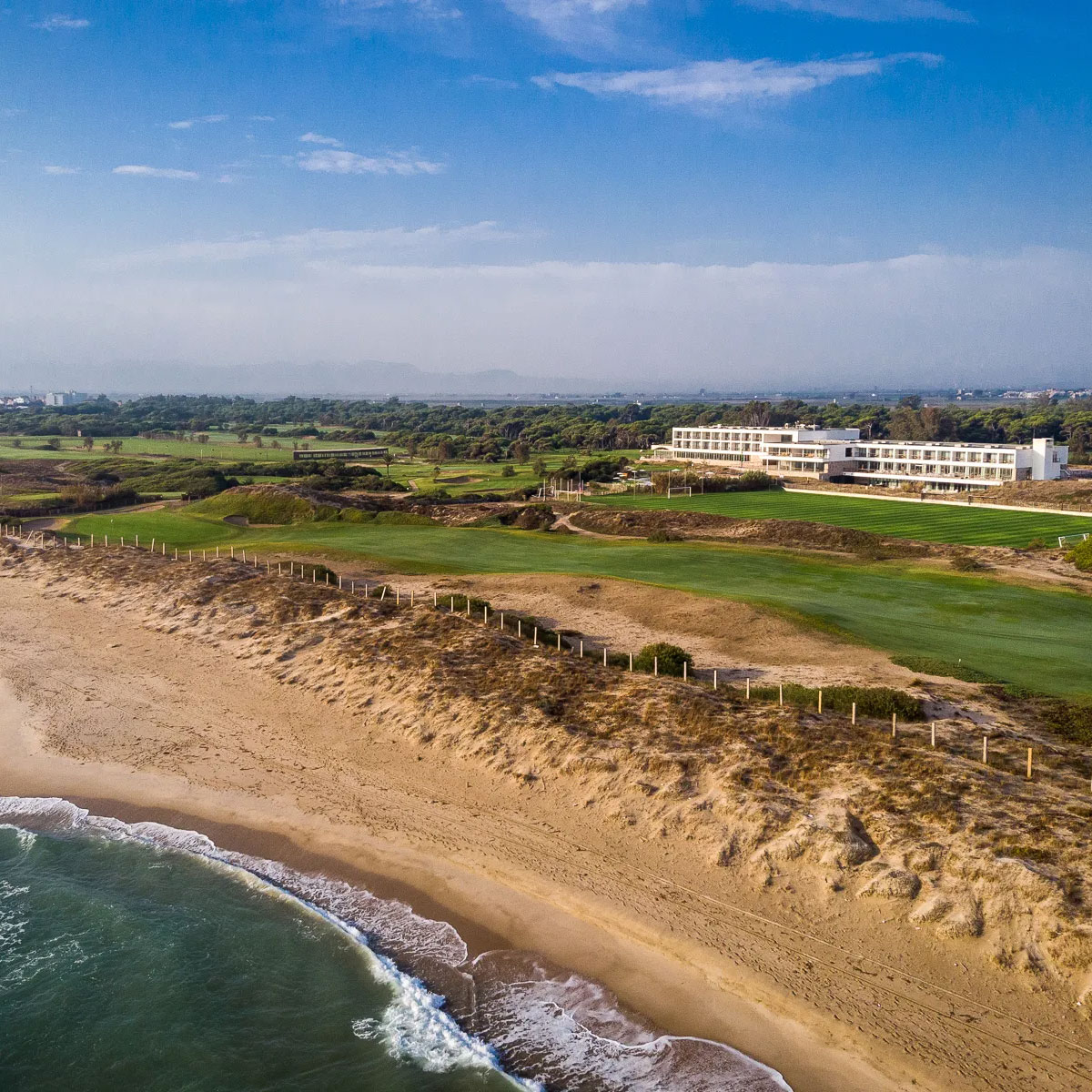 Set within the Albufera, a national park, on the coast just to the south of the city of Valencia, El Saler is one of continental Europe’s most highly regarded golf courses. And the hotel, it must be said, is an impressive one as well: an imposing modern edifice, stretching out along the coast. Rooms come with vast windows, and many feature balconies that face out to sea. 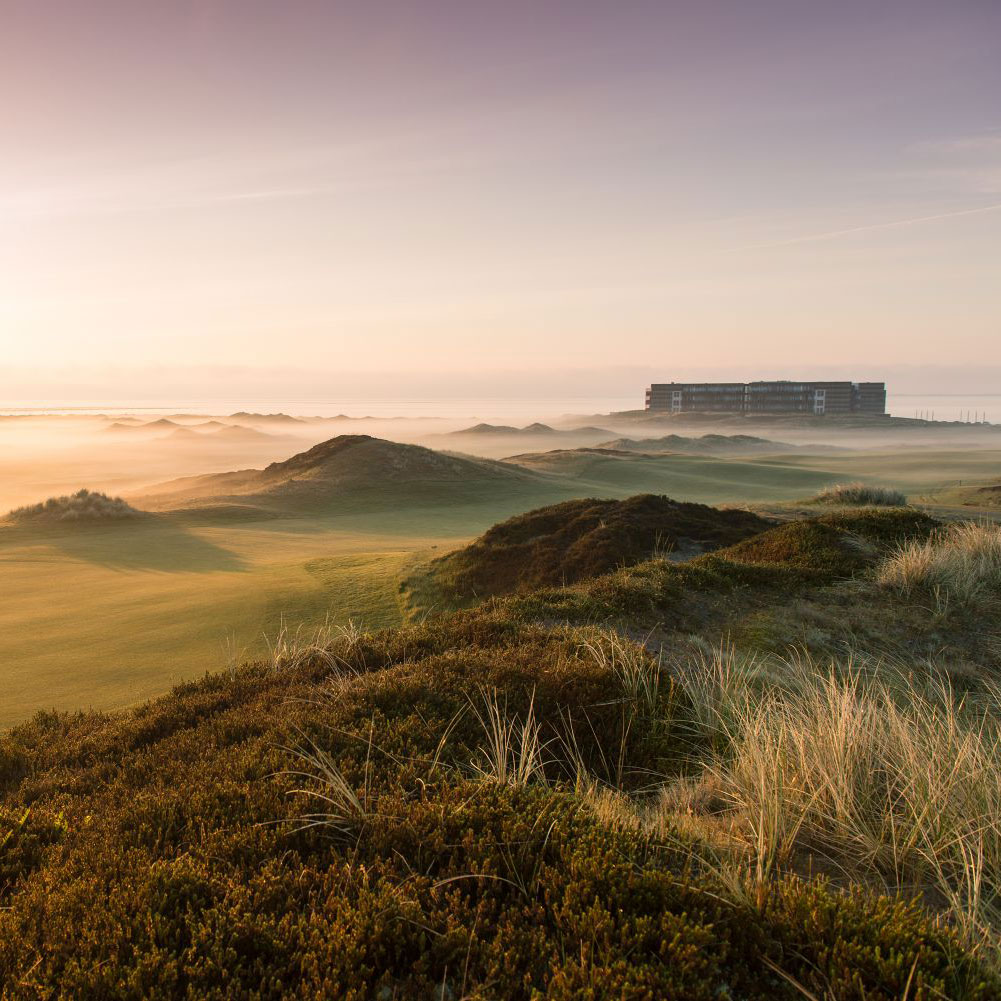 The northernmost of Germany’s islands, Sylt is best known for its vast, sandy beaches. But one of its major attractions lies on the mainland-facing side. Budersand is home to an award-winning golf course, built in links style along the coast — and it’s also home to an impressively luxurious hotel. The crisp, contemporary rooms make the most of the sun and the sea views.