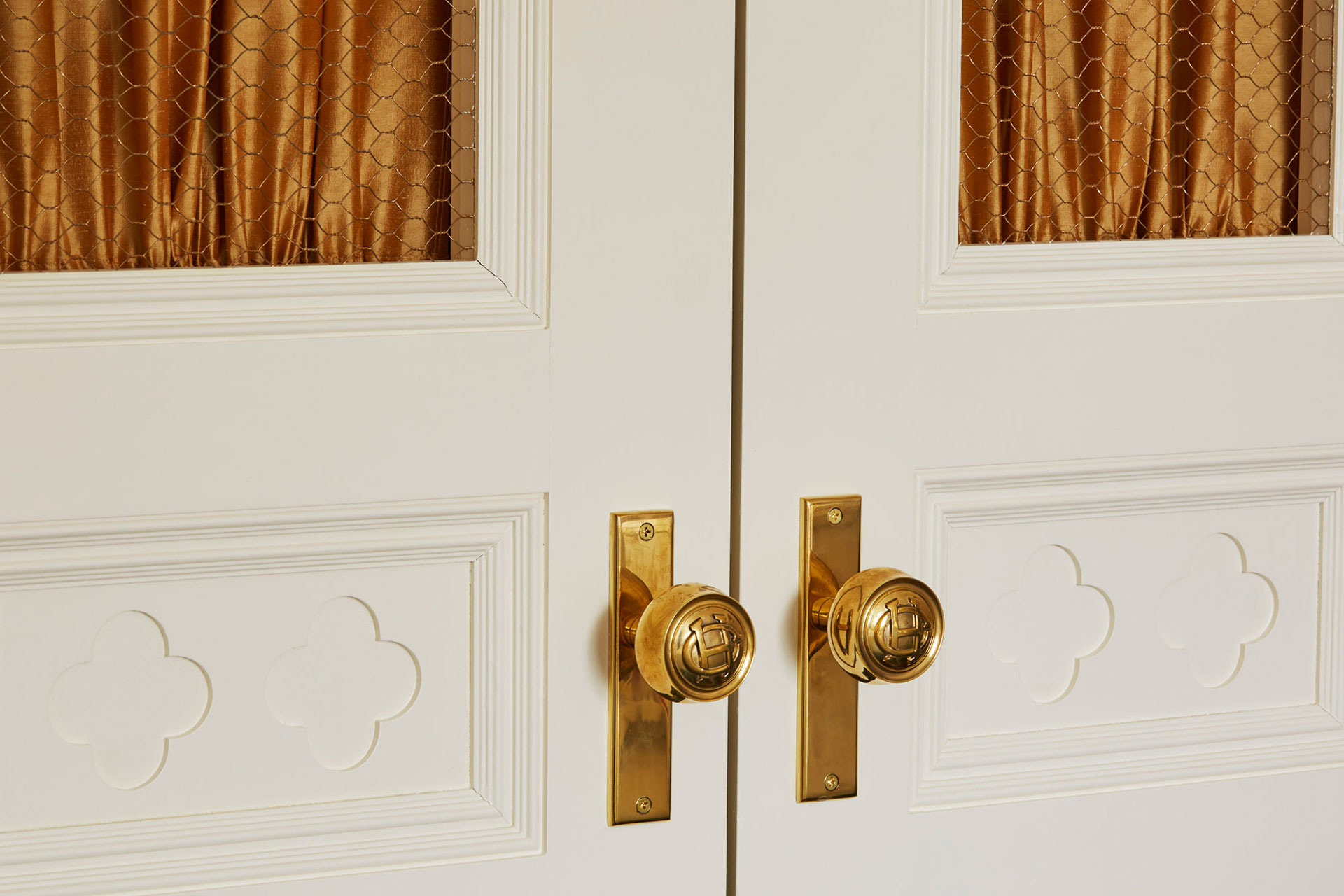 The Chelsea Hotel is back. The New York landmark and one-time home to dozens of the city’s most famous residents has been reinvented and is being slowly revealed. Here’s a sneak preview.

The Hotel Chelsea is one of those interesting thought experiments about the good old days in New York City — about wishing you had been there back then, back when it was all happening, back before everything changed, back before the banks and the Starbucks and the pilates studios camped out on every corner. On the surface, the history of the Chelsea reads like a fairytale of sorts, an almost too perfect confluence of place and personalities. Yet while many of the guests were glamorous, the hotel itself, in its heyday, wasn’t exactly a bastion of first-class accommodation. Some rooms, like the one Leonard Cohen rented during his fling with Janis Joplin — immortalized in the song “Chelsea Hotel #2” — were shabby and dated even by 1968 standards, and that didn’t change much in the intervening years.

None of that has ever mattered, though. The Chelsea was a “house of infinite toleration” where the maids rarely ran their vacuum cleaners, as Arthur Miller explained in his essay, “The Chelsea Affect.” Residents got out of each room what they put into it, making a DIY wonderland from the bones of the brilliant old building. The spunk and soul of its inhabitants made the hotel legendary, just like Soho lofts in the ’80s, Village walkups in the ’60s, or Williamsburg warehouses in the ’00s. To want to revisit these periods is to want to be young again, when we’d happily concede certain comforts in exchange for action and intrigue and the promise that we’d have absolutely no idea what might happen next.

But do we really want to go back? Or do we just want to be a tourist to the good times, skipping all the boring bits and unpleasant parts? Because while the Hotel Chelsea is the place where Bob Dylan stayed up for days to write “Sad Eyed Lady of the Lowlands” for his new wife Sara, and where Miller resurrected the ghost of Marilyn Monroe for his play After the Fall, and where Patti Smith came of age with Robert Mapplethorpe. It’s also the place where Dee Dee Ramone lured heroin addicts like a magnet, where Dylan Thomas spent his last few torturous days, and where Nancy Spungeon bled to death from a stab wound to the stomach. Do we really want to go back? 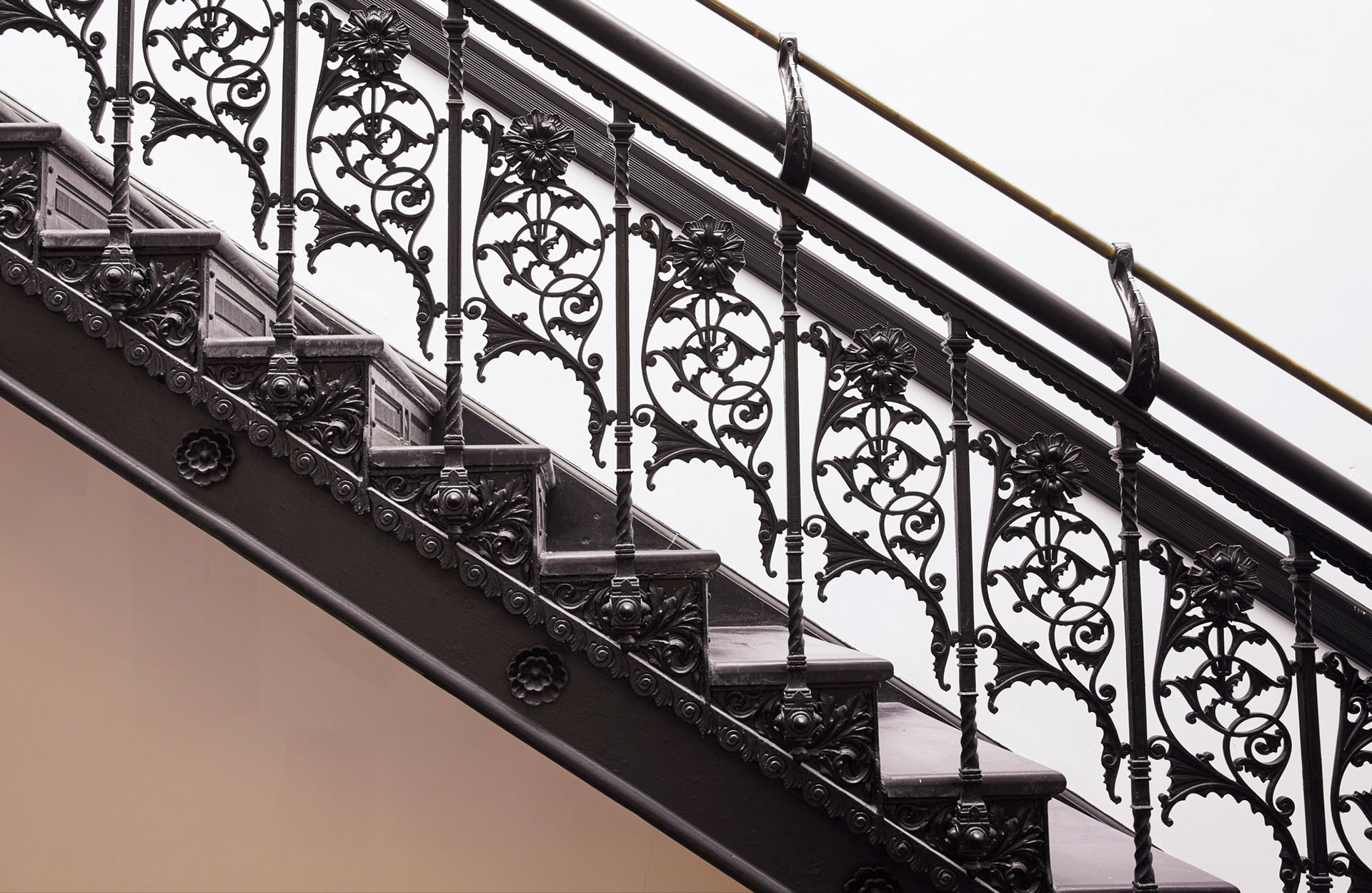 These are the questions the new Chelsea asks. Not explicitly, but simply because the iconic property has been irrevocably changed — reinvented by acclaimed hoteliers Sean MacPherson, Ira Drukier, and Richard Born as the kind of impossibly cool luxury boutique hotel in which they specialize. To call this new direction controversial is an understatement. There were plenty of folks (most notably the Chelsea’s long-term tenants) who wanted the hotel to remain as it was, accessible to a whole new generation of artists. That’s a noble goal that even we could get behind — though it’s not clear it was ever in the cards. New York is different, and even the same old places aren’t the same. For NYC in the early 21st century, the Chelsea’s evolution is an expected one, similar to its shift in the early 20th century from co-op housing to long-stay hotel.

In an ironic but somewhat unavoidable twist, that’s the era the owners most represented here. Their Hotel Chelsea does go back — back before the celebrity parades to a time that recalls its founding more than its bohemian later days. It leans on its pop mythology, but it doesn’t depend on it. It’s a new beginning for the hotel, a fresh chance to create a hundred more years of cultural history. We’ll leave it to others to debate whether anything should’ve been changed in the first place. It’s our job to celebrate hotels, and the Chelsea’s is one of the most celebrated hotel openings in decades. 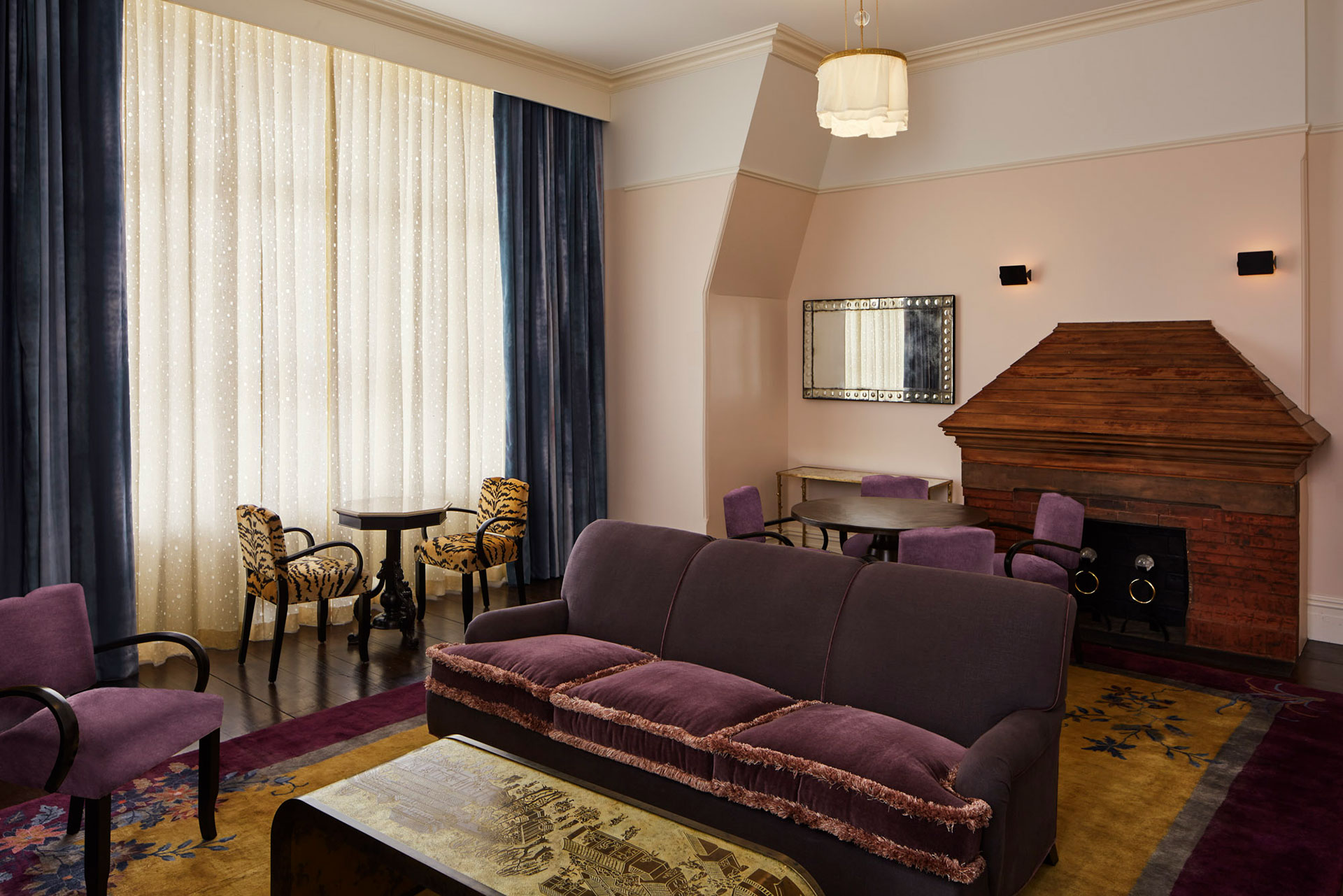 America doesn’t yet have as many storied, generational hotels as other, older countries. Its most famous hotels are notable less for their age or nobility and more for, let’s face it, the untamed behavior of their most notorious guests. The Chelsea combined that libertinism with an incredible track record of artistic achievement. In addition to the output from Dylan and Miller, Thomas Wolfe wrote You Can’t Go Home Again at the Chelsea. Jack Kerouac wrote parts of On the Road there. Warhol filmed there, and Arthur C. Clarke worked on the screenplay for 2001: A Space Odyssey there. And the list goes on.

To follow the hotel’s history is to draw a line in American pop culture from Mark Twain to Madonna — all of whom stayed at the Chelsea, many of whom spoke about it in terms sometimes glowing, sometimes apocalyptic, always in a way that painted a picture of a vibrant and creatively fruitful community that jumped from storied epoch to epoch. The last decade was not one of them. After a sale in 2011 and a round of hot-potato between owners, the Hotel Chelsea was a run-down landmark building with a 120-year tradition that had nearly stopped cold. Now, in 2022 — under the same stewardship as longstanding Tablet favorites like the Maritime and the Bowery — it is without a doubt the most exciting brand new old hotel in New York City.

Not everything has changed at the Chelsea. The lobby, less chaotic than it once was, is still a mélange of modern and abstract artworks, gifts from guests and tenants over the years who famously paid with paintings when cash was short. That carries through upstairs, where you won’t find William Burroughs mumbling around the hallways, but you will find rooms bedecked with art from the hotel’s endless collection. They retain the longtime spirit of the hotel but with a bit more intention to the interior design. 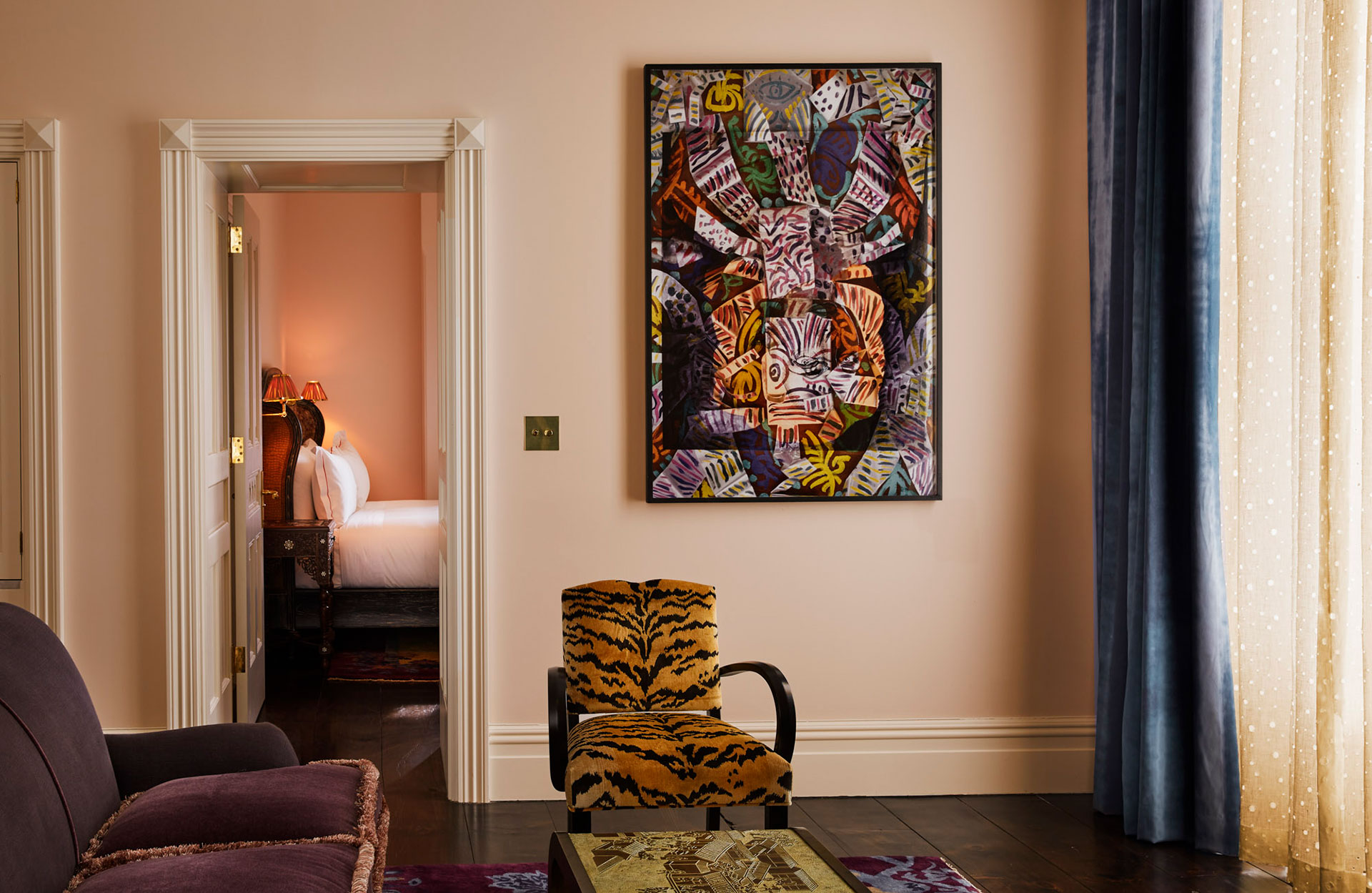 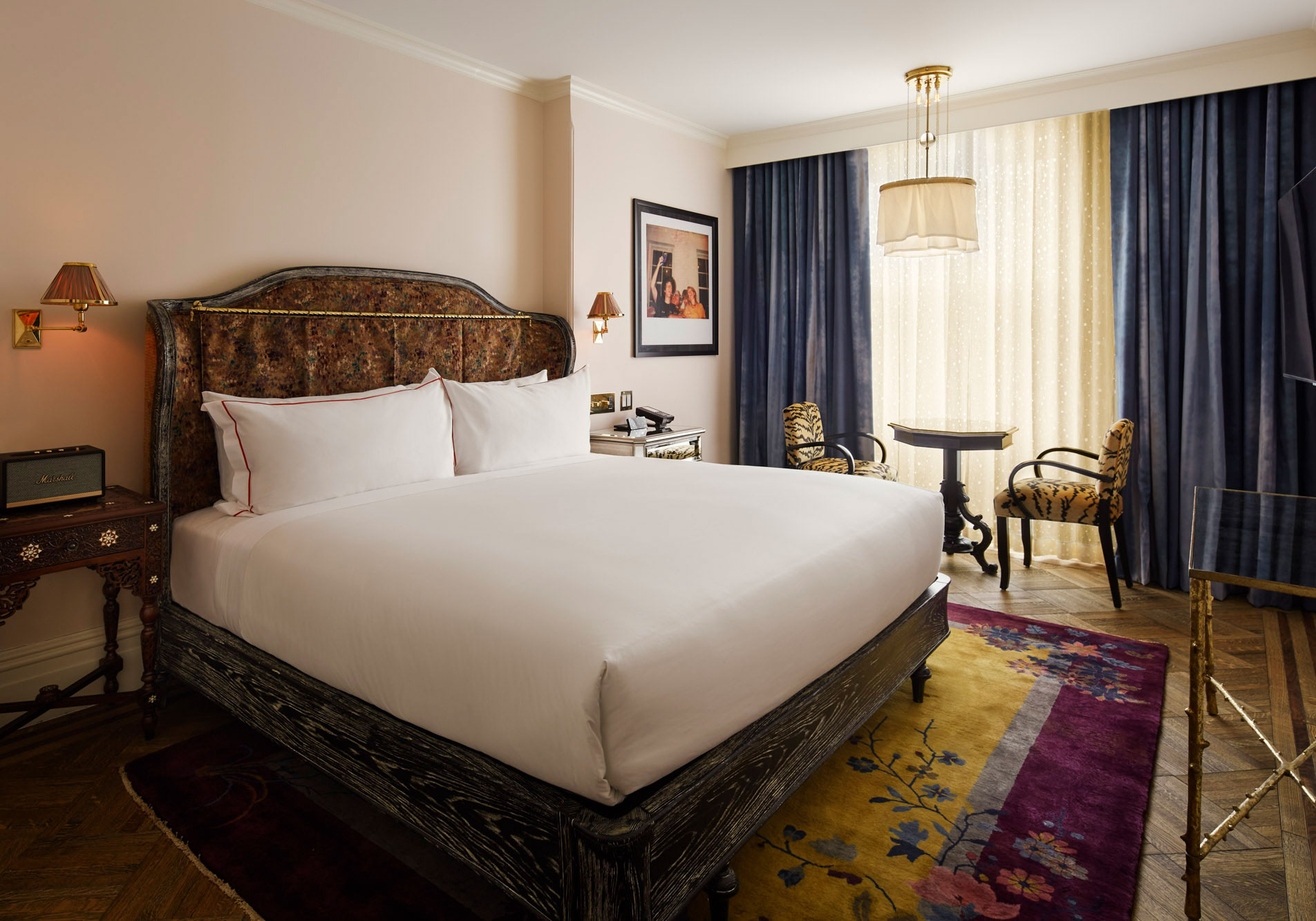 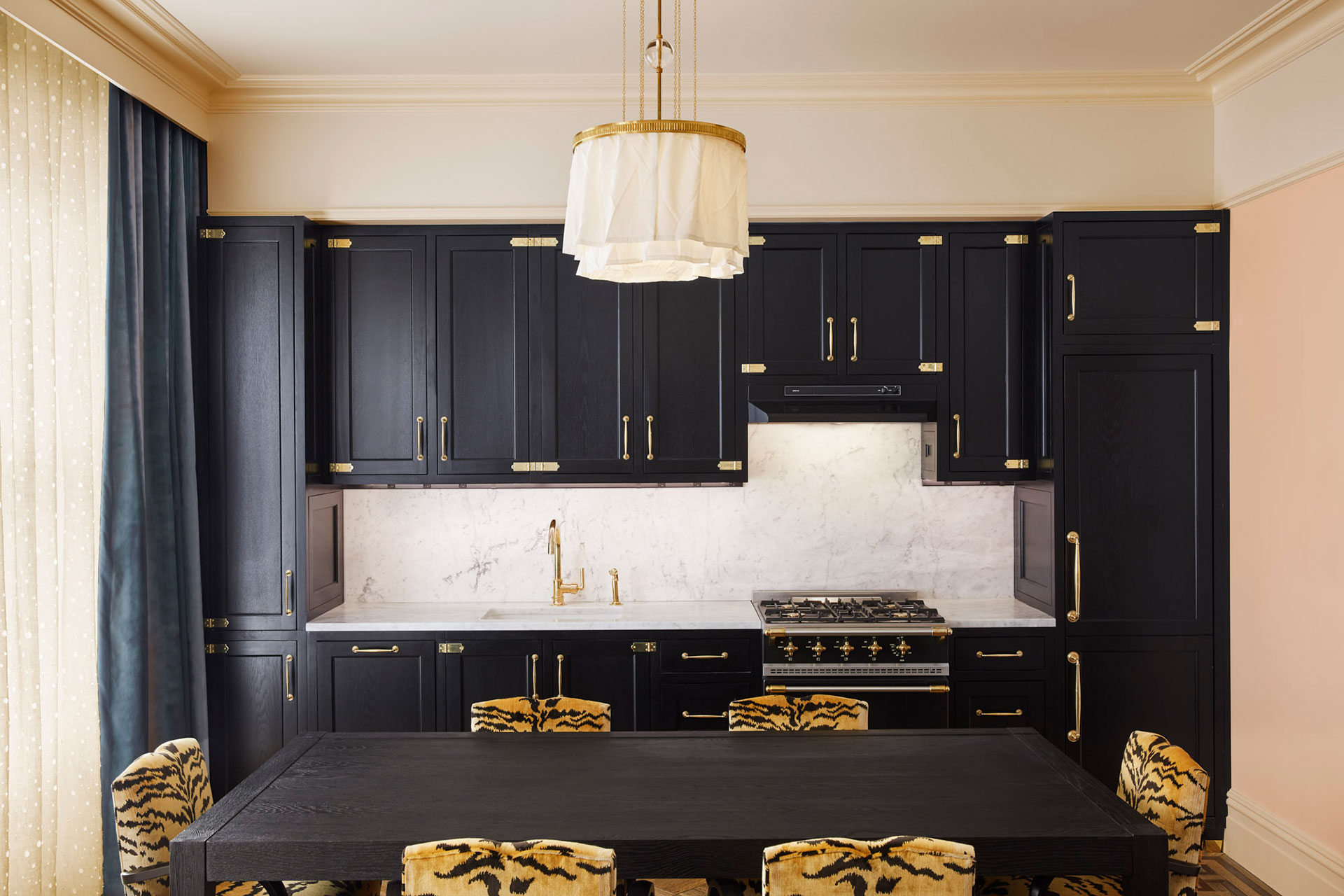 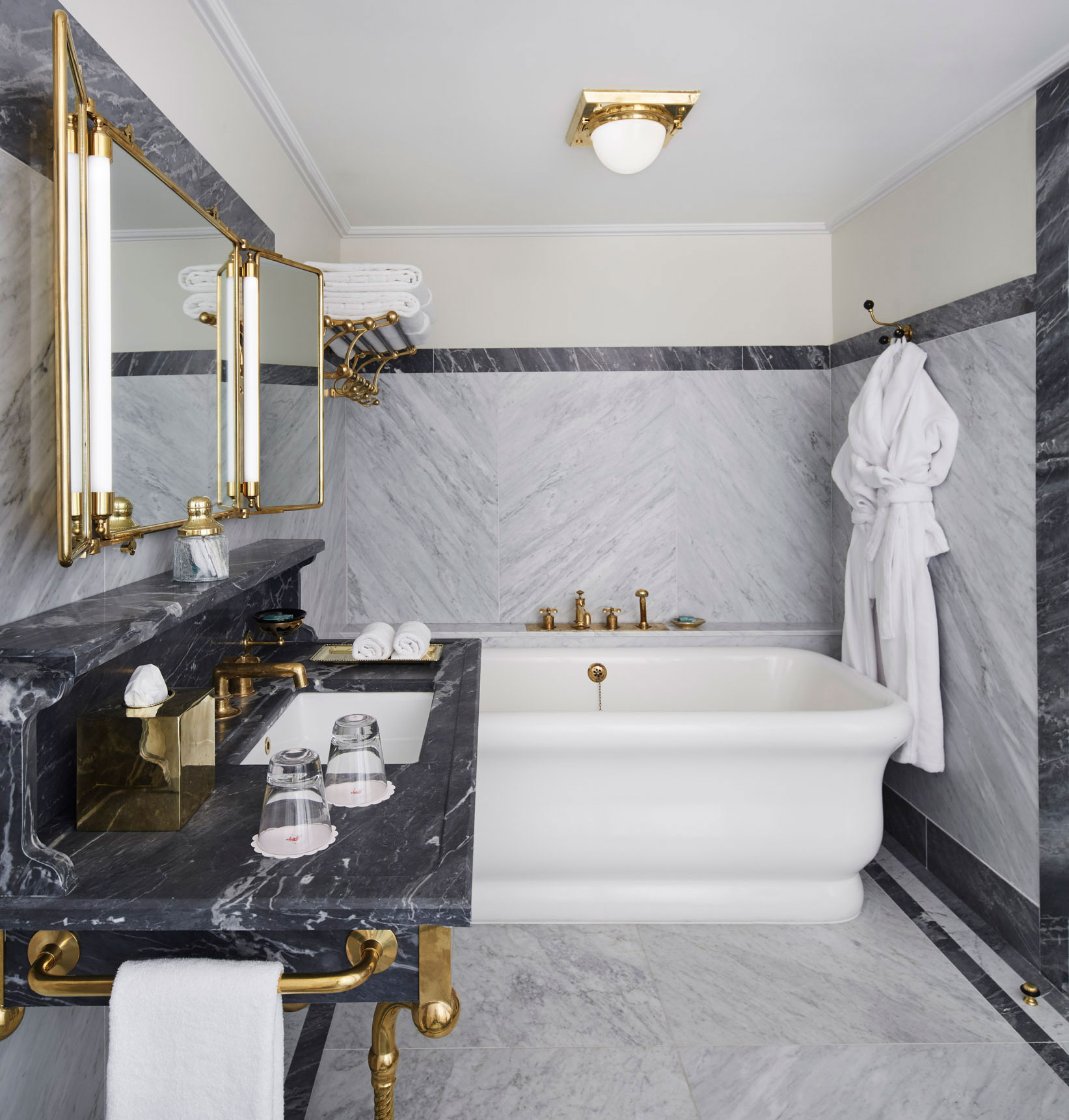 Something else far more important hasn’t changed. Certain long-term tenants remain at the Chelsea, living independent of the hotel, their rent-stabilized apartments departing from the new interior-design scheme, each one instead displaying the evidence of decades of continuous occupancy. It’s only fair — this building, once among the tallest in New York, was in fact one of the city’s very first residential co-ops, back when cooperative housing evoked an egalitarian ideal rather than an authoritarian board.

In 1880s New York, the architect Philip Hubert fought to translate the utopian philosopher Charles Fourier’s blueprint for an ideal society into a single apartment building. Equity — in the form of apartments — was given to the builders and designers who oversaw construction. Their pride in their future home led to a building filled with fireplaces in baroque white marble, Moorish mosaic tile, high ceilings, and light-filled staircases. A gorgeous residence worthy of paradise. The rest of the units were to be filled with a cross-section of society, with care taken to include tenants from all economic strata.

Like the rest of the 19th-century utopian experiments, the Chelsea Association died before it achieved nirvana, and was converted to a hotel during an economic bust. But its strangely shaped apartments — built in different sizes for different rents — became part of its lore; cut up, combined, and reorganized as the hotel morphed again and again.

The Hotel Chelsea is a work in progress. Right now you can book it at a fraction of what rates will eventually be, while a rooftop spa, a new restaurant, and more accommodations are still incoming. The restored Tea Room, longtime owner and manager Stanley Bard’s former office space, is not yet the new check-in area it will become. For now, it’s a makeshift storage room for the hotel’s found art — a frankly glorious site of discarded visual work under an original ceiling mural. It’s an image that epitomizes the majesty of even the hotel’s rawest components. 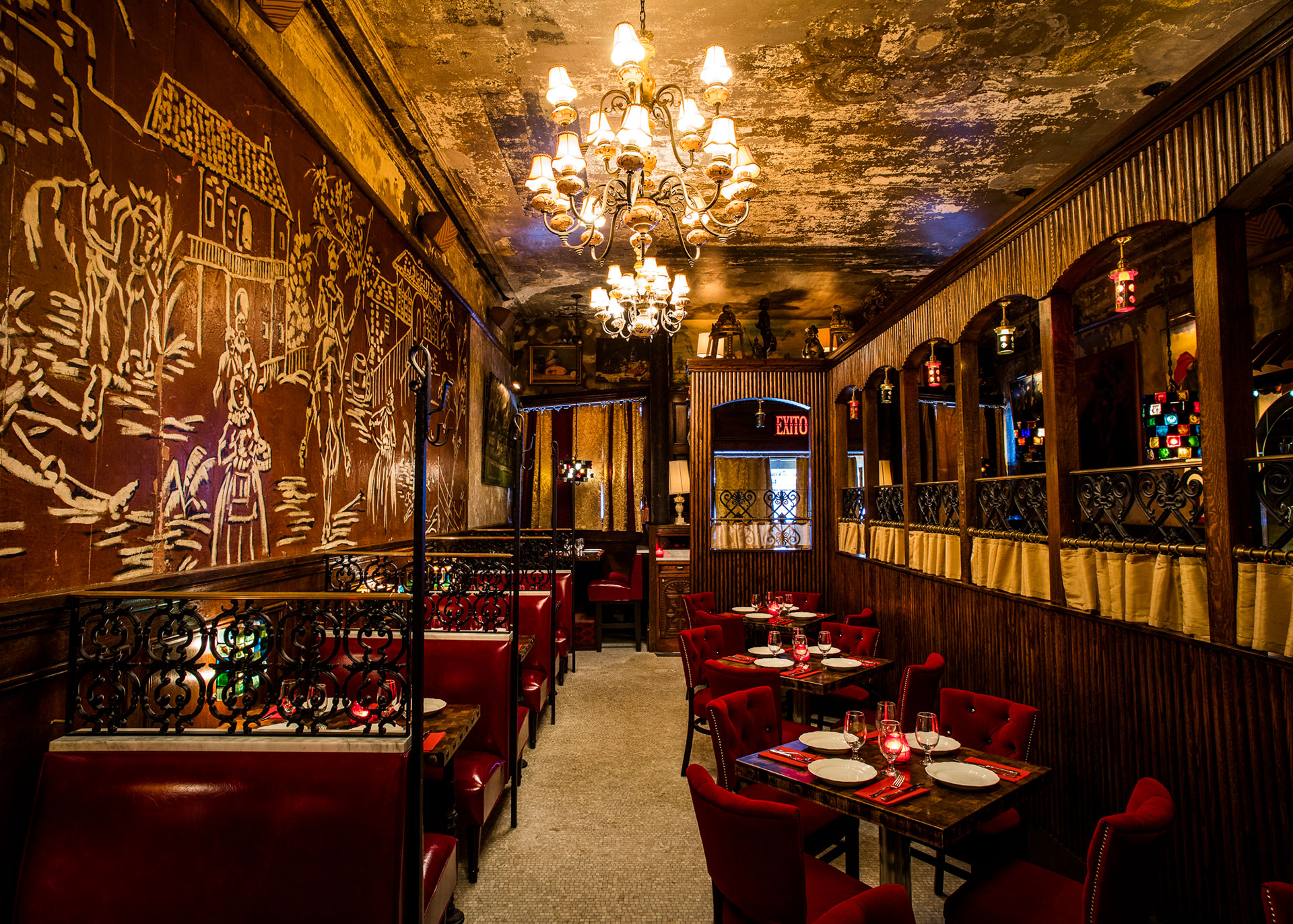 From what is finished, however, it’s clear that the new owners have consciously sought to recapture some of the utopian grandeur that marked the original building. Today, its 155 rooms distill the diversity of the original plan down to a relatively concise fourteen room types, from the single-occupancy studio queen to the two-bedroom pied-à-terre, the latter complete with full-size kitchen, washer, and dryer. The lobby bar will feature original tile floors and ceilings to go with restored wood-paneled walls and newly installed solariums. El Quijote — the famous bar synonymous with the Chelsea — has been restored as well, a stunning space dripping with character. On the wall, a photograph of Burroughs and Warhol dining together there.

The fireplaces and stained-glass windows have been restored in the best rooms. But it’s the reworked iron balconies, wrapping around the iconic red brick facade, that provide a poetic way to understand the new old hotel. The original balconies were known for their missing dividers — guests’ pets could wander from room to room. Today’s hotel prides itself on those wonderful outdoor spaces, while hoping to put up some semblance of boundaries between them. It’s a tidy metaphor for the start of a new morning at 222 W. 23rd. 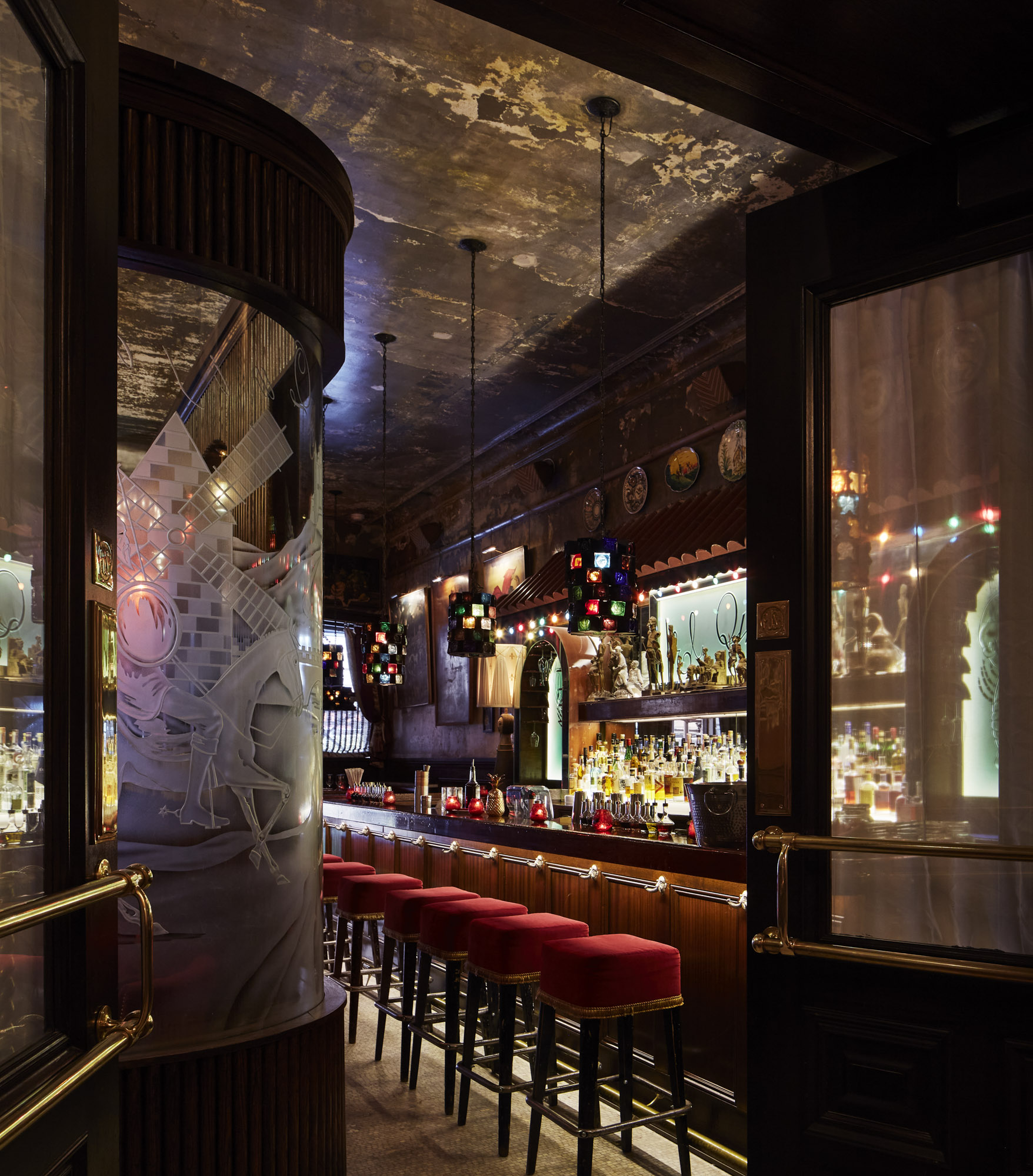