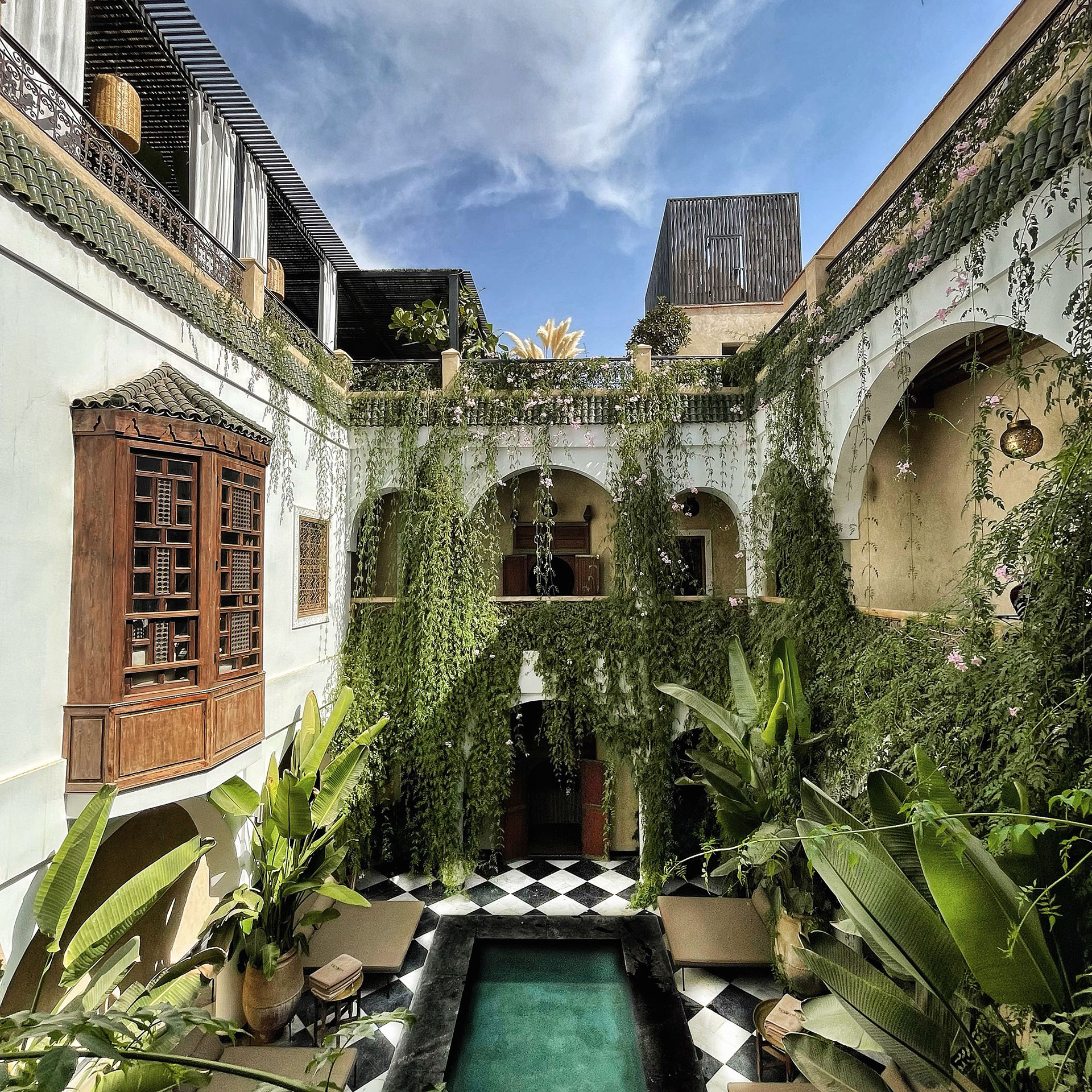 The riad is nothing if not traditional. And if it’s tradition you’re after in Marrakech, you’ll find no shortage of options. Riad Sakkan, on the other hand, takes you down a different path.

Before it was among the most storied hotel formats, a riad was simply a Moroccan home. Synonymous with Marrakech but found throughout the country, a traditional riad has several simple markers. High, windowless walls hem in an inner courtyard, usually dotted with pleasant greenery. A fountain or small pool guards against the heat, and balconies face inward from each story above.

There are dozens of Moroccan riads turned luxury boutiques on Tablet. It’s the hotel you expect in a Moroccan city, the same way you expect a ryokan in the Japanese countryside. But the Japanese inn has a traditional vision for each facet of the guest experience. A kaiseki multi-course dinner, an on-site onsen hot bath, tatami mats and futon bedding. A riad has no such tethers to ancient hospitality. “Riad” derives simply from the Arabic word for garden, after all, and it’s traditionally a home, even a palace, but not a hotel.

Which is to say — a lack of guest expectations can be freeing. Boutique hoteliers have enacted wild cultural fusions at old riads throughout the city, knowing all the while that the architectural foundations will always provide a sense of tradition. Walk into Riad Sakkan for the perfect example. 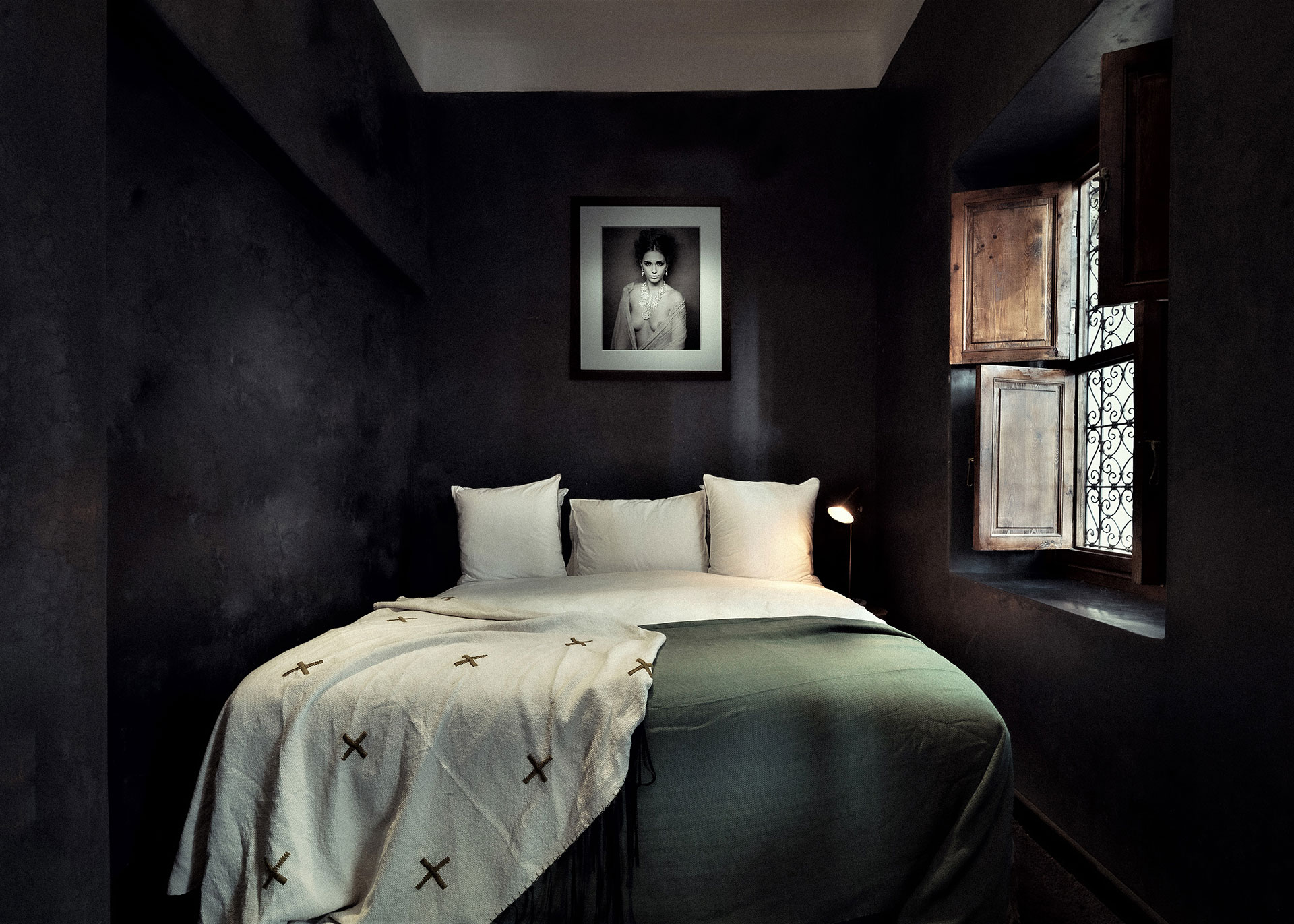 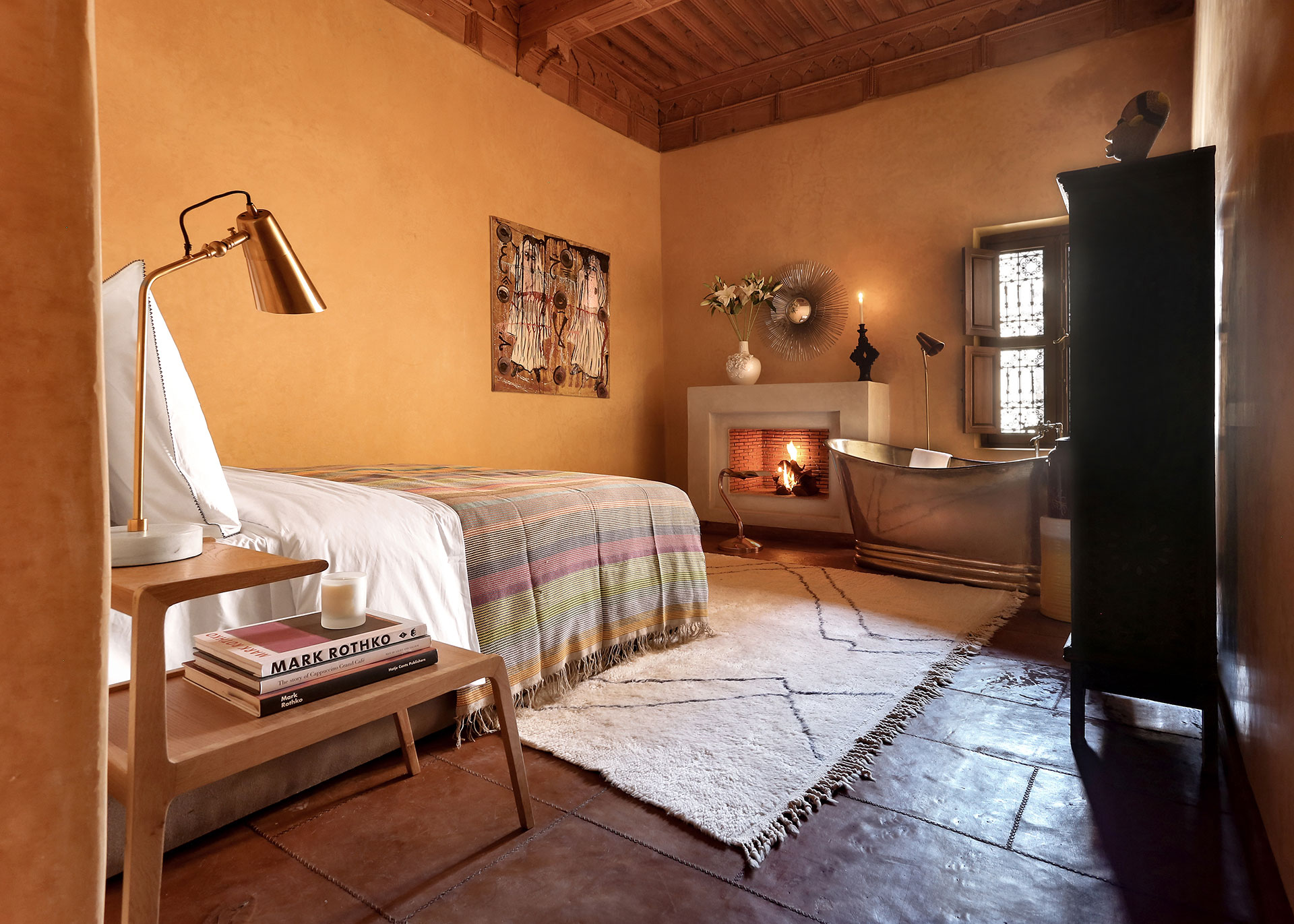 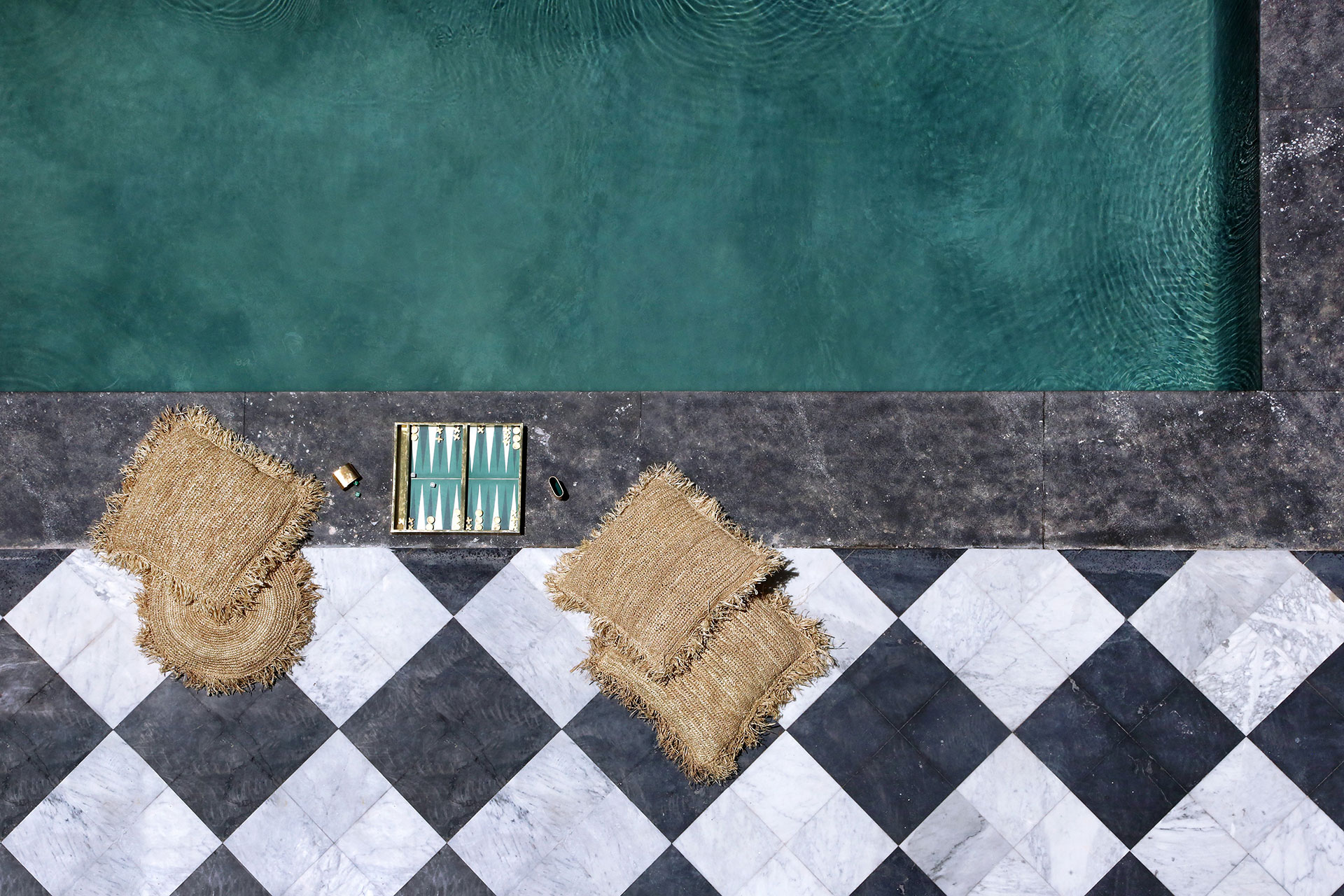 The place is technically two separate riads, connected by the galleries (balconies) overlooking the courtyard. The oldest space, as far as the hotel has been able to deduce, dates back to the beginning of the 17th century, and was built by a high-ranking officer of the palace guard. The second riad is likely from the 19th century. You enter the way people have entered any riad for hundreds of years, by passing through a door in the medina. Some are simple and unassuming. Riad Sakkan’s is hefty and intricately decorated. Once inside, the soothing smell of perfume and the sounds of soft music refill your senses. And before you’re told that the soundtrack is available on Spotify, black-and-white pieces by famed nude photographer Marc Lagrange provide your first tip that this is hotel is far from the past.

Belgian owners Veerle De Pauw and Tom Van Even operate several restaurants and bars back in Europe, but they appreciated that Riad Sakkan felt more like a “big home” than a typical hotel. Set in the trendy district of Mouassine, (named by Time Out in 2021 as one of the world’s 50 favorite neighborhoods), the decor is untraditional, but every effort was made to restore the building’s original grandeur. “Our riad is indeed architecturally traditional,” insists Van Even, with certain caveats. An original stairwell was restored, and technical needs were stored in tunnels to keep modernity out of site. Original galleries were put back in place, overlooking the courtyard and pool, the latter one of its least typical aspects. It is the rare riad with a pool large enough for swimming, and although traditional riads did often feature a rooftop terrace, Riad Sakkan’s bustling rooftop restaurant — complete with the owners’ favorite place to relax, the luxurious armchairs by the fire — is an anachronism.

Many Europeans have made restoring a riad their life’s work. One of the pioneers was Quentin Wilbaux, an architect responsible for the restoration of some 137 traditional houses. We bring him up not because has anything to do with Sakkan, but because he represents the opposite perspective, his modus operandi to celebrate the “simplicity of the riads” in their most traditional forms, with “white walls, carpets covering the floors, mosaics and very little furniture.” 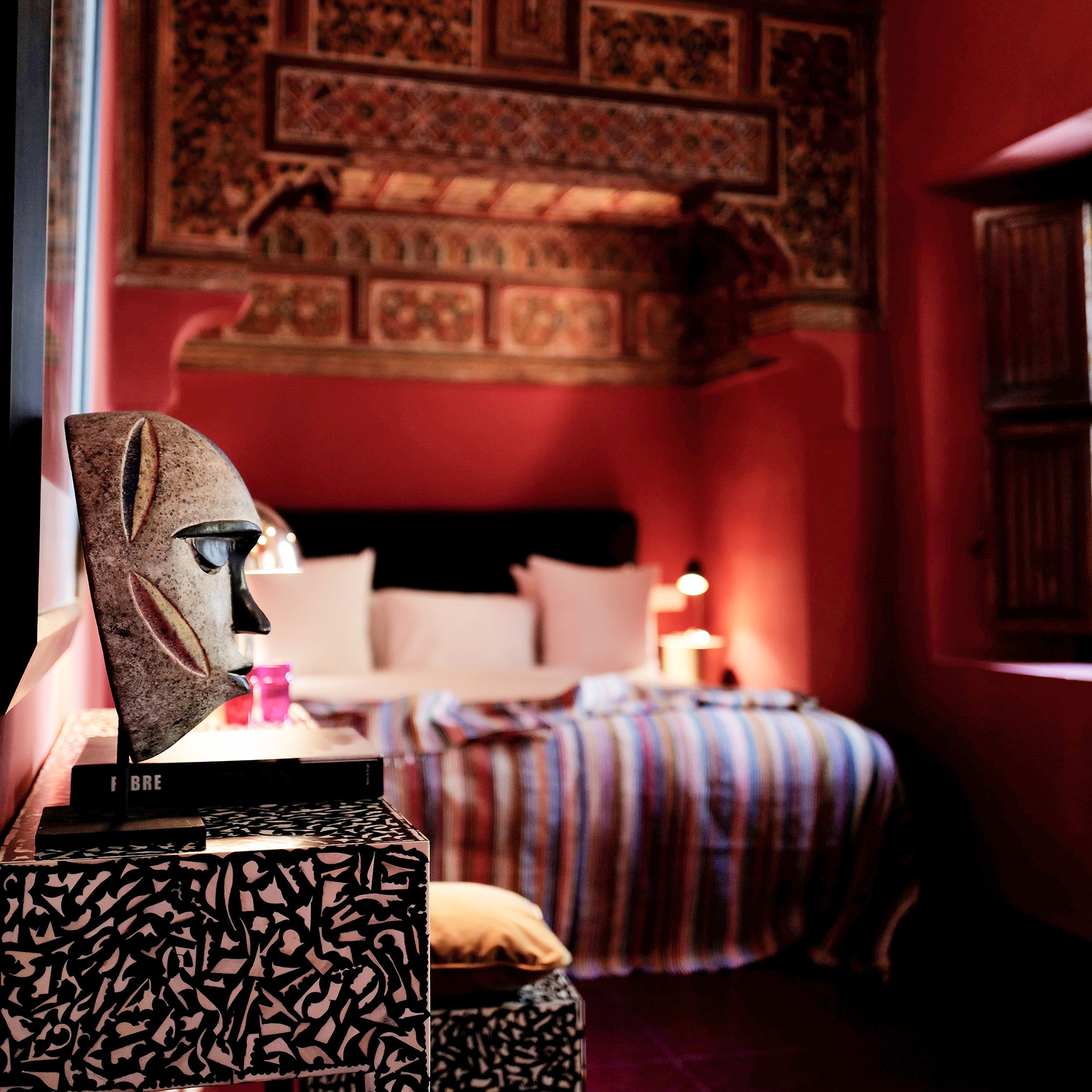 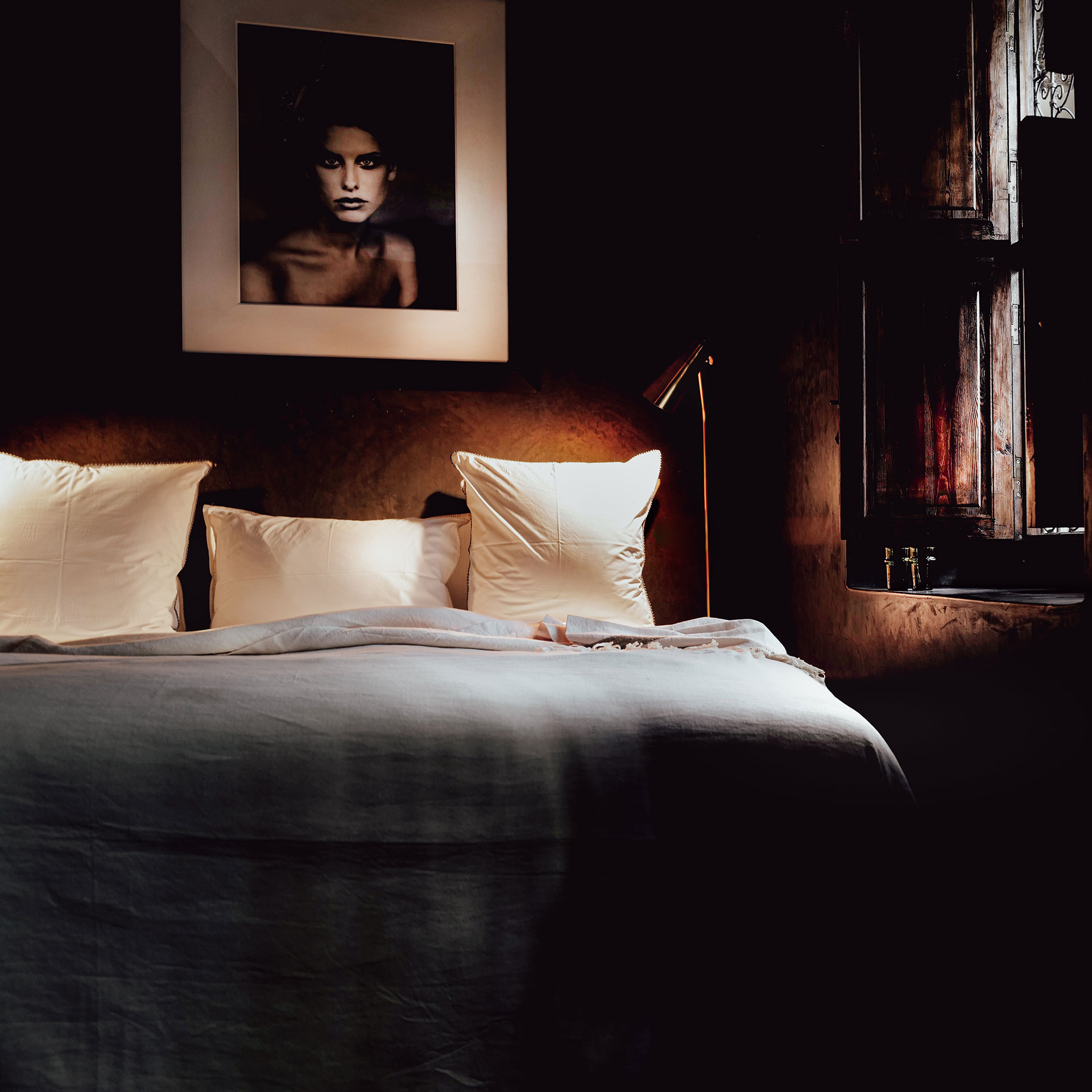 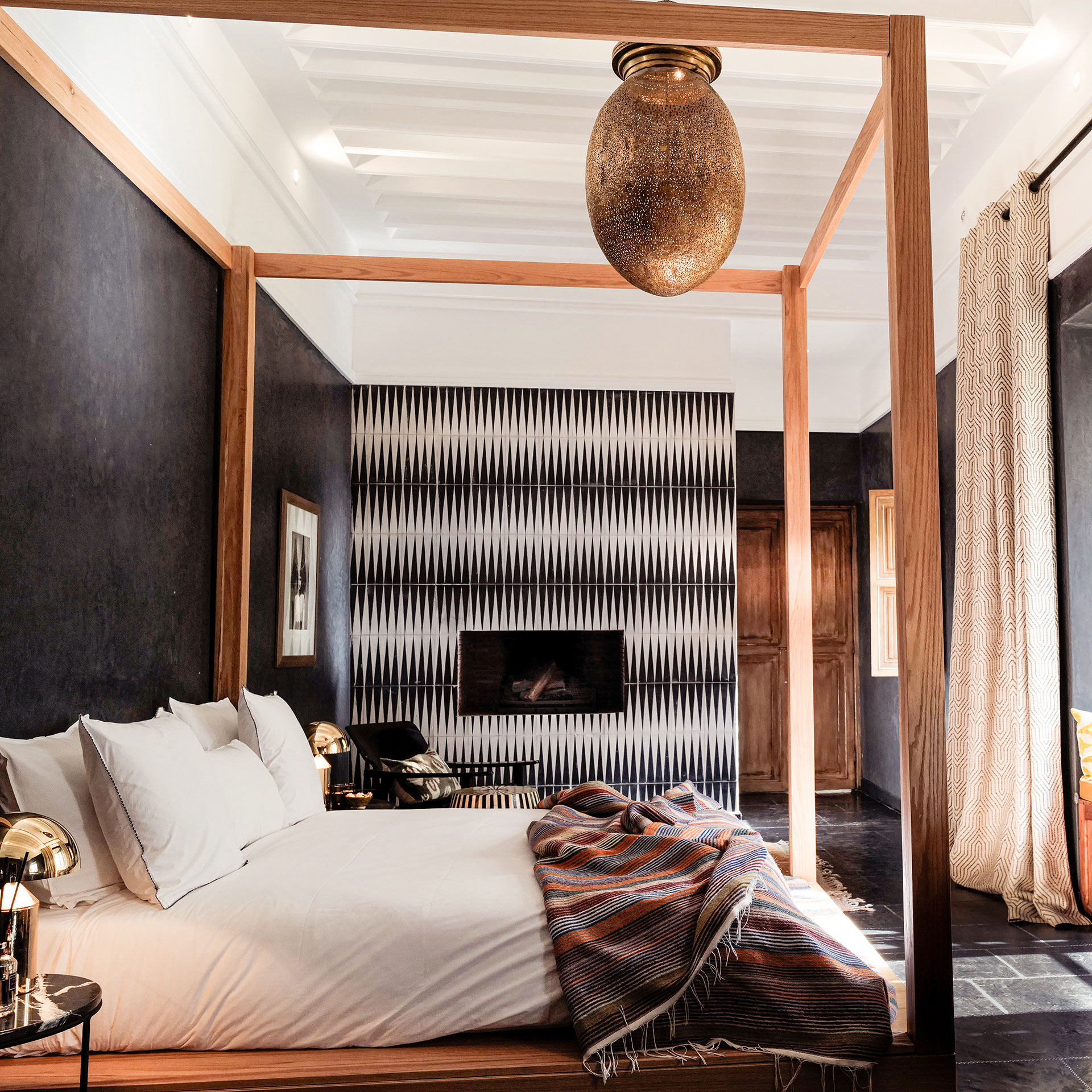 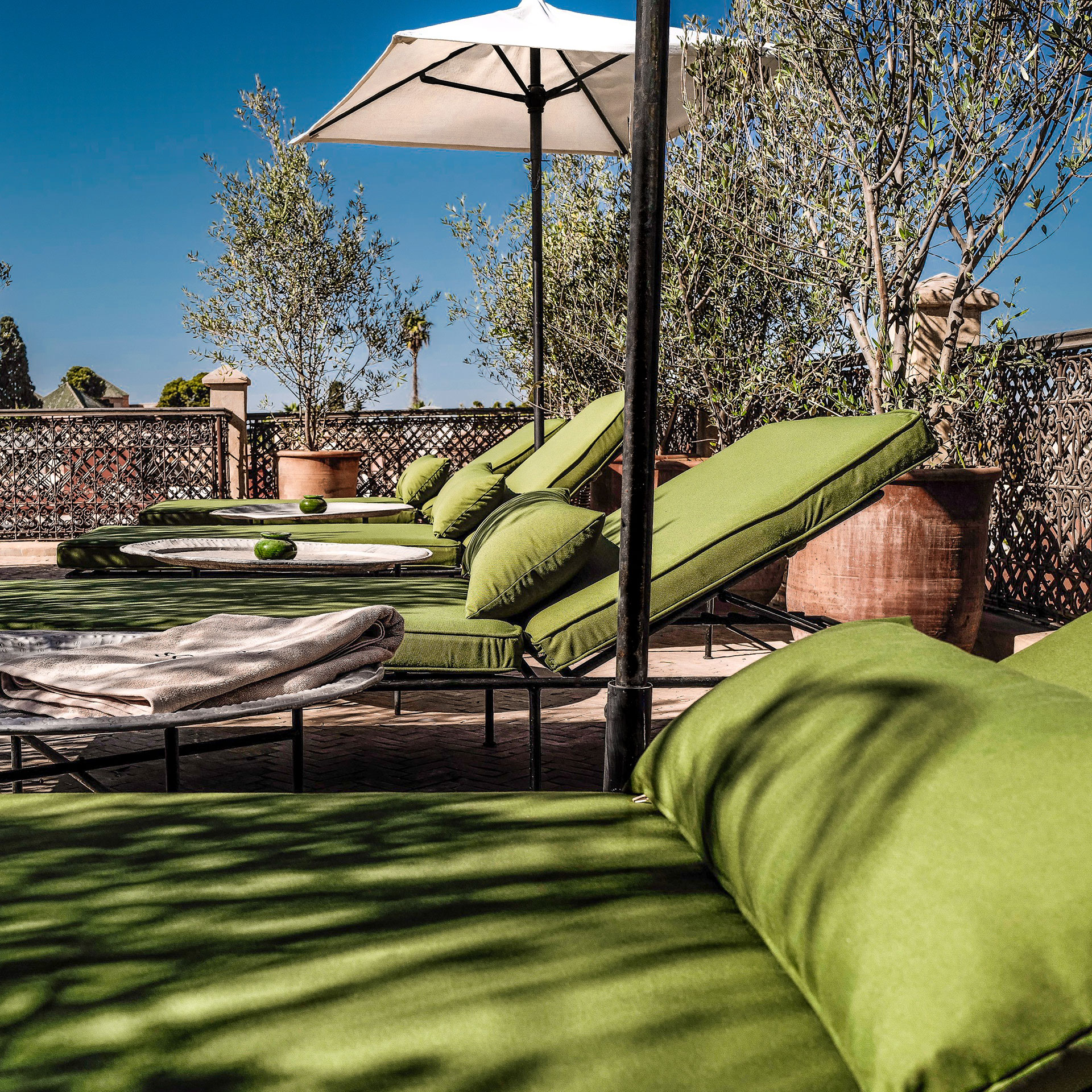 Riad Sakkan has gone a different direction. The twelve rooms are all different, all boldly imaginative. Some are adorned with blood-red tiles and African masks, others with calming neutrals and striped dressers. A favorite is the black junior suite, decorated in black tadelakt (a traditional material) in combination with a floor of camel leather. The owners fill the hotel with their own modern design pieces, switching them in and out with ecstatic energy. You’re introduced to their style almost immediately at reception and other public spaces, with an eyeful of glass mosaics by artist Isabelle Scheltjens and photographs by the aforementioned nude enthusiast Lagrange.

But as up-to-date as it sounds, the heart of Riad Sakkan is still its architectural tradition. It is inherent, no matter the changes, in its very form. The “inward facing scheme,” explains travel writer Elan Fleisher, is “designed to maximize privacy from the outside world” in an Islamic culture where “such privacy is highly prized.” Similarly, experts have noted that “the symbolism of paradise is present throughout” a riad, the greenery and water within the courtyard evoking the sacred.

But for the secular, the riad is merely a welcome buffer and a cool place away from the hot and hectic world outside. Today, it’s okay if most guests miss the symbolism — they’ll always appreciate the beauty. 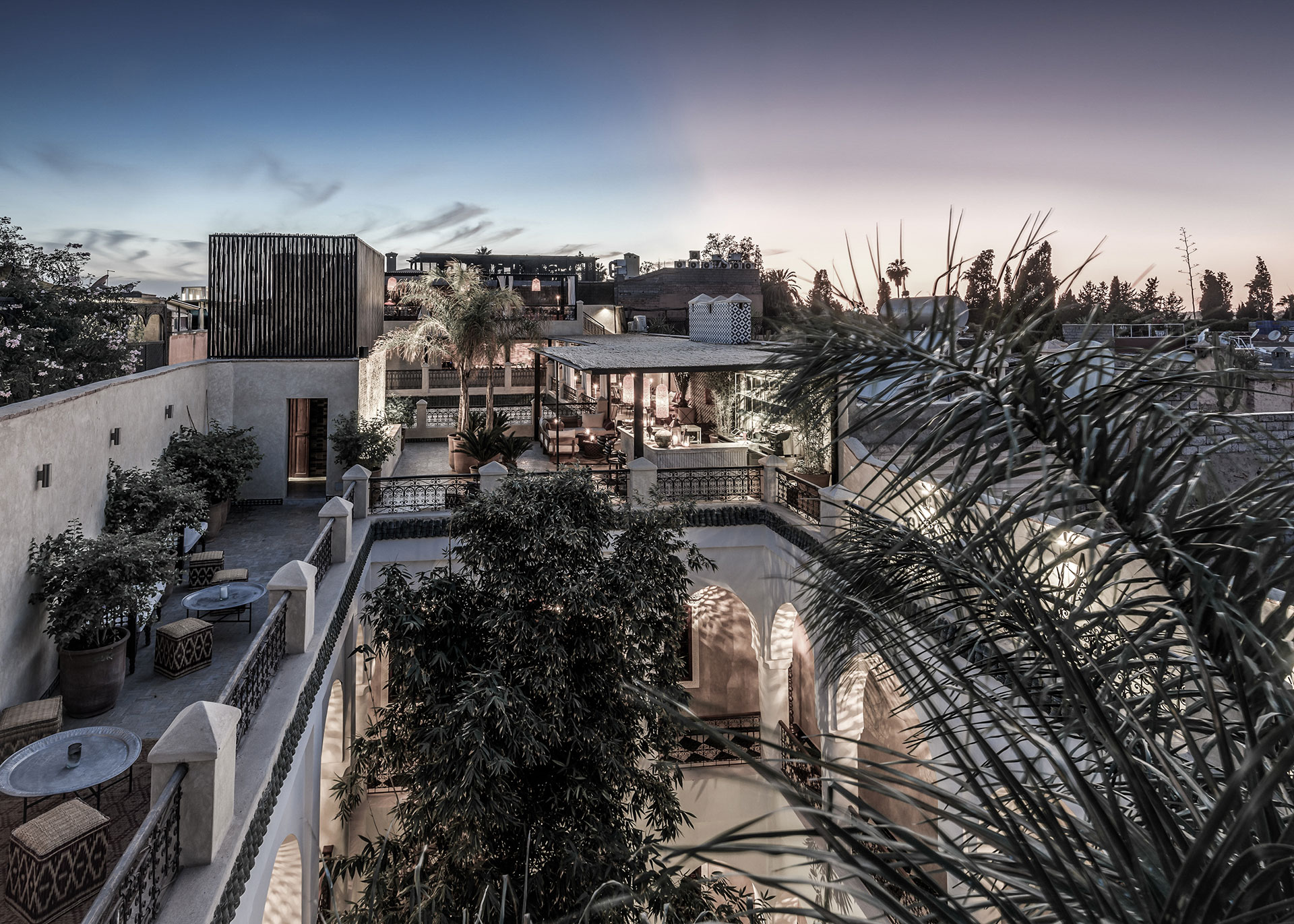