Not Italy, not Spain, not Germany, and not France — not even Sweden or Japan, nor the US or UK. None of these countries has a collection of trailblazing boutique hotels that can beat what’s popped up in Portugal over the past decade. Despite being quite a bit smaller than those other places, both in area and in population, Portugal punches way above its weight when it comes to cutting-edge accommodations. Even more surprising, the most innovative and inventive hotels in Portugal aren’t located in the larger cities, where you might expect them. No, they’re spread throughout the countryside in forests and valleys, on beaches and islands — places where they have room to experiment and where creativity isn’t limited by the cozy confines of urban space.

We’ve written before about Portugal’s legendary run of rural hotels, listing these extraordinary examples. Today we’re taking a closer look at five of the more interesting boutique hotels from that selection.

When we describe these hotels as boutique, we mean it in the original sense of the word. These aren’t the chains or the sub-brands of the established players, looking to fill out a portfolio. These are one-off hotels that could exist nowhere but on their very specific plot of land in their very specific place, built with the care and intensity of a hotelier in love with the country. These are passion projects — and each one is a unique exercise in advancing the field of hotel design.

And just in time, too. Thanks to its cost competitiveness, stable political situation, and bounty of natural wonders (among other reasons), Portugal has quickly grown into one of the world’s most desirable tourist destinations. And thanks to the passionate hoteliers you’ll meet below, it also now has unique hotels in every corner of the country, ready to host all those new guests. 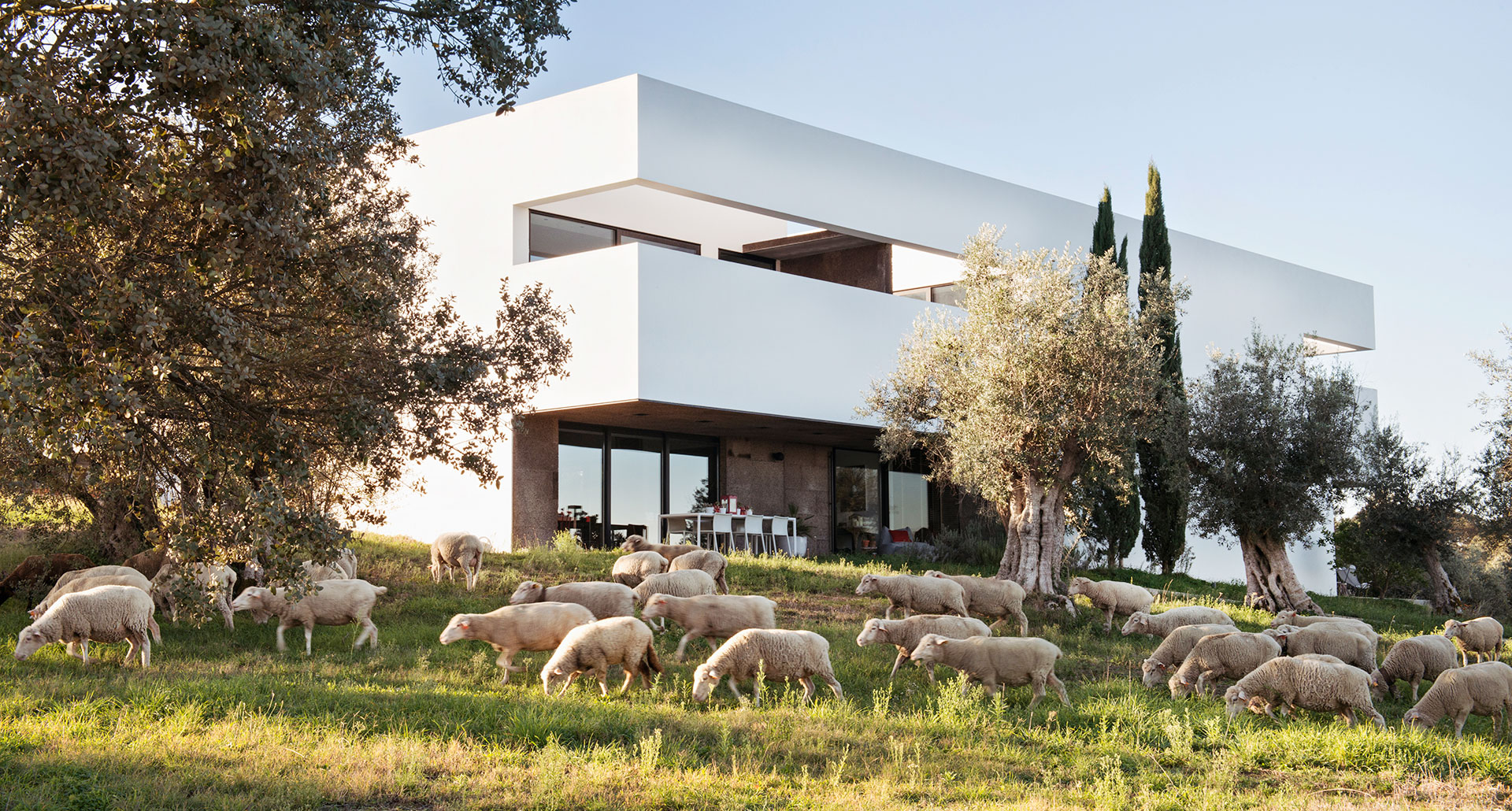 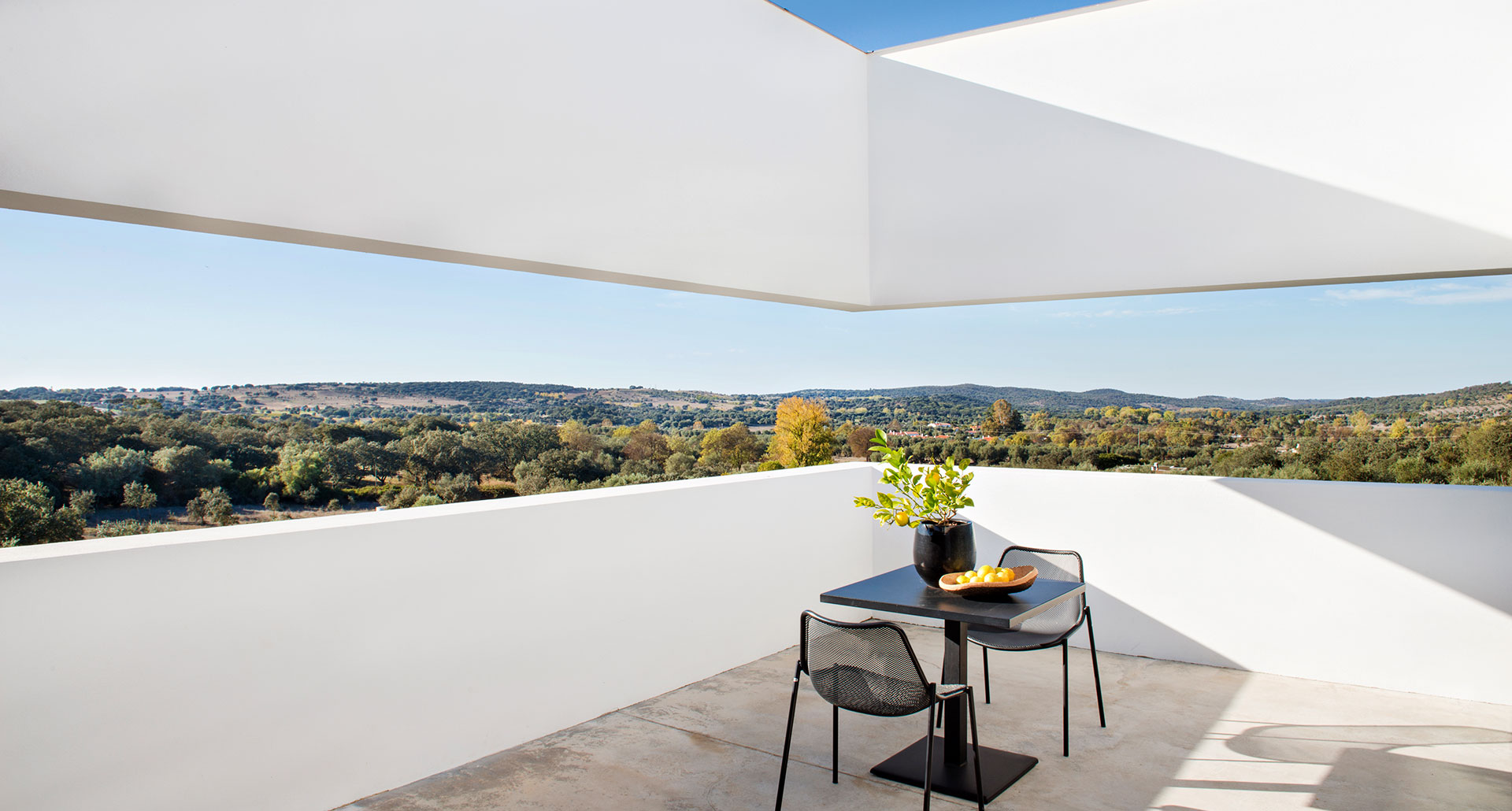 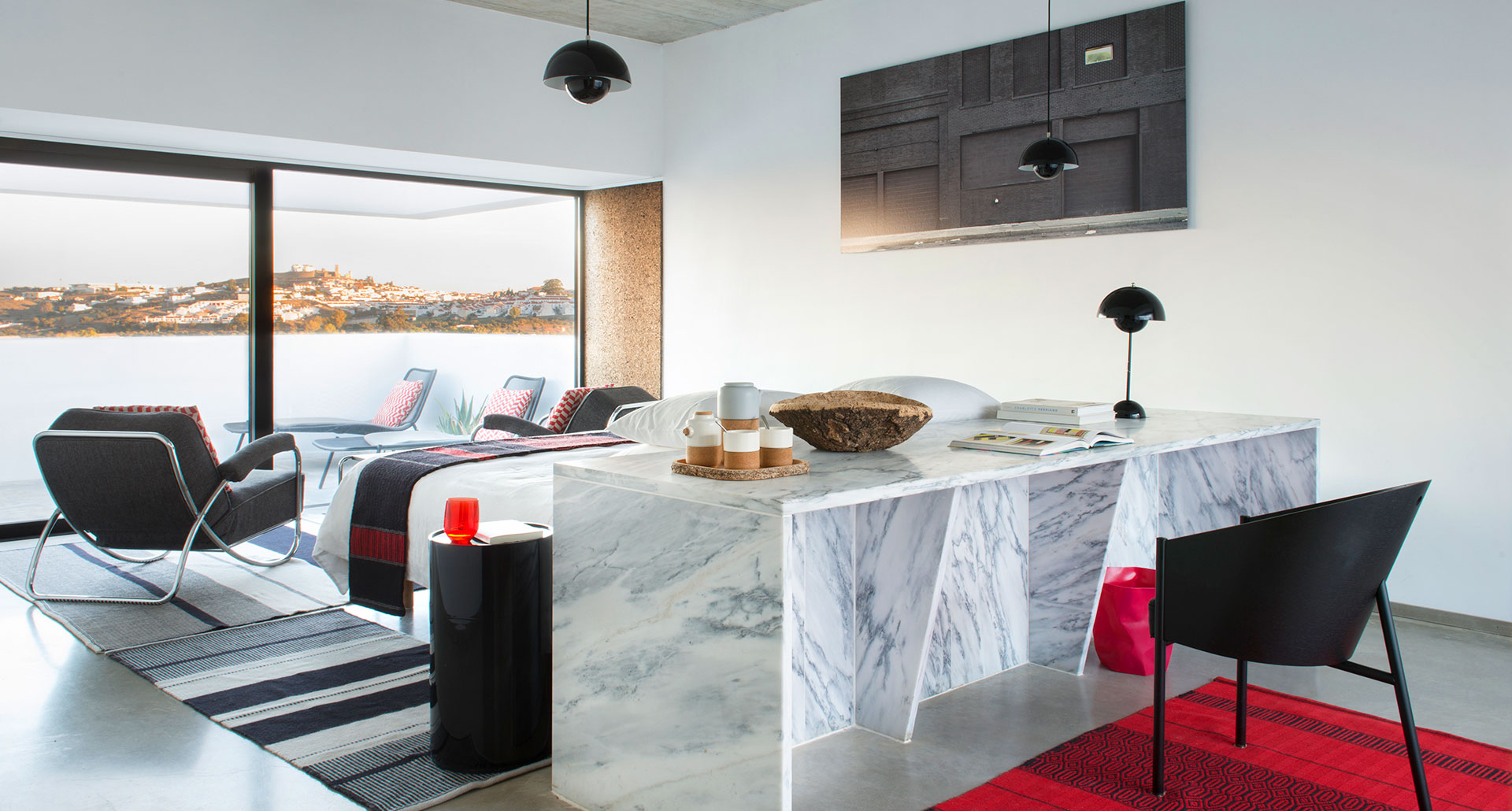 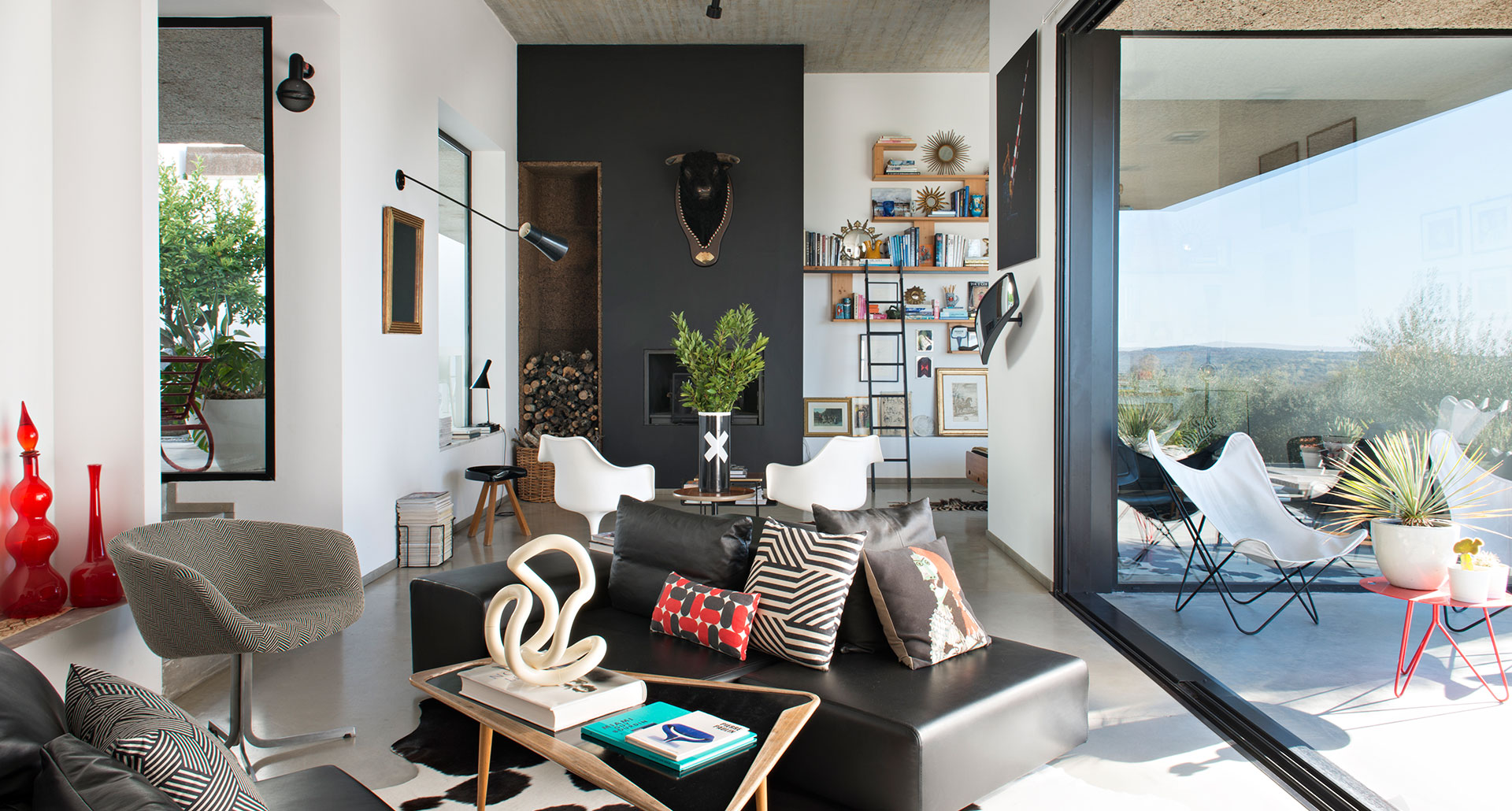 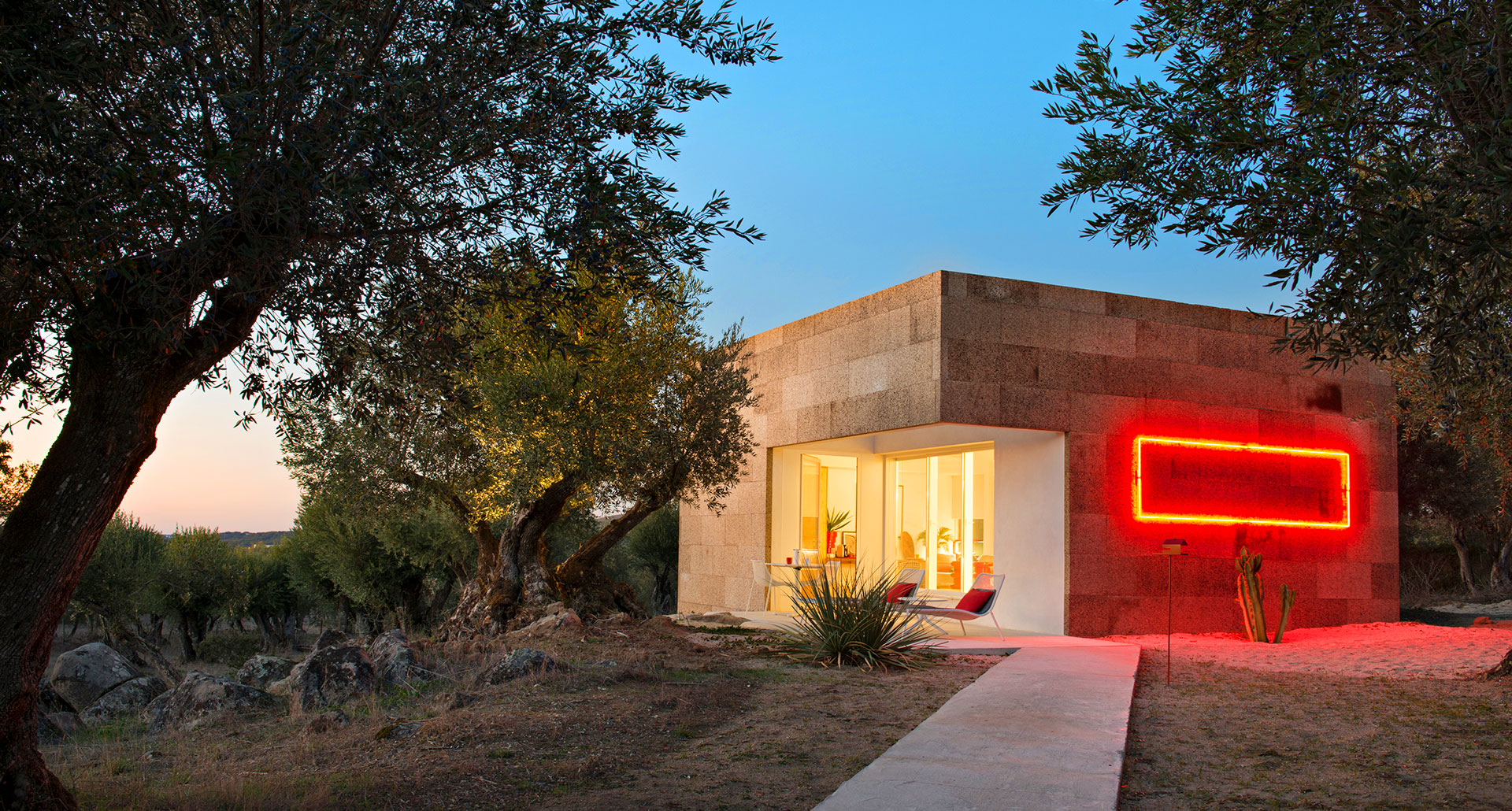 Case in point — Villa Extramuros, a modernist marvel located in Arraiolos, not far from the historic city of Evora, surrounded by the cork forests of Alentejo. When François Savatier, the French hotelier behind this tiny masterpiece, began work on the hotel in 2012, “it was one of the first contemporary small hotels in the countryside,” he explains.

Savatier had a marketing background, but a lifelong love for architecture. Villa Extramuros, a striking edifice in a gorgeous slice of remote natural landscape, is his dream come true. It’s been joined by others in its mold in subsequent years, but Villa Extramuros stands out still, a magnet for architecture buffs and designers, a showcase for local art and handicrafts within a contemporary villa inspired by the 20th-century masters (look up Le Corbusier’s Villa Savoye and you’ll see some of the inspiration). But Francois didn’t ask for anything too specific from the architect — what he wanted most was simply “something different and new,” a “modern house in the middle of olive trees,” forests, and wineries. He got it.

Arraiolos is a tiny town perhaps most famous for its picturesque medieval castle. The staff will recommend a visit, and they’ll point you towards other traditional, surrounding villages, the type of wineries you dream about when you think of the Portuguese countryside, and — if you’re staying for a while — to a beach about an hour away. But if you’re just stopping by, drawn by the fascinating contemporary edifice, the private terraces in each room, the several outlying, cork-built cabanas, and the bright, colorful interior design, you might want to spend the majority of your days sipping a local vintage by the pool or taking in a massage. 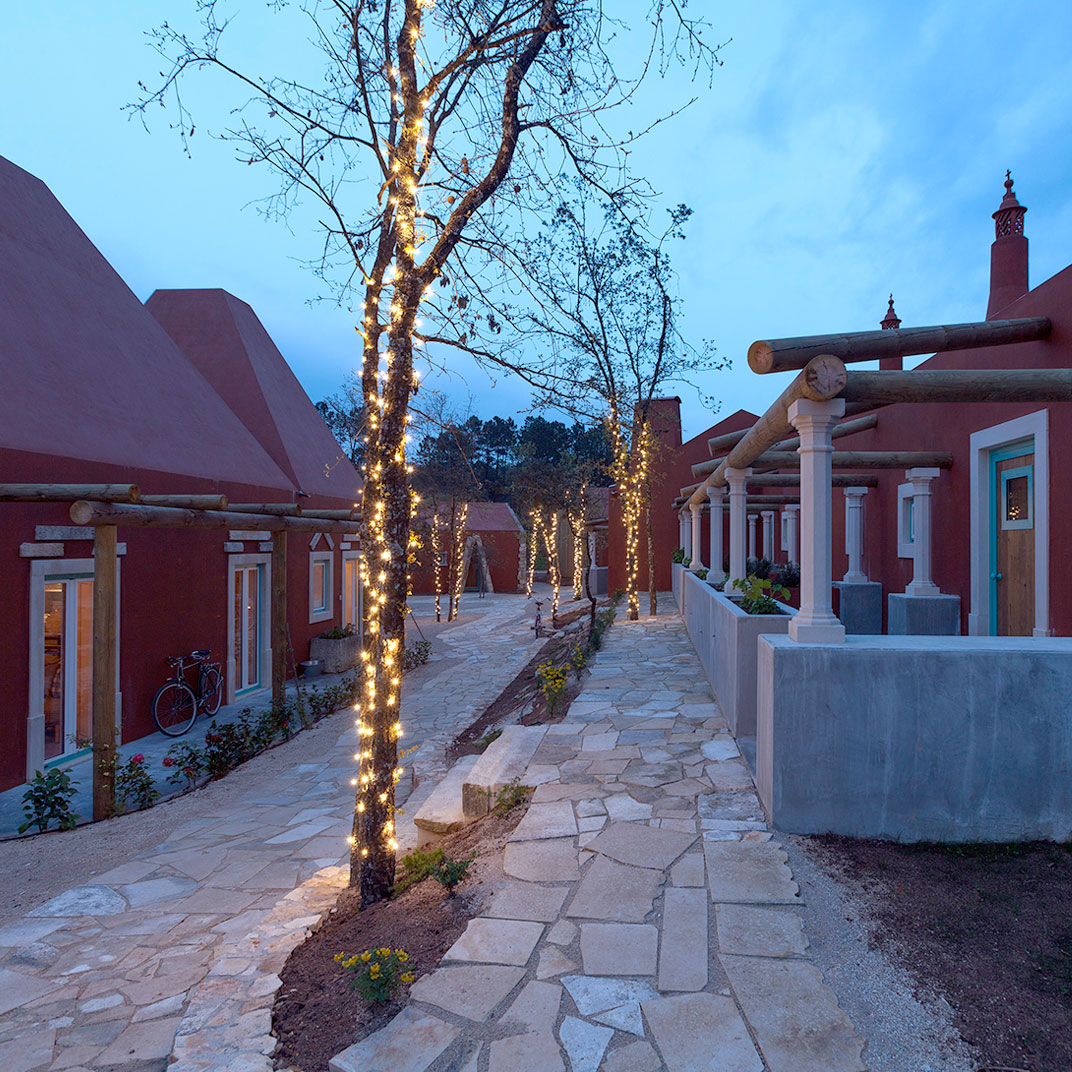 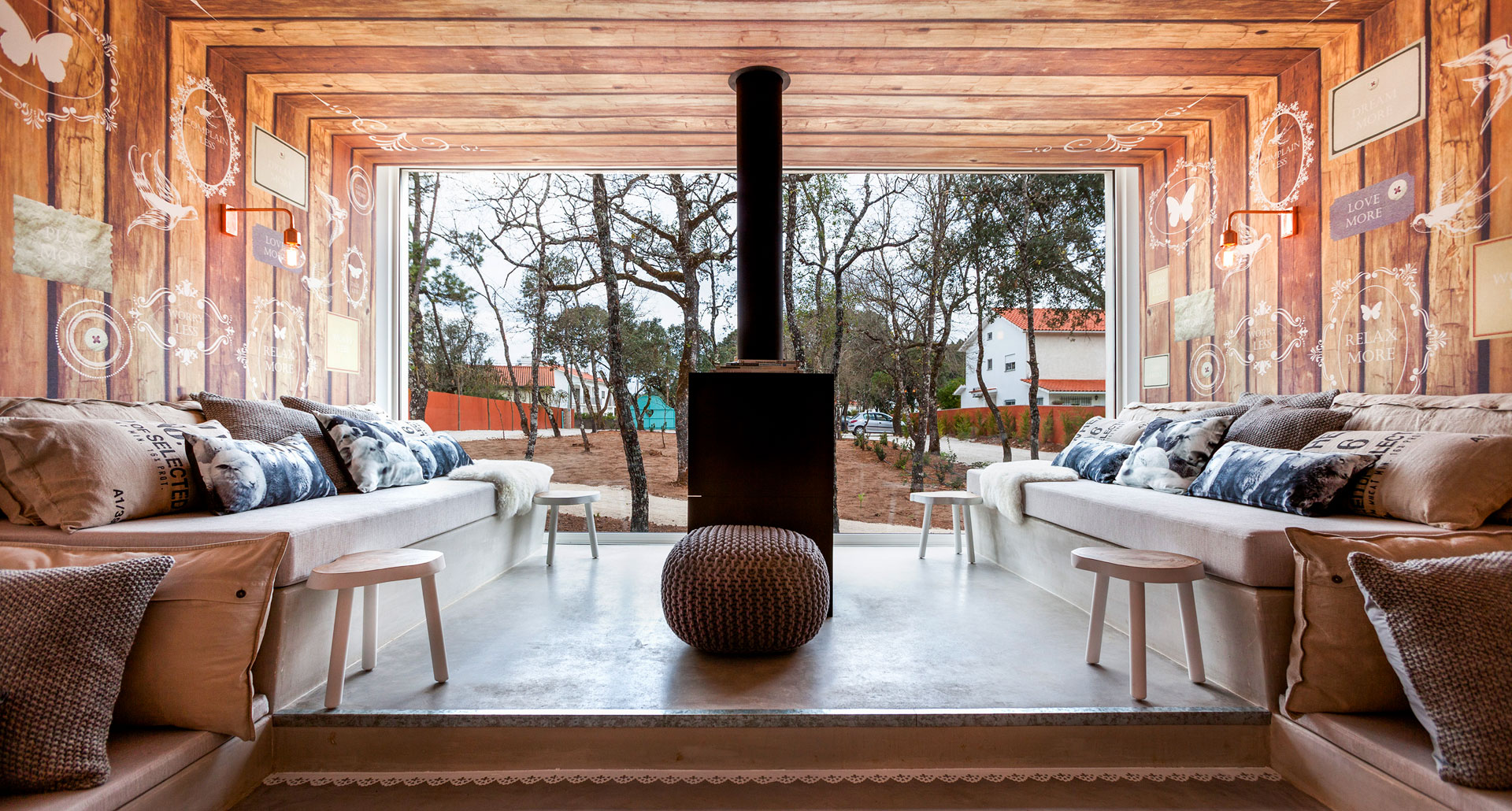 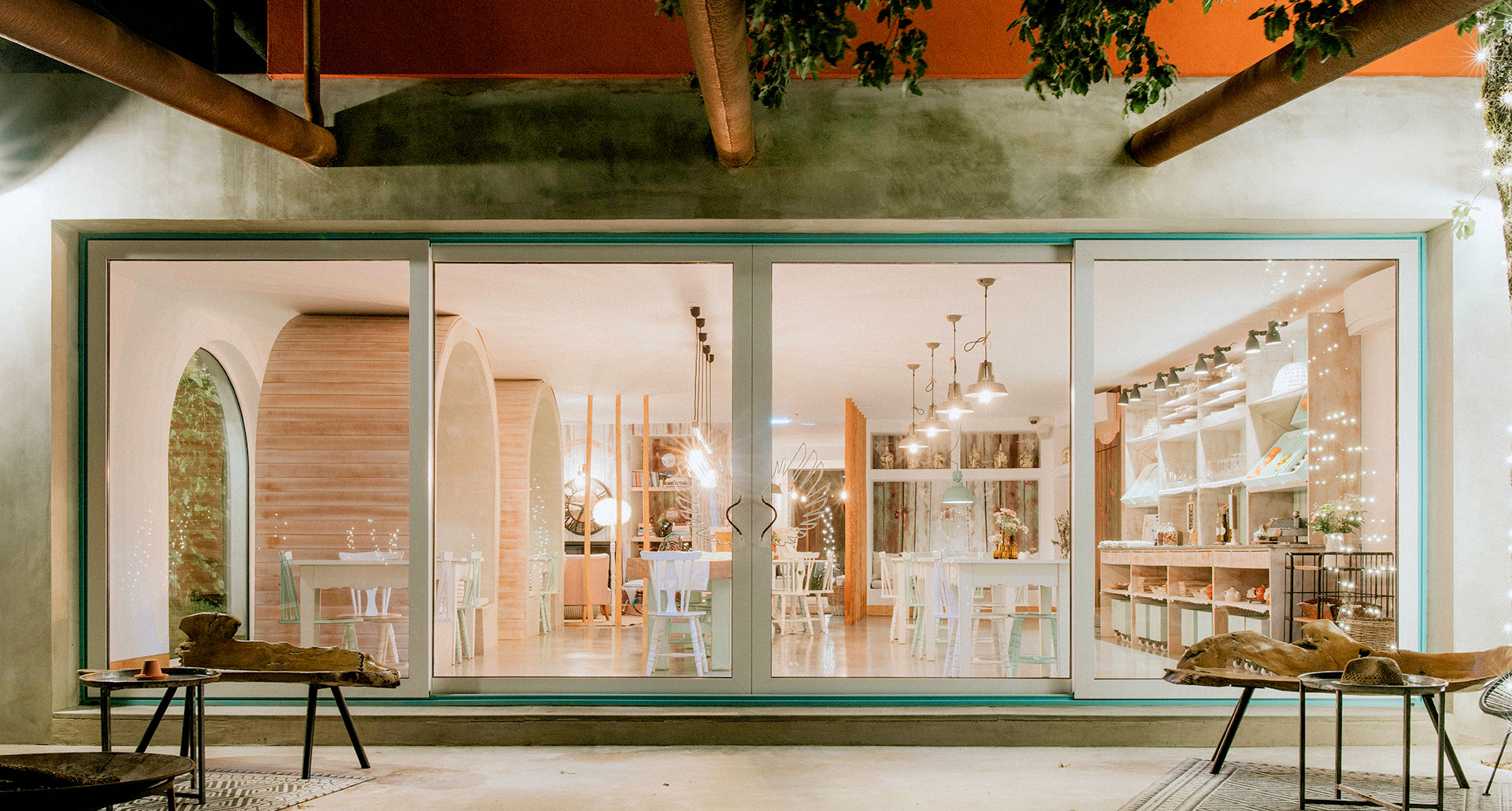 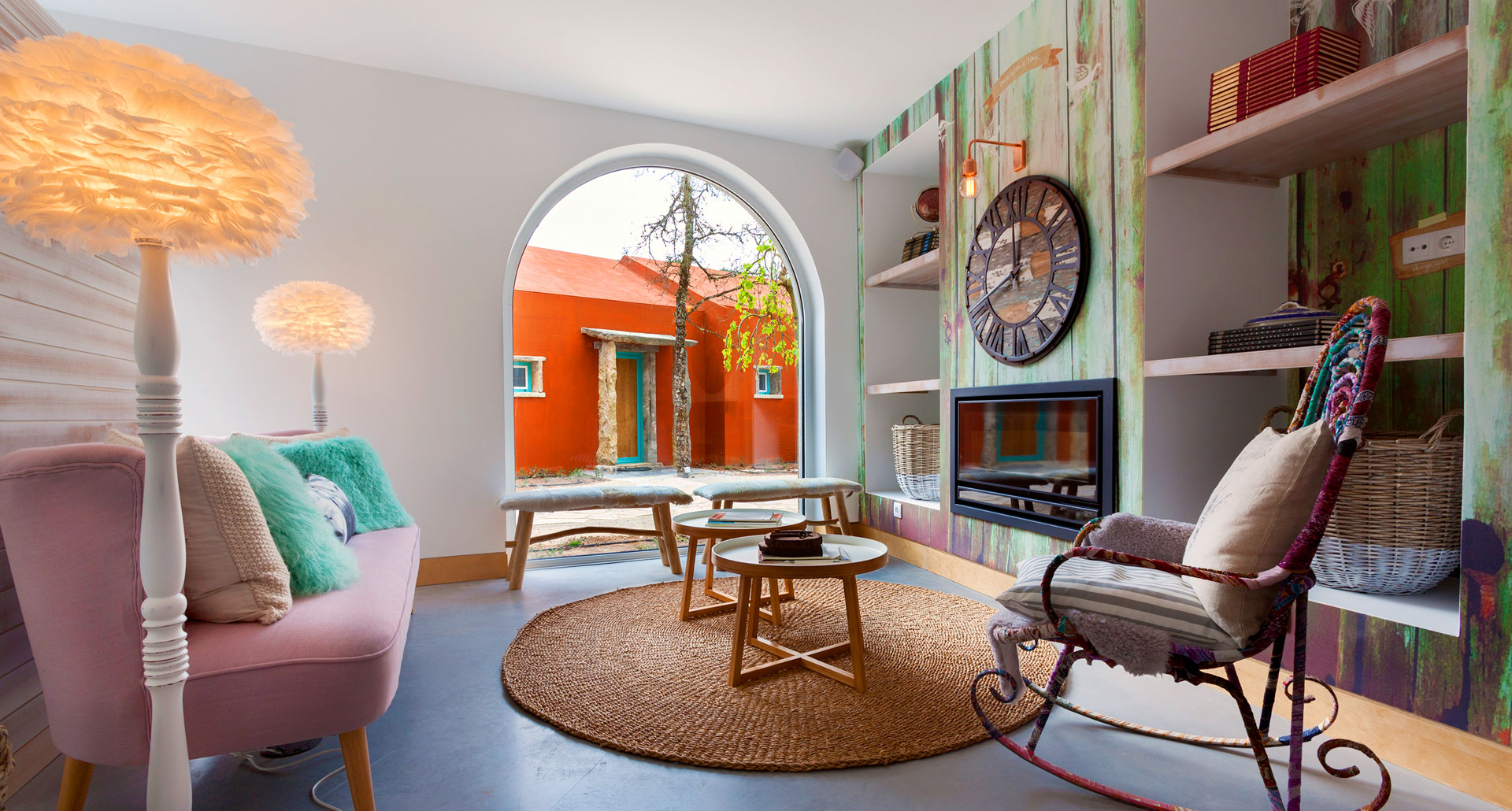 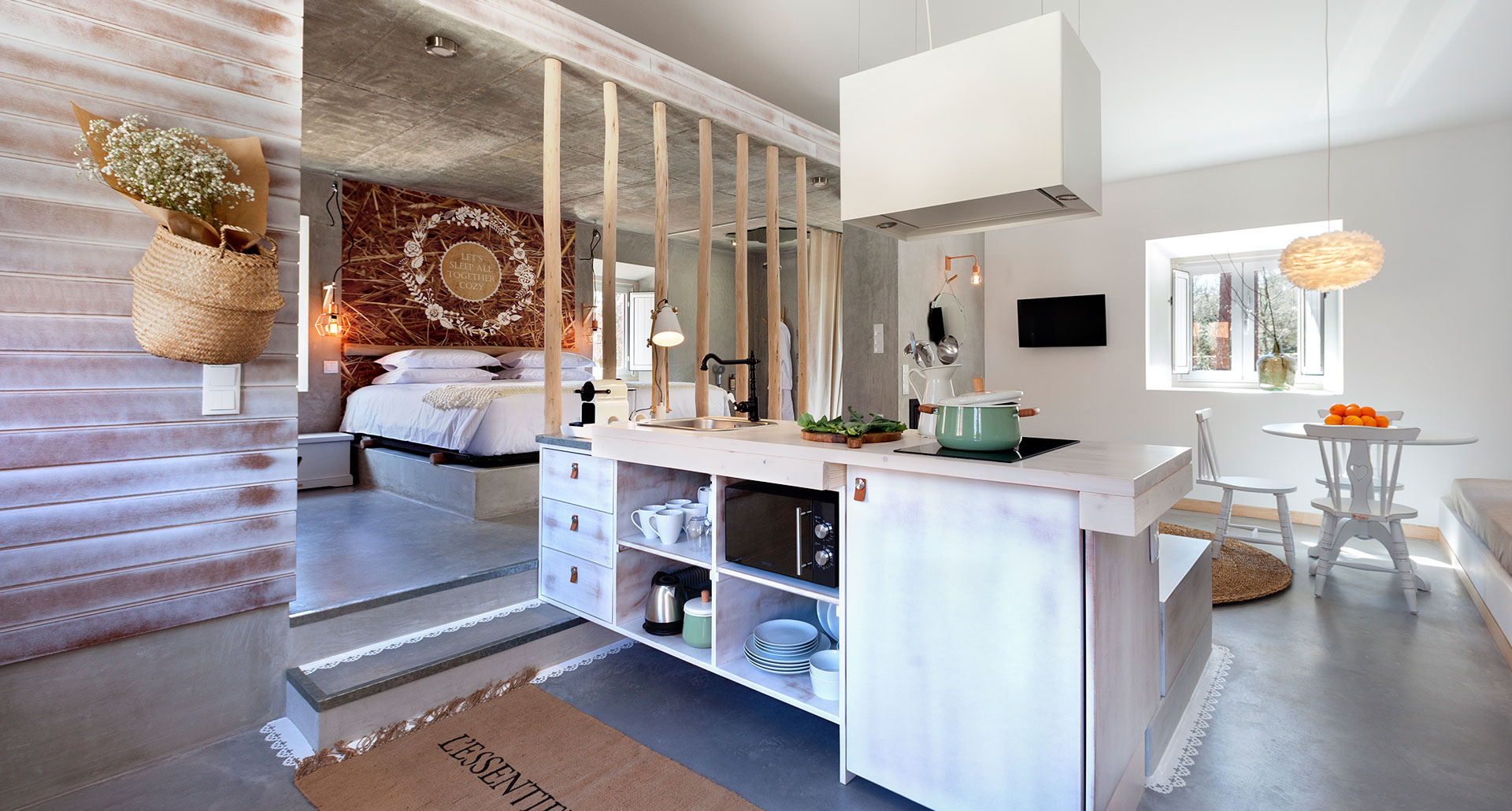 In the city of Fátima, it’s the rise of tourism itself that serves as inspiration for one of the most intriguing boutiques, Luz Charming Houses. Here, locals Ana Alves and Pedro Silva felt a nagging desire to preserve, amid all the development, the type of quaint towns they grew up in. Their solution was to create one of their own, creating from scratch — with the help of history books, old newspapers, and faded photographs — a small village.

An architectural reimagining of traditional forms, their mission was to preserve, within the bounds of the estate, the “simple and casual environment between neighbors that used to live with open doors.” Visit and you’ll find terra-cotta buildings within a wooded landscape of fruit and olive trees. Take the tour and you’ll stand within a town grocery store. “Every village had one,” the hotel tells Tablet, “so in ‘the village of Luz Houses,’ you can find one too.” Theirs is full of local crafts to benefit the region.

The original idea was to recreate and reinterpret the village of Aljustrel. Everything on the property was built from scratch with that in mind, with the “Motherhouse” hosting a dining room and public lounge space, as well as the grocery store full of crafts and artifacts sourced from the local community. Accommodations are anything but antique, with immaculate, nearly all-white decor, polished concrete floors, and open floor plans (suites add a kitchen and private porch). And while Fatima, the town that hosts this cozy little town, is known as a place of pilgrimage after three children witnessed a series of Marian apparitions in 1917, the hotel is consciously irreligious — even if they hope the feeling of relaxation rises to one of casual, spiritual revelation. To that end, you’ll find little messages (“why don’t you try sleeping on the other side of the bed?”) printed around the decor. Why not? 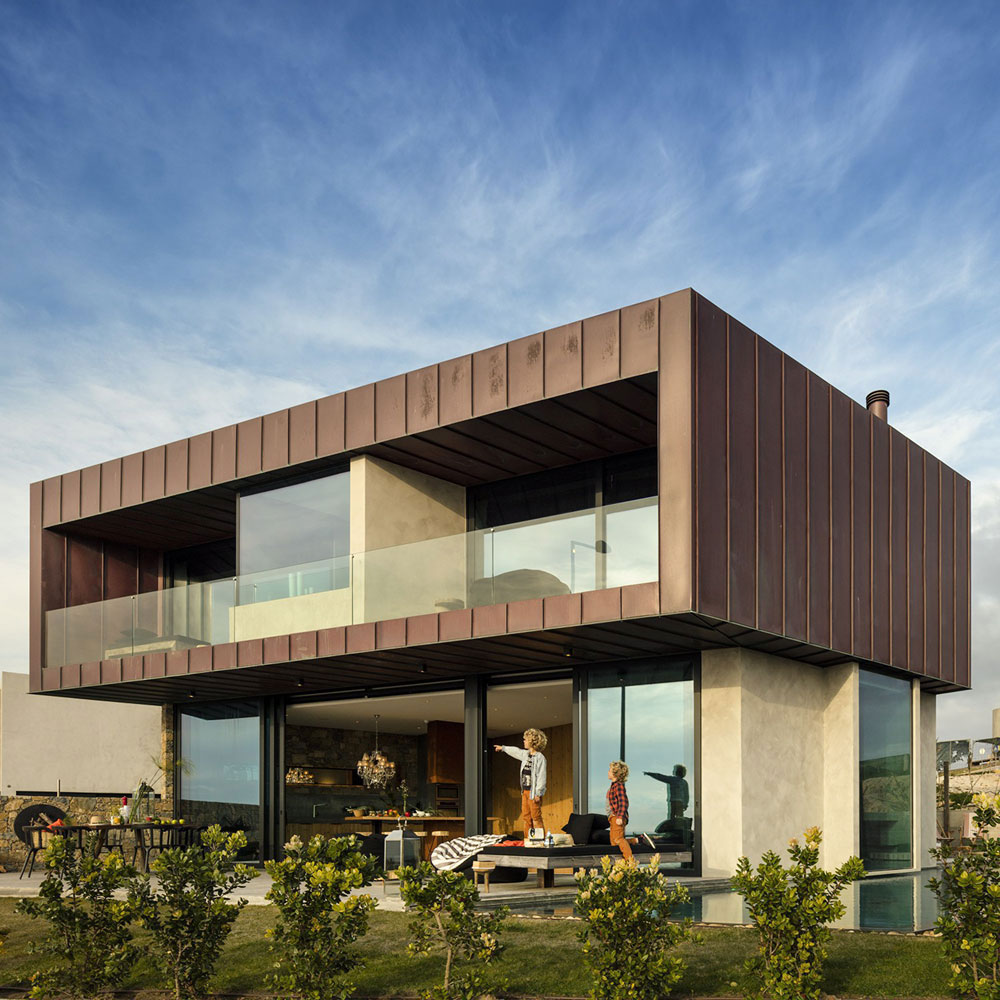 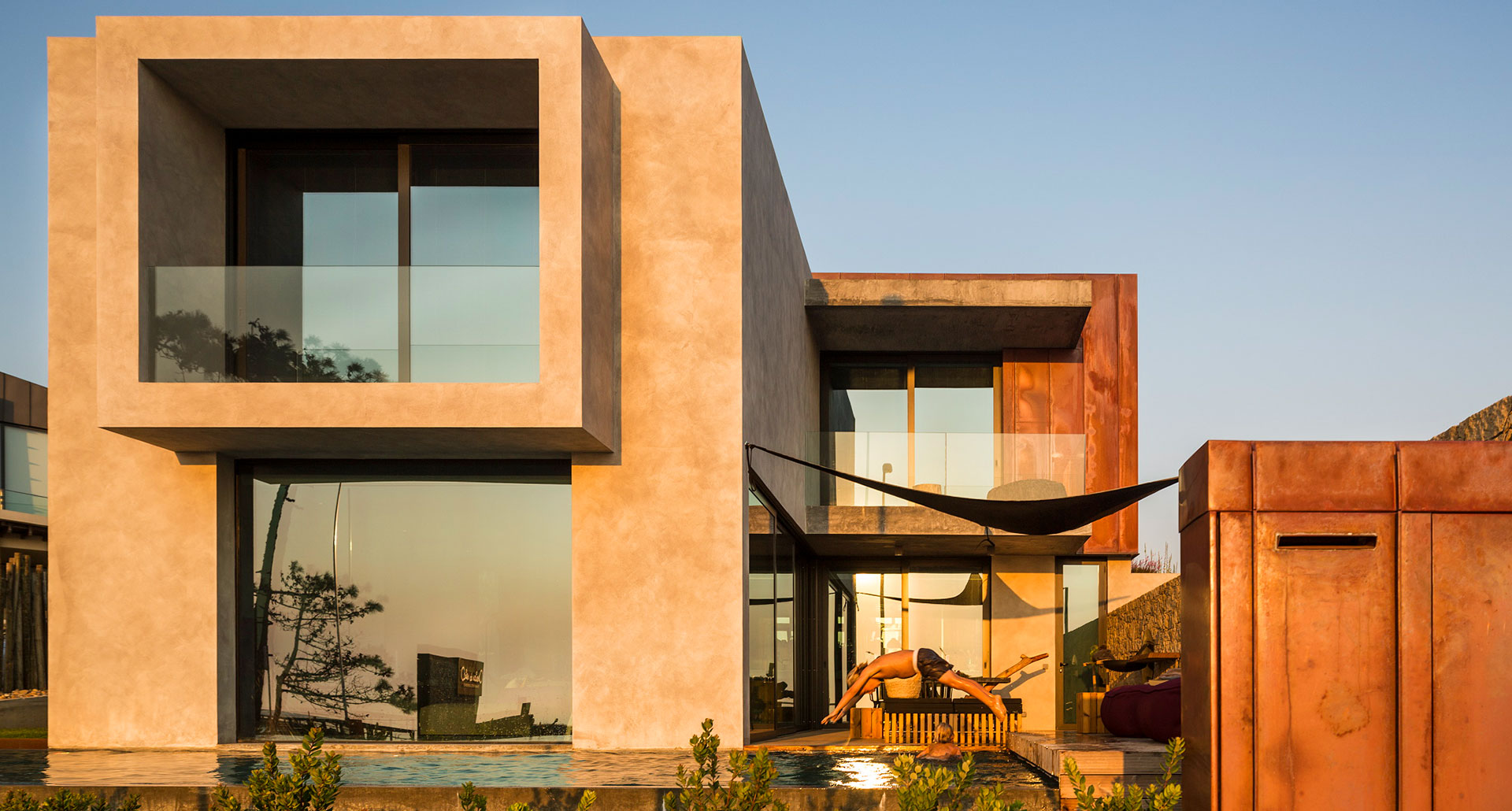 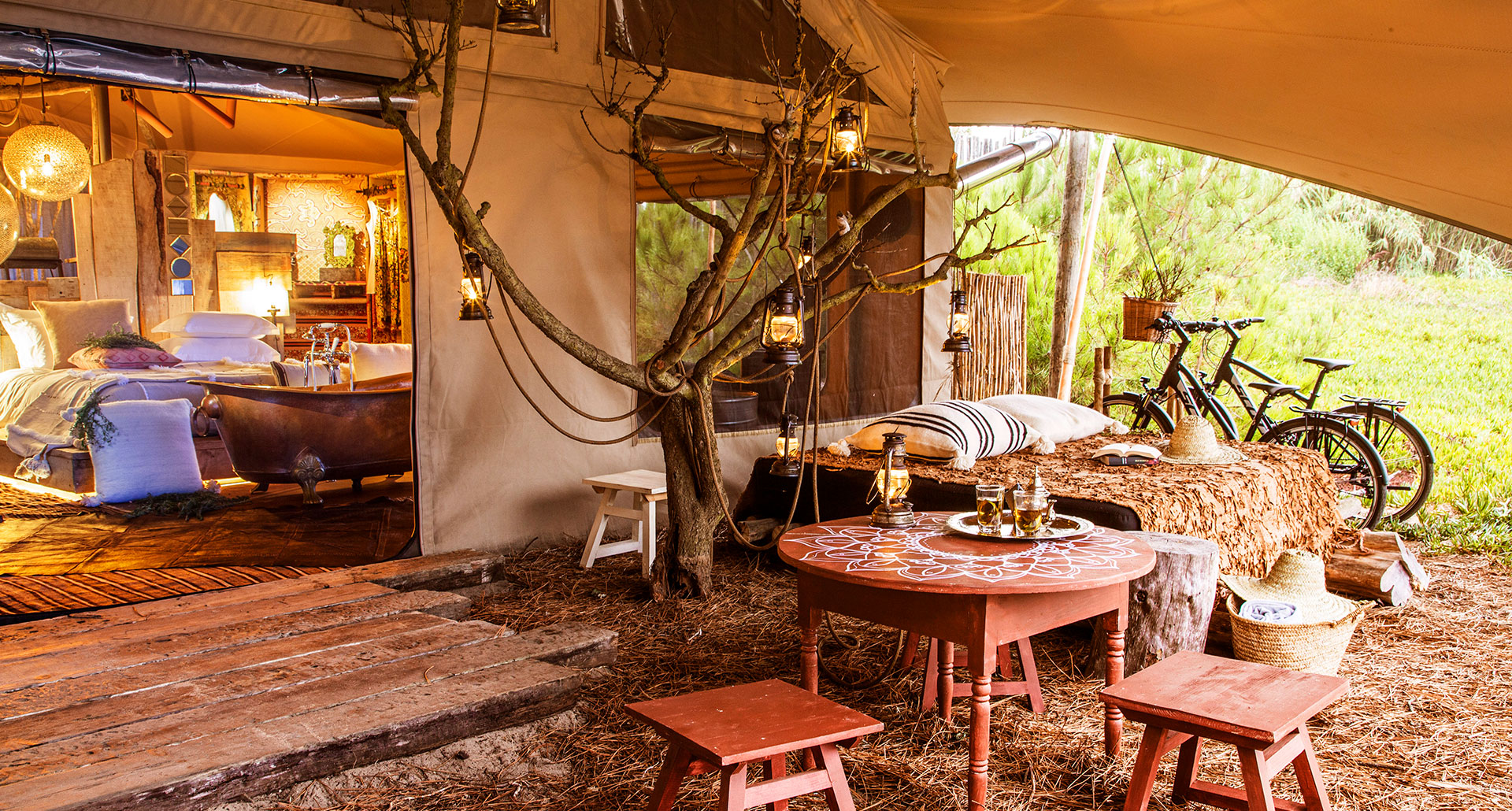 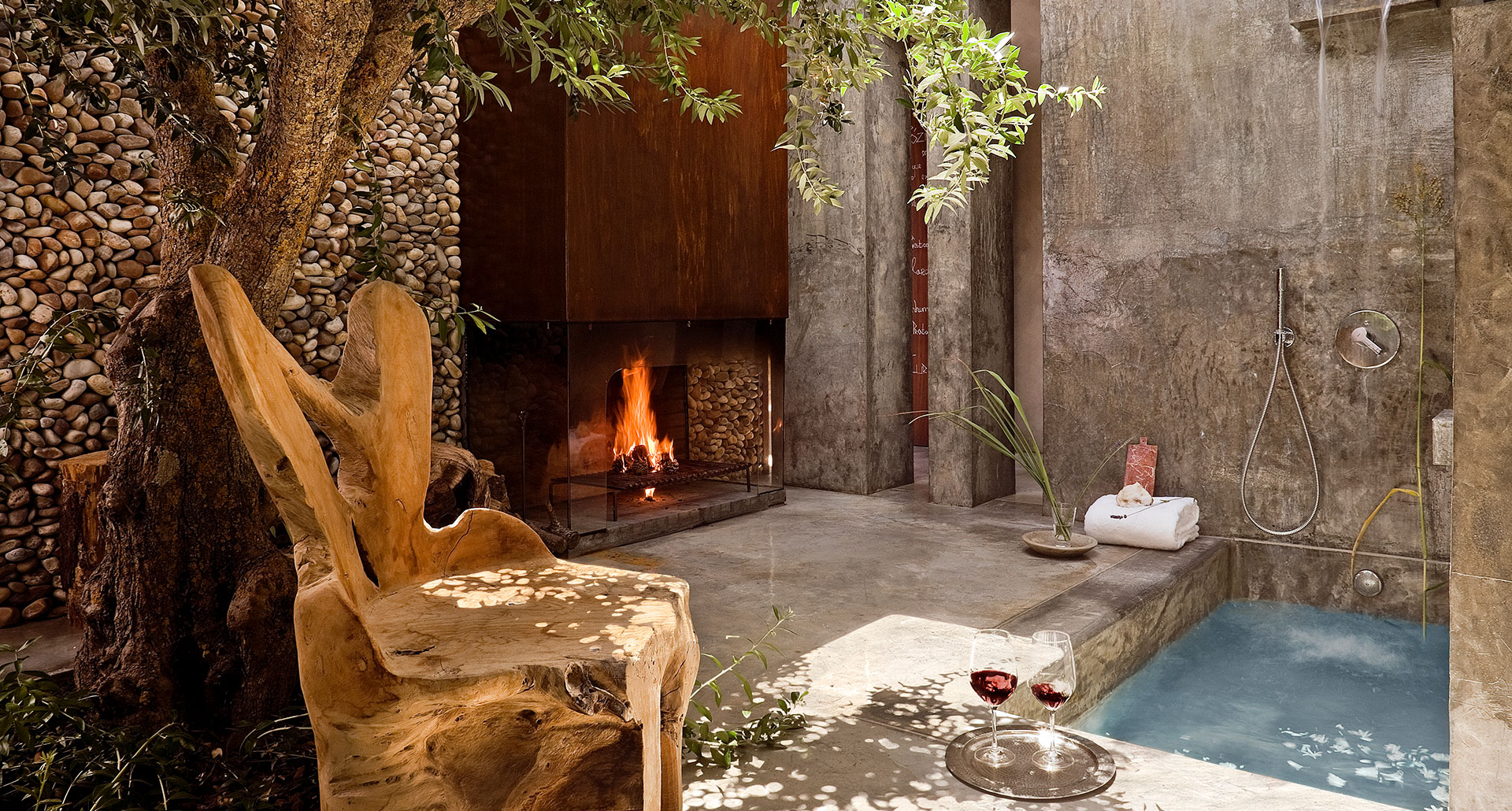 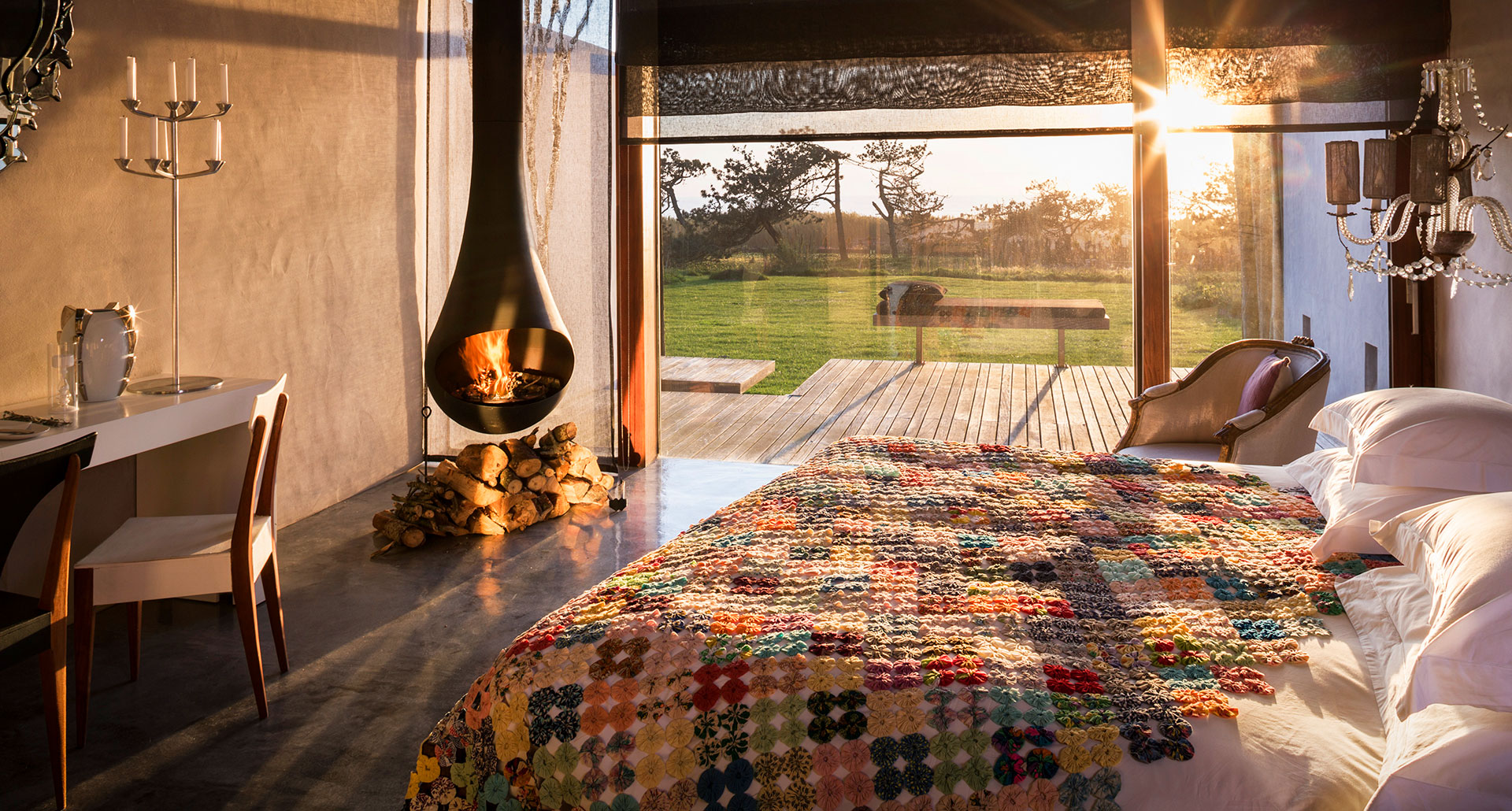 There is perhaps no better example of pure passion than Areias do Seixo. Owners Marta Fonseca and Gonçalo Alves wanted nothing more than to introduce the world to their coastal hometown of Santa Cruz. It took them some eight years to build that dream into a tangible, modern hotel amid the farmland and ocean and dunes — a dream nearly interrupted at one point by a viciously destructive storm. It didn’t stop them. Today, steel plates ripped from one of the villas make up the ceiling lamps in the restaurant, and uprooted trees form benches for guests at the nightly bonfire.

Marta and Goncalo describe this setting, with its “wild Atlantic ocean, rocky cliffs, golden sand dunes, and lush pinewoods,” as their natural habitat. They’ve created a place that honors that habitat, welcoming tourists while relishing in the fact that this particular corner of the country is anything but overrun. It’s the kind of place where a “Circle of Fire” sing-along finishes out the day, where guests gather around a bonfire with a glass of wine for a serenade led by the owners. If it sounds a little bohemian to you, you wont be surprised by the focus too on sustainability, where the rooftop garden supplements an organic farm and greenhouse, and natural materials — regional stone, pebble, glass, and wood — pervade the charming design. 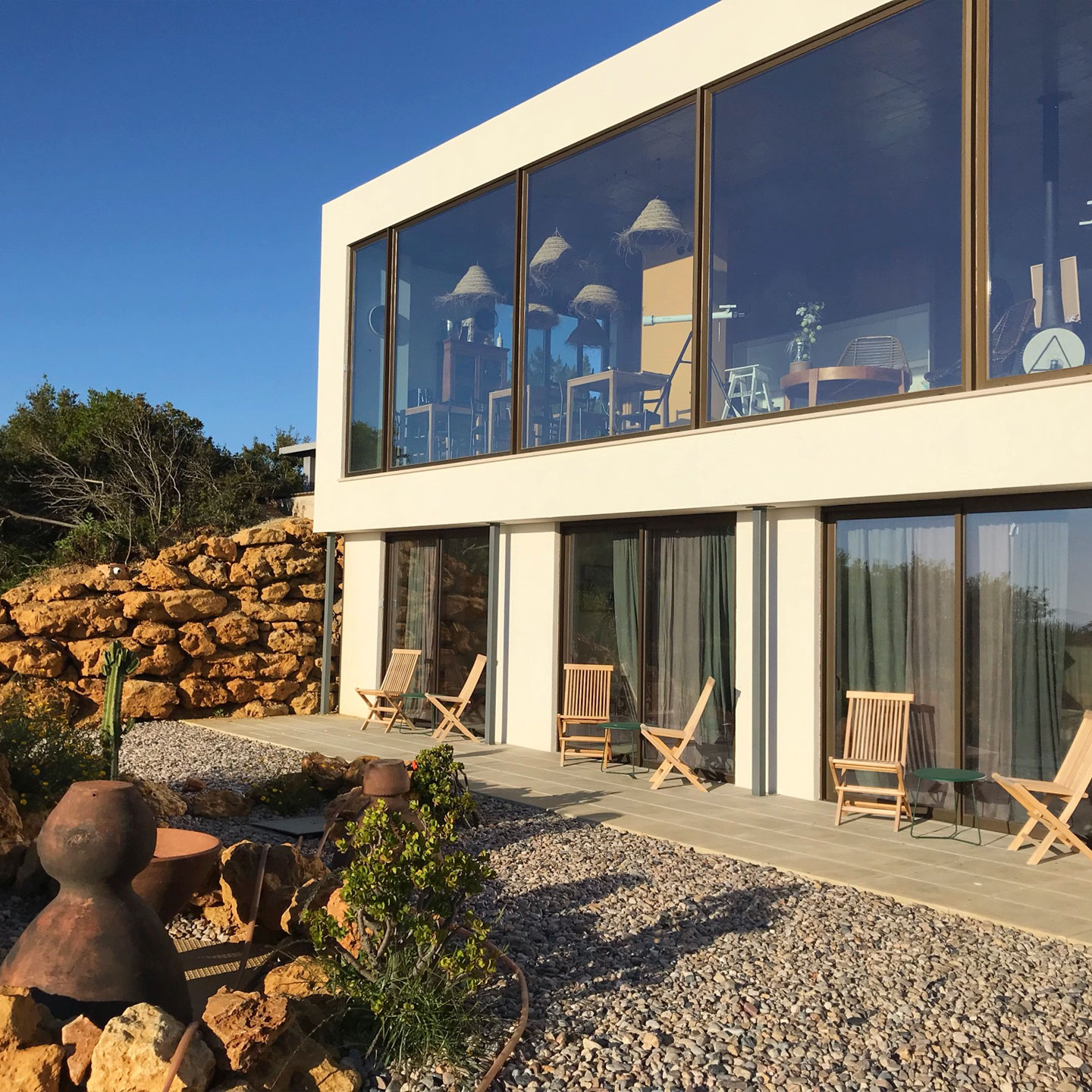 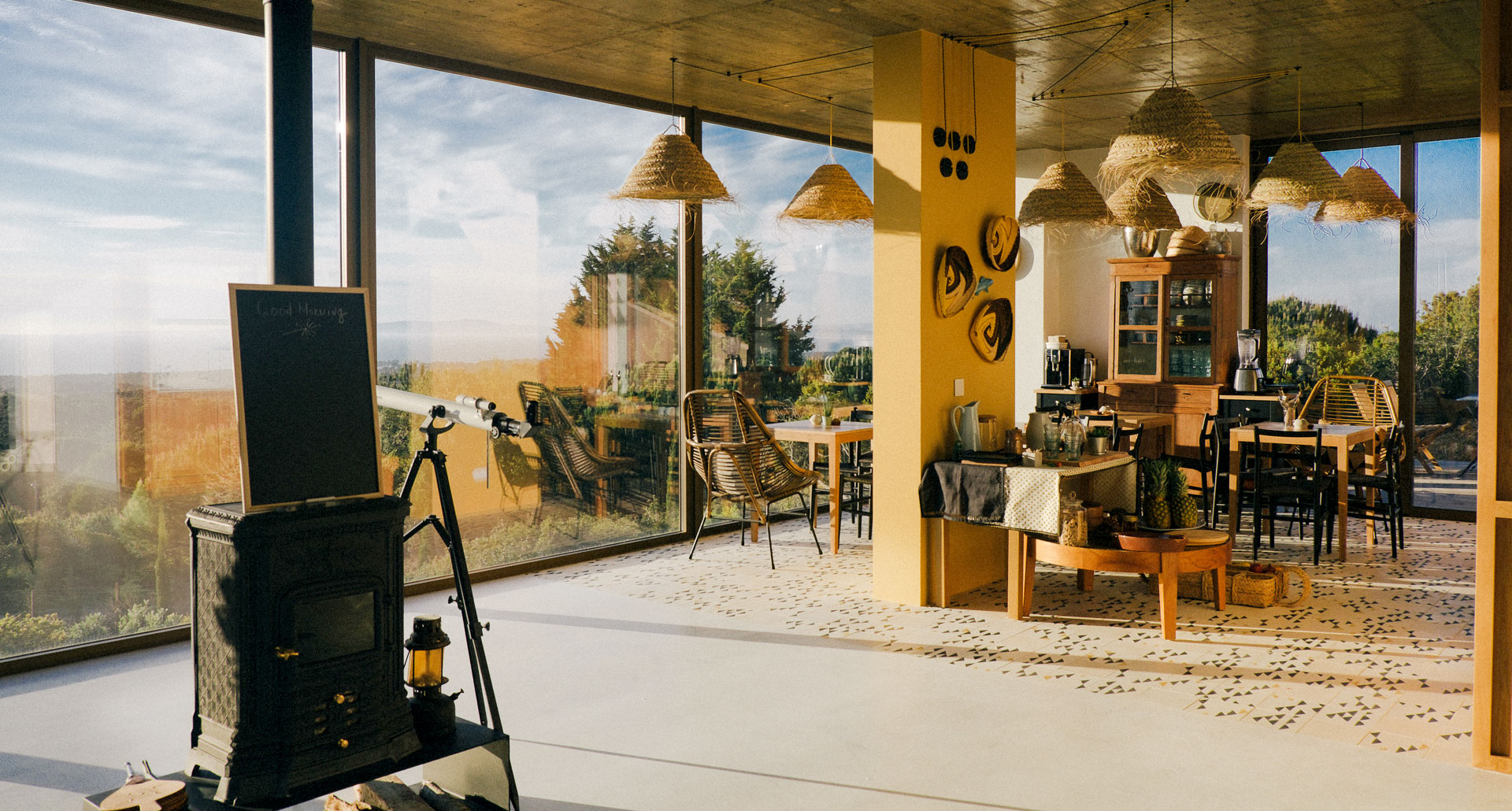 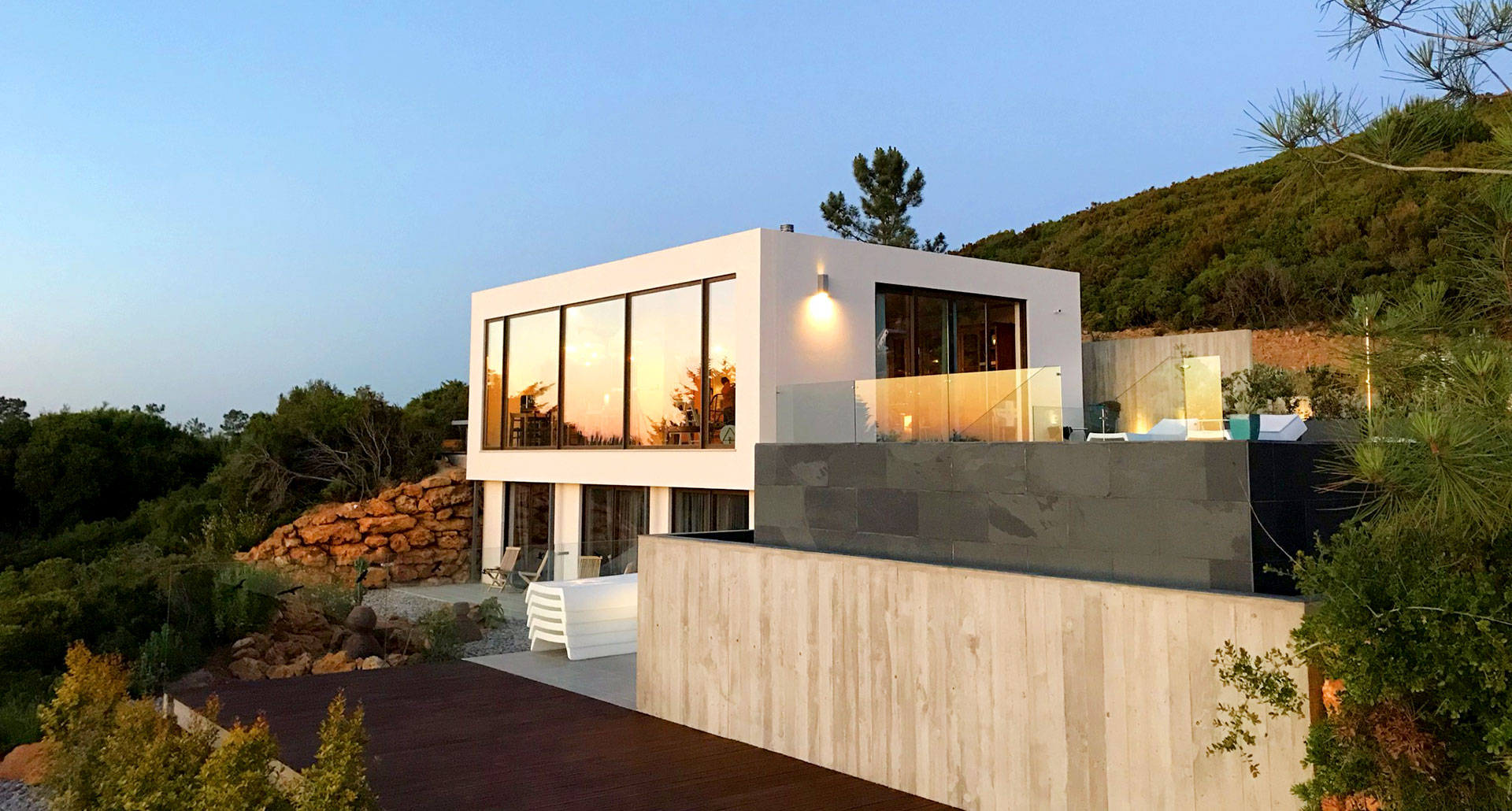 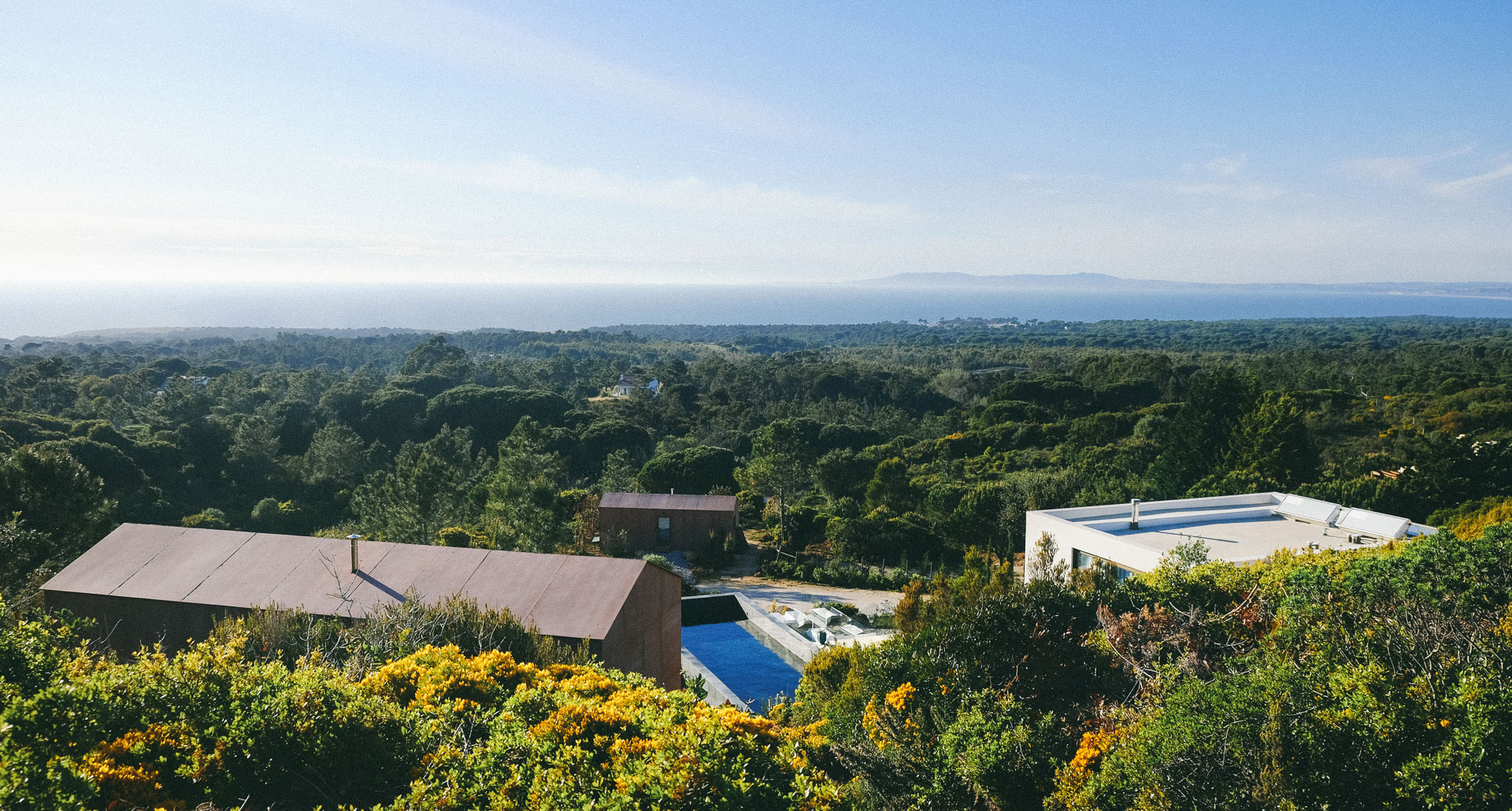 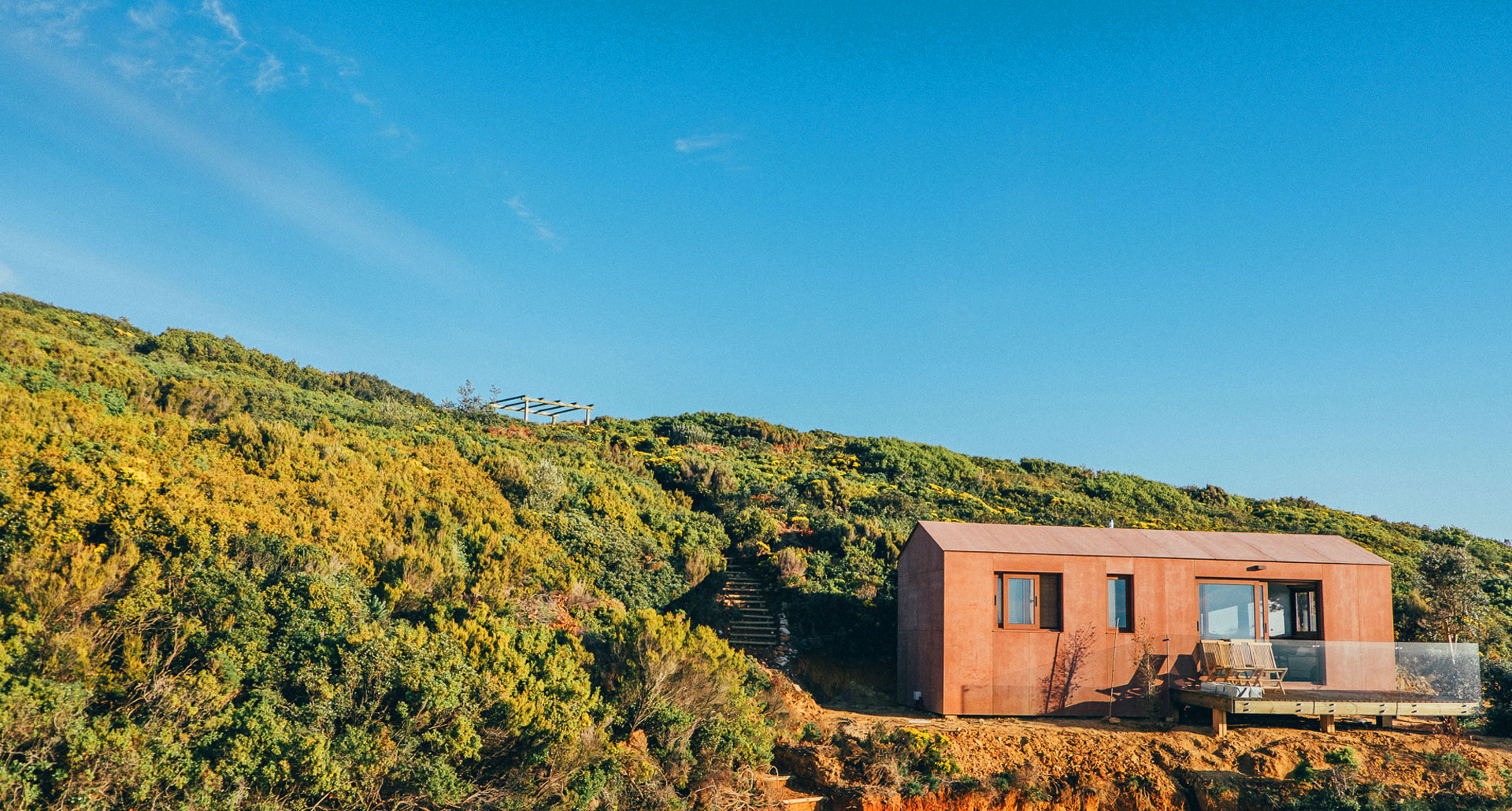 Another decidedly tiny hotel, five rooms, in decidedly rural surroundings (not far from Lisbon) the Villa Epicurea takes its name from the philosophical system of epicureanism. It’s a philosophy wherein the ultimate goal is pleasure through a simple life, and when it comes to ancient Greek theories of thought in modern hotels — we think that’s a pretty solid one.

Marianna, the Russian owner with a background as a photographer, dreamed of opening a sustainable hotel in the midst of nature. That she did, and though it’s less than an hour south of Lisbon, the activities on offer are anything but urban. Excursions throughout the region include birdwatching trips (250 bird species include flamingos), river cruises in the Estuário do Sado natural park (you may spy a dolphin), surfing, diving, snorkeling, and of course winery tours. Stay on site and you’ll indulge in the organic restaurant and marvelous green views from your balcony or terrace. 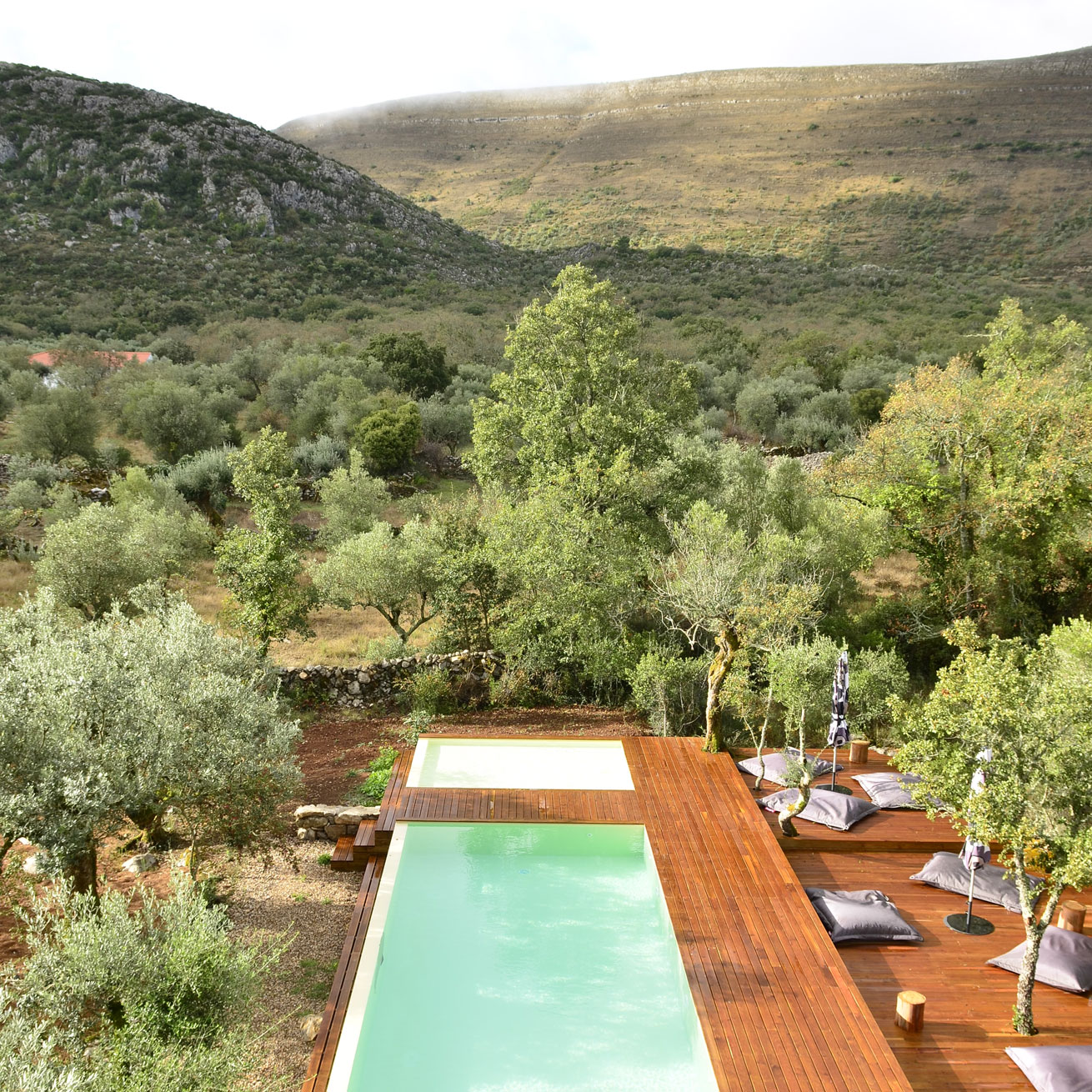 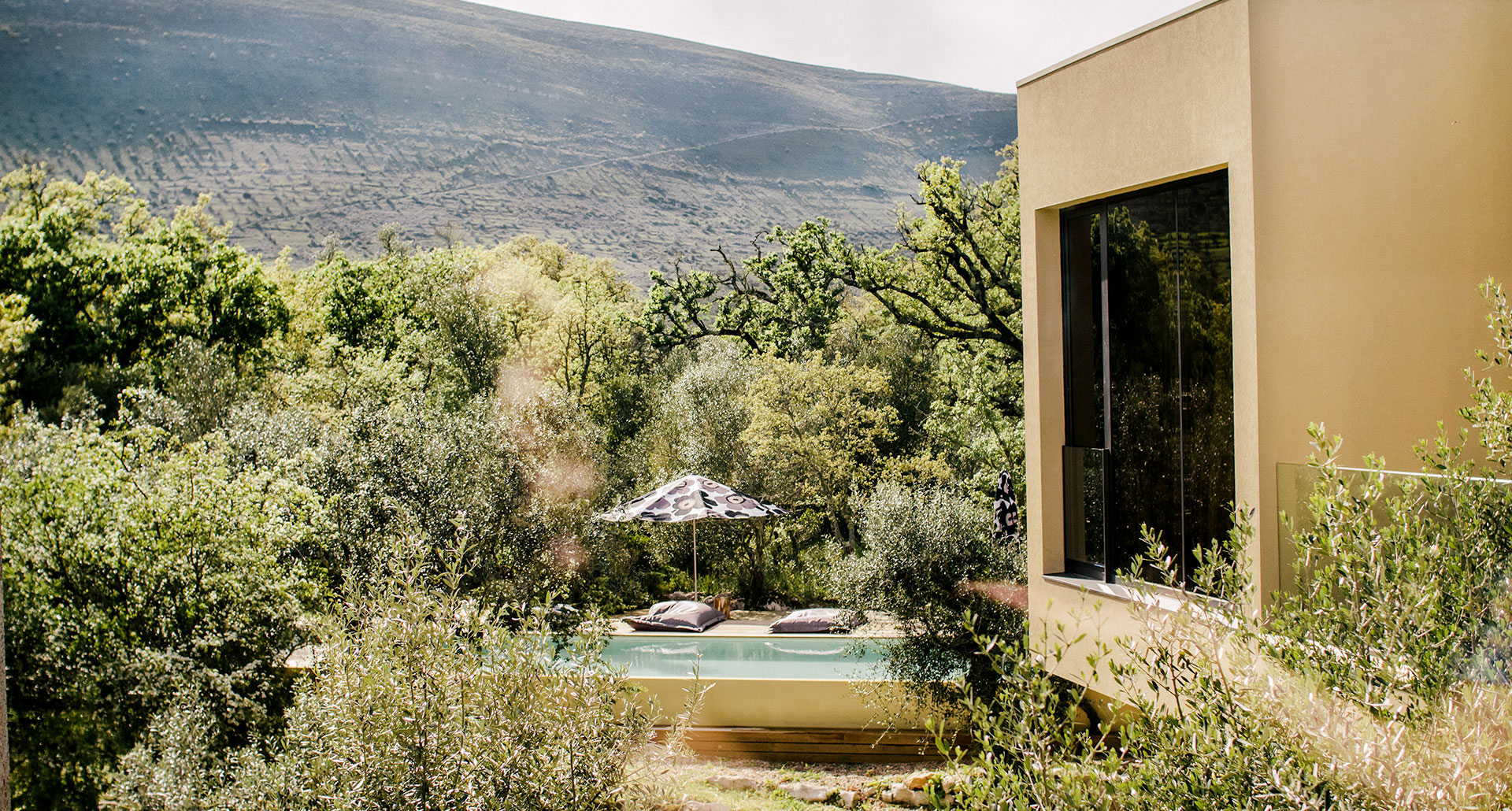 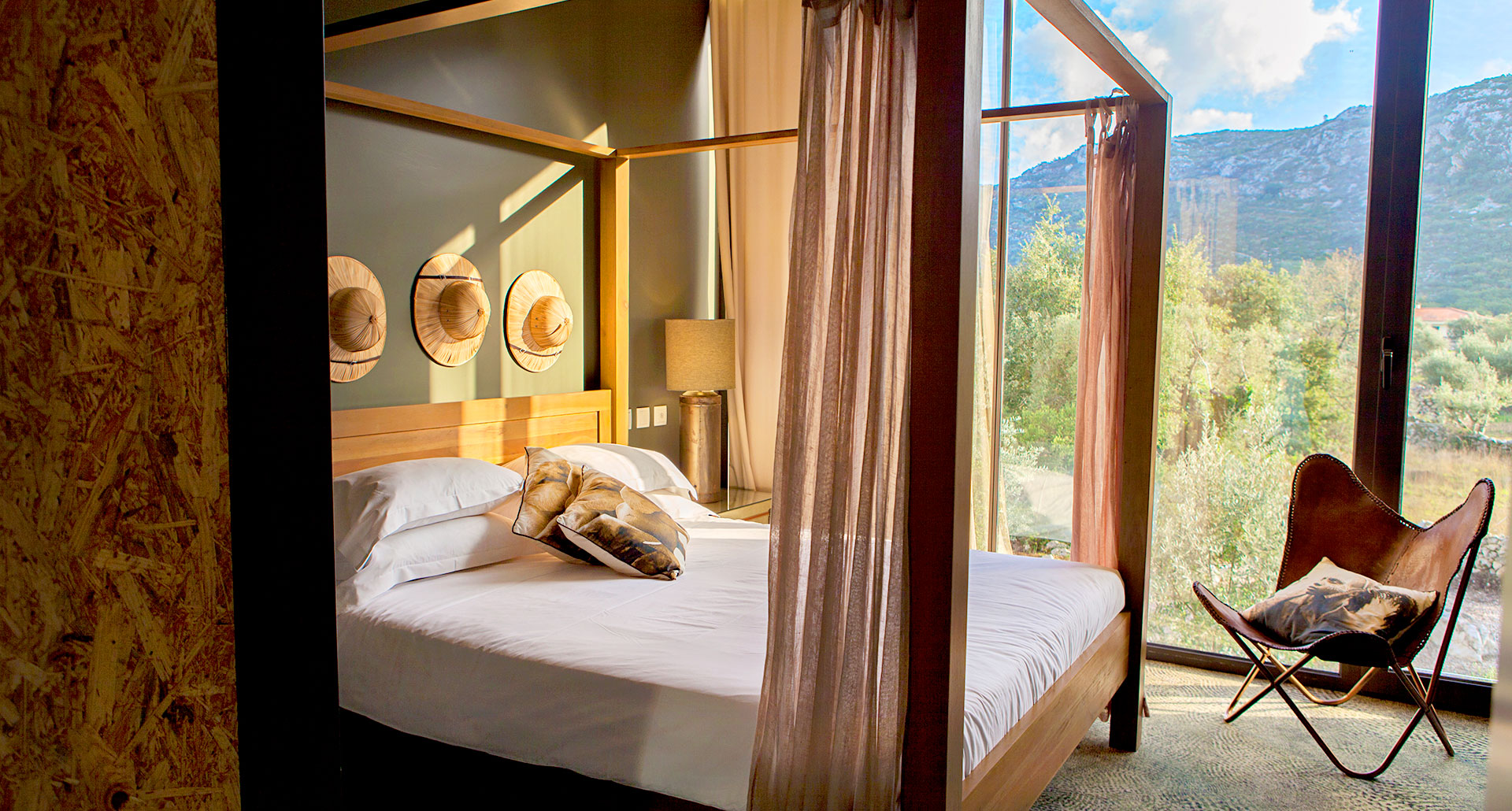 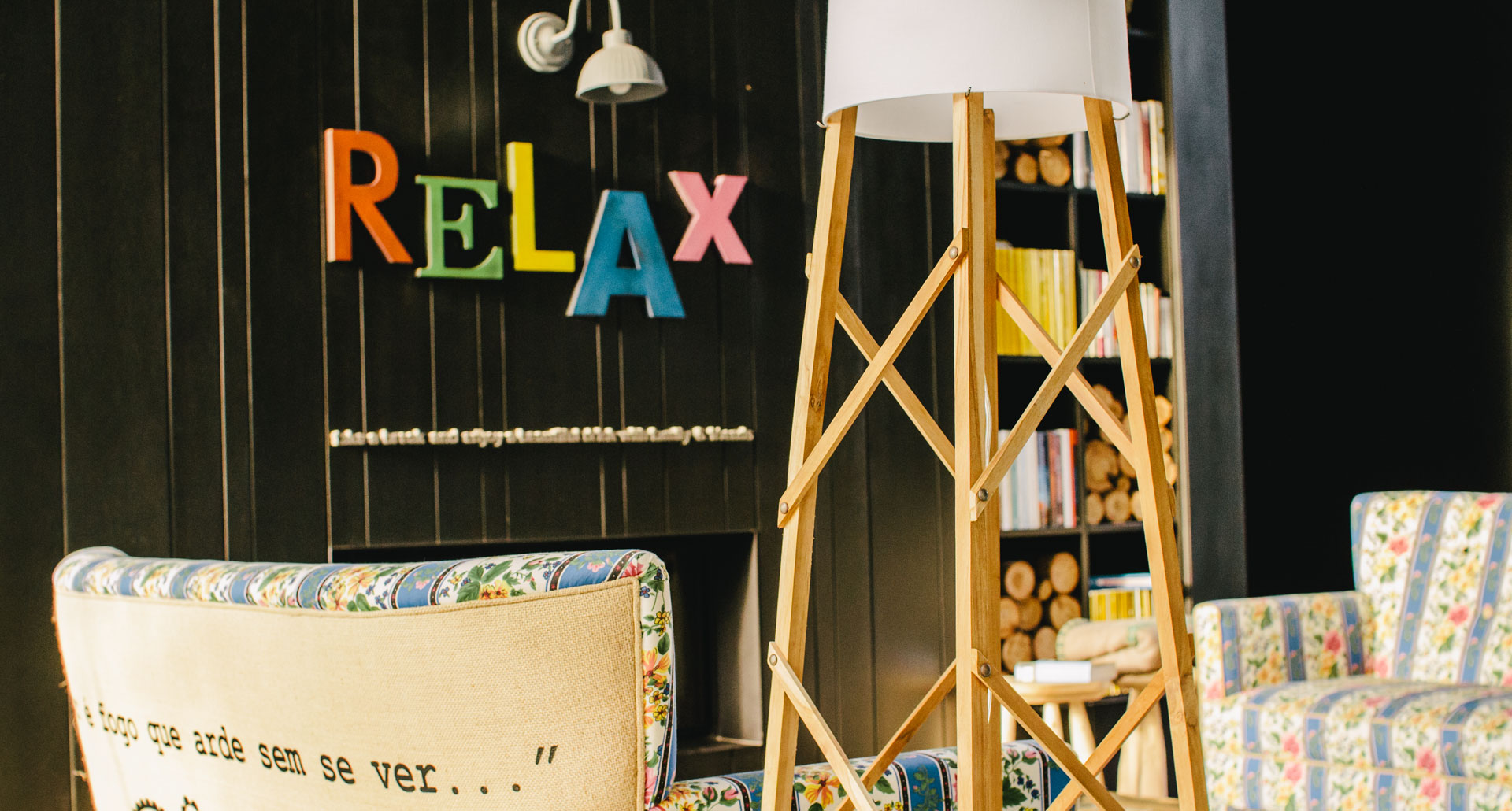 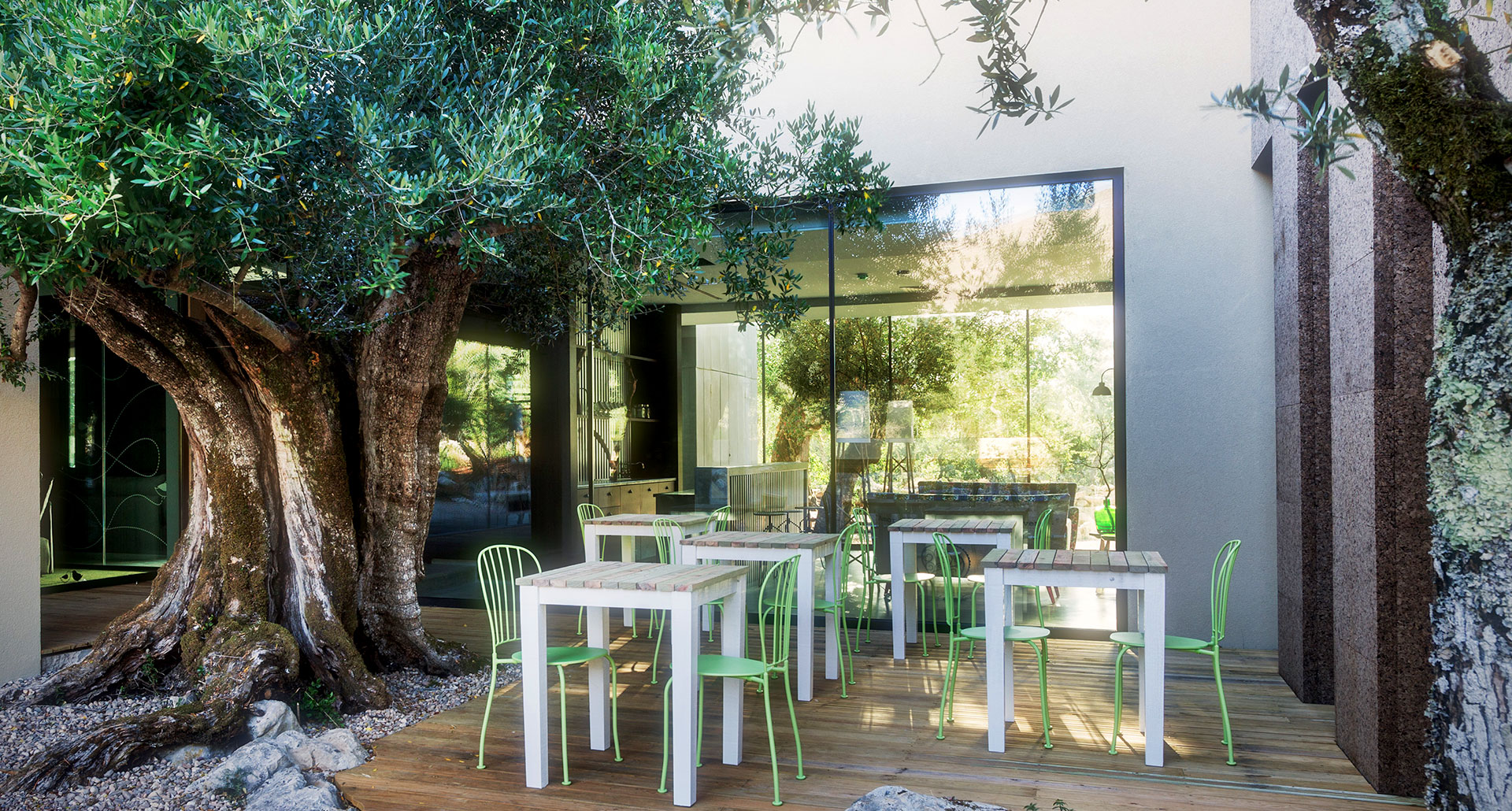 Finally, in the midst of the Serra D’Aire and Candeeiros Natural Park, there’s the Cooking and Nature Emotional Hotel. Another gorgeous destination in the middle of the country, another location nonetheless not undrivable from Lisbon. The design is sleek and beautifully appointed, but you’re probably curious about what makes it so emotional.

That would be the rooms, each inspired by one of twelve emotions, or perhaps more accurately, feelings or conditions. Take one room — Sensuality — inspired by French cabarets and decorated with deep reds and golds. Or another — the Happiness room — where you’ll find a whimsical, mushroom-shaped nightstand and a medley of electric blues and greens. Cooking lessons, with the assistance of a modern chef and local cheese, olive oil, and garden-grown ingredients, fill out the rest of the title.

Forward Into the Future

Portugal has been one of the hottest destinations for travel in the past half decade, if not more. But those in the midst of its rise say it hasn’t nearly reached its peak. “We’ve seen a lot of [travelers] coming to Portugal over the last five years,” Savatier, of Villa Extramuros, tells Tablet. “But I think it’s only the beginning.” The golf courses, the beaches, and the big cities have been thoroughly discovered throughout the rise of Portuguese tourism — but will the remote rural regions and their incredibly designed hotels get the travelers necessary to fill all of their guest rooms for years to come? Savatier thinks so, and is confident that the interest is about to explode beyond what we’ve already seen. We’ll have to see how it plays out. One thing we do know is that the hoteliers are ready to share.