Portugal is one of the world’s hottest tourist destinations, due in no small part to the number of exciting new hotels opening throughout the country.

It would no longer be accurate for us to suggest that Portugal is under-the-radar. Over the past decade the country has grown into one of the most desirable travel destinations in the world — a status, we must point out, it has always deserved. There are a lot of reasons for its relatively sudden popularity, but the one we’re most interested in is the explosion of unique hotels.

Hotels throughout the country are leading the way when it comes to innovative design. That might not be surprising in larger cities, of course, but Portugal also has an impressive collection of truly cutting-edge hotels in rural locations. It’s another solid indicator of how much the hospitality world has changed in the wake of the boutique hotel boom. Where once there would have been substantial risk in targeting a younger, design-savvy audience with a hotel located far outside an urban center, there now may be the greatest possible upside. 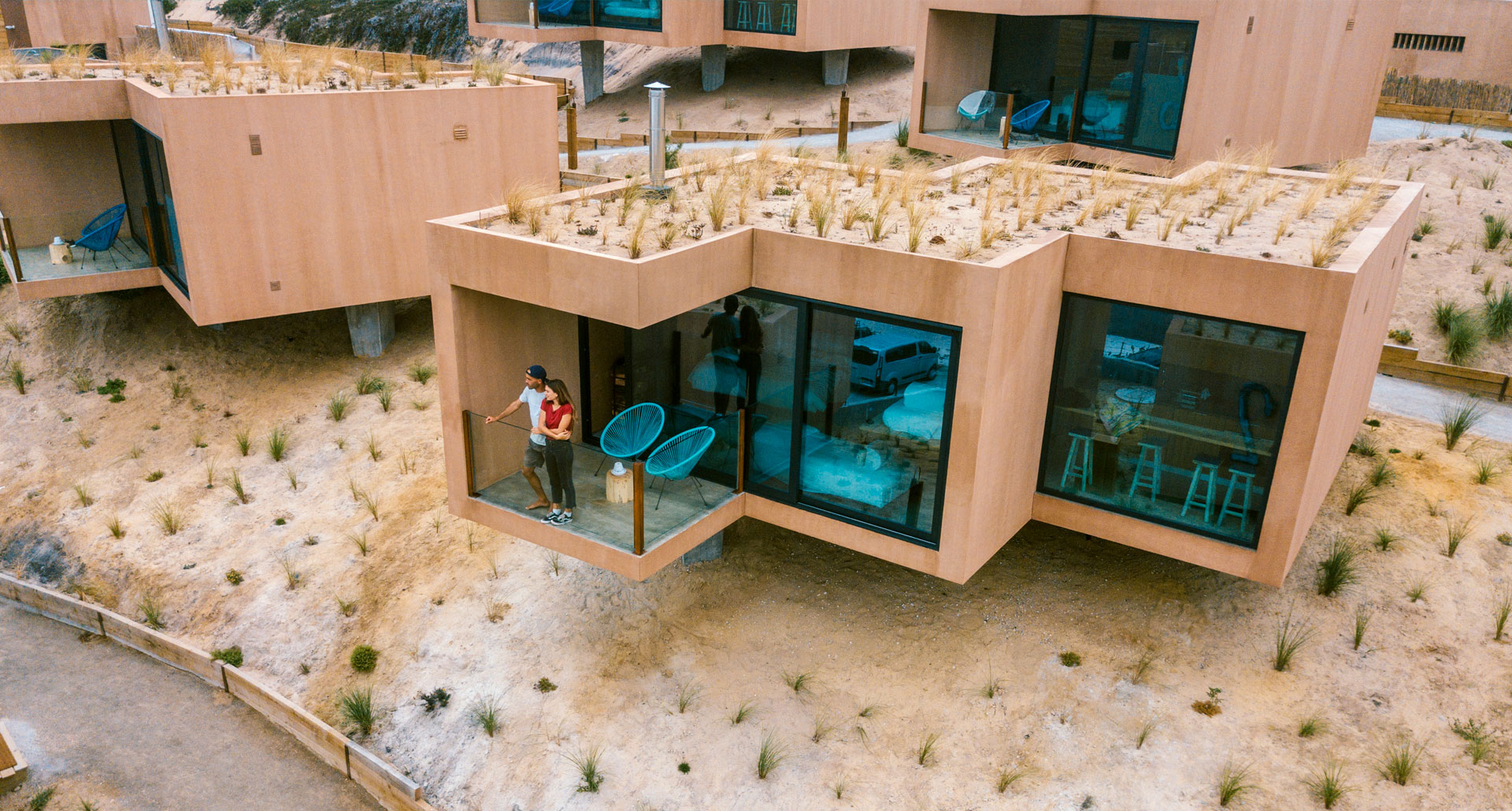 Noah Surf House in Santa Cruz sounds like the purest essence of California — and it is, in spite of the fact that it’s not on the Pacific, but the Atlantic coast of Portugal. It’s everything you’d want from a hip, laid-back, bohemian boutique surf hotel, plus a generous helping of the ultra-sleek modernist architecture and design that has somehow become the new standard among Portuguese hotels.

You and the Sea – Hotel and Apartments 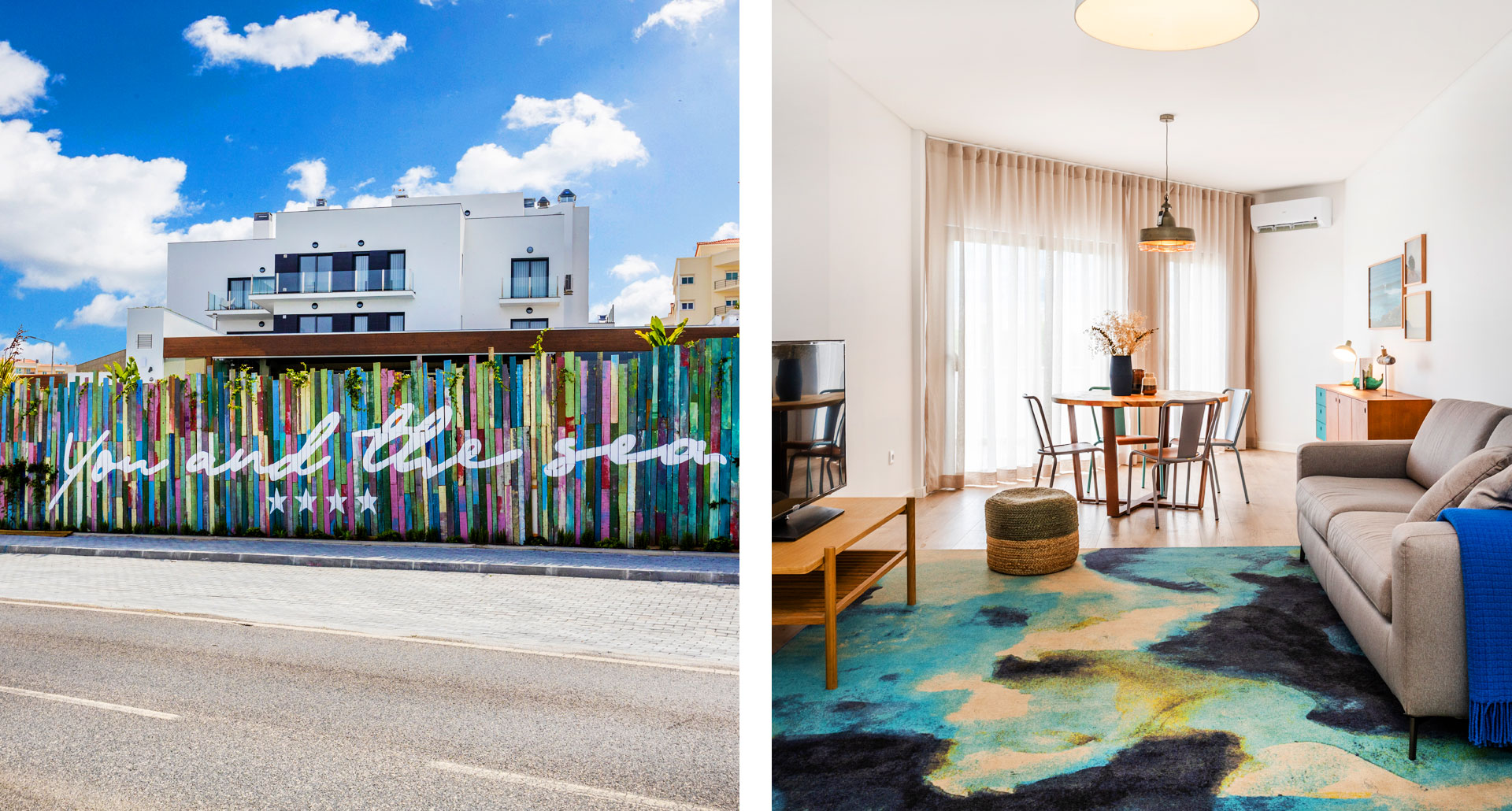 It’s an unusual name, but it certainly paints a picture. You and the Sea pretty well sums up the experience at this stylish apartment-style boutique hotel, set within walking distance of Praia do Sul beach, in the Portuguese surf mecca of Ericeira. Sure, it’s not just you — but from within one of its 36 fully serviced apartments, which range from generously sized studios all the way up to sprawling five-bedroom family apartments, it’s not at all hard to forget about the rest of the world. 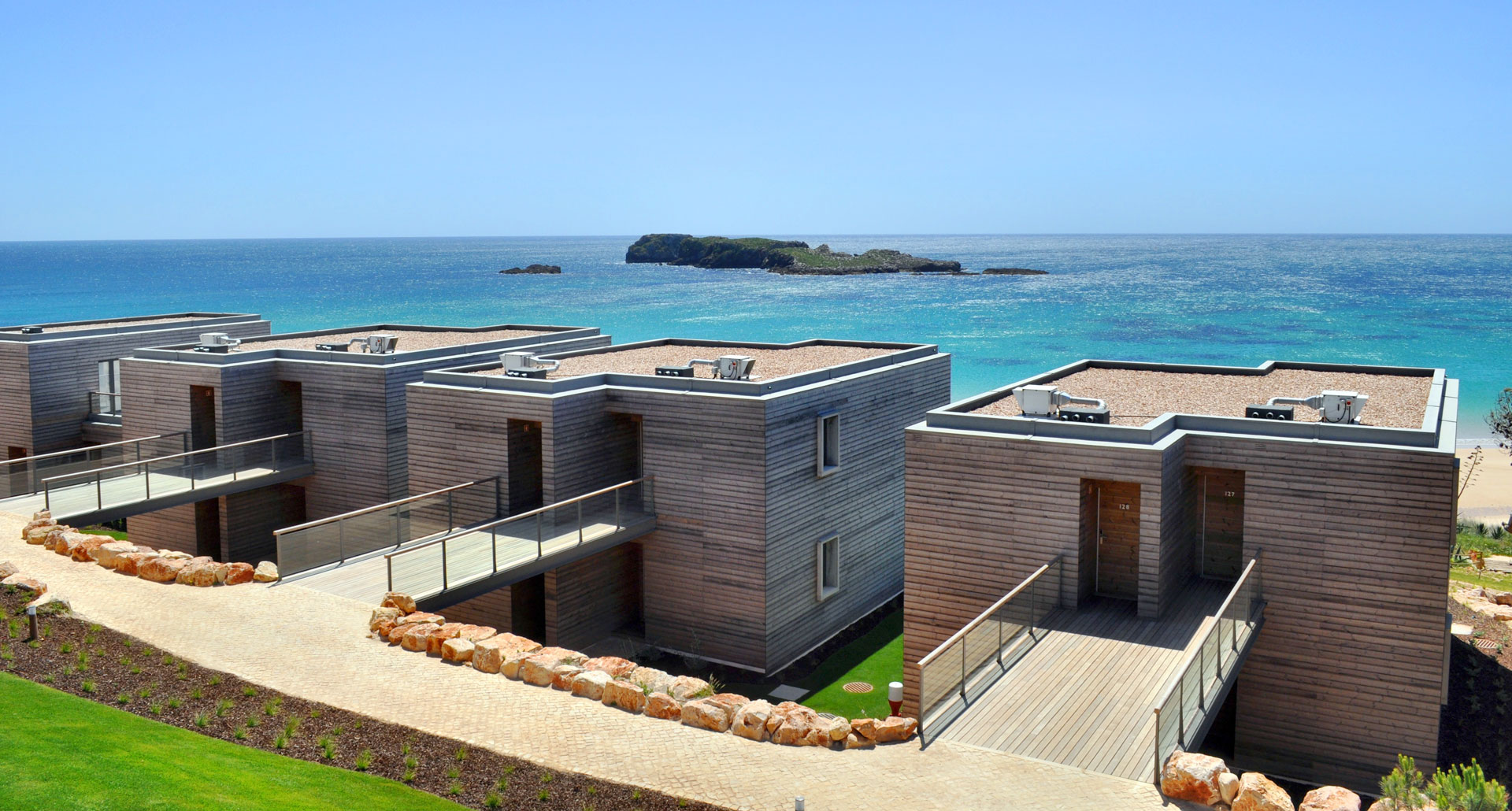 You keep thinking there’s no way the Algarve coast can keep dazzling, but it just keeps going, beach after unspoiled beach, eating up a whopping two hundred kilometers of southern Portugal. That’s plenty of space for every kind of hotel to host the millions of sun-seekers that descend upon the beaches during the summer. It makes perfect sense, then, for a place like Martinhal Beach Resort and Hotel to contain multitudes; an ambitious offering of varied guest-room styles with the facilities and amenities of a massive luxury resort, and a place particularly well-suited to families traveling with young children. 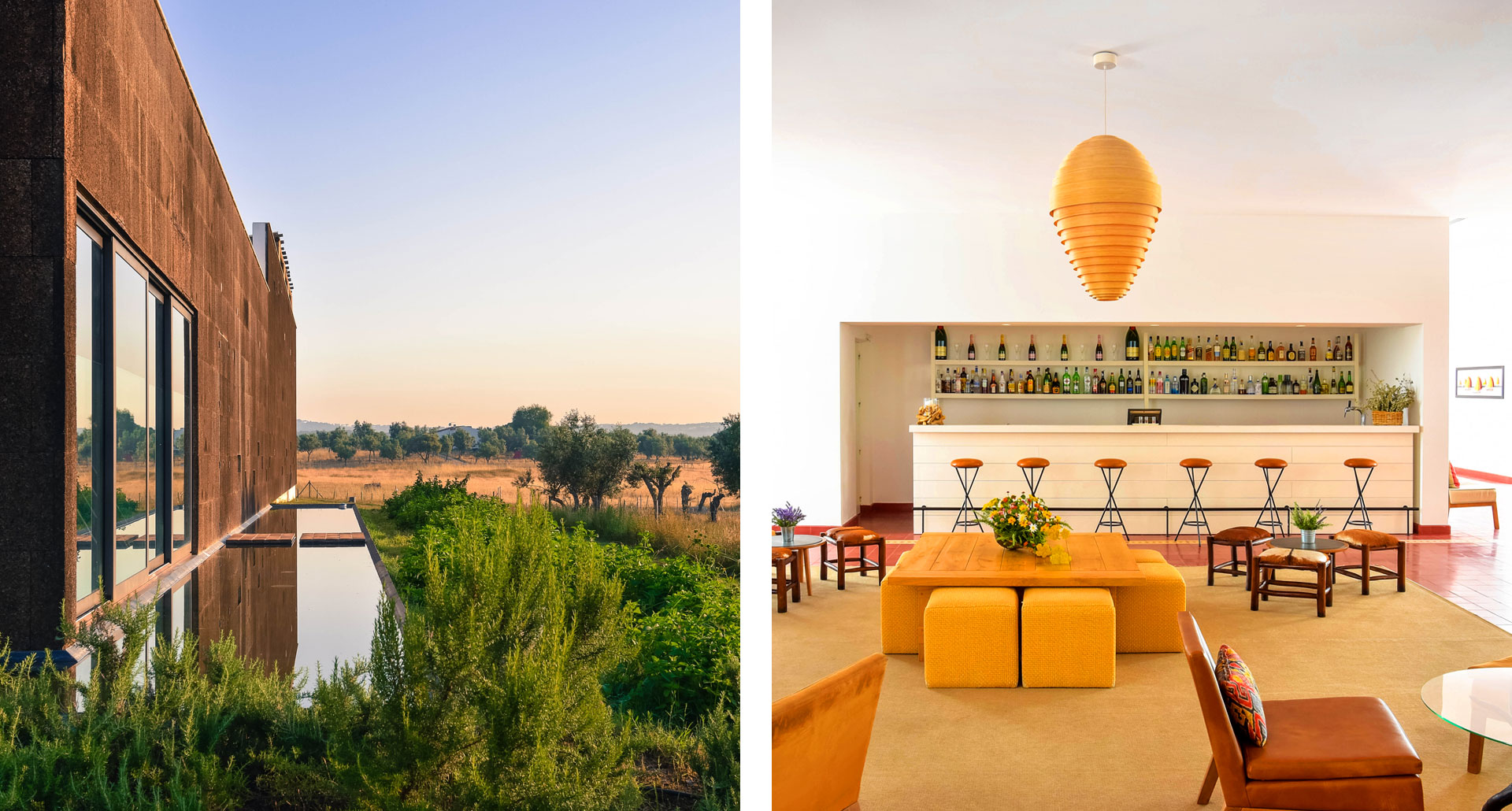 Every corner of Portugal seems to be experiencing a travel boom, and Évora, in the inland region of Alentejo, is no exception. Just outside the city of Évora itself, and only an hour from Lisbon, you’ll find the Tivoli Évora Ecoresort, a sustainable, energy-efficient boutique-style escape made up of cube-like contemporary villas, divided into 56 spacious suites complete with private terraces overlooking the Alentejo countryside. 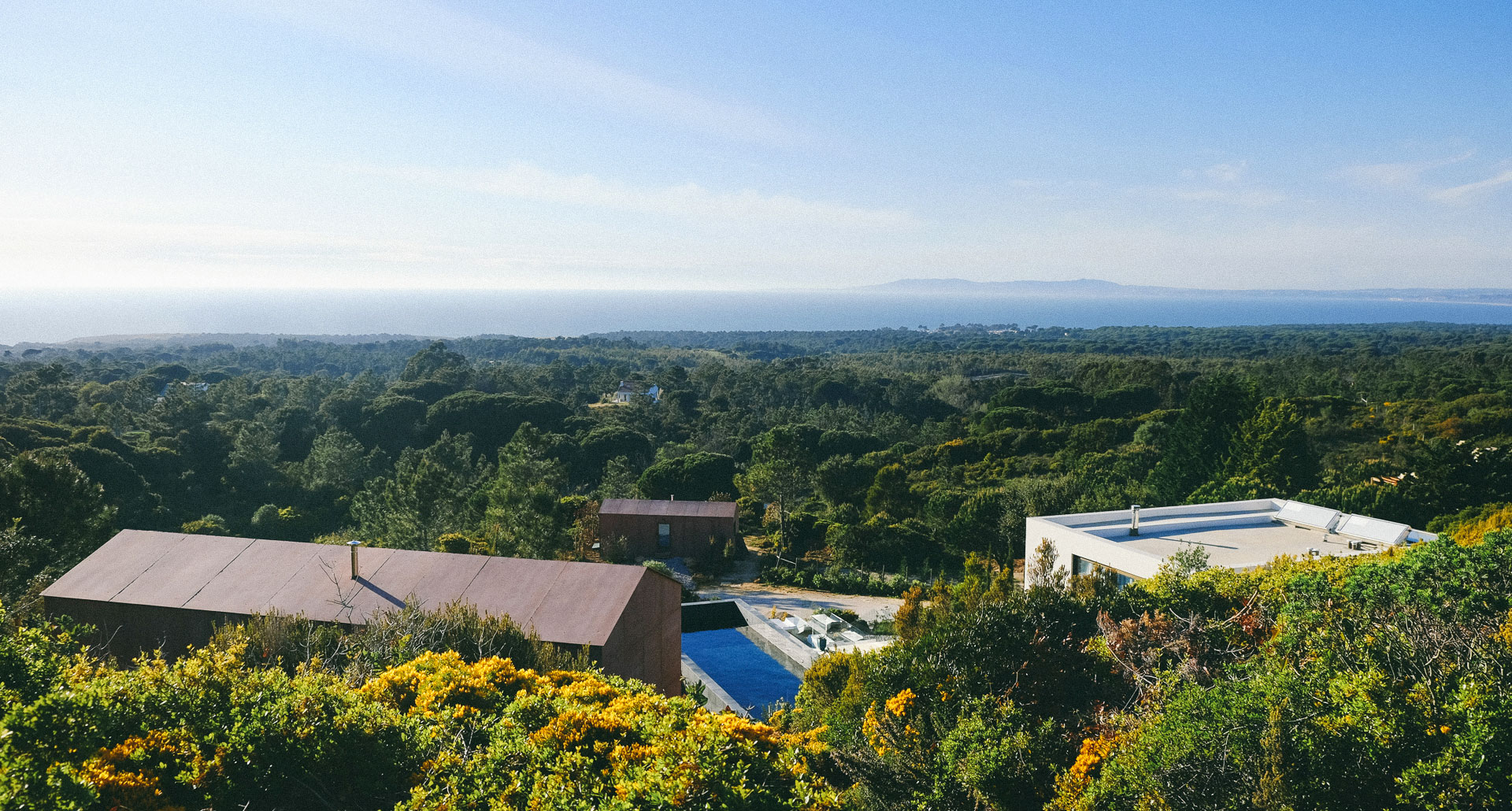 We use the word “epicurean” for anyone with a particular love of food, comfort, or other luxury — but the historical Epicurus went farther than that. For the Epicureans, earthly pleasures weren’t pursued in a gluttonous way, but were tempered with wisdom and restraint. Villa Epicurea is a stunning boutique-sized eco-resort in Serra da Arrábida, just south of Lisbon, featuring an organic restaurant and excursions to nearby wineries and nature reserves. 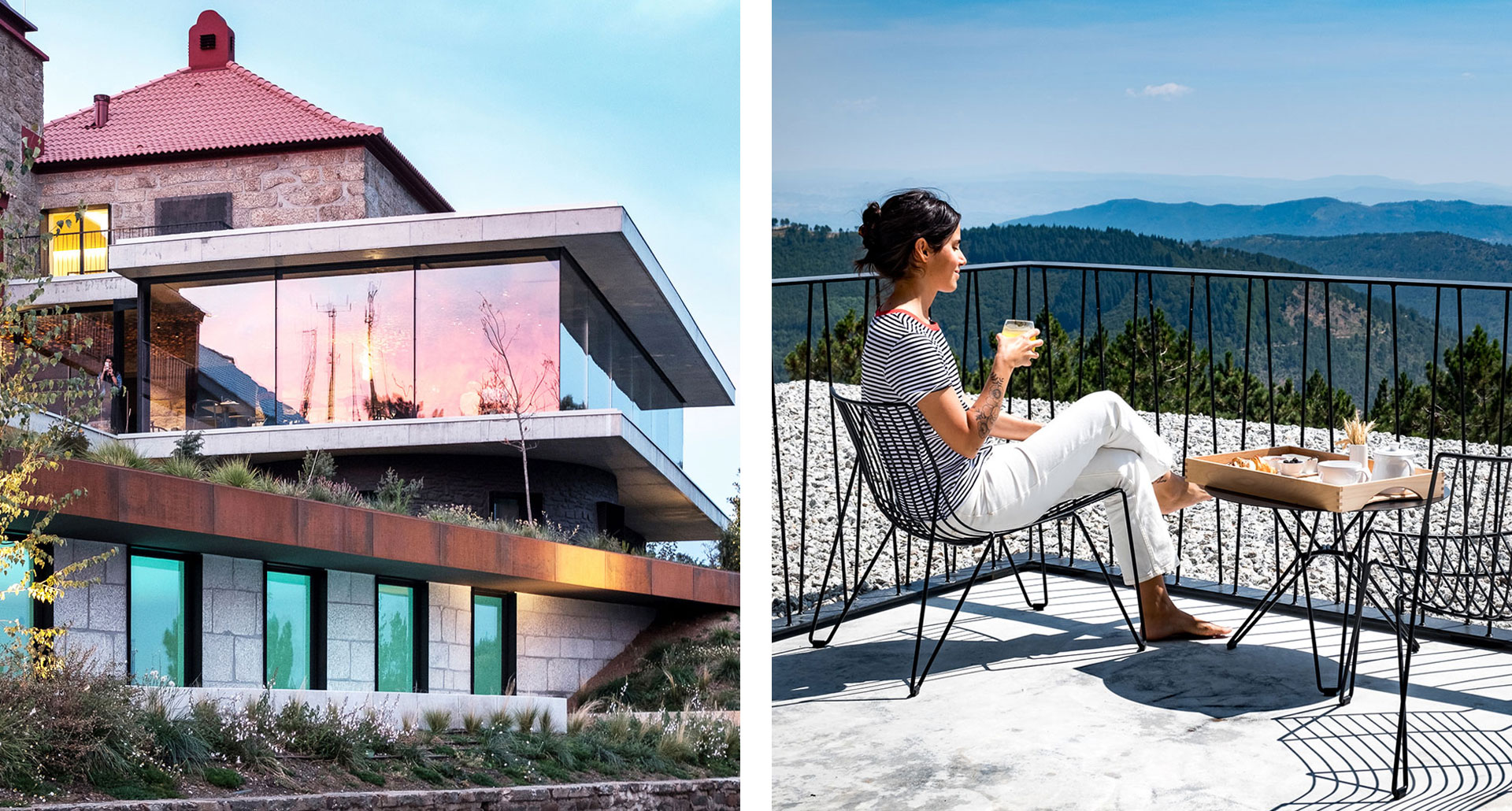 It’s incredible, given the density of high-luxury, high-design boutique hotels all across the rest of Portugal, but Casa de São Lourenço is the only luxury hotel in the Serra da Estrela mountains. Perhaps even more noteworthy, however, is the fact that it’s an impressive piece of architecture, where studios P-06 and Site Specific have grafted an ultra-modern concrete structure onto a classically styled Forties mountain inn. 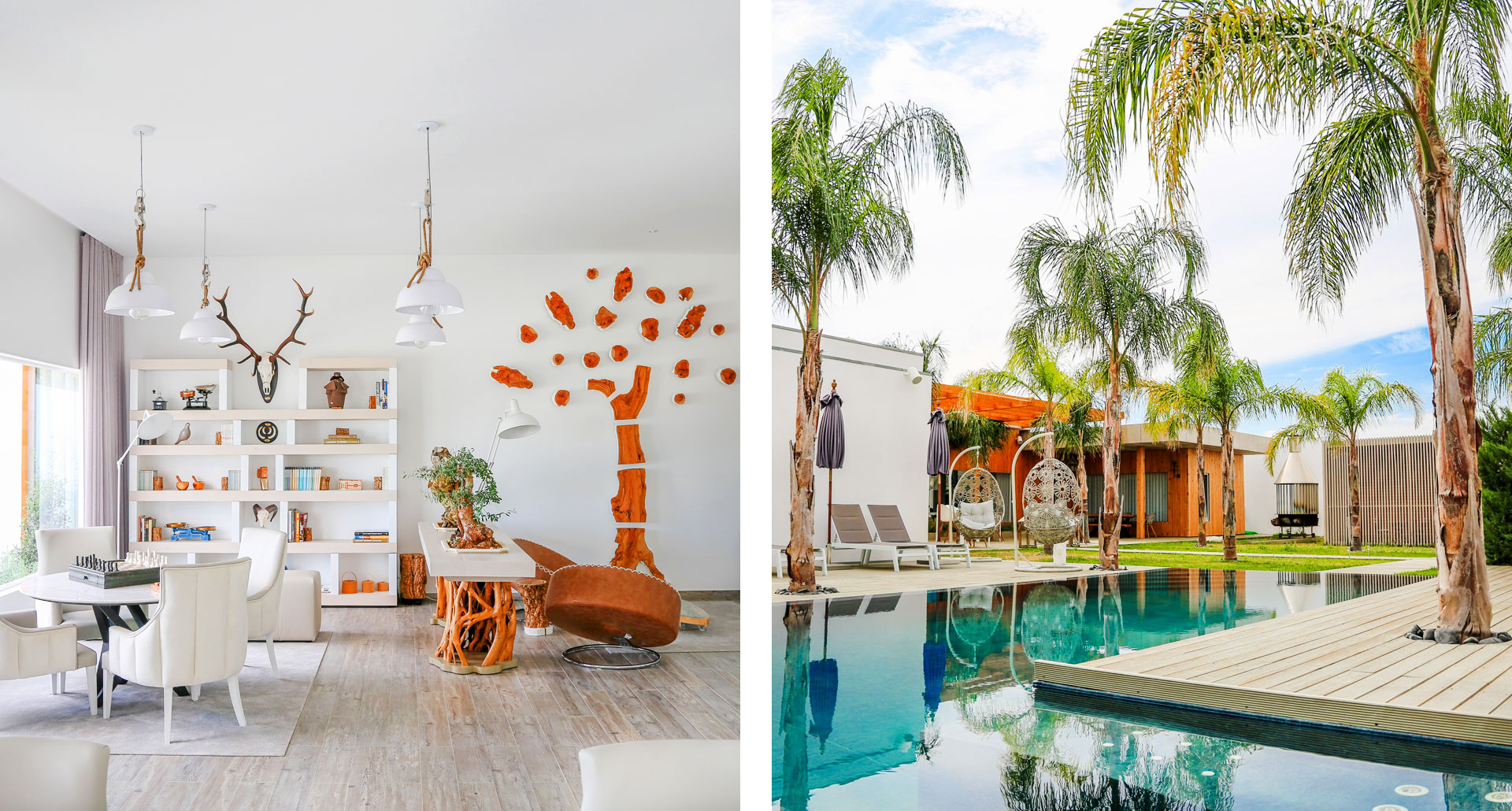 It’s not just Portuguese tourism that’s on the ascendant, but Portuguese winemaking as well. Which means it’s the perfect time for a hotel like Herdade da Rocha Boutique. It’s set on a winemaking estate in the Alto Alentejo, the site of the Couto Saramago winery, whose vineyards and gardens are now joined by a stylish contemporary lodge. After all, there’s only so much you can learn about the land from the wine’s terroir — there’s no substitute for being there yourself. 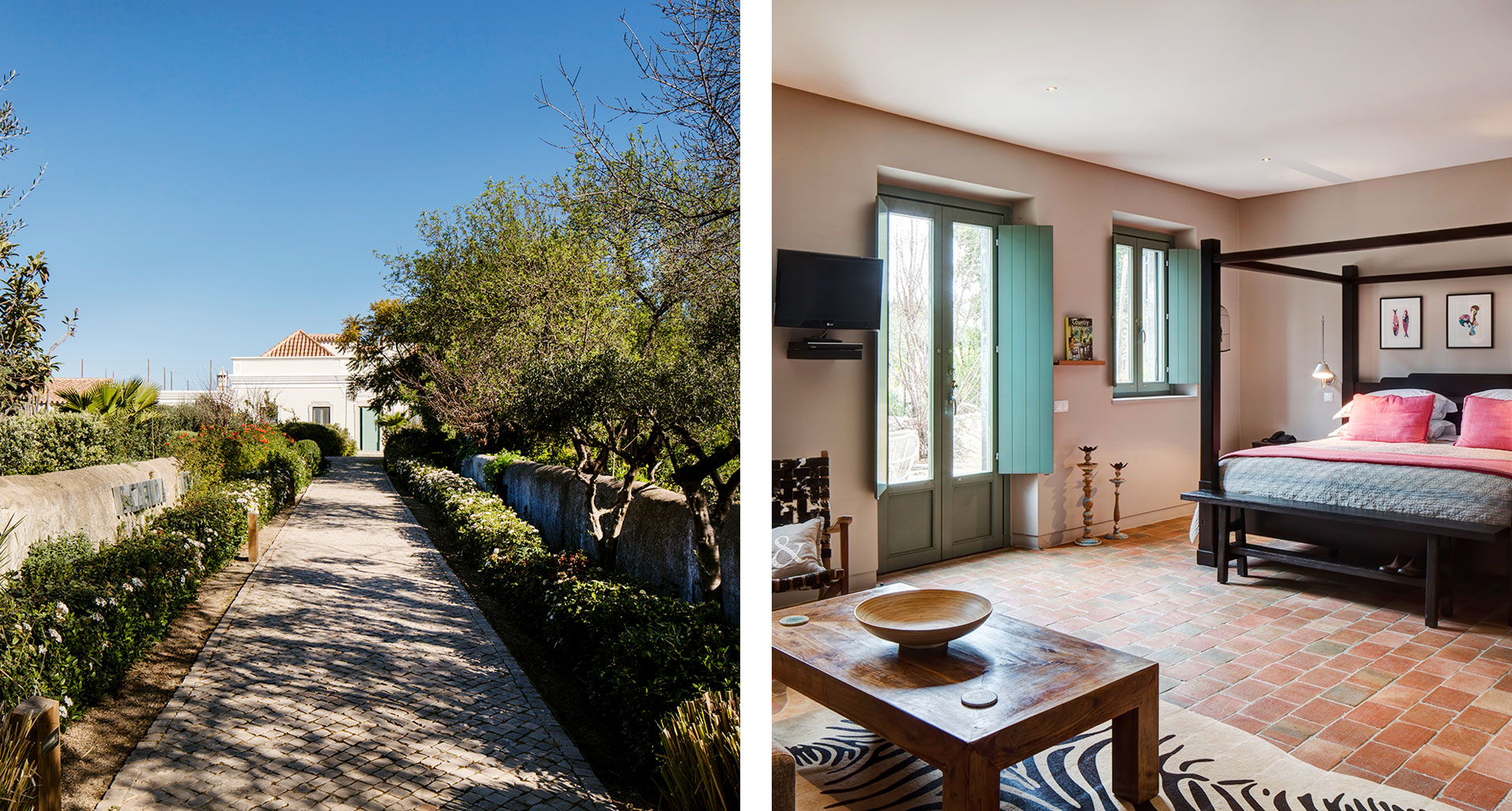 If Fazenda Nova, a 15-room hideaway in the eastern Algarve, feels more like a classic British country house than a modern Portuguese design hotel, there’s a perfectly sensible explanation: that’s exactly what its English owners intended. This lovely 19th-century house sits on an estate planted with orchards, vineyards, and vegetable gardens, all of which figure prominently in the kitchen’s cooking. 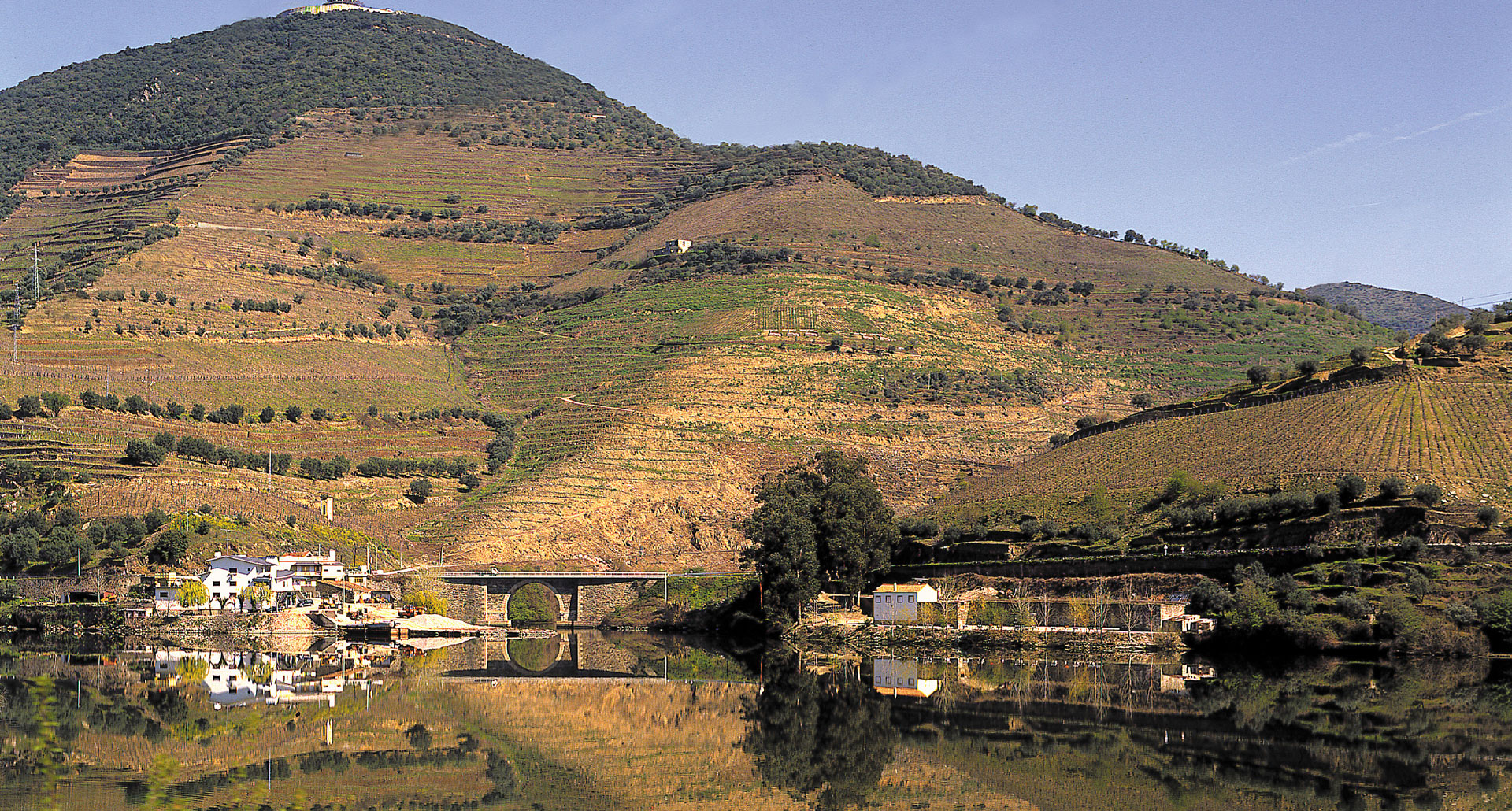 The Douro Valley of northern Portugal isn’t exactly a secret among overseas visitors — the English flocked to the city of Porto centuries ago to taste the sweet wine that made the city famous. But in recent years, seemingly every corner of Portugal has undergone a sort of hospitality renaissance, a trend that’s evident in the construction of sleek seaside properties like Douro 41, a contemporary luxury-hotel complex housing 56 rooms and 5 suites. 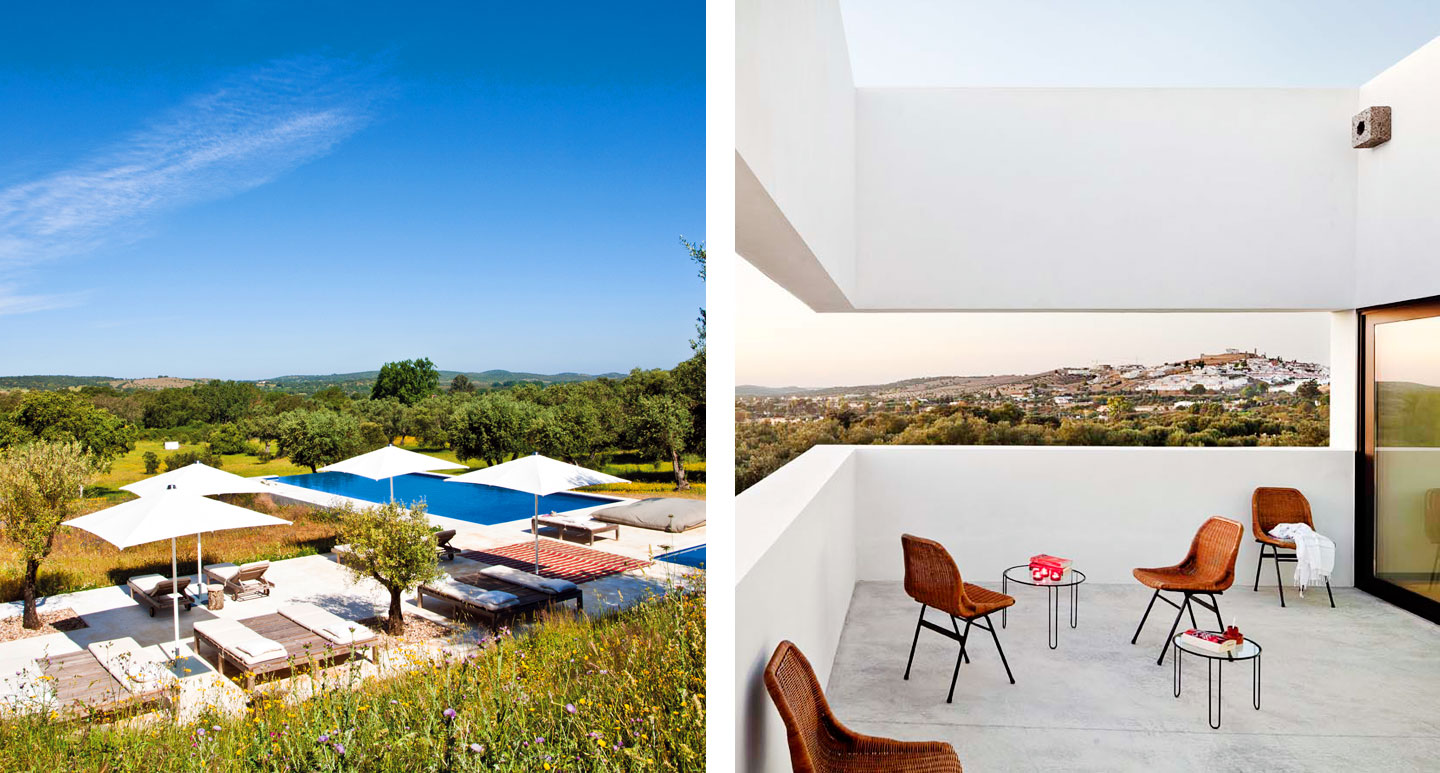 Villa Extramuros is a buzzed-about boutique hotel that’s located in Arraiolos, which is near the city of Évora, which is the capital of the province of Alentejo. If you’re still not quite sure sure which country we’re talking about — it’s Portugal — it’s a testament to just how quiet and comparatively remote the place is. And while the sculptural white villa might seem, at first, at odds with the natural landscape, there’s nothing over-the-top about this hotel. With just five guest rooms and a sleek, down-to-earth aesthetic, Villa Extramuros is a minimalist getaway surrounded by olive groves and oak forests that invite a late-afternoon wander. There’s nothing much to do here except sleep in, feast on a leisurely breakfast, catch a few rays beside the infinity pool, and maybe catch up on that book you’ve been trying to read for ages: and that’s exactly the point. 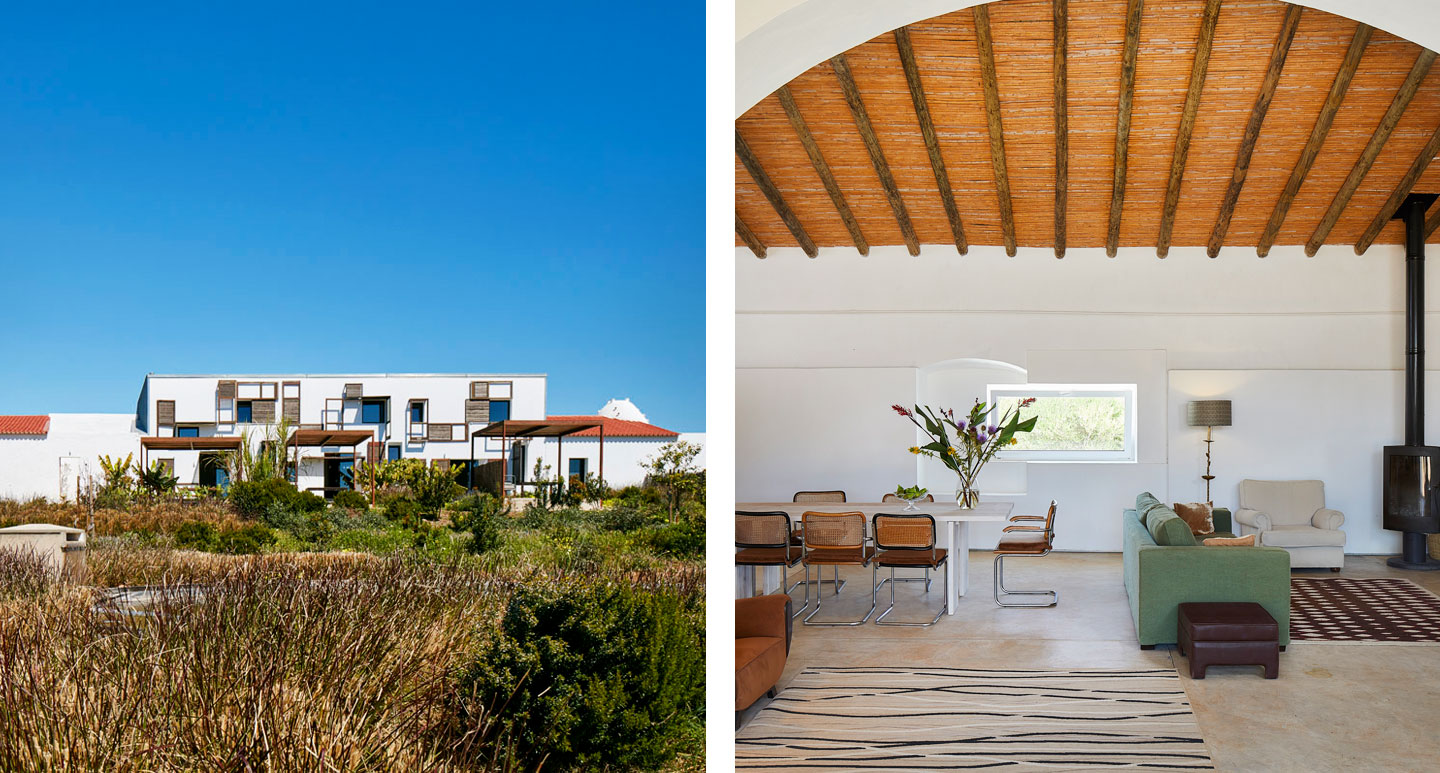 A few miles from the Spanish border, on Portugal’s southern coast, where the Atlantic edges ever closer to the Mediterranean, is the municipality of Castro Marim. It’s here that a writer/farmer and his wife have turned a working family farm (still growing olives, quince, oranges and figs) into Companhia das Culturas, a nine-room, four-apartment escape tied intimately to the land. A charming homeyness pervades throughout, with a design so subtle that it hardly feels designed at all. 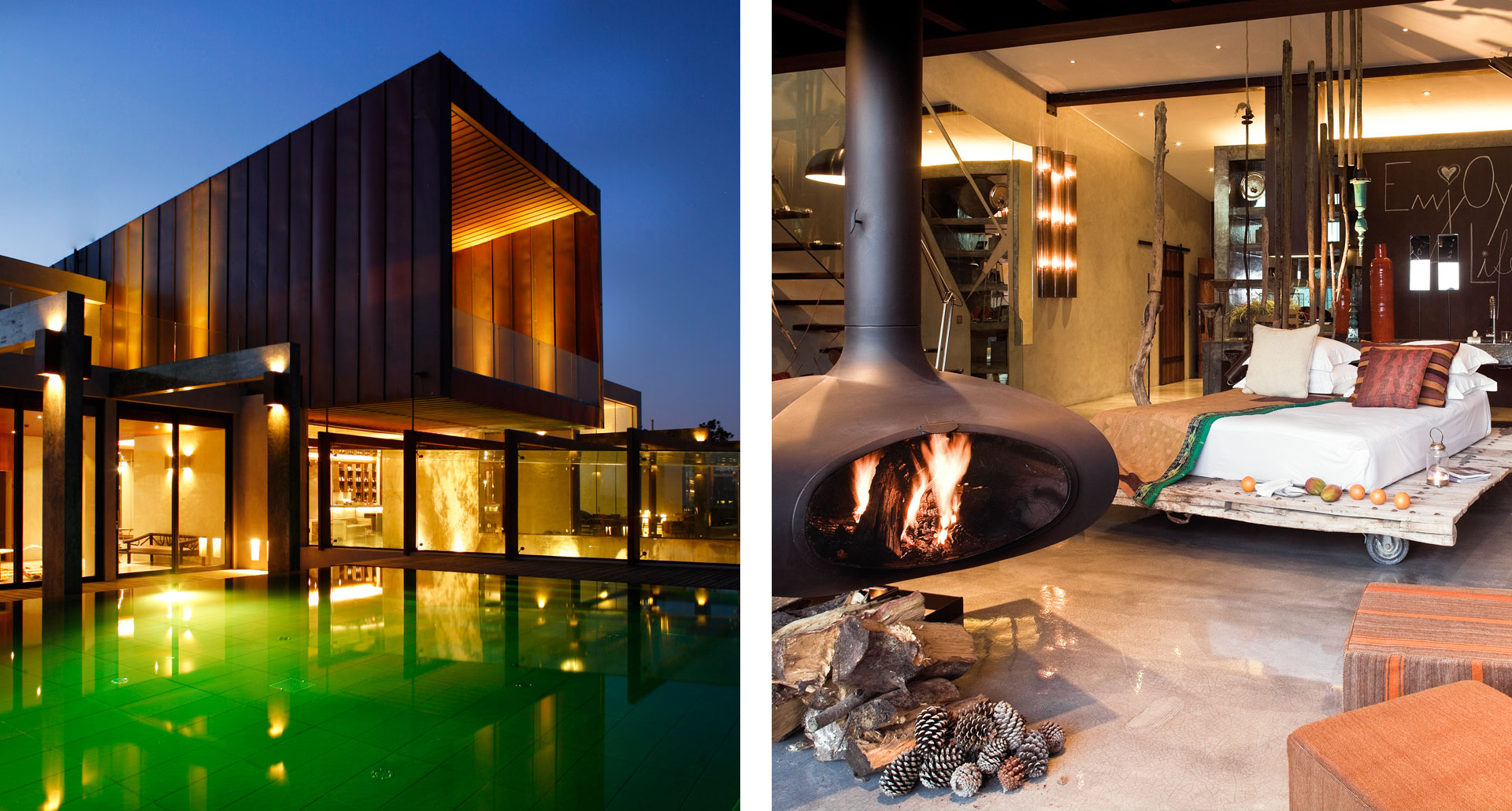 Some high-end hotels make a point of being fine places to be alone. Areias do Seixo, on the other hand, is the kind of place that hosts a nightly communal bonfire on its wild — and wildly pretty — stretch of coast to the north of Lisbon. It’s not exactly a free-for-all, however — for although the wine does flow freely, given the vast expanse of farmland and ocean and dunes that’s shared by just thirteen rooms, it’s a comfortable, low-key affair, about as private a social gathering as one can have in the company of strangers. 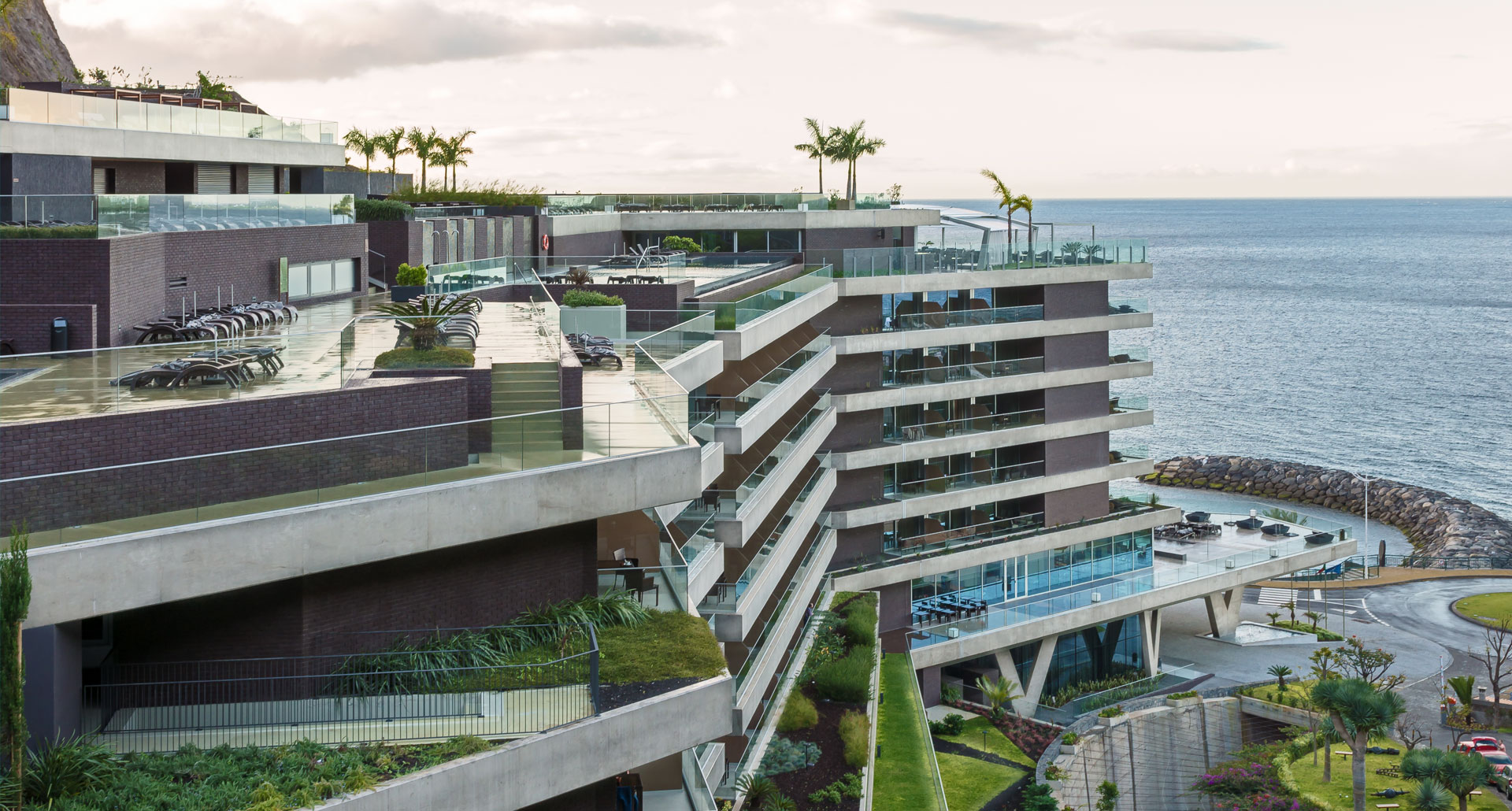 When we catch ourselves asking why the Portuguese hotel world seems to be so generously endowed with first-rate contemporary design, we forget there’s actually a totally straightforward answer: much of it is the work of designer Nini Andrade Silva, whose elegant, modernist-inspired style sets the tone for many a luxury boutique hotel on the mainland — and on the island of Madeira as well, home not only to Silva herself but to the Savoy Saccharum Hotel Resort & Spa. 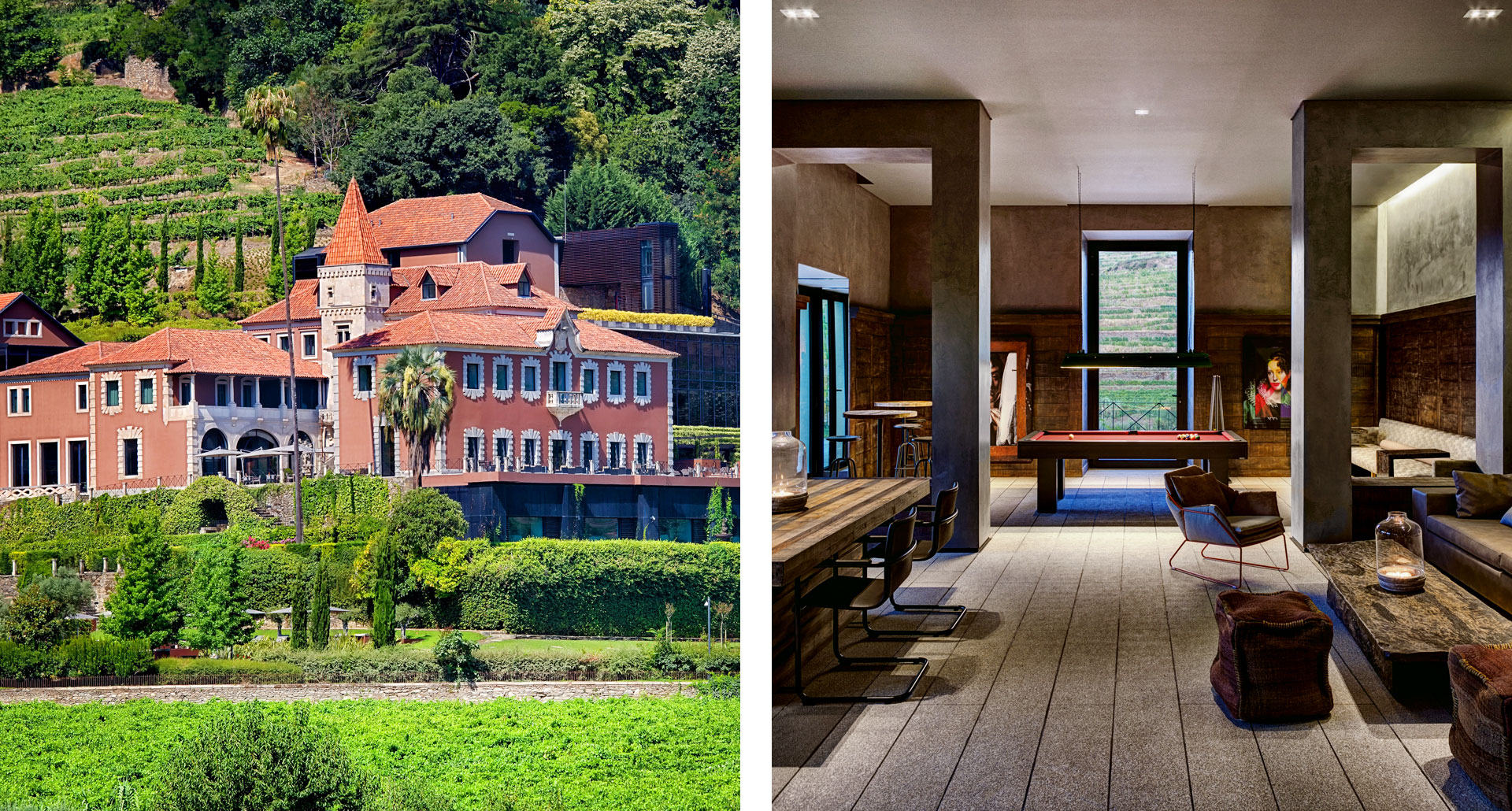 Traditionally Portugal hasn’t needed much more than a sunny climate (and maybe a bit of golf) to woo tourists by the tens of thousands. There are places, though, that go above and beyond the basic formula: Six Senses Douro Valley, named for and situated in the wine-making region in the north, is one of these. This is the modern winery spa par excellence — a painstakingly renovated, 19th-century manor house surrounded by modern villas, featuring cutting-edge interiors and a spa offering treatments based on the antioxidant properties of Douro Valley grapes. 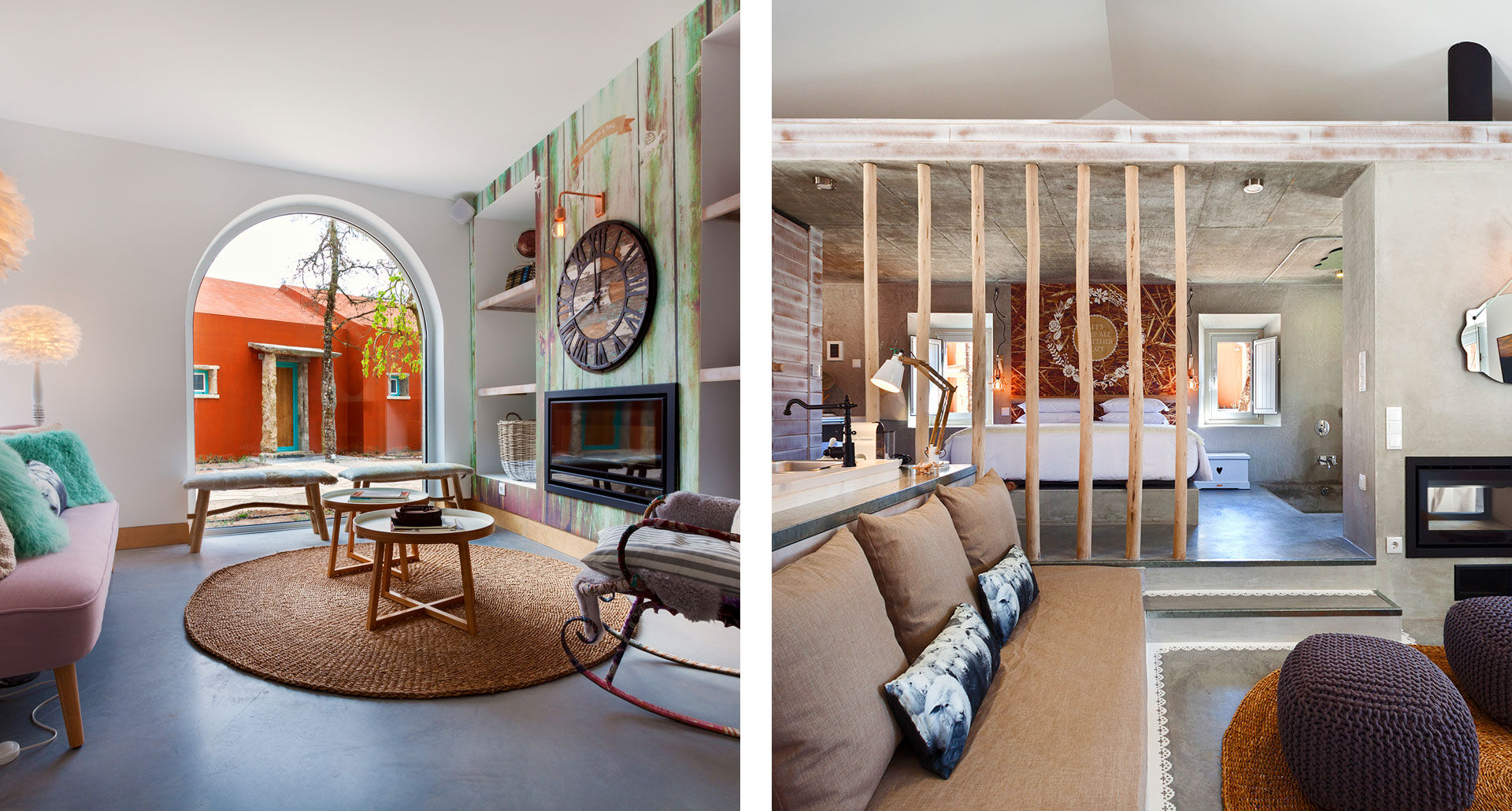 It was almost a century ago that a little town in Portugal — not even a town, just a field, south of Porto and north of Lisbon — was suddenly put on the map, at least in the Catholic world of popes and priests. It was here, in 1917, that a trio of children witnessed a series of Marian apparitions, and today, the region of Fátima remains a popular place of pilgrimage. Not that you have to receive Communion regularly to appreciate a stylish getaway like Luz Houses. But it helps if you come with an open mind and, perhaps, a mindset that’s more geared to quiet breakfasts and long walks in the woods than, say, locating the nearest outlet for your laptop. 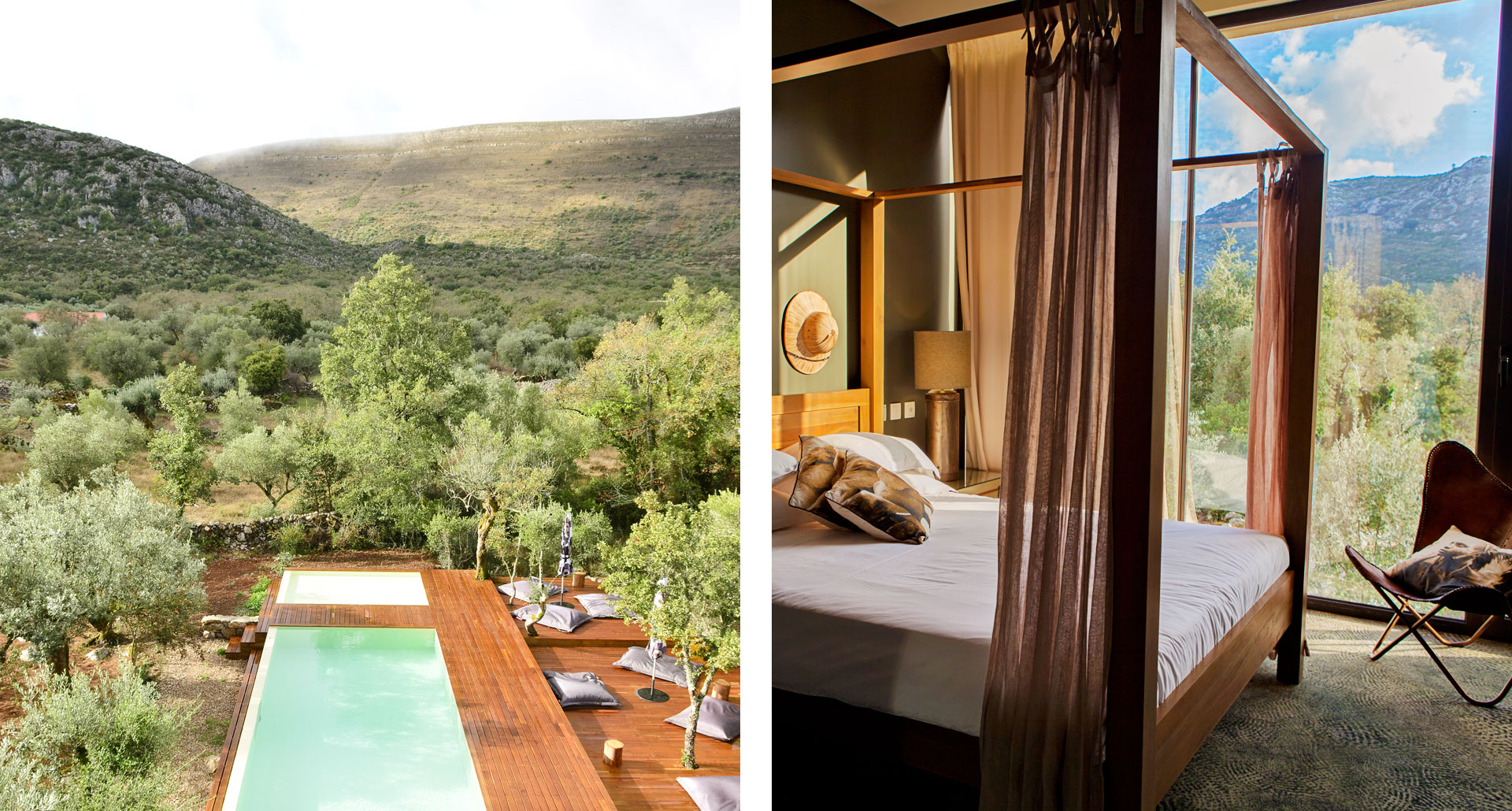 Well, there’s something to be said for a name that helpfully spells things out for you. We’d argue that nature should be first, in fact. It’s not that Parque Natural Serras de Aire e Candeeiros, where the hotel is located, is so essential: it’s not a fundamental destination on the must-see-before-you-die list. But it’s a gorgeous landscape within easy reach of a city that is on that list. And Cooking and Nature – Emotional Hotel, with its sleek concrete and glass exterior and its dozen individually decorated guest rooms, is an ideal place to hang your hat during a side adventure into this otherworldly stretch of limestone hills, shadowy grottoes and colossal underground caves. 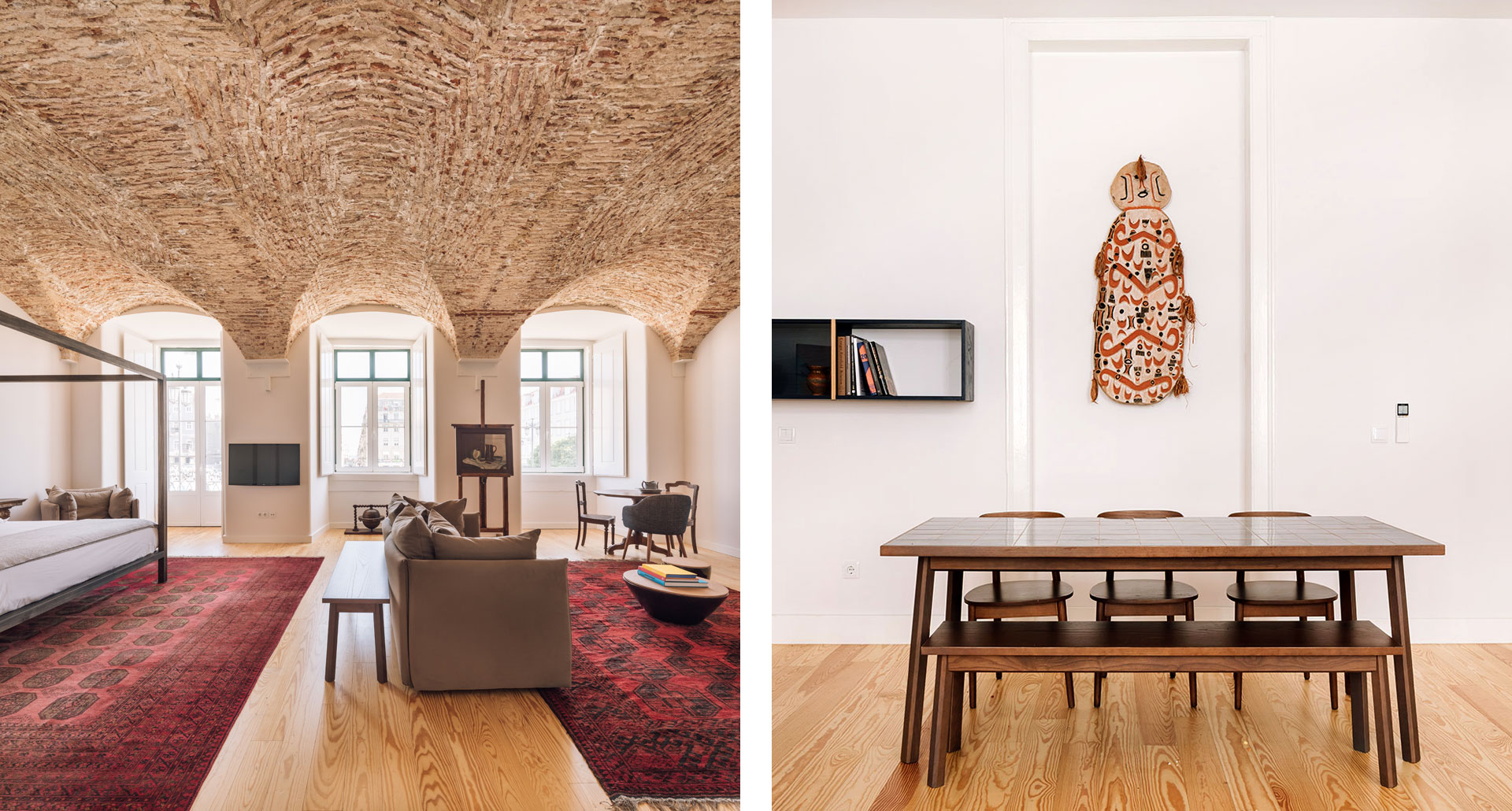 We’re cheating a bit by including Lisbon on this list, but the Visionaire Apartments are a worthy addition — they bring to the city much of what the previous hotels perfected out in the country. The Visionaire is a modern hotel that takes its stylistic inspiration from a traditional merchant’s house, sporting vaulted stone ceilings, farmhouse tables, hardwood floors, handmade craftsmanship, tapestries, tile work, and pottery, and even fully-equipped kitchens. If you can’t make it out of Lisbon but you want a taste of what’s happening with Portugal’s rural hotel revolution, this is a good place to start.

See all of our hotels in Portugal