The United States is a big country. And winter means something quite different to the residents of each of its regions. For some, it’s a chance to dive deep into the welcoming arms of colder weather and outdoor activities like skiing and snowboarding. For others, it’s a chance to escape all that noise, go south and get warm. And yet for another group, it’s a chance to (finally) find a room at desirable destinations in their off-season hibernations.

Moving from the West Coast to the East, we’re featuring a little bit of each category in the list of hotels below. The common denominator is that each property has 20 rooms or fewer. As the country still grapples with coronavirus, smaller hotels remain in-demand for the relatively low number of guests to potentially cross paths with. For now, that’s an opportunity most can agree on.

For a fun way to plan your winter escape, check out our new Take Me Away machine. Choose what you want from a destination and it’ll show you the hotels that can take you there. 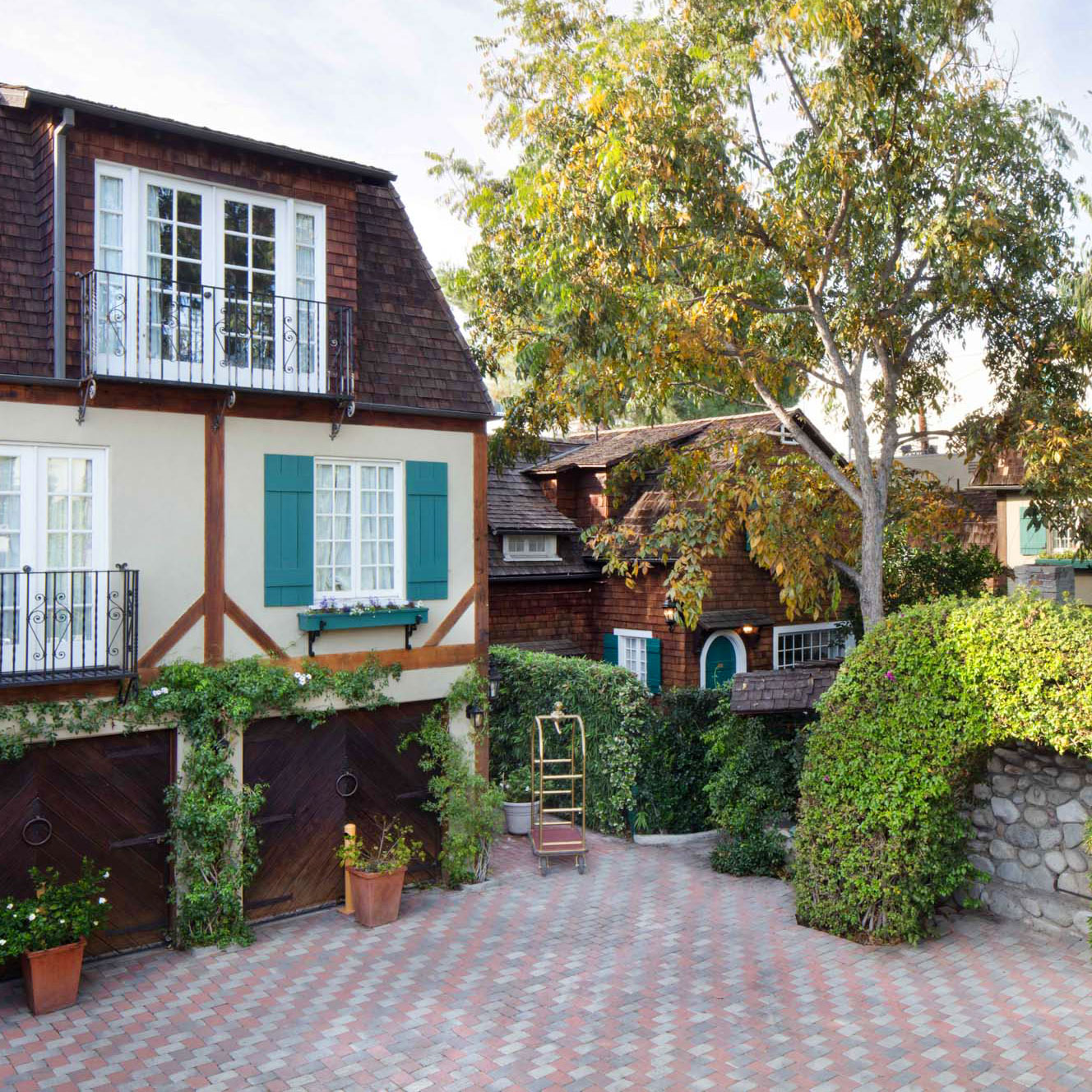 This particular corner of West Hollywood has changed a bit over the years, to say the least, but back when Charlie Chaplin owned it this jumble of English-style bungalows fit right in to the pastoral landscape. Chaplin left LA over sixty years ago, of course, and it’s a minor miracle that these houses still stand — but thanks to an enterprising hotelier, they do, in the form of the Charlie, a truly unusual boutique hotel. (We always mean that as a compliment.) 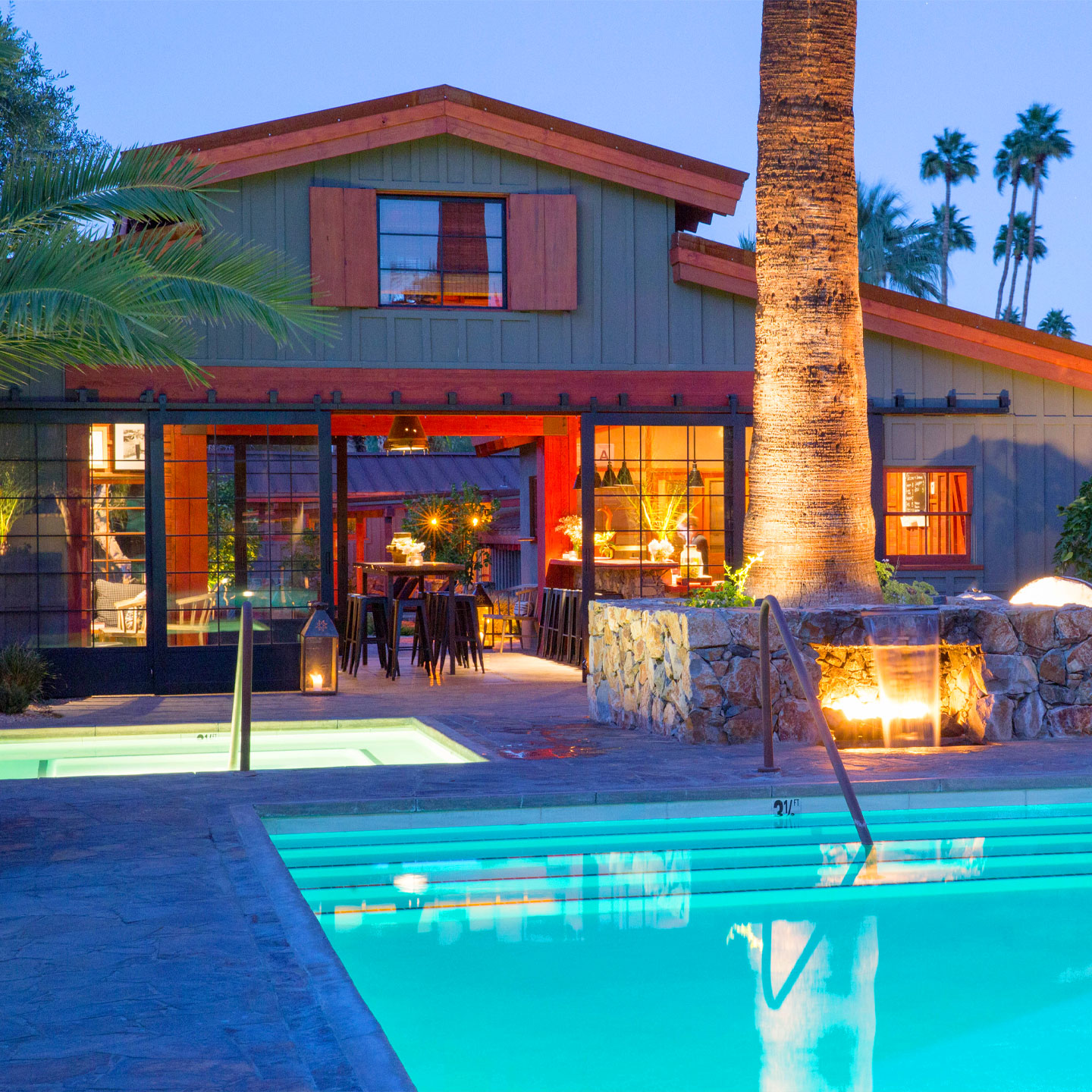 Sparrows Lodge is not aiming for the mainstream. Recycled from the Fifties and refreshed for a style-conscious clientele, this woodsy hideaway is the kind of place where people play horseshoes, swing wooden tennis rackets and read books by their private campfires. At night, the property’s original red barn opens for dinner and drinks. It’s like a dreamy hipster version of the summer camp of your childhood — complete with artisan cocktails and deep, luxurious bathtubs fashioned out of old horse troughs. 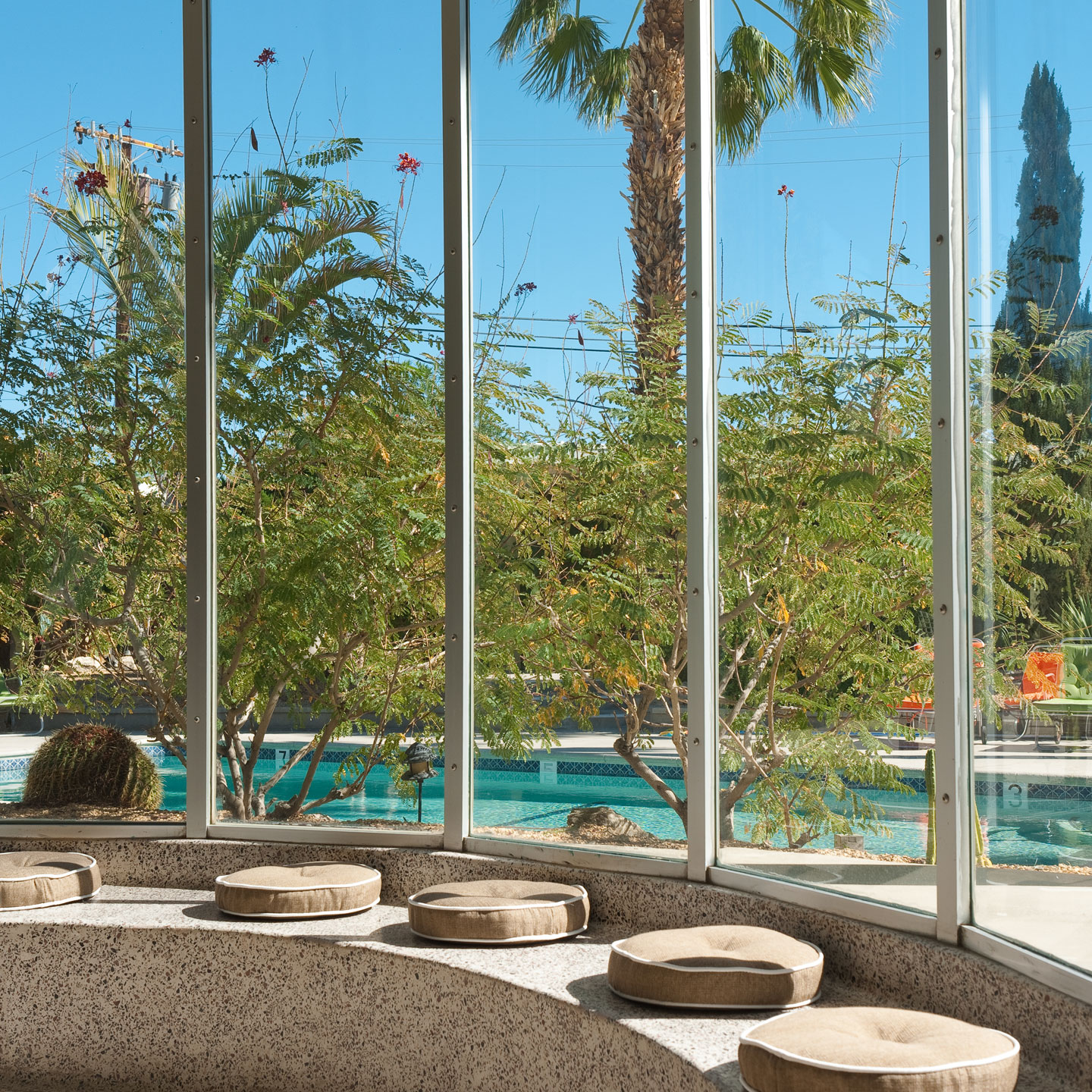 Hope Springs references two aspects of classic Californiana at once — on the one hand, the mid-century modernist roadside motel, and on the other, the natural hot springs that are the hotel’s main attraction. Nowadays it’s mostly a mecca for golfers, and mid-century architecture obsessives, but once upon a time this corner of the desert — specifically Desert Hot Springs, twenty minutes outside Palm Springs proper — was known for its geothermal waters. 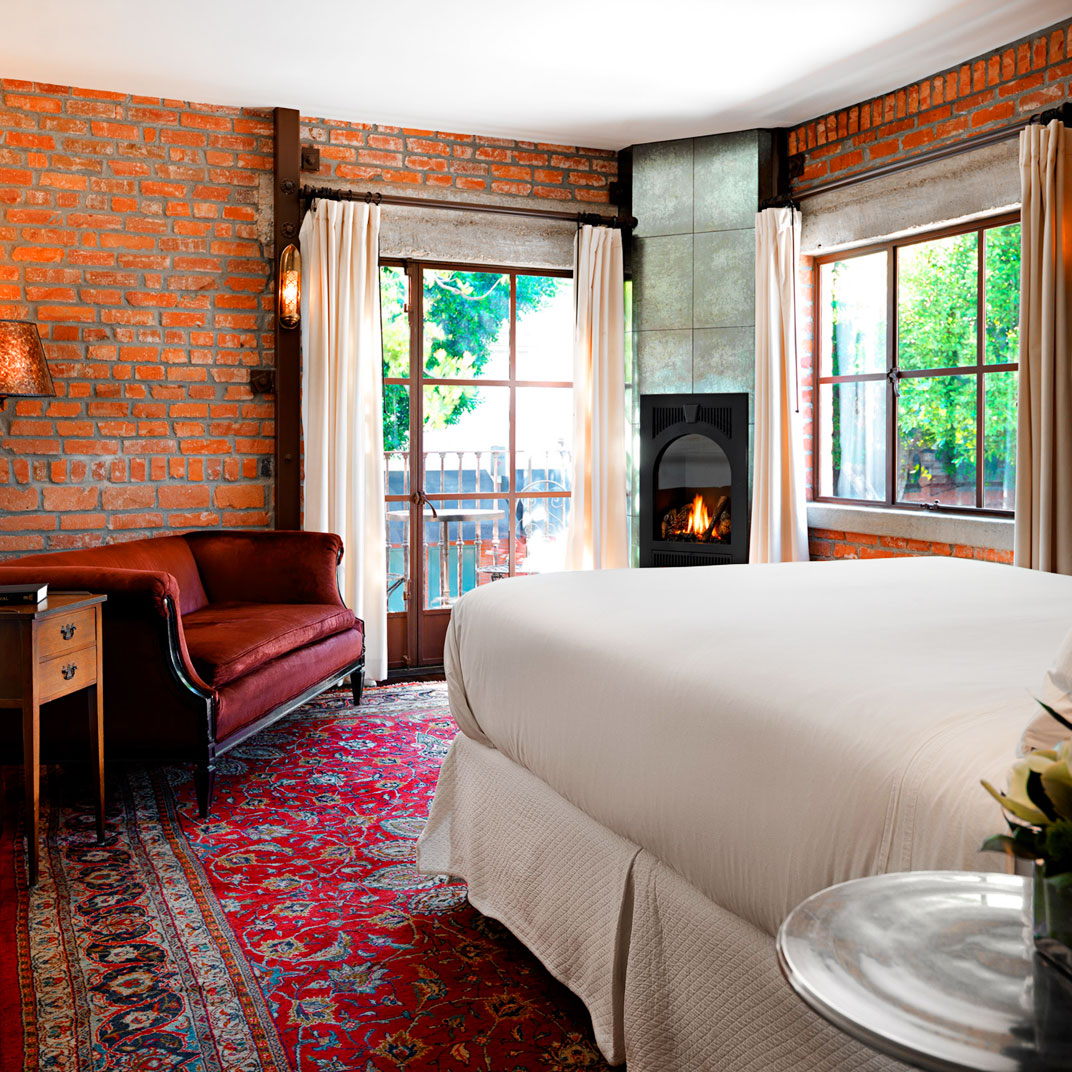 Lying, as it does, roughly midway between Los Angeles and San Francisco, San Luis Obispo is, as a destination, occasionally somewhat overlooked. This isn’t a criticism, of course — most of the best places fly a little bit under the radar, which is how they manage to remain affordable, available and/or more or less crowd-free. And you have to think a touch of out-of-the-way-ness can only help the Granada Hotel & Bistro; this is a hotel that would be jammed to the rafters every day of the week, were it in the Southland or the Bay Area. 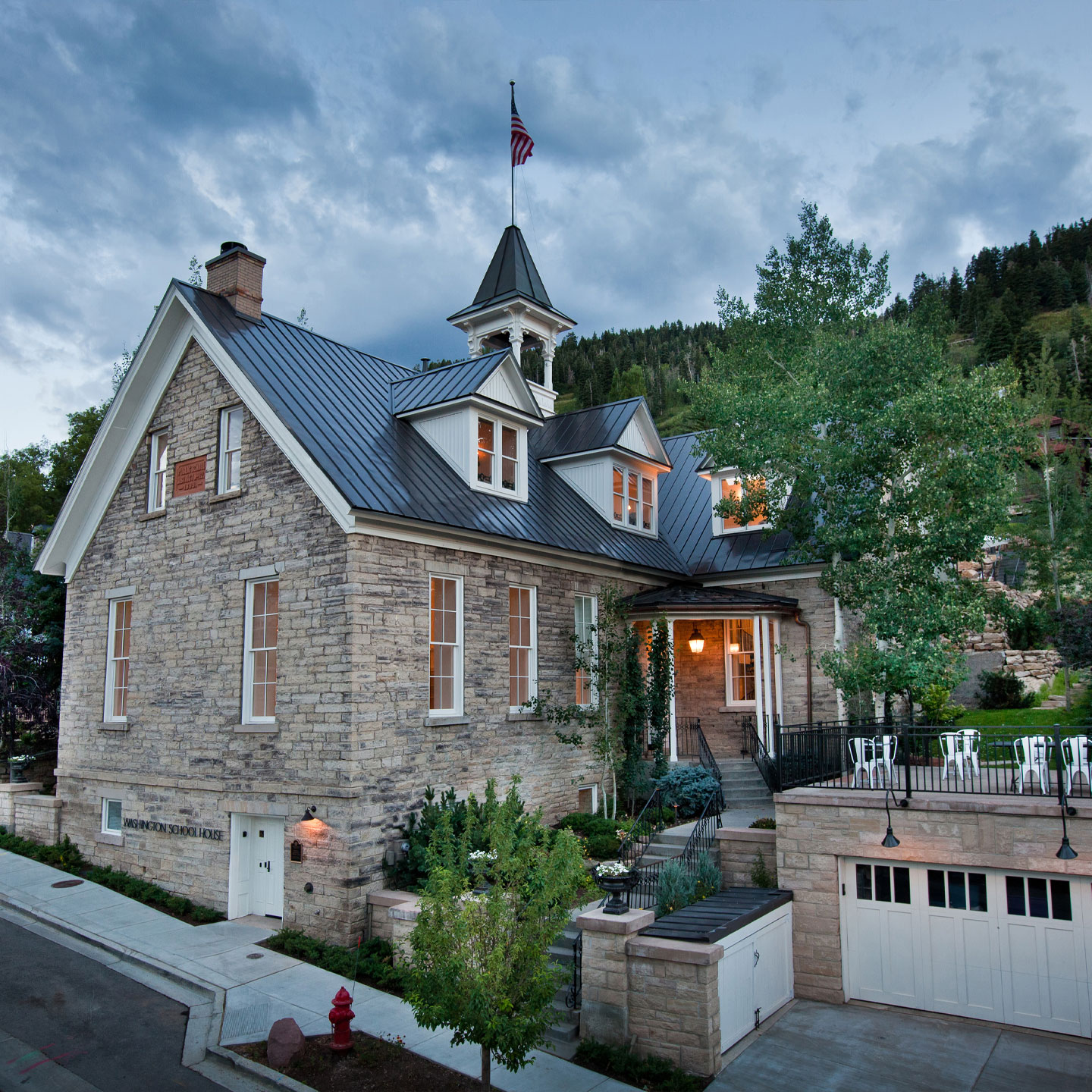 A Washington School House, the natural environment — the majesty of the mountain setting — is well-complemented by the hotel’s thoughtfully conceived built environment. Yes, it’s a 19th-century schoolhouse, but rustic cutesiness is far from the dominant tone. These twelve rooms and suites vary in style, but they’re all stylish, and all cleanly focused, so that antique elements, from aged hardwood floors to classic Europe-via-Rockies furnishings, are given their proper space against a simple white backdrop. 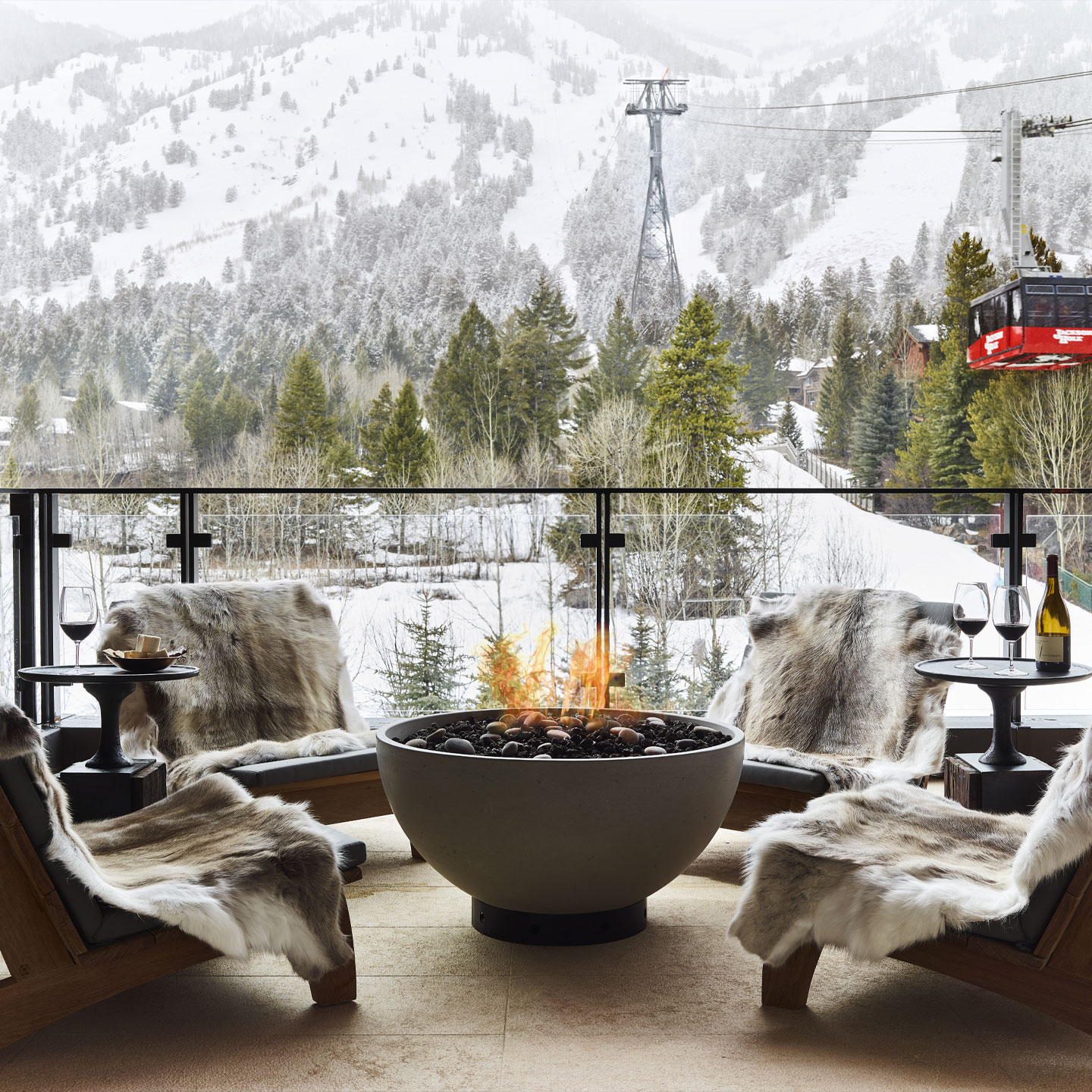 The exterior of Caldera House is just traditional enough to blend harmoniously with its Teton Village surroundings, with its peaked rooflines and its façade in stone and Douglas fir. It’s in the interiors, however, free from the prying eye of the town’s design board, that Caldera House is at its most impressive, turning the rustic textures of wood, stone, and leather into something refined, contemporary, and faultlessly stylish. 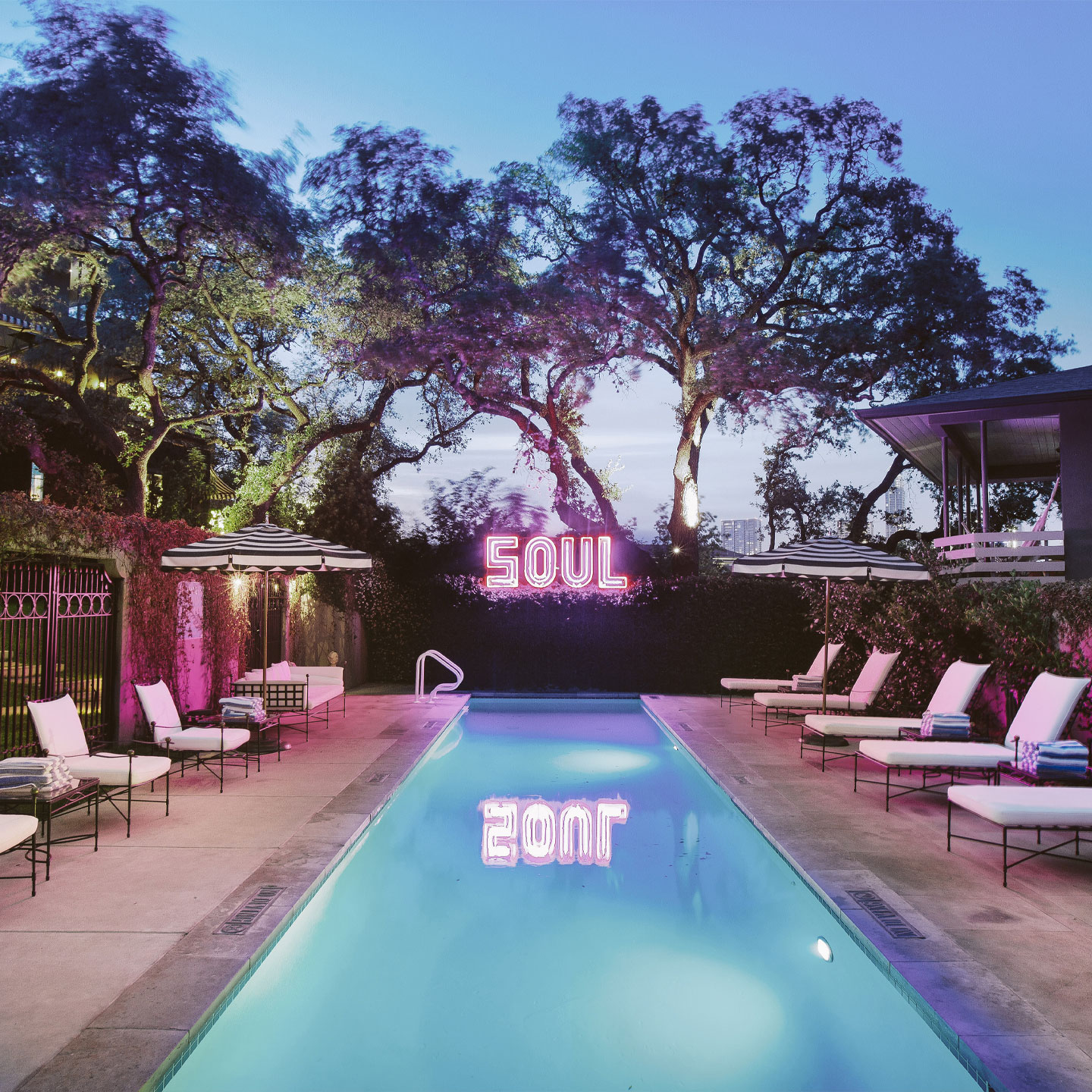 The Saint Cecilia takes off running in the direction of “luxury guest house” and never really stops. Of course Austin-style luxury includes not just those wildly expensive Hästens handmade mattresses, but an in-house vintage vinyl library as well. Put it this way: the Saint Cecilia’s blend of bold modern colors and impeccably curated antiques wouldn’t even register as upscale in Houston or Dallas; here in Austin it’s clear at a glance that this is the place to stay. 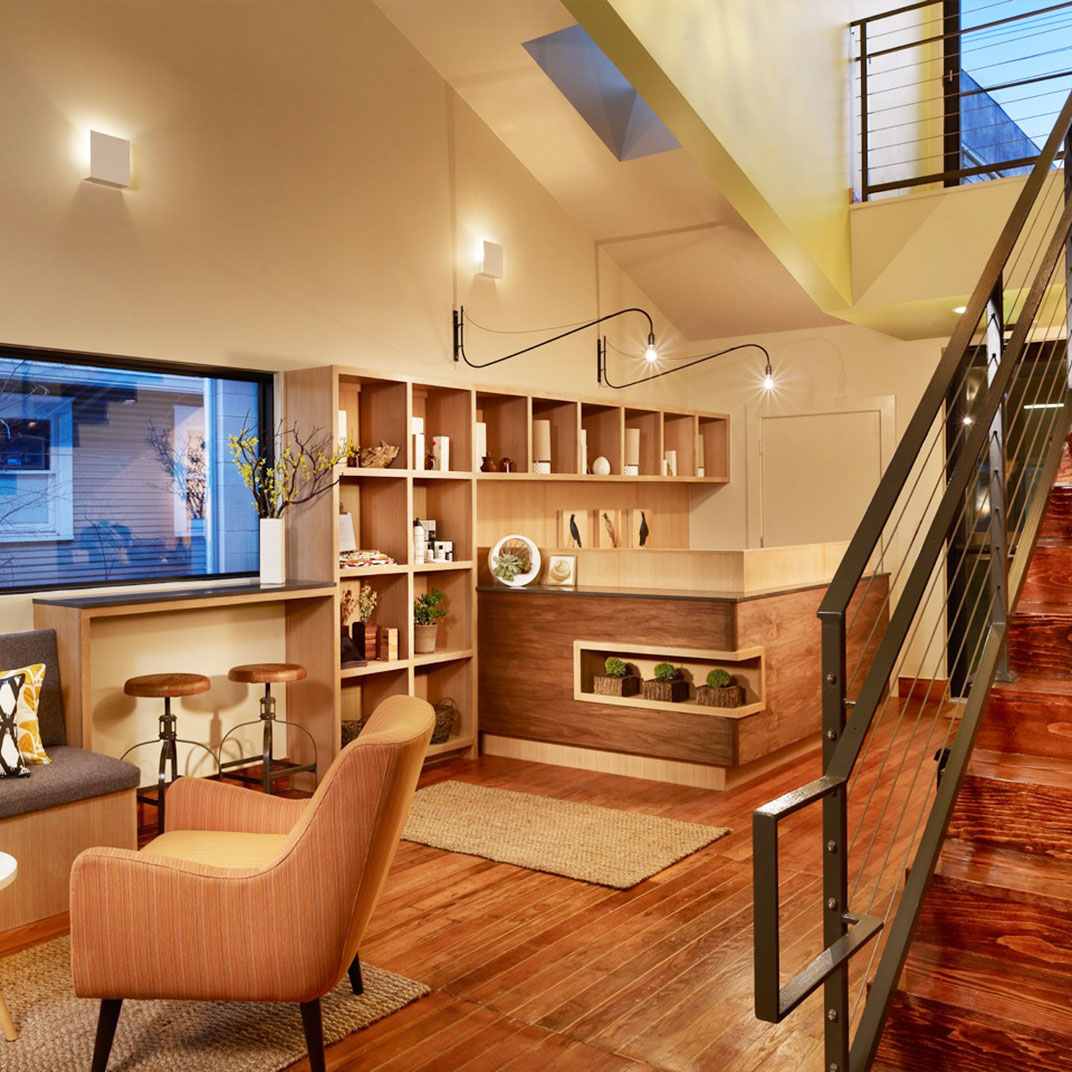 If a hotelier is going to be a little obsessive about keeping things local — hanging the work of local artists on the walls, playing local music, hiring local architects and interior designers — then it helps to be in a town with as much creative talent as Austin. Not to knock a perfectly fine state capital of the same size, but it’s hard to imagine a homegrown hotel in, say, Indianapolis finding its way toward mid-century Danish armchairs or a warmly lit polished-concrete courtyard — which is just what you get at East Austin’s seven-room Heywood Hotel. 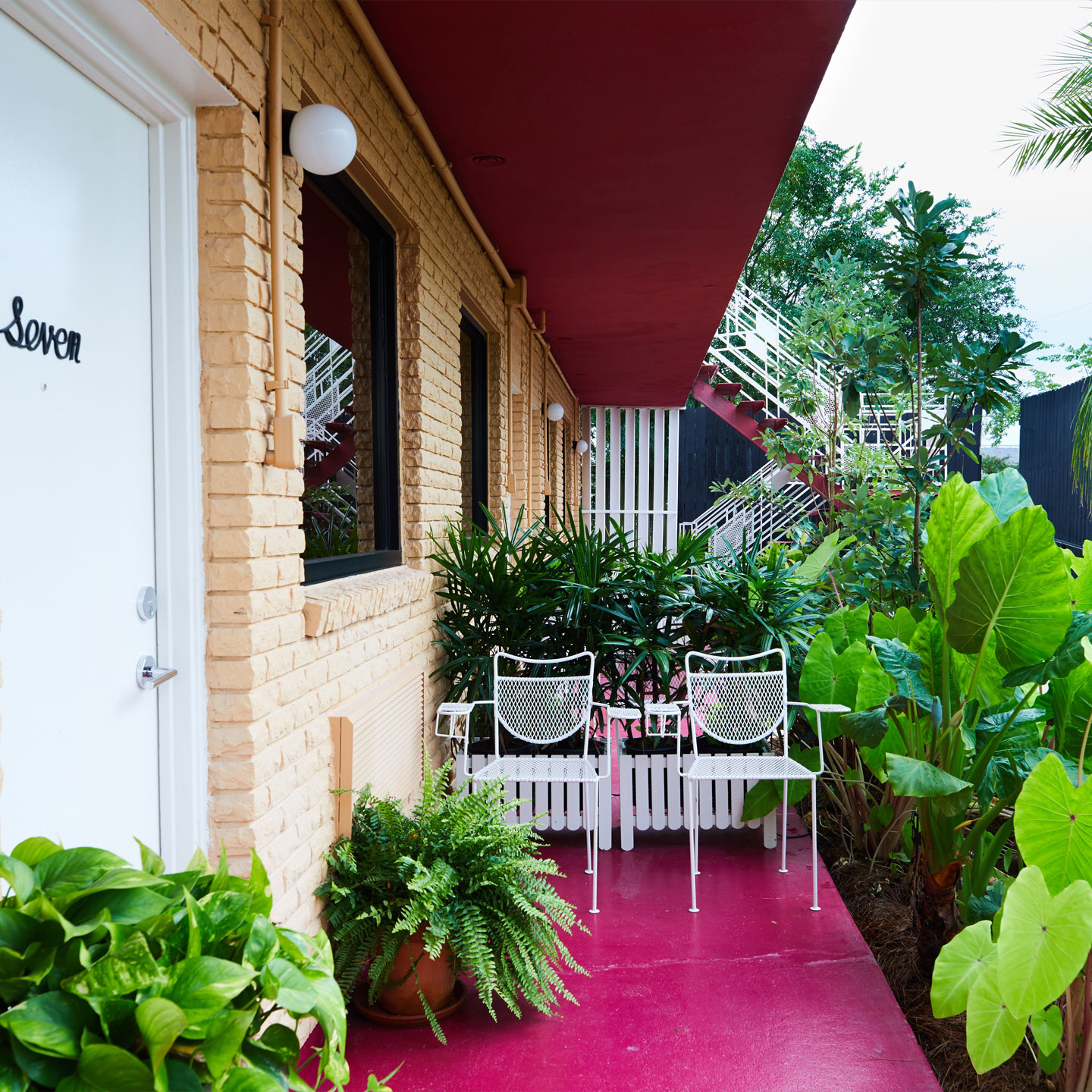 The vibe at the Drifter is like nothing else you’ve seen in New Orleans. It’s a renovated mid-century motel, for one thing, the sort of low-slung two-story modernist building we’ve seen rehabilitated to great effect in towns like Austin. And while youth-oriented boutique hotels are not unheard of in this town, the Drifter goes one further: with its rotating selection of food trucks, its well-chosen craft beers, its third-wave coffee, and its charmingly hedonistic courtyard pool, it’s tailor-made for young travelers with more taste than money. 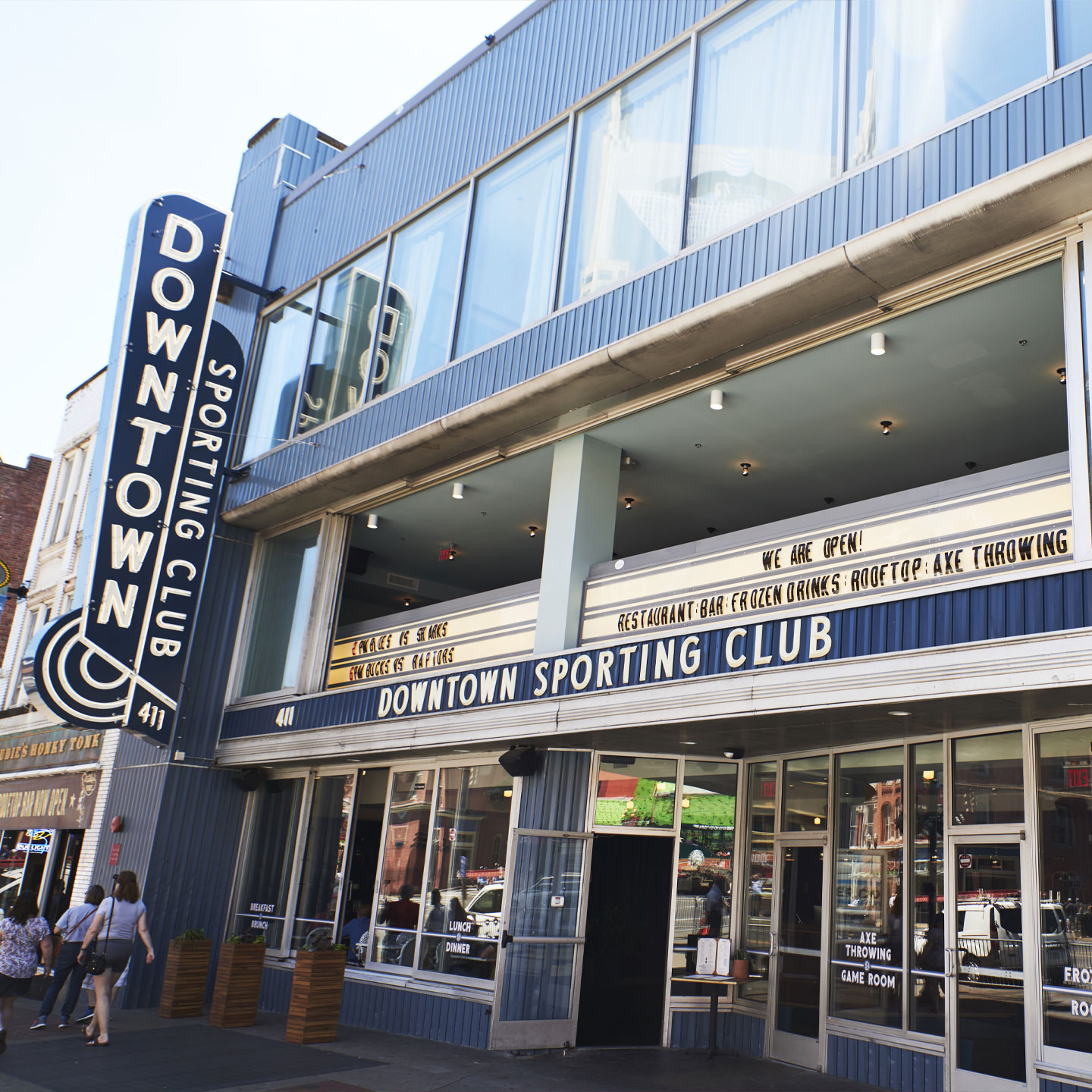 The most important thing for a traveler to know about Nashville is that it’s easily one of the two or three most fun cities in America — especially its downtown honky-tonk district, so called because of the raucous country-music bars that line its streets. In fact, it turned out to be slightly too much fun for Benjamin and Max Goldberg, who closed their own honky-tonk, Paradise Park, at the height of its popularity, and turned it into something just a little more low-key: Downtown Sporting Club, a boutique hotel that’s a touch quieter than its neighbors — though hardly less entertaining. 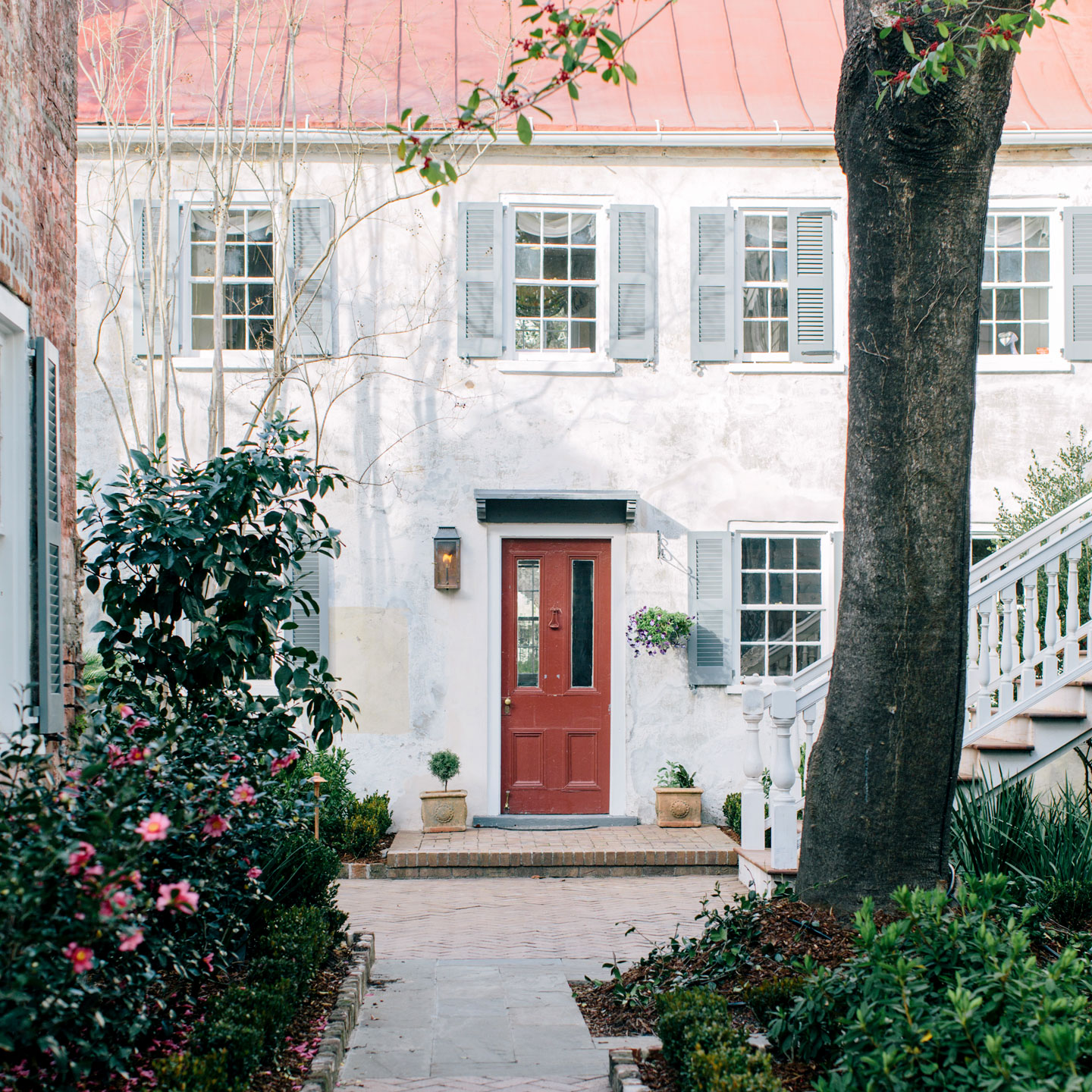 Zero George has the whimsical distinction of being located at 0 George Street in Charleston, and while the address seems like the kind of prank that would result in guests arriving to find an empty lot, we can assure you that this hotel is quite tangible — not to mention historic. Located in the Ansonborough district, where the oak trees are as stately as the buildings, this eighteen-room boutique comprises three restored 1804 residences and two carriage houses, all of which are connected by a palmetto-shaded courtyard. 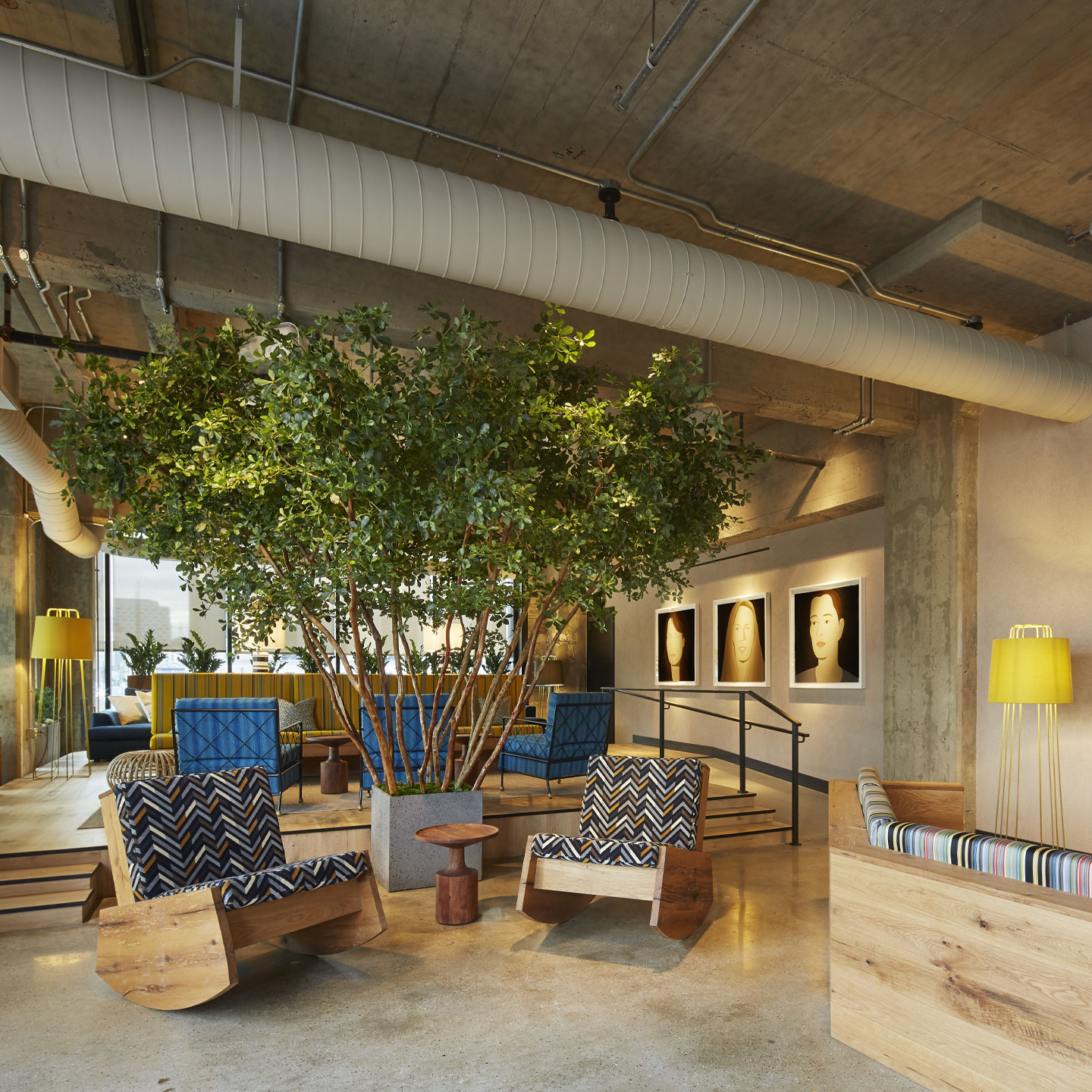 The Fitler Club is the first of its kind in Philly, but it’s a model that’s familiar in cities like New York and London: a modern version of the old multi-purpose members’ club, with co-working and events spaces, a first-rate gym and spa, a top-flight restaurant and bar scene, and stylish bedrooms for overnight guests — available not just to the club’s carefully selected members, but to nightly guests as well. Which is why we’re here. 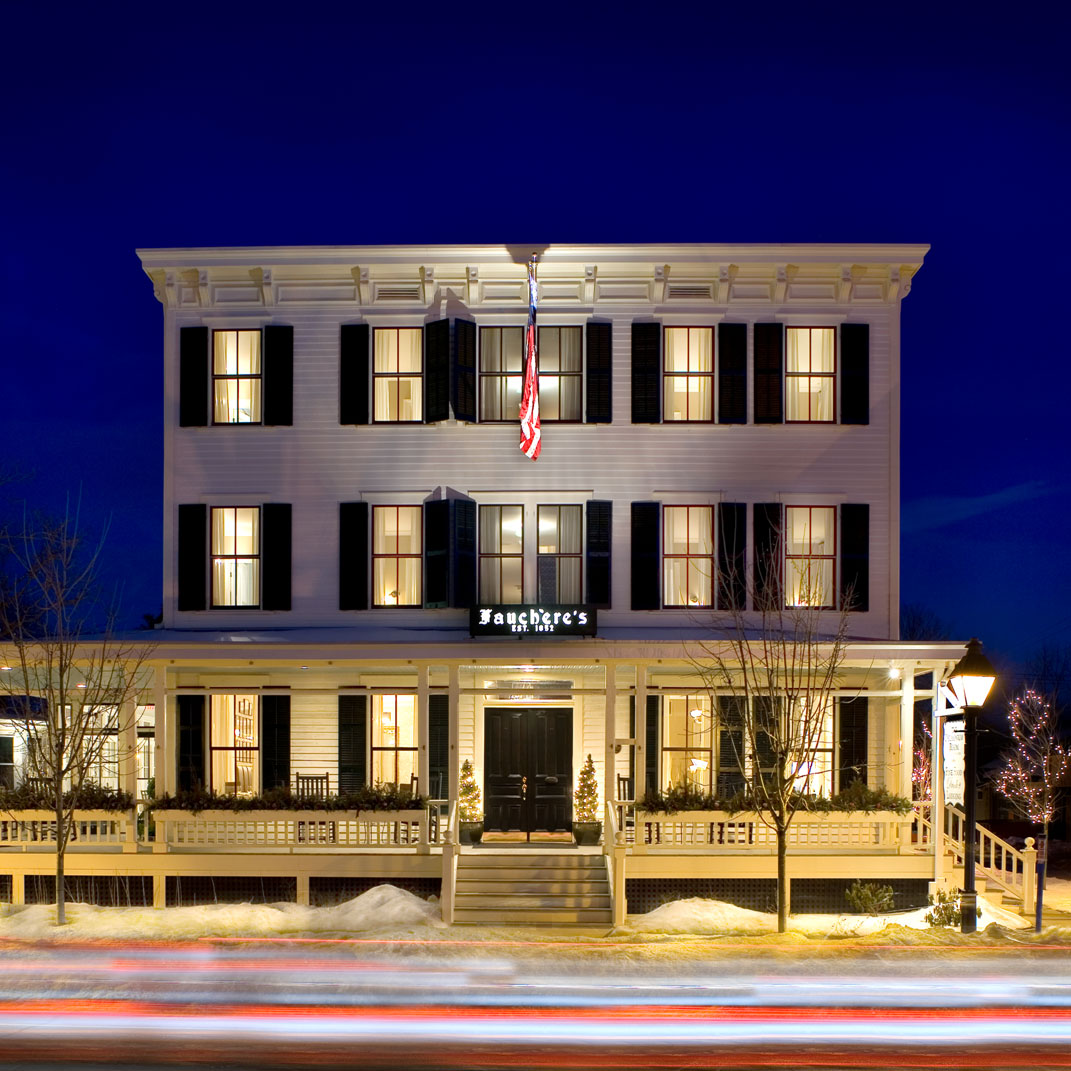 It’s often said that Pennsylvania is a microcosm of all of America — one big city on each end, and three hundred miles of farms, mountains and small towns in between. To look at the exterior of the Hotel Fauchère, in Milford, which looks straight out of American Gothic, you’d think you’d found the Platonic form of the rustic Pennsylvania farmhouse. But venture in and you’ll find a boutique hotel that’s a lot more contemporary and cosmopolitan than you’d expect, defying any concept of rural America as a somehow backwards “flyover country.” 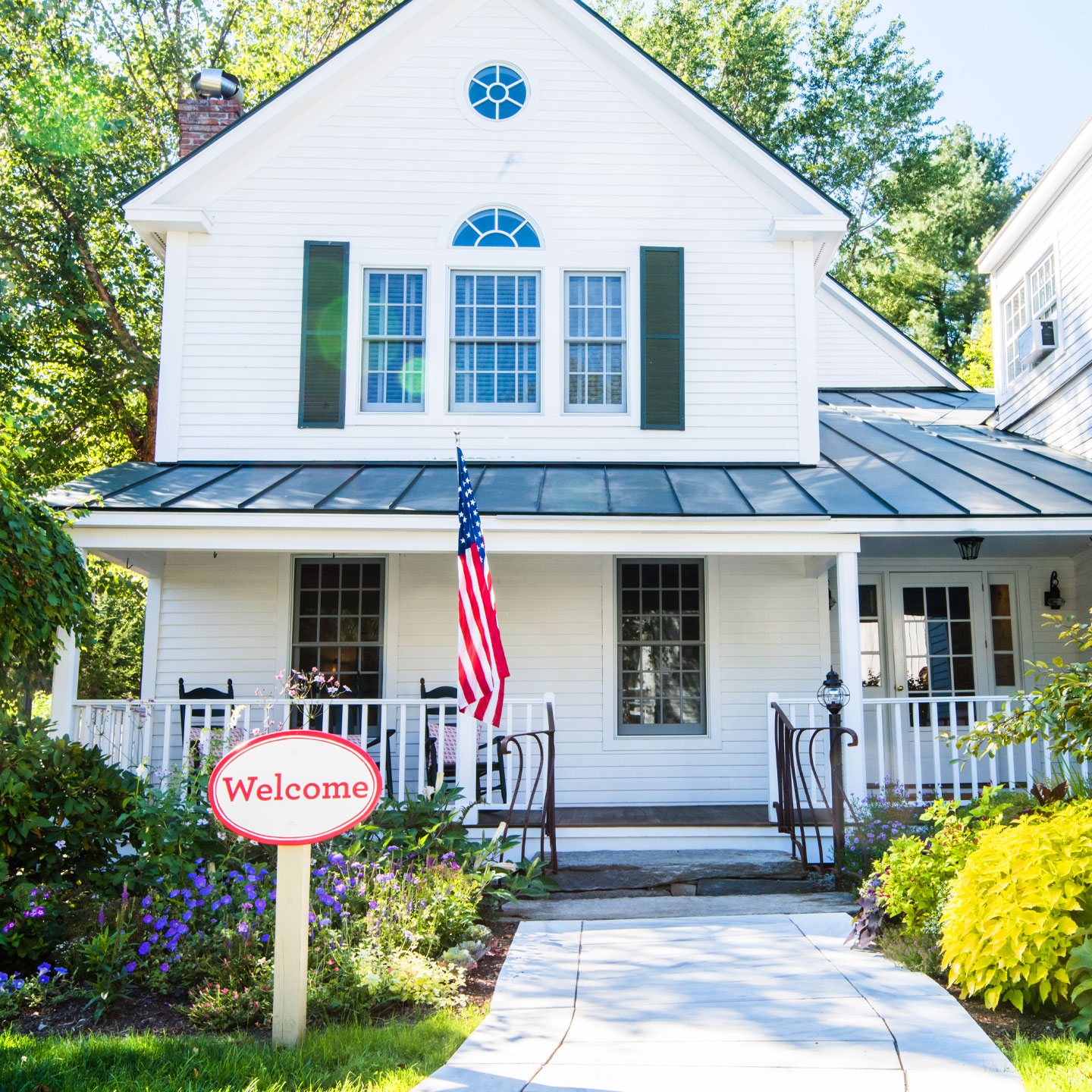 When it opened in 1965, the Four Columns Inn was arguably the first farm-to-table restaurant in the United States. The economist John Kenneth Galbraith was a regular, and luminaries like Sting and Mick Jagger passed through the inn’s guest rooms. But all good things come to an end; Four Columns was sold, and sold again, and eventually closed. Naturally, that wasn’t the end of the story, or you wouldn’t be here reading this. The Four Columns Inn is back in business, and after a thorough renovation, it’s returned to its roots. 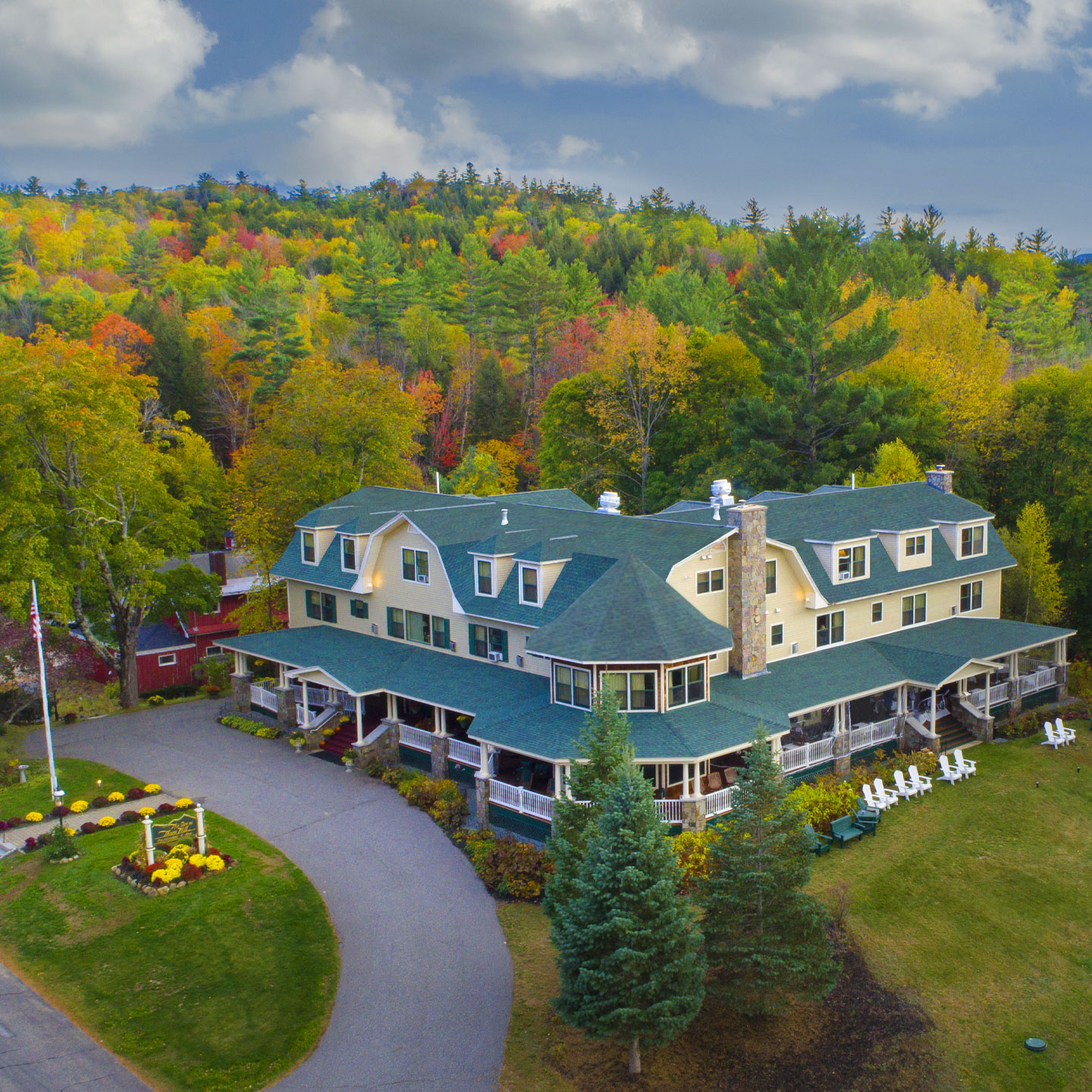 The Inn at Thorn Hill, a luxury hotel and spa in the woods of northern New Hampshire, is nothing if not relaxing. Each of the suites and rooms of the main building feature two-person whirlpool bathtubs and gas fireplaces. Guests in need of more space and privacy may also choose from a pair of charming independent cottages, while a larger group may prefer the historic carriage house. 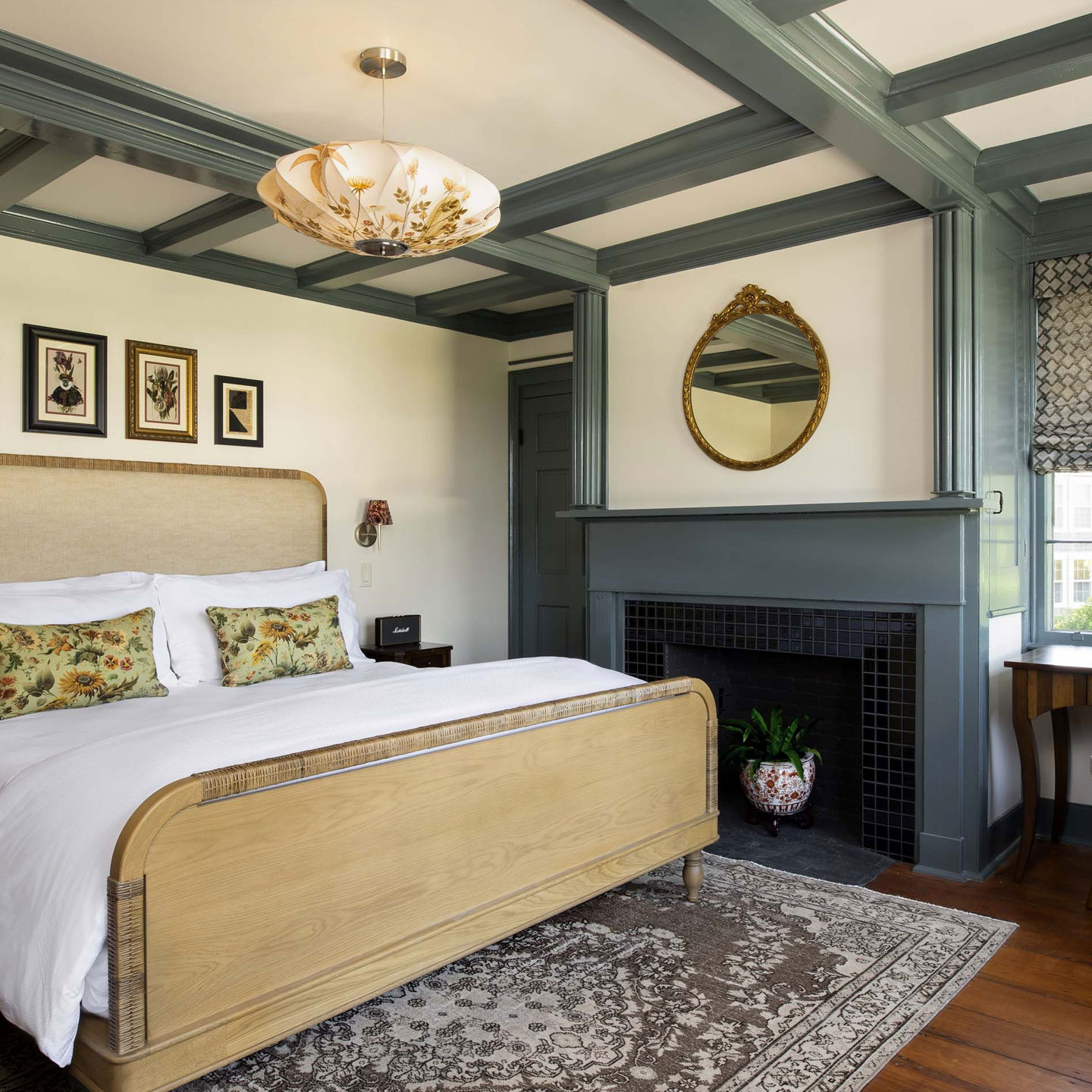 It may seem odd to follow up three Miami-area boutique hotels with a restoration of the oldest continually operating hotel in Nantucket, but what the Life House hotels share is less a copy-paste stylistic identity and more a conceptual approach — one that prizes authenticity and fidelity to the uniqueness of the setting. This old sea captain’s house became an inn in the 1830s, and while it’s been thoroughly redesigned — and functionally been brought up to 21st-century luxury-boutique standards — it’s full of details that suggest a long and eclectic history.

Kennebunkport may be most widely known as a summertime haunt for the likes of the Bush dynasty, but the reasons it became a presidential getaway are good reasons for just about anyone to visit: the town itself is a typically welcoming New England seaport, with all the pleasures and perks of a small maritime village. In short, it’s a healthy environment for a top-shelf bed-and-breakfast like the Captain Fairfield Inn. Housed in a renovated Federal mansion dating back to 1813, this hotel is situated on a quiet tree-lined street within easy walking distance of galleries and antique shops.