Our Staying Small series shines a light on hotels with 20 rooms or fewer — the kind of places you might like to stay if the world were navigating through the wake of a pandemic and you wanted to cross paths with as few other guests as possible.

For this fifth edition we look to Spain, the land of tapas, where small hotels throughout the country combine to create a vision of hospitality that’s notable for its clear-eyed focus and lack of pretension. You’ll find in the hotels below little desire to be all things to all people. Instead, they each have the confidence to let the subtleties of the land, the cuisine, and the culture speak for themselves. As usual, this is just a sampling of the modestly sized hotels one can find. If there are others in Spain you’d like to commend, please shout them out in the comments below.

If you have questions about hotel availability or reopening dates, contact our Travel Specialists. To learn how hotels have prepared themselves to welcome back guests, read about the Tablet Recovery Pledge. 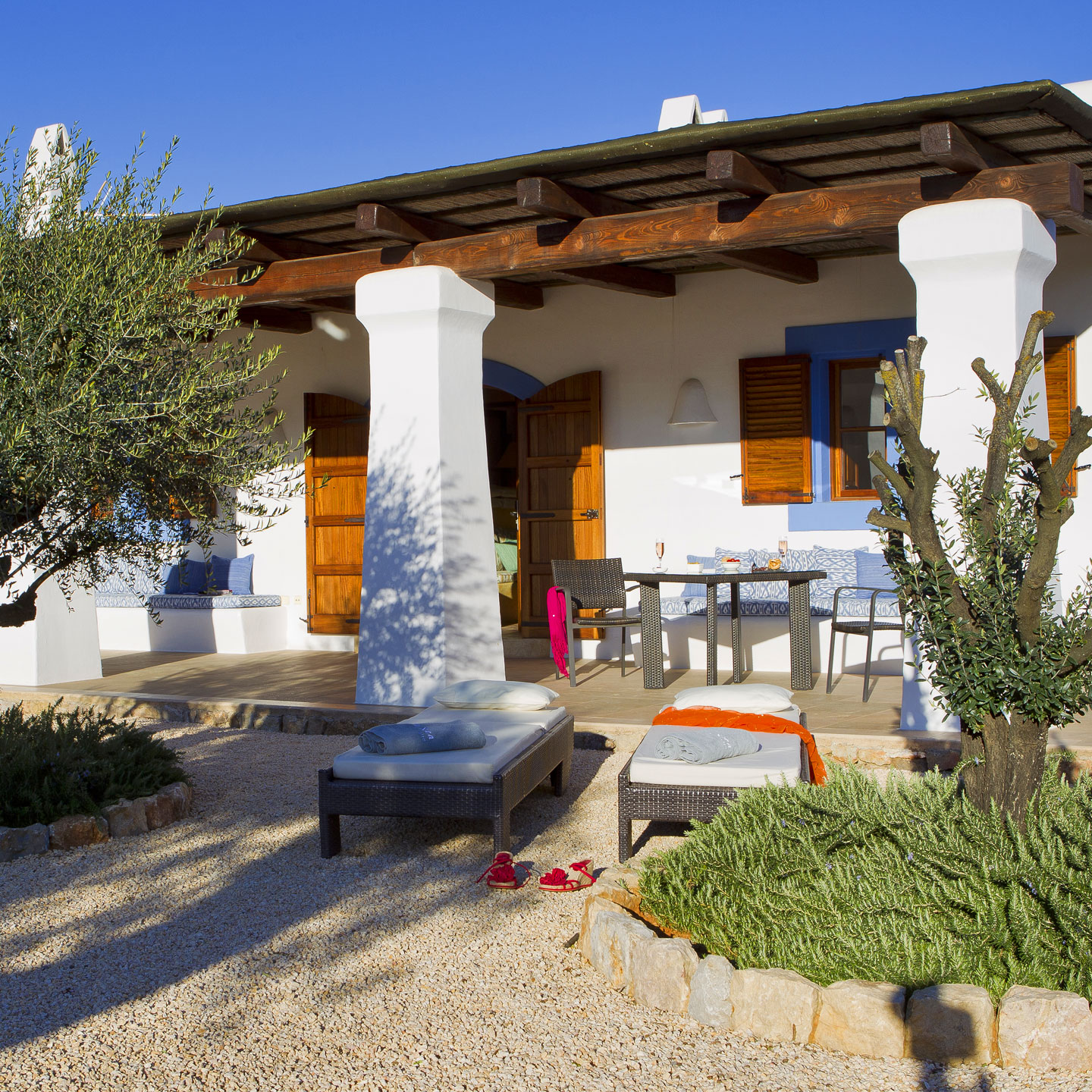 Ibiza got its start as a world-famous party town when the first major nightclub, Amnesia, opened inside a former farmhouse on the road between two villages. It’s been Mecca for European club kids since the seventies. But before that, it felt a lot like any other lovely island in the Mediterranean — and vast sections of it still do. Ca Na Xica, a boutique hotel set slightly inland in a peaceful olive grove, captures the leisurely charm that drew sophisticated travelers to the place before the club wave. 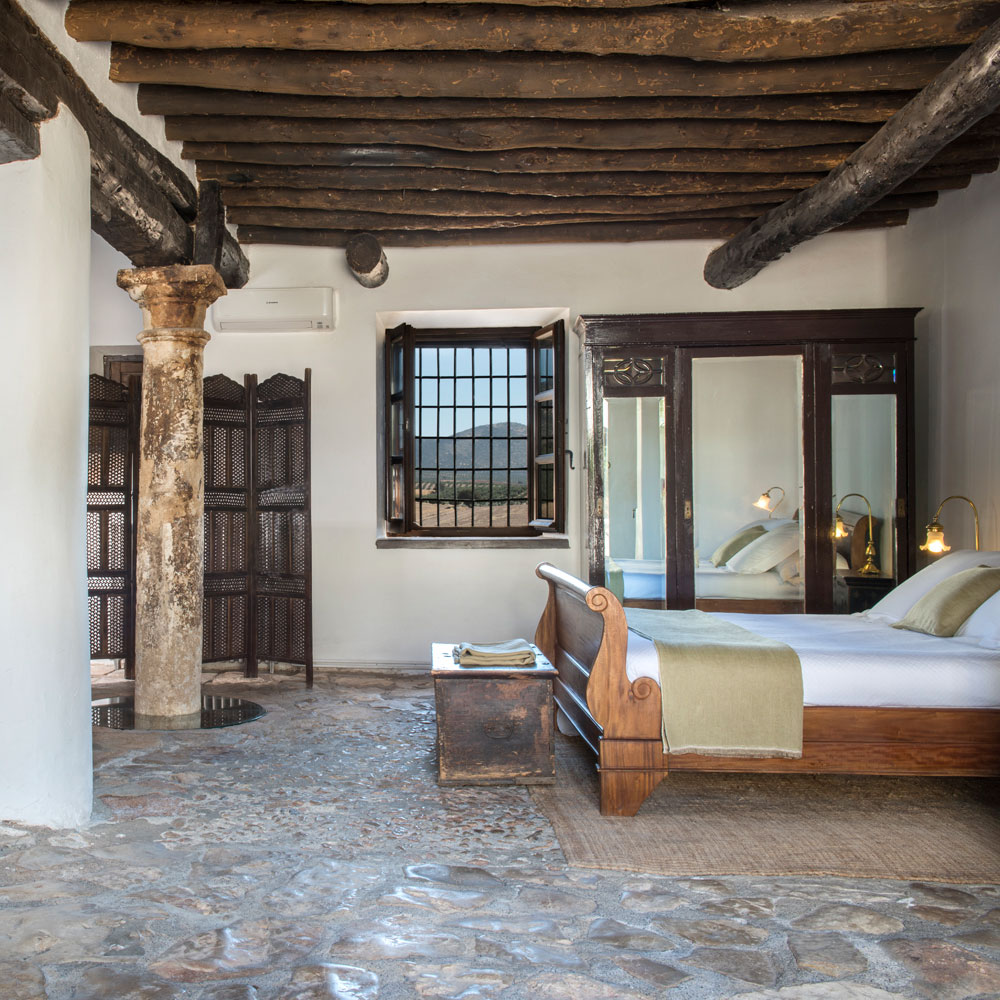 The idea of the country house hotel might not be as familiar in Spain as it is in England or France, but Cortijo del Marqués is proof that there’s nothing preventing them from operating at the highest level. A half an hour outside of Granada, this Andalusian country manor offers an escape that’s quiet, surrounded by olive groves, and full of ancient charm thanks to its beautifully preserved stone architecture. It’s been kept up to date, but not quite redesigned, and while its comforts have been modernized, its atmosphere hasn’t. 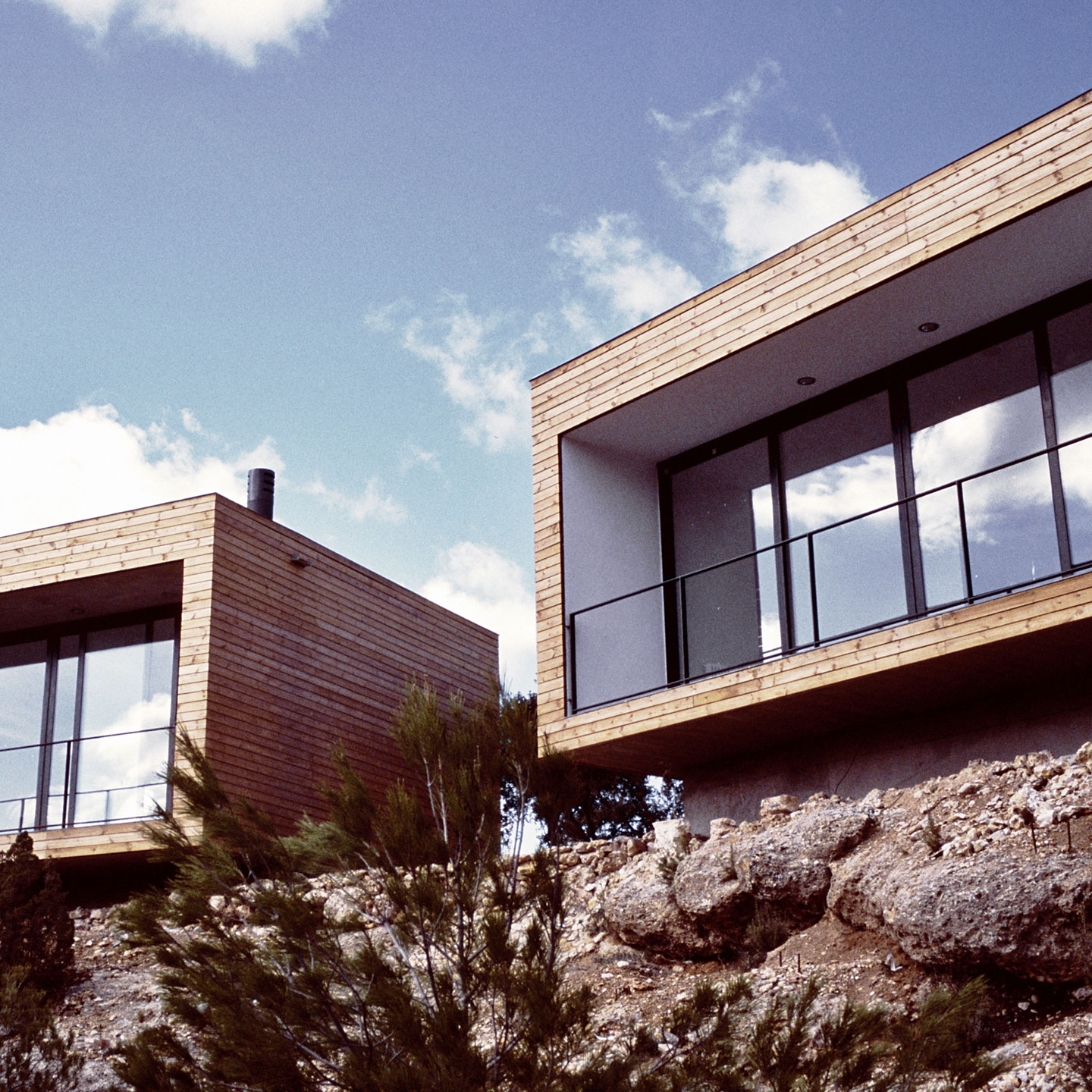 The Aragonese province of Matarraña is traditionally known for its ham, but that’s about to change — world-traveling designophiles will find it’s on their map thanks to Consolación. It’s built from the bones of an old hermitage, and the old building still contains a couple of guest rooms and the bulk of the public spaces. But what’s most striking about Consolación is the modern architecture of the outlying guest rooms, each one a wooden cube perched at the edge of the bluff 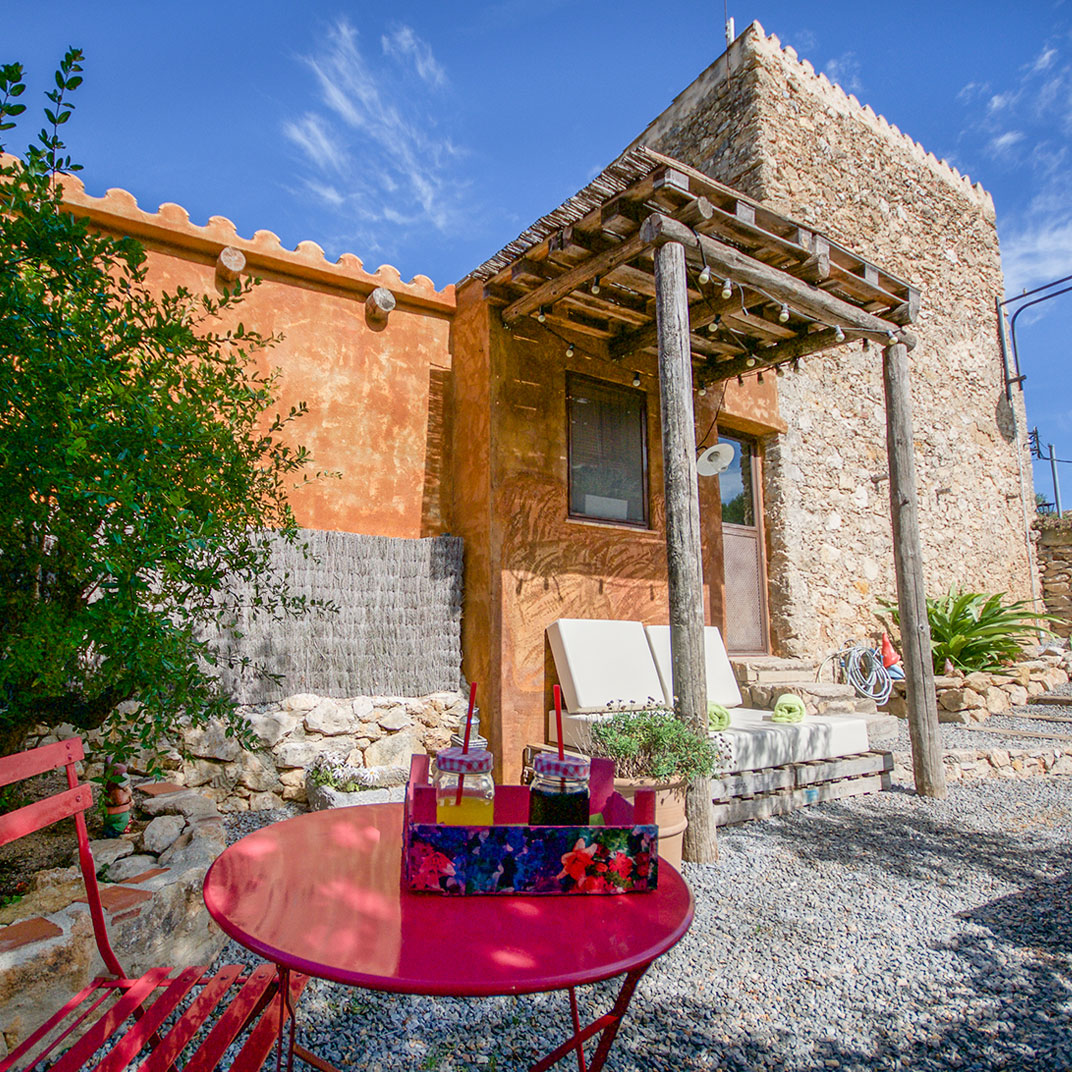 Located in the Empordà, the countryside between the city of Girona and the Costa Brava proper, and set in a 18th-century stone farmhouse, Can Casi is nothing if not tranquil. It’s a labor of love for its owner, Emma, a jewelry designer from Barcelona, who used it as a country house before embarking on an extensive renovation to open its eight charming bedrooms to paying guests. All are decorated in a whimsical, eclectic style, blending original farmhouse architecture with weathered antiques and modern graphic elements, as well as modern amenities. 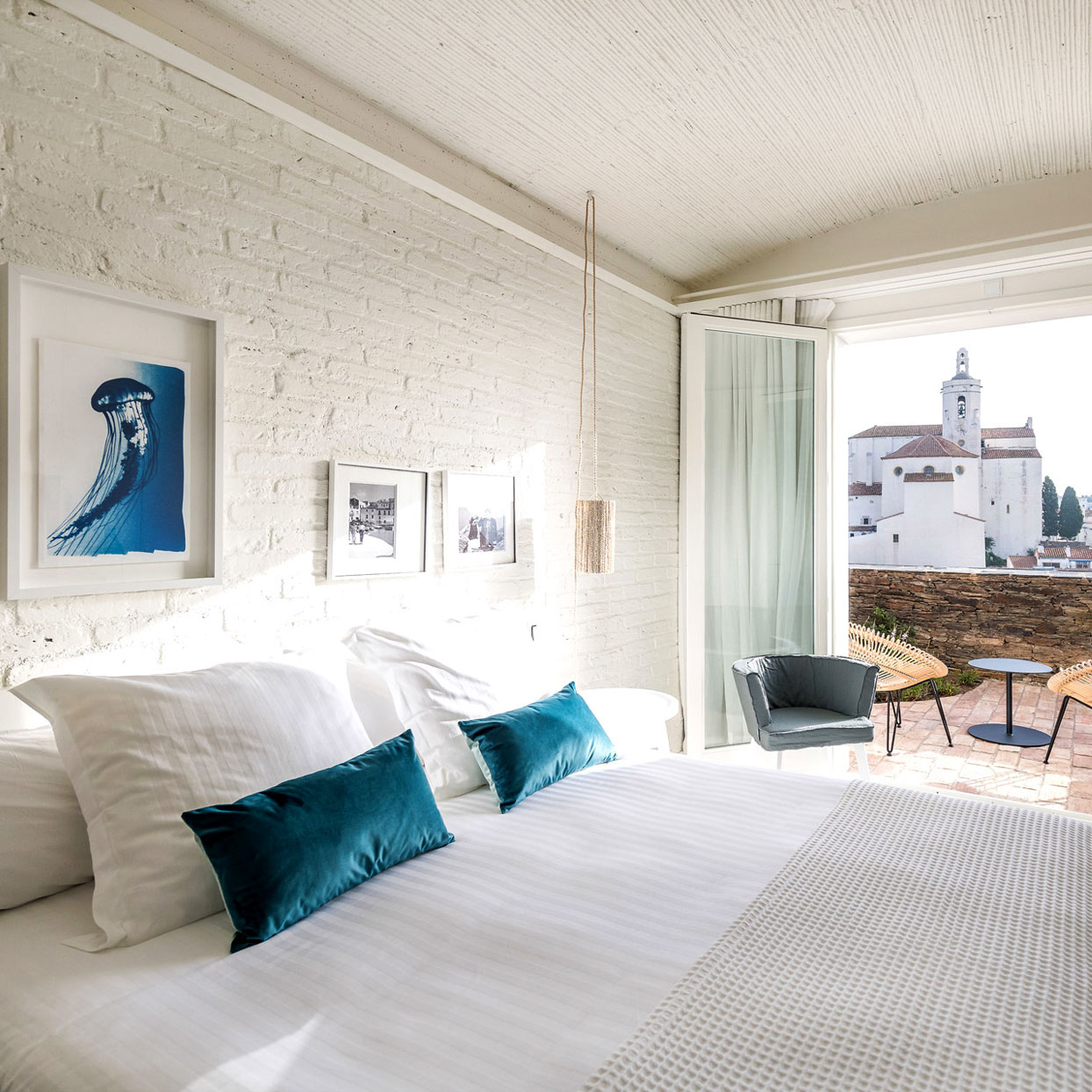 Just over two hours up the Mediterranean coast from Barcelona you’ll find Cadaqués. Presiding over a harbor on a rocky peninsula, Cadaqués is a picturesque seaside town that’s played host to the likes of Picasso, Joan Miró, and Marcel Duchamp, and features a museum dedicated to Salvador Dalí. It’s an auspicious setting for the right kind of boutique hotel, a place with a keen visual sense and a flair for the dramatic — a description that suits Boutique Hôtel Villa Gala to a tee. 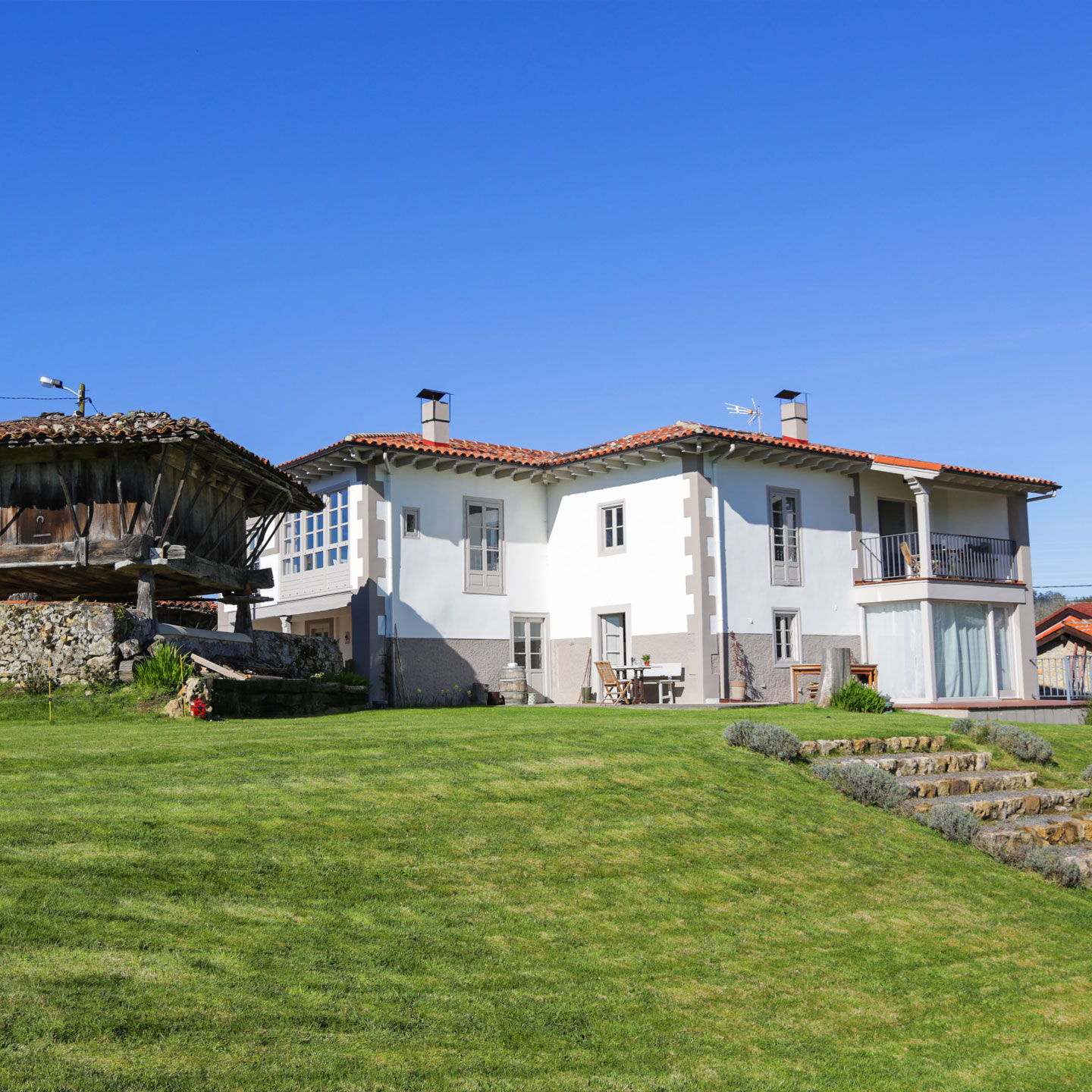 El Gran Sueño looks and feels like a labor of love — one with freshly baked bread and wine on the table, mountain views, and plenty of peace and quiet thanks to a no-kids-allowed policy. The building is an old farmhouse, still surrounded by gardens and apple orchards, but thoroughly restored inside and transformed into a modern guesthouse. There are just five rooms, all individually and exquisitely decorated with a mix of local antiques and modern design pieces by the likes of Louis Poulssen, Achille Castiglioni, Charles Eames, and Eero Saarinen. 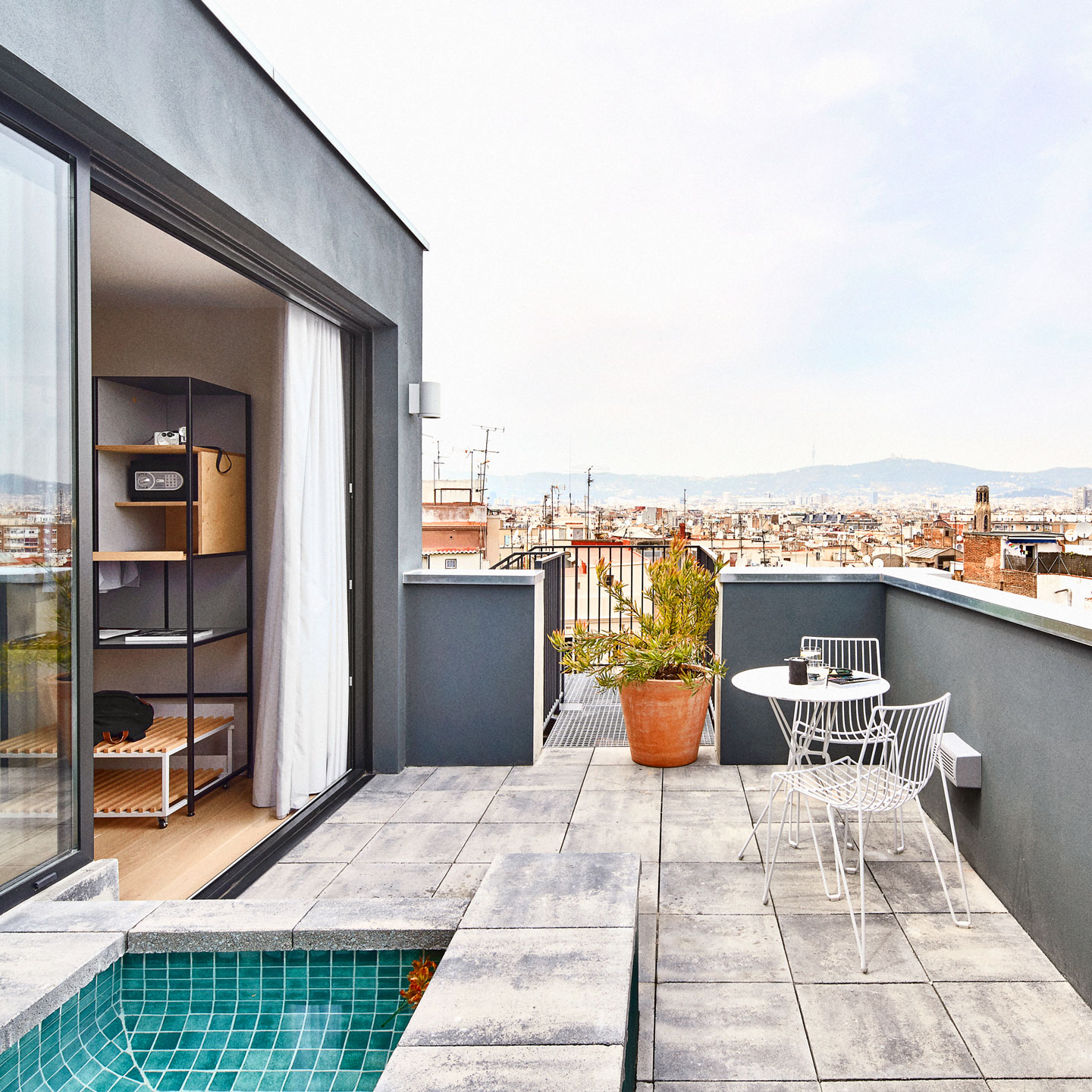 Though the Instagram potential is strong as ever at Hotel Brummell, there’s also a refreshingly down-to-earth sensibility at play. It’s located at the literal edge of the Poble-sec neighborhood, an up-and-comer within easy reach of the shore and Montjuïc hill in the background. That’s Catalan for “dry village,” which contrasts with its abundance of cheap watering holes, which in turn fuel the charming tapas-and-galleries vibe on every street. Roll that all into one and you have Brummell. 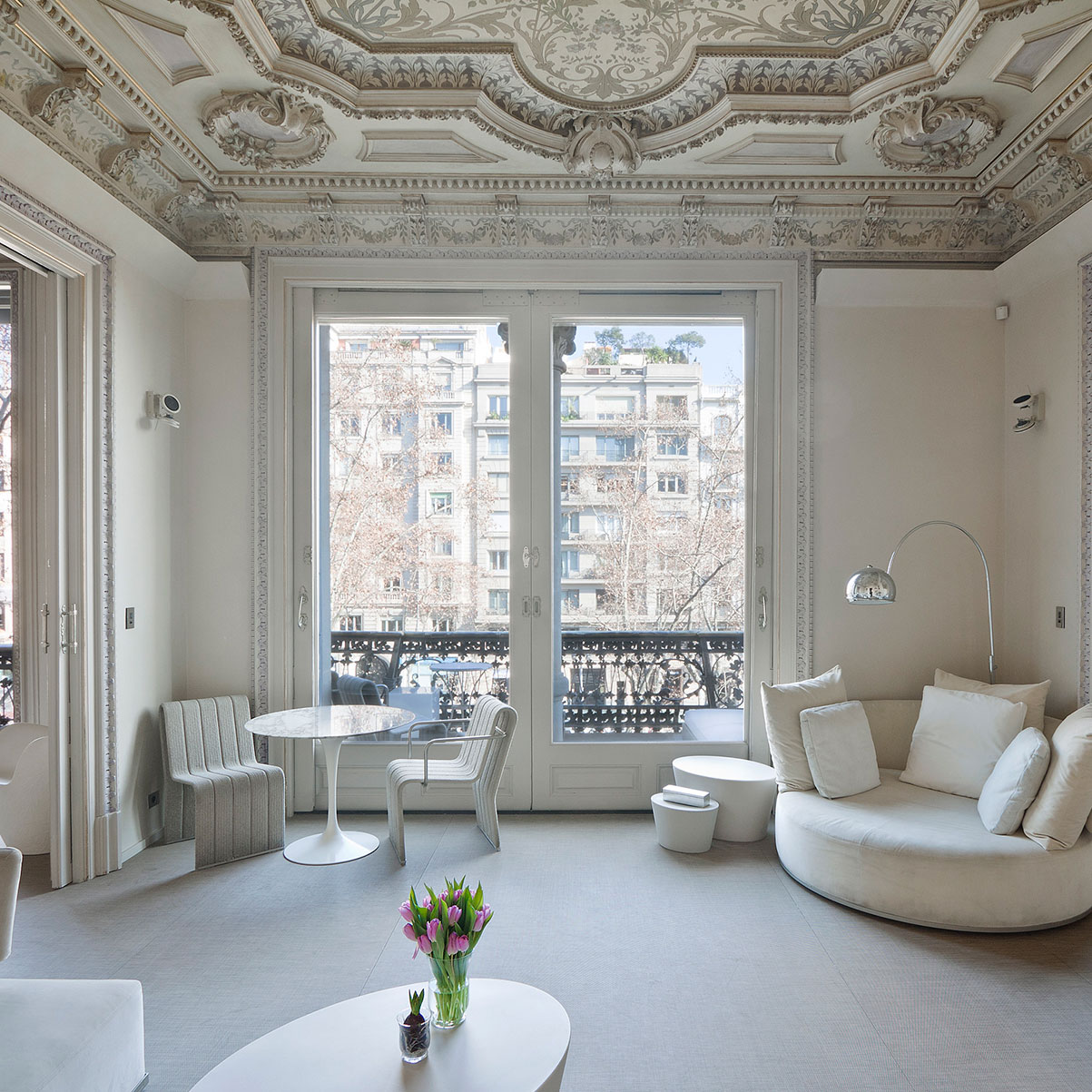 It’s a hotel, but only just — El Palauet Living’s six suites are all two-bedrooms, and it’s a good thing too. It’s hard to imagine having your first look around this place and not wanting to inquire about extending your stay. The look is arresting, a bold combination of baroque and modern architecture, resulting in spaces that feel at once theatrical and inviting. In some flashy boutiques the décor is an inch deep, but here the high-end furnishings and solid construction ensure that these interiors are as functional as they are well-formed. 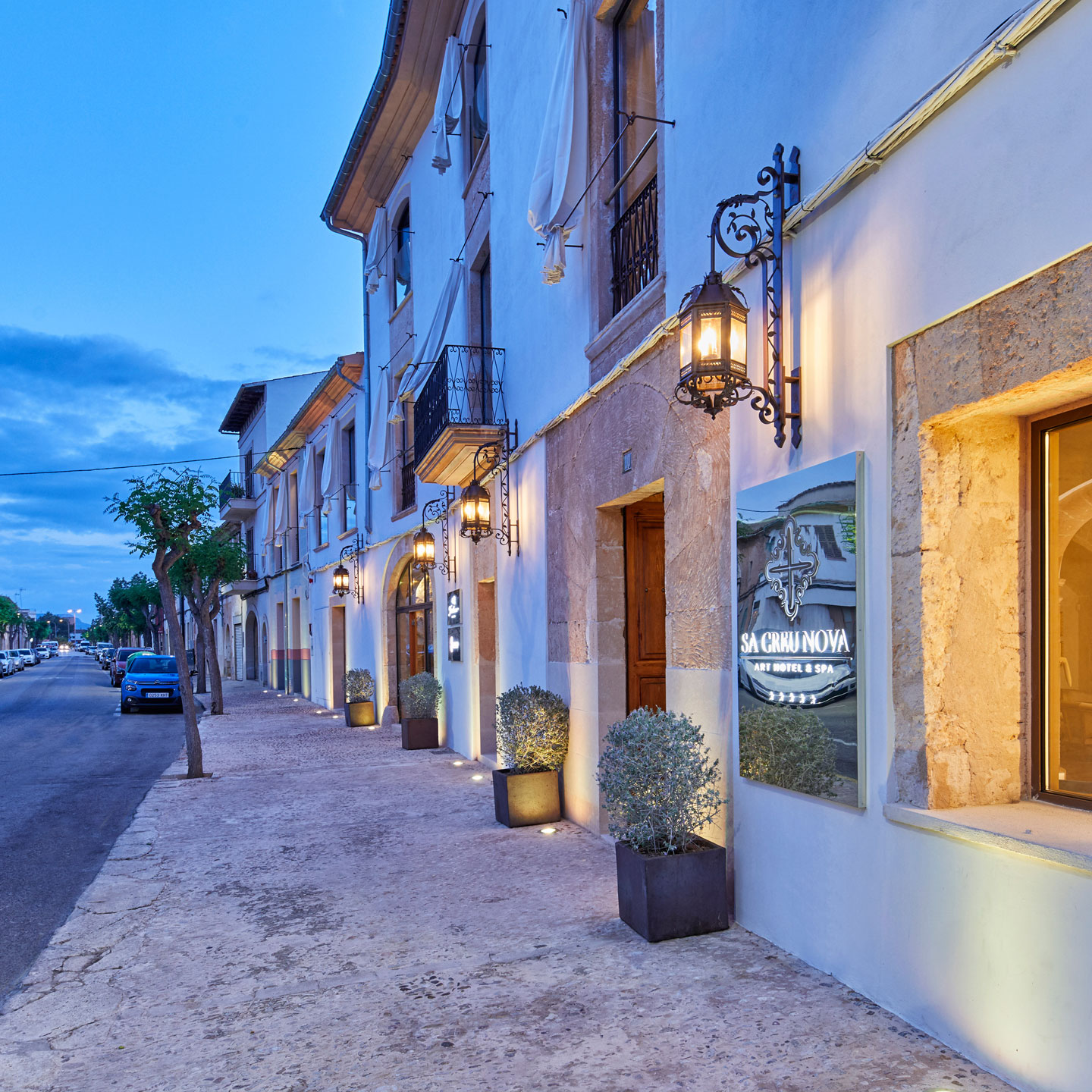 Mallorca is far from obscure, but the town of Campos is one place on the island where you can still get away from it all. It’s also the home of Sa Creu Nova Art Hotel & Spa. Though crafted from a historical structure, Sa Creu Nova is an entirely modern boutique-hotel experience. Rustic on the outside, the occasional rough-hewn stone wall only adds atmosphere to the clean-lined bedrooms, and the simplicity of spaces draws the eye to the artworks — there’s an impressive contemporary collection distributed throughout the hotel. 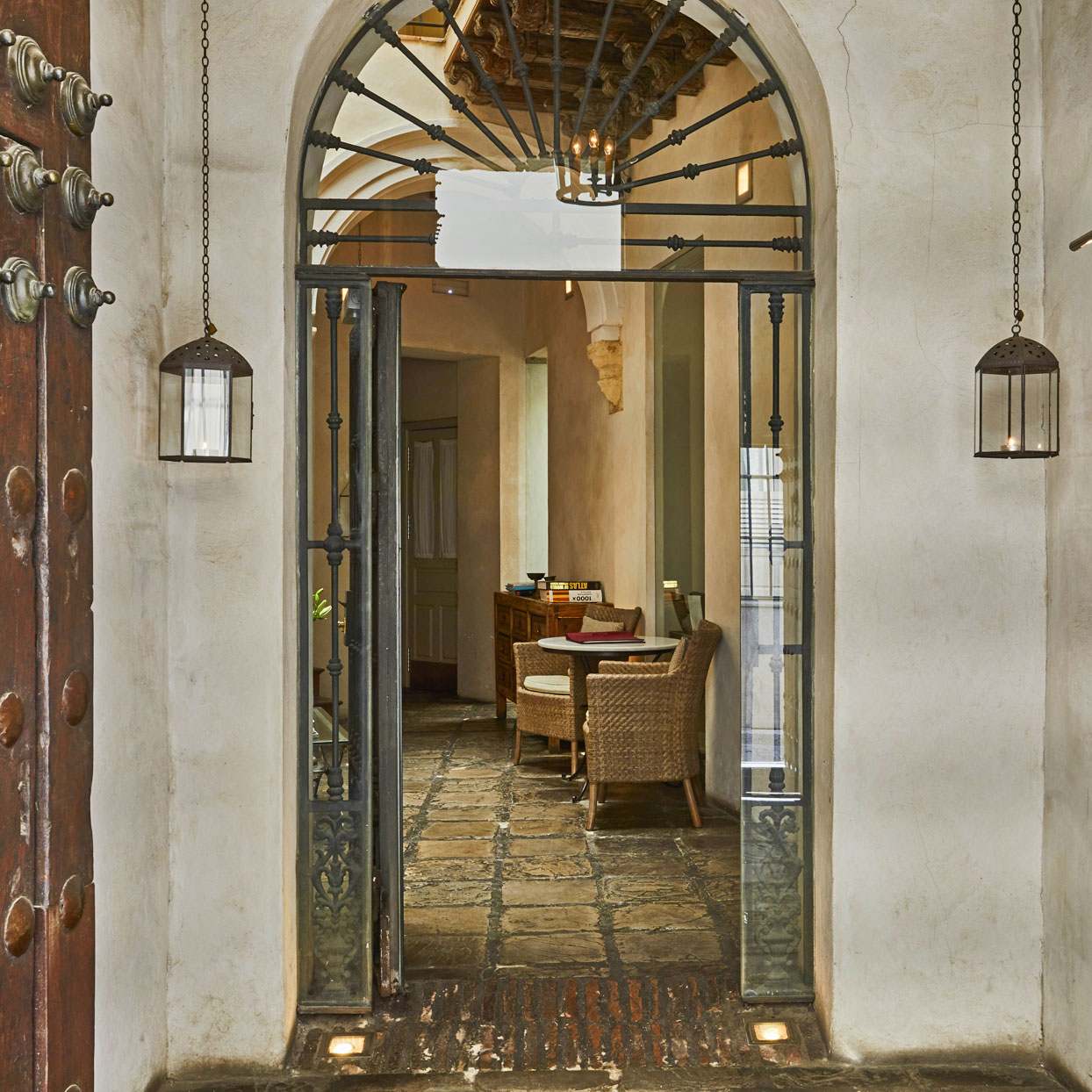 Seville sets the bar pretty high when it comes to classic, elegant architecture and design, but Corral del Rey proves to be more than up to the challenge. This 17th-century palacio is something special, with its three-story atrium and its beautifully preserved interiors. And its proprietors, in the course of transforming it into a 17-room boutique hotel, have made the most of these promising materials. The style is contemporary, but with a light enough touch that the design blends seamlessly with the gorgeous period architecture. 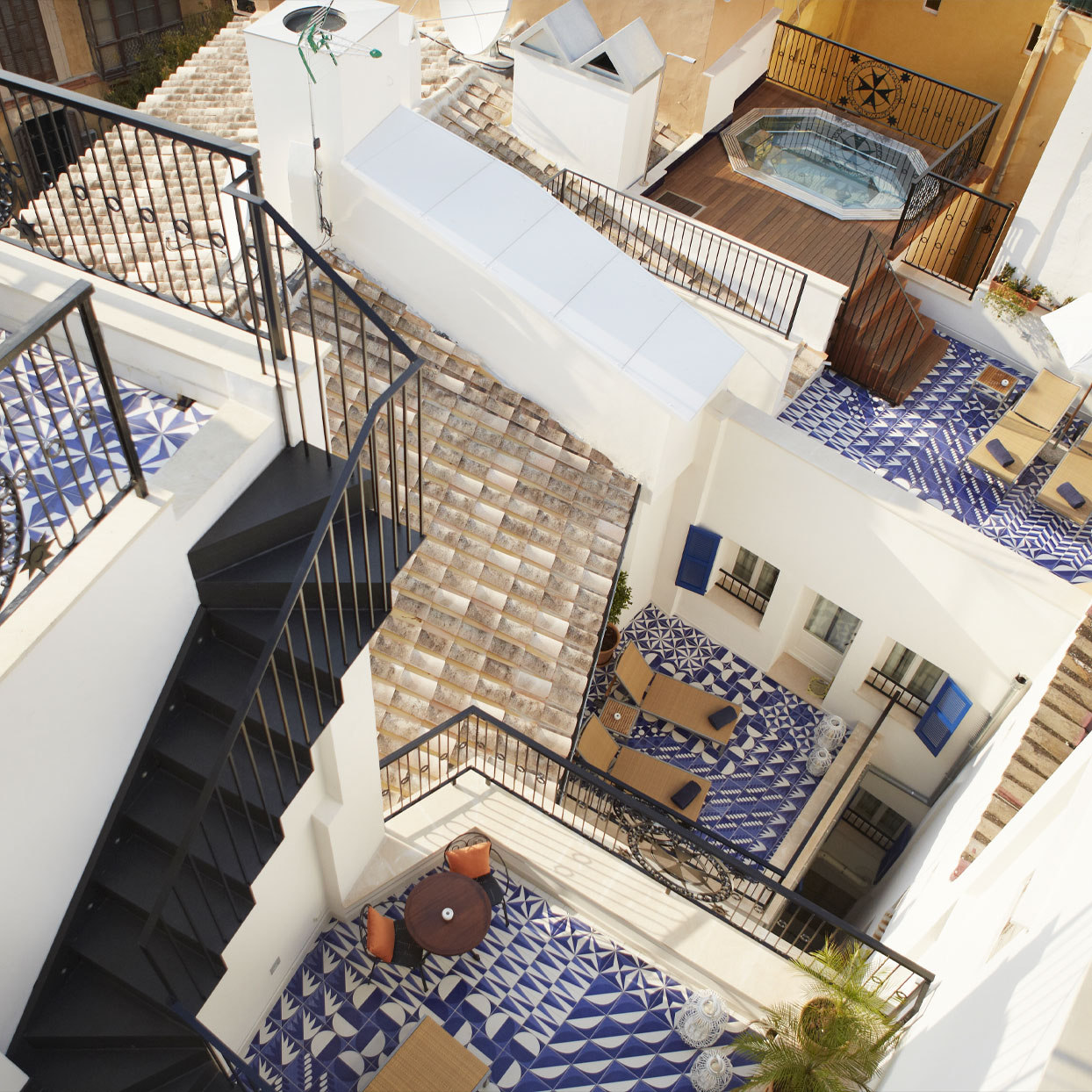 It’s a pretty tempting package: a balmy Mediterranean island, a picturesque, ancient fortified city, and a century-old building transformed into a totally contemporary sixteen-room boutique hotel. But Hotel Cort, in the old city of Palma de Mallorca, is something special, over and above any description of its vital statistics — this place, to put it simply, has real personality, and as far as we’re concerned, that’s what matters. 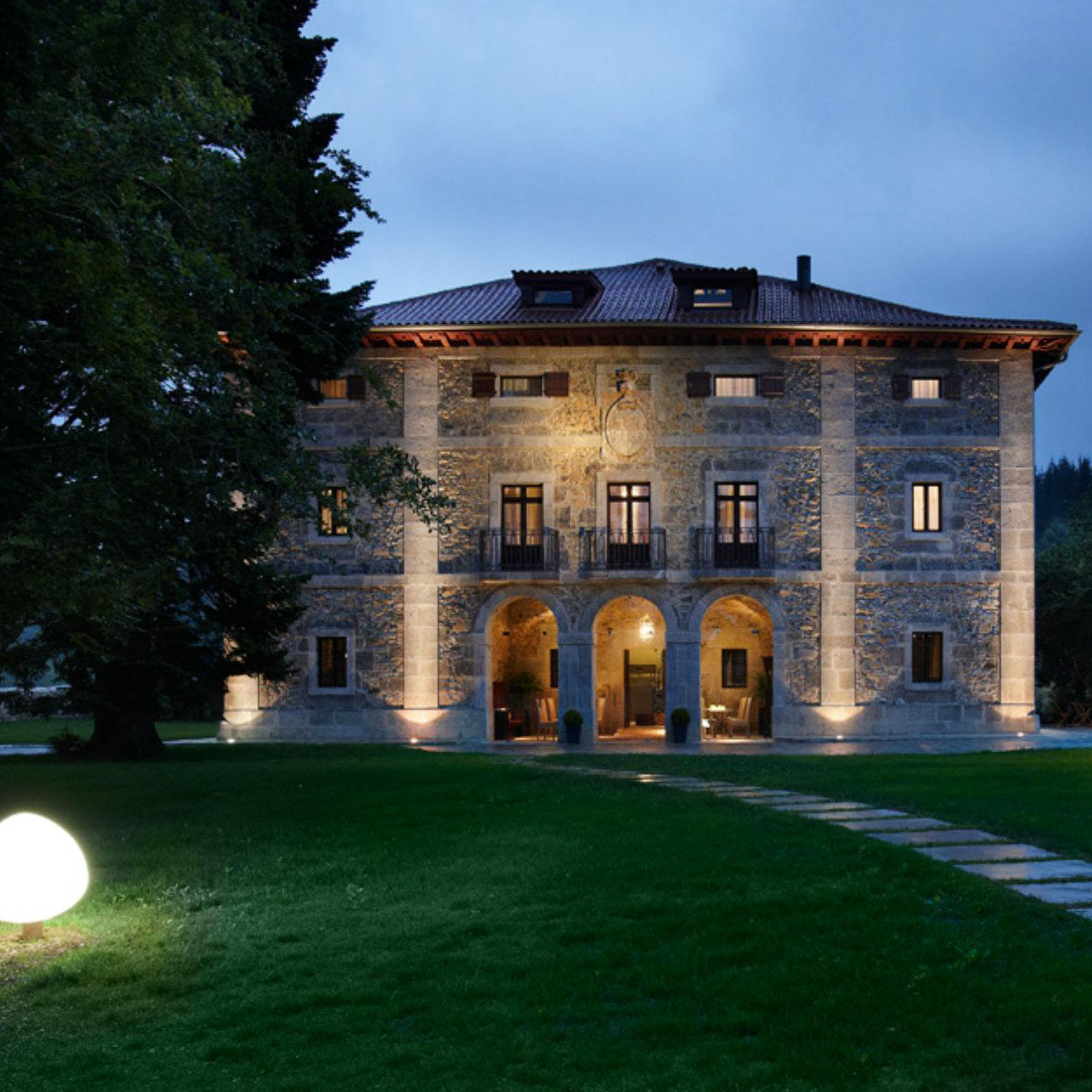 Iriarte Jauregia is located twenty-five minutes south of San Sebastián — close enough for guests to explore the vibrant city, but sufficiently removed to provide a deeply relaxing pastoral experience in the lush countryside of Gipuzkoa, a small, verdant Basque province. Housed in a fully renovated 17th-century palace, with the trappings of a modern boutique hotel carefully tucked away behind the original structure, Iriarte Jauregia feels eerily integrated with its breathtaking environment. 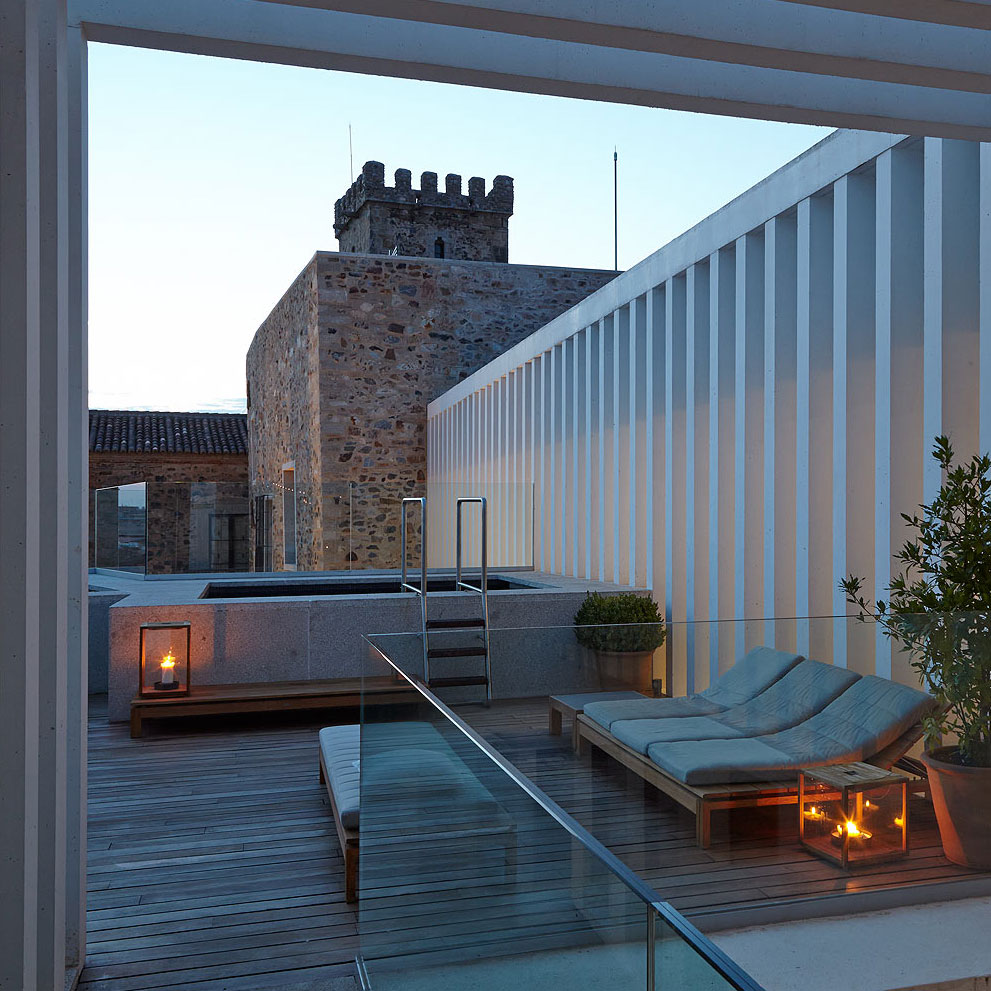 Even without the hotel, Atrio’s restaurant alone would easily merit a detour. It’s a serious establishment that’s perfectly matched by a wonderfully peaceful, architecturally striking hotel whose fourteen modern, clean-lined rooms have been masterfully integrated into the stone facade of a much older building in Extremadura’s ancient walled city of Cáceres. If there’s a single bit of ornament, it’s the art; original works by Andy Warhol and Georg Baselitz are the highlights of an impressive collection. 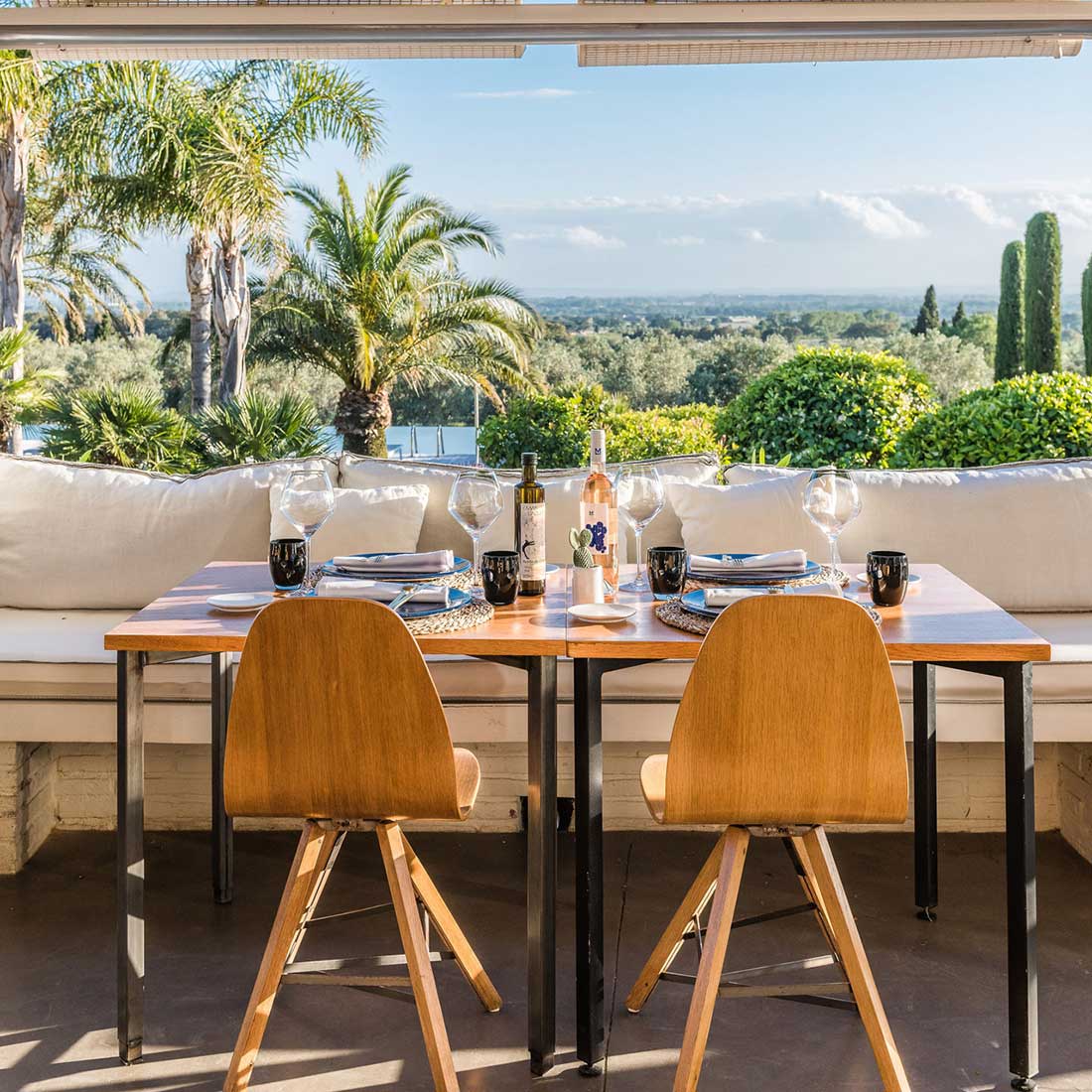 30 minutes from Girona, near the French border, is Hotel Mas Lazuli, a 17-room boutique housed in a historic convent that dates to the 11th century. Life is a little less frantic here — this is the sun-drenched Costa Brava, complete with historic landmarks and a slowed-down pace that seems to always encourage another siesta. The hotel’s old stone buildings are grand and romantic, set amid palm trees, vineyards, and olive groves. And the architecture, mirrored in the still water of the infinity pool at sunset, seems to blend right into the landscape. 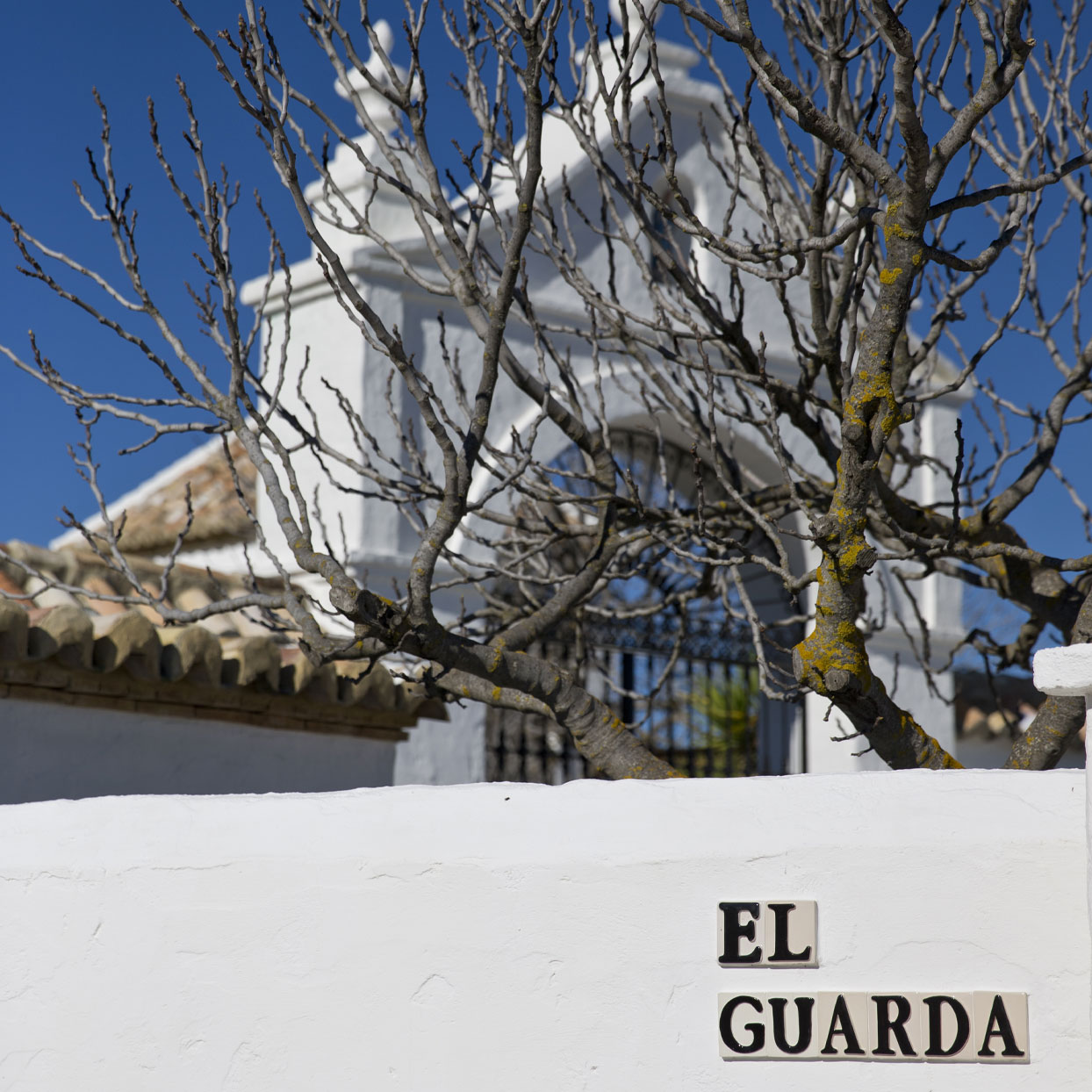 Cortijo El Guarda is a five-room, 500-year-old farmhouse in the Andalucian countryside, meticulously renovated so that you can leave the 21st century behind without actually having to live like a 16th-century country bumpkin. The look of the place is as classic as can be — whitewashed walls baking in the sun, a courtyard shaded by orange trees, sunny little rooms with antique wooden beams overhead — but the amenities are thoroughly modern.