Twice the pinnacle of American tourism, the Catskills have ebbed and flowed in popularity over the past couple of centuries. But the cradle of modern comedy is standing up once again — for the same reasons as always.

Killing used to mean something quite different in the Catskills. Back in its Borscht Belt heyday, comedians like Mel Brooks, Henny Youngman, and Lenny Bruce killed by making audiences howl with laughter. Nowadays, it’s the small businesses and rejuvenated hotels that are making a killing by hosting a new generation of guests.

Today, modern visitors to the Catskills come in search of the same things as those travelers from the past: good, clean country. They head north from New York City loaded into cars and trains and, with each passing minute, the air around them clears and the space outside opens wide.

Early Tourism in the Catskills

By the early 19th century, New York City was such a disgusting cesspool of human sewage and pollution, “travelers frequently declared they could smell the city two or three miles away,” according to Stephen Silverman’s The Catskills: Its History and How It Changed America. With a quote like that ringing in your nose, you can imagine why the region’s most famous resort — the Catskill Mountain House — became such a hit.

The hotel, with its grand white columns and staggering mountain views, represents one of the most significant landmarks in the history of luxury hotels. Its 1824 opening marked the era that “vacation” itself became a known quantity in America, one soon decried by Sunday sermons as “equated with financial and spiritual decay.”

Undaunted by that savage review, the Catskills drew American royalty to its wilderness tableau. The Mountain House itself boasted visits by everyone from American presidents to Mark Twain and Alexander Graham Bell. Lauded as it was, the Mountain House eventually succumbed to competition from other grand hotels and, as the pattern goes, to a newly trendier destination, the Adirondacks.

But another scene lurked around the corner, ready to usher in the Catskills Golden Age.

The earlier Catskills hospitality scene had shunned Jews. Now, spurred by an influx of Jewish immigrants from Eastern Europe, hundreds of Jewish-owned hotels welcomed them, entertained them, and (mostly) fed them, peaking in the 1950s. We know it as the Borscht Belt, but there’s plenty of other delightful nicknames.

These new guests needed entertaining, and the hotels, competing for their clients’ attention, inadvertently gave roots to American comedy. Among the earliest forms of entertainment at the Jewish resorts was the “tummler,” a gig that originally arose in the shtetls of Eastern Europe. Back in the old country, according to Silverman’s history of the Catskills, a tummler was an “itinerant Jewish funnyman who was hired to amuse guests at weddings.” In the Borscht Belt, according to former tummler Mel Brooks, it was “a resident offstage entertainer at a Jewish mountain resort, mostly after lunch.”

To get an idea of the type of gags they pulled off, here’s Mel Brooks remembering one bit:

I walk out on the diving board wearing a black derby and a big black alpaca overcoat. I’m carrying two suitcases filled with rocks. ‘Business is terrible!’ I yell. ‘I can’t go on!’ And I jump in the pool. Big laughs — the Jews love it. But I don’t laugh — because the suitcases weigh a ton and like a shot I go to the bottom. The overcoat soaks up 20 gallons of water instantly. I run out of air, but I can’t lift the suitcases – and I can’t leave them in the water. They’re made of cardboard, in two minutes they’ll dissolve, and I need them for tomorrow’s act. God bless Oliver, that big goy! He was the lifeguard — Jews don’t swim, remember? And every day he’d do a little swan dive and haul me up.

As the decades went on, what we recognize as today’s stand-up comedy came to the Catskills. As vaudeville died out, the type of fast-paced, setup-punchline routines that developed in 20th-century New York City theaters found a home in the Catskills resorts. In some instances, vaudeville comics despairing over the popularity of radio found themselves suddenly in need of a live audience. And if the Catskills had anything, they had that.

By the 1950s, comedy in the Catskills “was a very established institution,” according to Jeremy Dauber, a professor of Yiddish culture. “Like in the vaudeville circuits or in baseball, you had bigger leagues and smaller leagues, and you were either playing at the big hotels or the small hotels and you could work your way up.”

While the older comics had come ready to entertain, greats like Sid Caesar, Henny Youngman, and Jerry Lewis got started here. Over time, all the legends would come through. Lenny Bruce, Jackie Mason, Bill Cosby, Billy Crystal, Don Rickles, Milton Berle, Joan Rivers, and a young Jerry Seinfeld. They all played the Catskills. Some as stars, others as starters, cutting their teeth on Borscht before the Ed Sullivan show.

The Kvell Epoch ended around 1965. First the Adirondacks had sunk the Catskill Mountain House, now it was affordable air travel. Among other factors. Jewish families moved to the suburbs, where a rural escape didn’t feel as crucial to summer survival. The Civil Rights Act of 1964 outlawed officially anti-Semitic hotels. And, just the way it goes, the new generation didn’t go for it.

But the impact had been made. As Dauber put it, “the Borscht Belt was represented in the DNA of American performance comedy in many deep ways for the next 20 or 30 years.” In terms of sheer creative influence, American comedy will always owe it a debt.

The Phoenicia diner. Summer 2018. I looked up from my crab cake BLT to see a man in a greased handlebar mustache. Squeezed in the booth with him, a lady in a khaki jumpsuit. Behind them, a family of five — stroller in the aisle — each dressed in their own choice of plaid, right down to the baby spitting up on her own trendy jumpsuit. Around me, hats jaunted out at every angle.

And I thought to myself: am I back in Brooklyn?

I wasn’t the first Jew to think it.

The Catskills, by sheer geography, always seem to absorb the prevailing trends from New York City. The region’s making news again now as people from the city look, as they always have, for a place to escape it.

As the Borscht Belt fizzled and died, new visitors rediscovered its charms.

The New York Times has written of “instant communities” forming in places like Sullivan County, where the relocation of one family from Brooklyn caused a chain migration, a close-knit group of friends and family moving, one after another, to a town that already had the types of trendy bookstores and coffee shops you might better expect in Brooklyn Heights. Actually, make that bookstore and coffee shop. Trendy, yes, but still a small town.

Today, that’s part of the appeal for new residents and tourists alike, with the hospitality scene in the Catskills reflecting the influx of former city dwellers. The Graham & Co., whose four owners in the design field started their boutique in the Catskills while retaining their lives in Brooklyn. The Roxbury, meanwhile, sports vibrant and contemporary design themes that mix with the retro. On that note, the history of the place is never out of mind. Spots like Eastwind and the Roundhouse, in nearby Hudson Valley, actually repurpose structures left over from the region’s long past to create their own stylish boutiques. And, similar to the Mountain House, recently renovated Troutbeck once hosted legends like Ralph Waldo Emerson and Henry David Thoreau.

In a place where tourism has always seemed to boom and bust, the Catskills hope to prove it’s once again standing up.

Interested in learning more? Check out Raphael Silver and Stephen Silverman’s The Catskills: Its History and How It Changed America, from which much of this article was sourced.

The Hotels: The Catskills and Beyond

The Catskills and the neighboring Hudson Valley make an ideal summer destination. Though the city is just a two-hour drive away, the difference in pace and style — despite the recent influx of city dwellers — between upstate New York and the metropolis cannot be overstated. 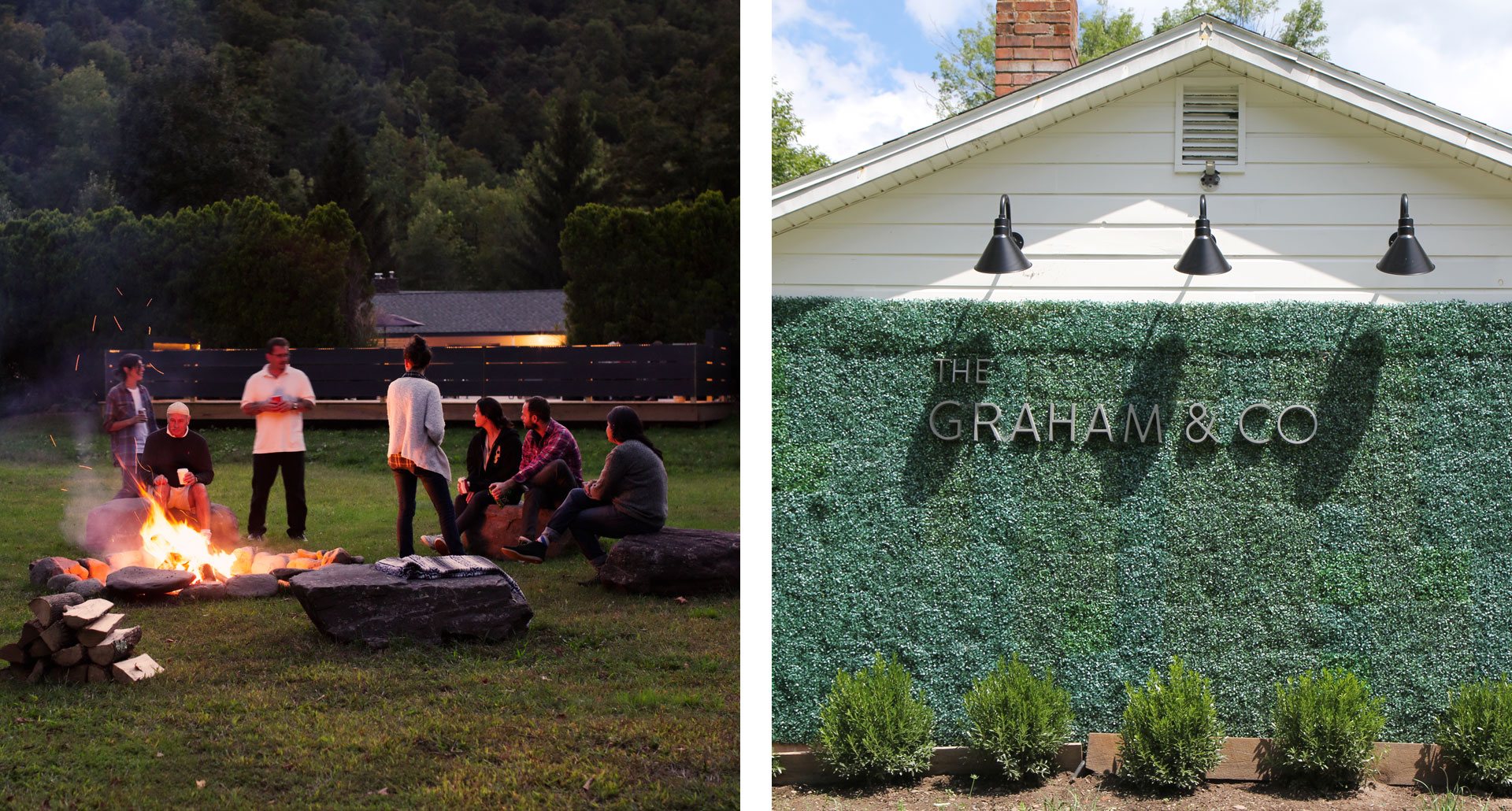 A renovated twenty-room motor lodge in Phoenicia, just west of Woodstock, the Graham & Co. is the sort of place that might qualify as central New York State’s best-kept secret, if only people would stop raving about it for a second. Vintage charm, a savvy collector’s eye, and a keen design sensibility make city-bred boutique-hotel freaks feel right at home, while free bikes, patchy cell service and a trumped-up Catskills vs. Hamptons rivalry help you get in a mood to properly unplug. 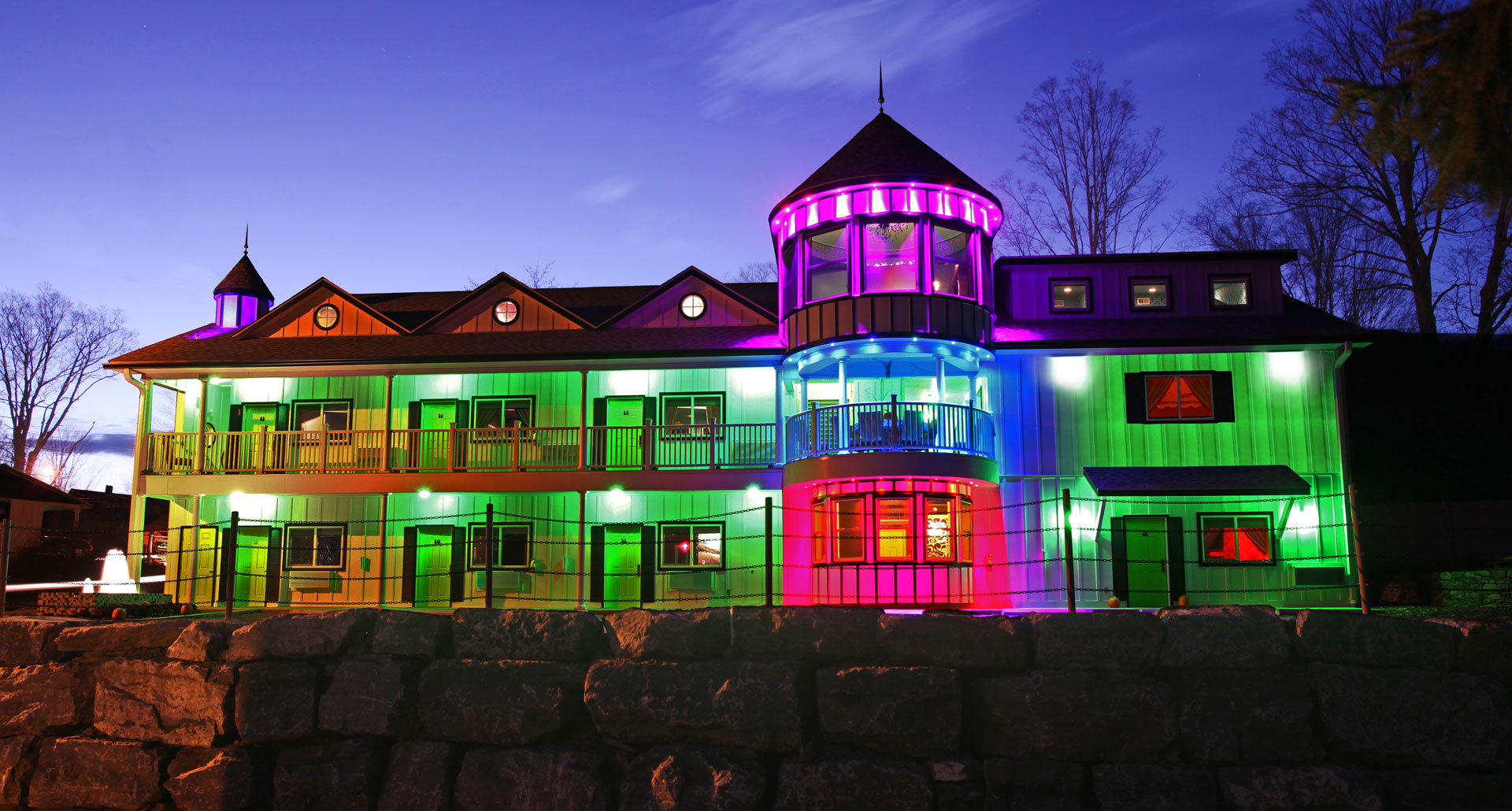 The Roxbury breaks the mold a bit — the colonial house might put you in mind of a bed and breakfast, and the adjoining motel building is a low-profile pre-modernist classic. Rooms, however, are anything but traditional, with design themes that range from the vibrant and contemporary to the flamboyantly retro. The idea here, clearly, is not minimalism but a sort of maximalism, throwing the usual boutique clichés out the window. 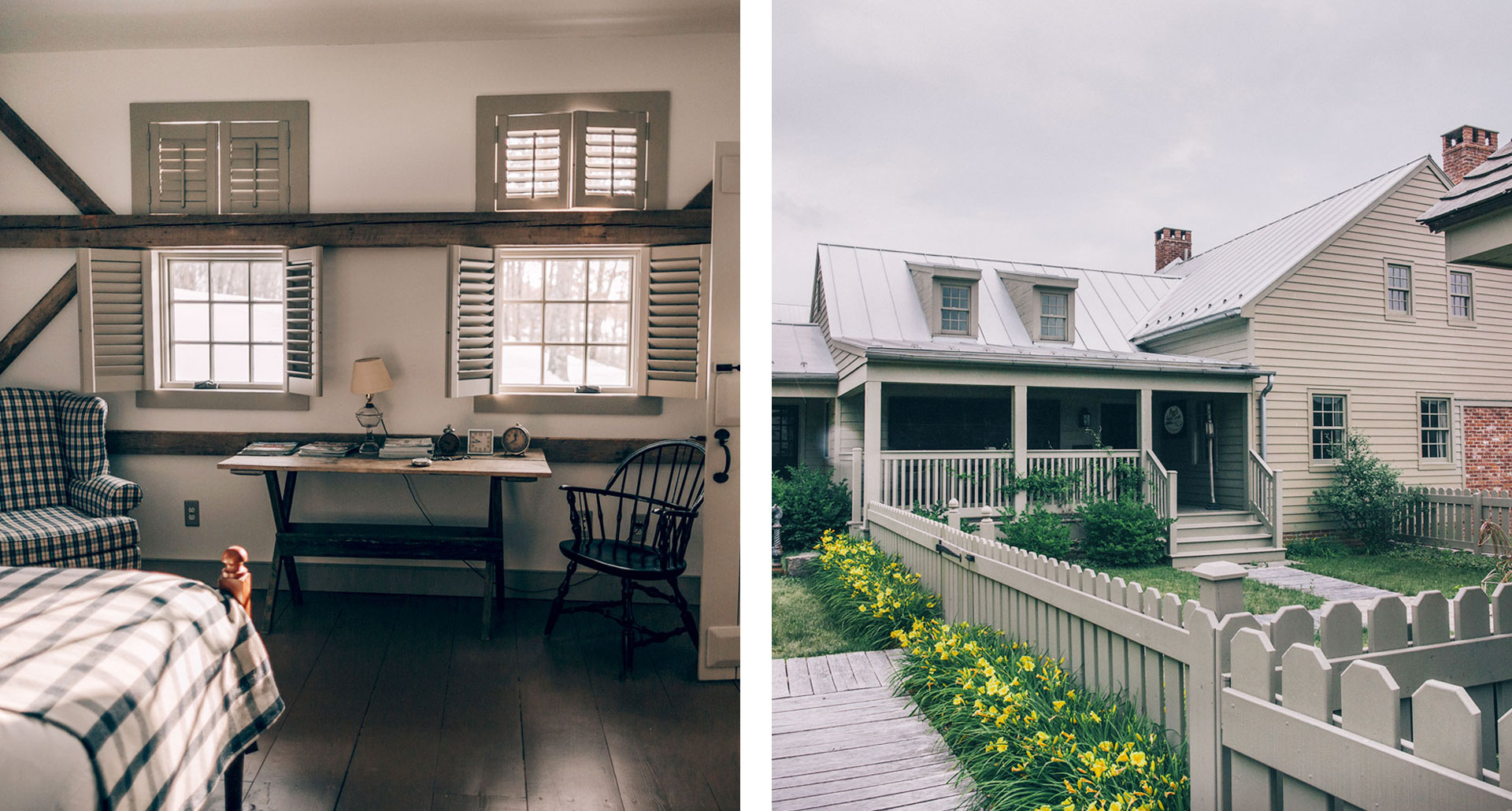 Before you fire off that email, let us assure you that Dutchess is indeed spelled with a T, in the manner of upstate New York’s Dutchess County. This Hudson Valley hideaway styles itself a “secret hotel,” and they do a pretty good job of keeping the details mum. It’s a model that’s meant to work via personal recommendations within a self-selecting community of travelers — kind of like Tablet, now that we think of it. 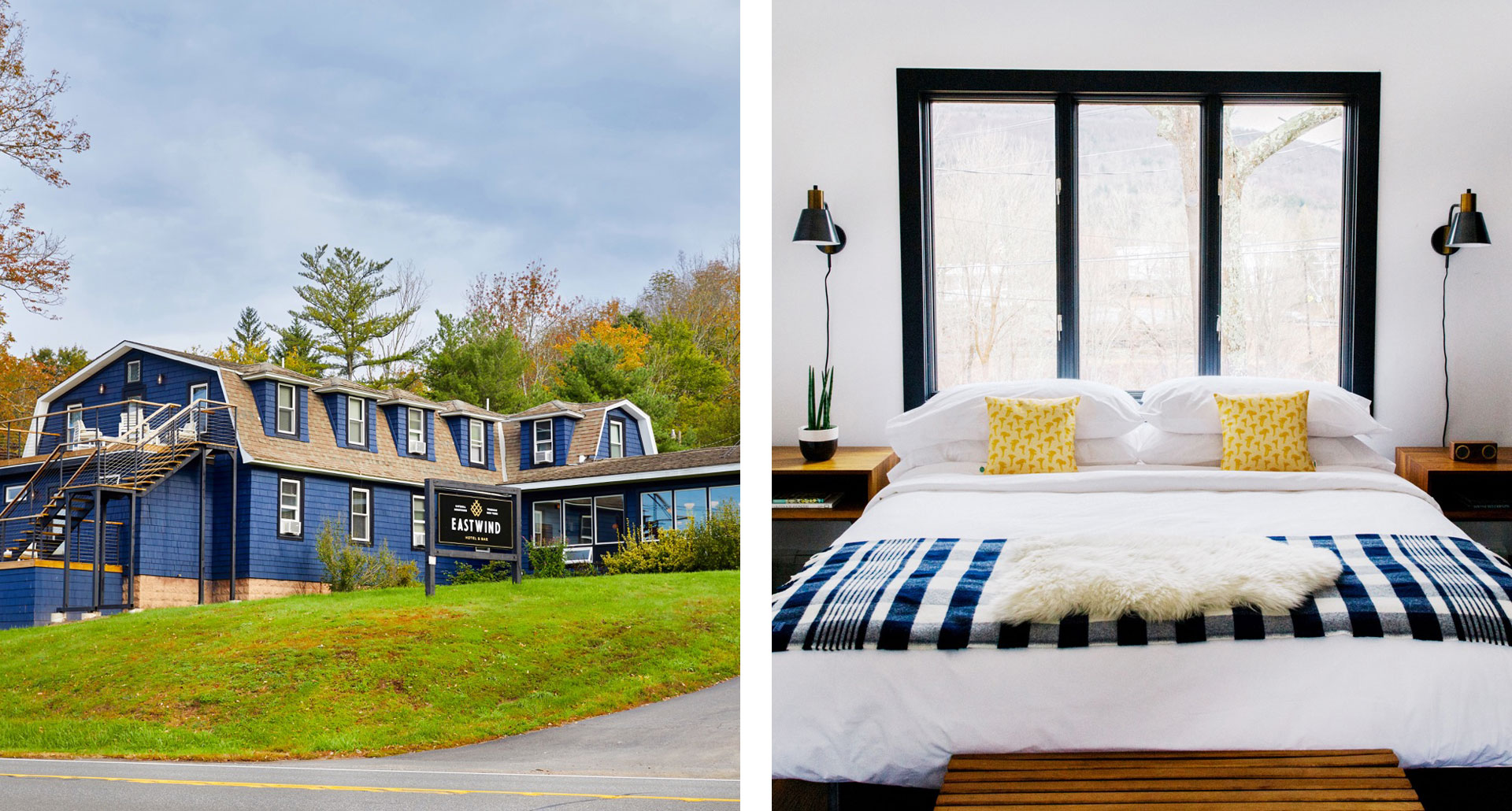 Eastwind is co-owned by a German/Lithuanian couple who saw a bit of his own childhood in the landscapes and lodges of upstate New York, and who redesigned this 1920s-era lodge (and its outlying A-frame cabins) with an eye toward Scandinavian modernist style. The result is a sort of high-design summer-camp vibe, with more than a touch of luxury — vintage furniture and Frette linens happily cohabitate here. It’s a refreshingly unique vision. 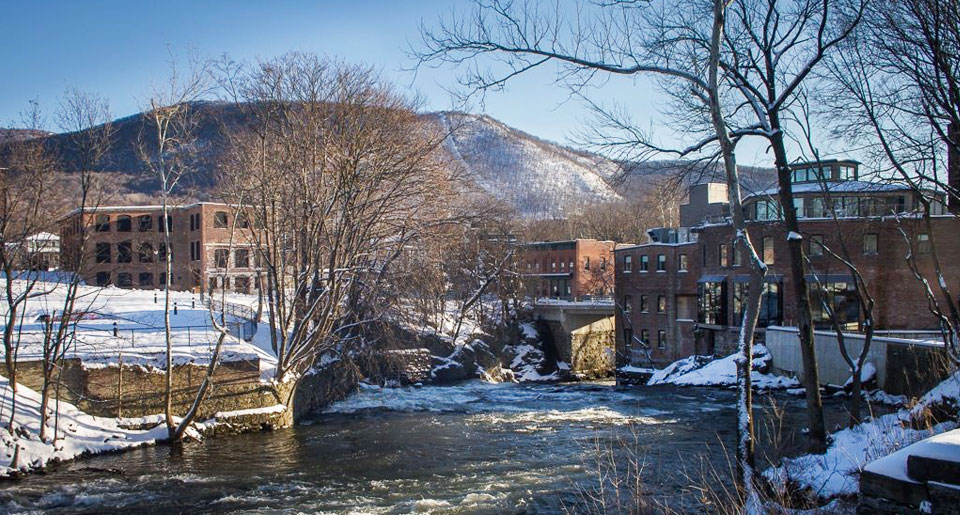 The very picture of the modern post-industrial luxury hotel, at the Roundhouse — its bones a thoroughly renovated old mill — sleek mid-century furniture sits underneath exposed concrete ceilings. A fifteen-minute walk from the Dia Art Foundation, the impressive contemporary art museum that made Beacon its home in 2003, it’s the epitome of the region’s pastoral charm mixed with contemporary arts. 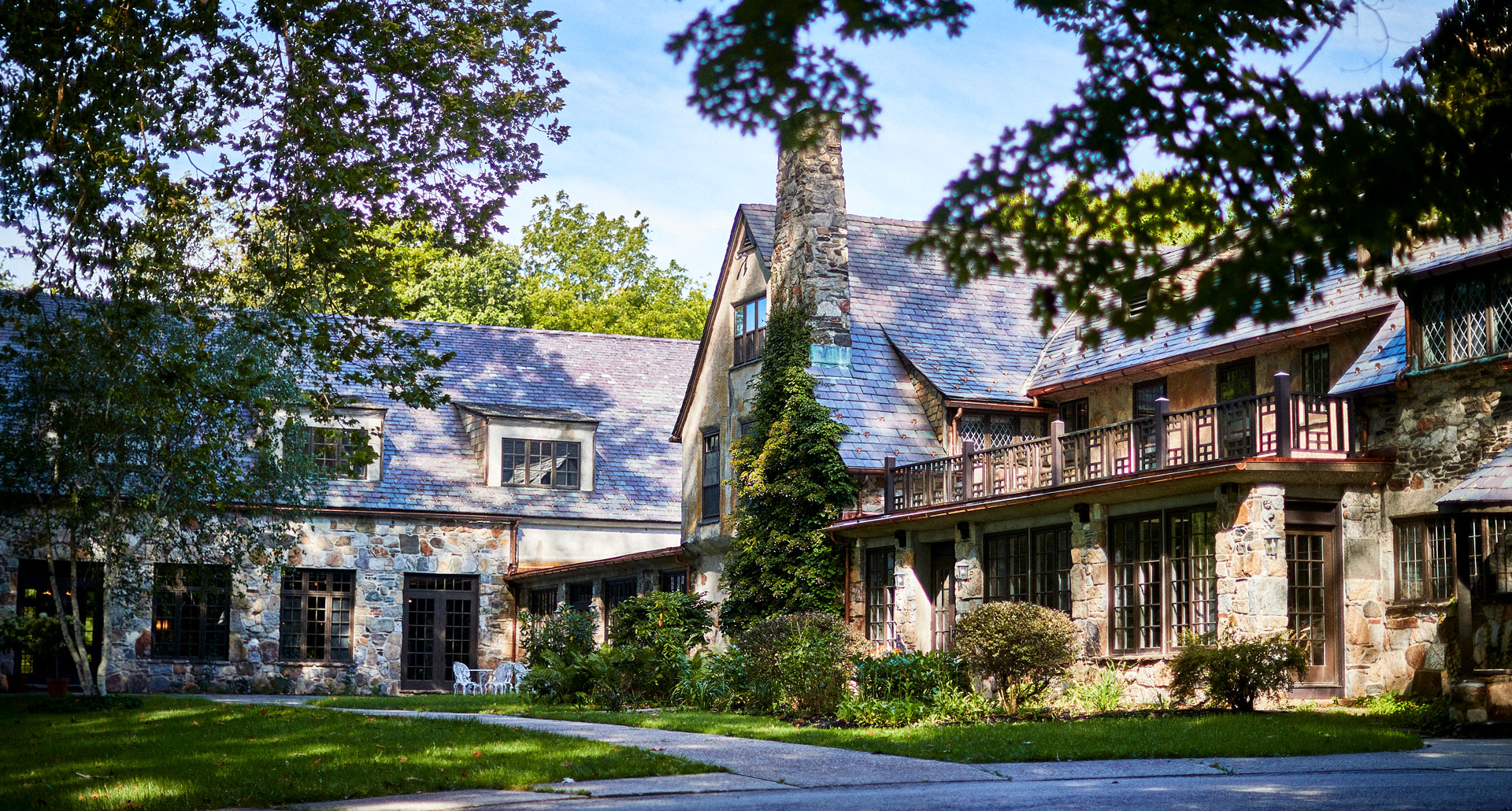 Troutbeck didn’t just wake up one morning and decide to style itself a creative retreat — it’s been walking the walk for well over a century, having welcomed Mark Twain, Ralph Waldo Emerson, and Henry David Thoreau, and many others along the way. And while this estate, in Amenia, two hours from Manhattan, has seen some changes over the years — the Century Lodge dates back to 1760, while the Manor House was added in 1919 — it’s perhaps most remarkable for its continuity.