It’s hard enough to find success with one line of boutique hotels. To be responsible for three of them, like the Sydell group, is extraordinary.

You probably haven’t heard of the Sydell group, but if you’ve paid any attention to Tablet, you’ve definitely heard of their hotels. Freehand, LINE, and NoMad hotels are popping up in cities all over America, and making a significant impact. Some of you, we’re sure, are surprised to hear that each of these quite different boutique hotel chains all fall under the same umbrella. It’s hard enough to find success and a distinct identity with one line of hotels — to be responsible for three of them is extraordinary.

To make this high-wire act even more daring, Sydell isn’t targeting three completely separate kinds of customers — a tactic the mega-chains use to crowd the market. No, each of their brands aims instead to meet a similar type of traveler at different points of their journey, an arguably harder proposition. Sydell angles their hotels toward guests of varying ages and budgets, but who all share an eye for detail, a taste for what’s current, and a modern interpretation of urbanity. Luxury is on offer as well — just not the stuffy, inaccessible kind.

The Freehand hotels, with available hostel-style rooms, are nonetheless proper modern boutique hotels, but geared toward a slightly younger audience seeking a more communal, more collegial experience. This is your entry point. The LINE hotels aim a bit more upmarket, and are the kind of stylish, cutting-edge boutique hotels that are becoming the new standard across the hospitality world. At the top end are the NoMad hotels, plush boutiques with a more luxurious fit and finish and sometimes, as is the case with the New York location, a Michelin-starred restaurant.

Sydell might not even stop at three brands, as evidenced by the Saguaros in Scottsdale and Palm Springs — playful, colorful hotels that seem intent on starting a party by sheer force of design. Or The Ned in London, a members’ club and luxury boutique hotel done in partnership with Soho House. Speaking of London, a third NoMad Hotel — the first in Europe — is opening there soon, along with another in Las Vegas. The sky’s the limit, and while the major hotel groups focus on dominating the industry, Sydell, in true boutique fashion, focuses on dominating their corner. 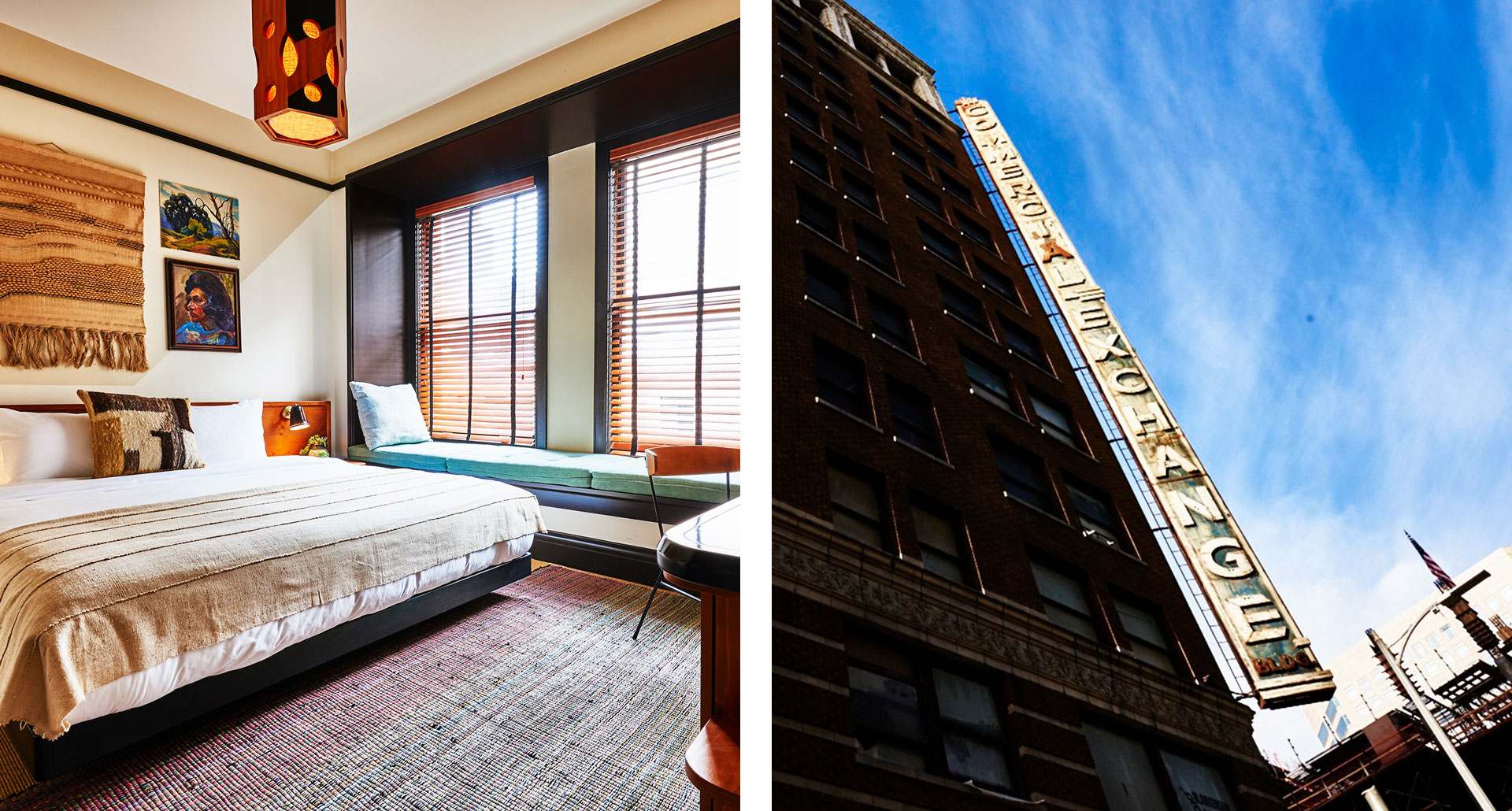 Follow the enormous neon “Commercial Exchange” sign — at 12 stories, the largest in the city — to a historic, renovated office building, once the home of Edgar Rice Burroughs’s publishing company. (There’s a suite named after him on the top floor of the building with unbeatable panoramic views of DTLA.) Inside, designers Roman & Williams outfitted the generous guestrooms with dark woods and cream walls, big windows with plenty of light, and Angeleno artwork hanging on the walls. 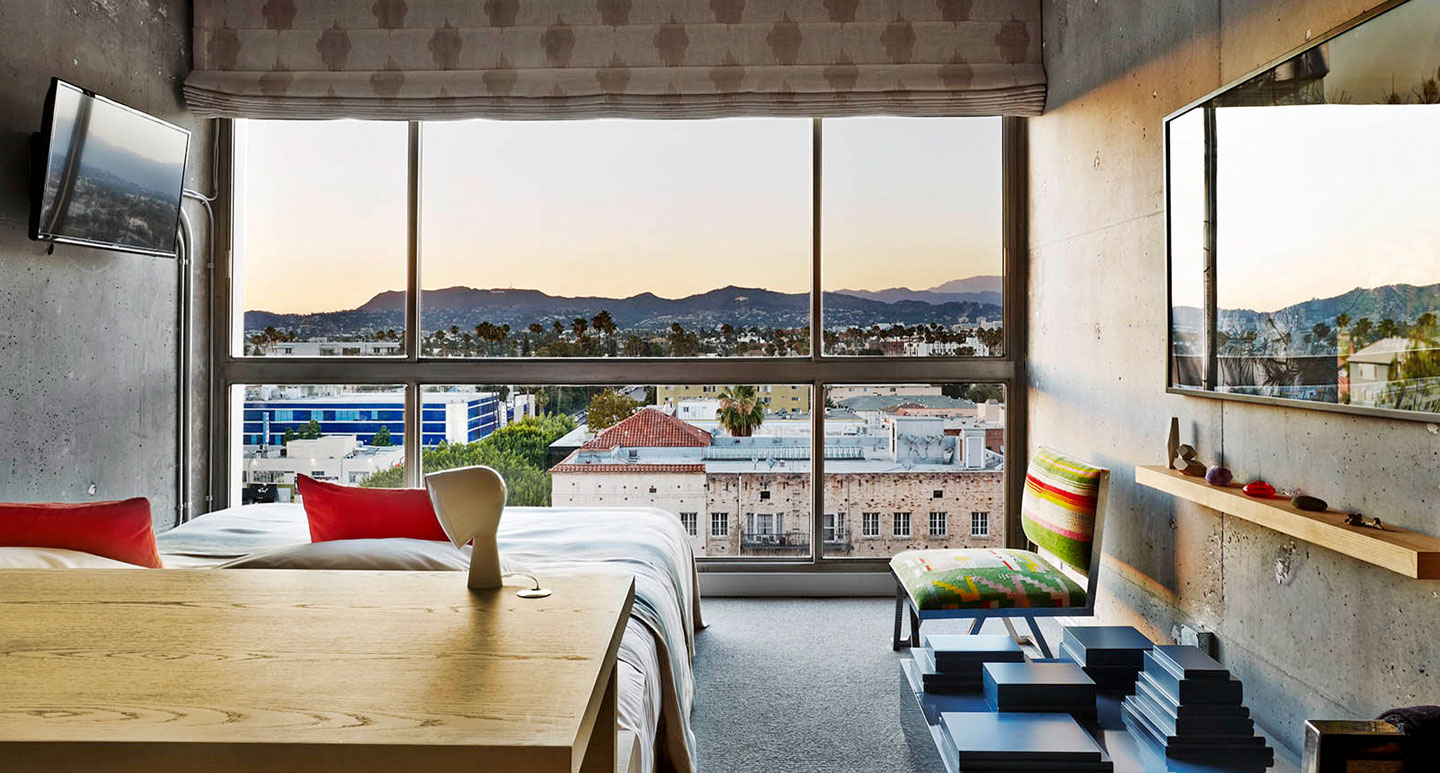 When the LINE Hotel first opened, in its iconic modernist tower on Wilshire Boulevard, it instantly put the downtown-adjacent Koreatown neighborhood on the map for travelers who might ordinarily have looked elsewhere. It also put the brand-new LINE brand on the map, and raised the profile of the Sydell Group. Now, it’s a fixture on the Los Angeles boutique-hotel landscape, as its stylish minimalist rooms and its buzzing public spaces have quickly become iconic. 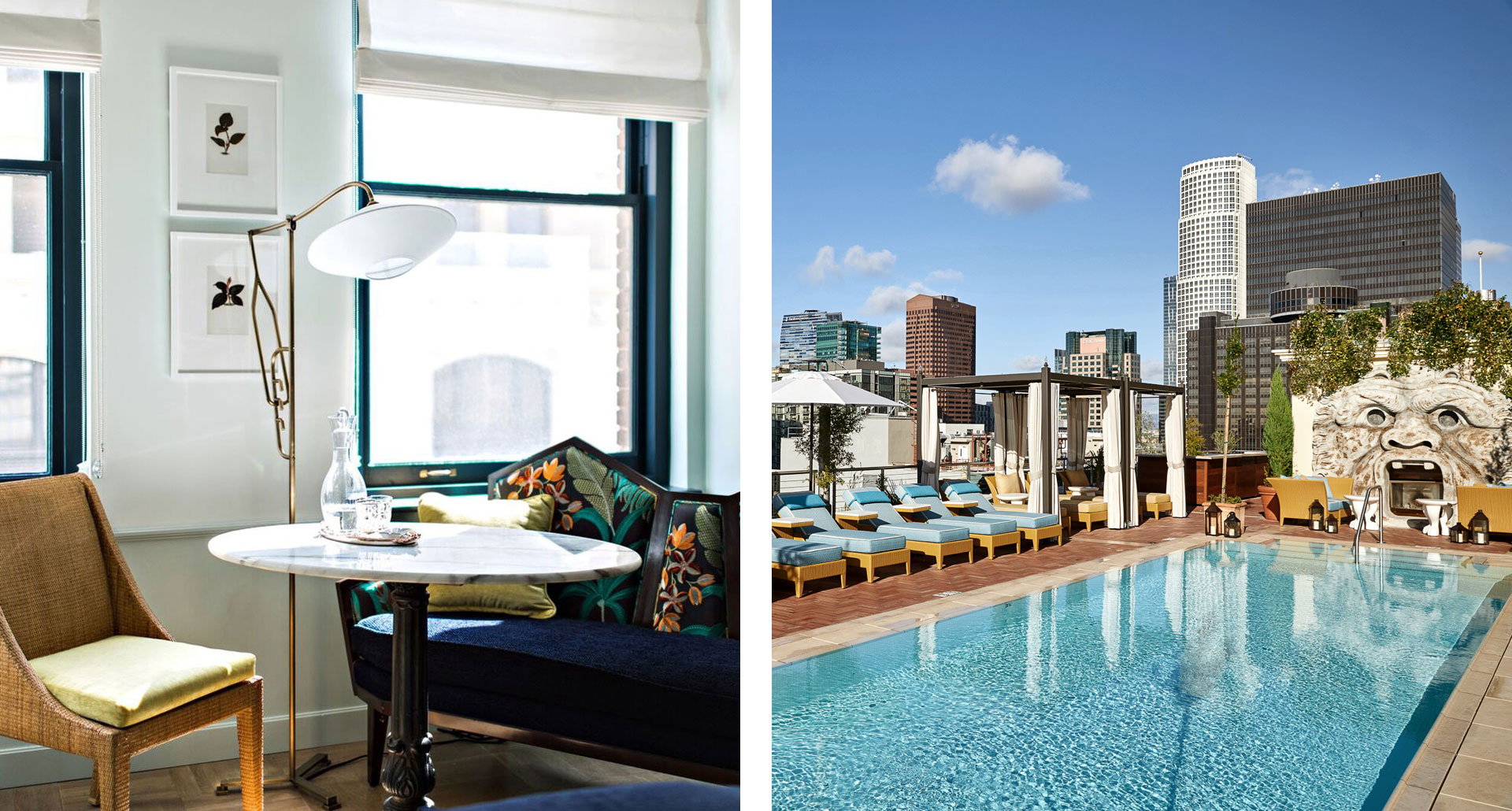 The Giannini Building is a neoclassical landmark that once contained the Bank of Italy, and the Art Deco lobby is unapologetically grand, a soaring two-story space under an ornate gold-and-blue ceiling. The restaurant and bar span the ground floor while the mezzanine level doubles as a formal dining room. Meanwhile the rooftop features a café, a cocktail bar, and a pool deck, all with views of the Downtown skyline. And then there are the rooms, which find Jacques Garcia’s throwback Parisian-inflected style looking fine under the Southern California sun. 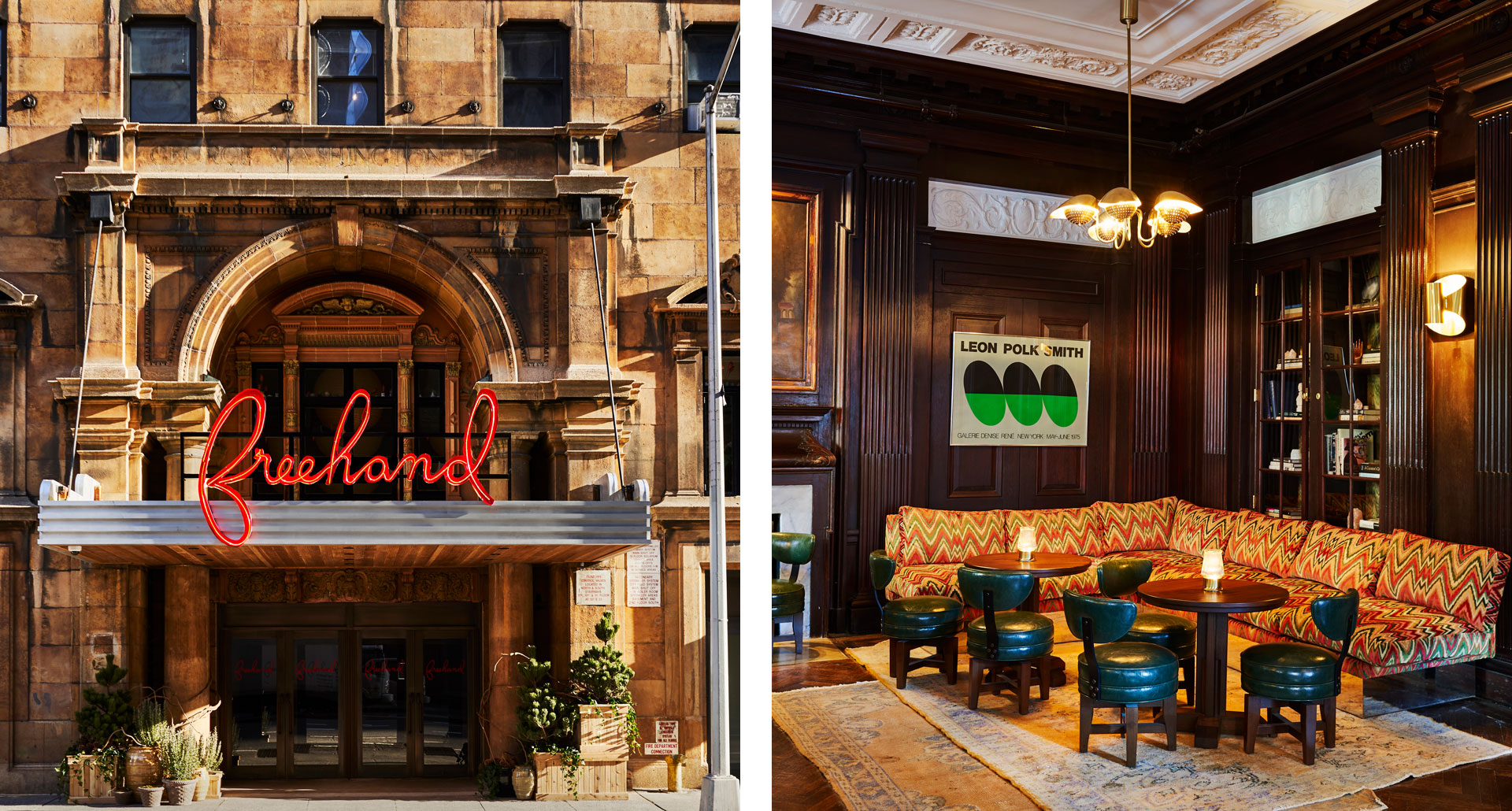 While New York’s got no shortage of very fine luxury hotels, what it hasn’t got is a surplus of hotels that are both stylish and affordable. The Freehand hotels are aimed at travelers with exceptional taste, not necessarily unlimited budgets — and in the Freehand New York they’ve succeeded where many an attempt has failed, thwarted by the daunting arithmetic of the Manhattan real-estate market. Inside, Roman & Williams’ eclectic, retro-inspired style turns what was once a humble residential hotel into something much livelier and more livable. 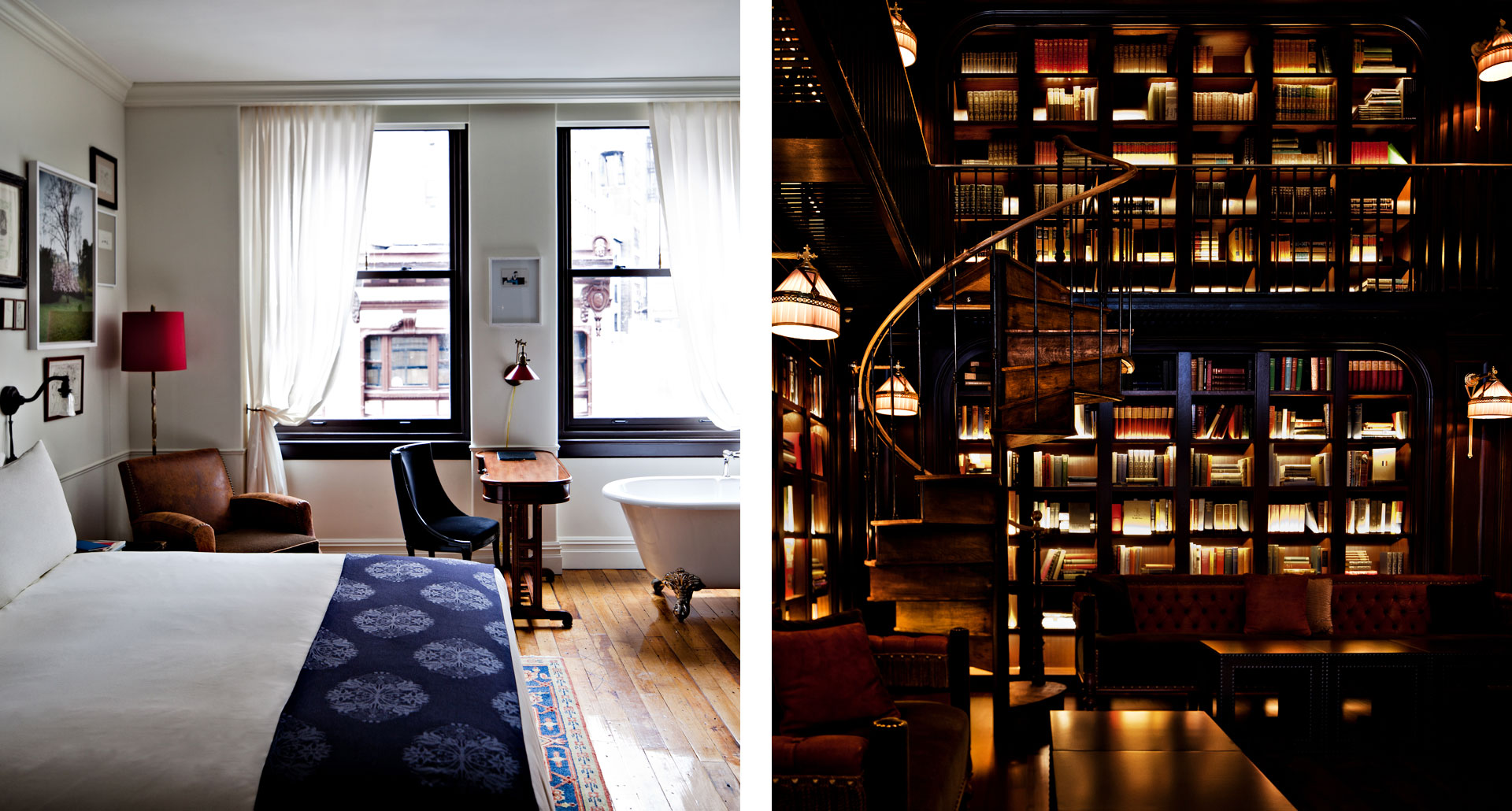 That stray capital M is a nod to the neighborhood; fairly recently a no-man’s-land, the district North of Madison Park is a Manhattan renewal success story in the making, and with the arrival of the NoMad Hotel it’s moving up a notch or two on the luxury scale. There’s a pronounced European accent to what’s got to be the most Haussmannian building on Broadway — and of course the architectural ministrations of the Parisian designer Jacques Garcia only intensify the effect. 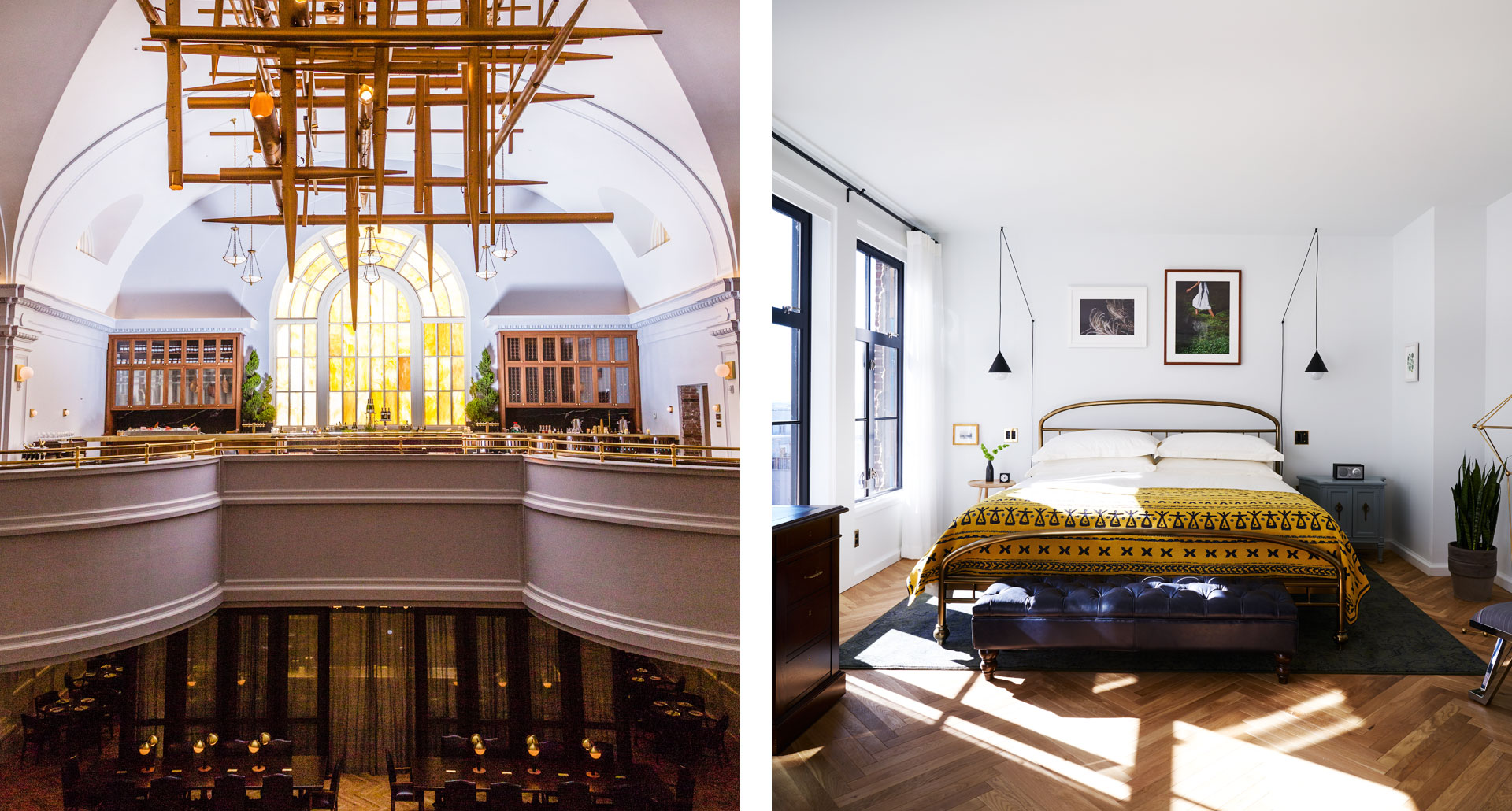 When in Rome, do as the Romans do. In Los Angeles, the LINE put a thoroughly contemporary design spin on a mid-century hotel building in the newly hip neighborhood of Koreatown, and made it into a culinary destination with help from local hero Roy Choi. The LINE DC Hotel translates this concept into a language Washington understands: a century-old church in Adams Morgan provides the venue for a boutique hotel in an of-the-moment bohemian-eclectic style, complete with restaurant offerings from two James Beard–recognized chefs, Baltimore’s Spike Gjerde and DC’s own Erik Bruner-Yang. 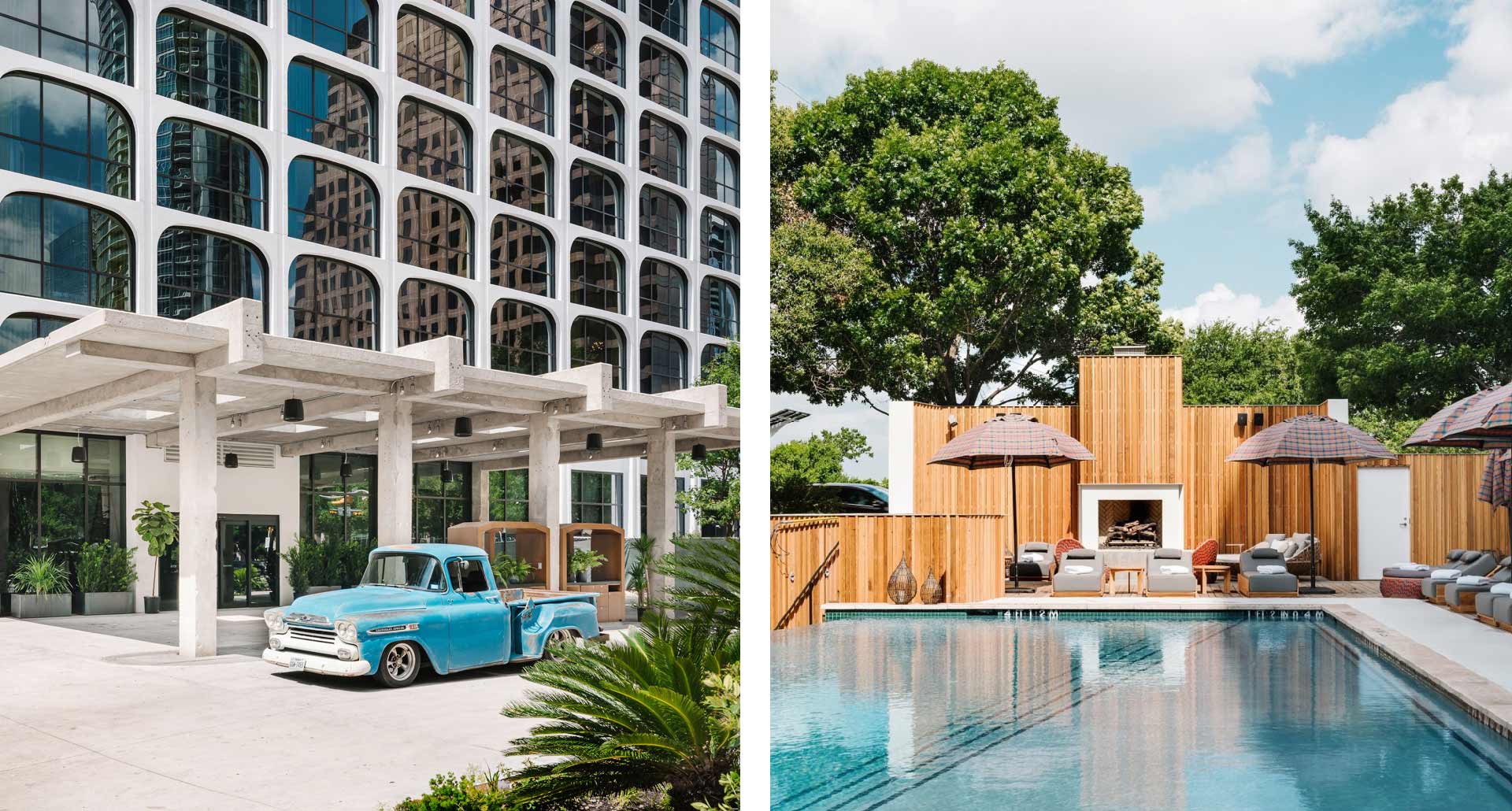 The Sydell Group’s third LINE Hotel once again transforms a faded mid-century chain hotel into a hip and contemporary boutique hotel, this time in Austin, Texas, on the shores of Lady Bird Lake. To be fair, the old Crest Inn’s exterior has more than a little bit of retro appeal — but it’s thanks to architect Michael Hsu and designer Sean Knibb that the LINE Austin is as stylish as it is today, mixing classic modernism and industrial-chic textures with some subtle nods to the geography and geology of Austin and the surrounding Hill Country. 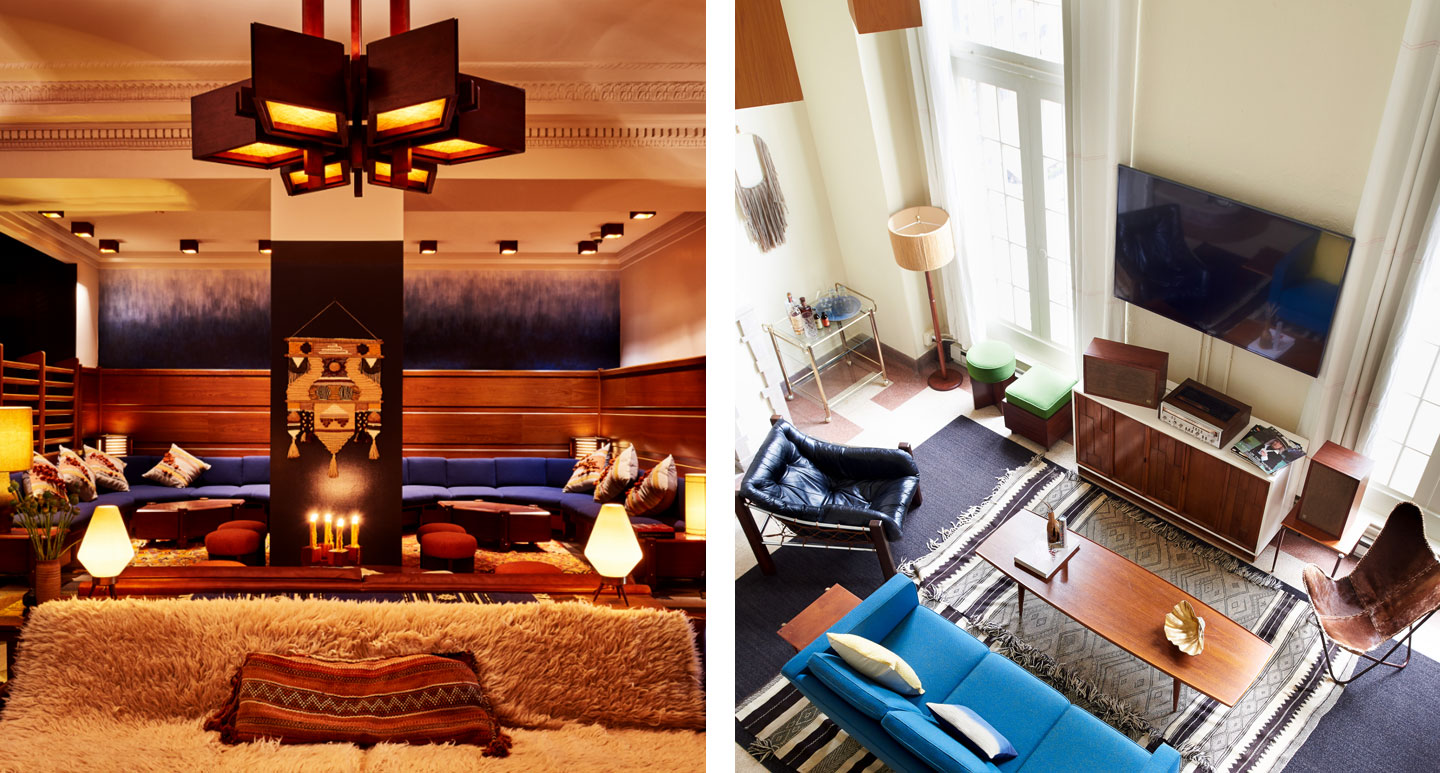 Part hotel, part hostel, the Freehand hotels pitch themselves at the tiny intersection of style and affordability. They’re not the only ones — but the reason we’re writing about them is that they manage to hit the mark. Of course, it helps when you’ve got designers of Roman and Williams’ caliber in your corner. They’re responsible for youth-market classics like the Ace Hotel New York and the Standard High Line, and here they’ve turned what used to be the Tokyo Hotel, in the River North neighborhood, into Freehand Chicago, a slightly upscale evolution of the Freehand concept. 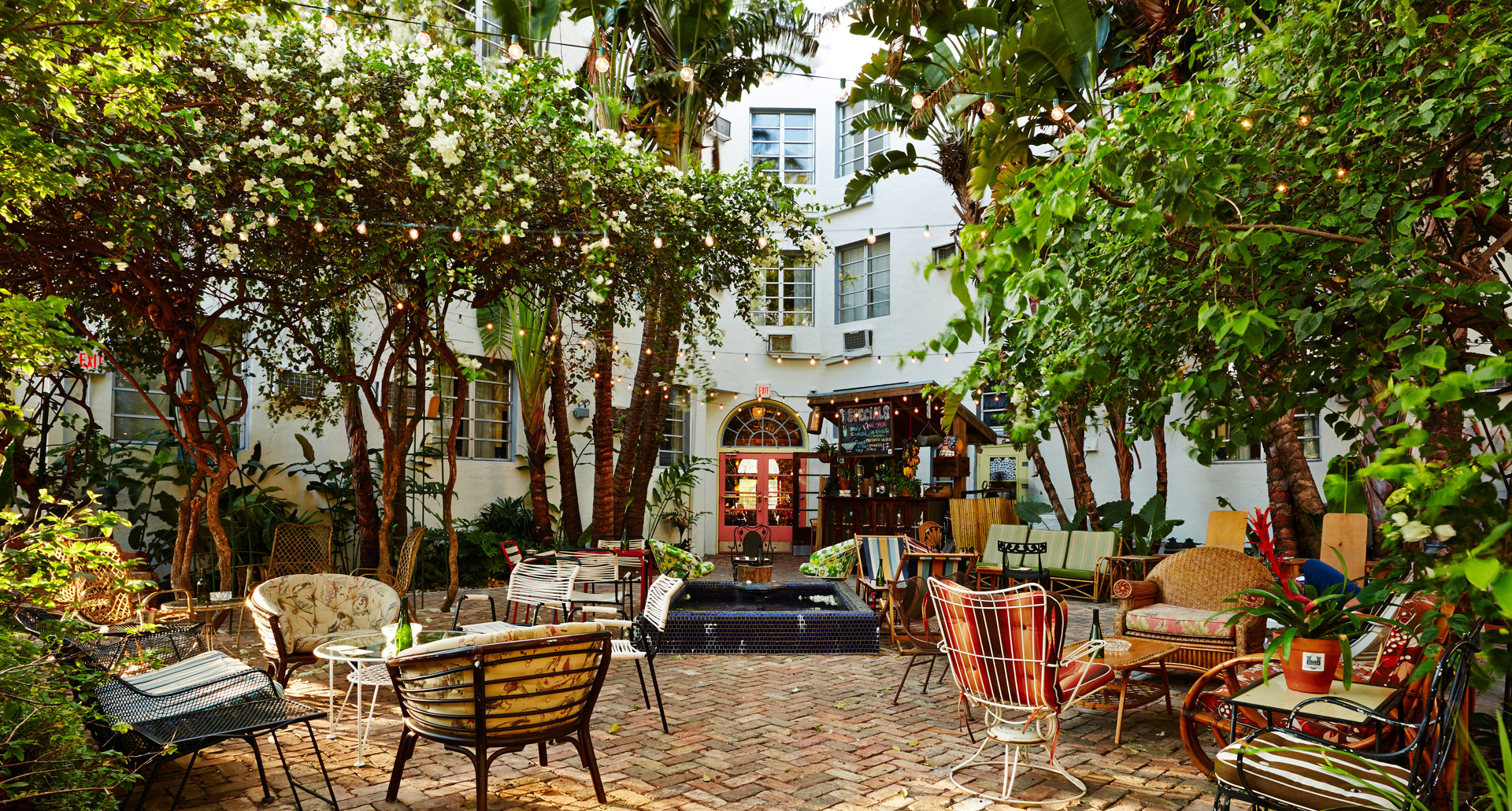 We don’t tend to place an enormous amount of importance on fine linguistic distinctions. Why get caught up in arguing about whether Freehand Miami is a high-end hostel or a back-to-basics boutique hotel when you could be out there enjoying the place instead? It’s probably enough simply to mention that it’s possible to see it both ways — though it’s surrounded by stratospherically luxurious South Beach hotels, Freehand is in most anyone’s league when it comes to funky style and fun atmosphere, and at a fraction of the price. 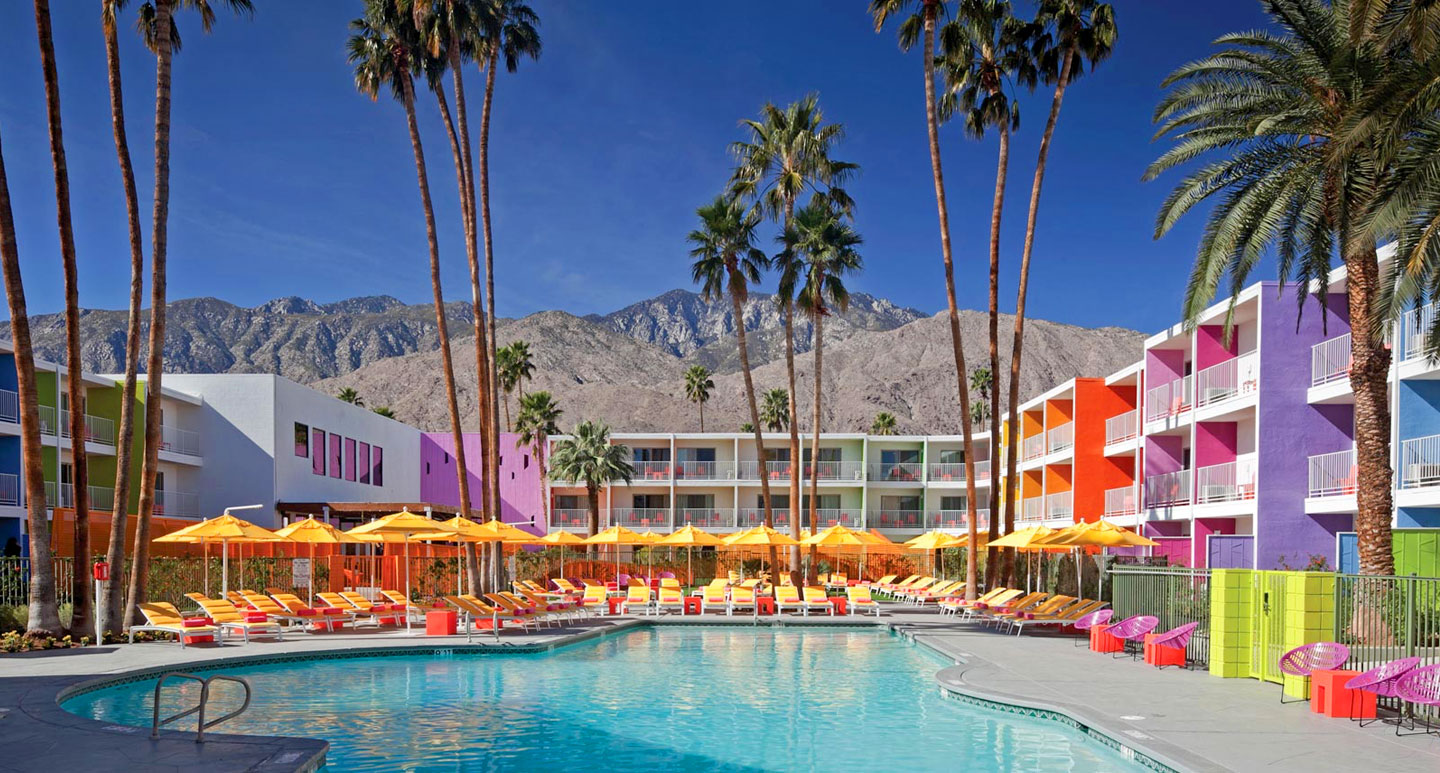 In a few short years Palm Springs has gone from nostalgia act to youth movement — while it’s still got loads of mid-century appeal, it’s expanded its demographics quite a bit, including a clientele that wasn’t born yet the last time Palm Springs was hip. This, not incidentally, is more or less the mission of the Saguaro Palm Springs: boutique style with a broad appeal, hip but never alienating. It’s a more youthful, more vibrant take on a classic California desert destination, and its 249 colorful rooms are a welcome addition to the south side of Palm Springs. 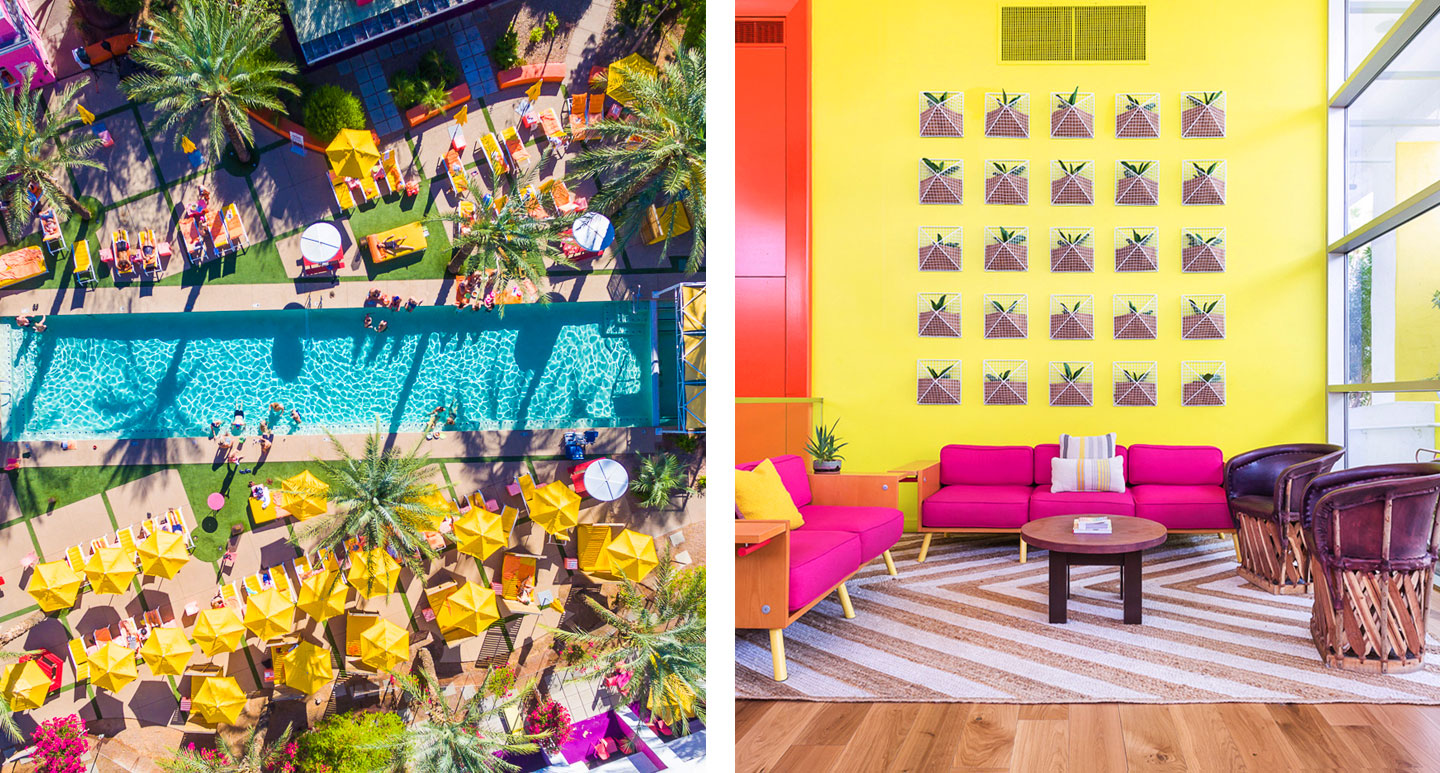 There’s more out West than California, we’re relieved to report, and much to recommend the Phoenix area in particular — here, boutique hoteliers have been busy honing a balanced, spacious boutique vision for quite some time. It’s a vision that’s perhaps less nakedly aspirational than the original Schrager model, where nightlife ruled the roost, and more inclined to the accessibly upscale. As such, in the form of the Saguaro, it’s pretty much exactly the sort of thing Scottsdale needs.

Formerly the headquarters of the venerable Midland bank, and more recently HSBC, the landmark building at No. 27 Poultry never lacked for atmosphere. But with the bank itself departed for points east, this Edwin Luytens original has been put to better use as a Soho House–style members’ club and luxury boutique hotel. The Ned, in fact, is more than a conceptual kin; it’s a partnership between Soho House and the Sydell group. With a pedigree like that — and raw materials like this Grade I listed bank building — it’s no surprise that the end product is an impressive one.