It’s no secret that Tablet is all about hotels, but even we know that a hotel is no substitute for a home. And we’re certainly not too proud to admit that many of the coolest and most comforting features found in hotels are inspired by elements originally executed in the world’s great houses.

With that in mind, we’ve decided to pay tribute to the forms that inform so much of what we do. We’ve selected sixteen residences that were designed by some of the most influential Modernist architects of the 20th century. The focus on Modernism is not random — the clean and uncluttered style is a popular design choice for hotels, offering a tidy minimalism that appeals to guests and management alike.

Pair these homes with our selection of 16 Modernism-Inspired Hotels, so you can experience the style for yourself. 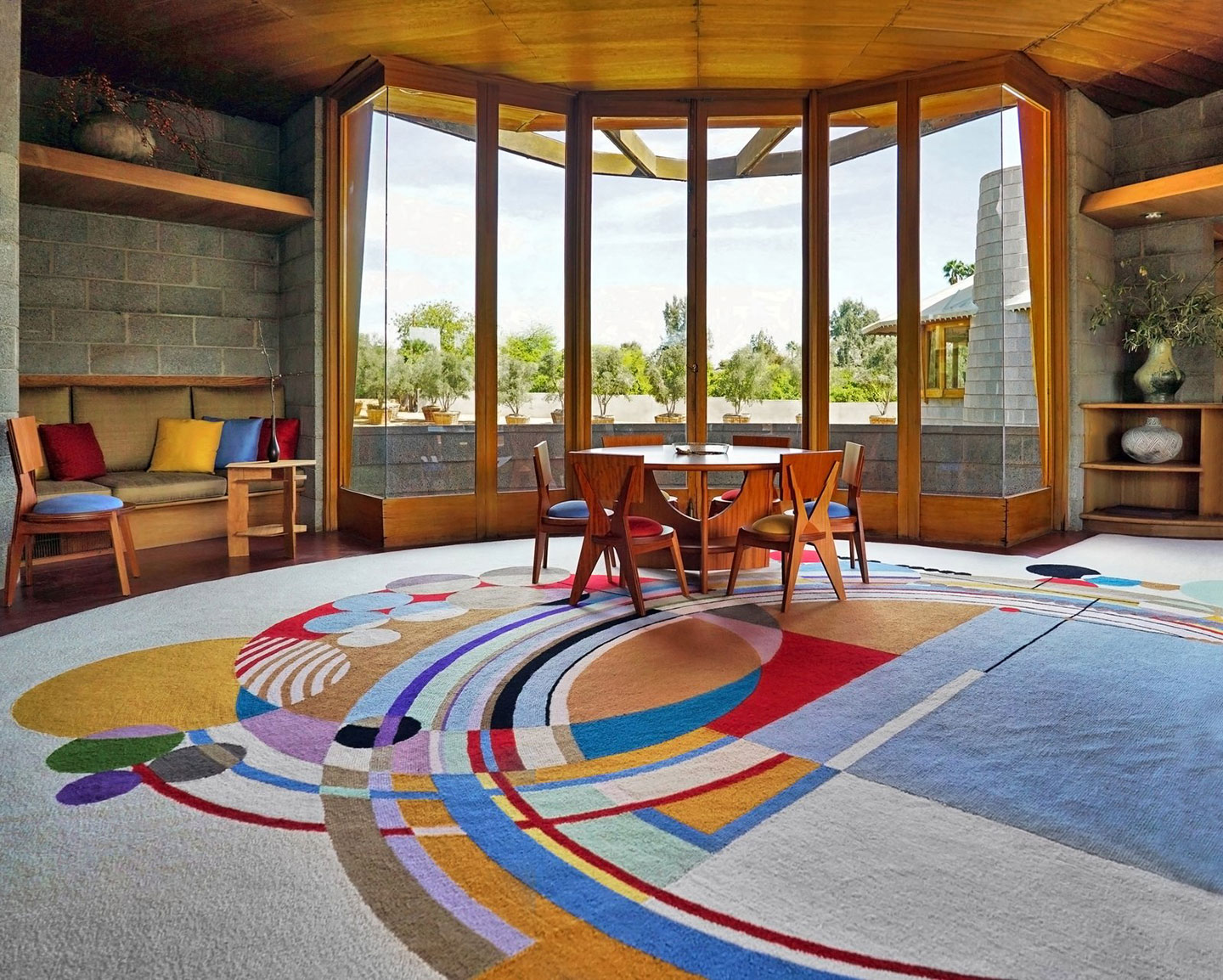 In 1952, Frank Lloyd Wright built this concrete-block home in the Arcadia neighborhood of Phoenix, Arizona, for his son, David, and daughter-in-law, Gladys. Set in an orange grove, the circular home features sweeping views of the Camelback Mountains, a central courtyard, Wright’s bright and cheerful “March Balloons” carpet, and a cantilevered spiral walk-up design — an early example of the iconic architect’s later style. 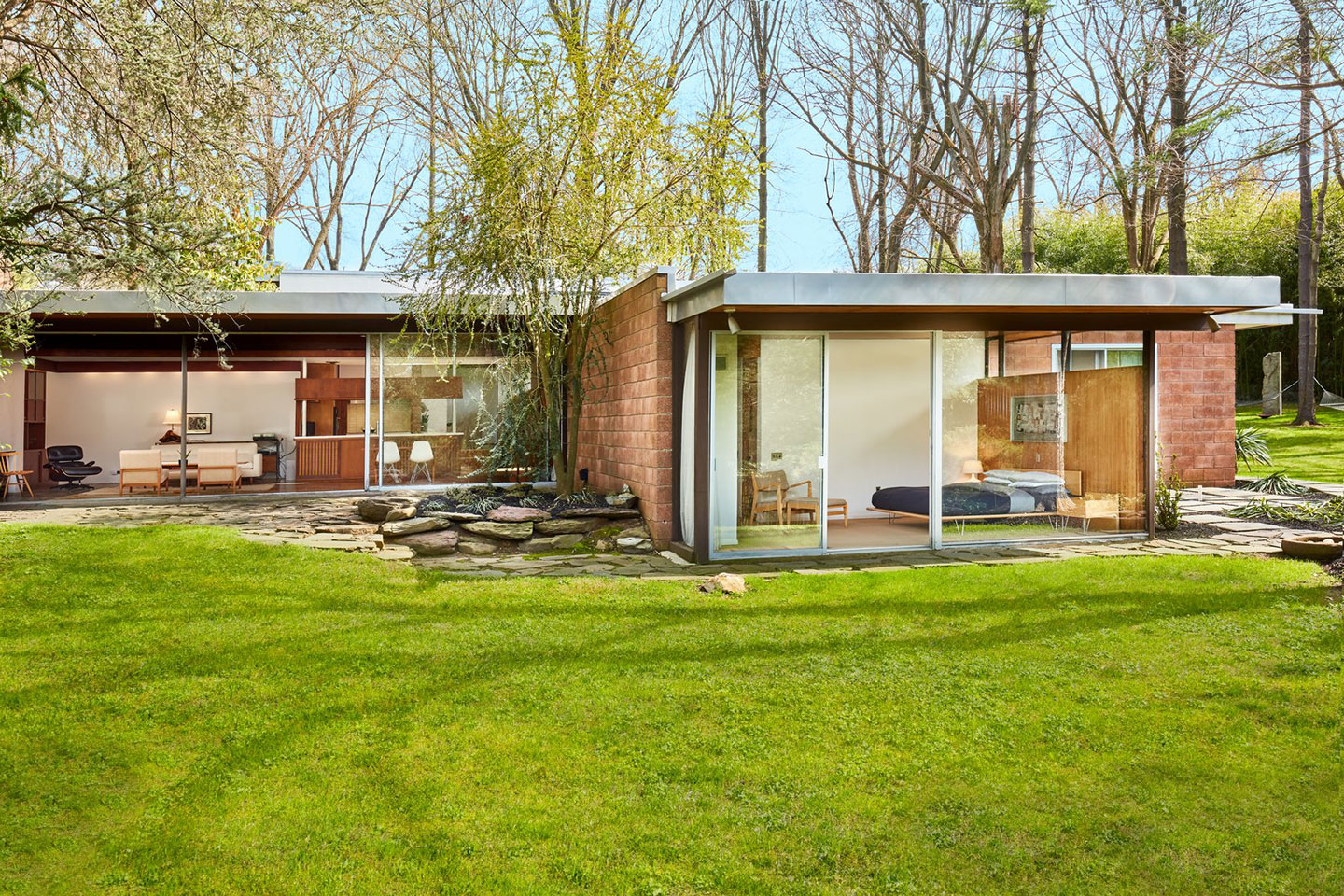 One of the few homes on the East Coast designed by Richard Neutra, the Hassrick Residence was originally built in 1958 in the International Style. It presents a modest facade, while the interior embraces the outdoors through a 40-foot sliding glass wall. Other Neutra signatures include the tongue-and-groove ceilings, open kitchen, and commanding fireplace.

The Miller House — Columbus, IN 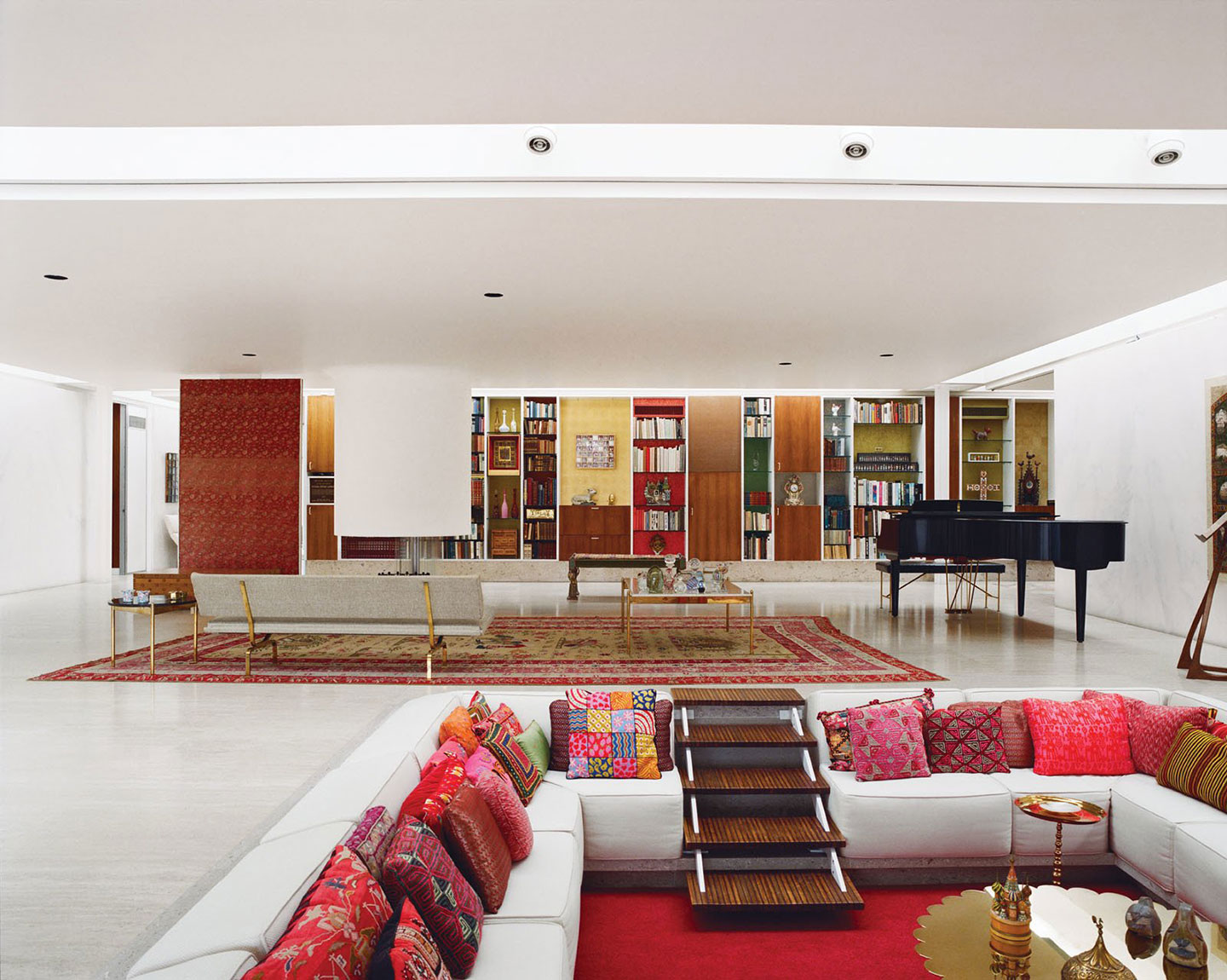 In 1952, the industrialist J. Irwin Miller and his wife, Xenia, commissioned this remarkable house in Columbus, Indiana. Eero Saarinen designed the building, and Alexander Girard masterminded the interiors, which include what is perhaps the world’s most famous sunken living room/conversation pit. 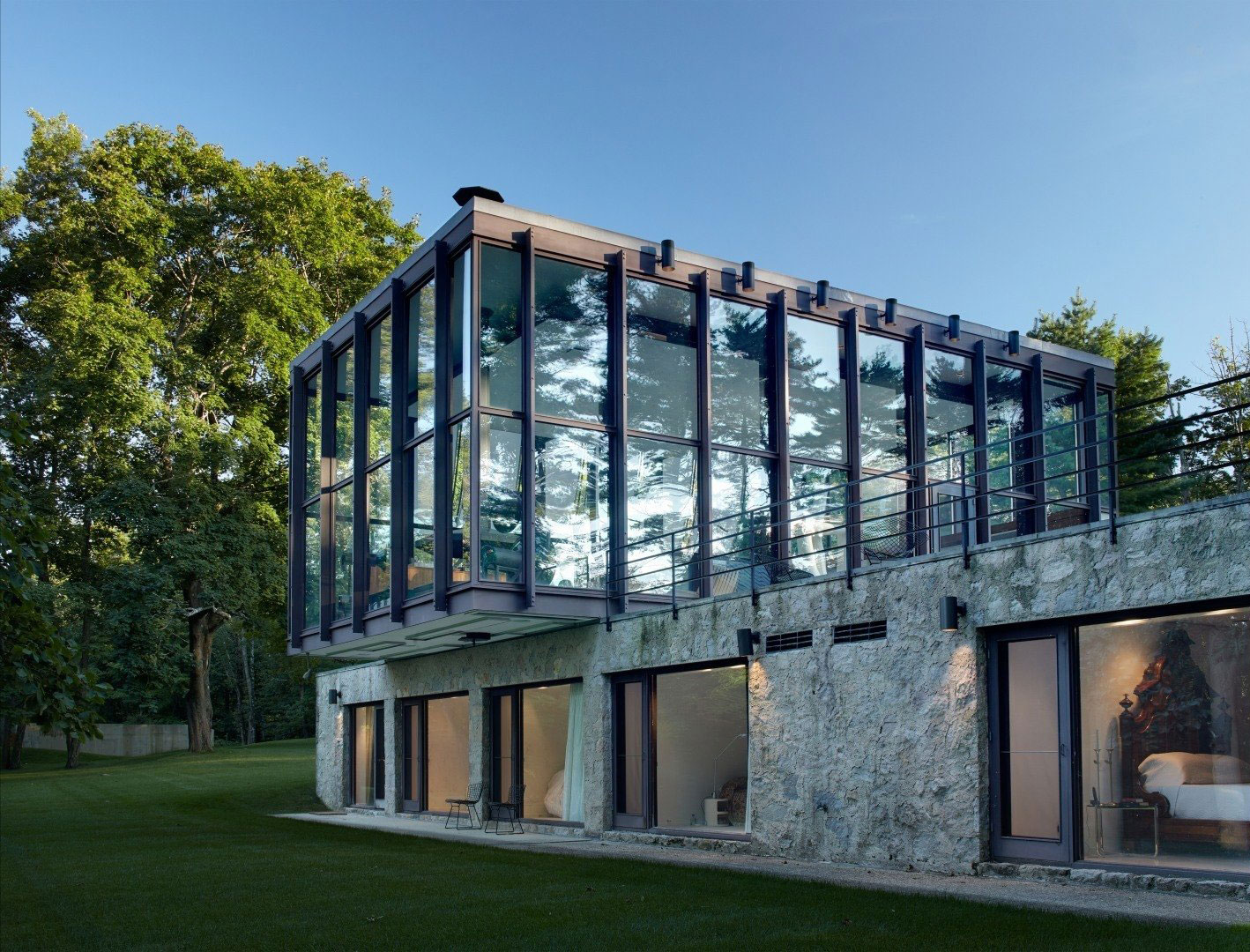 Johnson built the Wiley House at a time when the midcentury movement was booming, especially in New Canaan. While more and more architects were beginning to build minimal structures that fit into the surrounding nature, his second glass pavilion-style house was born. Unlike the Glass House, which has become a cherished relic, this home has endured through multiple life stages and has had to adapt over time. 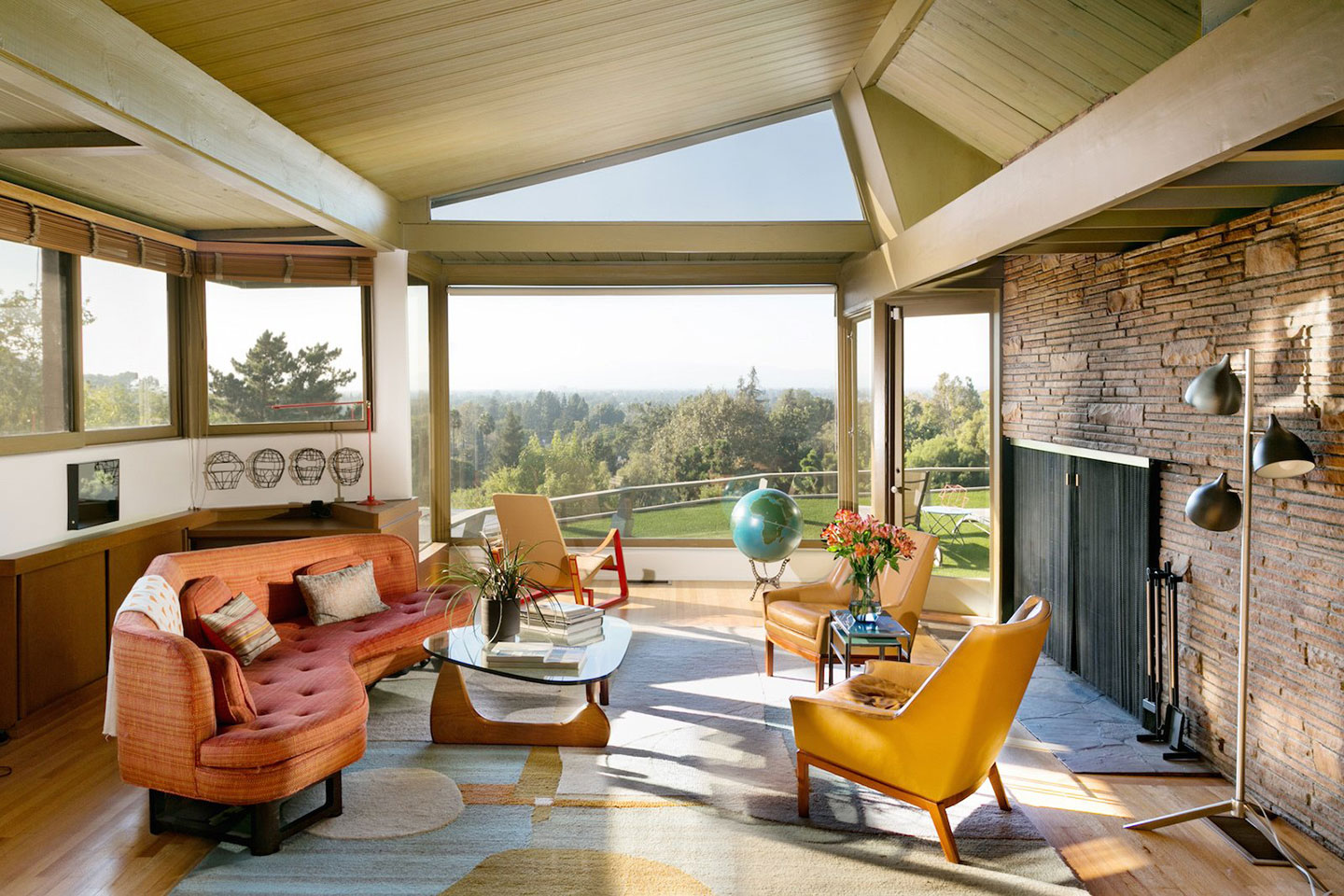 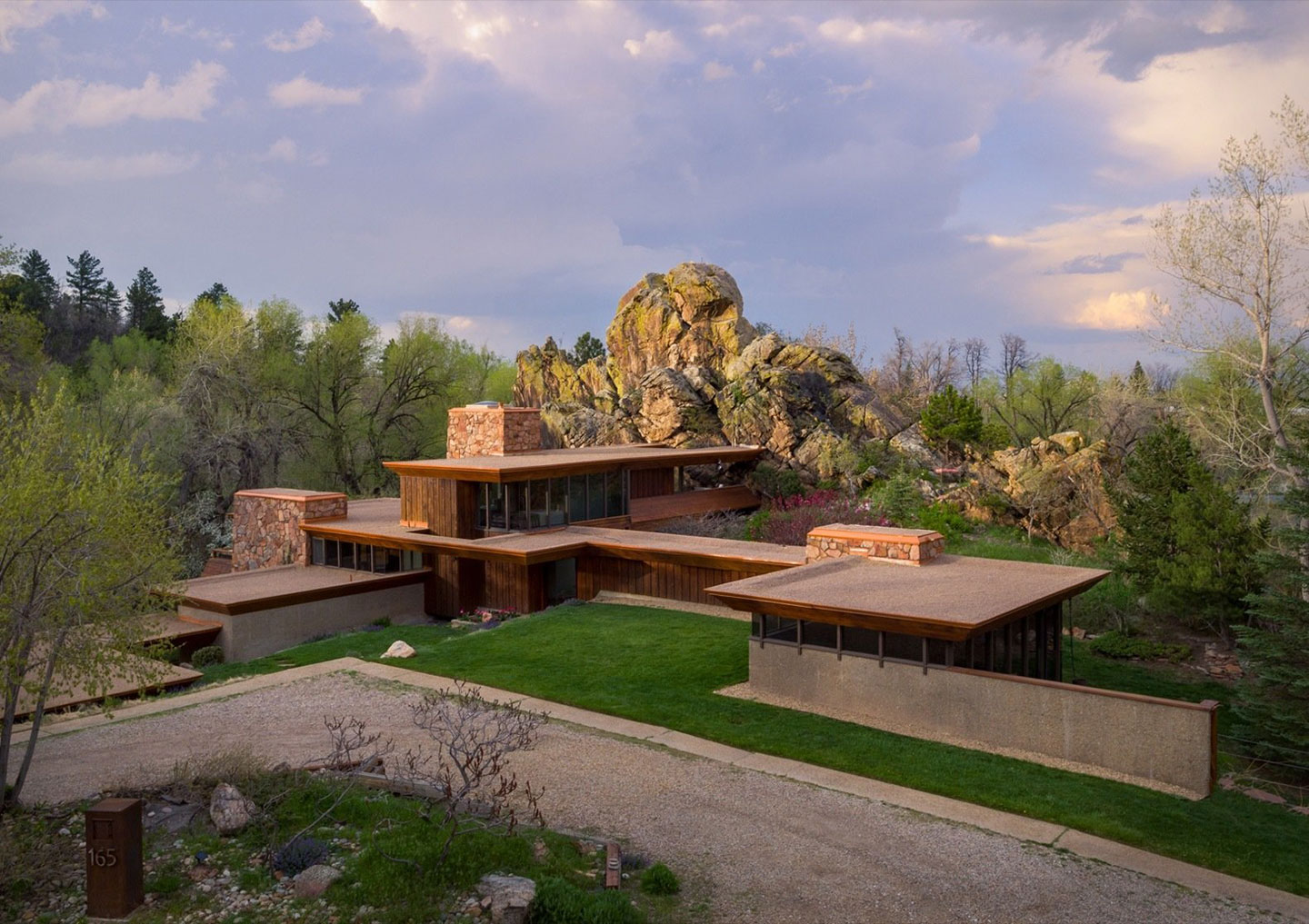 Located just outside city limits in Boulder’s exclusive Knollwood neighborhood, this rare 5,780-square-foot property has earned its legendary reputation from the home’s seamless integration with Gyp Rock, a natural rock formation that looms large on the 1.1-acre site. Haertling masterfully matched the four-story home to the boulder’s three peaks and used a natural material palette to reinforce ties with the landscape. 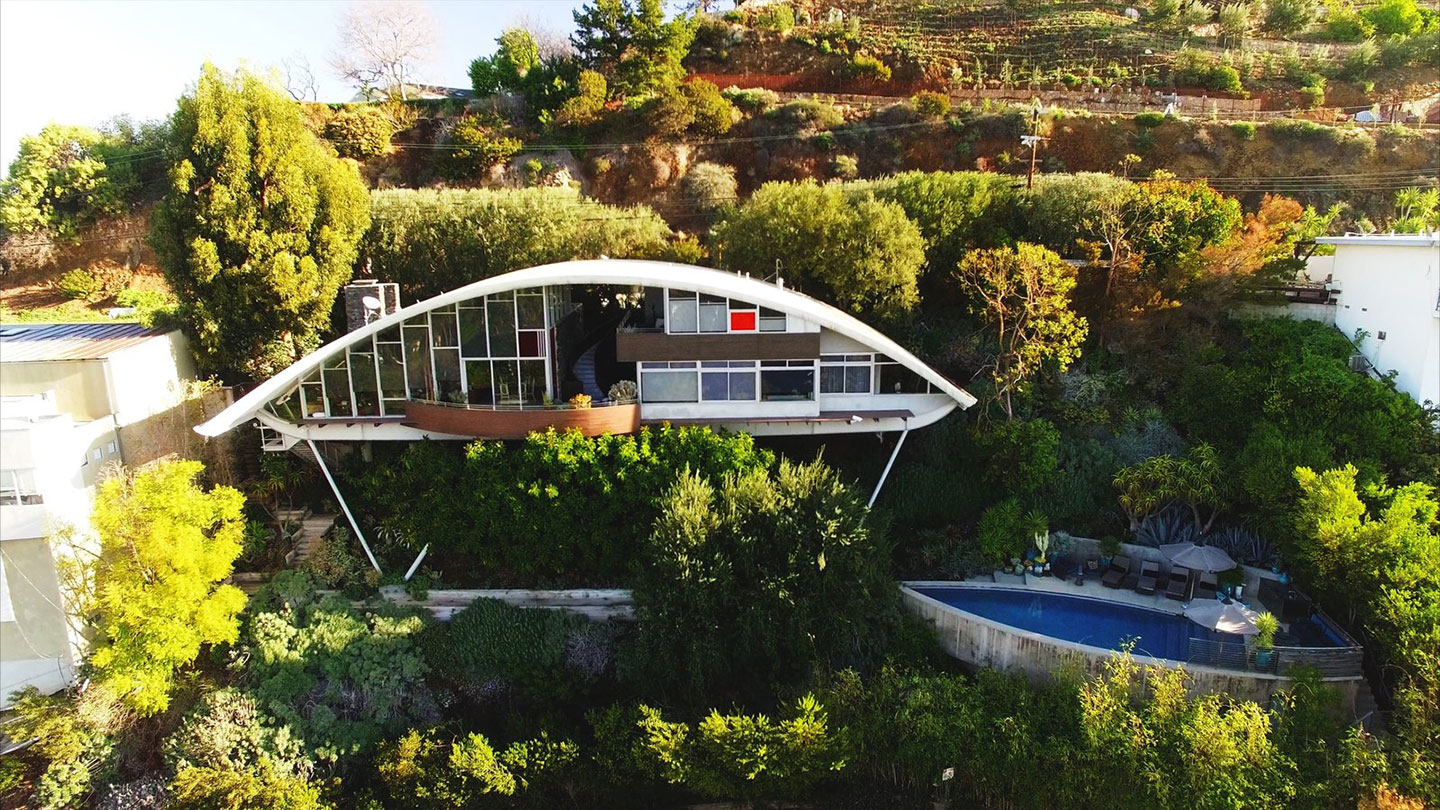 In 1962, Lautner designed this home in the Hollywood Hills for Russell Garcia, a composer, arranger, and conductor who had written a number of well-known film scores. Over the course of two years, he built an arched two-part structure that would allow Garcia to do his music work on one side of the house without disturbing anyone on the other side of the house. 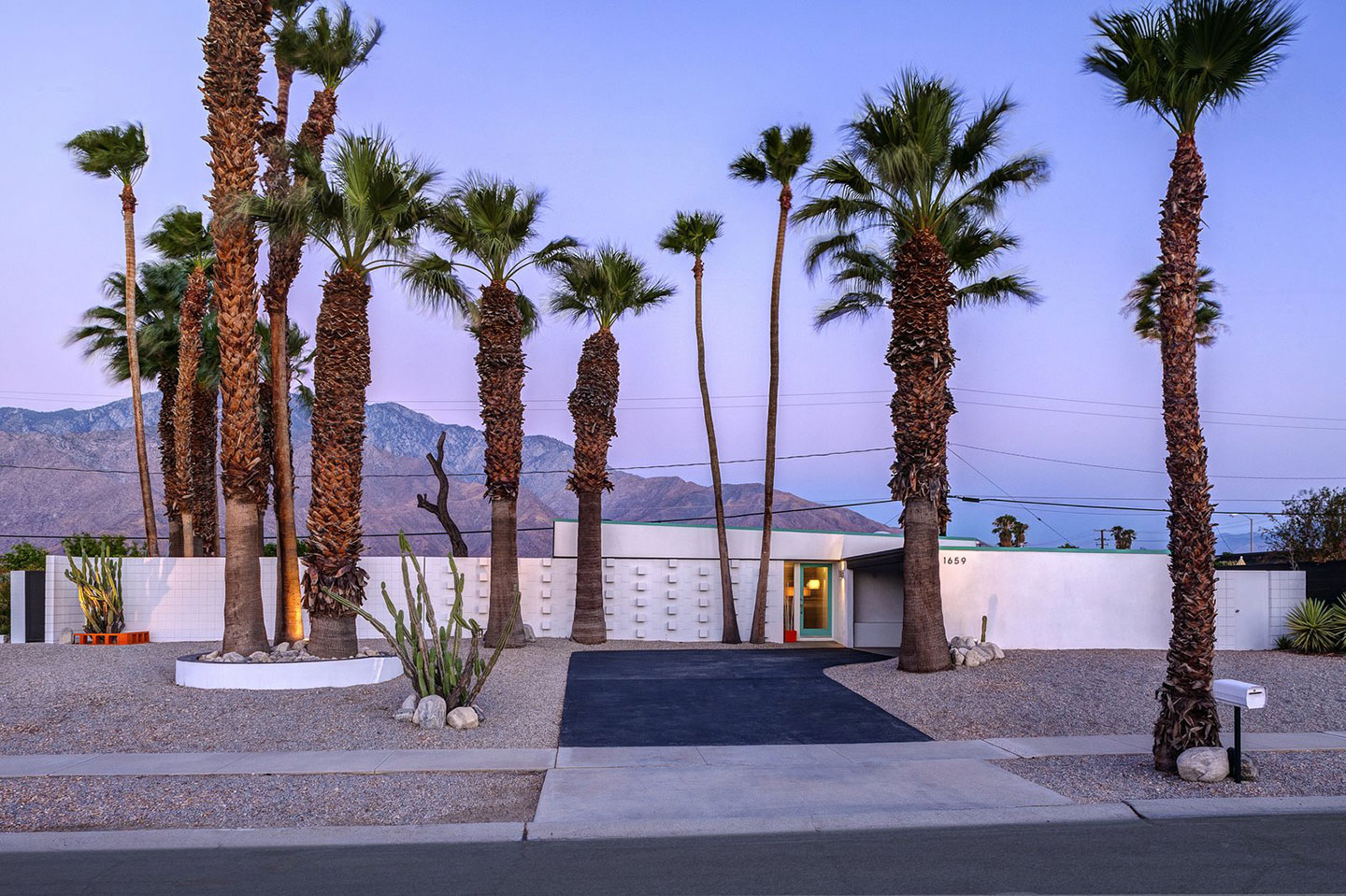 Architect Donald Wexler (1926-2015) first moved to Palm Springs in 1952, where the then-empty stretches of harsh desert terrain inspired him to build minimalist, steel houses that would come to define the Coachella Valley. In the early 1960s, Wexler teamed up with Richard Harrison to launch their first residential subdivision in the city, the El Rancho Vista Estates. This Casablanca floor plan model is a classic example of desert modernism. 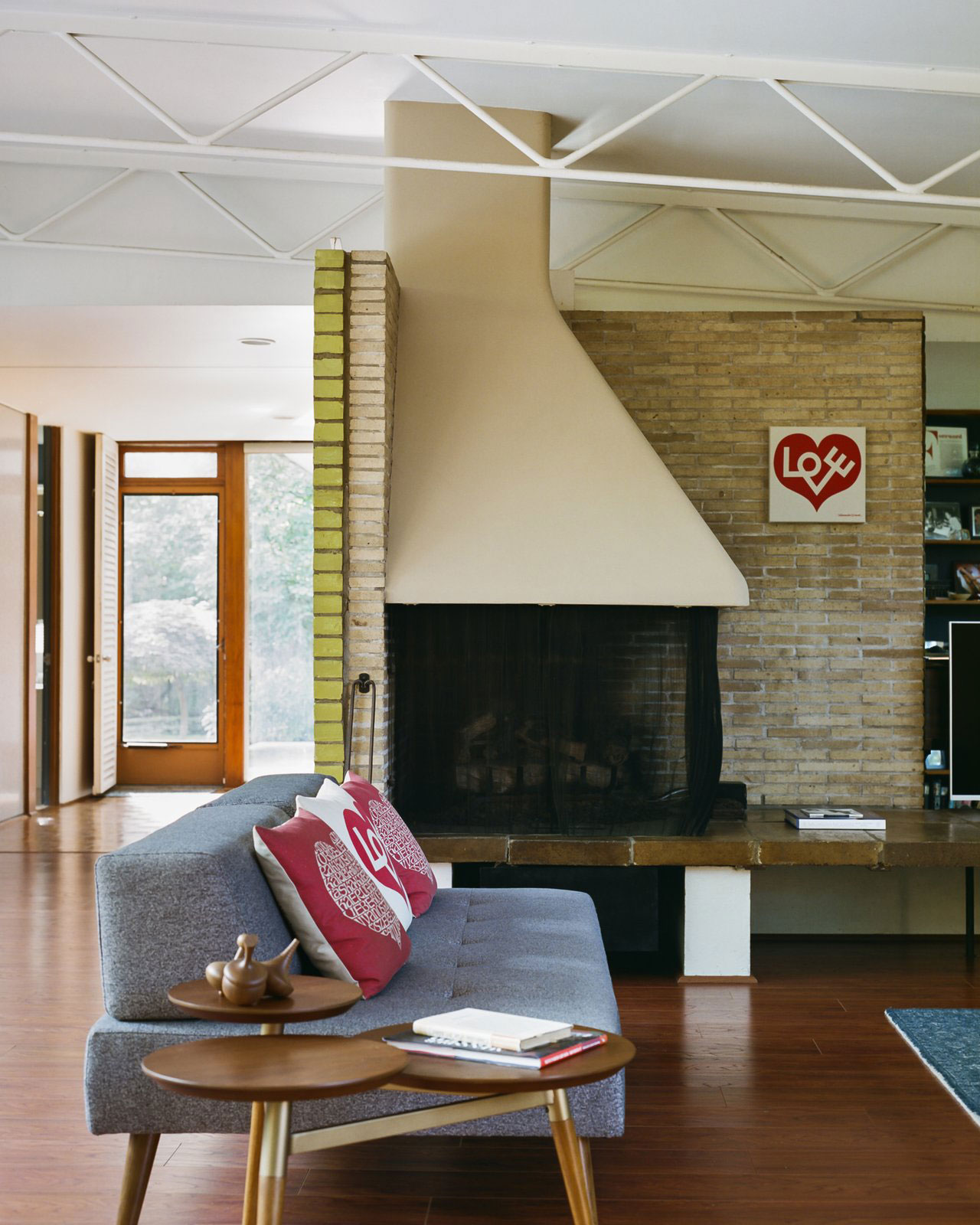 Built in 1950 for banking magnate John McLucas and his wife, this oasis is the last surviving residence designed by Alexander Girard (1907–1993), a multi-hyphenate modernist visionary who tried his hand at virtually everything. Girard made his name in textiles; he was recruited by Charles Eames to head Herman Miller’s textile division and led the firm away from the dour fabrics of wartime toward the lively colors and patterns of the Space Age — an instinct evident in this exciting home. 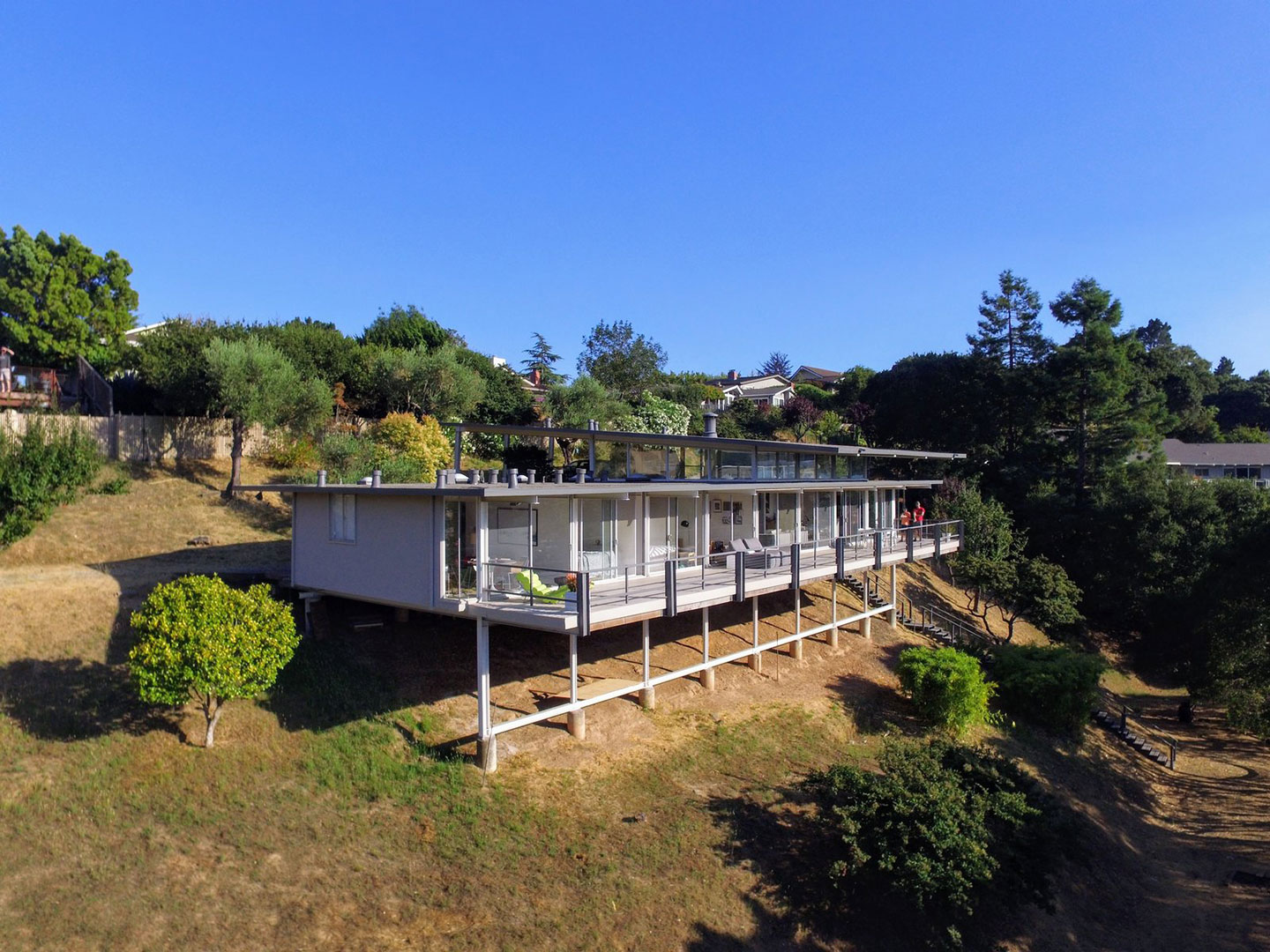 The famous Case Study homes were built between 1945 and 1966 by many of America’s greatest architects. They were commissioned by Arts & Architecture Magazine to create inexpensive and replicable model homes to accommodate the post-WWII residential housing boom in the United States. #26, also known as The Harrison House, is the only residence from the program in Northern California. 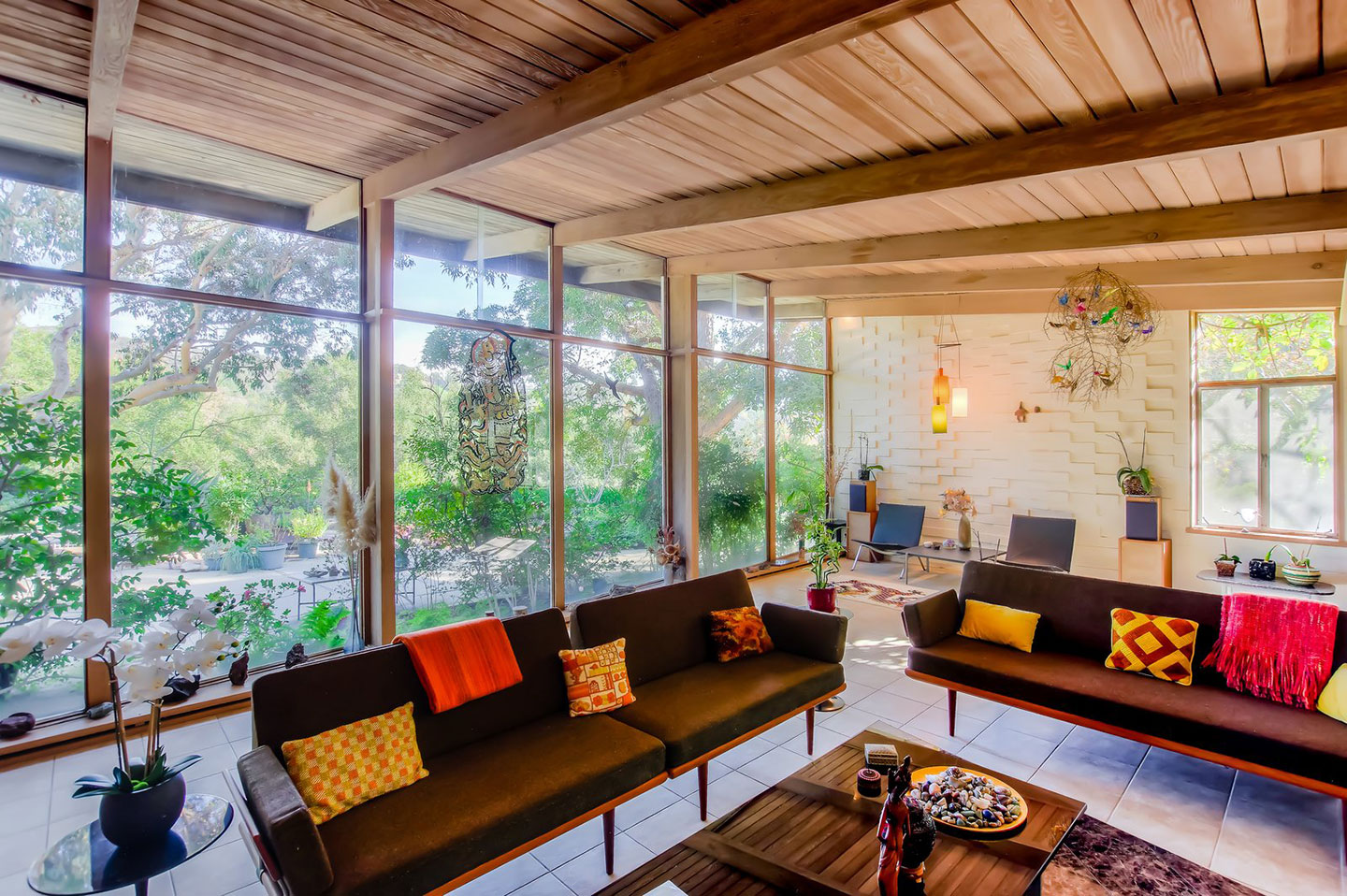 Built in 1951, the midcentury property at 2179 Mandeville Canyon is a piece of architectural history — and one of the earliest works by iconic Case Study architect Pierre Koenig. The house features period touches that include tongue-and-groove beamed ceilings, clerestory windows, wood-paneled walls, and a stone fireplace. Floor-to-ceiling windows are employed throughout the property, allowing natural light to enter and emphasizing a sense of indoor-outdoor living. 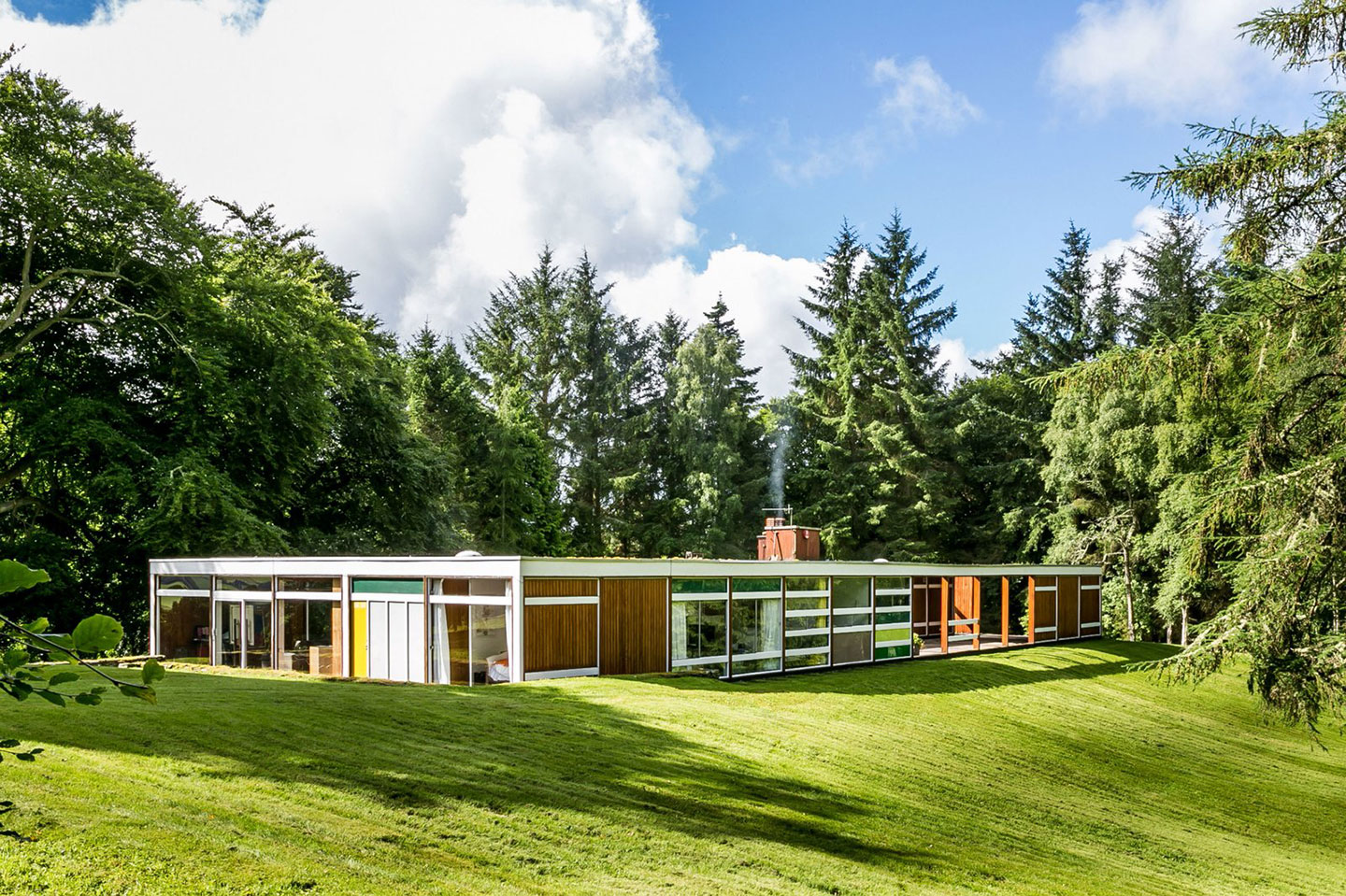 Designed by the late British architect Peter Womersley in 1957 for the celebrated textile designer Bernat Klein, this iconic, single-story home sits on an idyllic plot south of Edinburgh, Scotland. Appearing as a simple rectangular volume atop a grassy lawn and surrounded by woodlands, the geometric, modular building is simple in structural form and organization. 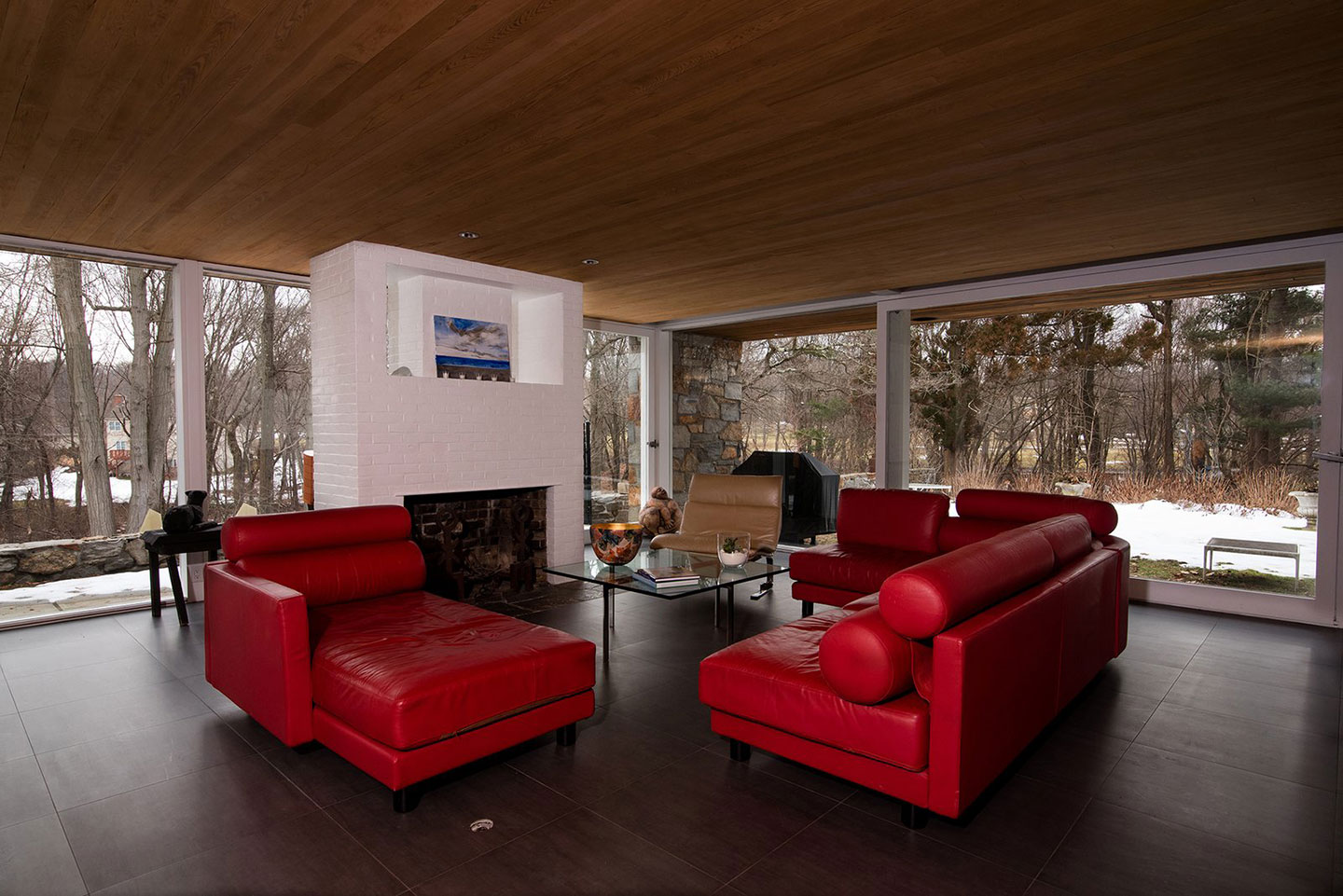 Marcel Breuer was a Bauhaus-educated architect and designer, known for his iconic tubular steel furniture and buildings such as the Brutalist Met Breuer in New York (formerly the Whitney Building). Built in 1951, this gem by the modernist master features midcentury touches such as an open fireplace, vast expanses of glass, exposed brick, and wood ceilings are evident throughout. 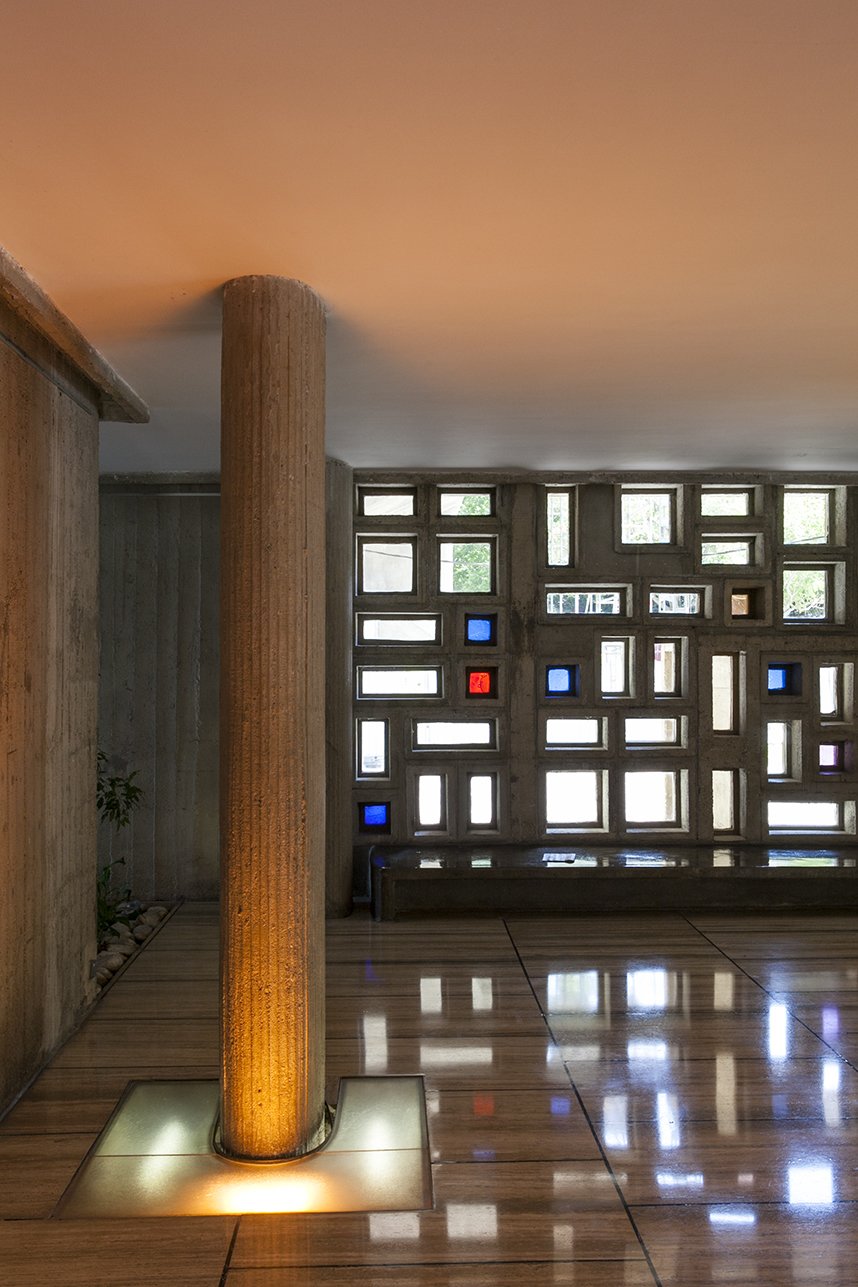 Designed and built in 1952, Unite d’Habitation (also known as Cité Radieuse) in Marseille, France, is one of Le Corbusier’s most iconic and innovative structures and was the celebrated architect’s first large-scale project. The apartment complex was commissioned as an innovative post-war housing concept. The multifunctional building focused on communal living, providing services which allowed residents to live, shop, play, and even go to school, all under one roof. 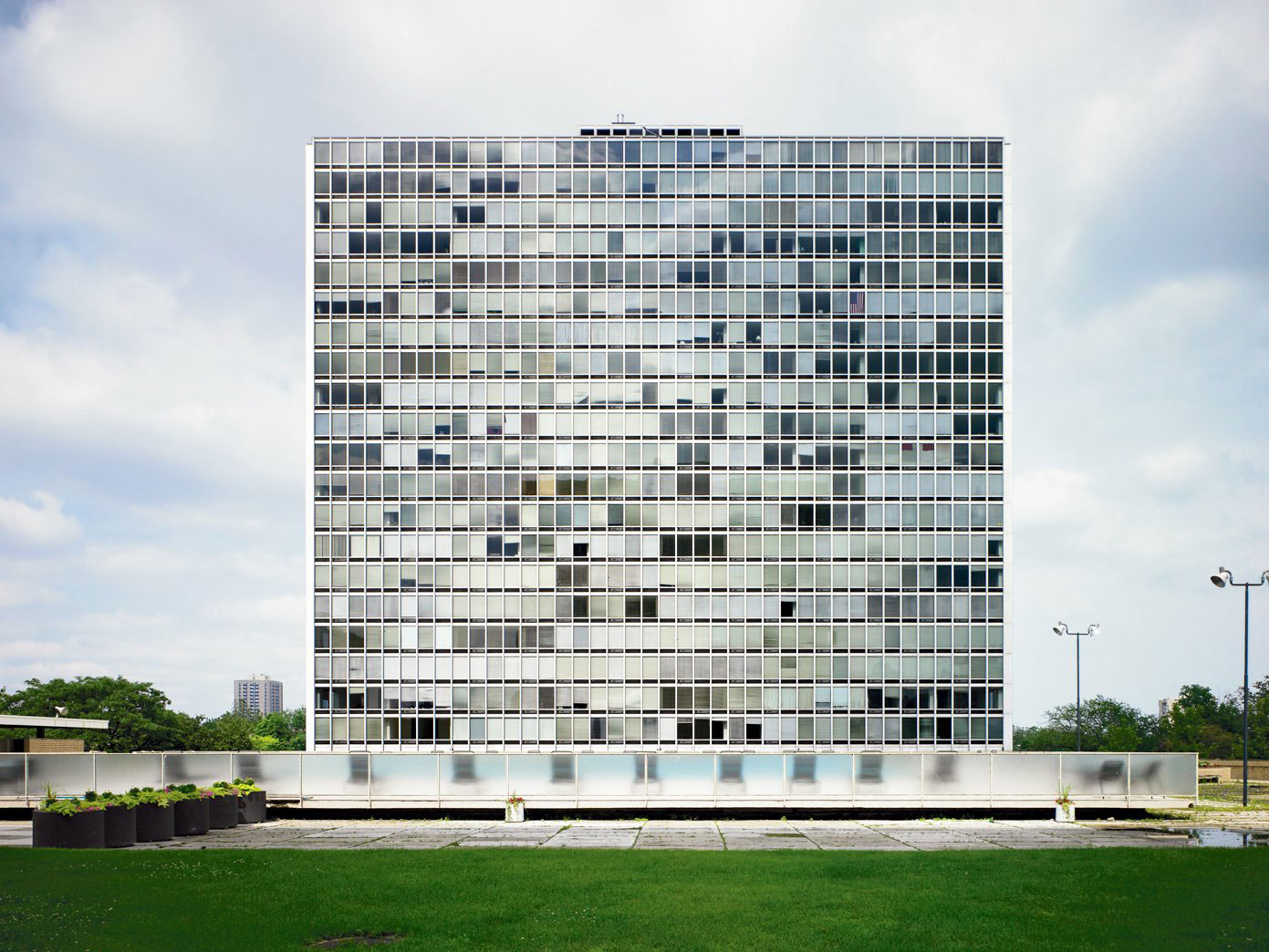 Within Detroit’s Lafayette Park you’ll find a neighborhood called the Mies van der Rohe Historic District. Constructed between 1956 and 1959, it is comprised of four components that add up to the world’s largest collection of buildings designed by the Bauhaus master. Within a sprawling city that has suffered near-disastrous decline, this racially and economically diverse enclave just northeast of downtown has not only aged gracefully but today flourishes with new life. 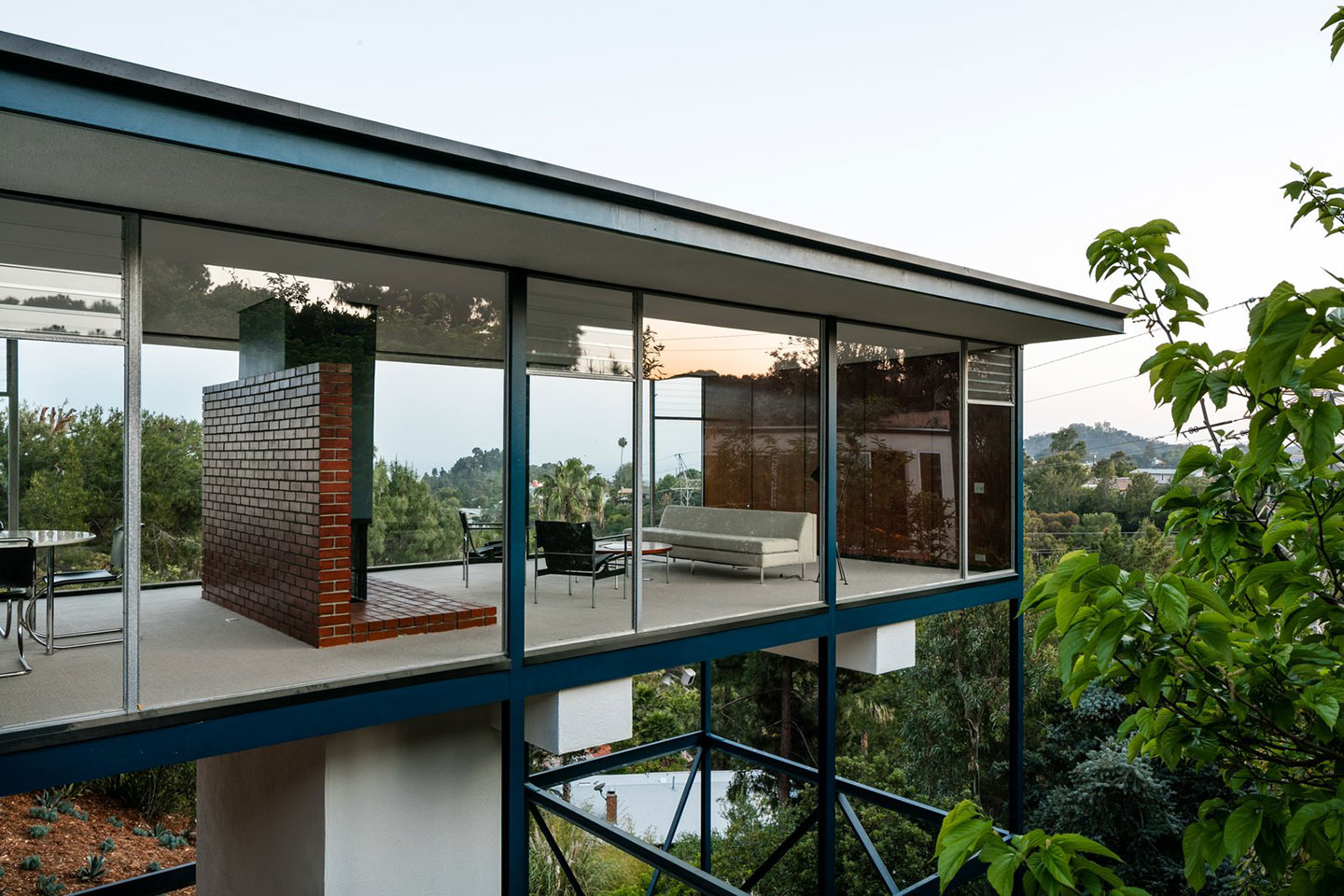 Originally constructed in 1958 by influential modernist architect Craig Ellwood, the Smith House was restored in 2018 under the guidance of James Tyler, FAIA. A showcase of midcentury modern architecture, the Smith House is located in Crestwood Hills and has been widely published throughout the years, including an appearance in Arts & Architecture Magazine. 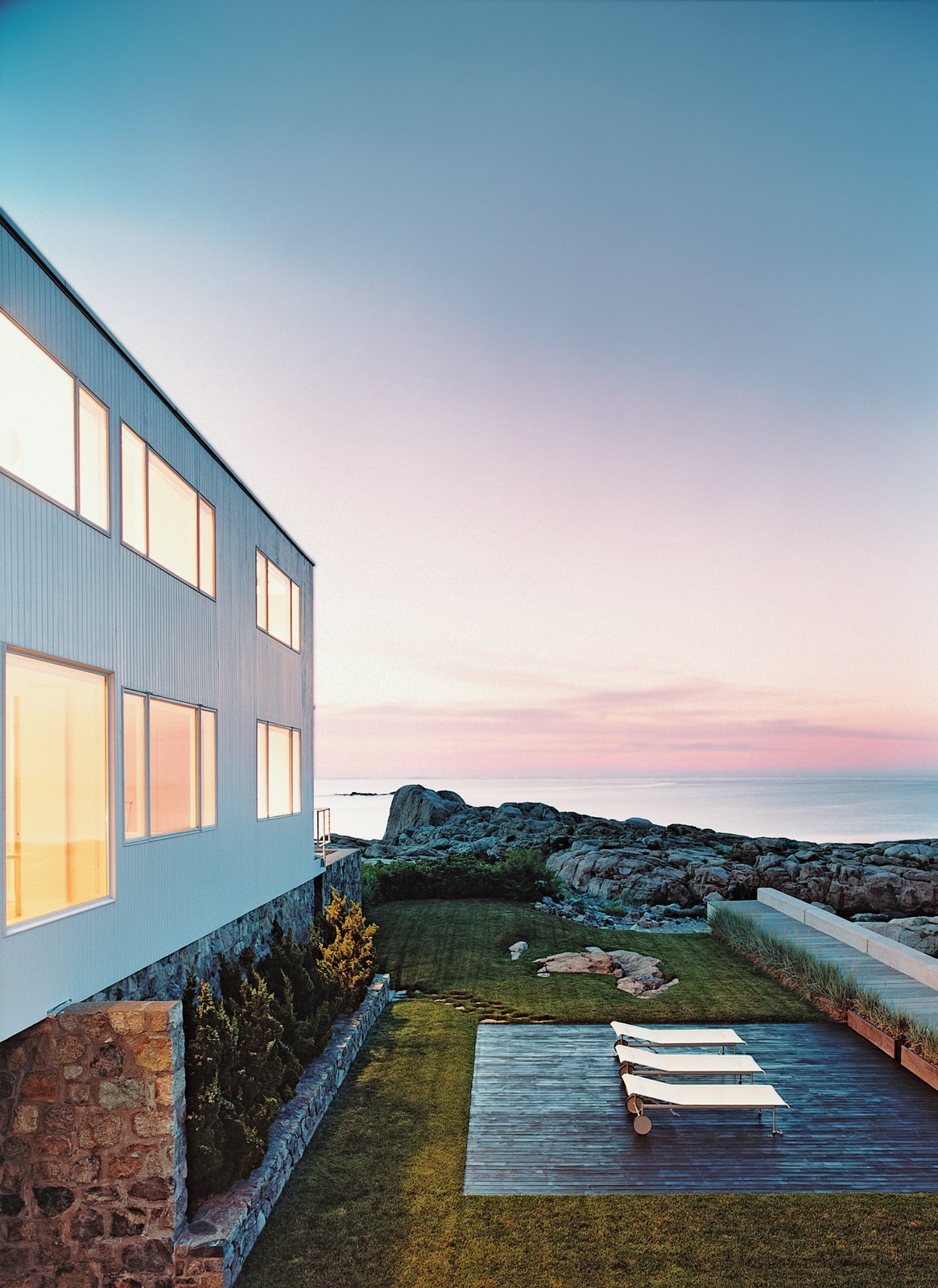 No nautical nonsense here. In 1938, when Walter Gropius built the Hagerty House along the rocky coastline of Cohasset, Massachusetts, the stodgy Yankee neighbors were appalled. The minimalist International Style structure sat in sharp contrast to the area’s traditional shingle, Federalist, and Greek Revival architecture. It was his first commission in the United States, and it helped blaze a trail for the modern century to come.