William Blake wrote that “The road of excess leads to the palace of wisdom.” Conversely, there are few better ways to achieve excess — the good, healthy kind — than through the incredible opulence of a palace hotel.

In the hotel world, “palace” doesn’t just describe a type of building. It’s a commitment to a lofty set of ideals; a designation that signifies lavish luxury served with a side of romance and intrigue — and there’s no shortage of impressive examples on Tablet. When mansion hotels aren’t grand enough, and monastery hotels are too introverted, what you need is a stately pleasure-dome that’s intended to make you feel like you rule the world. What you need is a palace hotel. Here are some of our favorites. 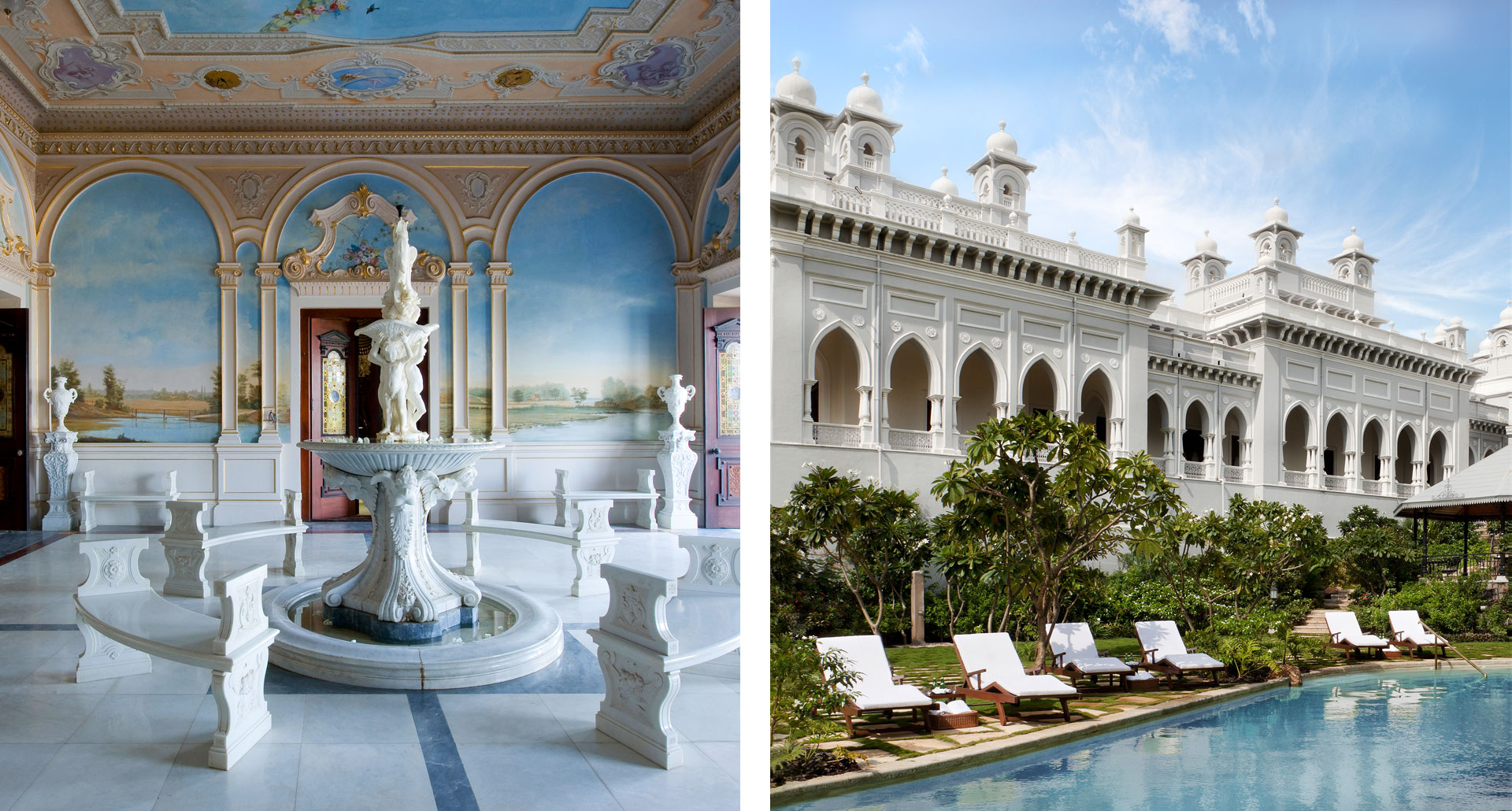 We start, appropriately, in India, the country most synonymous with plush palace hotels. The Taj group has done their part to burnish that reputation with over-the-top fantasy hotels like the Taj Falaknuma Palace. This one, with its English architecture, French tapestries, and Venetian chandeliers, still belongs to what remains of Hyderabad’s royal family, and is among India’s most opulent residences. 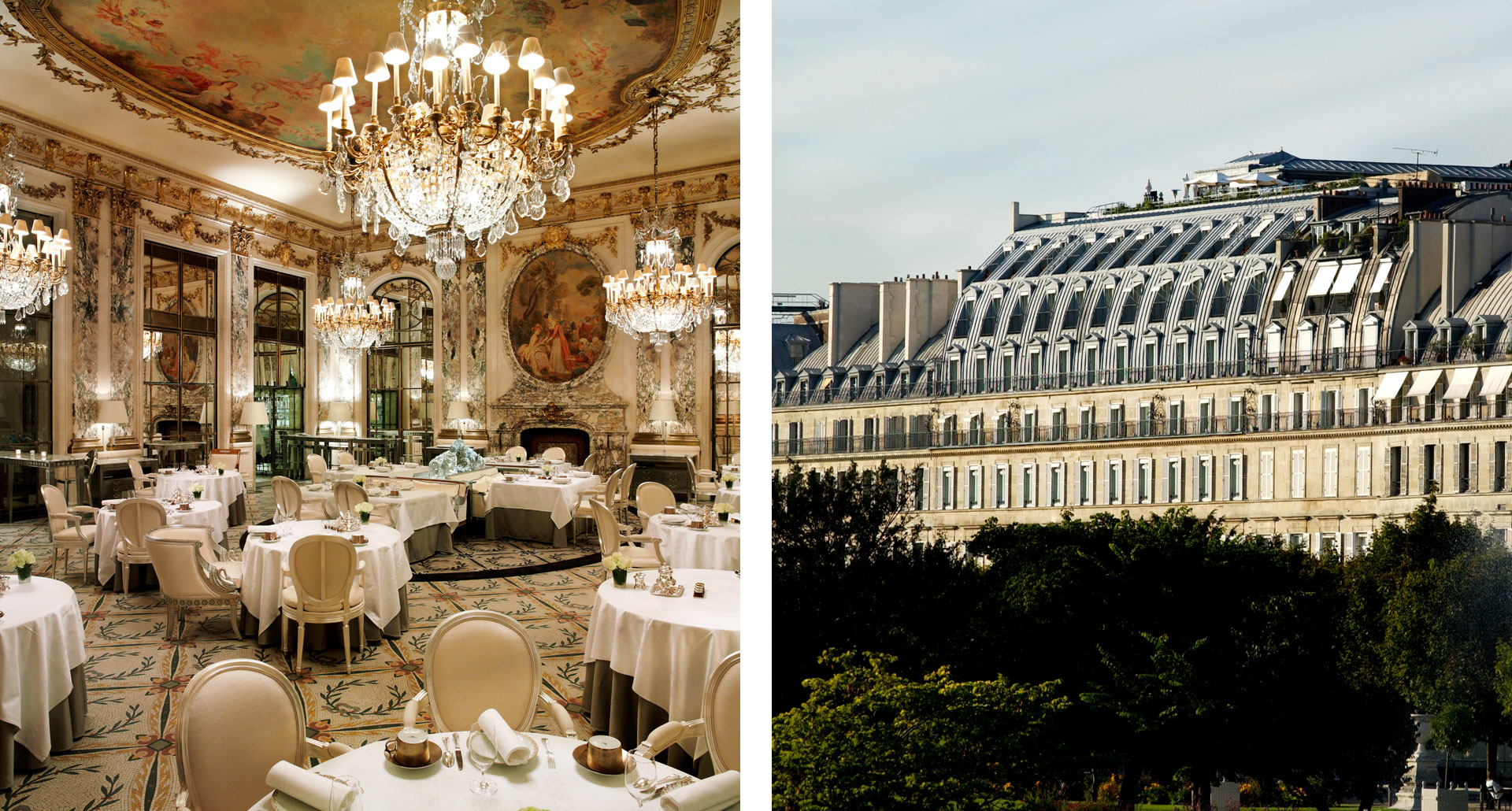 France has its own notable history with palaces, of course. In fact, the French ministry of tourism awards “palace” status to hotels that are so exceptional they enhance the country’s image throughout the world. Le Meurice is one of these. For more than a hundred years the “Hotel of Kings” has been, for many, the quintessential French hotel, reflecting an uninterrupted attachment to the French art of living. 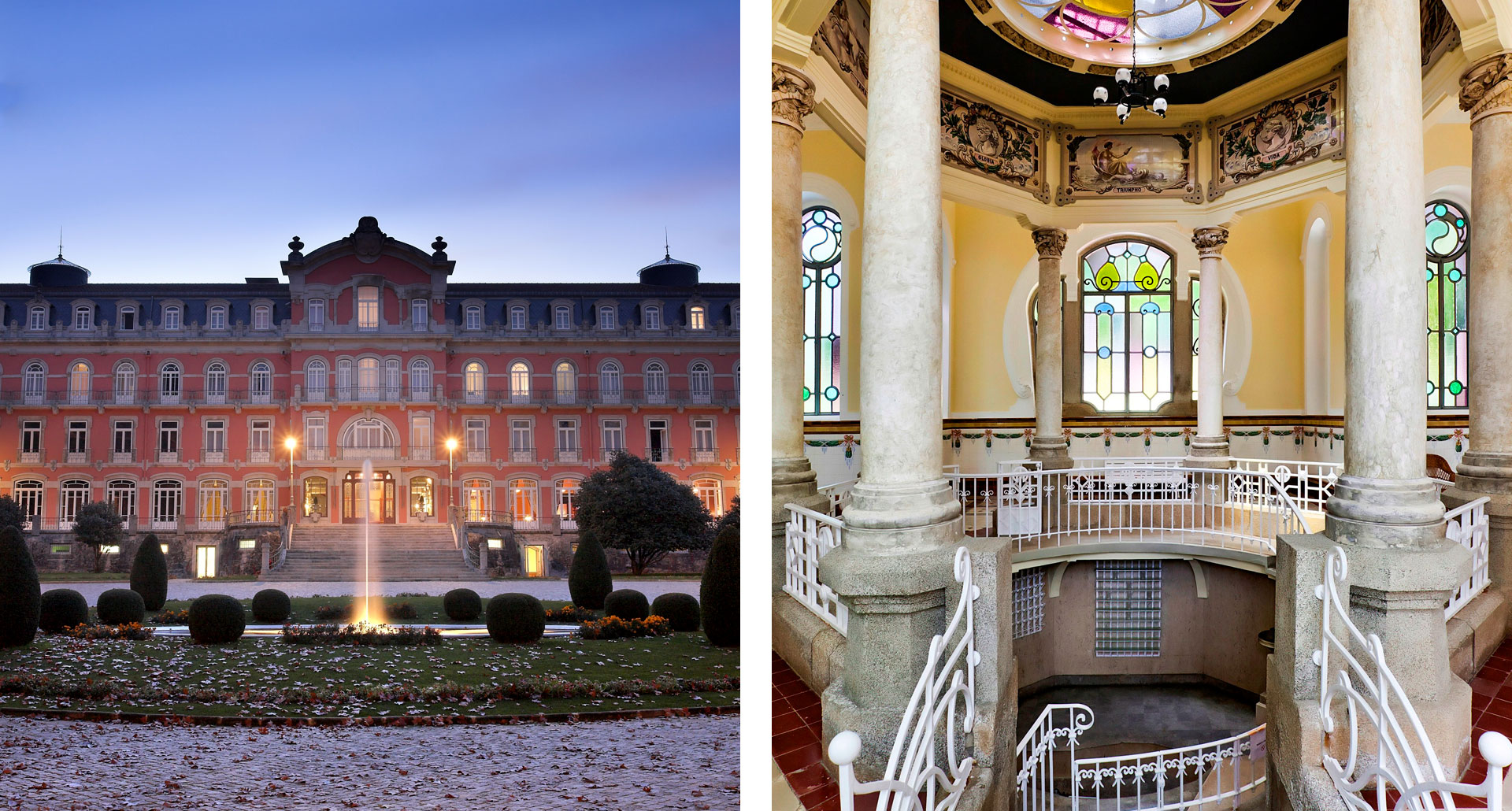 The Vidago Palace aesthetic is distinctly aristocratic: rich drapery, gleaming marble staircases, stately columns, silk wallpaper, Venetian chandeliers, floors lined with colorful mosaics. As you’d expect, there are more venues for strolling, dining, and sipping than you could possibly fit into a single visit. And we haven’t even mentioned the famous thermal springs. Good enough for King Charles I, good enough for us. 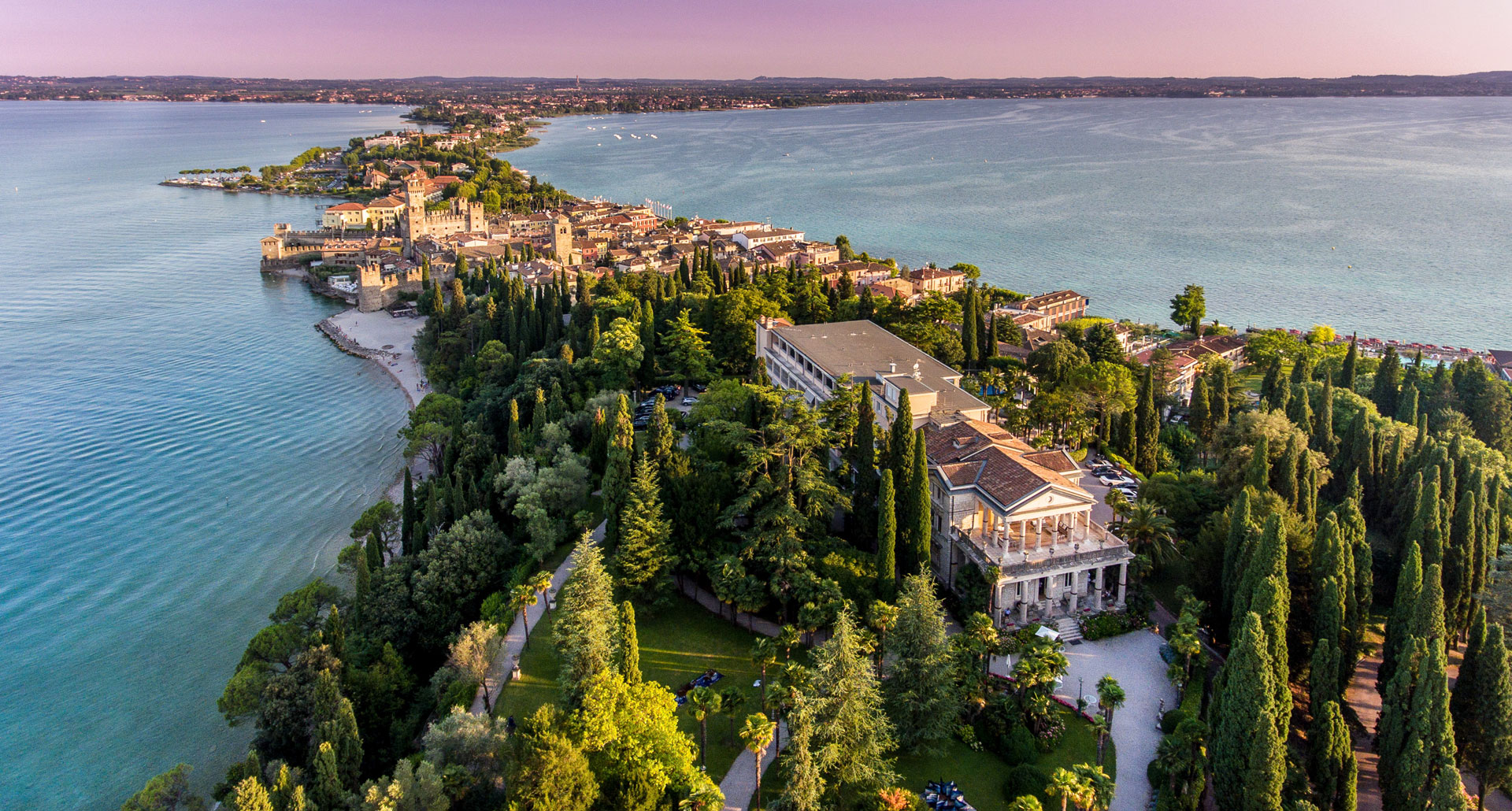 Sirmione isn’t just any lakeside municipality, but a narrow peninsula extending from the southern shore of Lake Garda. Villa Cortine Palace, a hotel created from the 1898 residence of German Count Kurt Von Koseritz, sits on a hill above the town center, its neoclassical facade surrounded by acres of gardens and parkland, offering both seclusion and unparalleled access to the lake. 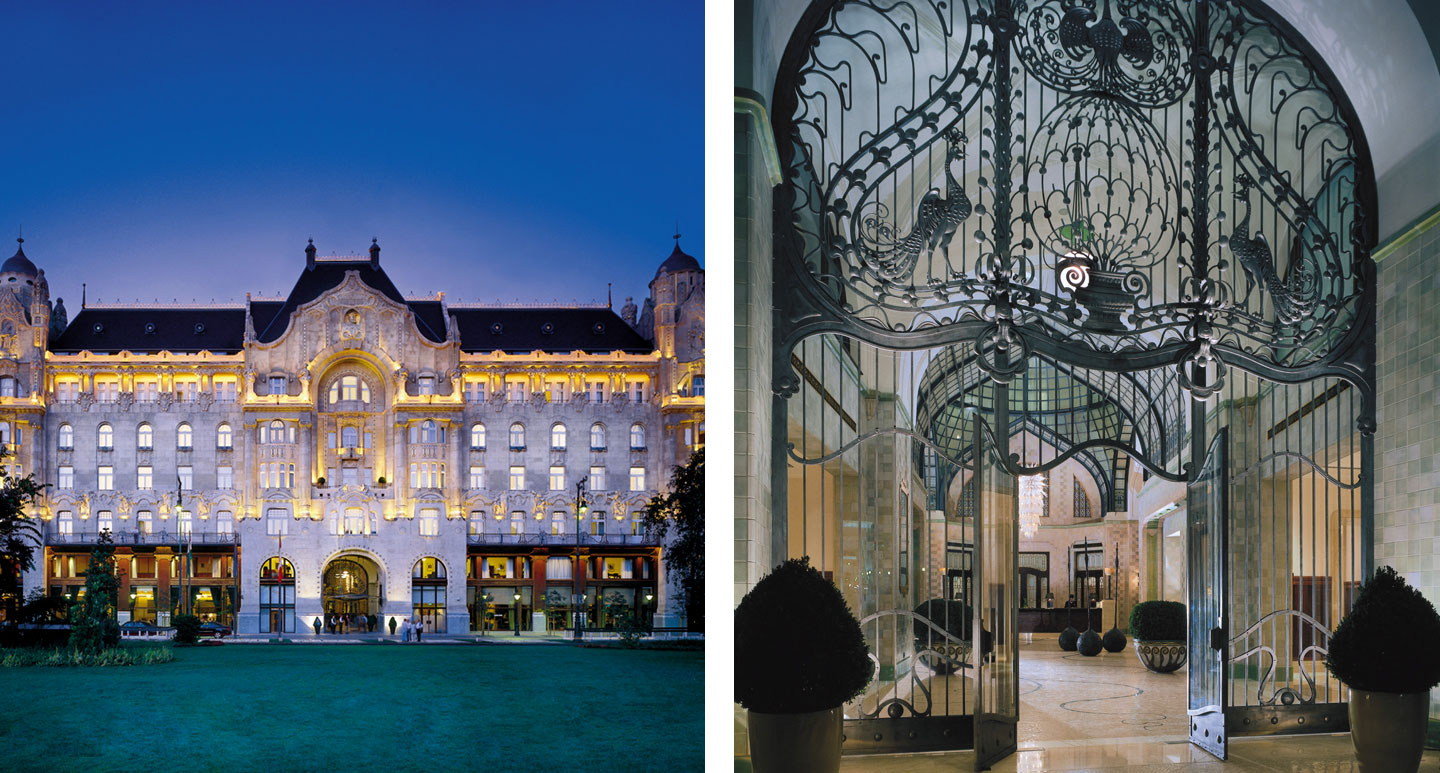 Completed in 1906, Gresham Palace is pure home-grown Art Nouveau Budapest romance. It’s an architectural monument in one of the city’s most auspicious locations, just off the Pest side of the Chain Bridge, and the square provides a perfect vantage point for taking in the whole building at once. A recent renovation used as many original materials as possible, and the effect is one that makes guests feel that they’ve traveled back in time. 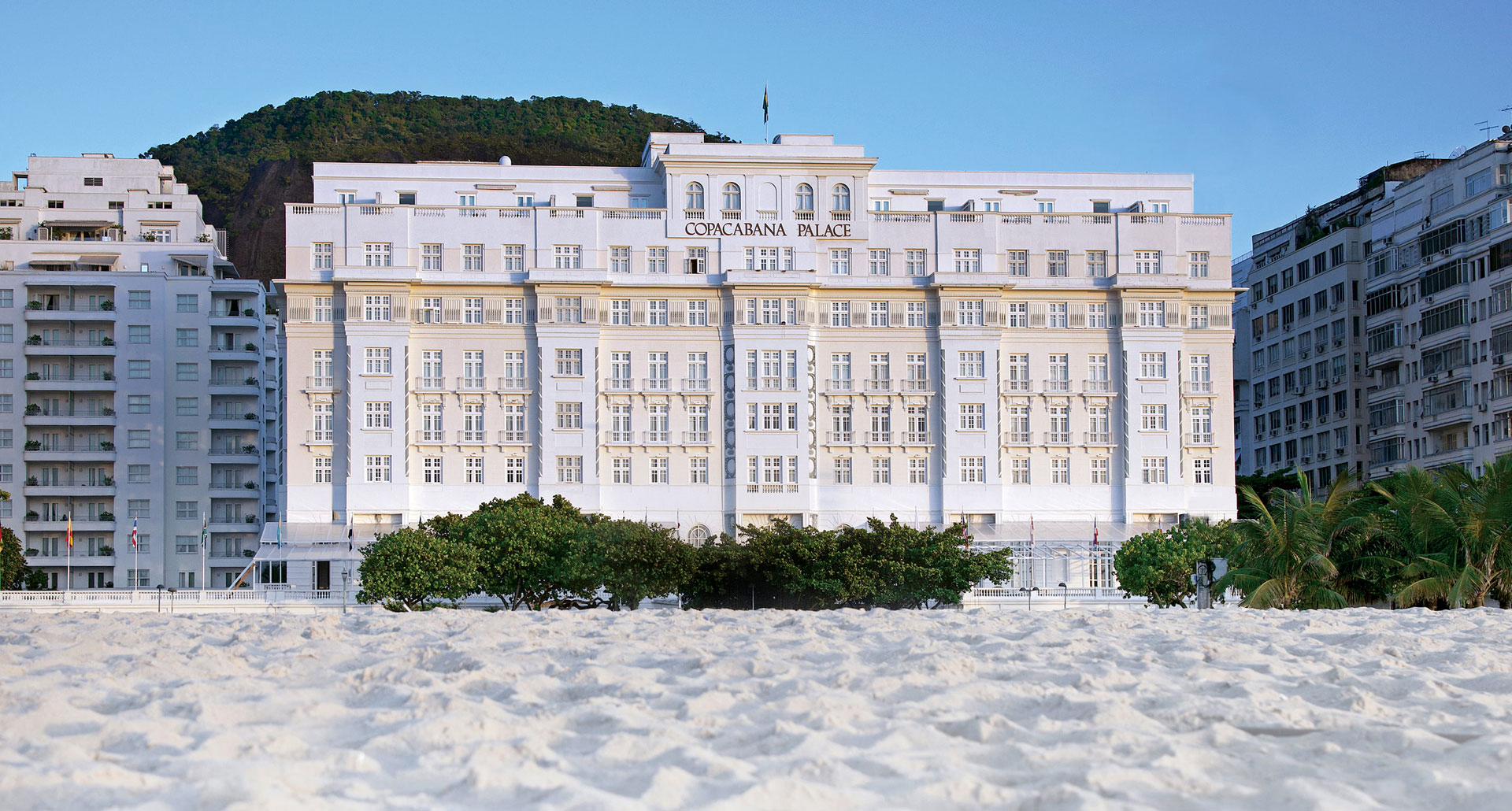 The Copacabana Palace is still the place to live the fantasy of the Rio of decades gone by. Built in 1923, at the birth of the Jazz Age, this gleaming white edifice towers over Copacabana Beach, a symbol of retro Rio romance and glamour. Perhaps one reason this palace’s star hasn’t faded — it’s been quite well kept up, meticulously renovated, with a few modern enhancements, like the new lighting system that keeps the Belle Epoque-style facade shining bright into the night. 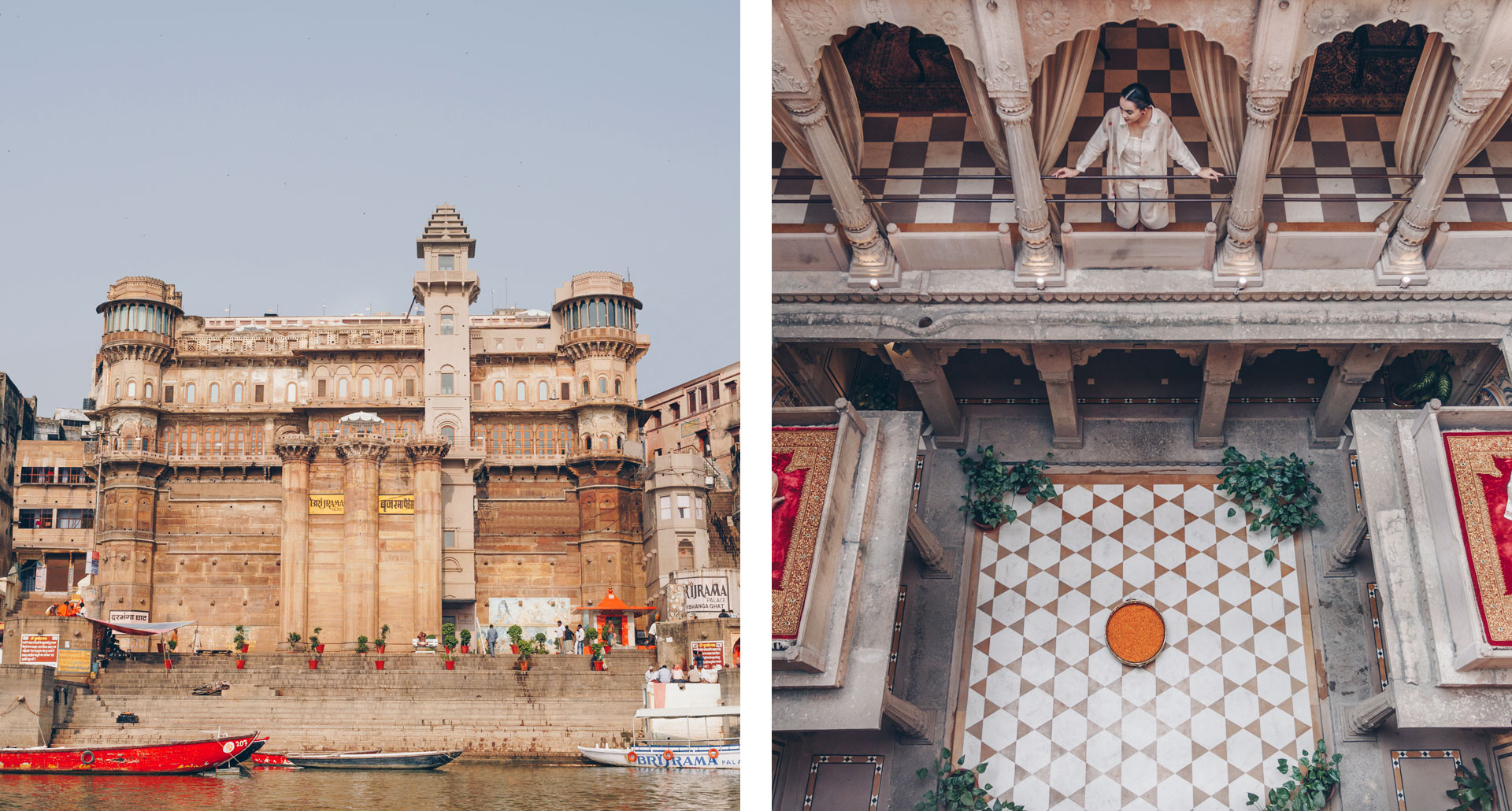 You’ll arrive to Brij Rama Palace by boat via the Ganges, rather than attempt to wrestle with Varanasi’s snarled roads, and you’ll find yourself in an eclectic environment — the building was first a fort, then an aristocratic residence, and now, as a luxury hotel, its interiors span any number of eras and styles. The furnishings and décor lavishly recall the past — though there’s nothing faded about Brij Rama. 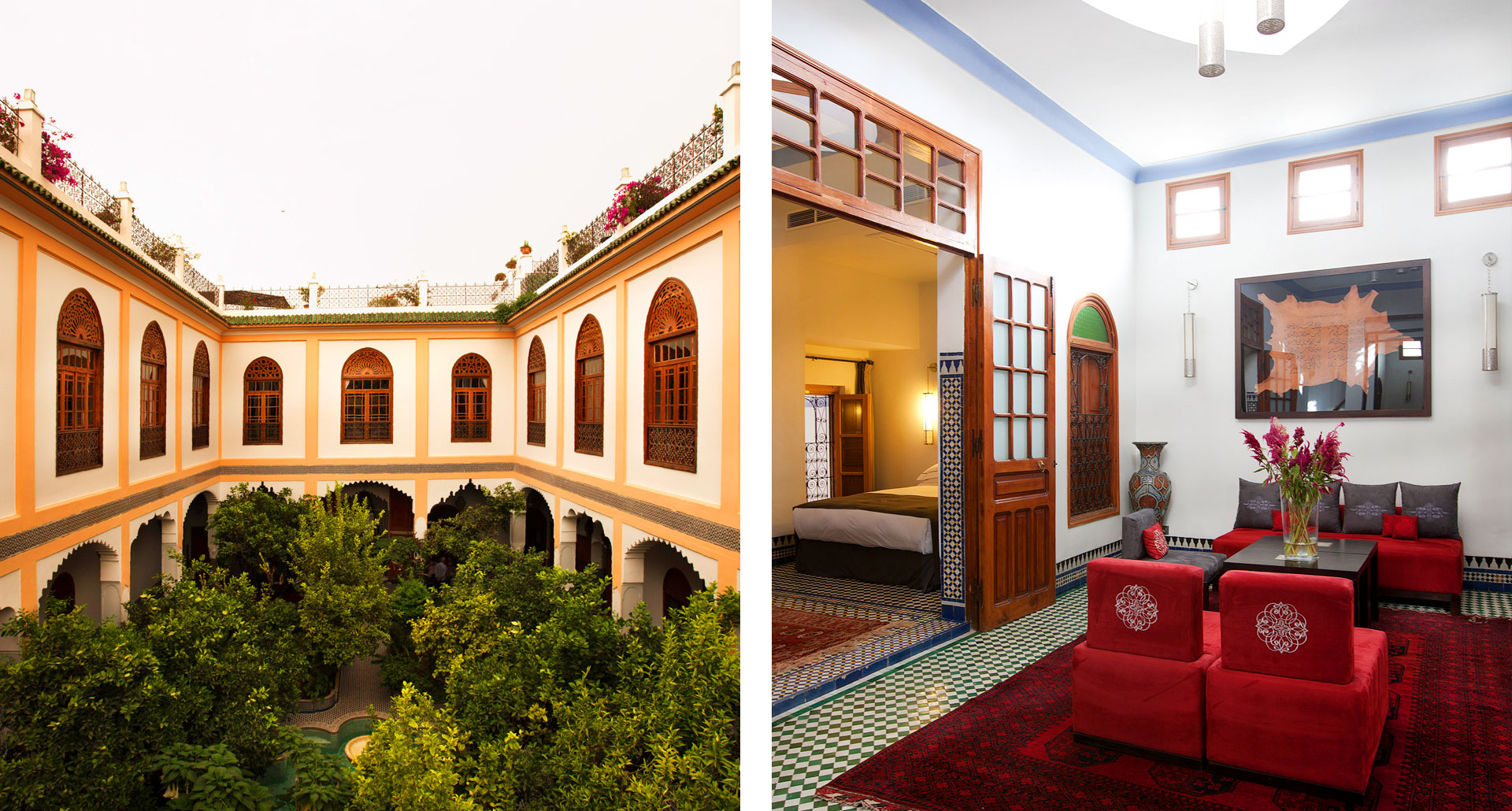 Palais Amani is a classic riad hotel built from a restored 17th-century palace. And we do mean restored: the work that went into spiffing this place up was practically archaeological in its meticulousness, and it pays off when you first catch sight of its ornate woodwork, its lavish textiles, its exquisite handmade tiles. The rooms, suites, and apartments are all different, but none let their traditional style impede their contemporary comforts. 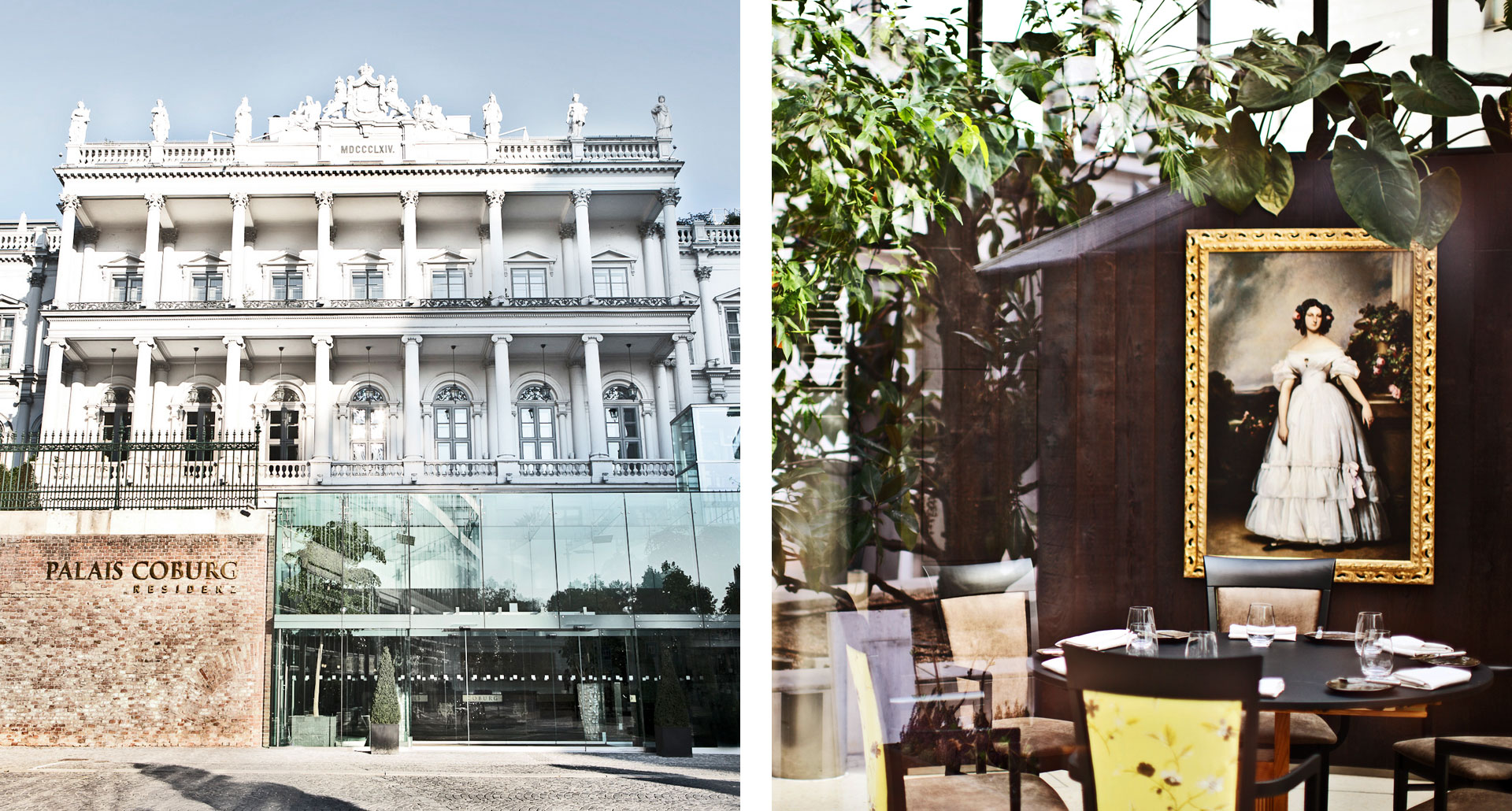 This 19th-century neoclassical palace isn’t shy about its opulence: the splendor of Palais Coburg’s entry is calculated to impress, and makes good on the promises made by the building’s ornate facade. No expense is spared in the accommodations either; the palace is divided into just thirty-five suites, all individually designed, outfitted in styles ranging from the absolutely authentic to the quietly contemporary. 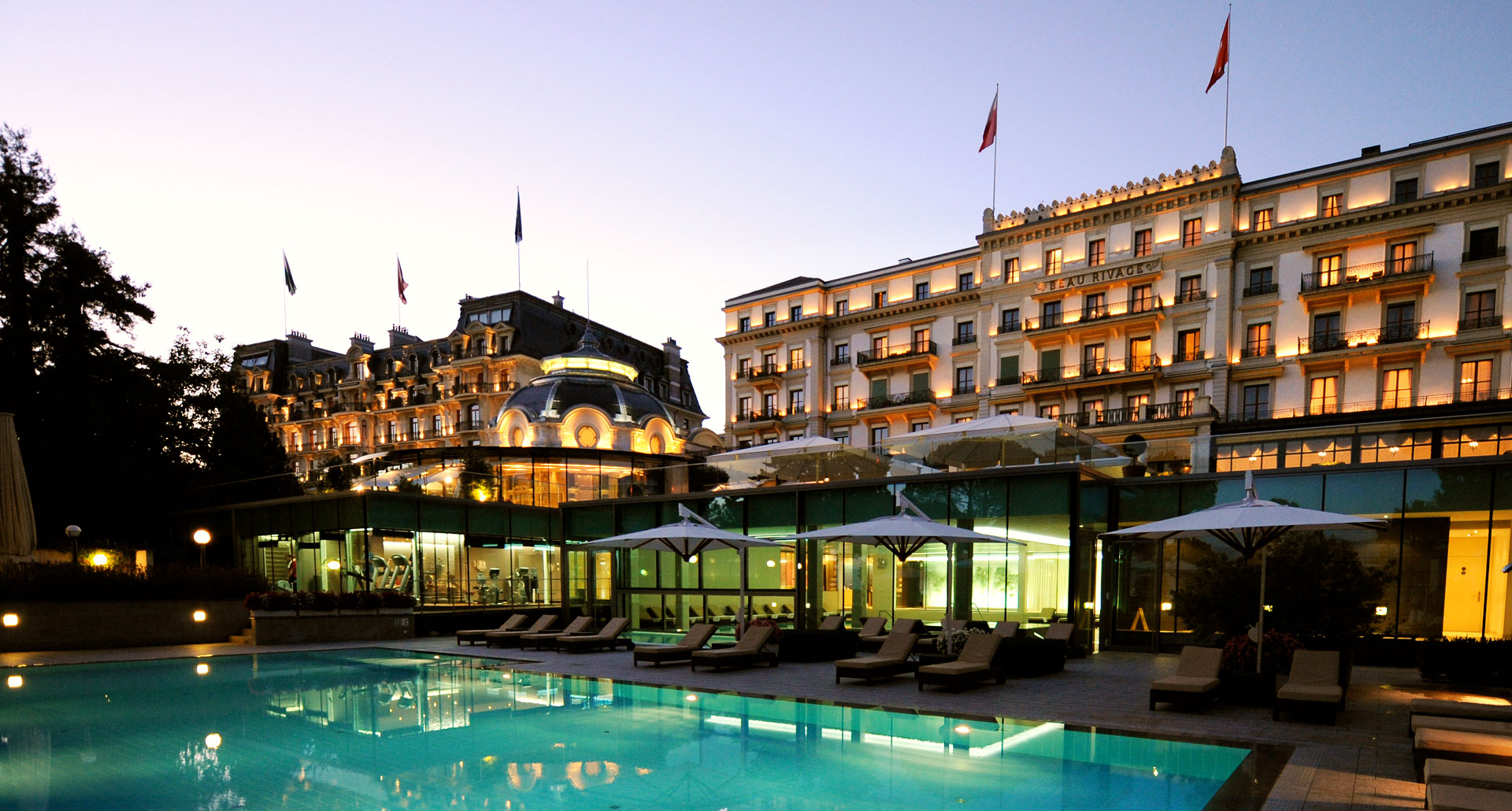 One of the last of Europe’s traditional grand hotels, Lausanne’s Beau-Rivage Palace recalls the days of aristocrats traveling by coach; from within the gardens of the hotel’s ten-acre grounds, pressed up against Lake Geneva, it would be easy to feel a little bit lost in time. Views are spectacular, with the better rooms looking over the lake and the French Alps, and the hotel itself is rather easy on the eye as well. 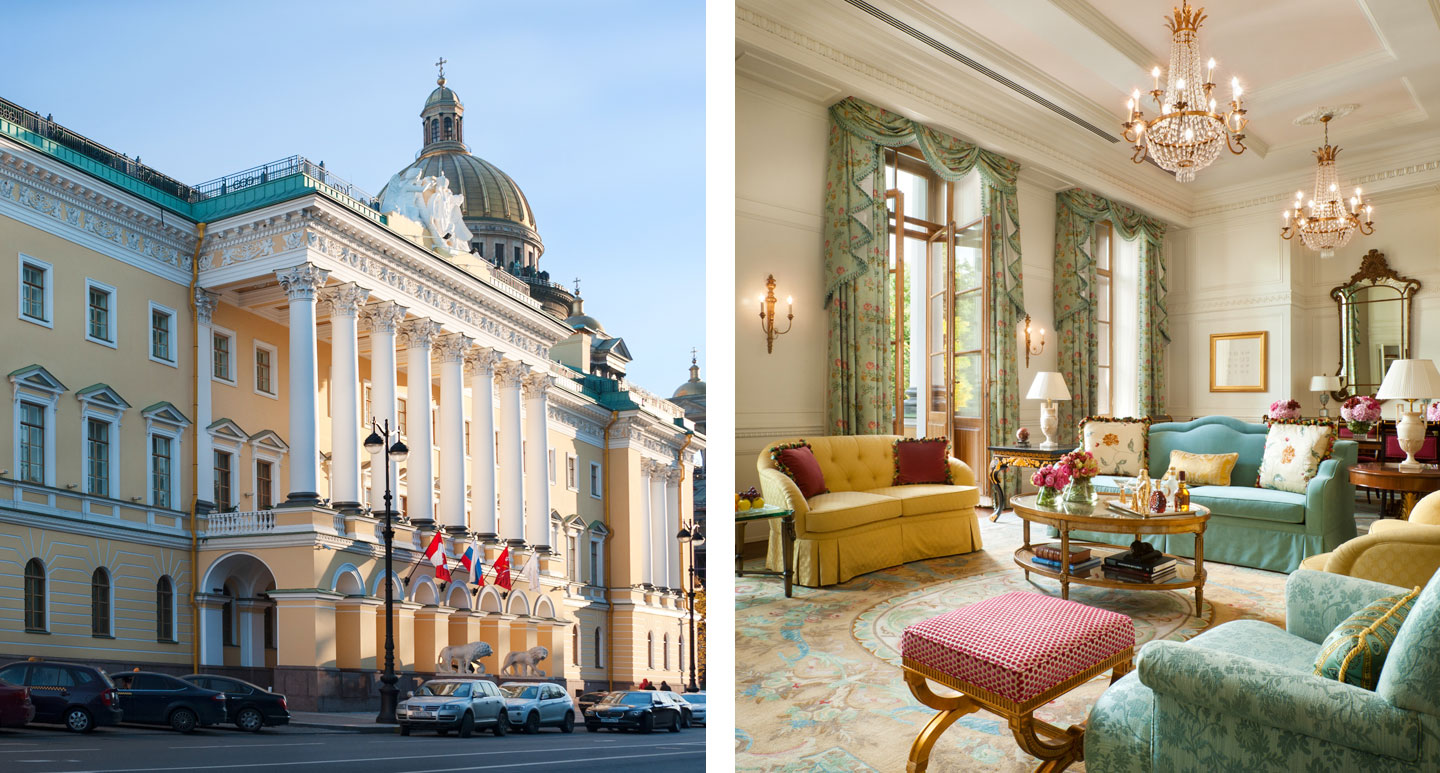 If your tastes run towards the monumental, St. Petersburg is your city — and the Four Seasons Hotel Lion Palace is your hotel. Housed in a stately 19th-century palace, guarded by a pair of marble lions that were immortalized in a Pushkin poem and survived the Siege of Leningrad, the hotel is more or less equal parts luxury and heritage — and needless to say, there’s a dazzling amount of both. 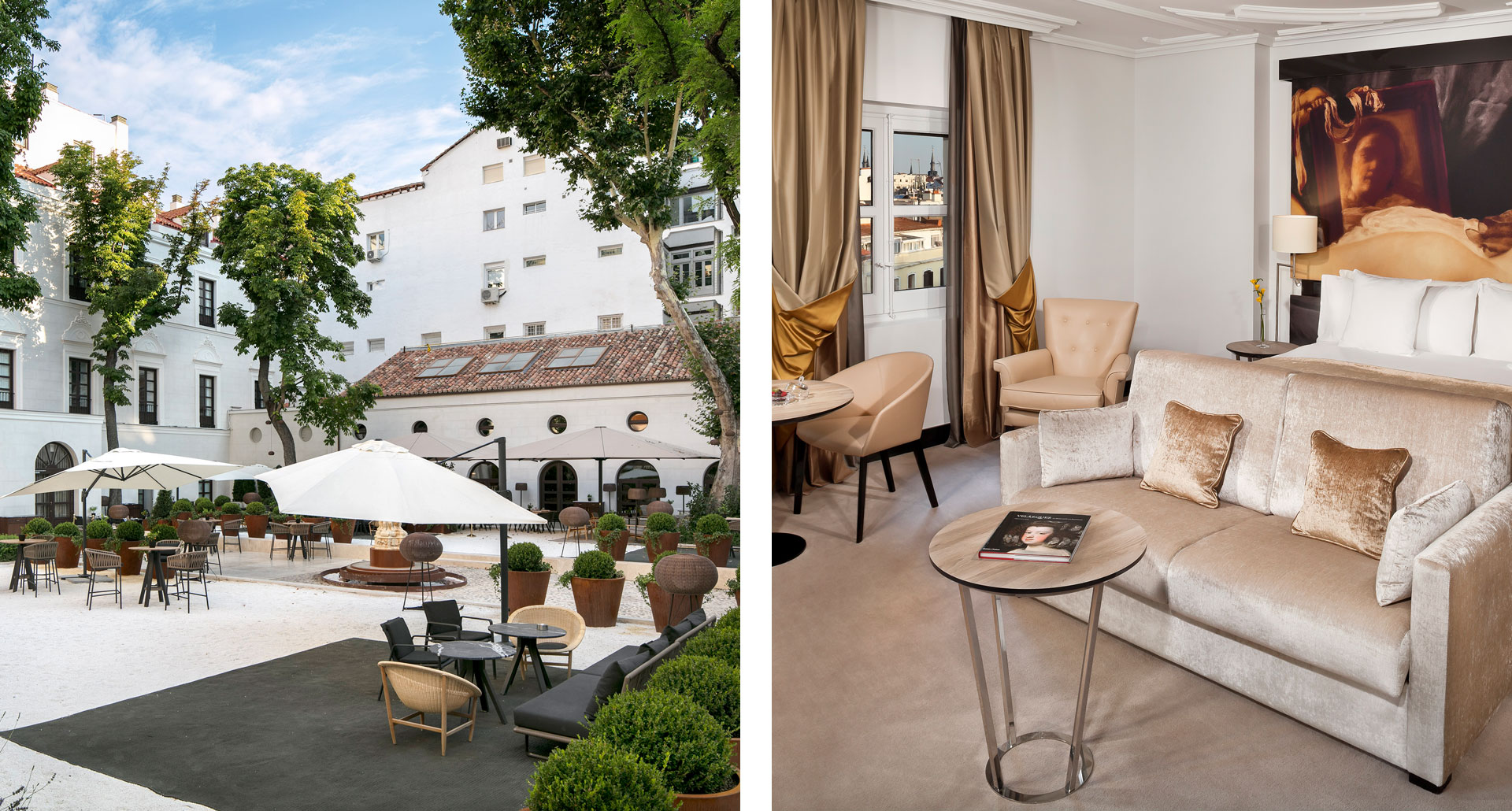 Given the name, it may not surprise you to know that Gran Meliá Palacio de los Duques was once an aristocratic residence, specifically a 19th-century palace belonging to a pair of dukes. And while the renovation required to bring it up to modern five-star standards was a thorough one, enough of the original architecture remains to ensure that the Palacio still feels like a palace, rather than just another luxury hotel. 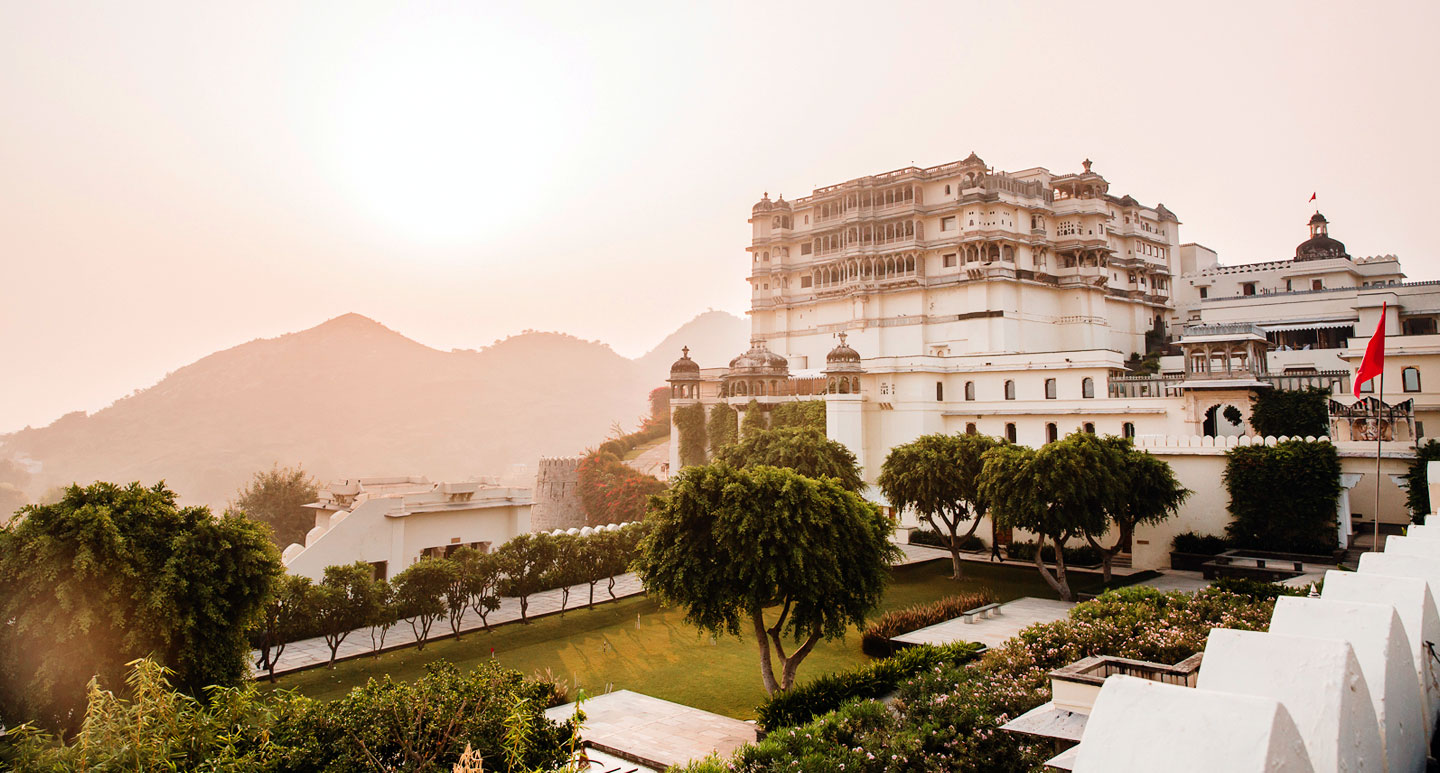 RAAS Devigarh is a palace, it’s just a surprisingly contemporary one. The contrast between the faded majesty of the 18th-century exterior and the sparkling modernity of the interiors is striking — picture suites of all-white marble-floored minimalist fantasy with traditional jharoka windows that overlook the rugged Rajasthani countryside. It’s all a testament to a beyond-thorough restoration that took 750 workers some 15 years to complete. 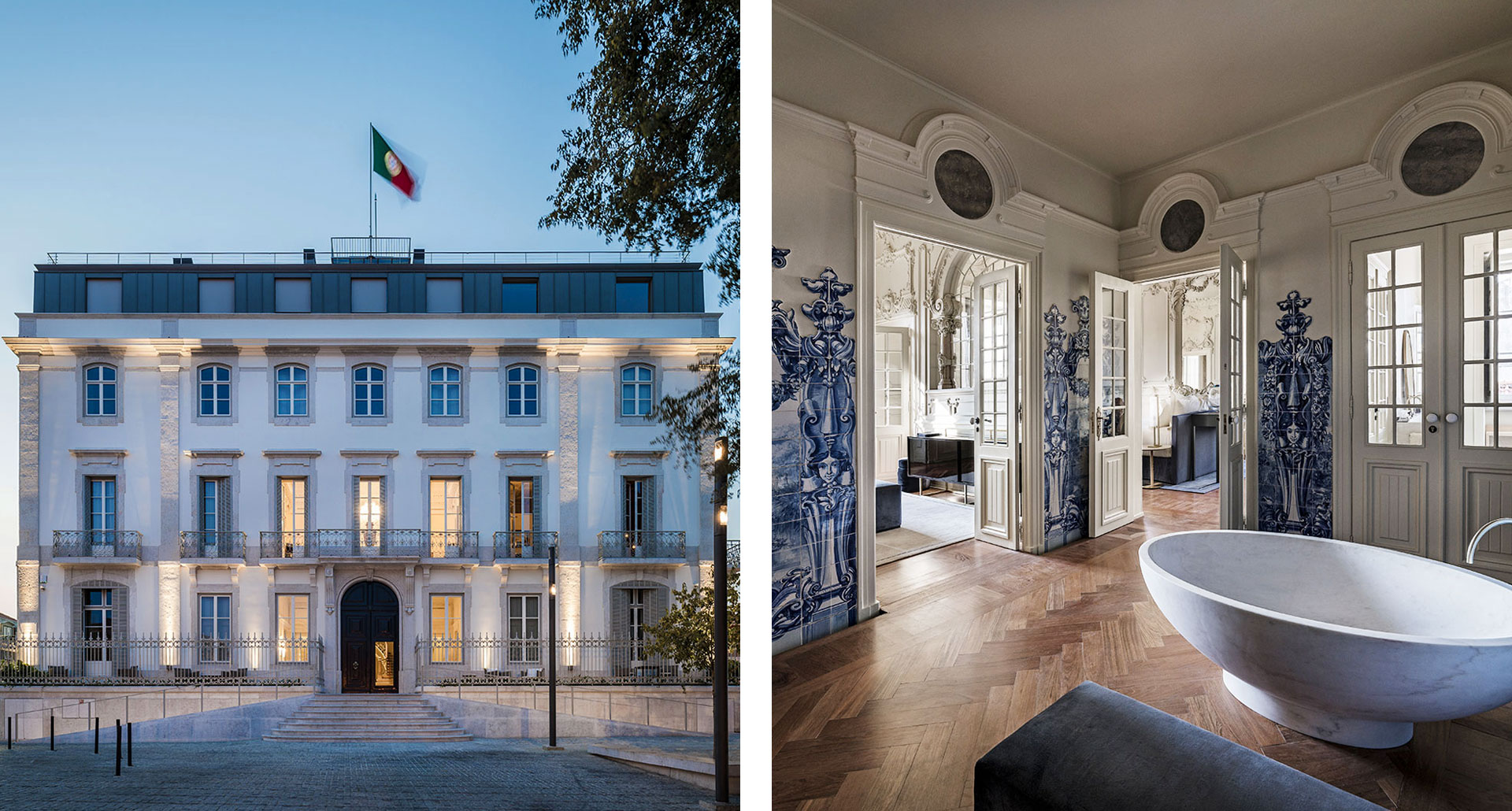 Verride Palácio Santa Catarina stands out. This splendid old palace in the blossoming Chiado district dates back to the year 1750, and it’s full of lovingly preserved original architectural detail. But it’s not strictly a by-the-book restoration — architect Teresa Nunes da Ponte and designer Andrea Previ have introduced a contrasting line of modern design that harmonizes beautifully with the opulence of the old palace. 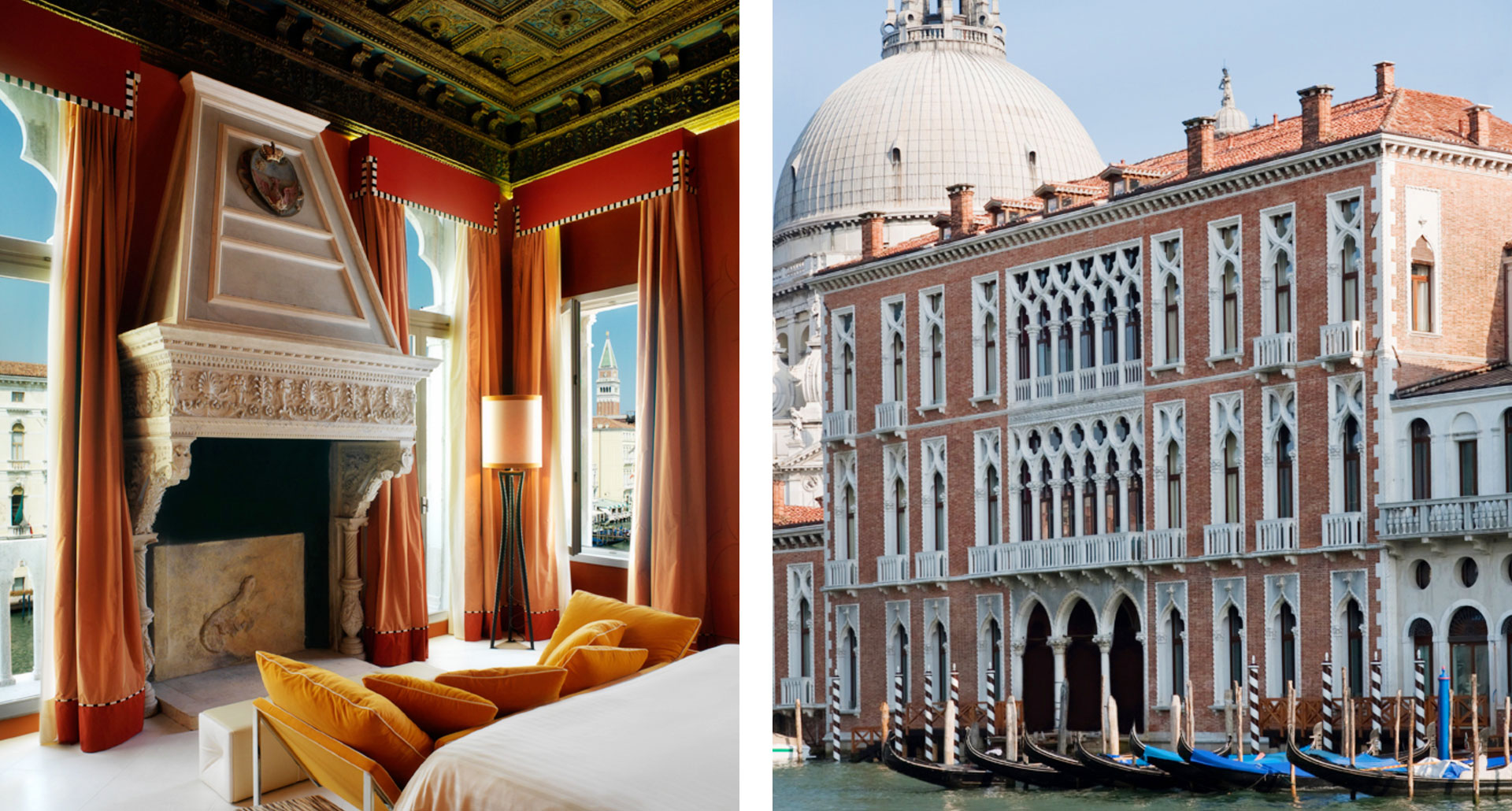 Behind the postcard-perfect Venetian-Gothic exterior of this former convent is something else entirely: a thoroughly modern, thoroughly luxurious boutique hotel-cum-palace. Not that you’ll imagine for so much as a moment that you’re anywhere other than Venice. Set at the mouth of the Grand Canal, with the lagoon on one side and narrow alleyways on the other, the scene surrounding the Centurion Palace is about as typically Venetian as it could possibly be. 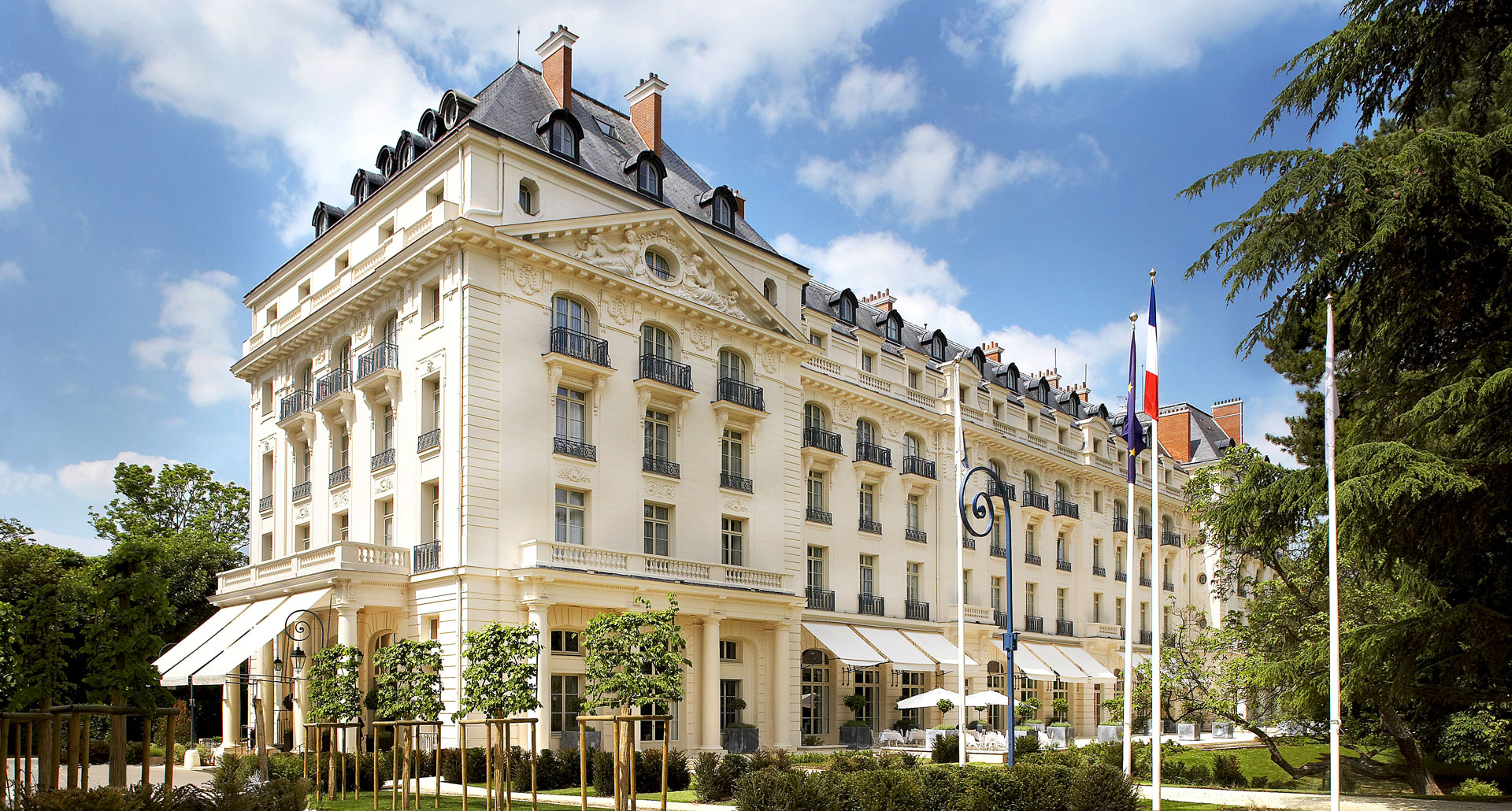 Since opening its doors in 1910, Trianon Palace has hosted the leading figures of government, industry, and culture – the Treaty of Versailles, in fact, was written in its Clémenceau Room. Perched at the edge of Louis XIV’s Royal Estate, this palace of cut stone overlooks the park’s lawns and gardens, with a view of the Chateau de Versailles or the Paris skyline. But this is no museum piece; beneath the painstakingly restored surface is a contemporary luxury hotel.