A journey of solitude and tranquility ends with our planet’s most heavenly sight, and with two hotels that help you bear witness.

I’m in an airport bathroom in Finland, and something’s leaking. I can hear it. It sounds like a babbling brook. I look around for the source somewhat frantically because, let’s be honest, a bathroom ranks low on the list of places you’d want anything leaking onto you. An airport bathroom ranks even lower. Finally, I discover it. The burble is coming from a loudspeaker on the toilet. This isn’t a plumbing issue. This, I learn, is an attempt to stretch the tranquility of this country into every space. I can’t help but admire the ambition.

A visit to Finland is a visit to nature. She reigns supreme over this country and its population of five million. That’s not a large number of inhabitants — still, we should see some Finns, right? Leaving the airport, we’re immediately wondering where everyone is. On the highway, motorists are conspicuous in their absence. It looks like everyone left in a hurry. In reality, it’s a day like any other.

The space feels different here. Wider. Purer. Lighter. Instead of cars and urban landscapes, miles of conifer trees in tight rows escort us along our way. We see only their evergreen bristles, the gray sky, and at times the deep blue of a calm lake. Not to mention, the typical red wooden houses that seem all carved from the same tree. Every preconception we held about Finland has turned out to be deliciously true.

The one question — but where are the Finns? — strikes us over and over during our stay. The more time we spend in the country, the higher the probability should be of seeing other humans. It doesn’t happen. Four, five hours of hiking through the forest to follow wild lakes and cross country roads and we don’t see another living soul. We taste, for the first time perhaps in our lives, the purest tranquility. A soothing, meditative solitude. The place seems truly blank. Removed of all noise, of all movement, except those of nature. 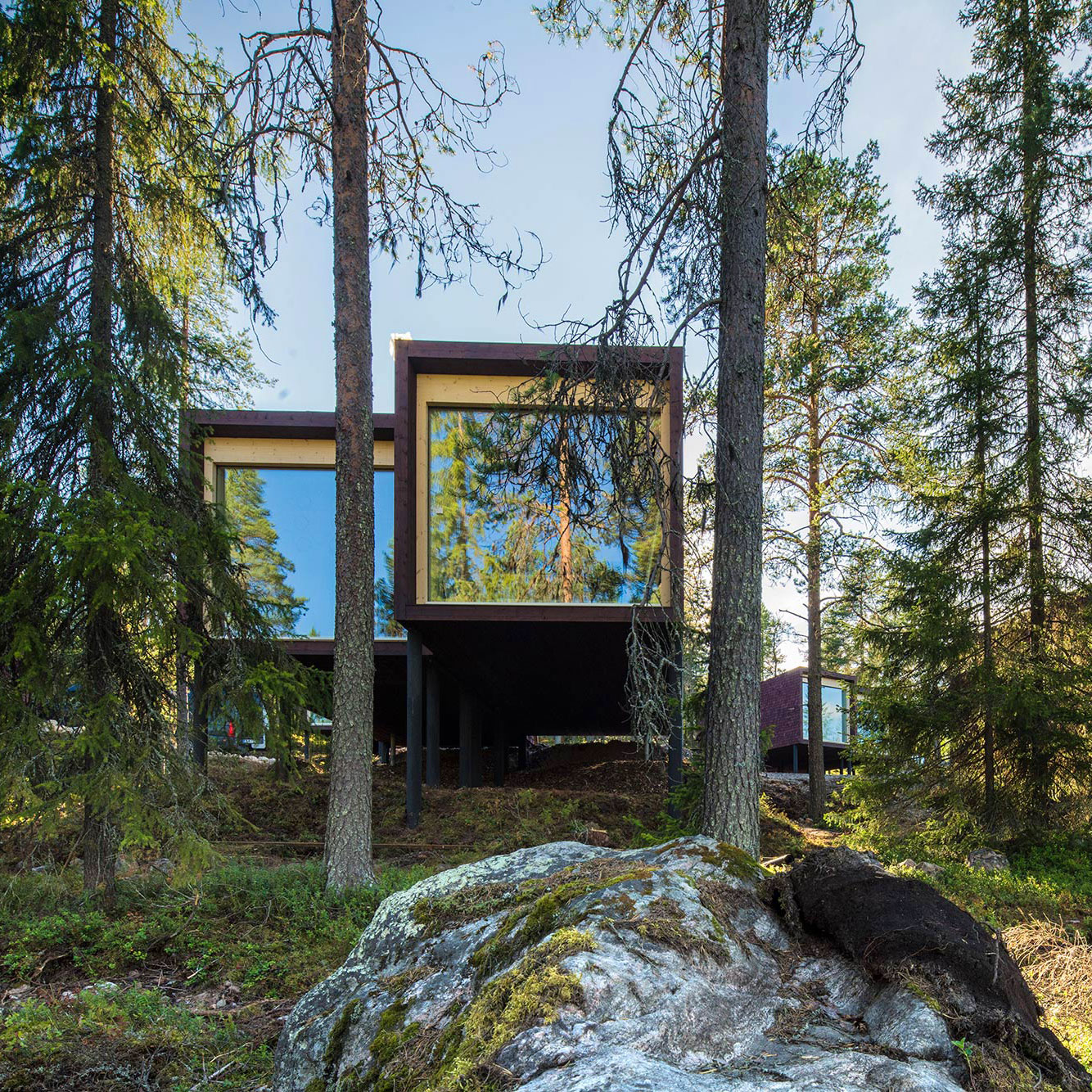 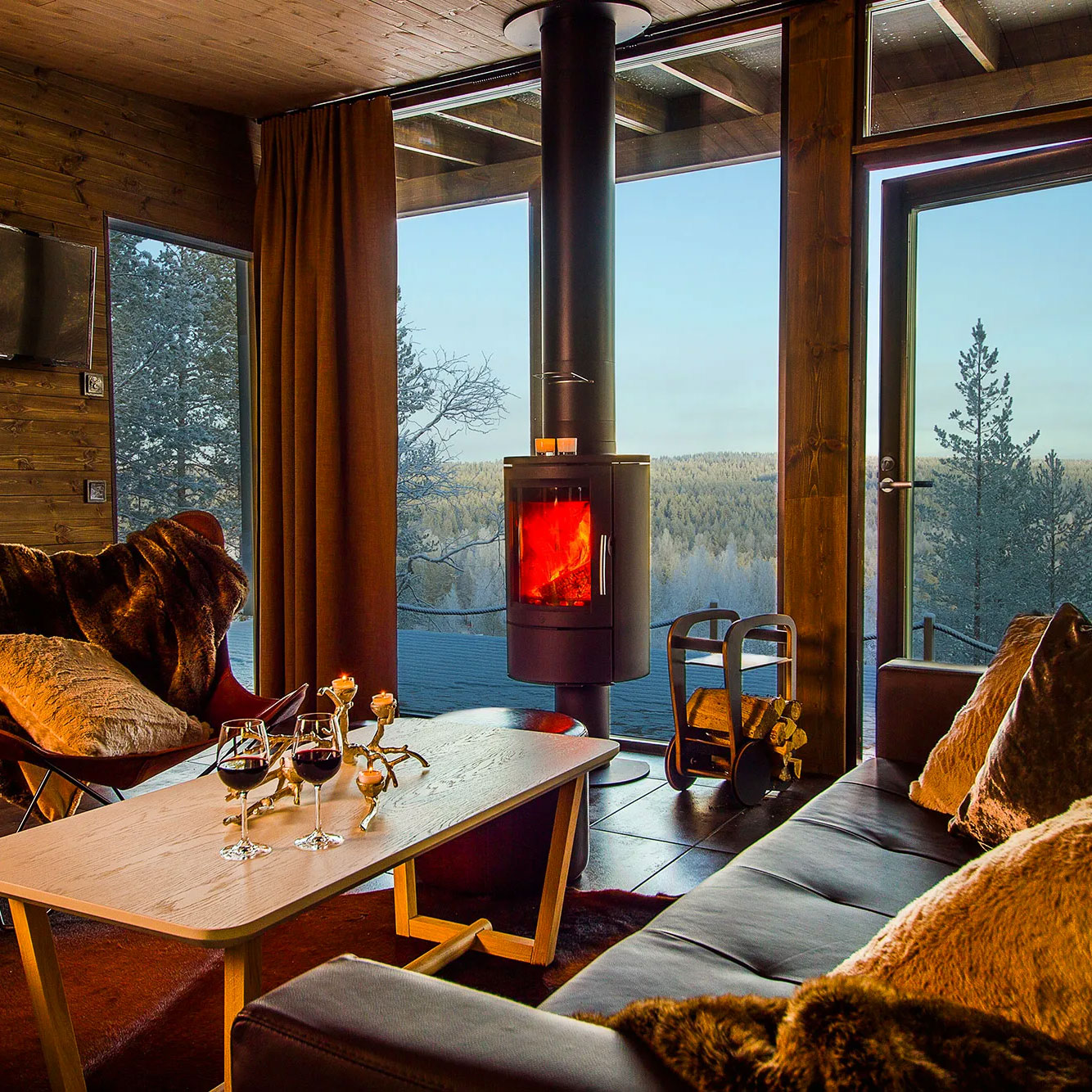 However, they are there, the Finns. At home, in their cabins on the edges of lakes, in their saunas, or at the grocery stores. That these interactions are so rare is no mystery, and can be explained by a simple equation. At just eighteen people per square kilometer, one of the largest countries in Europe has one of the lowest population densities on the continent.

It makes for a majestic time — whether bathing in one of Finland’s ubiquitous lakes or napping by a lonely campfire. If you’ve come in the winter, a simple walk under the snow-covered pines becomes an ascetic experience.

But if you have come in winter, you’ve almost certainly come to seek the aurora borealis, or Northern Lights. And for this, your best chance is undoubtedly in Lapland. And even here, in the largest and northernmost region of the country, this natural luminous phenomenon is elusive. It’s impossible to predict when exactly the lights will make their surreal appearance. But when they do — it’s unlike anything in the world.

In his poem Dark Night of the Soul, 16th-century mystic St. John of the Cross describes a journey through darkness that leads to a magnificent spiritual union. You don’t have to be religious to see the parallels to the pilgrimage so many make to see the Northern Lights. If there’s anything in our grasp that resembles God, an aurora is as satisfying a manifestation as any.

So what is it? We’ll keep the science brief. When solar particles, attracted towards the north and south poles by the magnetic field of the Earth, ignite in contact with our atmosphere, that collision manifests in beautiful, multicolored streaks of light. The best time to see this phenomenon is between August and April. In fact, the lights are most active in autumn and spring. But since they’re only visible at night, many aim for the winter period, when nights are longest and darkest.

The best hotels in Lapland know just why you’ve come. They trade on Finland’s tranquility, natural abundance, and majestic Northern Lights with a creativity that befits a land that’s learned to make the best of weeks on end of nearly complete darkness. Two hotels in particular — Arctic Treehouse Hotel and Kakslauttanen Artic Resort — stand out for bespoke design in service of the aurora. 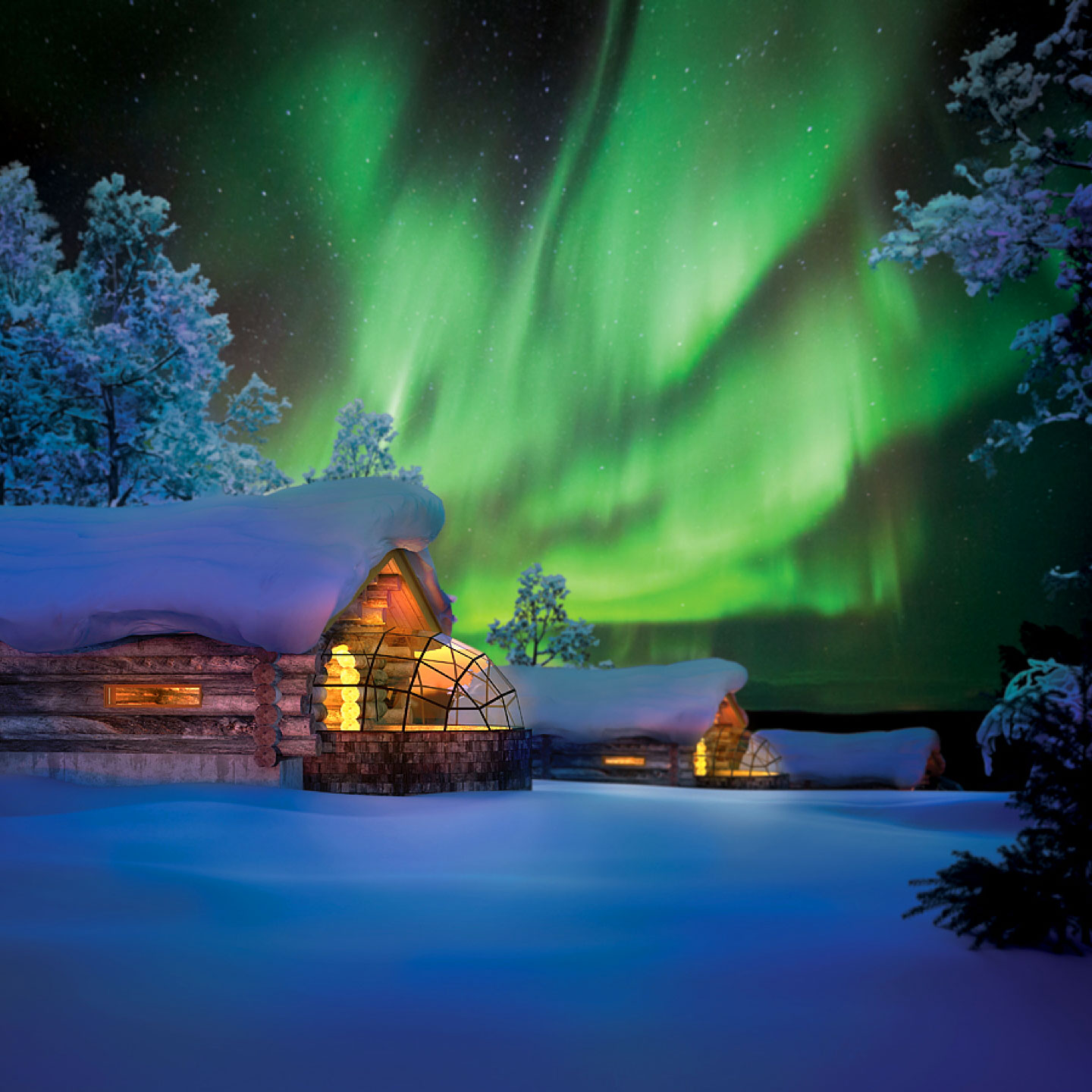 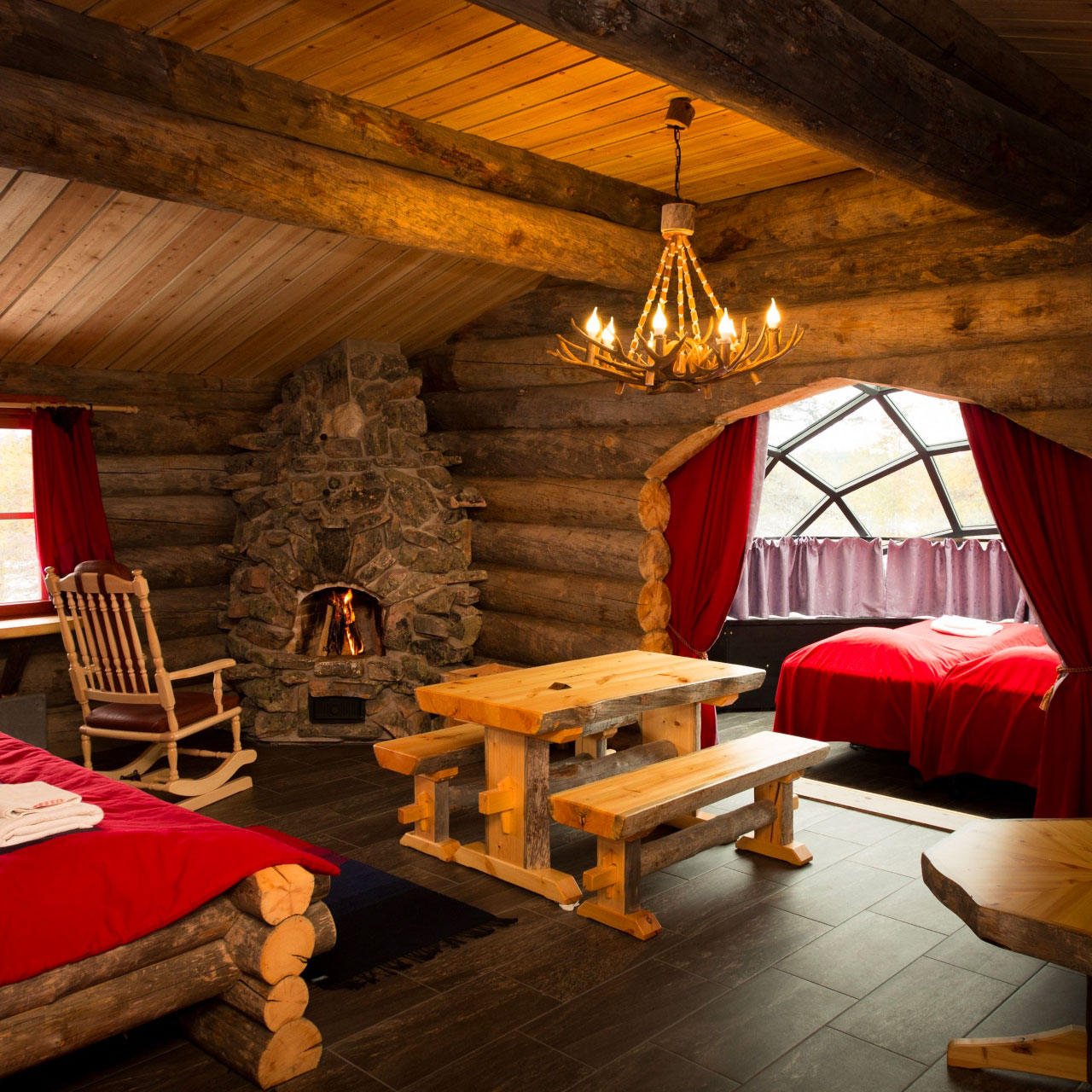 At Kakslauttanen Artic Resort, one room type consists purely of a glass-domed igloo, and comes with either enough space for two or four (there is a toilet, but little else). Other accommodations include the same style of glass dome, this time attached to a more civilized log cabin. Another option is an actual igloo made of snow that stays warmer than the outdoors, but nonetheless comes quite necessarily with a down sleeping bag. The second hotel to note, the Arctic Treehouse Hotel, features cube-like suites with giant picture windows in the forest — some with private saunas and real fireplaces. There is no shortage of saunas in Finland.

At both hotels, the chance to see the Northern Lights is just one of dozens of Arctic-specific, once-in-a-lifetime tourism miracles. One is something called “Arctic Ice Floating,” where the staff of the Treehouse Hotel will take you out to a forest lake and help you into a floating suit — in it, you’re safe and warm, gazing up at the stars like a bubble on the surface of the water. Another is the “wool sock walk,” where serious layers of socks replace shoes as you hike throughout woods with only the snow beneath your feet. In winter, Kakslauttanen will guide you to reindeer-driven safaris or cruises on an icebreaker ship, while in summer, Lapland comes alive with hiking, horseback riding, canoeing, and whitewater rafting.

Outside of the confines of the hotel, the impression of isolation returns. There’s certainly community to be found in these places, if one desires. At the same time, there’s something seductive about a place with so much glorious space and so little human interaction. To slink to the top of the continent, remove yourself from civilization, and put up in the immensity of an immaculate forest is a unique experience of withdrawal, and brings an extraordinary sense of fulfillment. It’s the feeling St. John of the Cross must’ve been referring to. ▪ 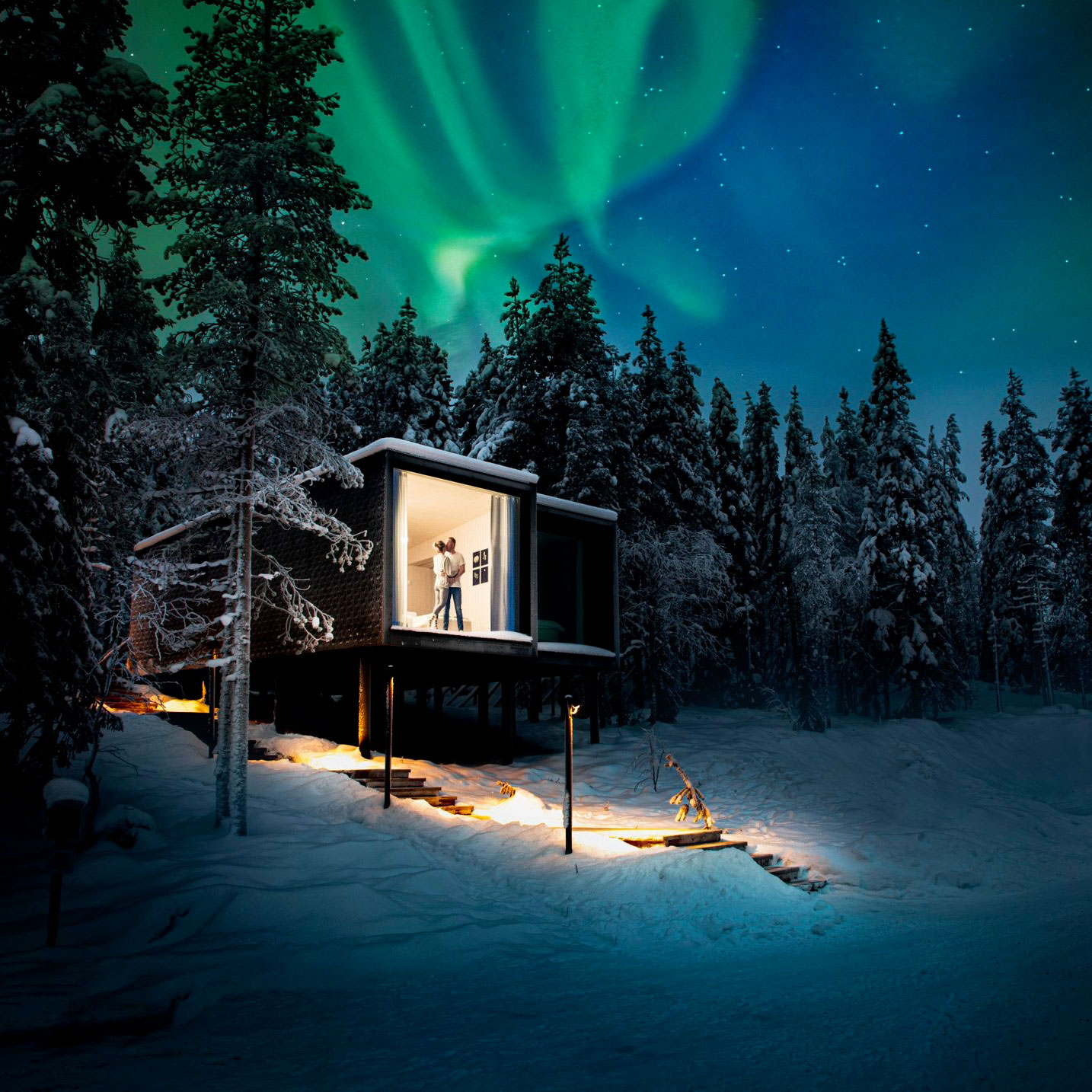