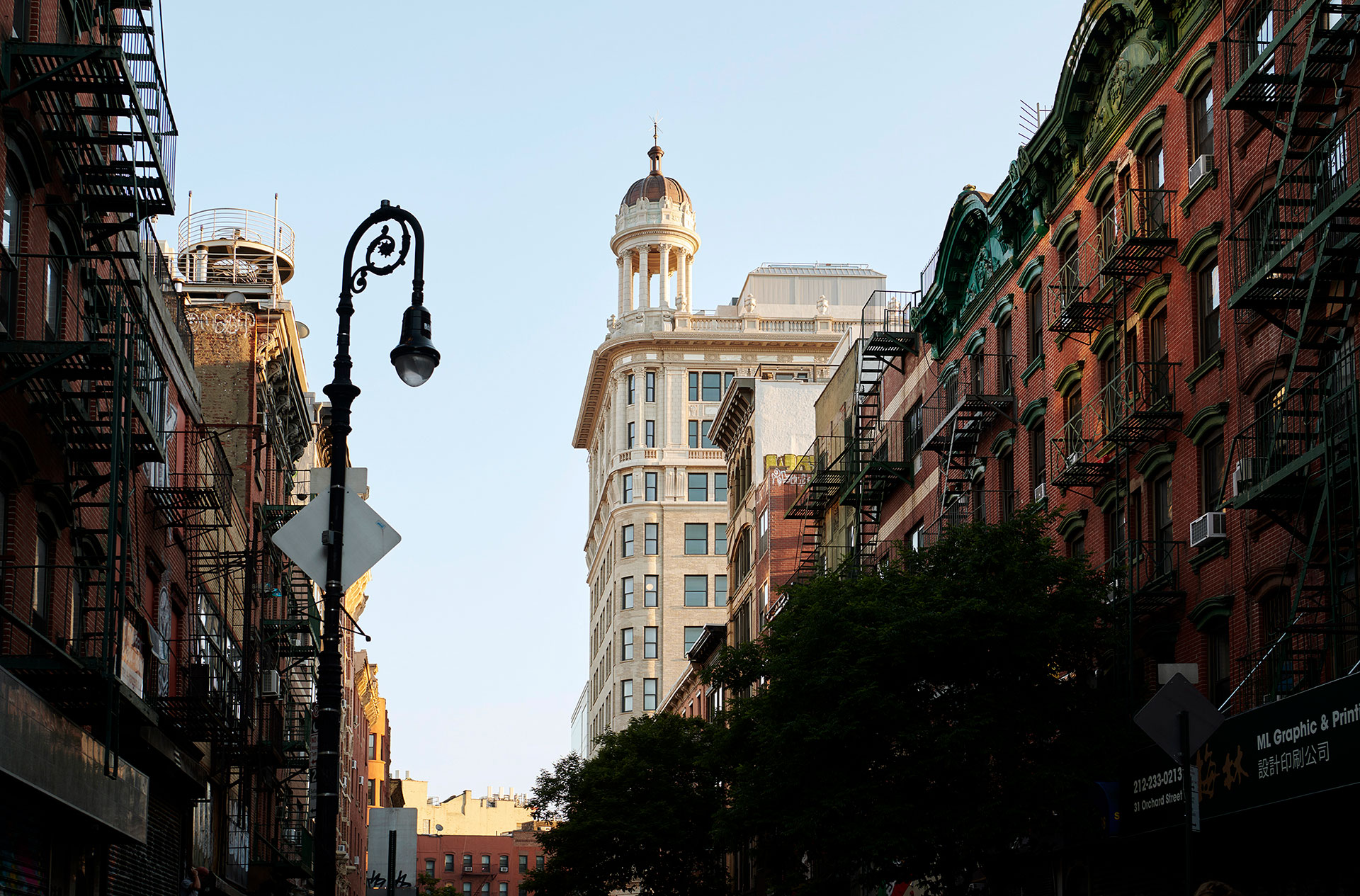 This is a story about a hotel. But in 2022, it’s hard to tell the story of Nine Orchard without talking about its location, a breathlessly discussed Manhattan micro-neighborhood called Dimes Square.

By the time you heard about Dimes Square, it was already over.

The neighborhood is still booming, of course, but what was once an organic meeting ground for skaters and artists and journalists and gallerists is now a magnet for tourists who’ve only recently learned of it. There’s been a vibe shift, to use the parlance of our times. Google “Dimes Square” and you’ll find dozens of articles about the transition. It’s a typical New York story of gentrification and the thing that happens after, when a place becomes too popular and no one can afford to live there anymore and the new crowds come for the wrong reasons, chasing the fumes of an earlier, more eccentric scene. It’s almost painful in its predictability. But as history has shown us, it can be the perfect place for a hotel.

And what a beautiful new hotel Nine Orchard is.

On most maps, Dimes Square resides in Chinatown, historically part of the Lower East Side. Chain stores are few and far between. Boutiques and trendy outlets sit behind classic facades; Chinese lettering mixes with English. And then, rising above the row homes and tenements, a tripartite limestone and beige brick building towers over the neighborhood. This is Nine Orchard. Comfortably incongruous with all the other goings-on, the hotel isn’t a case of development outpacing its community. The building at 9 Orchard St. has always been out of place; a century-plus of elegant dissonance that helped it earn official landmark status.

“It appeared on the scene as the tallest and fanciest building in the neighborhood,” goes one history of 9 Orchard Street, “offering a taste of uptown living to a … downtown crowd.” Built in 1912 and recently restored to its former elegance by the long-awaited Nine Orchard hotel, it’s not just the exterior that sets this place apart from its contemporary neighbors. The gorgeous, sunny restaurant by critically beloved chef Ignacio Mattos seems more like something you might find in the West Village. And the bar, serving 25-dollar cocktails under an ornate, Grand Central–style ceiling, might seem more at home near its cousin in midtown. But this is, without a doubt, a return to form and feeling for a long-neglected building.

The letters above the tinted double doors still spell the name of S. Jarmulowsky. A Jewish immigrant who made his fortune selling discount steerage tickets to passengers across the Atlantic, Jarmulowsky’s banks were the gold standard for tenement-bound New Yorkers who didn’t have the credit to run their finances anywhere else. After a career of unparalleled success, the commissioning of this building was the pinnacle of Jarmulowsky’s life’s work. A “showcase of what an immigrant could achieve,” set amidst the slums.

The Nine Orchard hotel deserves endless credit for the building’s renaissance. When the hotel team found it, the former bank had been ravaged beyond imagination. A false ceiling hid the former bank lobby’s true top, and when they broke that down, they found the gorgeous white detailing had been swathed in baby blue paint. An architectural historian used one of the very few remaining photographs as a reference to direct the restoration as faithfully as possible.

The result is a true gem. Guests enter into a small and quiet lobby. Look up, and the ceiling is low and smooth. Turn right, however, and you’ll enter the historic bank lobby in all its vaulted wonder. A clever choice, the hotel gets the best of both worlds. Guests enter an intimate space, while the neighborhood has access, through another entrance, to the high-end cocktail bar and neck-craning view of Jarmulowsky’s New York fantasy.

On the upper floors, guest rooms take the place of what were once manufacturing lofts. Today, they’re gorgeous spaces full of custom furniture (much of it based on one-of-a-kind found antiques), high-end sound systems, and references to the Lower East Side. Turndown service brings cookies by Mel bakery on Division Street; volumes from Sweet Pickle Books on Orchard decorate the windowsills. The concept is meant to evoke something like your own apartment in the city. Room keys come with hefty keychains. An apple awaits on the table when you open the door. 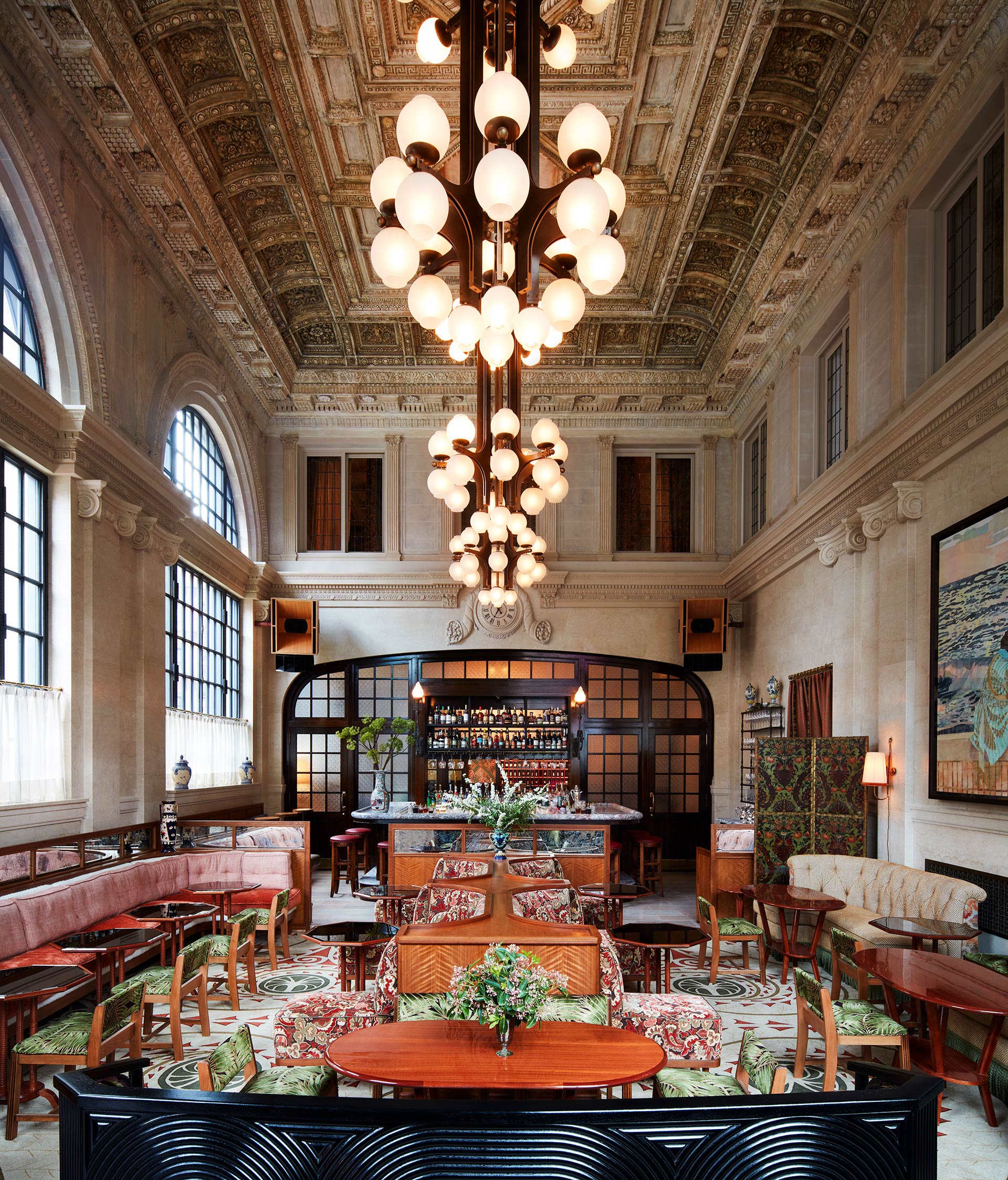 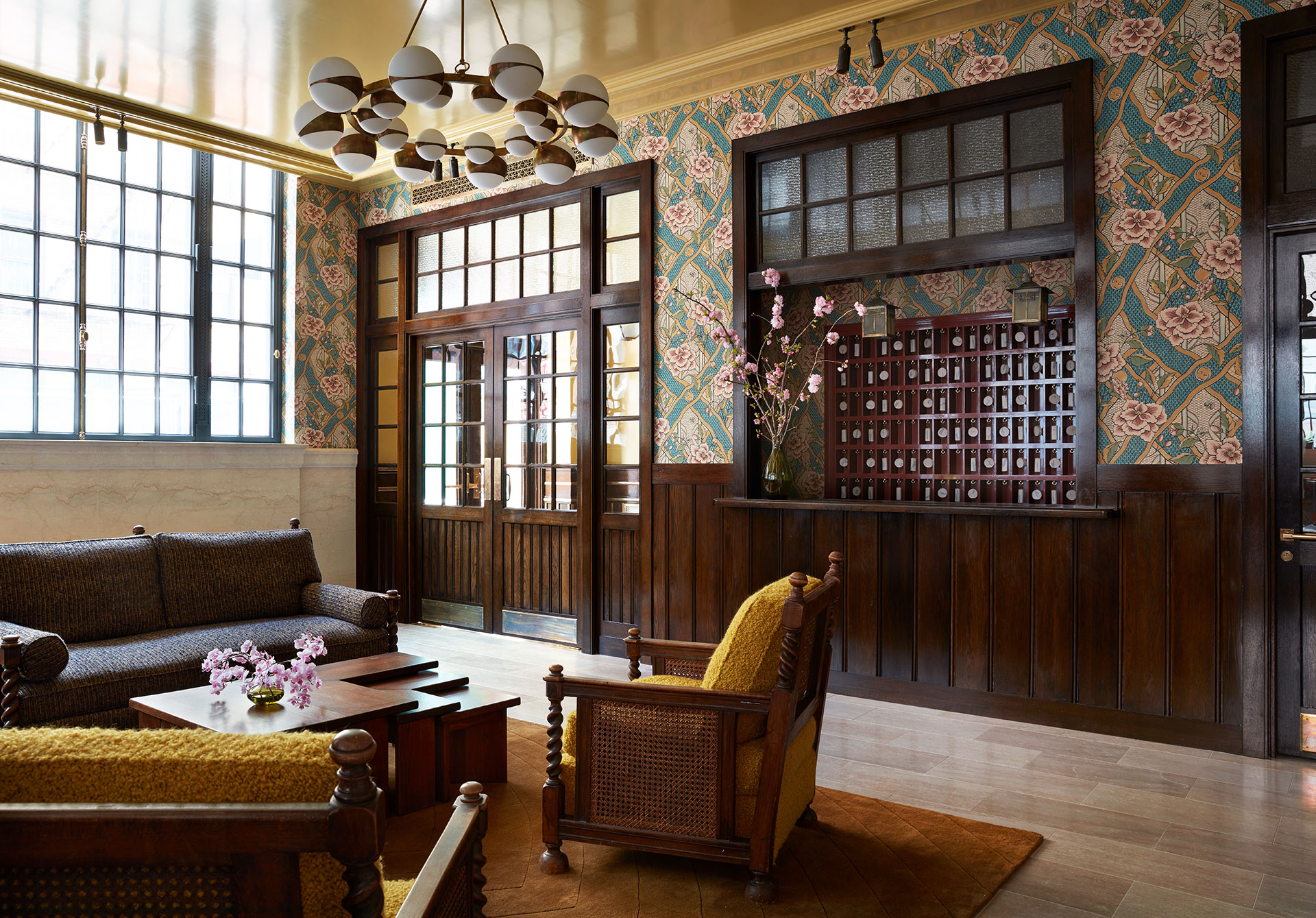 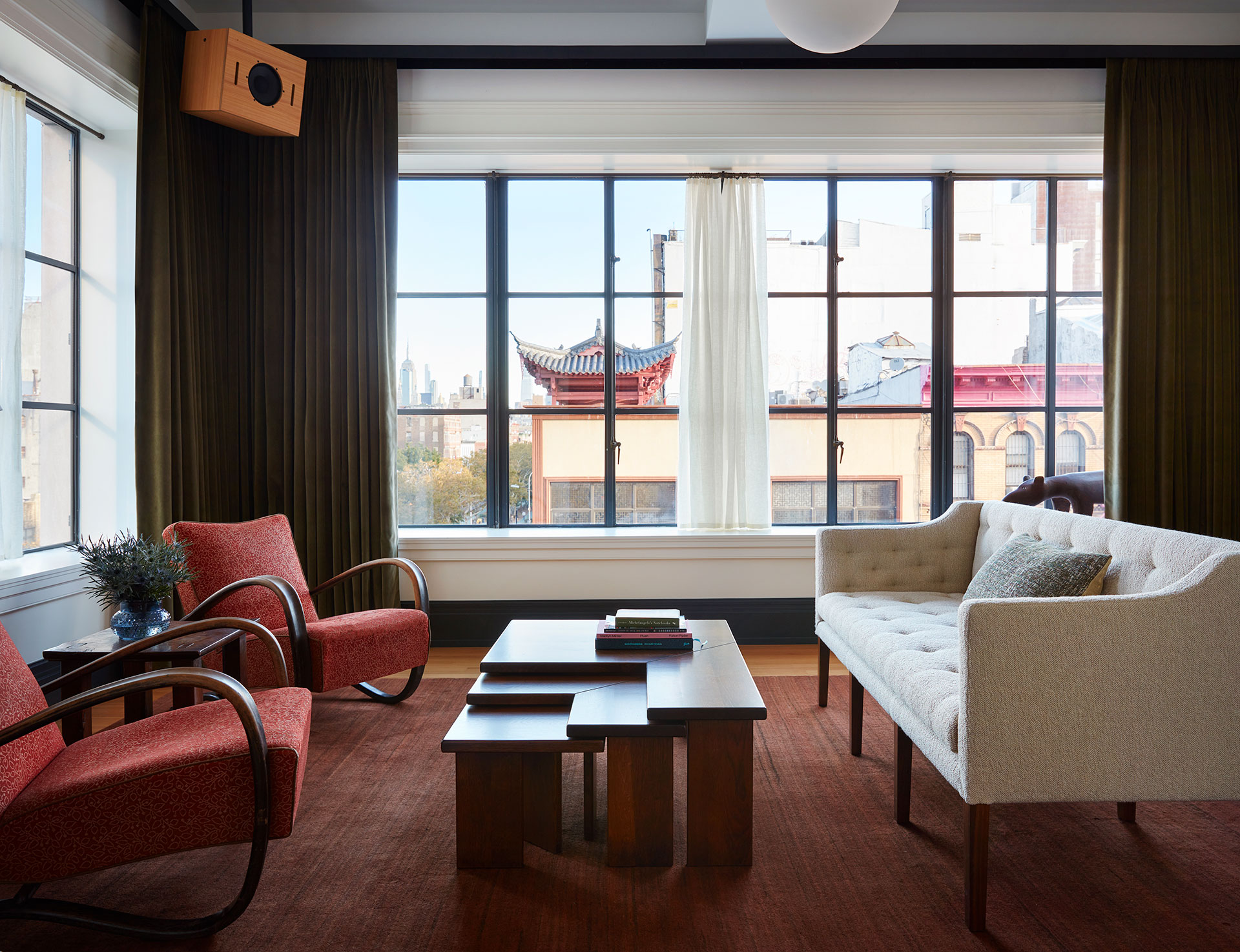 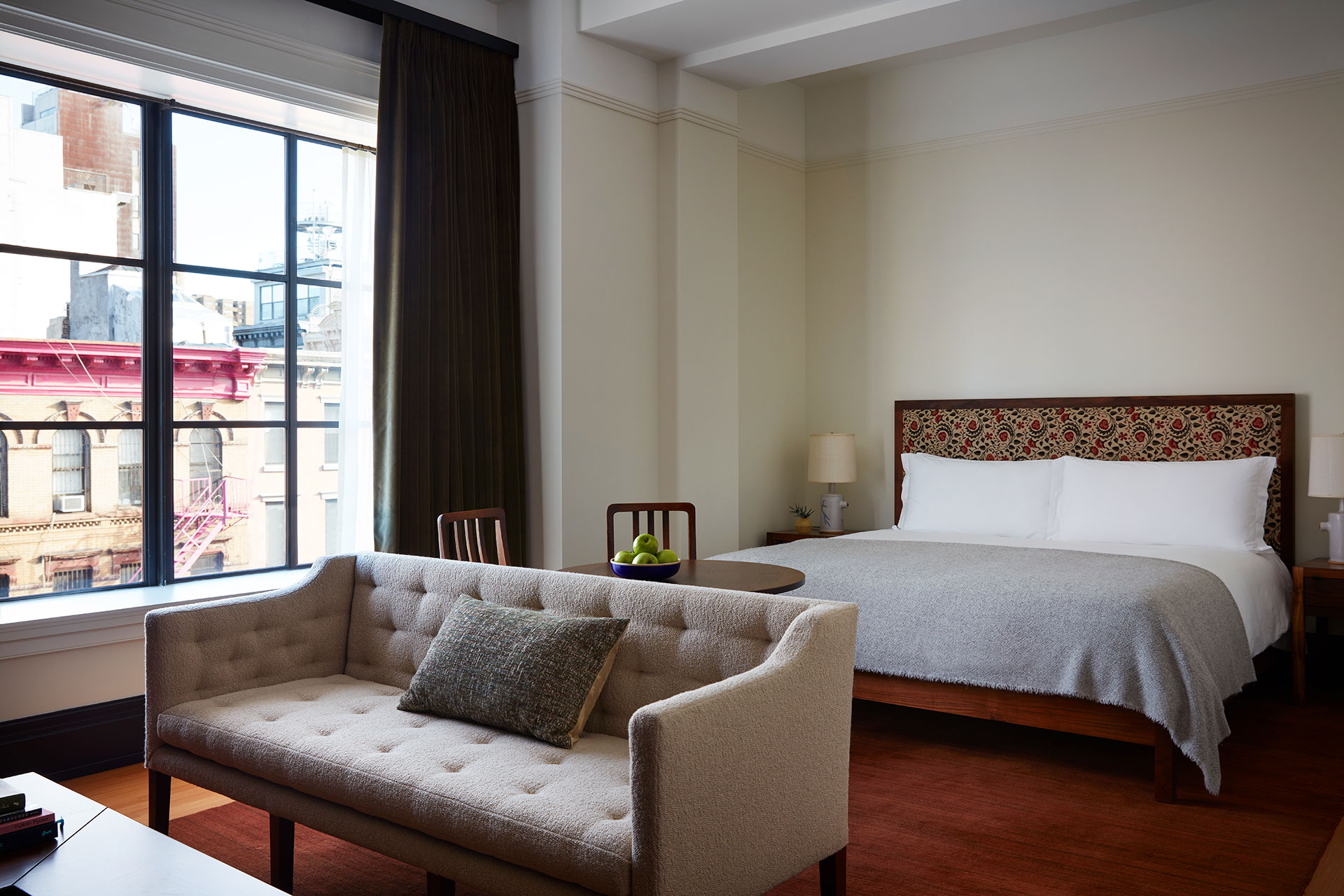 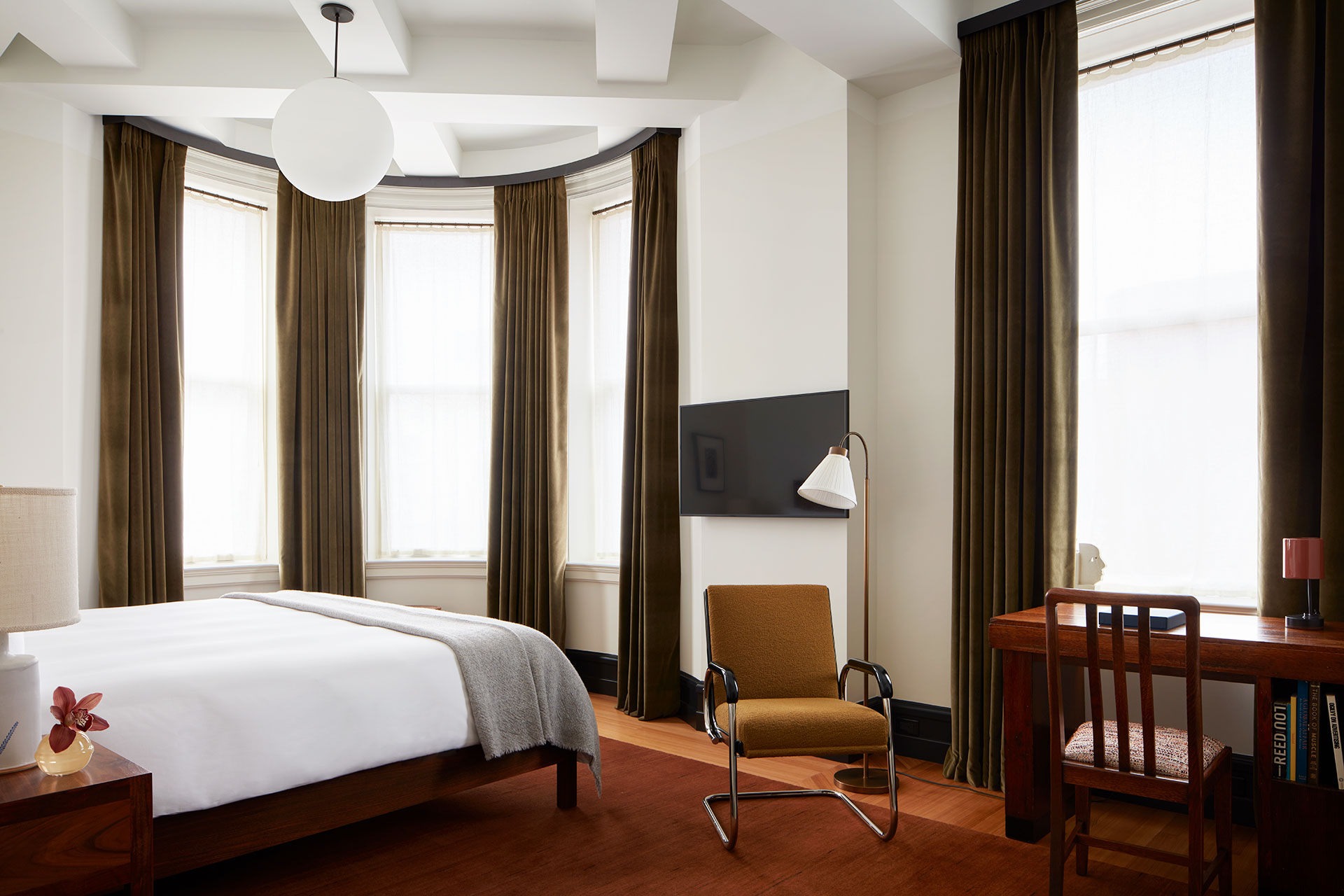 When Tablet visited Nine Orchard this summer, the hotel was still preparing for their full opening. Our king room was a bright, sunny, and glorious perch above the hectic city below, and the tour revealed several massive suites — some with the kind of huge rooms and terraces that would make any self-respecting New Yorker try to guess the square footage.

On the roof, you can see up close what you can see for blocks down below. A replica of the giant domed tempietto that was once removed entirely. Rebuilt with typical fidelity to the original construction, it was this feature that once truly cemented the Jarmulowsky bank as a marvelous outlier in an immigrant neighborhood. “New York buildings like the original Madison Square Garden and the Manhattan Municipal Building had used domed spires before, but this was its first appearance on the relatively modest Lower East Side,” writes the Museum at Eldridge Street. (That museum is housed in the equally architecturally incongruous synagogue, just across the block, that Jarmulowsky helped build as well.) Meanwhile, the Nine Orchard roof, originally meant to host a public bar, has been scaled back to a private event space — in deference to community groups’ concerns over noise pollution. The hotel stands out, but it’s choices like those that have built excitement, rather than dread, over this luxury boutique hotel’s arrival at Dimes Square.

Inside the hotel, you’re largely shielded from the din that defines this neighborhood of New York. The warm, minimalist furnishings are buffeted by a visual motif — the perhaps greco-inspired urns and statues that constitute lamps and decor in public spaces. If you avoid the views of iconic buildings through the windows, the comfort here is so all-encompassing you could imagine yourself almost anywhere. And still, or perhaps for that very reason, it is a hotel that has consciously ensconced itself in its setting and history.

In a Vanity Fair article that asks, rather apocalyptically, What Was Dimes Square?, the piece finishes with a quote of nodding approval. “We signed the lease here in 2005 and we were always told a hotel was going to be there,” said Kama Geary, owner of Bacaro, a nearby restaurant whose atmosphere makes you feel like you’ve stumbled into Venice. “And they did it so well. They’re the kind of neighbors that you want. And it’s a great neighborhood — it was great then, and it’s great now.” 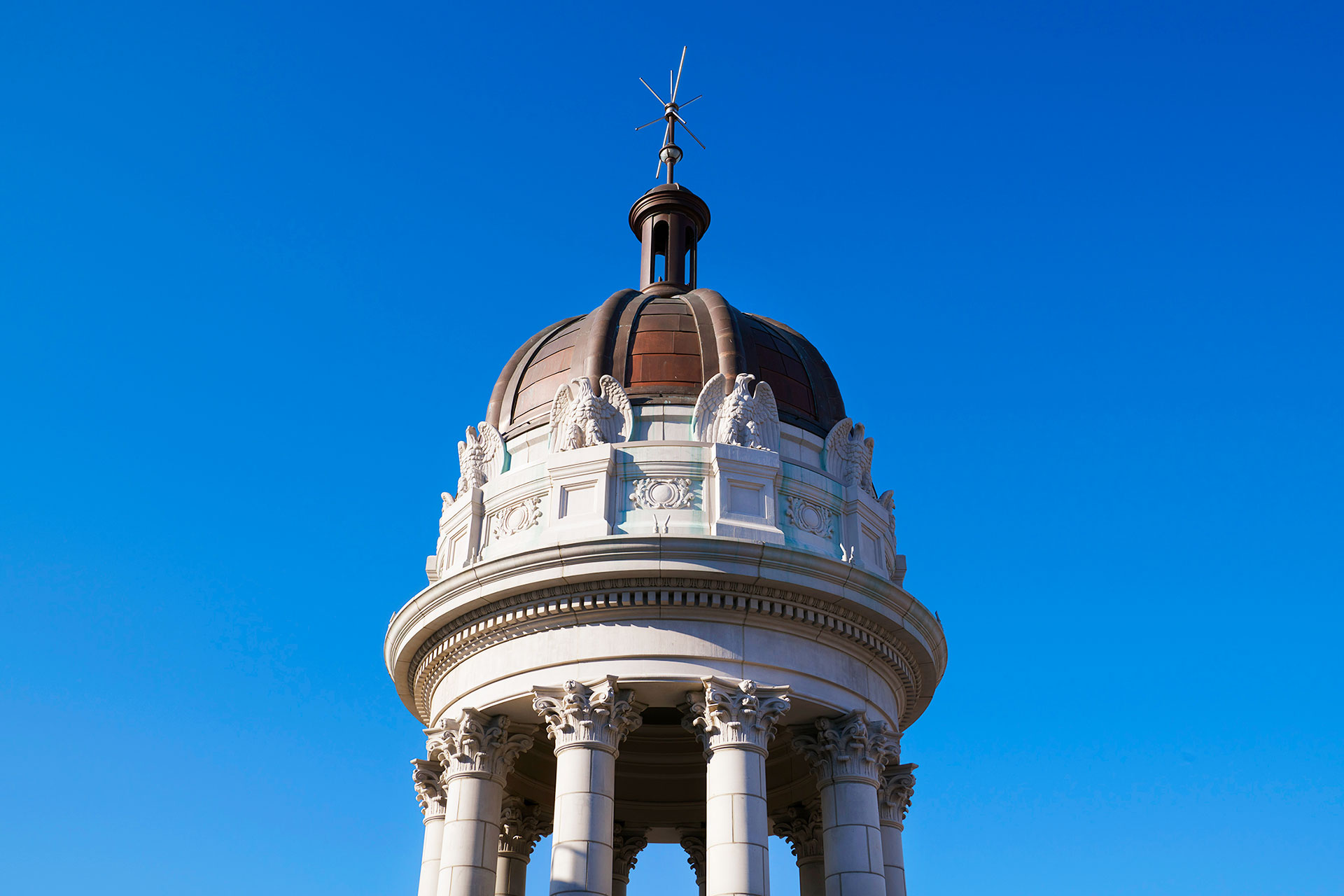