Surely your perception of Canada is not limited to mounties and maple syrup, but just in case it is, here’s ample evidence that the country’s hotel scene is as fashionable and design-forward as any other.

Did you know that the phrase Canadian Tuxedo — meaning jeans with a denim jacket — was created not to describe a favorite outfit of Canucks, but to commemorate the outfit of an American, Bing Crosby, who in 1951 was nearly turned away from a Vancouver luxury hotel for wearing an all-denim ensemble? Levi’s was thrilled by the brouhaha, and sent Crosby a custom denim suit, proudly dubbing it the Canadian Tuxedo.

That story has next to nothing to do with this story about hotels. But if the Great White North makes you think mostly of mounties, maple syrup, and an almost criminal commitment to inoffensiveness, you might be similarly surprised to learn how daring and cutting-edge the country’s hotel scene has become. Far from being restricted to rugged, utilitarian shelters — the hospitality equivalent of flannel and denim — Canada has recently birthed a rapidly growing collection of super stylish, design-forward hotels. Some of which are on display below. 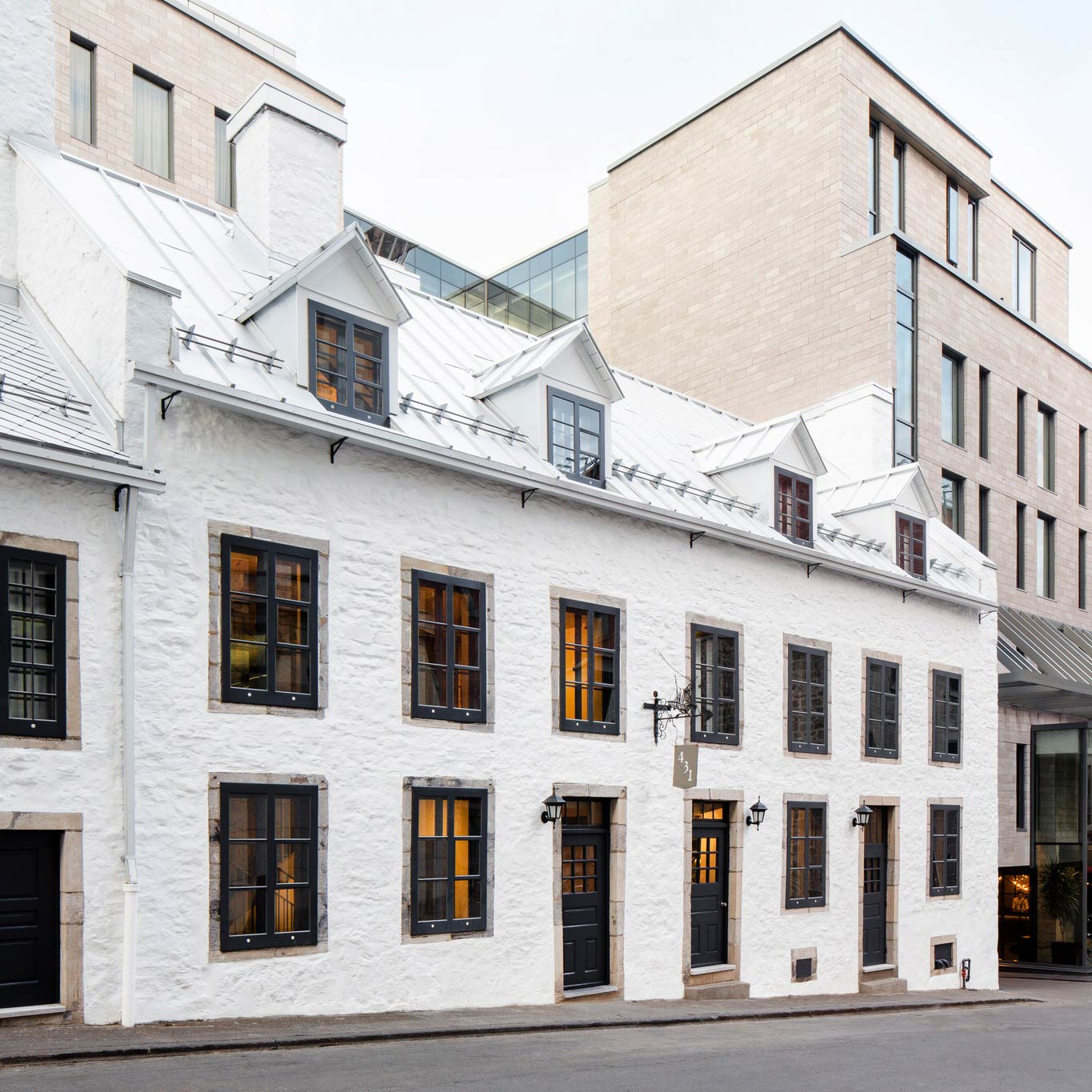 There’s no place in North America with more historic character than Old Montreal — which means that a design hotel like the William Gray, made from a pair of 18th-century heritage buildings and a contemporary addition, gets maximum impact from its stylistic contrast. Once you’re inside the modern section, with its soaring glass atrium, it’s clear that you’re in for a 21st-century luxury-boutique experience. 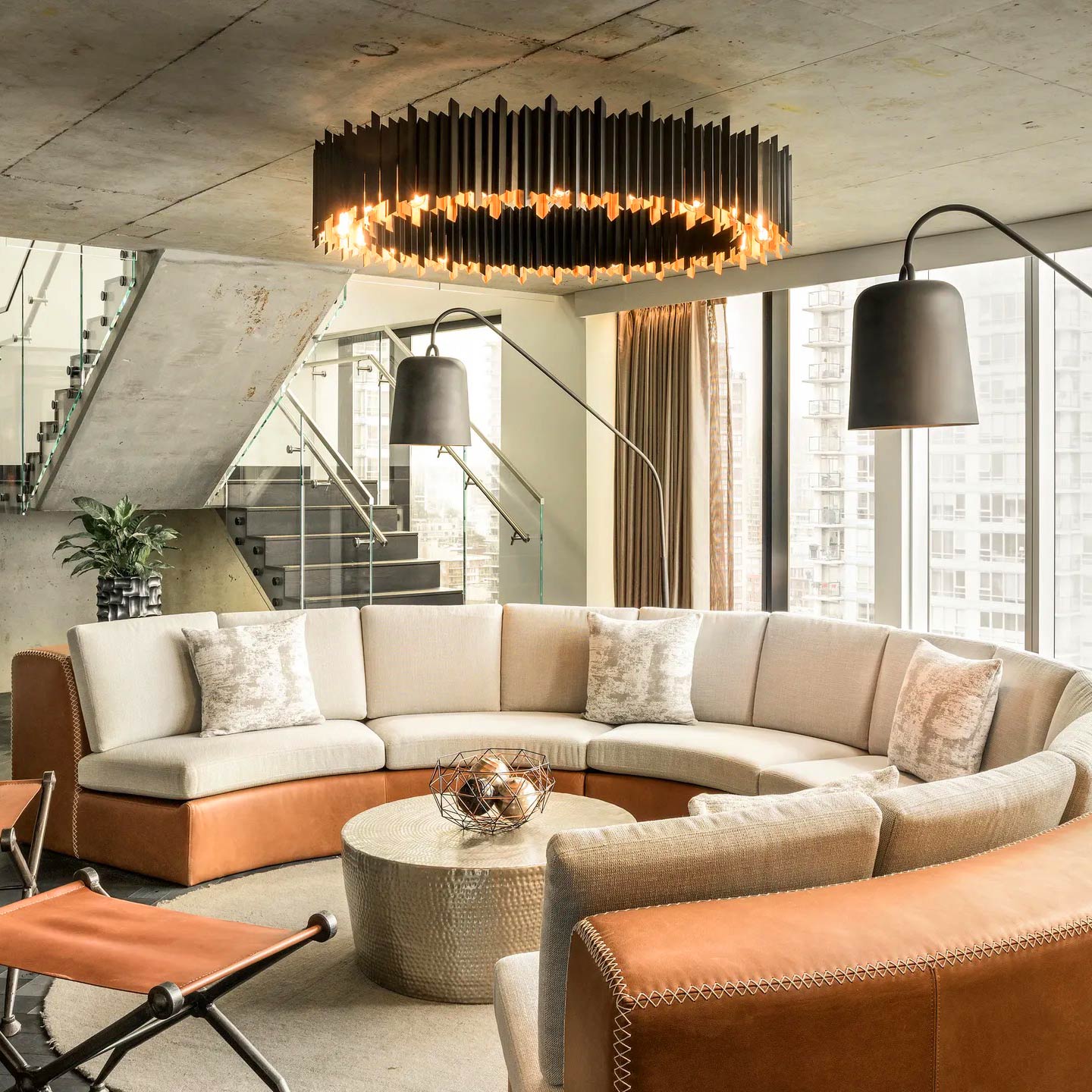 Just to the east of Vancouver’s hip Yaletown district is Parq Vancouver, a mixed-use entertainment and hospitality development right alongside BC Place, the city’s major-league soccer and football stadium. Set in an eye-catching modern glass tower, the Douglas is a luxury hotel with boutique-hotel aspirations, its interiors a mélange of classic modernism and quasi-industrial loft aesthetics. 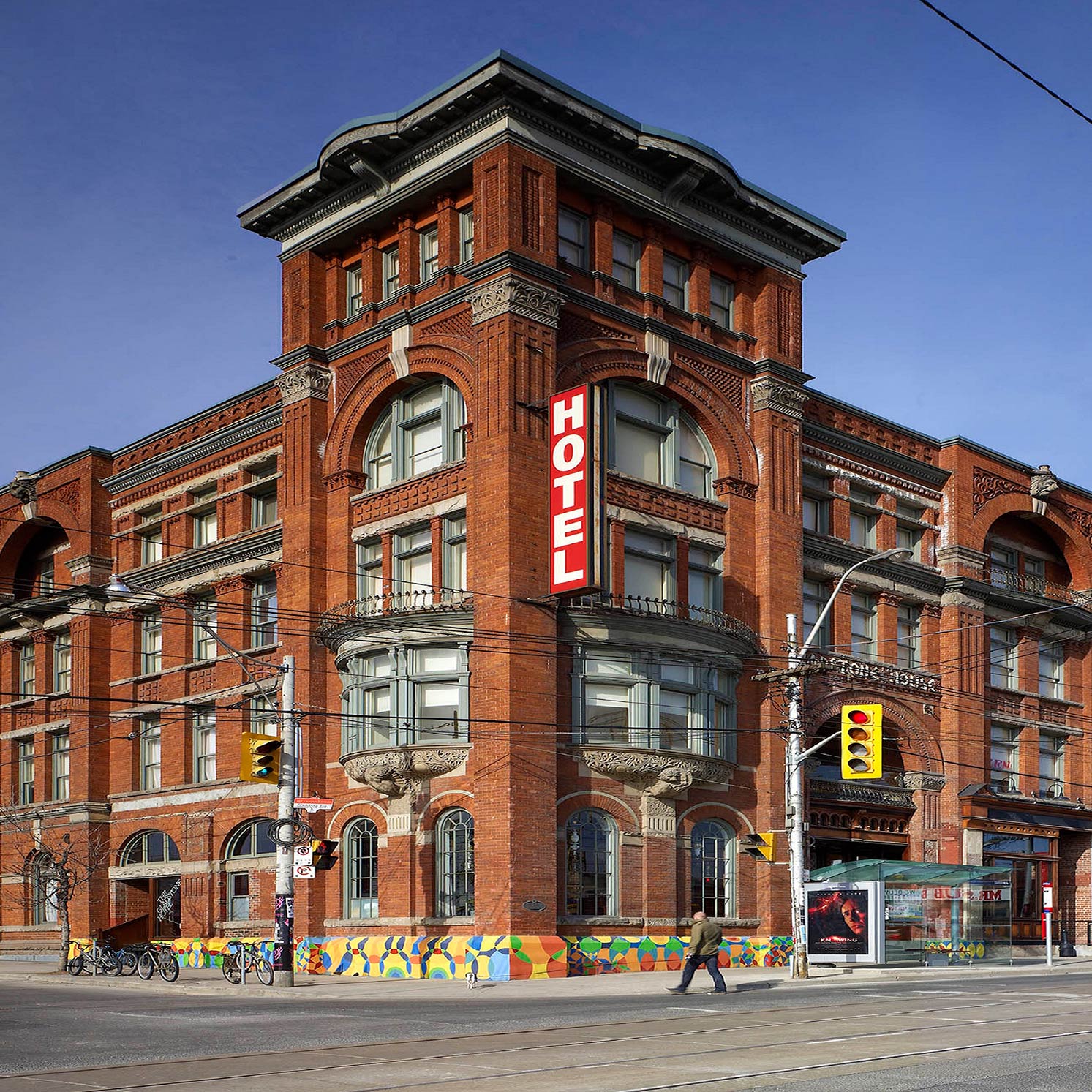 It’s a case of good things coming to those who wait. This gorgeous red brick Victorian hotel had its heyday during the era of the trans-Canada railway, and while it fell into disuse for a while, the rebirth of Queen Street West means this site is suddenly in great demand. Fortunately it fell into the hands of owners with a firm grasp on what this neighborhood’s about — the renovated Gladstone is an artists’ hotel par excellence. 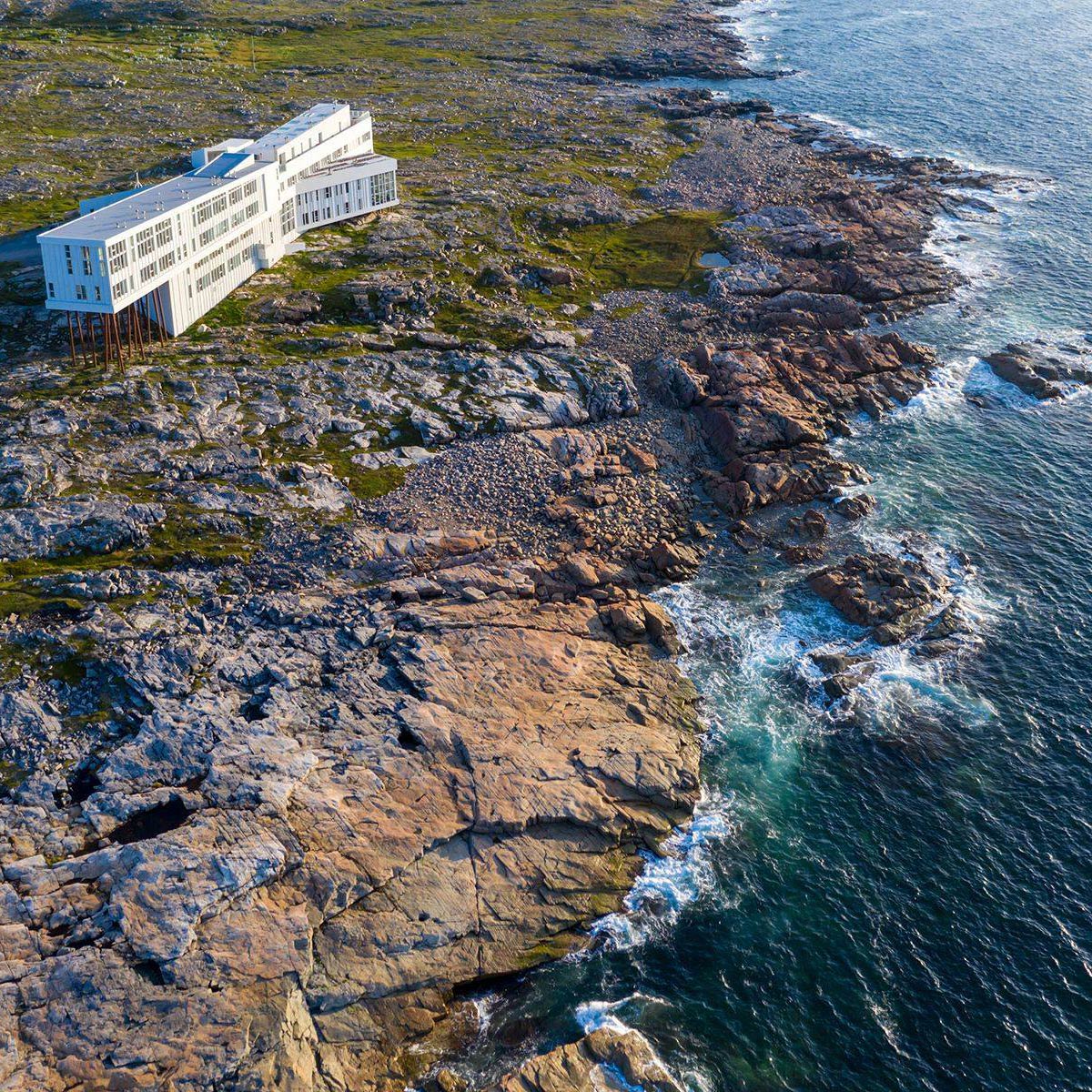 Perhaps the only thing stopping the Fogo Island Inn from becoming the most famous high-design luxury hotel in the world is its far-flung location, on a tiny island off the coast of Newfoundland, closer to Greenland than to Montreal or New York. Of course, its remoteness is key to its appeal, along with its architecture, an ultra-modern reinterpretation of traditional, utilitarian Maritimes architecture.

The Scandinavian concept of the ice hotel exists in only one place in North America: Saint-Gabriel-de-Valcartier, Québec, the home of the straightforwardly named Hôtel de Glace. From January through March its extravagant igloo-style buildings contain some 85 guest rooms, whose beds are dressed not just with blankets but with furs and sleeping bags as well; some of the high-end suites come with fireplaces, and a few even have a hot tub and a sauna. 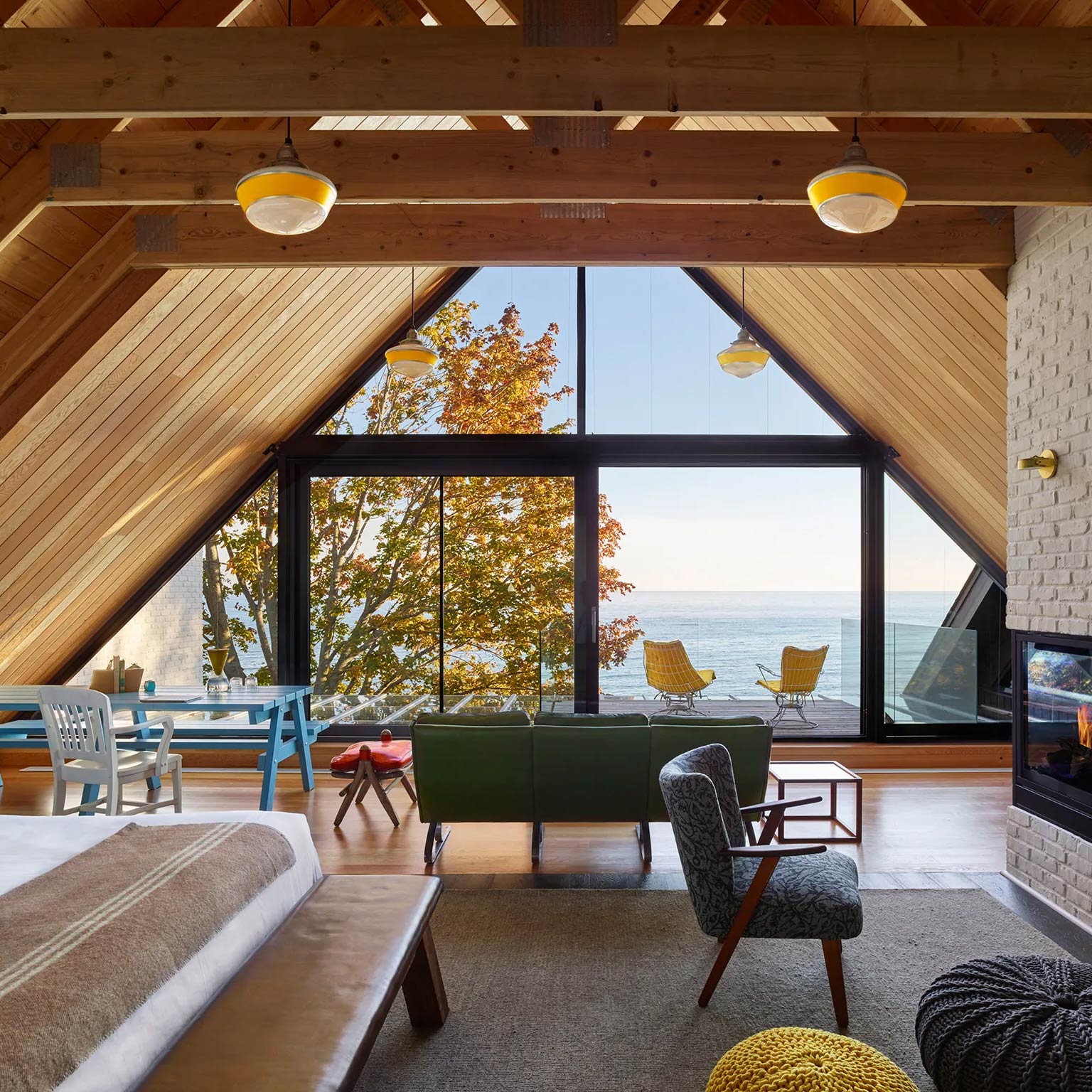 Two hours east of the Drake Toronto, in the Prince Edward County town of Wellington on the shores of Lake Ontario, Drake Devonshire is full of personality: a 19th-century foundry transformed into a 21st-century farmhouse hotel, full of contemporary artworks and inspired modern design. The twelve rooms and suites range from the cozy Stargazer, with an oversized skylight as its only window, to the lavish A-frame Owners’ Suite. 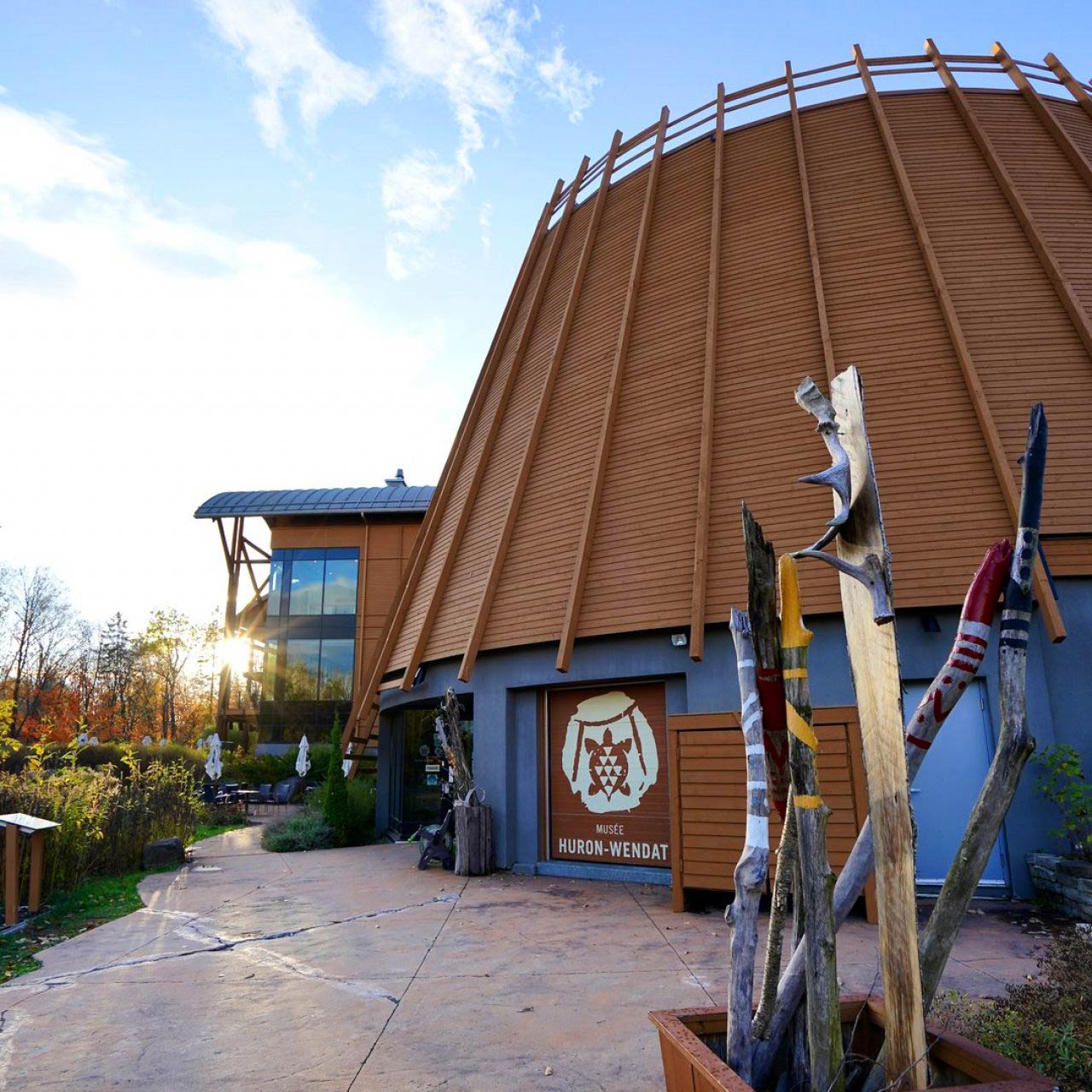 There’s nothing else quite like the Hôtel-Musée Premières-Nations. Here the lodging is attached to a museum dedicated to Canada’s First Nations history and culture, which comes complete with an authentic Iroquois longhouse. It’s set on the Wendake reservation, close to Québec City but far enough to feel like a proper escape — a sensation that’s only heightened by the comfort of the resort-style rooms. 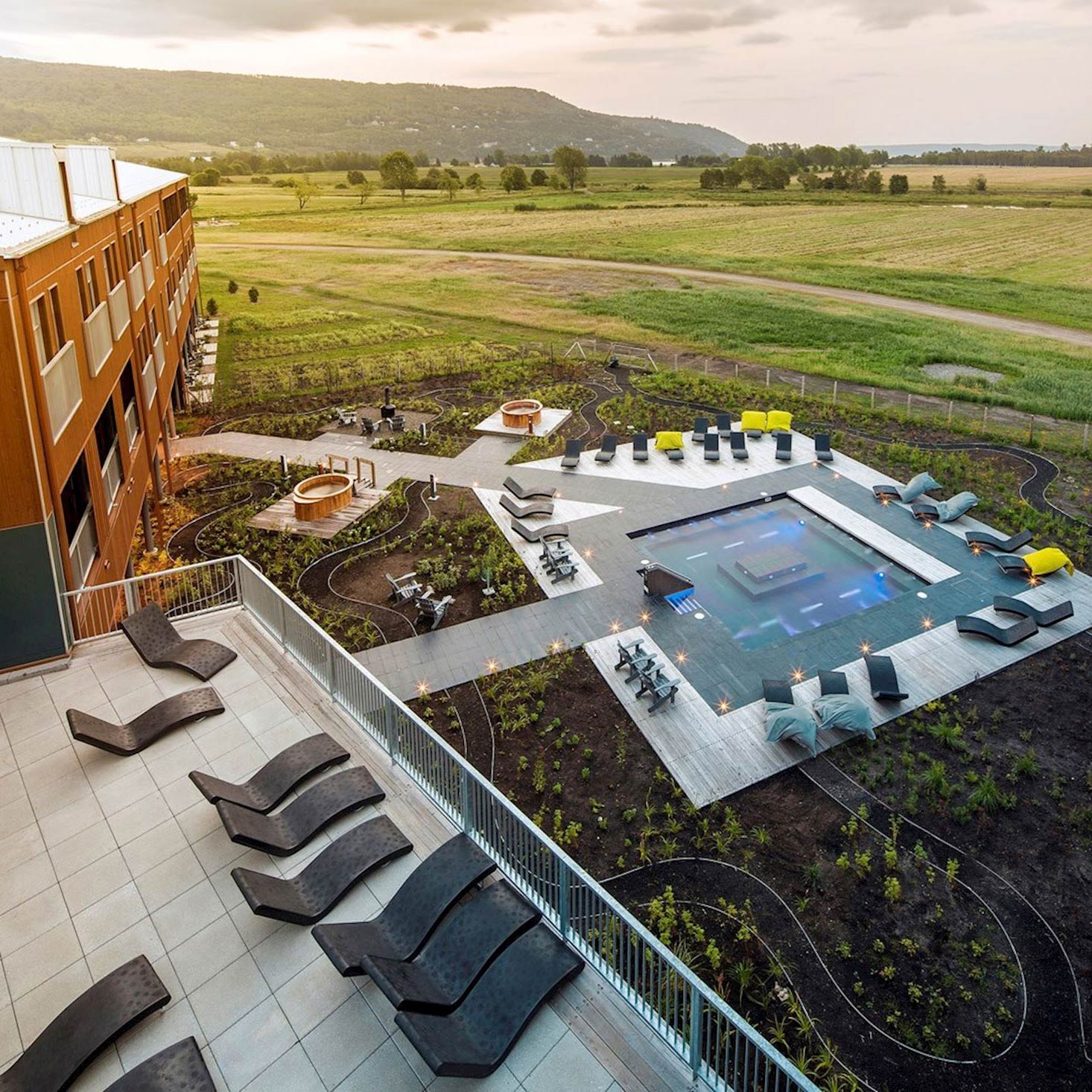 Though Le Germain Charlevoix Hotel & Spa is set on a working farm and runs its own farmers’ market during the summer months, the hotel itself is as modern as they come, proof that today’s travelers don’t see any contradiction between comfort and contemporary design. Much more than an updated farmhouse, it’s essentially a small village, its 145 rooms spread between five farm-inspired modern buildings. 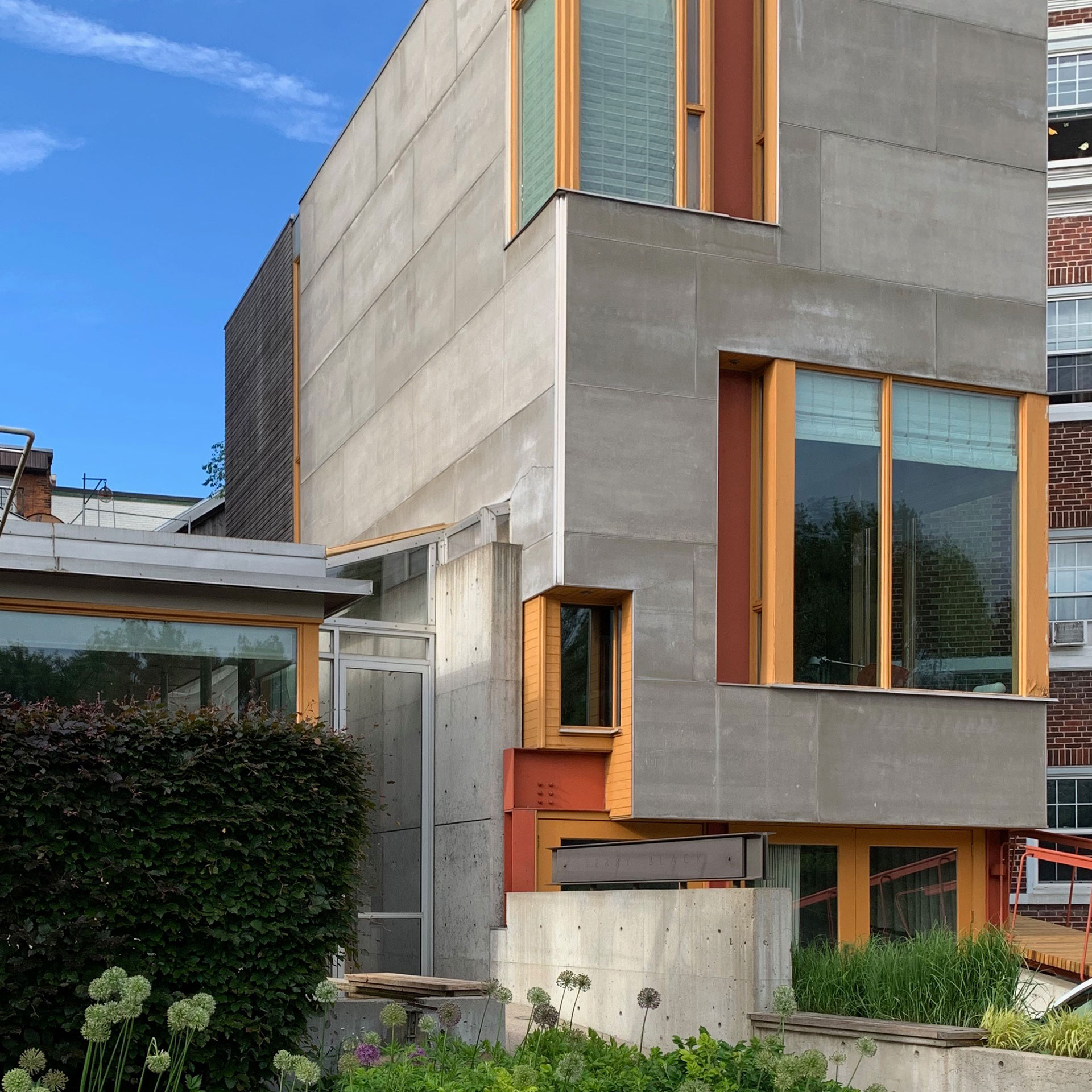 Set a scant minute’s walk from the Avon Theatre, one of the anchors of the annual Shakespeare festival, Stratford, Ontario’s seven&nine was built as a private house, and an extraordinary one at that. Architects Shim/Sutcliffe were inspired by the kind of raw-concrete modernism that recalls figures like Tadao Ando and Alvar Aalto, and the house is decorated with modernist classic furnishings and contemporary artworks to match. 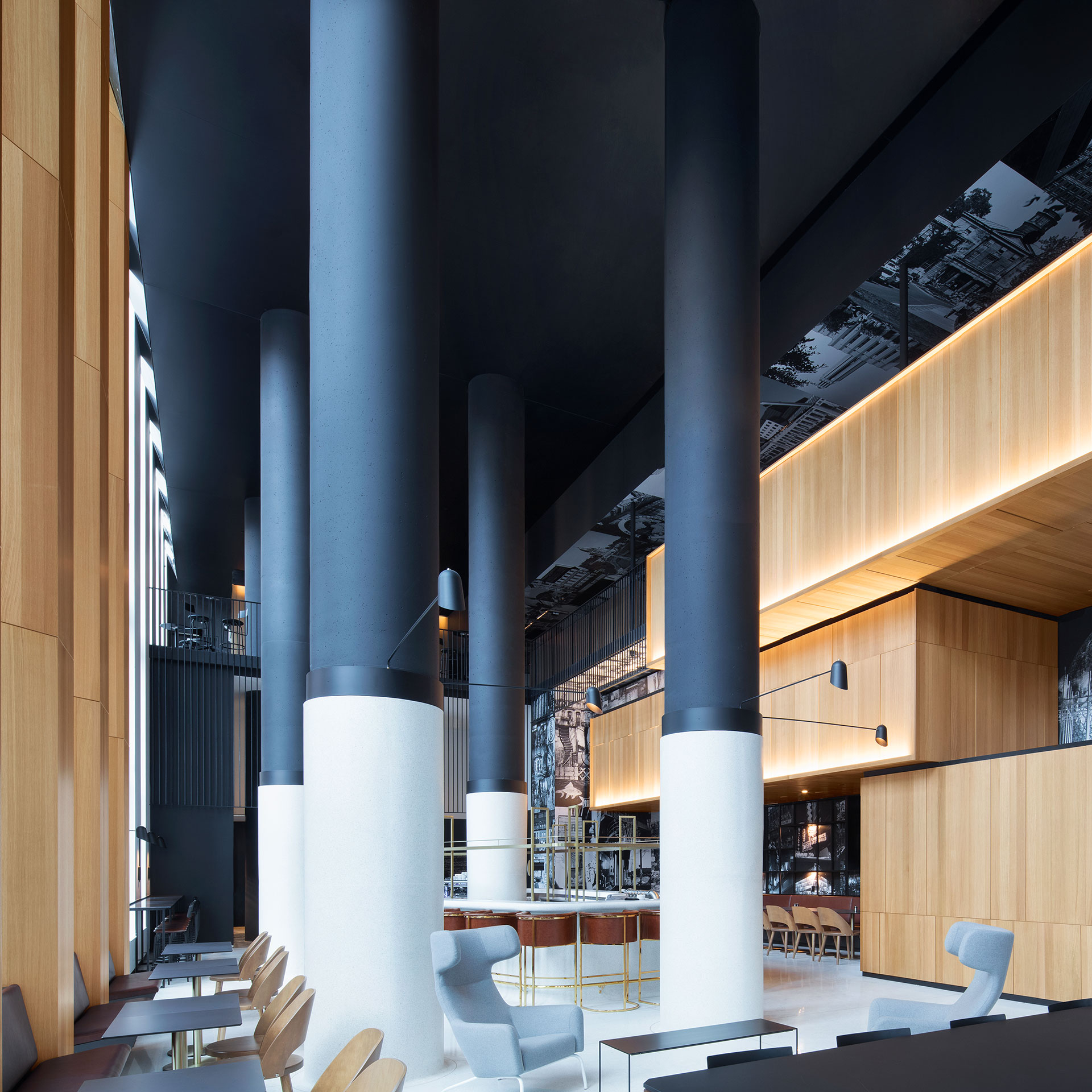 In Montreal’s picturesque historic district, an 18th-century structure conceals the thoroughly contemporary Hotel Gault (a longtime Tablet favorite). For a follow-up, the Gault’s owners have decided to play even more against Montreal’s type with the towering, ultra-modern Hotel Monville, a hotel that’s drawn nearly as much attention for its forward-looking architecture as for its futuristic amenities — specifically, its robot room service. 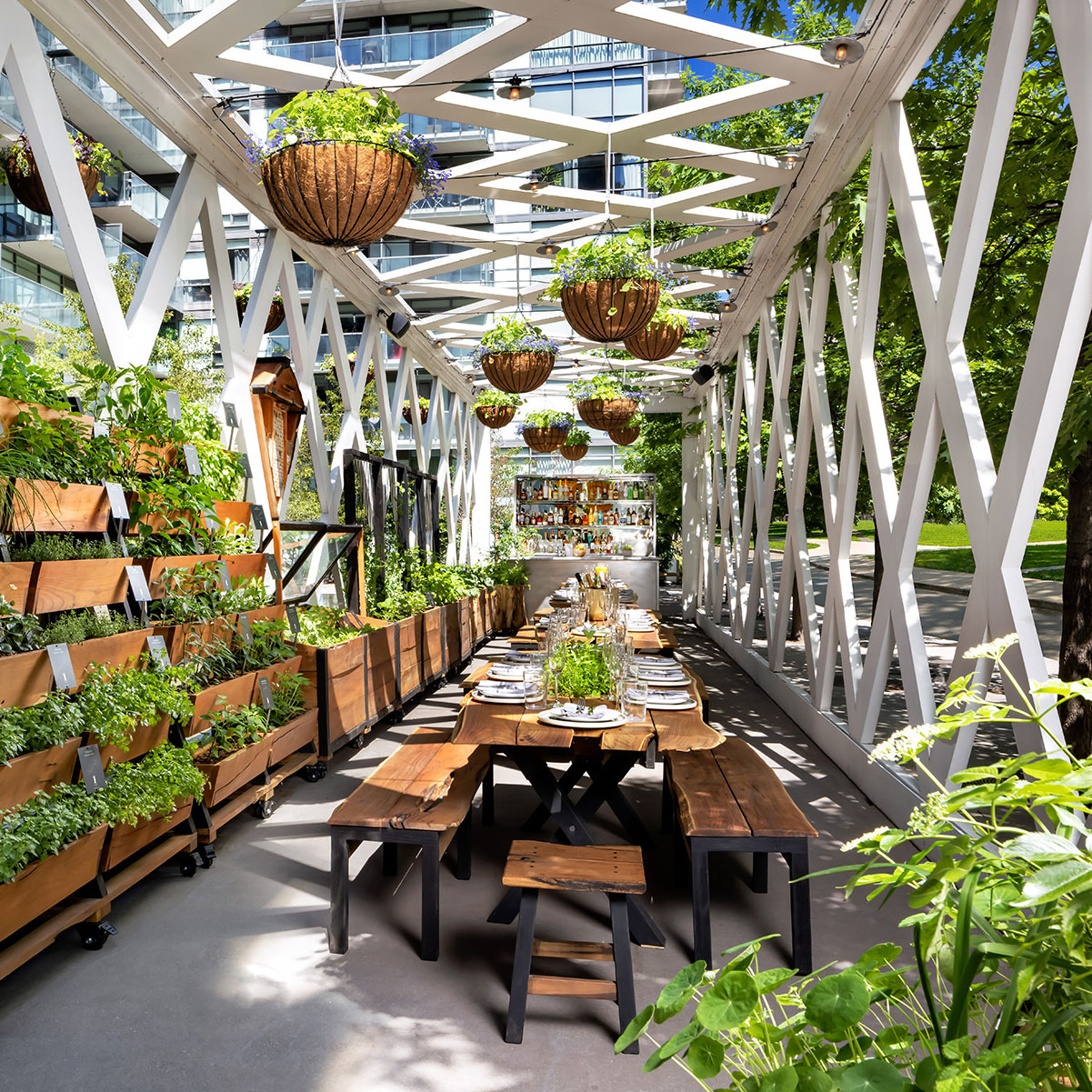 The eco-friendly, high-design 1 Hotels group has arrived in the upscale neighborhood of King West Village. 1 Hotel Toronto features cutting-edge sustainability measures, ultra-stylish interiors, and a handful of popular restaurants and bars, from the farm-to-table 1 Kitchen to the self-explanatory Harriet’s Rooftop bar. The rooms are surprisingly sunny, and their crisp contemporary design is warmed by plenty of organic textures and living houseplants. 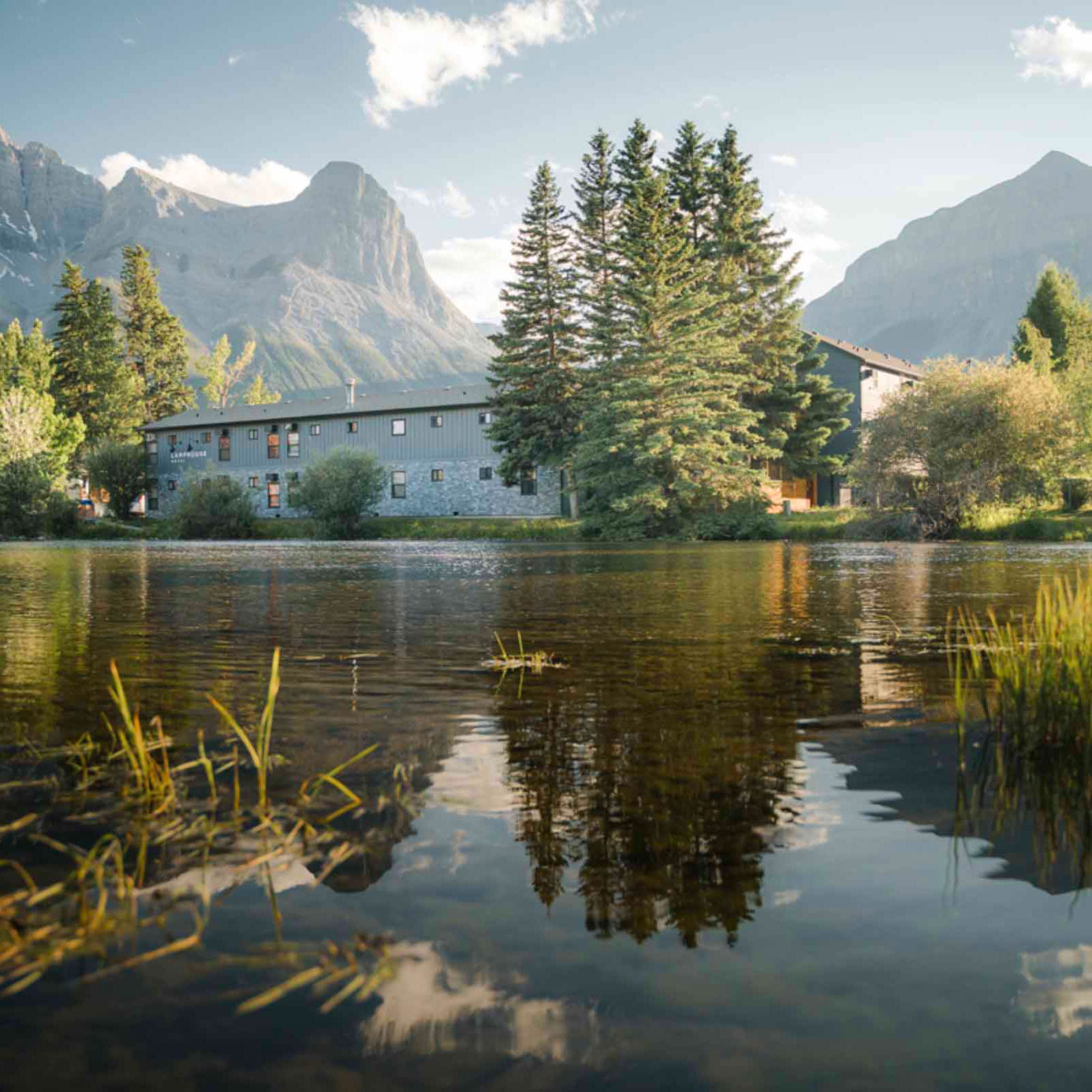 Lamphouse Hotel is a classic mid-century downtown motel renovated, redesigned, and repurposed for the boutique-hotel generation. The interiors embrace the rustic textures of leather and worn wood alongside Scandinavian modernist furnishings, and the rooms come with thoughtful comforts like Nespresso machines and Bluetooth speakers. 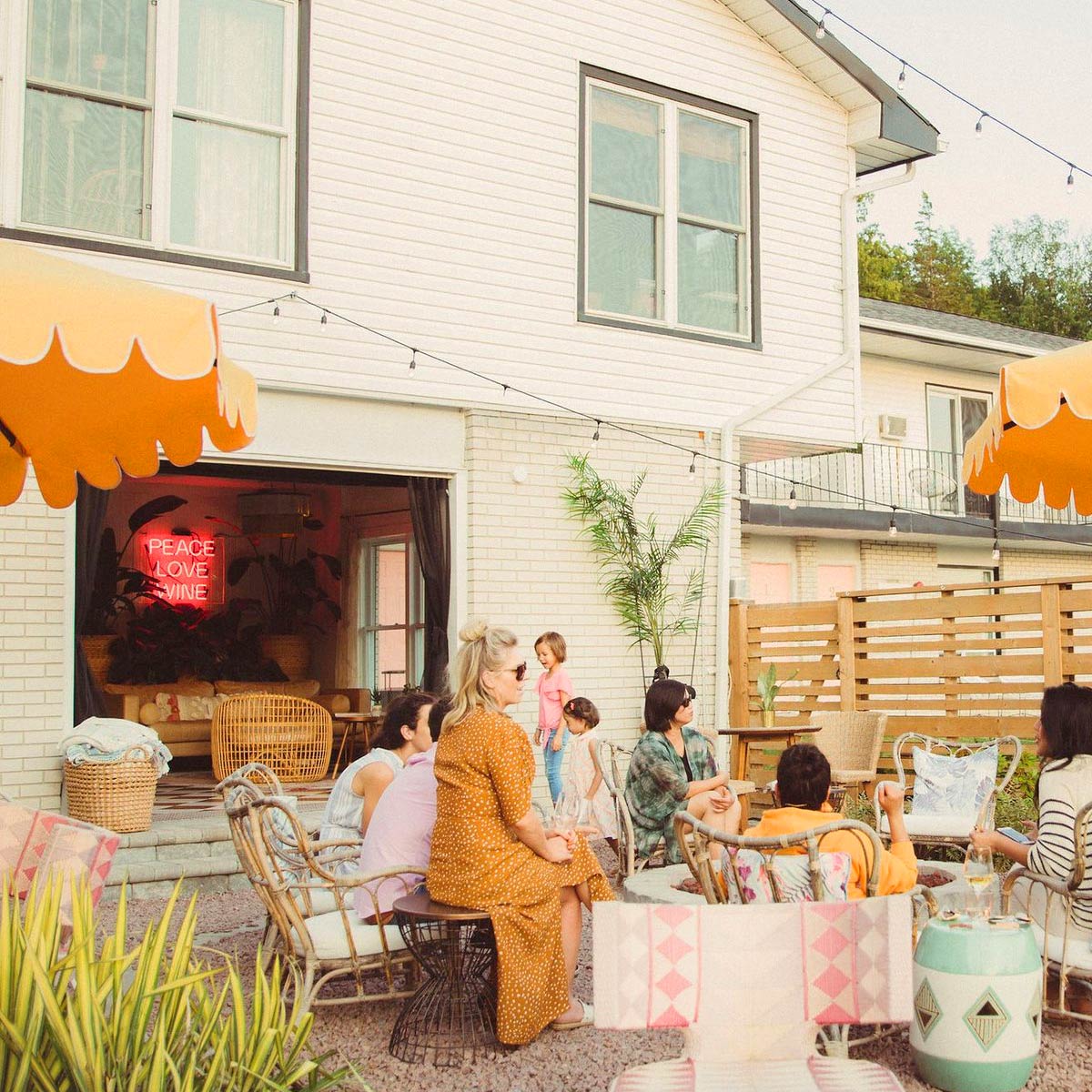 The motel-to-boutique pipeline continues to deliver strong, independent lodgings, this one in the wine country of Prince Edward County, Ontario. The June Motel stands just outside the town of Picton, with views over a protected bay, and its 16 rooms are stylish and photogenic in a playful mod-bohemian way. So impressive was the makeover, in fact, that there’s a Netflix series documenting its proprietors’ second project. 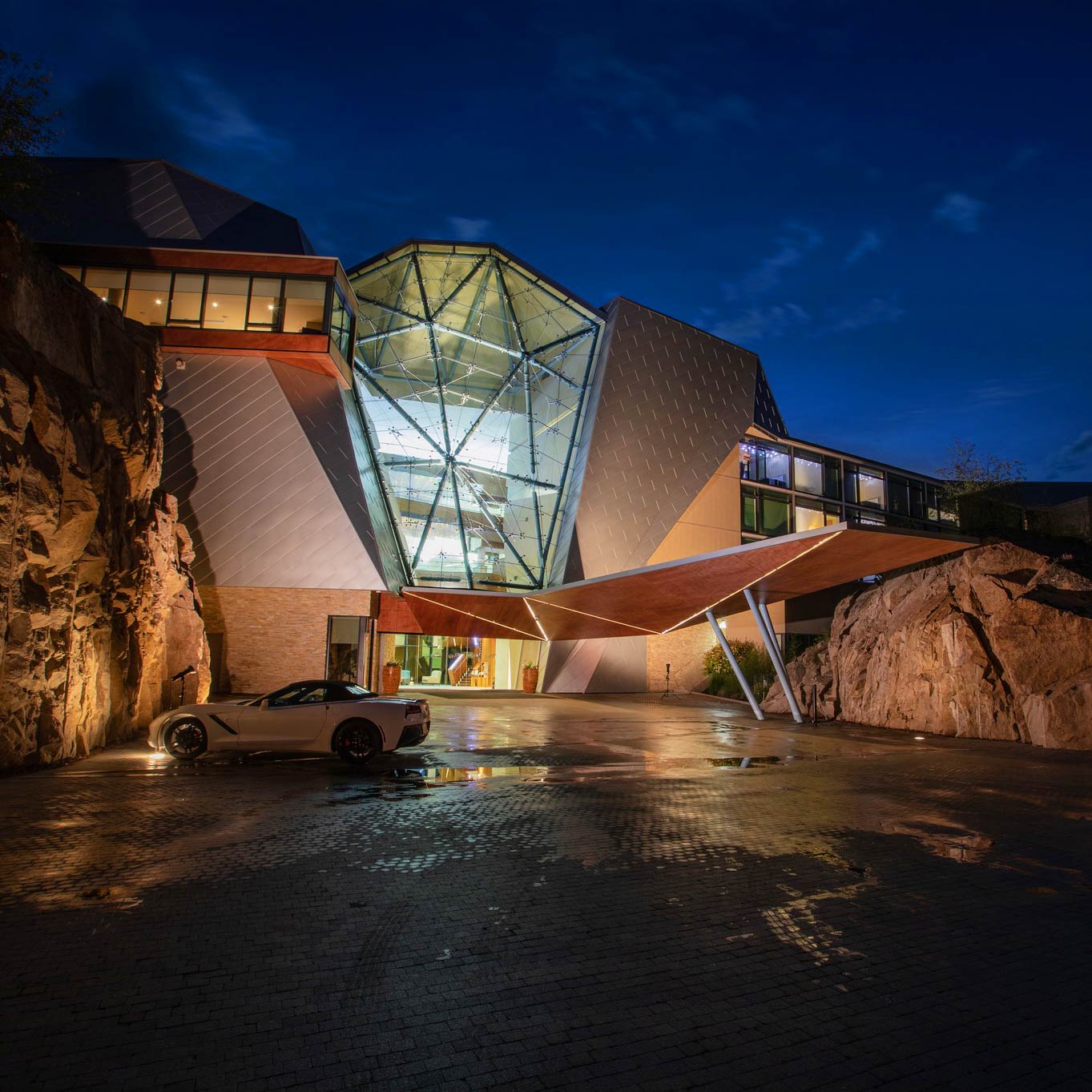 Most Pacific Northwest hoteliers play it safe, perhaps to let the spectacular landscapes and seascapes have the last word. Sparkling Hill Resort, in British Columbia’s Okanagan Valley, is another story — it’s an impressive piece of contemporary architecture, and and an unapologetically luxe one at that. It’s a Swarovski project — hence the abundance of crystals — but it’s focused more on wellness than on glamour. 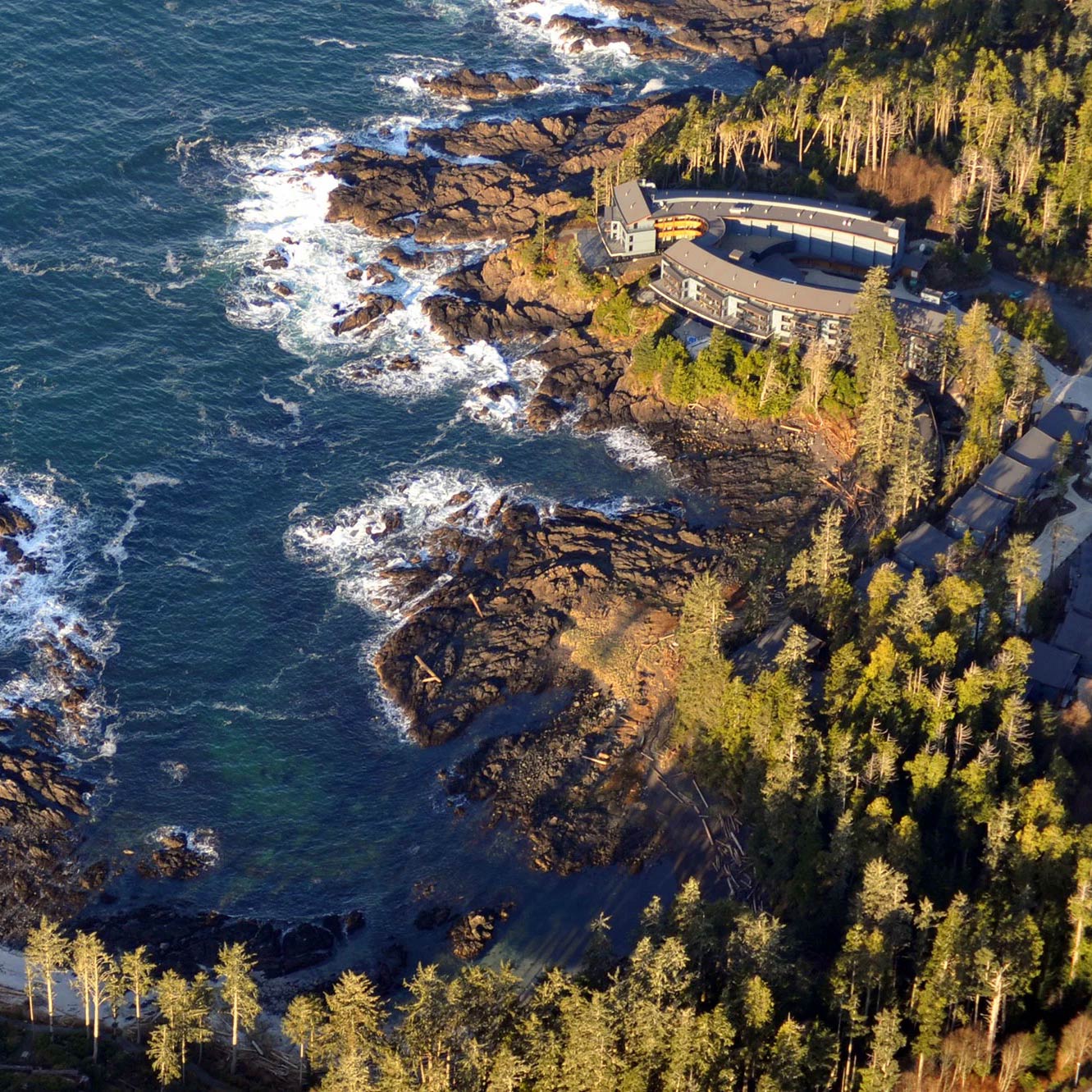 On the theory that there are enough rustic, woodsy old lodges in coastal British Columbia, the Black Rock Oceanfront Resort opted for a more contemporary approach; they hired a big-time modern design firm, the Vancouver/Seattle–based VIA Architecture. It’s a decision that would have to be judged a success; the result is a hotel that’s not just stylish and comfortable, but quite close to the cutting edge in terms of sustainability. 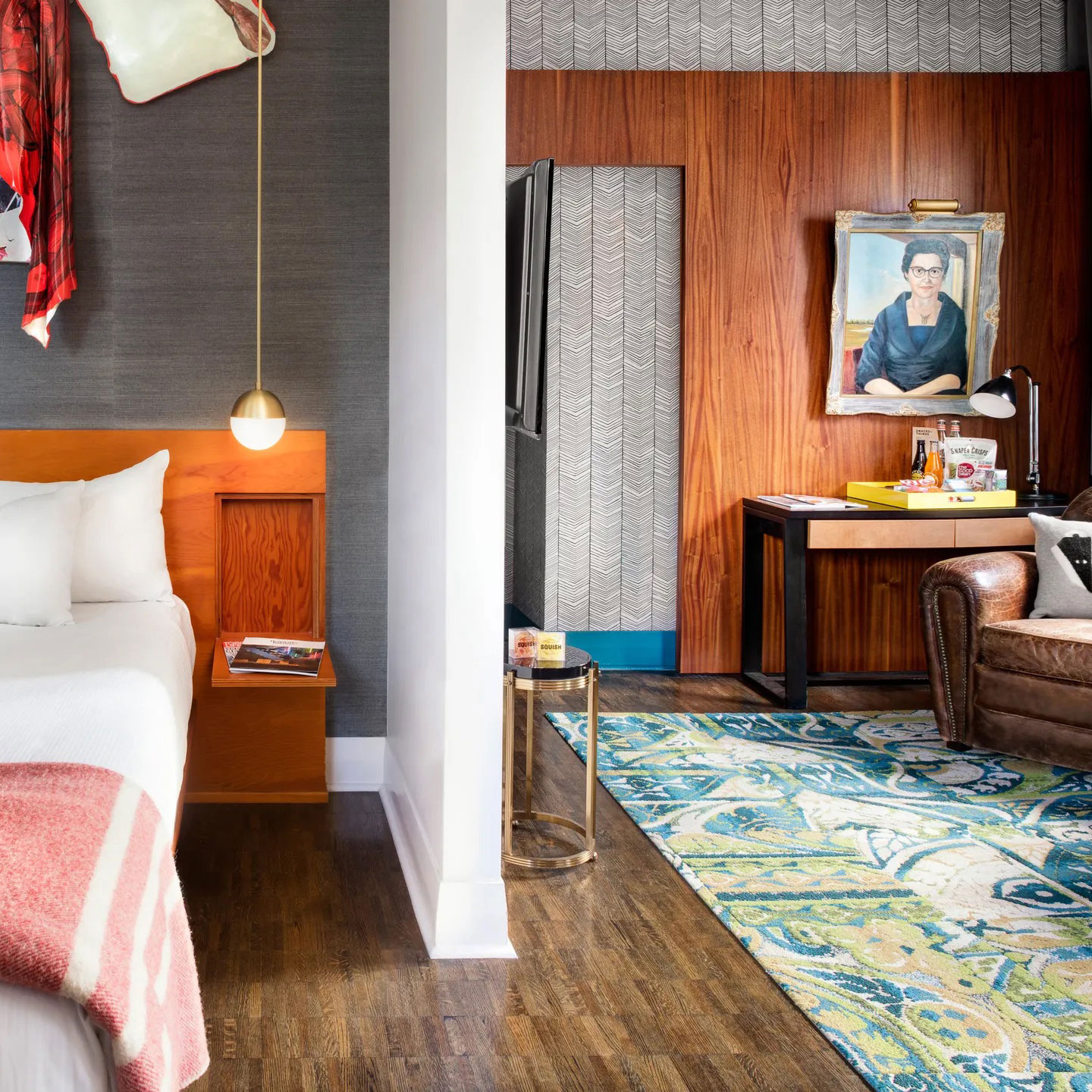 A cult classic in Toronto’s vibrant West Queen West since 2004, the Drake is now twice the hotel it used to be. The original hotel, with its 19 stylish, art-filled bedrooms, is now the Classic Wing, and it’s joined by a new Modern Wing: more of the same, which is a good thing, this time housed in an ultra-contemporary structure by a dream team of architects and designers.