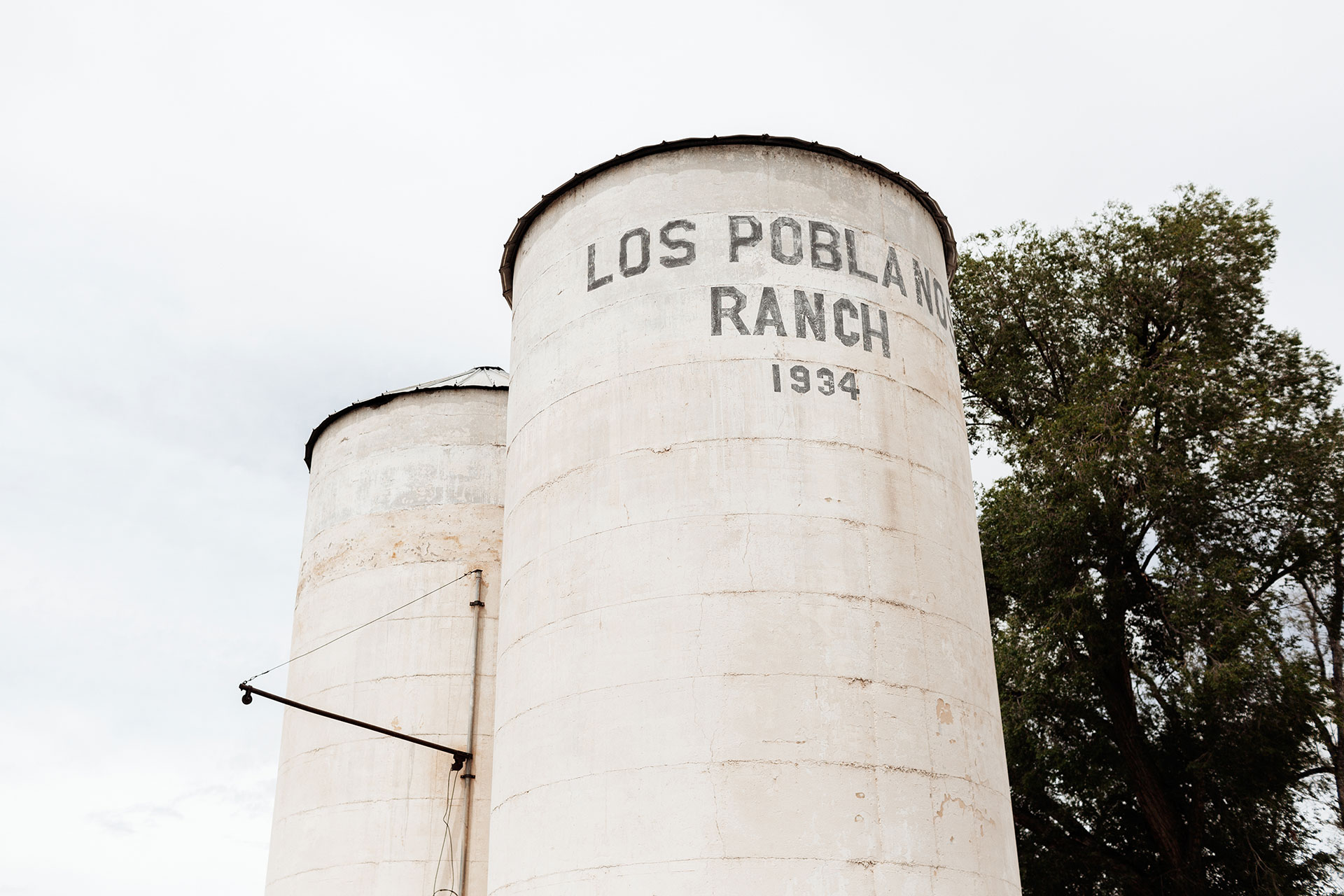 On the outskirts of Albuquerque, Los Poblanos Historic Inn & Organic Farm has built a model for the future from the practices of the past.

Earlier this week we launched phase one of our sustainable travel initiative, celebrating hotels that make a positive impact on the planet and in their community. When it came time to choose a a place that exemplifies those actions, it didn’t take long to settle on Los Poblanos Historic Inn & Organic Farm. We had no shortage of options — thousands of Tablet hotels are taking steps toward a more responsible future. Los Poblanos stands out, though, because they make sustainability seem especially accessible, like it should be the logical goal of any great hotel.

It’s tempting to treat sustainability as an indulgence, a new-age obsession, the domain of the woke and well-off. But that’s backward. Los Poblanos isn’t an opulent eco-resort or a remote spiritual retreat. This is a family-run farm on a centuries-old ranch, ten minutes from downtown Albuquerque. Sustainability is demystified here — it’s common, universal, natural, concerned as much with the social and economic environment as with the ecological one. Los Poblanos wears their mission more like a comfortable old robe than a shiny badge of honor. They aren’t hopping onto some trendy bandwagon. They’re simply preserving the operational models of the past.

To understand how, let’s start with Campo, Los Poblanos’ much celebrated farm-to-fork restaurant.

Campo is considered one of the best restaurants in the country. Its casual fine-dining experience — sourced from local farms and from the hotel’s own organic gardens, fed by compost sourced from kitchen waste — is as delicious as it is sustainable. Serving a style they call Rio Grande Valley Cuisine, the menu now features duck and pork, local mushrooms and blue corn. But don’t expect to see the same ingredients year round. “We’re going back to what it was like 100 years ago,” said Campo’s chef, “when there wasn’t this global economy where you can go get berries in the middle of winter.” 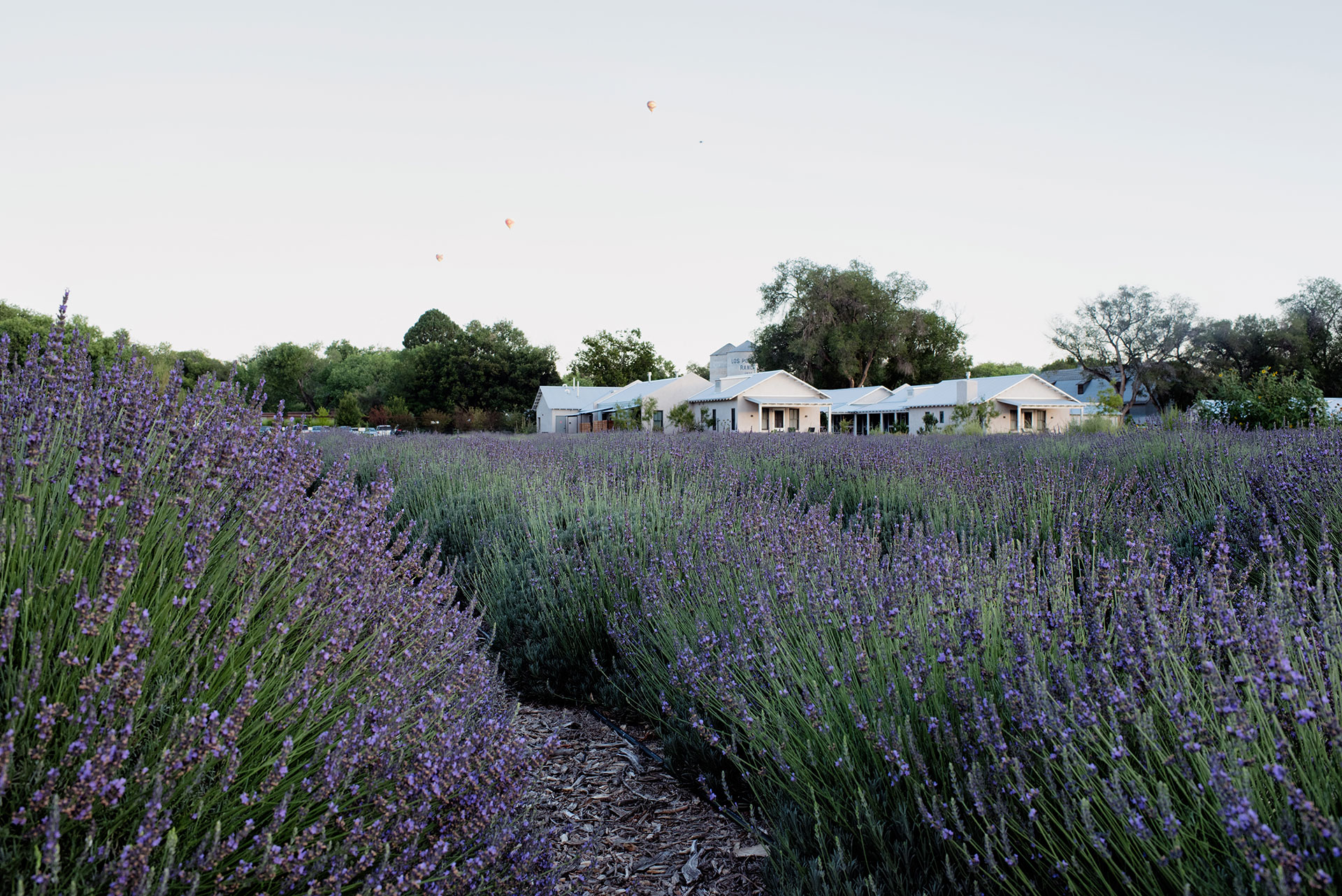 When you arrive at Los Poblanos in the summer, it’s the lavender that you’ll first notice. 25 acres of purple scent drifting under distant mountains. Distilled on site, it is the secret ingredient in the bath products, as well as in the sustainable ambitions of this organic farm hotel. Hundreds of years ago, this was already farmland. When the ranch’s latest stewards took over, they prioritized lavender — which grows well in the arid climate and uses a fraction of the water than the typical crop, cattle-fueling alfalfa.

But that’s not to denigrate the historic owners. In the 1930s, the only two single people in the House of Representatives fell in love and made this place their empire — and alfalfa, beets, and cattle their subjects. Then, Albert and Ruth Simms turned the old ranch into an architectural pilgrimage site.

They hired a titan of Southwestern architecture, John Gaw Meem. His two buildings at Los Poblanos — the Hacienda and La Quinta (now spa and community gathering place, respectively) — remain among the best examples of his Territorial Revival style. A uniquely New Mexican art form, Territorial Revival blends Greek Revival pediment windows and doors and broader European influences with the tan, mud-colored stucco finishes and white plaster walls of indigenous and Spanish styles. It is an “amalgam of all these cultures coming together in one place,” as Matt Rembe, executive director of Los Poblanos, describes the style. He would know — he grew up in the Hacienda with his family. The Rembes bought half the ranch from the Simms as a family home, before purchasing the rest to save it from development years later. Rembe grew up playing among the original Spanish tile, towering carved doors, and kiva fireplaces that draw marveling guests today.

Other buildings on the ranch are no less storied (if significantly less glam). Rembe calls the old dairy structures from the 1930s “dumb U.S. Department of Agriculture buildings.” But they aren’t completely useless. When it comes to construction, there’s a trade-off between the energy that goes into creating modern, ultra-green buildings from scratch and reuse of what already exists. “Restoration and adaptive reuse of old buildings is probably the greenest thing you could do,” argues Rembe. The Los Poblanos restaurant, kitchen, bar, and shop make use of the utilitarian spaces. The rest still store hay and equipment. 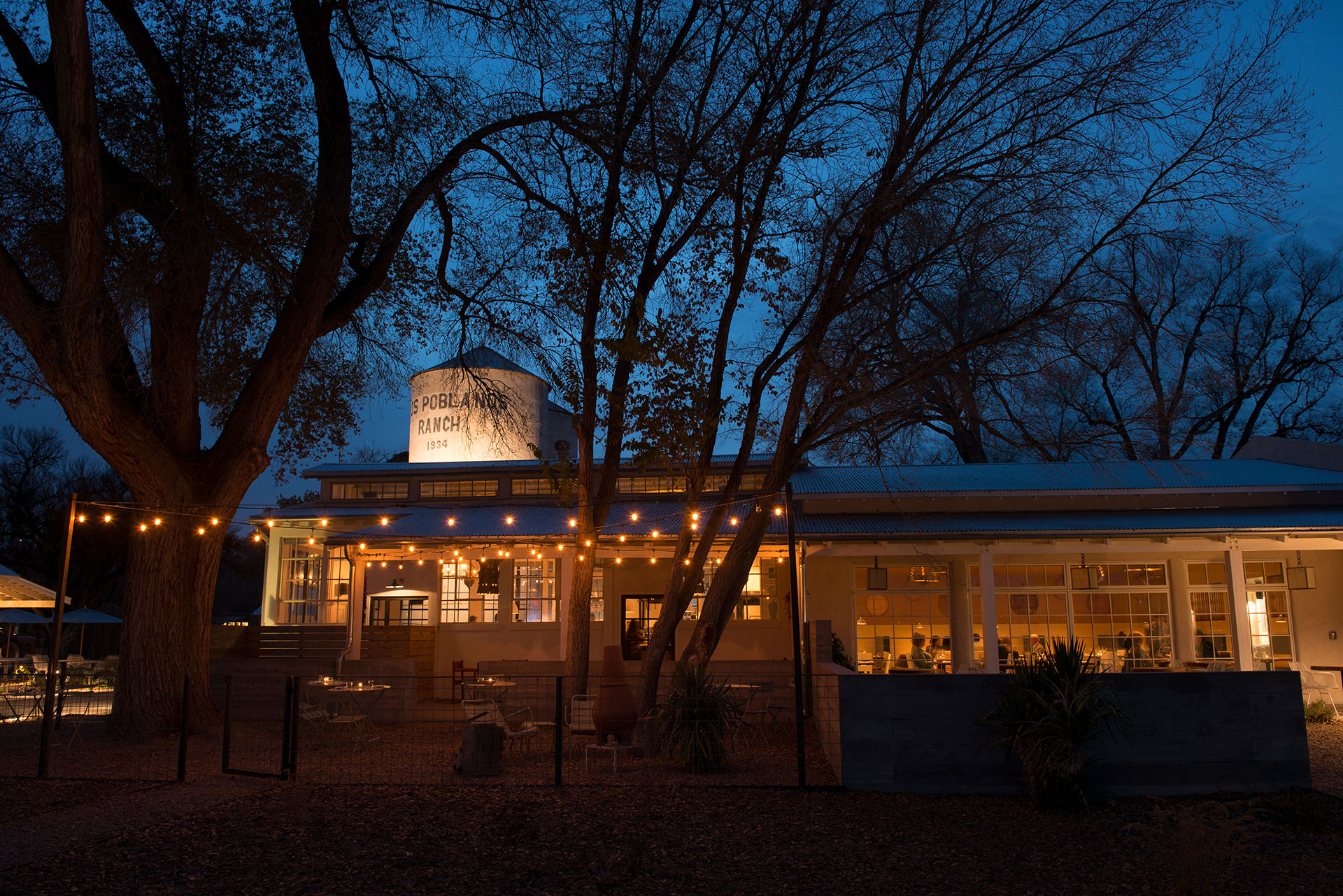 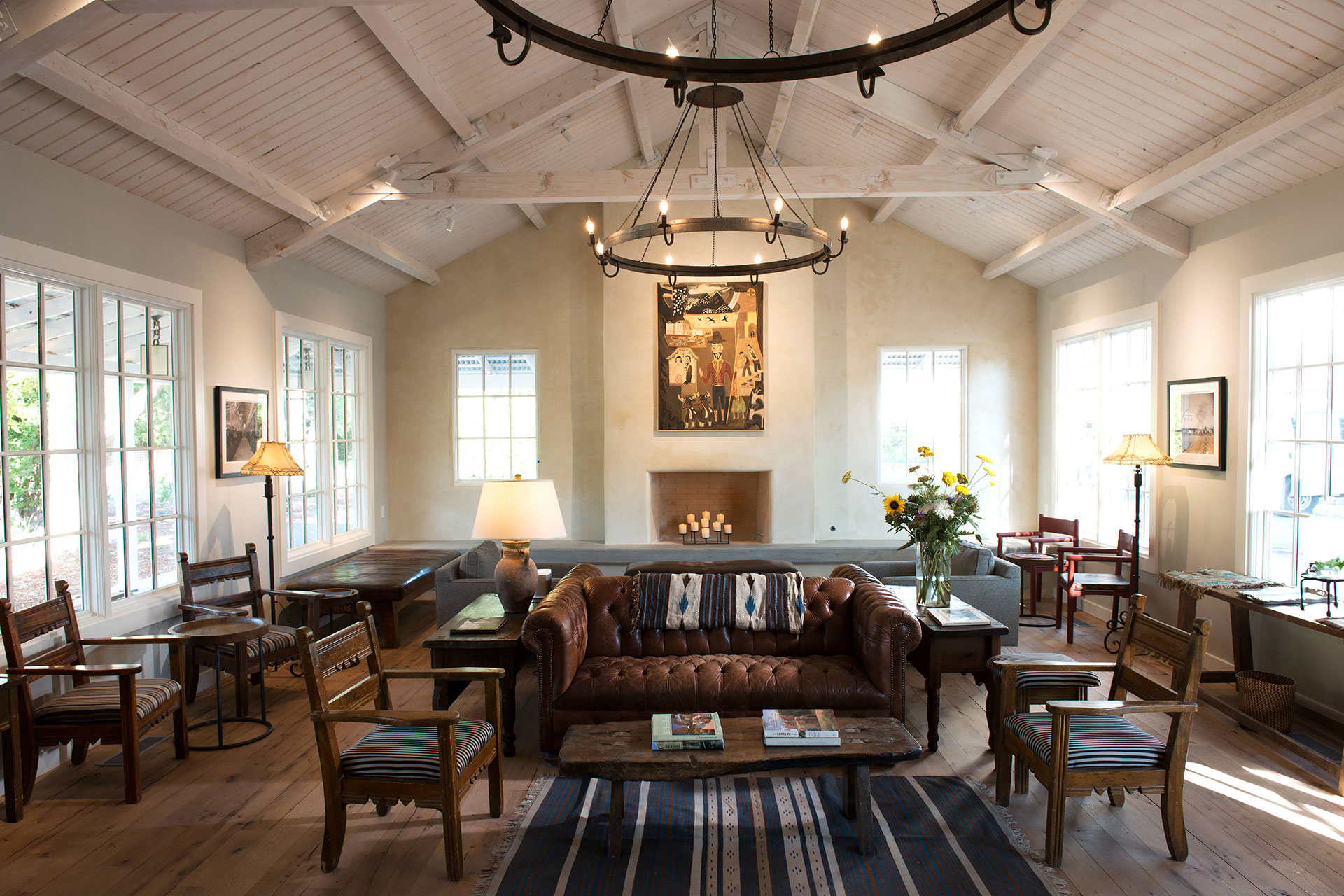 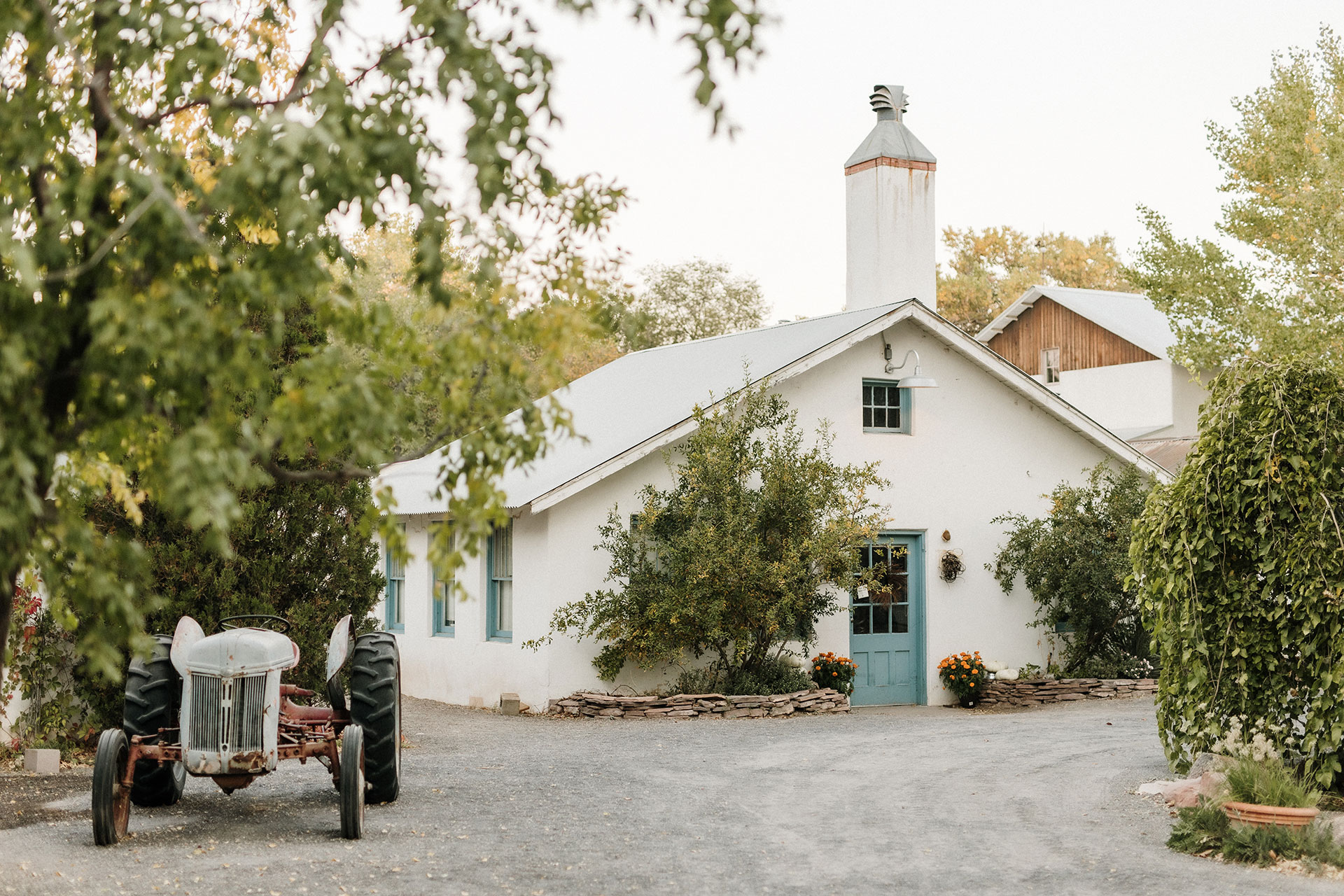 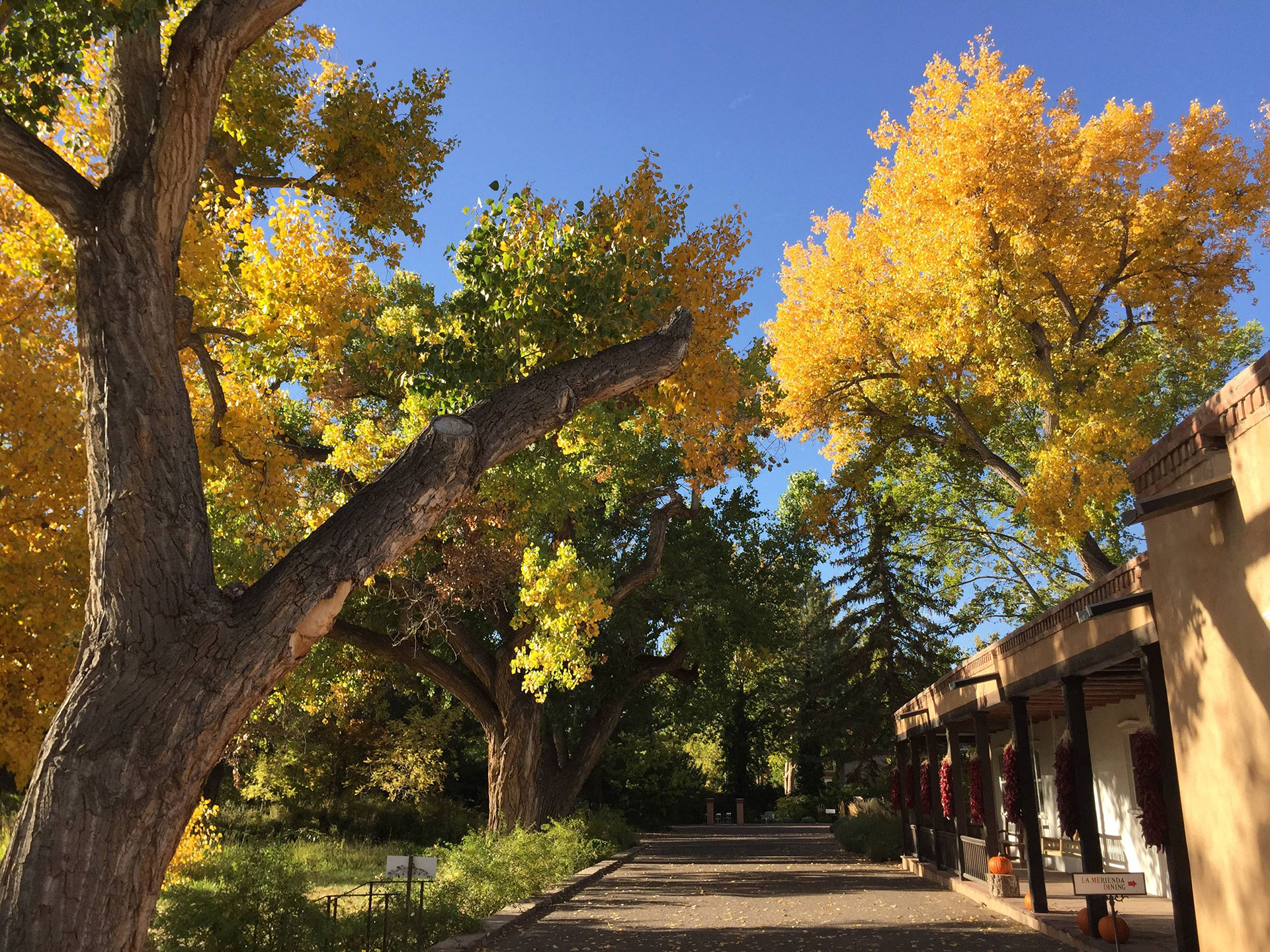 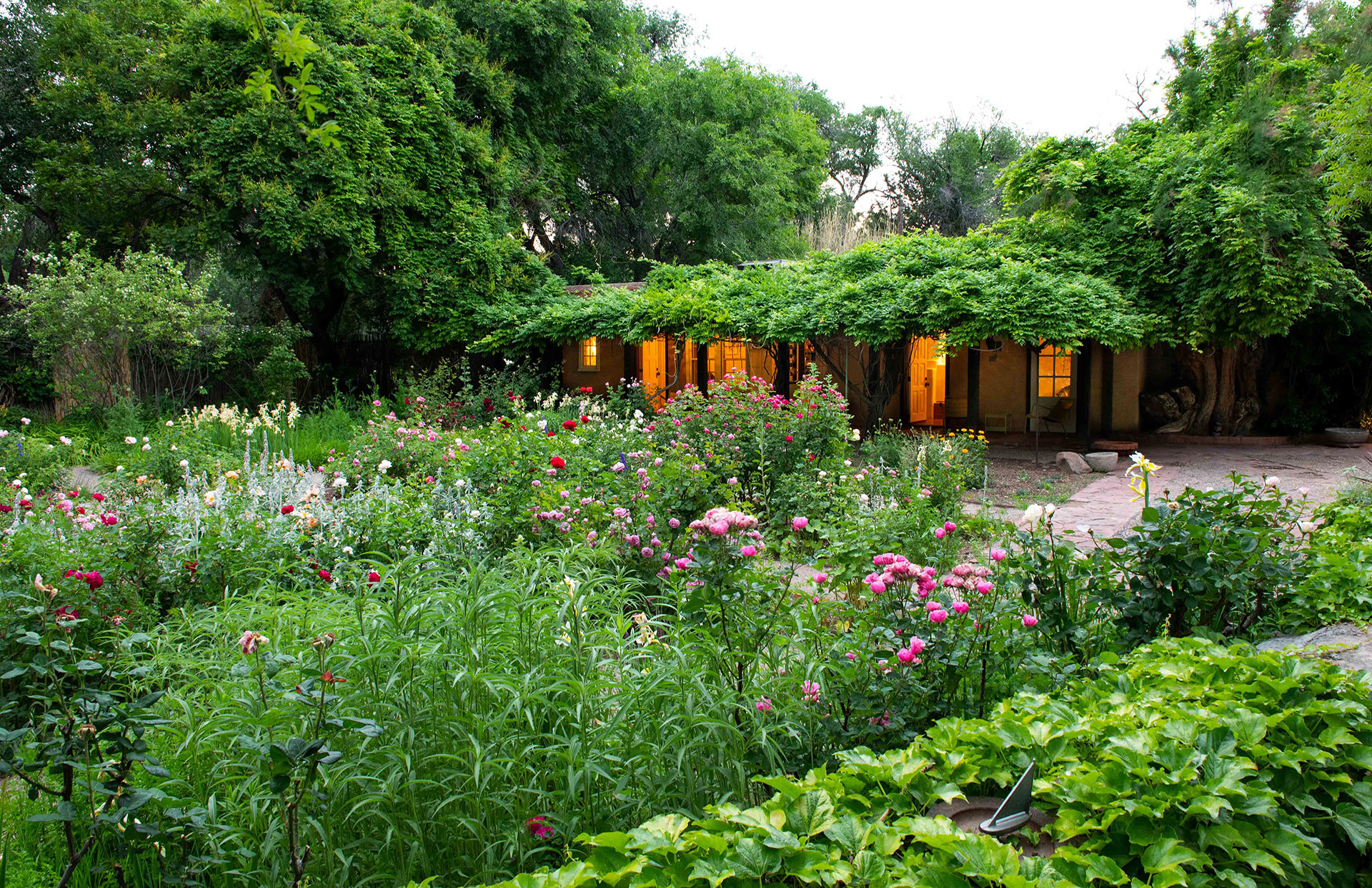 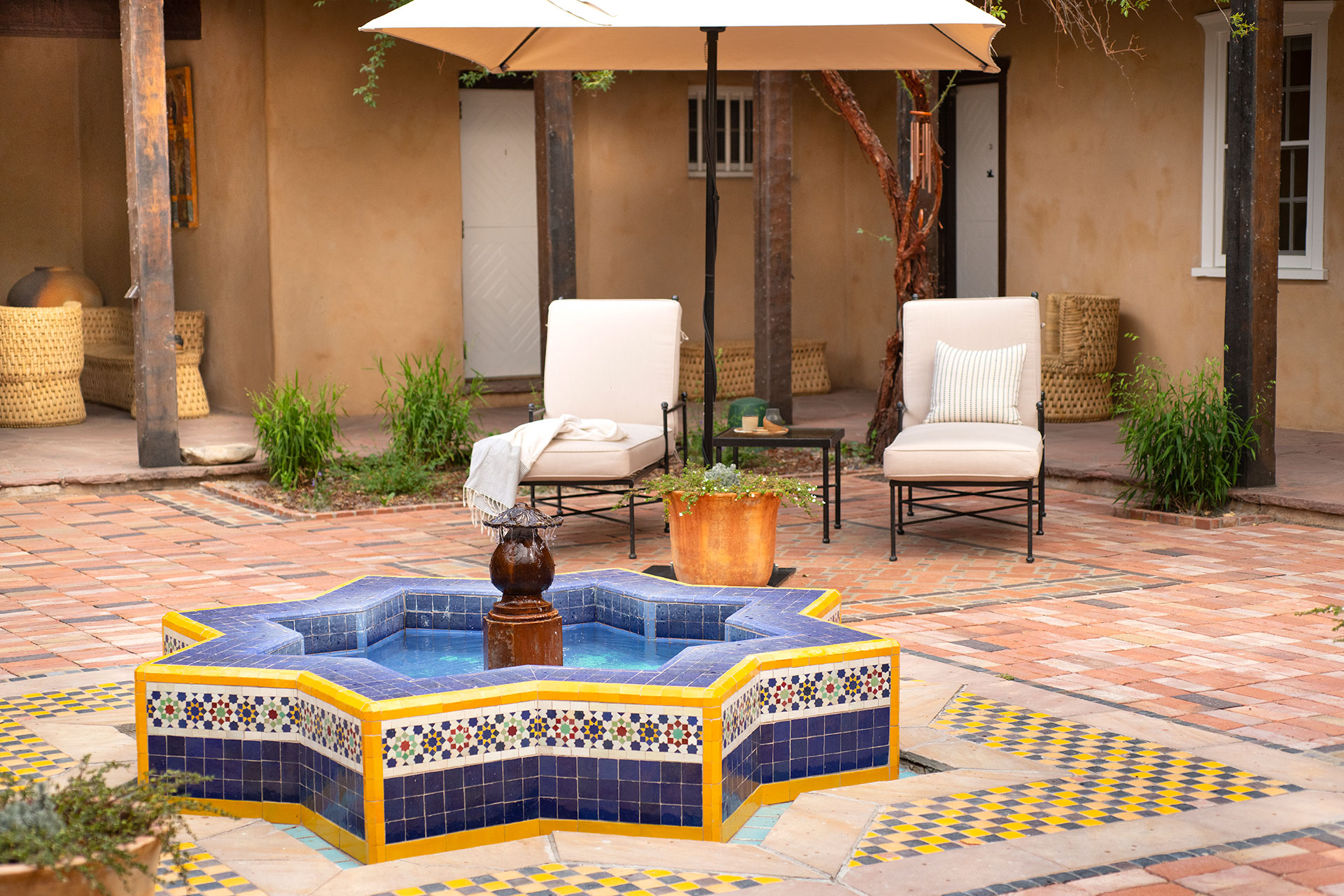 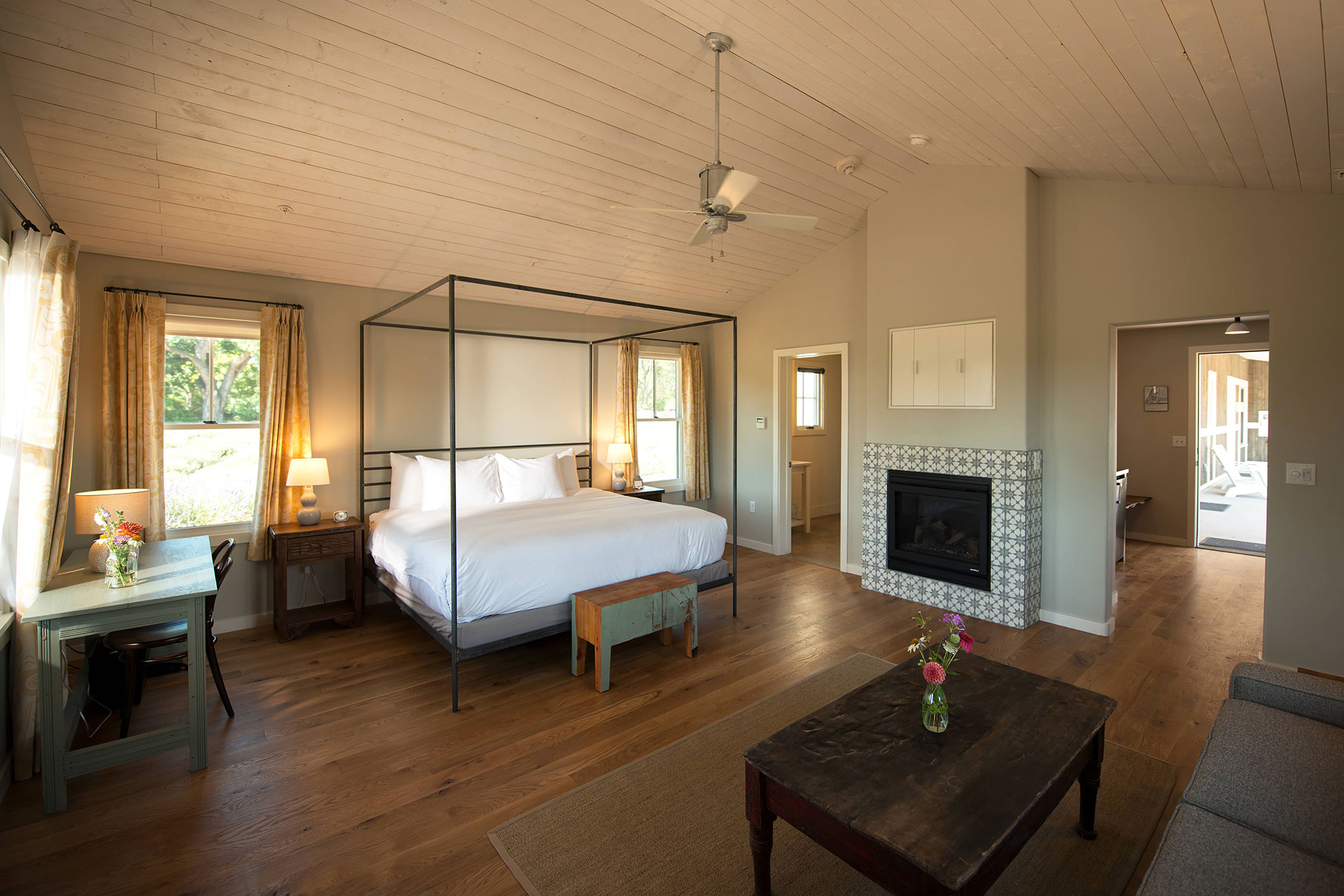 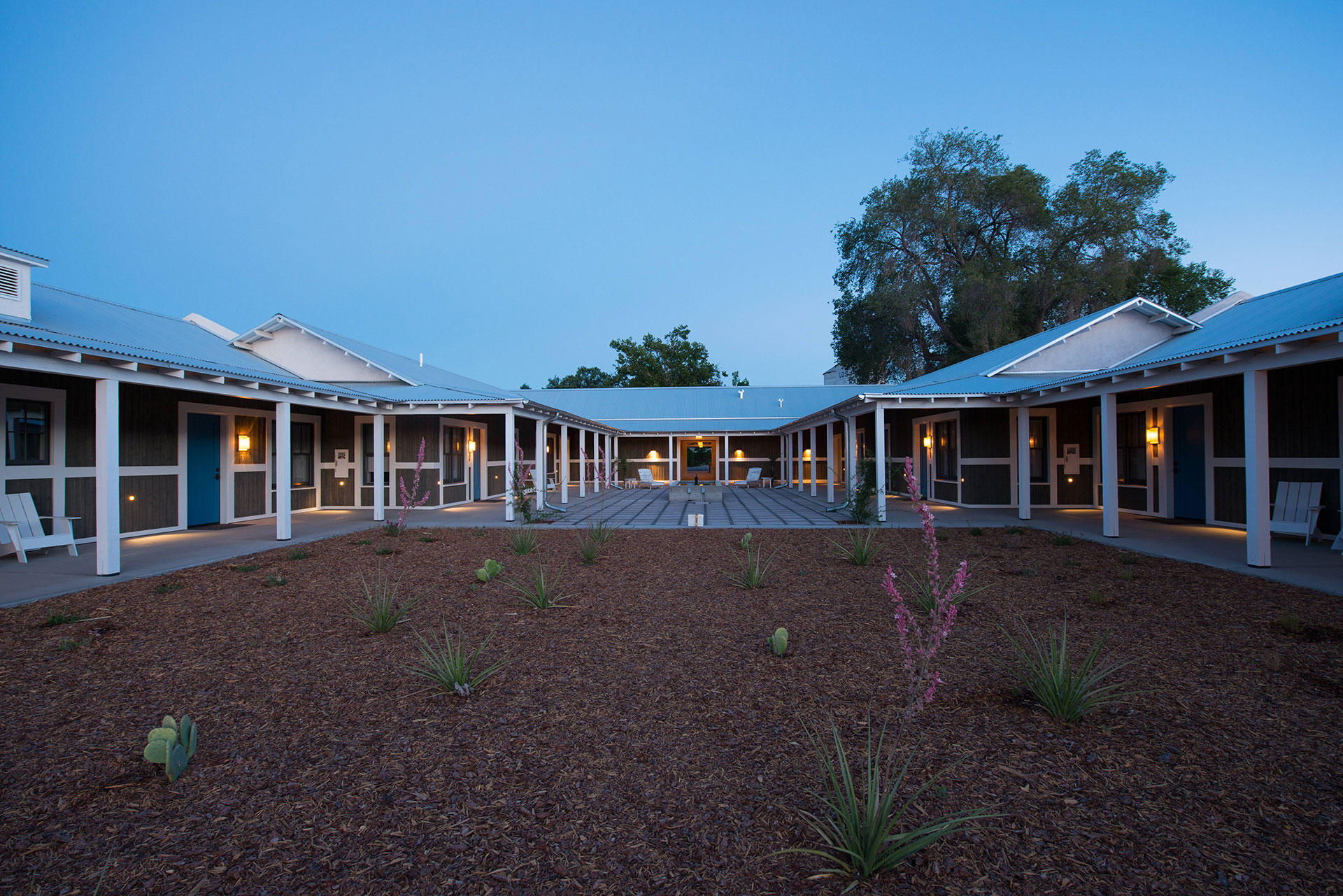 There’s no question that Los Poblanos is among the best hotels in the Southwest. Today, its 45 guest rooms take inspiration from both of the estate’s styles. The Meem Rooms and Suites mimic their namesake architecture, all tin light fixtures, hand-carved beams, and fireplaces, while the Field and Farm accommodations take inspiration from the 1930s dairy buildings, sporting original artwork and views of either the gardens, acequias, lotus pond, or lavender fields and mountains.

Rembe notes that most who come for the food or the architecture end up seduced by something as simple as the community around the ranch. Los Poblanos farmers, chefs, distillers, cheese mongers — they’re all there, all friendly and welcoming, all laughing over the property’s cat, Mouse, who sneaks into guest rooms where he’s not allowed, or the chattering peacocks and guinea hens that have prompted complimentary bedside earplugs.

But at Los Poblanos, it’s inevitable that conversation circles back to your plate. “Not everyone can afford sustainably grown food,” admits Rembe. “We can’t grow enough here to support the broader community.” But what they can do is “grow in a way to educate people who are coming here to understand where they should be buying their food, why it’s important, and how it tastes better.” It’s a reverence for the setting that can’t help but inspire, both at the hotel and in the larger ABQ community. And as the hospitality world continues to prioritize the locations that host them, perhaps that’s the most important way for hotels to contribute.

“You’re eating and sleeping on the property where the ingredients were grown,” says Rembe. “It’s a very profound experience. It’s so immediate.” 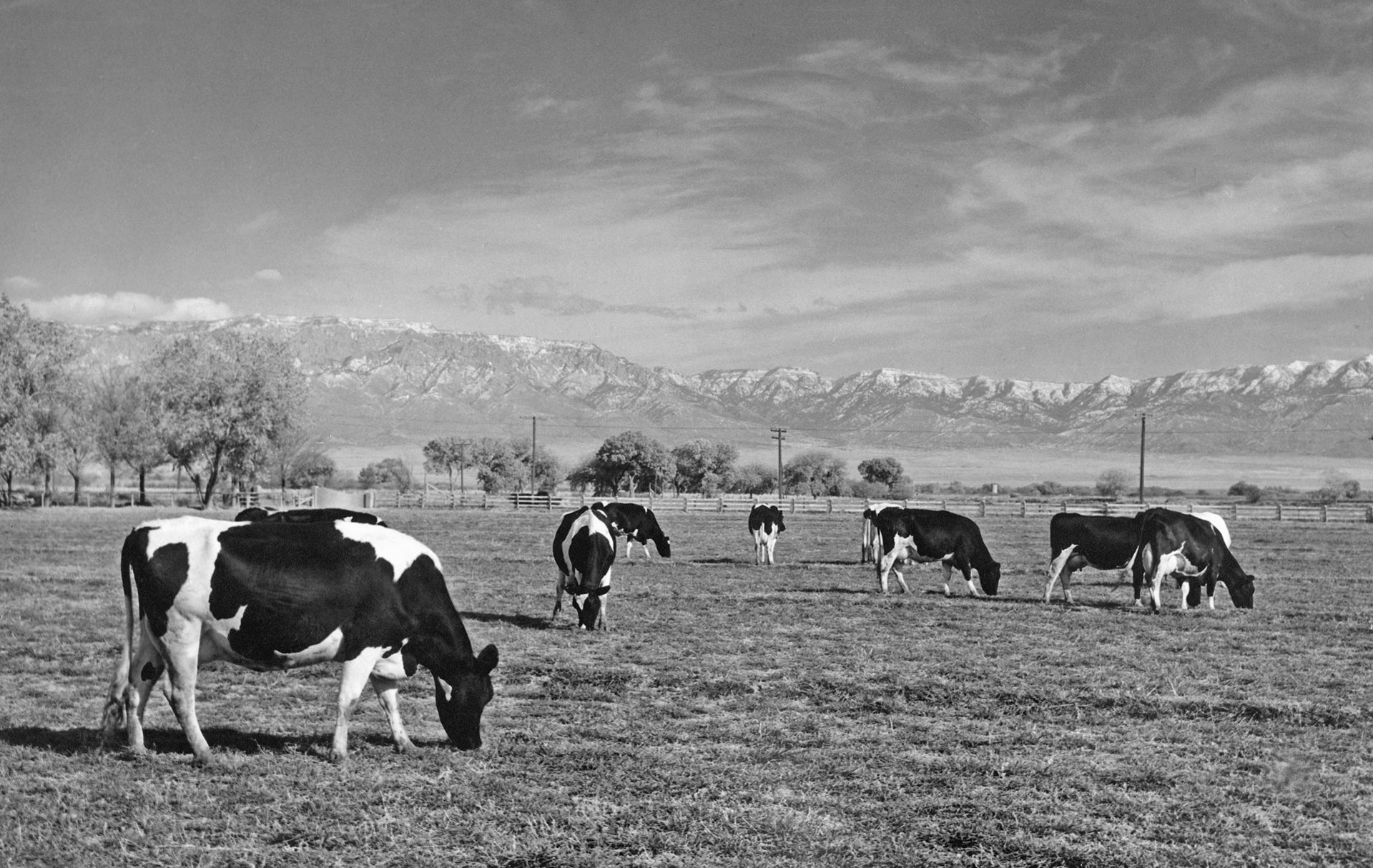