Nestled in Oaxaca’s history-soaked Valley of Xaaga, El Silencio is a lauded mezcal maker that believed it was time their product ascended to the natural next plane. Wineries have hotels on the vineyards — why not mezcal?

In France, the word maison means, literally, house. But it can also describe a company, frequently a family business, that prides itself on uncommonly high levels of craft. The house — in fashion, in furniture, in wine — is known for meticulous attention to detail, for putting the utmost care into servicing its clients, and often for creating a warm, welcoming, homemade atmosphere. Casa Silencio has adopted this approach and applied it to a product — mezcal — and to a place: Oaxaca.

The original wines came from the country of Georgia, but to most of us that’s irrelevant. Mezcal is different, still heavily associated with its birthplace of Oaxaca, Mexico. With the opening of Casa Silencio, this iconic region has more than just the first vineyard-style hotel for mezcal. It has a boutique hotel that hopes to embody everything special about the place and its most famous product.

“We don’t just sell mezcal,” Fausto Zapata, co-founder of El Silencio, told the New York Times as his new venture made headlines. “We sell Oaxaca in a bottle.” 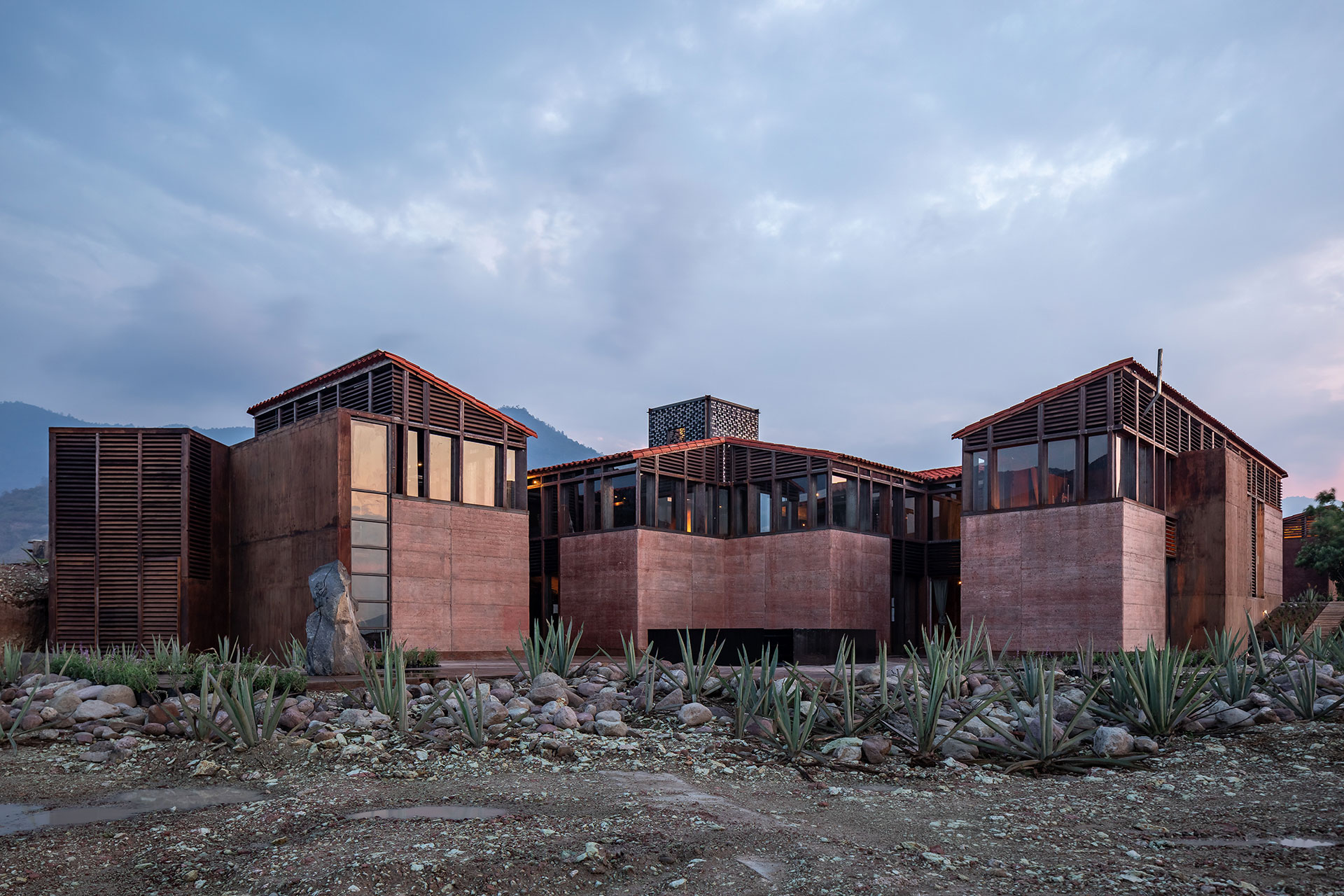 Descend towards the property from the main road and you take in a shot of Oaxaca that is a ways bigger than that bottle. “As if veiled by mystery, the magnificence of Casa Silencio is evident from the moment the property comes into view,” co-founder Vicente Cisneros tells Tablet, and in his word choice you can feel his love of the place. “The panoramic perspective of the property offers sweeping views of the surrounding mountains and agave-studded valleys. The landscaping is extensive, yet understated, and at night an infinite canopy of desert stars creates a natural backdrop evocative of the ancestral spirit of the region.”

Cisneros’ focus on mysticism is not incidental. “Tradition and mysticism, particularly that which is associated with the mezcal creation process, is integral to the fabric of Oaxacan culture,” he insists. Mezcal is the “elixir of the gods,” and one myth says the first drink was poured when an agave plant was struck by lightning.

The hotel is meant to play off that mysticism, its art pieces by Oaxcan artists like Eber Chávez, Cadáver, and Moisés Álvarez Jiménez an exploration of a mythical aesthetic defined by texture and shades of black. But synchronicity with the region really begins with construction. “Had we created a modern building that felt out of place, the people in the surrounding city would have felt invaded,” stresses Cisneros. “Casa Silencio was designed to intentionally and seamlessly blend into the area’s mountainous backdrop.” Modern, almost brutalist buildings rise out of the earth in muted tones, with a shuttering that adds modern flair to walls built with rammed earth from the local soil. Fitting for the local concept, the rammed earth technique — known as tapial — is the same you’ll see if you venture out to any of the pre-Columbian archaeological sites in the area. 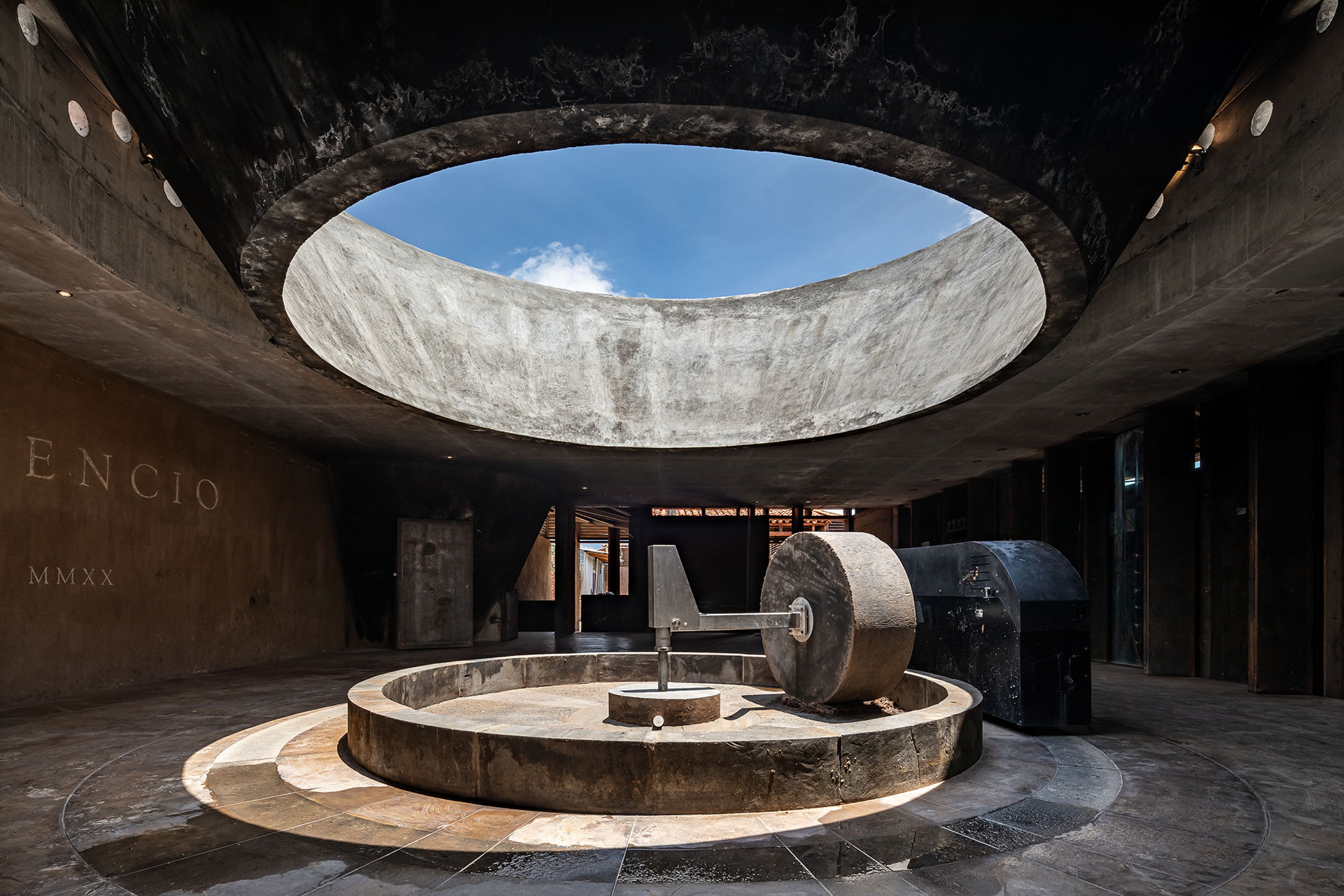 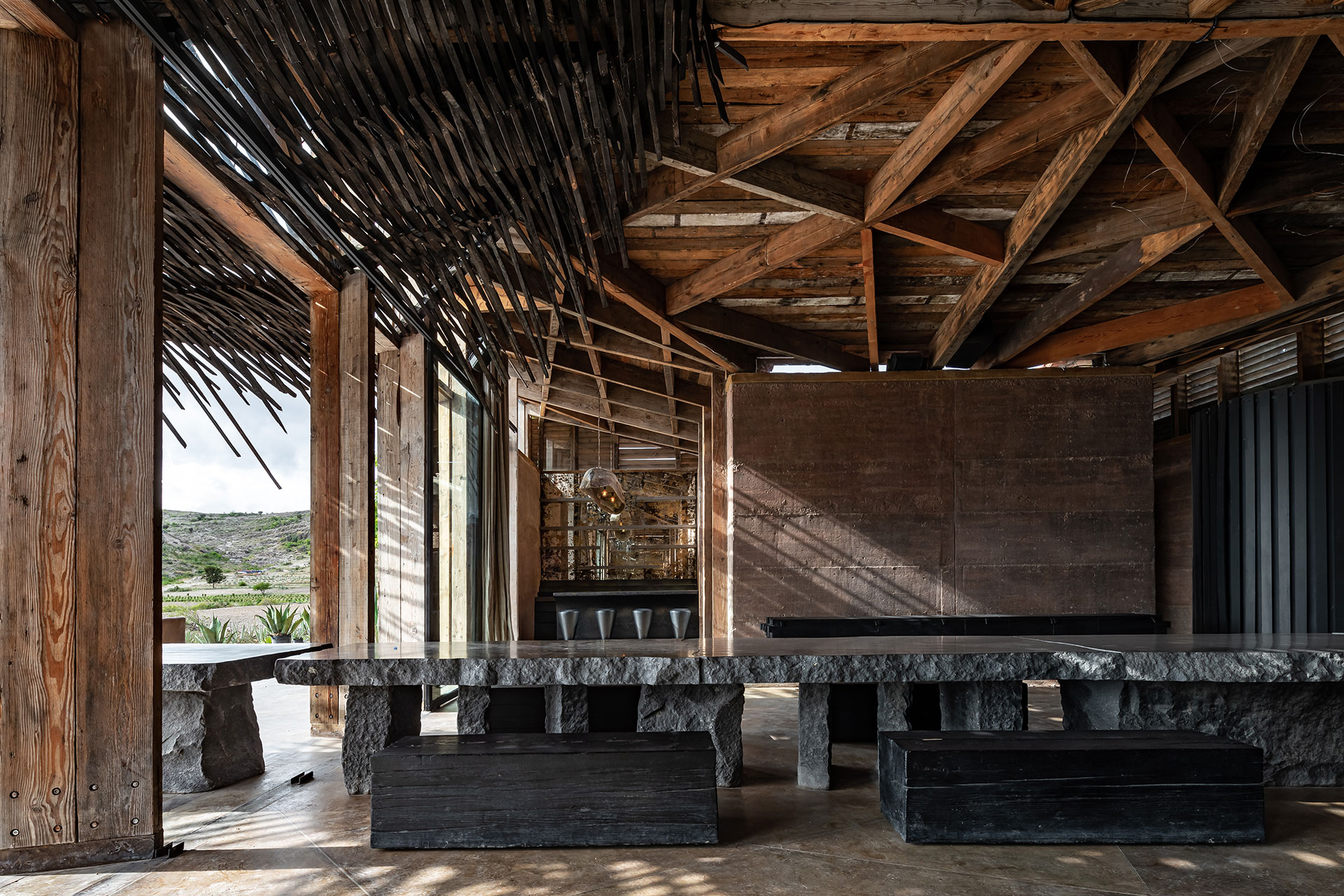 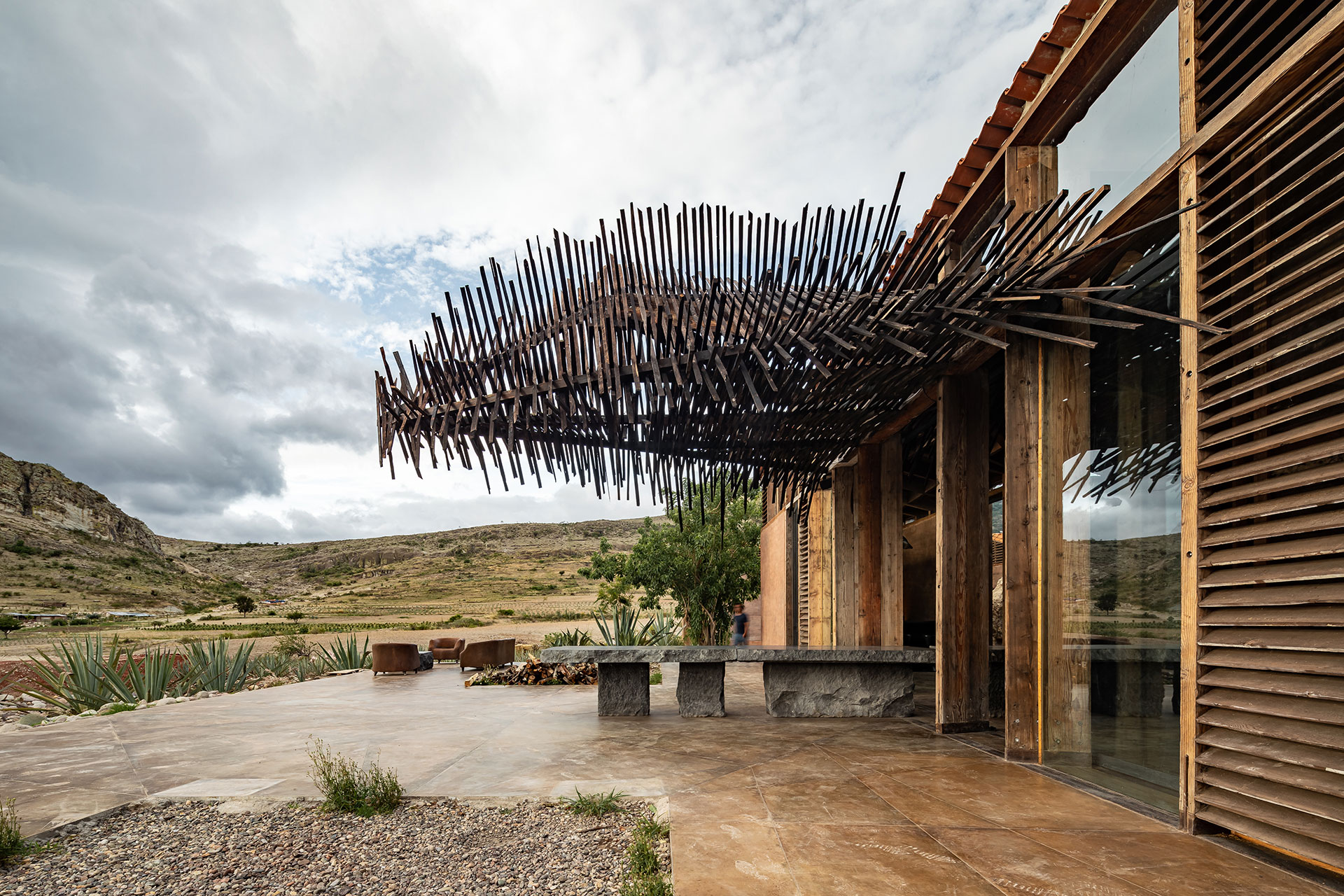 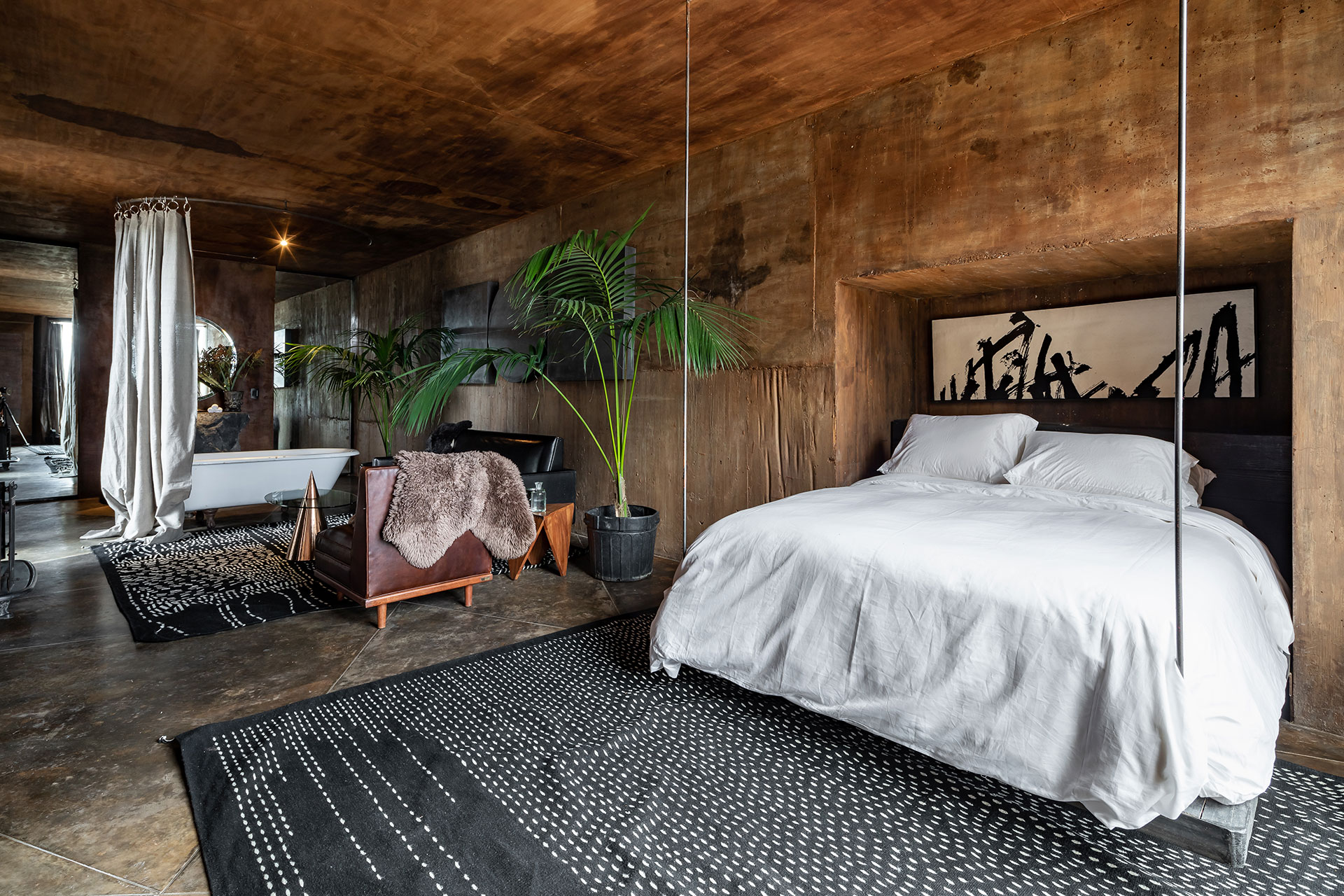 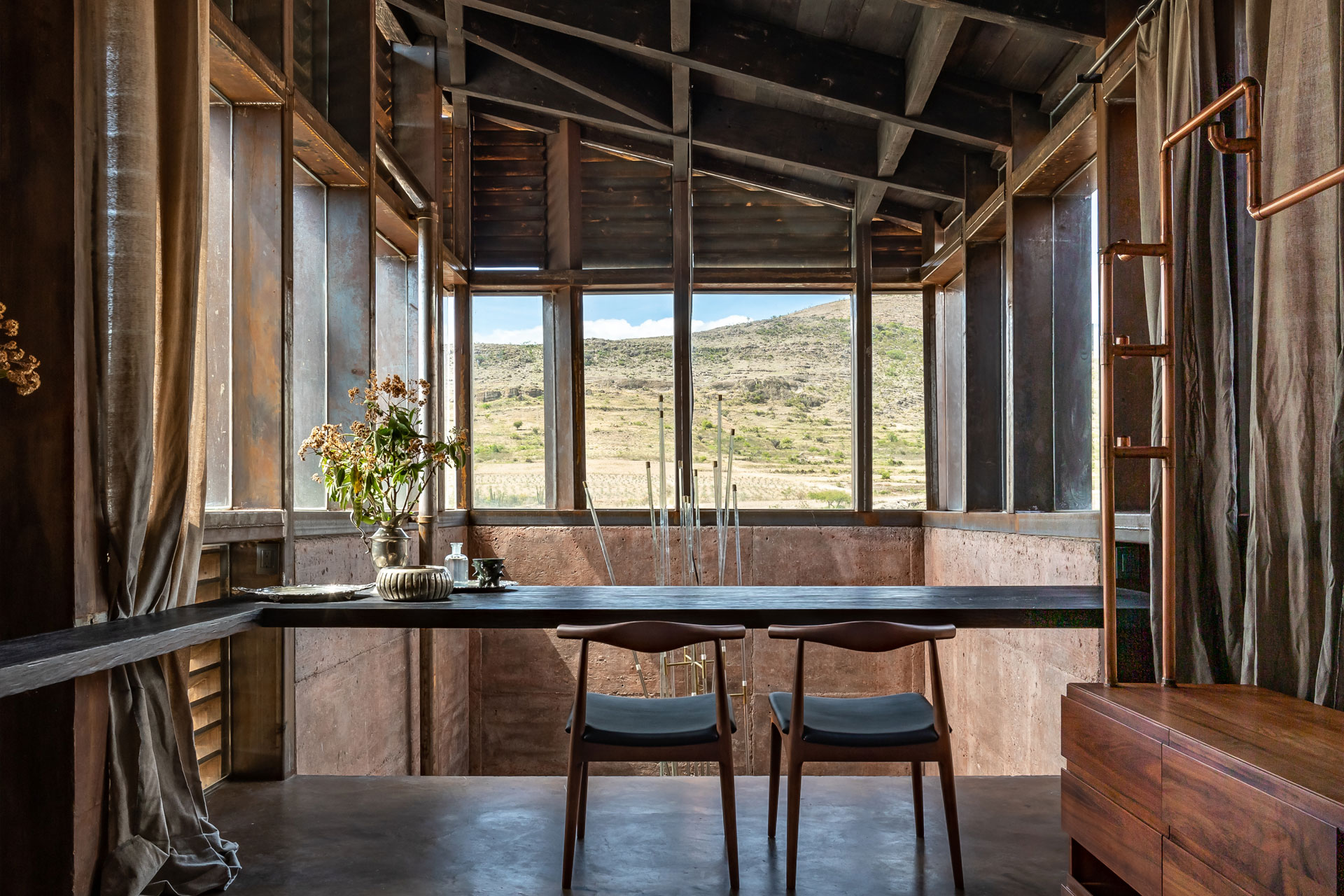 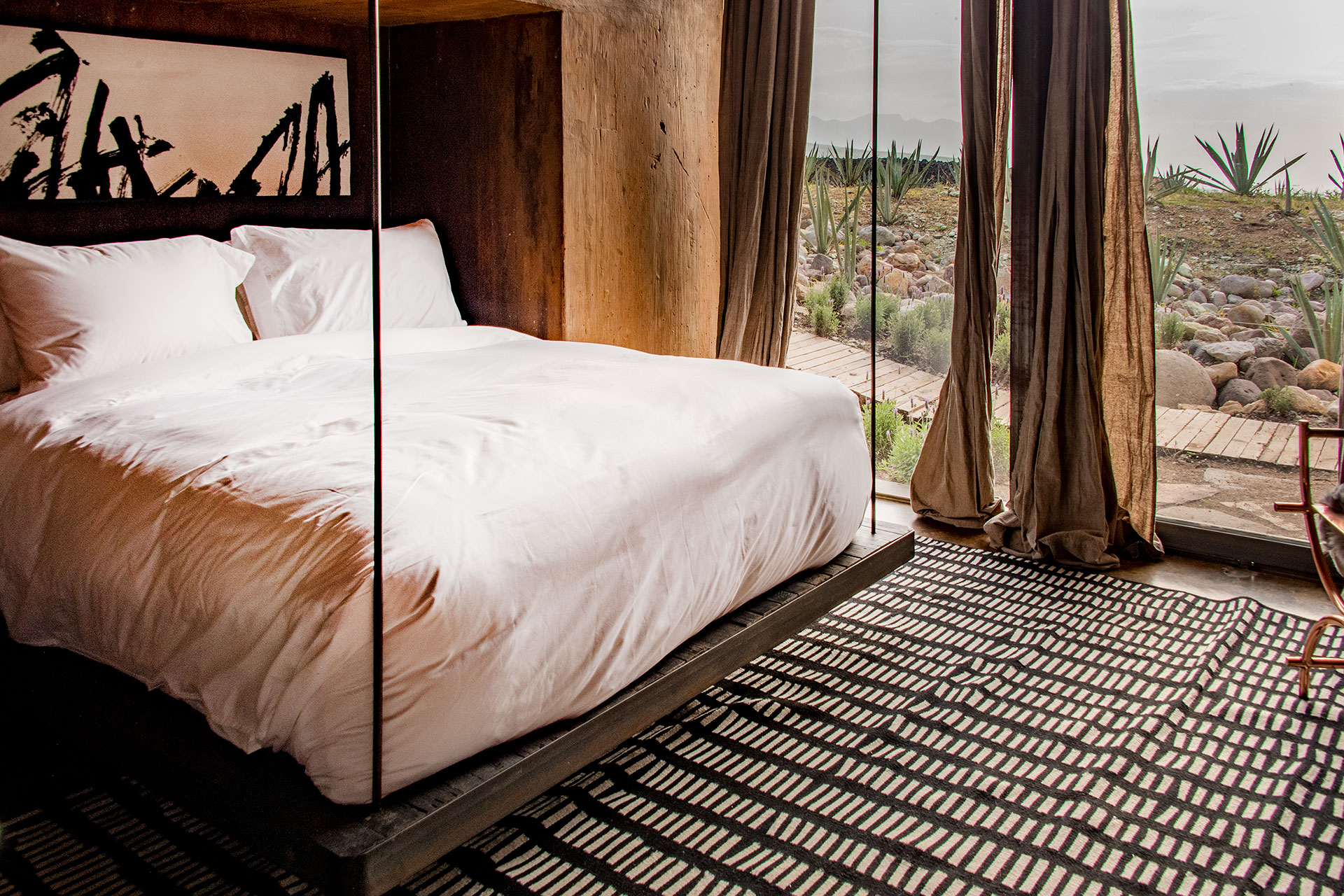 Only six suites intrude upon the sprawling 16-acre property that was already home to El Silencio’s distillery, its tireless churning tahona forming the backbone of the new resort in both concept and reality. A traditional device but uniquely solar-powered, it’s a thousand-pound wheel that grinds agave in plain sight under an open-air roof. Guests, if they like, chop and toss the raw plant in the ovens, then head out to the indoor-outdoor dining space (helmed by Top Chef Mexico winner Rodolfo Castellanos) to watch the rest of the process and taste its spoils.

Inside, the suites at Casa Silencio vary in size — some span multiple floors, some show off living rooms and fireplaces. Rooms, hallways, and bathrooms feature furnishings made from repurposed wood by local craftsmen, while linen curtains were made with traditional pedal looms. Rugs were handwoven in the Oaxacan town Teotitlán del Valle.

The rapid rise of mezcal has led to many an interloper arriving in Oaxaca and attempting to bottle liquid gold. But even in the New York Times piece, skeptical of the trend, El Silencio’s approach is underlined as a sustainable alternative. Quoting an Oaxaca native who scouts dozens of mezcals to stock her L.A. restaurant, they wrote: “Ms. Lopez cringes at hobbyists or investors who talk about ‘discovering’ the spirit. She said she liked the way El Silencio, owned by two Mexican citizens, was growing: sustainably and in a way that aimed to create wealth for the region.”

For El Silencio, mezcal is not a trend. “A well known saying in Oaxaca is ‘para todo mal, mezcal, y para todo bien, tambien,’” says Cisneros. “It means, ‘for everything bad — mezcal. For everything good too.’” 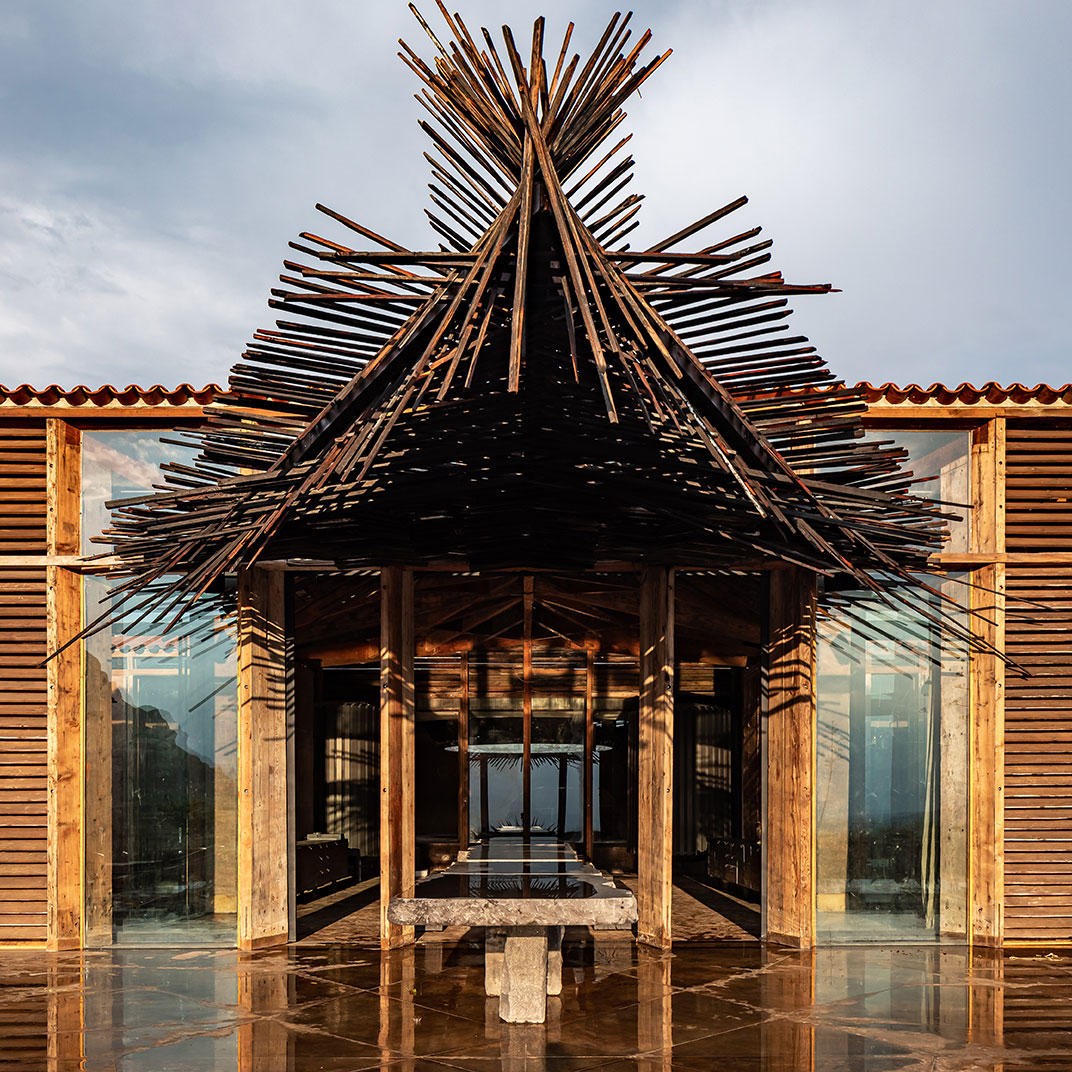 Tablet is your source for discovering the world’s most exciting hotels — places where you’ll get a memorable experience, regardless of price. We’re the hotel experts at the MICHELIN Guide, and we’re the best way to book hotels online.

Book your next hotel on Tablet, the official hotel selection of the MICHELIN Guide.