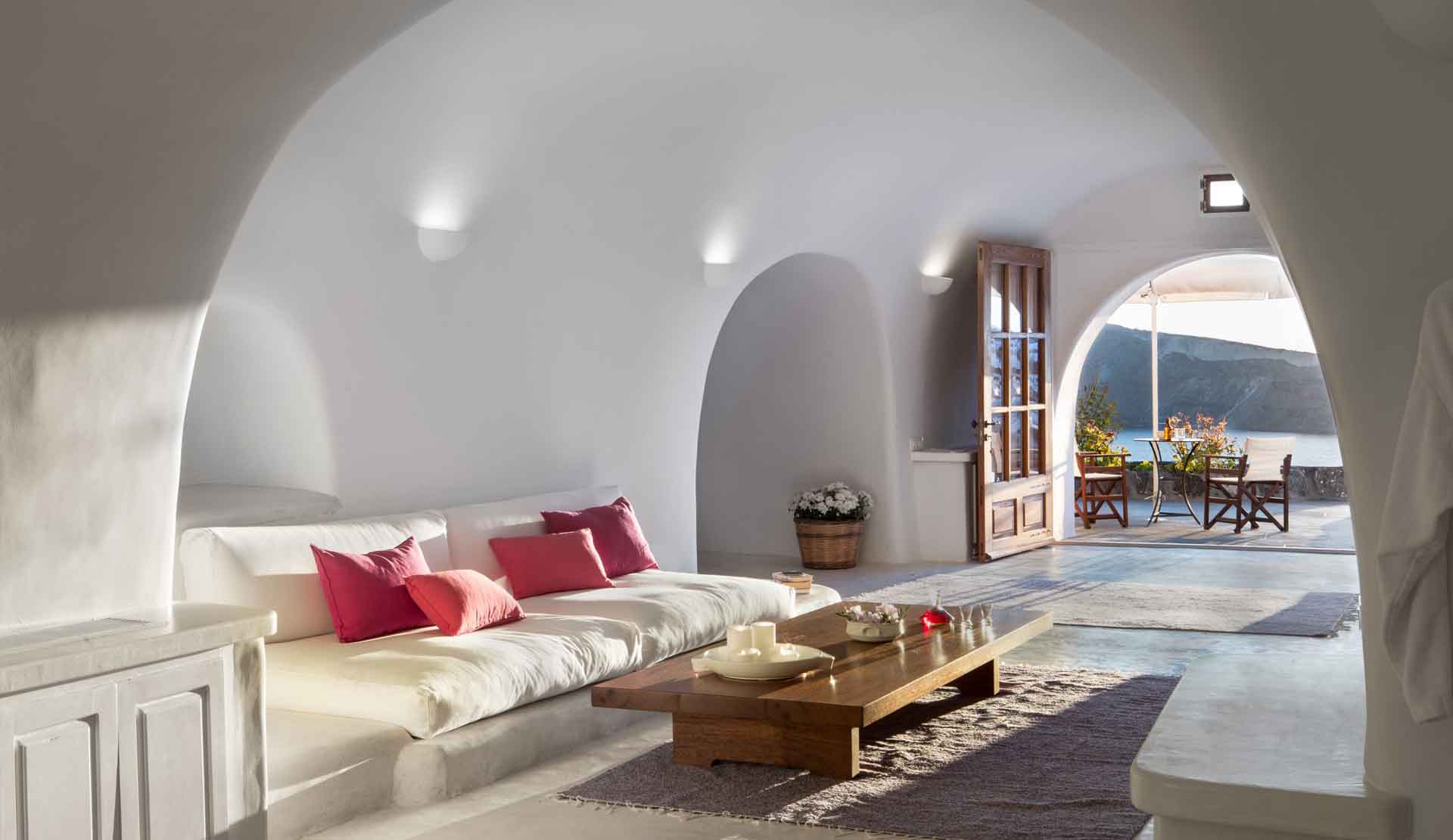 Many moons ago, a volcanic eruption ripped Santorini apart. The caldera it left behind filled with Aegean blue. Thought to be an inspiration for the legend of Atlantis, the majestic island is iconic, and Perivolas is perhaps its most iconic hotel.

The caves that make up Perivolas Lifestyle Houses are 300 years old. They’re the former homes of the farmers and fishermen that lived and worked in Santorini long before it became one of the world’s most desirable destinations. Unlike the cave accommodations of Cappadocia, where much of the character comes from exposed rock walls, here it’s a white stucco that covers the interiors — a whitewash that helps prevent bacteria and that has become a hallmark of the local style.

Of course, history is complicated. The white interiors at Perivolas take inspiration from the past, but their extension to the outside — and Santorini’s trademark of bright white structures against turquoise-blue water — is a more modern invention. “Originally the houses weren’t white,” notes Vanda Cordeiro, who’s been at the hotel for over a decade. “There were too many pirates” for that kind of exterior flair. 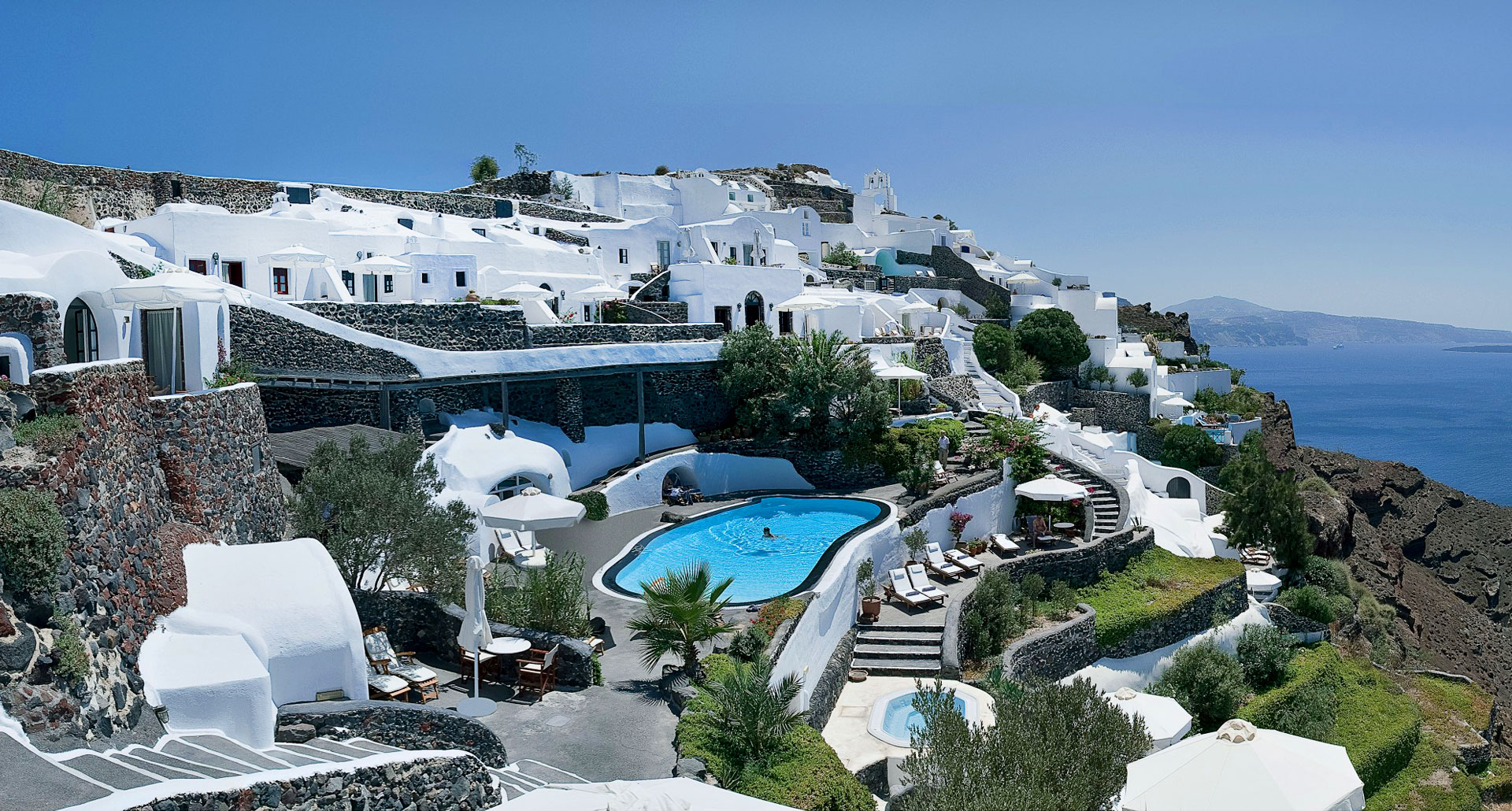 The rooms at Perivolas are an arresting sight: spare and white, flaked with the occasional pink, blue, or purple throw pillow or bedspread. Modernized and filled with luxe amenities, they nonetheless remain true to the traditional architecture and in harmony with the environment. The way the cliffside itself protects from the elements. The smooth archways formed in the excavation process. Even the simple fact that the rooms cluster together and face the caldera. For all of that you can thank the original designers, who relied on one another for protection and community among harsh summers and cold winters.

Still, it’s hard to overstate how far Perivolas has come since the Psychas family acquired the humble property in 1969. They opened the hotel in 1983, when Santorini was still a quiet place. By 2018, a busy day on the island drew some 10,000 tourists to view its unrivaled sunsets and climb its cliffs on the backs of donkeys. As Santorini grew in stature, so did Perviolas. Still family-owned and soon to enter a third generation, they’ve expanded with the years into a hotel oasis, a large and tranquil plot of land striped with flower-dotted black stone paths, pleasantly removed from the busier town of Oia. 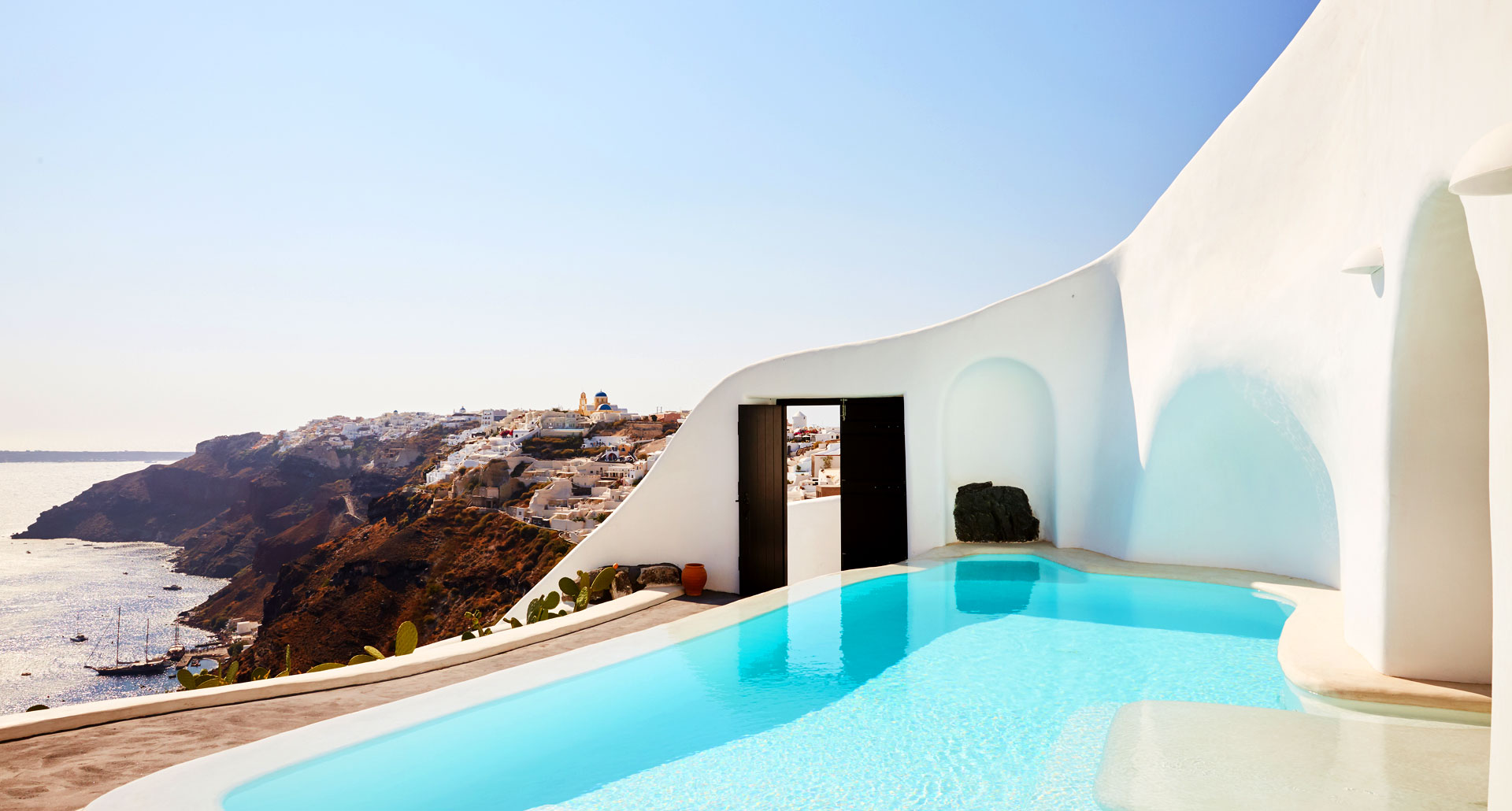 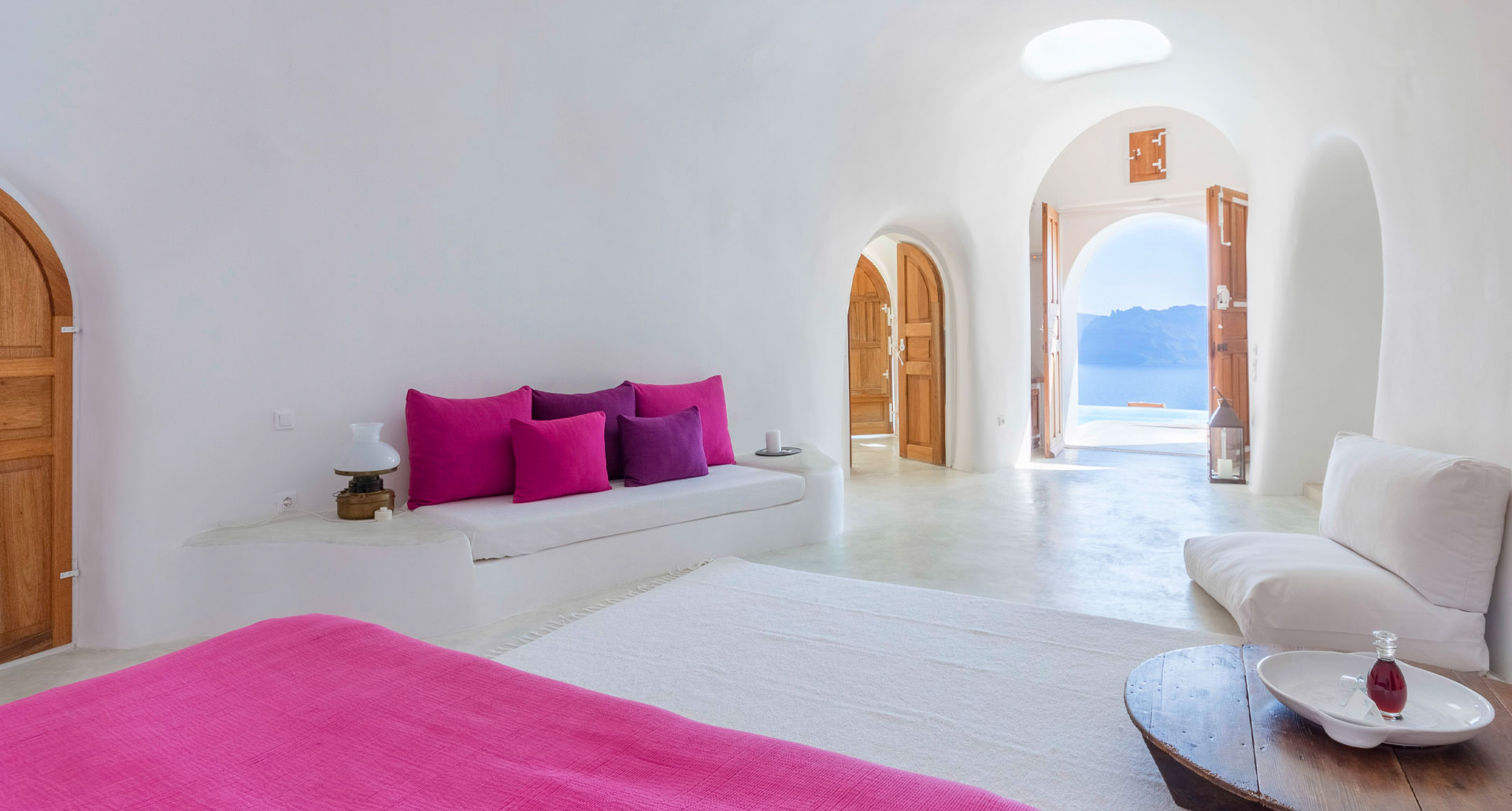 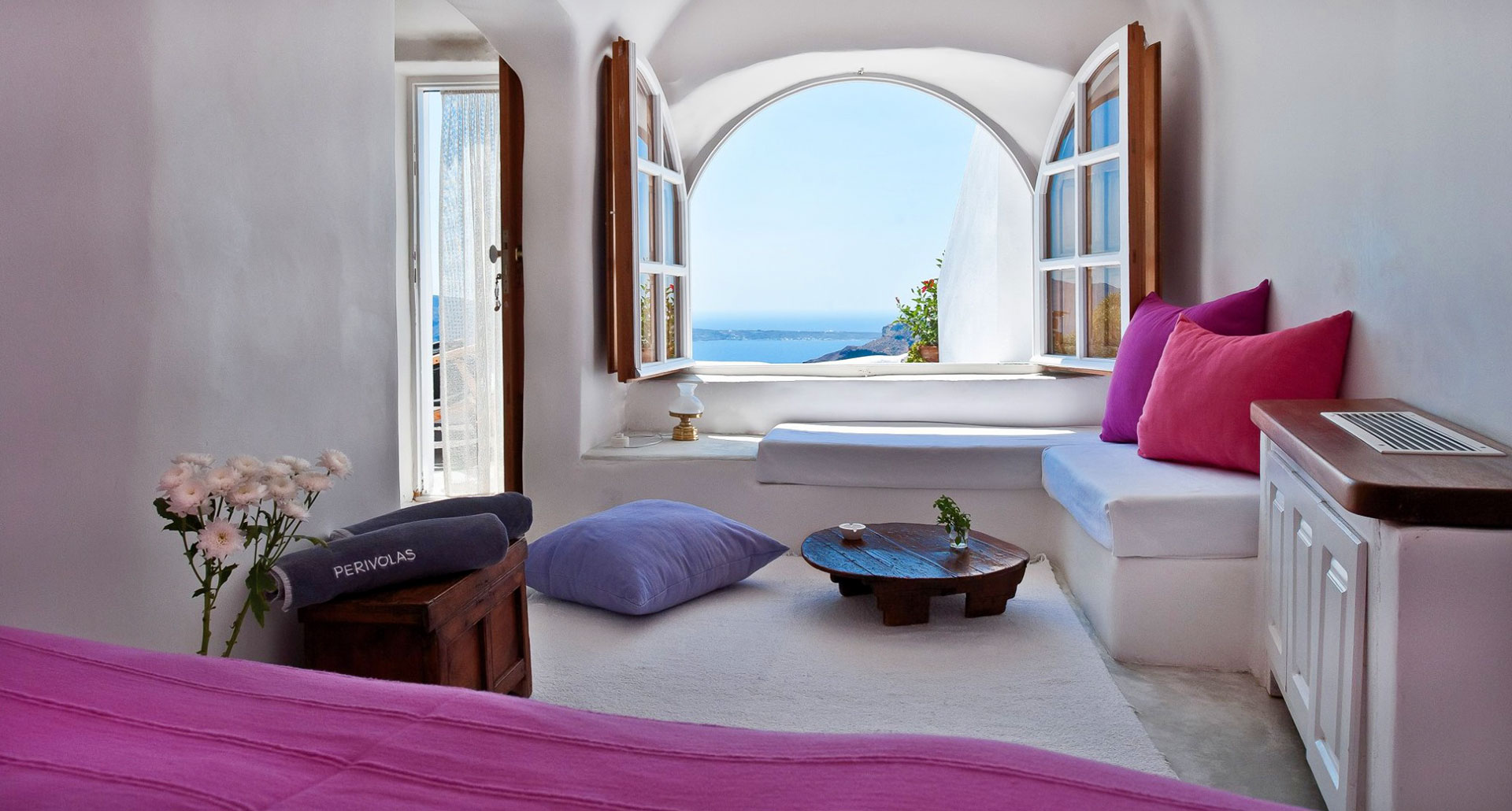 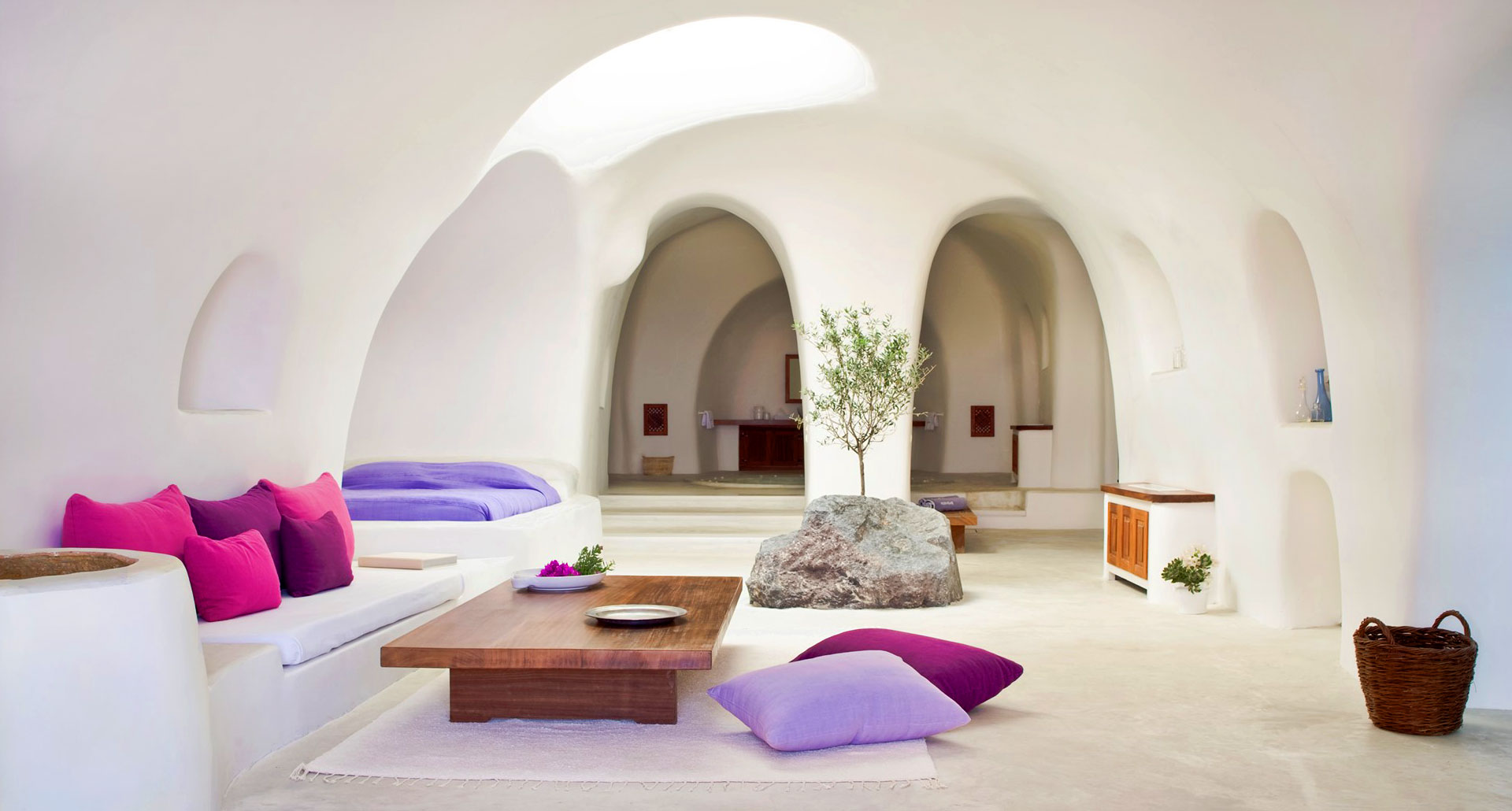 “It’s no-fuss luxury,” says Cordeiro, on the mission of the adults-only, honeymoon-friendly Perivolas. “That’s what we’re known for. People are supposed to enjoy the environment, to be with themselves, and in all essence, rest.” There are no televisions. At Perivolas, it’s about the surroundings, and, Corderio concedes, “I’m pretty certain that a lot of people have taken inspiration.” Reviews have been less humble. “The hotel that put Oia on the map and spawned countless imitators,” gushed one. “A complete original and unlike any of the [others],” went another.

Not all the rooms are caves, but even the overground buildings follow the style. And because many of these are heritage buildings, there’s no standardized room type in terms of size, shape, or decor. One room, a former stable, retains the remnants of a large, circular cutout in the roof, what used to be a hole for the animals’ minders to toss down feed. Studios are typically built into the cliffside, with a terrace looking out at the sea view, whereas the Perivolas Suite features its own private swimming pool, along with a spa area for steam baths and hydrotherapy. In between are the standard suites, superior suites, and deluxe suites, all with to-die-for views — some with private infinity pools. 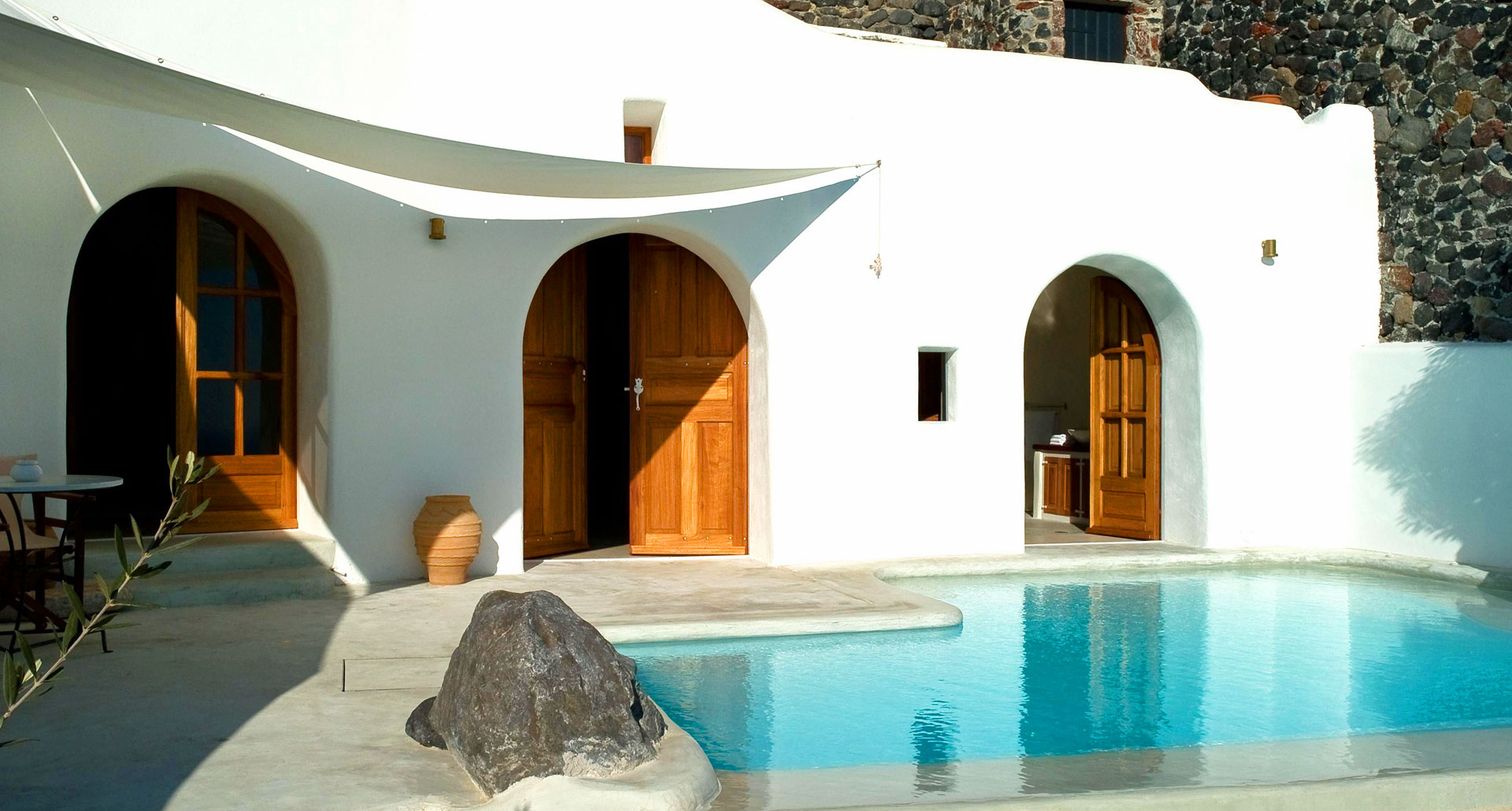 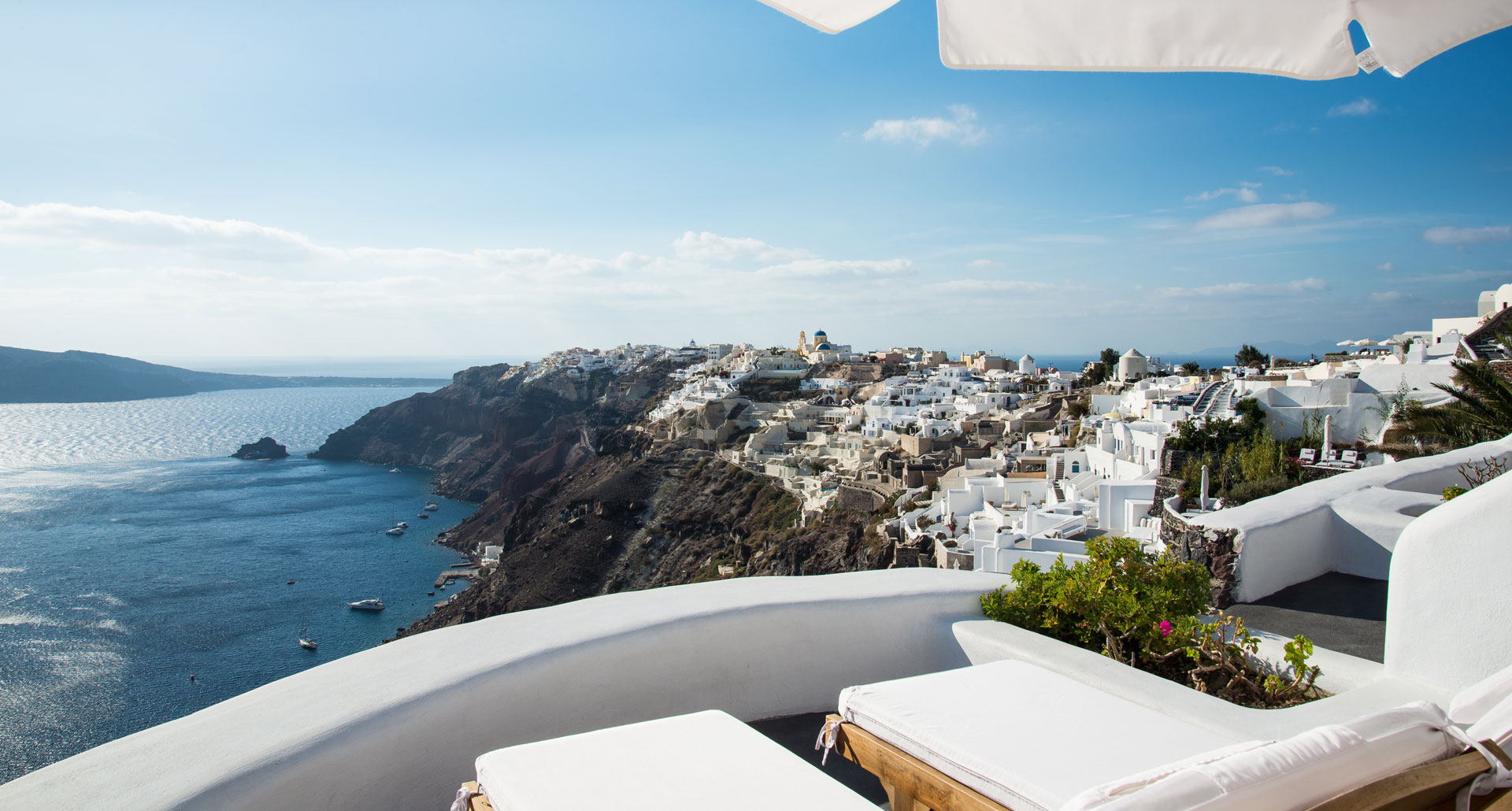 The restaurant serves Santorini’s famous water-starved, flavor-packed produce. There’s a spa on site, and the hotel has its own rigs for private boat trips over the blue to picturesque ports and coves. But you don’t really come to a place like Perivolas for excursions away, or for the spa. You come for the atmosphere and the inexhaustible beauty. And after a couple days of exploring, you might decide you’ve checked it all off your list. After a day or two of sightseeing, notes Cordeiro, many guests realize they’ve seen everything and they want to, simply, “appreciate the hominess, the service, and the harmony they find at Perivolas.” It’s no wonder there’s so many imitators. 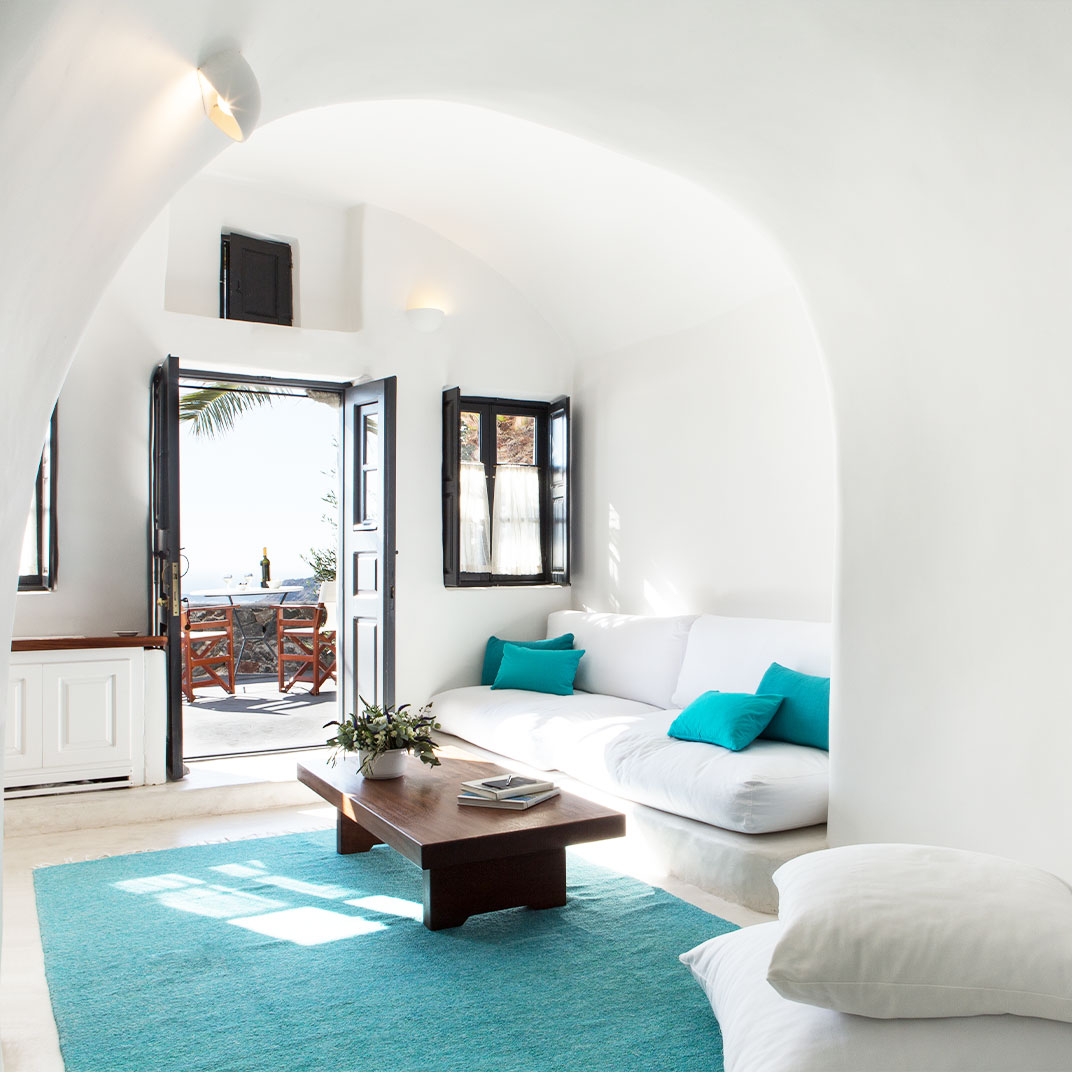