Glamping is a controversial word. For reasons we’ll get to shortly, it provokes strong reactions that range from happiness to hostility. Call these tent hotels and luxury camps whatever term you’d like — they’re all supremely stylish, and they offer guests a smoother way to rough it.

Glamping is a portmanteau that means “glamorous camping” — and we try not to use it too often in our hotel descriptions. For one thing, formalists would argue that it’s not really even camping. On the other end of the spectrum, camps that fit the definition think the term is reductive and trivializes an experience that, at many sites, is still designed to get you up close and personal with the natural world. Lastly, it just sounds kind of silly, as likely to bring to mind empty Instagram influencers as wild outdoor adventures. In fact, the only reason we’re using it here is for SEO. Bring on that sweet, sweet summertime search traffic.

In all seriousness, you can find more than a few degrees of glamour in glamping, and more than a few levels of luxury at the hotels on Tablet that provide canvas-covered accommodations. Much depends on the kind of guest you are. For some, it’s glamorous just not having to pitch your own tent or bring your own supplies. To show up and have everything be there for you — and all in good nick — is downright decadent. For others, the glamour begins with a butler, a Michelin-worthy menu, and a safari setup that would make Hemingway jealous. And for hardcore camping purists, well, glamping is your personal hell on earth — but have we mentioned you don’t have to dig a dookie hole?

In the end, we admit that glamping is a convenient bit of shorthand (and at least “fabulous” wasn’t the chosen adjective — who wants to go famping?). Whatever you call it, there’s a wide range of variations on the theme, and the Tablet selection has options that run the gamut. We’ve singled out some of the most stylish tent hotels below, ordered not by gradients of glamour, of course, but by rungs of roughing it. 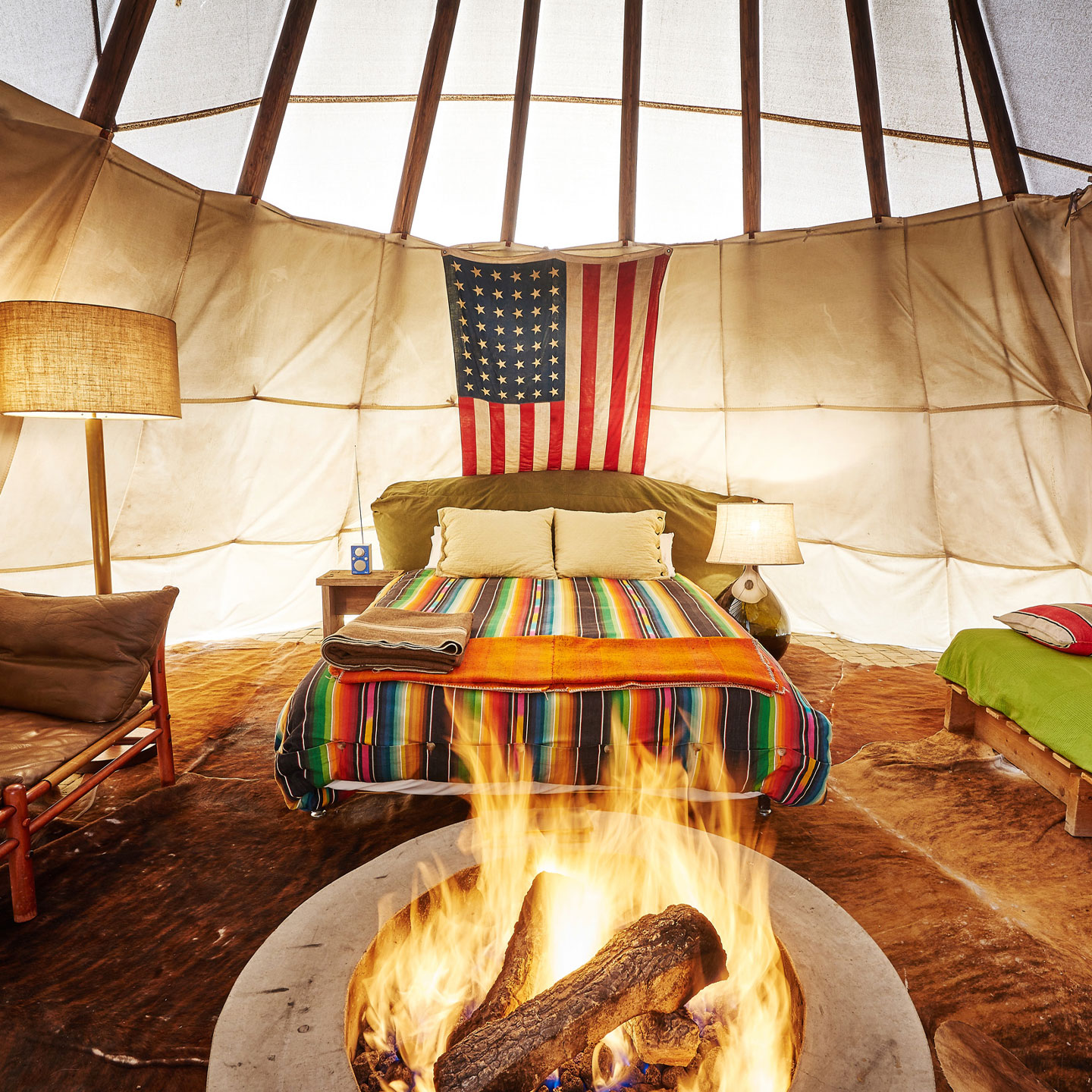 El Cosmico is one of our favorite hotels in the world, and much of our love stems from the variety of lodgings they offer. In addition to the vintage Airstream trailers they’re known for, there are tepees, yurts, and safari tents. They’re sparsely furnished, but what decoration there is is impeccably curated, exceedingly cozy, and oozing with character — which more than makes up for the fact that the bathrooms are not attached. 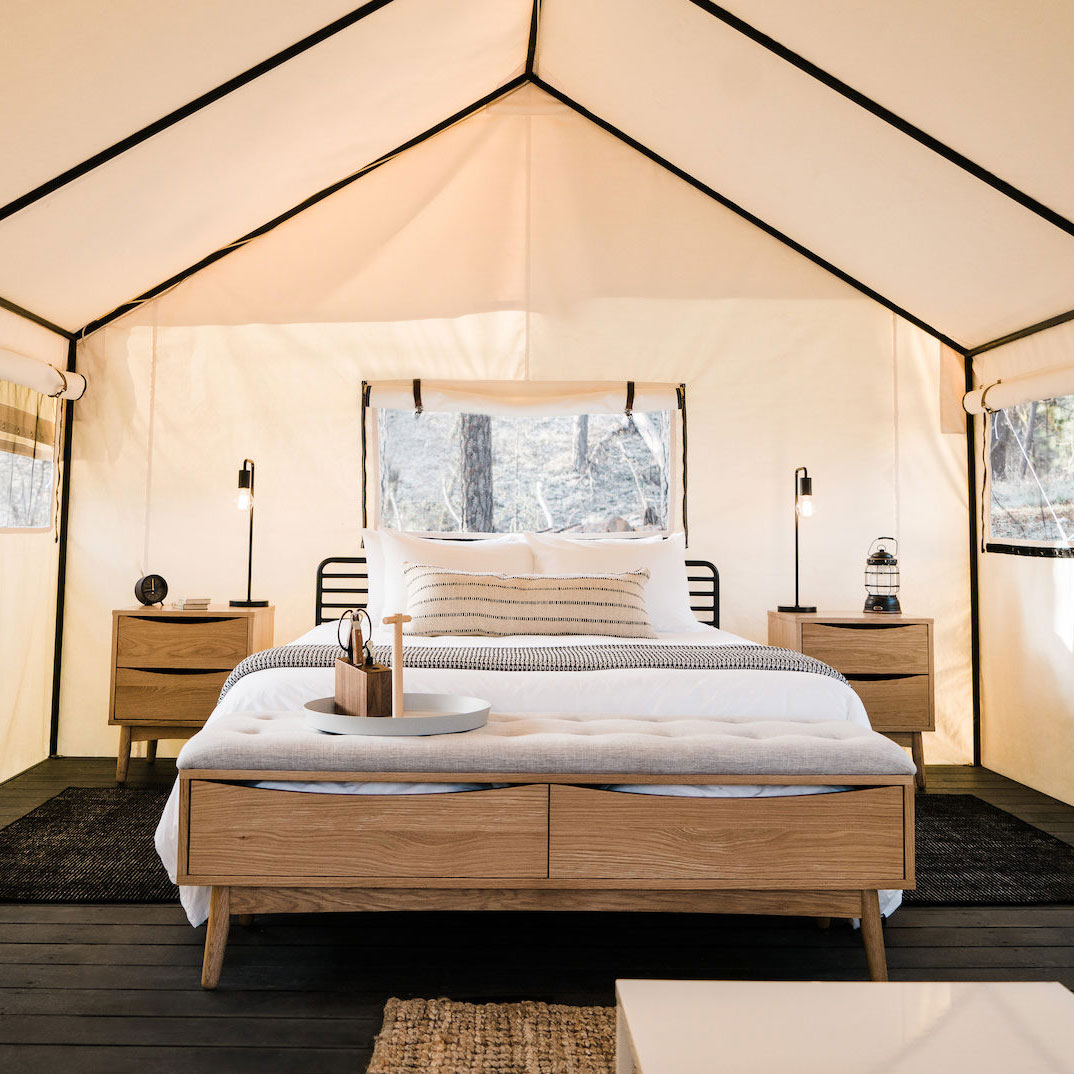 As stunning as Yosemite National Park is, it’s never been served by accommodations you would describe as stylish. AutoCamp changes that all at once, with its luxury tents, cabins, and fleet of custom-designed Airstream trailers (plus a Clubhouse, indoor and outdoor lounge, swimming pool, firepits, and general store. You’ve got all the comfort you need, on the doorstep of one of America’s most spectacular national parks. Also check out the Autocamp Cape Cod. 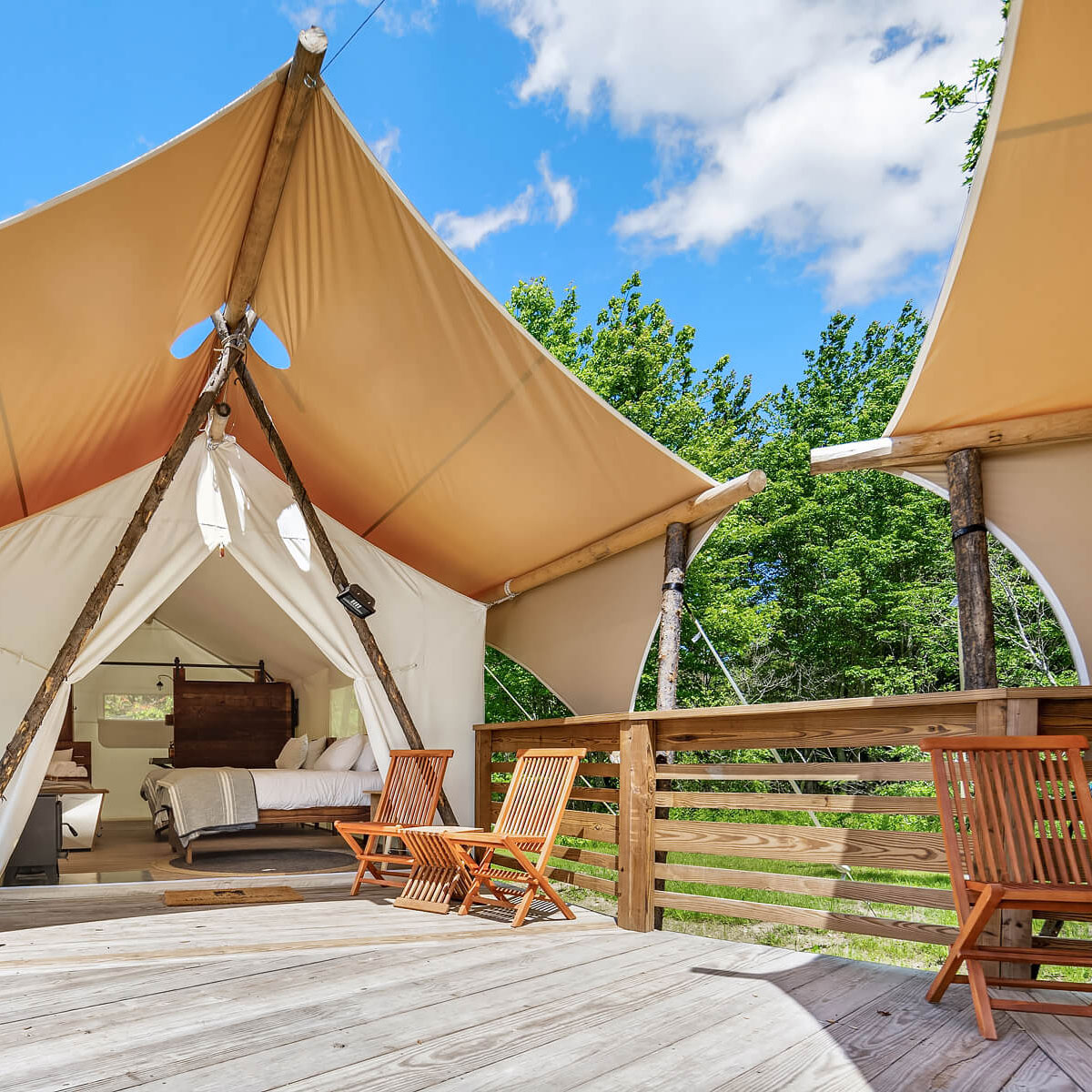 Acadia is Maine’s spectacular coastal national park, and Under Canvas is a Montana-based purveyor of luxury tented camps. Put the two together and you get this: an array of tented accommodations set on raised platforms, all decked out with furniture by the modernist-inspired West Elm brand, from the shared-bathhouse Safari tents to the mid-range options with private en-suite baths and the double-size Suite, which sleeps four. Check out these other Under Canvas camps: 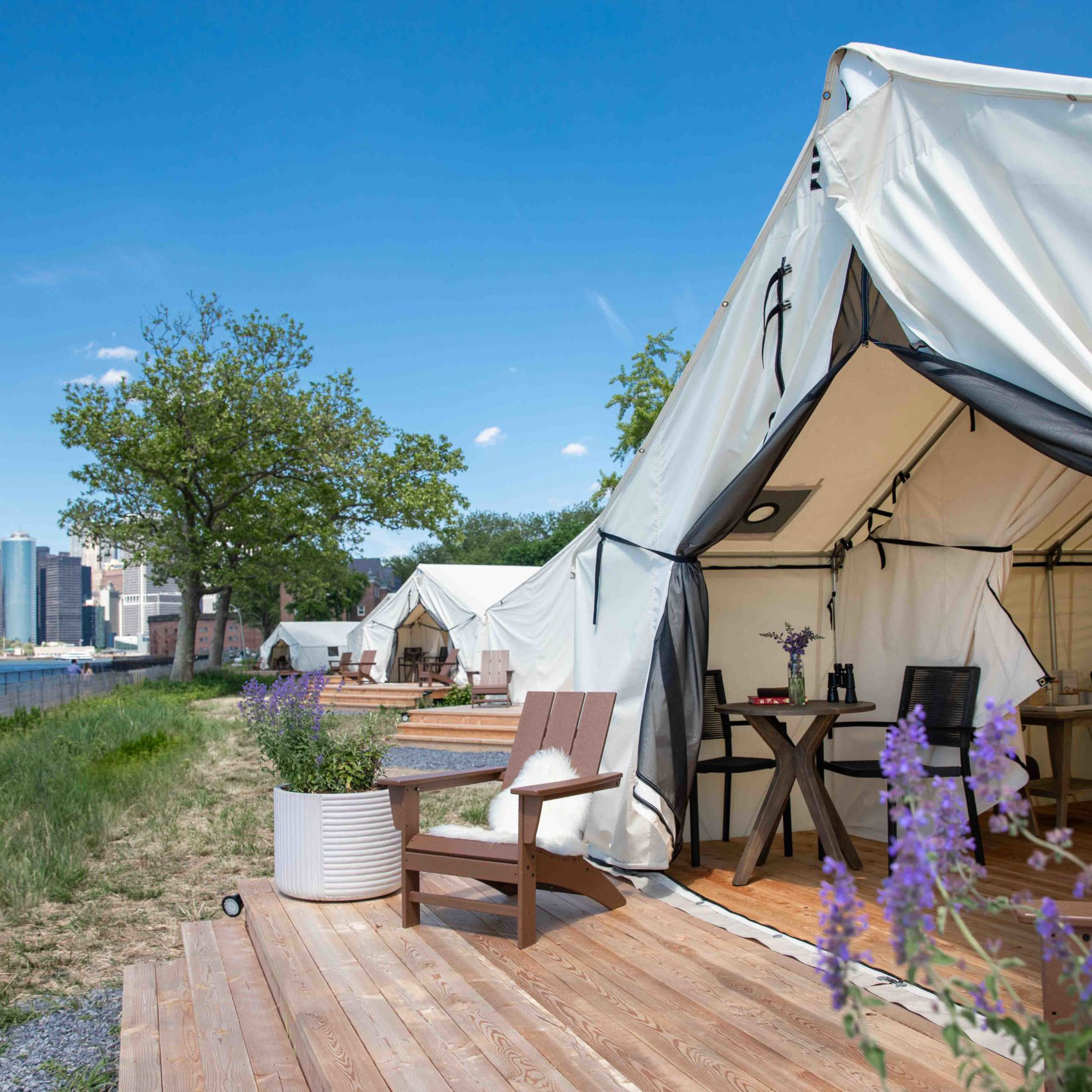 Governors Island isn’t quite typical of New York neighborhoods — set between Brooklyn and the Statue of Liberty, a short water-taxi ride from lower Manhattan, it’s a park that enjoys unparalleled views and an inimitable atmosphere. Collective’s tents and shelters offer a unique urban camp experience, accompanied by cooking classes, meditation and yoga sessions, live entertainment, and cocktails on the Sunset Terrace. Check out more Collective camps: 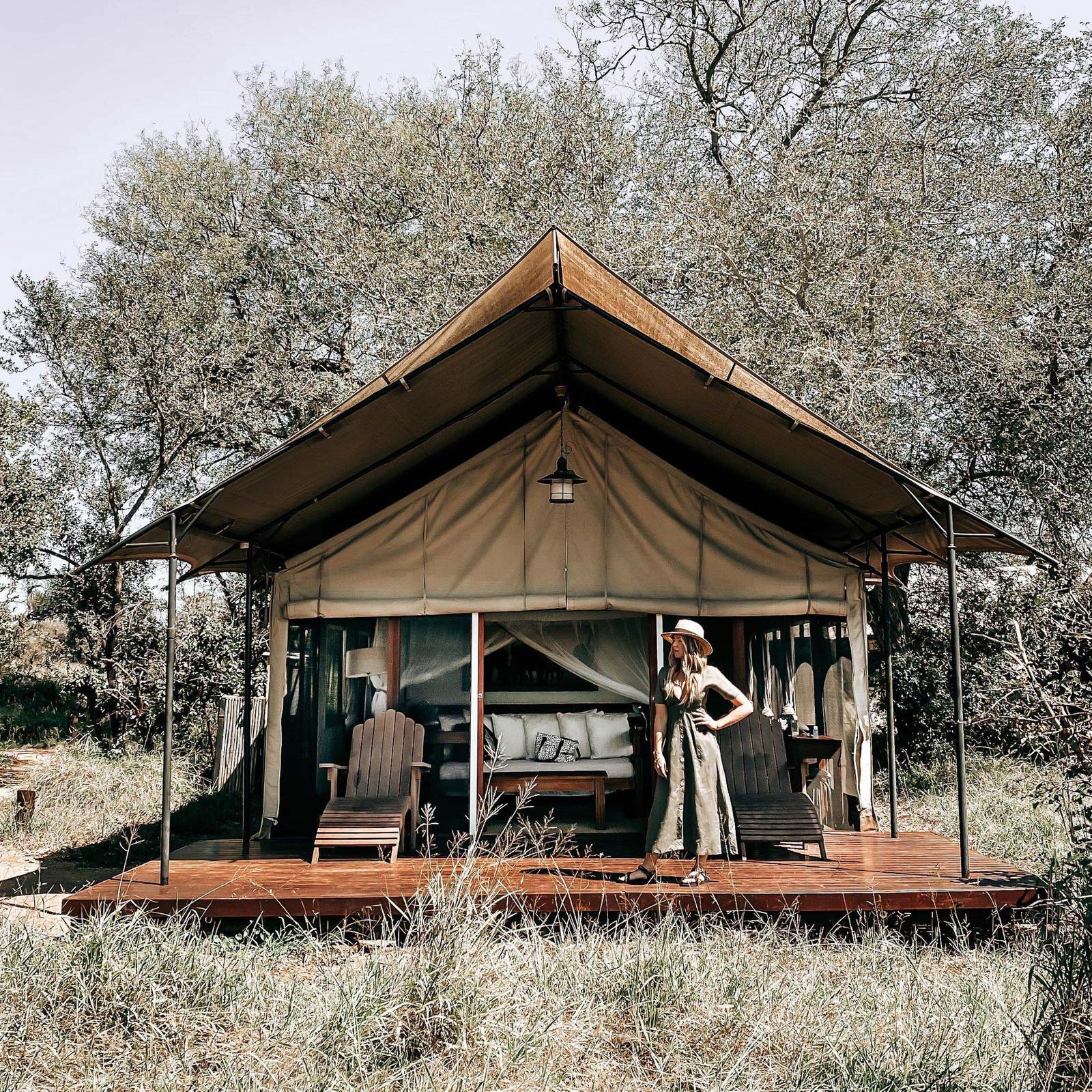 At the edge of South Africa’s famed Kruger National Park is the private Manyeleti Game Reserve — nearly a hundred square miles of wild bush, populated by all manner of game. The land is owned and managed by the Mnisi tribe, who’ve opened it up to a select few visitors: guests of the Honeyguide Tented Safari Camps. For the full safari experience, stay in the Mantobeni Camp, where the retro-romantic tents will give you a proper dose of what the hotel calls “Hemingway’s Africa.” 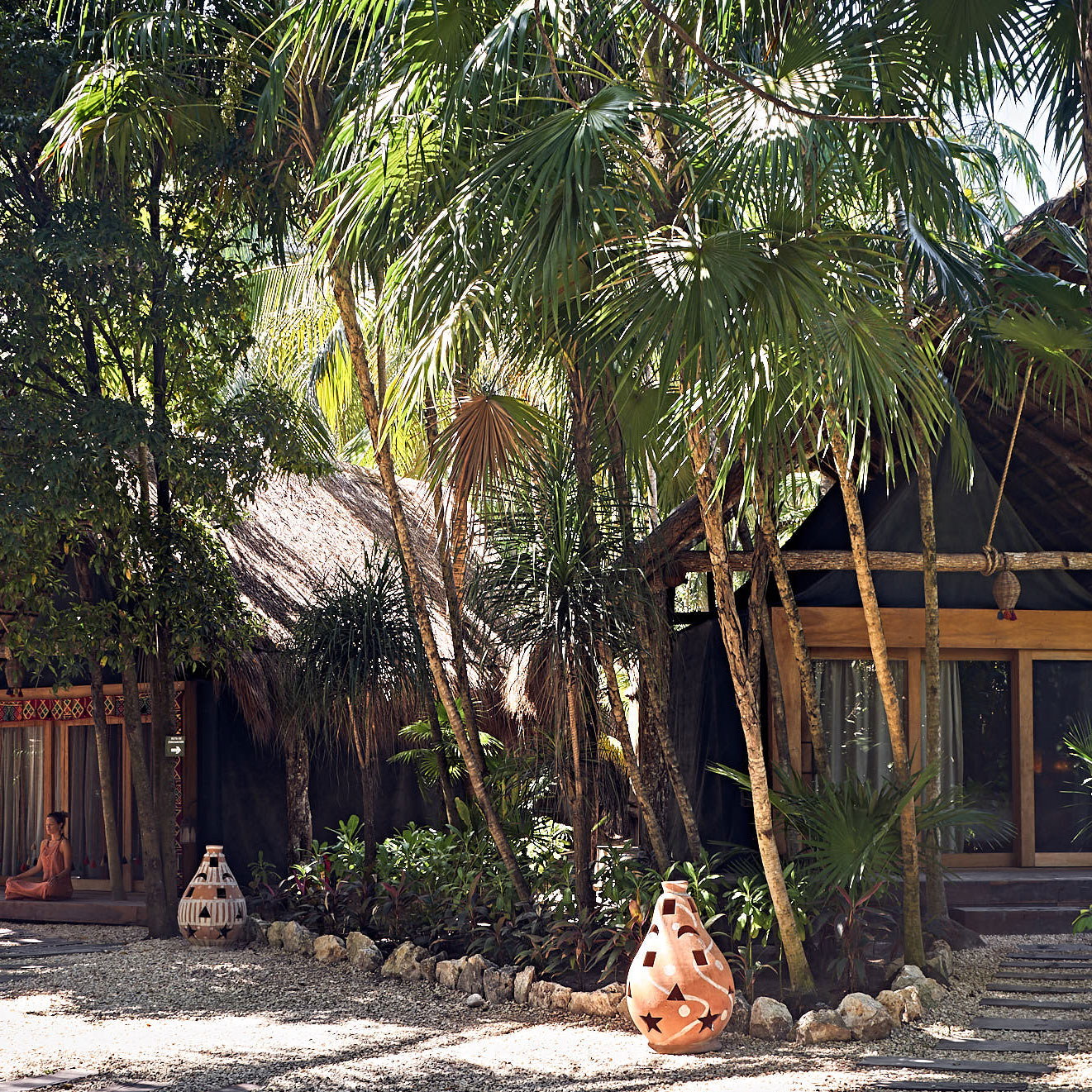 Located right on a white-sand beach, Nomade Tulum is a rustic-chic enclave that brands itself as a temporary habitat for, well, nomads. And what true nomad wouldn’t feel at home in a deluxe tent, especially one that’s been designed with the natural elements of the surrounding jungle and pitched only steps away from the Caribbean? Those with a wandering spirit will also enjoy the sense of community here, with workshops and retreats designed to “awaken the soul, shake the body, and free the mind.” 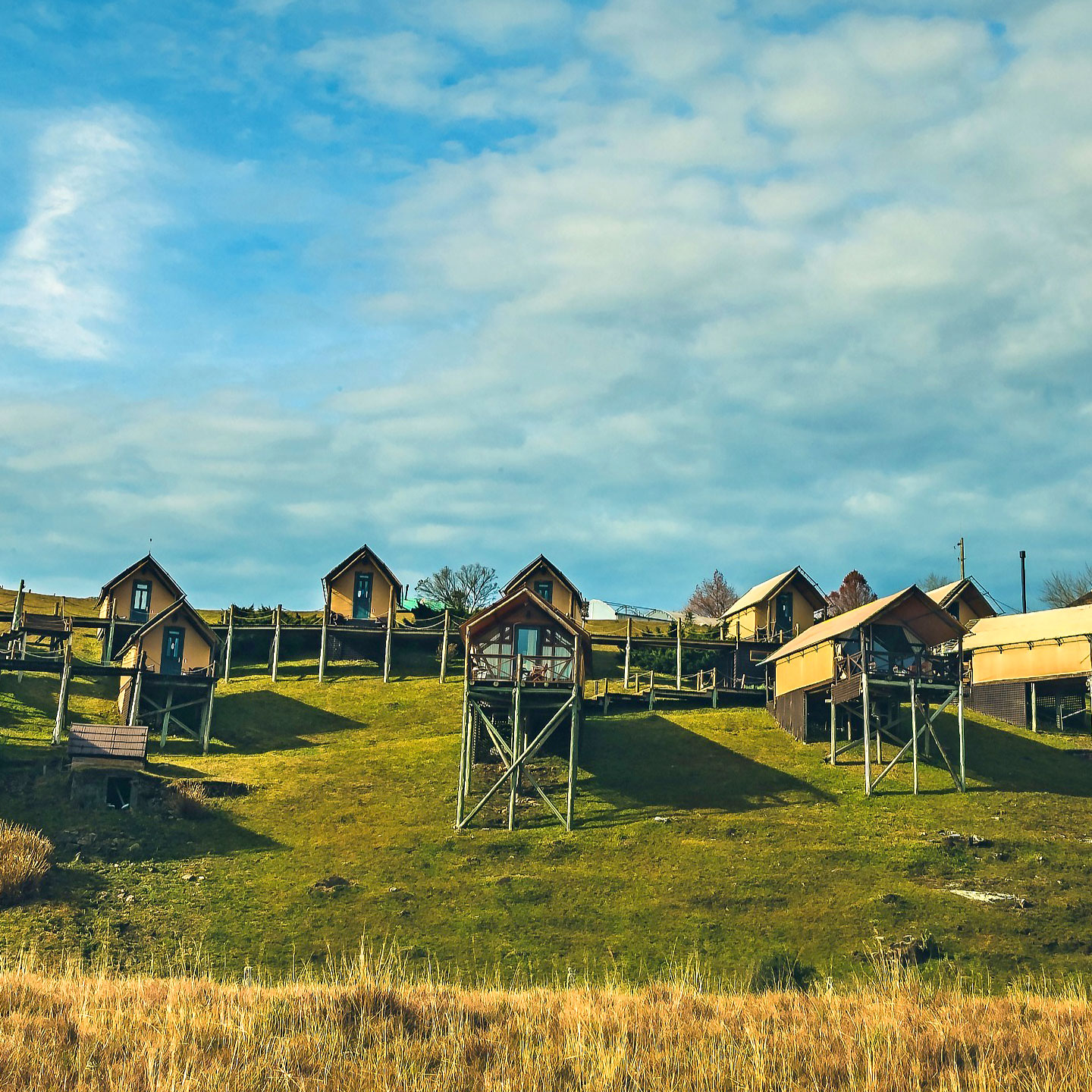 Parador Casa da Montanha is built into the hillside beside the largest series of canyons in South America. The main lodge has a stone fireplace and cozy cocktail bar, a terrace with a firepit, and a sunny dining area hosting a traditional breakfast buffet, plus a L’Occitane spa. Guest rooms are housed in free-standing wooden chalets connected by a series of outdoor walkways. Some are tent-like cottages, others actual tents, but all are packed with high-end comforts. 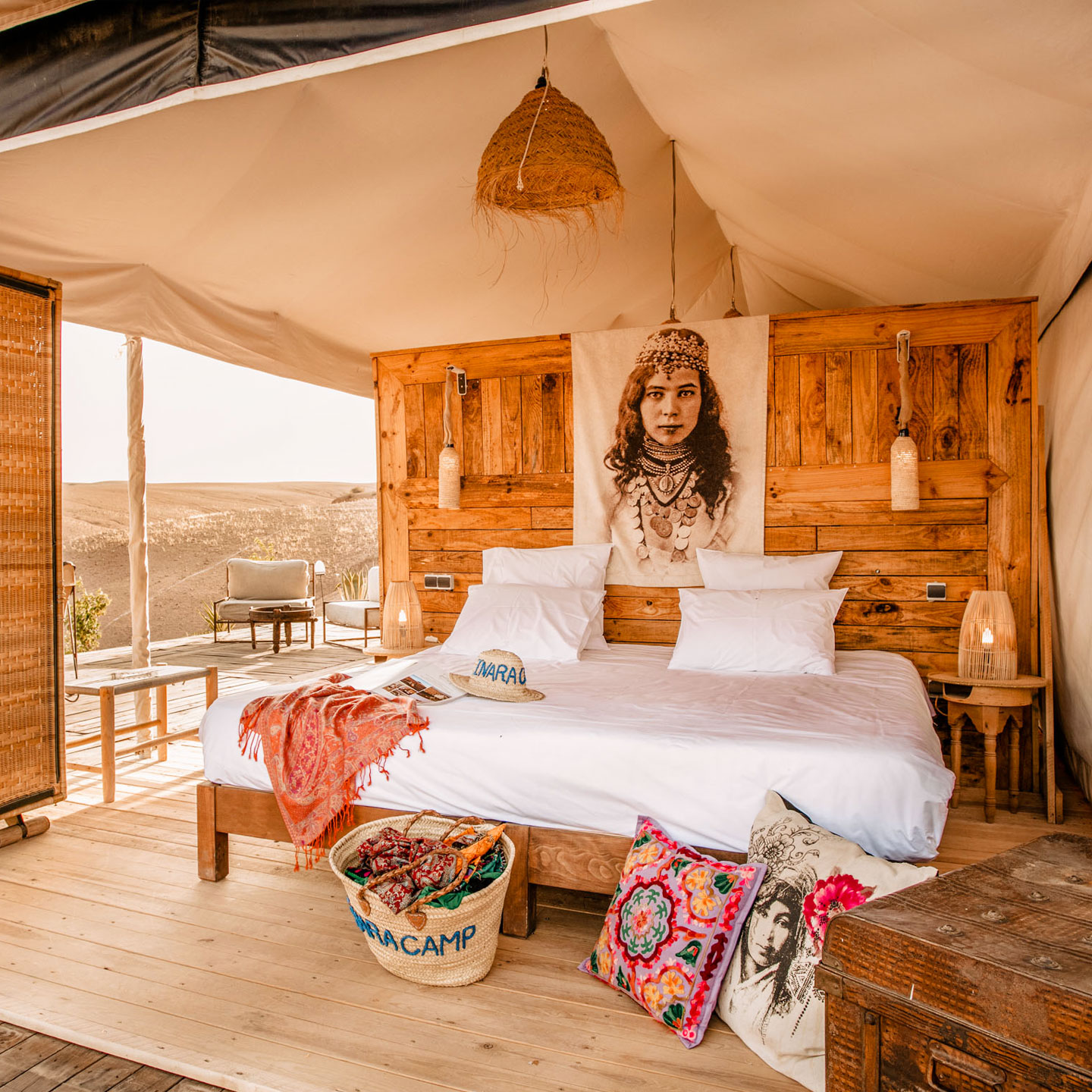 Inara Camp is less than an hour’s drive from Marrakech, in the Agafay desert at the foot of the Atlas Mountains. It’s a collection of impressively plush safari-style tents surrounding a swimming-pool oasis in what feels like the exact middle of nowhere. The aesthetic is tailored to its location and its Berber inspiration, but the concept is the same as any luxury tented camp: provide as much comfort as possible while still fully immersing guests in the natural environment.

The Resort at Paws Up 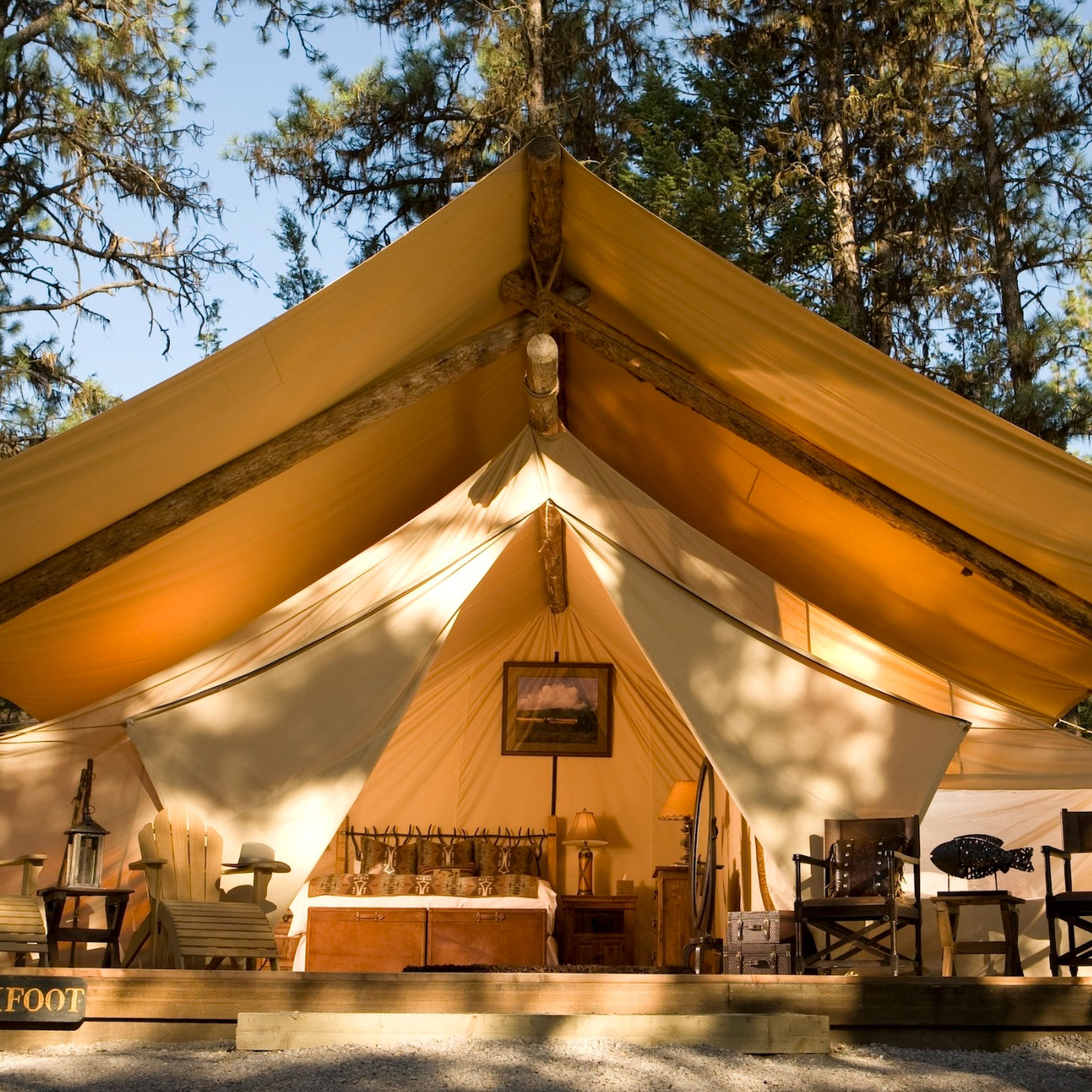 The Resort at Paws Up is for the traveler who wants their wilderness escape to include all the comforts of civilization. You’ll be out in the elements, but in the most luxurious manner imaginable. The tents here feature just about every comfort you could want, from hardwood floors, en suite bath, air conditioning, and heat, to internet, cell service, and a camping butler. If you’re looking to combine mountain-West ruggedness with white-glove service, this is the place. 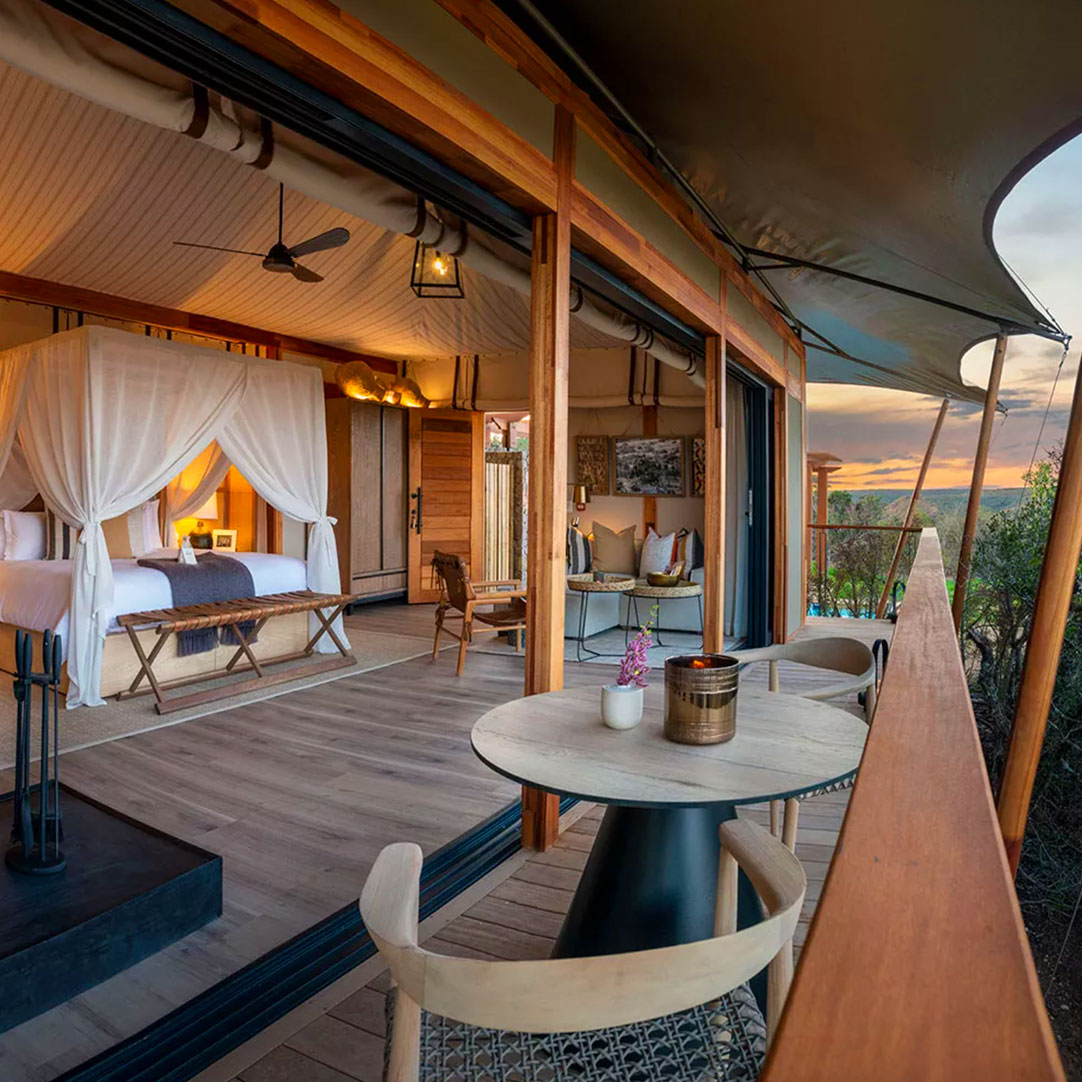 The second of the Shamwari Private Game Reserve’s tented lodges is Shamwari Sindile, whose nine freestanding tents are slightly elevated above the veld along the side of the Bushman’s River, each one minimizing its environmental footprint while also paying tribute to the habitat of the solitary leopard. Tents or not, these are luxe accommodations, with indoor fireplaces, plunge pools, and outdoor showers. From here you’ve got a front-row view of the Eastern Cape wildlife. 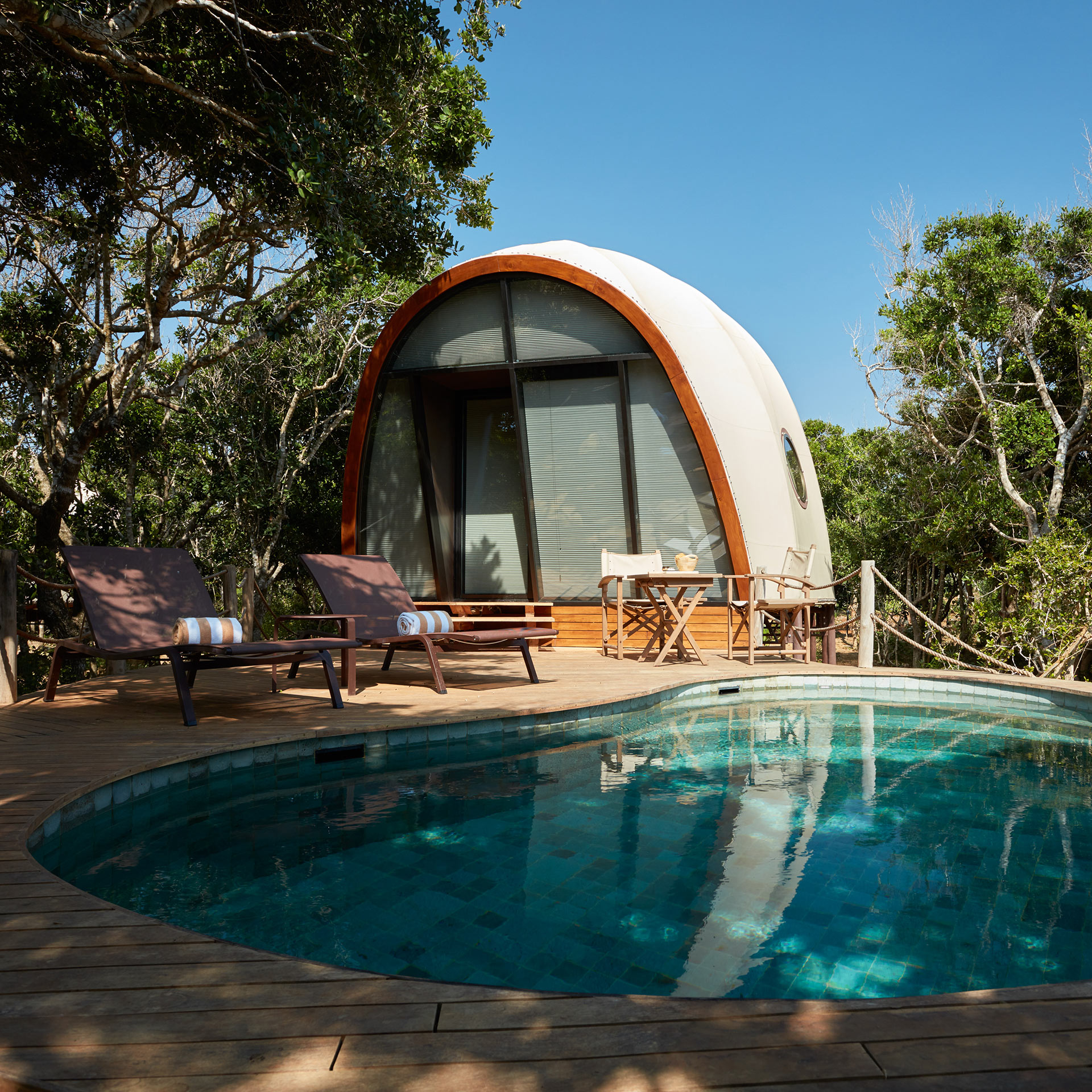 Sometimes a hotel’s appeal is as simple as the sum of its parts. The Sri Lankan coast is an extraordinary place for a holiday, and the luxury-tent safari camps of southern Africa offer an unforgettable immersion in nature. Put the two together and you’ve got Wild Coast Tented Lodge, on the southeast coast of Sri Lanka, sandwiched between a gorgeous beach and the utterly wild Yala National Park, home to elephants, leopards, monkeys, and much more. 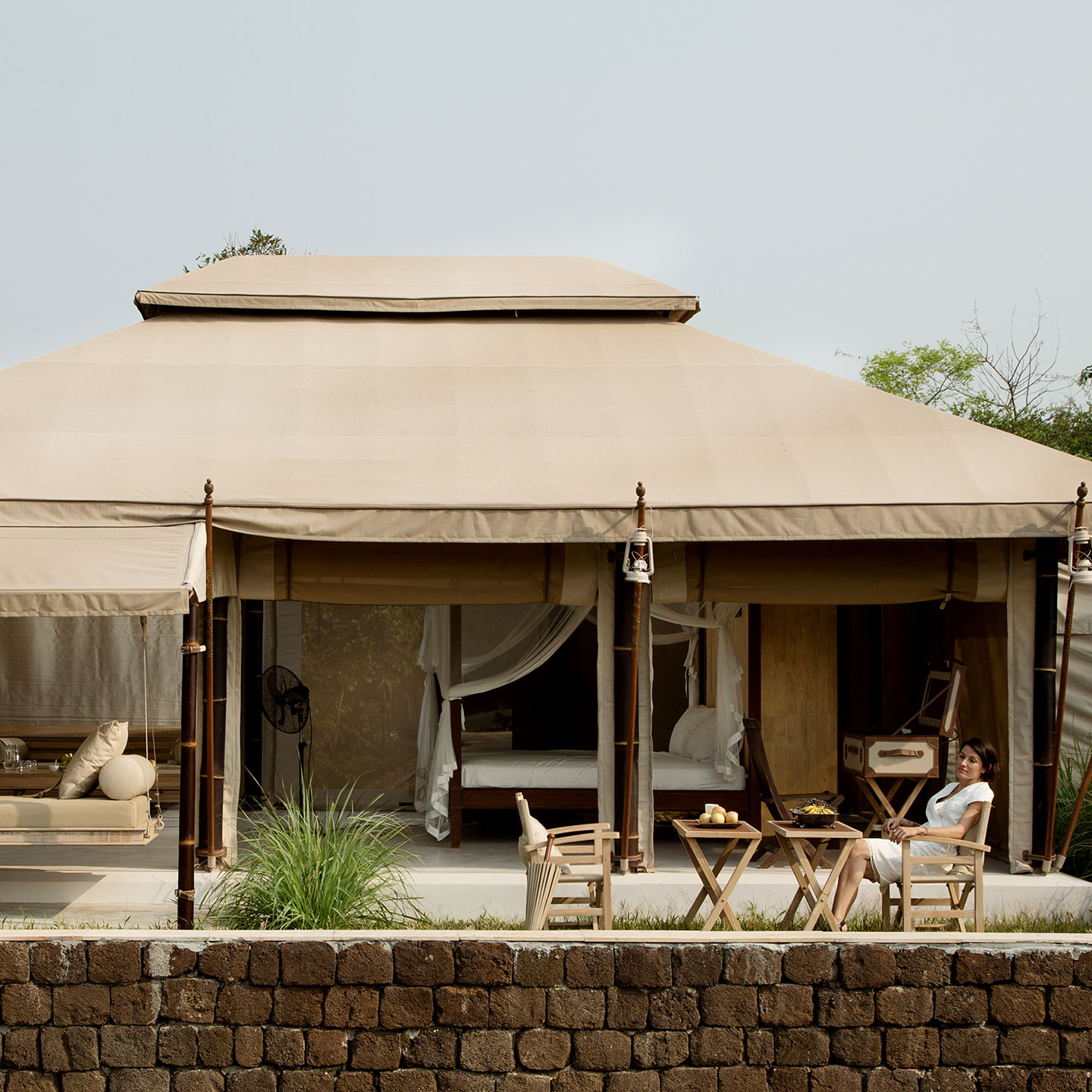 When beige refers to the organic sailcloth with which eight tented guest rooms are covered, it’s anything but dull. The Beige of Siem Reap is luxury camping — virtually in the shadow of Angkor Thom, the ancient capital of the Khmer Kingdom — that sets out to provide guests a connection to Cambodia’s past. The tents are in harmony with their hallowed surrounds, and are furnished with antiques that aim to evoke the French cultural influence throughout the country’s history. 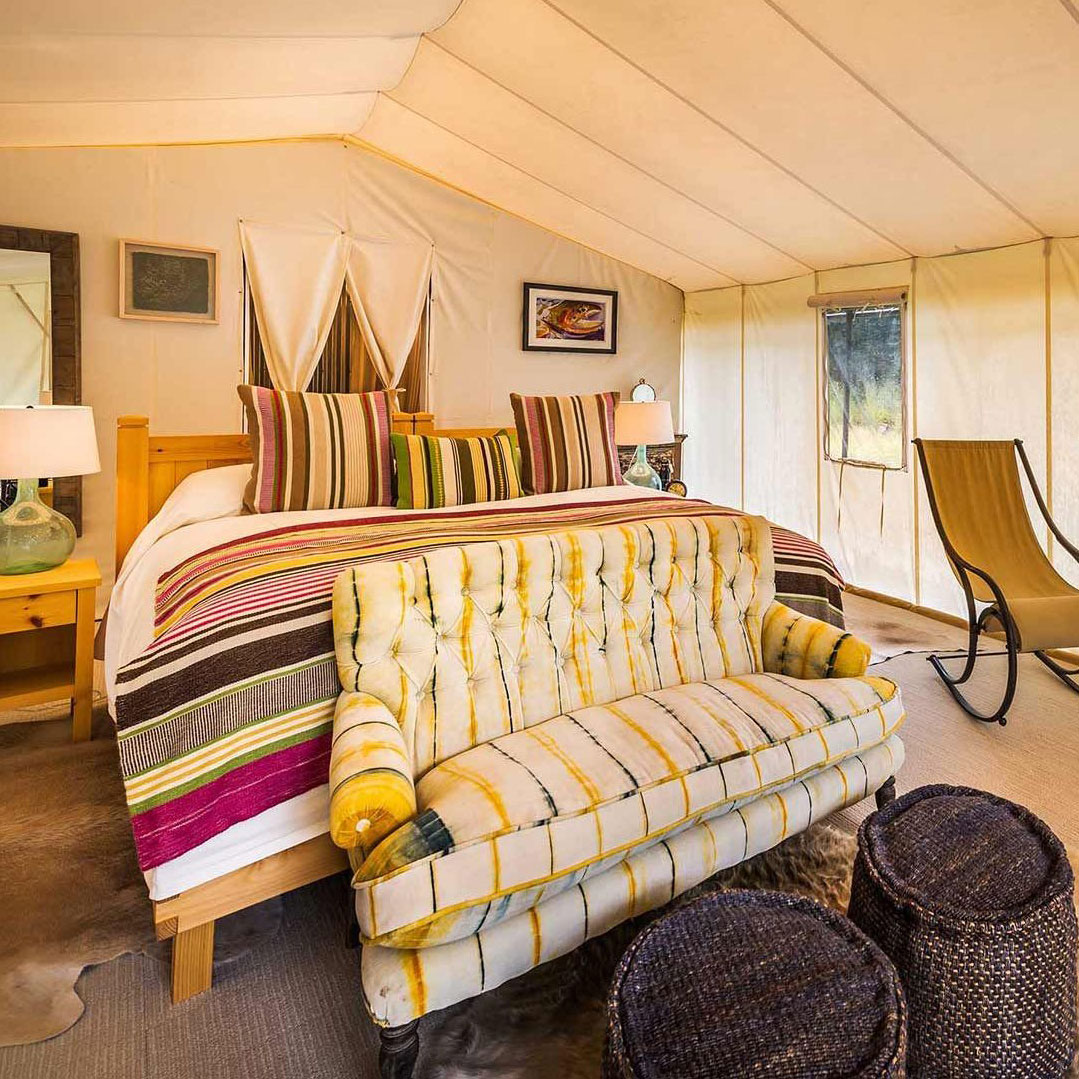 Four miles downriver from the much-lauded Dunton Hot Springs resort, this summer-only retreat is made up of eight freestanding tents — four at river’s edge, perfect for fishing, and four more up the hill, surrounded by aspen trees. Each comes with private porch, king bed, and en-suite bathroom with soaking tub and shower, and they’re heated by gas stoves. Guests also have access to all manner of mountain sports in Dunton’s 1,600 acres of awe-inspiring wilderness. 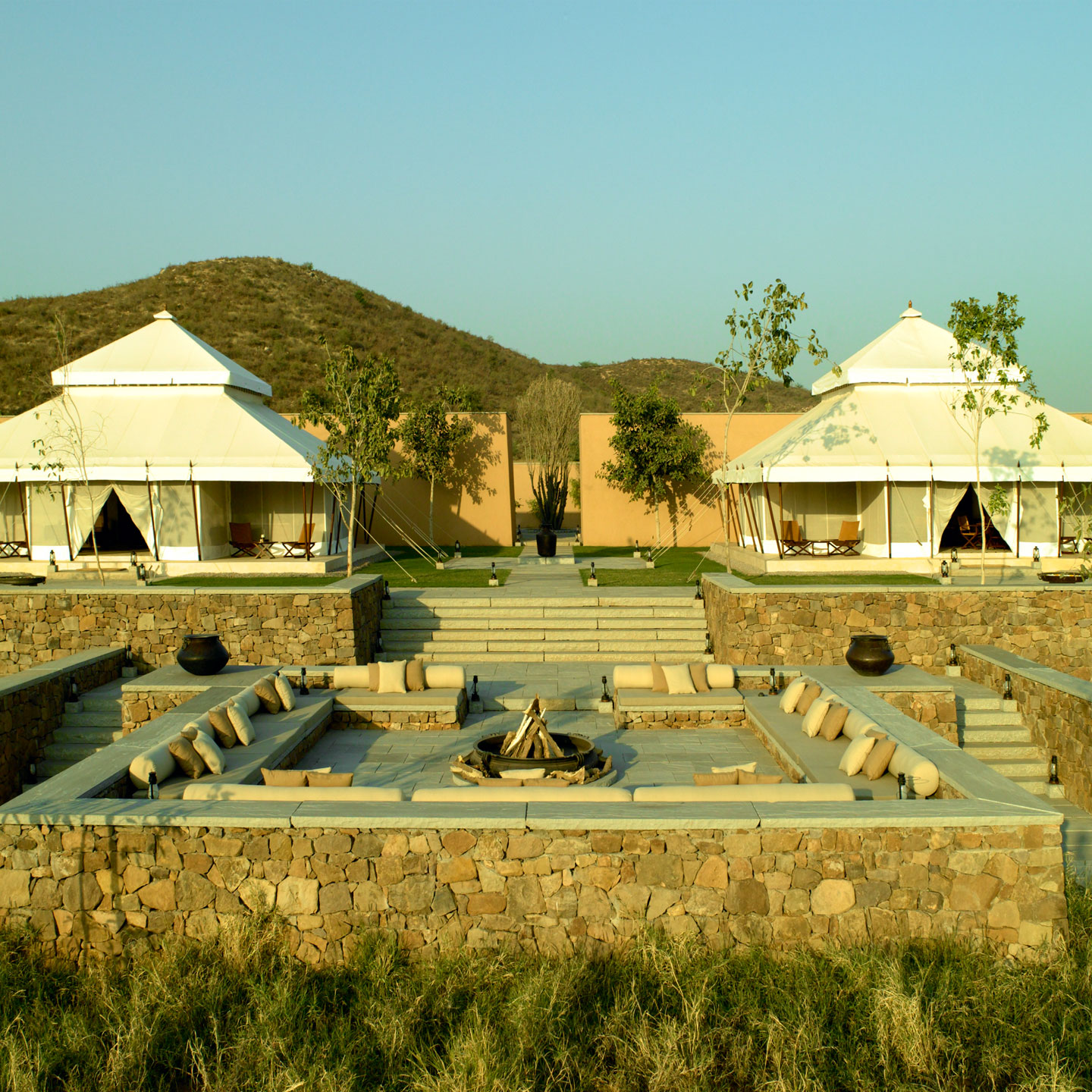 Staying at Aman-i-Khás means staying in Rajasthan’s Ranthambore National Park, surrounded by acres of wilderness and wildlife, including one of India’s top tiger reserves. The hotel is little more than an encampment of tents, each one heated and air conditioned, but minimally decorated in a combination Mughal/British colonial style, with simple, spare furnishings. As much as it can be, this is a modest form of luxury — the local wildlife is the main attraction. 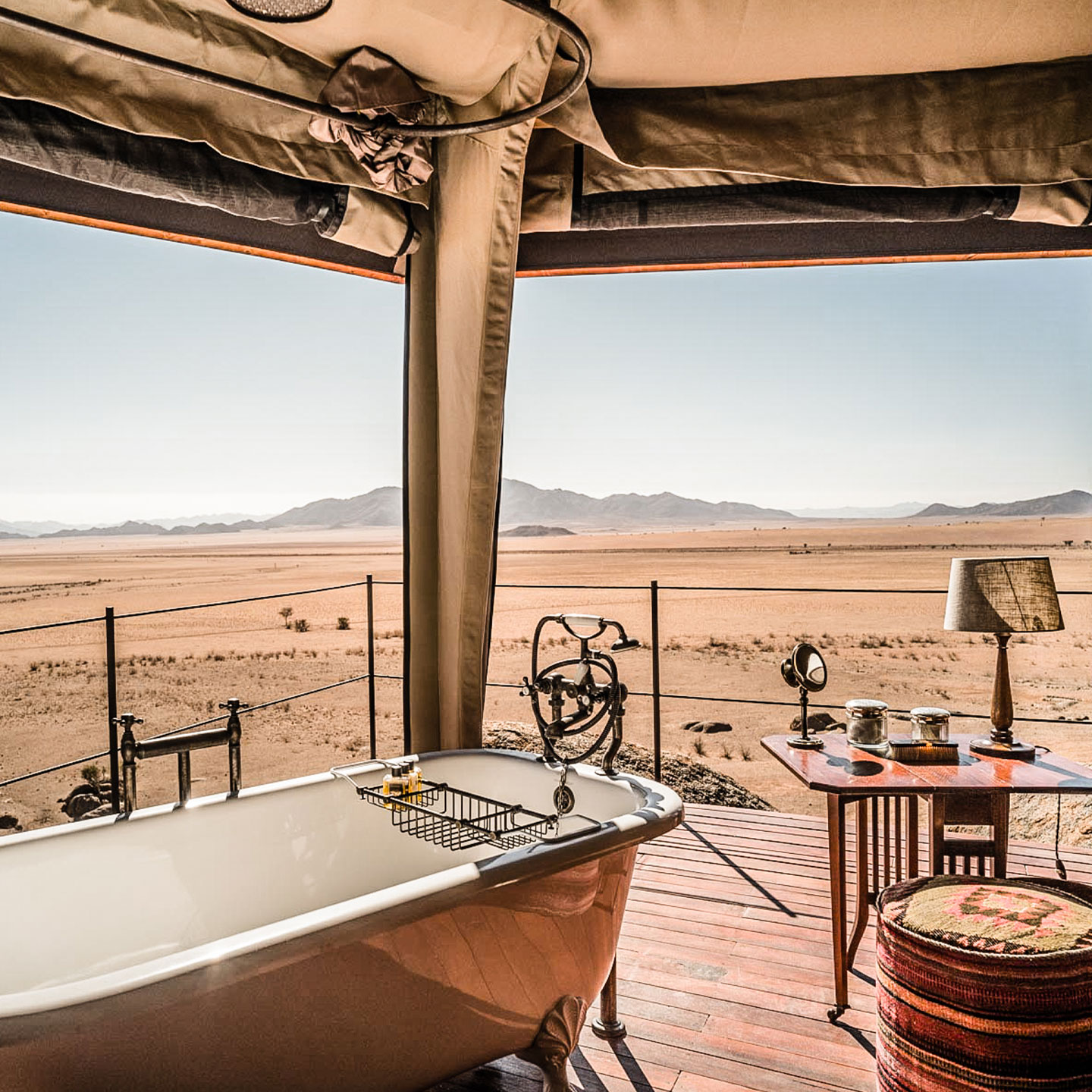 Sonop places as little as possible between you and the picturesque Namib Desert. Fear not: Sonop’s ten luxurious tents, on platforms elevated above the rocky desert floor, are uninteresting to the leopards, hyenas, jackals, and foxes that you’ll be sharing the landscape with. And given the plushness of the accommodations — they’re inspired by Twenties-vintage British colonial style — the experience here is a long way from ordinary camping.