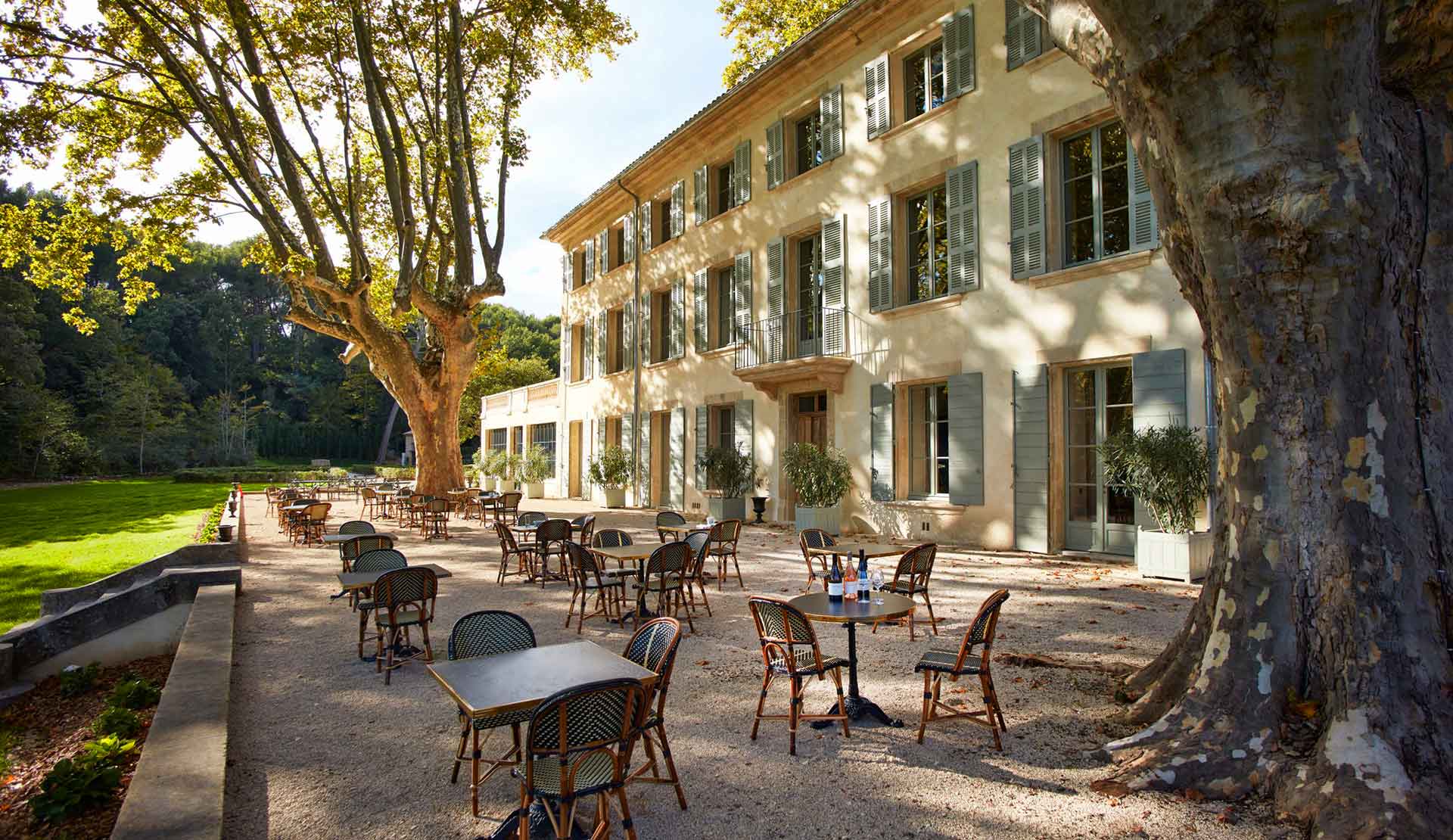 The Domaines de Fontenille group is famous within the hotel industry for getting things right. The little things, the big things, and everything in between. The opening of their sixth hotel, Domaine de Primard, proves that some things never change.

When Frédéric Biousse and his husband, Guillaume Foucher, bought the Domaine de Fontenille estate, they planned to restore the centuries-old property and keep a slice of quiet country life for themselves. That’s not quite what happened. It began as Domaine de Fontenille, now it’s Les Domaines, a group of hotels that quickly grew from the single estate into a bucolic mini-empire of fine dining and pastoral pleasures in France and Menorca. All have recently reopened their doors after a sabbatical forced by the pandemic. But even more reason to celebrate — and we definitely are — is the June 7 debut of their latest property, the hotly anticipated Domaine de Primard.

As you’ll see below, each Domaines hotel is distinct, but every property in the collection keeps a few cues in common. These are places that focus on their gorgeous surroundings — the countryside or the water — and seek to give guests plenty of public spaces from which to enjoy the outdoors and each other. A focus on local food is also paramount — and it’s often sourced from the hotel’s own gardens.

Their new hotel, Domaine de Primard, has more in common with the original, Domaine de Fontenille, than any other. Like its predecessor, it’s something of a true maison de campagne, or house in the countryside. Here, rooms disperse between the large chateau and several outlying buildings. Guests are meant to sit and visit on the benches under the trees.

“It’s really a family house,” Laurent Branover, CEO of the collection, tells Tablet. But by that he means any type of family, any gathering of people close enough to leave home and spend some quality time away from real life. It’s another philosophy they hope spans the collection — to have many options, for many types of guests. “If we use Primard, there’s a bistro restaurant… maybe you want to do that with your friends,” says Branover. “And then if you want to come back with your boyfriend or girlfriend,” there’s a gourmet restaurant by Michelin-rated chef Eric Frechon.

But don’t get the wrong idea. Despite the group’s predilection for fine dining, the hotels are more casual than the phrase French gourmet might conjure. “We do have a great experience, but we are relaxed,” notes Branover. Hotel staff wear jeans, and there are no white tablecloths at the restaurants. It’s an attitude that’s normal for high end hospitality in New York, he laughs, but rare in France. It can also be comforting, especially at places meant as outlets for escape. Even their Hotel Les Bords de Mer in Marseille, envisioned as something of a business hotel in the city, is perched on the seashore, each room gazing directly over a surreal blue to encourage daydreams. On a call with Tablet, Branover twice flipped his camera outwards at an outrageously picturesque schooner floating in the distance.

It’s something of a pleasant irony, we think, that because Biousse and Foucher couldn’t manage to tear themselves away from the endeavors of real life, when you come to one of their hotels, you’ll have almost no choice. 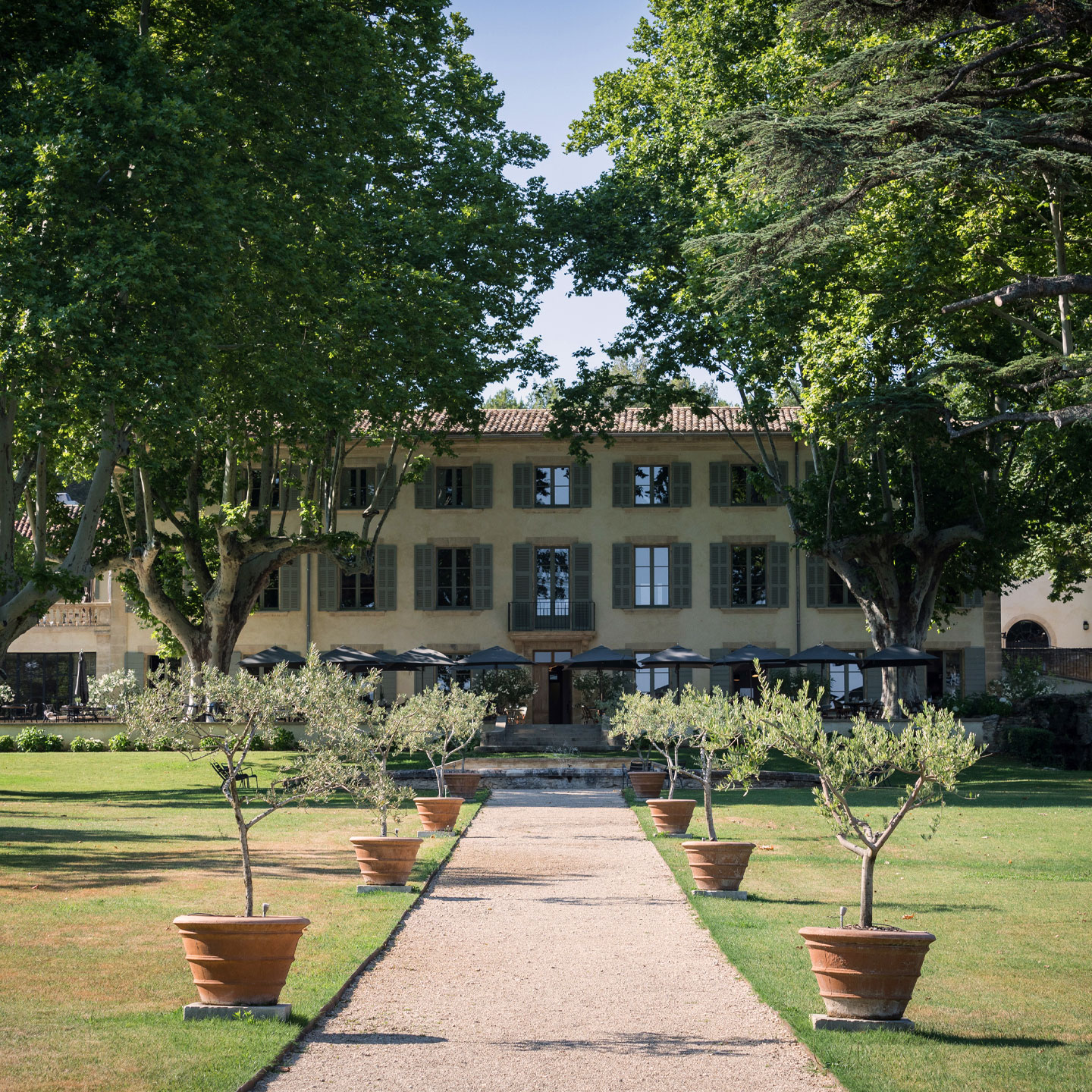 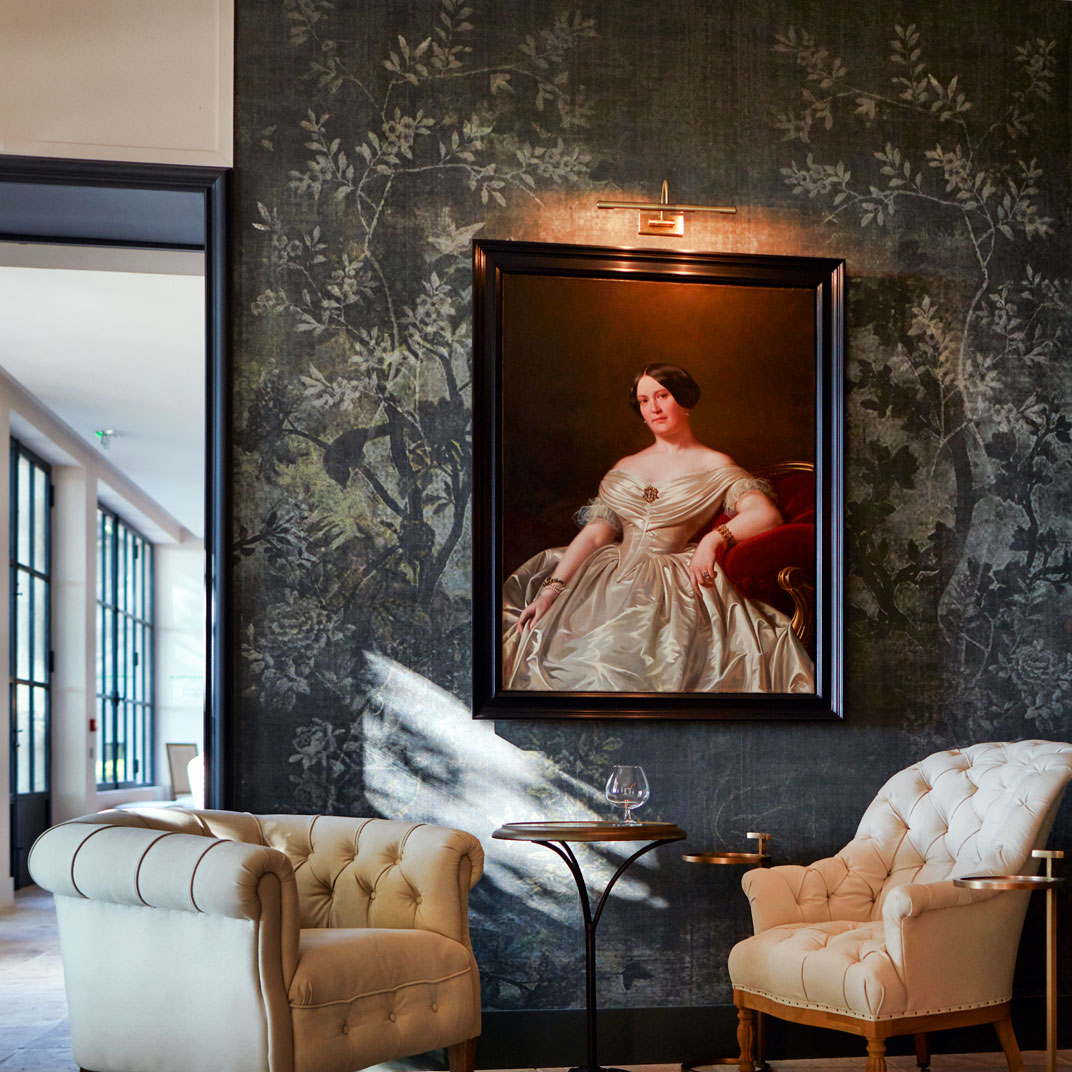 As a house, the Domaine de Fontenille, in Provence’s Luberon Valley, dates back to the eighteenth century, and the estate goes all the way back to 1638. But in its current incarnation as a luxury hotel, it’s more or less brand new. This might just be the best possible case for hotel guests, as you soak in an abundance of historical atmosphere, even as you benefit from a thoroughly modern approach to hospitality — in a new hotel, there’s no such thing as “we’ve always done it this way.” That’s not to say they’ve entirely dispensed with tradition. The experience is still, delightfully, reminiscent of the Provençal farmhouse fantasies we’ve all had. There’s a contemporary sheen to the décor, and all the necessary technology in the rooms, but it never breaks the spell. 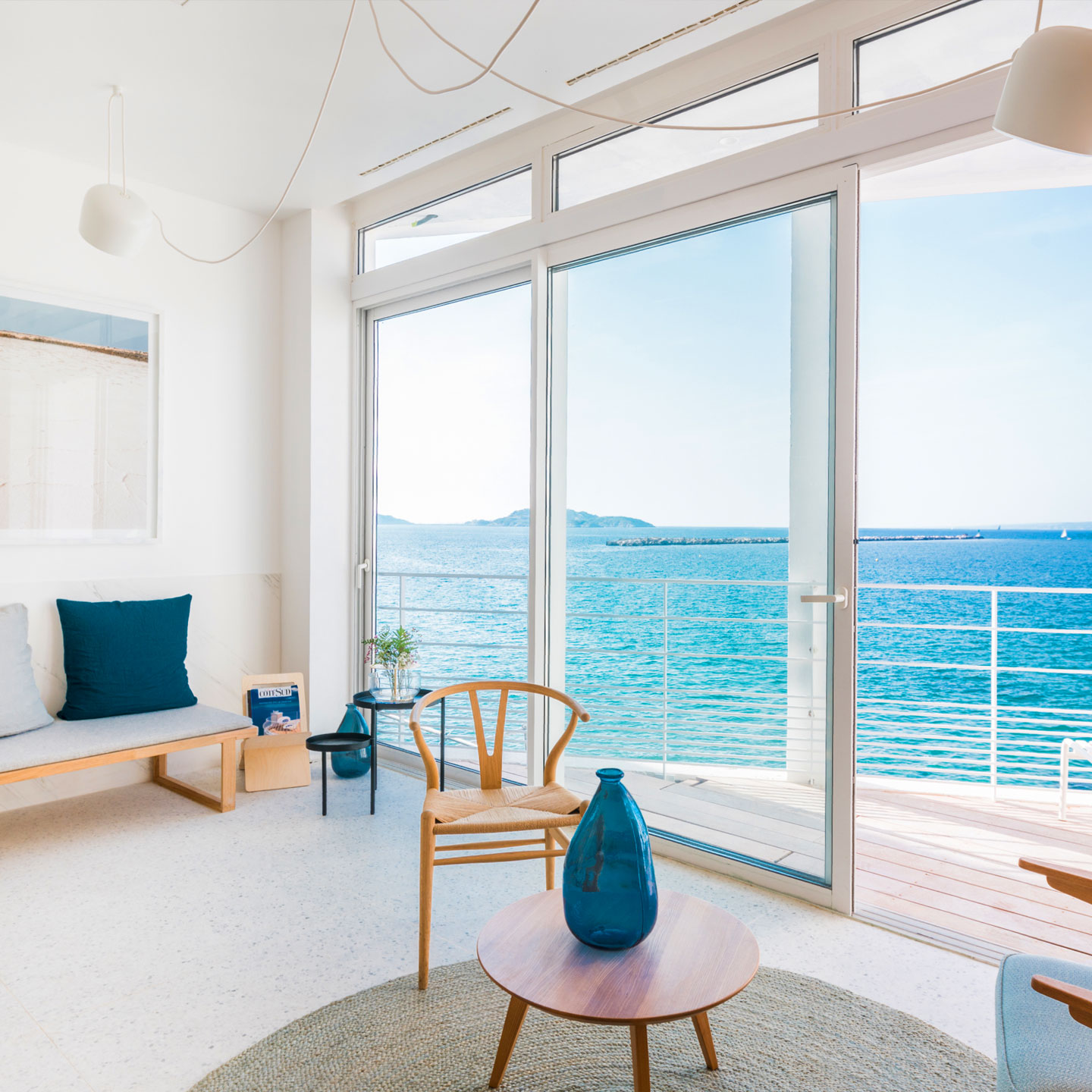 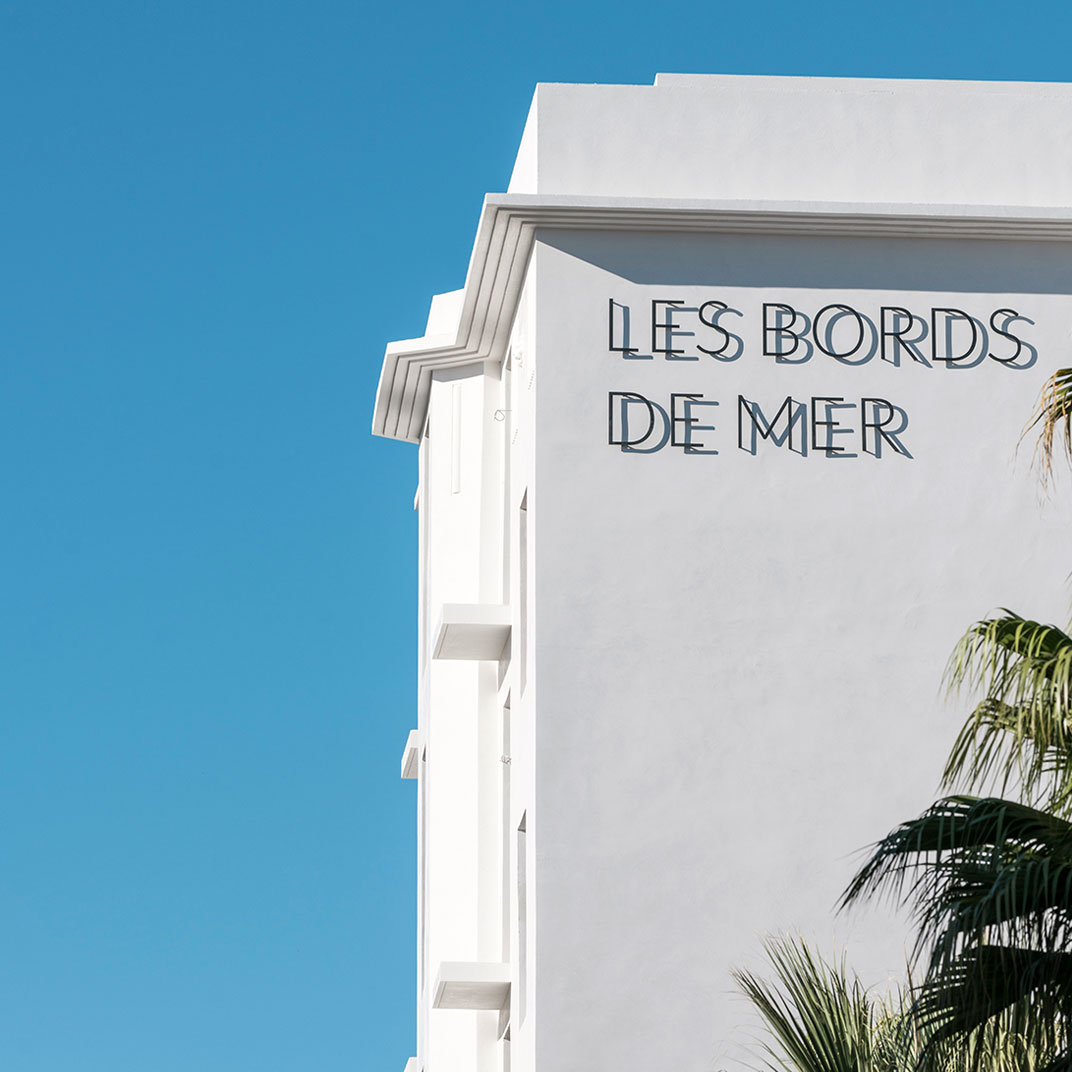 Les Bords de Mer simply means “the seaside,” and as a name for this particular hotel, it’s perfectly descriptive: it’s set right on Marseille’s waterfront, with all of its 19 rooms facing directly out to sea, so close that you could practically dive into the harbor from your balcony. (Note: do not do this.) It’s got, in some ways, the best of two worlds: the ocean views and Mediterranean exposure that make the Côte d’Azur a perennially desirable destination, and close access to Marseille, one of France’s most diverse and vibrant cities — it’s five minutes’ walk from the Vieux-Port and the old town center. The style is light and bright, inspired by the optimistic modernism of the Fifties and contemporary simplicity. 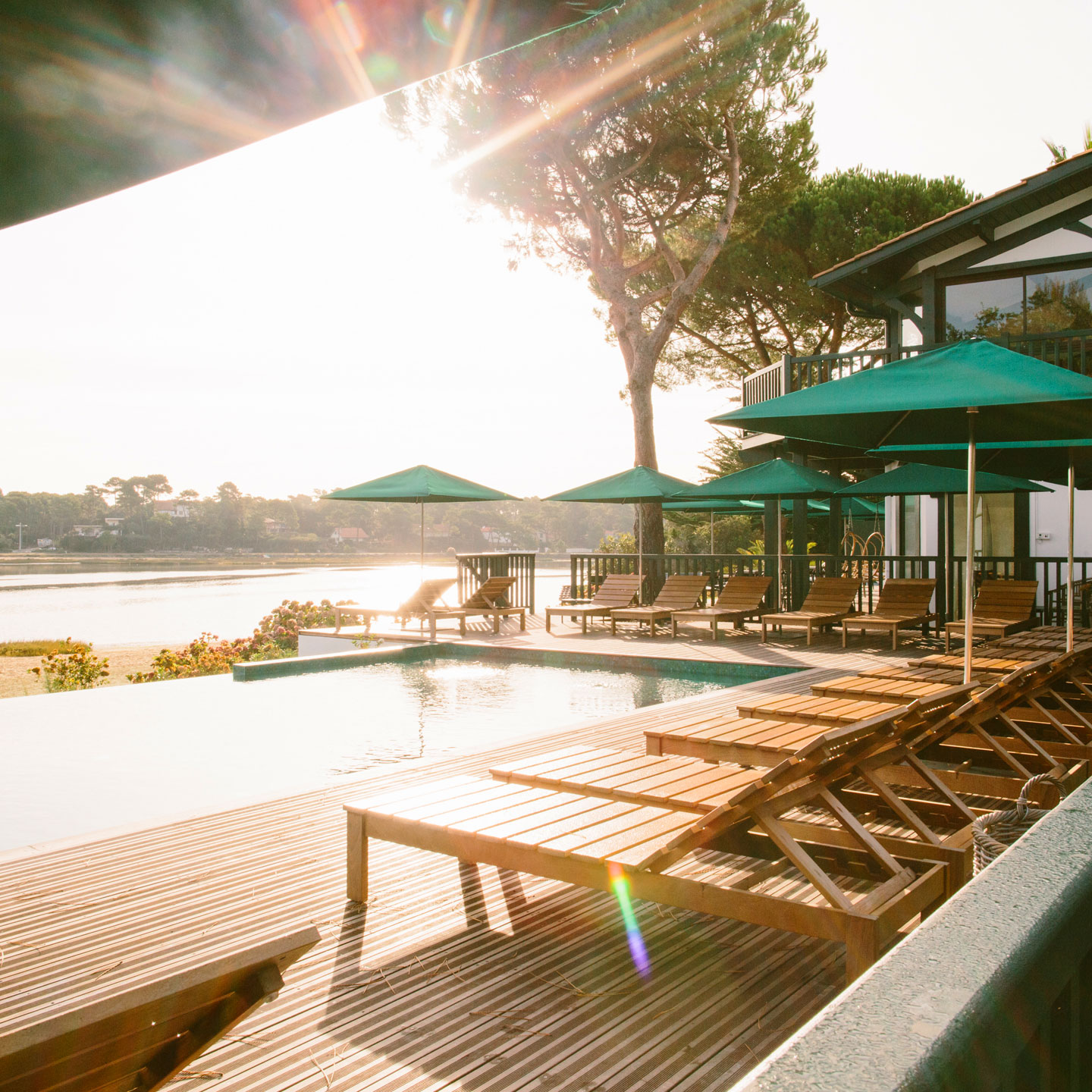 Think of the French seaside and it’s likely you’re imagining either the balmy Riviera or the coastal towns of Normandy. No less appealing, however, is France’s Atlantic coast, including the resort town of Hossegor, just up the coast from Biarritz. Other hotels face out to sea; Les Hortensias du Lac looks the other way, over Lake Hossegor, less than a quarter-mile inland from the surfers and swimmers at the Plage de la Gravière. Here life is rather more tranquil — a feeling that’s only reinforced by the small size of this newly renovated Art Deco luxury resort. Twenty-five rooms is small by any measure; most of the rooms here look out over the lake itself, and all are newly decorated in a style that owes more than a little bit to the idea of a Hamptons-style surf shack. 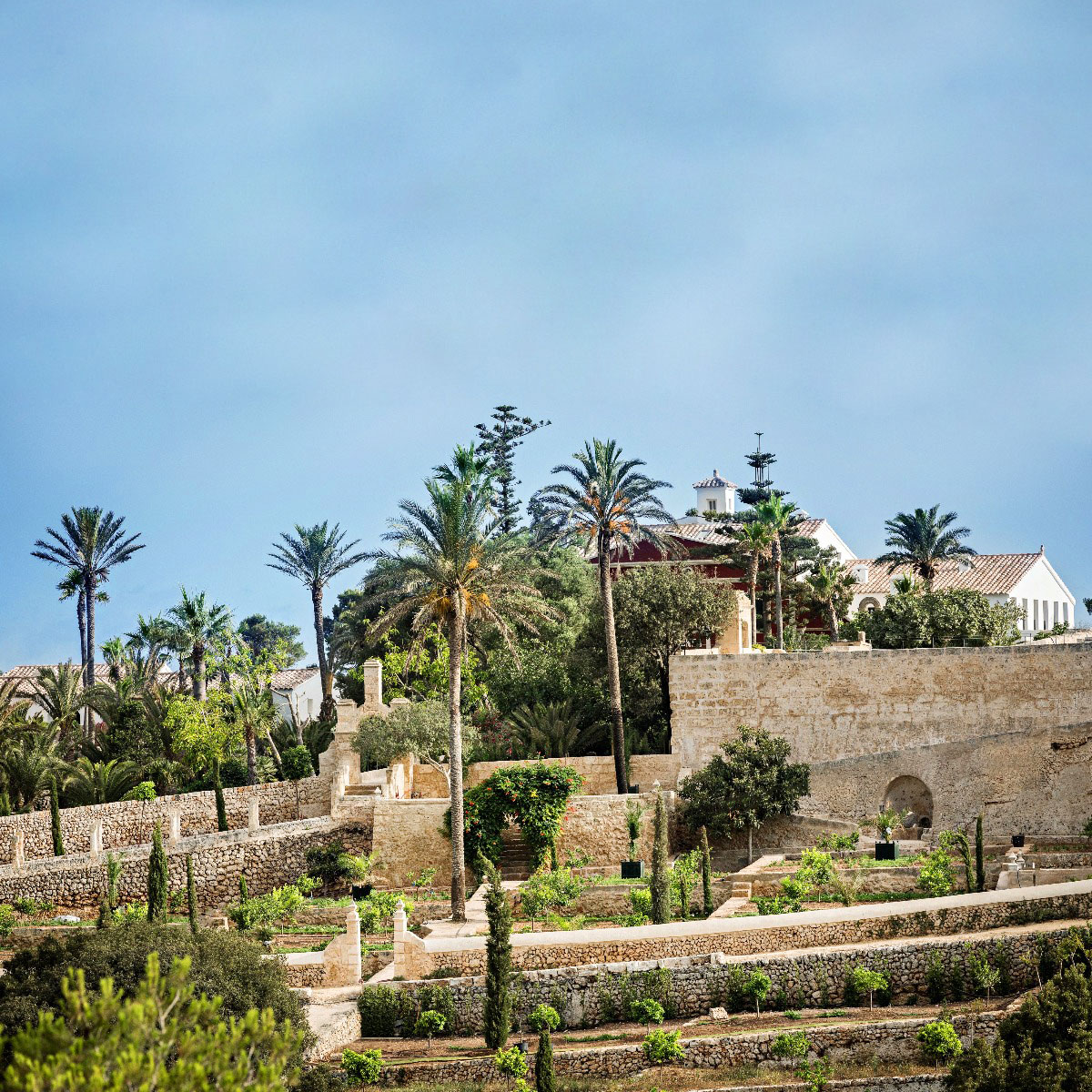 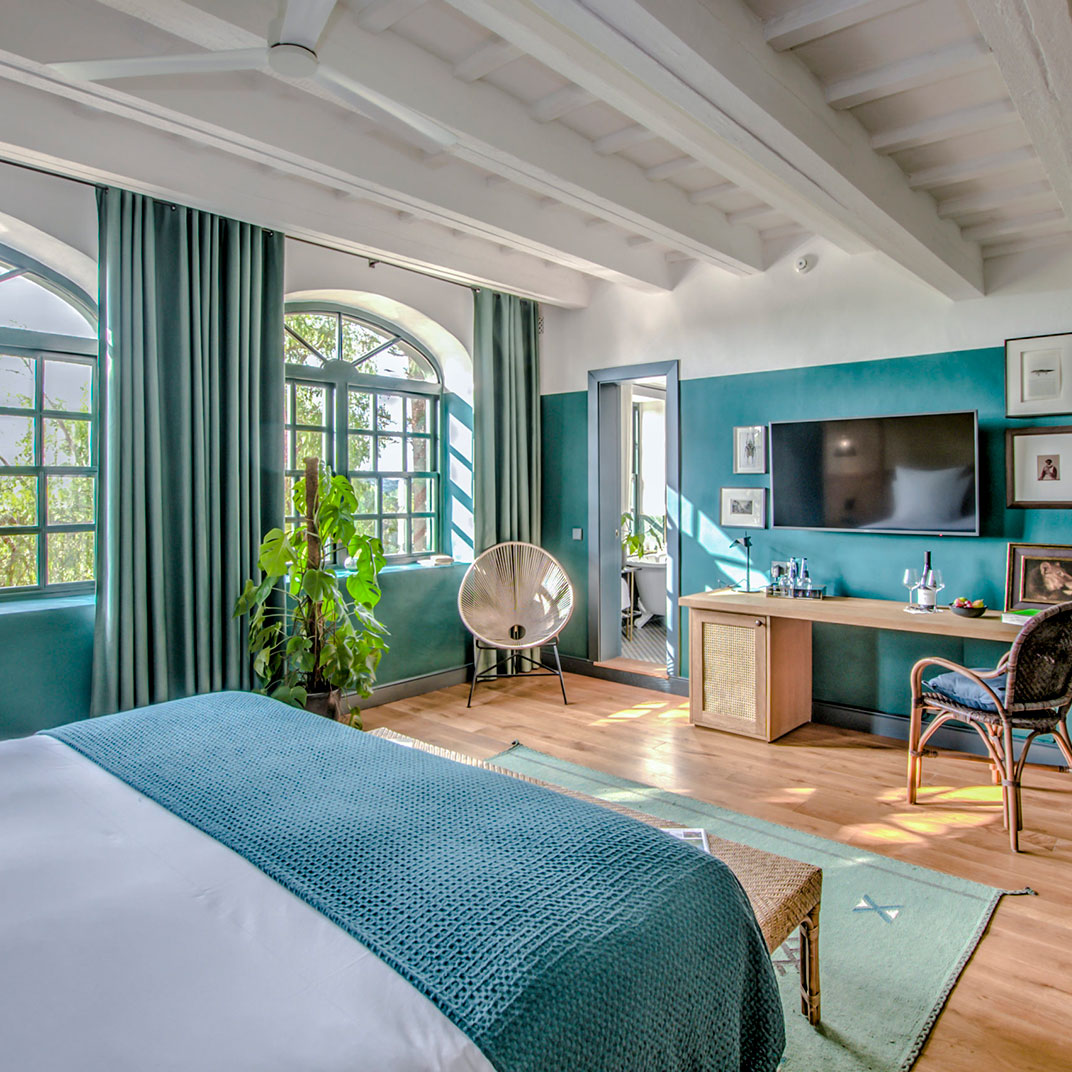 Even by the standards of this idyllic Balearic island, Fontenille Menorca is something special: a 250-acre estate whose gently rolling hills are dotted with palm trees, orange groves, figs, flowers, and gardens of every description. Presiding over all of it is a finca-style farmhouse, an 18th-century aristocratic residence, beautifully restored and renovated into a 21st-century luxury boutique hotel called Santa Ponsa. Its 21 rooms and suites span several buildings, from the main house to the barn and various outbuildings, whose architecture is a vibrant mix of Spanish and Moorish influences. Every one is a bit different, owing to the irregular floor plans of these converted structures, but they’re all handsomely styled.

Please note that Fontenille Menorca closes from the end of October 2021 to March 2022. 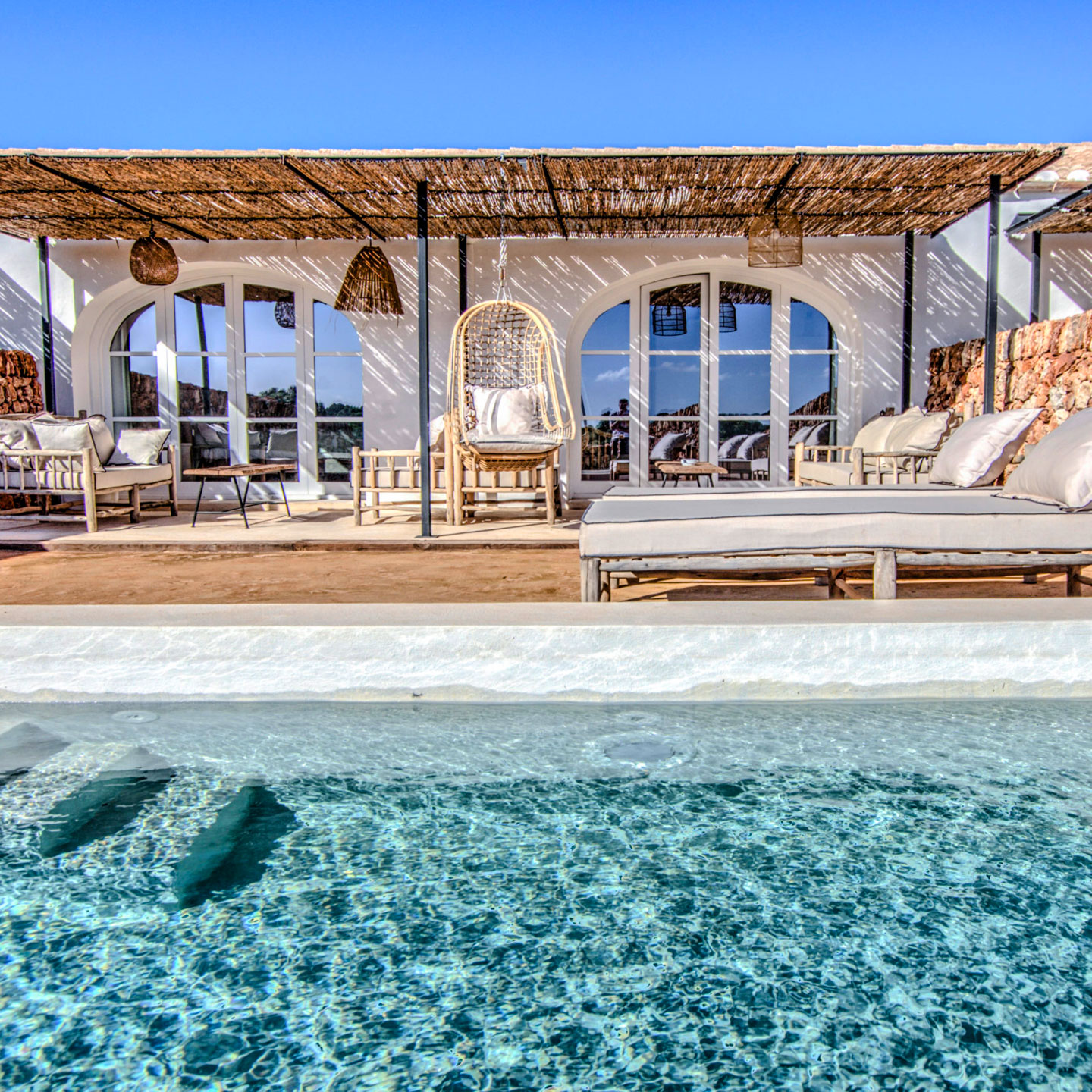 Sister to the nearby finca-style Santa Ponsa, and part of the same glorious Fontenille Menorca estate, Torre Vella is another farmhouse hotel, but with a twist; this one is built around an old fortified watchtower, set amid acre after acre of olive groves and medicinal herbs. It’s a slightly more bohemian vision than the more refined Santa Ponsa, but the difference is a matter of character, not quality — it’s got a personality all its own, but is no less comfortable, or less seductive, than its sister hotel. Rooms and suites occupy the main building as well as outbuildings including a barn and an old sheepfold, and while they differ in layout, all are stunningly decorated in a minimalist style with plenty of rustic, organic warmth. Most of them include terraces, some have private pools.

Please note that Fontenille Menorca closes from the end of October 2021 to March 2022. 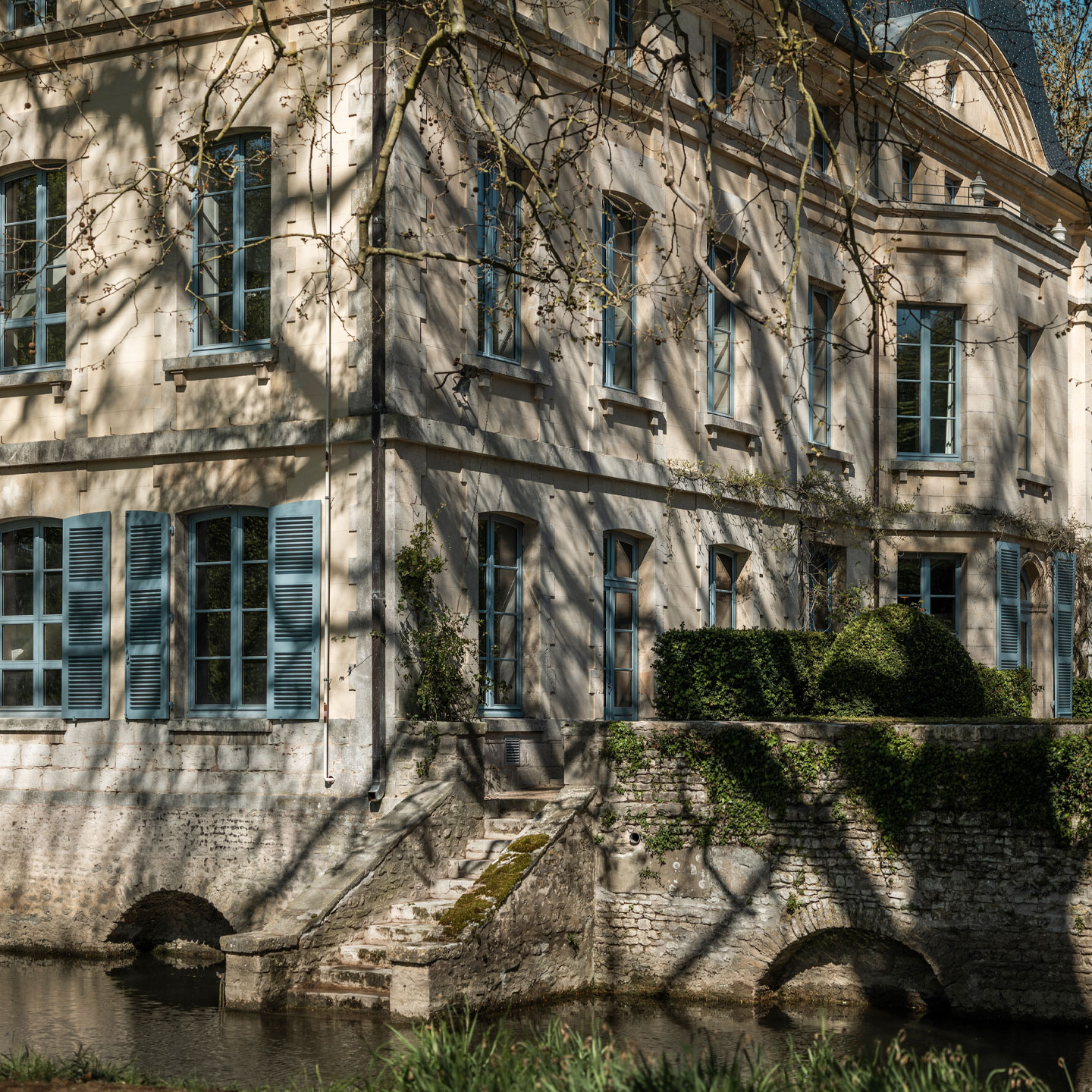 Just under an hour’s drive to the west of Paris, on an estate spanning both sides of the Eure river, is the Château de Primard, a stunningly well-preserved 18th-century Directoire-style house that was, until recently, a private home. And as of 2021, that’s no more — the magnificent Primard is now a 40-room luxury hotel complete with a destination-worthy restaurant and the first Susanne Kaufmann spa in France. It’s a member of the Domaines de Fontenille hotel group, whose Luberon hotel of the same name is a longtime Tablet favorite, seamlessly combining historical atmosphere with contemporary luxury.