Few industries have been impacted by COVID-19 like the hotel industry. As the virus spread, and confusion along with it, nobody was sure exactly what to do. We spoke with a handful of hotel owners and operators to find out how they handled what turned out to be an unprecedented summer.

One of the most fascinating things we learned in speaking to hotel managers for this piece was that many hotels were not built to close. City hotels especially are designed to welcome guests every hour of every day throughout the year, and were not equipped with front doors intended to be locked up for the long term. Even shutting down utilities like water and electricity came with a lot of questions. It’s an important bit of context to remember when reading about how these establishments were forced to confront the coronavirus in the early, uncertain weeks.

Today, as our collective corona nightmare drags on and our daily reality shifts from one new normal to another, you forget just how chaotic those first days of the pandemic felt. The moments before cases spiked and rumors said the disease might be like the flu, or when lockdowns began but we thought we might still have a typical summer to look forward to. We did, right? Because it’s easy to lose track of how we felt at the very beginning.

How long has it even been? Five months? Six?

“Seven, actually,” interjects Bruno Vergeynst, Managing Director of the The Line Hotel in L.A., before chuckling an “I don’t know,” as though he hasn’t been counting each agonizing day. As an industry, hotels have been hit unusually hard by the pandemic — in April, unemployment in the U.S. hotel sector reached 48.9 percent. By October, it had fallen to 30, as many cautiously reopened their doors, having had time to assess the risks and the guidelines, and put plans in place to keep guests safe.

When Tablet spoke to Mr. Vergeynst in October, his hotel had finally reopened after closing in March. As with everyone we spoke to, closing was a disorienting whirlwind of quick decisions, heartbreaking conversations, and impossible choices. “As soon as you close the door, you don’t know when you’ll reopen,” he remembers a colleague saying. It’s a reality that made those initial decisions all the more agonizing.

Americans began to realize the pandemic was a serious concern sometime in February or March — and yet there was little information and even less understanding of what was happening. To realize what hoteliers went through, you have to try to remember what that was like. Before social distancing and wearing masks were a shorthand for following the established rules. When no one knew if COVID-19 would last a month or a year. Before the new normal.

Talk to hoteliers and they’ll tell you that, of course, they wanted to weather the storm. They wanted to stay open, to welcome guests, to keep their people employed. “And then it kinda came quickly, right?” says Peter Twachtman, CEO of Lark Hotels, a chain of boutiques with properties in New England, New York, and California. As cases skyrocketed, many hotels realized closing might be more than a worst-case scenario — it was an imminent reality. Bookings plummeted overnight. Cancellations poured through the phone. Conclusive information on what was safe and what was dangerous was remarkably hard to come by.

In regular life, thriving businesses do not close out of nowhere. At Lark headquarters, the decision was made in a staggering 48-hour period. We asked if they had considered keeping some hotels open and closing others. “We talked about as many scenarios as we could think of,” remembers Twachtman. “And at the end of that time, the one thing we kept coming back to was we don’t know enough to make an informed decision to keep one open versus another… and so the best thing we can do, because we don’t know, is shut it all down.” It was an excruciating choice.

All around the country, similar choices were being made as virus cases spiked relentlessly. At Troutbeck, a small hotel in New York’s Hudson Valley, Guest Services Manager Joy Mulvey had just sent out the next week’s work schedule to her team. She had to call them the next day to take it back. The hotel was closing.

There’s nothing natural about a hotel turning away guests. City hotels, like the Wythe in Brooklyn and the C.O.Q. in Paris, never do it. It’s in their DNA to stay open 24/7, 365. But just weeks after celebrating the achievement of their restaurant’s three-star review in the New York Times, the Wythe was having a new door installed — one with a lock. 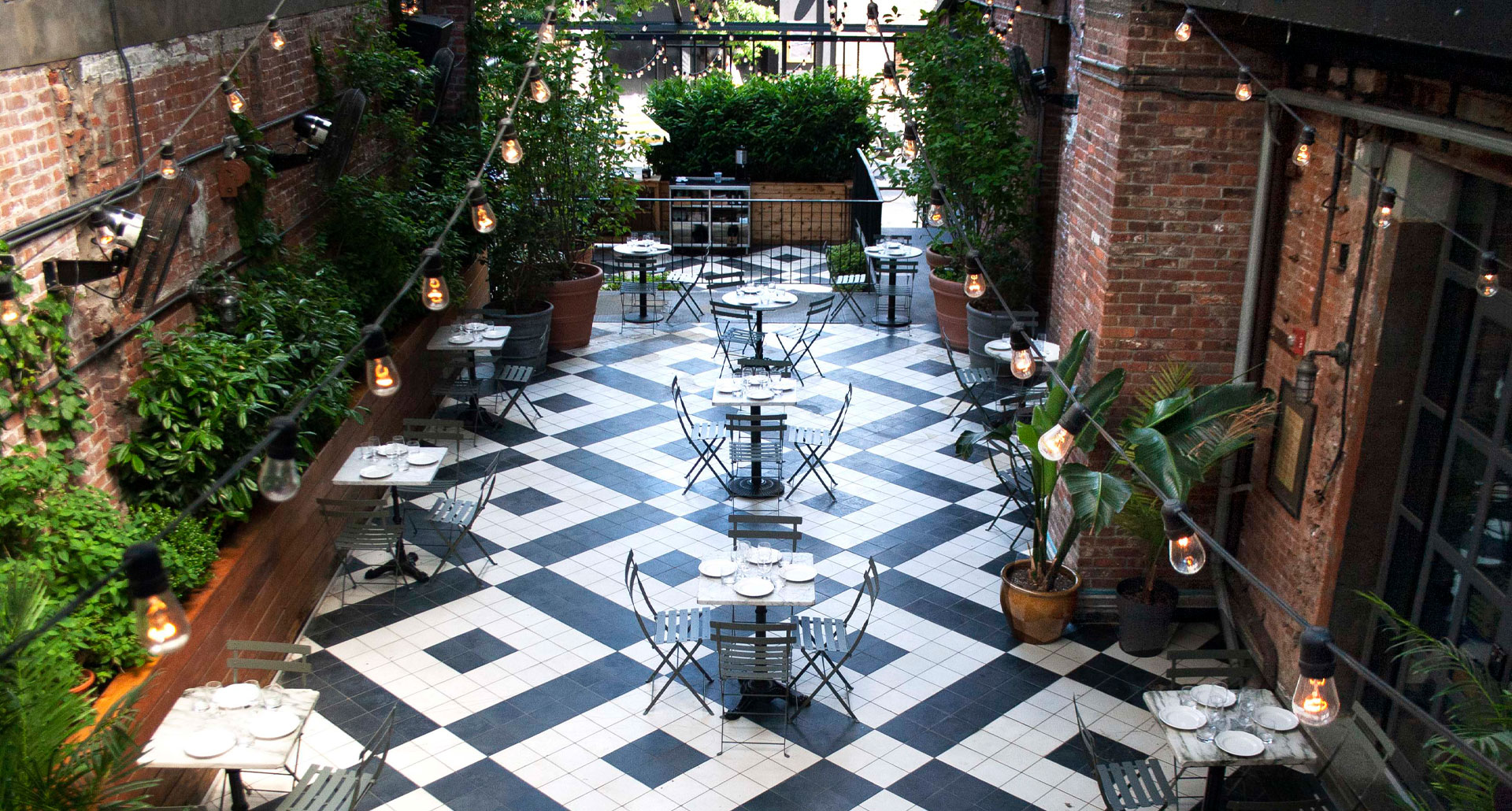 Mr. Vergeynst, too, felt the same uncertainty in the industry as he did as an employee at a New York hotel in September 2001. “I had this memory that the six weeks after 9/11, every Friday… there was a round of layoffs,” he tells Tablet. As cancellations climbed at the Line this past spring, he knew from experience that they had to have a plan ready.

Here’s where it helps to remember your own experience at the beginning of this crisis. When we all held onto the hope that the world would return to normal in a matter of — what? Weeks? A couple months? If you had a wedding invite for April, the first postponement may have set a date for June or July. The next for September. A little later, and it was into the next year — or to 2022. Hotels had to make the same adjustments with people’s livelihoods. As time crawled on, what were announced as calculated, impermanent layoffs or strategic furloughs became larger waves of permanent terminations. “There’s not enough understanding in the story of what that really meant for people,” says Mr. Twachtman. “It’s heart-wrenching.”

For everyone in the hotel industry — on either end — those phone calls were the lowest moments of the last seven months. Those lucky enough to keep their jobs found their duties drastically changed. Communication with vendors and unemployment offices — and, above all else, guests eager to cancel or postpone their stays — became the overwhelming tasks of the day. In a sign of the bizarreness at Troutbeck, a chef sat at the front desk taking cancellation calls.

Meanwhile, those who kept their jobs spent their time planning a return. At first, guidance for reopening was scarce. “Man, it was like the wild west,” sighs Mr. Twachtman, remembering the beginning of the process of trying to plot a safe return. “We were getting different info all over the place, all the time.” Rules and regulations varied in each state. Eventually, Lark decided to simply take the strictest regulations — mostly from Maine — and apply them to every property, no matter the location. In the case of the Wythe, which spent much of its closure as a haven for doctors and nurses working nearby, lessons were taken directly from the essential workers on the front line. “You have to treat every single person that you interact with as if they’re sick,” Mr. Lawerence remembers them saying. “And if you’re doing that, then you have the best chance of no one getting sick.”

As knowledge and data increased over how exactly COVID-19 spreads, hotels were able to more confidently implement measures to keep their staff and guests safe. That spread of knowledge meant — finally — a move to return. Slowly and gradually, hotels began to open up again, with many precautions and an outsized emphasis on outdoor space. We’ve dedicated our own Tablet Recovery Pledge to tell you exactly what hotels have done to prioritize health and safety. For now, suffice to say that they’ve spared no effort — to expand their outdoor dining areas, to create picnic spaces, to implement reservations for the now most sought-after activities (space by the pool, tennis courts, bike rentals) that used to be first come first serve. In return, they’ve been rewarded with a cautious return of their guests, albeit with a change in the usual patterns. Bookings are more last-minute. There’s a larger market for weekend staycations. Some hotels are even beginning to offer rooms just for the day — a nine-to-five accommodation aimed at anyone tired of working from home.

It doesn’t matter much to the hoteliers. “I have to tell you, the best feeling was when I was able to call people back and say hey — you start next week,” says Mr. Vergeynst. It’s a sentiment echoed across the industry. Things are not back to normal yet. That might take another seven months. A year. Two. The approach of winter brings an entirely new variable.

But for now, those who have reopened are glad to put more and more distance between today and those early days in March. And to deal with the happy, if frustrating, problems of how to do hospitality behind from a mask. “I walk past people smiling and realize they have no idea I’m smiling at them,” laughs Ms. Mulvey, “so that was obviously a strange thing to get used to.”

If you’re trying to sum up the last seven months in a sentence, that’s about as good as it gets.

Enjoy our special companion piece to this article about the C.O.Q. Hotel in Paris and their tremendous efforts during lockdown to house local healthcare workers in lieu of paying guests.