When Charles Mallory decided to buy the Four Columns Inn and bring it back to life in 2015, he knew the Vermont hotel was historic. He just didn’t know the extent of it. This place — one he’d driven by countless times — was home to what might be the first farm-to-table restaurant in America.

Where to start with the Four Columns Inn? We could start with all the celebrities who’ve come through over the decades, like Mick Jagger, Sting, and Michael Douglas. Or the luminaries who were regular guests, like economist John Kenneth Galbraith. Or we could talk turnip. Because when you talk about Four Columns, you’re talking about two things: the beginning of the farm-to-table movement in America, but also Vermont — the very roots of Vermont, in a very literal way.

The Gilfeather turnip is quintessential Vermont, and Ralph Capalupo, the chef of the Four Columns’ revived restaurant, Artisan, has big plans for it, plans you might call schemes when you hear the delight with which he fantasizes about the endless turnip possibilities — turnip roast, turnip puree, turnip kimchi, turnip miso. Capalupo’s cherished Gilfeathers come from a nearby farm that boasts the original strain, a celebrated local that beat out trendy posers like kale to become Vermont’s official state vegetable.

But let’s reel it back in for a second, because it’s cheap to namedrop the Gilfeather just to get your attention. Back to the Jaggers and the Galbraiths. The reason they flocked to Four Columns is the same reason the inn flourished in the first place, and a large part of the reason locals yearned for its return. That reason is the restaurant, quite possibly the first farm-to-table restaurant in the United States.

When Four Columns first opened in 1965, the concept of farm-to-table in America — in essence, the celebration of the fresh, the organic, and the locally sourced — was still unknown, not a trend but an innovation. Read about the history and you won’t often hear the Four Columns mentioned. Charles Mallory thinks that’s less a function of its importance in the story, and more a symptom of circumstances. “The one critical piece of this puzzle,” he says, “is that René Chardain died” in the early 1980s. The original owner of Four Columns, René Chardain hasn’t been around to claim credit for his contributions to a movement that’s now a buzzword.

If you do read about the beginning of the movement, you’ll soon come across the name Alice Waters, the founder of Chez Panisse in Berkley, California. Her story has plenty in common with Chardain’s. Waters attributed her farm-to-table experiment to her time in France, where “eating a fresh baguette and apricot jam was a revelation” in comparison to the “land of frozen food” that was the United States. It seems that for Waters, farm-to-table was a deliberate reaction against the processed-food phenomenon sweeping post-war America, a quintessential countercultural reaction to an over-commercialized society. Meanwhile, for René and Pierrette Chardain, who opened up the Four Columns a few years before Waters opened her own restaurant, farm-to-table wasn’t necessarily a revelation at all. But it was French.

“It was what he knew,” explains Mallory, referring to Chardain’s childhood in Alsace. “Having a vegetable garden and having a trout pond and raising chickens was second nature.” Farm-to-table, he explains, just “was not a big leap for him.” 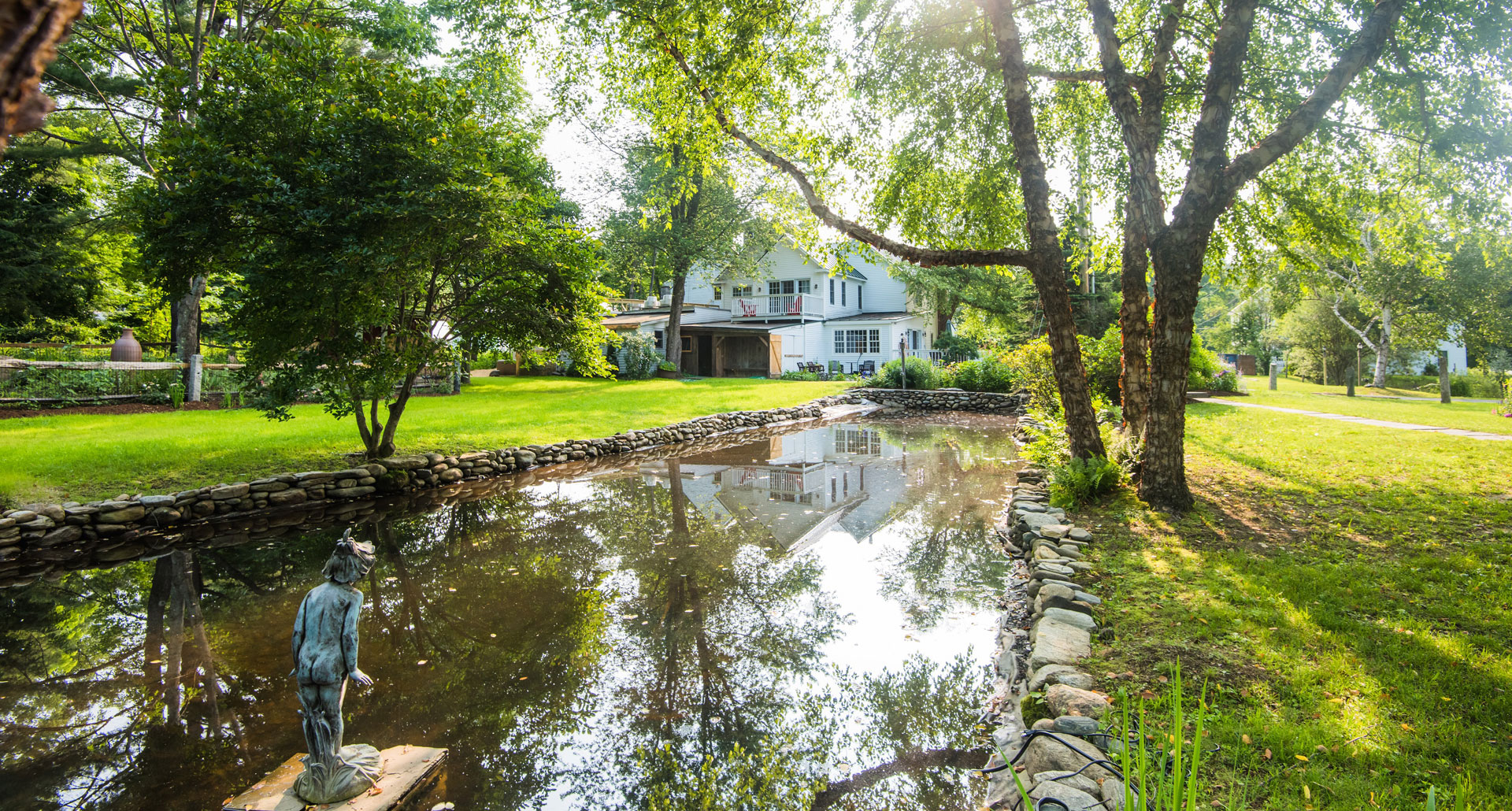 While Waters would scour her California setting for local farms to supply her restaurant, the Chardains sourced most of their ingredients from right on the property. Talk to the current chef at the inn, Ralph Capalupo, and he gives a clue to their success. It’s “kind of like an extreme temperate zone” in the area around the Four Columns, he explains. “And things love to grow. Not to mention, the West River is right there and the soil is super fertile.”

Forget farm-to-table, Four Columns was in large part fine-dining property-to-table at a time when that just wasn’t done in this country. The Four Columns turned it into a scene, all in the little town of Newfane, itself beginning to blossom as destination for the Harvard set looking for second homes. In a town with a painfully picturesque village green, a steepled church, and an eye-popping if surprising tradition of Greek Revival architecture (all conveniently near the newly built interstate), they found it.

It didn’t hurt that down the road, there were simple dishes set on white tablecloths, made with the freshest ingredients in the world. 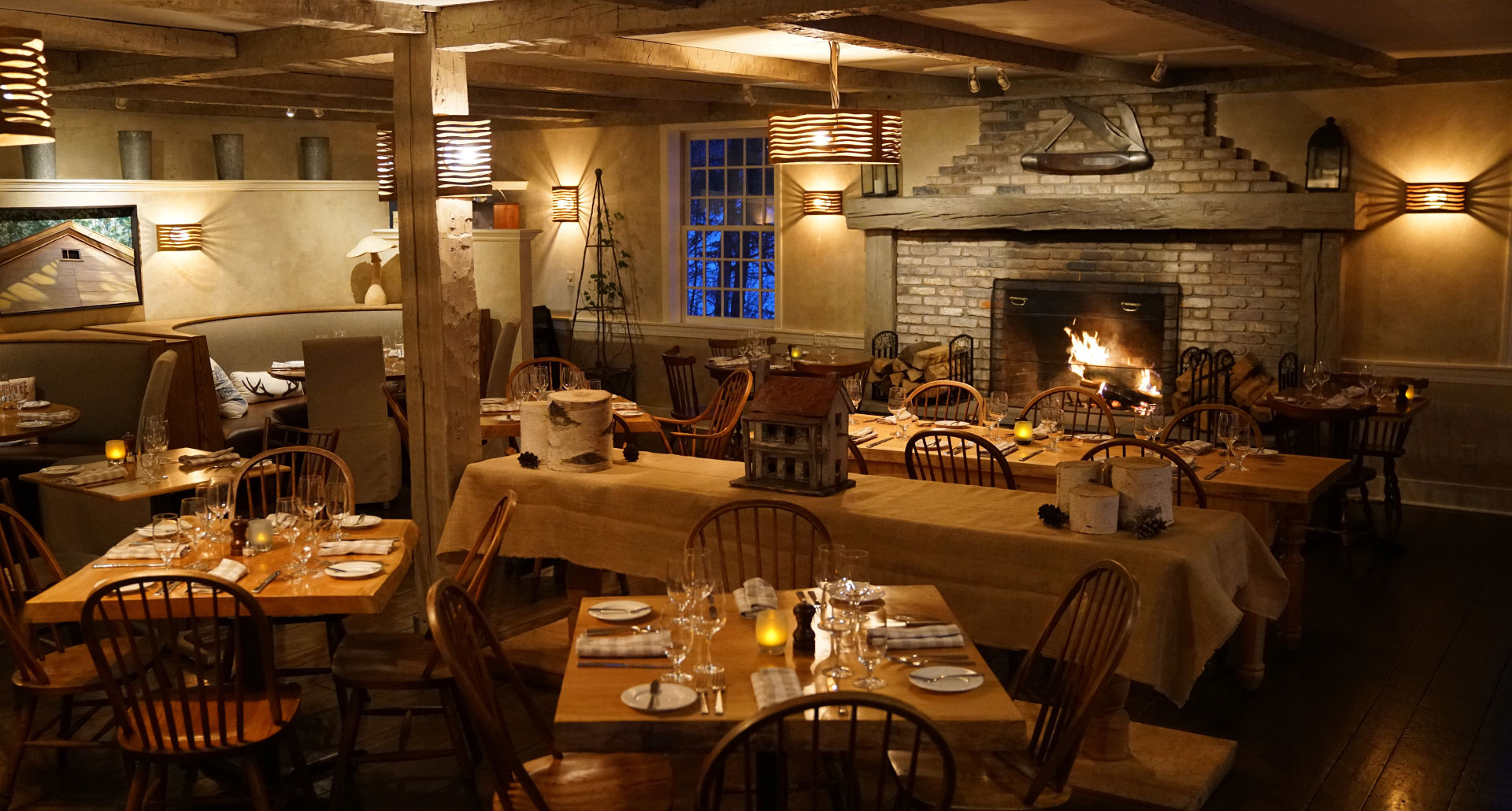 Artisan Restaurant: Back to Basics

The Chardains held onto the inn and restaurant until 1981, and a series of other owners kept it going until it finally petered out in 2013. “It had its moment where it was unique and special,” Mallory told Tablet, eulogizing the original inn. “As time passed, there were other fine dining restaurants that were closer to home or in the city. Now of course there’s just a lot more competition.”

To bring the Four Columns back to its glory days when he bought the property in 2015, Mallory began by aging it down. Where the original restaurant had been traditional fine-dining, today that felt stuffy. Mallory and his team yanked out the carpeting to reveal the gorgeous hardwood floors, added some color, and created space for a bar. There, they built a bay window to look out over the garden and into the acres and acres of grounds.

Then — the food itself. The previous chef, Erin Bevan, began by developing intricate relationships with nearby farms, pouring over their seed catalogues to plan her menus based on future harvest. Today, a new chef presides over the kitchen — Ralph Capalupo — and the passion with which he talks about local food leaves no doubt that Artisan’s mission is the same as the originals who pioneered farm-to-table at Four Columns. They make use of eggs from their own ducks and chickens, take herbs from their own garden, and have access to wild pine nuts and maple syrup tapped right out of their own trees. Still, running a restaurant the way the Chardains did just isn’t feasible anymore. Modern expectations for a bevy of choices, along with regulations about who can process game, make it too difficult.

Instead, if your ethos is farm-to-table, you have to rely as much as you can on local farmers. And even though Capalupo says that running a restaurant the way the old Four Columns did would be the “extent of any dream [he’s] ever had,” hear him talk about his relationships with the local community and you expect he’d miss it if they ever did go full Chardain. “I go by what’s good and what’s going to help out our farmers,” he says, on choosing ingredients. He’s in constant contact with them to see what’s available, something that has been an intricate part of his career as a chef at every stop. It takes a commitment to cook that way, he stresses. “You have to live it, and love food, and love the area that you’re in.”

That part’s hardly a challenge. Four Columns is Vermont at the height of its charm, everything you imagine when you think of this place. “My wife said it the other day,” says Capalupo, “it’s like you work at a postcard.” 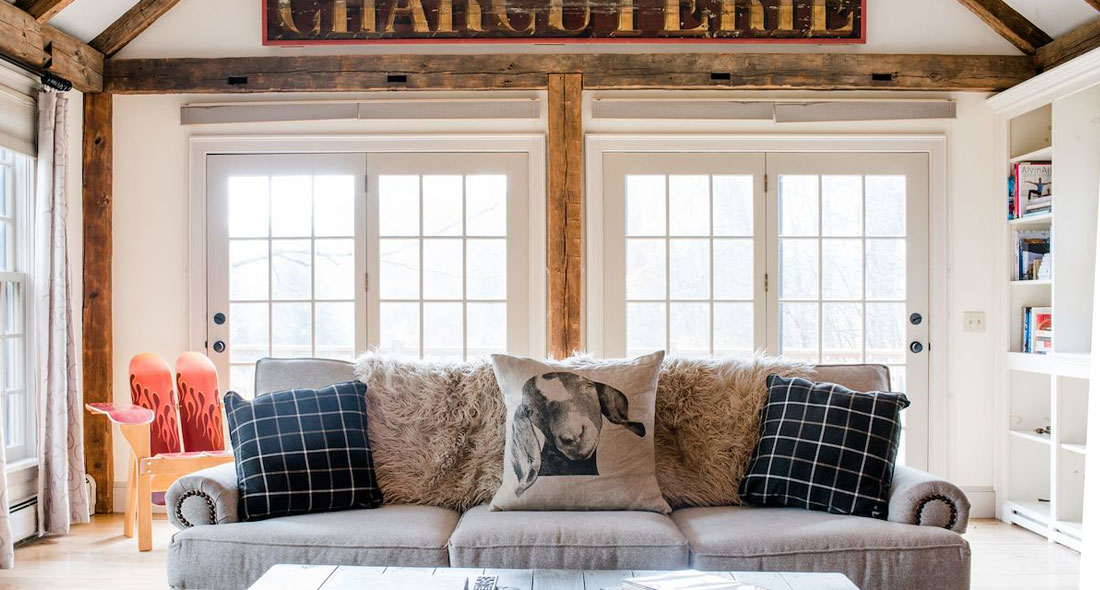 If you don’t know quite what to expect on the inside of an inn like this, we understand. It’s more in the style of a Southern plantation manor than a typical New England colonial, and while there’s a good tale behind that, it’s just the usual “former revolutionary war general trying to convince his southern belle to move in with him” story. For now, suffice to say that the fifteen rooms have been as thoroughly renovated as the restaurant. Fresh and contemporary, they’re full of antiques and modern pieces both, and stocked with the luxuries you expect from a high end boutique.

And although we think the history of the Four Columns transcends the current pandemic moment, it’s pragmatic to mention that if there’s any place particularly well suited to deal with it right now, it’s this one. Outdoor dining is a delight here, and the acres of grounds feature lovely spaces: ponds, gardens, a stream, and all the hiking, kayaking, and flyfishing of Vermont just beyond. In the winter, the ski season begins, and we dare to dream that the inn will be able to open further than its currently mandated fifty percent capacity.

But for now, while the weather allows, it’s somewhat due to the pandemic-induced focus on the outdoors that “a lot of people are discovering how unbelievable the space is,” says Capalupo. A small consolation as he waits for the world to return to normal, and for the ability to phase out the take-out boxes that have become the new normal. A restaurant like this calls out for a plate. 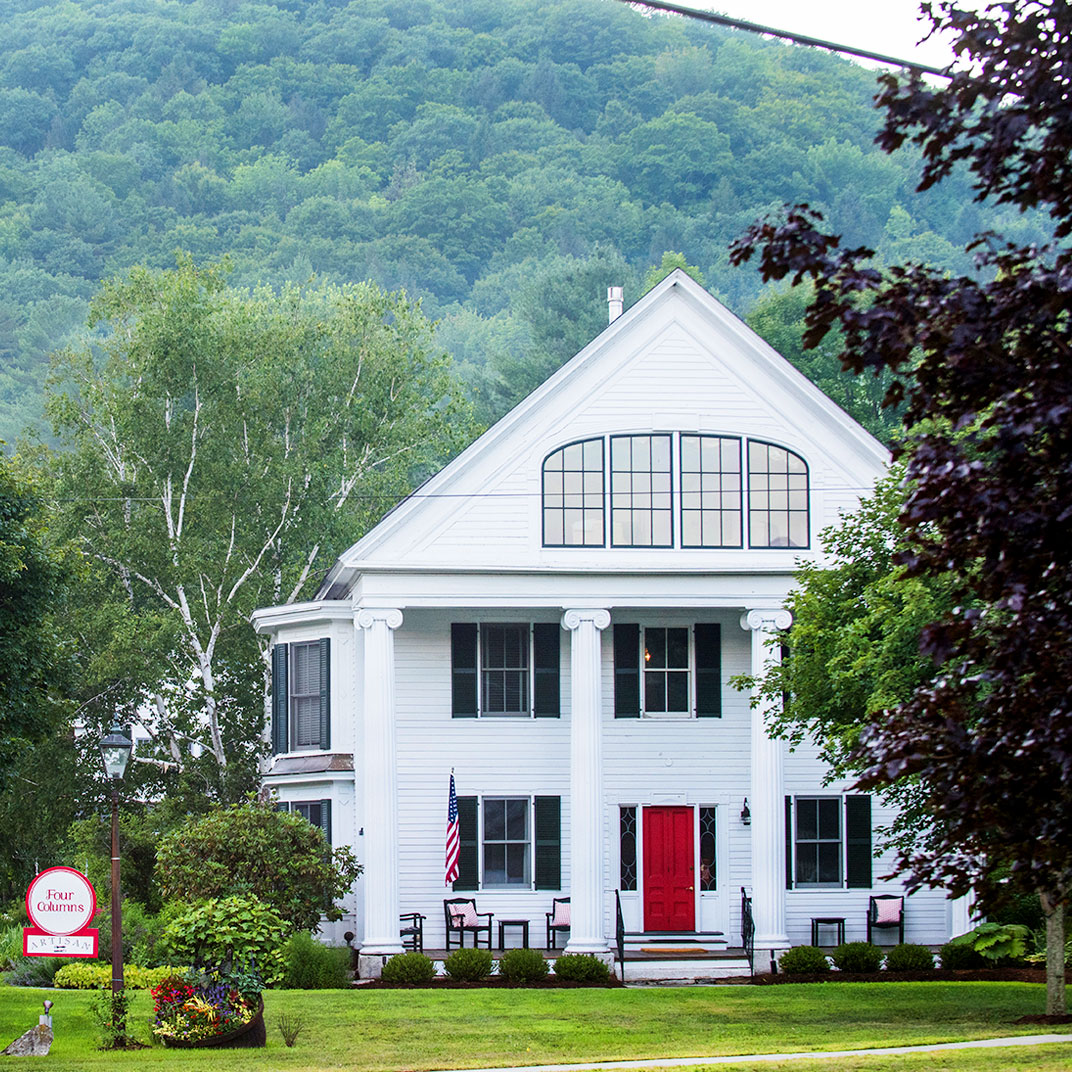 When it’s time again to travel, if you’re considering a trip to Vermont, be sure to consider staying at the Four Columns Inn & Restaurant, located in historic Newfane.