Holiday magazine reached its zenith during the Golden Age of travel and publishing. But like everything born out of nostalgia, the “golden age” wasn’t quite as golden as it seemed.

If you haven’t heard of Holiday, you’re hardly alone. But in the world of travel magazines, this is the historic gold standard. A high-falutin, irresistibly designed classic, it ran from 1946 to 1977. By its peak in 1962, Holiday sold nearly a million copies a year. It claimed work by mononyms like Kerouac, Capote, and Hemingway; Faulkner, Bowles, and Steinbeck. An article in Holiday about New York, by E.B. White, is now sold as its own hardcover. Those gargantuan bylines are not anomalies.

At the time of its launch, air travel was only beginning to take off. In the modern sense, so was travel itself. In an era when you needed an agency to so much as hear about a new destination, a thing like Holiday was the only way to have travel at your fingertips. By all indications, it was worthy of the responsibility. “There was nothing similar before in magazine form,” says Pamela Fiori, who started her career there as a fact checker. Fast forward to 2020, and you’re even harder pressed to find a comparison. Holiday came up in the “golden age” of travel, in the “golden age” of magazine publishing. Today, there’s no chance a travel magazine could have the same “size, breadth or depth. And I should know,” Fiori adds. In later years, she was editor-in-chief of Travel and Leisure and Town & Country.

Having secured the March 1955 issue through an online auction, I cracked it open on a day I was supposed to board a flight to Big Sur. Restricted from traveling in my own time because of COVID-19, I instead followed my enthusiastic and verbose guides around the world:

I wish the newfangled contraption many more successes, and turn the page.

As delightful as it was to learn bout “Jolly Cholly” Grimm, I didn’t purchase this issue for its story on baseball. I sent out specifically for Holiday, March 1955, for its piece by Arthur Miller: “A Boy Grew in Brooklyn.”

It was just seven pages, a remembrance of the already long-gone Brooklyn neighborhood in which Miller grew up. Having already traveled to 1955, I now accompanied Miller through a wormhole to his childhood in Brooklyn before and during the Great Depression. I live in Brooklyn. And I’ll tell you, you enter a new dimension entirely when you read the nostalgia of a man for your city-that-once-was, when he himself is writing 70 years in the past.

“It was a village, and the people died like the elms did, and I do not know those who live in their houses now. I go back there now and then, but whether it is I that am no longer young or the people who have changed, I know only that things are alien to me there and I am as strange to the place as if I had never known it.

The cars, for one thing, jam bumper to bumper along the curbs on streets where there was so much clear space we could have bumping matches with our first jalopies, and ride backwards and forwards and up on the sidewalks and never find an obstruction anywhere. And people seem to move in and out more often than they did, and there are many who have lived there five or six years now and the people next door still don’t know what they do for a living, or anything more than their names.

The drugstore has a chromium front now and fluorescent lighting, and young Mr. Dozik is a gray-haired man. A lot of picture windows are being put in to get a better view of the wall of the next house a driveway’s width away. And when anyone looks out the picture window all the people next door are there watching television anyway.”

I tried my best to work out a moral as I read. Something about memory, and the memory of travels, and how the memories are the only thing you get when you get away, anyway, and how we still have those no matter how long we’re stuck at home. But then I flipped the page and an advertisement screamed at me to rent a Volkswagen “for a more pleasurable trip in Europe.” And I lost the thought.

Speaking to Vanity Fair, another admirer of the old Holiday summed up the production this way: the magazine “wasn’t just travel — it was culture.” It’s true. The Garroway profile has nothing to do with Manhattan, the Parliament piece has little to do with travel to Britain, and the same can certainly be said of the features on the Du Pont family, cocktail dresses, and the screed lamenting the (already) “obsolescent art” of “civilized, noncontroversial” conversation by one Clifton Fadiman. At its best, Holiday was a more expansive way to think about travel and travel writing — as a prism for looking around the world and becoming a citizen of it — more than merely a how-to guide for its attractions.

Everything I had read about the magazine lauded the publication as one of America’s greatest, best-written periodicals: not just a travel magazine, but literature. I don’t dispute it. But if it’s literature, it’s the white male literary canon, and it undoubtedly suffers from its lack of diversity. In many places, I was surprised by how well the pieces aged. But for every gem by an Arthur Miller, you’ll also find a section, like I did in the feature piece on Central America, with whole paragraphs of generalizations about the race of people that provide you a stern slap in the face for reflecting fondly on the thinking du jour of the ‘50s. The same goes for the piece I read on Charleston, where my guide — Pulitzer-winner Shirley Ann Grau, not known in her career for whitewashing racial realities — still made all too much of the lost “grandeur of this coast.” 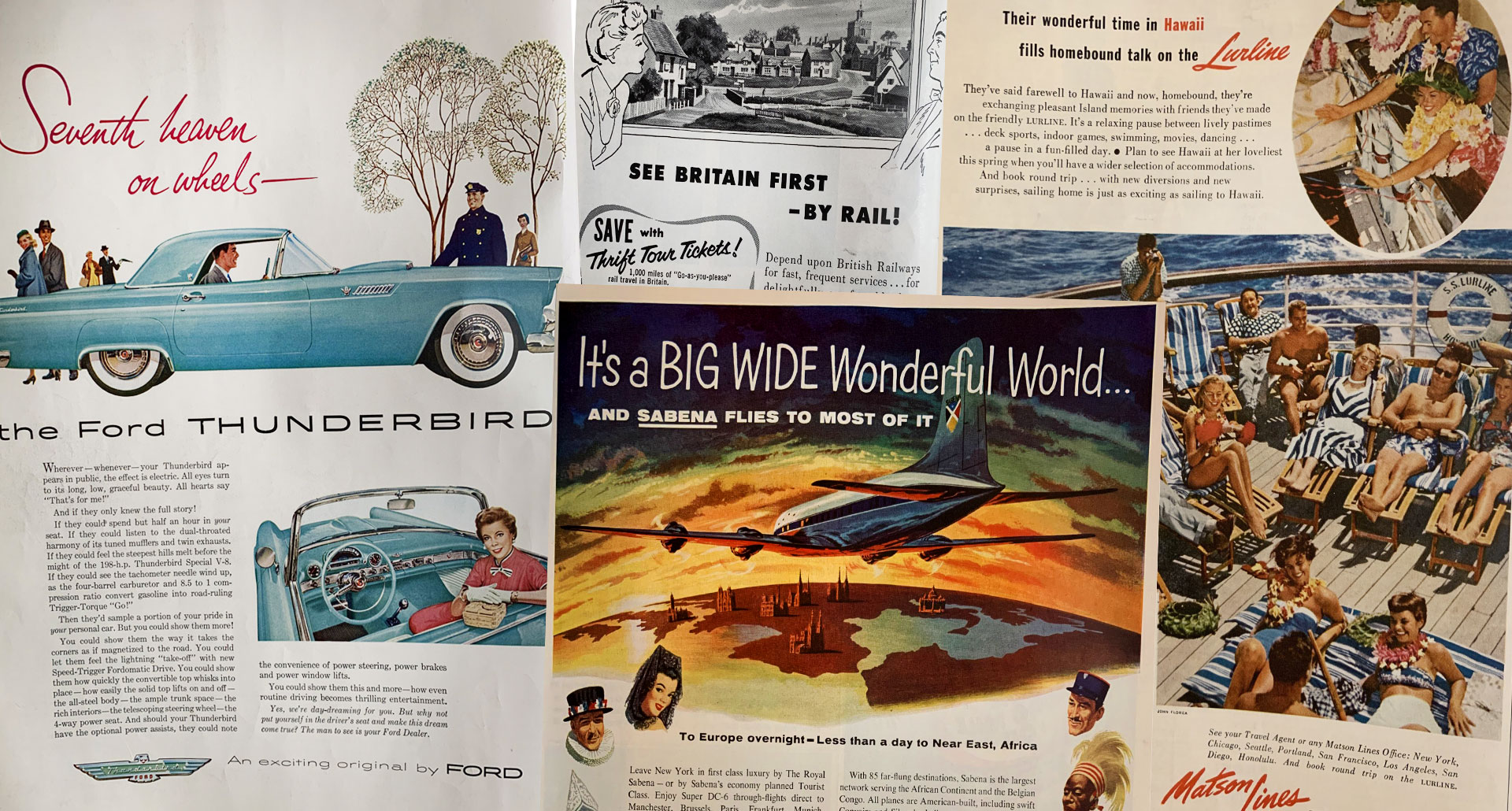 Another anachronism for the modern traveler, albeit a much brighter one: everything between the articles. If the magazine doesn’t confine itself specifically to travel, no one told the advertisements. Take, for instance, ad after ad for specific airlines, advertising not just the quality of the experience but the hardware that makes it possible. Sabena, Trans-canada, Swiss Air, all flaunting things like their “Rolls-Royce propeller-turbine engines” or — even more dated — “relaxation and comfort.” When’s the last time you asked who made the engine? Or picked an airline based on flight speed? How often are you able to prioritize comfort above all else?

Then again, what else were they going to advertise? By one account, air travel was five times as expensive in the “golden age” — and five times more fatal. And if you did survive the neck-snapping turbulence, you could only hope the glass divider that separated first class from economy did, too. And that’s all before you consider how drunk everyone was in the absence of anything electronic to occupy their time. The plane was less full, though.

This was the dawn of tourism as we know it today. Air travel only began to become widespread for Americans after World War II. Look at all the magazine ads for specific places in the collages below. Whereas you and I might consider jetting off somewhere new as adventure, a chance to leave our world and experience something new, it makes sense that — in 1955 — the pubescent travel business (and tourism boards from Washington State to Ontario) coaxed cautious readers with promises of nothing but leisure and fun. It wasn’t an adventure, it was a vacation. It wasn’t intrepid and enlightening, it was safe and relatable. 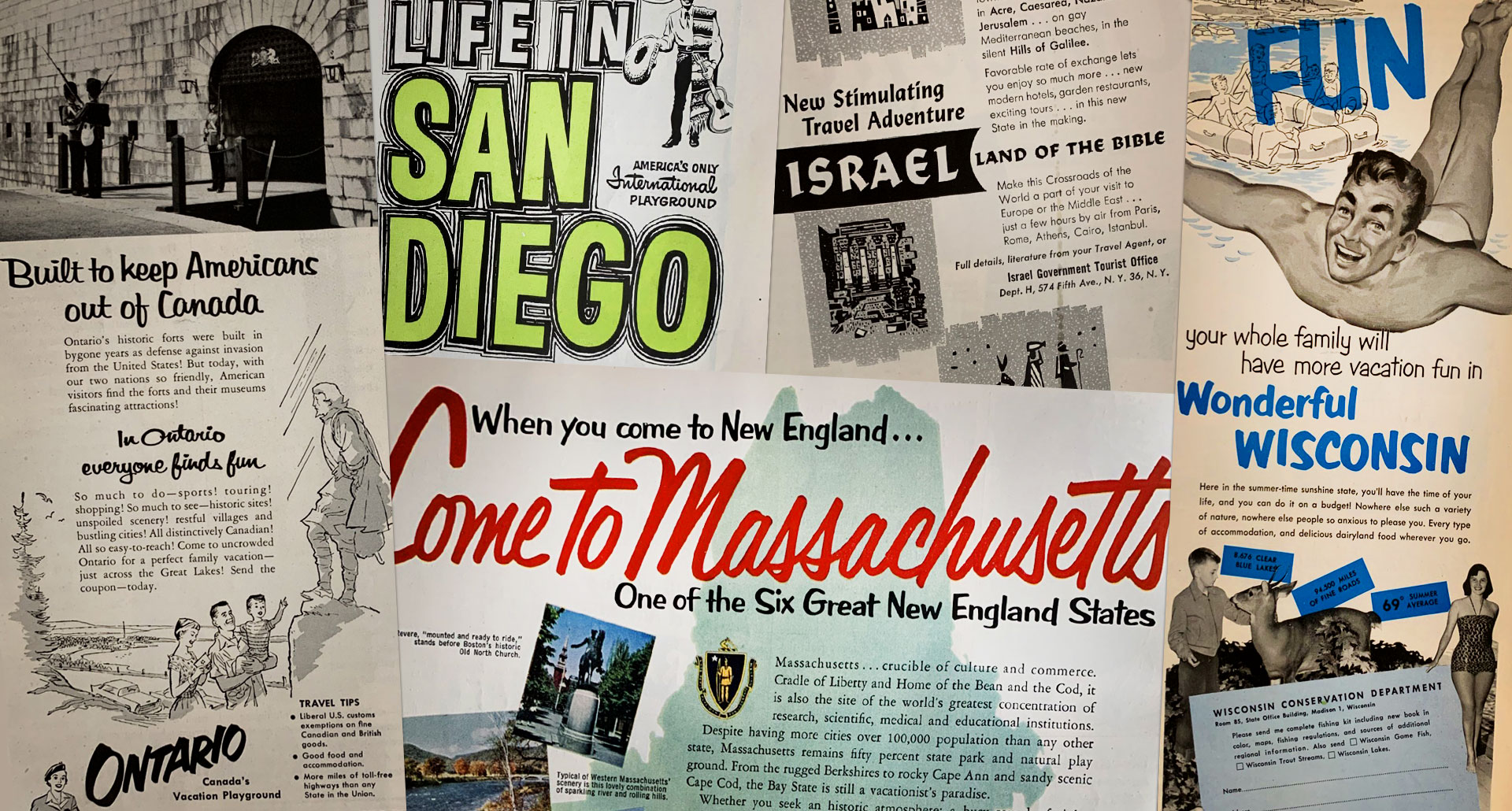 We’ve come a long way. And when we’re out of the quarantine days for good, we’ll want some of the long-lost legroom back — but without the danger and discrimination. We’ll want a chance to see travel again as a means of deep reflection — not just a comfortable escape we can take for granted. We’ll want to see travel in the way Fiori saw Holiday: as a way to “to tell a comprehensive story about a place or a country…” Of a borough. Of a childhood. We’ll want to take the gold from the golden age of travel — and leave the rest behind.

All in all, when I closed the magazine and went back to quarantine, I thought that was a worthy trip to 1955. (I’d still rather be in Big Sur.)

If you’re interested in reading Holiday, you can find old editions or selected articles online. Additionally, a new version of Holiday relaunched in 2014: a bi-annual publication based in Paris that publishes in English.