Once upon a time, the cave dwellings of Cappadocia were hidden. Not anymore. The ancient residences have been restored by hoteliers who believe the best way to enjoy the odd geology of the region is from within it.

Thousands of years ago, an ancient civilization started building a massive network of caves in a region of Turkey called Cappadocia. These underground cities were sprawling, ingenious spaces that accommodated entire societies: livestock, families, industry, and houses of worship. Through the millennia, communities continued to live in these caves en masse, right up until 1952, when the government cited structural dangers and set about evacuating the residents.

For fifty years, the caves remained largely abandoned. Then, in 2002, Cappadocia unveiled its first luxury hotel. It was stylish. It was elegant. It was in a cave.

Today, the Cappadocia region is just as well known for its cave hotels as it is for the spectacular landscape and unusual geology that made cave dwelling possible in the first place. The softness of the region’s volcanic rock allowed it to contort over the ages into the fantastical shapes and eroded “fairy chimneys” that now attract droves of onlookers. That same malleability allowed humans to dig down deep inside and carve out the subterranean suburbs that have become, centuries later, home to some of the world’s most extraordinary boutique hotels.

What about those structural dangers, though?

How do you build a modern hotel room in a cave? How do you make it safe, comfortable, and attractive? The answer: cave hotels aren’t just historical, but painstakingly retrofitted for the modern era — and immensely picturesque. They’d have to be. Words alone could hardly lure so many to try an architectural style most associated with the neanderthal.

Excavating a diamond from the rough

Our selection for Cappadocia features a wide range of cave hotels. And despite the apparent limitations of the form, there’s no such thing as a cookie-cutter cave. The Museum Hotel flaunts its collection of antiques, Hezen opts for an eclectic, contemporary design, and Argos offers such lauded public spaces as a stone concert hall, fashioned from what was once a chapel, 2,000 years ago.

You have choices here, nearly as many as in any city. But as diverse as they are in style, it isn’t an easy process to turn an evacuated, dilapidated cave into the stuff of luxury boutique legend.

“The whole area is a protected site,” explains Tolga Akarcali, a managing partner at Taskonaklar Hotel, which makes for a certain timidity in the process. After a hotelier applies for permission to renovate, a government council returns several recommendations for restoring the site, based primarily on how it may have looked in the past. Stonemasons, architects, and engineers then consult on the structural integrity of the renovations, and after they’re finally complete, the council might arrive on-site to to check the work.

If necessary, they might then direct further changes. Even something as innocuous as the widening of a door or window is subject to government approval.

It’s an arduous process. Take Taskonaklar Hotel. Opening in 2006 with only six rooms, they’ve slowly built up their property to 25 — over some fifteen years.

But the meticulousness is what keeps the look of Cappadocia consistent, both throughout the wide swath of contemporary cave dwellings and with the historical memory, a memory infused in all new construction. Compare that philosophy to some of the more thoughtless, unregulated building in a place like Tulum, and you start to appreciate the care taken here to keep the changes level. 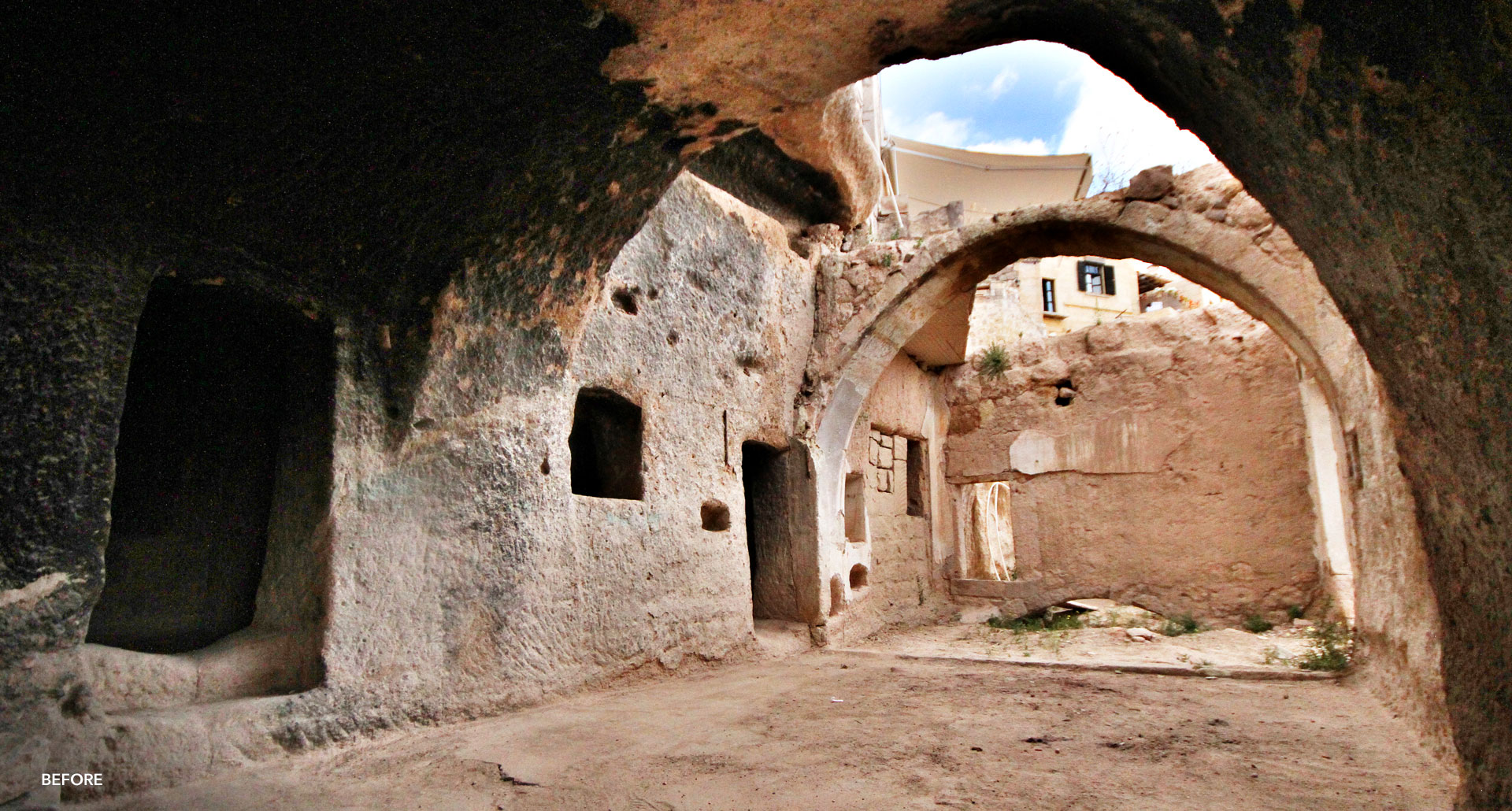 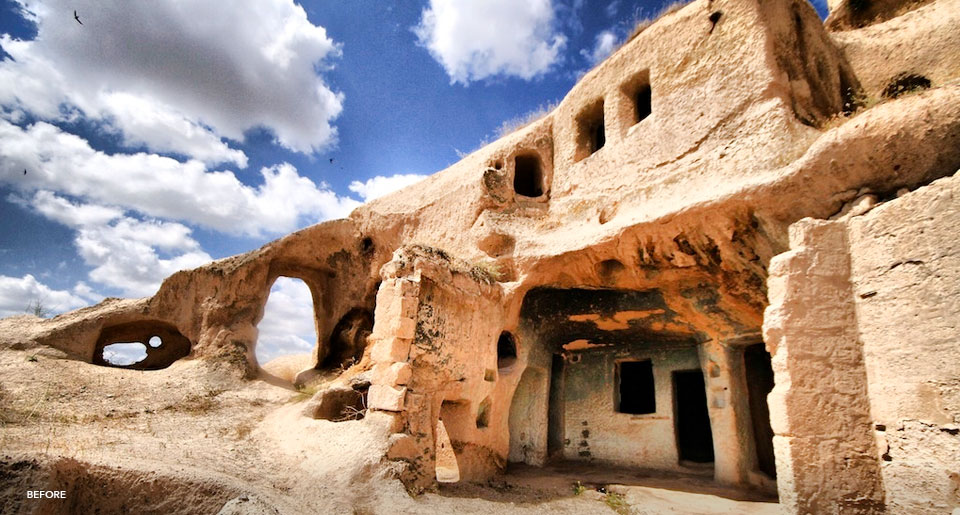 Before you can really appreciate the effort it took to bring Cappadocia’s caves into the 21st century, you have to understand: they’ve come a long way.

Born out of necessity and convenience, the caves are the stone embodiment of form following function. In a landscape tortured by its location, in the crosshairs of every one of the region’s passing empires — from the Hittites to the Romans to the Ottomans — as early as the fourth century that function was as a place to hide. Early Christians, fleeing their enemies, carved their way into the rock for shelter from invaders, creating vast networks of self sufficient, underground cave cities to retreat to in times of danger. Derinkuyu is the most famous of the archeological sites, an improbably vast network of dug-outs with room for 20,000.

But even outside the massive, celebrated underground networks, for thousands of years caves served everyday purposes much more mundane. In Cappadocian towns like Otrahisar, Nevsehir, and Urgup, they were homes and storehouses, barns and churches. That long tradition largely declined in 1952, when the government cited “dangerous structural conditions,” deemed many of the caves uninhabitable, and evacuated residents.

If the new era left the caves strangely empty, it was something of an inevitability that they would come to flourish again. For years, as the New York Times put it upon the region’s trendy reemergence, Cappadocia had mostly “attracted backpackers and archaeology-minded tourists.” But by the late 1990s, today’s Museum Hotel was restoring the ruins of an area in Nevsehir, on its way to creating what it proudly calls the first luxury hotel in Cappadocia.

In 2002, the Minister for Tourism cut the ribbon. 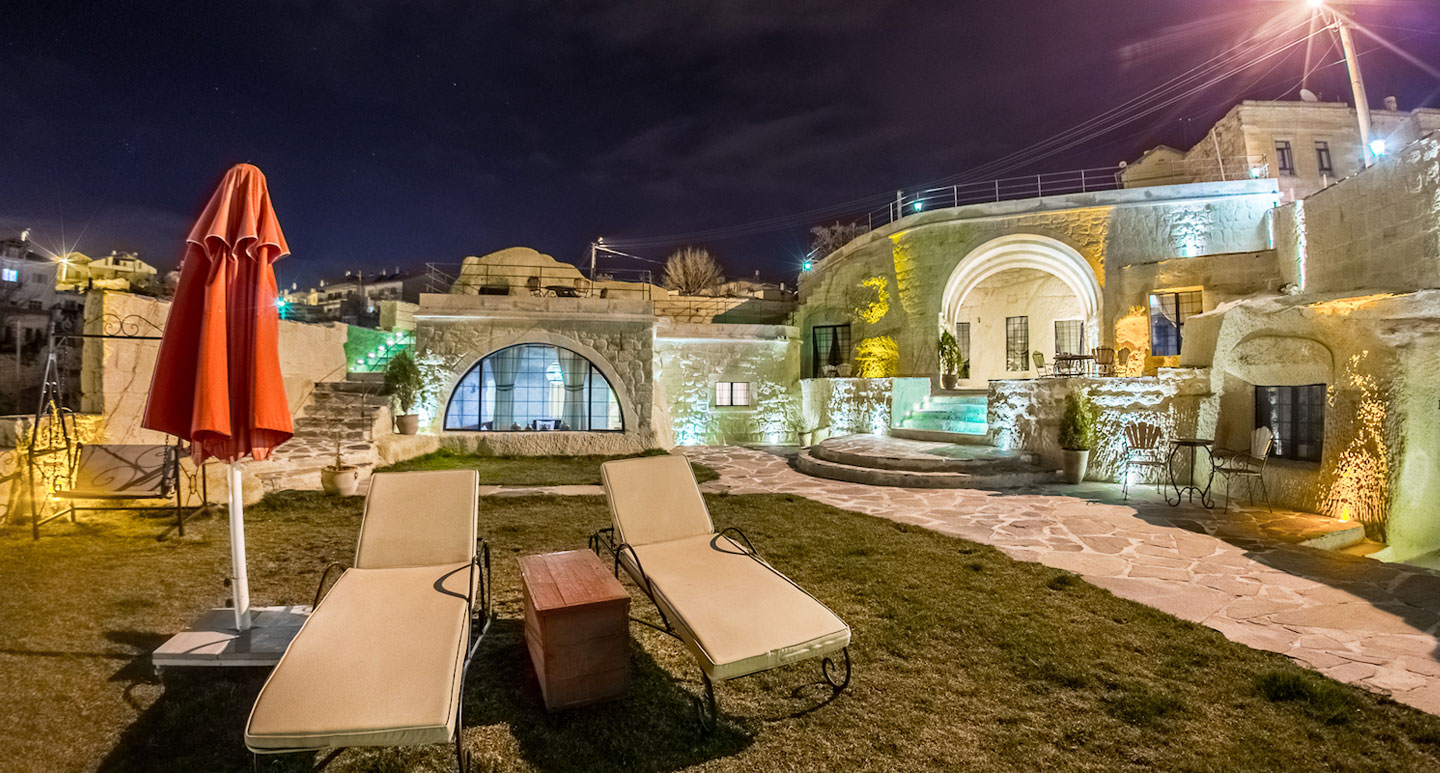 Even beyond the hurdles of governmental approval, this new age would require leaps of creativity. Preservation of the ancient structures was the first priority, but conservation would have to come simultaneously along with upgrades for discerning modern customers. At Hezen Cave Hotel, some rooms had the unenviable problem of only reaching a meter and half in height. Unless their guests were expected to crawl around their rooms, something had to change — and yet, raising the ceilings would have required massive overhauls.

“We wanted to keep the structure and beauty of the original cave,” explains Hezen’s Hakan Guzelgoz, so instead of scraping up, they dug down, keeping the ceiling in place while extending the ground by up to a meter. The cleaning process was similarly conscientious, with rocks removed in small segments, cleaned by hand, and reworked when necessary with the same techniques used by the first builders — all to “keep similar hand hammer traces” as the original.

Renovation becomes even trickier when you consider the modern marvels demanded by hotel guests — namely, the internet (not to mention, electricity and plumbing). Instead of running cables along the inside of the wall and exposing a line on the stone, Hezen Hotel instead opted to drill small openings in the rock, feeding longer cables towards the interior and back out again, necessitating a blemish only at the points of entry and exit. Even then, builders collected the rock dust and used it to make a caulk that matched the color of the cave. 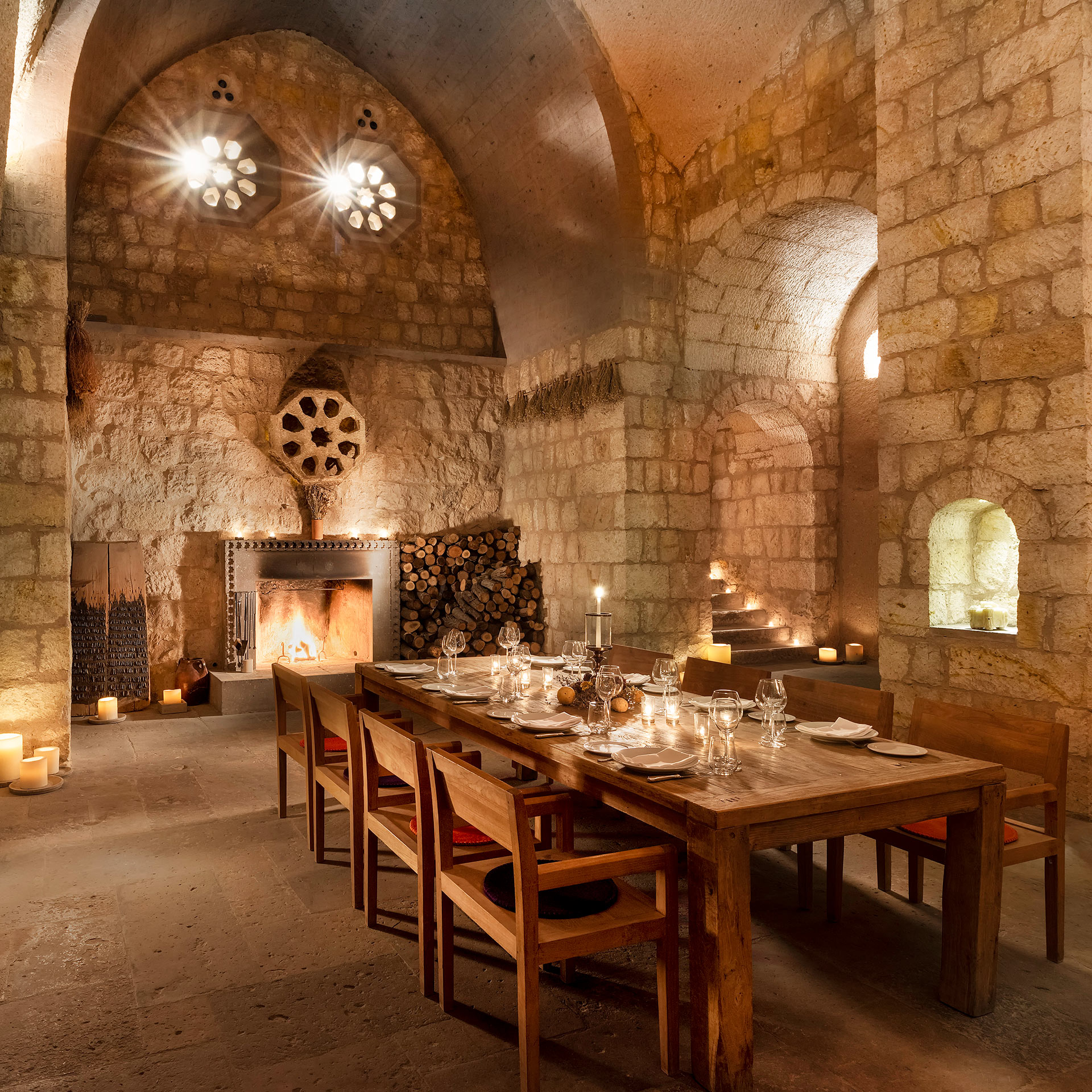 Despite all the manpower, all the brainpower, involved in the initial work, these are still caves. They’re never truly finished products. Maintenance is crucial to preserving and reinforcing them. Arches and columns — fixtures of traditional Cappadocian architecture — are sometimes added to reinforce deteriorating spaces at the outset, but these habitats, as Museum Hotel puts it, are “living elements.”

In other words, they shed.

“Sometimes minor cave parts may fall to the bed or ground,” explain representatives from the Museum Hotel. “You have to deal with them all the time.” In the winter slow season, a hotel might close a set of rooms for maintenance, reinforcing the soft parts of the cave with special varnish.

But those are the nuts and bolts, the walls and floors. The beauty of these places is that you won’t see those seams at all. For all the work that went into them, as an experience they’re all elegant novelty. Speleoboutiques, if you will. No matter what you know about the process, you still feel that you’re drenched in history, sleeping in a cave, experiencing life as the ancients did. 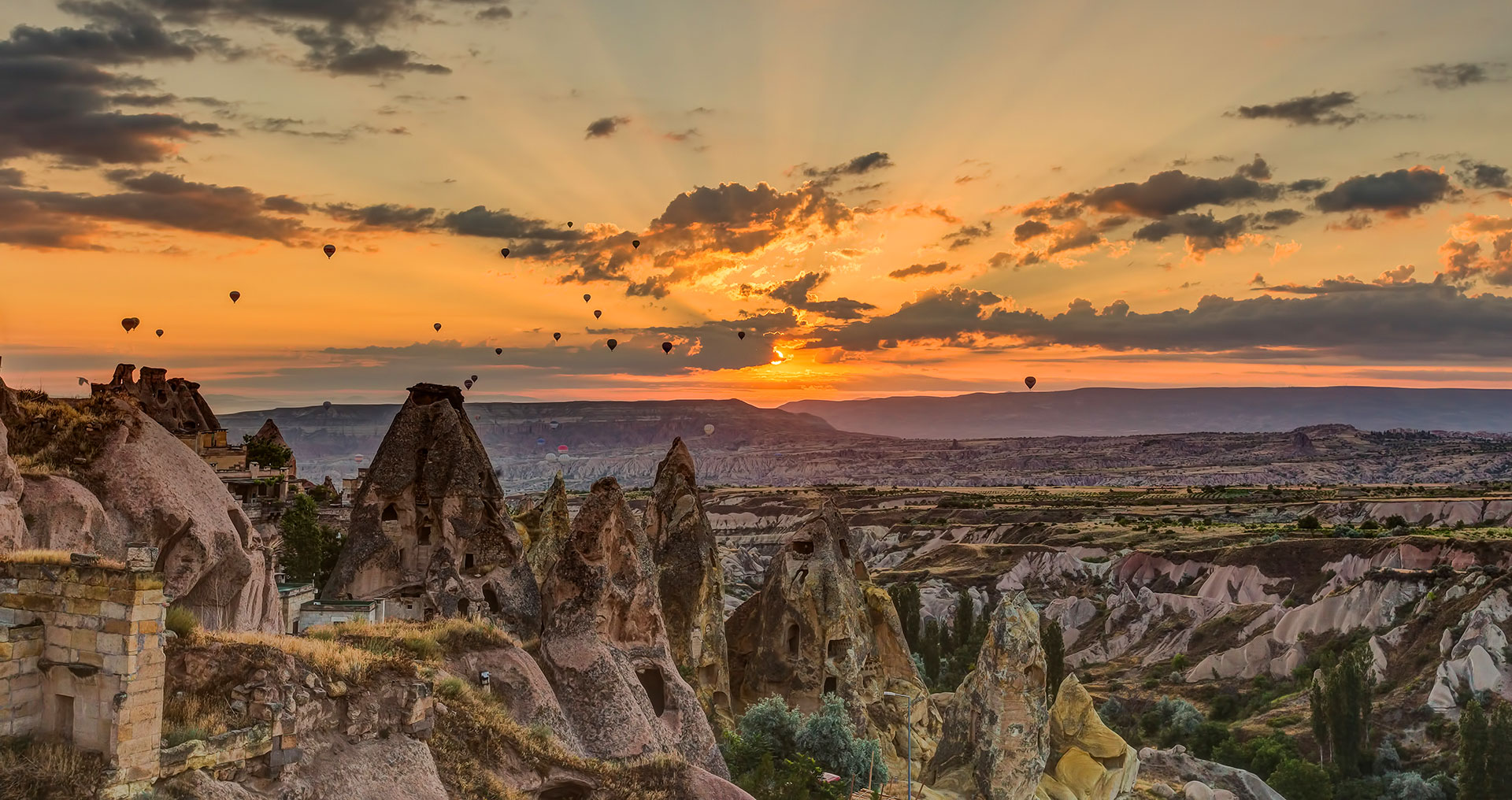