Tulum grew from a remote outpost of counterculture to a global hotspot of tourism. We were curious about how that transformation happened, and what was sacrificed along the way.

Next week, like pretty much every other travel-adjacent publication, we’ll unveil our picks for where you should travel in 2020. Most yearly travel guides focus on places that are “up and coming” or “the next big thing” — in the early aughts, Tulum was one of those places. The Mexican coastal town has long since capitalized on that prophecy, but what made it so special in 2000 is becoming harder to find in 2020.

That’s not to say Tulum isn’t still a wonderful vacation spot. The Riviera Maya, the region along the Caribbean south of Cancún, is spectacular, and development in the area over the past twenty years has led to dozens of excellent restaurants and hotels. The growth has made clear that the days of Tulum as a rustic hideaway for hippies and backpackers are fading away — and since “roughing it” isn’t for everyone, not everyone needs to lament the change.

Yet, there is no doubt that something singular has been lost.

Tulum isn’t the only one. We’ve all heard about tiny towns that blew up into bona fide tourist destinations. But how exactly do the dominoes start their fall, and what do they push aside in the name of progress?

And why should you care?

It started in the 1970s, when the Mexican government took “mostly empty land” and purposely converted it into a politically ordained vacation destination. That was Cancún, an effort to create a mass tourism destination from scratch, and it was — if you consider the sheer number of visitors — a resounding success.

Ever since, tourism has been steadily creeping south. After Cancún went mainstream, and Playa del Carmen followed, it was only a matter of time before the wave of recognition would wash over Tulum — its beautiful jungle, framed by ocean and 11th-century Mayan ruins, was impossible to ignore. A piece in The Cut titled “How Tulum Became the Williamsburg of Mexico” spells out the key moments in Tulum’s march out of tourism anonymity. The development of a highway from Cancun to Tulum was one. The rechristening of the bland “Cancun-Tulum Corridor” into the sexy “Riviera Maya” in 1999 was another.

Those nostalgic for the Nineties remember a shared sense of community between the visitors. Read about Tulum tourism back then and you’ll find phrases like “countercultural haven” and “quasi-mystical atmosphere,” descriptions meant to denote a beacon for spiritually minded travelers inspired by the picturesque landscape and Mayan ruins.

At the end of the century, concepts like meditation and yoga, along with a lack of electricity and relative isolation, were more emblematic of Tulum’s appeal than any party scene. By the early aughts, however, celebrities and trendy photographers were spotted on the beaches, and Tulum’s status as a “hidden gem” was quickly established — a pied piper call to tourists around the world to come discover Tulum. The transformation was so sudden that by 2004 the New York Times was already lamenting the “encroachments of commercialization” tainting the tourist scene.

The hidden gem had been discovered. By 2018, the population was at 40,000 residents, with nearly 2.5 million visitors each year.

Before Tulum tourism went mainstream, before the first Starbucks, it was defined by something more simple. In those early days, Tulum was considered the perfect fantasy of unplugged beachside utopia, and Papaya Playa was the perfect hotel from which to experience it. Actually, it wasn’t really a hotel, and it didn’t really have amenities, or even electricity. But it did have jungles and beaches and campfires and cenotes and, most importantly, guests.

It was a paradise, so long as you knew that paradise had a shared bathroom, and a flashlight to help you find it at night.

“It was basically like camping,” explained one Papaya insider, Sandra Beltran, marketing director at Hamak Hotels. “But the location was unbelievable.”

The hotel was nothing more than primitive huts on the beach, and for those first visitors, that’s all it needed to be. Today, that kind of elementary living is unthinkable for a tourist in Tulum, or for a guest at Papaya Playa. The hotel has developed along with its surroundings, and as it’s done so it’s had to ask an important question, one that’s relatable to every former hidden jewel the world over: how do you grow up without losing what made you special in the first place?

For Emilio Heredia, the founder of Papaya Playa, finding a way to grow alongside the popularity of Tulum — without losing the original character of his property — was a challenge, but a fascinating one. “Our inspiration is our love for nature,” he told Tablet Hotels. “A simple interaction between the simplicity of the jungle and the sea.”

Heredia, a former finance executive with interests that span yoga and the Tao, was the ideal hotelier to preserve the mystic, healing vibe that Tulum had cultivated, even as more and more tourists flooded in and more and more overdevelopment threatened to change the context.

In 2011, Heredia partnered with Design Hotels, adding the “project” to Papaya Playa Project and working to grow the hotel in a way that stayed true to his original vision of peaceful coexistence with nature, while nonetheless accommodating the much-broader tastes of Tulum’s post-coming out economy.

In 2020, you’ll still find the cabanas — the closest in spirit to the original lodgings — at one end of the property, now with bathrooms and air conditioning. Next to them are the casitas, bigger rooms that can have multiple stories and swimming pools. Then there’s the most luxurious option: the casas, seven complete houses that flaunt the most creative design on the grounds. Among them are specimens like Casa Arbol, a bulbous five-room treehouse besieged by jungle on every side.

“It evolved,” clarifies Beltran. “But there’s never been a master plan.”

Far from anarchy, an allowance of flexibility has been a unifying principle for Papaya Playa. What might feel haphazard, with accommodations zig-zagging through the jungle, is a result of structures and floating walkways arranging themselves around the natural landmarks instead of bulldozing through them.

The design of Papaya Playa is unmistakably specific to its place, and further “evokes the traditional Mayan way of building” through the use of chukum, which is the name of both a material and a technique used for hundreds of years to keep buildings cool. Meanwhile, the rugs, the baskets in the rooms, even the holders for the shampoo and conditioner, are all locally made.

Searching for the Soul

Heredia’s efforts to develop Papaya Playa in adherence to his principles sets the hotel apart from some of the more thoughtless development of Tulum, including the threats of anachronistic architecture, uninspired restaurant and retail chains, and other lodgings that, unlike Papaya, could exist anywhere else on the planet.

In cultural ways, too, the sheer numbers of tourists were changing what Tulum meant to the first visitors, taking old traditions and contorting them for a mass audience. “The spirituality has become the party,” one disillusioned Tulum resident told The Cut, in another piece (tilted “Who Killed Tulum?”) that bemoans the town’s slide into Ibiza-like mass tourism. “The shamanic DJ and this and that.” The soul of Tulum, its rustic isolation and spirituality, was evaporating in favor of new construction and spiritual parody.

Papaya Playa, itself not unknown for its mystic-themed parties, sees the same problem, and wants to address it. Without eliminating the full moon and New Year’s parties their guests have come to expect, they’ve also begun to bring in resident artists, host art walks on the grounds, and start planning for a bigger project: an artisan market within Papaya Playa itself.

With a focus on Tulum-specific art and the local community, maybe they can preserve the early days of tourism in Tulum. At least on their own grounds.

Why Should You Care?

Not everyone can backpack through jungles or camp out on the beach. Not everyone likes yoga and meditation. For them, Tulum’s transition from a spiritual haven to a less obnoxious Cancún is a welcome advancement. And it’s true that a crop of incredible boutique hotels have sprouted up throughout the region in recent years. Tulum is just different now. But at what cost?

Even the earliest waves of tourism changed Tulum in irrevocable ways, bringing economic opportunity but also societal upheaval. In the study we cited above, anthropologist Ana M. Juarez explained who exactly had moved to Tulum to capitalize on the changes: “foreigners” who “intensified their expropriation of Maya lands and natural resources,” rapidly expanding to numbers larger than the local population and dominating every aspect of society.

If the cultural and spiritual dilution of Tulum is too nebulous for you, rest assured mass tourism has brought concrete environmental problems as well.

Hotels like Papaya Playa have implemented sustainability measures to reduce carbon emissions, recycle water, protect the turtles, and preserve vast swaths of its jungle. But as with nearly every place that undergoes a tourist or population boom, a lack of government regulation in the face of population changes has nonetheless had environmental consequences. Water contamination, overflowing landfills, cleared forests, and dying coral reefs remain an issue.

By the end of 2018, the government responded, declaring Tulum “Mexico’s first sustainable tourism zone” and setting the stage for “stricter building regulations” and financial support for wider sustainability programs. Whether it’s enough, we don’t know. Activists are still fighting for more measures and accountability as the tourism boom continues.

Meanwhile, the next hidden gem in Mexico has been identified. Bacalar, with its “lake of seven colors,” Mayan history, and Instagram appeal, is already being called “the next Tulum.”

It’d be wise to take a few lessons from the original. 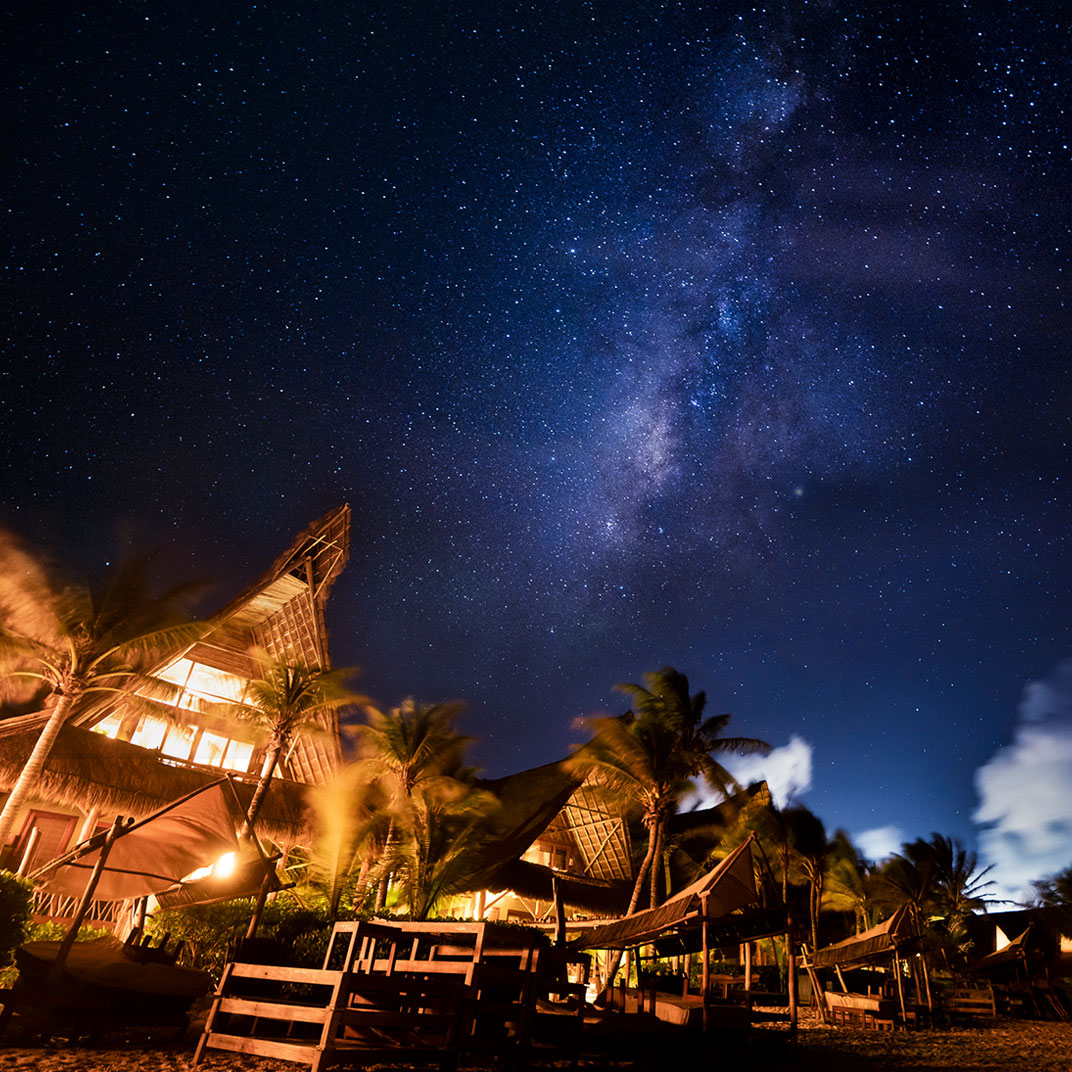 If you’re planning a trip to Mexico and the Riviera Maya, be sure to check out our hand-picked selection of the best luxury and boutique hotels in Tulum.