A hotel bar that only attracts hotel guests is fine. A hotel bar that also attracts locals — that’s a sign that somebody did something right. Lily Heise, an expert guide with Context Travel, explains why there’s a lot going right in Paris these days.

A run-of-the-mill hotel probably has a run-of-the-mill bar — a last resort for guests looking to escape the confines of their run-of-the-mill rooms. But the days of hotel bars being only an adequate place for guests to grab a nightcap are melting as fast as a standard ice cube. This is especially the case in Paris, where a number of new or reinvented hotels have paid as much attention to their bar as to any other aspect of their design, all in an effort to bring the outside in — from the distinctive vibe of the surrounding neighborhood to the local residents themselves. 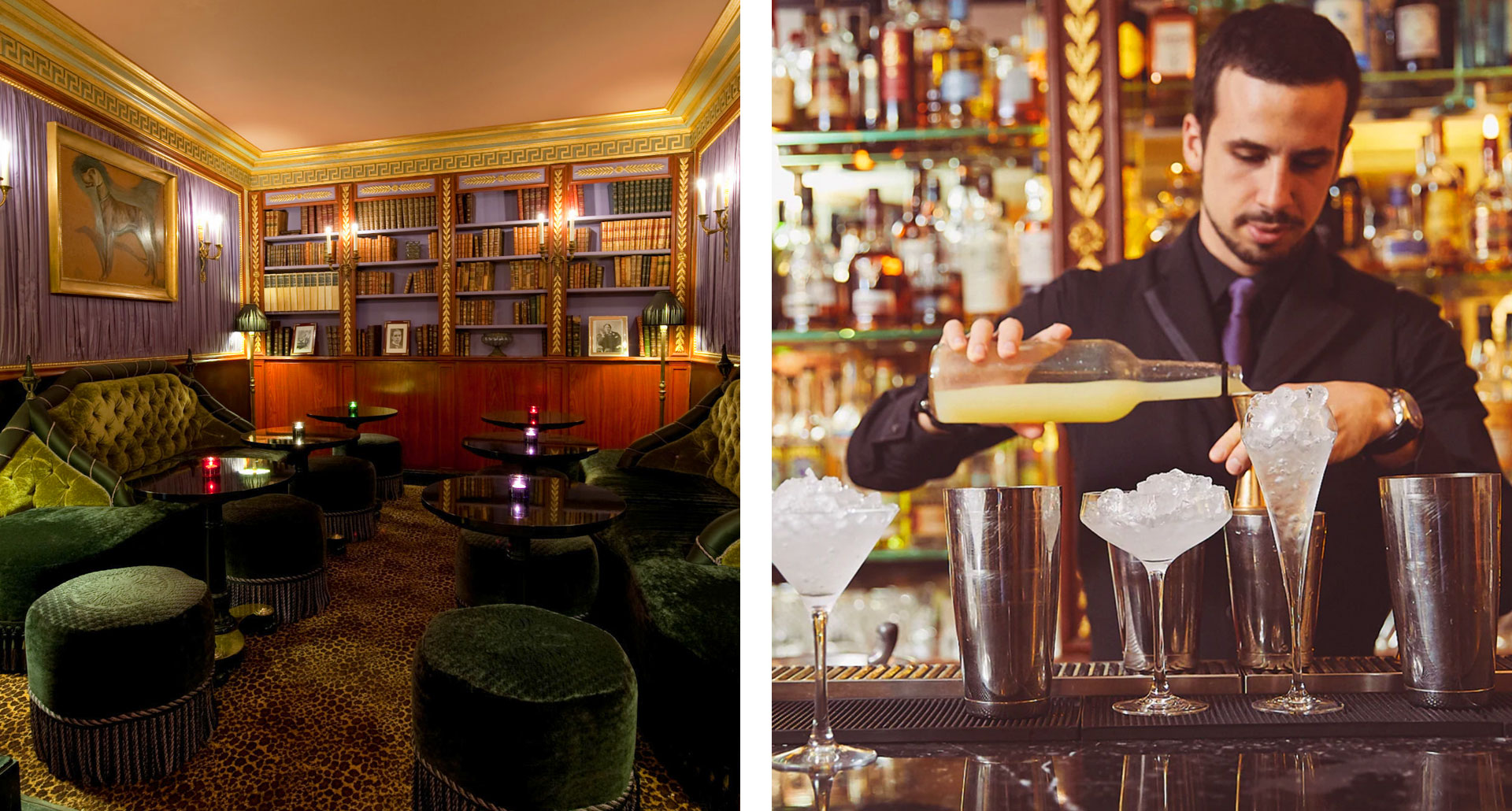 Tucked away on a small side street in the Saint-Germain district, this discreetly glamorous hotel with only 20 rooms was the last residence of Oscar Wilde and the Paris base for celebrity couples from Frank Sinatra and Ava Gardner to Richard Burton and Elizabeth Taylor. Star hotel designer Jacques Garcia, of Hôtel Costes fame, gave the hotel a seductive makeover, marrying extravagant Empire style and modern elegance. This ambience flows over into Le Bar, where you can settle into velour banquettes amidst books and marble columns while sipping away on their signature cocktails like Into the Wilde and the L’Hôtel Spritz. 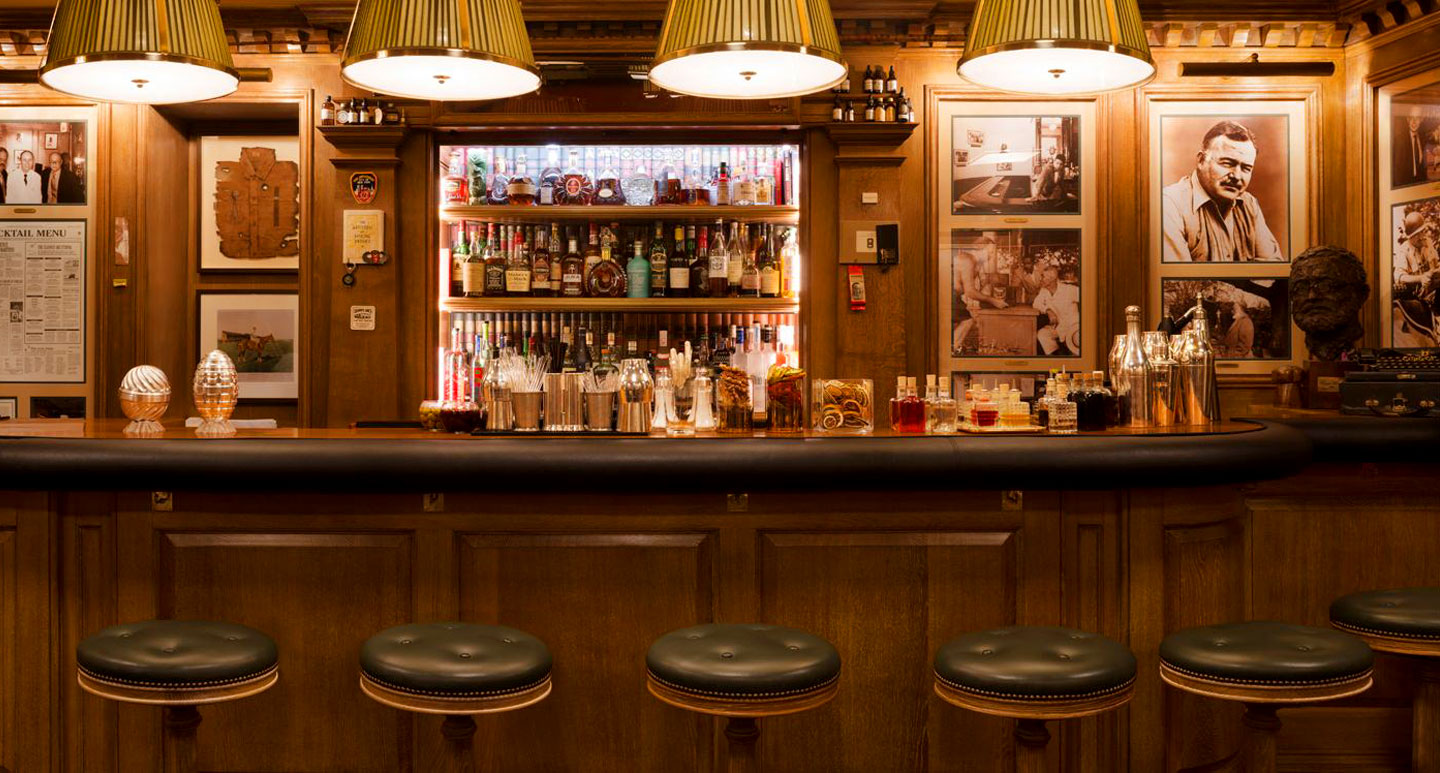 One of Paris’s most legendary watering holes, the Ritz’s Hemingway Bar was famously “liberated” from the Nazis during WWII by its literary namesake. The bar’s historic atmosphere was fortunately preserved during the hotel’s extensive renovations, completed in mid-2016. Behind the bar you’ll find award-winning head barman Colin Field mixing his impeccable cocktails such as the Clean Dirty Martini, Old Cuban, and Hemingway’s Paparazzi. Leather seats, tables for two, and walls decked out in Hemingway memorabilia add to the magic. 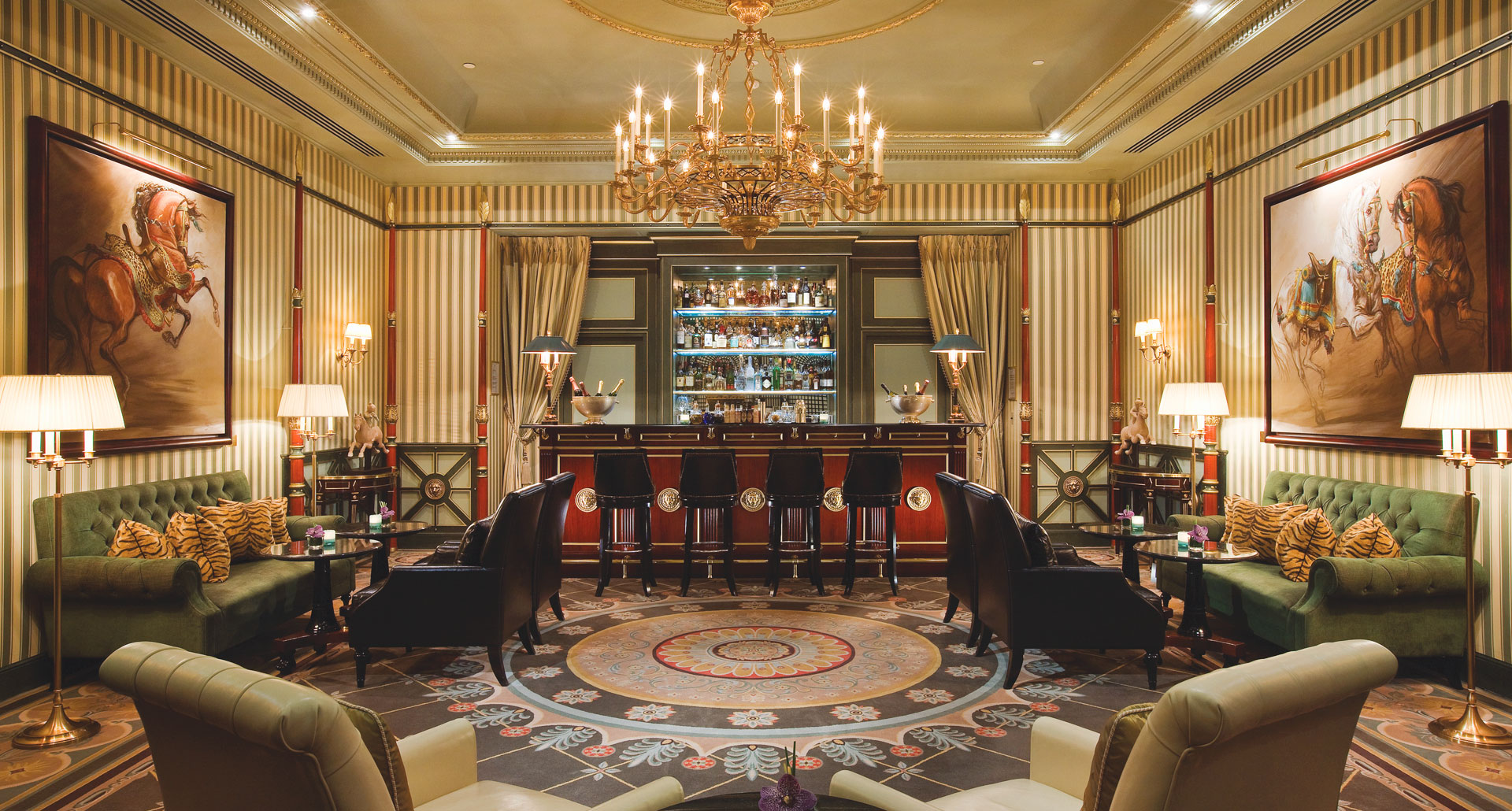 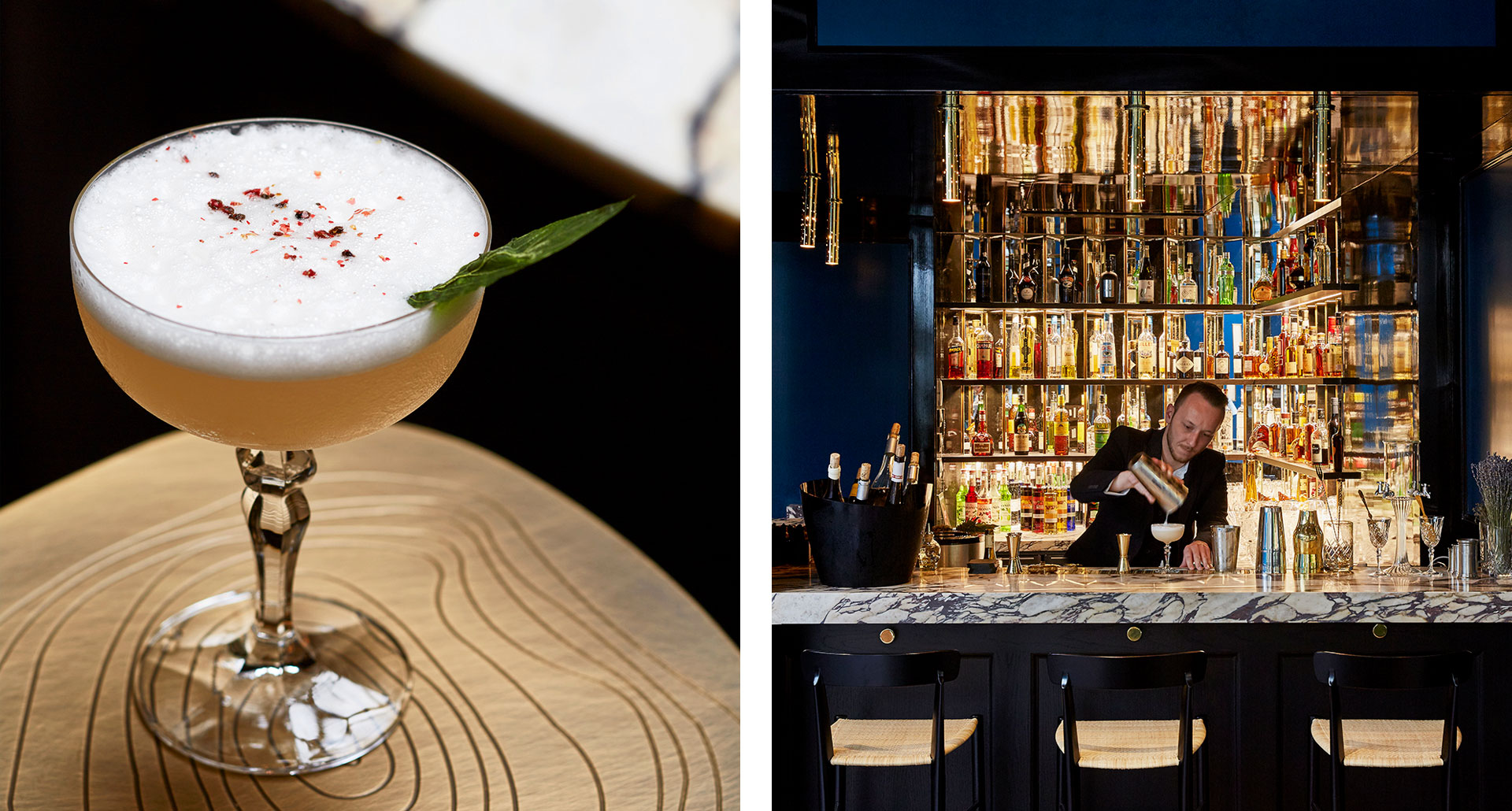 French designer Sarah Lavoine has succeeded in creating one of the most stylish contemporary hotels in Paris in this made-over 19th-century building tucked away near the Louvre. A glass atrium casts gentle light onto the alluring restaurant featuring tones of peacock blue, sea green, and beige. Seasonal cocktails and refined nibbles can be ordered at the adjacent bar, next to the fireplace, or on the tranquil courtyard terrace. 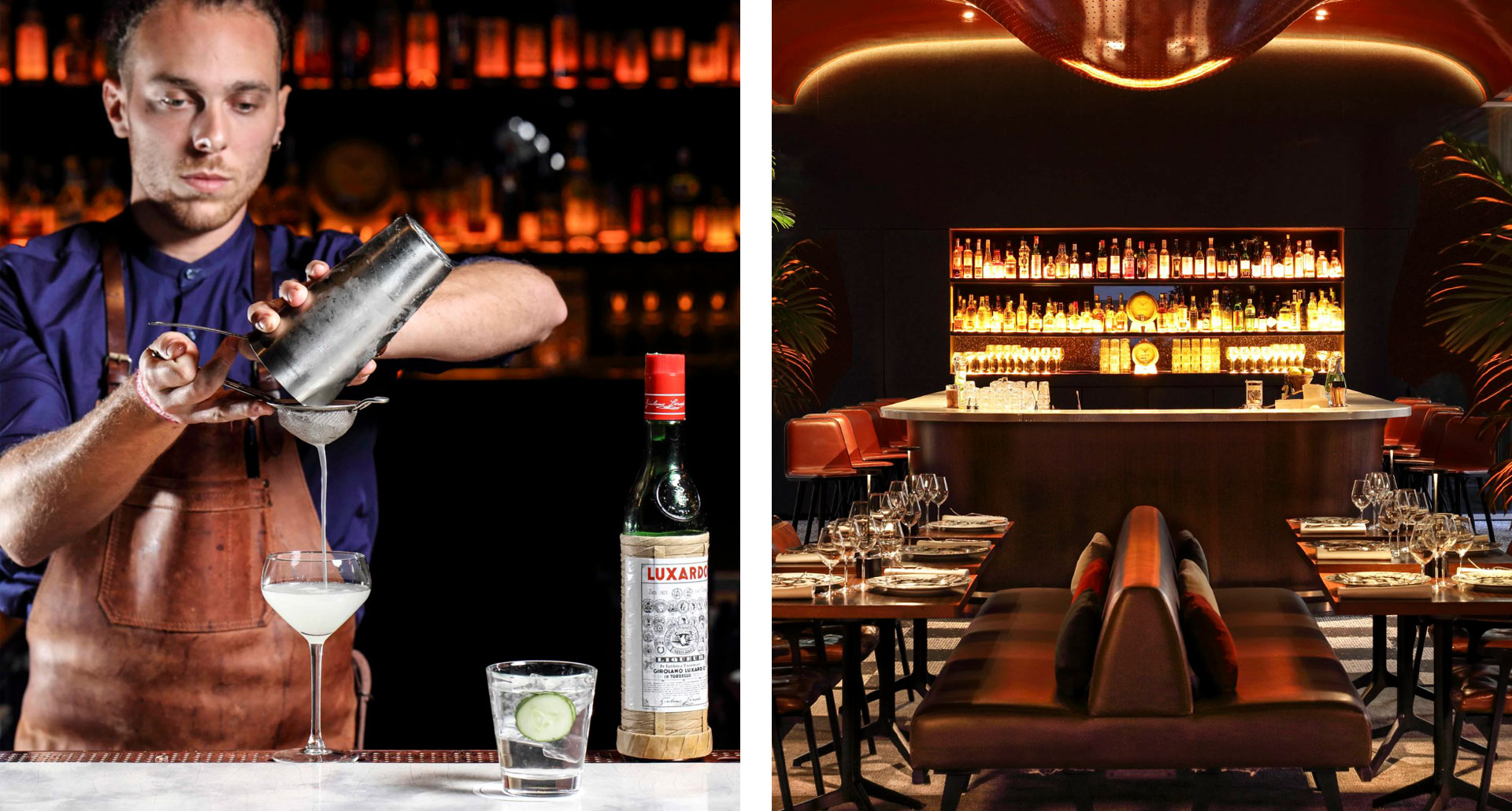 The latest in Paris’s trend of revamped luxury hotels, the facelift of historic Les Bains, first opened in 1885, came with Roxo, a sleek new bar and restaurant. The bar’s chic, seductive new look was matched with a stellar roster of award-winning mixologists who have designed a unique cocktail menu inspired by the hotel’s heritage. 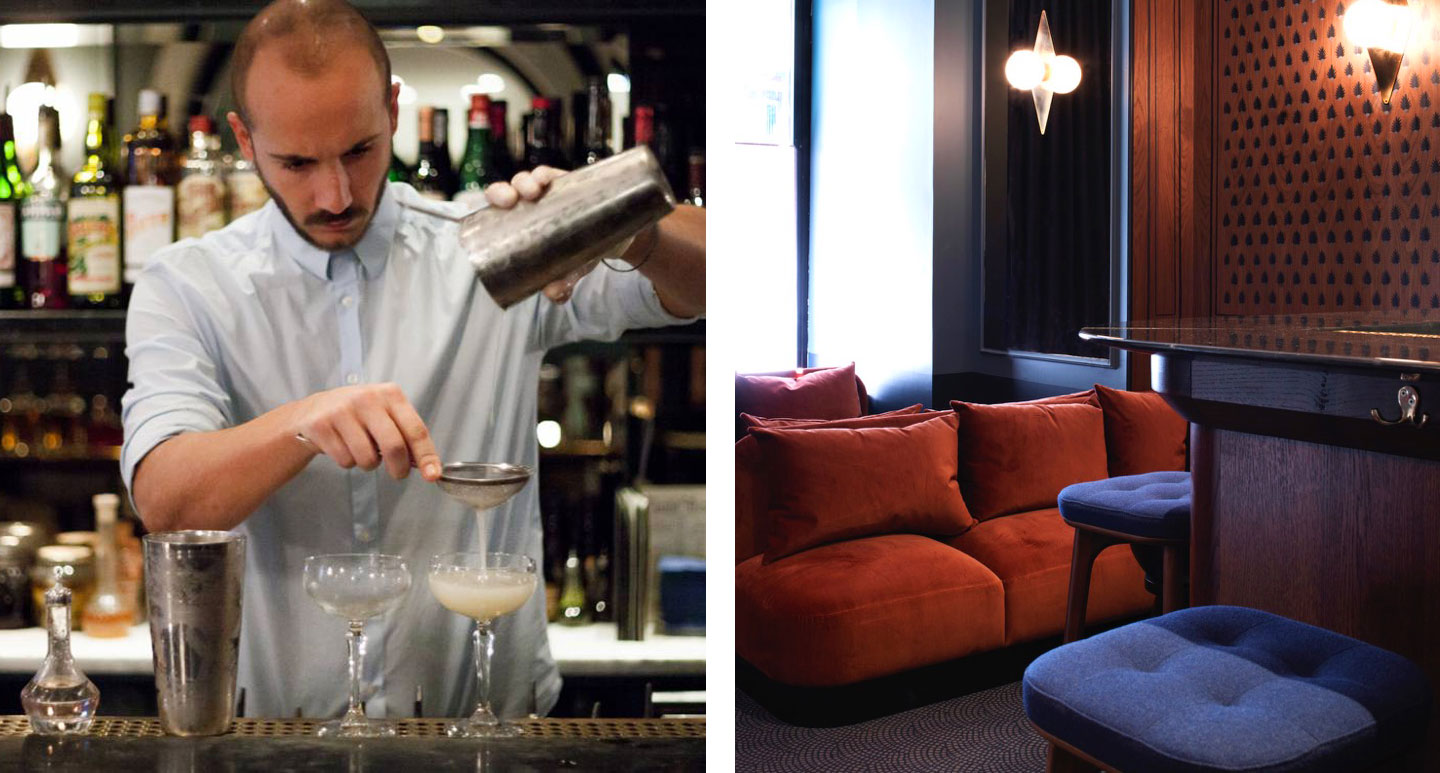 Possibly the hippest of Paris’s new hotel bars is found within the recently refurbished Hotel Bachaumont. Inspired by the novel Vol de Nuit by Antoine de St-Exupéry, author of Le Petit Prince, the bar’s discreetly chic contemporary décor — the work of hotel designer extraordinaire Dorothée Meilichzon — transports you on a whimsical and romantic night flight with their exquisite cocktails providing the fuel. 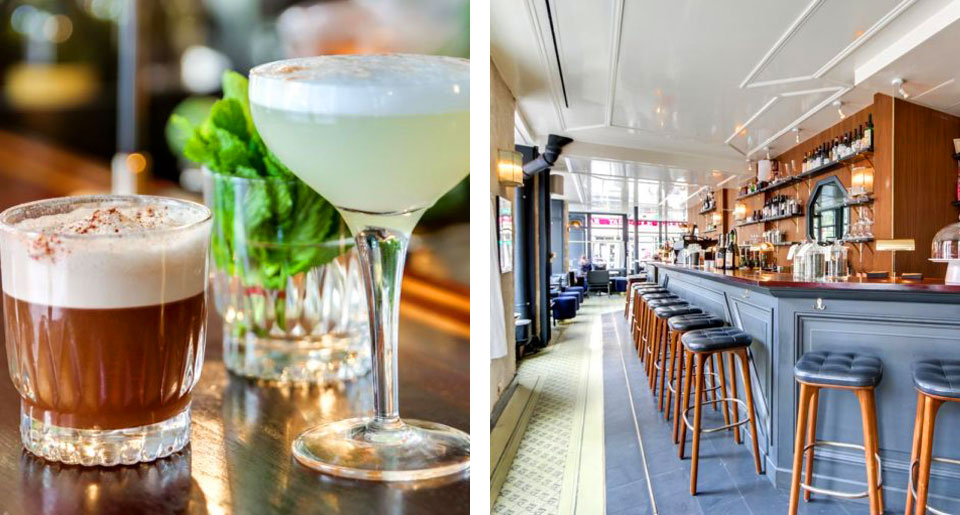 The Pigalle district’s rising cocktail scene received a posh addition in 2015 with the arrival of this boutique hotel and bar. The Grand Pigalle is the brainchild of the Experimental Group trio, whose Experimental Cocktail Club, opened in 2007, was one of the first of Paris’s new age of serious cocktail bars. Swank yet not too showy, the classic black leather chairs, smoky grey sofas, and long sleek bar are accented with details from pineapple knockers on doors throughout and a martini glass dotting the carpets. 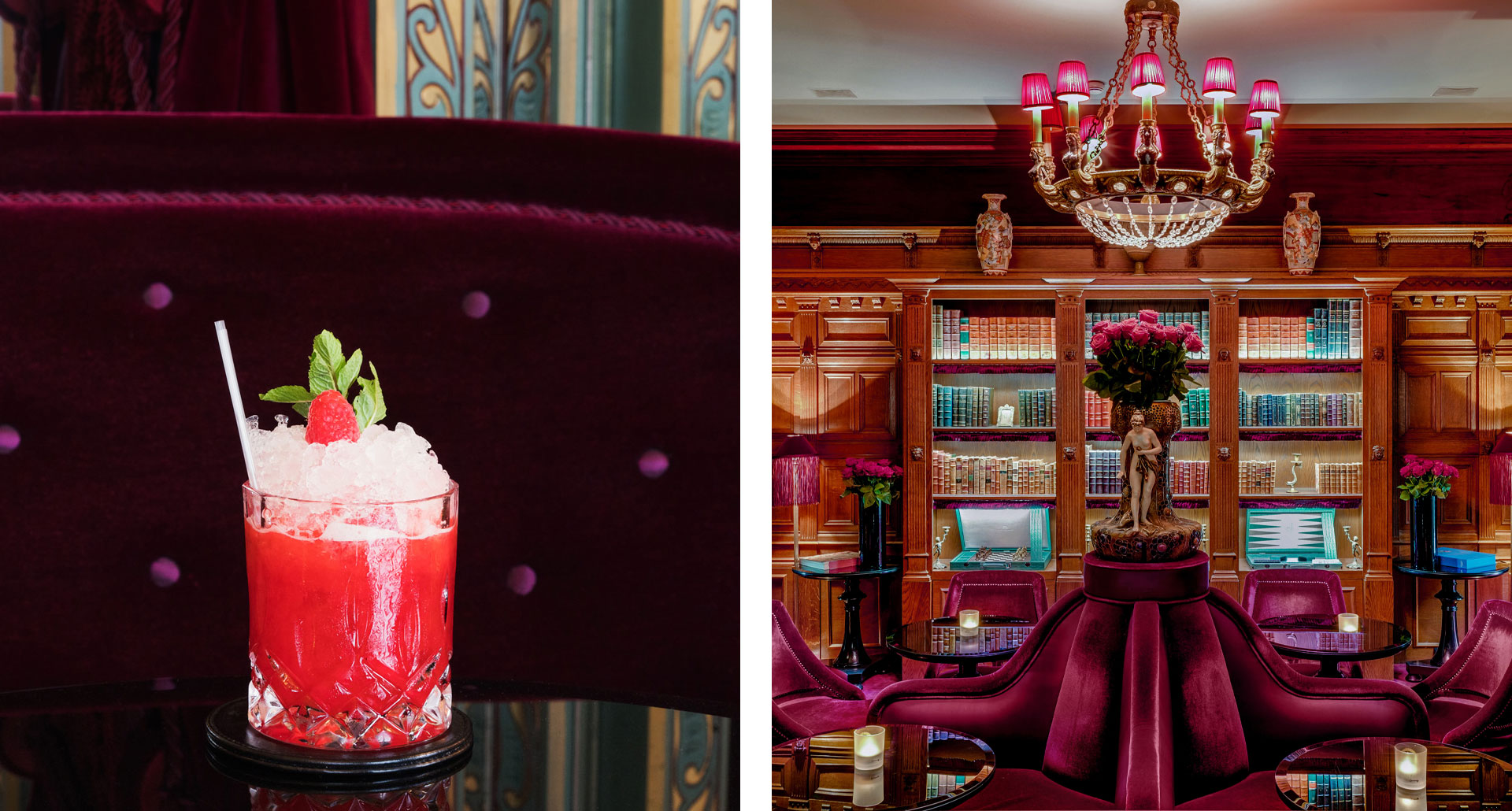 Easily the most sensual bar in Paris, this former turn of the 20th-century maison close, or brothel, is another alluring hotel project signed by Jacques Garcia. The designer impeccably recreated the boudoir lavishness of the Parisian Belle Epoque both in the hotel rooms and the ground floor common spaces. The enchanting ambiance begins as you enter its exotic Arabesque foyer. Rounding the corner you slink into the seductive bar area with lush red velour seating, low lighting, paintings of glamorous ladies, and a tiny winter-garden courtyard. It’s the supremely perfect atmosphere for a romantic tête-à-tête before dinner out in the hip Pigalle district.

Before you head to these great bars, explore the surrounding neighborhoods with Context Travel’s custom tour of Paris, which offers you the opportunity to design a tour of the city tailored to your interests. Context Travel offers expert-led cultural and historical walking tours and activities for travelers who love to learn, in over 50 cities around the world. Tablet Plus members receive exclusive discounts on private tours from Context.

Written by guest author Lily Heise, a freelance travel writer who has been living in Paris since 2000. She holds a Fine Arts degree from the University of Guelph and is also the author of two books on looking for romance in Paris, as well as an award-winning blog on Paris, travel and romance, Je T’Aime, Me Neither. She is also an expert guide with Context Travel. Read her other Paris story for Tablet, Under the Radar.

SEE ALL OF OUR HOTELS IN PARIS