The Florida Keys of the 19th century were nothing like they are today. Before tourism dominated Key West, several adventurous professions made it one of Florida’s most booming industrial cities.

If you hate Margaritaville for its kitschy depiction of tropical melodrama, blame Jimmy Buffett. Jimmy Buffett, then, can blame Key West for giving him the inspiration, and Key West can turn right back and blame him for the fact that instead of a rich, fascinating history, their island now conjures images of tourists nibbling on sponge cake.

Truthfully, it’s not Buffett’s fault. Key West underwent a thorough transformation into a tourist paradise some 50 years earlier. In his own version of Margaritaville, a 1935 Esquire article, Ernest Hemingway was already observing the same pervasive crowds, lamenting that his house’s address had just been added to a tourist brochure.

It may seem inevitable now, but it wasn’t always this way. Before Key West revitalized and transformed its image into an idyllic tropical destination, it was an industrial maritime center, a picture of thriving 19th-century industry. Today, that picture has largely faded from history.

Why? Some people claim that there’s a woman to blame.

Among the industries that made 19th-century Key West an economic force was a strange practice called wrecking. Not wrecking as you may have heard of it today, as in diving to explore long-sunken ships, but a different idea entirely. This type of wrecking rose out of the dangerous but conveniently located waters of the Florida Keys.

The Art of Wrecking

Those waters were full of storms, difficult currents, and one of the largest coral reefs in the world, as historian William C. Barnett explains in his fascinating essay, “Inventing the Conch Republic.” These dangers meant merchant vessels would crash their boats on the reefs so frequently an entire industry could grow out of their misfortune.

Peaking from the 1820s to just after the Civil War, most “wreckers” would go about their day jobs — perhaps fishing for turtles or sponges — until word reached them that a ship captain’s day was ruined. Arriving on the scene, these wreckers would provide their assistance in exchange for a share of the valuable cargo.

A quick word on those day jobs. The people of the 19th century were downright bloodthirsty for turtle, gulping down turtle soup by the shell-full. In much of America, people ate snapping turtle or terrapin, but the Florida Keys were famous for green sea turtles. In New York or Europe, they were marketed for the wealthy, or as one newspaper put it, for “confirmed epicures.” On the other end of the menu, William Tecumseh Sherman wrote in his autobiography that “they are so cheap and common that the soldiers regard it as an imposition when compelled to eat green turtle steaks…” Like wrecking, this bounty wouldn’t last forever.

But back to the wrecks.

Once moored on the reef, damaged or sinking with a hold full of valuable goods, a ship’s captains had little choice but to accept the help of the wrecking vessels swarming around him, who would then save the crew and cargo and, if all wasn’t lost, bring the boat to port for repairs.

Not that boat captains would always want to accept the wreckers’ help, as author John Viele explains in his informative book, The Wreckers. For one, they were largely seen as morally compromised, almost like pirates, making their living off the bad luck of sailors. “True, their business does grow out of the misfortune of their fellow men,” rebutted the New York Times in 1855, “but so does the healing art, and the physician is not more welcome to the sick man, than the wrecker to the tempest-tossed mariner.”

Whether they’re pirates or physicians, if you could manage to dislodge your boat from the reef yourself, you’d do it. Because when you accepted the assistance of a wrecker, you accepted their fees — and a federal judge waited at court in Key West to adjudicate the inevitable disputes.

As you already know, the golden age of wrecking wouldn’t last forever. As Barnett argues, in many ways the economy of Key West depended on inefficiencies that, looking back, seem to us almost outrageously solvable. Today, we see the same thing: complex new technology — like robotics — destroying once crucial industries. In the 19th century, the part of robotics was played by lighthouses.

“I wish them d—d lights was sunk below the sea,” one wrecker told Hunt’s Merchants’ Magazine in 1852, the ridiculous antiqueness of the situation only underscored by the unnecessary censorship.

And yet, it’s as obvious a 19th-century parallel as you’ll find to one of the modern era’s most pressing contemporary issues. What do you do when technology makes an industry obsolete? Between the new lighthouses, steamboats, and a long-awaited charting of the reefs, wrecks dwindled until wrecking itself dwindled from memory.

Briefly, a boom in turtle and sponge fishing filled the void left by wrecking. Sponging especially seemed the savior. After a rich area of sponge bed was found in “the remote back country of the Florida Keys,” the sponge industry began to replace the fading wreckers as thousands of dollars poured in from sponges exported north from Key West.

But as the industry became more lucrative and enterprising fishermen caught on to new, more efficient technology, including diving hoses and lead boots, the sponges in the Keys were nearly wiped out. The same is true for the population of sea turtles, which couldn’t survive in the face of the demand and efficiency of the turtle canneries.

All three of these industries depended on inefficiencies to prolong their lifespan. Once the march of modern progress interceded, the ships sailed safely, the turtles disappeared, and demand for sponges — however many remained — was further doomed by a switch to synthetics.

And that’s where Hemingway comes in, our proto-Buffett who discovered a fact that’s still true. Key West doesn’t feel anything like the rest of the United States. The island hadn’t been able to compete with the modernization in the rest of the country but, as Barnett put it, outsiders “seeking an escape from bustling cities” saw this as one of the island’s greatest appeals.

Nearly a hundred years after the close of Key West’s wrecking court, the Keys are booming again, to the tune of a $2.7 billion economy. Among the islands, more than half of of all jobs come from tourism. But now the Keys are facing their next challenge.

In what’s become a familiar story around the world, the reefs that once endangered ships are now endangered themselves by climate change. In a report from just this September, the decline of the reef was described by one scientist as “sad and heartbreaking,” while around the same time scientists at the Florida Aquarium sparked hope of restoration by proving they could foster new coral in a lab.

Over the summer, Florida senators sponsored a $160 million bill to restore the reefs.

Let’s hope Key West doesn’t have to reinvent itself again.

History’s all over Key West, from Hemingway’s home to the writers’ compound that hosted Richard Wilbur and Ralph Ellison. And while all the Keys boast a dreamscape of sport fishing, beach hanging, and everything else the sea provides, if you’re interested in exploring the Keys’ far-away maritime past, the Mel Fisher Maritime Museum in Key West stands out. Named for the 20th-century treasure hunter who found one of the most lucrative shipwrecks in Keys history, the museum explores everything from the history of Florida’s shipwrecks to its role in the slave trade, displaying plenty of Fisher’s rediscovered treasure. 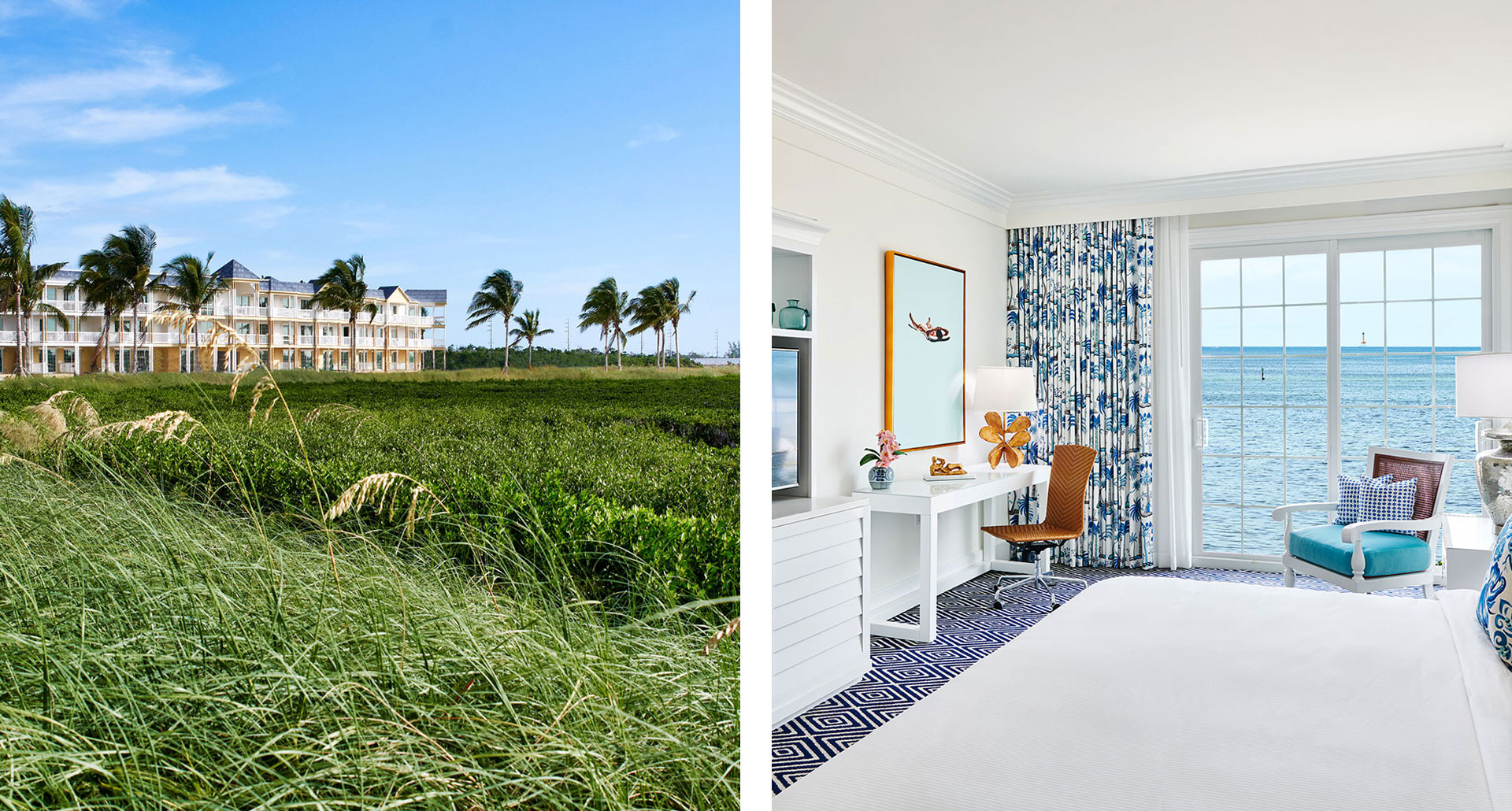 Mention the Florida Keys and you’re likely to imagine the bohemian romance of Key West and maybe Ernest Hemingway’s six-toed cats. But there’s a reason “keys” is plural. There are a multitude of islands here at the end of South Florida, and that means there are a multitude of travel experiences to be had. Typically that doesn’t mean a self-contained 24-acre luxury-resort experience, complete with five pools, a sandy beach, and nearly 200 suites. But that’s exactly the promise of Isla Bella Beach Resort, midway between Key Largo and Key West, near the east end of the Seven Mile Bridge. 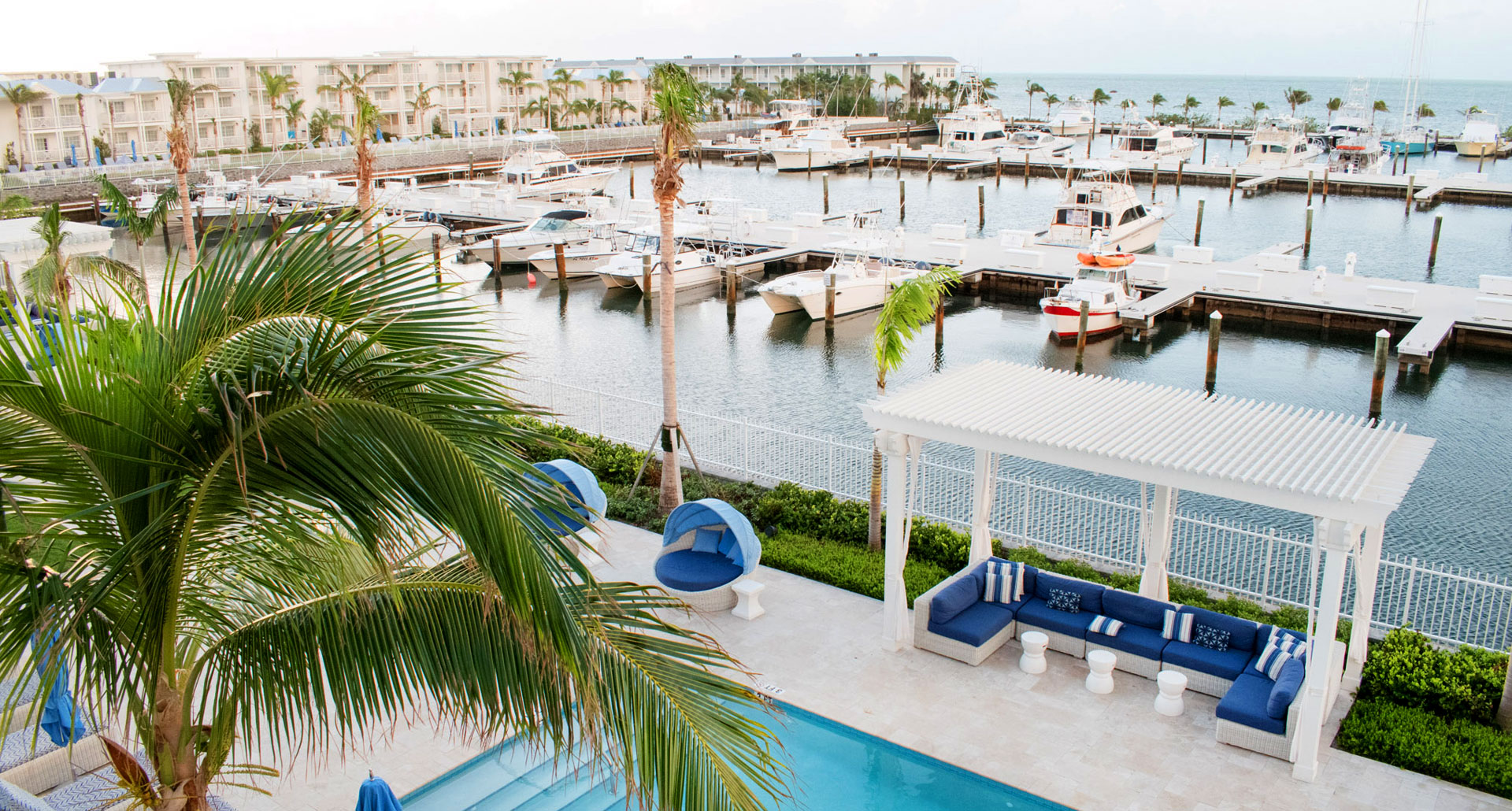 Geography pedants will note that this is actually Stock Island, the next one over from Key West, separated by perhaps a hundred feet of water from its more famous neighbor. But Key Next-West has plenty of its own to recommend it, including the fact that it’s got space for a brand-new purpose-built resort like Oceans Edge. Here every room has views over the marina out to sea, as well as no fewer than six swimming pools — this isn’t just the largest resort in Greater Key West, but features the largest rooms as well. If you want ramshackle bohemian town life, head west, but for a contemporary luxury experience, you can stop right here. 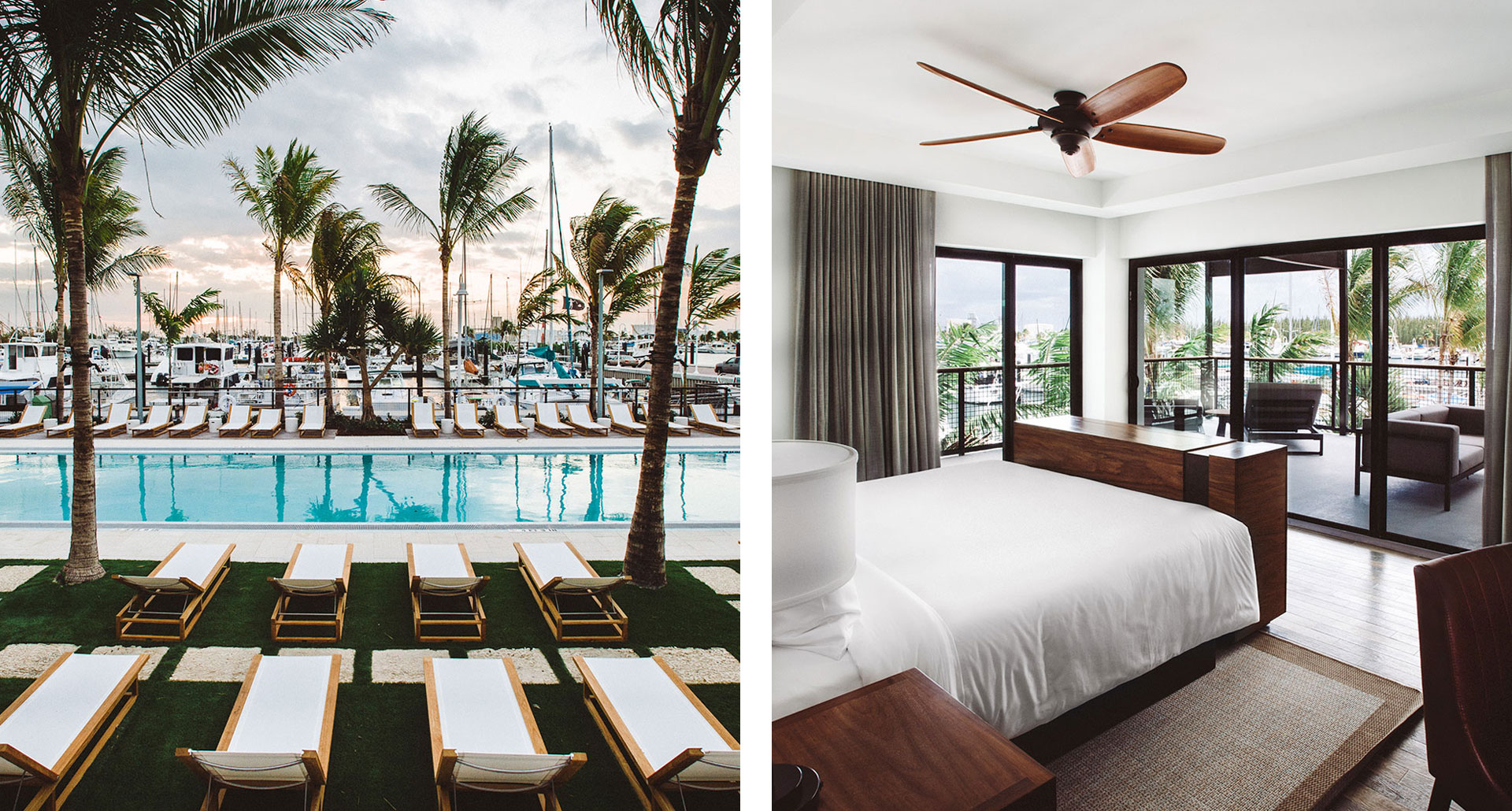 There’s not much new happening on Key West proper, mostly because the island’s most promising real estate rarely changes hands. But if you’re willing to expand your definition of Key West just the tiniest bit — incorporating Stock Island, so close to Key West’s eastern shore that you could literally throw a stone from one to the other — you’ll find something that’s not just new, but impressively well-crafted as well. The Perry Hotel was recognized right out of the gate as one of Architectural Digest’s best-designed new hotels, and while they’re certainly not wrong about that, the architecture and design are only part of what makes the Perry special. 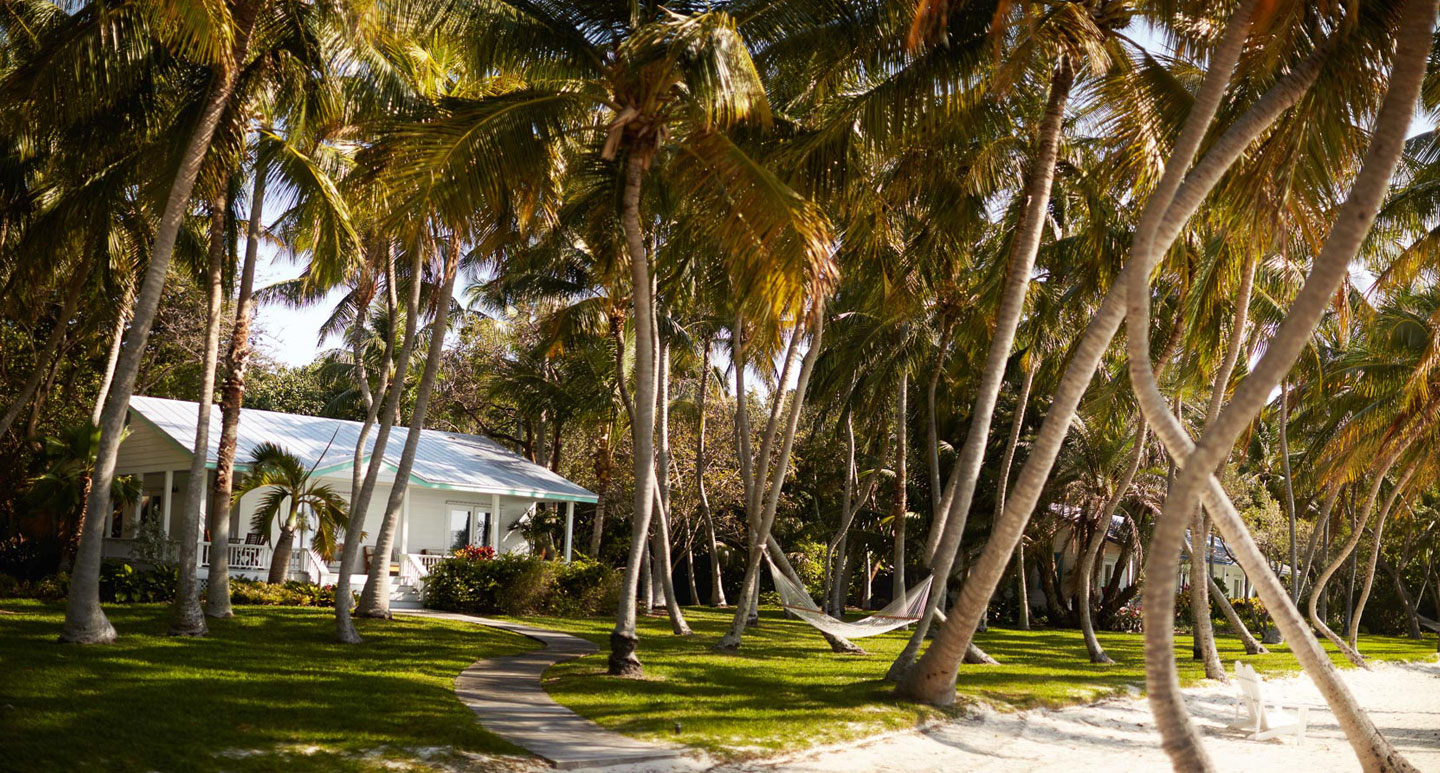 The style is a throwback to the days before jet travel, when the Keys were still as exotic as any overseas destination. And it’s also a throwback to the days when a private escape meant a quiet escape, rather than a 24-hour party. Your villa comes with at least a kitchenette, in most cases a full kitchen, and you can be as self-sufficient as you like — or you can socialize at the Beach Café or the more formal Pierre’s at Morada Bay. 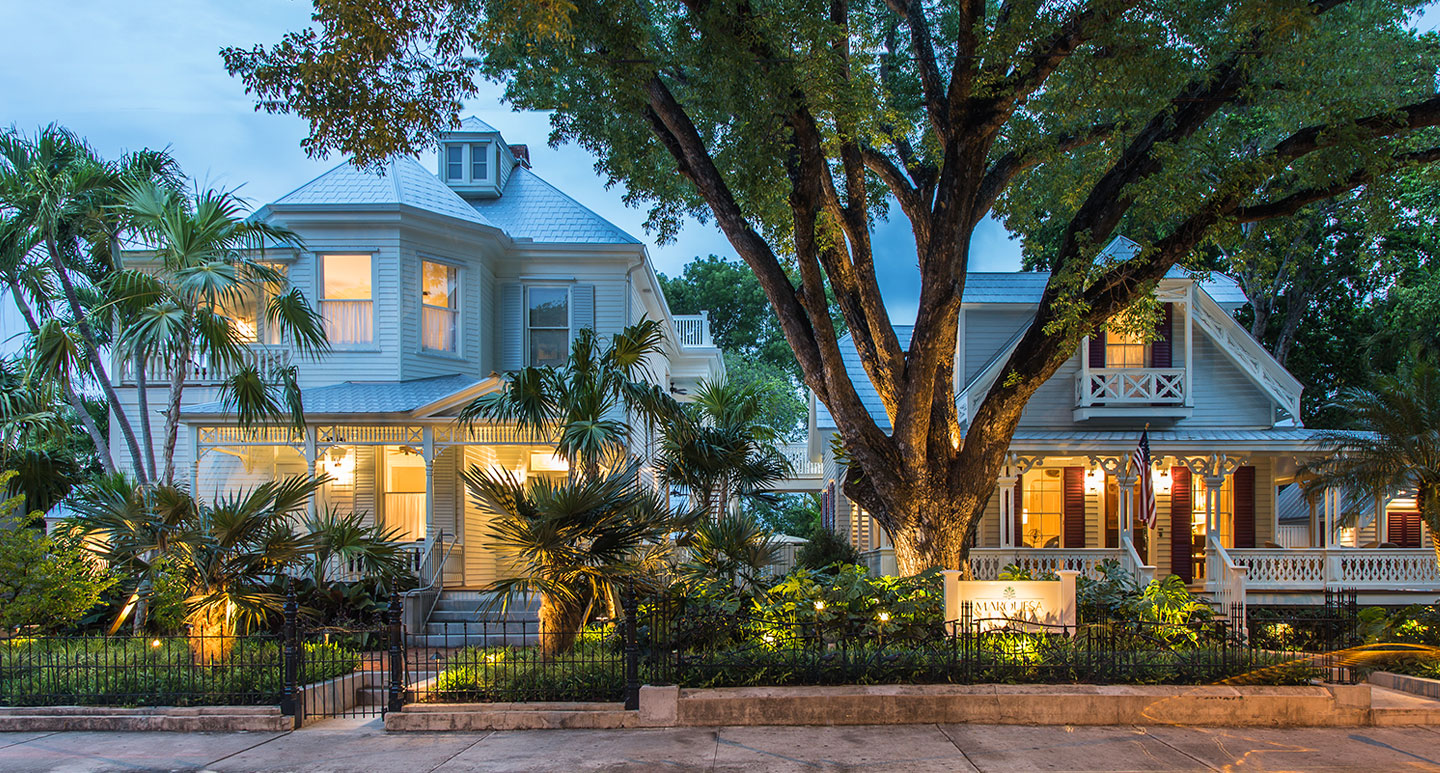 The Marquesa is one block off bustling Duval Street in Key West’s Old Town, just close enough to be convenient, and far enough to serve as a sanctuary from the gift shops and corny tourist traps of the main drag. This block belongs to a different era, and the hotel itself is an assembly of four separate buildings, varying from the rustic charm of the original 1884 conch house to the sleeker (yet still elegant) modern additions.