The Vatican is no stranger to scandal. And one shameful legend in particular epitomizes the religious, political, and economic realities of a 16th-century papacy. Hilary Bockham, expert guide with Context Travel, tells the twisted tale of Leo X and Hanno the elephant.

What do you give the man who has everything? And when I say “everything,” I mean as much as any Western man in the early 1500s could possibly imagine.

In 1513, on becoming pope, Leo was seen rubbing his hands together saying, “God hath given us the papacy. Let us enjoy it.” And he did. Big time. Three facts for context: eating parrots’ tongues was a thing in those days, the pope romped through a seventh of the Vatican treasury in his first papal celebration alone, and he was so overweight that it took two strong men to get him off his bed each morning.

So the King of Portugal needed to think of a pretty special gift if he were to gain favor with this eccentric, the most powerful man in the Christian world. After all, this was a guy slinging gold plates out of windows.

“Hey!” said somebody. “I’ve got a great idea! Why not send him an elephant?”

Why not indeed? Such an animal hadn’t been seen in Rome for literally centuries, and the pope was putting a bit of a menagerie together, so he was bound to be entranced. And entranced he was.

It was a long and arduous trip for the rather small, pale grey elephant named Hanno.

When an elephant digs in his feet in “elephants don’t do boats” style, it’s a tough situation. It took three days to get him onto the boat. Once on, storms had them docking in Tuscany and onto a long, overland trek to Rome. People along the way were so crazy to get a look at Hanno they would destroy anything in their path. Sometimes the only way to abate the destruction was to park the elephant in a chilly piazza all night so that everybody could get a close look.

In Rome, Pope Leo was immediately captivated. Hanno was trained to kneel in his presence and his habit of trumpeting and spraying the delighted Pope with water was, they said, wonderful to see. From 1514 on, they lived happily together.

It’s important for us to remember that in those days the situation of the ordinary family was horrendous. Whereas in ancient Rome around 38 million gallons of fresh water came crashing into the city every day, by the 1500s — as the rich became even richer — there was only one place where the city’s 55,000 people could access fresh water for free. Ordinary people were forced to take their water from the River Tiber, the same place where everybody piled their rubbish and drained their sewage. Disease was rife. And you can imagine what that did for child mortality.

Incidentally, there wasn’t much green stuff around for elephants to eat, so Hanno’s diet was pretty heavy on the carbs. One day, he lay down with a huge, painful belly. His affliction was soon clear: constipation.

The Pope, used to solving his problems with gold, was conditioned to believe it could fix everything. So, not completely out of line with medical practice at that time, the elephant’s medicine was laced with gold. A lot of gold. Perhaps predictably, poor little Hanno died of gold-aggravated constipation.

The Pope was inconsolable, Hanno was buried with pomp and ceremony in the Vatican, Raphael frescoed a plaque, poems and political satire were written, and the whole story went the 16th-century version of viral.

And you can imagine how the story went over with parents who’d watched child after child die without even a cup of fresh water to soothe their fever. In contrast, the Pope had killed his baby with gold.

Martin Luther’s recent letter to Pope Leo X rang in their ears. “The Roman Church has become the most licentious den of thieves, the most shameless of all brothels, the kingdom of sin, death, and hell. It is so bad that even Antichrist himself, if he should come, could think of nothing to add to its wickedness.”

The heady days of the excesses of the Renaissance were heading towards an abrupt end, and everything was about to change forever. Some might say that Hanno played a small, pale grey part in that.

The best way to see the tribute to Pope Leo X’s elephant in the Vatican is with Context Travel’s Arte Vaticana tour, which explores the Vatican Museums’ many world-famous masterpieces. Context Travel offers expert-led cultural and historical walking tours and activities for travelers who love to learn, in over 50 cities around the world. Tablet Plus members receive exclusive discounts on private tours from Context.

Read about The Bounty Beneath the Streets of Rome, also from a Context Travel expert.

Hilary Bockham is an expert in art, literature, and fashion living in Rome. She began her career as an art teacher in England before running her own Exhibition Services company for art galleries and museums throughout Britain. She is also an expert guide with Context Travel.

Continue reading below to learn about the best boutique hotels near Vatican City. 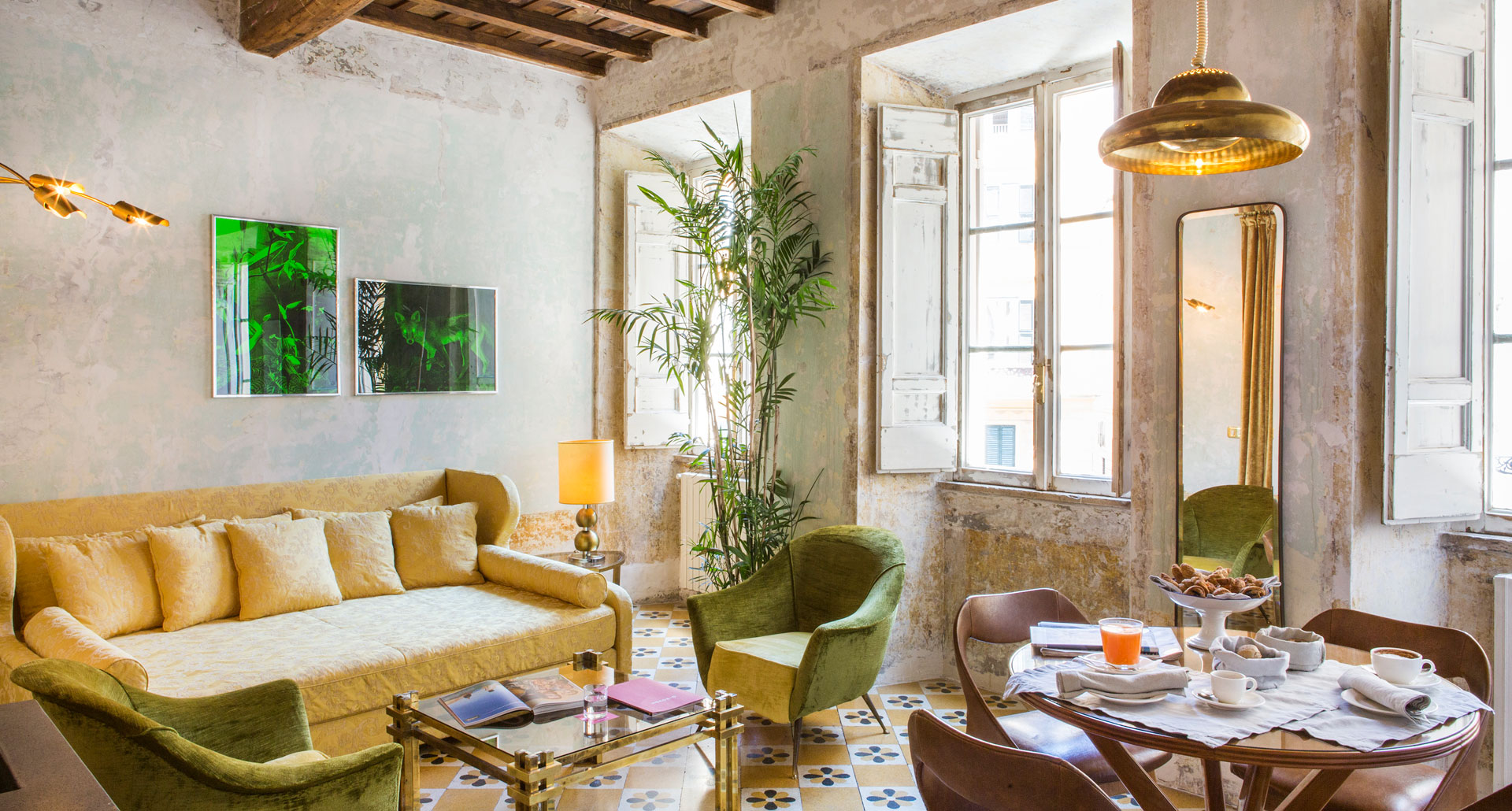 As the old saying goes, you take the rough with the smooth. It means something rather different when the rough in question is G-Rough, the Roman sequel to Venice’s high-design PalazzinaG. Here, aside from some raw textures and finishes, the rough side very rarely comes up — and the concept, outfitting a 17th-century building with Italian design classics from the Thirties, Forties and Fifties, is the very definition of smooth itself. 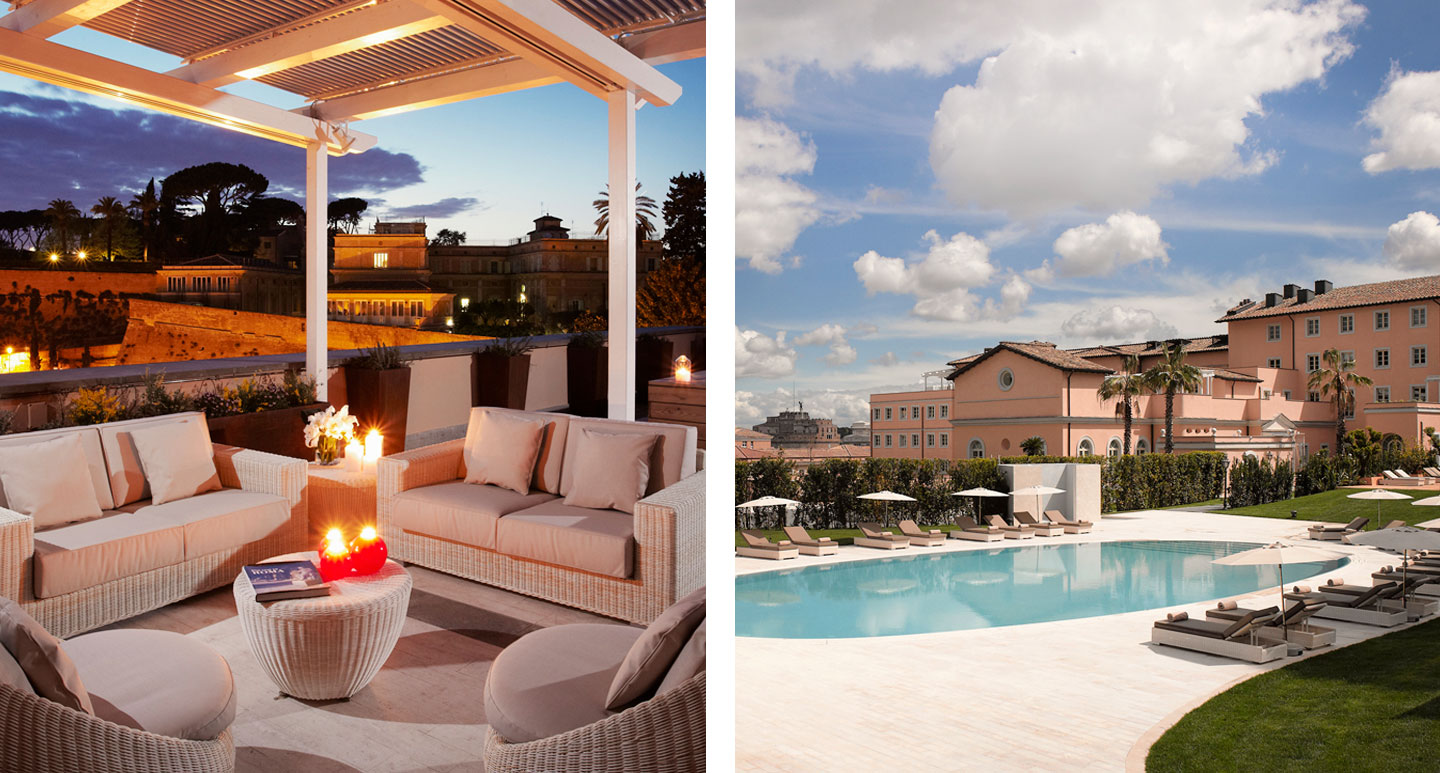 Given the sheer size of the Gran Meliá Rome, a hotel whose gardens and lawns and imposing façades are impressively out of scale with its mere 116 rooms, it’s remarkable that it occupies such prime real estate. Put it this way: the Pope is practically a neighbor. More specifically, it sits on a hill (Gianicolo, Rome’s second highest) above the western bank of the Tiber, a five-minute walk from Vatican City and not much farther from the cobblestone streets of Trastevere. 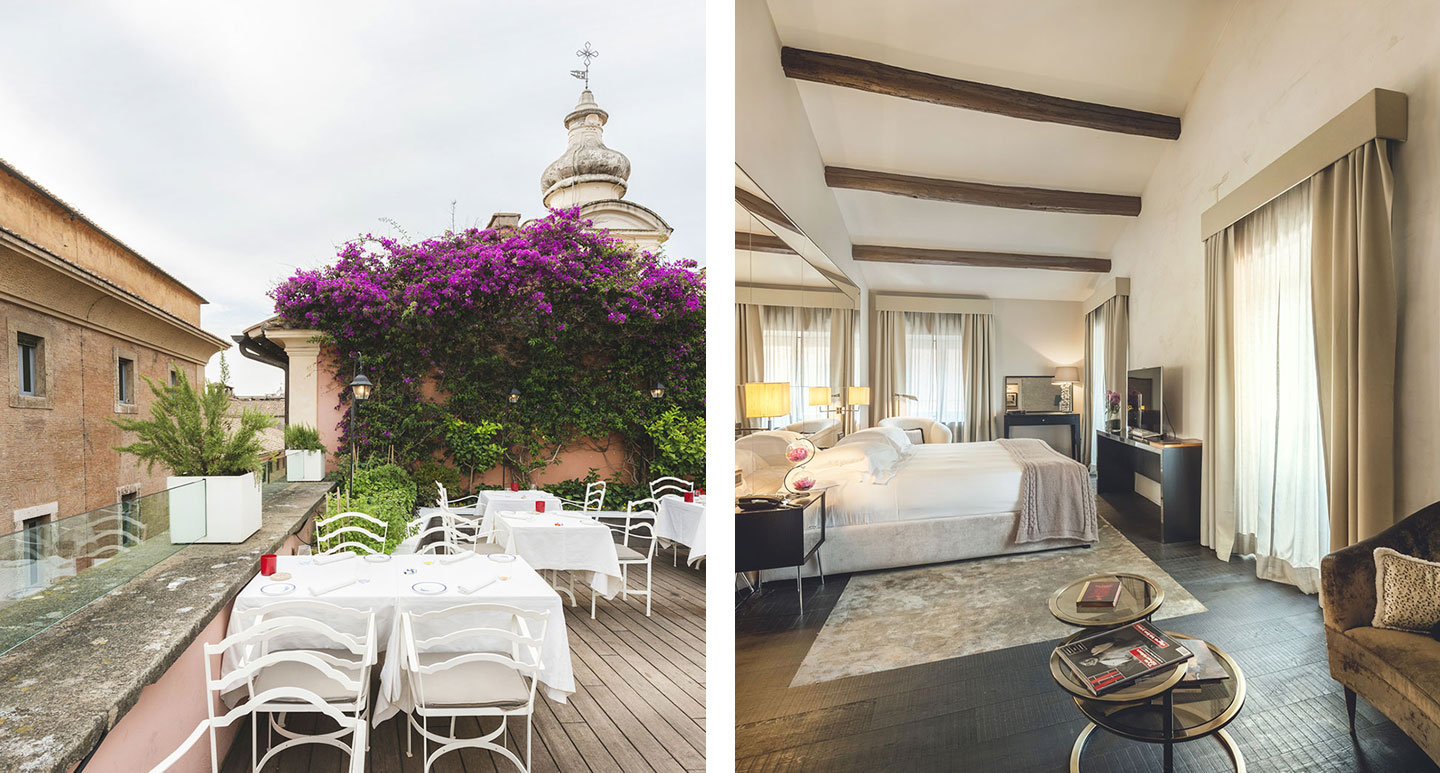 The D.O.M. Hotel Rome is located inside a 17th-century palace on the city’s famed Via Giulia — taking its name from “Deo Optimo Maximo,” a Latin inscription uncovered at the church next door. It’s a welcome reminder that long before the space featured distressed wood floors, original Warhol silkscreens, and craft cocktails, it was a sacred place. (Actually, for years, and until recently, the palace held office space, but let’s focus on the historic highlights.) There’s still a sense of grandeur here, albeit one that’s been carefully updated for design-conscious travelers. 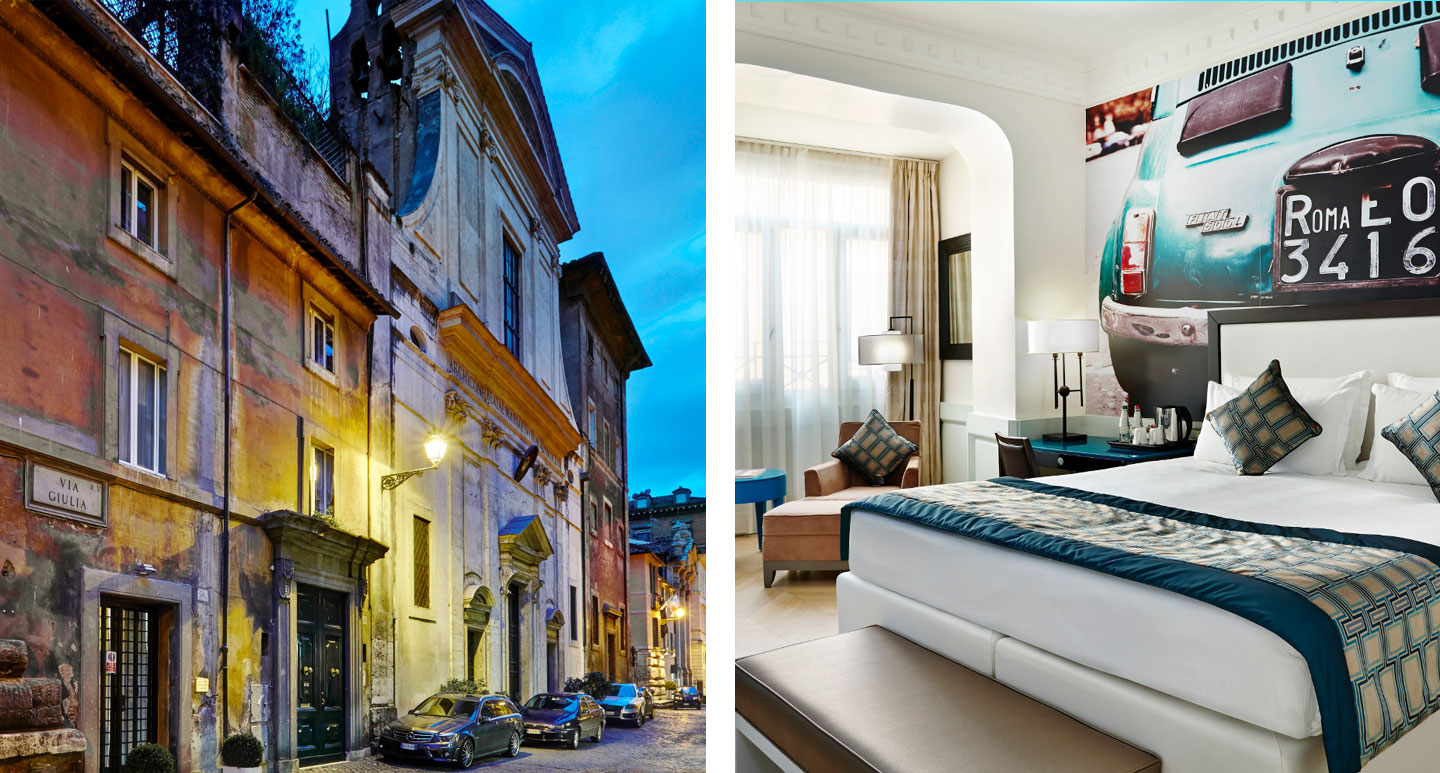 Rome offers up so much history that it’s sometimes hard for the traveler to remember that, antiquity aside, Rome is a completely current and connected city too. It’s a cosmopolitan town fueled more by academia and the film business than by industry, and top-rate hotels usually aim for grandiloquent historical immersion or a hyper-hip design-house theme. The Hotel Indigo Rome – St. George doesn’t really fit into either camp. Instead, it offers up a polished atmosphere that, despite many Scandinavian design touches, almost feels as if one has just checked into a giant Prada handbag. Everything is stitched just so; no garish colors scream at your senses, just calm precision. The St. George marries boutique scale and business-travel efficiency extraordinarily well, a contemporary balancing act exemplified by its bedroom mural aesthetics: Caravaggio in some rooms, the legendary Fiat 500 in others. 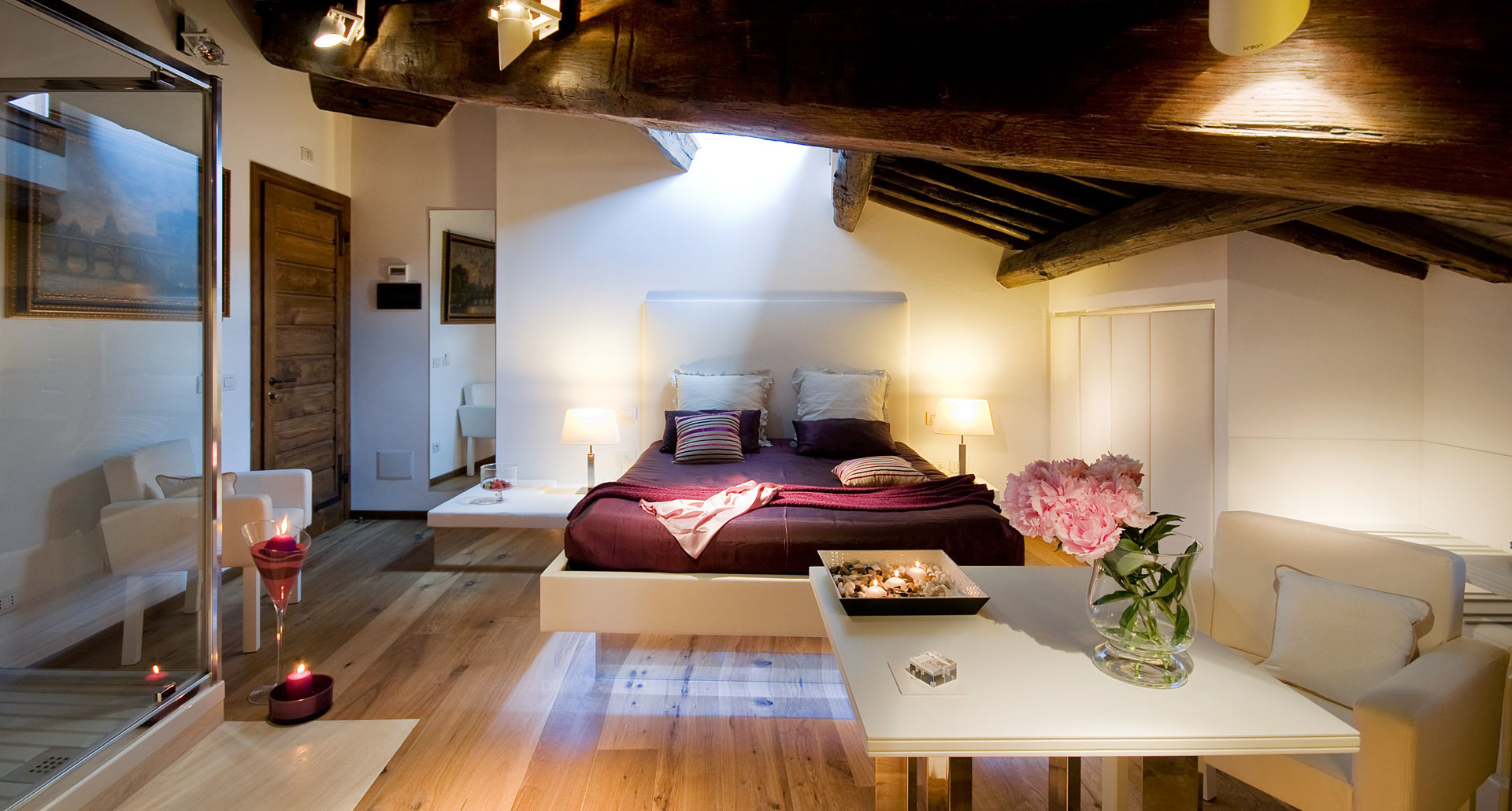 In Rome, perhaps more than anywhere else, an added measure of privacy and seclusion is probably the dearest luxury. In this location just off the Piazza Navona, in a neighborhood which is, even by Roman standards, particularly picturesque and history-steeped, there’s every risk of a hotel becoming an exercise in crowd control. Not so the Gigli d’Oro Suite — this aristocratic residence is divided into just six (strangely singular) suites, and each one, in the current high-end Roman fashion, is an eclectic blend of old and new. 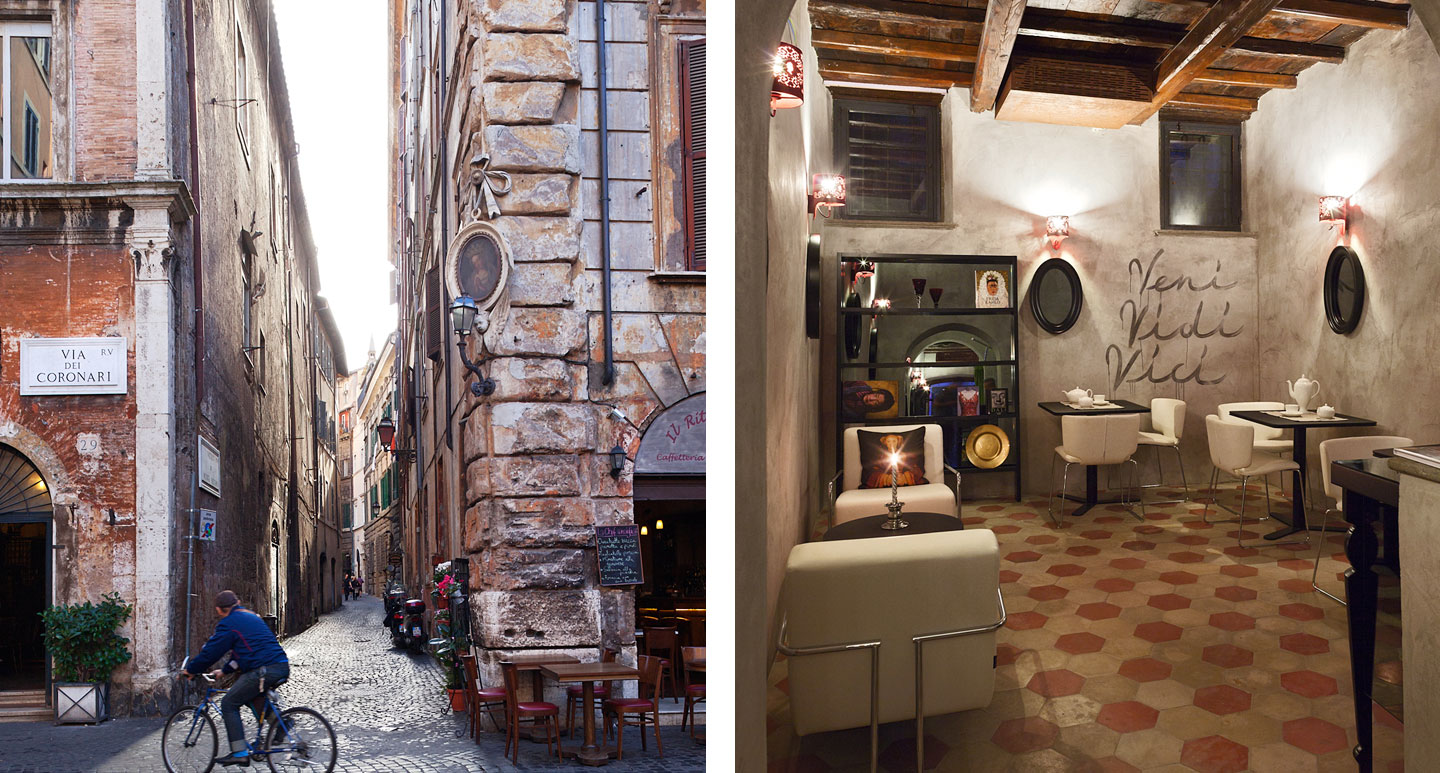 Lacking anything analogous to Uptown vs. Downtown, or a Right or Left Bank, Roman hotels are forced to describe their locations in slightly more granular detail. In the case of Casa de’Coronari, a medieval building converted into a modern six-suite hotel, it’s “close to the Pantheon,” or “a two-minute walk from Piazza Navona.” Within walking distance of quite a lot of what’s worth seeing, in other words. And on a charming cobblestoned street, to boot: far better than being on the busy plaza itself. 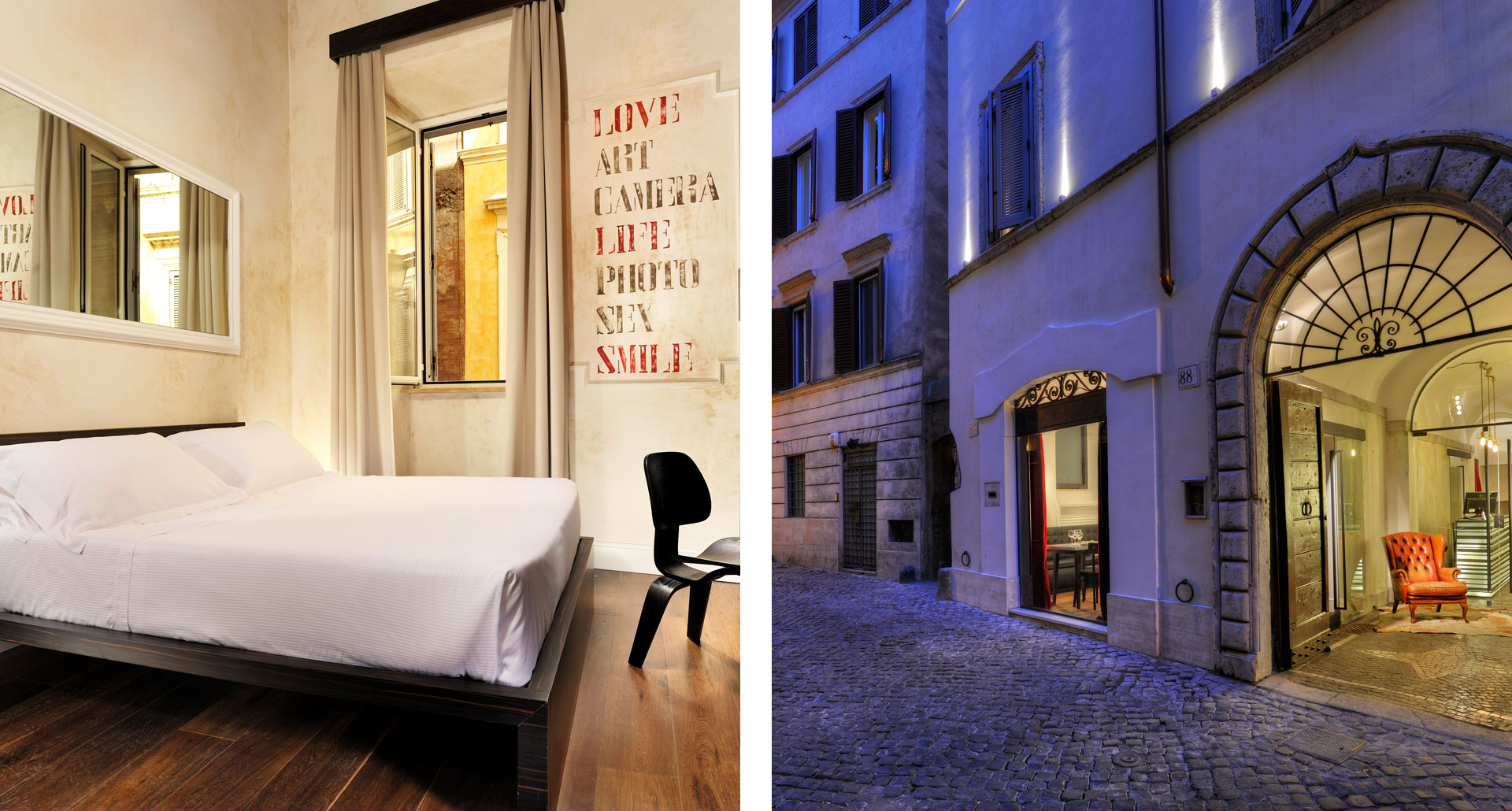 Eye-catching modern design is one thing, but when your business is hospitality, the task still remains to make something warm and welcoming from even the starkest visuals. A model for success in this arena would be the Relais Orso in Rome. Like many hotels in the neighborhood of the Piazza Navona, this boutique is housed in a 17th-century townhouse, steeped in Renaissance history — but one that’s been thoroughly re-imagined, with modernist furnishings and sleek, highly textured surfaces updating the old house’s classic gestures at every turn.

SEE ALL OF OUR HOTELS IN ROME