Cinema can take you where you’ve never been. On the eve of the Academy Awards, here are six classic films with powerful perspectives on the towns where they take place.

I’ve equated cinema with travel ever since I was a teenager, when I first saw Fellini’s 8½. I hadn’t spent much time outside of the United States at that point, and everything in the classic foreign films I was discovering seemed so otherworldly. The inscrutable languages, the unfamiliar cityscapes, the obscure actors, even the strange automobiles — these scenes were all so alien and they all transported me to a different time and place from my own.

It was a form of travel.

In any language, cinema has a way of heightening reality, and we’ve all watched movies that make us want to trade our current situation for whatever fantasy is being portrayed up on the screen. You can even pick the fantasy you most connect with. Some people prefer the colorful Hollywood presented in La La Land, while others lose themselves in Chinatown’s grittier version of L.A.

With the Oscars this weekend, we’re taking a look at six films that offer a unique vision of the location they take place in. It’s almost as good as being there. 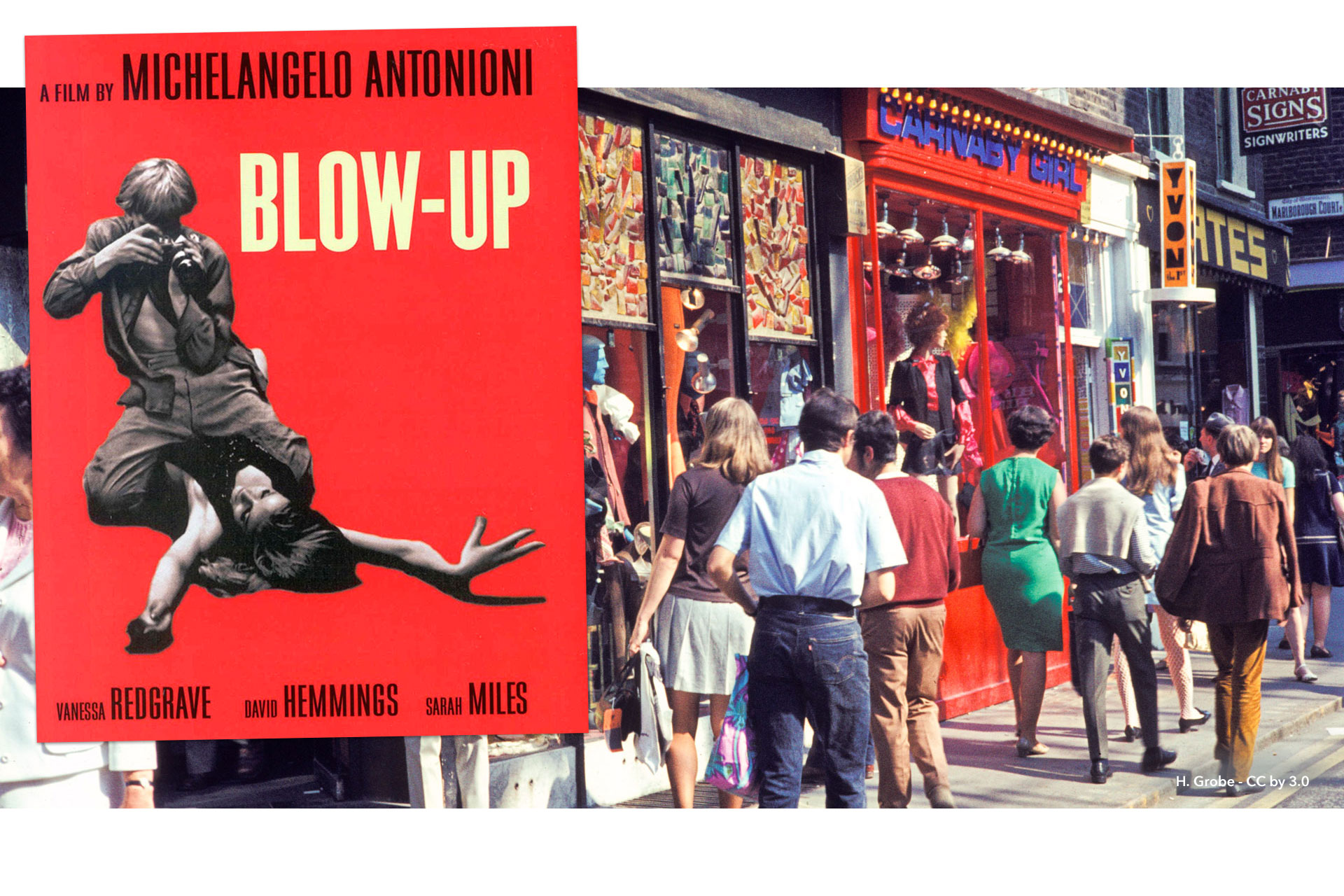 Blow-Up uses the peak of swinging ’60s London as its backdrop, but spends its running time subverting an era that, for many, stands as a stylistic ideal. The film’s story of a jaded fashion photographer who isn’t sure if his camera lens has witnessed a murder or prevented one (or if there was even a murder at all) is an existential landmark: things are how we perceive them, and we’re all unreliable narrators in our own reality. Still, despite the paranoia and malaise that hangs on every scene, London in the mod-heavy mid-sixties looked like a pretty good time, even if our protagonist somehow found himself bored by a rare Yardbirds concert that featured Jimmy Page and Jeff Beck on guitar.

HOTEL CONNECTION:
Speaking of mods, it was during this same period, in 1965, when Terence Conran opened his first Habitat shop in London’s Chelsea neighborhood. You can experience a bit of his current styles, modernism included, with a stay at the Conran-designed Boundary hotel. 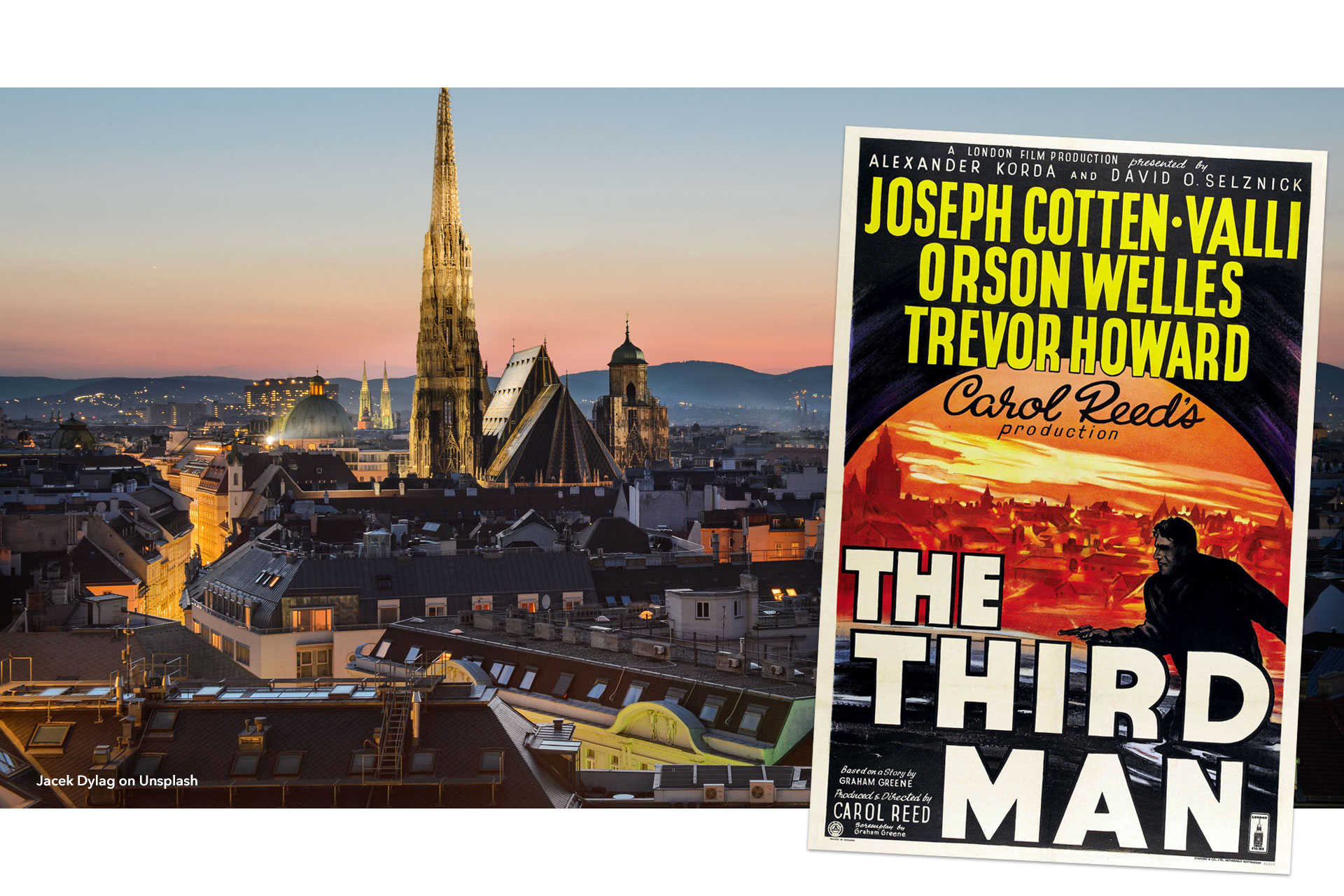 If The Third Man was your only exposure to Europe, you’d think the entire continent was comprised of shadowy doorways on narrow streets and late-night rendezvous at empty cafés — and you’d be enamored by it. The 1949 picture is a true noir, and despite the darkness inherent in that genre, the film uses post-war, allied-occupied Vienna to introduce the exact mix of romance and intrigue that most of us hope to find in every European vacation we take. From Orson Welles’s ferris wheel speech, to the thrilling subterranean chase sequence, to all those dutch angles, The Third Man is filled with iconic moments that continue to influence filmmaking… and our impressions of the Austrian capital.

HOTEL CONNECTION:
The monumental exterior of Hotel Sans Souci is true to its 1872 roots, but inside, the Yoo design group has added a dose of whimsy that cuts through the building’s heaviness in the same way The Third Man’s bouncy zither theme offers a counterpoint to its otherwise gloomy mood. 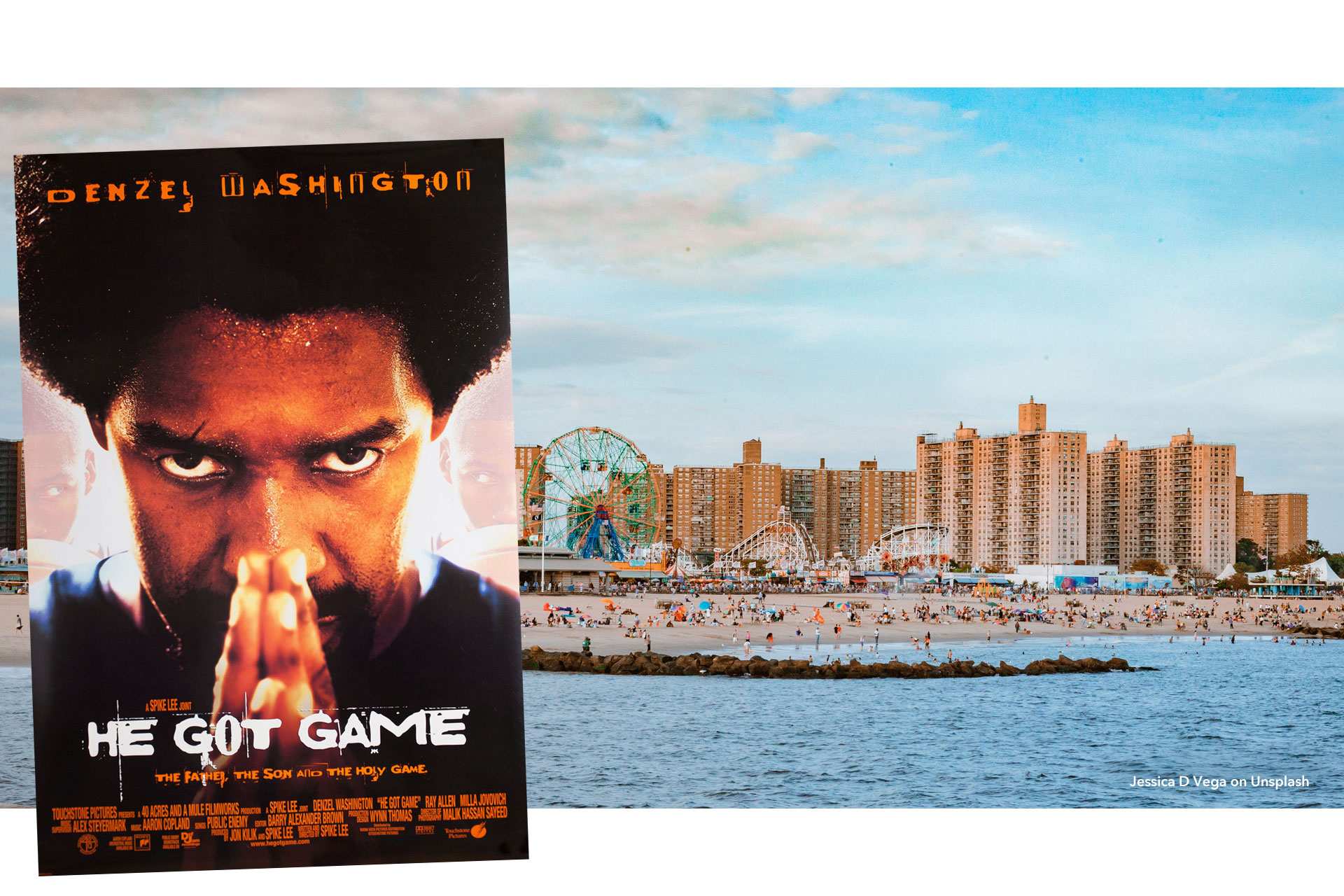 Each frame in a Spike Lee joint practically drips with detail. In his breakout film, Do the Right Thing, you can almost feel the midsummer Brooklyn heat as it bounces off of brownstone steps and oozes out of pizzeria ovens. In He Got Game, he trades a burning Bed-Stuy for an oversaturated Coney Island as he follows a high school basketball phenom trying to keep his head on straight while he decides which college to attend. Safe to say that no one has ever shot Brooklyn or basketball with such a loving eye, and it’s hard to walk away from the film not wanting to immediately go practice turn-around jumpers at your local playground or take a romantic ride on Coney’s famous Wonder Wheel.

HOTEL CONNECTION:
While Spike wasn’t the first director from Brooklyn, his films about the borough will be the ones against which all future Brooklyn-based films will be measured. This is true also of Williamsburg’s Wythe Hotel — it’s not the first boutique hotel to open in the uber-trendy neighborhood, but it has set the standard for all those to come. 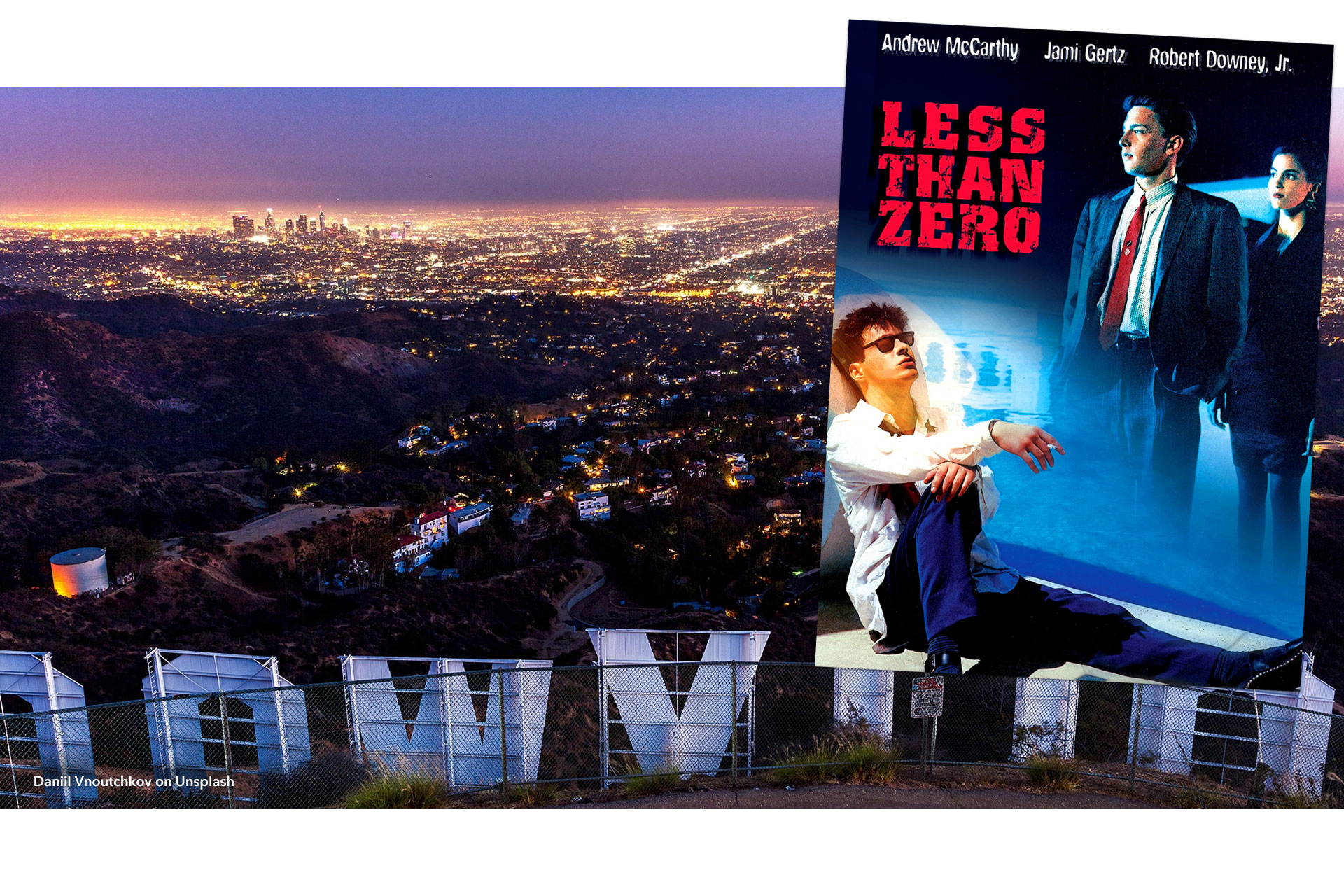 Aside from some vintage James Spader and Robert Downey Jr.’s heartbreaking performance as a doomed drug addict, Less Than Zero isn’t a particularly good movie — especially considering the nihilistic realism of the excellent source material (Bret Easton Ellis’ debut novel of the same name) — but it does have an incredible sense of place. The film is a time capsule of ostentatious wealth and privileged youth in 1980s Los Angeles, with all the questionable design and sartorial choices that entails. The action largely takes place over winter holiday break, allowing for the combination of postmodern architecture and white plastic Christmas trees. Superficial, yet satisfying.

HOTEL CONNECTION:
The old “Riot Hyatt” on Sunset, site of rock-star debauchery that would make the Less Than Zero house parties blush, is now the Andaz West Hollywood. The hotel is all cleaned up, and the sleek and sparse new interiors bring to mind the luxurious homes on display in Marek Kanievska’s film. 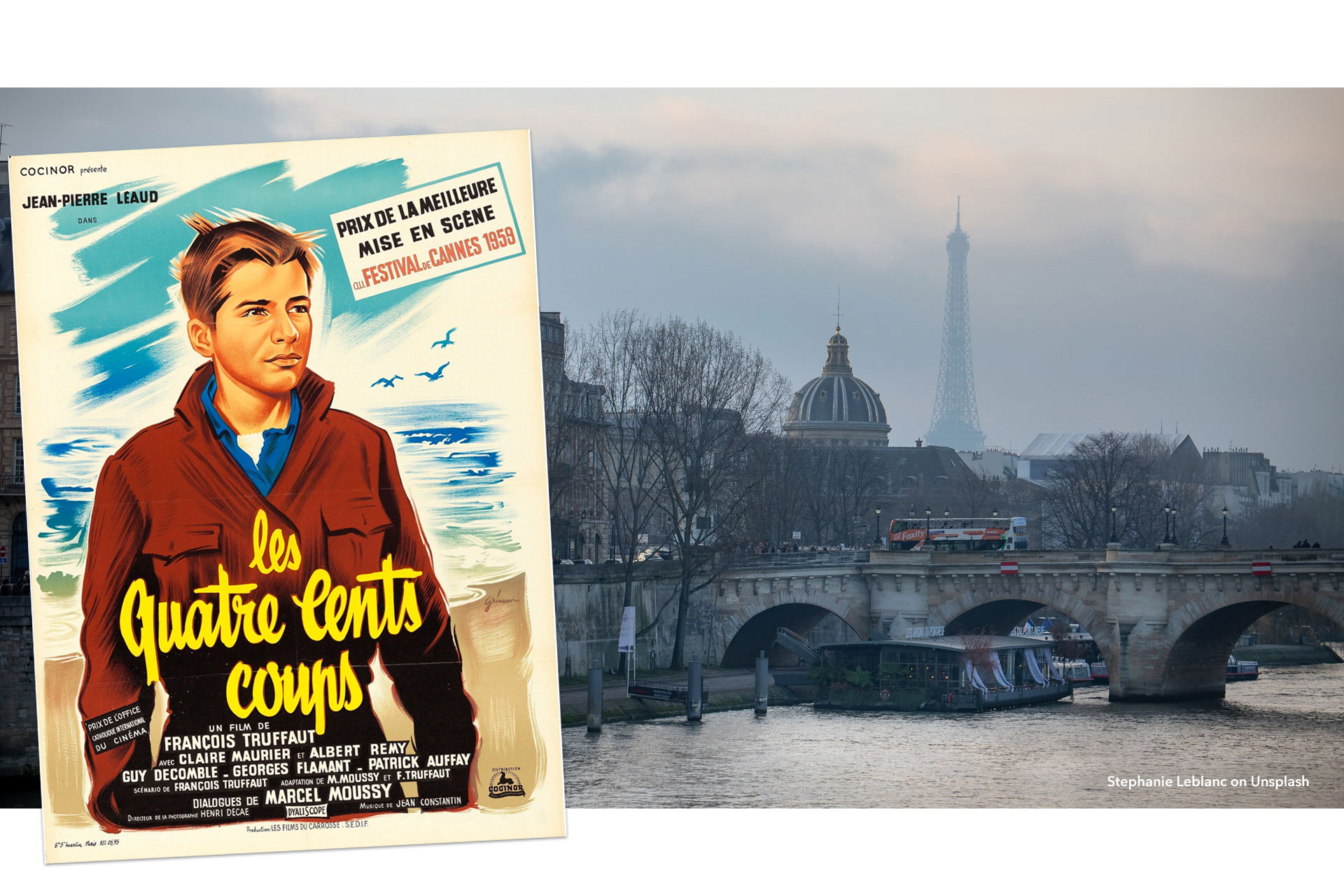 In a nice bit of synergy with our new parent company, one of the plot lines of The 400 Blows deals with a mischievous son who steals his father’s beloved Michelin Guide. The 1959 François Truffaut picture practically reinvented the coming-of-age film with its honest and unsentimental portrayal of a 14-year-old boy testing life’s boundaries in a big city. The city, in this case, is Paris, and the child experiences it the way children often do: running around corners and streaking down steps, bounding in and out of doorways, wreaking minor havoc in alleys and schoolyards, and imagining grand plans for the future in tiny attic bedrooms — all under the watchful eye of the Tour Eiffel.

HOTEL CONNECTION:
My backup choice for a film about Paris was Jules et Jim, so it’s only natural that I reserve some words here for the Jules & Jim hotel. While it doesn’t share any official connection with Truffaut’s 1962 masterpiece, the 23-room boutique in the Marais does share a passion for art with its guests via a gallery space just off the main entrance. 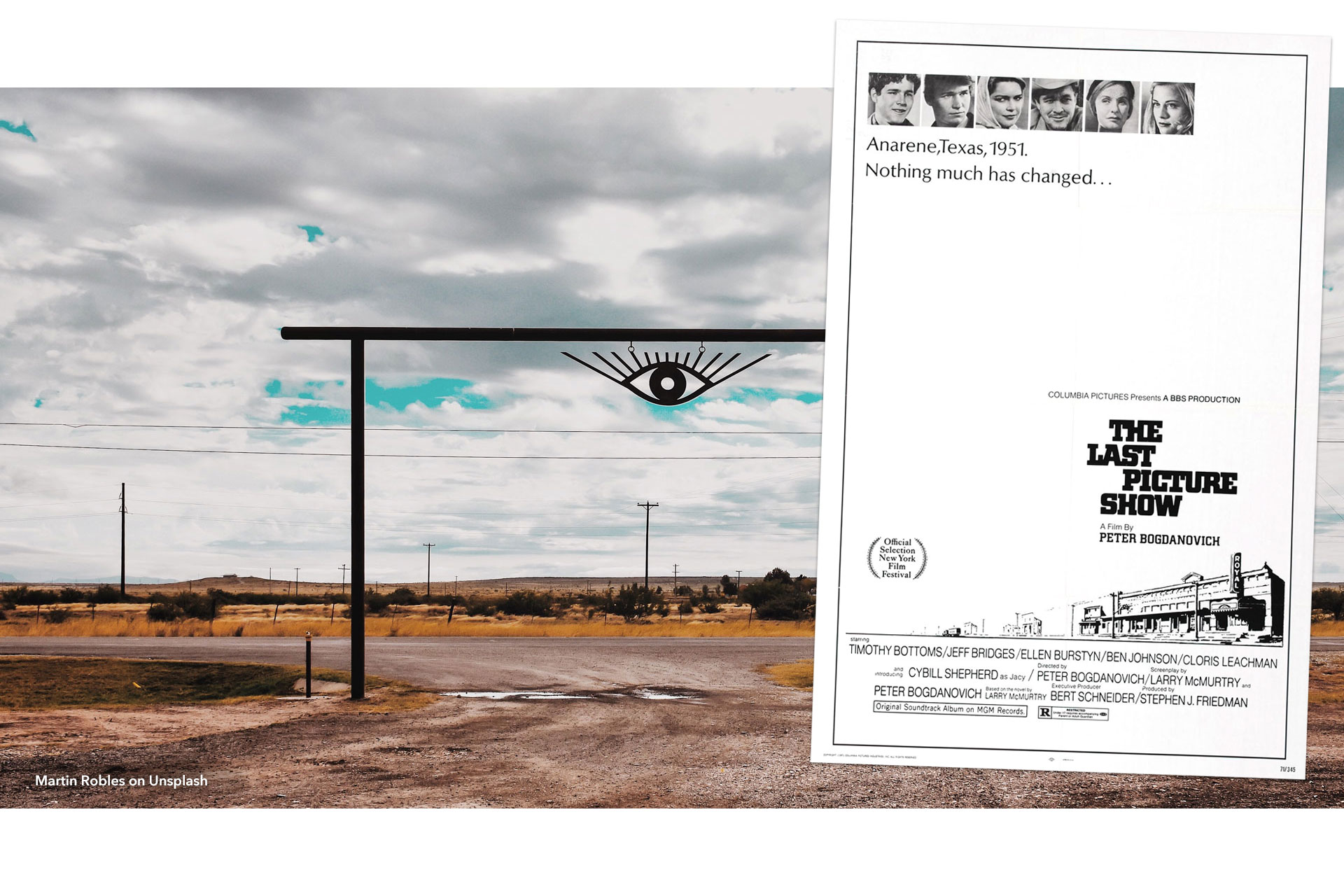 One-stoplight towns in the American midwest bring to mind strong images of a Rockwellian existence where everything is simple and true. The allure is powerful, and 1971’s The Last Picture Show (filmed in nearby Archer City) should be required viewing for anyone who is considering fleeing the city for a slower day-to-day in the country. Not because the film shatters any illusions, but because of the balance with which it both celebrates and condemns rural, small-town life. In these towns, the picture suggests, each real experience is more meaningful because each real opportunity is more infrequent — and your next one is less likely to come along than a tumbleweed down main street.

HOTEL CONNECTION:
If you know Tablet at all, you know that there’s currently only one choice we’d consider for a rural Texas accommodation, and that’s El Cosmico. I’m certain I had The Last Picture Show somewhere in the back of my mind when I wrote about the hotel and my complicated journey to Marfa.

What films have taken you to another time and place? Let us know in the comments below.