Our recommendations for where you should consider traveling in 2019.

One of the biggest reasons that people travel is for communion with the past. Life is full of mystery, but when we witness the remains of an ancient civilization or the eternal march of nature we know that at least one thing is certain: we are here now. It’s a gift to be alive and to see those monumental sights, and that’s the inspiration for our 2019 travel recommendations. These seven destinations have humbled travelers for many years, and they’re deserving of a visit during the upcoming one as well. 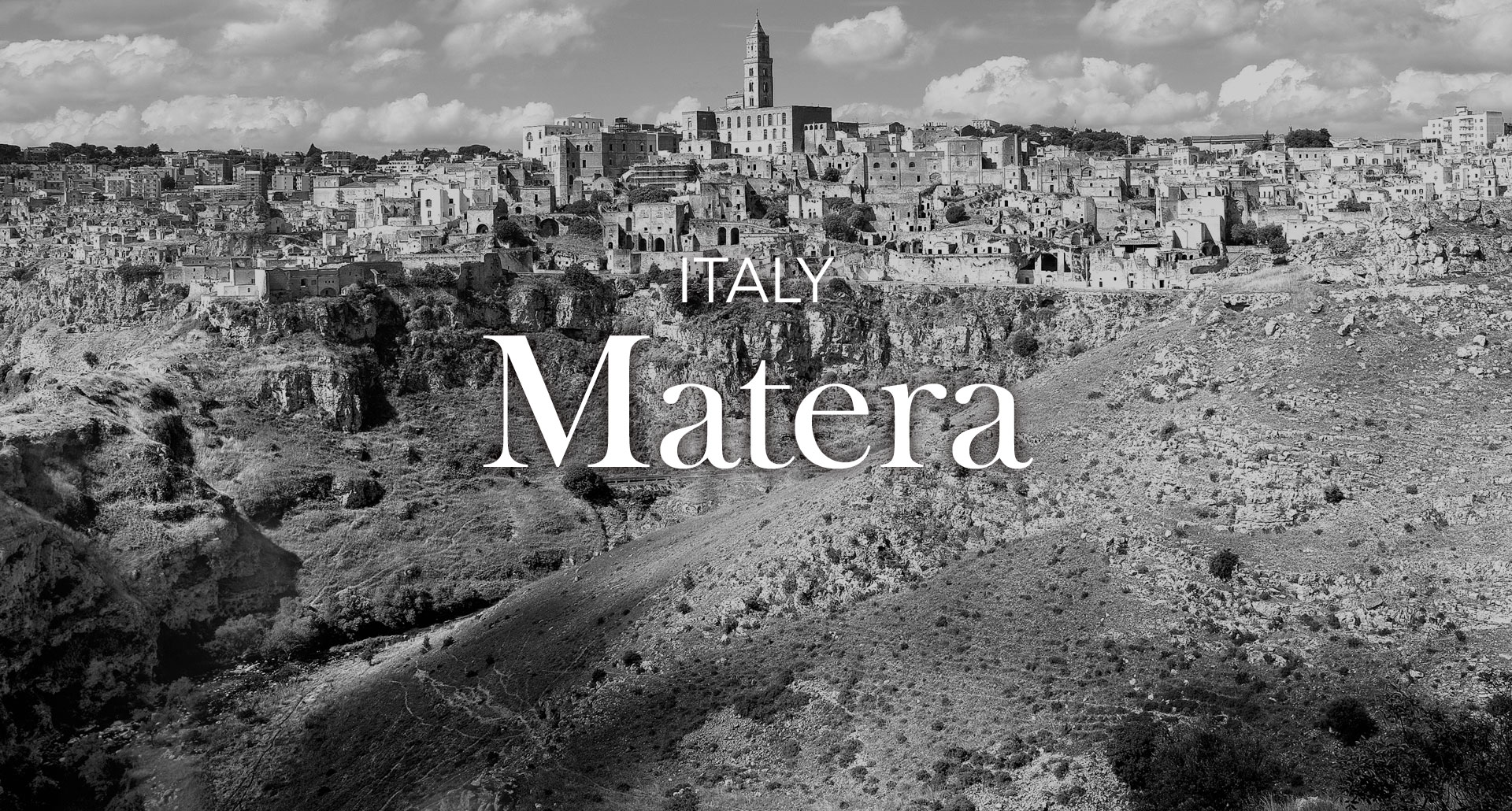 A city of 60,000, isolated in the mountainous Basilicata region. Distinguished hotels, historic churches, hip restaurants built right into the limestone. And it’s that part, the cave district, that really stands out and gives truth to Matera’s oft-heard claim to be the third-oldest continually inhabited settlement in the world. But it wasn’t long ago, in 1952, that those same ancient caves were so known for dilapidation that inhabitants were forced to relocate. It wasn’t until 1986 that the government began to pay for their restoration, as the younger generation led the charge to revamp and refurbish what they rightfully recognized as a global treasure. 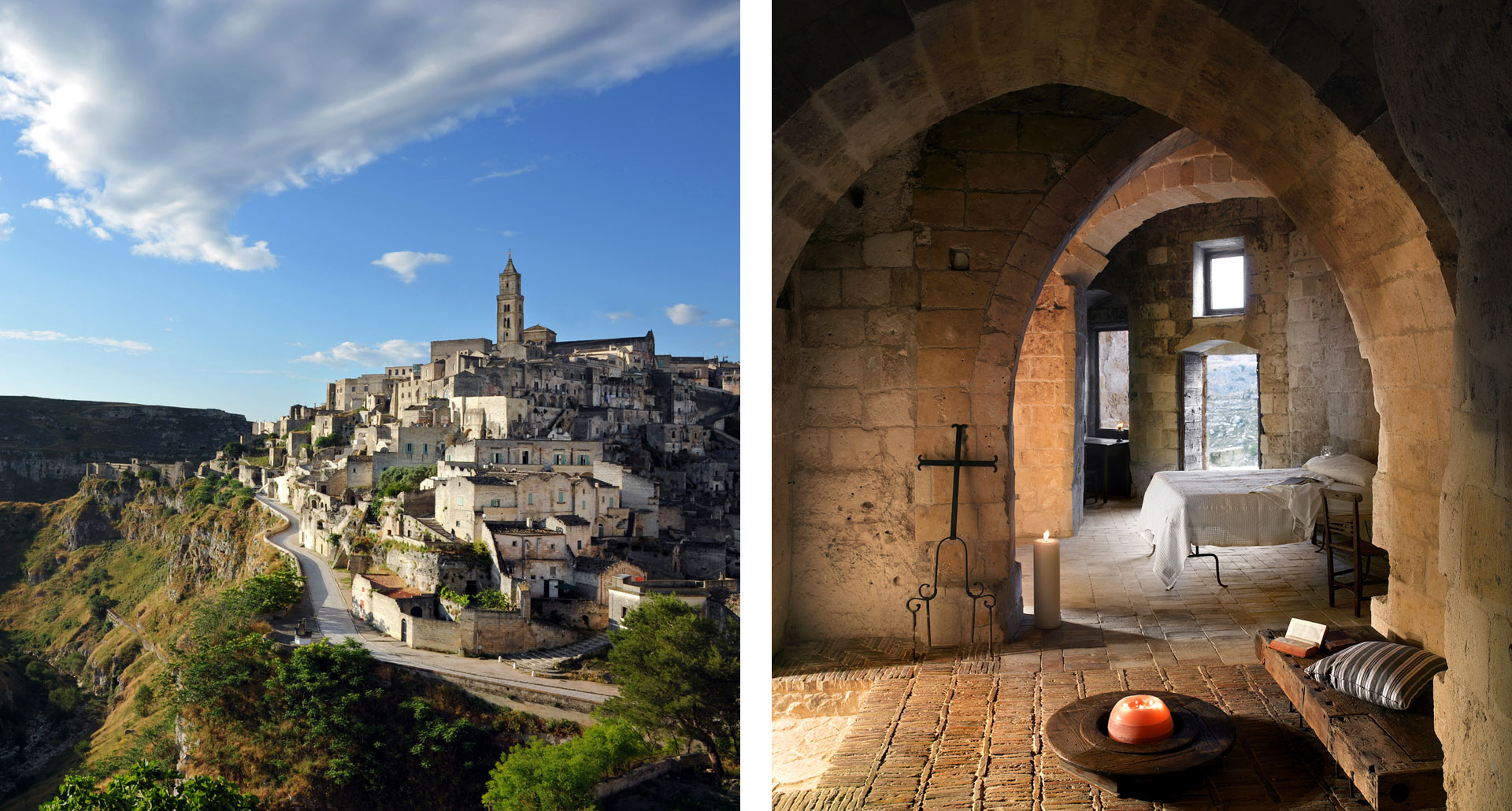 Matera isn’t as used to droves of tourists as the other hot spots in Italy. But in 2019 the historic town takes its star turn. A selection as one of two EU Capitals of Culture for the year means a guaranteed influx of travelers descending upon the city for events and workshops. A ticket for the 2019 festivities lasts a full year.

Accommodations in Matera are a question of how close you want stay to the sassi, the caves. Palazzo Margherita is a nine-suite hotel in the Province of Matera, not the city (which isn’t exactly a sacrifice when you’re this close to the beaches of the Mediterranean). Palazzo Gattini Luxury Hotel overlooks the caves, built with the region’s ancient stone. Then there’s Sextantio Le Grotte Della Civita, a hotel whose rooms are scattered around the sassi themselves — and that means cave rooms, but ones of pure luxury. 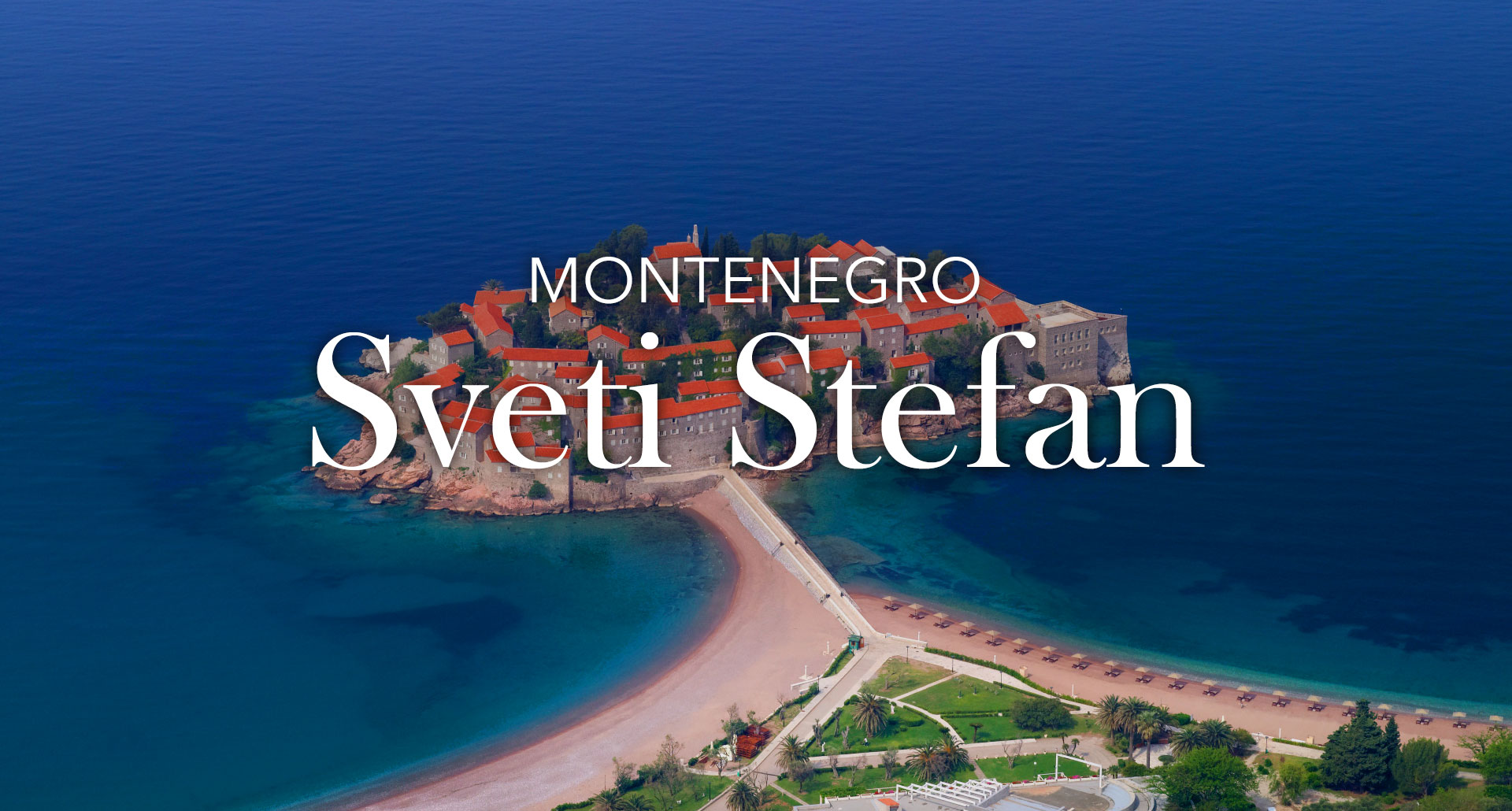 A 15th-century fishing village. Restored medieval homes. One of the most exclusive, luxurious places in the world. Sveti Stefan is photogenic, to say the least. You’ve probably seen it, the aerial photo of that tiny drop of land in the ocean, peppered with red-roofed homes and connected to the mainland by a fragile-looking isthmus. Before it was the property of Aman, it was still an island resort, one frequently associated with high-profile visits from the likes of Sophia Loren, Orson Welles, and Elizabeth Taylor, glamorous guests who one can easily imagine enjoying the serene Adriatic Sea and ancient cottages. 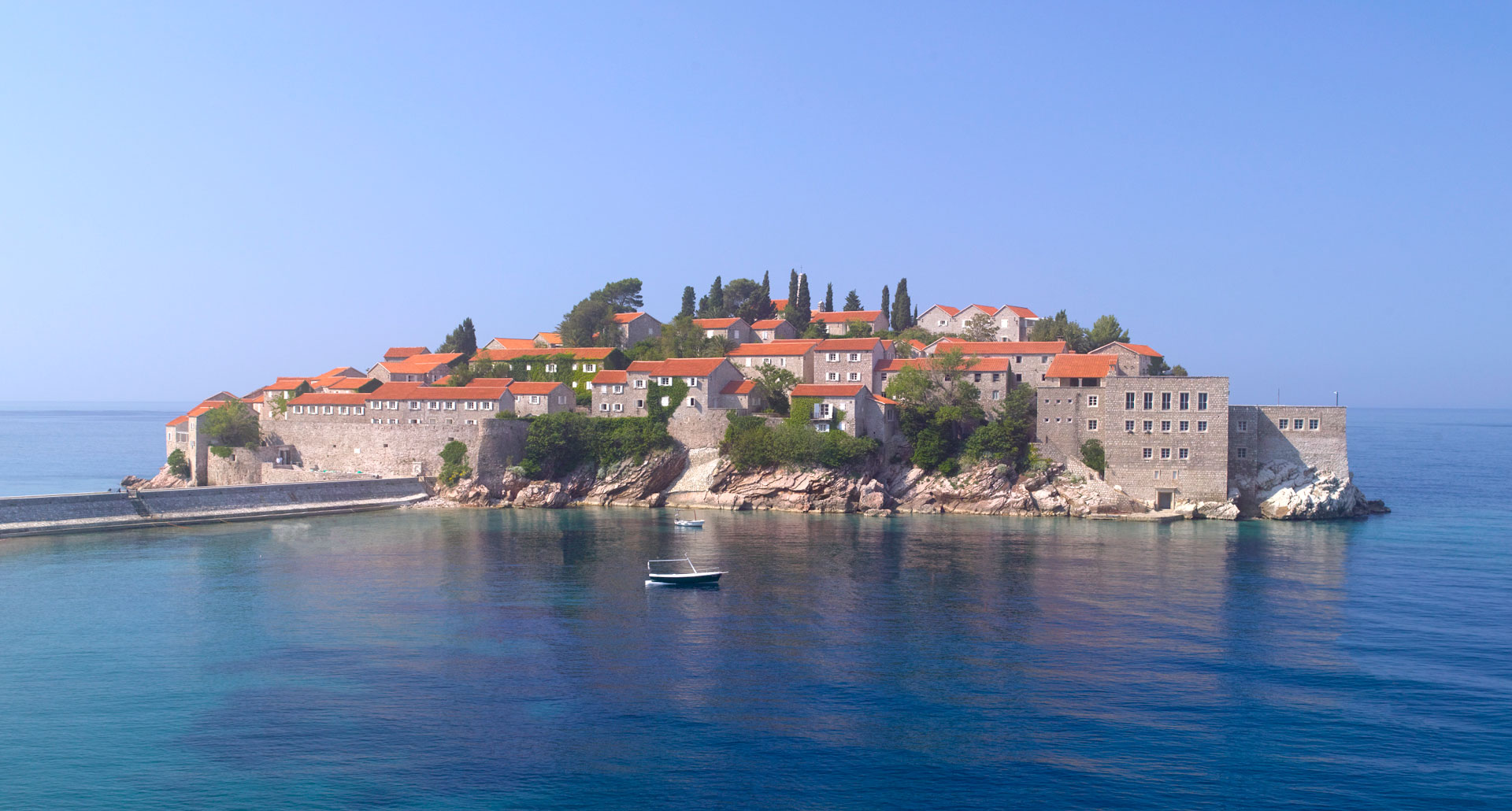 This is the rarefied air, and if staying staying at an Aman isn’t in your 2019 budget, the place is a legitimate destination just to gaze upon from across the way, with restaurants on the island open to non-guests for a fee. The area’s an hour’s drive from the seaside Montenegrin towns of Tivat and Kotor, not too shabby destinations themselves.

The entire island, with its medieval history and restored architecture, belongs exclusively to Aman, the proprietors having filled the stone cottages with their typically luxe comforts. You can get on the island with a restaurant reservation, but there’s no talking your way into an extended visit if you’re not a guest. The island is open in the summer, while Aman’s Villa Milocer on the mainland remains open year-round. 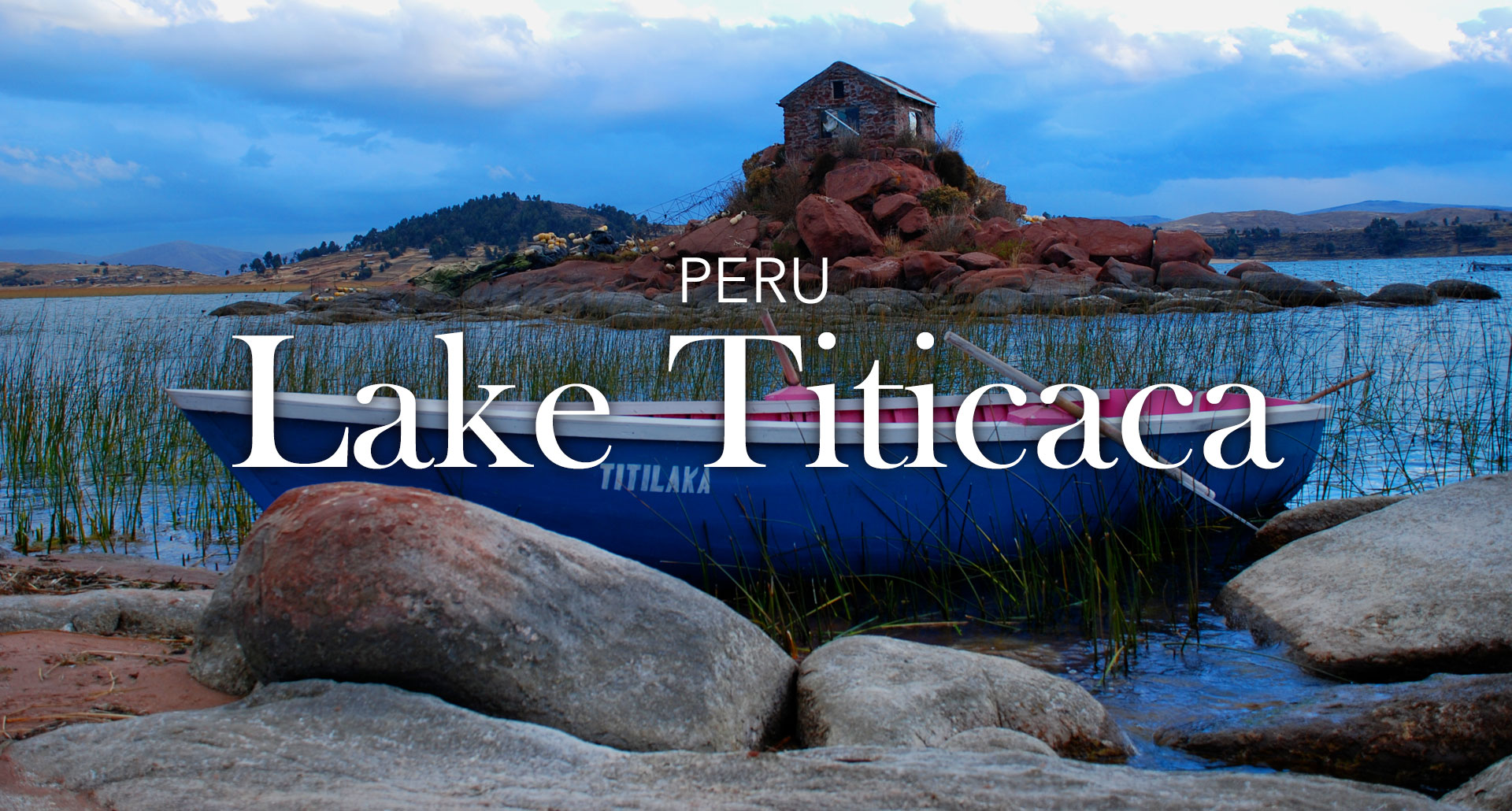 3,200 square miles of blue water. Incan ruins. “The birthplace of the sun.” Lake Titicaca is not a normal lake. It’s massive, spanning the border between Bolivia and Peru, with ancient ruins and vibrant islands peppered throughout. Inarguably some of the most unique are the dozens of small “floating” islands constructed by the Uros people out of totora reeds. They’re in need of constant reinforcement, partly because of the routine rotting of the building material, and likely not helped by tourist traffic — the “Disneyfication” of the culture is an ongoing topic of debate among locals and travelers alike, who flock to the Uros Islands to take photos or experience a homestay. 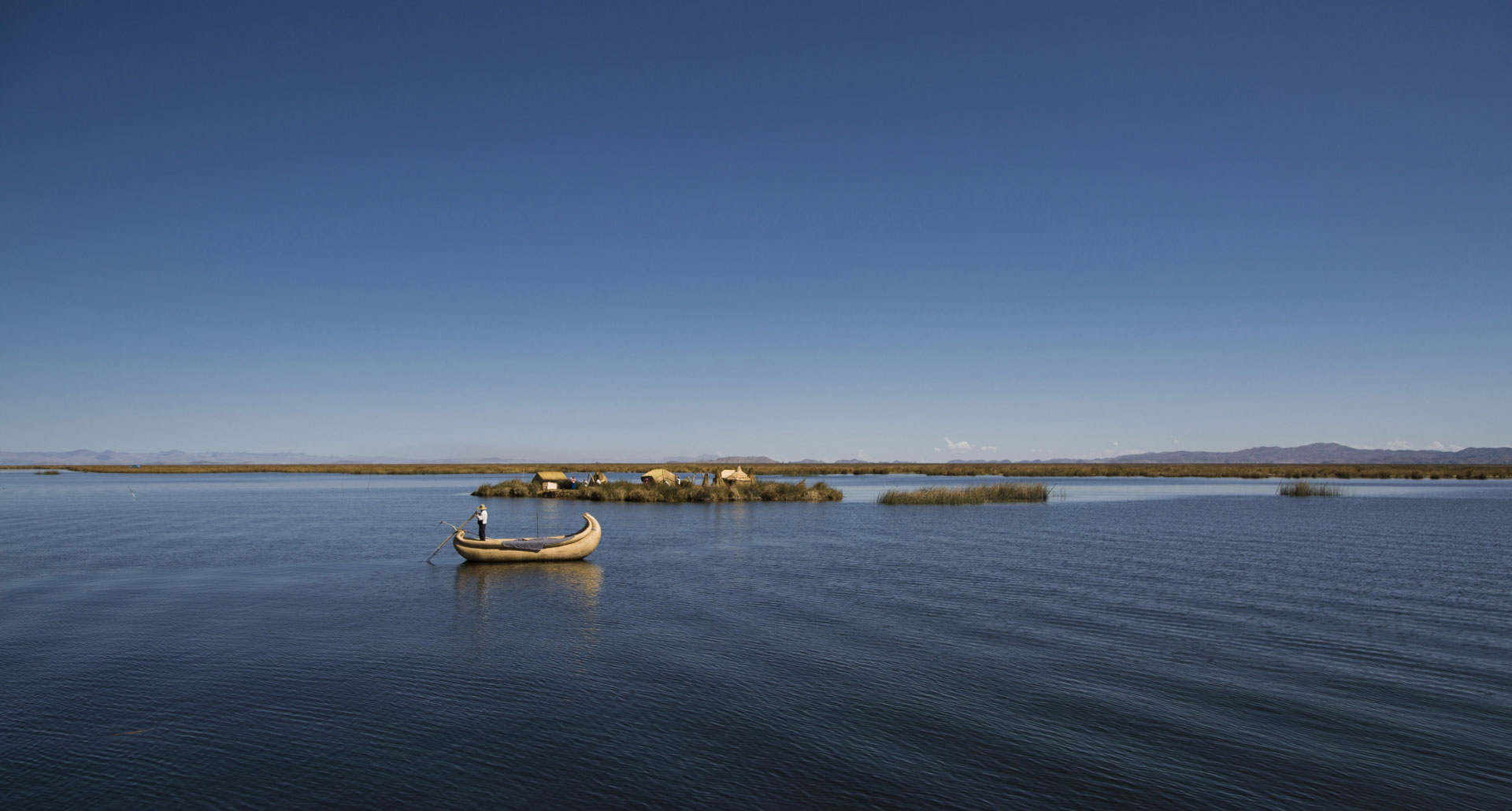 Then there are the ruins. Isla del Sol, on the Bolivian side, and Isla de Taquile, on the Peruvian, are the settings for important Inca legends and the sites of tangible ruins, both of the Inca and cultures predating them. In fact, ten years ago a team of experts discovered something of a hidden underwater city dating back to multiple pre-Incan civilizations. An underwater museum is now in the works, set to open soon. But there’s plenty to see besides, and with the new Belmond Andean Explorer train already making travel easier, we think it’s worth beating what could be a rush to Titicaca the following year.

On the Peruvian side, Titilaka provides both unfettered views of the deep blue water of Lake Titicaca and customized archaeological tours of the region. If you’re committed to seeing the lake from all sides (Bolivia and Peru), Copacabana should be your next stop.

The Chisos mountains, the Chihuahuan desert, the Rio Grande river. Bright views of the night sky. Adorable wild piggies. Big Bend National Park, deep in southern Texas on the border with Mexico, has everything. And yet, while other American parks like Yellowstone and Yosemite set records with over four million visitors a year, Big Bend — one of the least visited in the nation — averages around just 400,000. Uncharitable travelers would say that’s because it’s in the middle of nowhere. Wiser ones relish that isolation. Here, driving is just another thing to do, on from a place like the Santa Elena Canyon to the ghost town of Terlingua, passing coyotes, deer, 450 species of birds, and those aforementioned javelinas (they’re not really pigs).

One of the great stargazing capitals of the world, and paradise for hikers and campers, Big Bend even has a natural hot spring, hemmed in by the remains of an early 20th–century bathhouse at the border of the Rio Grande. Which brings us to the most tenuous draw of Big Bend, at least, tenuous in the political landscape of 2019. At the Boquillas Crossing, visitors can take a five-dollar rowboat into Mexico for a little food and sightseeing. As of now, the NPS notes this is still an option.

A brisk hour-and-a-half drive away is the town of Marfa, whose rising popularity has led to increased interest in Big Bend. In Marfa you’ll find one of our favorite hotels, El Cosmico, where you can get a head start on your camping trip with their yurts, tents, teepees or vintage Fifties trailers. At El Cosmico, the latter are essentially the luxury suites. 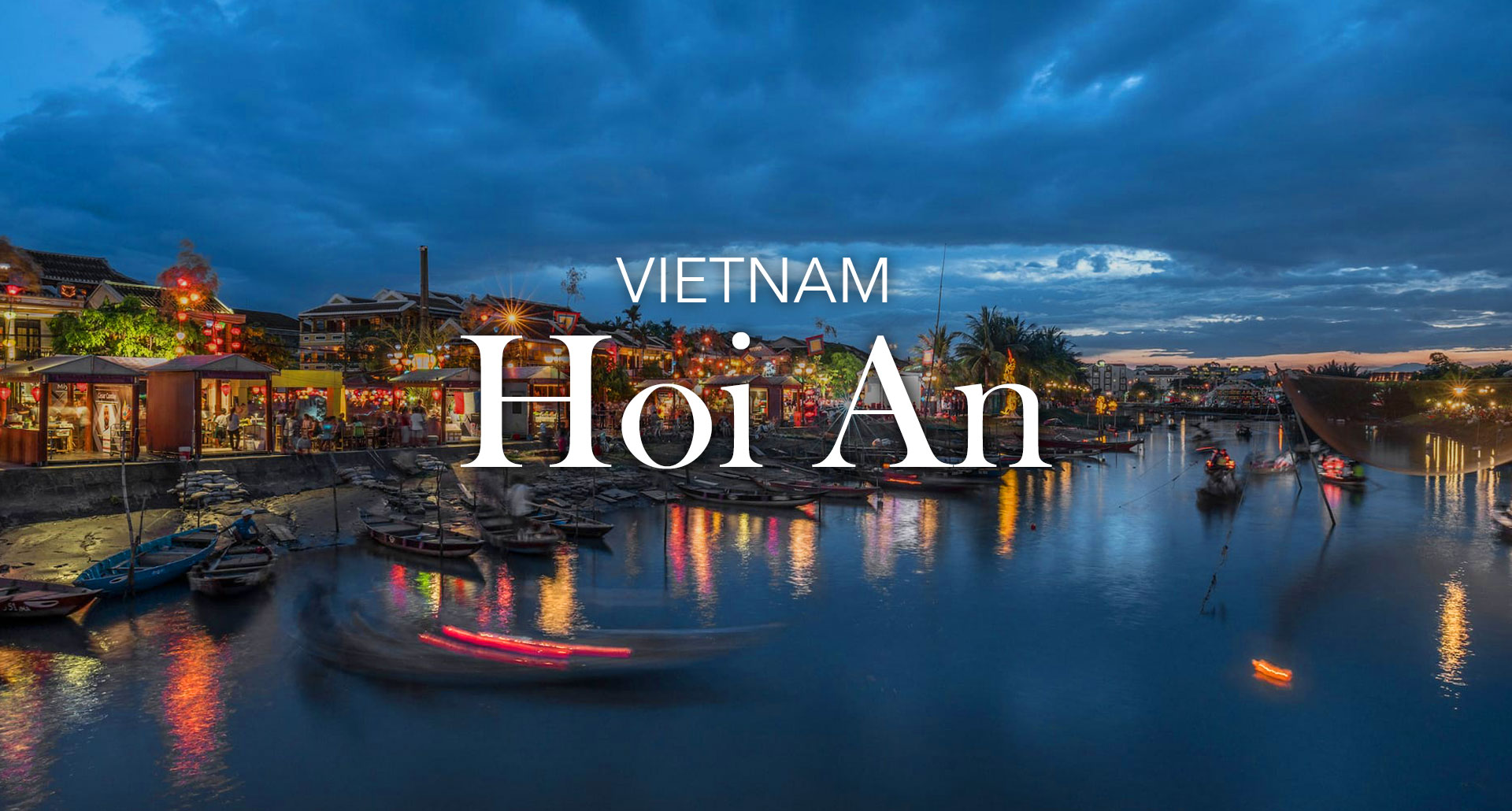 A white sand, palm-lined beach. A riverside illuminated by lanterns. An ancient town named, in fact, Ancient Town. You could mistake Hoi An for another waterfront getaway. After all, the beautiful beaches are certainly here. But that’s not the whole story. Largely due to its decline as a trade post in the late 1800s, much of Hoi An’s old heritage survived the 20th-century war in ways a city like Hue did not. A short ride from the resorts and you’ll find Hoi An Ancient Town, a place UNESCO hailed for its “exceptionally well-preserved” architecture, with Japanese, Chinese, and European influences alike dating from the 15th to 19th centuries. The hundreds of wooden-framed homes, the Japanese bridge with its pagoda — all of it stands in the original layout of the town. 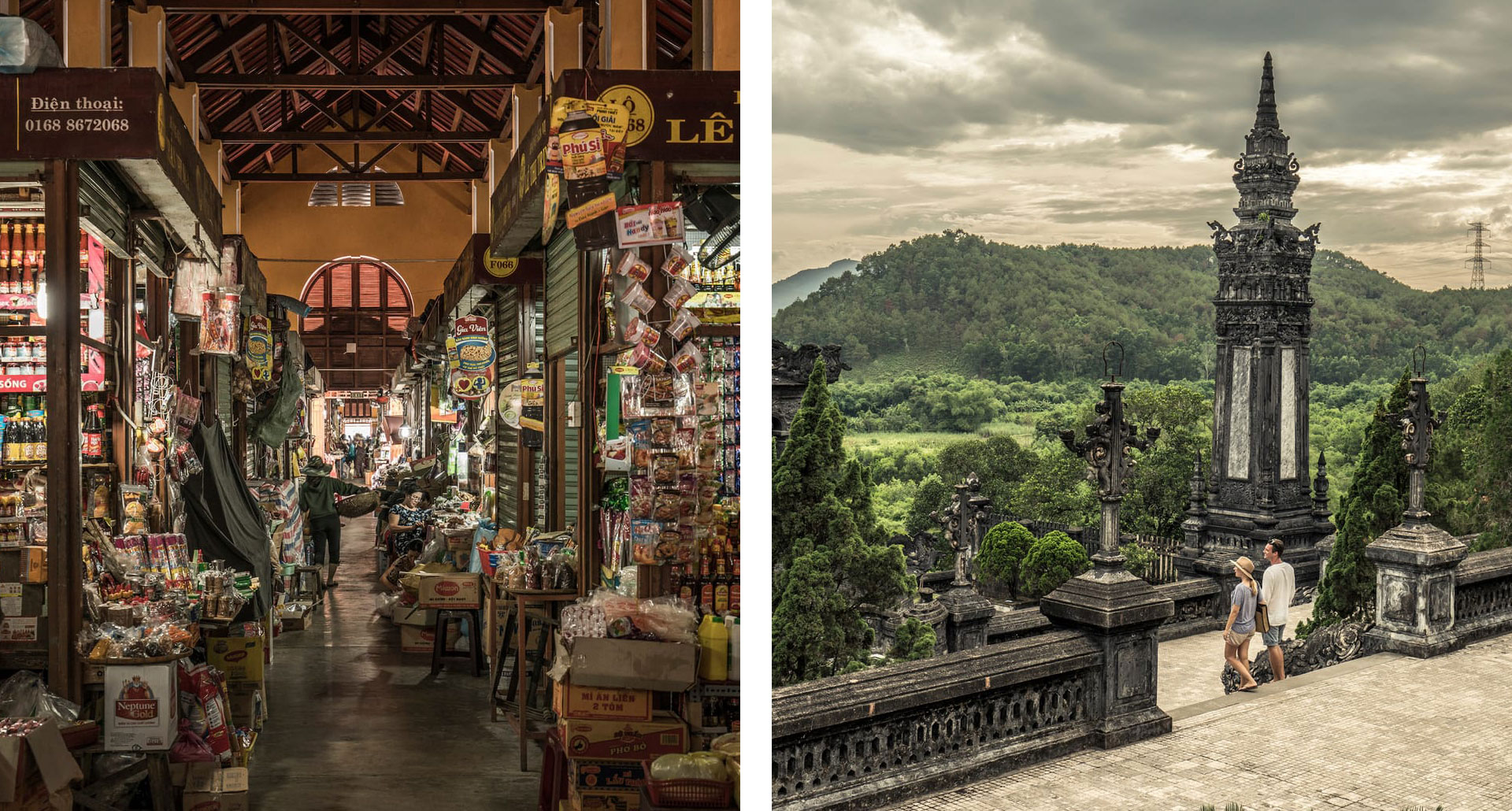 And Hoi An is traveler-friendly. To a fault, some would say. A ticket to Ancient Town, for instance, is a necessity, with a guard reportedly somewhat selectively enforcing who actually has to pay to get in. But a well-worn path means many established experiences for travelers, with somewhere around ten billion cooking classes to choose from in a town known for its particularly excellent cuisine. Consider timing your visit with one of the lantern festivals coinciding with 2019’s lunar calendar.

The Nam Hai, with its gorgeous villas along the sand, have the beachy part of Hoi An more than covered. But with the takeover by the Four Seasons, they’ve also added activities like the Nam Hai Cooking Academy, bike rides through the countryside, and cruising along the Cua Dai River to complement your expected forays into town.

A motorcycle grand prix. A magnificent rock formation. A koala conservation centre. Yes, there are things going on at Phillip Island besides the penguin march. But if you’re making the trip from Melbourne or you came here for one thing… it’s obviously the penguin parade. Every night, as they have for thousands of years, the world’s smallest penguins walk their way home from the sea to their nests as tourists look on from boardwalks or underground viewing centers, resisting the powerful urge to take photos (the penguins are extremely sensitive to light). It’s as joyful as it sounds.

The penguins, like so many of the natural attractions in Australia, are affected by climate change. But in something of an ironic twist, reports from the last few years indicate that now is as good a time as any to see the spectacle. Scientists believe that global warming is resulting in the penguins breeding earlier in the season, avoiding some of the historic dangers they’ve faced in the summers and expanding their marching numbers on Phillip Island. Scientists don’t know the effect of more penguins on the ecosystem. But if we had to advise you, we’d say it’s probably better to catch the spectacle now.

A 90-minute drive from Phillip Island, Melbourne has — as you would expect from the second largest city in Australia — something for everyone. Ovolo Laneways, The Prince, Lyall Hotel and Spa, and Tyrian Apartments are some of our favorites.

Blue houses. Blue streets. Blue city. European travelers might know all about the Blue Pearl already, an enticing location especially when you factor in the short distance from Spain. But for those coming to Morocco from elsewhere, it’s less likely to cross your mind than the well-worn paths of Marrakech and Fes. Once you make it, you’ll find the same features — a historic grand mosque, centuries-old architecture — but with a lot more blue. There doesn’t seem to be a straight answer as to why, exactly, the buildings are blue in Chefchaouen. Some cite the shade as a natural mosquito repellent, others attribute the style to the Jewish community that arrived after the inquisition in 1492. All we know for sure, and unmistakably, is that it’s beautiful. And highly Instagrammable. If you want to get the sexiest travel photos in 2019, here’s your first stop.

Meanwhile, you should make sure to work up an appetite for the prodigious amounts of goat cheese and orange juice beloved in Chefchaouen. To do that, we recommend the hiking scene, although some would take this opportunity to say that the other color of Chefchaouen is green. Morocco is supposedly one of the world’s biggest producers of hashish, with the Blue City a known destination for that particular type of tourism. And whether you’re here for that scene or not, you should know that touts will approach you on the issue. But the Rif Mountains frame this city, and within them flow the Cascades d’Akchour, two lovely waterfalls that require no chemical enhancement to enjoy.

Without an airport of its own, we recommend the three to four hour drive to Chefchaouen from Fes. Fes, deeply historic but less crowded than Marrakech, is full of comfortable riads, from the luxe Palais Amani to the more intimate, eight-room Riad Laaroussa. And with Fes as a home base, you’ll find plenty of options for day trips to Chefchaouen.