If you know Marseille only for its reputation as a gritty, rarely glamorous second city, well then, what a difference a year makes. Not this year, to be clear. We’re talking about 2013, when Marseille served as European Capital of Culture, a designation awarded annually to two European Union cities. Flooded with euros in the build-up to the honor, Marseille built new museums and revitalized public spaces, and that’s on top of what the city’s always boasted: sun, beaches, and all the good things that come with the word “Mediterranean.”

Here’s where to begin in Marseille:

IF YOU TAKE ONE BOAT:
If there are diehard Count of Monte Cristo fans, you’ll find them on the ferry to Chateau d’If, the prison — think Alcatraz — famous for putting away the fictional protagonist in Alexandre Dumas’ celebrated 1844 novel. And though you’ll get a lovely view of the Vieux Port on your way to prison, we recommend the slightly longer float along the calanques. Stretching the coast between Marseille and Cassis, the calanques are Mediterranean beauty personified, a series of inlets amidst the imposing limestone cliffs jutting into the sea. Follow the coastline and you’ll come to Calanques National Park which, in 2012, became France’s first new national park since 1979.

IF YOU HAVE ONE DRINK:
A strong aperitif called pastis has about the same status in Marseille as bouillabaisse. Both are city staples, both have deep roots here, and both are a must for visitors looking to get a sense of the place by putting things in their mouths. The yellow, anise-flavored booze, usually served alongside a tall jug of water for mixing, became popular in the early 20th century after a ban on its cousin, absinthe. Drink it slowly, drink it with a view of the sea, drink it knowing that it’s about 40 percent alcohol. Look for the classic brand, Pernod Ricard, in a bottle boasting “pastis de Marseille.”

IF YOU SEE ONE PORT BY LAND:
Take a boat and you’ll likely see Vieux Port by sea, but it’s worth a look around by foot, too. A beneficiary of recent renovations, the port received a massive mirror ceiling that’s reminiscent of Chicago’s Cloudgate sculpture and just as reflective of the city. And we mean that literally, not as a metaphor for Marseille’s shiny new development. In fact, Vieux Port means “old port,” and it’s the old that retains a large appeal in the area — think centuries-old Fort Saint Nicolas and Fort Saint Jean, in addition to the ancient church, Saint-Ferréol les Augustins. Then there’s the fish market, a longstanding institution itself. If you want to see what your bouillabaisse looks like before it’s stewed, that’s as good a reason as any to wake up before 9 am, when the fishermen begin to display and sell their morning catch.

IF YOU VISIT ONE MUSEUM:
Inaugurated during — what else — that magical 2013 capital designation, the stunning Museum of European and Mediterranean Civilisations (MuCEM) counts the 12th century Fort Saint Jean as one of its attractions. Check it out before taking a bridge to the so-called J4 building, where you’ll find exhibits spanning the breadth of all Mediterranean societies, from the historical to the contemporary. But aside from that ambitious mission, the two buildings offer lovely courtyards and gardens. There’s no better place to find spectacular views of the city and sea (besides, perhaps, the famous Basilique Notre-Dame de la Garde).

IF YOU DO ABSOLUTELY NOTHING:
Do it (nothing, that is) on the beach. You have options. The beaches of Plage du Prado might be the most popular, with Pointe Rouge another favorite, or you could always head to the water — along with the hiking and snorkeling — at Parc National des Calanques.

Marseille is unlike any other destination, and the hotels featured on Tablet are unlike any other hotels. You know where to start when it comes to unique local attractions — now it’s time to discover where you should stay. 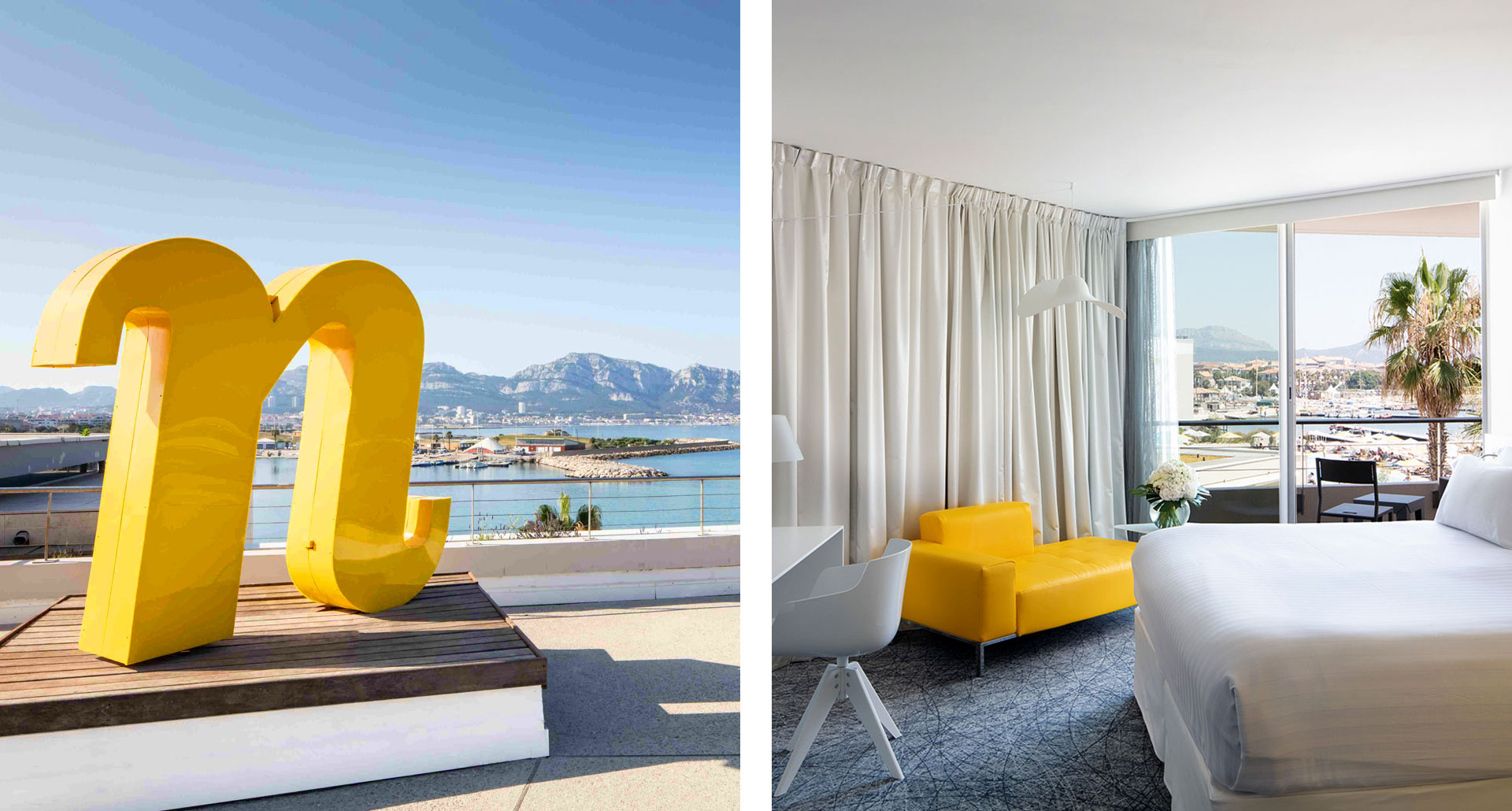 Some seaside hotels offer sublime exterior views paired with plain-jane interiors, as though a decent piece of furniture would somehow spoil the vista. Nhow Marseille Palm, by contrast, is lovely inside and out. A stylish place overlooking the sea, it’s near the popular beaches and a short jaunt to Vieux Port. 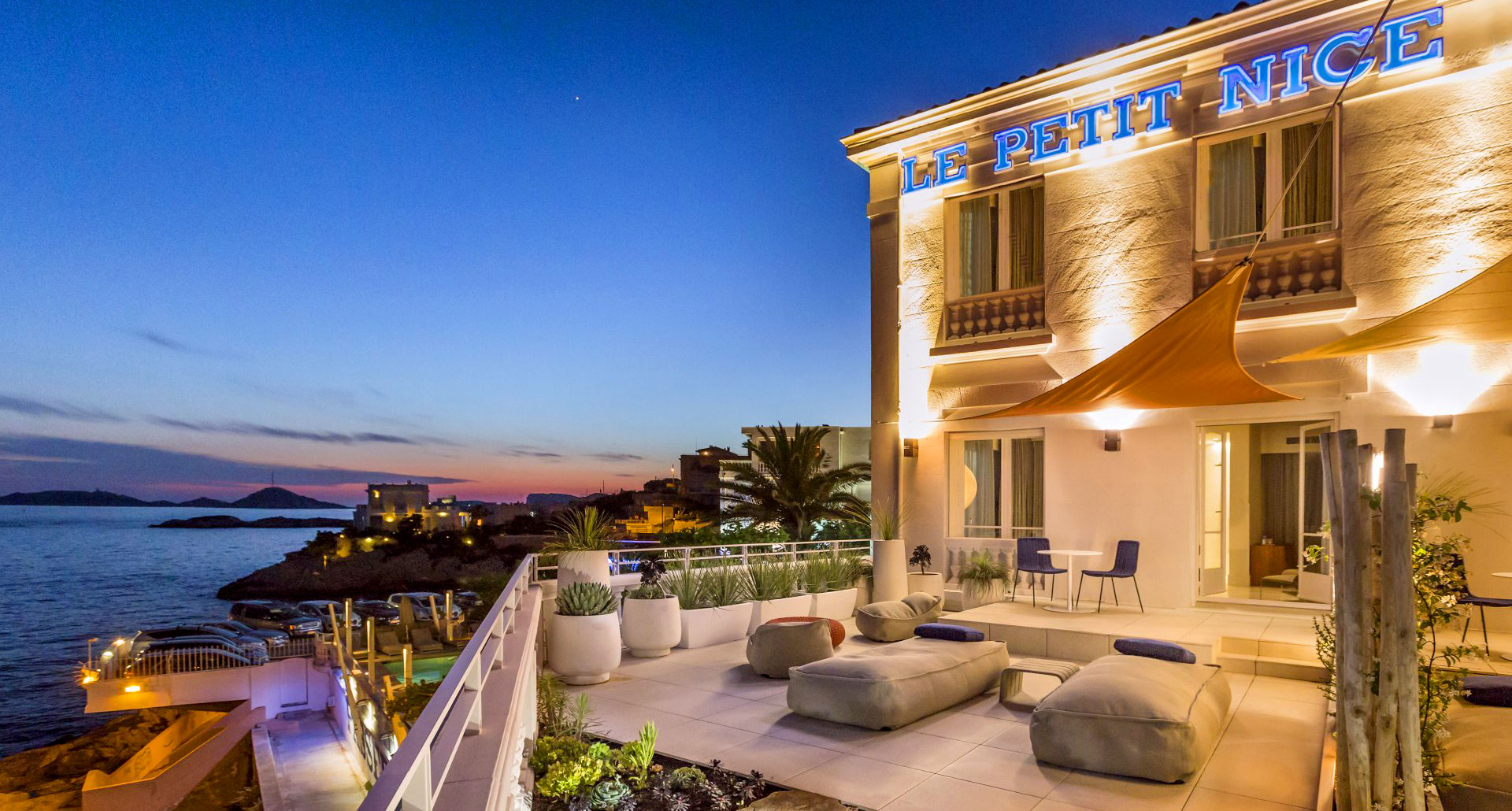 Marseille’s most exclusive hotel was converted from two Greek-style villas in 1917 and has been managed by the Passédat family ever since. The name denotes something of a culinary dynasty, and the menu here is a list of Mediterranean seafood to the tune of a Michelin star. 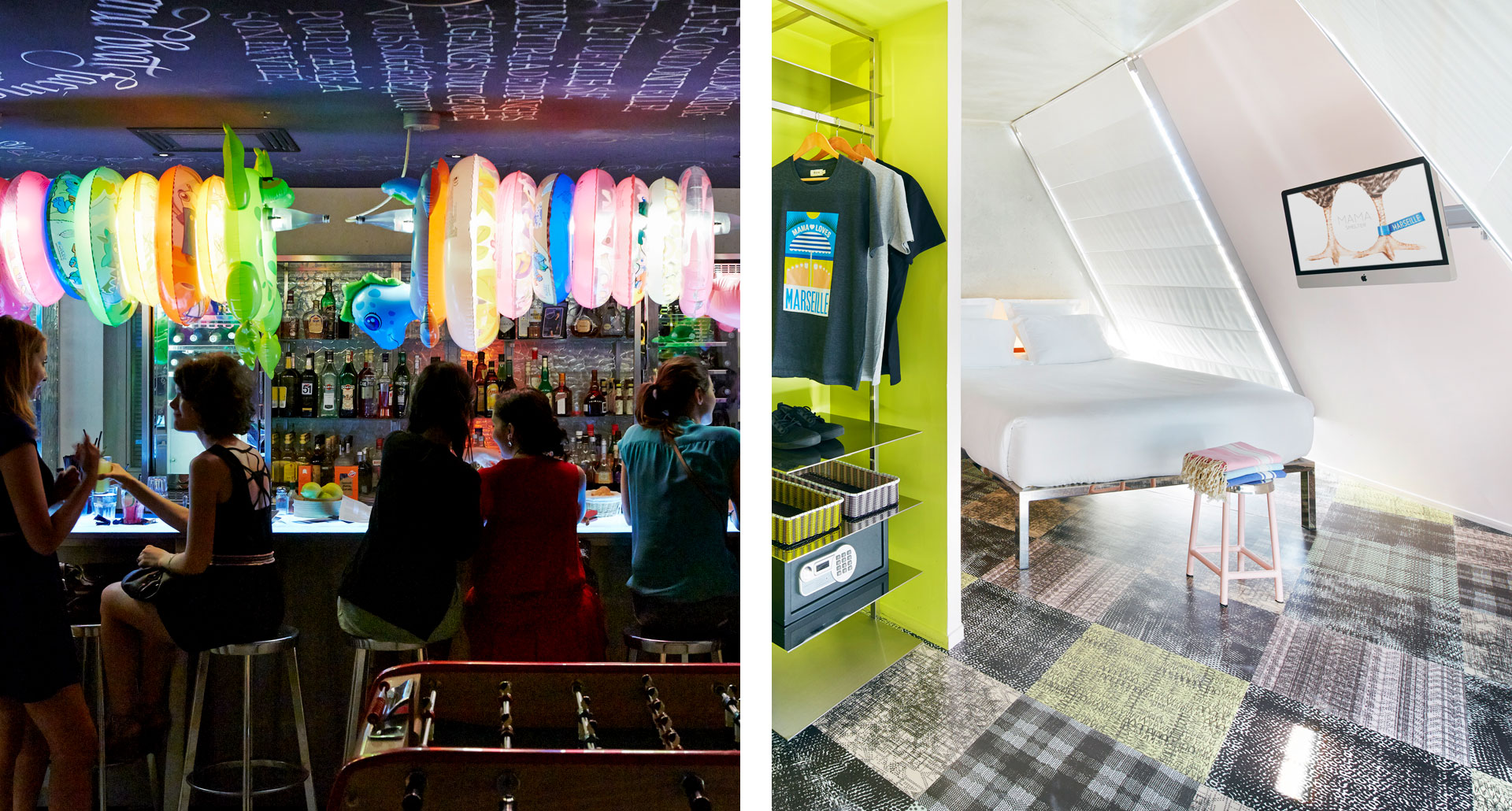 The sequel to the first Mama Shelter in Paris, its slightly edgy, budget-friendly sensibility is a perfect fit here, especially with a location between the Old Port and the artsy Cours Julien district. All about sociability, buzz, and entertainment, this is the budget boutique done right.

A more thorough experience of peace and quiet than Villa Massalia in Marseille would be hard to find. Alongside Parc Borley (and its horse races), surrounded by residential neighborhoods and the nearby beaches, it feels almost like a resort. The pool deck is pure Riviera, and the view out to see takes in blue water, the white rock of the calanques, and very little of the city. 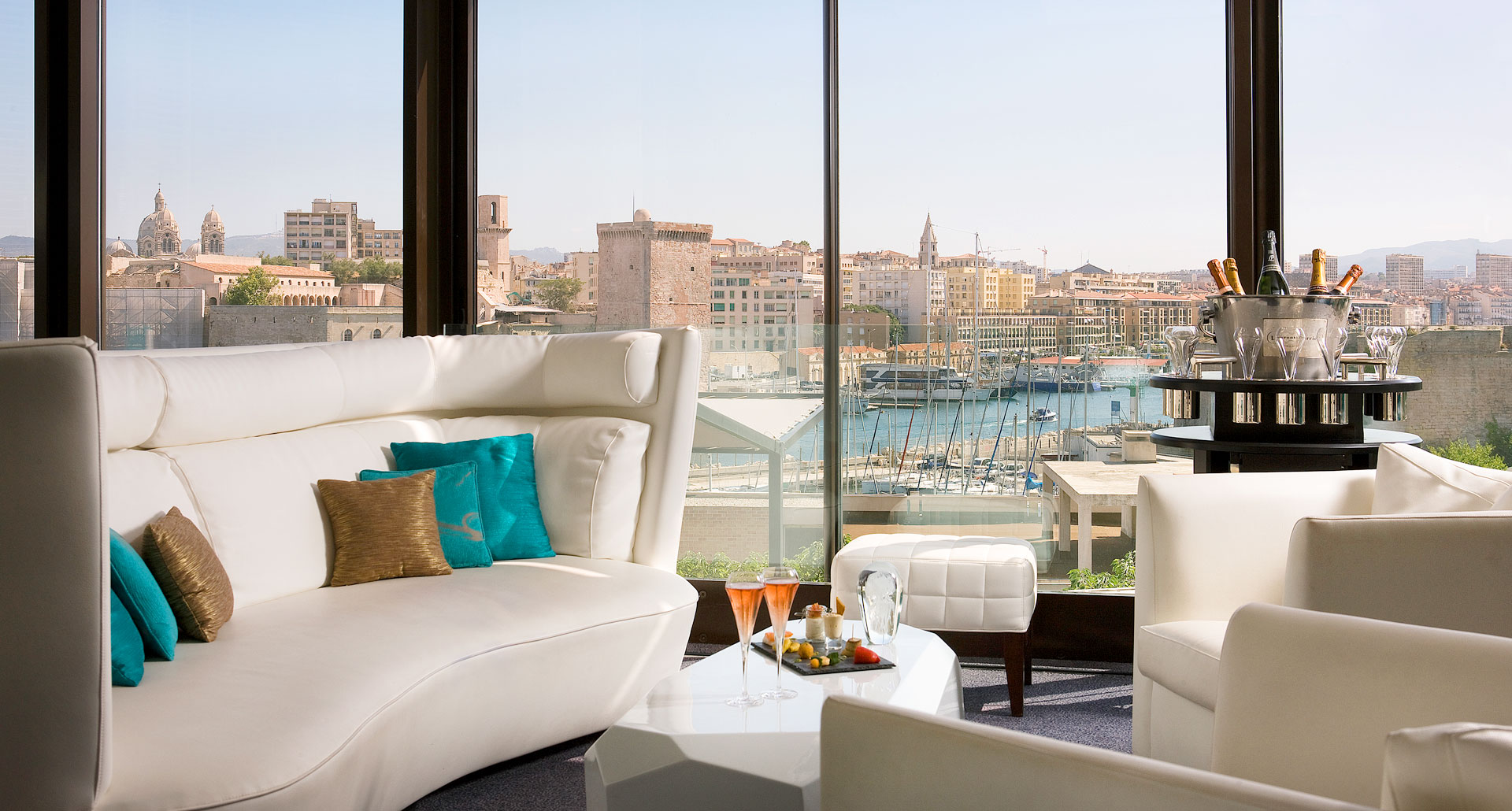 In a city overflowing with local character, the Sofitel Marseille Vieux Port is a contemporary luxury hotel that sports the brand’s typical, ultra-refined style, the clean-lined, soft edge of luxury that never approaches gaudiness. The spa, meanwhile, is the perfect place to hide out after a long day in the sun.

See all of our hotels in Marseille.