Forget haunted hotels, you’ve seen that list a million times. This Halloween, we’re focusing on hotels in locations that are not for the faint of heart.

Halloween, with its haunted houses and horror movies, is a way to experience a controlled form of terror. Like roller coasters and skydiving, it’s a chance for us to dangle our feet over the precipice of danger without the usual risks. Luxury boutique hotels, on the other hand, are not as eager to participate in the fear-based economy. Short of using ghost stories as a marketing gimmick, it’s not really their raison d’être.

That doesn’t mean there aren’t thrills to be found. These thirteen hotels have put down roots in some scarily precarious positions, perching themselves on cliffsides and mountaintops and other altitudes where humans don’t normally exist. Their foundations were driven as deep as a wooden stake into Dracula’s heart, so the terra is plenty firma — but they still provide a strong enough dose of excitement for those who feel most alive when they’re cheating death.

They’re also great for people who just like cool and beautiful hotels. That works too. 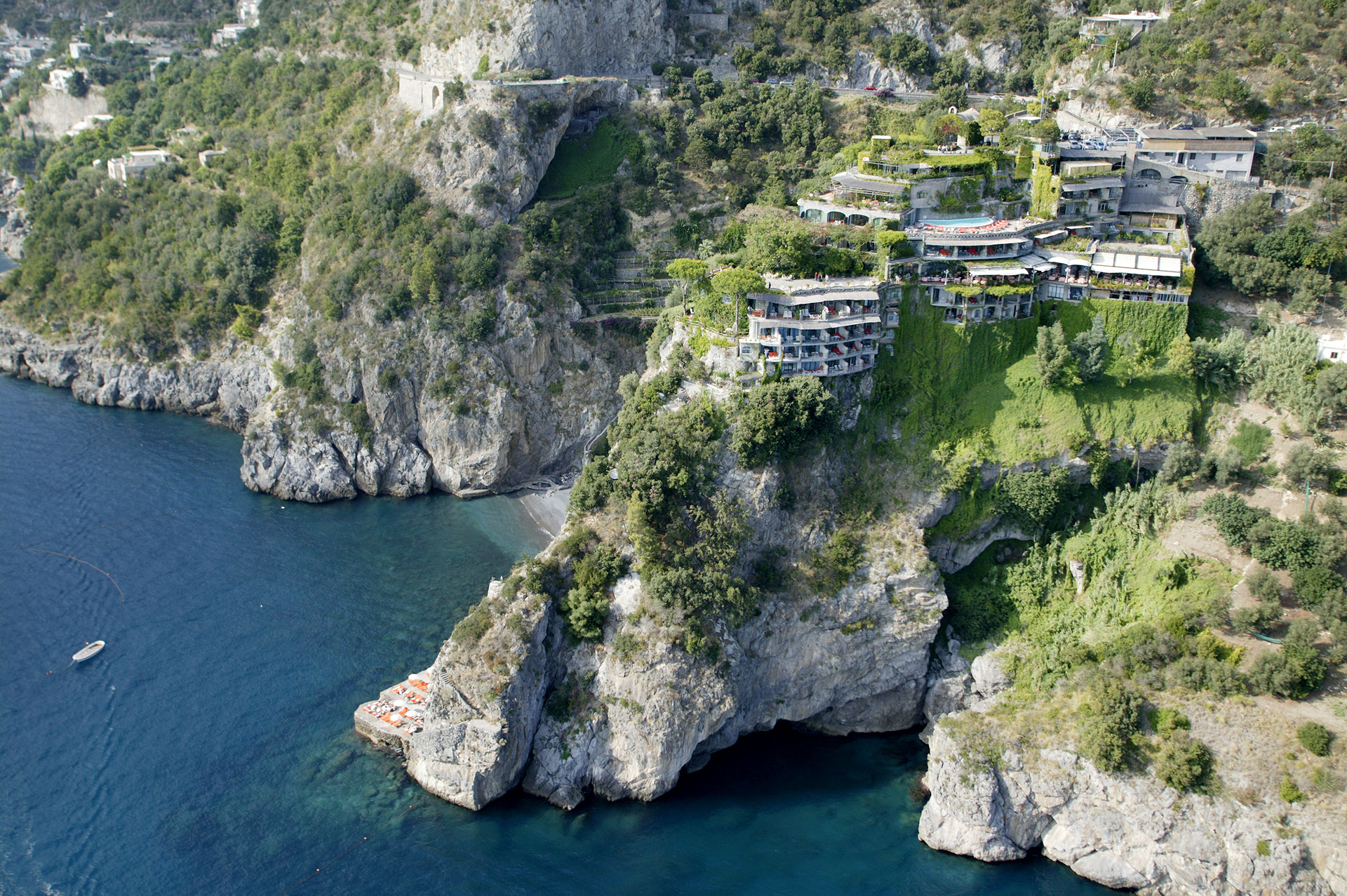 A small 17th-century chapel marks the entrance to Il San Pietro di Positano, while the rest of the hotel clings desperately to the cliffside below, each level descending the face like a staircase. 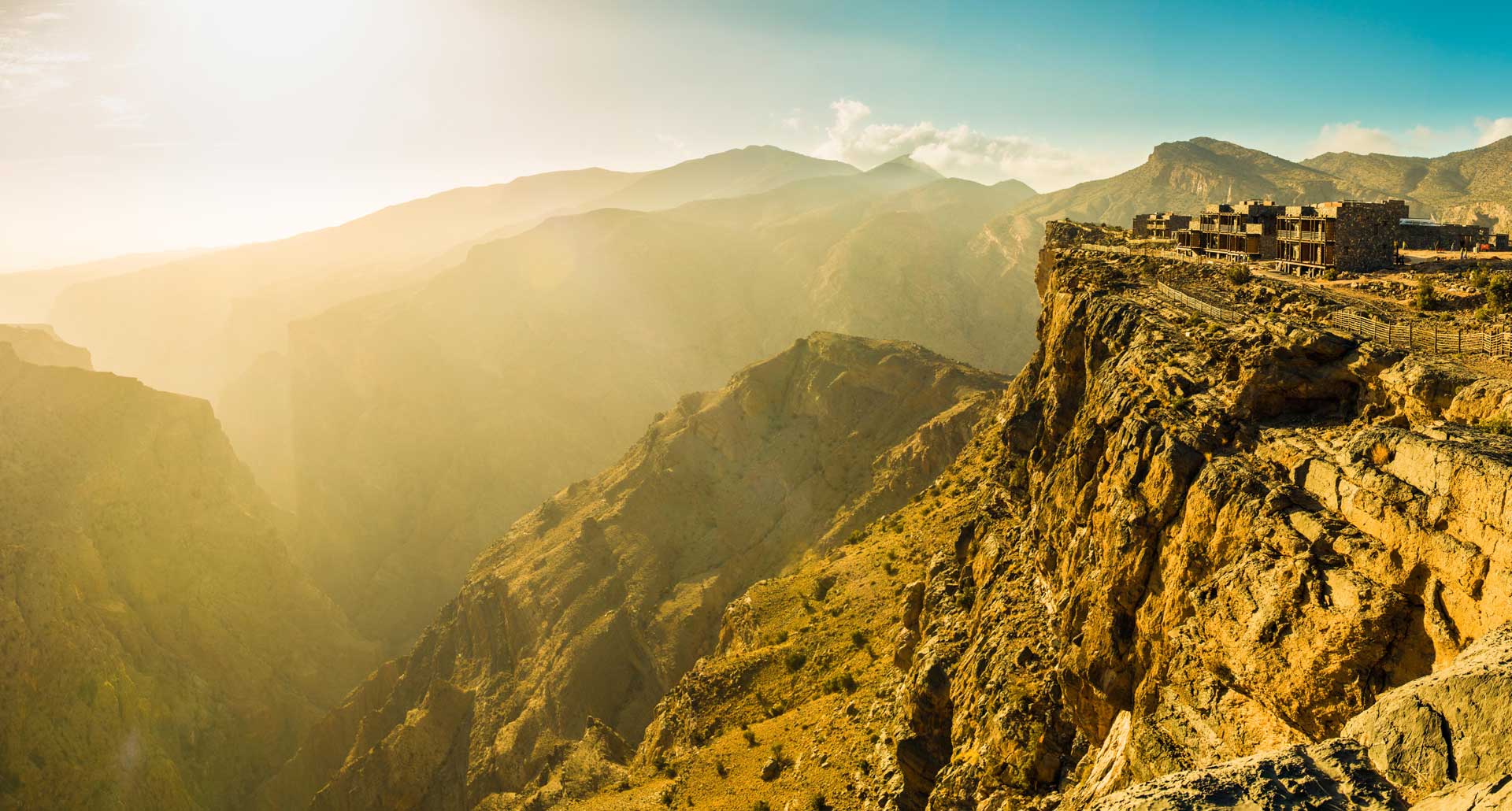 This stunning picture seems too good to be true, but the reality of Alila Jabal Akhdar is no less wondrous. The hotel sits atop a jagged cliff within Oman’s Al Hajar mountain range, offering mesmerizing views into the surrounding gorge. 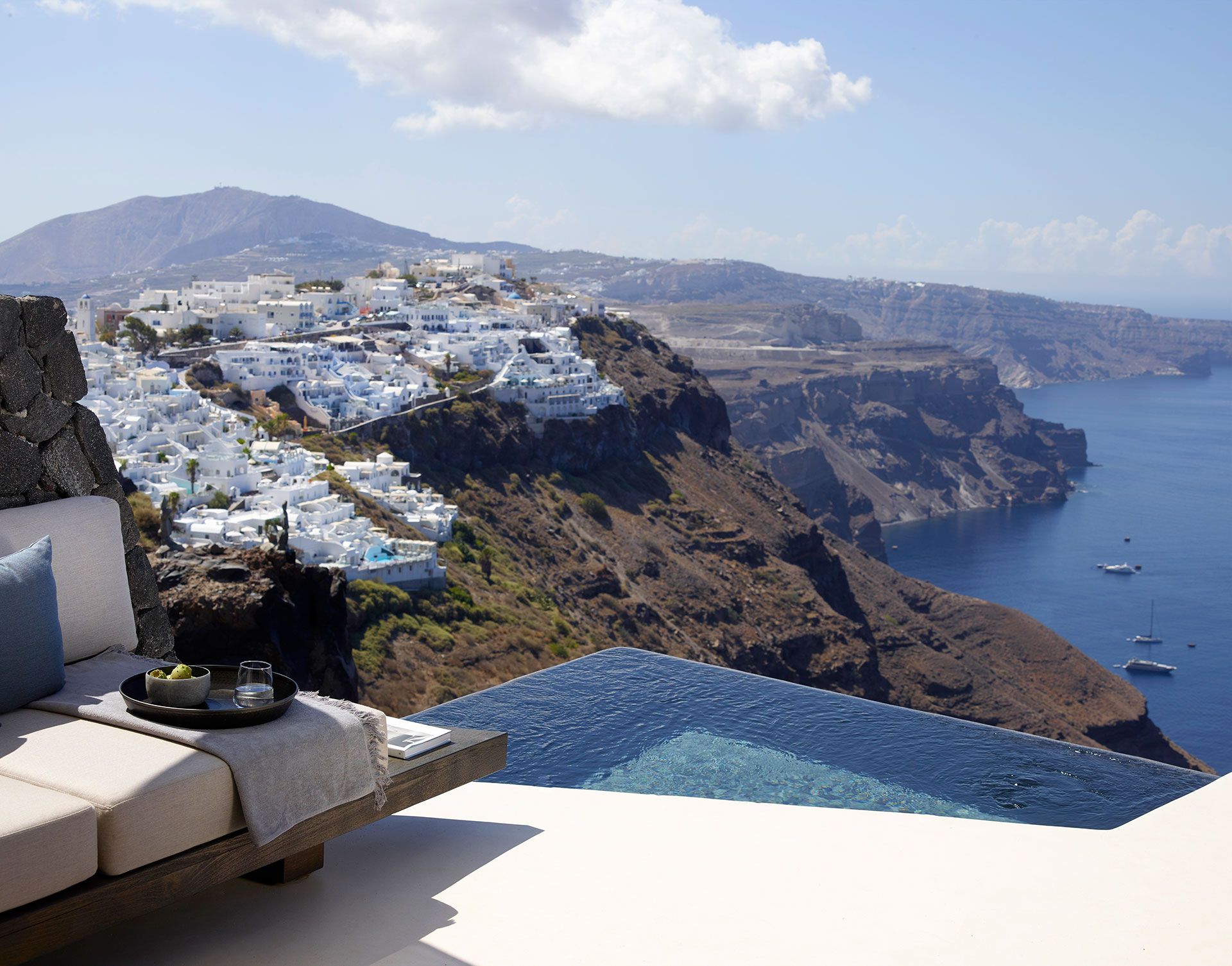 Because of its challenging location on a steep Santorini hillside, it was necessary to build Vora by hand using traditional methods — a technique that ensures the hotel meshes well with its epic surroundings. 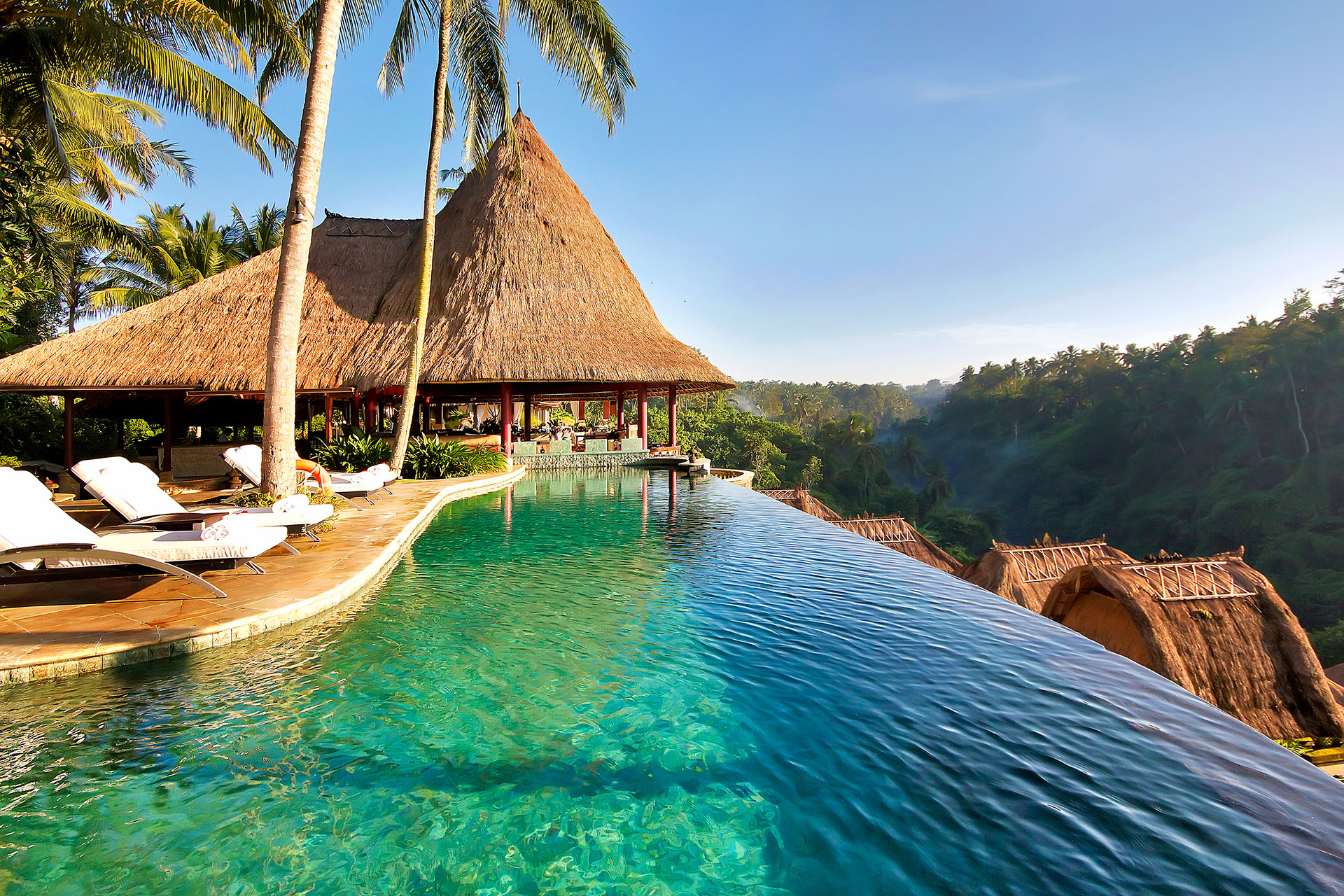 The infinity pools at Viceroy Bali would have felt right at home in our recent list of Hotel Pools with Awe-Inspiring Views — their edges peer out into space from high up on a hillside overlooking the lush (and steep) Lembah Valley. 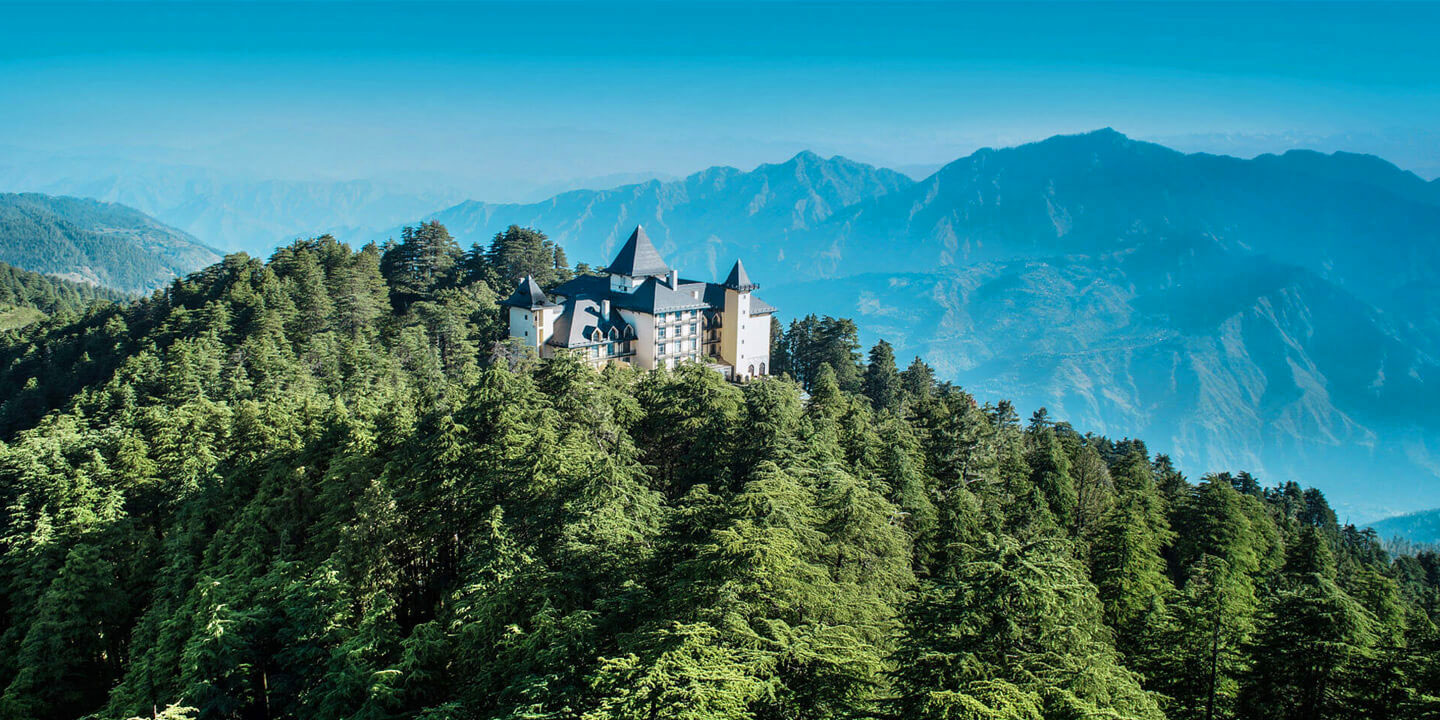 Situated at an absolutely dizzying altitude of 8,250 feet, within twenty-two acres of mountainside cedar forest, Wildflower Hall is your chance to climb the Himalayas in the most luxurious manner possible. 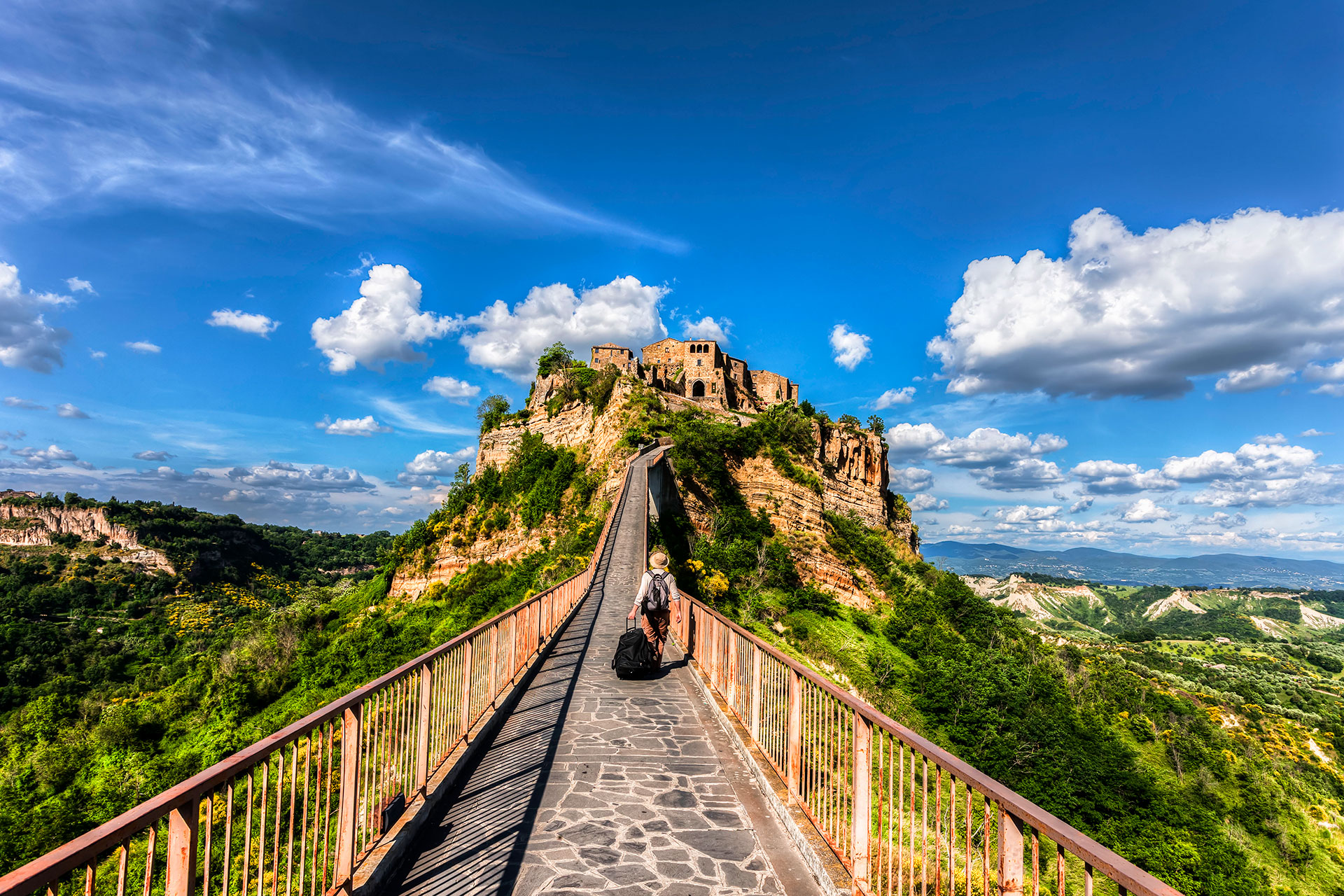 Corte della Maestà makes its home in a medieval village that was completely deserted after a 17th-century earthquake. La cittá che muore – the dying city — is perched on a rock outcropping, accessible only via a long footbridge. 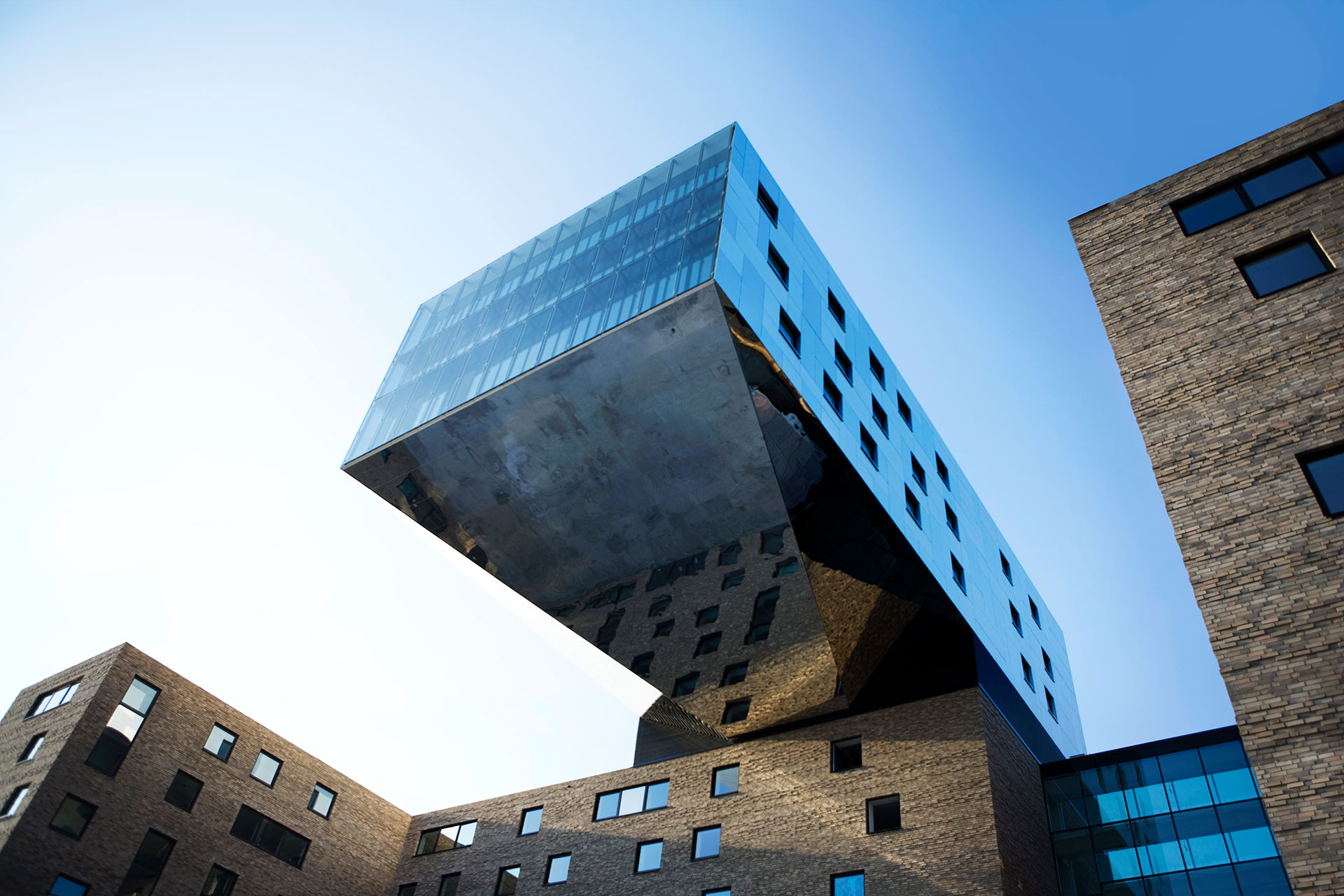 And now for something completely different. The upper floors of Nhow Berlin, with their shiny metallic skin, cantilever dramatically out over the river Spree. The design is a triumph by architect Sergei Tchoban. 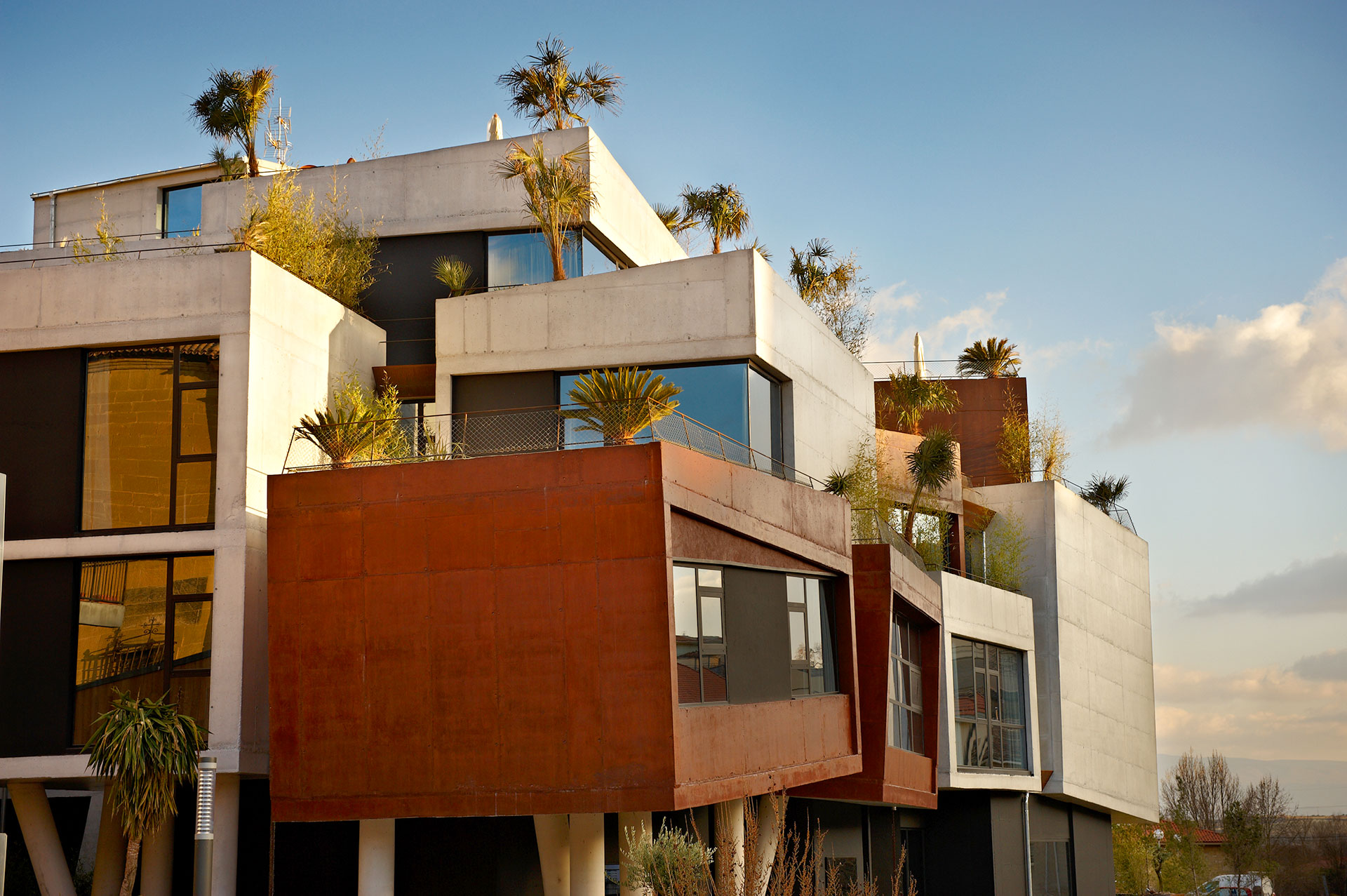 Continuing with the theme of groundbreaking architecture (and physics), Hotel Viura’s precariously-stacked guest rooms imagine what a hotel might look like if it were designed by Picasso in his cubist period. 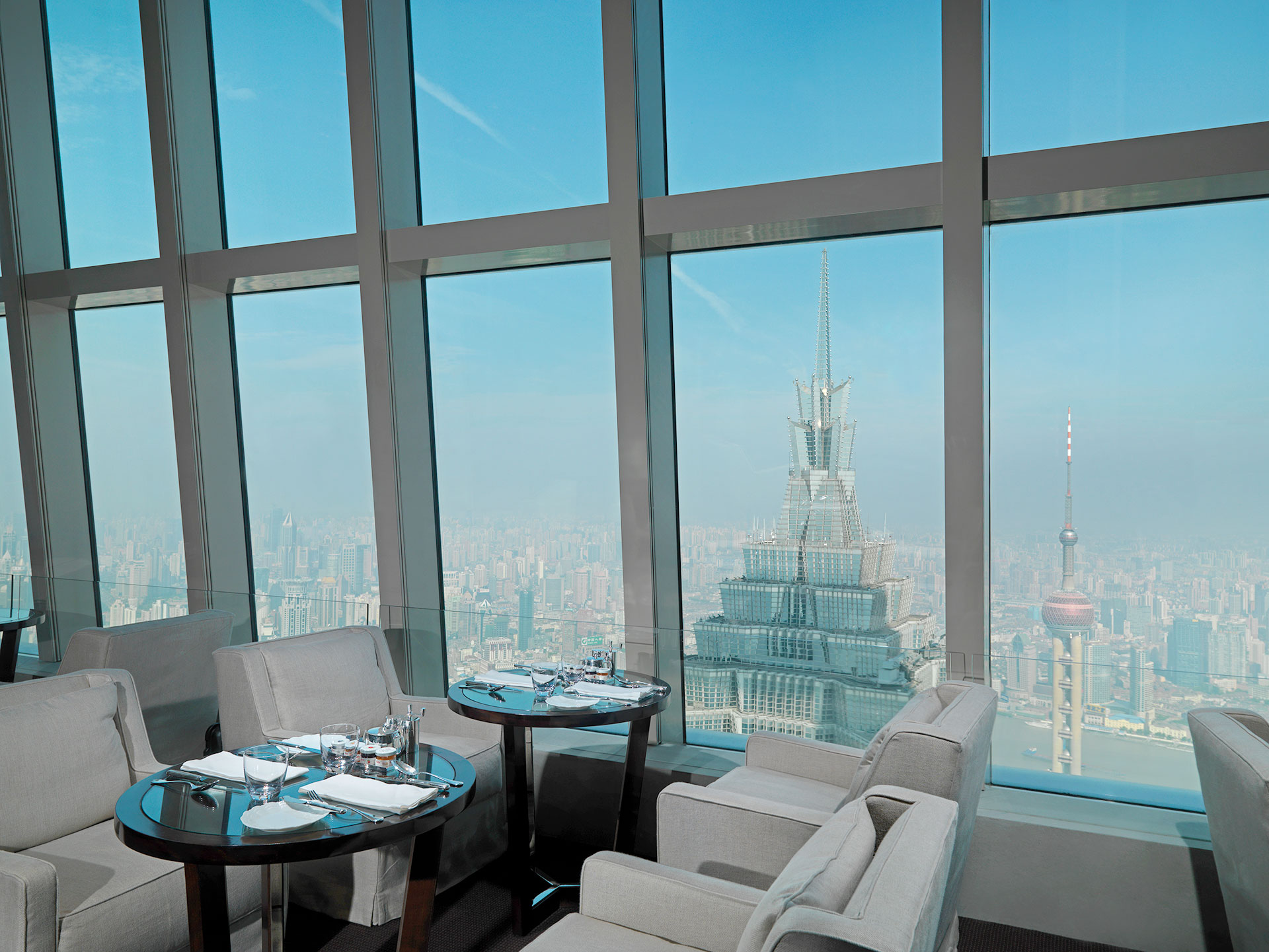 The Park Hyatt Shanghai occupies floors 79 through 93 of the Shanghai World Financial Center, which for a time in recent history meant that its rooms were the world’s highest. 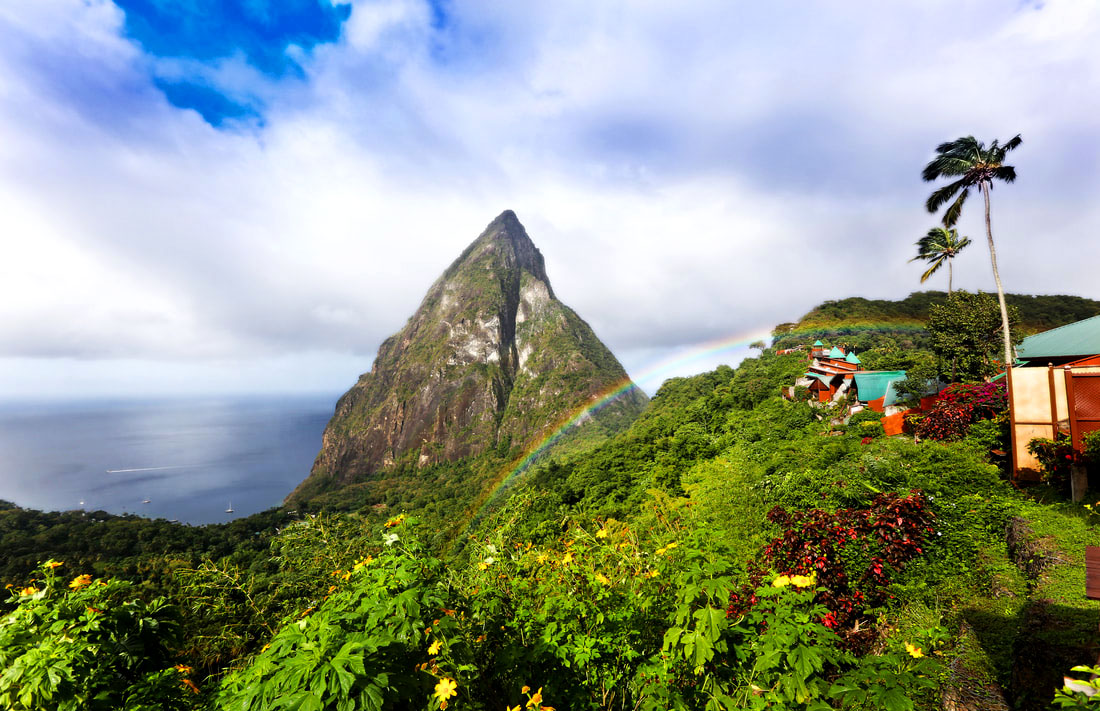 The open-air, open-wall suites at Ladera Resort cling to a volcanic ridge far up above Pitons Bay, making for some of the Caribbean’s most extraordinary views. We hope you aren’t prone to sleepwalking. 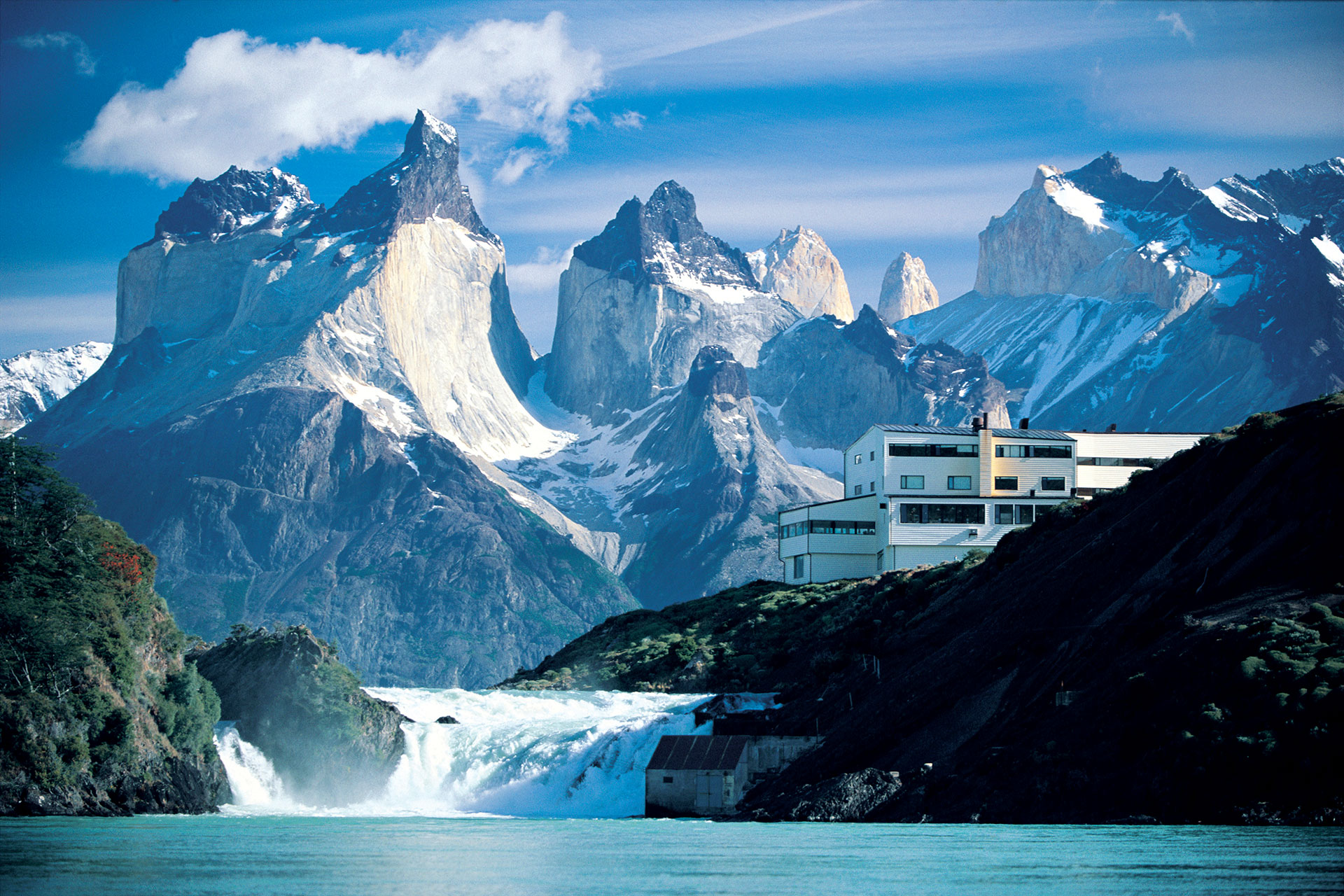 Requiring a five-hour drive on some rather difficult roadways, just getting to Explora Patagonia is a bit of an adventure. But the journey is more than worth it for this location, only yards from the onrushing Salto Chico waterfall. 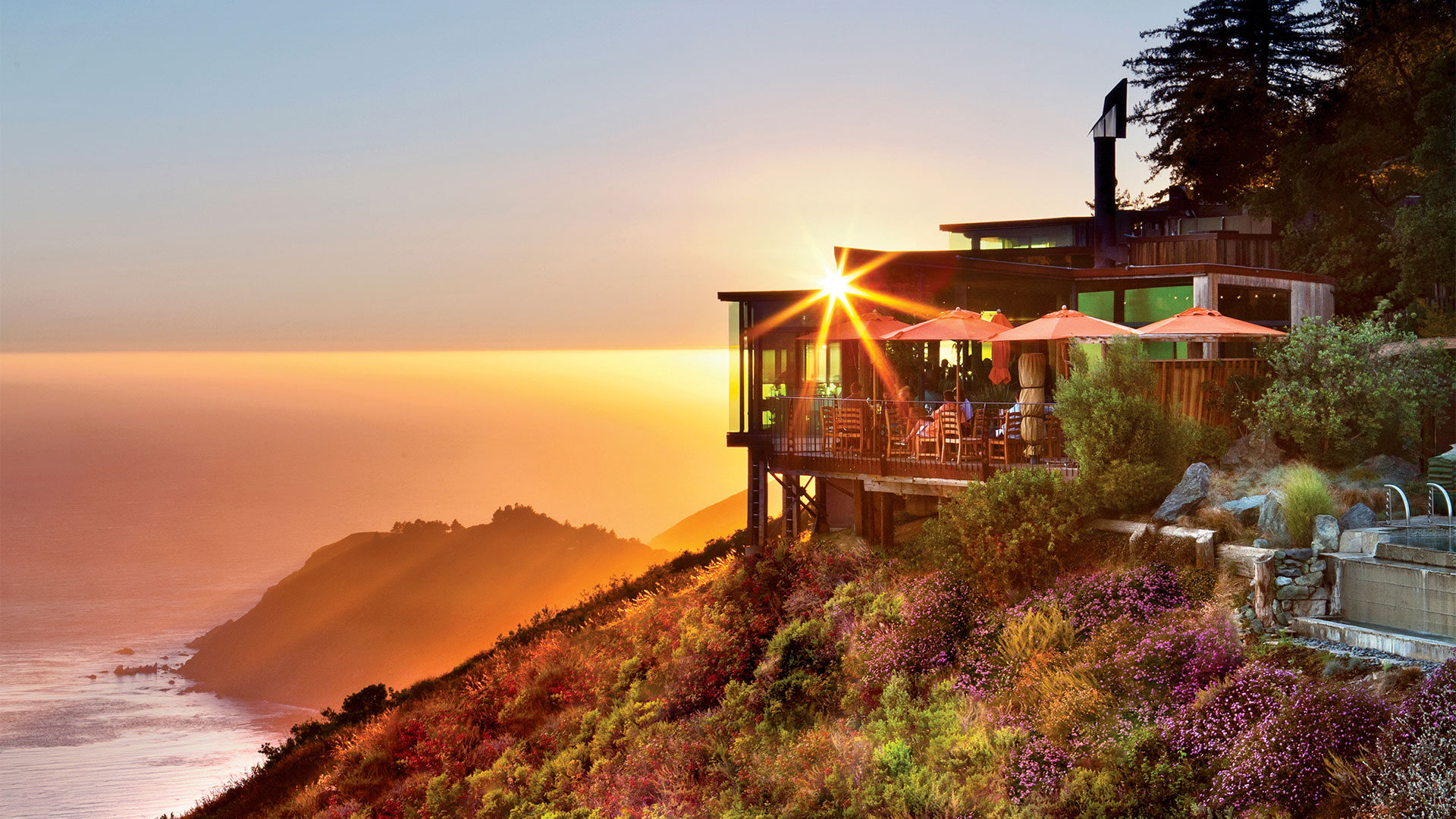 It would be difficult for any man-made structure to compete with these cliffside views of the Pacific, or the majesty of the redwood forests; but this strange and decadent little hotel holds its own. 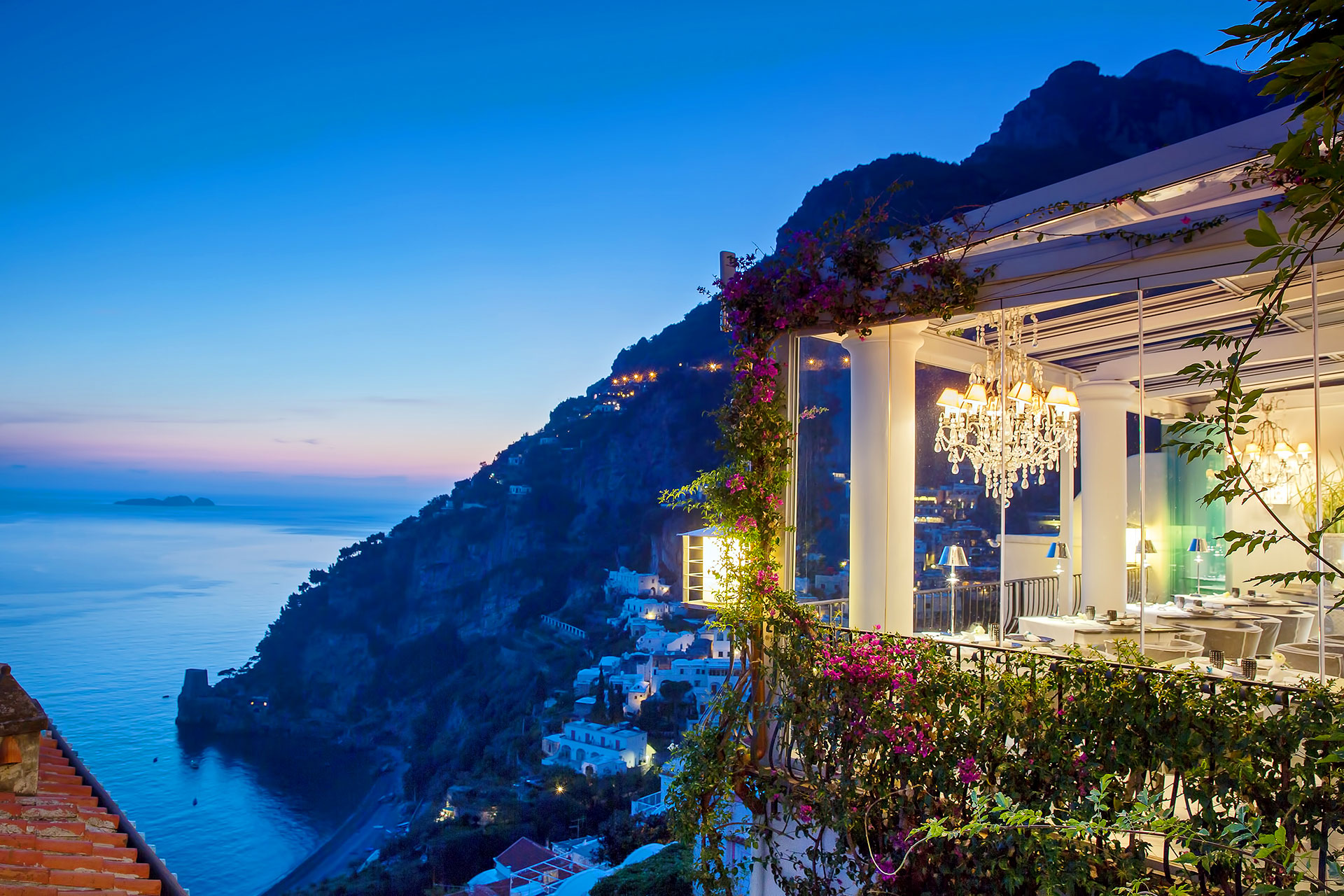 Hotel Villa Franca is built right into a steep cliffside in the heart of old Positano: if you think of the town as a giant amphitheater with a sea for a stage, the hotel would be on the first or second tier of balcony seating.

If you need a few more thrills, check out these Clifftop Hotels of the Highest Quality.