Chicago’s famous attractions are as iconic as the Midwestern reputation for niceness. But things are not always what they seem. With help from Atlas Obscura, we’re exposing a lesser-known side of the city — and its residents.

Midwesterners are generally a courteous bunch, I won’t dispute that. It isn’t always politeness and propriety, though — not in Chicago, at least. Chicagoans are absolutely vicious if a suburbanite like myself implies that they’re from the city proper. As anyone from Chicago itself will tell you — aggressively — you can’t say you’re from Chicago unless you’re actually from Chicago. I’ve been scoffed at, ridiculed, and in one case actually had liquid thrown in my face for making the claim (it’s a long story), and I’m just from 30 minutes outside city limits.

Why so serious? Maybe residents are especially territorial because Chicago is the only massive city in a relatively rural region. Maybe that leads to people from farther away than usual claiming it as their home. Or maybe it’s just insecurity. Whatever the reason, Chicagoans, at least I’m not from St. Louis, right?

Lucky for me, our partnership with Atlas Obscura — cataloger of all things bizarre and overlooked — makes it easy to learn city secrets that might surprise even the most die-hard, screaming Cubs fan. These aren’t the standard landmarks you’d find in a tourism brochure. These attractions reveal another side of the city. Bring them up, and you might actually pass for an honest-to-God native.

Not that I’d recommend trying, unless you’re wearing a poncho.

The Obama Library will have weirdo neighbors

Here’s a fact you can break out at your next soiree. Did you know an obstetrician uses special forceps if the placenta doesn’t come out naturally? Did you want to know that? Those are the kind of facts that await you at the International Museum of Surgical Science, an ode to the history (and the hardware) of medical slicing and dicing. For a certain type of person, the giant plush organs at the gift shop alone might be worth the trip.

Nor is IMSS the only niche assemblage in Chicago. The Newberry Library Postcard Collection, for instance, holds an outrageous selection — in the millions — of old postcards, open by appointment only, and the Leather Archives & Museum takes a serious look at the understudied subcultures of leather, kink, and fetish. At the latter, an old boiler room hosts the “Dungeon Exhibit,” featuring things like a male chastity device and a spanking bench. For display only.

But the most arresting collection, fetish handcuffs aside, is not a museum but a shop, called Woolly Mammoth Antiques and Oddities. Depending on what impresses you, it’s a seriously impressive combination of medical peculiarities and bizarre works of taxidermy not completely dissimilar from the museum we showed you in Tuscany. Of particular note? The animal fetuses in jars, the alligator that’s been turned into a lamp, and the many, many bones.

Truly something for everyone in Chicago.

Not found in the Art Institute

Chicago boasts a massive, droopy-faced Picasso and a glorious, shiny bean. And somehow, those statues look incredibly normal next to the — pardon our Midwest French — Shit Fountain. We don’t say that to be crude. It’s not as messy as it sounds, just a stationary rock of dump standing as a passive aggressive reminder to pick up after your dog. Created by miffed Chicago artist Jerzy S. Kenar, locals who come across it generally laugh and take a selfie. The most creative passersby climb atop it for a particularly fecal pose.

For the slightly more refined artistic palette, there’s “Lucent,” a dazzling orb in the lobby of the John Hancock Building that draws favorable comparisons to the aforementioned Bean. Its 3,115 lights represent all the stars visible to the naked eye in the Northern Hemisphere.

But lest you think Chicago is all the highs of stars and the lows of feces, there’s plenty of weird stuff in the middle. The statue of G.V. Black commemorates a towering figure in the dental profession, the Man with Fish looks exactly as it sounds outside the famous Shedd aquarium, and an impressive number of Wizard of Oz sculptures adorn the instructively named Oz Park. Why? Because the book’s author used to live in the neighborhood. And also, why not? Chicago is strange.

The 20th Century was a dangerous time for leisure

Deep in the Field Museum, past the famous T. Rex, beyond the ancient mummies, sit two dead lions among a vast array of taxidermied African animals. Known as the Tsavo Man Eaters, these two lions — really very docile now — terrorized hundreds (and ate dozens) of railway workers in Kenya nearly 120 years ago. They’re not as big as you’d think.

Chicago’s littered with morbid little histories like that. You might walk by the appropriately named Alley of Death in the Loop without an inkling of the 600 people who burned to death there in 1903 theater fire. Then there’s the little plaque commemorating “Chicago’s Titanic” on the river, a small reminder of the over 800 who drowned when the S.S. Eastland capsized 20 feet from shore in 1915 before it could take its passengers on a company-funded cruise.

Like we said, Chicago was a tough place to try to take a load off in the 20th Century.

One odd death is clearly remembered in Chicago, with an infinitely odder gravesite. In “a scrapyard on the banks of the Calumet River” is a cemetery — if you can call it that — with a single grave. Andreas von Zirngibl, one-armed veteran of the Battle of Waterloo, was buried there by his family in 1855 before the land was acquired by a dock company. Thanks to the endless eccentricities of the law, the grave was preserved in perpetuity, and you’re welcome to visit, even if the area’s now a sparse industrial recycling plant (more details here).

Chicago is full of cool mini-chain boutiques, stylish outposts that work for either business or leisure. And you really can’t go wrong, because no matter where you stay in Chicago you’re going to come across gorgeous architecture and food that might kill you. 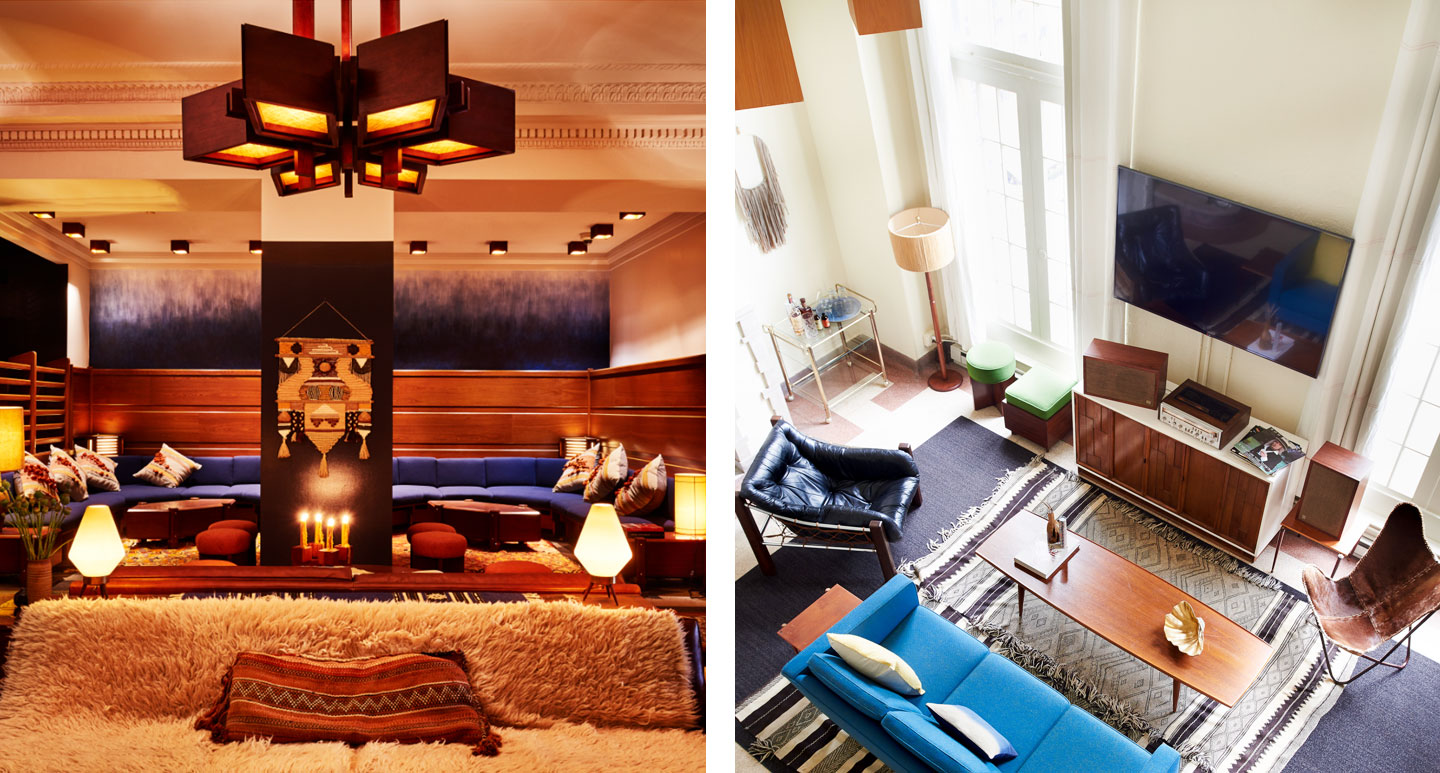 Part hotel and part hostel, Freehand Chicago is a place where the rooms are only part of the equation. The vibe here is all about communal living, and although there are more considerations for business travelers here than at its sister hotel in Miami, it’s still a safe bet you’ll end up bonding with your fellow guests, whether it’s over craft cocktails or coffee. 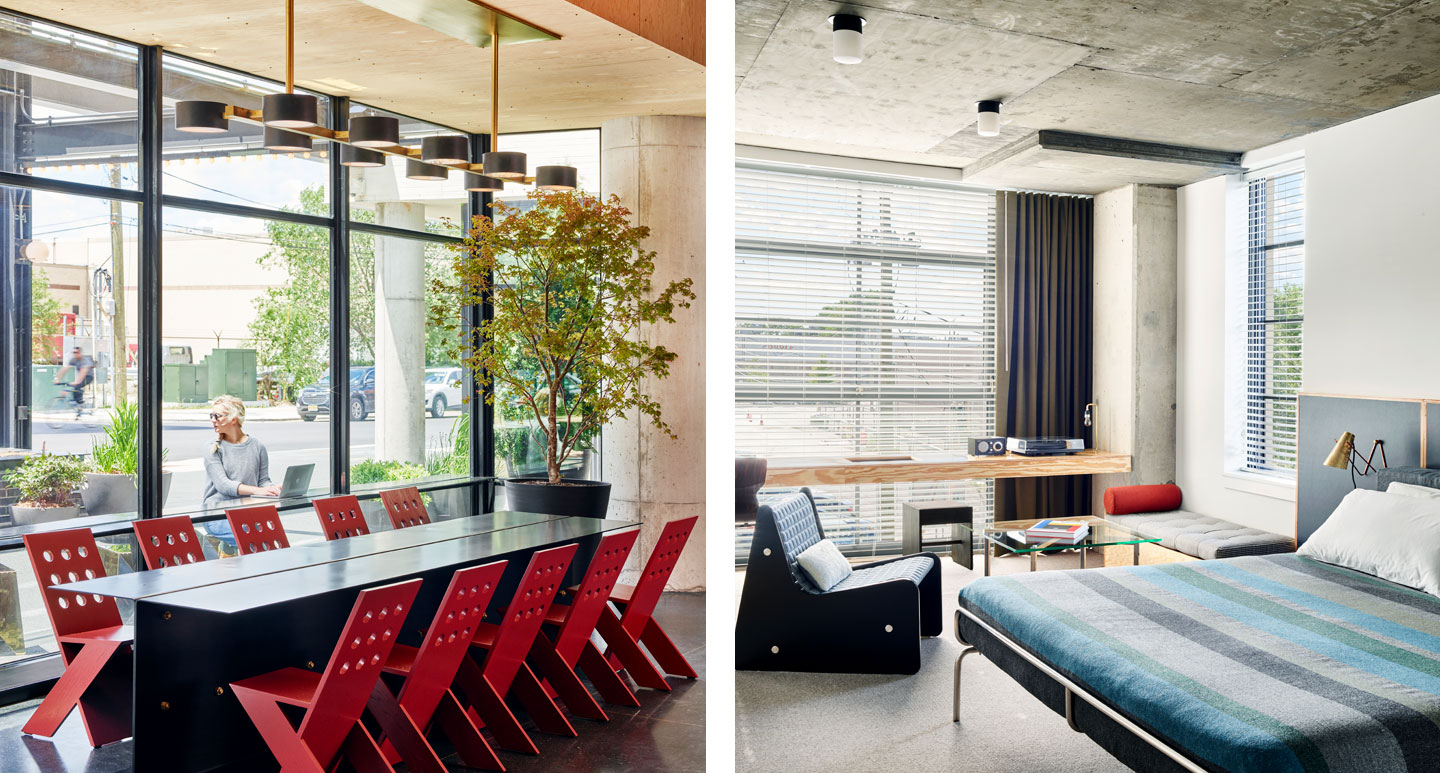 The Ace’s European-accented 20th-century modernism pays homage to Chicago architecture, while its restaurant pays homage to the city’s other passion: food. Built from the ground up as opposed to the skillful adaptations of its sister hotels, Ace Hotel Chicago provides a comfortable base from which to explore the often neglected west side of the Second City. 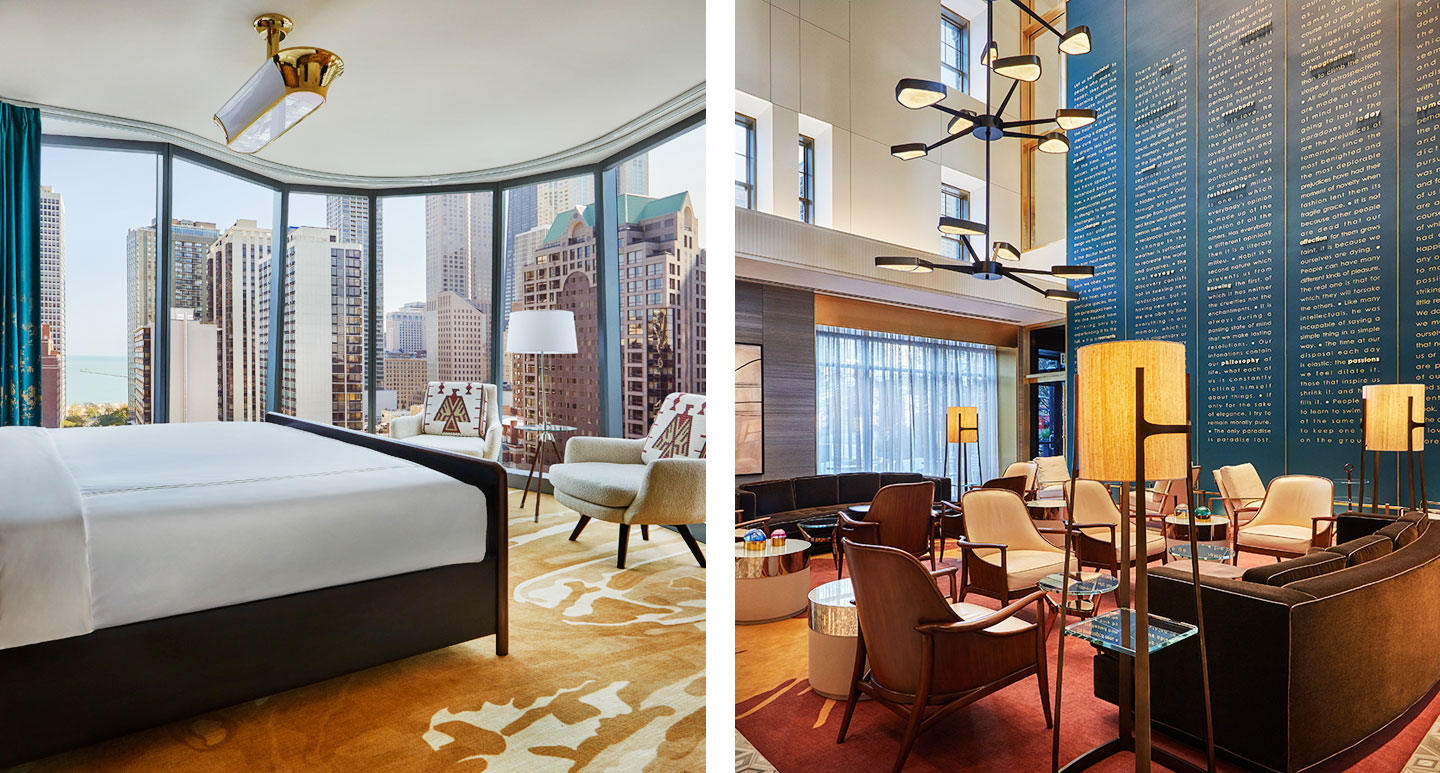 A gently undulating glass tower that sits above the preserved facade of the 1920s-vintage Cedar Hotel, the Viceroy Chicago is full of thrilling contradictions. Take the rooms’ interiors, which sport gilded headboards even as the rest of the furniture sticks to the cool of Chicago modernism. And you wouldn’t call it a contradiction, but the picture’s completed by the glorious indoor-outdoor lounge sitting up on the rooftop. 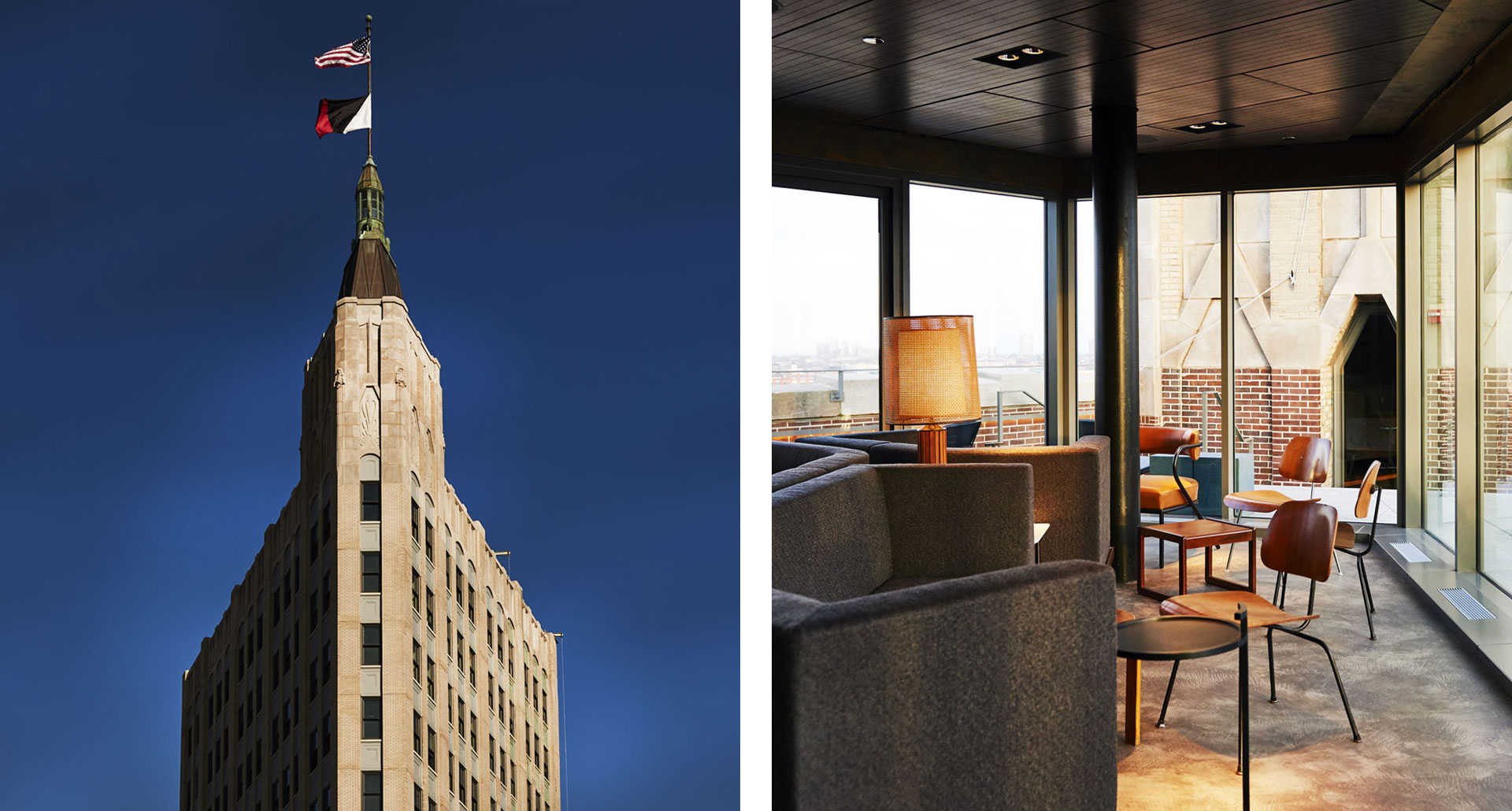 Itself an attraction for its antique elevator, the Robey — also known as the Coyote Building — offers a completely overhauled, cool, and industrial interior within a 1929 Art Deco skyscraper. Not to mention the impossible-to-top location in Wicker Park, made that much better by the striking indoor-outdoor bar on the 13th floor. 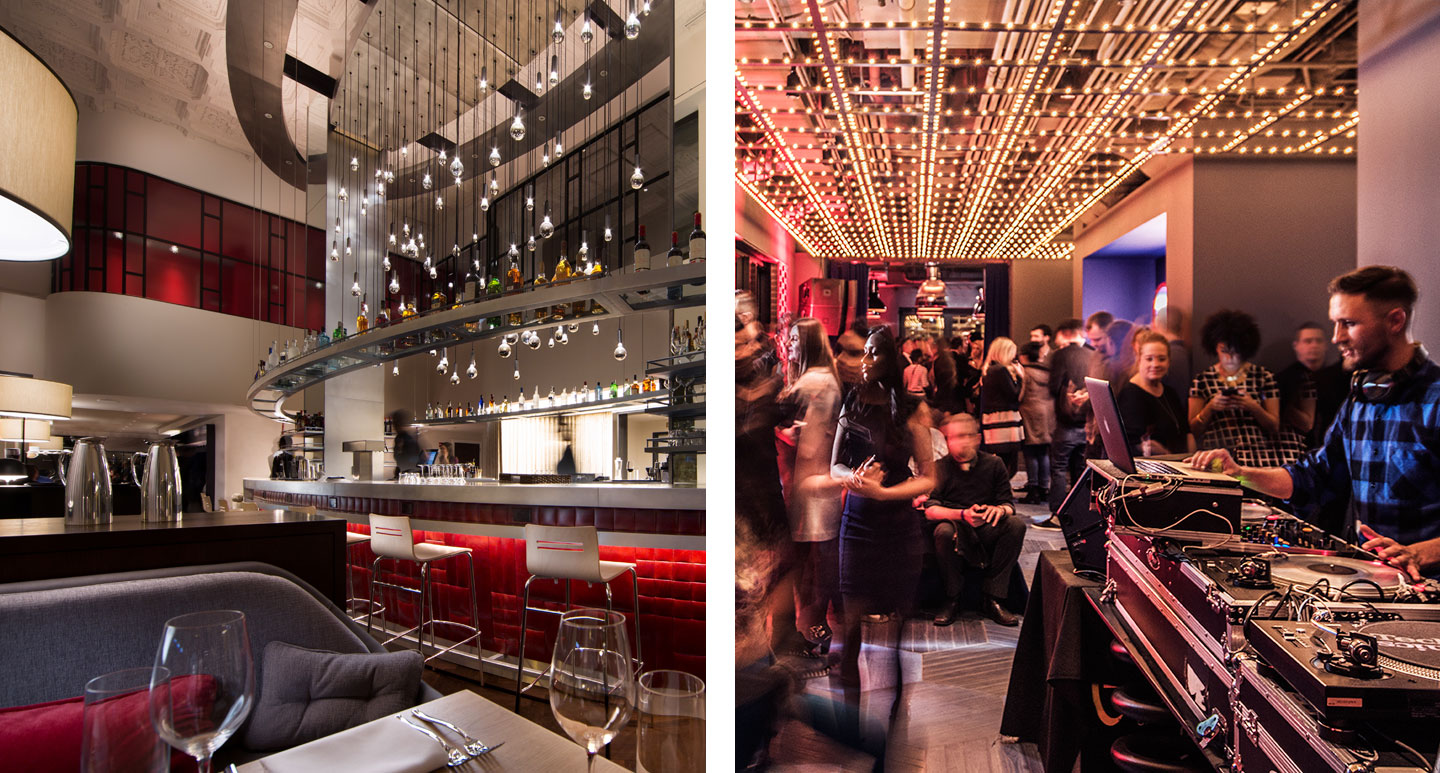 Another restored 1920s-vintage building, this one in the Loop, Virgin Hotels Chicago brings a fresh way of thinking to an old business. Start with common-sense amenities like free wi-fi and an inexpensive mini-bar, then move to the problem of useless hotel-room seating that’s solved by a convertible bed doubling as a multi-use lounge space. 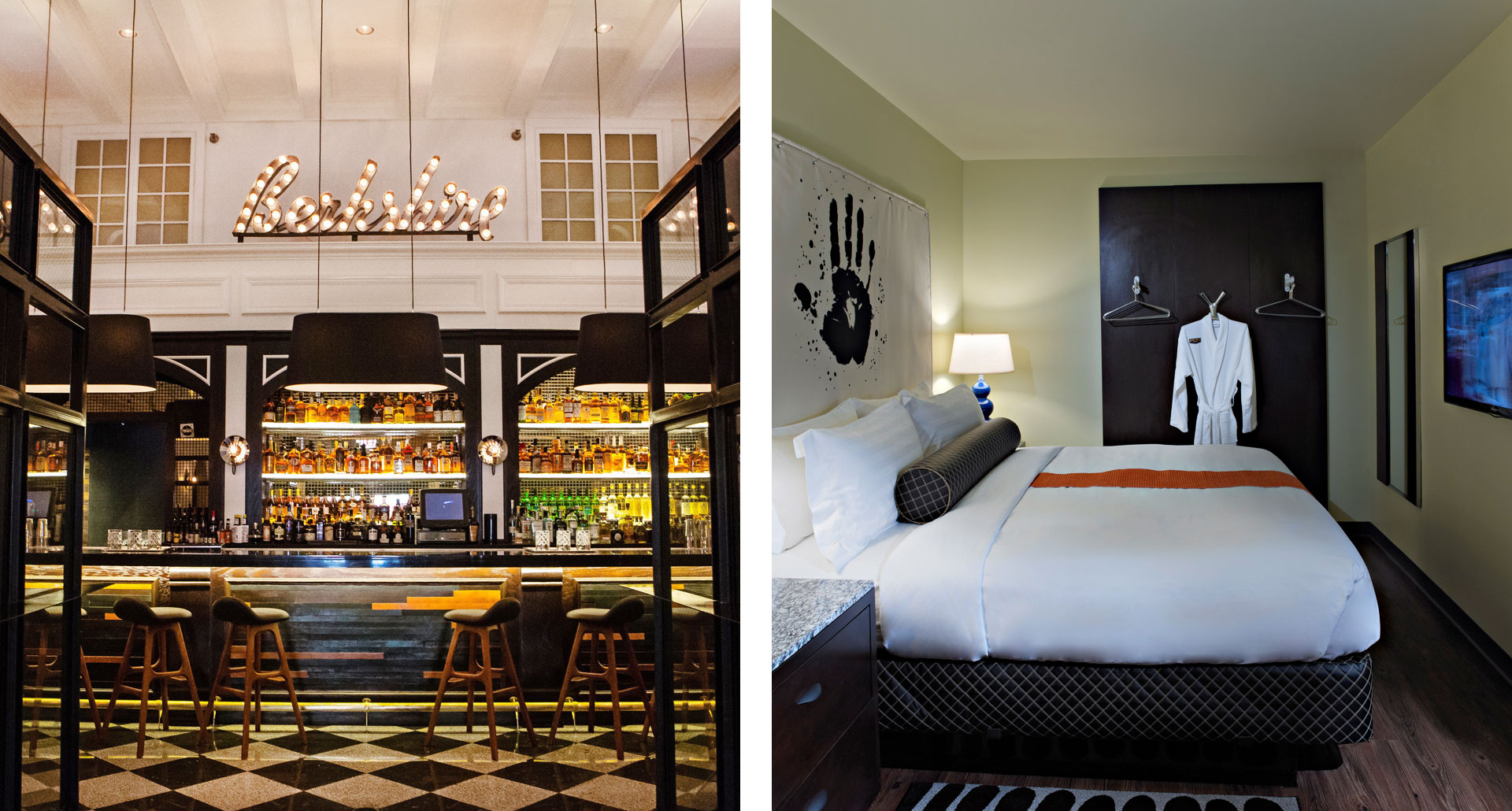 Among the many options for business travelers in Chicago, Acme Hotel goes the other way — a youthful, budget-friendly boutique smack in the busy, vibrant River North. Industrial warehouse-chic here meets modernist furniture and high-tech gadgetry, and people meet one another in the delightfully retro craft cocktail bar, the Berkshire Room. 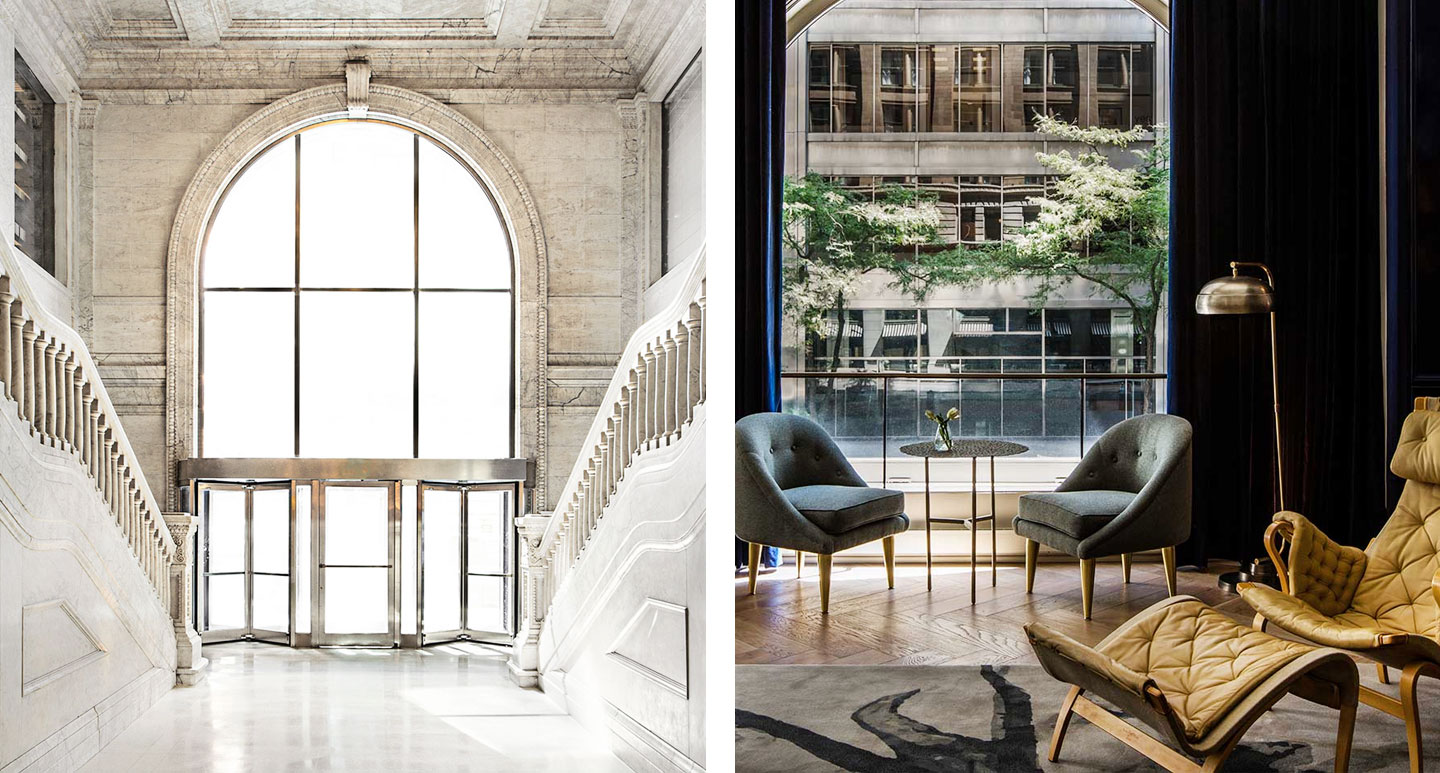 The Kimpton Gray — named for the marble of its original, century-old building — takes a structure with plenty of character and infuses it with a cool blend of contemporary style and the mid-century design for which the city is known. The neutral colors of the guest rooms, with just a touch of blue, betray a formality appropriate to the hotel’s use as a business hotel as much as a leisure one. 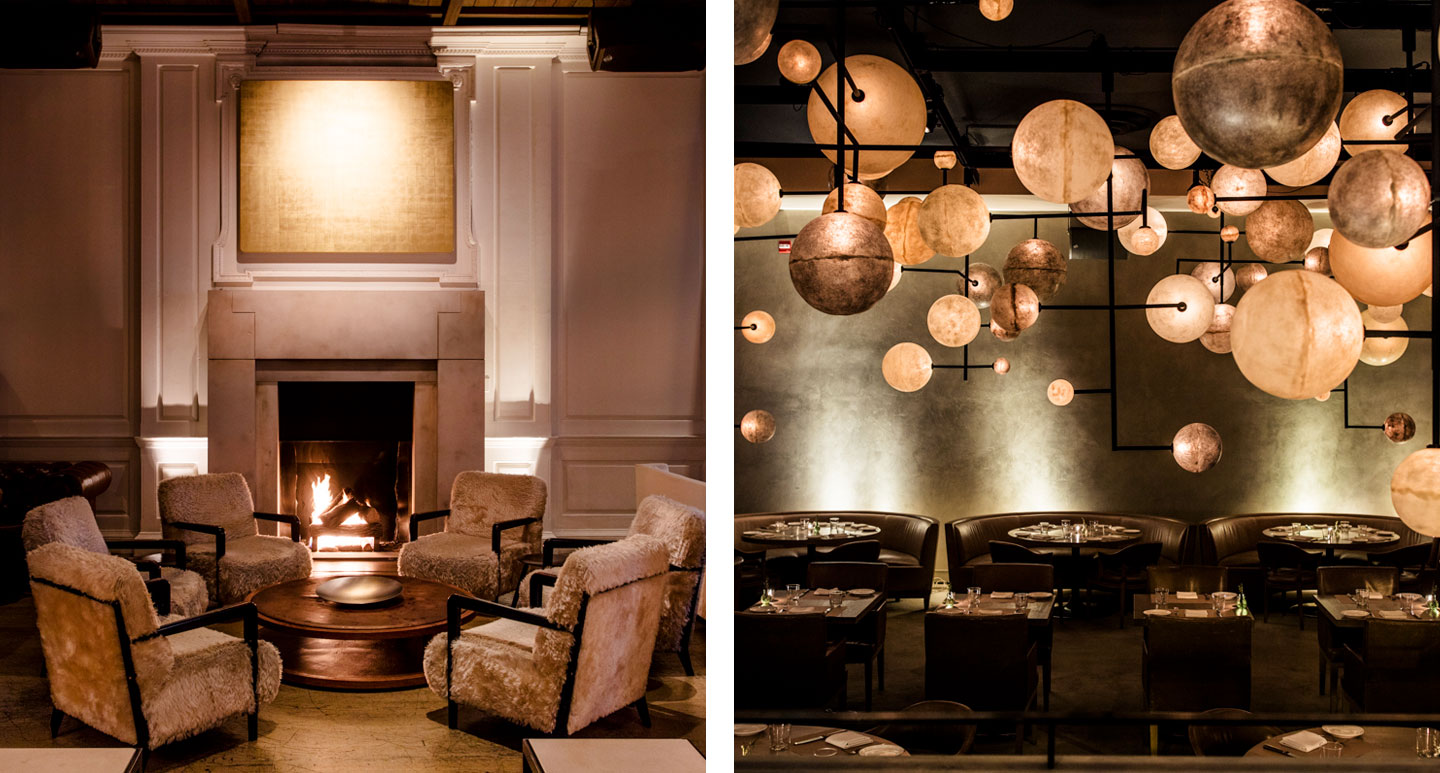 A little design goes a long way at Ambassador Chicago, where the spaces consist of subtly theatrical, highly stylish backdrops that seamlessly blend the classic with the contemporary. A philosophy of inclusivity permeates the place, with public spaces like the restaurant and bar serving as particular favorites. 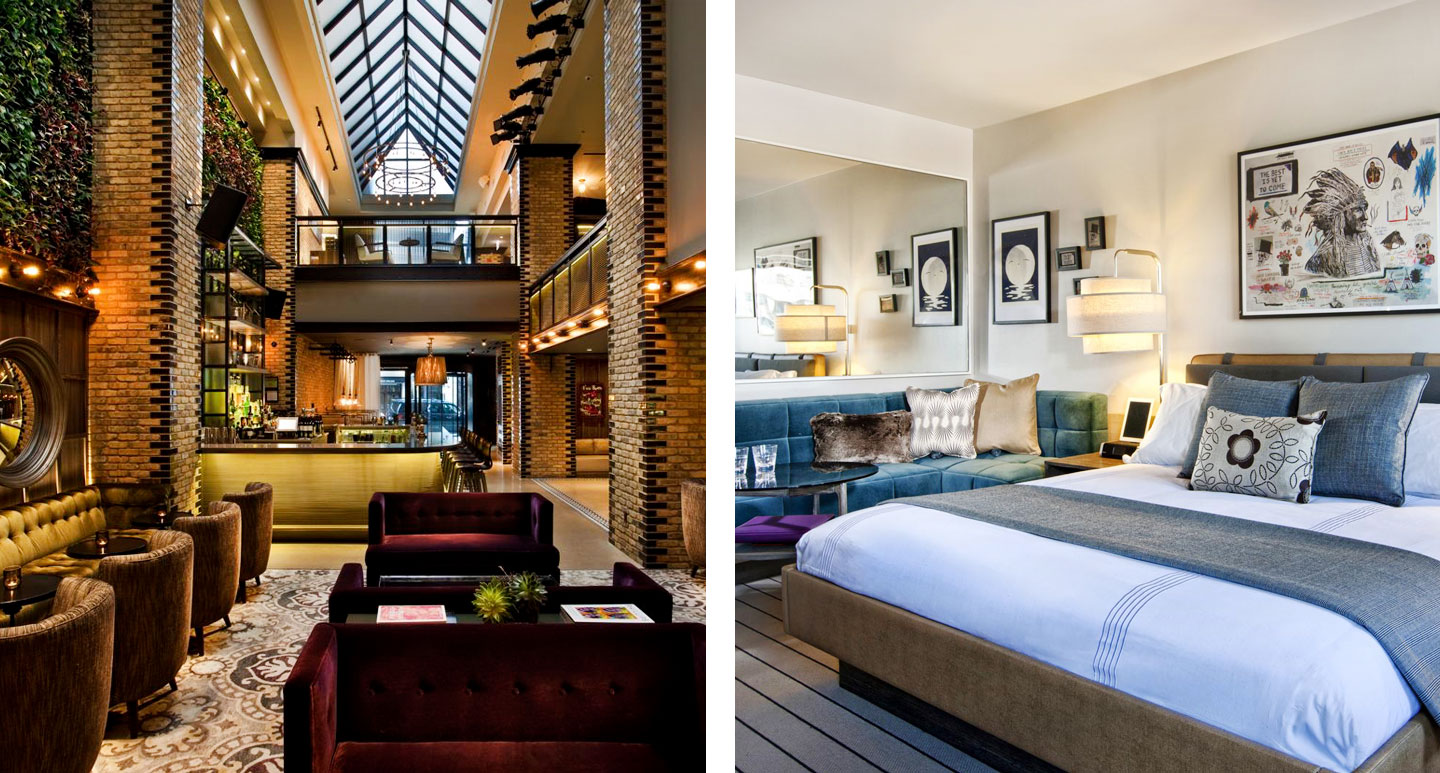 Equal parts classic, eye-catching modernism and inviting, magnetic public spaces, the Thompson Chicago takes the brand’s familiar boutique-hotel recipe and moves it into a quintessential location right in Chicago’s Gold Coast. Although the sharp interior design, luxurious thread counts, and an Italian restaurant by a James Beard–winning chef can cause a struggle to make it outside. 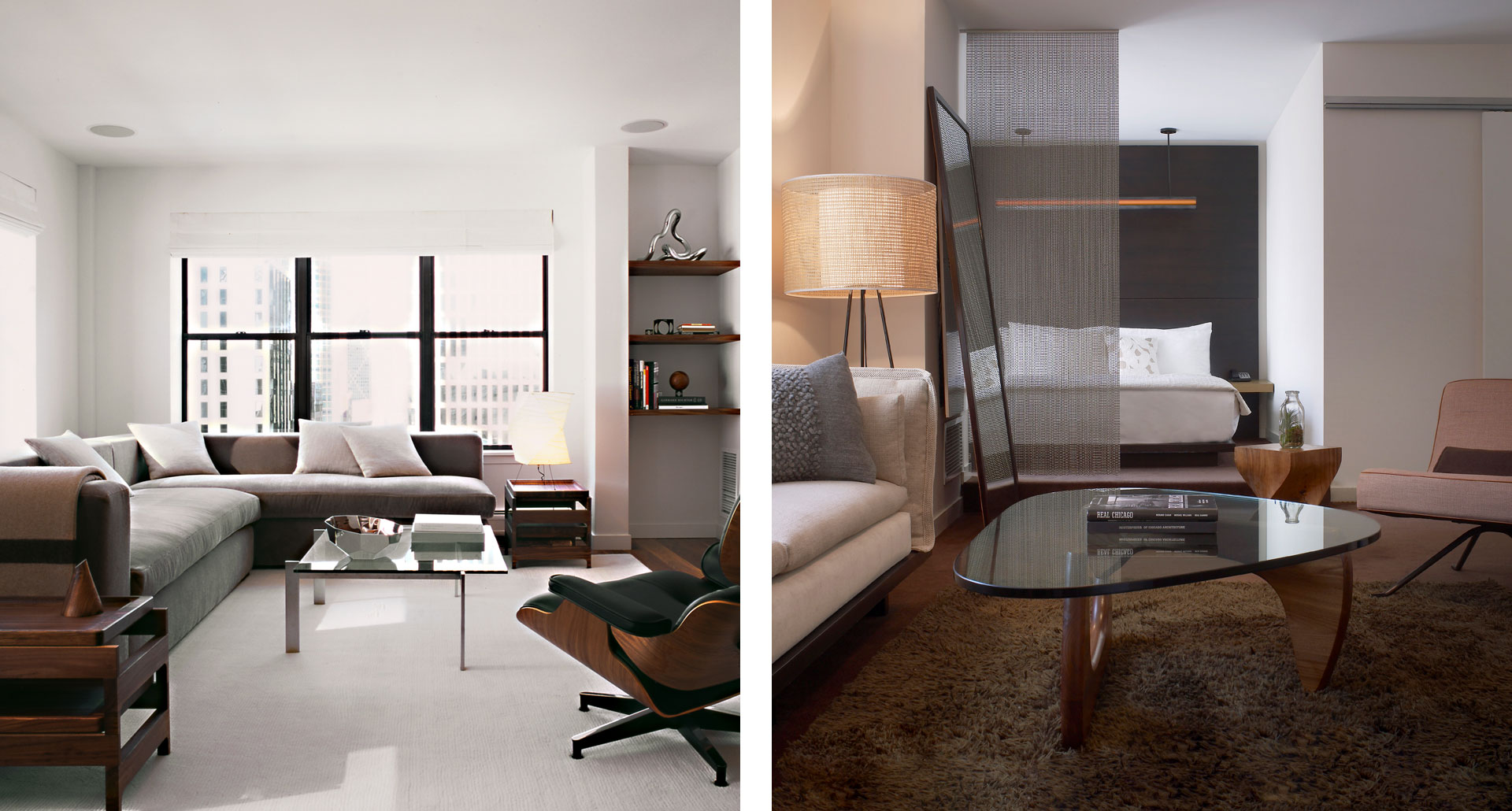 The idea behind the James Chicago is to provide more luxury than your average boutique hotel, and more style than your average luxury hotel. The rooms are swanky, the restaurant is a steakhouse, and you know you’re getting top-of-the-line fitness options when you consider that the hotel’s founder also founded Equinox.

See all of our boutique hotels in Chicago.