Tuscany isn’t all just vineyards and wine tours. With help from our friends at Atlas Obscura, we’re shedding some light on the hidden places, mysterious marvels, and curious oddities that often go overlooked in the region.

If you only get one vacation to Tuscany in your entire life, take a thousand wine tours. We won’t dispute that. Pretty much anywhere you stay will provide you with some of the world’s best wining and dining options. But once you’ve whetted your appetite, it’s time to discover that there’s more to the ancient region. All around you is evidence — some very well-hidden — of a history of religious obsessions, tortured artists, morbid curiosities, and outdoor wonders that are easy to take for granted alongside the staggering landscape of vineyards.

So in partnership with our friends at Atlas Obscura — the chroniclers of all things secret and overlooked across the globe — we’re bringing you a sober guide to Tuscany.

Vineyards don’t have a monopoly on fresh air in Tuscany

Wine’s not the only way to relax. The hot springs of southern Tuscany provide natural spots for relaxation, as the cascading thermal waterfalls reach nearly 100 degrees and create something like a massive network of outdoor hot tubs. There are at least three options in Tuscany (and Castello di Vicarello is near them all), but for mapping purposes, try: Cascate di Mulino. That’s the free entrance outside the main spa in Saturnia.

If you’re of a slightly more active mindset, you can find your way up the Torre Guinigi in Lucca to a historic hanging garden with spectacular views of the city or the Ponte Sospeso in San Marcello Pistoiese, an almost comically long suspension bridge over the Lima River Valley. In Vaglia, there’s also a beautiful renaissance garden dating back to the 16th century and featuring a massive Colossus statue.

But the pièce de résistance (or whatever is the Italian equivalent of that phrase) is the Pinocchio Park in Collodi — the very town from which Carlo Lorenzini took his pseudonym before writing The Adventures of Pinocchio. A beautiful green space opened in 1956, it’s full of Pinocchio-themed art and sculptures, including a ridiculous sea monster that kids can climb up for a view of the park.

If you’re begging for more Pinocchio history after that, the Oak of the Witches is a quick drive away, and is said to have inspired several Pinocchio adventures dreamed up by Collodi (like the time he was hanged by criminals — an episode that didn’t make it into the Disney movie). As you may have guessed, the giant, mystical-looking oak is also associated with witchcraft.

There are secrets in Tuscany’s art history

You’ll know to see Michelangelo’s statue of David and Botticelli’s Birth of Venus. But as at least one theory goes, Michelangelo, while in hiding from the powerful Medici family, filled a secret chamber under the Medici Chapels with sketches and drawings. While the work can’t be verified as Michelangelo’s, there’s enough of his style there that experts felt certain of what they were seeing when the room was discovered via trapdoor by an intrepid museum director in 1975. Officially open only to researchers in 2018, the room will open to the public by 2020 (and Atlas Obscura says exceptions are sometimes made, if you ask around). So if you’re the planning type, start planning. Otherwise, more immediately accessible is L’importuno di Michelangelo (Michelangelo’s graffiti), which can be found on a wall near the Uffizi Gallery in Florence.

Meanwhile, if you’re willing to entertain the thought of art by someone other than Michelangelo, we have to recommend you stay in a 14th-century villa called Residenza d’Arte (more on this below), or visit the Parco dei Mostri just outside of Tuscany, in Lazio. A sculpture garden unlike anything you’ve ever seen — and certainly the polar opposite of the traditional Italian Renaissance garden — it’s full of monsters. And it only takes a couple of sightings to see why this place appealed so much to Salvador Dali. (The garden was largely ignored until the Spanish artist’s short film about the place in 1948.)

Must see: the picnic table inside the massive, screaming “mouth of hell” sculpture.

Around the very time that Marie Tussaud arrived in England with her wax statues, the powerful Medici family’s collection of oddities was opened to the public at La Specola in Florence. It’s now among the oldest museums in Europe. But instead of nearly-real (or sometimes less so) statues of Beyoncé, the style of the day — still displayed there now, among other anatomical peculiarities — was wax models of naked women in “semi-erotic poses, but with their rib cages and stomachs open to the world.” Created by Italian sculptor Clemente Susini in the 18th century, it’s a style that the Marquis de Sade is said to have loved.

Once you’ve seen all you can stomach of the strange, ancient erotica of Florence, head over to San Gimignano in Siena and you can find the Museum of Medieval Torture, an all-too-apropos collaboration with the nearby Museum of the Death Penalty. If the phrases “inquisitorial chair” or “heretic’s fork” intrigue you, maybe keep that to yourself. But also go see them. Other attractions for the morbid? A saint’s somewhat well-preserved severed head in Siena, a naturally mummified peasant girl in Lucca, and the creepily-named but surprisingly hopeful Hospital of the Innocents back in Florence.

When you think Tuscany, you think big, stone villas, extravagant castles on hilltops surrounded by vineyards and farms. Our favorite Tuscan lodgings certainly follow that old blueprint, but they bring a distinct twist to the format with bold concepts, designs, and particularly mind-blowing amenities. Although we do admit — you can get as weird as you want in Tuscany, but the traditional vineyard experience is never out of reach. 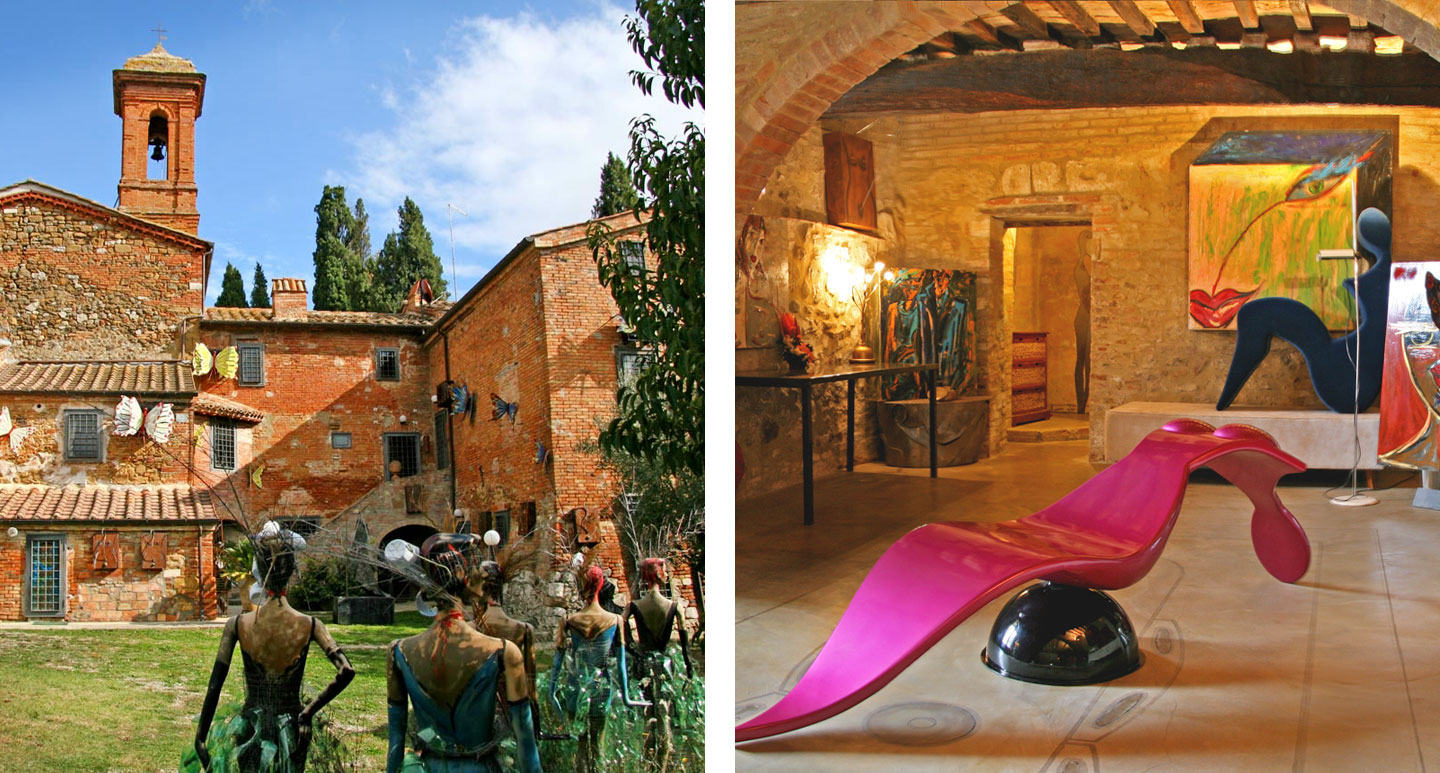 The brainchild of Italian sculptor, painter, and interior designer Anna Izzo, forget trips to the Duomo and St. Peter’s, the Relais Residenza d’Arte is a destination in itself. Brimming with art inside and out, whether you’re in the guest rooms or the sculpture garden, staying here is something like spending the night at the world’s coziest modern art museum. 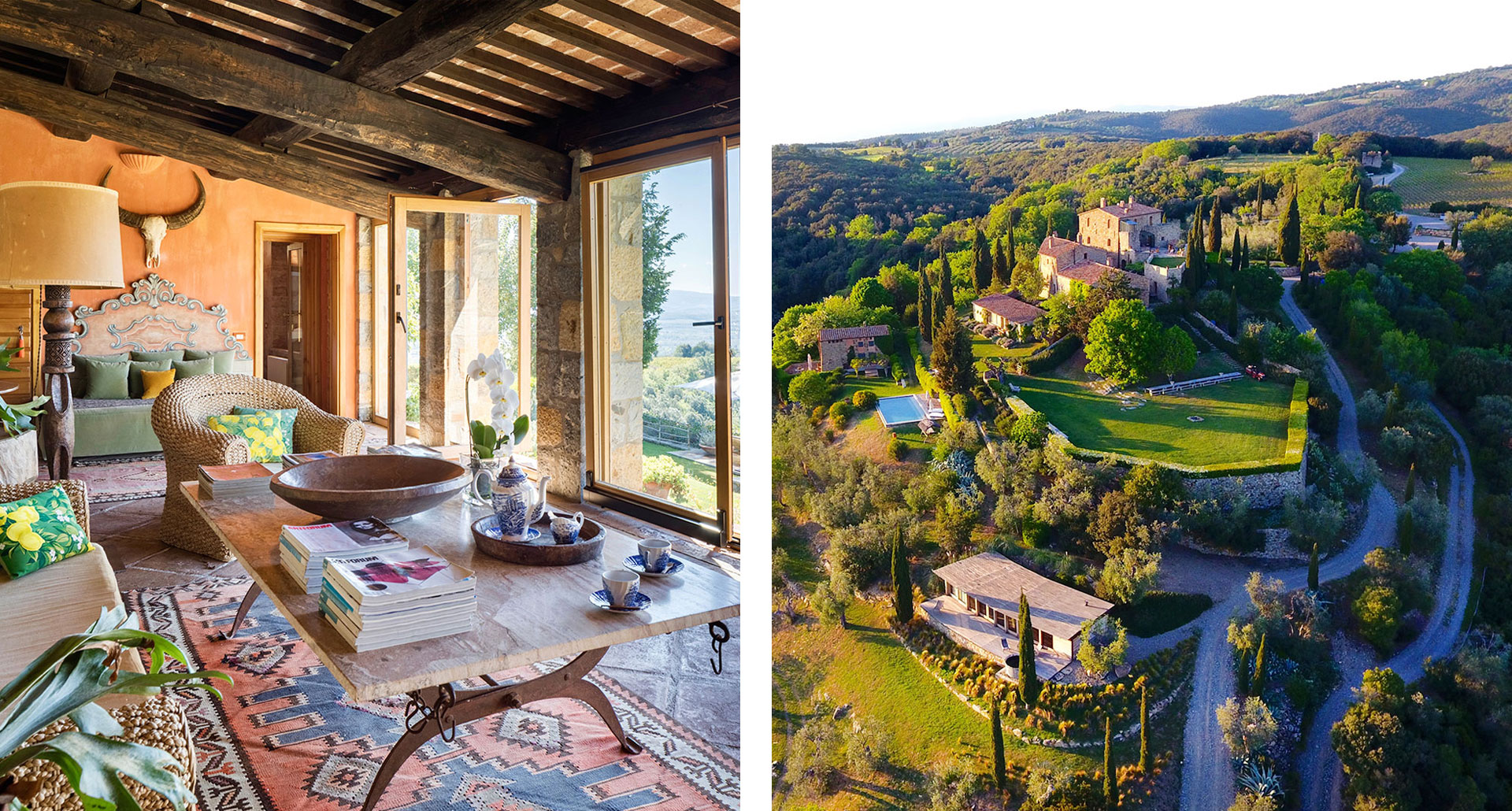 An authentic 12th-century castle turned charming country boutique, we might define Castello di Vicarello by its picturesque location, set on a hilltop away from the crowds (and, as we noted, in driving distance of three natural hot springs). Family owned and renovated, the experience is akin to that of a house guest rather than a hotel patron, although the two pools overlooking the Tuscan countryside are worthy of any five-star resort. 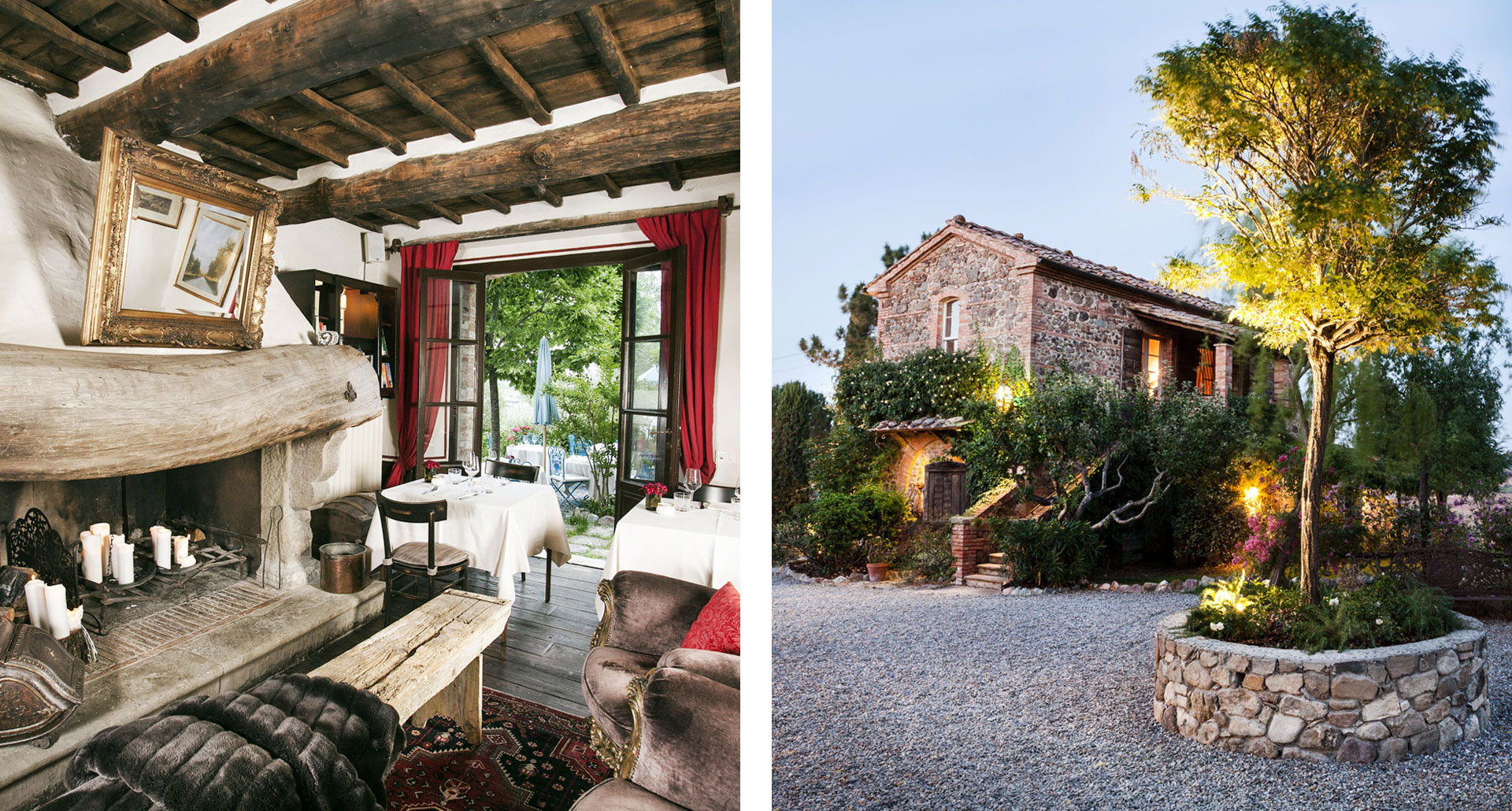 Five carefully renovated historical structures make up the rooms at Lupaia, a small property with farmhouse charm oozing from every pore. Case in point: the daily four-course dinner sourced from the hotel’s own organic garden. Excellently located, there’s plenty to do whether you’re looking for wine or a historical jaunt through the ancient town of Montepulciano. 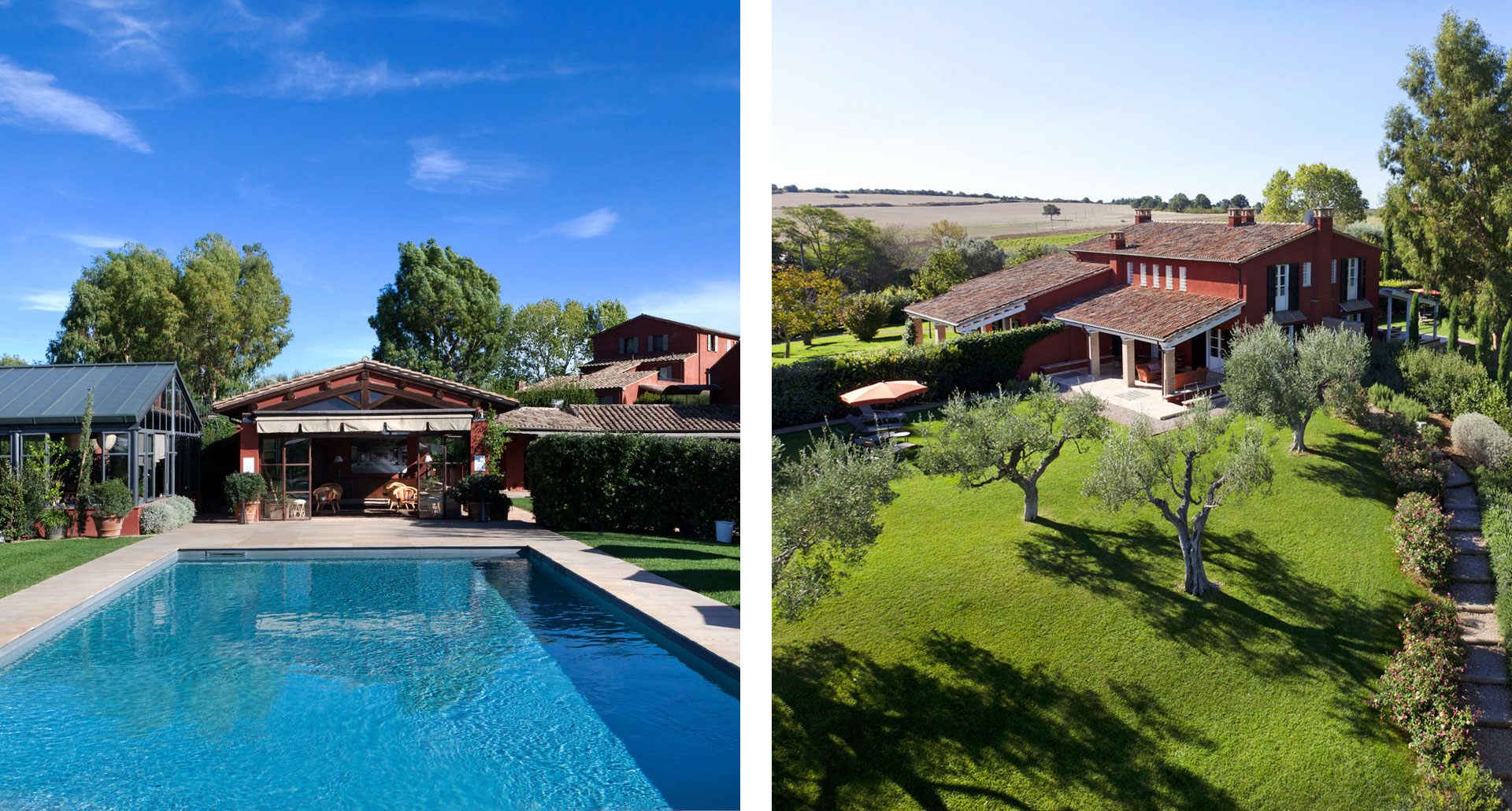 If not for the half-timbered ceilings and views of the farm, you might enter your suite at Locanda Rossa and think you’re in a modern urban apartment. Then again, what kind of city dwelling has access to a spa and wine bar as well as beaches and countryside? 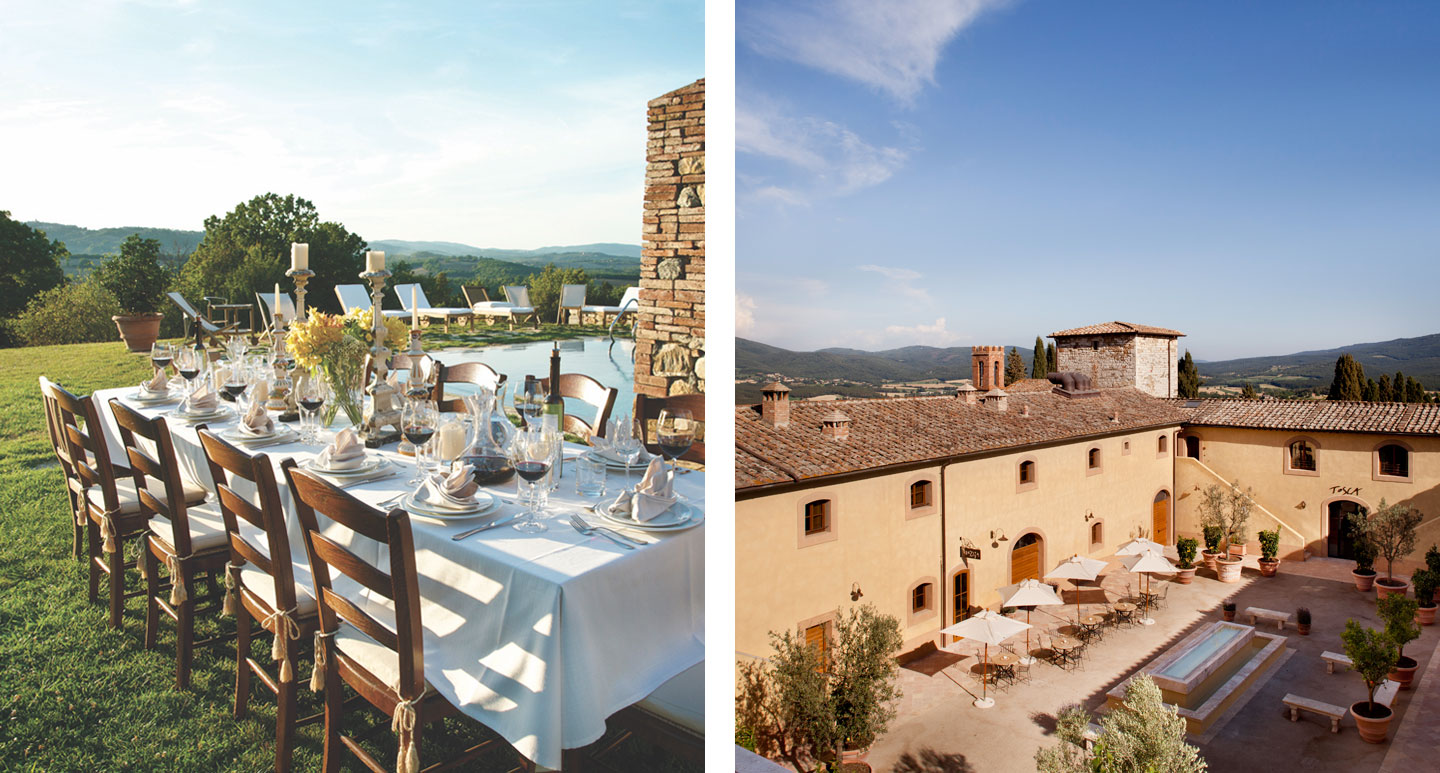 Castello di Casole makes its home on a thousand-year-old aristocratic estate, but one that’s been meticulously restored by an American ownership team and an army of Italian designers and architects. But even in Tuscany, Castello di Casole stands out for its food and wine. There’s no better place to learn about the flavors of Tuscany than the cooking academy and the vineyard. 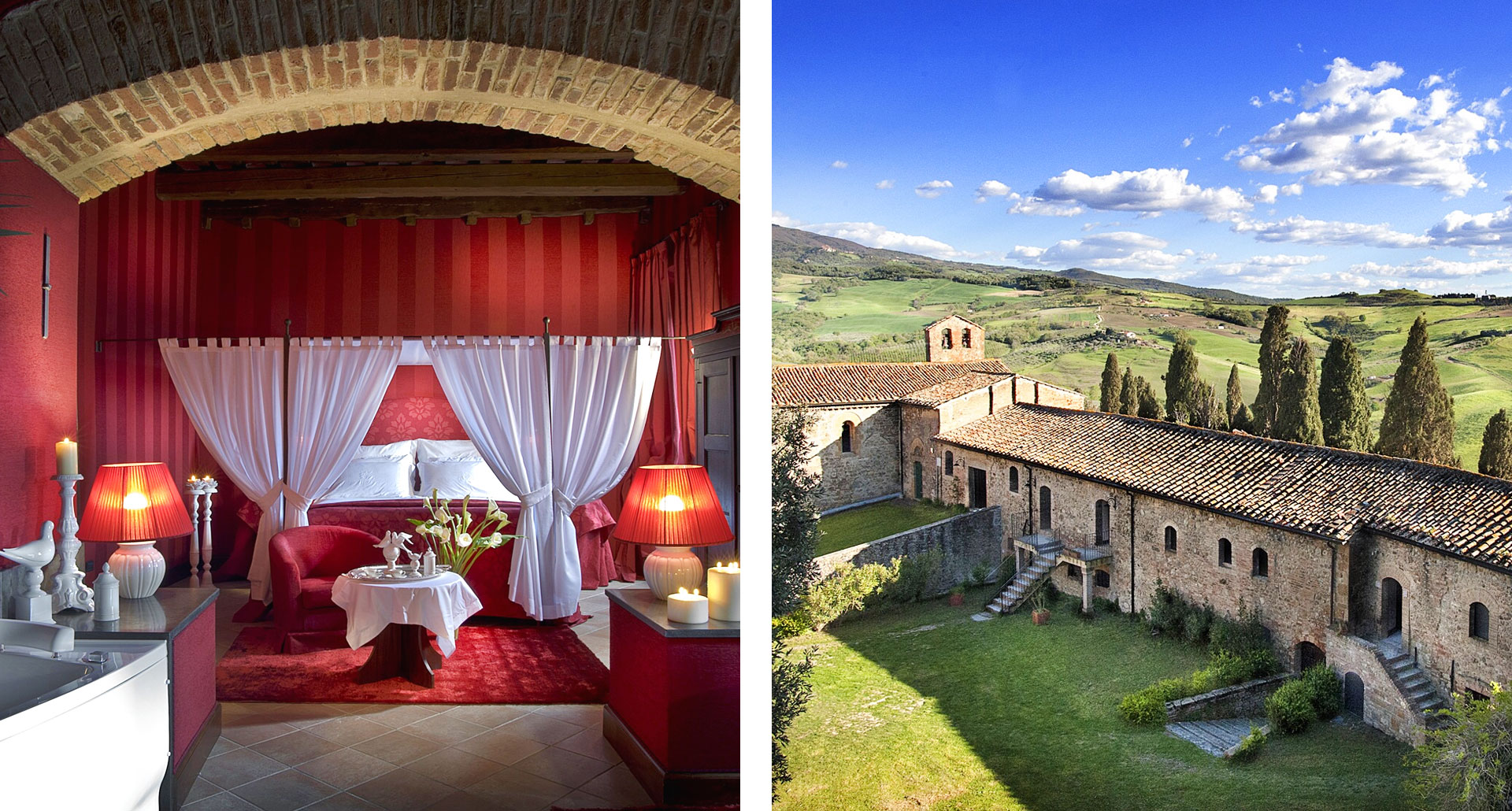 If you’re interested in Tuscany but not in wine, Castel Porrona Relais & Spa has you covered. While your partner gets an actual wine bath, you can opt for the olive oil tour. Rent the entire castle or a humble room, with “humble” in air quotes: everything in this 900-year-old abode has been updated to high-end luxury. 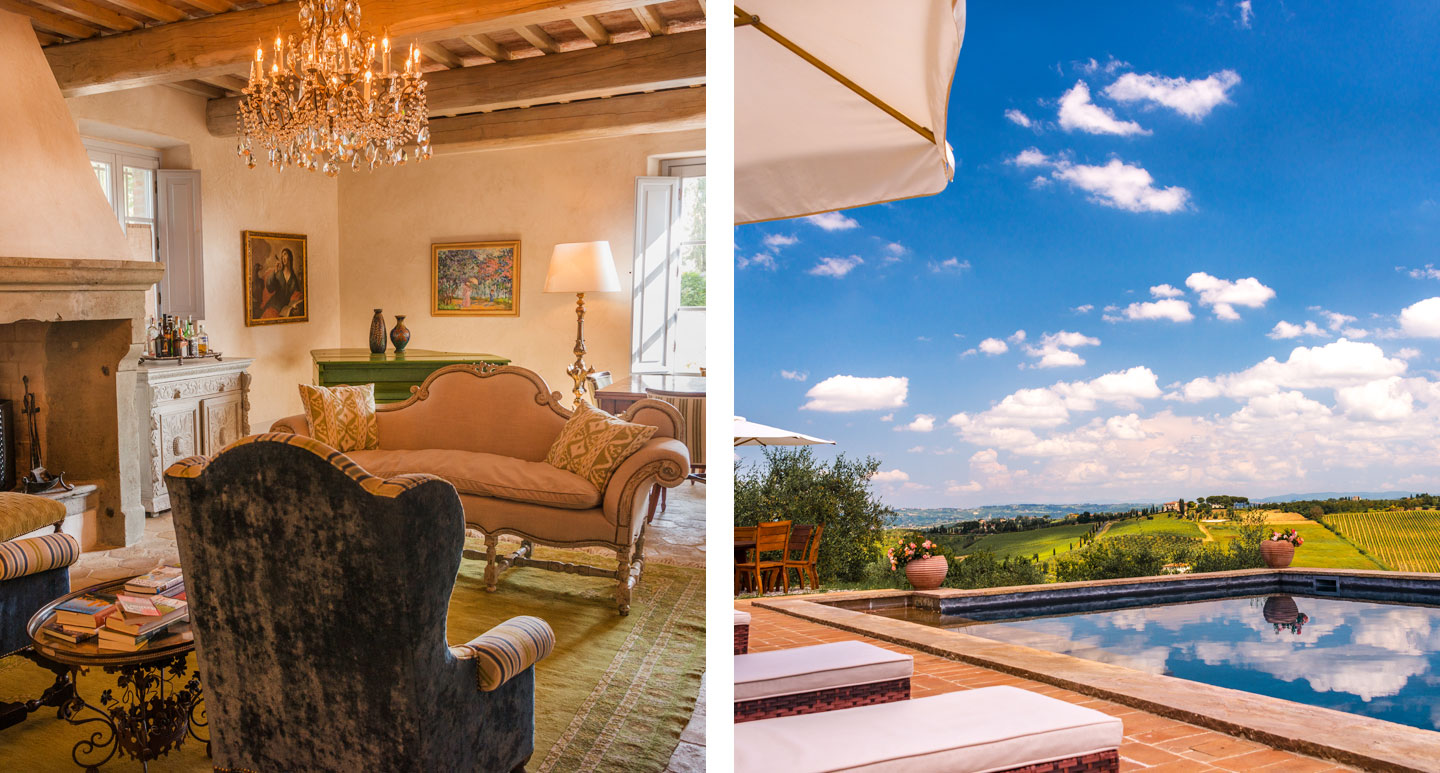 Locanda dell’ Artista takes the classic Tuscan bed and breakfast, surrounded by vineyards and olive groves, and does it so well it’s almost a new style. The farm cold-presses its own olive oil, the kitchen harvests its own produce, and the cellar provides an embarrassment of fine Italian wines. Furnished with a blend of period architecture and modern artwork, it’s full of sophistication and calm (related: the “no children under 14” policy). 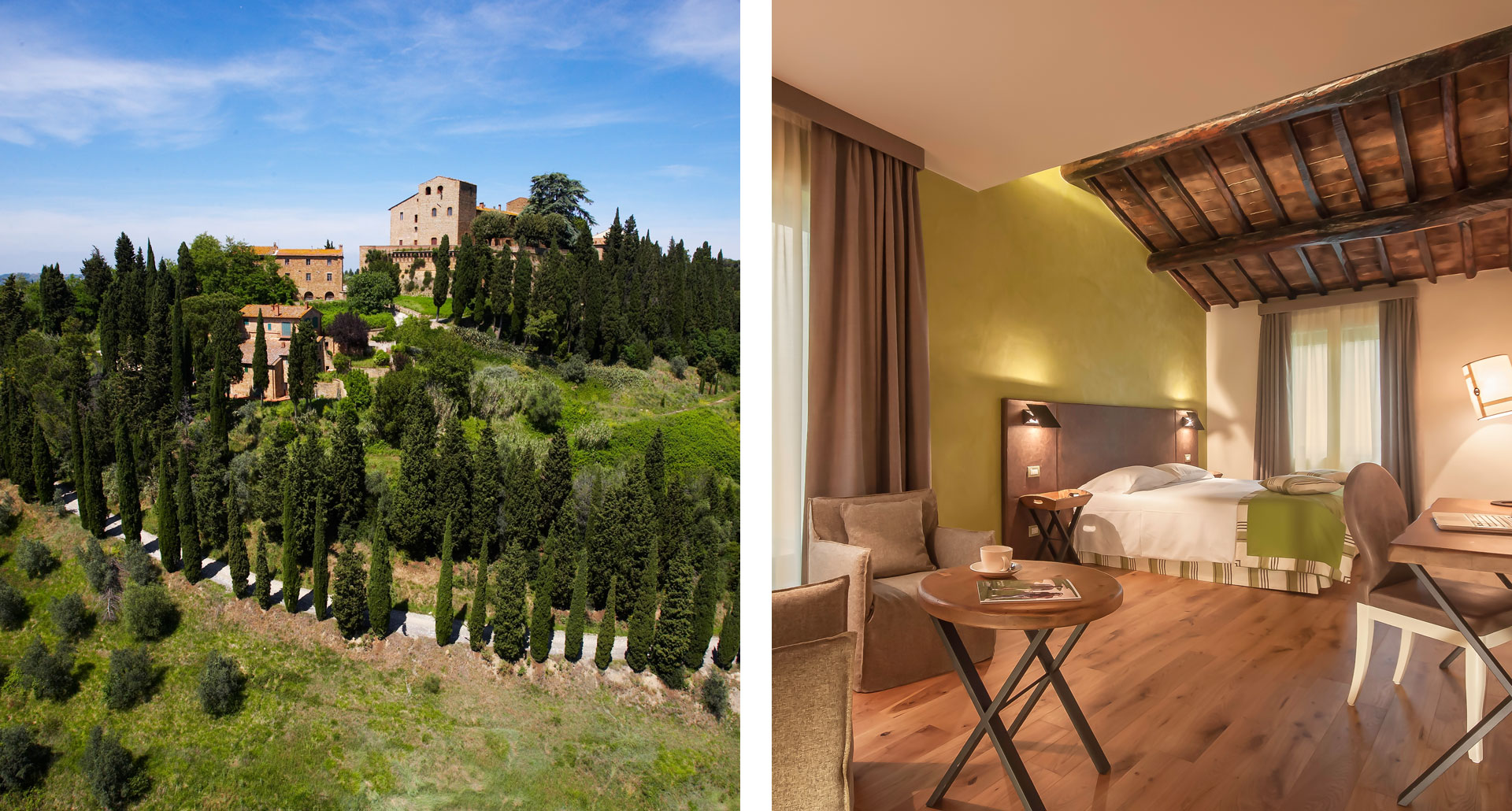 If you’ve already sounded out the name, it won’t shock you to read that La Tabaccaia is a former tobacco factory. Although, in a delightful irony to set your expectations, the hotel is 100% non-smoking. Nonetheless, sitting as it does on top of a hill, sporting original wooden beams and intricately tiled ceilings, the hotel is every bit as romantic as an old restored winery. 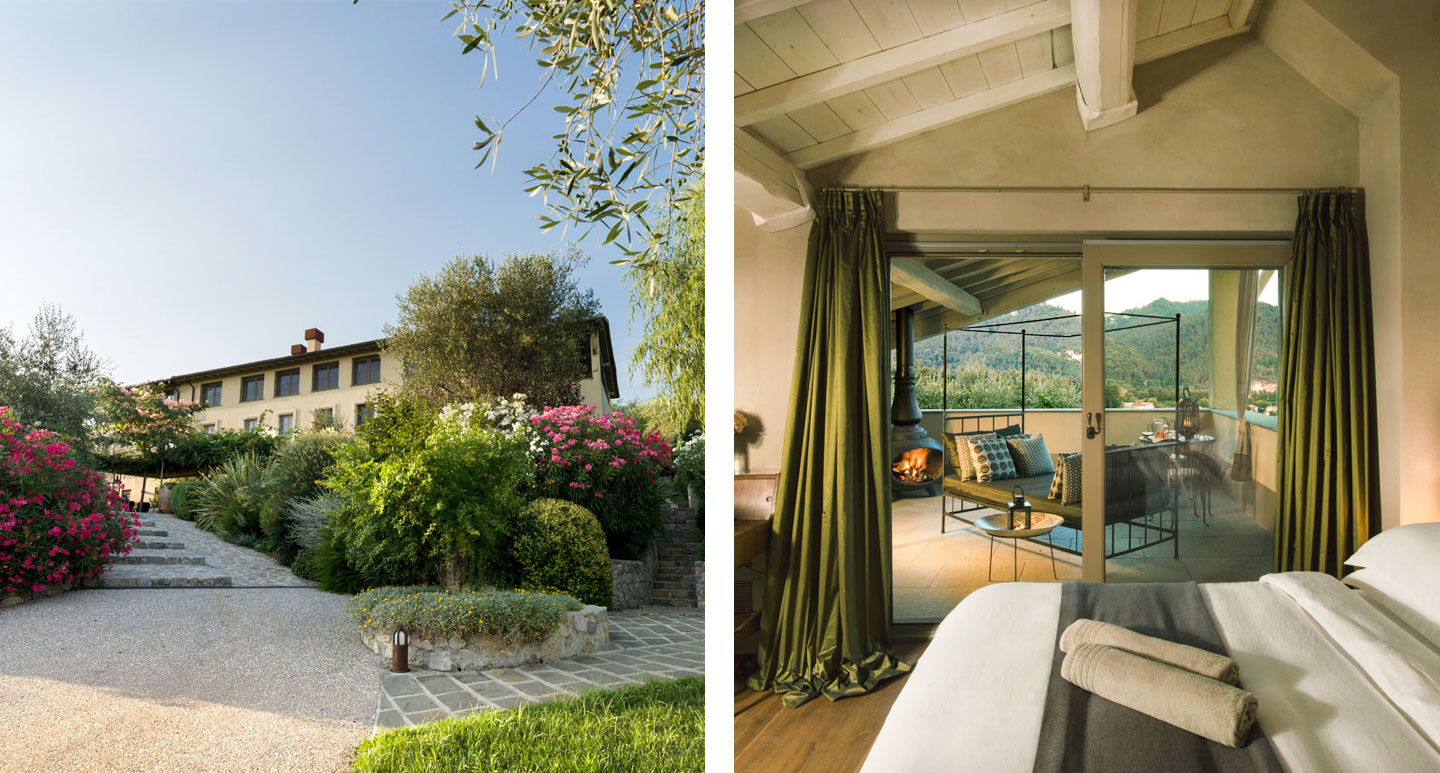 Locanda al Colle ranks intimacy over opulence, giving the feeling of a delightful guesthouse in a forested hillside. In lieu of television, you could spend hours gazing out of the huge picture windows or luxuriating in the massive soaking tubs. We should also mention the location, in the seaside town of Camaiore, and the fantastic beach club you’ll have access to as a guest. 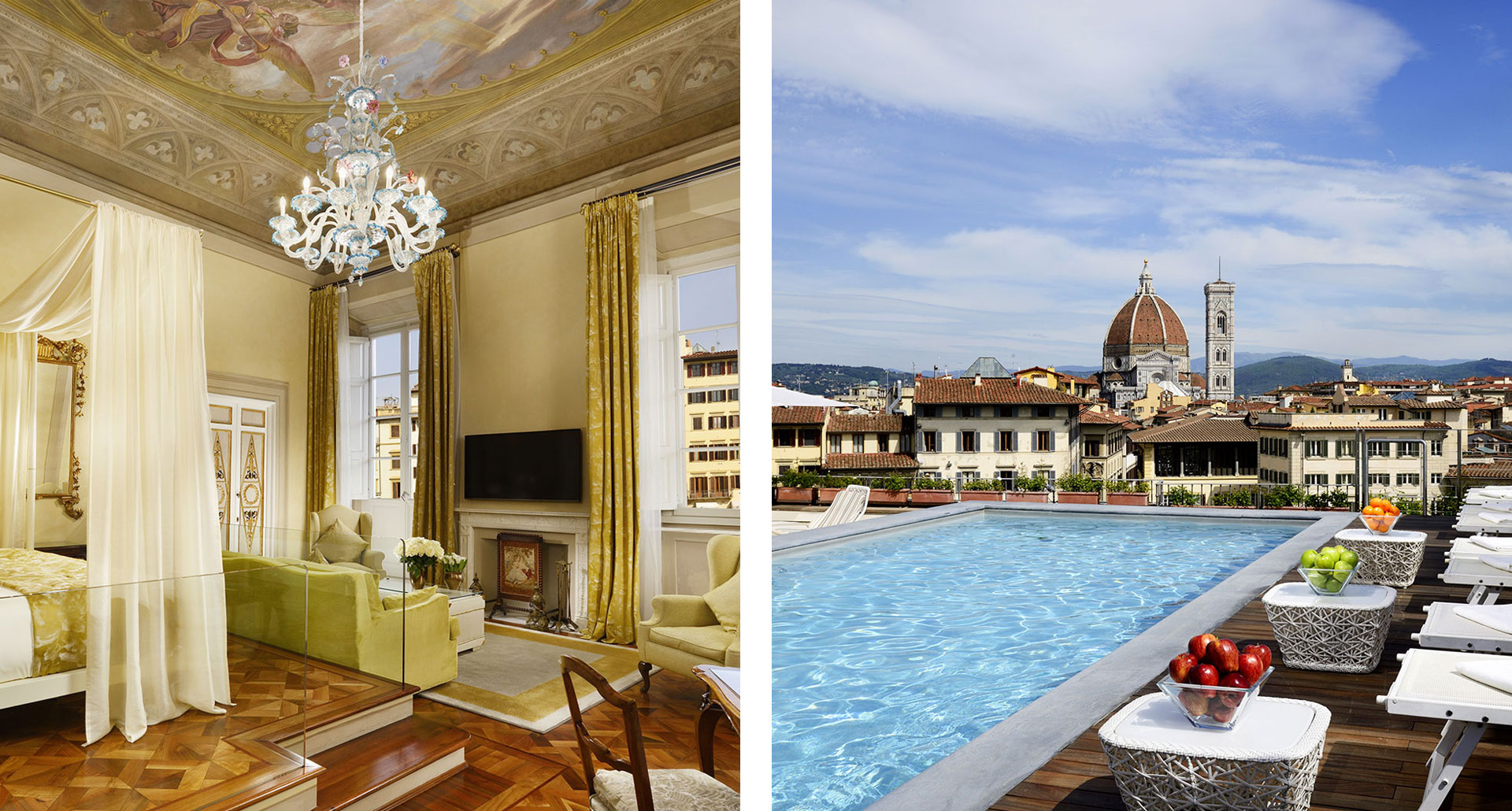 When it’s time for a trip back from the countryside into Florence’s city center, such local novelties as a rooftop pool can help ease you back into the ebb and flow of life in the metropolis. The Grand Hotel Minerva dates back to the 19th century, although recent renovations give the location an especially fresh blend of classical grandeur and mid-century glamour.

See all of our boutique hotels in Tuscany.