The advent of springtime in New York can feel like a revelation, but it’s nothing compared to what happens when Montréal, North America’s most European city, finally comes out of the annual deep freeze.

The advent of springtime in New York can feel like a revelation, but it’s nothing compared to what happens when North America’s most European city finally comes out of the annual deep freeze. Montréal is as old as Boston, as chic as New York, as freewheeling and festive as New Orleans, and as progressive as Portland — and it does it all in French, just for the added style points.

Scroll to see our top Montréal hotel picks — all of which happen to be Tablet Plus hotels, which means upgrades and special privileges for Plus members who book on Tablet.

First Nations history stretches back millennia, but it was the Saint Lawrence Iroquoians that Cartier encountered under the aegis of New France in the early-to-mid 16th century. French colonizers named the island city Ville Marie — still the name of the borough comprising Old Montréal and its immediate vicinity — though many believe “Montréal” derives from its triple-peaked hill, Mount Royal. The Treaty of Paris granted control to the British, who swelled its ranks with hopeful fur traders and American colonial Loyalists, birthing the fascinating Francophile-Anglophile tension that persists to this day.

The city as we know it incorporated in 1832, weathering political tension, the rise of industry, Prohibition-era “Sin City” establishments, world war, and separatist sentiment as it found its footing as French culture’s North American capital. These days it shares the island with affiliated municipalities, somehow both infrastructurally linked and fiercely independent.

Situated on an island at the intersection of two major rivers, Montréal has always enjoyed bustling trade traffic, and with it, a steady flow of artistic and architectural influence. It’s a city of seasonal extremes, to be sure, and thus one which proudly braves capricious weather even as it sets new standards for comfort and innovation in its interiors. A slice of Old Europe, some call it, replete with cathedrals and ecclesiastical ornamentation, but also gifted with forward-looking Art Deco resplendence, swaggering skyscrapers, even some Brutalist masterworks like the distinctive Habitat 67. A profusion of public parks keeps the whole thing walkable, which in turn allows for a kaleidoscopic procession of style as one navigates the streets: here curvilinear contemporary, there respectably residential, over there neo-classical.

Arrival by plane or train is fairly self-explanatory, but don’t deprive yourself of the unique pleasure of a cycling tour: more than 500 km of paths make two-wheeled transport quite feasible. For an even more magisterial take, opt for water: vessels of every description ply the river, and the canal is perhaps best experienced via kayak. Be aware that calèches — horse-drawn carriages — are the subject of some animal-rights controversy, quaint as they may seem. Pack for whimsical weather. New Yorkers should expect fewer concessions to pedestrians than they’re used to.

The time is ripe and the people show it: Montréalers make the most of the summer by gallivanting outdoors at all hours. You won’t hurt for options: sidewalk sales (vente de trottoir) entice the eye with trinkets, wearables, idiosyncratic performances, and indulgent street eats, while foodies will encounter an embarrassment of riches, usually in the form of festivals like Les Premiers Vendredis (First Fridays). Post up at any of the city’s famous terrasses for the dictionary definition of an al fresco brunch or happy hour. It’s one of those glorious coincidences that walking it off also lets you appreciate Old Montréal’s extravagant façades all the more.

Staying near the water is generally advised, for the views as much as the cooling breeze and the funky park traffic, but every one of these could serve as a poster child for Montréal’s reputation as a design destination: 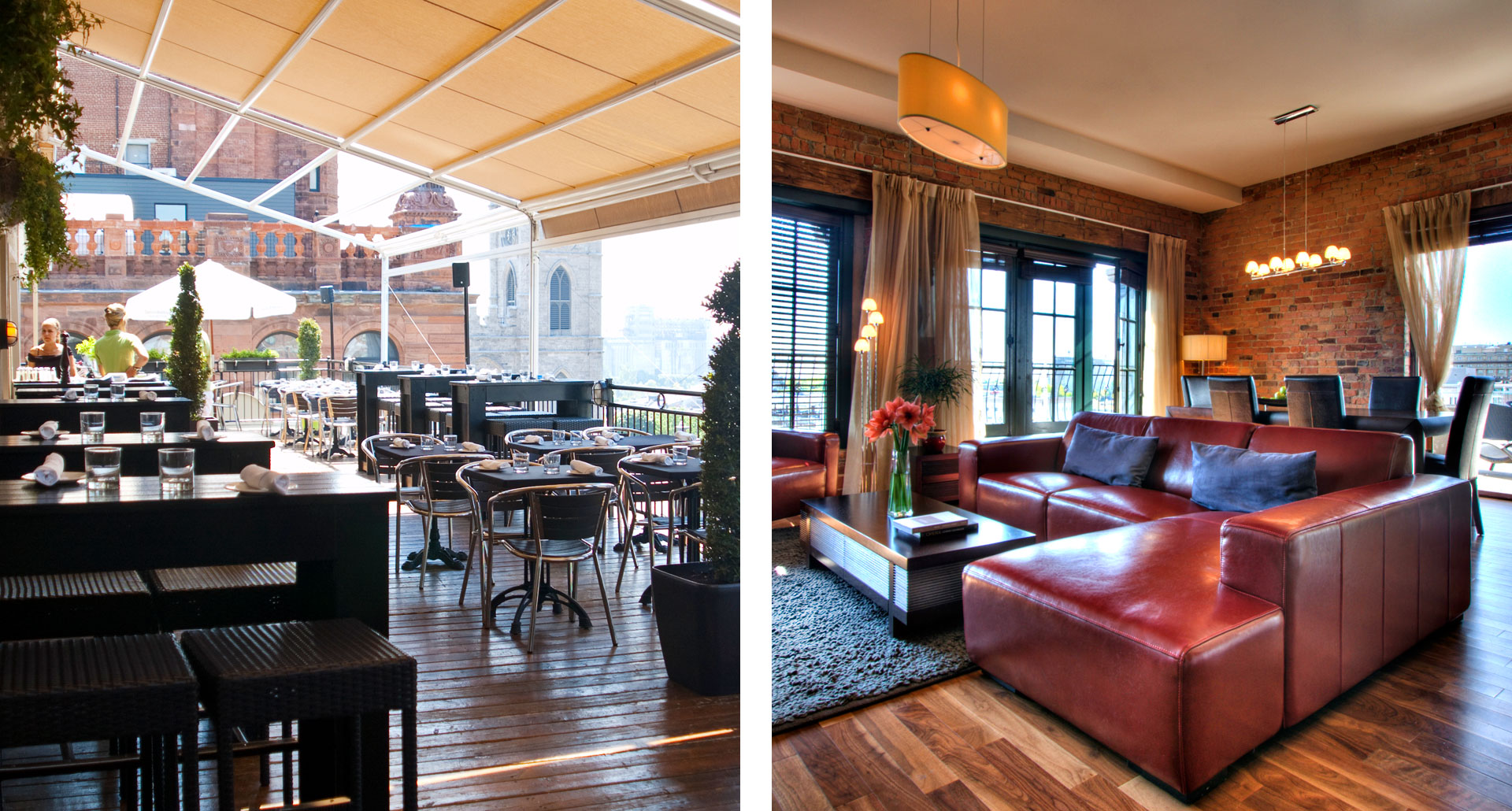 History is distilled to its pure essence in this renovated 19th-century gentleman of an edifice, which balances exquisite period flair with crowd-pleasers like standalone tubs or the neoclassical brasserie. All this is balanced, of course, by a fine-tuned sense of contemporary style and comfort, all the better to rest and recharge after a humbling afternoon drenched in the Gothic Revivalism of the nearby basilica. 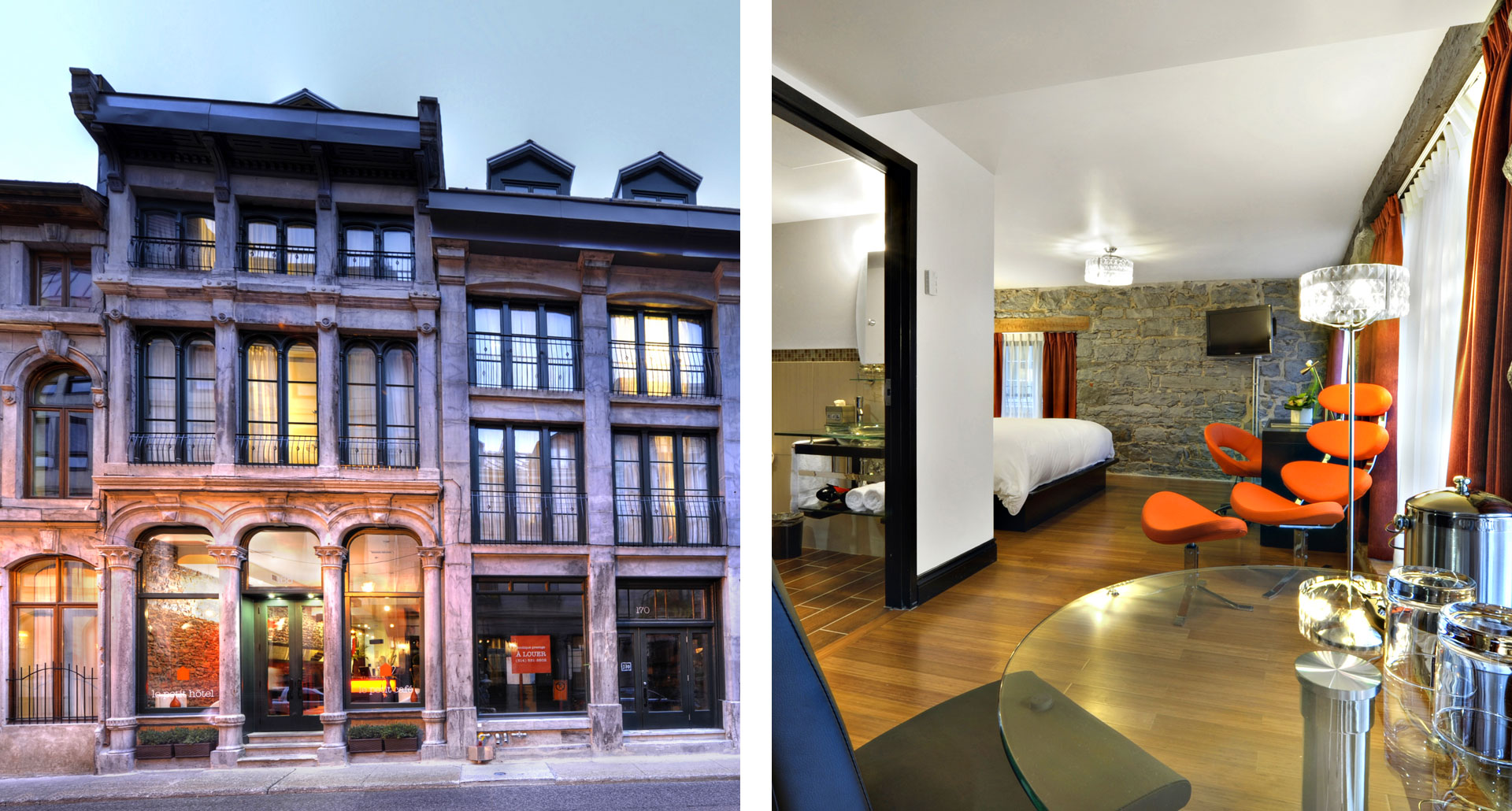 Small in stature, sure, but that just concentrates the delicious bohemianism all the more. Sister to Auberge du Vieux Port and Hotel Nelligan by way of the Antonopoulos Group, this little number happens to be long on location, optimally located at the historic heart of town. It’s the kind of place where the front desk doubles as a bistro-bakery and the windows come glamorously arched. Good things come in small packages. 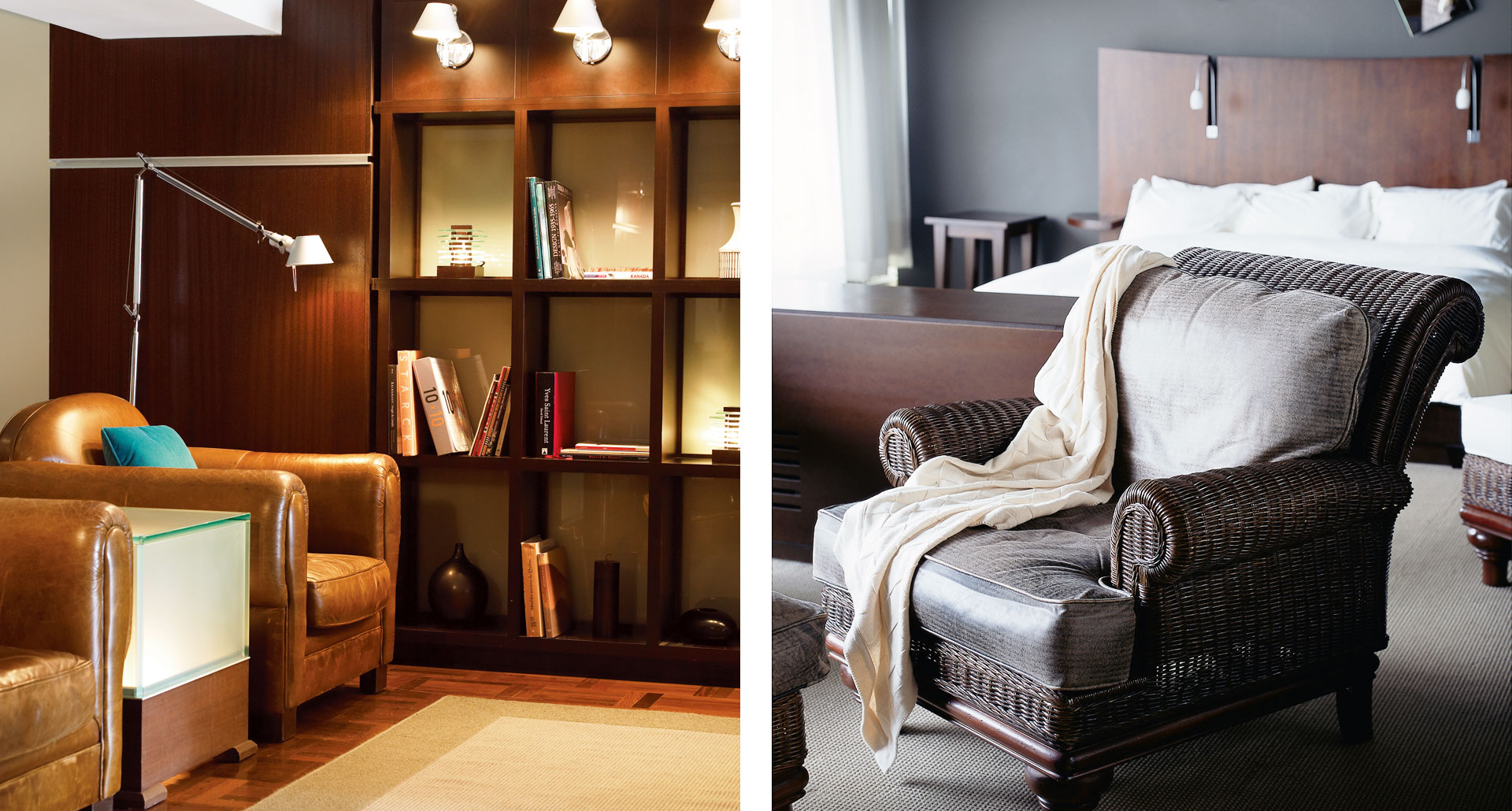 One of the original Tablet hotels in town is still going strong — le Germain led Montréal’s high-concept hotel revolution and transformed its staid environs into the urban destination it has since become. Haute Québécois touches abound, from just-right cappuccinos at the bar to gymnastic gastronomy at Le Laurie Raphaël. Everyone loves a good origin story. 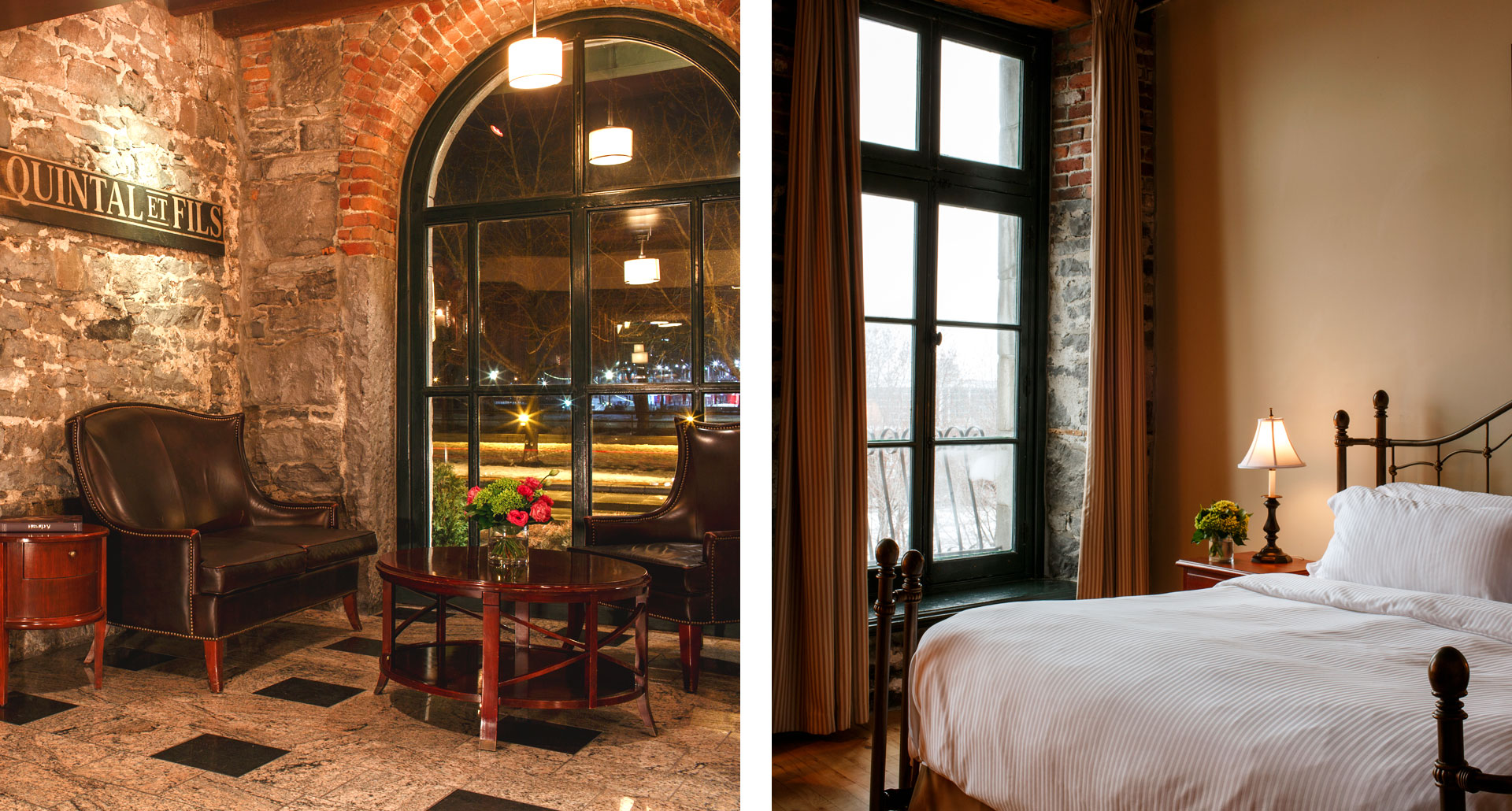 For maximum walkability, situate yourself right where Old Montréal’s charming Continentalism reaches its zenith within spitting distance of the Promenade (and, past it, the glorious river). The 1882 building is of suitable vintage — bricks and timbers well in keeping with the cobblestones outside — and is constructed such that nearly every interior rewards the eye, with views of the Old Port, the rustic cellar’s accoutrements, or the city at large from the rooftop terrace. 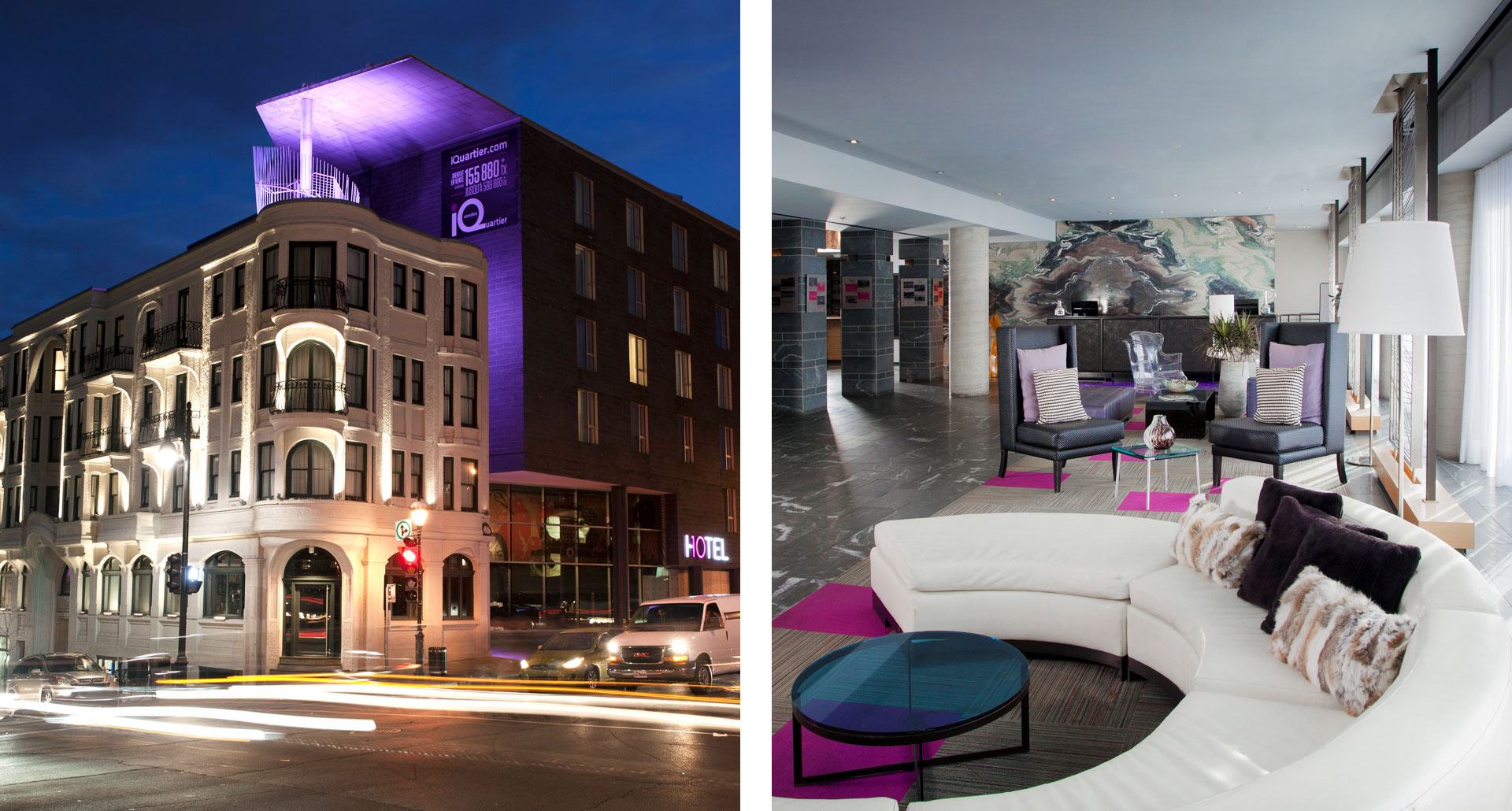 10 as in the address on Sherbrooke Street West, not the hotel’s rating on a 10-point scale, though these Art Deco–inflected spaces might quickly convince you otherwise. Indeed, the spirit of optimistic Modernism informs just about every design decision throughout this centrally located boutique. You’ll hardly miss the old quarter, though it’s hardly a strenuous walk when the mood strikes. 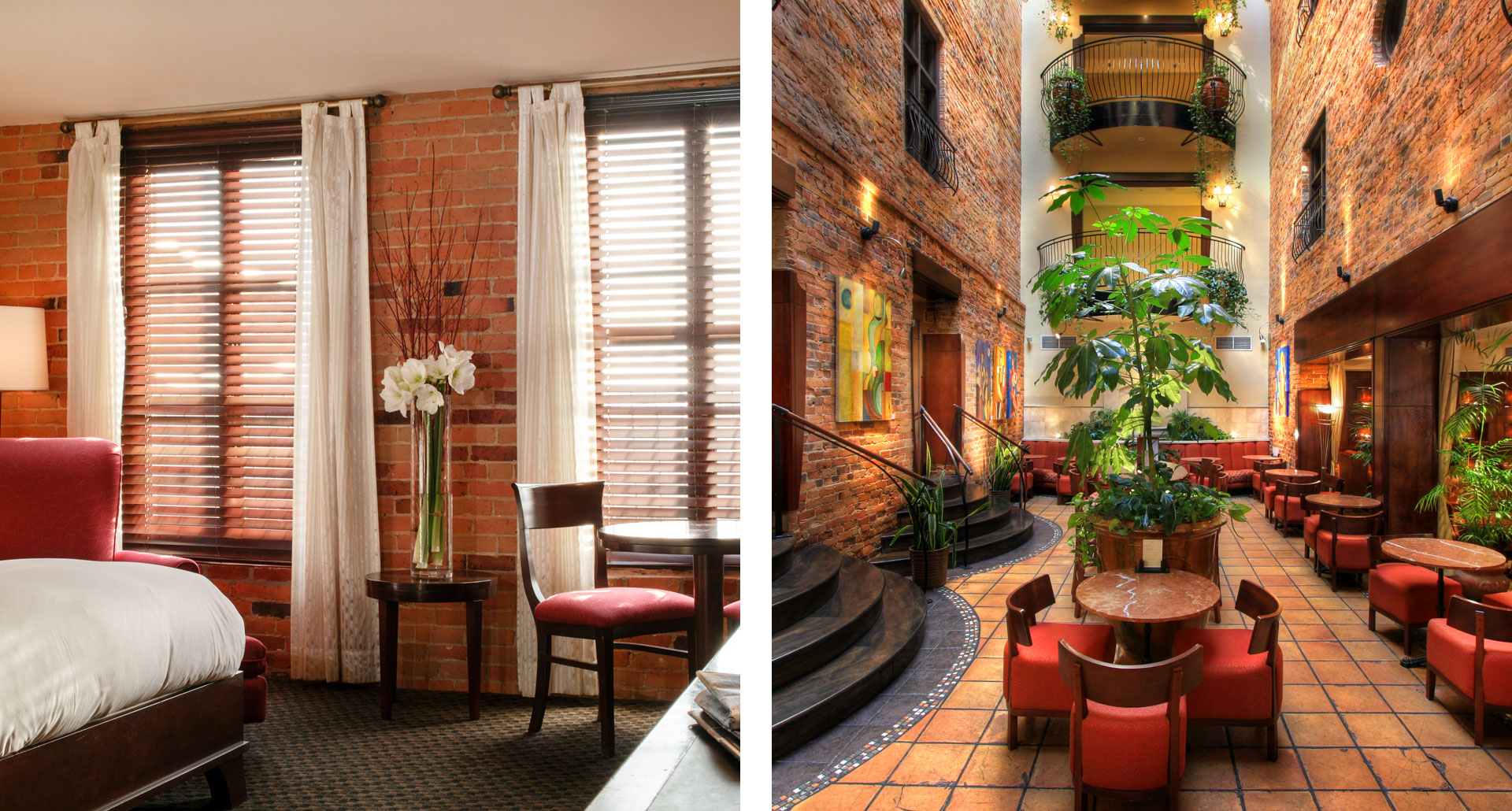 More than just a cute name, the Nelligan celebrates one Émile, a francophone Symbolist poet in the vein of Verlaine and Rimbaud. How’s that for a hometown hero? Rich, sensuous textures — leather, motley brick, brooding wood — accordingly take center stage, upping the swoon-worthiness considerably. You’ll want the private terrace to fully inhabit the role, cupping an unctuous red as you consider the timeless verities or some such. 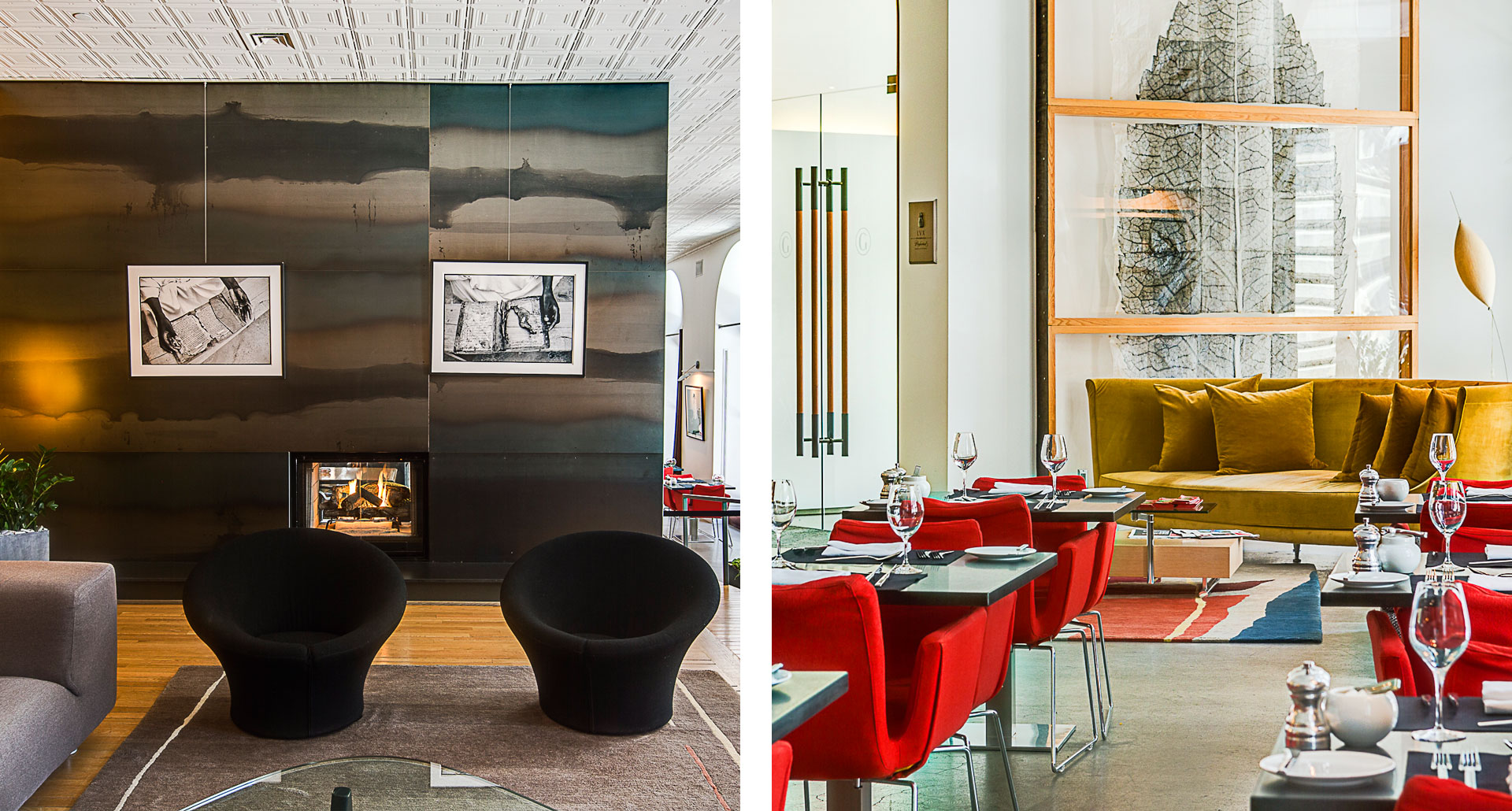 The history never ceases to surprise: what was once a carpet factory finds new life as a bold, strikingly Modern boutique. Vivid palettes and swoopy furnishings hold spirited conversations in the rooms, smartly balanced overhead by airy, lofted ceilings. Rest assured, in every sense of the phrase, that it’s all designed to maximize comfort; Gault may seem the consummate showcase, but as with most successful hospitality design, warm humanism wins the day. 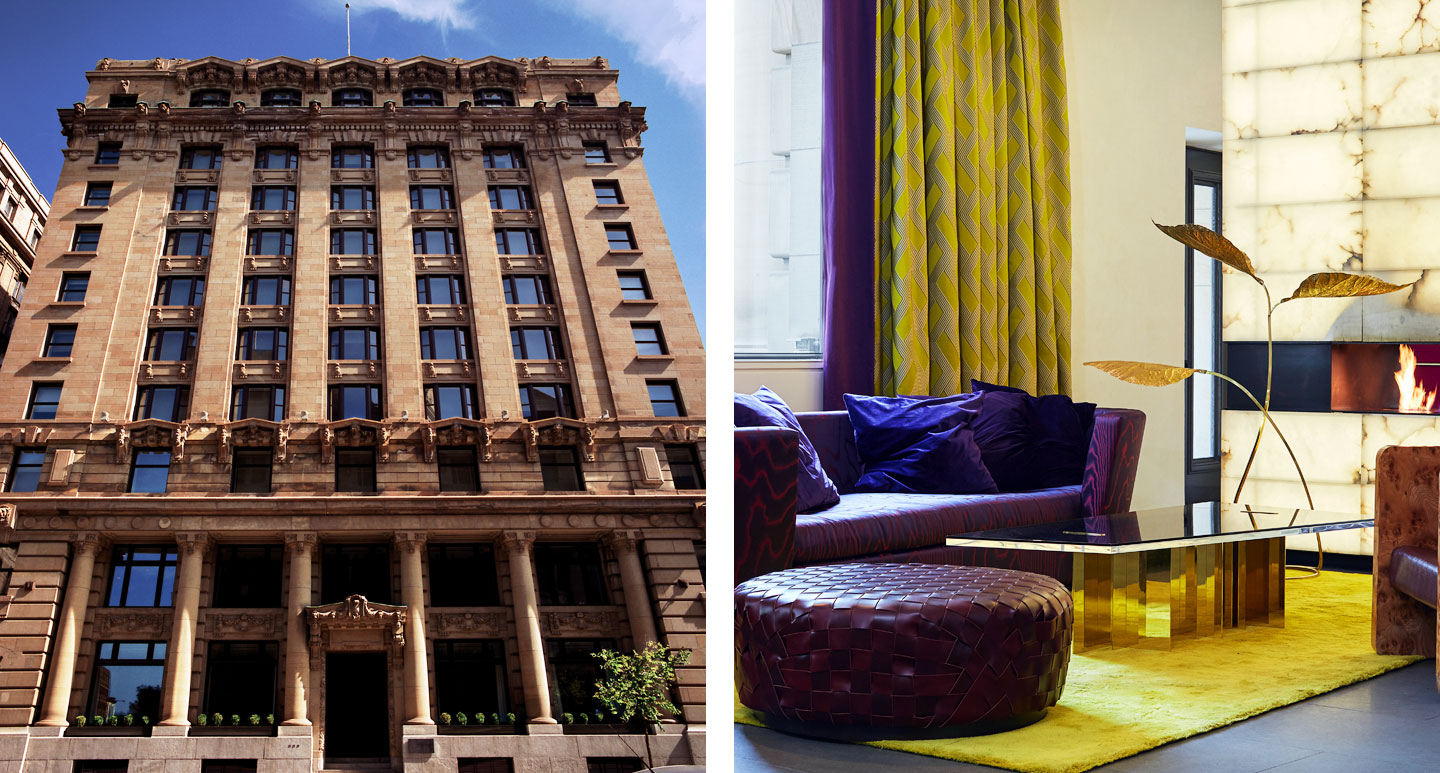 The façade makes our argument for us, does it not? In what’s fast becoming a trend, though, it merits mentioning that the interiors of this Beaux-Arts landmark switch gears entirely into clean minimalism, deftly undercutting any expectations of stuffiness or stodginess. Of particular note is Hambar, which — knock us over with a feather — works culinary magic with ham in addition to house-made pasta and fresh seafood. Put another way: it’s a big hit with the locals.