When we heard that Kanye West was talking about adding “hotelier” to his already overstuffed résumé, we thought there’d be no time like the present to arrange an interview. But even though we’re arguably the world’s experts on unique and extraordinary hotels, we weren’t able to make it happen. Nothing personal, he’s a busy guy; we’re happy to pass along some inspiration in the form of an open letter instead.

We’ve heard rumors that you’re thinking of getting into the hotel game. Obviously, that’s a conversation we’d like to have. We’ve noticed over your career that you never do anything halfway — and, like the best hoteliers, it seems you’ll never rest until you’ve got all the details just right. But in the spirit of open collaboration — and because we love nothing more than offering our advice on how to make travel a transformative experience — here are the hotels you should look at for inspiration. Each one offers something unique that we think you, in particular, will appreciate. And if you could somehow put them all together, you’d be unstoppable…. 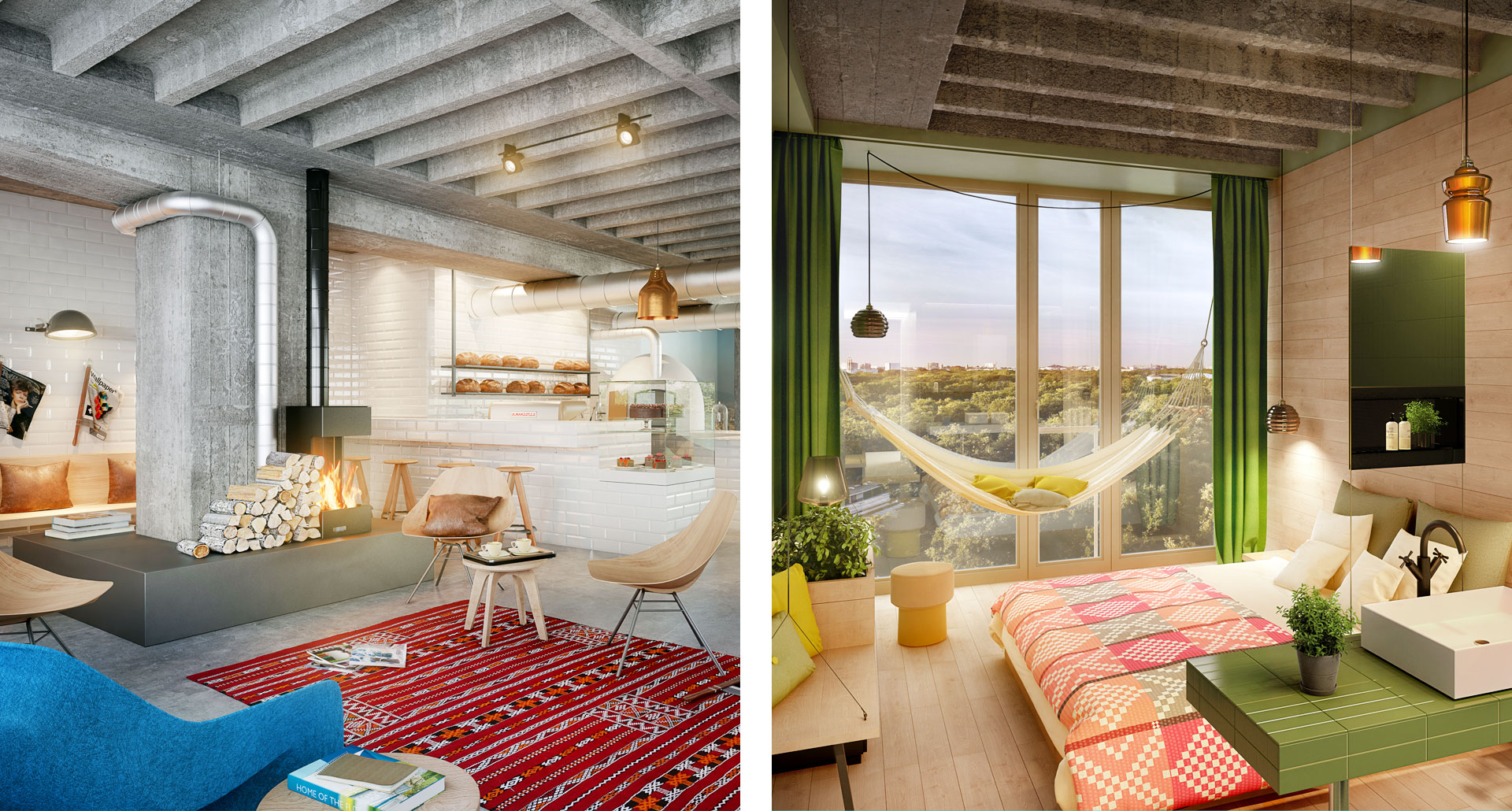 Like your music, Berlin’s 25hours is a master class in weaving together disparate threads: a bit of pastoral calm in its entry to Tiergarten Park, a very chill rooftop bar scene, a pulsating lounge for a musical interlude, a high-end but down-to-earth burger joint, and everywhere a hint of the brutalist concrete office block it all sprung from. No shortage of ambition here. 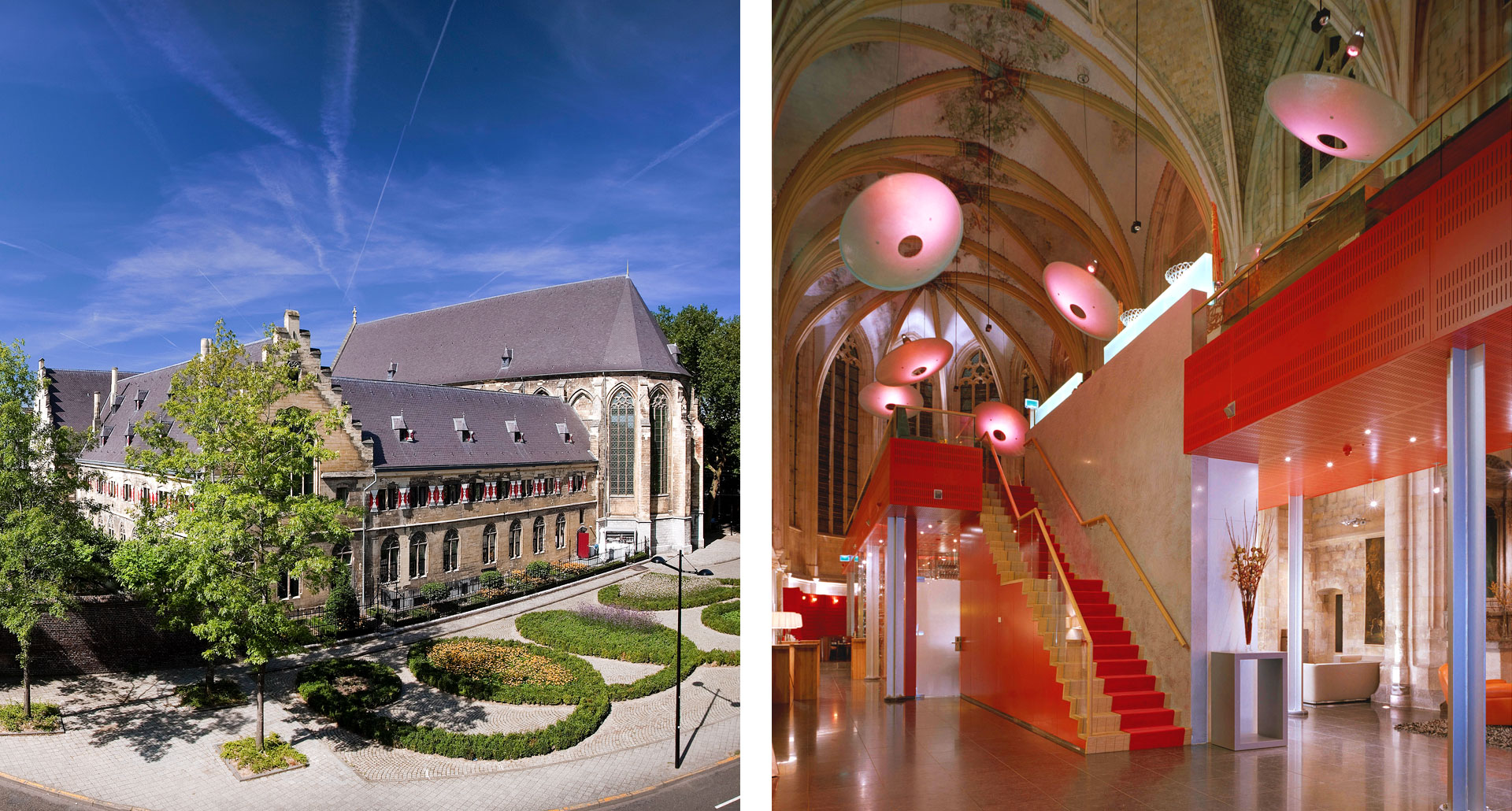 Perfect for embracing your eccentric side, this former 15th-century monastery is now a modern-day design-hotel masterpiece. This is not just loose talk; among the interior contributors are Le Corbusier, Philippe Starck, Marc Newson, and a healthy roster of contemporary Dutch geniuses. Here’s an expressive, multi-layered design experience, ideal for someone who’s made a career of continual sonic reinvention. 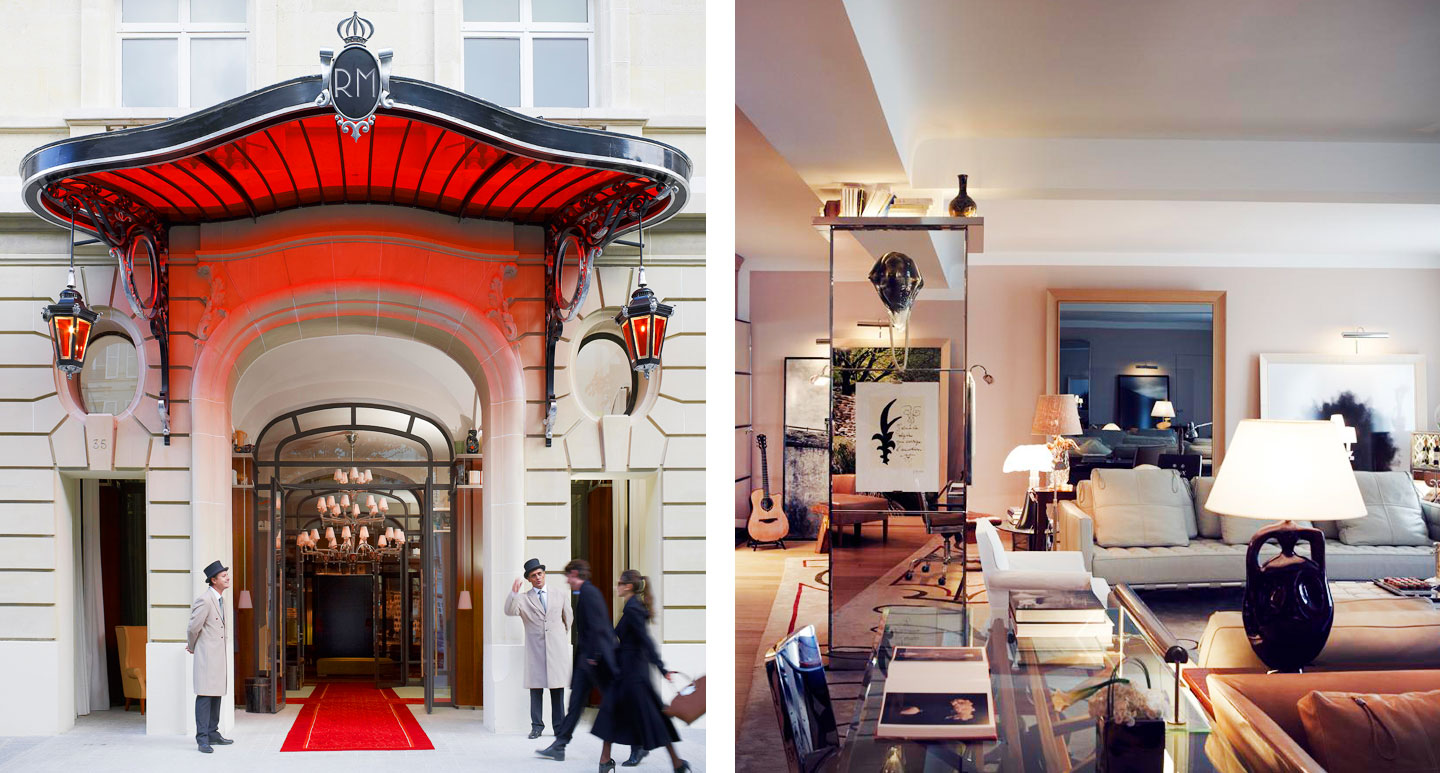 When it comes to the unabashedly excessive, Le Royal Monceau is where old and new money converge. The spirit of the European grand hotels of yore still courses through these crystal-bedecked hallways and staircases; contrast that with the totally contemporary visuals on offer at the hotel’s own Art District and gallery. And the dedicated junket room makes the press’s demands on the modern entertainer practically effortless. 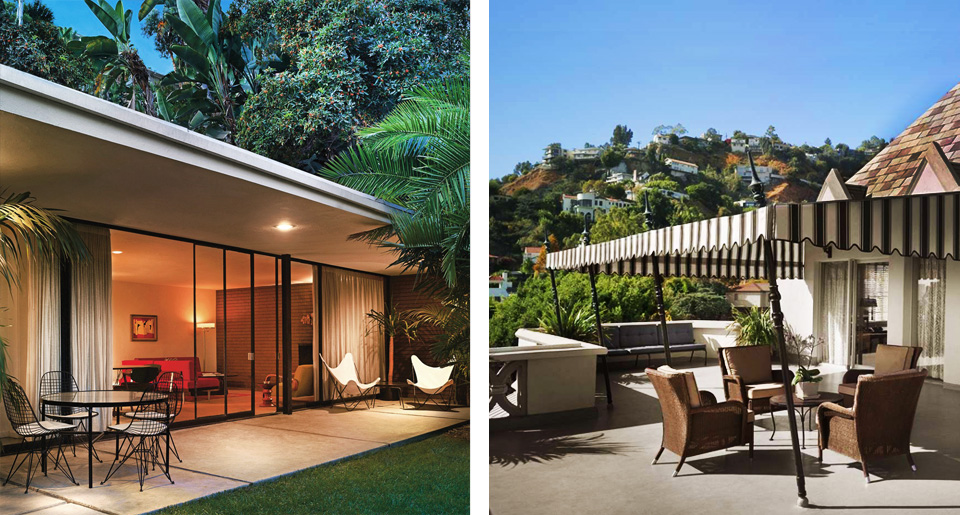 There’s no place quite like Chateau Marmont, for rock stars both literal and figurative; Jim Morrison, Robert De Niro, and Howard Hughes have all taken up residence here at one time or another, among many others. At the top of a celebrity hotelier’s wish list would be that their hotel could be a haven for stars who want a social life but don’t want to give up their privacy. If these walls could talk — then again, the whole point of the Chateau is that they don’t, and they never will. 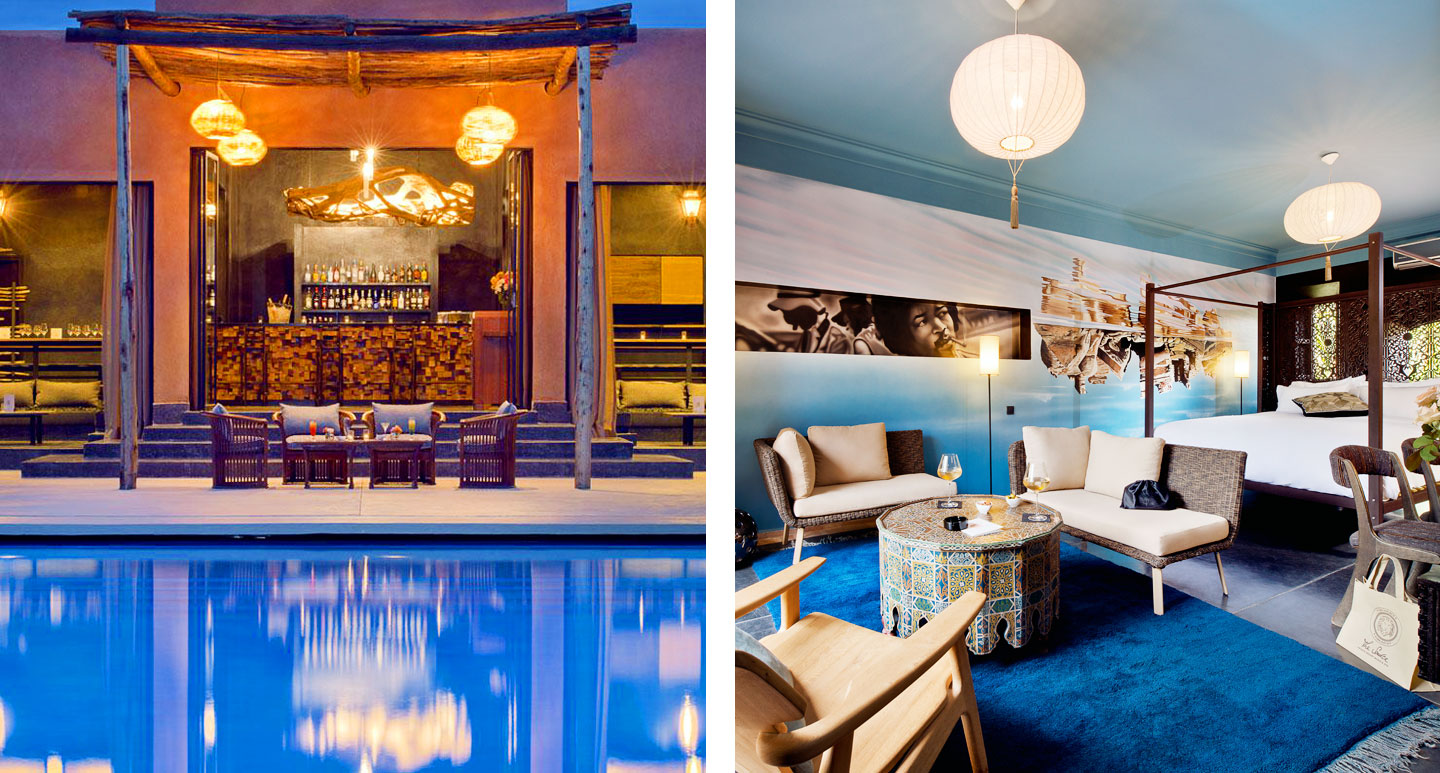 The fact that it’s got an in-house recording studio is only a small, if obvious, part of why we mention the Source. It’s also notable for the contrast of its rock-star décor against its palatial, Berber-inflected architectural backdrop. It’s got a performance space as well, although it’s a touch smaller than the venues you’ve lately become accustomed to…. 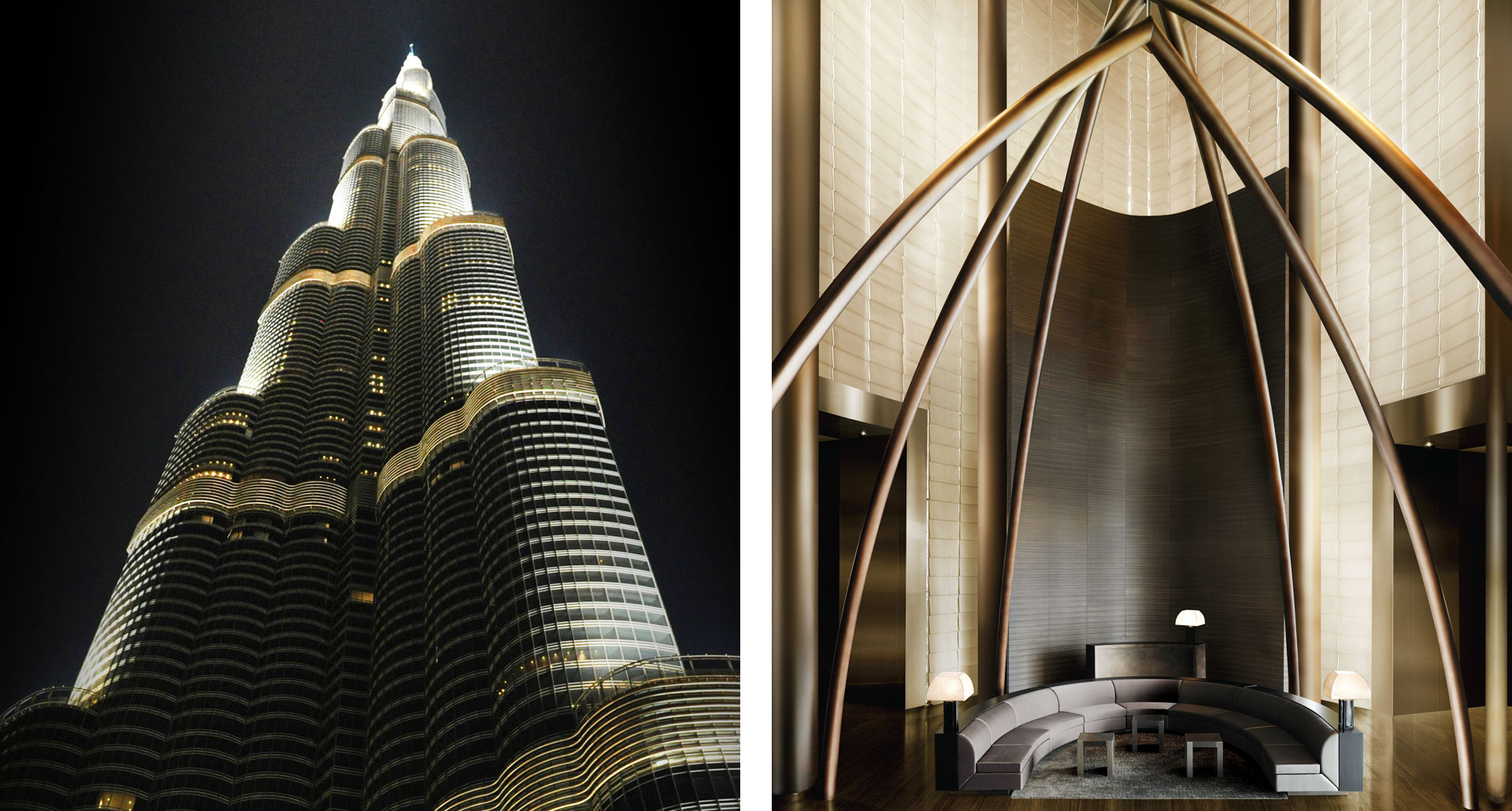 The world’s tallest building is, in a way, perfectly suited to an artist who’s no stranger to grandiosity — and if self-belief is what fuels your creation, then believe away. Giorgio Armani himself supervised this couture corner of the Burj Khalifa, and we expect his exacting Milanese taste has more than a little bit in common with a certain perfectionistic college dropout. With no fewer than nine eating and drinking establishments, the Armani offers plenty of opportunities to take in the international fashion set — and to show off a little bit yourself. 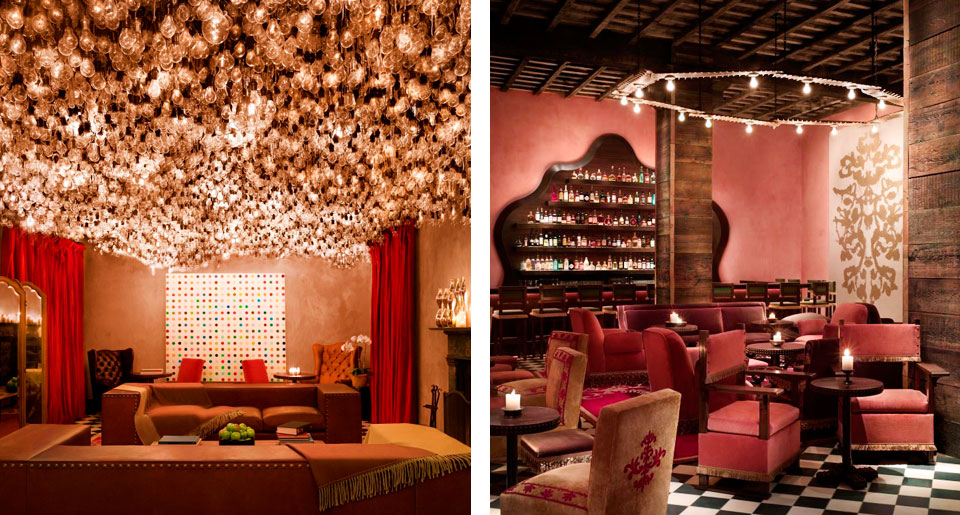 If you’re determined to surround yourself with nothing but the best for inspiration, it’s only fitting to stay in a hotel showcasing a museum-worthy collection of highbrow artworks. Julian Schnabel’s second career as a hotel designer has turned out well — maybe one to emulate? — and there’s nothing in Manhattan quite like the private Gramercy Park itself. It can be a lonely life at the top — might as well make it beautiful. 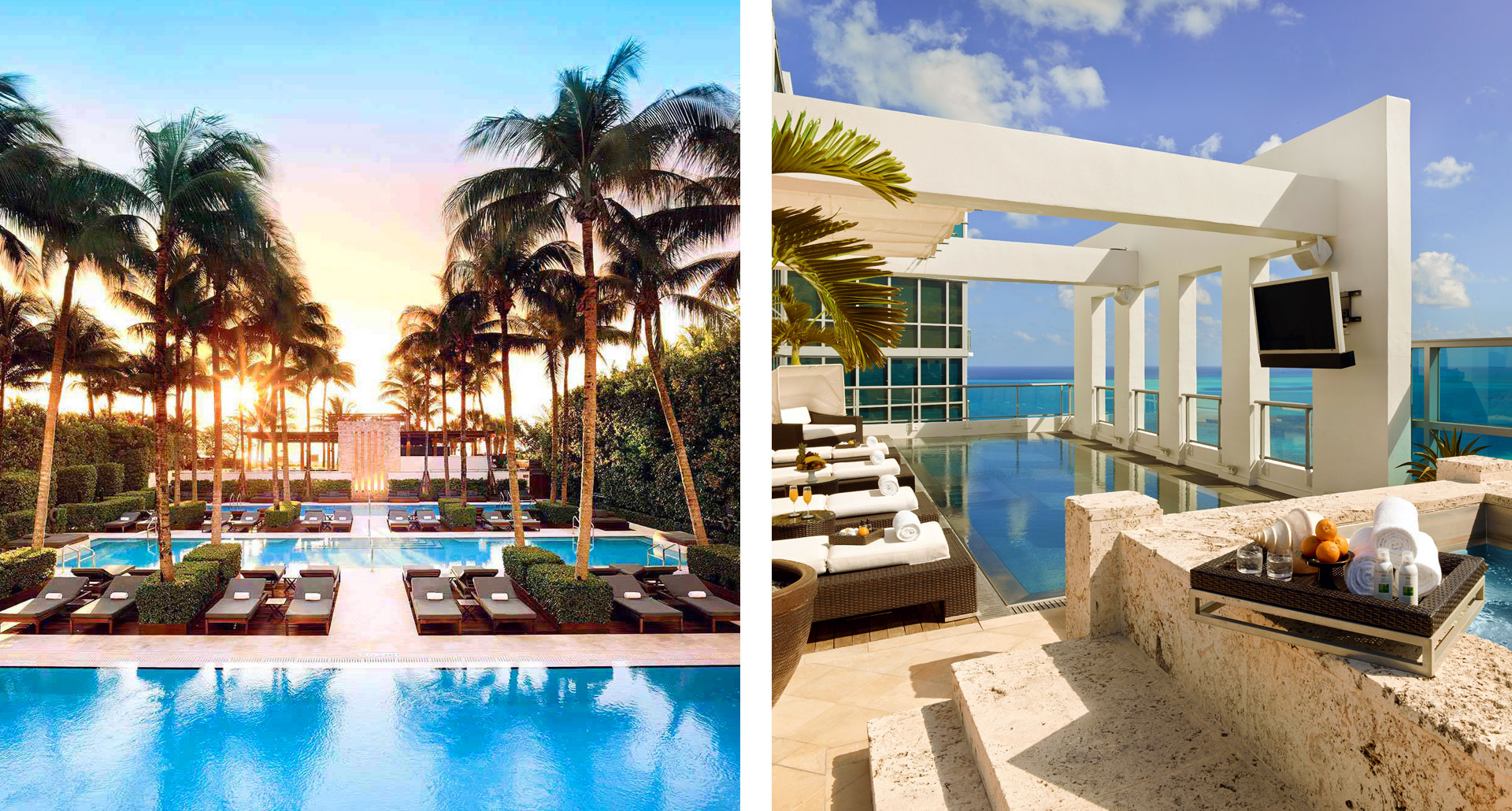 Naturally you’ll set aside some time to party in Miami. The Miami Beach scene embraces the stratospheric ambition and full-bore decadence that defines the Kanye West formula. Just take this glittering, glass-tastic 40-story tower of suites, nearly all of them staggeringly large and blessed with incredible ocean views. An ideal setting for outsize antics, and a place that never shies away from the limelight. 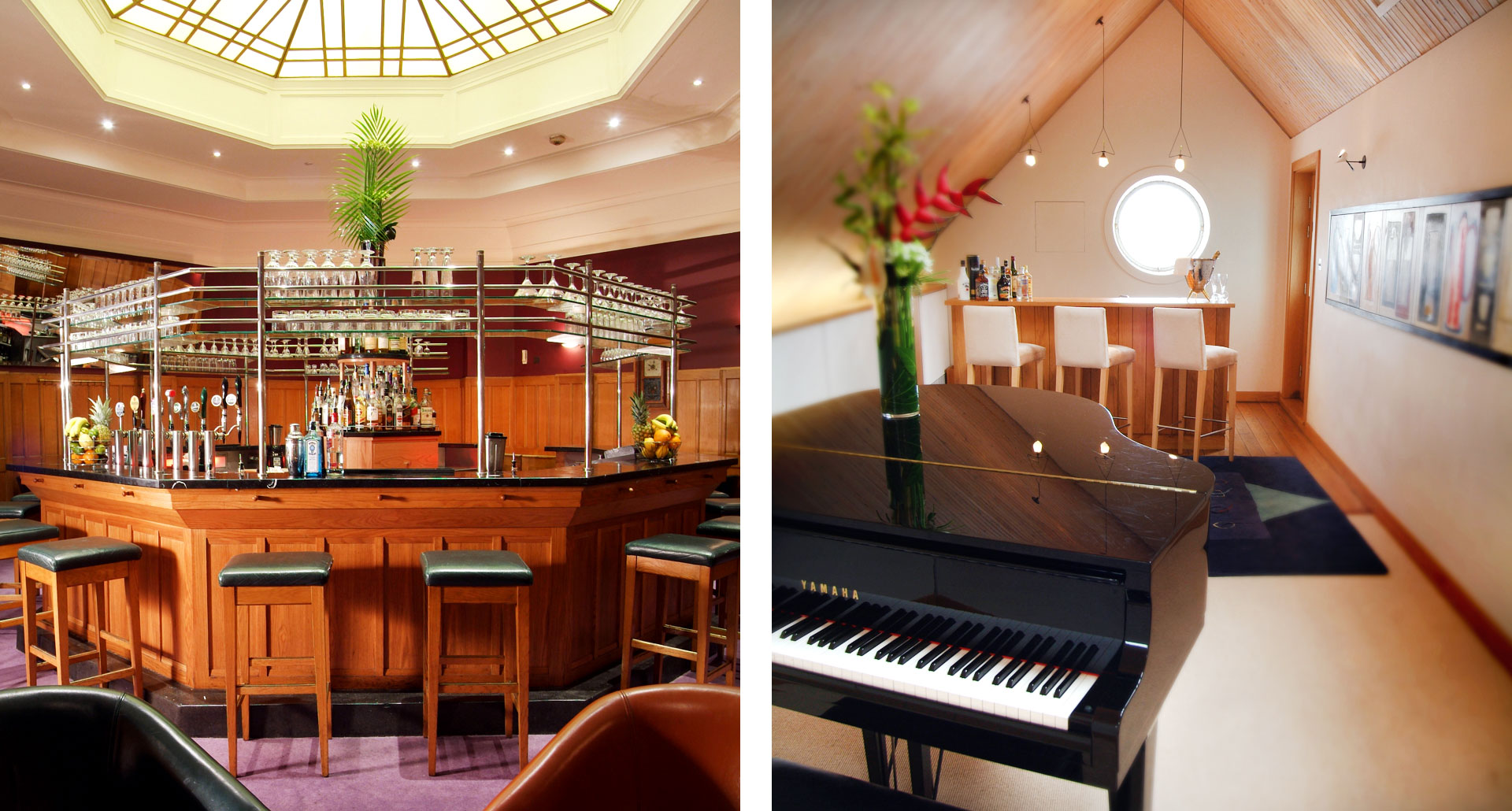 Or take the direct route and consult with the two bona fide rockstar proprietors behind the Clarence, U2’s Bono and the Edge. Thanks to them, anyone who’s anyone in the arts and entertainment world has stayed here on their way through Dublin. Champagne and thrilling views of the Liffey and surrounding cityscape: not a bad setting for a meeting of the minds. 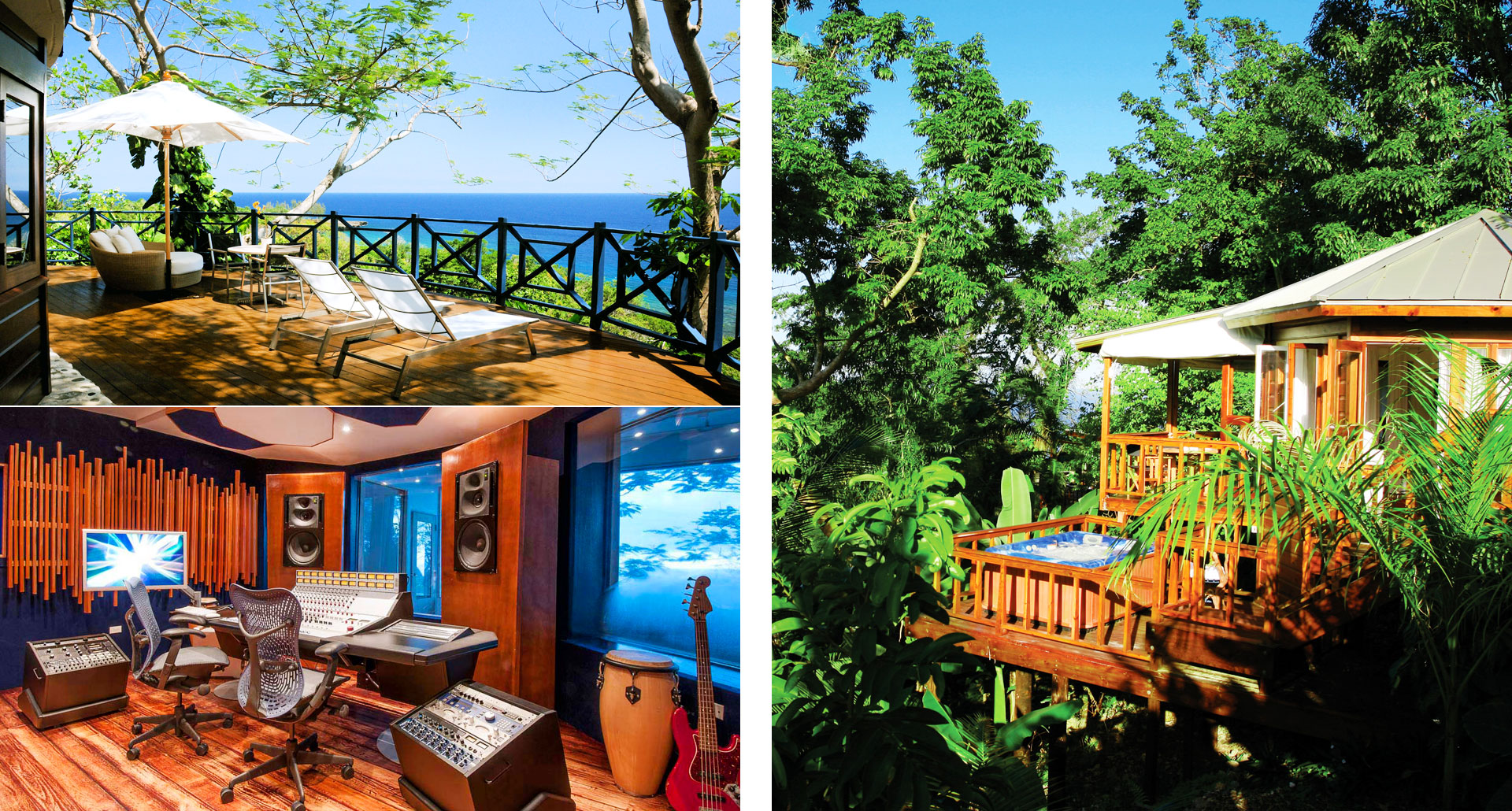 You couldn’t ask for a more direct musical connection: everyone from Björk to Gorillaz cut wax here when it was only a recording studio. Now, thanks to hoteliers and music-industry veterans Jon Baker and Steve Beaver, it’s an exceedingly private handful of well-appointed suites within shouting distance of some of the country’s finest beaches and Port Antonio nightlife. Compose, carouse, and commit to tape, and partake in Jamaica’s musical legacy, all in the same spot. 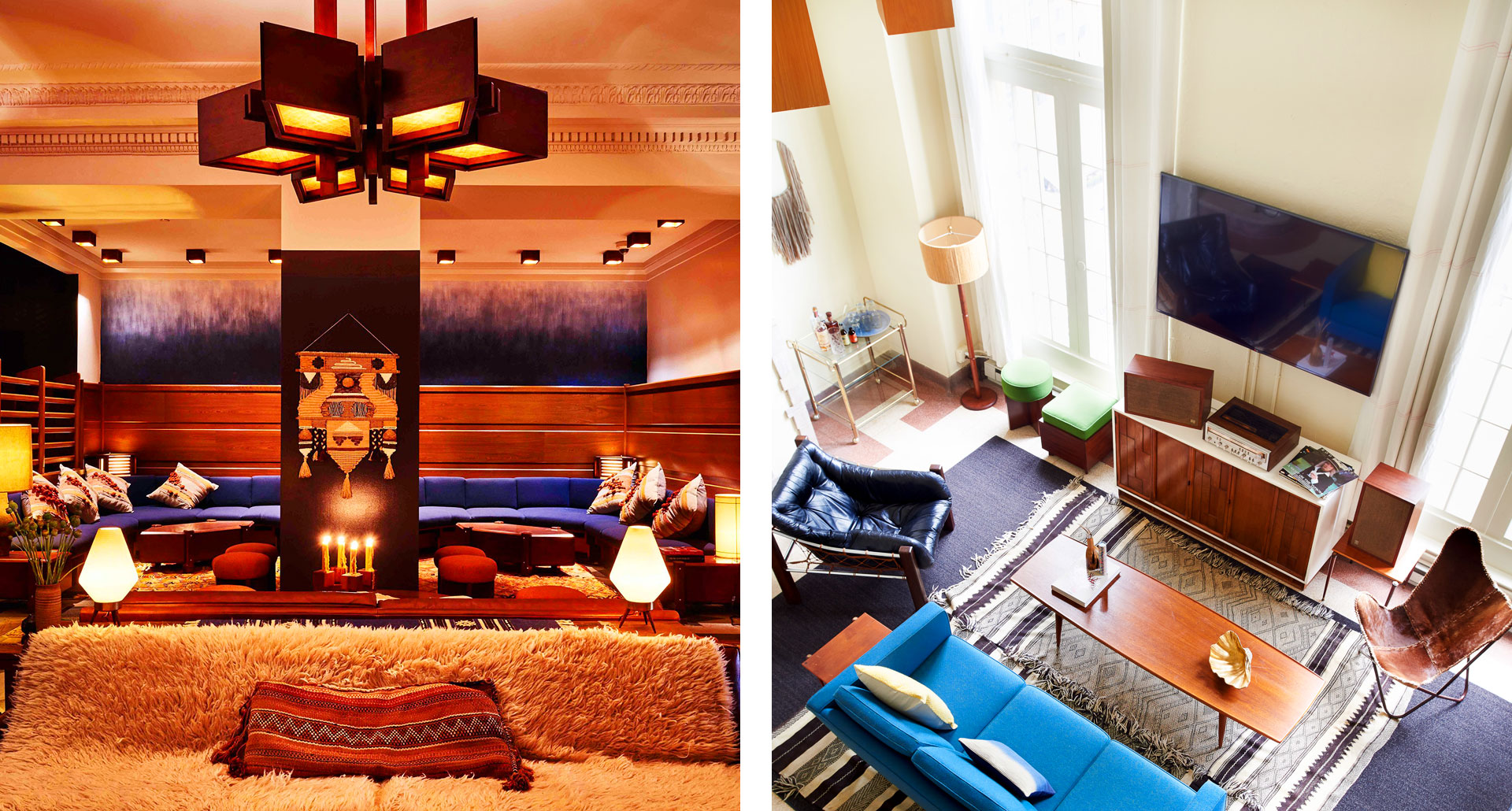 Your hometown had to show up somewhere on the list, right? Roman and Williams crammed a ton of design savvy into a series of cozy, fluid spaces, spicing up the surfaces with totemic and fabric-forward motifs. It’s an accessible kind of cool, more ready-to-stay than haute hospitality, which is perfect — we know that in the end, whatever you’re planning will be designed for mass appeal. 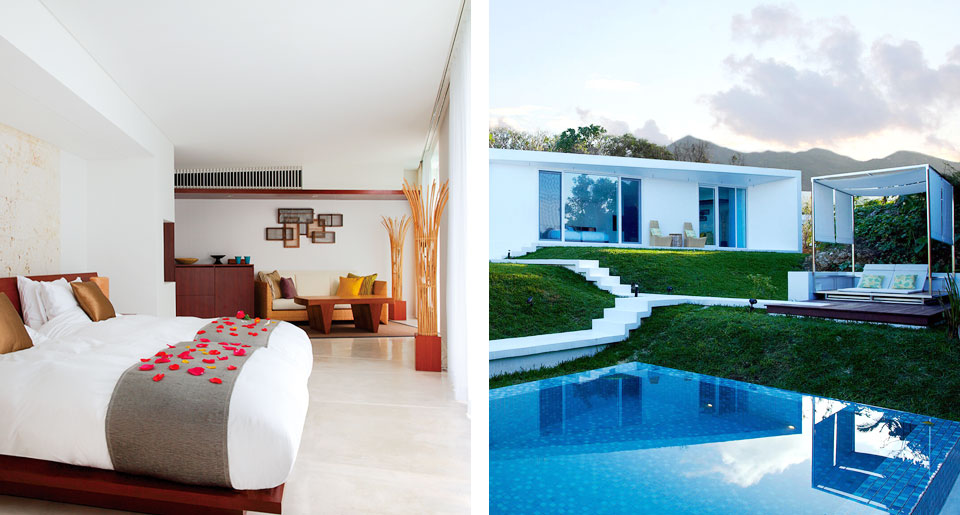 What better way to wind down a world tour than on a serene Japanese island? These hyper-minimalist villas are temples to the simple, mindful life, a life inextricably entwined with the landscapes and seascapes, especially when the phrase “private beach” starts getting thrown around. Don’t miss out on the Blue Cave, a mesmerizing, coral-fringed grotto that might make for the perfect songwriter’s hideaway.