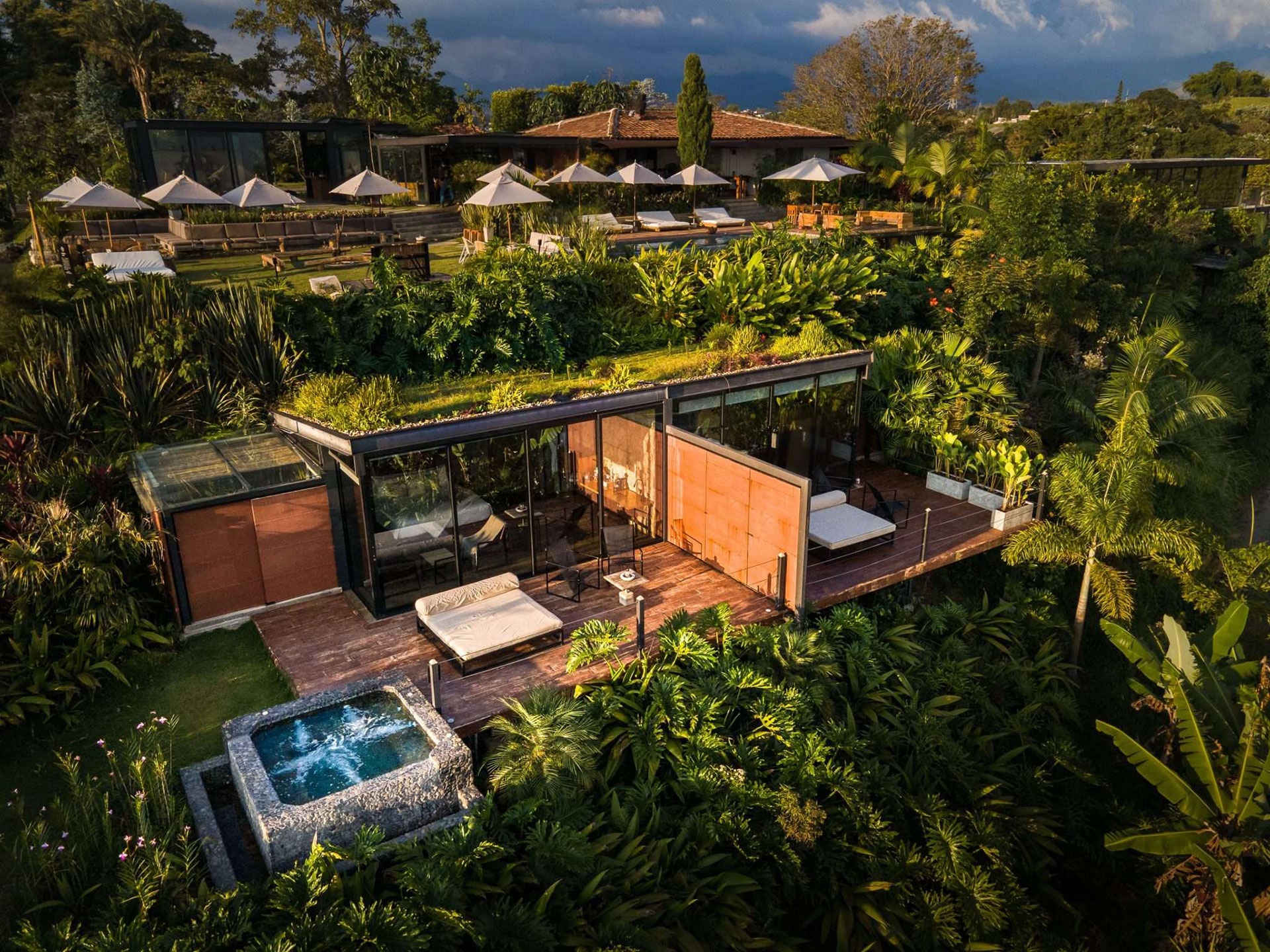 There are more than 100 species of birds in the forest at Bio Habitat Hotel. That number doesn’t include the guests, of course, despite their dramatic perches high above the Colombian countryside.

If you’ve ever seen the show Arrested Development, you’ll likely remember that the Bluth’s had a banana stand in the shape of a big yellow banana. That’s an example of novelty architecture; a style marked by fantastical buildings designed to mimic products or shapes, like hot dogs and hats. At first glance, the postmodern steel and glass structures of the Bio Habitat Hotel look like what they are, luxury accommodations that overlook the vast forests and fields of Colombia. But maybe they could also be a form of novelty architecture: birdhouses, built to help guests mimic the avian experience of perching high up in the trees or along a mountainside.

Bio Habitat sits in a portion of this country not often visited by tourists; a region known for vibrant small towns and enchanting cloud forests where the palm trees tower two hundred feet in the air. The team behind the hotel doesn’t lament the lack of attention. They relish the opportunity. In fact, speak to them and they’ll profess their belief that this this western region of the country, often called the Coffee Axis, could become South America’s answer to Bali. In other words, a place that lures tourists with jungle and luxury.

The great advantage of being the next Bali is that you’re not Bali yet. The rules have yet to be written. The crowds have yet to really come, and the development has yet to really go over the top. There’s still time to define tourism from the ground up. In the Bio Habitat Hotel, they’ve laid the blueprint for an eco-first mindset that doesn’t just provide proximity to nature — it protects and enhances it.

And it starts with those birdhouses.

In the forest that defines this hotel, the Selvaries, Aviaries, and Nest rooms take the experience to its pinnacle, providing all the outdoor immersion of a tent combined with the luxury of any of the world’s sleekest boutique hotels. Over a hundred and fifty unique avian species provide a soundtrack. The Aviaries in particular sport glass sides held up on stilts, with a 360-degree view of the forest. The rest have a combination of balconies, outdoor hot tubs, private pools, and hammocks that suspend above ground from the terrace.

There are some two dozen rooms at Bio Habitat Hotel. Not all of them sit in the trees. The public spaces of the hotel — the restaurant and pool, the bonfire area, and a lounge room — reside on a mountaintop plateau. Views stretch out over coffee and plantain crops to the Andes. It’s here you find the rest of the rooms, primarily suites — but they’re no less entwined with the landscape than those in the forest. Roofs covered in foliage camouflage snugly into the earth. The dim lighting recommends you mosey outside after sundown to stargaze barefoot from the grass. It’s modern and experimental, but the architecture isn’t meant to impress on its own merits — it’s there to underscore the beauty of its setting.

Although they only opened Bio Habitat in 2018, you could say this place really began a decade past, when two childhood friends began a design and construction company. Julian Escobar and Jorge Gonzales set out to build private homes that followed the principles of passive architecture, with a bent towards environmental recovery. They discovered this site while working on another project, and felt such a setting had to be seen by a wider audience. 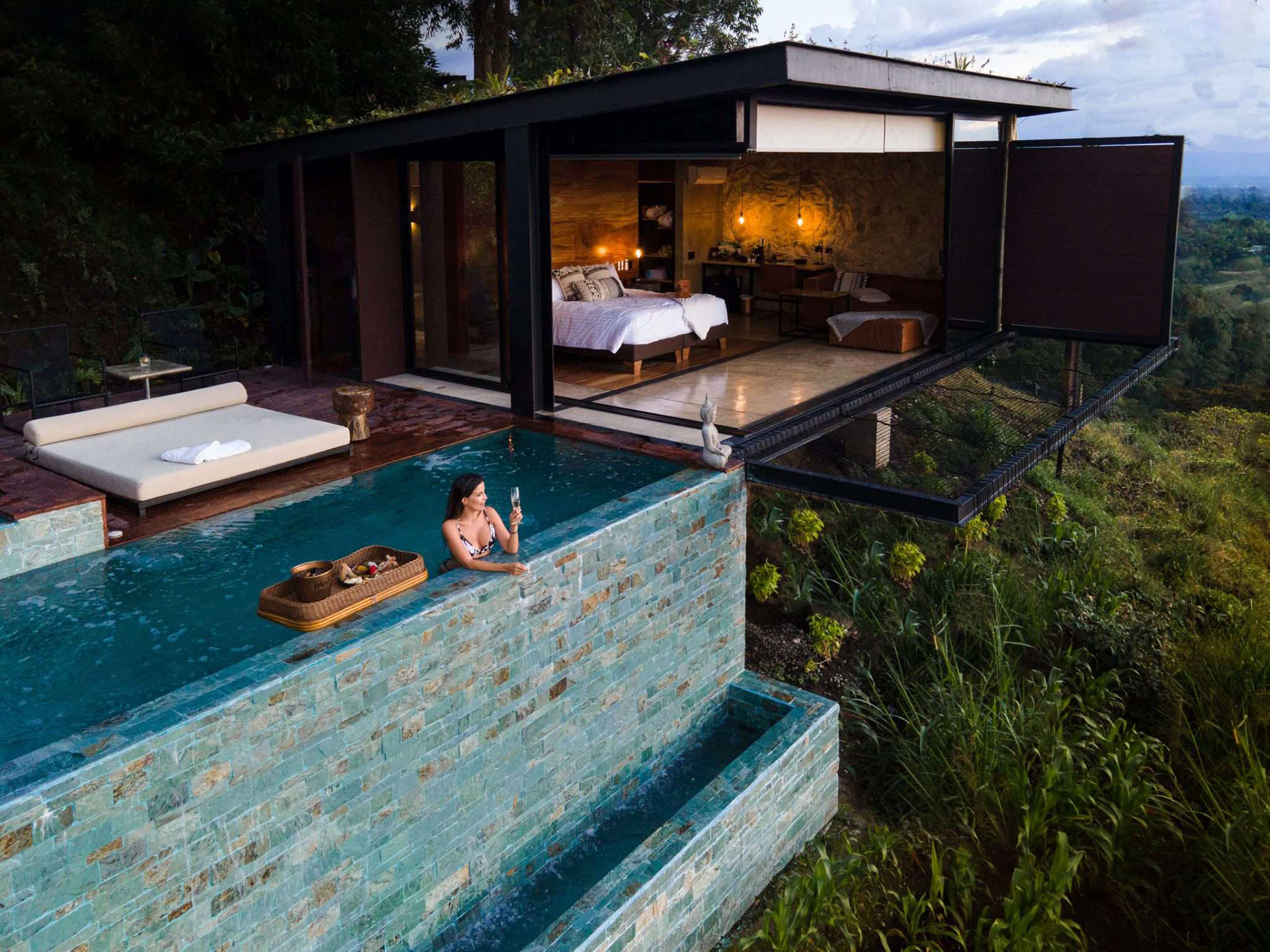 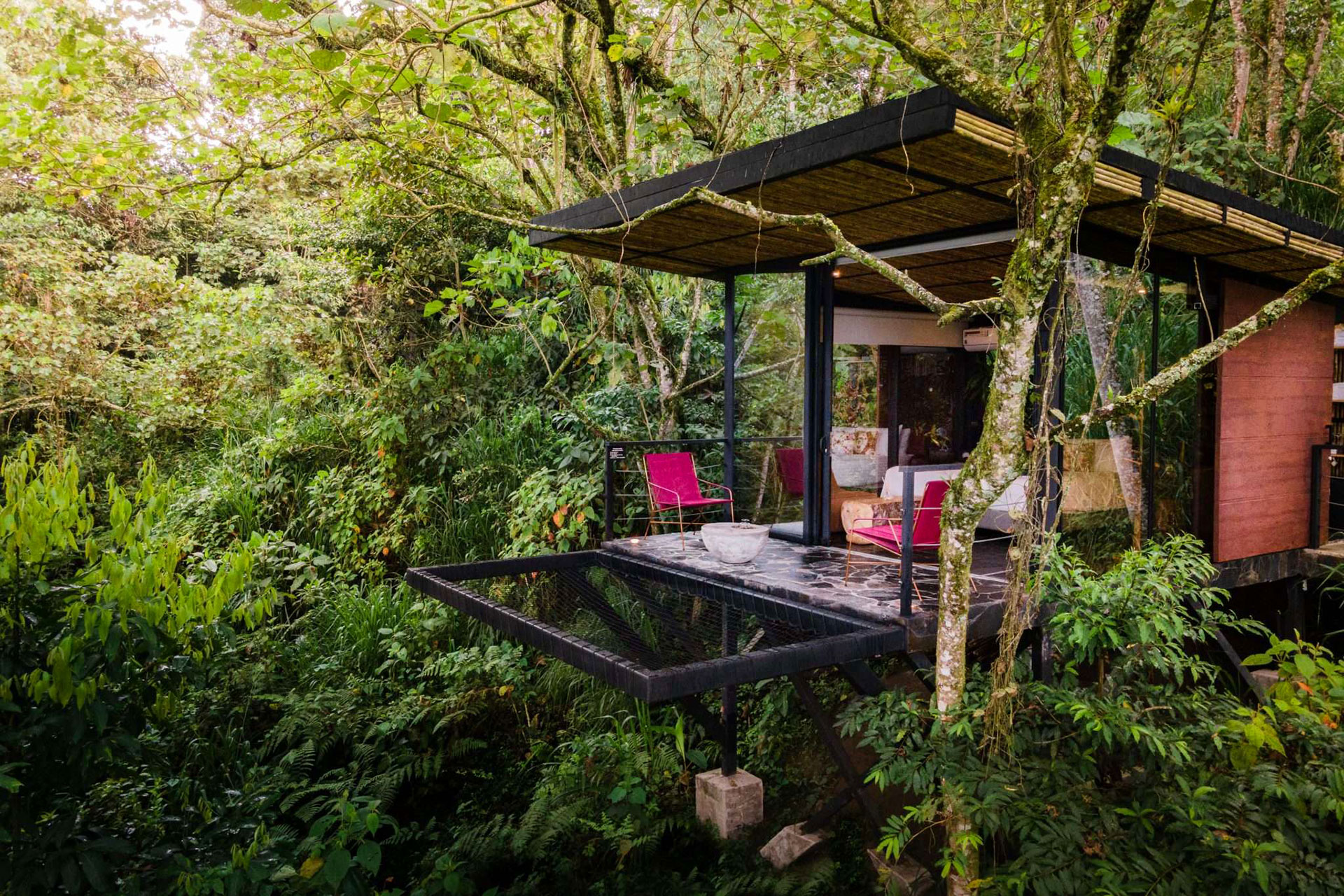 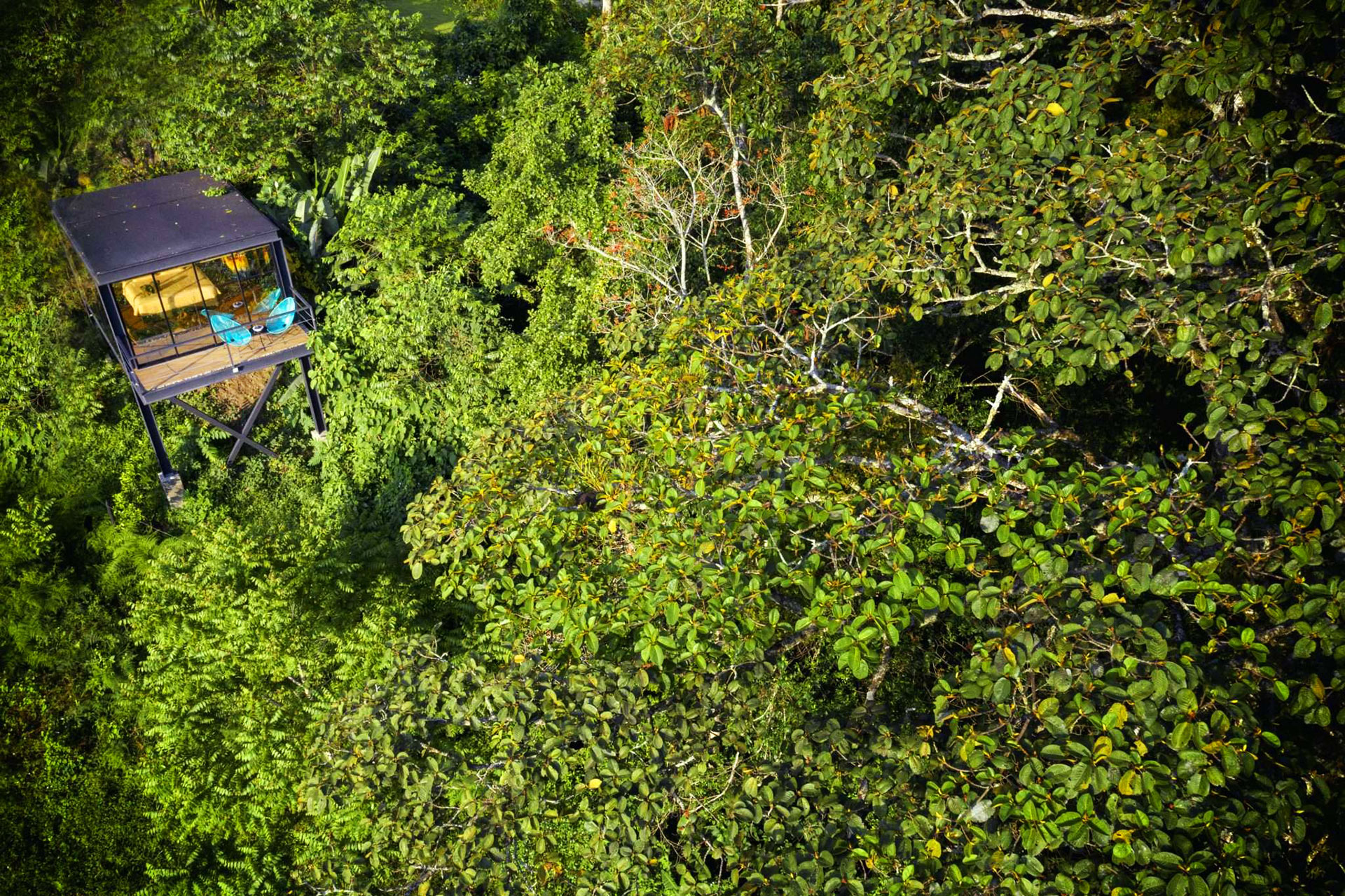 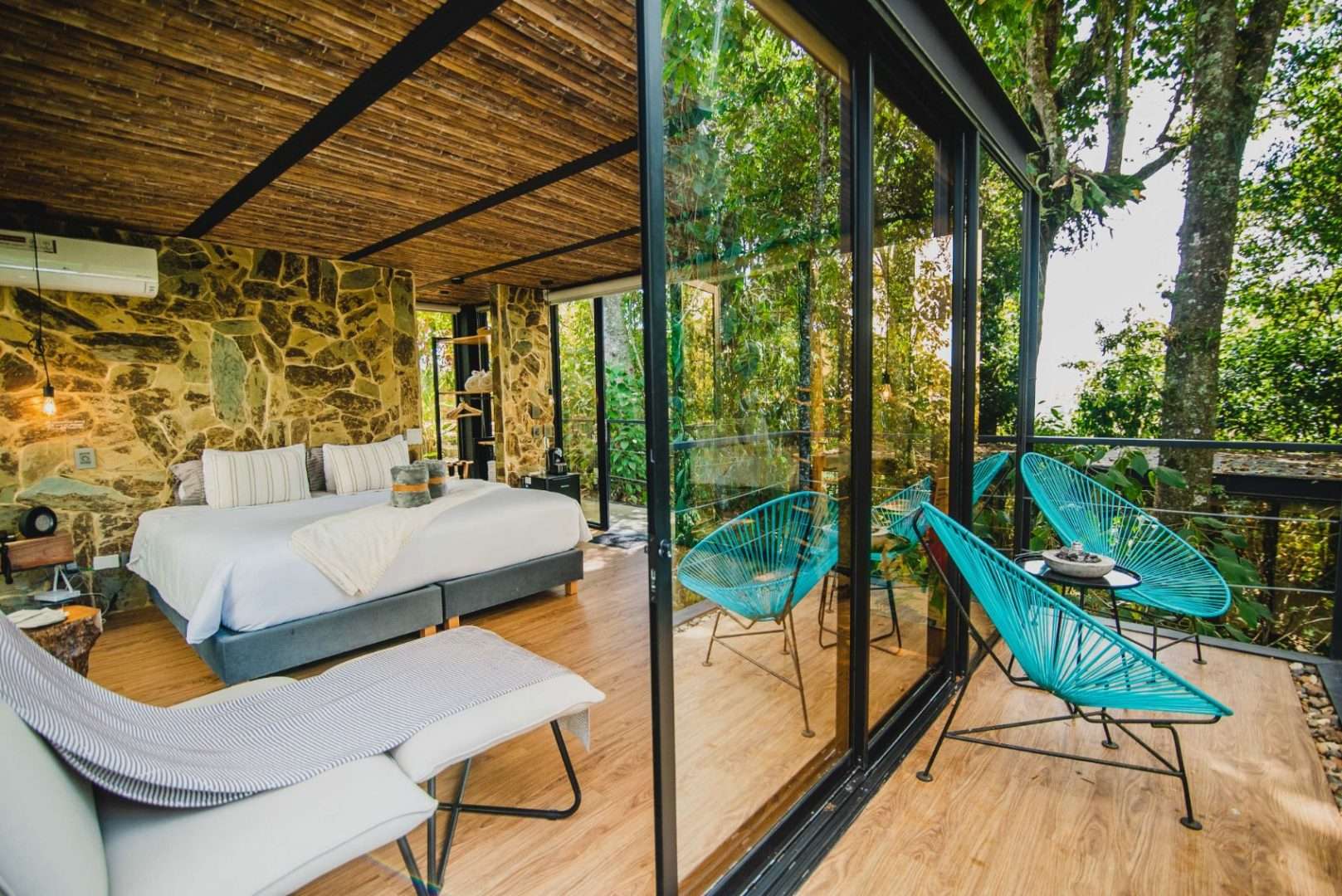 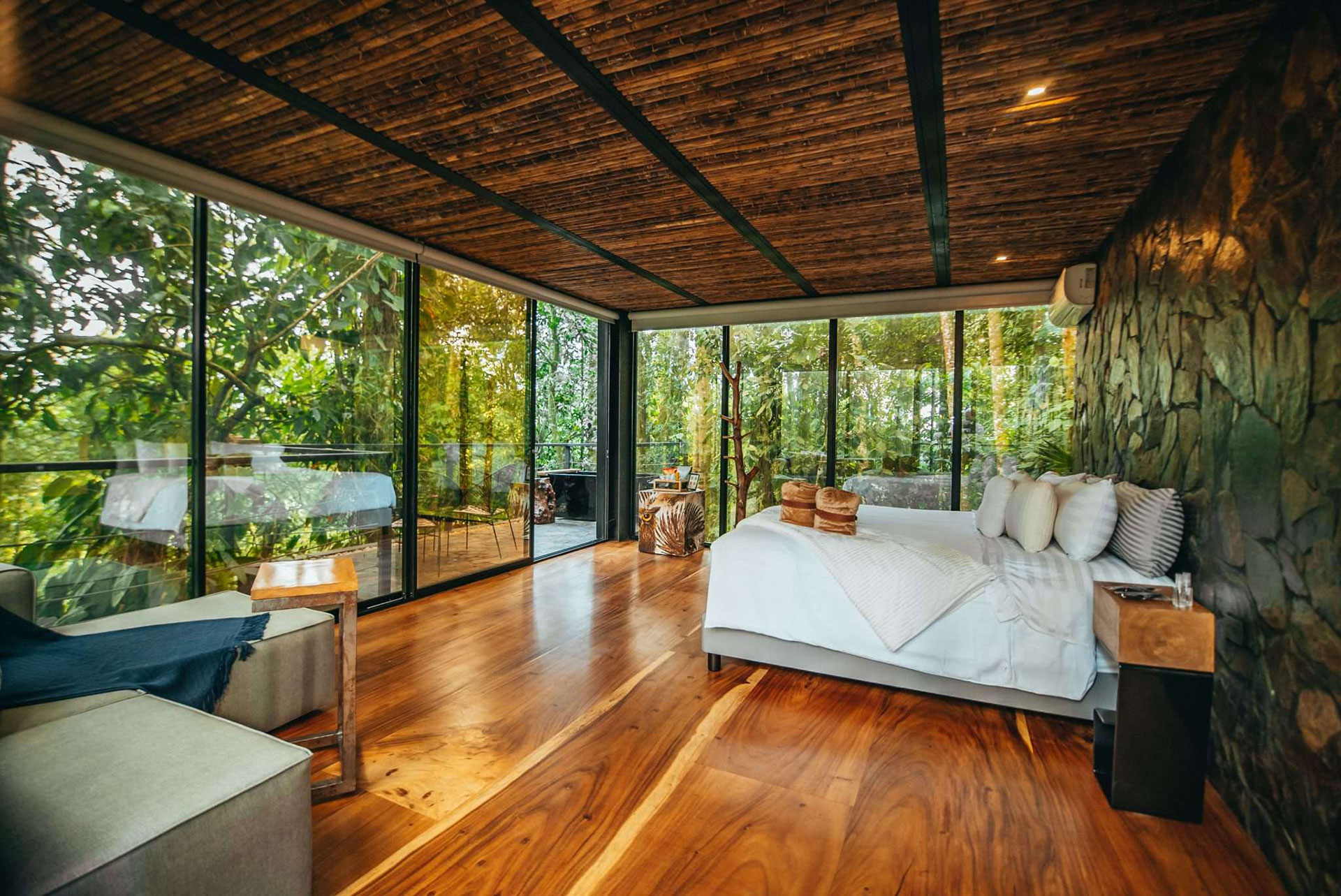 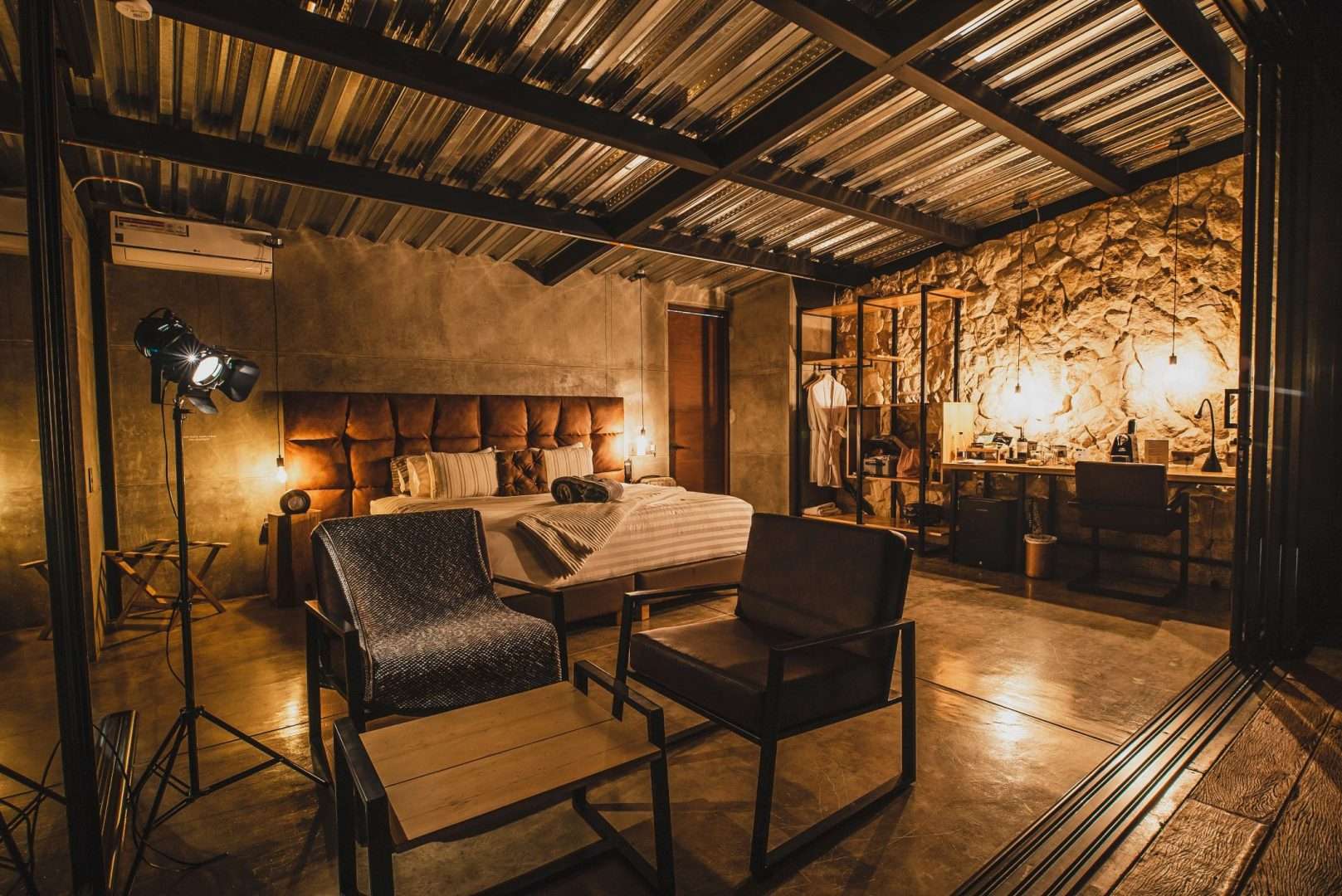 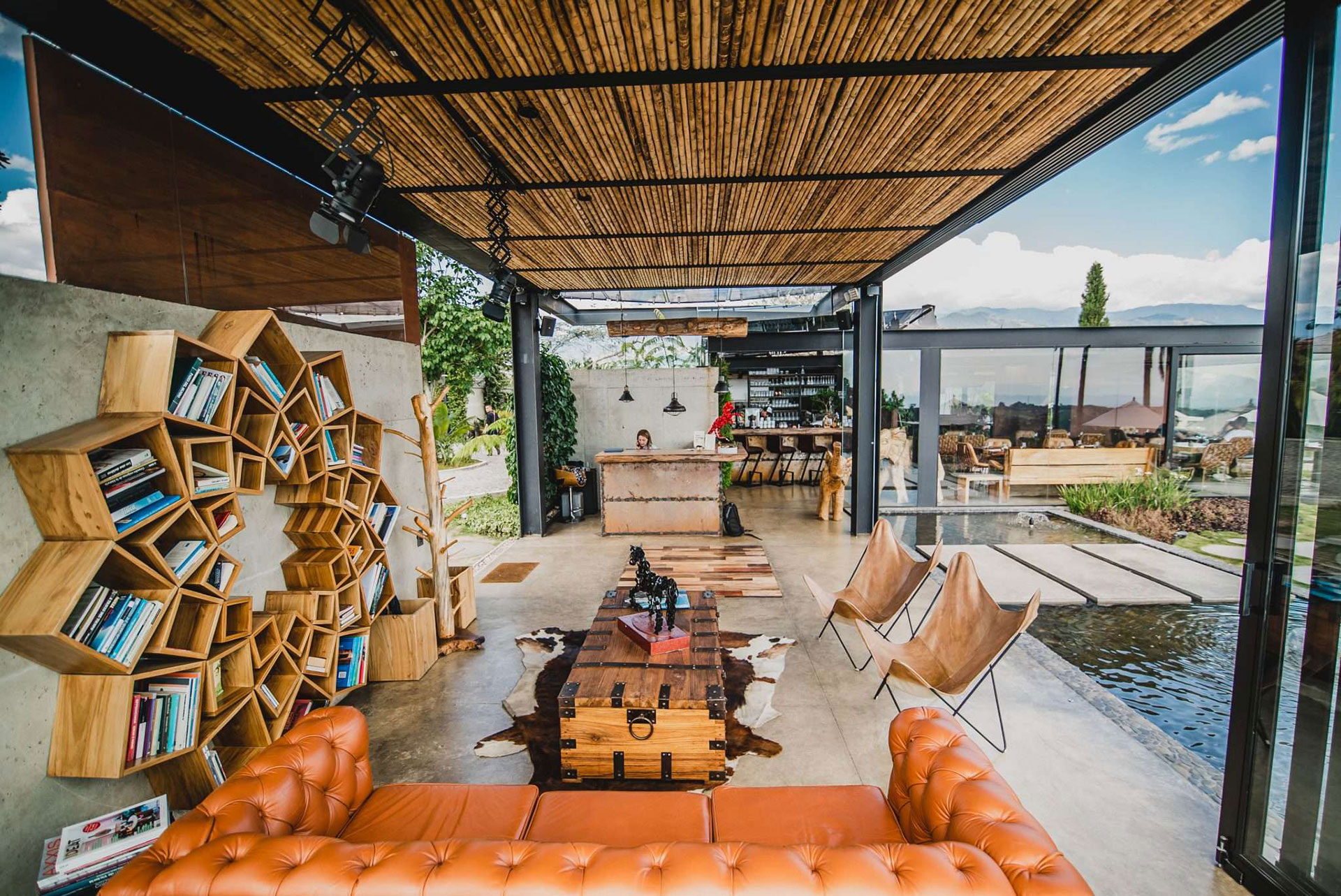 “We want tourism but we want it to be conscious tourism that appreciates our country and natural environment,” says Gonzales. “Hotels like this make tourism sustainable because it attracts people who want to be aware of their surroundings. The more hotels we have like this, the more positive impact on the earth.”

Awareness and attitude are key to the hotel’s mission, which offers guided walks on their own grounds to learn about their regenerative efforts, or to simply observe the dozens of species of birds. Other natural excursions, like a trip to the incredible UNESCO-recognized Cocora Valley, are on offer. But it’s more than building awareness and appreciation. Sustainability is the foundation of this hotel. Cool-light glass, high ceilings, and the thin rock used in construction make air conditioning less necessary. The forest rooms are elevated on metal structures to allow the forest ecosystem to live on undisturbed underneath. The goal for their solar panel system, which currently supplies forty percent of the hotel’s energy needs, is to get to one hundred. Water residue is treated in a natural pond system and then used to irrigate crops, and compost is used in tree planting programs to help regrow forest around the hotel.

And in the end, with all the sustainability and creativity to recommend it, this is a luxury hotel. You can spend your day with yoga and meditation classes, or at the soon-to-open Bô Wellness Center. Little spots to sit and wonder are found all along the forest paths. And we haven’t even acknowledged the onsite Basto restaurant, where slow food is made from local ingredients by a chef, Maria Clara, who more than understands what constitutes the mission of this hotel — to feel a real link to the place, and an ambassador for its location.

“You can see the sun, the rain, every natural force in its purest form here,” she says. “The hotel makes it a Colombian experience. The design lets you be here.” ▪ 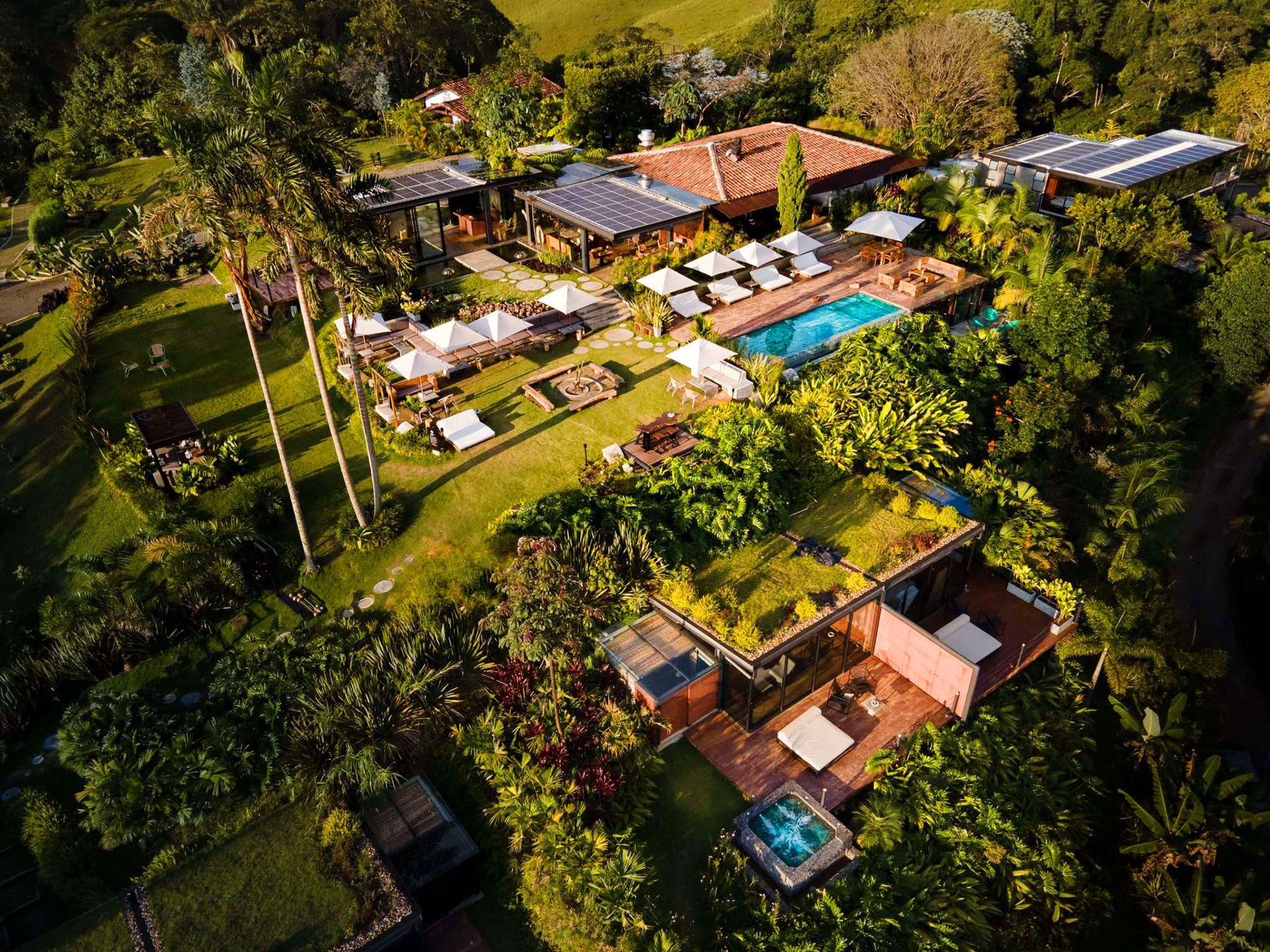