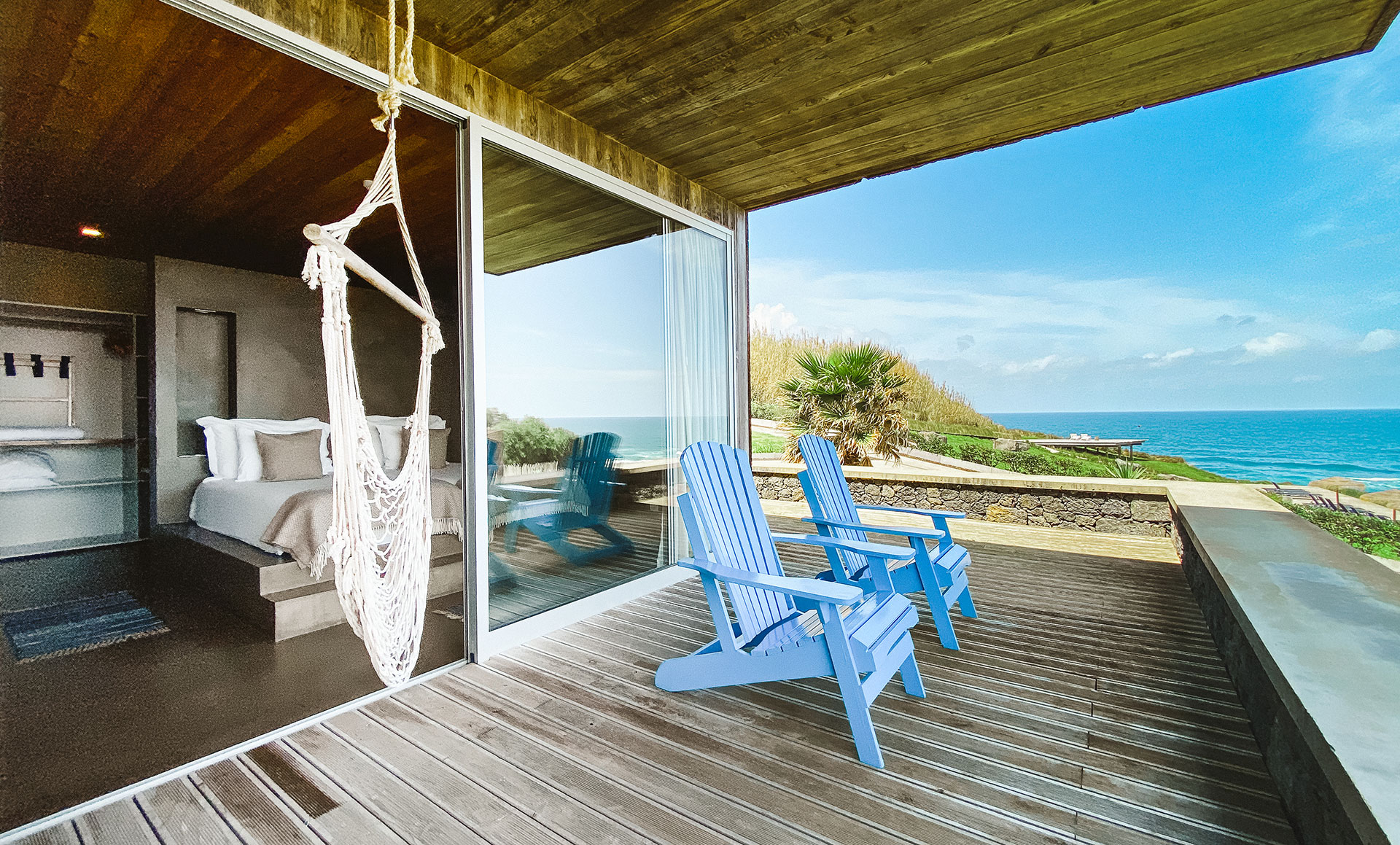 Residents of the Azores are fiercely protective of their islands’ natural gifts. They’ve long been wary of tourism, but hotels like Santa Barbara Eco-Beach Resort show they’re slowly starting to come around — on their own terms.

What does the perfect travel destination look like? That varies depending on the type of trip you’re looking to take. One thing we can all probably agree on is that a destination that hasn’t blown up is better than one bursting at the seams. Better still is a destination that’s as appealing as any other on earth, yet is unwilling to let mass tourism put at risk the natural gifts that make it special.

The Azores are such a place. Nine wild, volcanic parcels of paradise where dolphins surface just off the coast and hikers dally over thermal pools and crater lakes. Locals like to say that these wildflower-strewn islands are what’s left of Atlantis. To others, this is the “Hawaii of the Atlantic.” So why aren’t the Azores a bigger destination? Thanks to hotels like Santa Bárbara Eco-Beach Resort, they might be on their way.

By the laws of natural beauty, ocean waves, and convenient flight paths, this place should be as popular as Hawaii. But the Azores, about two-thirds of the way from America to Europe, don’t have nearly the same history of modern tourism. Explanations why have cited underdeveloped infrastructure or temperamental weather, or even the fact that most of their beaches — whether due to rocks or waves — aren’t suitable for lazy days in the surf. Whatever the reason, the people of the Azores have never been overeager to spoil what’s unspoiled.

These days, tourists are finally starting to arrive in numbers that make sense — and the finest boutique hotels are showing the responsible way to host them. With better direct flights and an explosion of Instagram influencers, the last half-decade has seen this archipelago at last fulfilling its trendy destiny. In businessman and passionate surfer João Reis they have a vanguard for responsible luxury development. Reis’s Santa Bárbara Eco-Beach Resort and his smaller property, the White Exclusive Villas, prove that tourism and sustainability are compatible here. 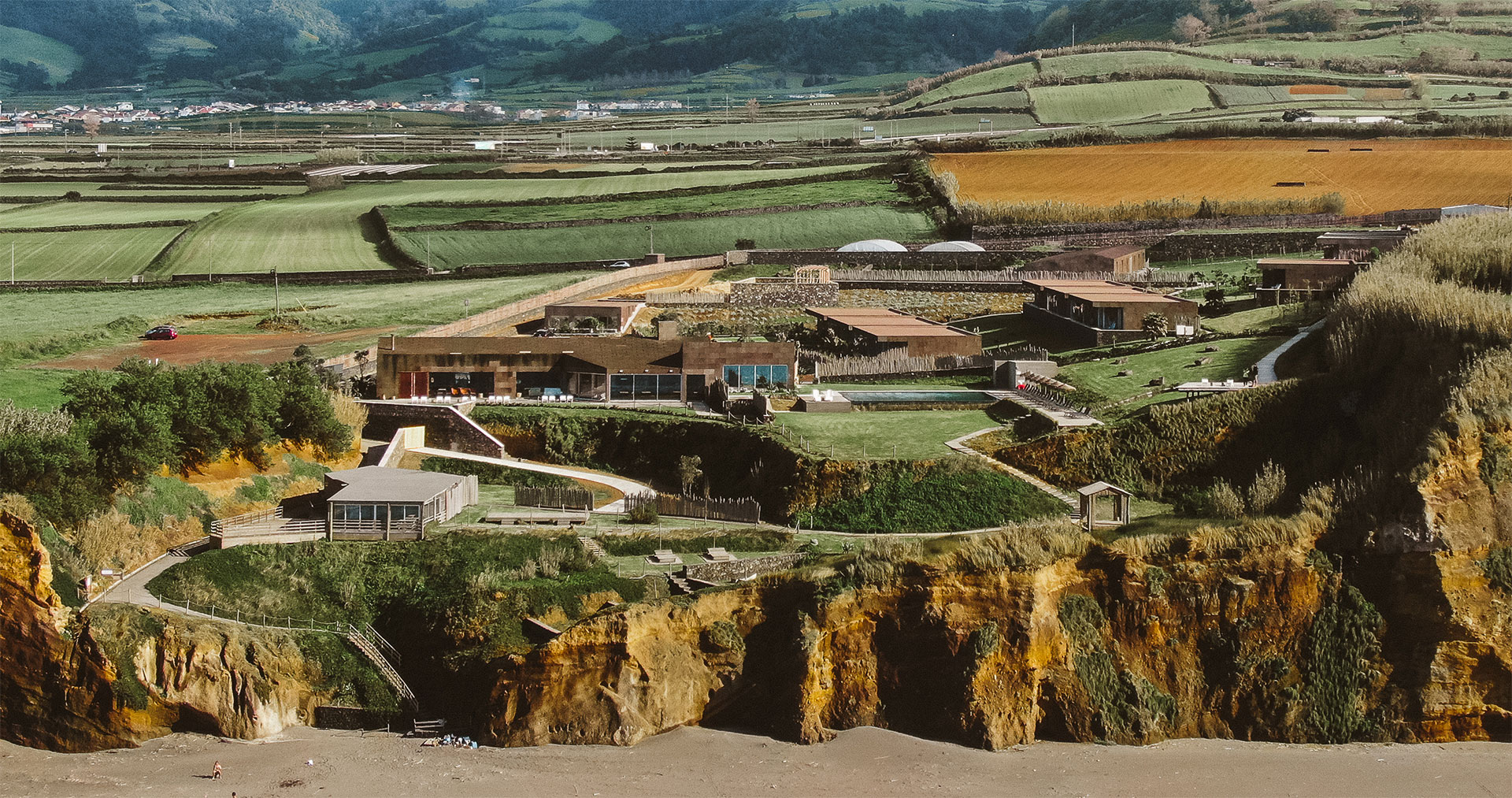 “The Azores are booming, definitely,” says Francisco Sant’Anna, a director at Reis’s Singular Properties. “But at the same time, it will never be a massive tourism destination because the people here simply don’t want that. They don’t want to spoil their lands.” The Azores are the first archipelago in the world certified by EarthCheck, a leading scientific benchmarking certification and advisory group for travel and tourism.

It’s a fact that Sant’Anna reiterates with pride, and one that’s underscored in every detail at Santa Bárbara Eco-Beach Resort. The hotel began with a pure green pasture, and from scratch Reis and team built a place that blends into the landscape. The light steel frames of the low-lying modernist villas are covered and filled with natural materials, from famous Portuguese cork to the island’s local cryptomeria. Around the property, rainwater is collected from rooftops, stored in a basin at the edge of the property for use in irrigation. The farm, meanwhile, along with two greenhouses, supplies the restaurant with its own vegetables, fruits, and herbs. And in the garden shared by select villas, a hundred indigenous trees have been planted in soil beds surrounded by volcanic rock.

“It seems easy to create a sustainable project in a land like this, in an island like this,” says Sant’Anna. “But actually there are only a few — and this was the first and the most incredible one. Everything is very carefully thought out and developed to respect the land.” 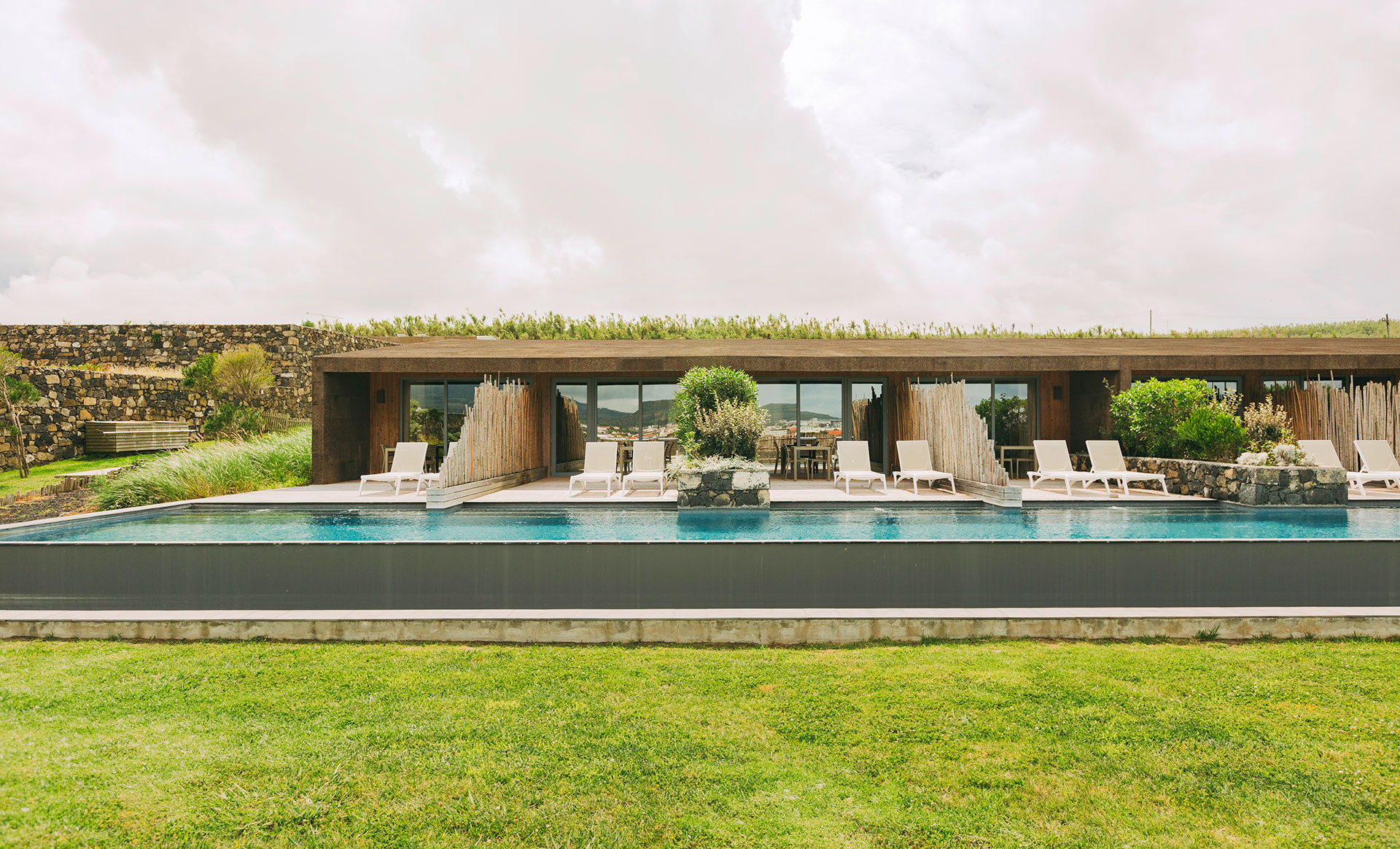 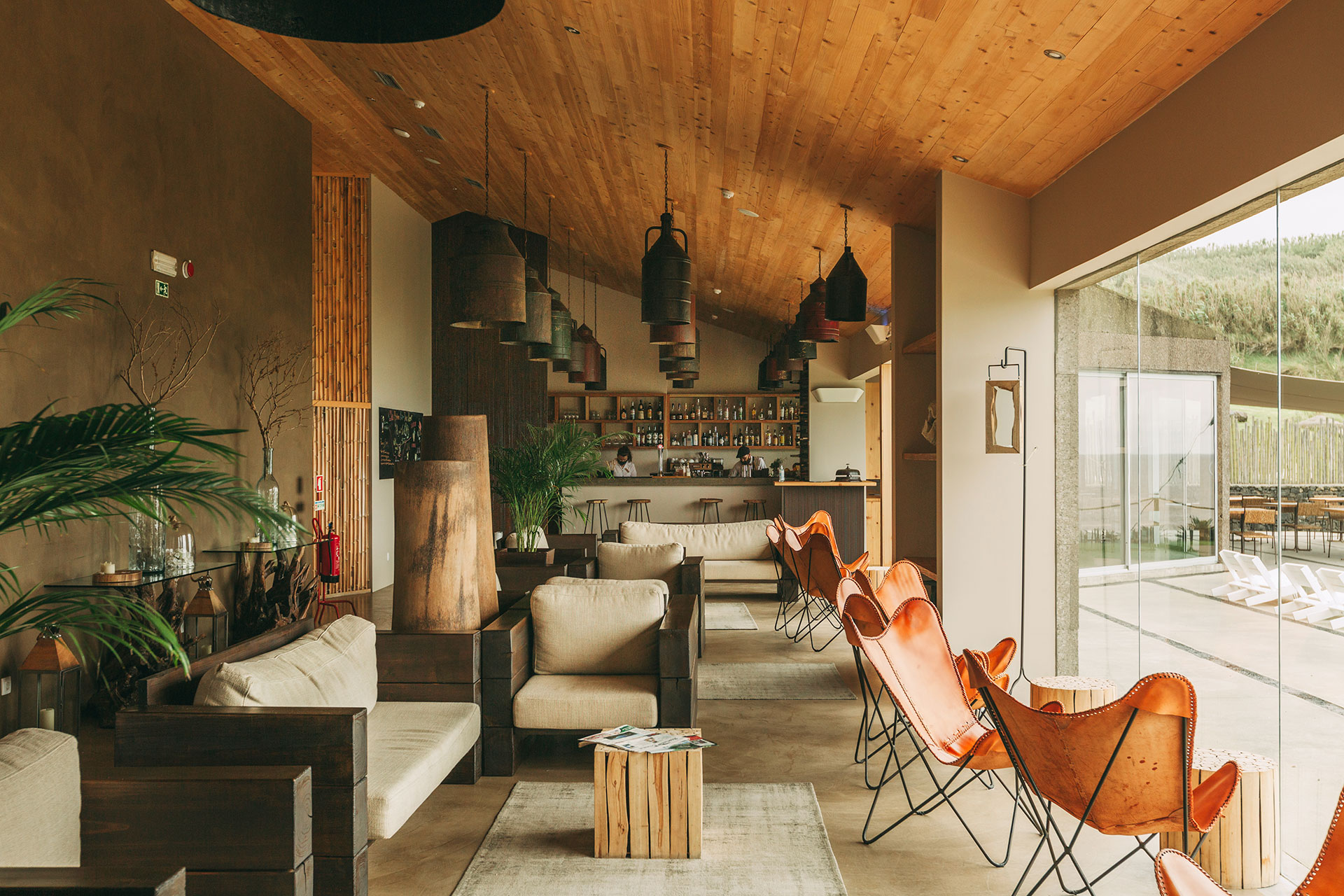 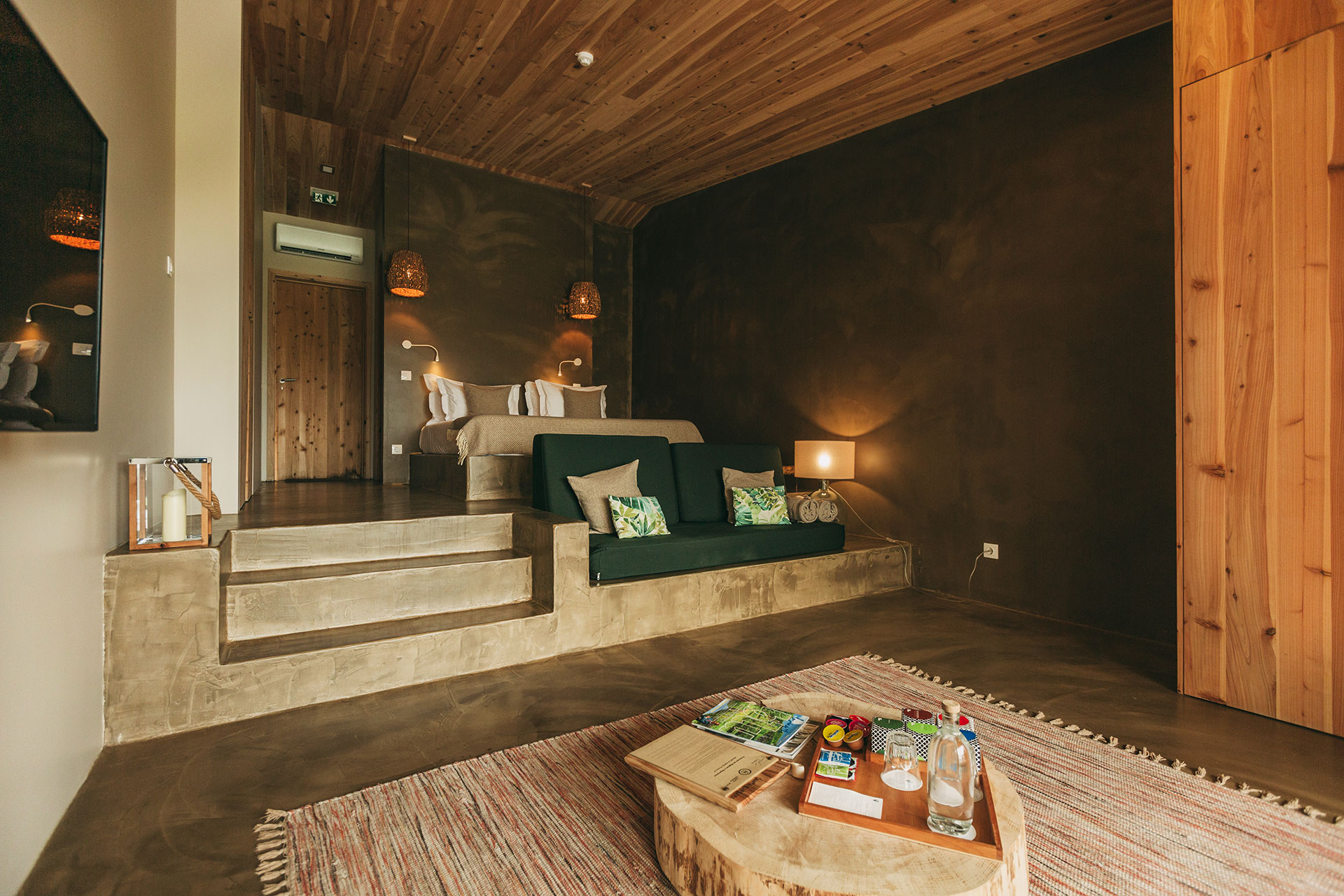 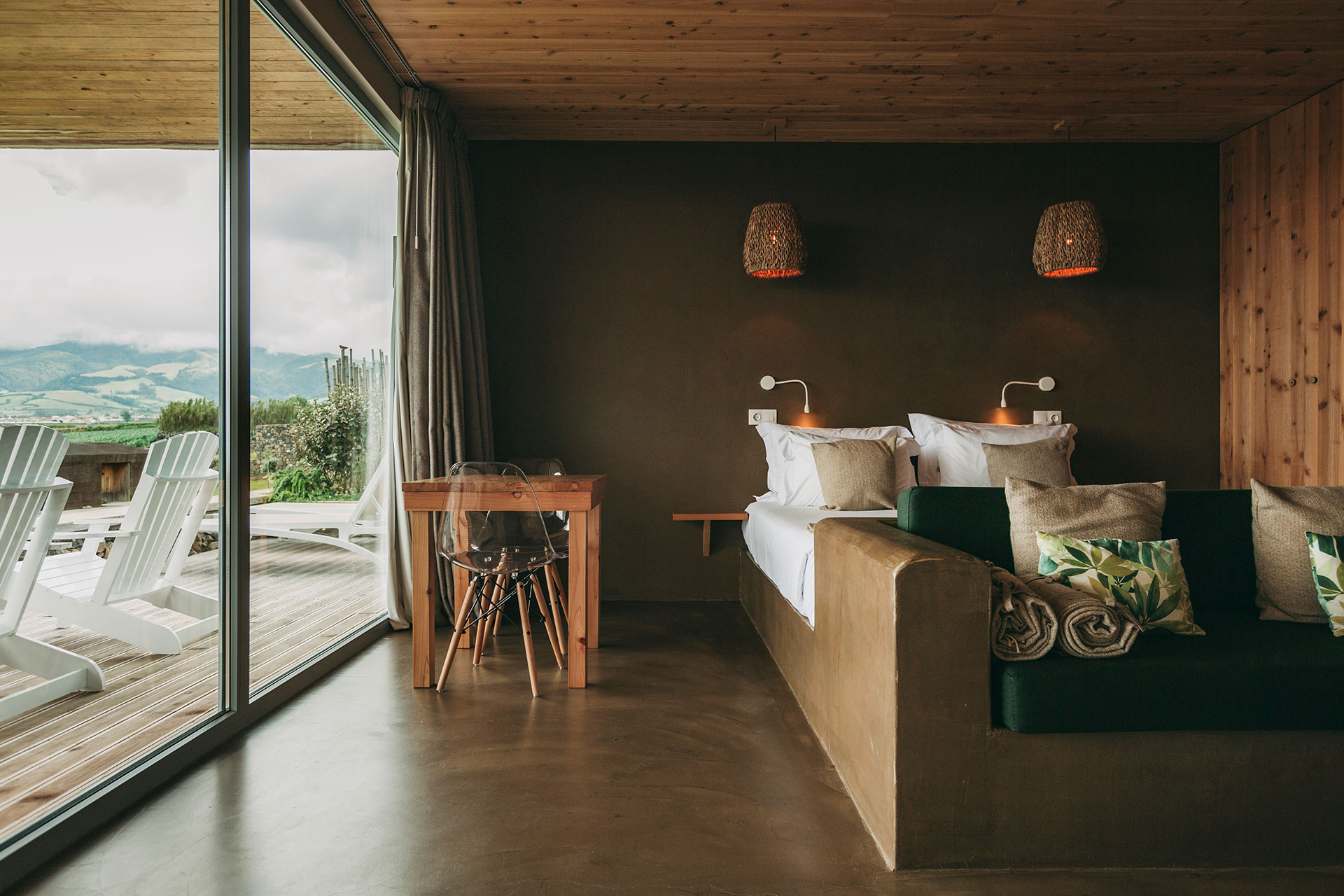 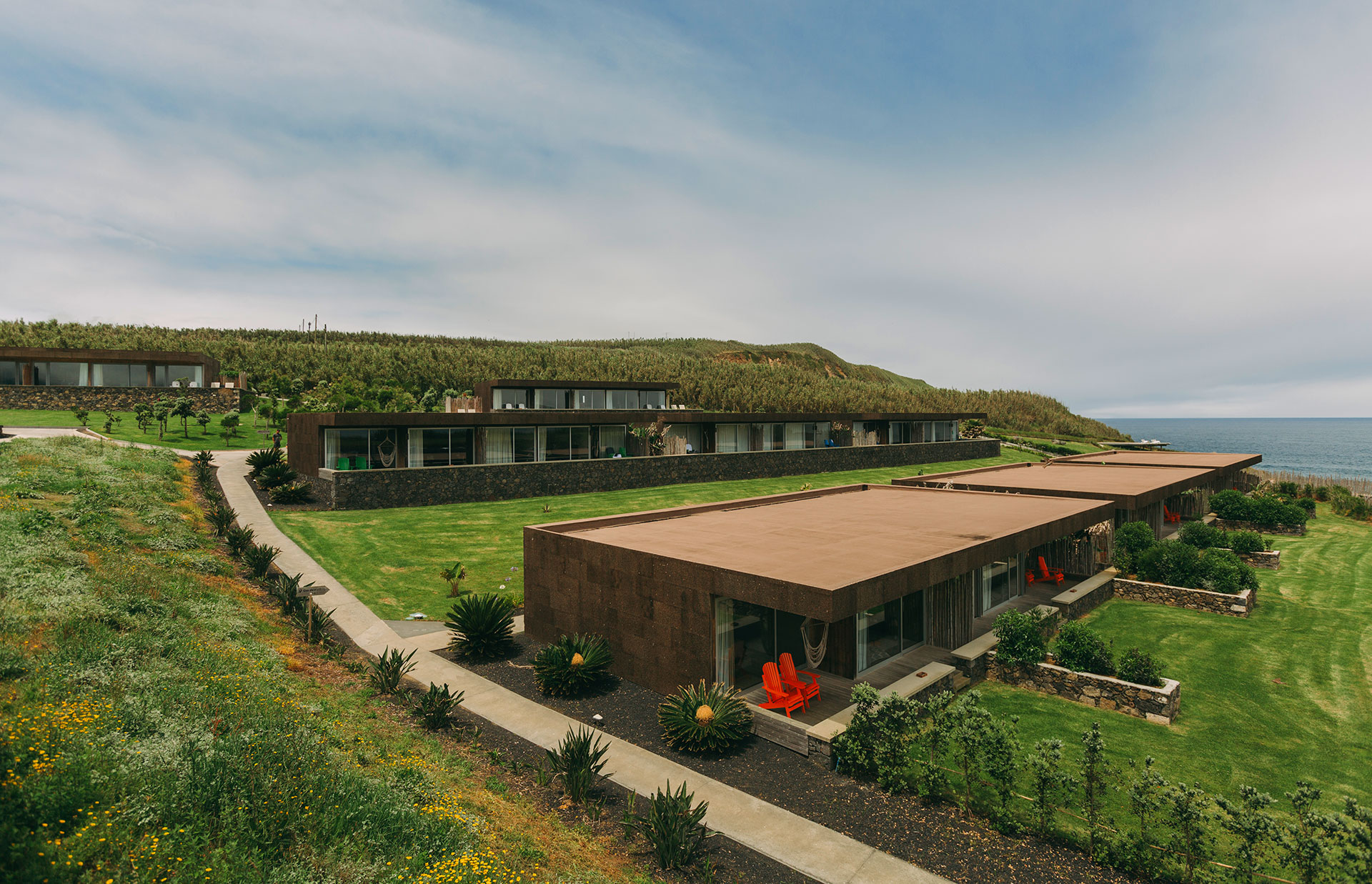 Guests are encouraged to participate in the mission. “We have workshops for little groups and families,” he explains, to learn about what the hotel produces on the island, and what makes it into each restaurant dish. There are beach clean-ups, and even nature-tourism experiences in partnership with local NGOs.

It’s a type of tourism that isn’t just good for the island. It’s immensely appealing. Santa Bárbara Eco-Beach Resort debuted with 14 villas in 2015. By 2018, demand had outstripped supply, and 16 more accommodations were added. That’s about as large a development as you can expect from Singular Properties. All accommodations come with a small kitchenette, living room and balcony, while the Retreat Villas, set on the upper floor, have the best views — and private terrace jacuzzis. Another set of studios open onto the saltwater pool with a view of the sea and hills. And that’s before you leave the property.

No matter how in sync with the landscape, you don’t come to the Azores for a hotel. You come for the Azores. If an average day begins with yoga with a view over the property, it continues with endless excursions into the island. San Miguel is the biggest and most populous of the nine that make up the archipelago, and it is a go-getting vacationer’s gold mine. 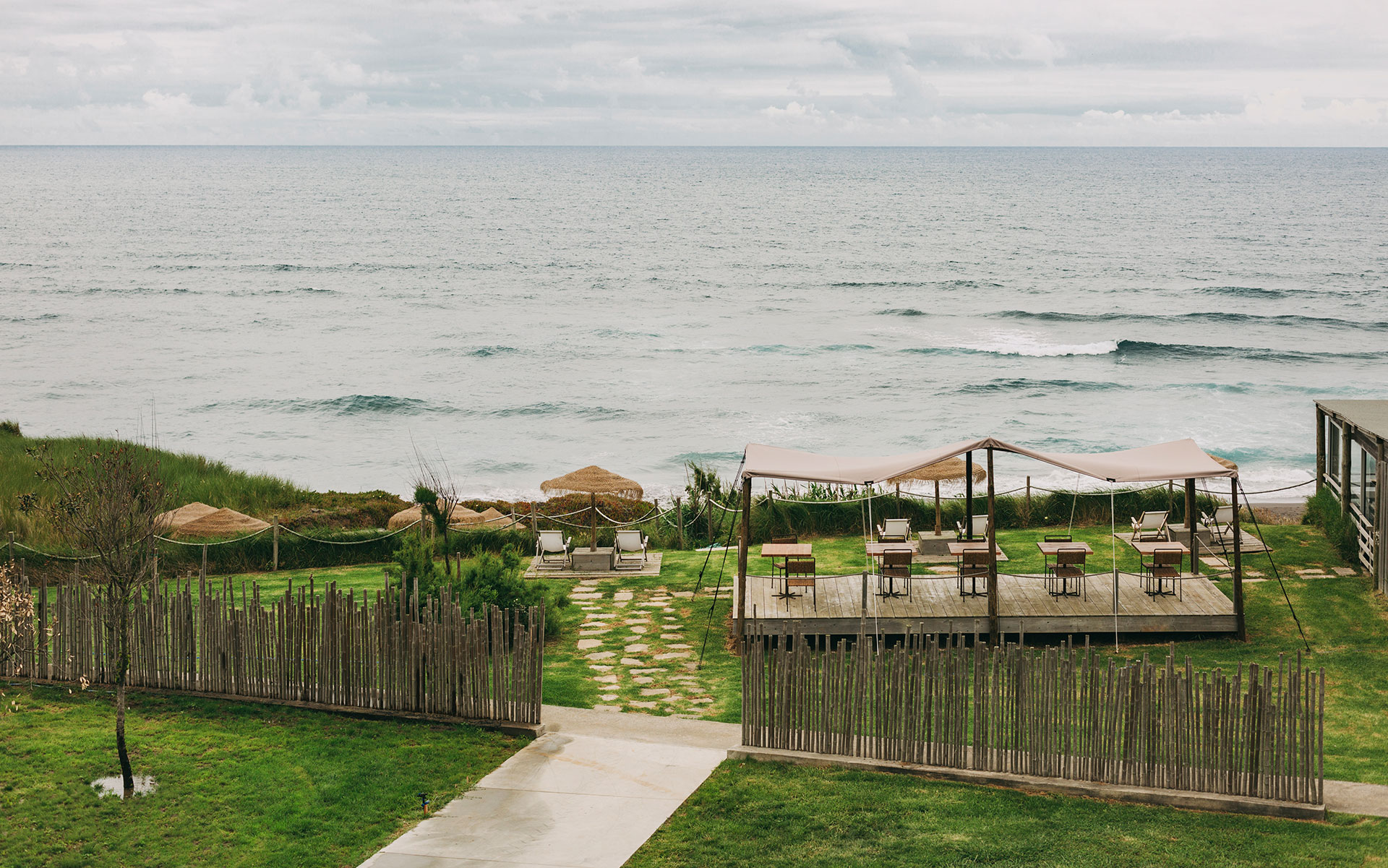 Whale watching and swimming with wild dolphins are both popular activities in the Azores, and well-regulated for the animals’ benefit. It’s not Seaworld — and you don’t meet the dolphins in a pool. You get on a boat, find an appropriate pod, and slip silently into their natural habitat — two at a time, with the dolphins rushing around and below you, their whistles audible under the water. There’s diving and snorkeling, and hikes to natural vistas, lakes, and pools throughout the bright green jungle that inspired the metaphor of an Atlantic Hawaii. And you have all the water sports that led a surfer to build his hotel here, just above the Santa Barbara beach. The hotel has already curated a selection of the best providers on the island for every activity, and you need only ask for a personalized itinerary to make best use of your time.

50 years ago, the New York Times wrote an exposé on these under-discovered islands. “The islanders in short are fraught with a schizophrenic yearning for tourism without tourists,” they concluded. “They want them but say they’re not ready for them.” But even 50 years back, they ended on a hopeful note. “The Azores are opening, little by little, not to mass tourism, but to individual imaginative travelers who have a sporting soul and who do not have to be led by the hand.”

With eco-resorts like this one, the islands are ready to build on that tradition. And in 2022, they might even hold your hand a little. 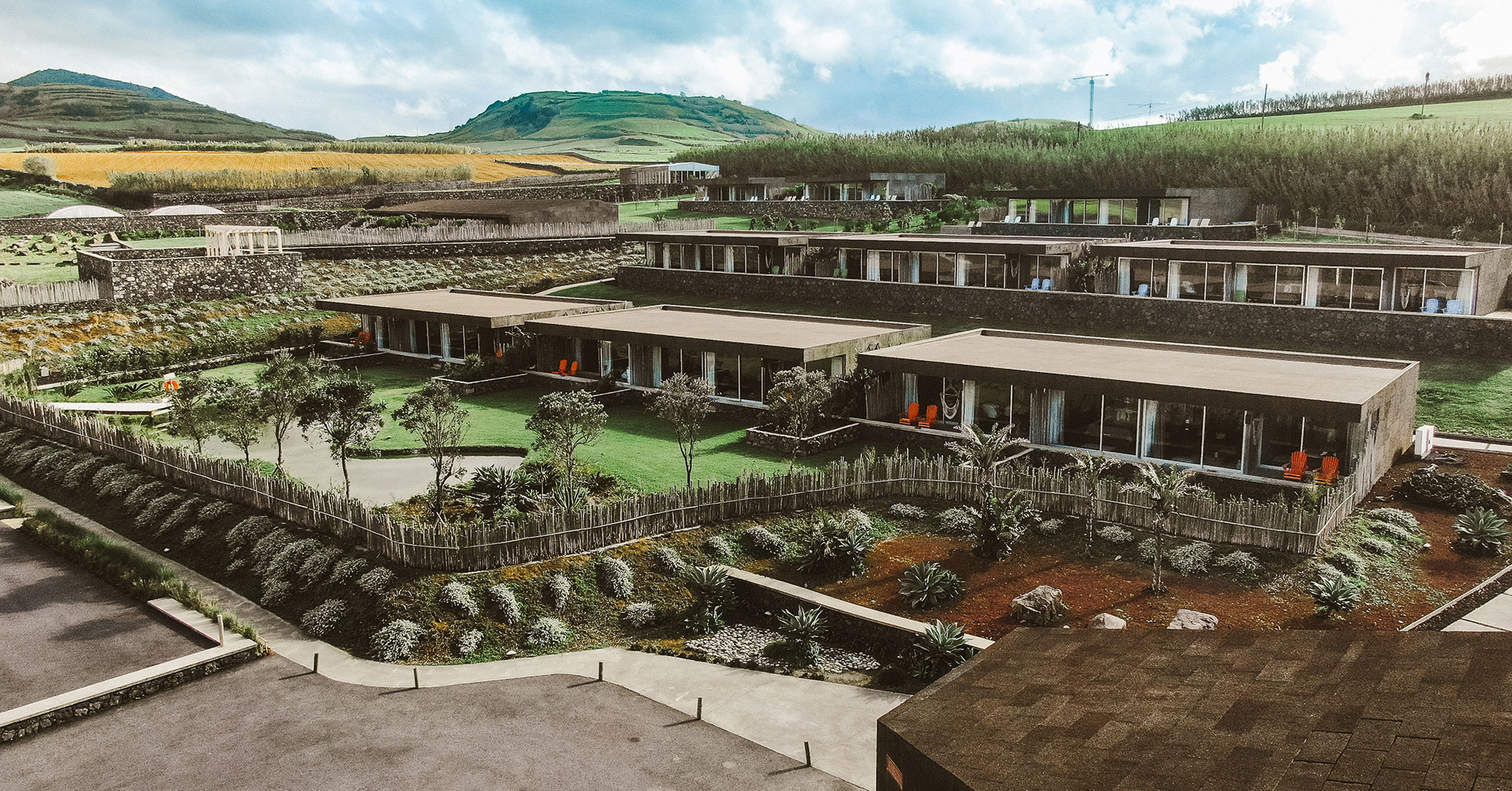