Salt House Nantucket is starting its life as a pop-up hotel. It’s so new it doesn’t even have photography yet, but it might be your last chance this summer to book a great boutique hotel in the Cape Cod region.

The words “the Cape” have a briny exclusivity to them. Summer here doesn’t truly begin until the locals start disappearing to their family homes, and without an invite to tag along, your destiny may not be on these shores. From Falmouth and Provincetown on the mainland to the islands of Nantucket and Martha’s Vineyard, our favorite boutique hotels in the area are intimate affairs, and prime weekends sell out long before the heat rolls in.

But this year, we’re lucky. This year, we received an invitation to the family home: Salt House Nantucket.

We’re proud to be partnering with Salt Hotels on their new Salt House Nantucket. The hotel just started taking bookings for stays beginning July 1, and with beach season right around the corner, it’s one of your last options for booking a top-shelf hotel room in this bustling and barnacled part of the world.

Salt founders David Bowd and Kevin O’Shea bill this summer’s version of Salt House Nantucket as a pop-up. We’ll explain. All three of the hotel’s buildings are completed externally, with no signs of any construction in progress. But a new central barn building is still to come, and with it a new permanent lobby, lounge, and swimming pool. Bowd and O’Shea refused to wait until the end of Nantucket’s summer construction moratorium to debut. They’ve completely finished two buildings and eighteen rooms, after all, and like anyone who’s lived through New England’s winters, they know that wasting a summer is not an option. The hotel will stay open until the end of September before closing again until 2023.

Bowd and O’Shea have always been enamored with the pop-up concept. They just never found the right opportunity until now. “It’s almost like a friends and family moment,” Bowd tells Tablet. “We’ll be asking every guest, what did you think about it? What could we change?” Don’t let the renderings distract you. The fact that Salt House Nantucket doesn’t have proper photography yet is almost charming, a sort of return to innocence that seems appropriate for the region, and allows for some mystery and surprise. Of course, if Salt’s other Cape hotels are any indication — Provincetown’s impressive Salt House Inn and Eben House — the surprise will be exceedingly pleasant.

In the 18 rooms that open this summer, the hotel will trade on the oft-overlooked farming history of their neighborhood, eschewing the more common harpoon-chic aesthetic for a light and contemporary look that’s nonetheless unafraid to splash the requisite schooner artwork on the wall. They’ve built an indoor/outdoor bar and lounge where you’ll find drinks and complimentary breakfast, and set up lawn games and fire pits. There will be bikes for crisscrossing an island that’s fifty percent protected, and a concierge to set you up with whatever aquatic leisure activity fills your own personal Nantucket fantasy. It’s nothing less than a three-month party, a “celebration of summer on Nantucket.”

If the goal is to celebrate summer, the salty air of Cape Cod and the Islands is the place to do it. The dozens of stellar boutique hotels here, set mostly in refurbished old inns or Victorian or colonial-style homes, trade easily on the region’s nautical history. An almost shocking number once belonged to honest-to-God boat captains. Not that you’ll find Captain Ahab sipping a proudly local cranberry-infused vodka — but the long expanses of protected land and seascape, home to heron, osprey, and humpbacks, ensure that the seafaring life is never far from your mind.

Below, explore some of our favorite hotels for the quintessential New England summer escape. At this point in the year, the available rooms are few and far between. Fortunately, Salt House Nantucket is here to relieve some of the congestion. 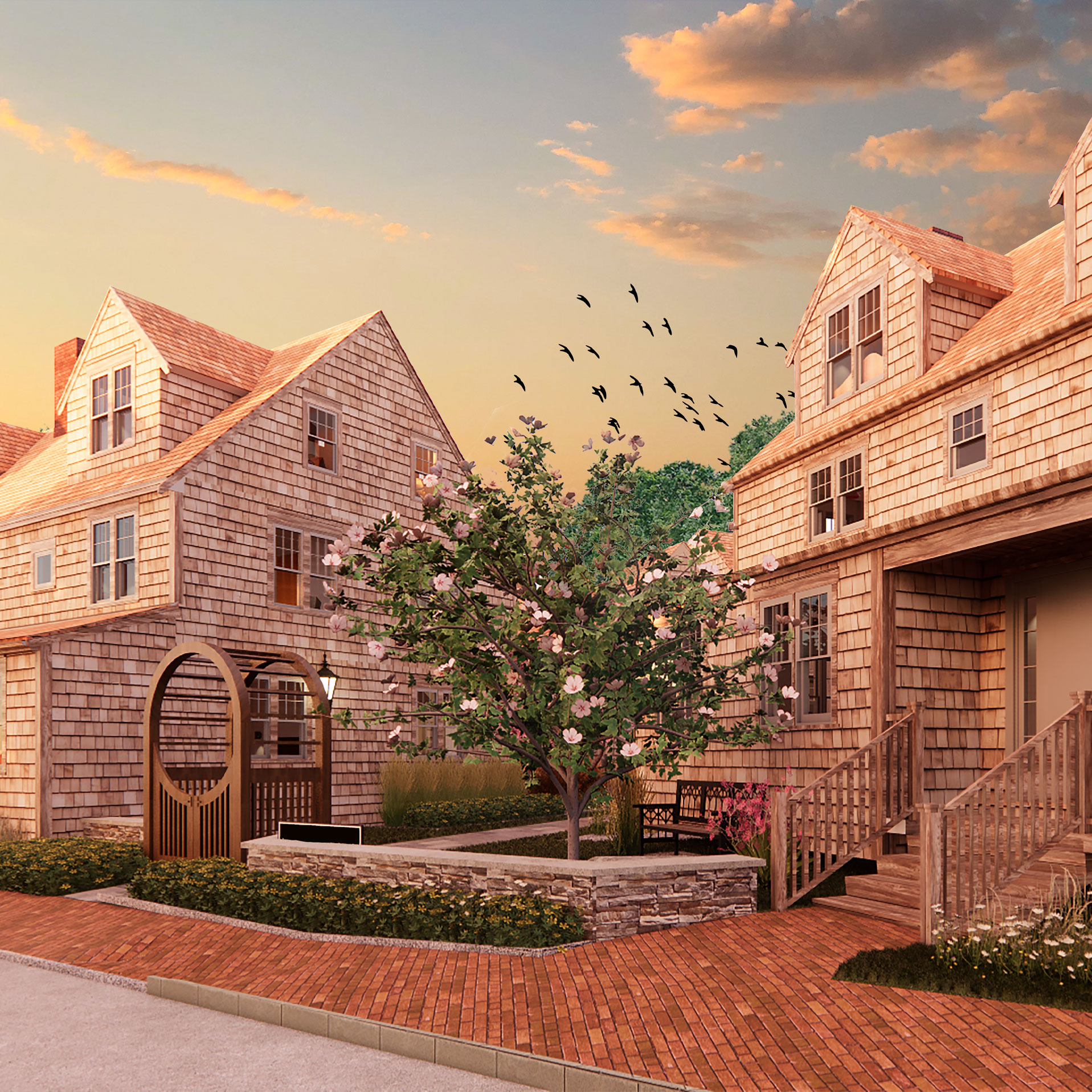 What else can see say about Salt House Nantucket? The bones of the place are from the old Brant Point Inn, a classic bed and breakfast built in a convincing 17th-century replica style. It’s been extensively renovated, and its new look is an aesthetic departure for Nantucket, foregoing the typical whaling-captain inspiration in favor of something more agriculturally inspired. The hotel is set in one of Nantucket’s most desirable corners, a short walk from the port and the town’s main drag, but just quiet enough for a bit of privacy. 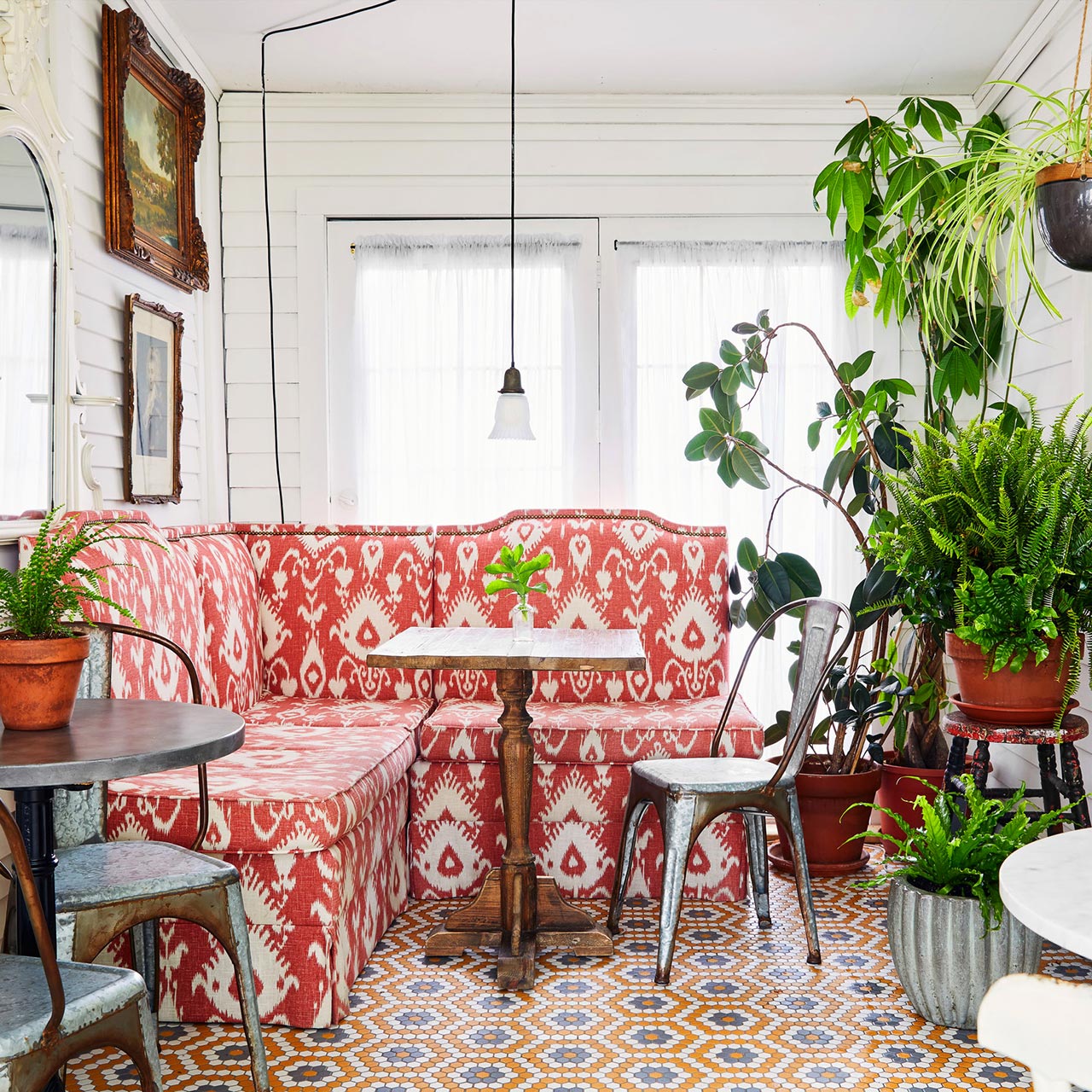 In some ways, the Eben House is among the most traditional lodgings in Provincetown — it’s housed in one of the oldest remaining Federal-style houses in town, an old sea captain’s house that dates back all the way to 1776. But its proprietors are modern boutique hoteliers at heart, and the Eben House is practically the very definition of the contemporary boutique bed and breakfast. 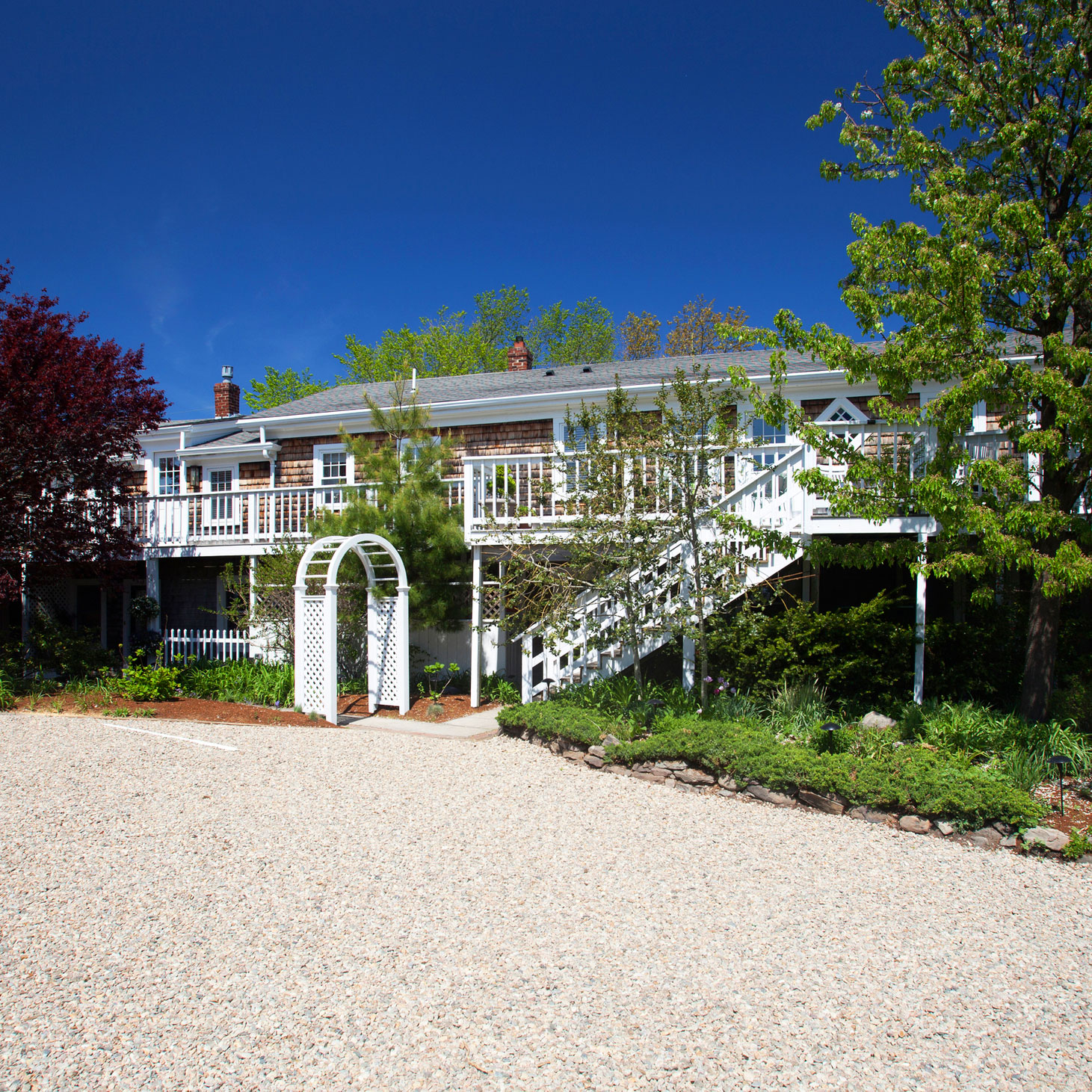 One part boutique hotel, one part classic B&B, the Salt House Inn is set just close enough to Provincetown’s main drag to feel lively, and just far enough away for a bit of privacy. In other words, it’s a study in balance: stylish enough for design-savvy travelers, without losing touch with its circa-1850 heritage. 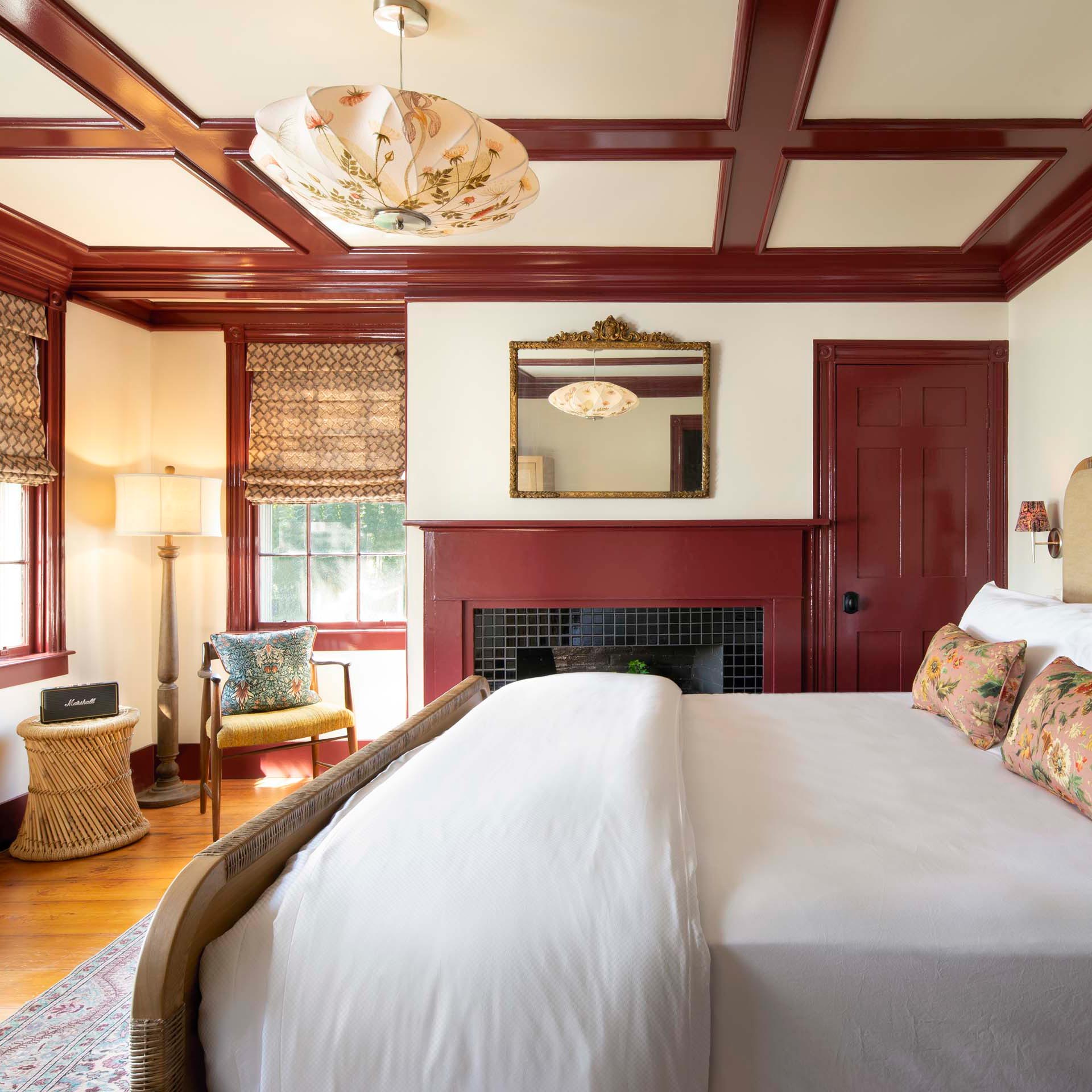 This old sea captain’s house became an inn in the 1830s, and while it’s been thoroughly redesigned — and functionally been brought up to 21st-century luxury-boutique standards — it’s full of details that suggest a long and eclectic history. A fine breakfast is the only meal served, unless you count afternoon tea in the gardens, but from this location you’re meant to get out and explore the town. 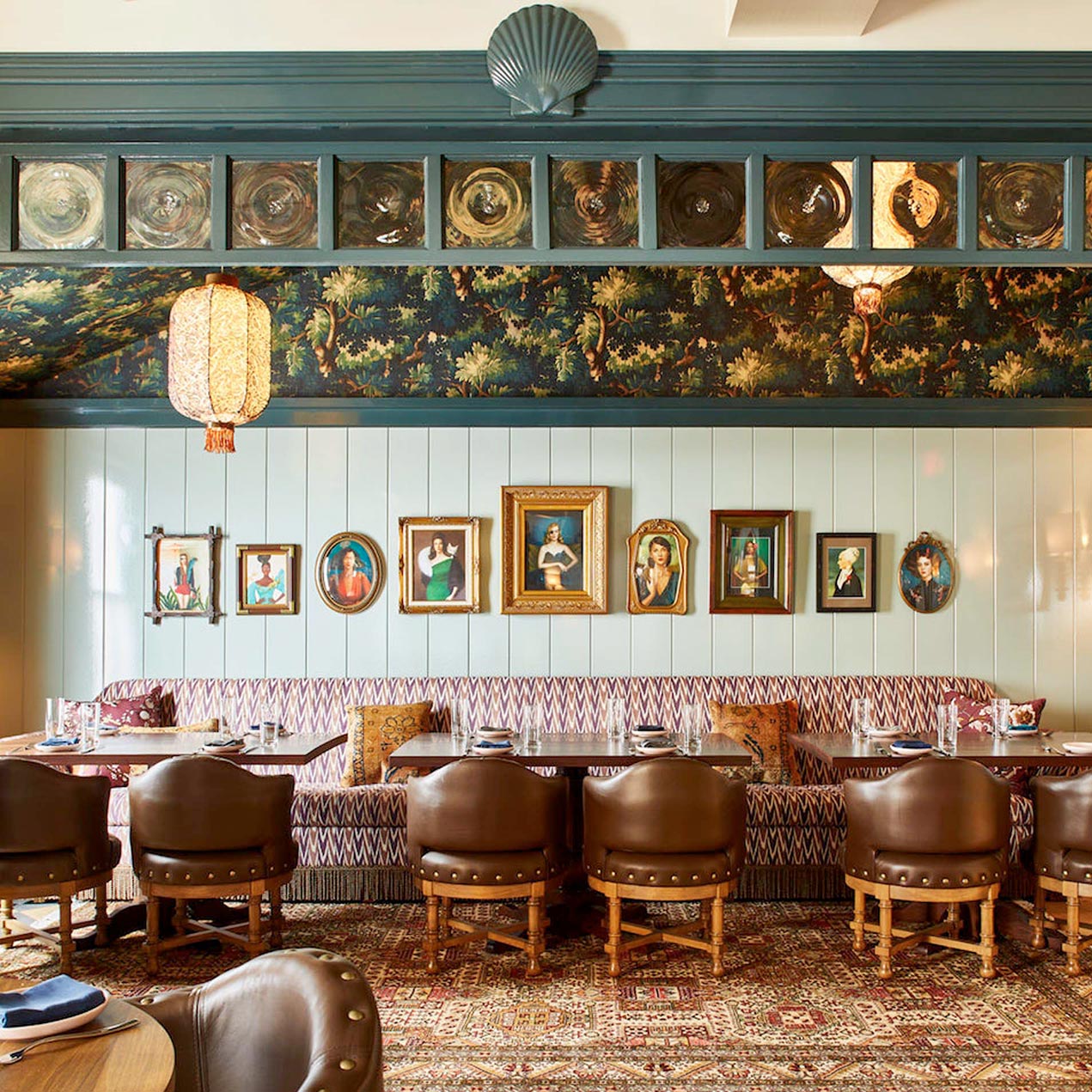 Given the small size of Nantucket’s downtown historic district, to have just one house there would be a stroke of good luck. To have four — especially four in a cluster all together — is extraordinary. Faraway Nantucket finds itself in exactly this situation: four houses, as old as 1846 and as new as 2013, around a courtyard lounge, converted into a 58-room boutique inn. 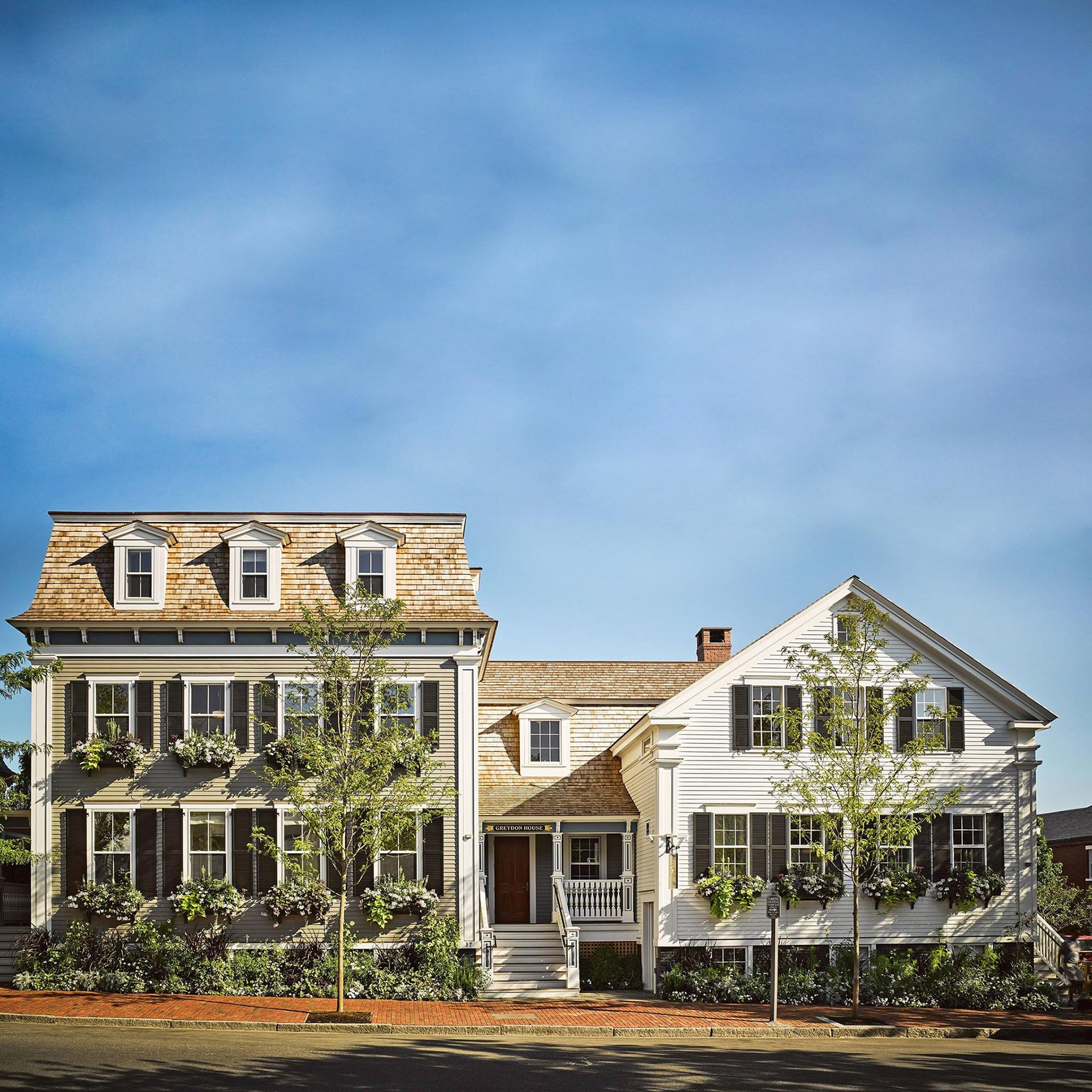 We’ll follow hotel designers Roman & Williams anywhere, but it’s a surprise to see them in Nantucket, where the Greydon House, a renovation and expansion of a 19th-century sea captain’s house, delivers its own version of New England maritime-chic, while studiously avoiding the local clichés. The town-center location is perfectly convenient, and the rooms, as usual, are beautifully stylish, and full of carefully considered detail. 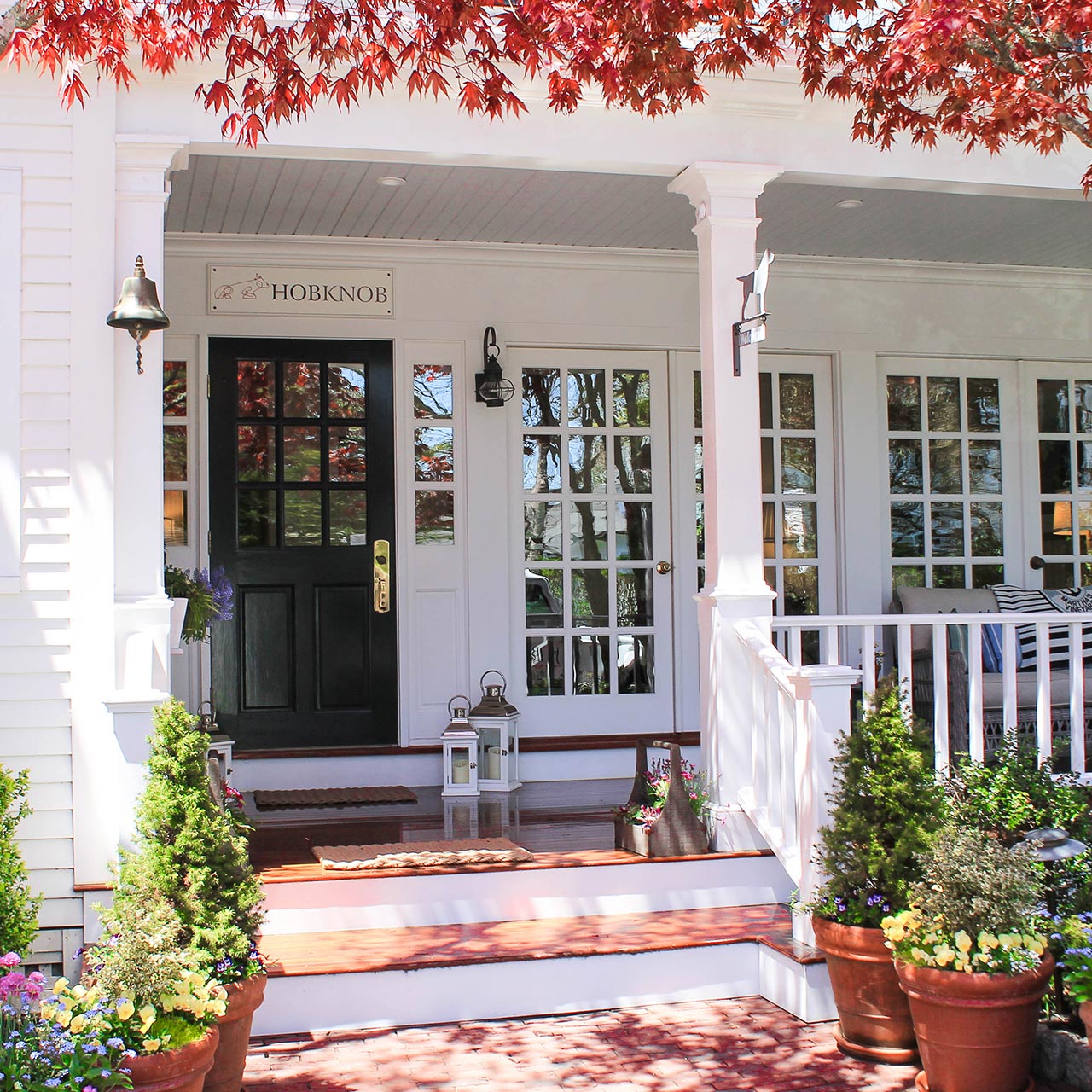 Hob Knob, a charming 19th-century house in Edgartown that’s been converted into a small and intimate 17-room boutique-style hotel, is a remarkably well-preserved piece of Gothic Revival architecture. The interior style is classic meets contemporary, traditional in character but all sparkling new. The focus is on creature comforts, with heaping king beds, plush robes, high-tech in-room amenities and plenty of space. 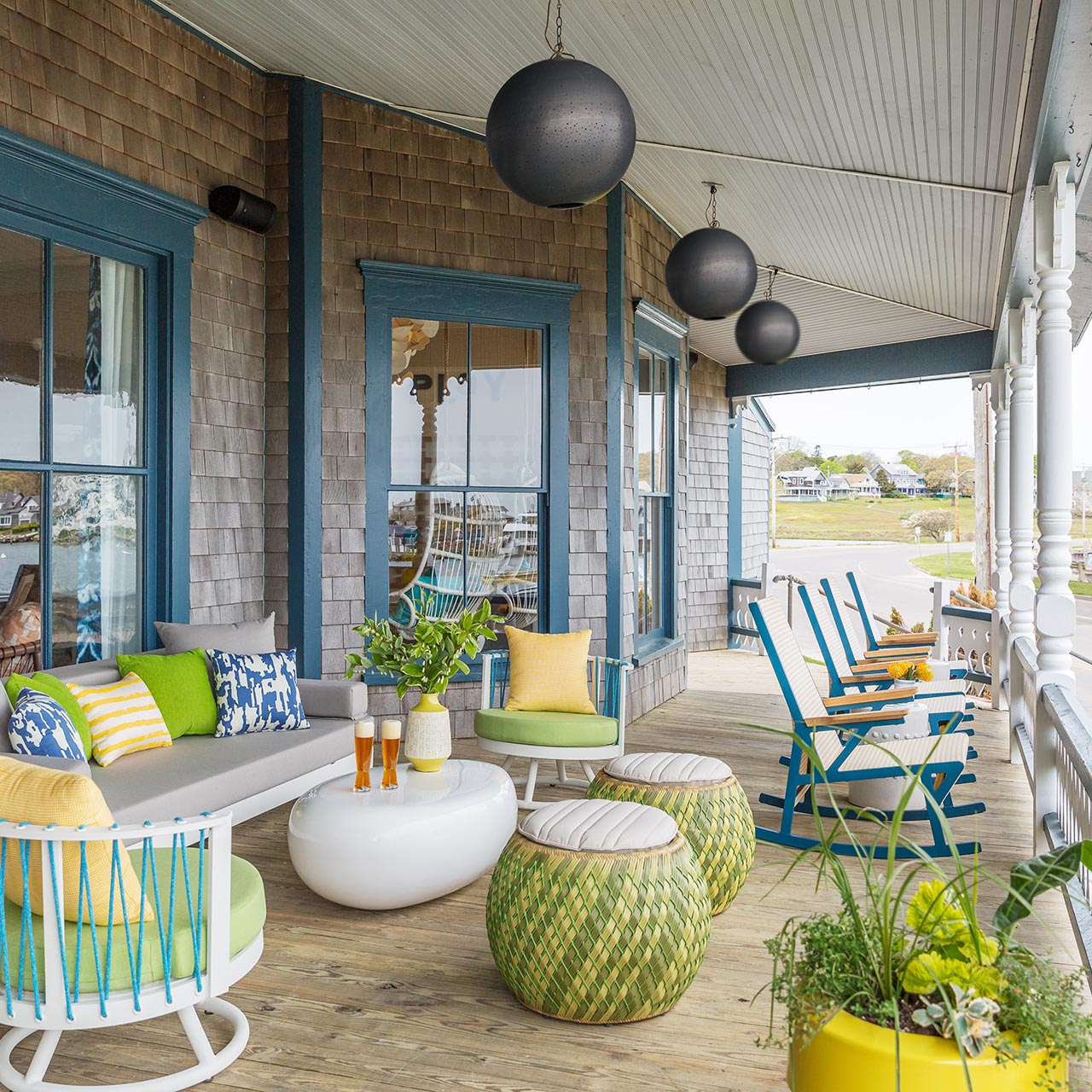 The town of Oak Bluffs, on the island of Martha’s Vineyard, has a rich history as a Methodist camp destination, centering around Summercamp’s neighborhood of Wesleyan Grove. But the name’s not only a reference to the building’s history — Summercamp, in its current incarnation as a Lark hotel, is a fun and stylish hotel that aims to bring to life a modern-day, grown-up version of all of our summer-camp fantasies. 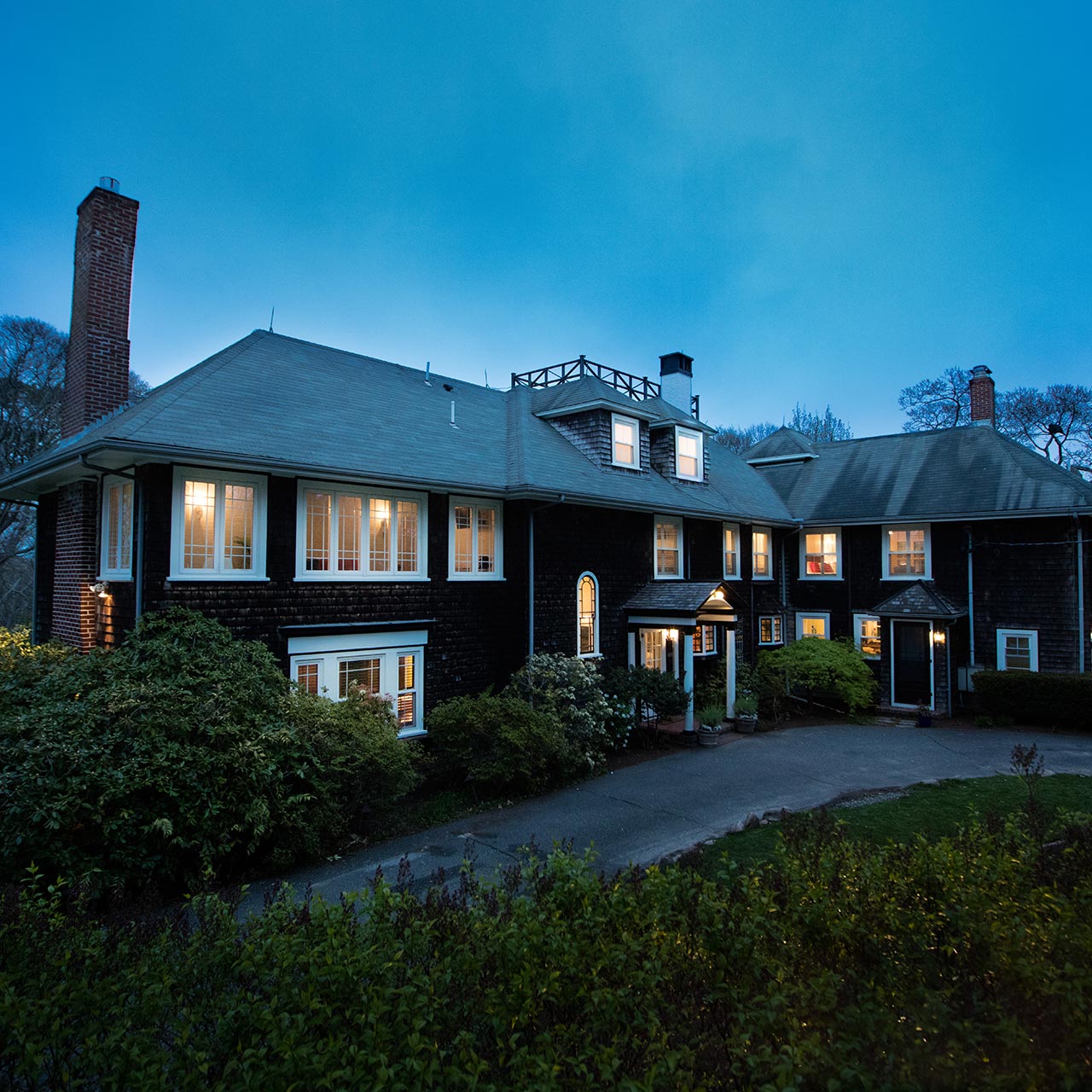 Located on Martha’s Vineyard, a short walk uphill from the dock on a on a bluff above Vineyard Haven, this 1908 Arts & Crafts-style house was once the home of the island’s doctor. The new owners overhauled the place, knocking down walls to create open living areas, polishing the hardwood floors, installing large picture windows to maximize the sweeping garden views. Floral wallpaper and bric-a-brac, be gone. 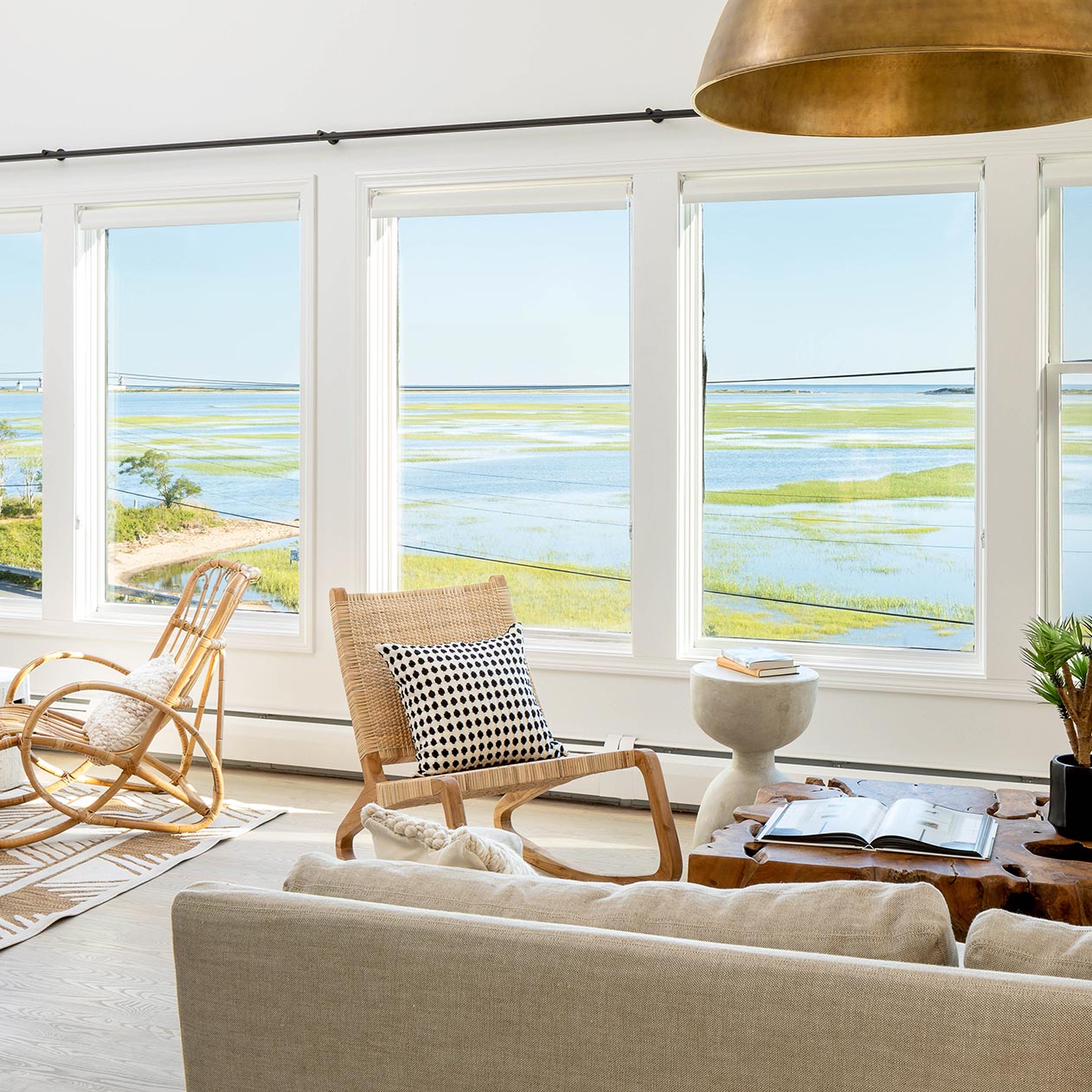 Like so many phrases of military origin, “AWOL” — Absent Without Leave — is now a part of standard American English, implying an unusually thorough escape. It’s a name that makes perfect sense once you see AWOL Hotel for yourself — while Provincetown is a popular destination, and anything but uncivilized, AWOL stands at the edge of the West End, overlooking not the town but the picturesque desolation of the moors. 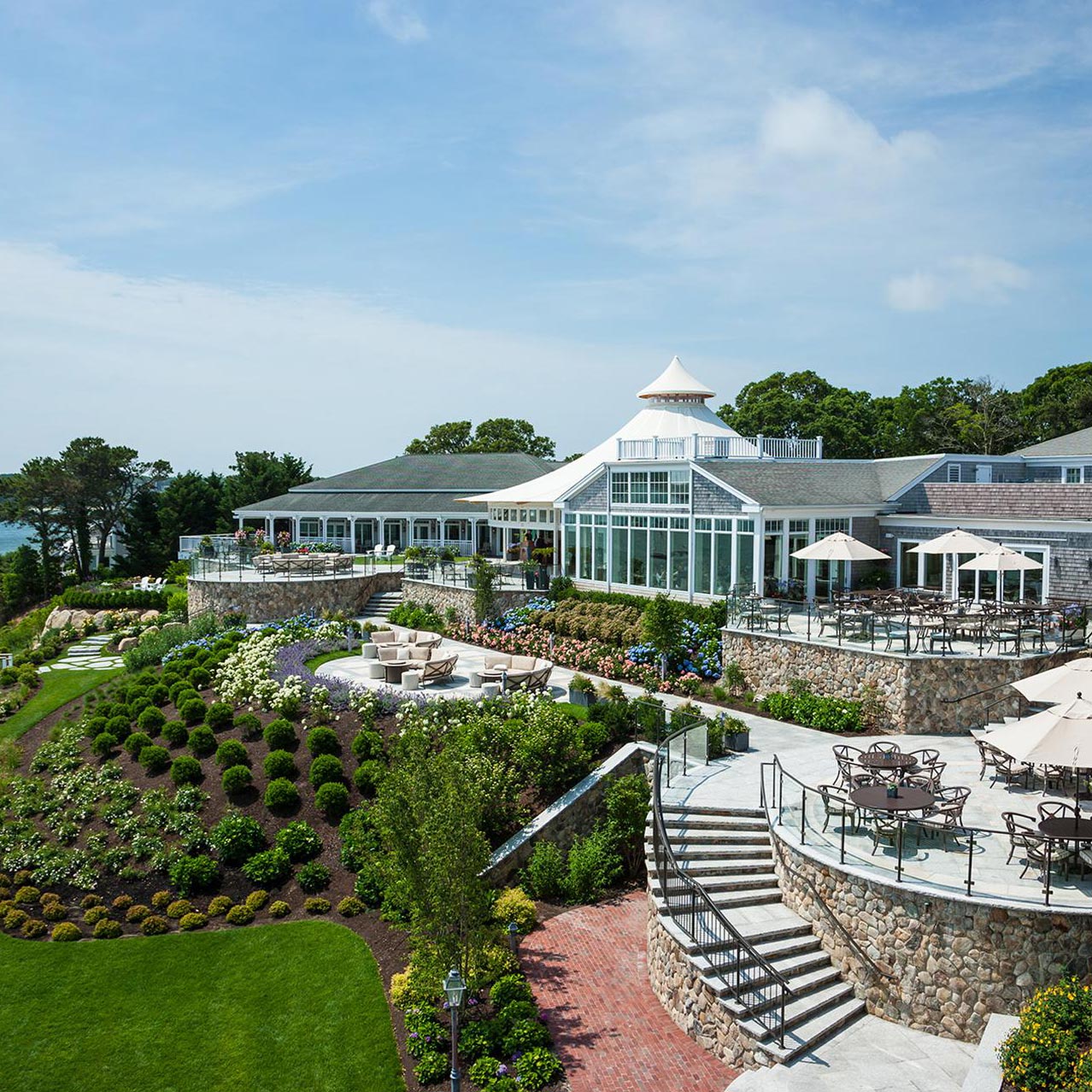 According to many New England luxury travelers, this is Cape Cod’s top hotel, and when upscale Bostonians hit out for the coast, as often as not this is where they do it. Chatham, on the quaint little elbow of the Cape, is a classic, unspoiled seaside town, and the Wequassett Resort and Golf Club is the rambling little village resort we always dreamed we’d find there. 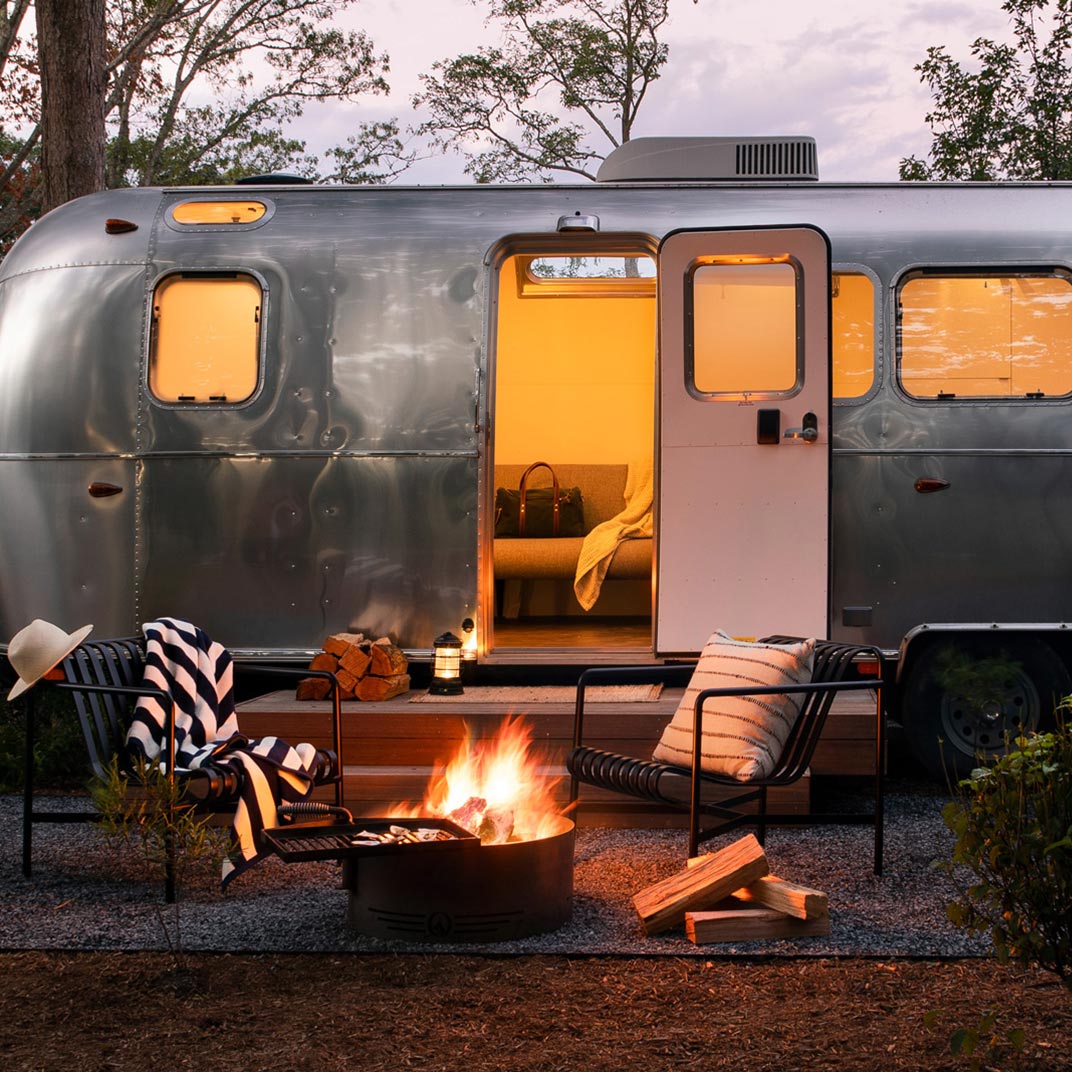 AutoCamp Cape Cod features luxury tents, modernist tiny houses, and a fleet of custom-designed Airstream trailers among its lodging options — all comfortable, all photogenic, and all closer to nature than a typical hotel. And for any comfort you can’t find in your trailer, there’s the Clubhouse, with its fireplace, bar, and general store.