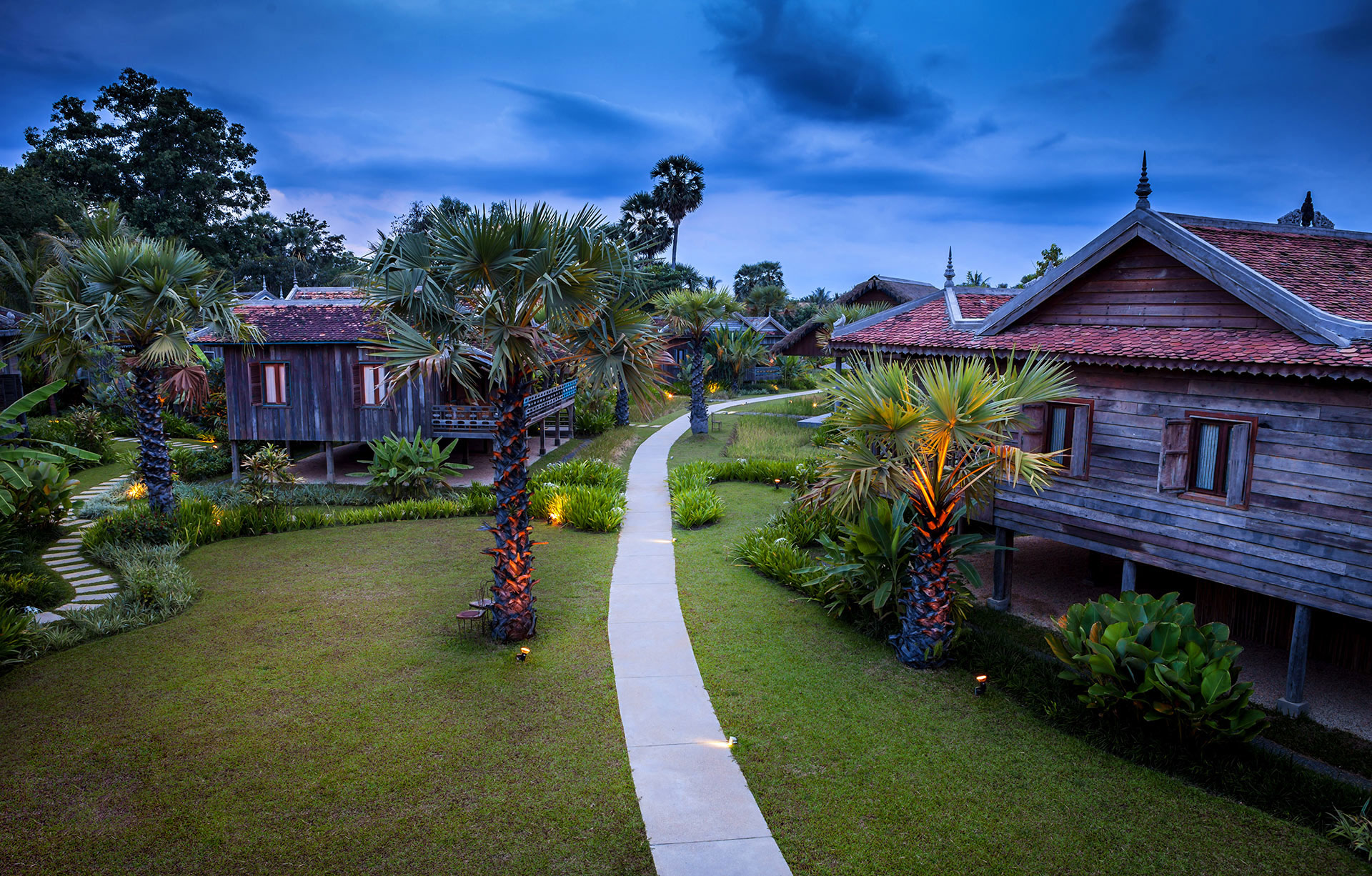 In Siem Reap there’s a rare opportunity — a chance to sleep in authentic Khmer houses, constructed long ago, transported from all across Cambodia, and reassembled with their soul and story intact at Sala Lodges.

Hotelier Arne Lugeon used to crisscross the Cambodian countryside on motorbike. Gazing at the beautiful wooden houses amidst the provinces, he and his wife couldn’t let go of the idea of opening a hotel in this country they’d come to adore. He was particularly captivated by the dramatic stilts under each house, a necessity to deal with flooding, and the intricate carvings that adorned the rooftops and terraces. Most importantly, though, he noticed a nomadic tradition.

This was the detail that would spark the genesis of Sala Lodges, one of the most inspired hotels on Tablet. “We saw people dismantling these magnificent wooden houses,” explains Lugeon, “moving a few kilometers and then rebuilding them. So that’s when we said, ‘Ah, maybe we can do that.’”

We talk a lot about the importance of a hotel transporting you to a different place, letting you try on a different life. To stay at Sala Lodges is to stay in actual, traditional Khmer housing, brought to this site in Siem Reap from all over Cambodia. Sala consists of houses once owned by everyone from carpenters to fishmongers to retailers of gold and prahoc (fermented fish paste). Each was built between 1956 and 1985. The largest was once an army barracks.

It took two and a half years for Lugeon and his co-founders to acquire the homes. It was a grueling process. For every three homeowners they found who wanted to sell, seven had no interest. That was just beginning of the challenge. Once acquired, then came the actual de- and reconstruction. “I don’t know if you know the furniture concept of Ikea?” Lugeon half-joked to Tablet, about the mobility of the houses. “Yeah, it’s exactly that. You can build it once. It’s beautiful. You can maybe dismantle it once, it’s beautiful. But third time you break everything. It’s exactly the same.” To that end, three houses didn’t make it to their new destination. It was just as well; their parts were used for repairs. 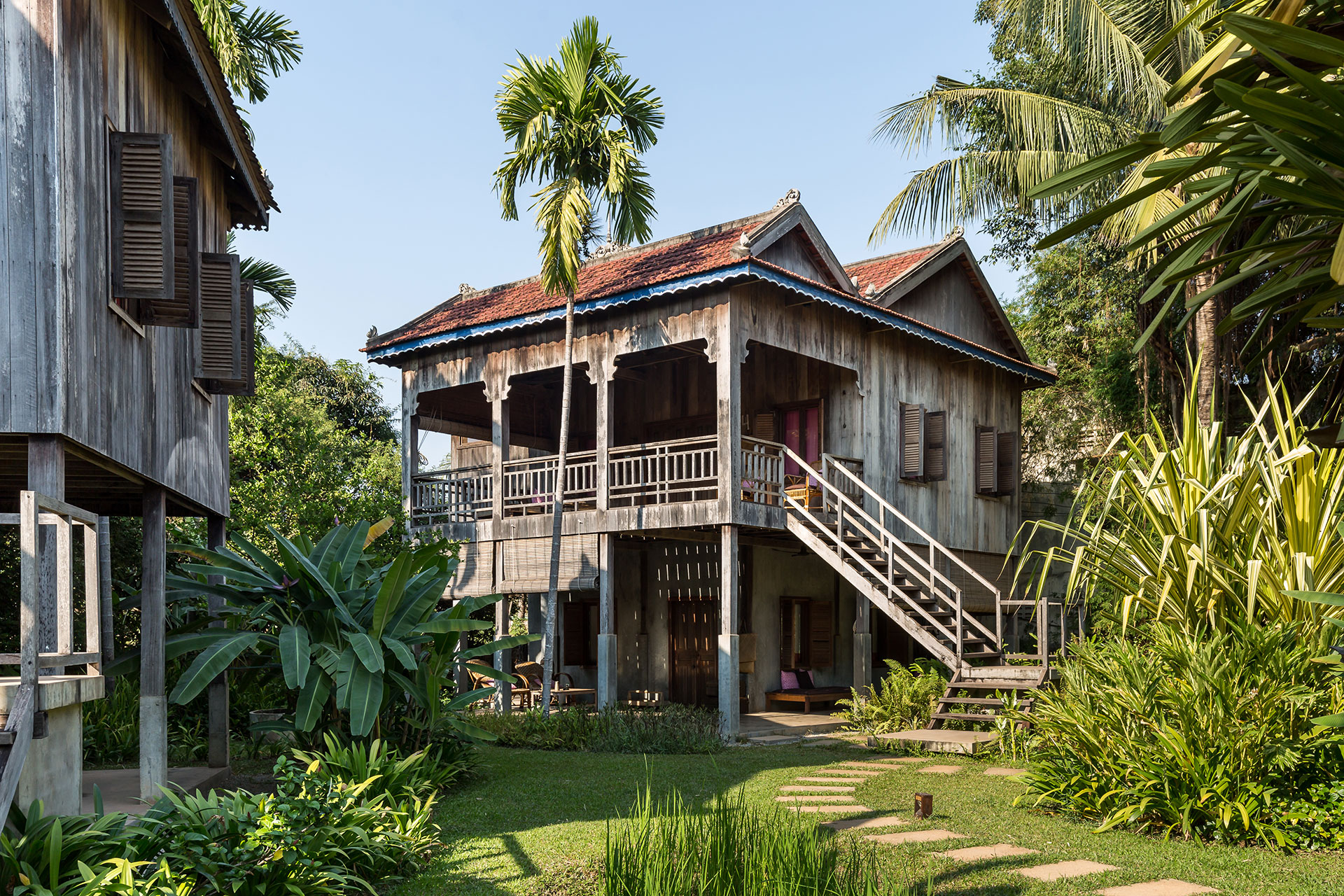 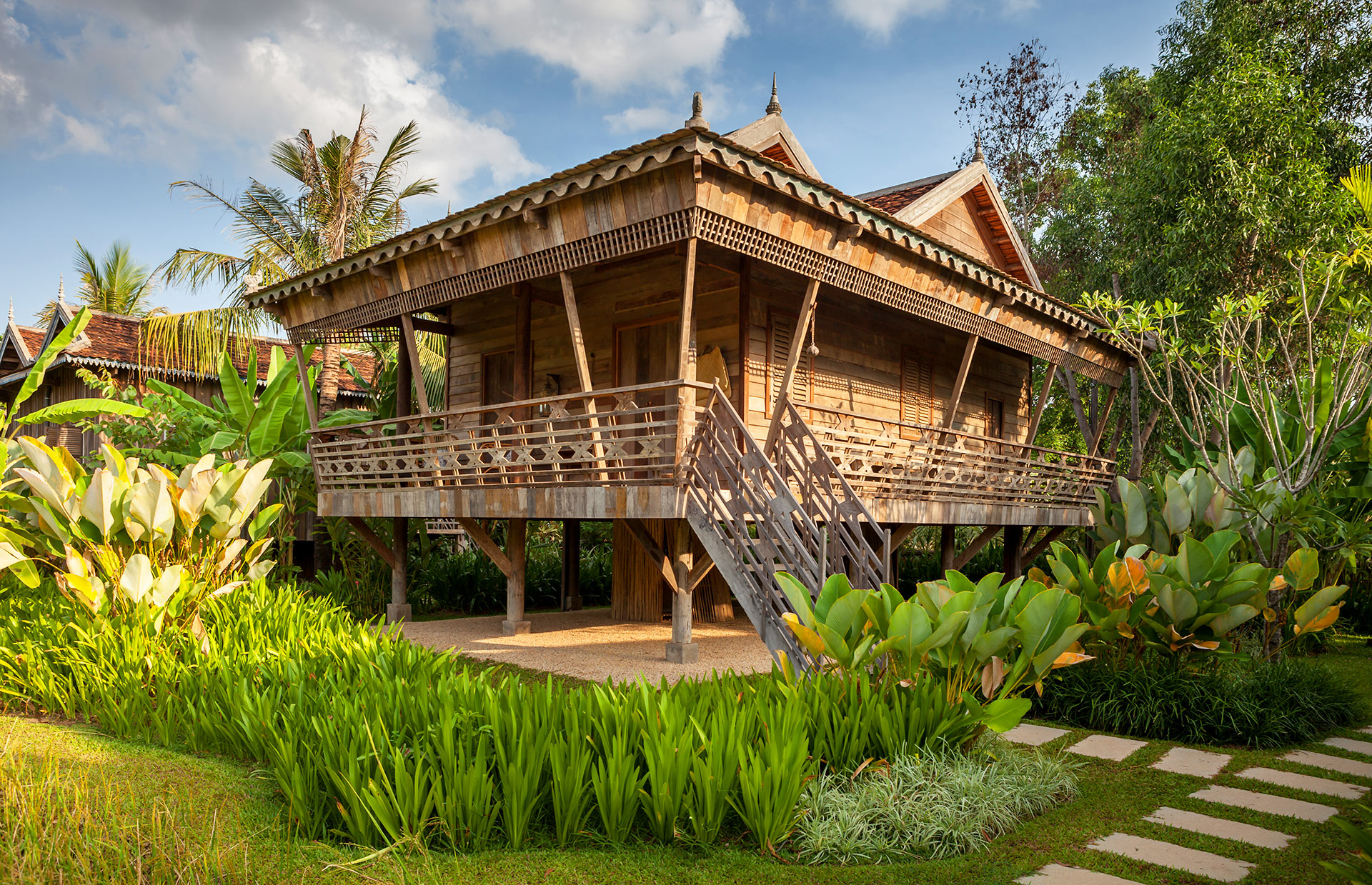 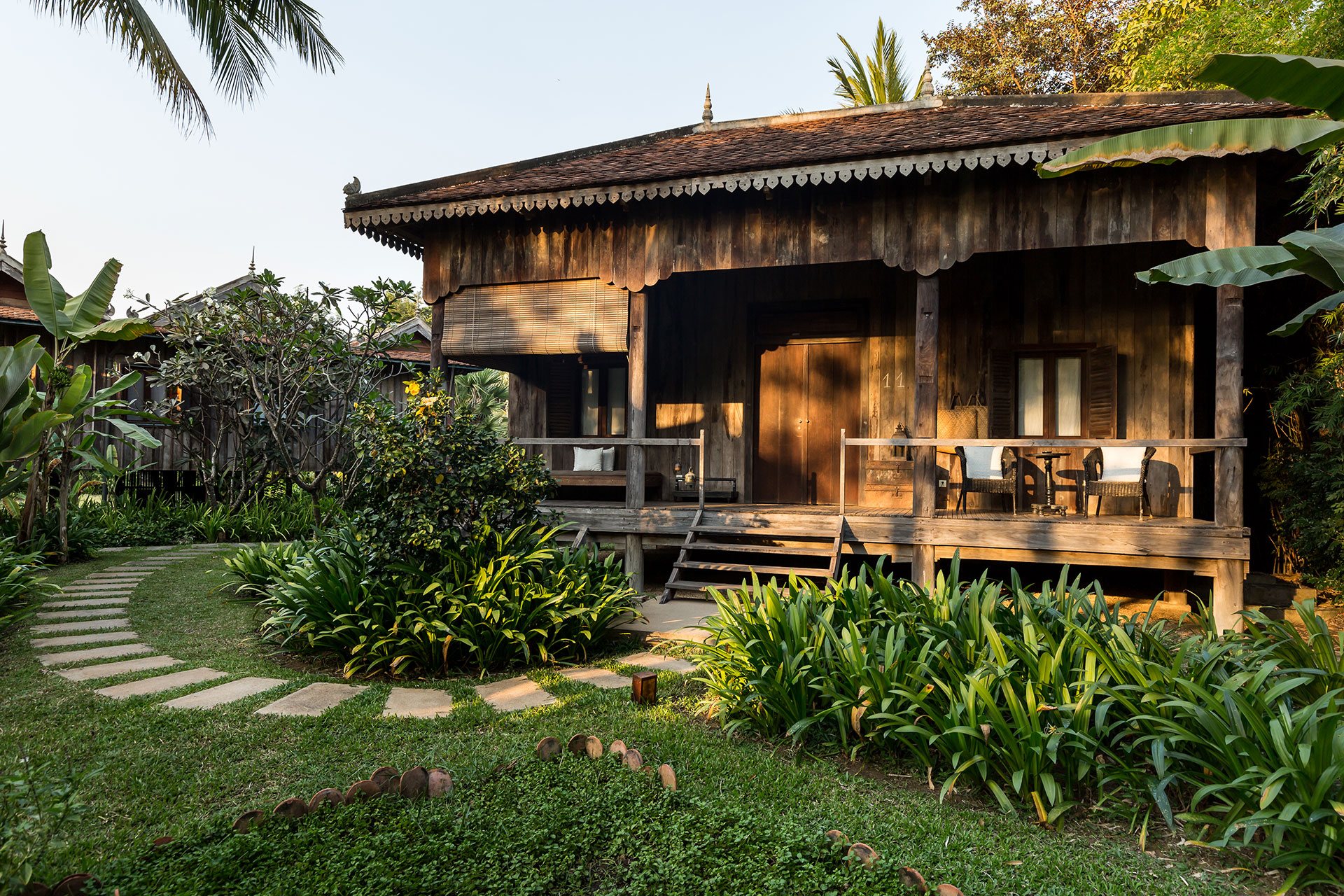 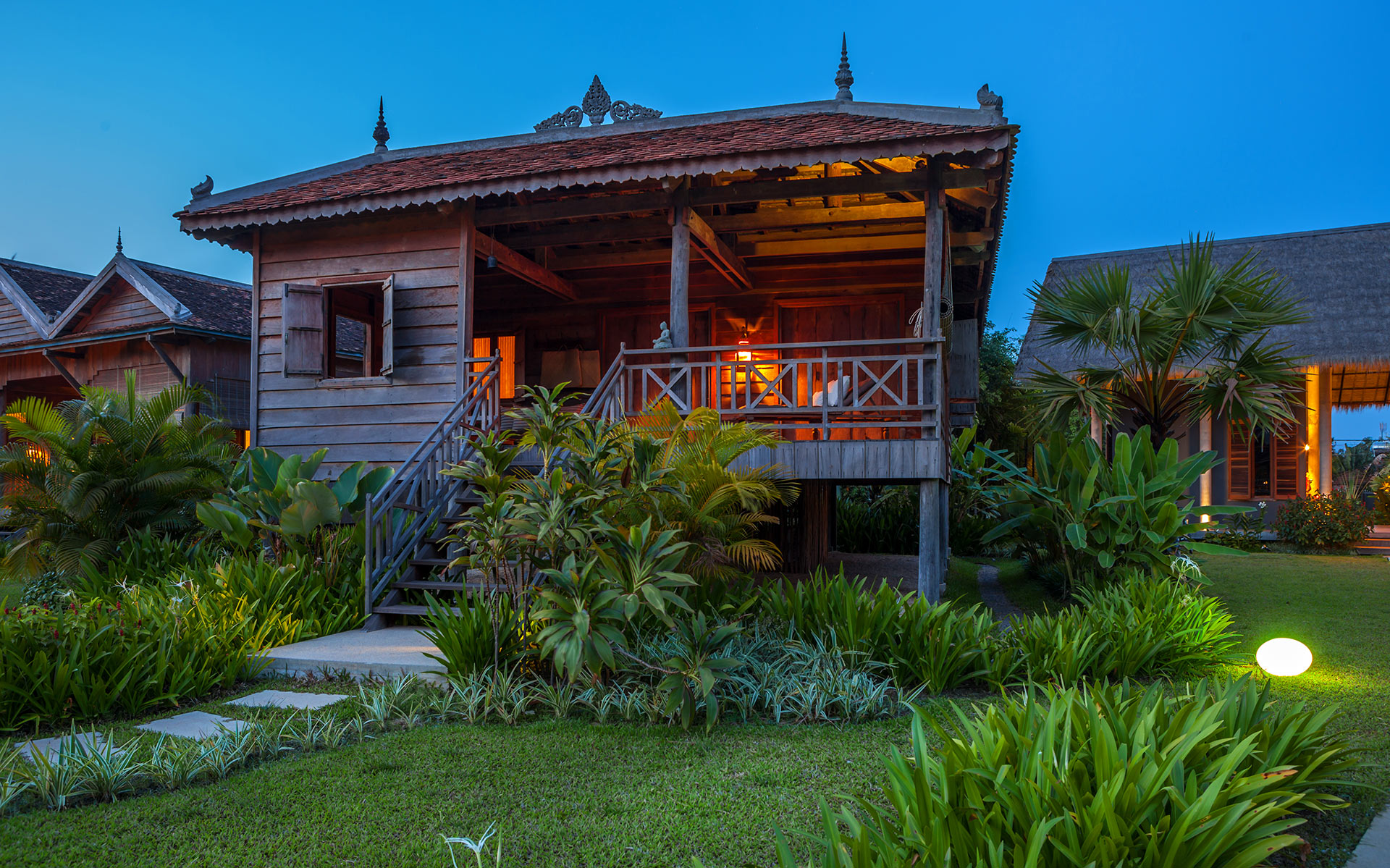 Sala’s eleven lodges are spacious, despite most containing only a single bedroom — a byproduct of the way of living in the countryside, with multiple generations under one roof and few permanent dividers to separate family. All the lodges are immediately distinct, with their intricate roofs and carvings, embellished whittlings that dangle above terraces. Each has a small “vegetable patch,” a detail that helps contribute to the property’s feel as a small, idyllic village that sprouted from nowhere. Even the palm trees, which take years to grow, have been transported here from the countryside. Views gaze out over the brimming gardens and sunken rice paddies, and the homes still balance sturdily on stilts.

If it looks precarious now, consider that the original legs on each home were much taller, having now been chopped at the knees — a concession to the logistical needs of guests who wouldn’t want to climb a towering ladder each time they returned home from the open-air lounge.

Besides the modern bathroom added to each dwelling, the beautiful furniture from Rajasthan, India, is another anachronistic concession — one that fills the spaces as an aesthetically pleasing homage to the Hindu origins of the nearby Angkor, the extraordinary temple complex that draws millions of tourists a year to its ancient ruins. A different kind of history draws guests to Sala Lodges — a more down-to-earth, more relatable craftsmanship. The houses are pristine examples of centuries of local architectural tradition, but much older in spirit than they are in years. That makes them perfect for their new purpose as luxury hospitality, sensitively updated with comforts like wifi and air conditioning.

There are other contemporary appendages at Sala. The newly built public spaces (pool, bar, restaurant, and lodge) employ concrete for a modern look the Phnom Post called “uber-chic,” but were nonetheless designed to highlight and complement the lodges. Because it’s all about the lodges, and the rare opportunity they provide to guests.

“Why do reconstruction rather than building from scratch?” asks Lugeon, one of four founding owners with his wife and one other couple. “We wanted to bring to visitors of Cambodia the opportunity to experience real living. And real living if you reconstruct it is not real living.”

“These houses have souls,” he says. “You can believe it or not, but they do.” 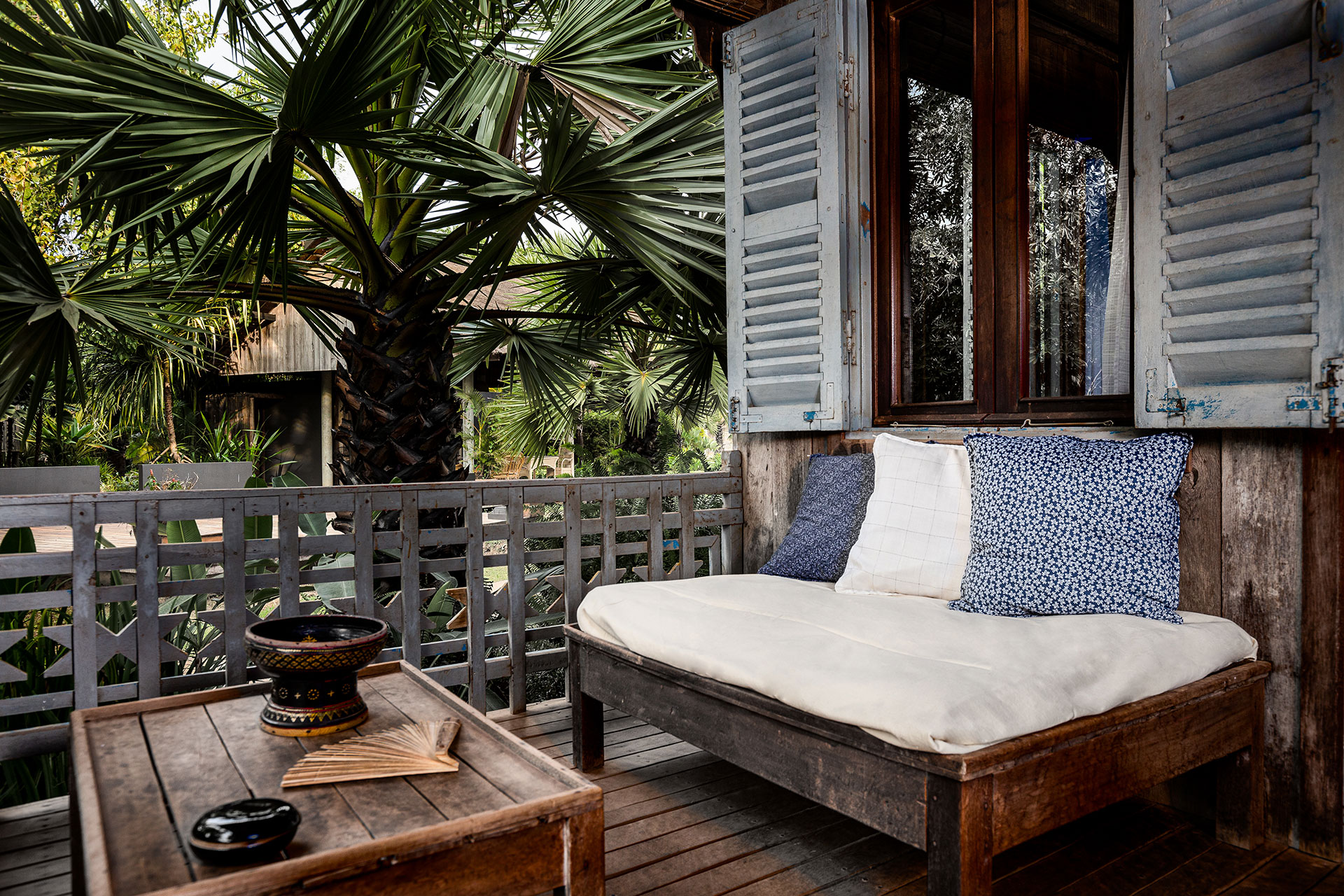 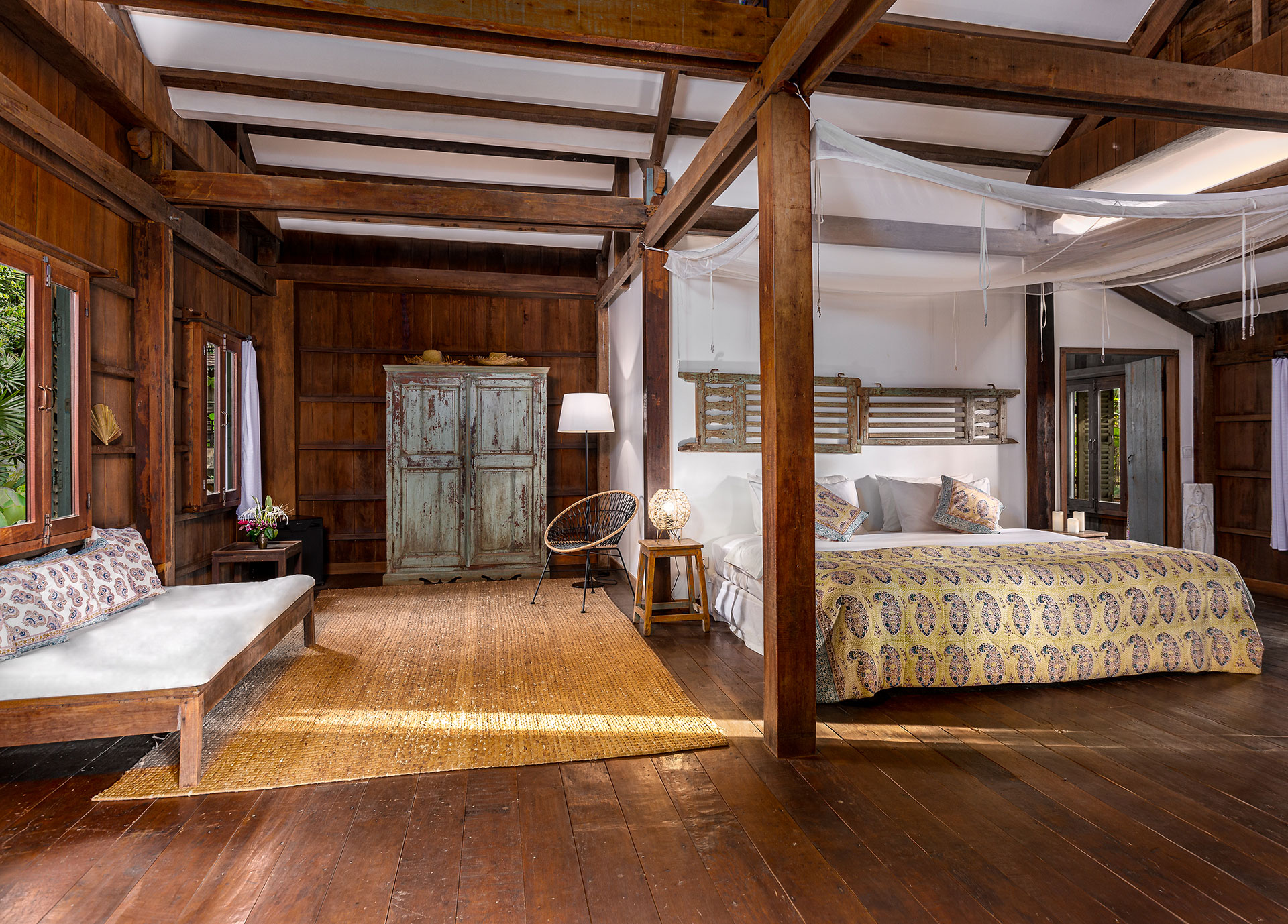 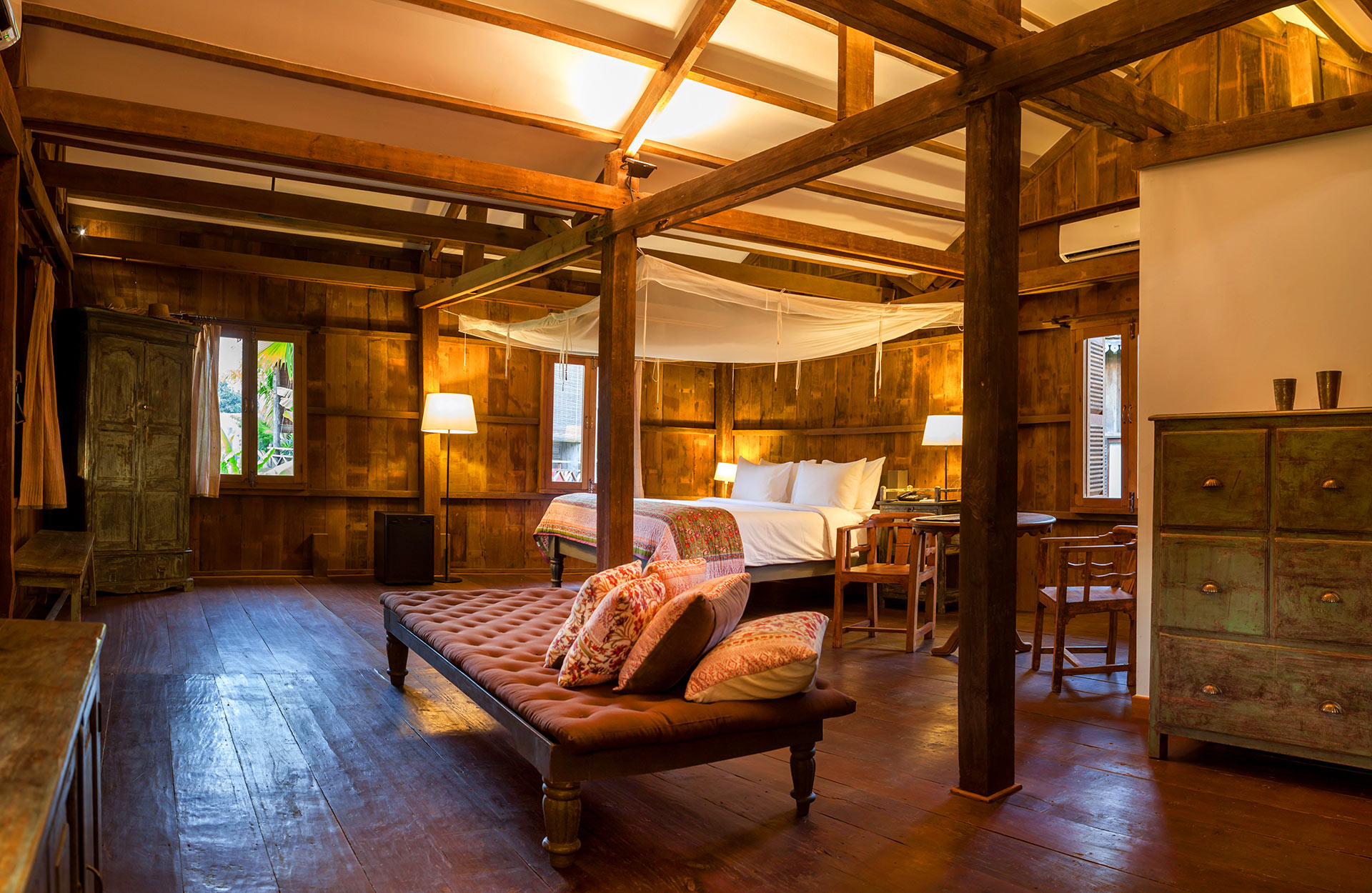 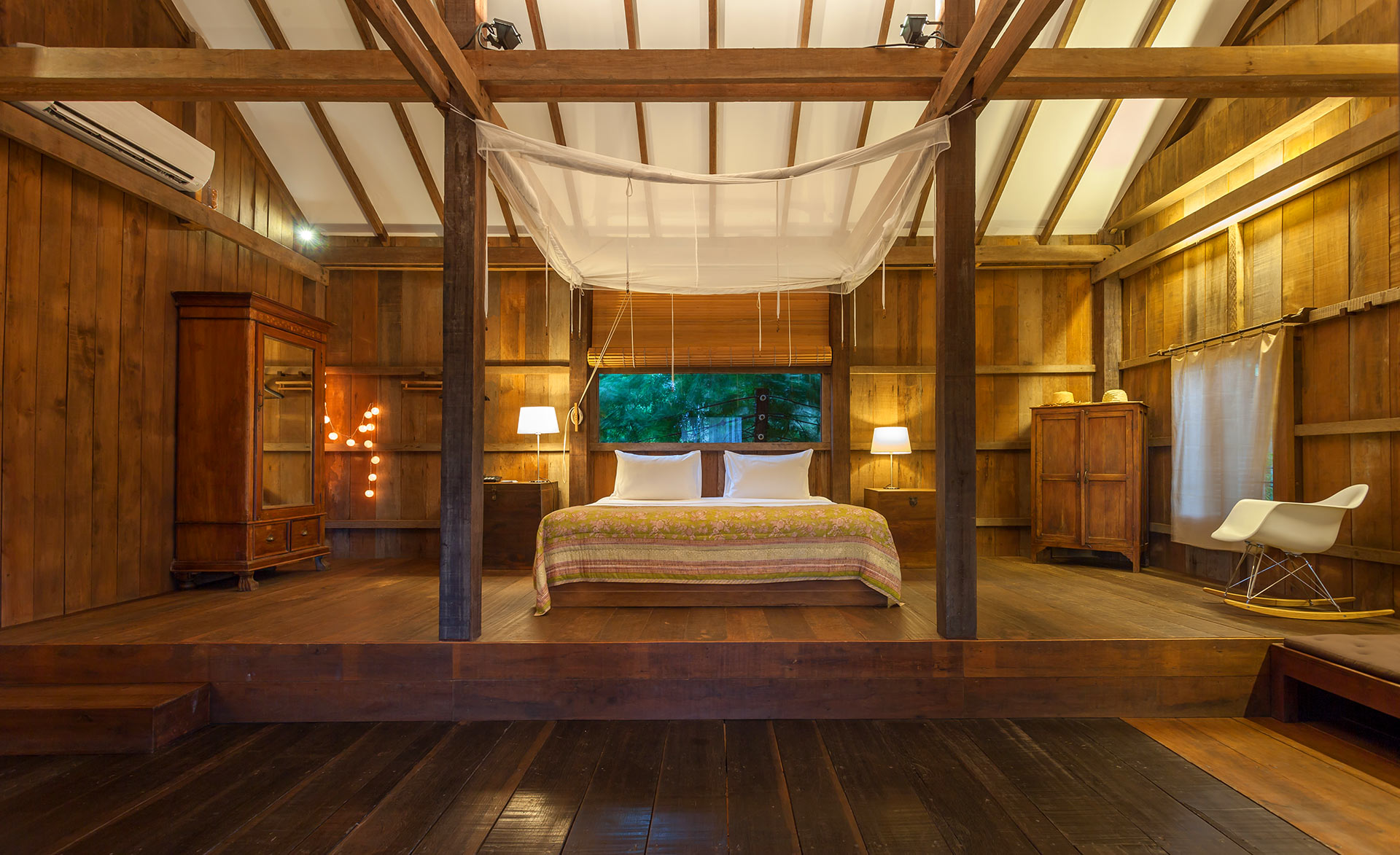 When Sala Lodges finally opened in 2013, the hotel owners invited all the former homeowners to the property. Only two came, and they didn’t stay over. Sala Lodges has a strong relationship with the surrounding community, hiring locally for staff, as well as from the two hospitality schools where both Lugeons teach. But when it comes to guests at the resort, Lugeon finds they’re mostly foreign. “Guests who were surrounded by houses like this [growing up], when they go to hotels, they don’t want to go to the place where their parents and grandparents were living,” he explains. “From their point of view, it’s bit of a bad memory. And especially in this country, which has such a horrific history.”

Indeed this is a country whose name still evokes the atrocities of the Khmer Rouge throughout the 1970s. And maybe it’s no coincidence that it was four Swiss hoteliers who were able to see the worth in its architecture despite that. Of all the inspirations for this place, Lugeon cited Ballenberg, Switzerland, as perhaps the original. An hour or so outside of Bern, it’s a town and open-air museum, constructed in the 1970s, that collected dismantled and reconstructed local architecture with the intention to preserve the traditions of the Swiss countryside.

It still draws 200,000 visitors a year, and remains an important source of employment for the area. Sala Lodges is the Cambodian corollary in miniature, translated directly into hospitality. It’s not just about the tradition of the houses, says Lugeon. “They feel like home.” 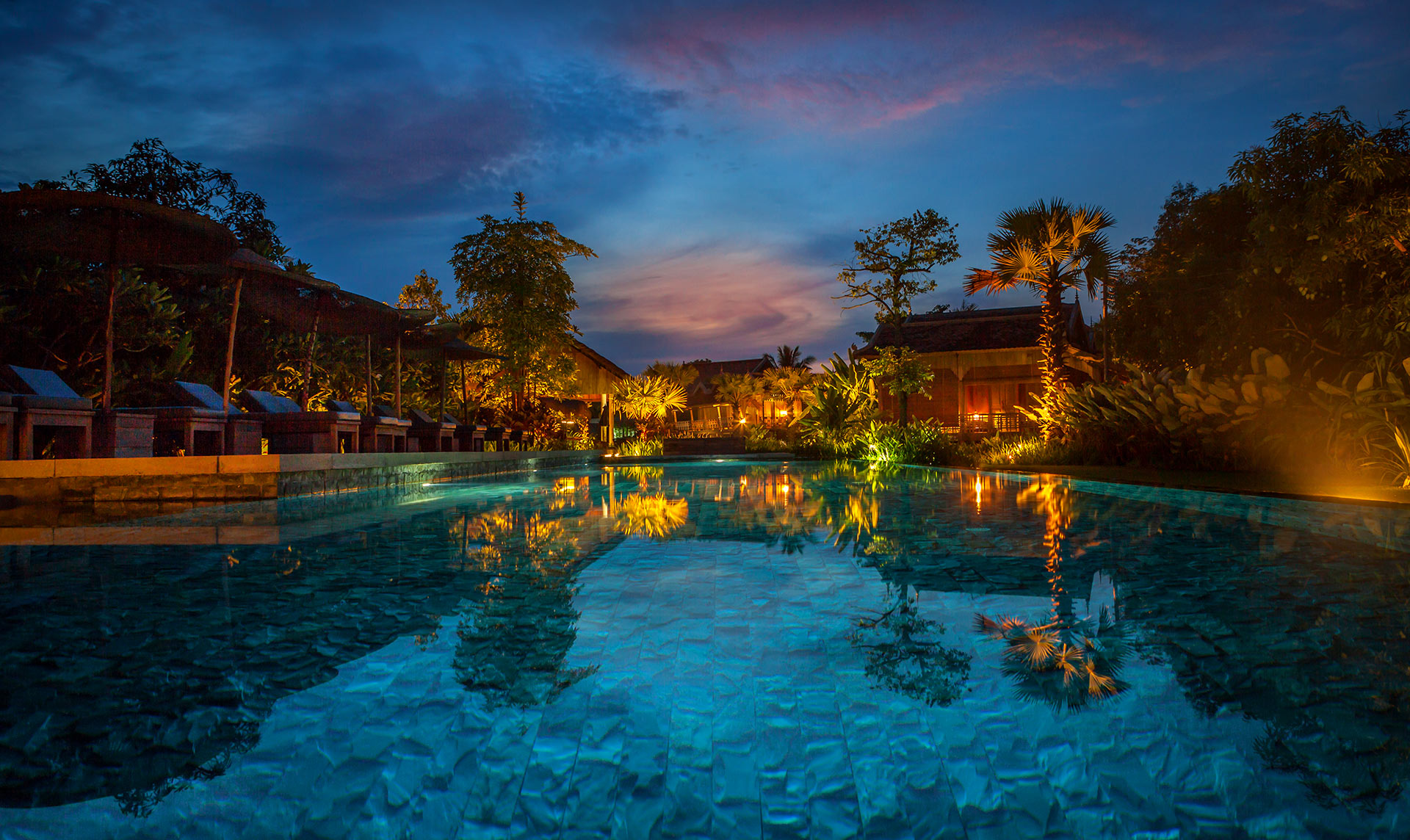