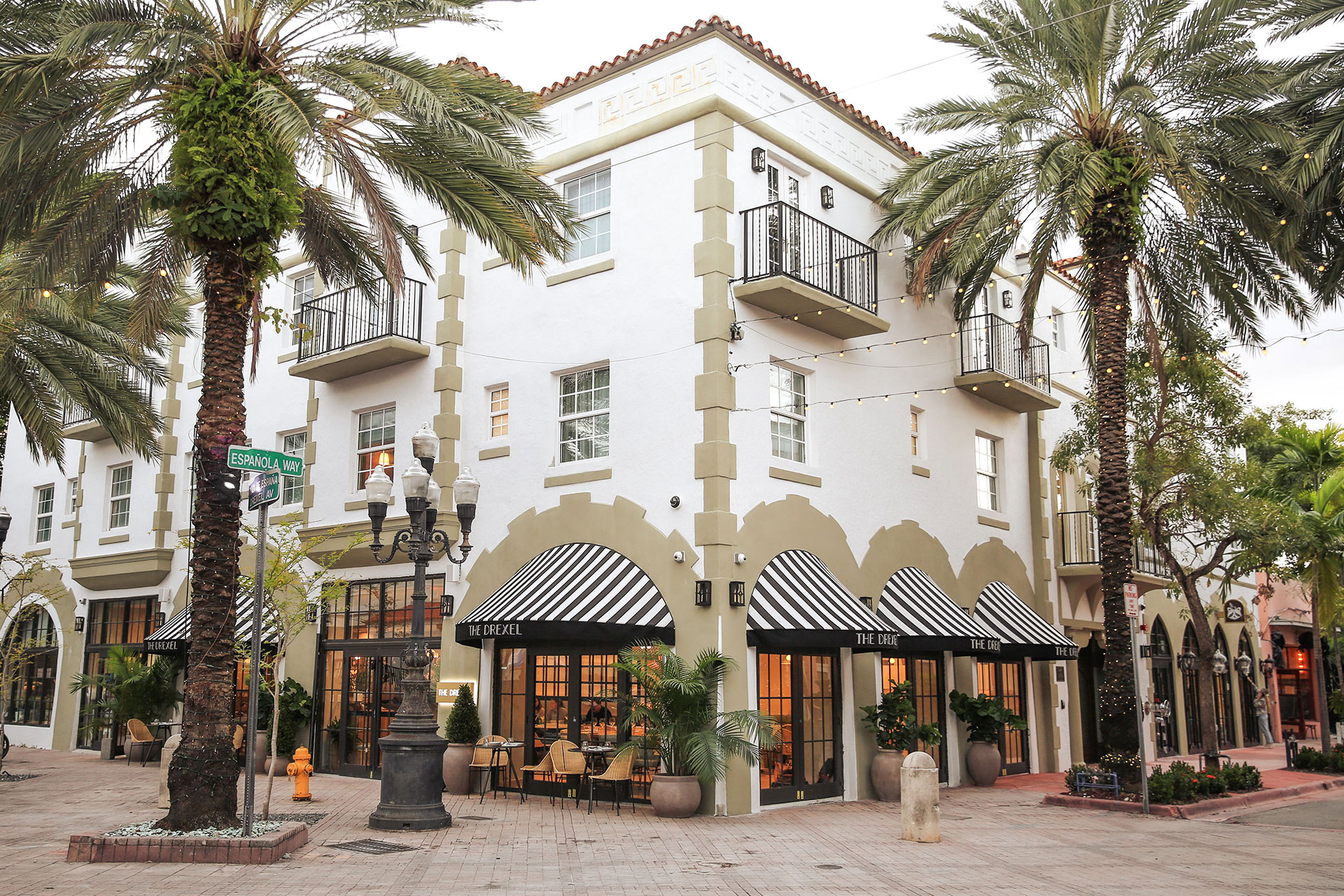 What’s old eventually becomes new again. And what’s originally thought of as a contrivance, given enough time to exist, will transform into the genuine article. Age and history bestow respect on a place, regardless of the motives that first brought it into being.

What brought Esmé Miami Beach into being was a project dreamed up in the 1920s by N.B.T. Roney, one of Miami Beach’s original city planners. Inspired by the spirit of Greenwich Village, he envisioned a series of buildings on Española Way that would serve as an enclave for the city’s artists. But instead of a village for creatives, he got Al Capone. And although the reputation of this historic pedestrian strip is no longer that of a seedy gangster’s hideaway, the local paper has described the street with a hint of caution. “Long a magnet for tourists,” wrote the Miami Herald in 2021, it’s a street that “has struggled to lure locals in the past.”

Time heals all wounds. So does a killer boutique hotel. Today, the village of Española Way is the 145-room Esmé Miami Beach. The size of this tiny town is modest, its tallest building only three floors, and its length about a block and a half. But its walls burst with restaurants and bars, hotspots that connect via intimate outdoor alleys. Here, they even have their own lexicon. The corridors are strictly paseos, narrow paths that yawn between white-washed walls and evoke winding European streets with nary a hint of mid-century kitsch.

Española Way was engineered to be a replica. 100 years later, it’s a bona fide piece of Miami’s cultural past.

As a hotel, Esmé is something completely different for Miami Beach — something much more subtle and harder to define than the types of accommodations the town is known for. It’s in its own world, hiding in plain sight. That might explain why it appealed to Al Capone, and why today it appeals to travelers less enamored with the gleaming glass towers and Art Deco stalwarts of the South Beach strip.

But what about those locals? 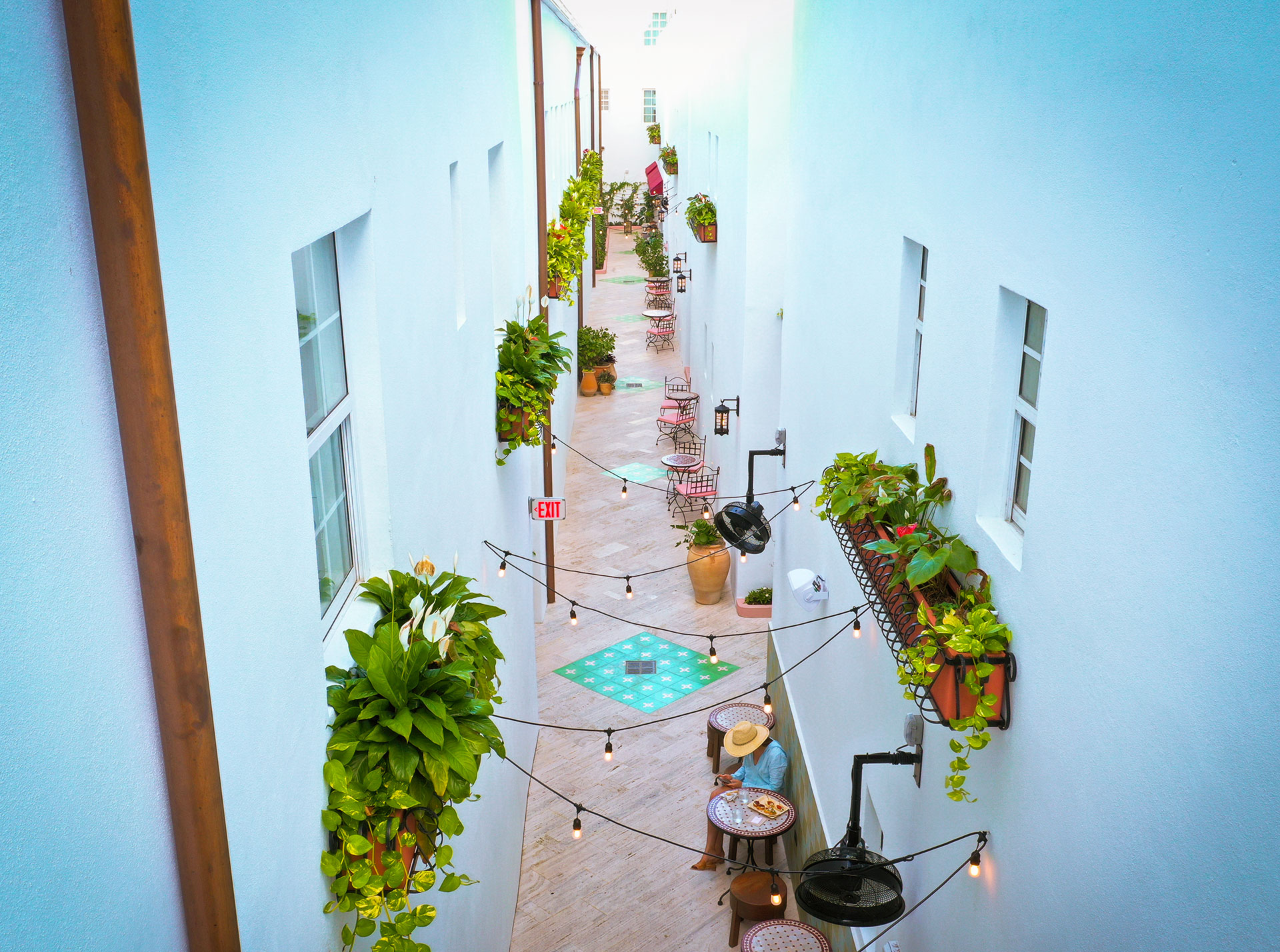 “I was a little wary about Española Way,” admitted Chris Hudnall, Miami local and the founder of the group behind El Salón, the moody cocktail bar that greets you on the east end of the hotel’s block. But, he continued, “I had no idea this was even back here.”

What’s back there — after five years and some $40 million — are the eight historic buildings of Esmé Miami Beach, renovated down to the studs. The paseo walkways in the “village,” more recently utilitarian spaces for restaurant staff, have been restored to the architect’s original design from nearly a century ago. Outfitted with café tables and picturesque nooks for al fresco dining, they connect guest rooms with spaces like the Basque-inspired “village pub” Bar Pintxo, the Mediterranean restaurant The Drexel, and the cocktail bar El Salón. Across the street, linked to the paseos via tunnel, is the standalone Casa Matanza — where it’s said Capone’s gambling syndicate once operated. Today, it hosts the Drexel and several suites. The Capone Suite might have a living room, but all guest rooms sport king beds, jewel tones, and mahogany furniture, a compliment to the variety of patterns, textures, tiles, and bold pops of color in the inspired public spaces.

Together, the effect is of a “hidden village behind our walls,” as Jessica LaRosa, general manager of Esmé, tells Tablet. A respite from — and within — the heart of Miami Beach. And it’s not that the hotel wants to stem the flow of tourism or change the city’s iconic reputation. But what they offer is perhaps a little more intimate, an effort to lure locals back to a street that’s long been written-off as a concession to visitors.

“We wanted to deliver a product that honored the history of Española Way and emphasized the charm of the area,” says LaRosa. But “it was also important to create a space for savvy travelers and the local community alike, [a space] that felt like an escape from the heavy tourism of the beach and Ocean Drive.” 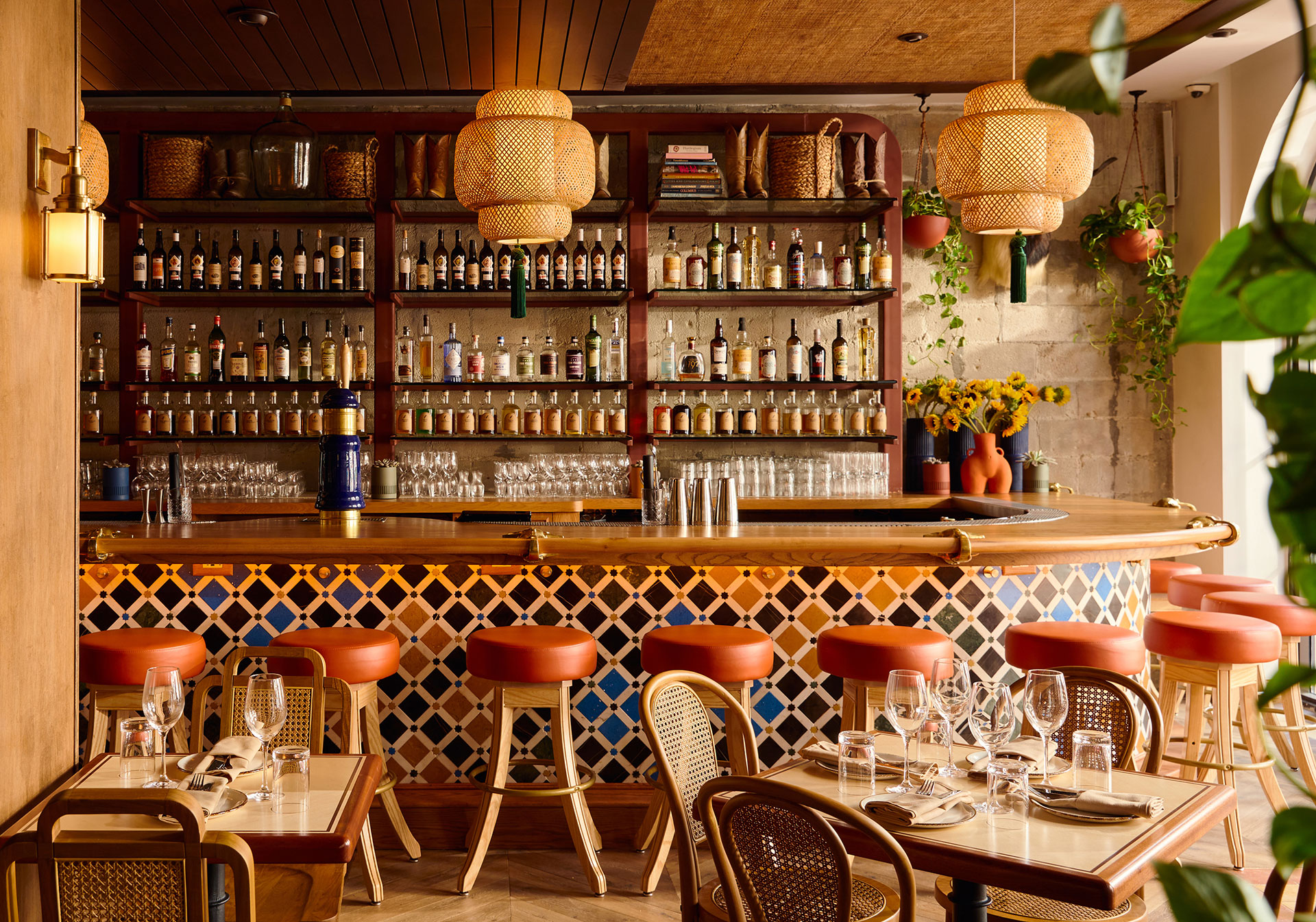 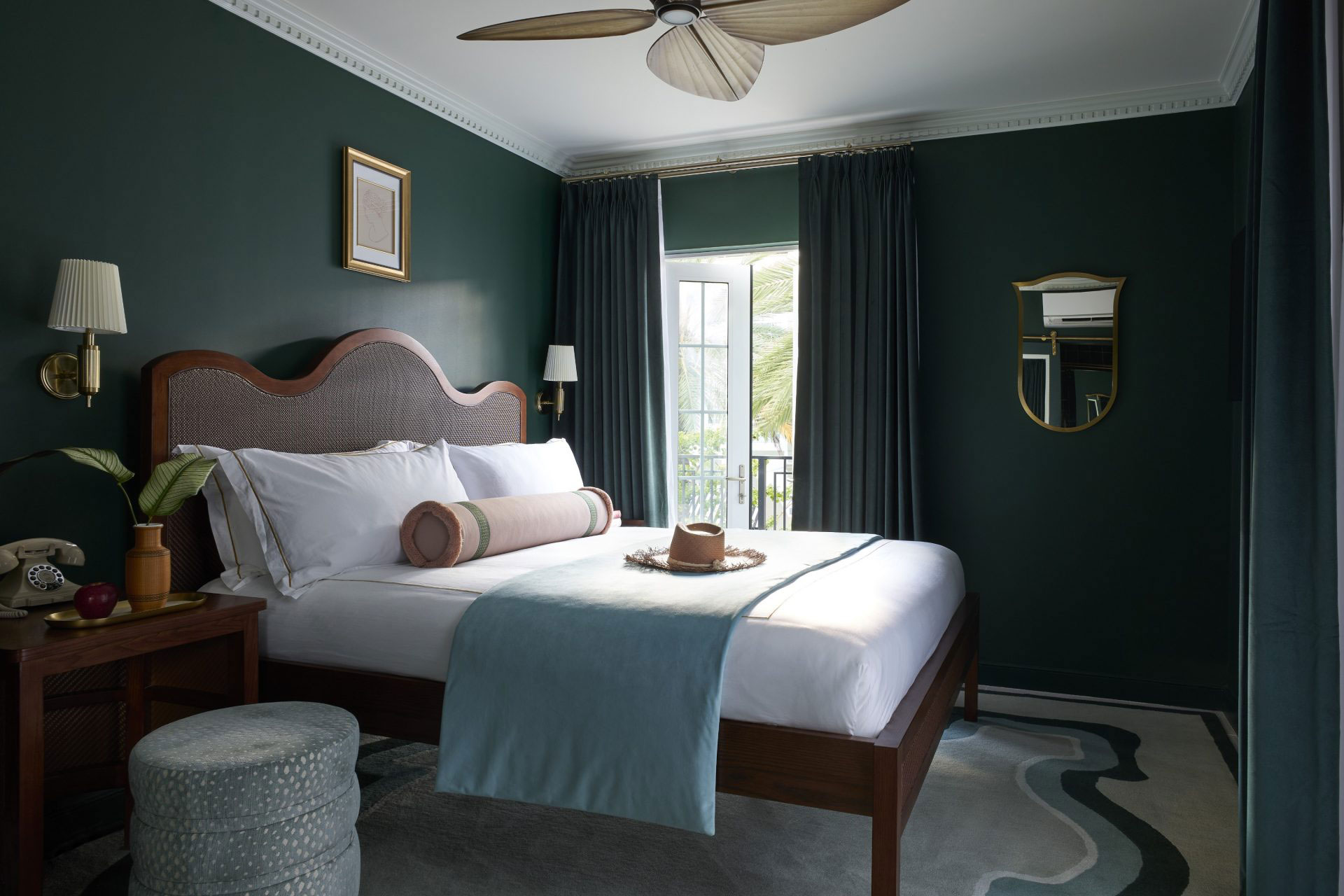 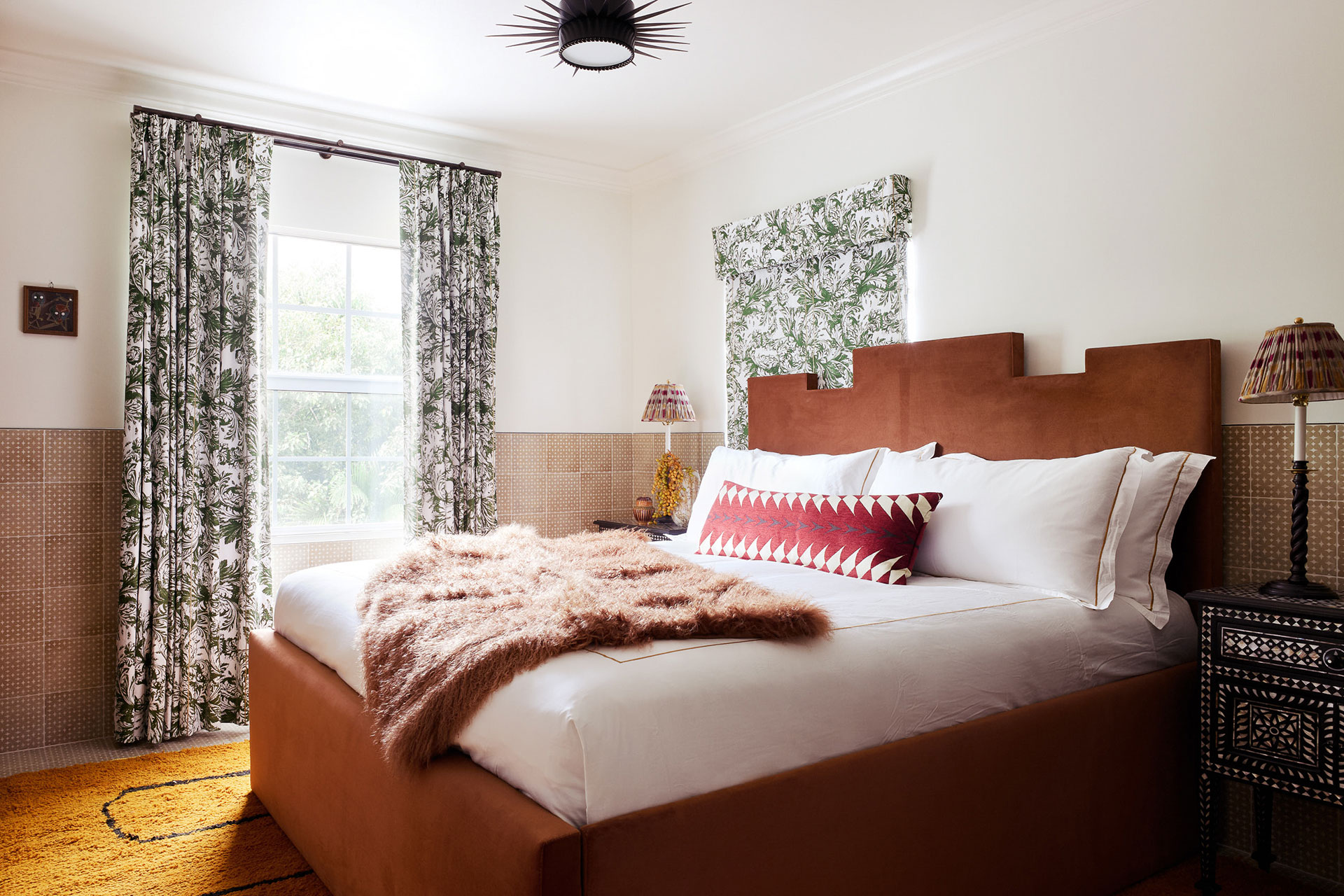 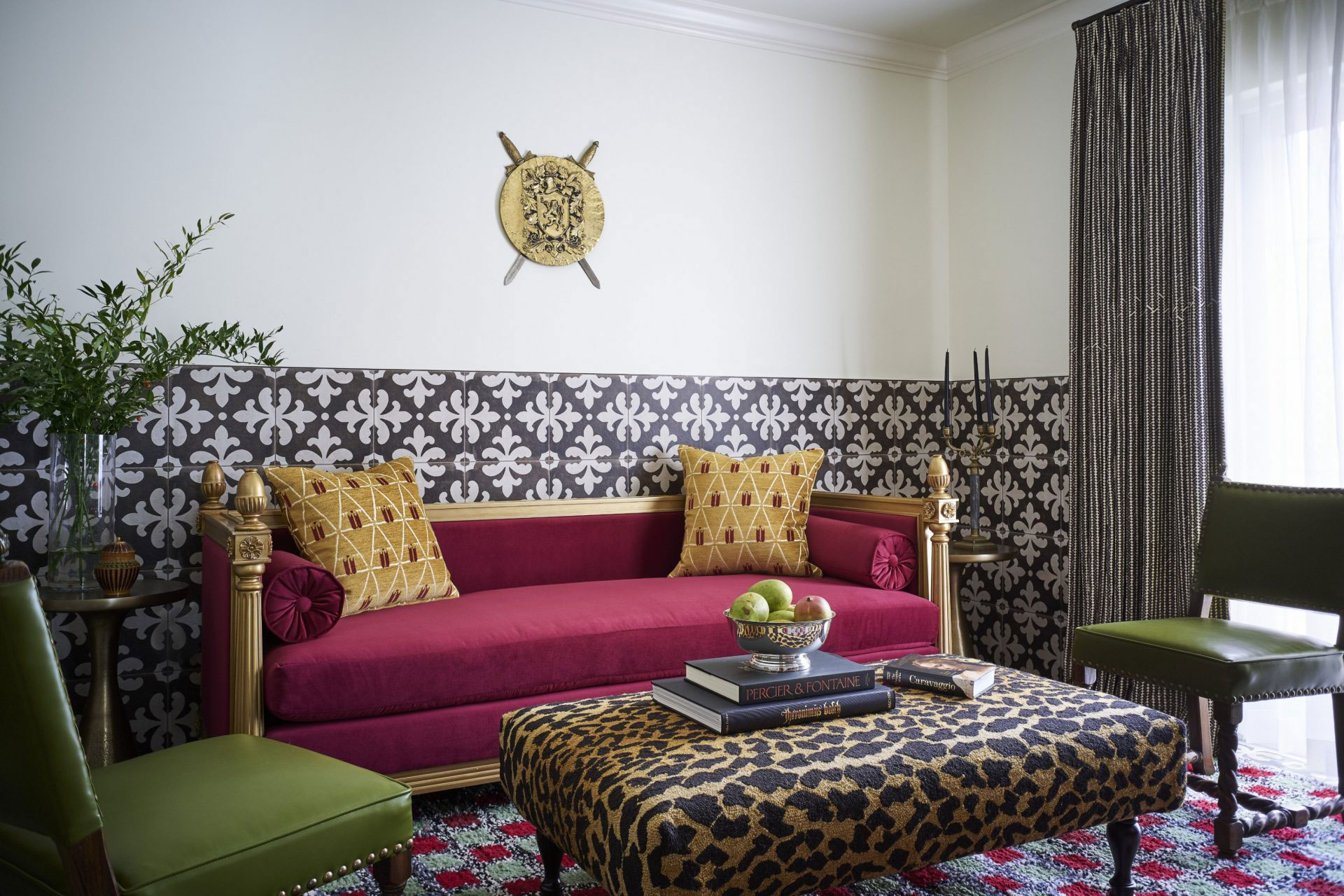 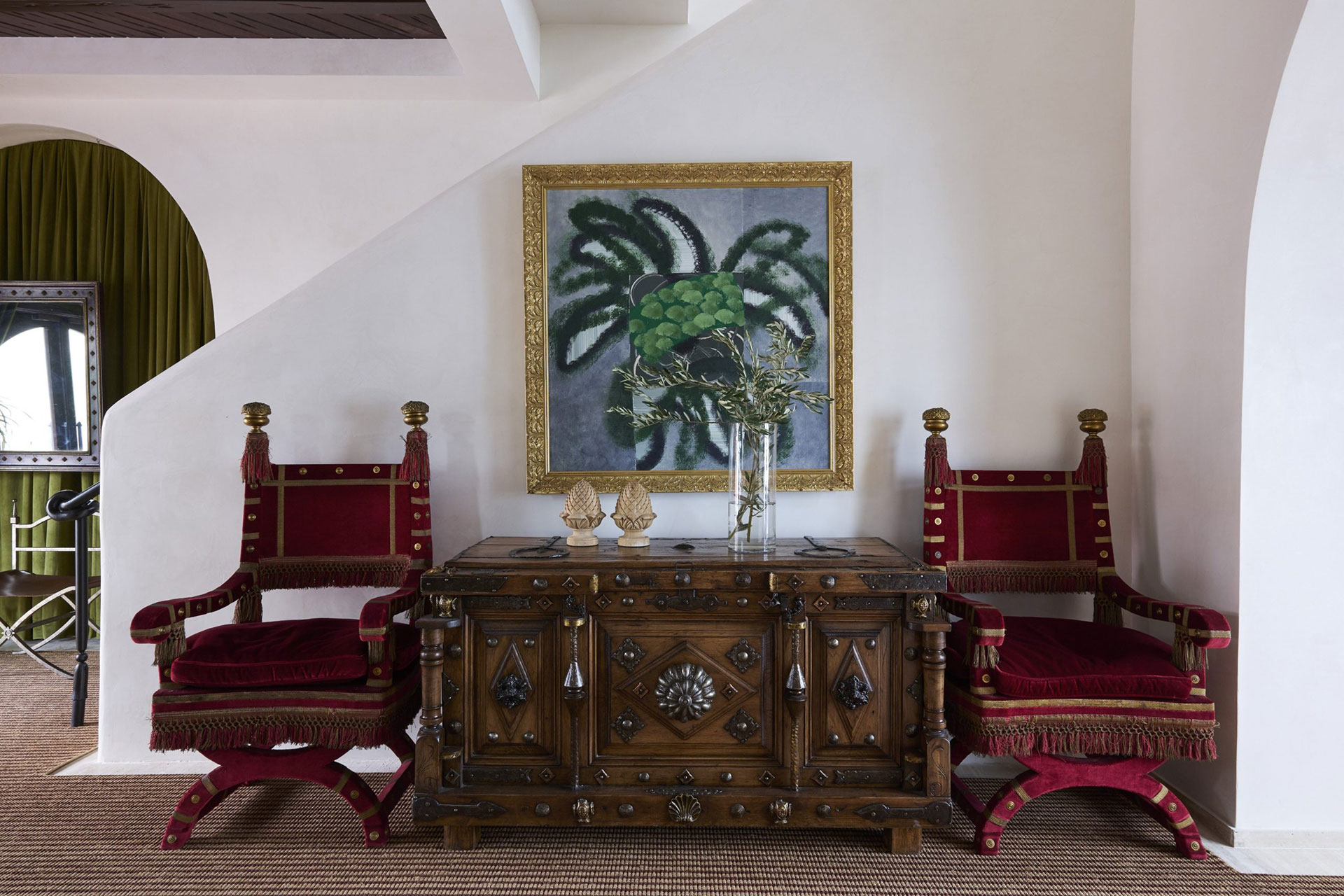 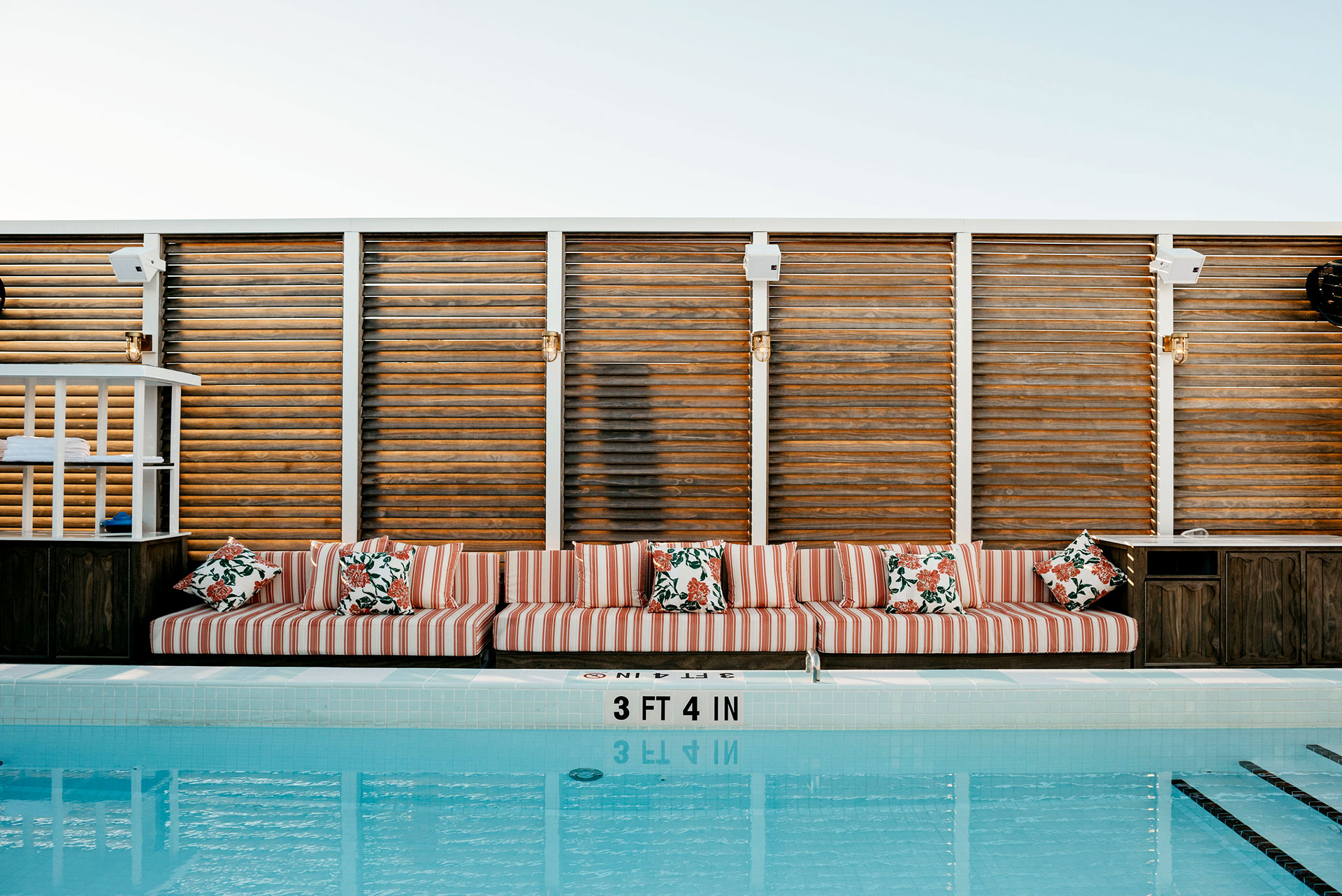 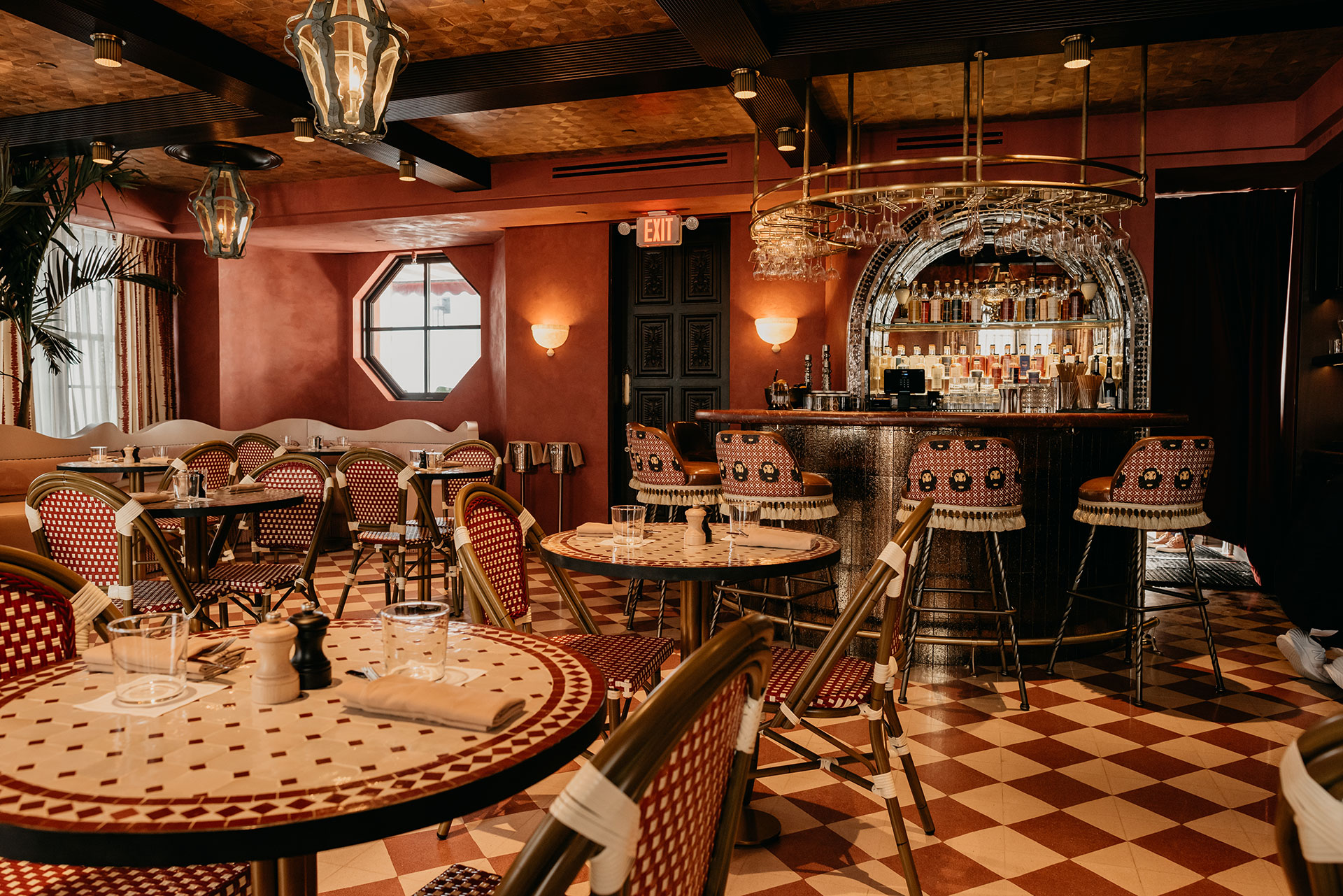 What remains to be seen is how easy it is to manufacture that kind of community. If you build it, will they come? You can see the challenge in the history of Española Way. The place is often described as a former artist’s colony, except for the minor detail that it never was. In a City of Miami Beach document discussing the preservation of the historic street, they note the excitement around the place in a 1925 Miami News article: “the Spanish Village of Miami Beach is destined to become a famous place among the artist and intellectuals of the nation”! And in the next sentence, the reality: “But artists and their associates never seemed to adopt the street, with its carnival atmosphere, as their own.”

Esmé Miami Beach opened in the midst of the pandemic, but early indications are that their vision has a better chance of realization. Locals have already raved about the feeling. El Salón is “dim and intimate… perfect for a date you’re trying to impress with your knowledge of cozy, secluded bars,” writes the Infatuation, who call it “a great place to hide from… tourists while sipping a very good martini.”

The unique aesthetics of Esmé — building on the original Spanish-Mediterranean architecture — speak for themselves, though a stay there doesn’t mean you’ll miss out on the more traditional Miami Beach vibe. Ascend to the rooftop and bridges have been added between buildings to create a large, cohesive space that fulfills every fantasy. Under the sun, poolside cabanas and a cushy lounge deck glitter, adjacent to the coconut-inspired lamps that light the sangria menu before the DJ set begins after dark.

But even that is meant to attract locals, with things like happy hours and live music meant to draw the community together.

The little village has more tenants on the way. Additional businesses are preparing to fill the remaining spaces, and LaRossa is confident that Infinity, Esmé’s parent company, is going to entice locals to come back. We expect she’s right. Esmé and Española are camp. They’re theater. They’re a celebration of Miami’s sociable spirit. And they imagine the city as N.B.T. Roney did all those years ago: as a place of culture and creativity. That appeals to everyone. 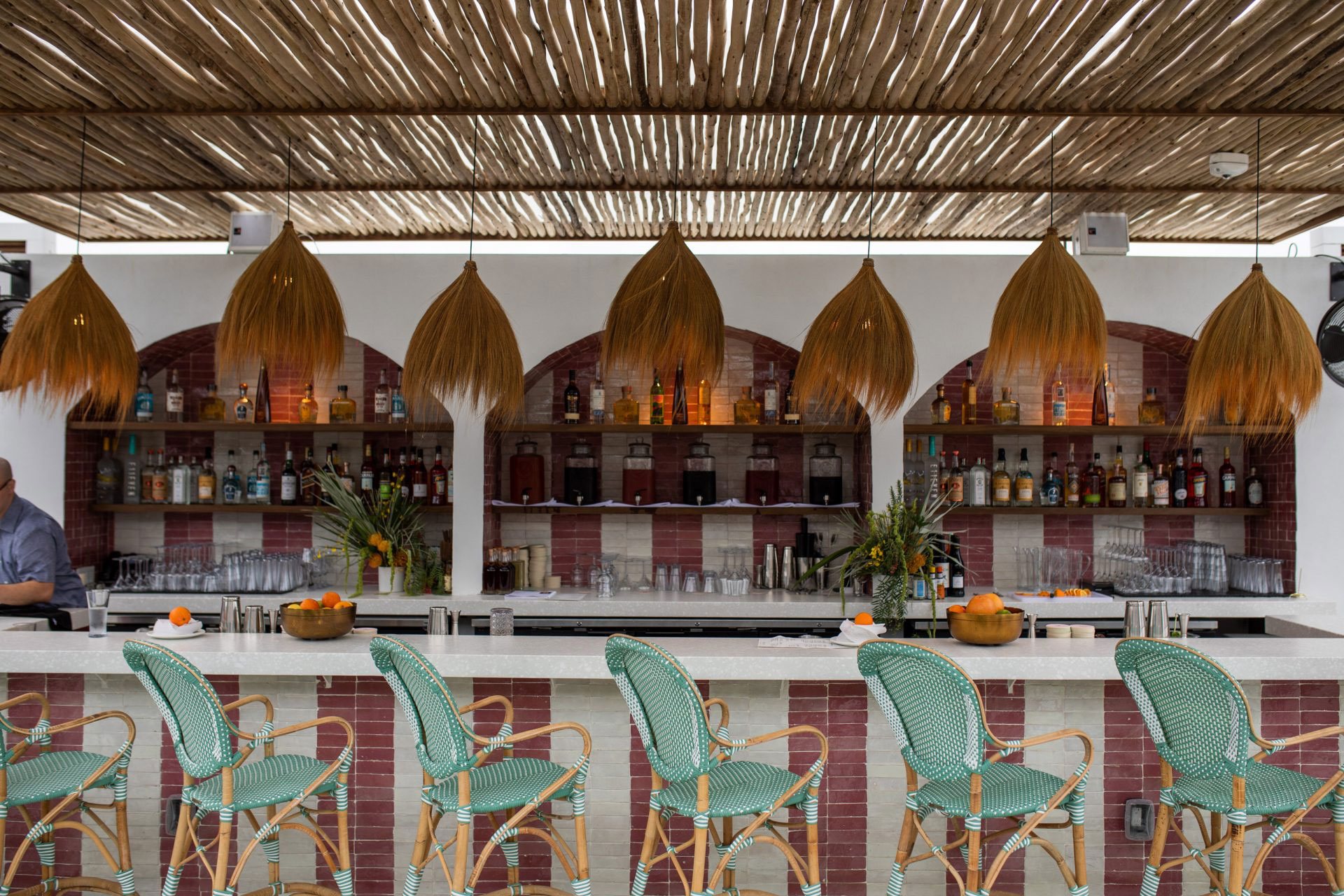