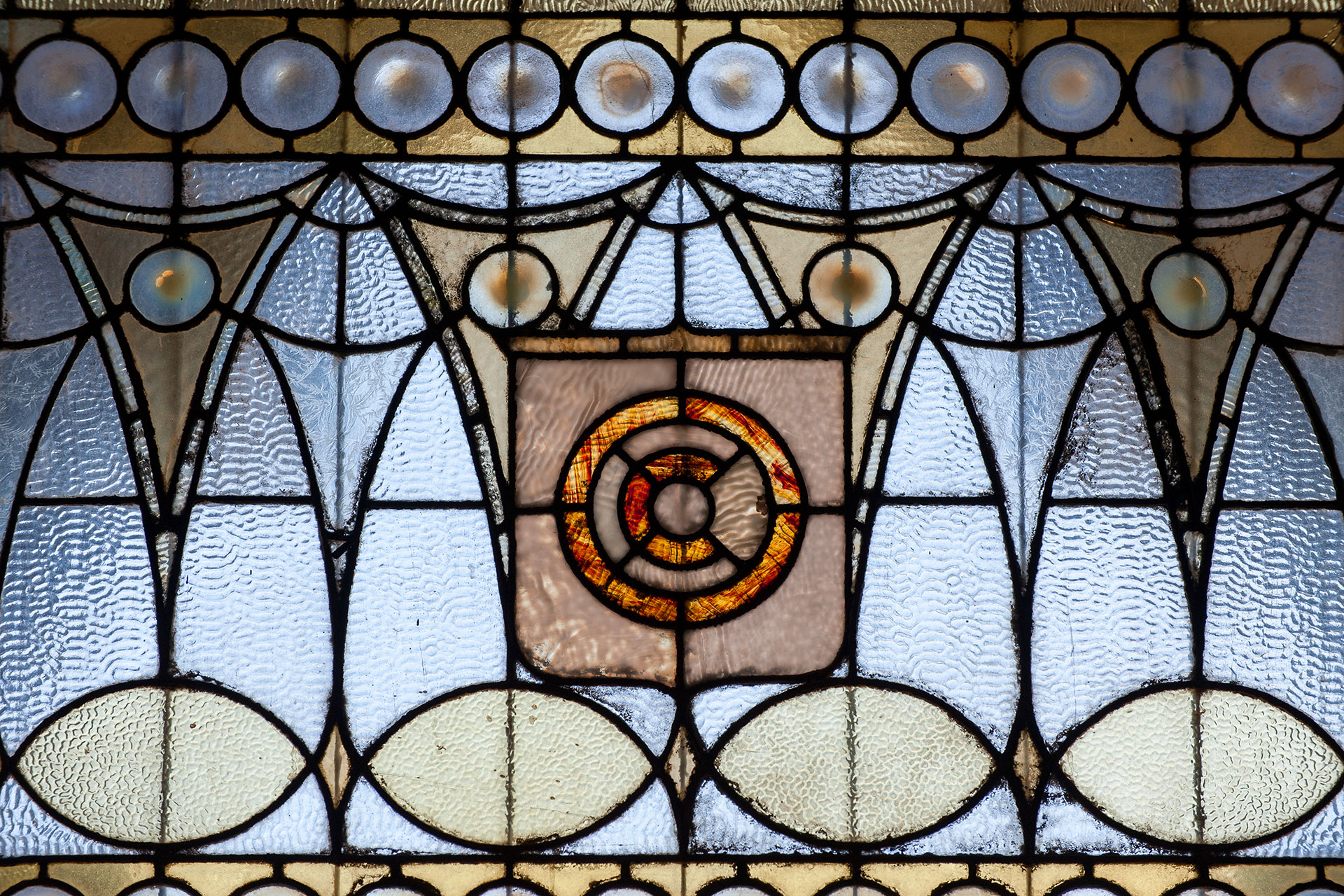 The Chicago Athletic Association has had an illustrious and sometimes sordid history that dates back to 1893, when it wasn’t quite a hotel. A lot has changed since then, but the ghosts of the past are never far away.

As the Chicago World’s Fair entertained millions in 1893, a man by the name of H.H. Holmes was supposedly luring revelers to his nearby hotel. Just three miles west of the famous expo, torture rooms on the building’s second floor included chutes down to acid vats, or so the story goes. It’s said that the investigation uncovered gas chambers and a dissection table, even a crematorium to dispose of bodies (after Holmes removed the skeletons and sold them to unknowing medical labs). The press later called it the “Murder Castle.”

The infamous hotel was immortalized in Erik Larson’s 2003 smash bestseller, The Devil in the White City.

This is not that hotel.

The Chicago Athletic Association opened in 1893, it too with an eye fixed on the World’s Fair. However, the intent of this stately building was to show the world that Chicago was more than just a meatpacking and crime town (much nobler goals than those of Mr. Holmes). On the outside, limestone columns and criss-crossed arches brought a European class to Michigan Avenue. Inside, the marble staircases and mosaic-tiled interiors were just as impressive. The only hitch was that hardly anyone was allowed in. 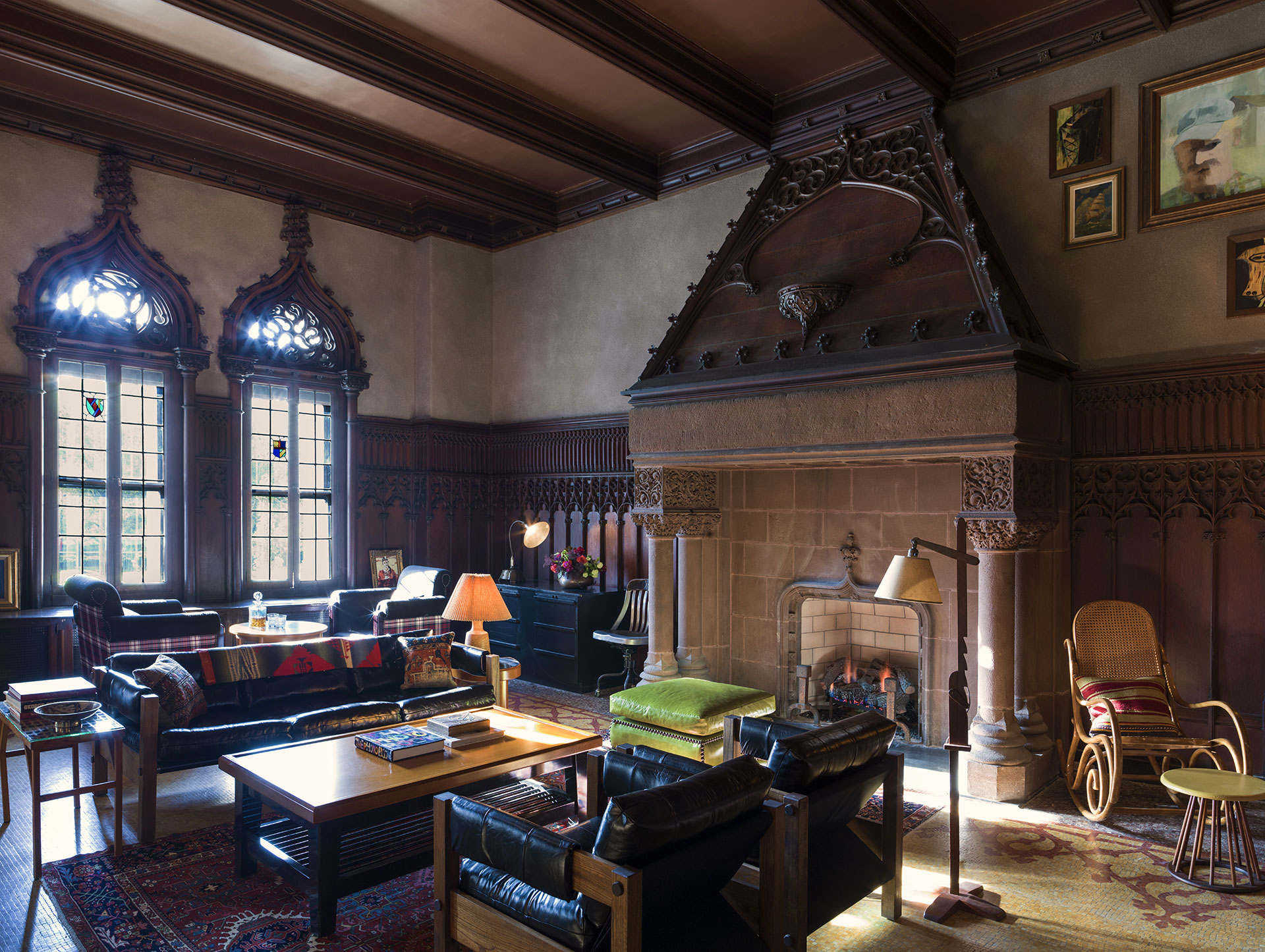 From 1893 to 2007, the Chicago Athletic Association was a private member’s club, right in the heart of downtown. The earliest members of this dark, opulent refuge spanned from quirky athletic royalty — the first pro football player or Olympian-turned-Tarzan actor Johnny Weismuller — to Chicago’s most iconic names. Field. Wrigley. McCormick. During prohibition, the iconic Venetian Gothic exterior would shield illicit saloons.

Today, sitting in the dimly lit, grandly columned drawing room dotted with bookshelves and fireplaces, an old-fashioned balanced on the armrest of a leather chair, it’s easy to imagine you’re back in those earliest days. With one radical distinction. What was for a hundred years the pinnacle of social exclusivity now wants everyone inside. After nearly a decade out of use, a heroic renovation reopened the CAA as a hotel in 2015, letting in a little more light (literally and figuratively) without sacrificing the original cloistered, clubby feel. It’s among the city’s most impressive and vibrant hotels, and home too to some of downtown’s favorite restaurants and bars. Designed specifically to appeal to everyone.

The facade and the public spaces now are as glamorous as the day it first opened. The club had closed in 2007, and a hundred years of ad hoc design decisions by club members had left it somewhat disjointed besides. New ownership recruited top Midwestern experts in marble and iron to pore over archival photos and original blueprints and restore the building to its roots. In the rooms, hotel designers Roman & Williams provided a decidedly more contemporary feel, with crisp spaces that reference the building’s sporting history via homages to turn of the century gymnasiums. Distinctive caged light fixtures hang from high ceilings. The criss-cross backs on the desks mimic old-timey stretching walls. Racquet leather wraps around the legs of the nightstands. 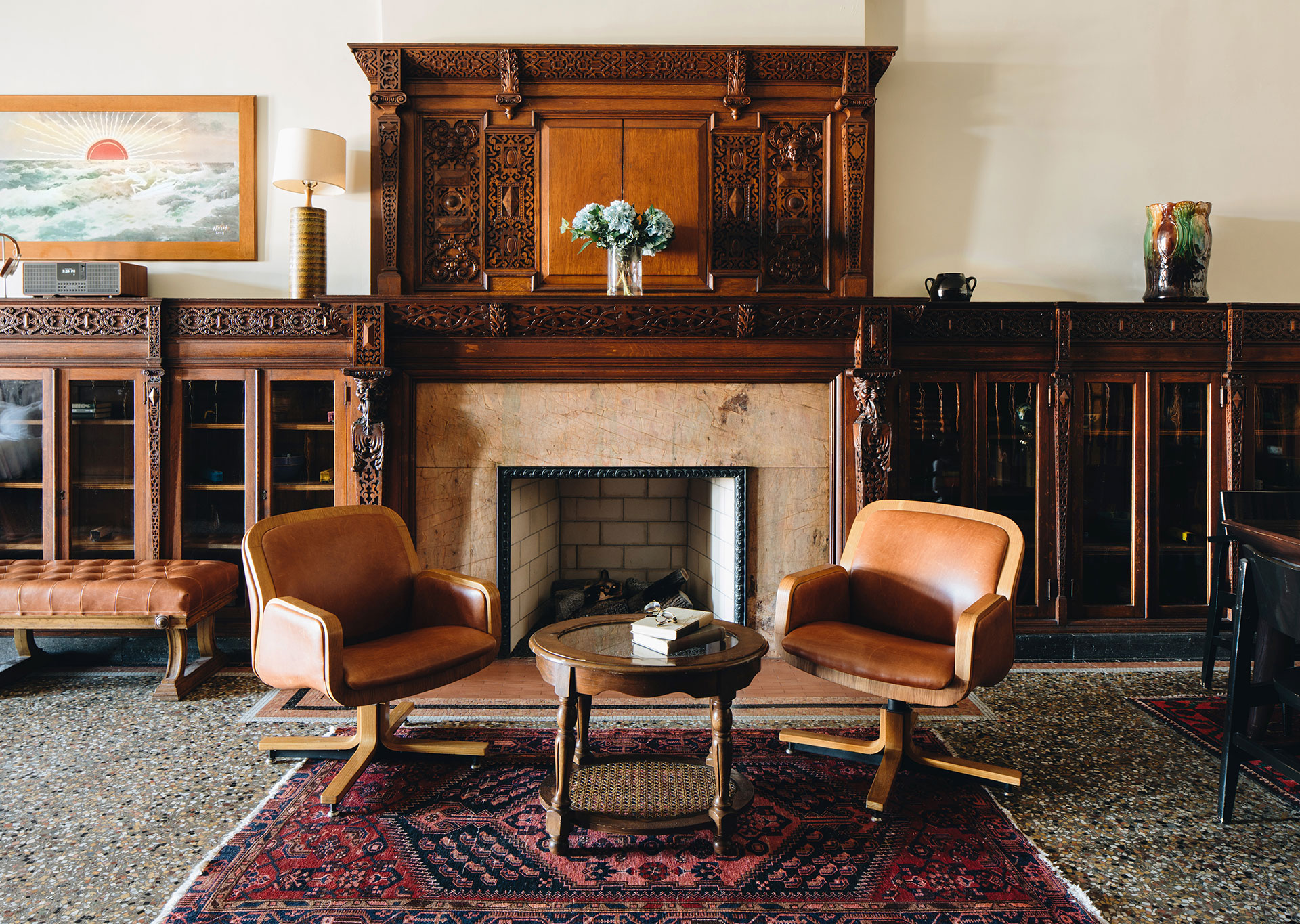 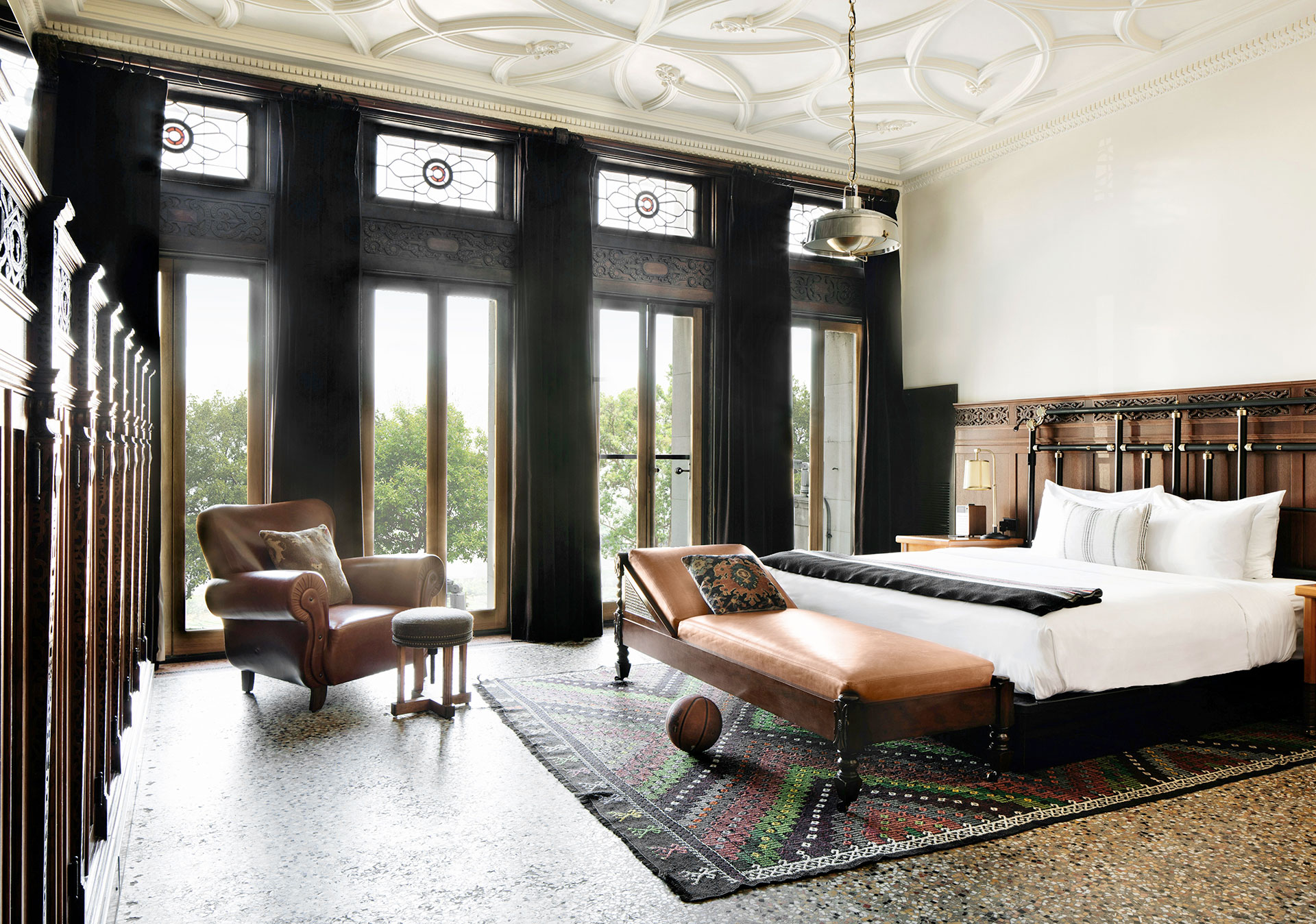 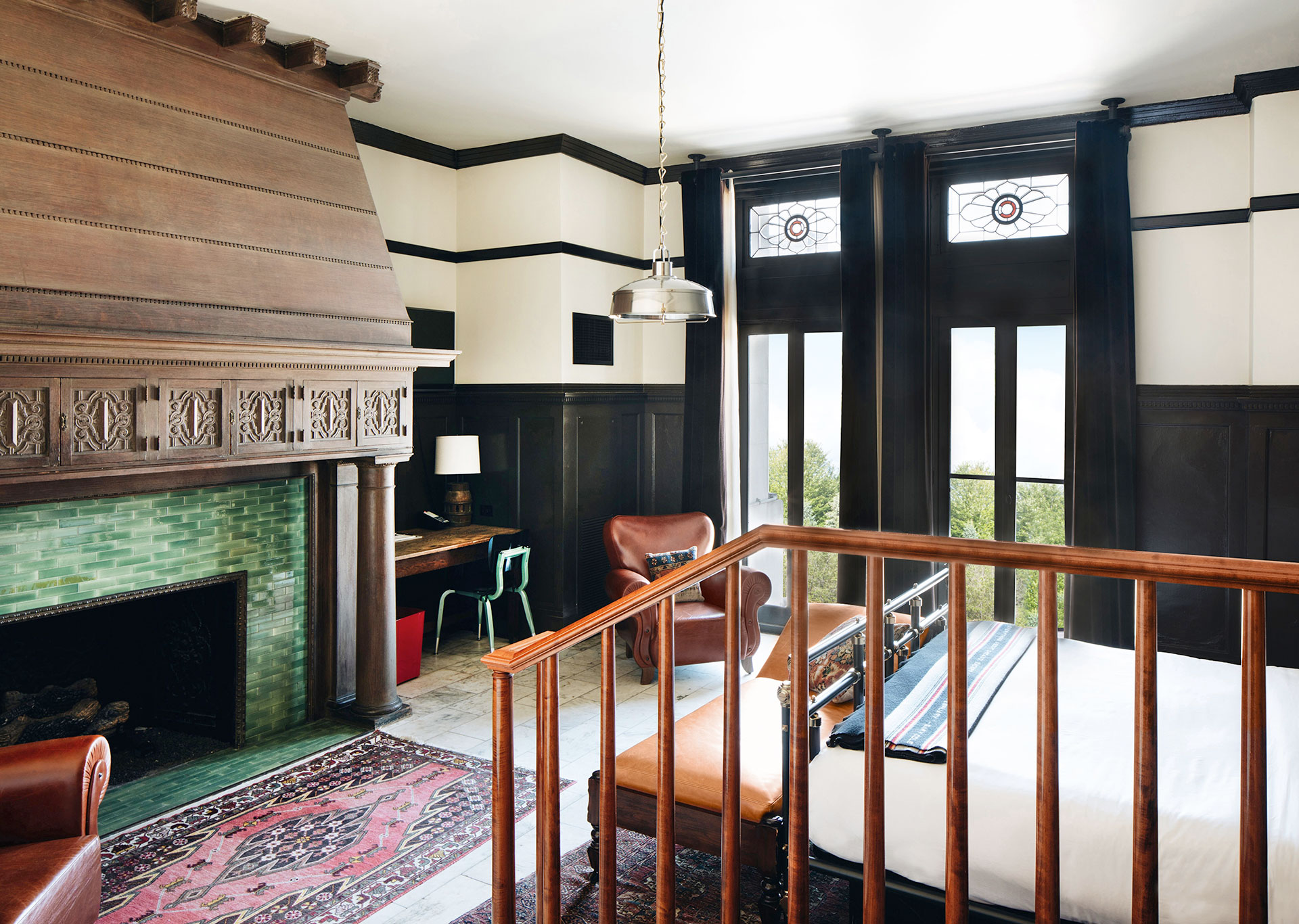 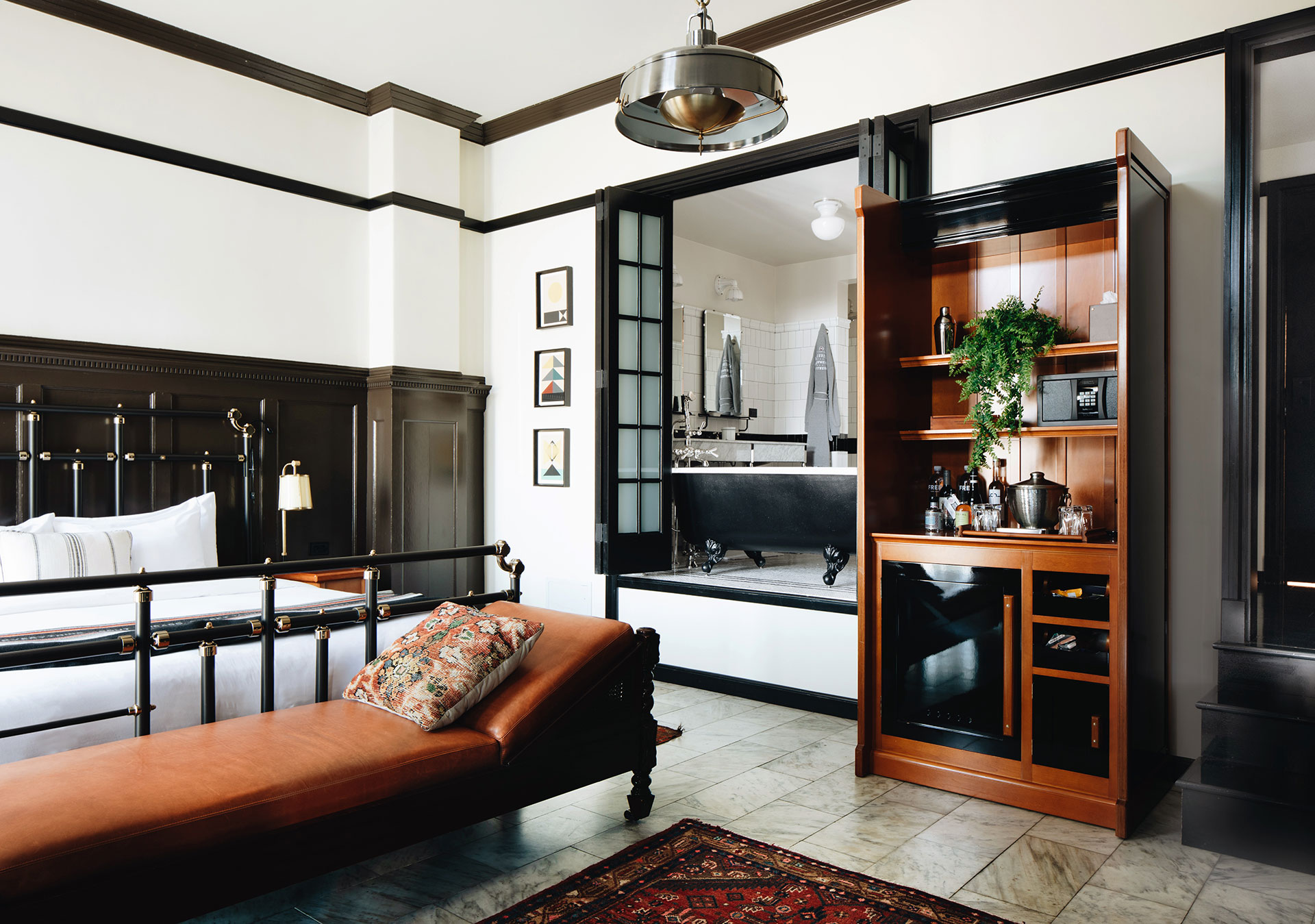 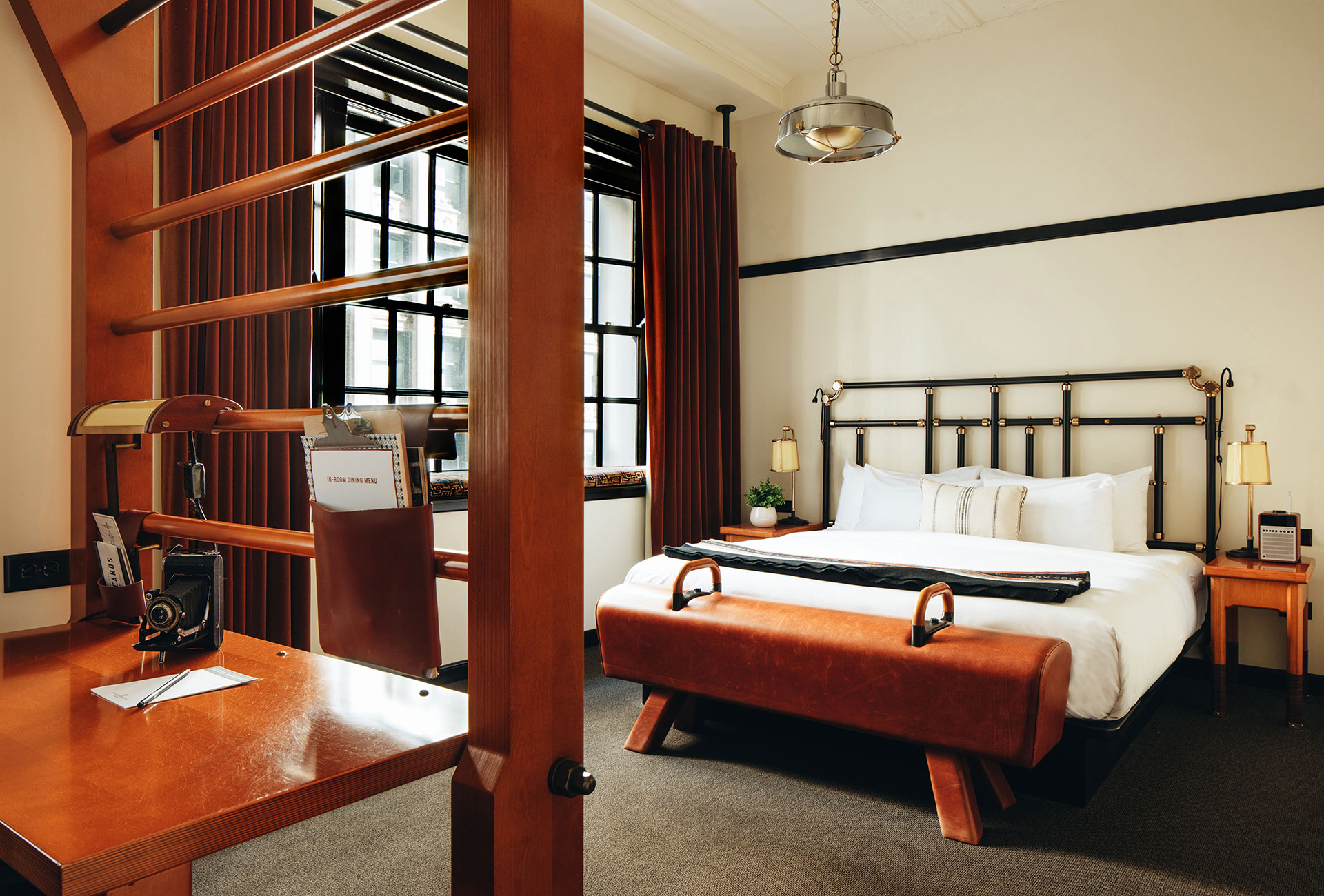 What’s the point of references like these — ones you might miss if you don’t look closely enough? You don’t need to know the history to feel it. Whether you’re conscious of it or not, all these little touches are Chicago. Ask general manager Patrick Hatton what kind of guests choose to stay at CAA and he tells you it’s simply people who “love the city… people who want to feel like they’re experiencing Chicago history while they’re in Chicago.” On your keycard is an image of Johnny Weismuller. In a glass display is an ode to William Wrigley — who, as a member when he bought the Cubs in 1915, adopted the CAA logo for the team. It’s a logo you see all over the hotel, and Cubs fans will instantly recognize the similarity.

They still don’t know everything that happened here, which was kind of the point. But clubs like the Chicago Athletic Association were the precursors to professional sports, where amateur club members faced those of other cities in serious competition. The first man to ever earn a paycheck for playing football — William “Pudge” Heffelfinger — once belonged to CAA. The Pittsburgh Athletic Club paid him as a ringer in their match against Allegheny.

Wholesome sporting and ambitious architecture notwithstanding, throughout the century the Chicago Athletic Association participated in its fair share of that enduring “crime town” reputation. During restoration, construction found a prohibition-era bar hidden behind the drywall. Now it’s the hotel’s popular microbar, the Milk Room, so named for the secretly spiked refreshments served in the speakeasies. Sit down and you might overhear a tour guide, stopping in the entrance to whisper to their group about Al Capone.

The Cherry Circle Room is the foodie location — and among the only public spaces in the building not restored based on the original architectural specs. Instead, it stands much as it did at midcentury, when the men of the club walled in its windows and installed soundproof booths to go with a discreet entrance leading up from the street. “I’ll let you do the math on who they might have been entertaining,” comments Hatton. On the roof, the modern restaurant Cindy’s is the only brand-new space in the building, and it’s where you’ll find one of the best views in the city, a soaring look at Millennium Park stretching out to the lake. Reservations are essentially mandatory for the above, but the Shake Shack and coffee shop on the first floor offer more affordable, available options. The Game Room, by the drawing room that sees work-from-home warriors posted up with their laptops, draws flocks of after-work professionals to its shuffleboard and foosball tables. 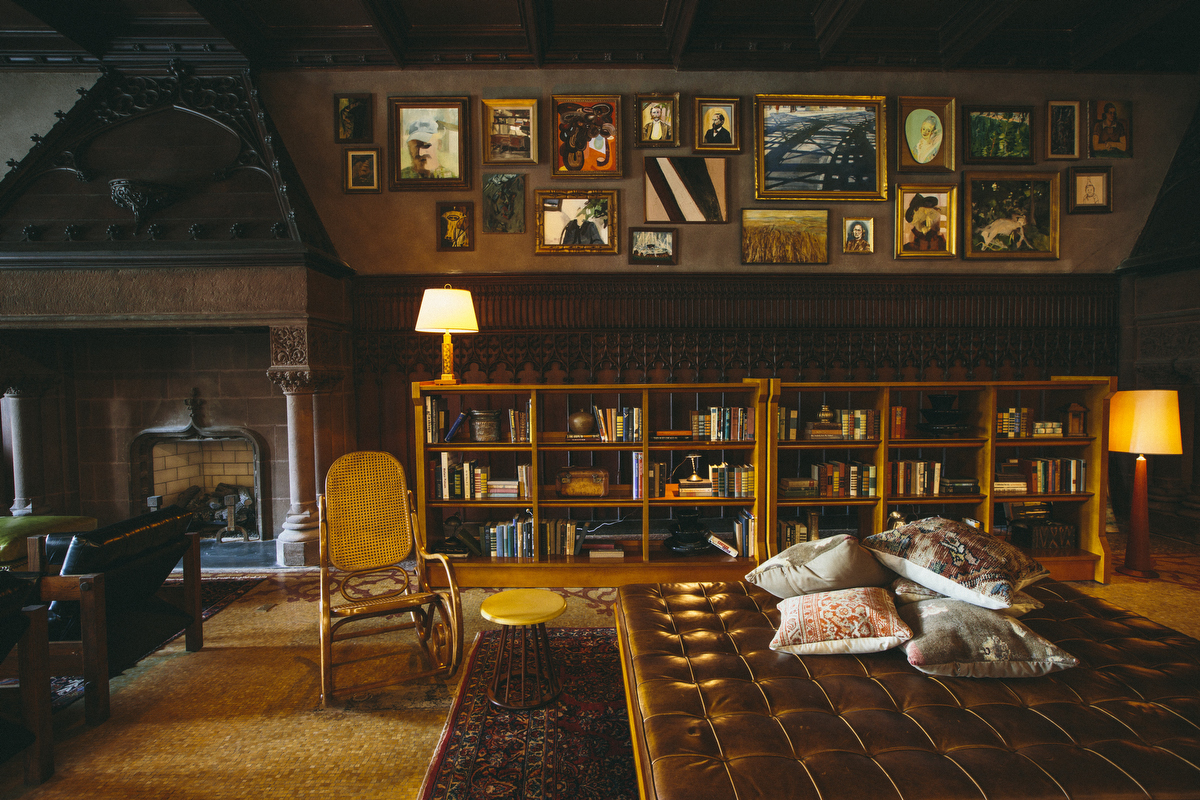 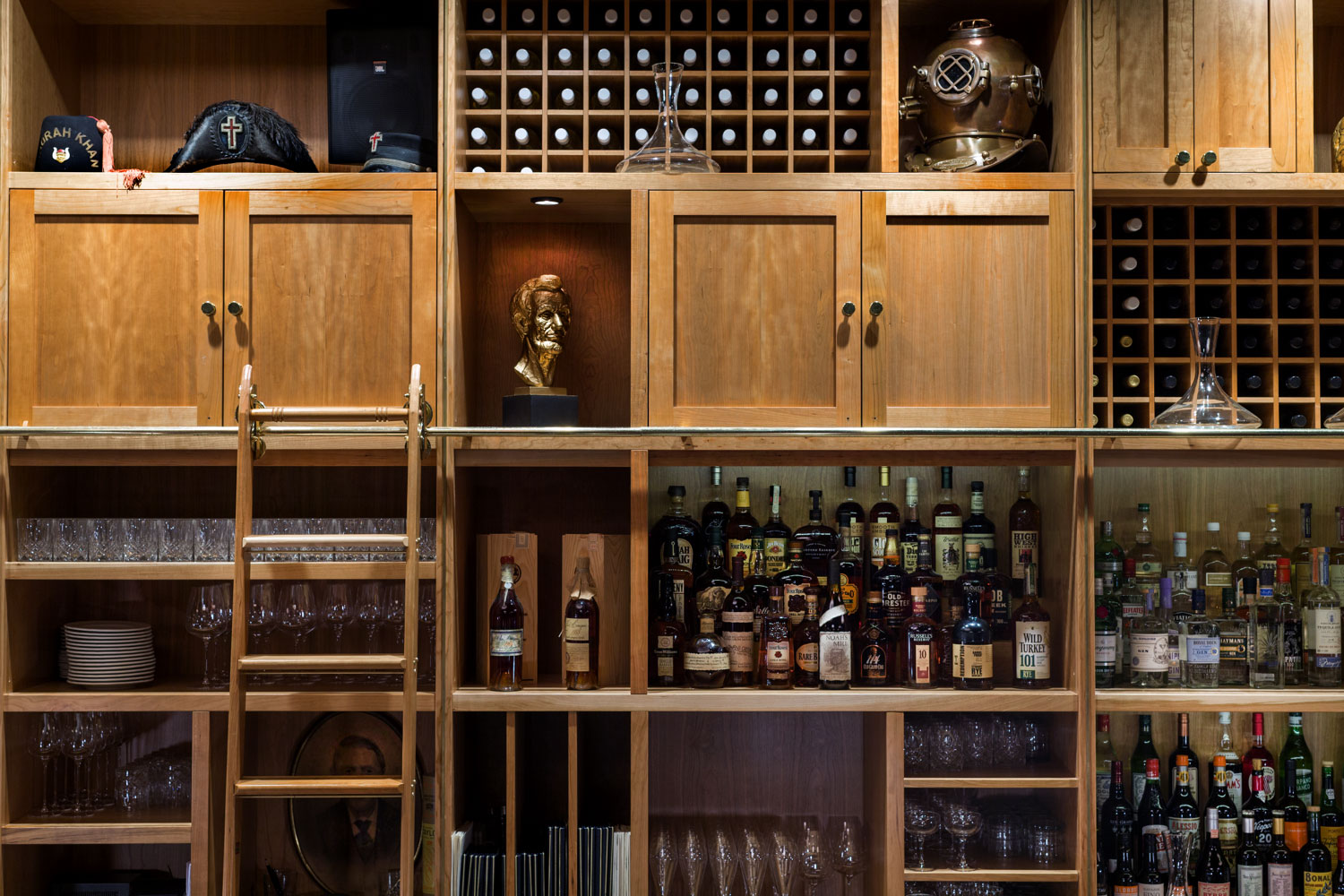 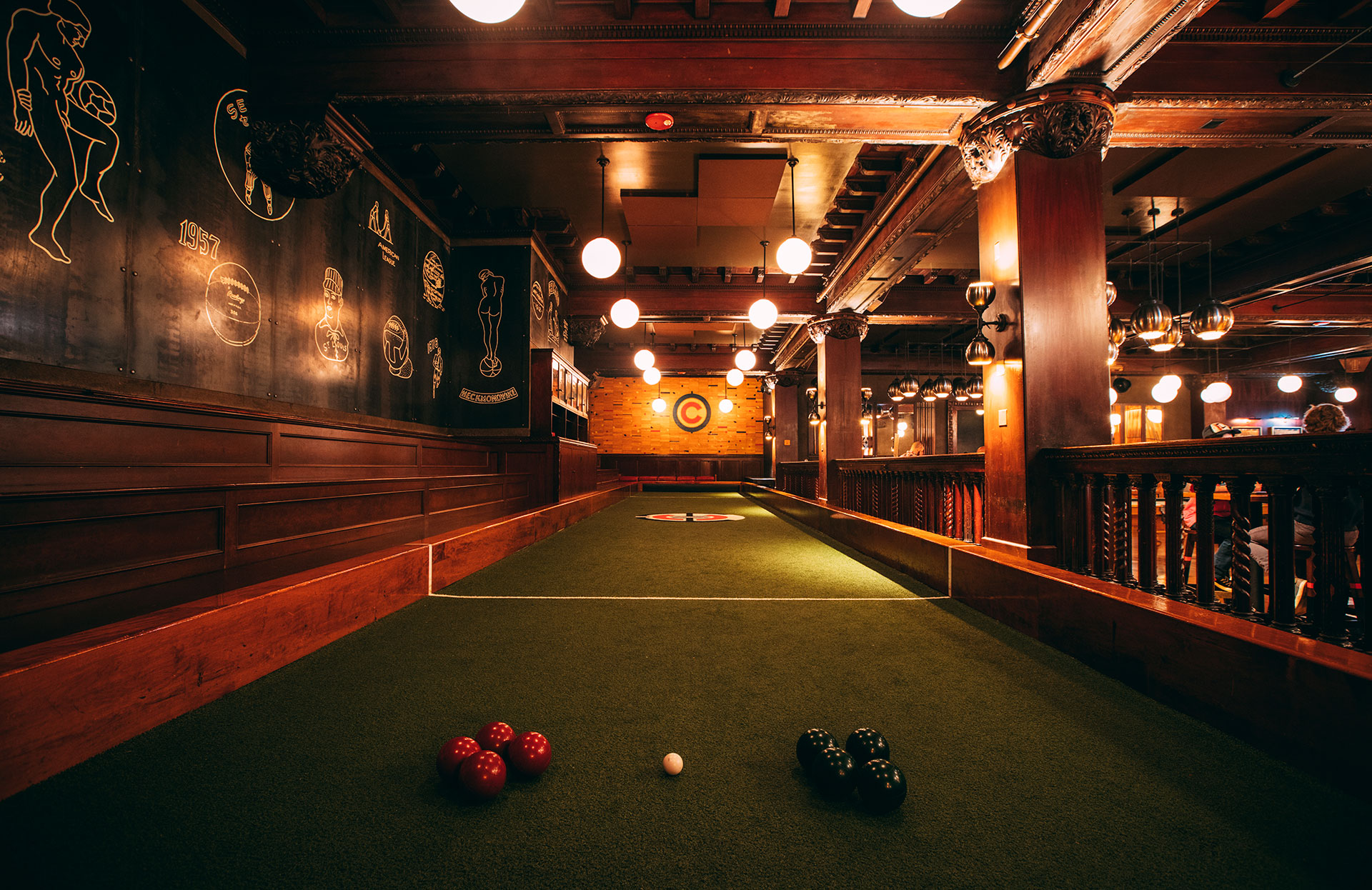 Rooms and suites retain the stately feel of the drawing room, but the Roman & Williams design ensures they don’t feel quite as old-fashioned. Sixteen rooms, like the popular Millennium Junior Suites, face the park, drenched in sun. Suites are spacious with living areas, and the “Holy Cow” suites display a multiple-room grandiosity worthy of the Harry Caray catchphrase. The other two hundred or so, spread between the Michigan Ave building and the Madison Street annex, are downtown rooms, with views typical of city hotels making the most of their space. But despite the clever references by Roman and Williams, and the branded bathrobes that make you feel like a 19th-century boxer, this place isn’t really about the rooms.

“It was so exclusive before. Now it’s one hundred percent inclusive.” Even if you don’t get a room. “There’s so much for you to do in the rest of the hotel,” as Hatton puts it. “Come hang out with us.” 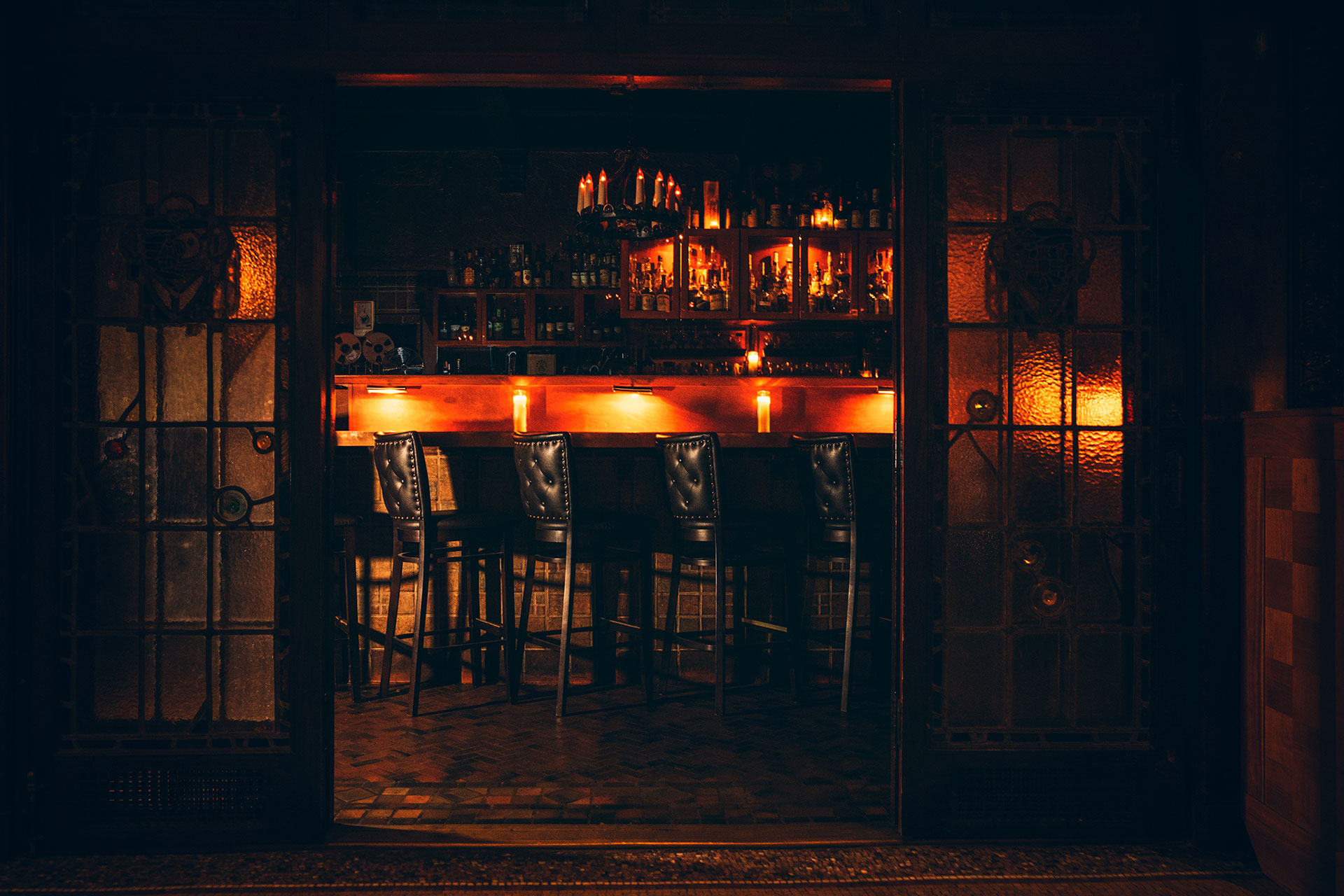