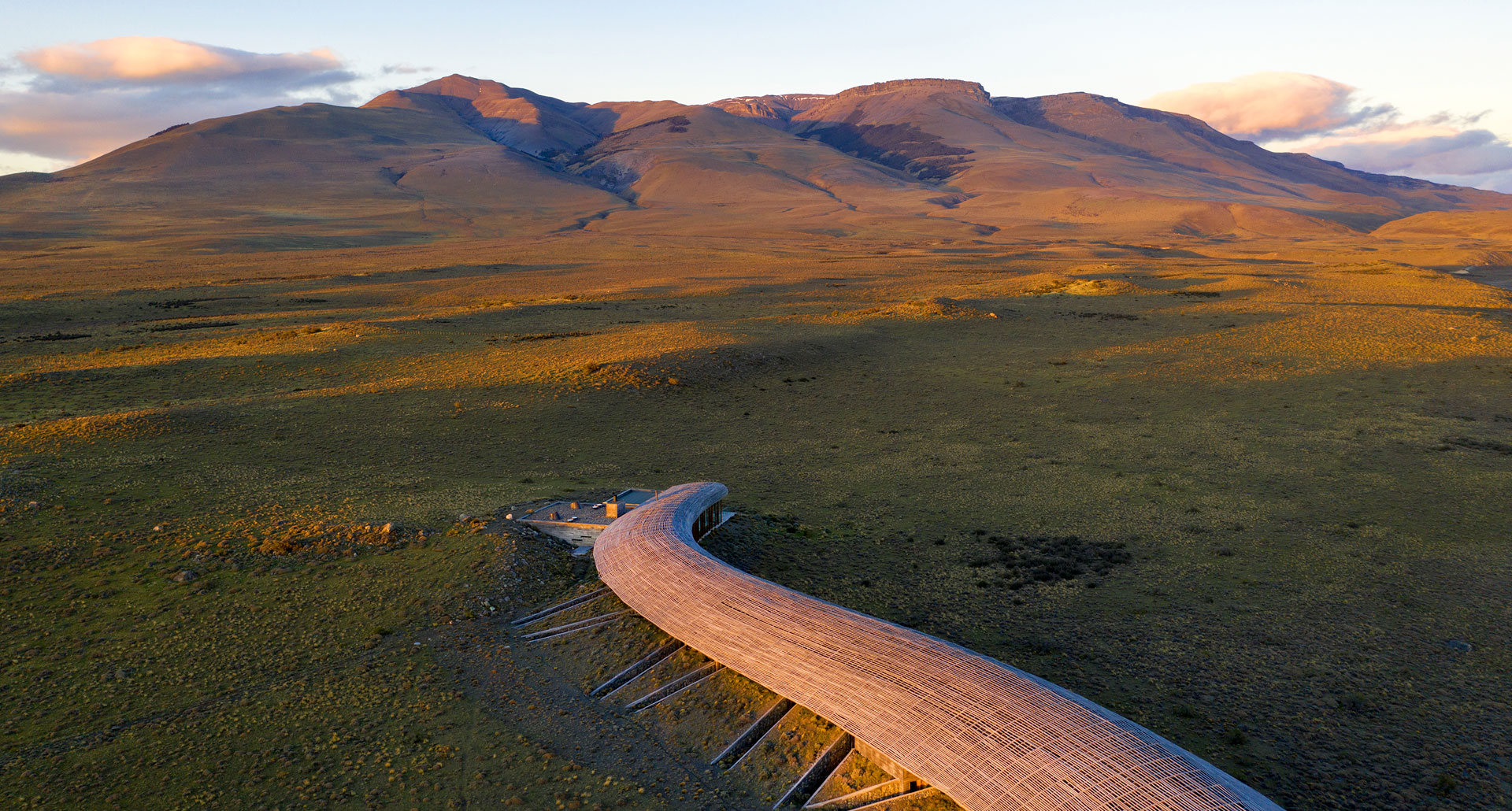 Tierra Patagonia is a dinosaur — a prehistoric, skeletal body washed ashore on Chile’s Lake Sarmiento. That’s how the hotel’s architect perceives it, at least. And just like the dinosaurs, she’d prefer it also disappeared.

On the edge of Torres del Paine National Park, there lies a stunning building. But its architect, Cazu Zegers, almost believes there should be no building at all. That the scenery is so awesome, nothing should come between the person and the place.

The building is Tierra Patagonia. The place is Chilean Patagonia, one of the most extraordinary on earth. Beautiful as it is, though, down here it’s possible to experience four seasons of weather in one day, with gusts of wind that have ripped car doors off their hinges. Zegers, who once camped at the site of the future hotel on a motorbike trip across South America, wanted to build a structure that invites the landscape in as much as it shields you from it, something that feels like a thin layer of atmosphere between you and the elements.

In her own words, Tierra Patagonia is “a second skin… allowing [guests] to experience the power and beauty of this mystical place.”

We’ll come back to the architecture. But first, we’ll acknowledge that the appeal of Patagonia is the ability to explore, to trek, and to hike a pristine land of lakes, mountains, and glaciers. Set on the outskirts of the region’s most famous national park, Tierra offers all these experiences in every level of difficulty. But whereas some luxury hotels here center their experience around the rugged outdoors, or total seclusion where the world ends, Tierra Patagonia considers itself the boutique for everyone. “It’s more a mindset rather than a demographic,” says Fiona Martin, who’s been with the company since before Tierra Patagonia opened its doors in 2011, when Tablet asks about the typical guest. 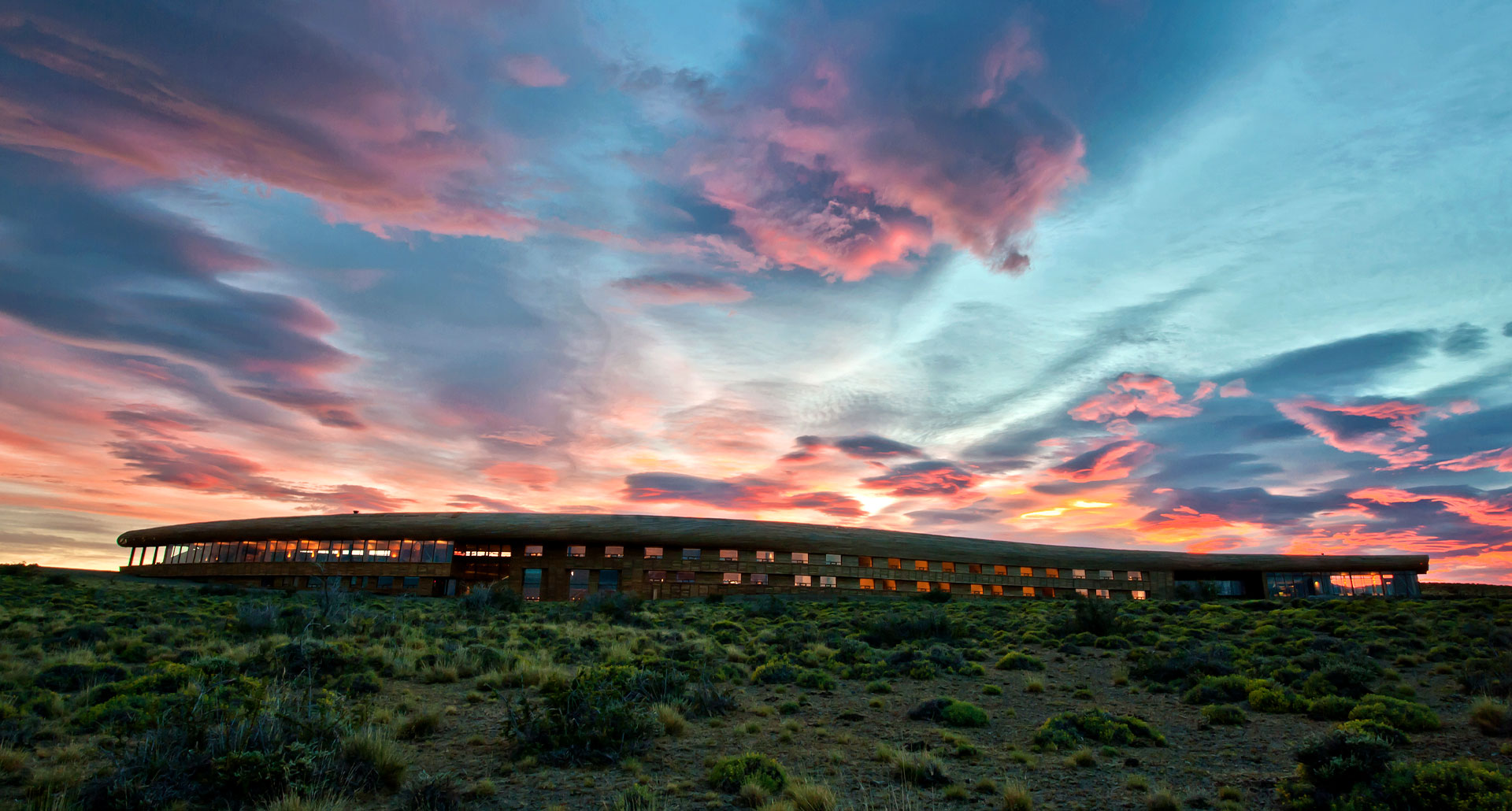 “There are people who want to go outside, they want to be in nature, they want to see the wildlife, hike the mountains,” she explains, but in each couple or family, “usually [someone] is not as active” as trekking through Patagonia implies. One guest might be “more culturally interested, or more interested in photography… We get a lot of designers, architects, artists.”

It’s an environment that’s notably social. “Because of the dynamics of the activities we offer, people make friends in our hotels,” says Martin. Various rooms at the spa look out through giant windows into the landscape, and the bar and restaurant serve a vast array of Chilean vintages. In one lounge area, a giant map of Patagonia adorns the wall. Guests gather here to plan out the next day’s activities, and to compare notes with other revelers. 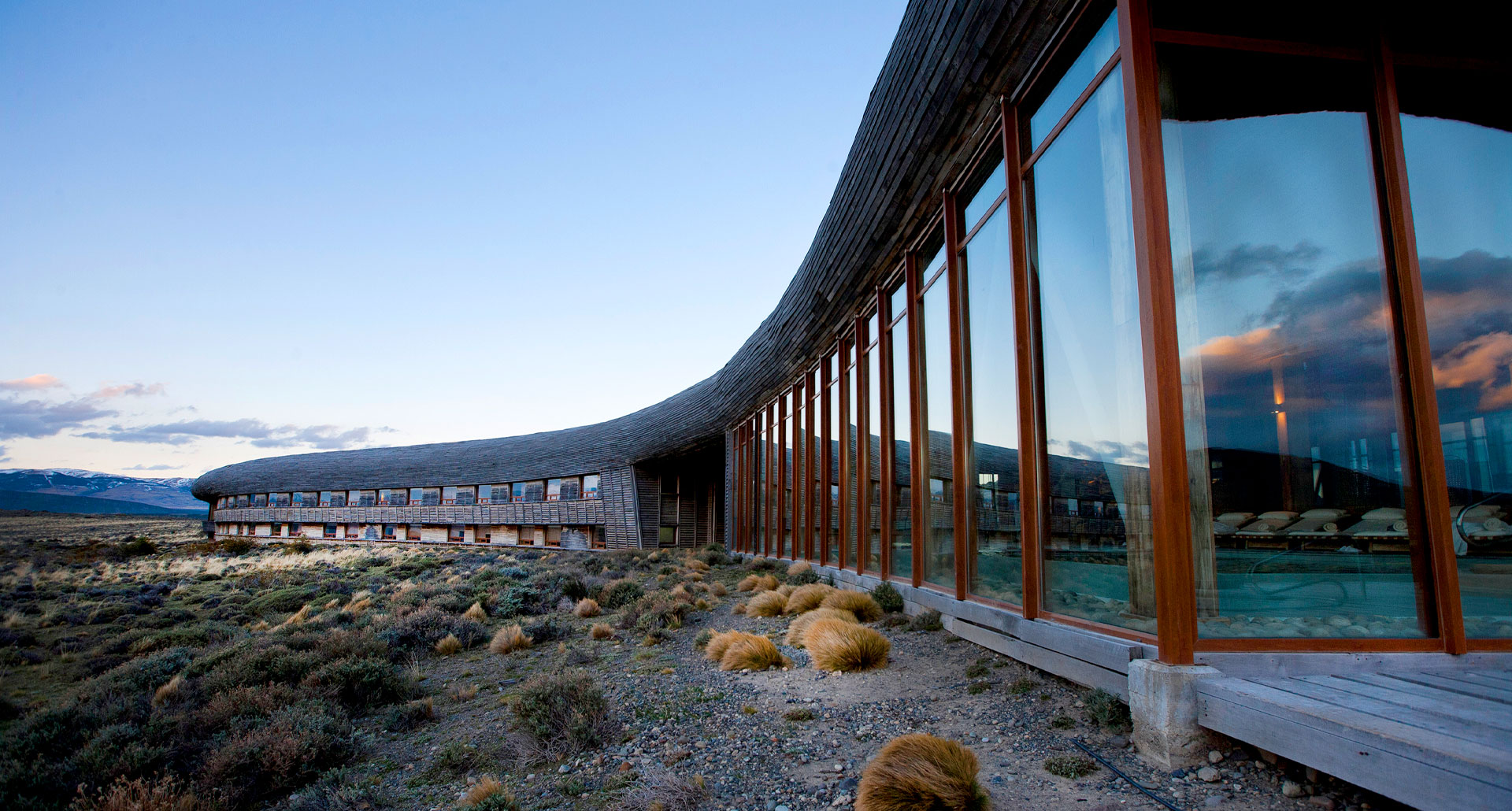 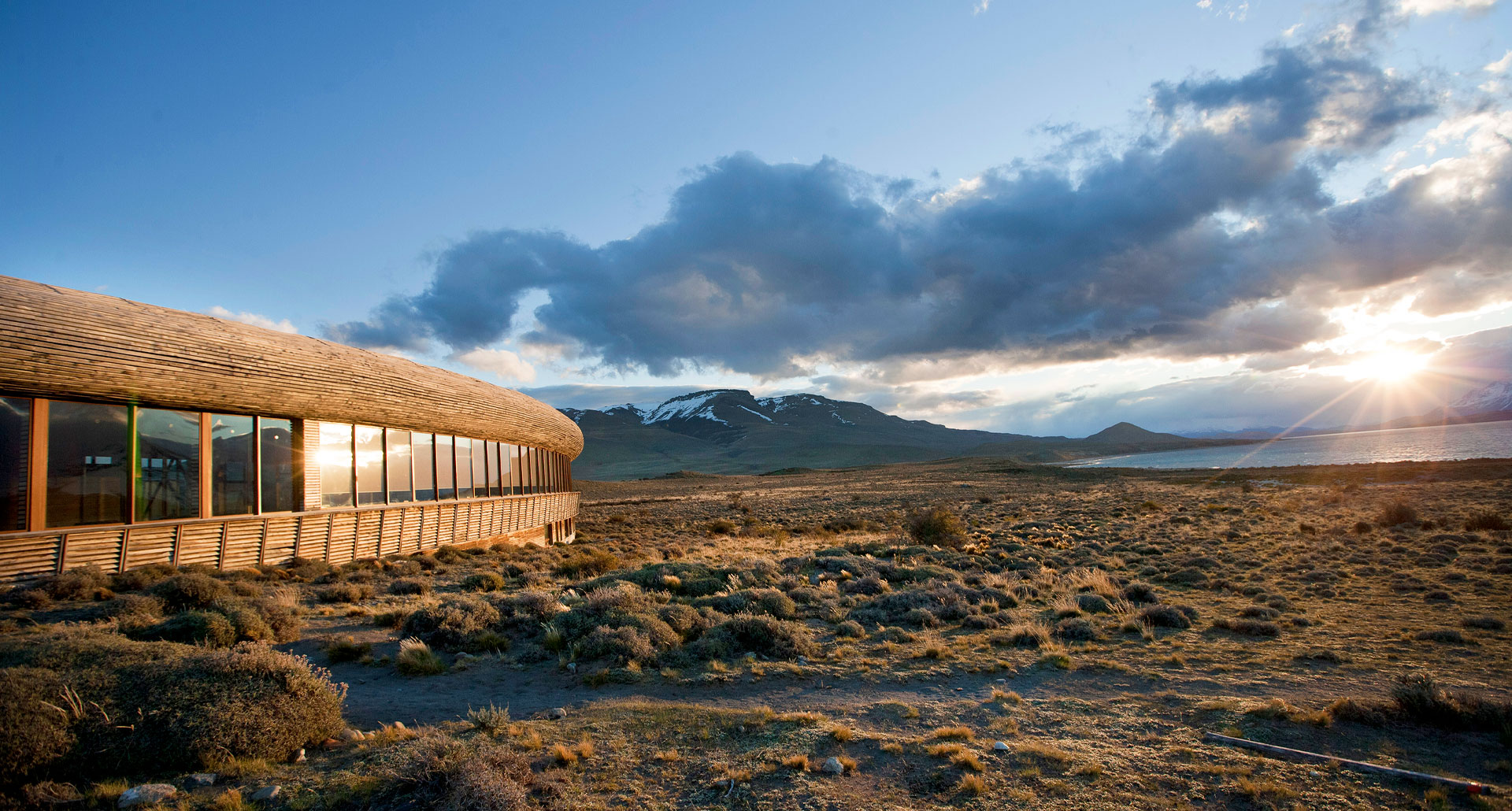 But back to that architecture, a cause worthy of the context. To Martin, Tierra Patagonia is a hotel with a heart. To Zegers, it’s a beating heart itself within its vast corner of the region. Stay with her — she goes as far with the metaphor as to identify each part of the corporeal whole. The head is the Paine massif, marked by the three giant granite peaks that define the stunning geography. The arms are the mountains stretching on and on along the horizon. The legs are the roads that lead to the hotel. And if the description’s a little too fanciful for you, you can’t argue the general truth of the matter. That the hotel blends into the landscape as naturally as an internal organ.

The low frame melds into the landscape, but it’s more than that. The interiors and exteriors both make tremendous use of local lenga wood, a material that starts as a rich yellow-orange and fades over the years in the harsh elements to match its Patagonian surroundings. Sheltered from the wind, the wood retains its rich color within the guest rooms, otherwise spare and whitewashed to better magnify the magnificent environment. At their first property, Tierra Atacama, materials were drawn from the local inhabitants — in other words, llama wool. Here, sheepskin rugs complement handmade throws and, printed subtly on the chairs, designs inspired by local fossils once found in the area. There’s not much that can grow here, so landscaped gardens would have been an ugly aberration. Instead, the vegetation you see around the hotel is completely natural — and the result of a painstaking effort. Before construction, teams transferred any grasses, bushes, or plant life endangered by the effort to a greenhouse, later replanting it around the finished hotel.

The result is a building that, by design, “integrates so seamlessly [into the Patagonian wilderness that] you can hardly see it until you’re in it.” 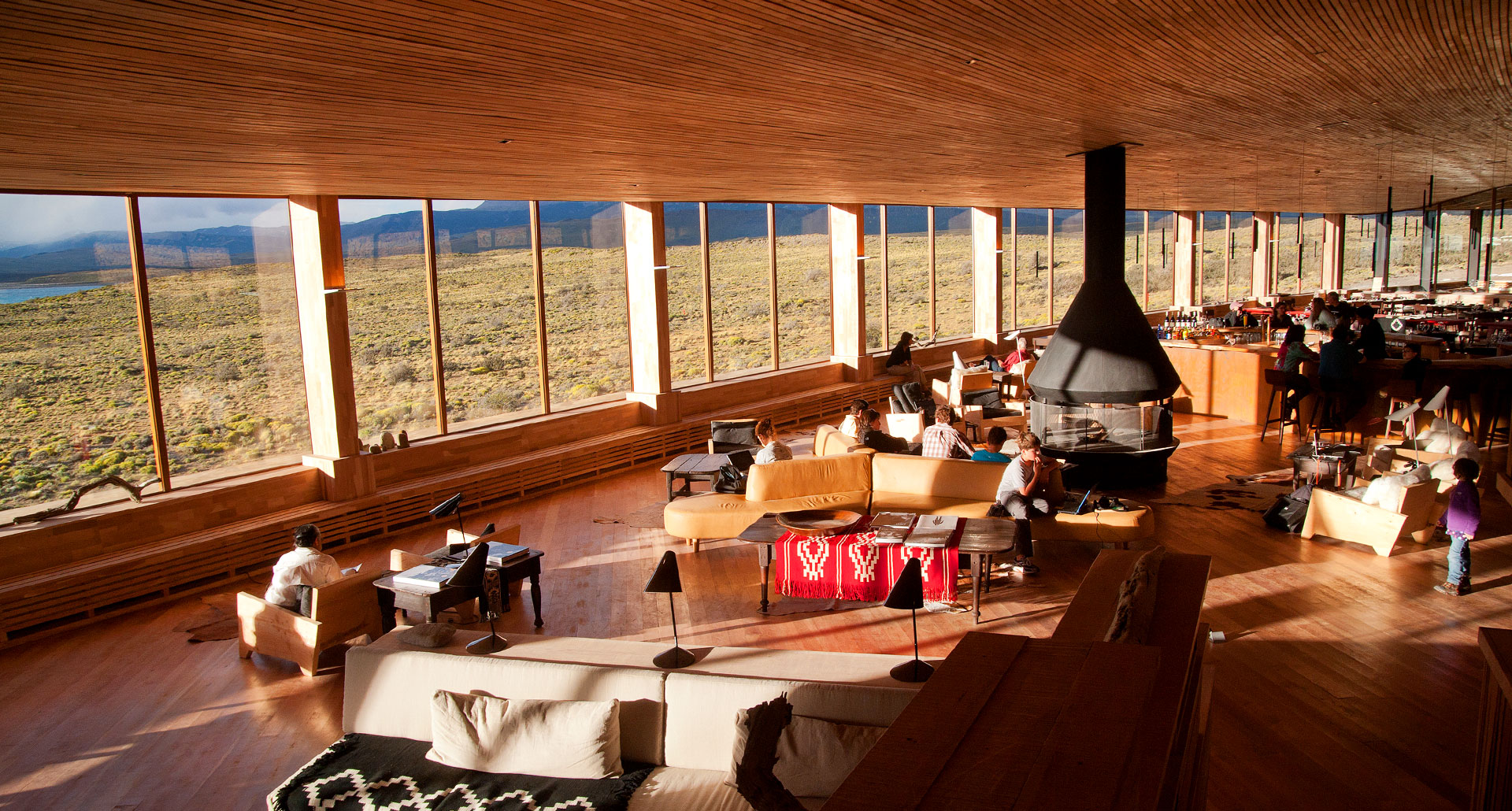 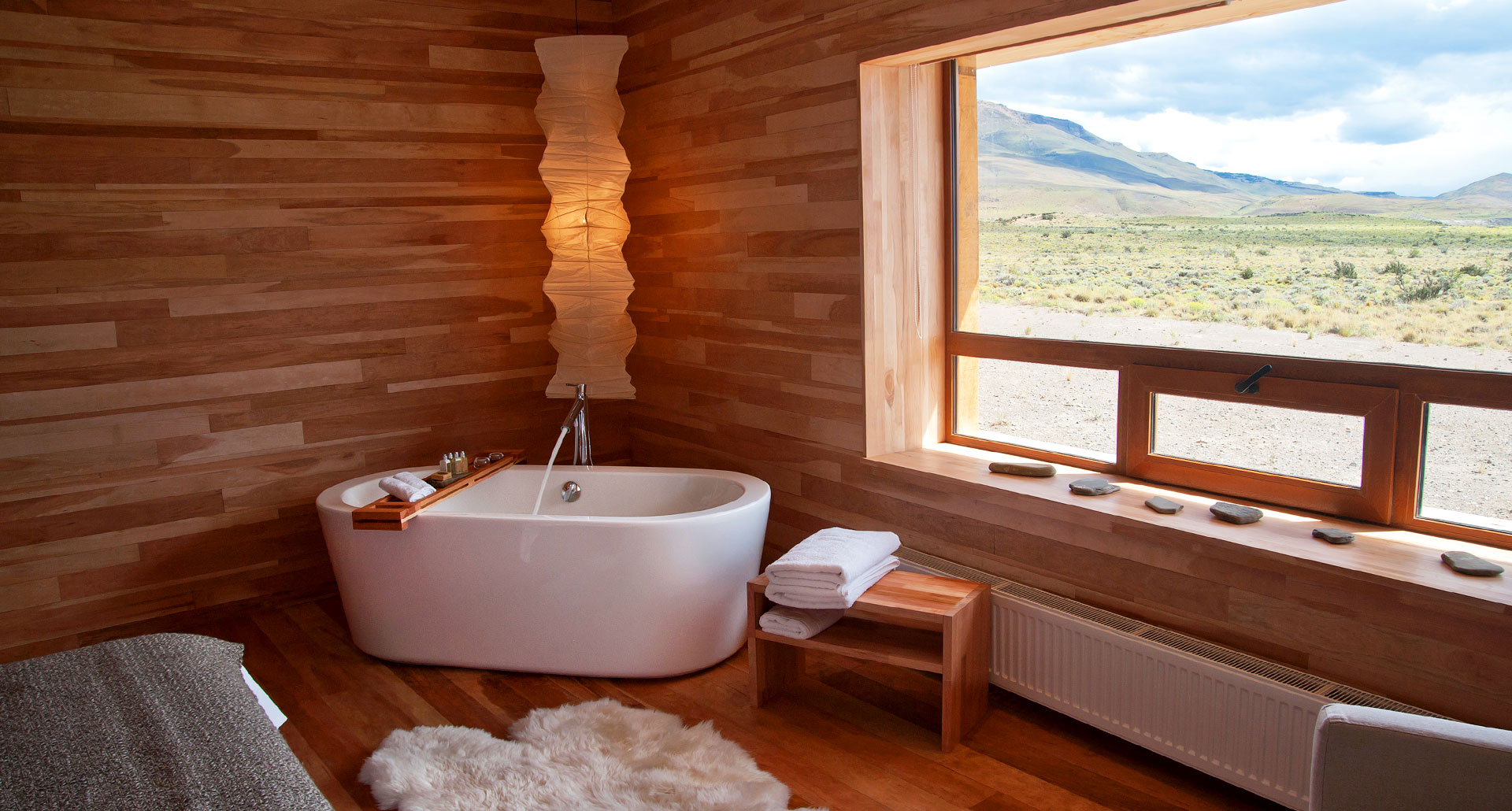 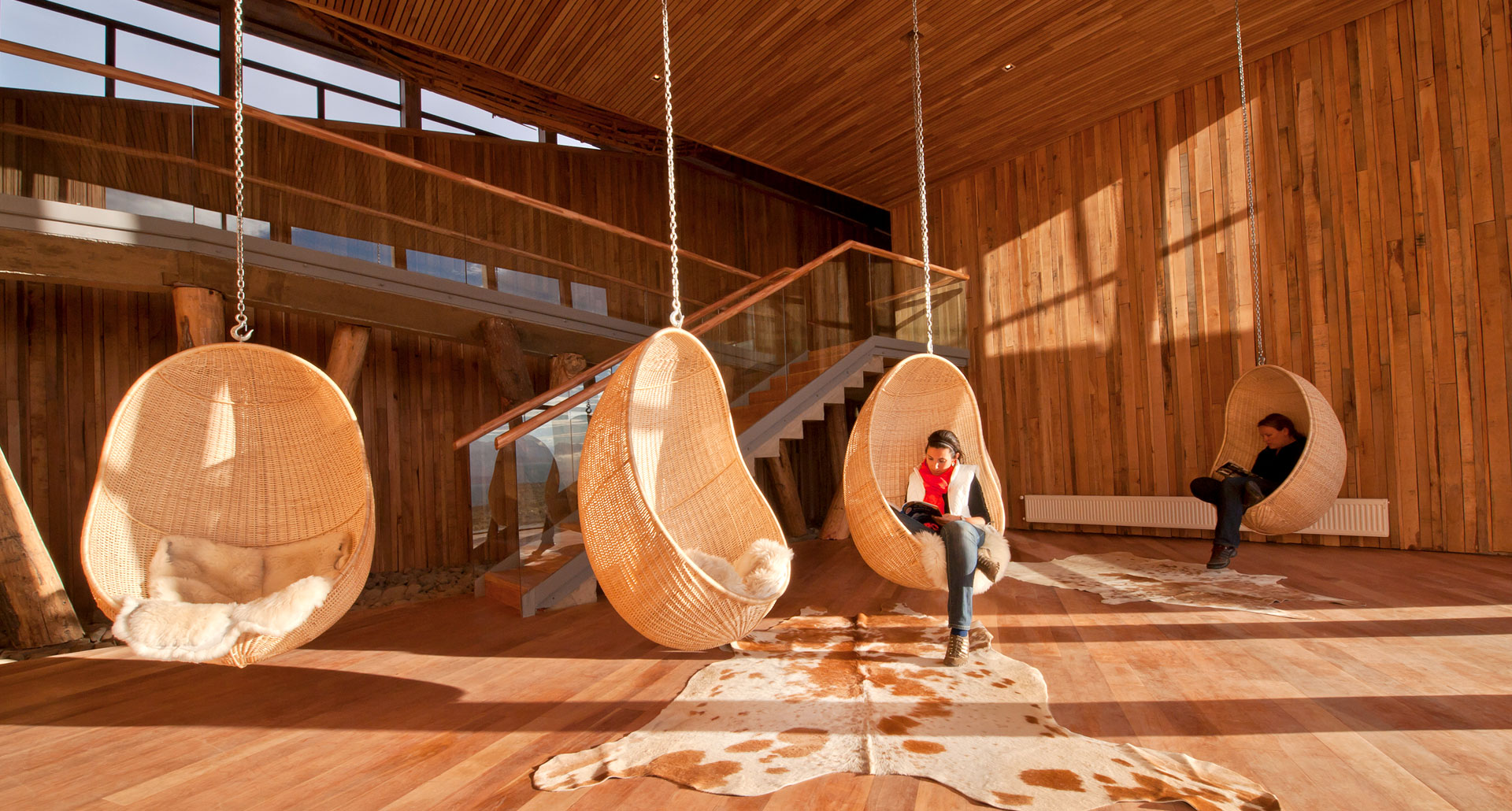 And once you’re in it, you’re very much in a Patagonian vortex, not a bland hotel. Floor-to-ceiling windows made of a specially designed glass let in the landscape while preventing wildlife — most frequently, the cameloid guanacos and ostrich-like ñandú — from spooking at their reflections or the people within. If they could see through, they’d ogle guests lounging in handmade wickerwork chairs sipping local wine. But they can’t, so you can sip and stare without inciting a stampede.

Public spaces like these pervade the hotel, set around fireplaces and leather sofas. It’s the manifestation of a clear philosophy of the hotel. That here is a landscape that demands observation, even if its harshness sometimes precludes it. Luxury at Tierra Patagonia is the ability to drink it in without feeling its brutality. 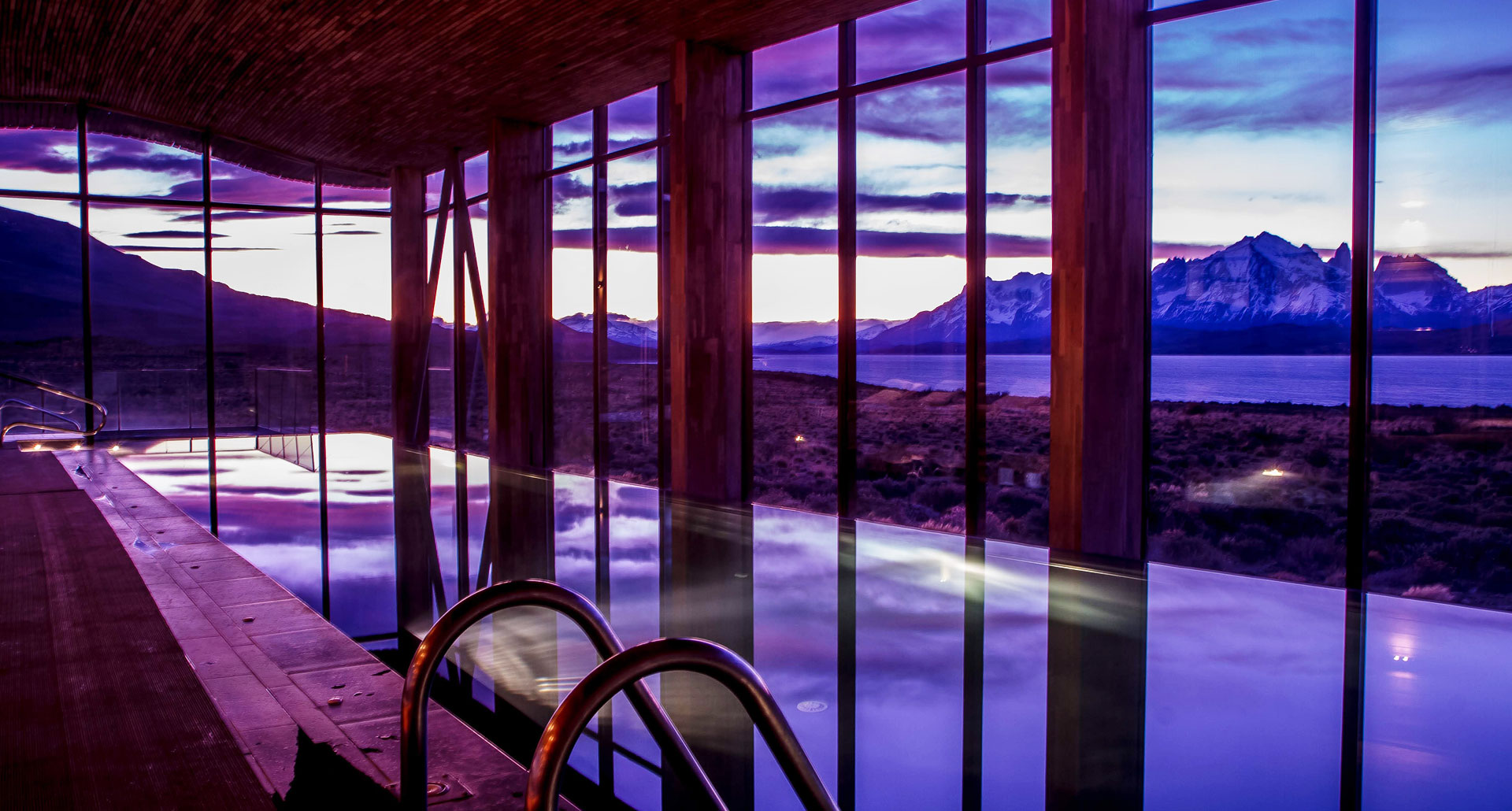