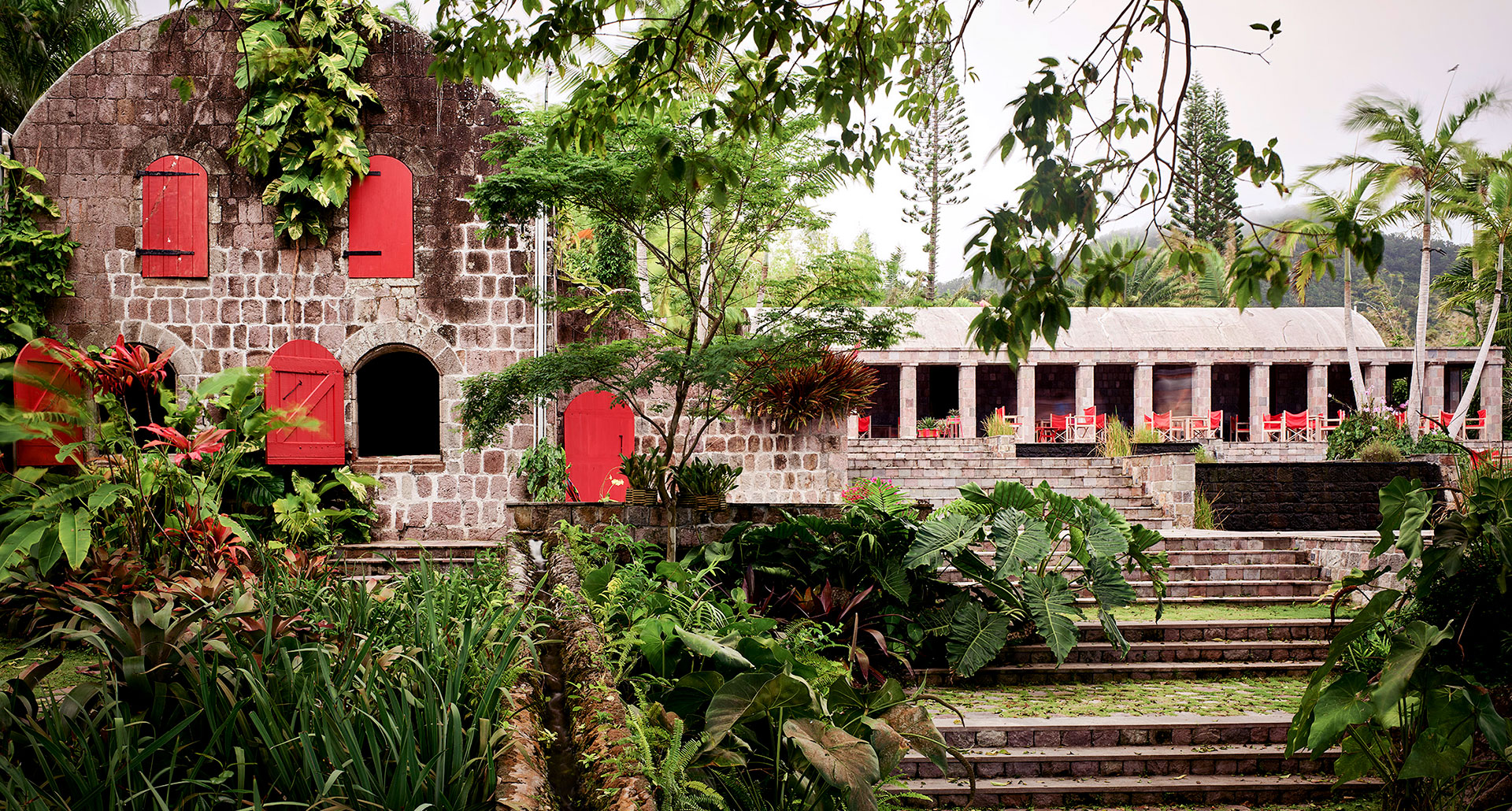 On the tiny Caribbean island of Nevis, Golden Rock Inn is an artist-designed garden paradise wrought from the ruins of an old sugar plantation. Entering its orbit feels a bit like falling down a rabbit hole — one you may never want to leave.

Golden Rock Inn is a Gauguin come to life, or maybe a Monet. Set on a hundred acres of jungle hills rising above the Caribbean, its eleven cottages come decorated in electric yellows, pinks, and blues that stand out against the natural green of the lush scenery and the gray weathered stone of the old plantation. Despite its century-old roots, the Golden Rock Inn of today is the confluence of modern artists at the top of their fields. That includes founders Helen and Brice Marden, a married couple who took their storied history in the art universe and painstakingly applied it to the hospitality world.

In a way, their creation is less an inn than an aesthete’s playground. “It’s like stepping into a 3D painting,” describes Andrei Mocanu, Golden Rock’s general manager. He’s more than qualified to make the assessment, having lived alone and secluded in that painting, along with his family, for the entirety of the pandemic.

If you know Nevis (pronounced: nee-vis), you know it wouldn’t be the worst place to quarantine. As far as Caribbean islands go, Nevis is more in the mold of hidden gem than perennial international destination. Saint Kitts, its counterpart that makes up the dual-island country, has a little more name recognition, and it’s where you’ll find the airport and a broader selection of bigger hotel names. Despite its well-earned moniker, the “Queen of the Caribbean,” Nevis is like the little sister, known for its slow pace and its relative lack of commercial development. In terms Tablet loyalists might understand, if St. Kitts is the Ritz-Carlton, Nevis is the little boutique.

Golden Rock Inn, then, is a boutique on a boutique — a gem on a gem that embodies the criteria of a Tablet hotel better than perhaps any other. It is beautiful, completely irreplicable, and very much a destination in its own right, despite the gorgeous island setting. Located 1,000 feet up on Mount Nevis — the dormant volcano that peeks out from the middle of the island — Golden Rock is a garden paradise that meanders through and makes sensational use of the ruins of the old plantation. Martin Larsson, who handles marketing for the resort, notes the whimsical, dreamy characteristic that gives it something of a fairy-tale quality. “It’s like Alice in Wonderland,” he says.


Ed Tuttle, the famed architect behind many an Aman resort, designed the stone area outside the restaurant and the domed pavilion — making the space feel a little like an Asian design hotel, a feeling completely unique in the region. Meanwhile, Raymond Jungles, a collaborator of Frank Gehry’s, is the landscape designer responsible for the magnificent gardens on the 100 acre property. But despite their weighty contributions, the bulk of the credit goes to the founders.

“He’s one of my favorite artists on the planet,” says Daren Grisham — Tablet’s Head of Hotel Curation — of Brice Marden, the artist whose accolades include a 2006 retrospective at MoMA. Grisham happened to cross paths with the Mardens on his own visit to Golden Rock, and was struck by their passion and hospitality. “You look at [Golden Rock] and clearly they had a vision for it. You feel like it must have looked like this forever, this lush little oasis. But the opposite is true. A lot went into it,” he notes. And he’s right — everything is curated, a piece of paradise it can be difficult to leave. “You feel so little pressure to do anything at all,” he laughs. “We had all these ideas for activities — but when we got there it was just so incredibly tranquil, it was like, ‘let’s stick around here.’ We canceled a lot of what we had planned to do.”

They’re not alone. You could easily spend an entire vacation without leaving the grounds. The gardens, some 40 acres alongside the brightly colored cottage accommodations, are some of the strongest testaments to this place as an artist-developed paradise. “The placement of everything has been done so thoughtfully,” explains Larsson. Vegetation brushes your arms on the walking paths, but don’t be fooled — the overgrowth is intentional, a way to make a painting feel natural. “A lot of the gardens are like art installations,” Larsson explains. You’ll be engulfed in green and then, “turn the corner and boom — wow. Red. Then a yellow. It’s like, the colors explode.”

Mocanu concurs, gesturing to the cottage behind him. The porch is turquoise and pink, with deep green vegetation reaching over the railing. It’s the Scarborough cottage, one of the several Hillside accommodations that dot the ridge through the gardens.

All the rooms here feature a porch, veranda, or deck, and the Hillside rooms each share a patio with another accommodation — the better for families or other groups who want to spend time together. On the higher end, the Garden Cottage offers its own private garden, the Paradise Suite provides a large terrace with views through bamboo towards the beach, and the Sugar Mill Suite — developed from the 19th-century mill, is a two story, cut-stone house with views of the beach. Completing the property is a large spring-fed pool created from the mill’s old water cistern, and a restaurant that draws guests away from every other resort on the island.

Grisham remembers meeting guests from the nearby Four Seasons and other resorts, drawn by the reputation of the restaurant, discovering that Golden Rock had a hotel, too. “It’s one of those best kept secrets,” he notes. “Definitely in Nevis, but maybe in the entire Caribbean.”