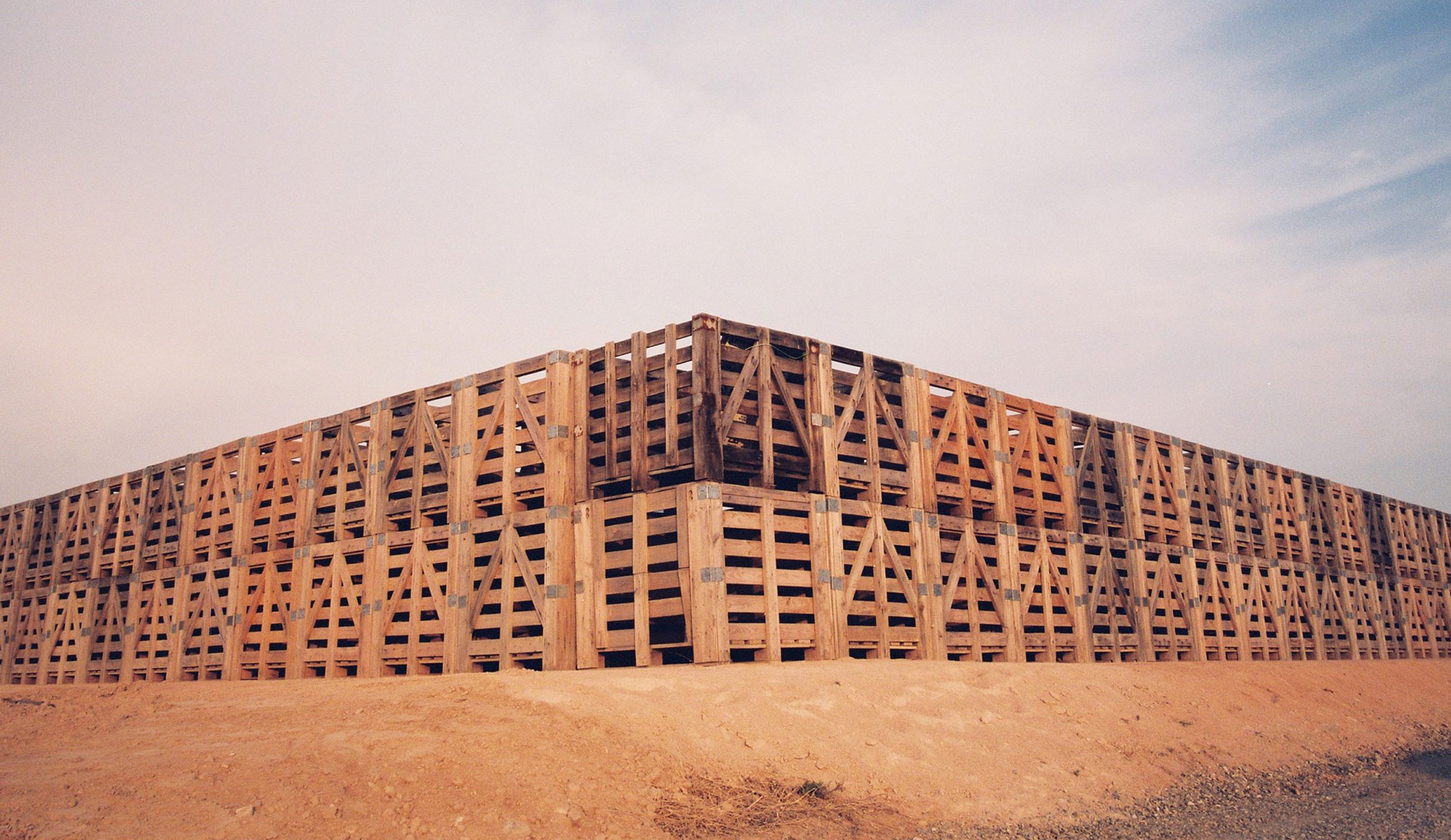 The badlands of the Bardenas Reales are that rarest of Spanish wonders: one that’s relatively undiscovered. Here, an ancient wind sweeps through desert canyons and blows against a modern hotel — a design masterpiece that’s drawing more attention to this isolated region.

Clay and sandstone forms pose in place, flipped inside out by the elements — think Turkey’s Cappadocia or the national parks of the Colorado Plateau. The Bardenas Reales nature reserve offers the same geometric attractions, a landscape that looks more like it belongs on some uninhabitable sun-baked moon than here on Earth, let alone a region of Spain known for having the best produce in the country.

This is a place with a complicated geography. And it’s on a fertile wheat field on the outskirts of the jagged terrain that we find our own reason to discover this somewhat overlooked destination: Aire de Bardenas, an intimate 32-room hotel that’s spent its nearly 15-year existence bathed in awards for design. 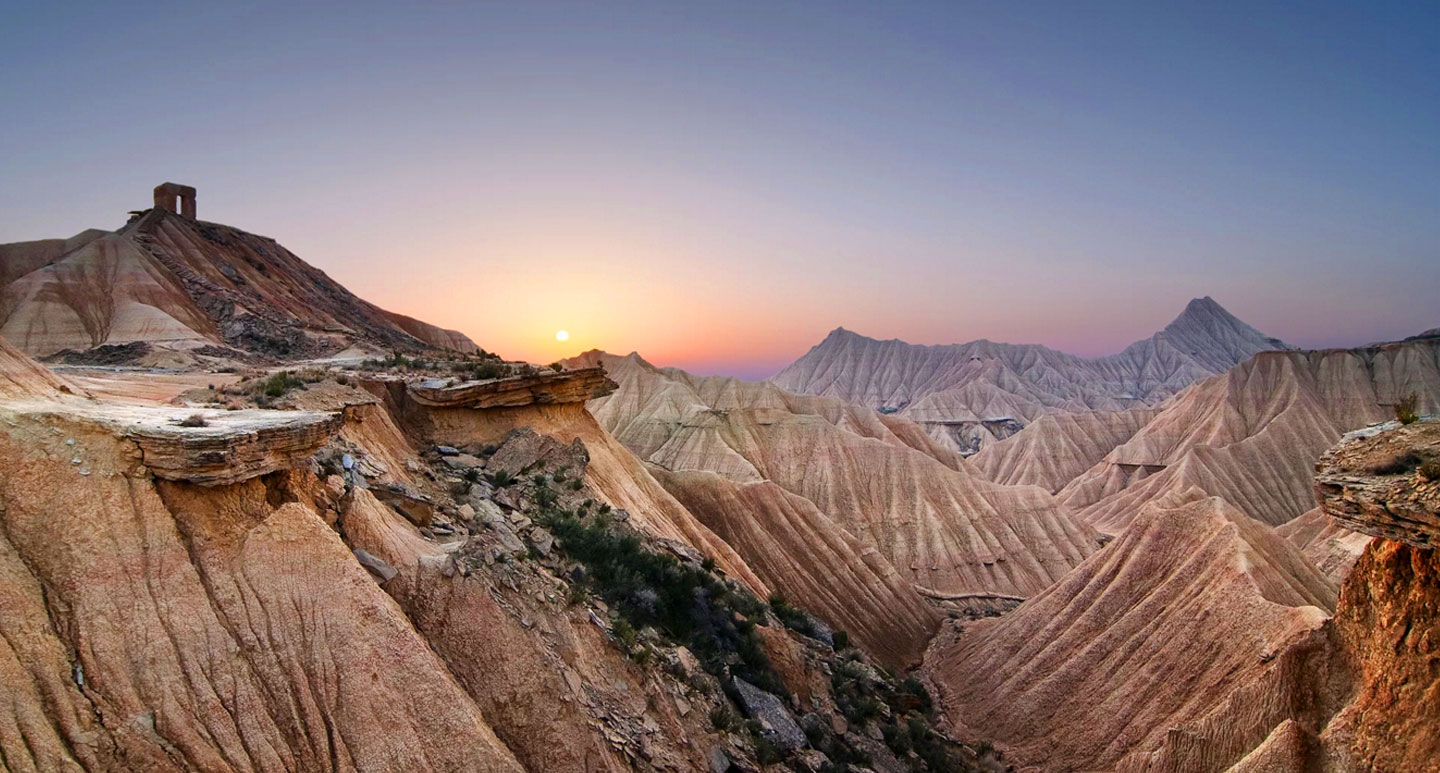 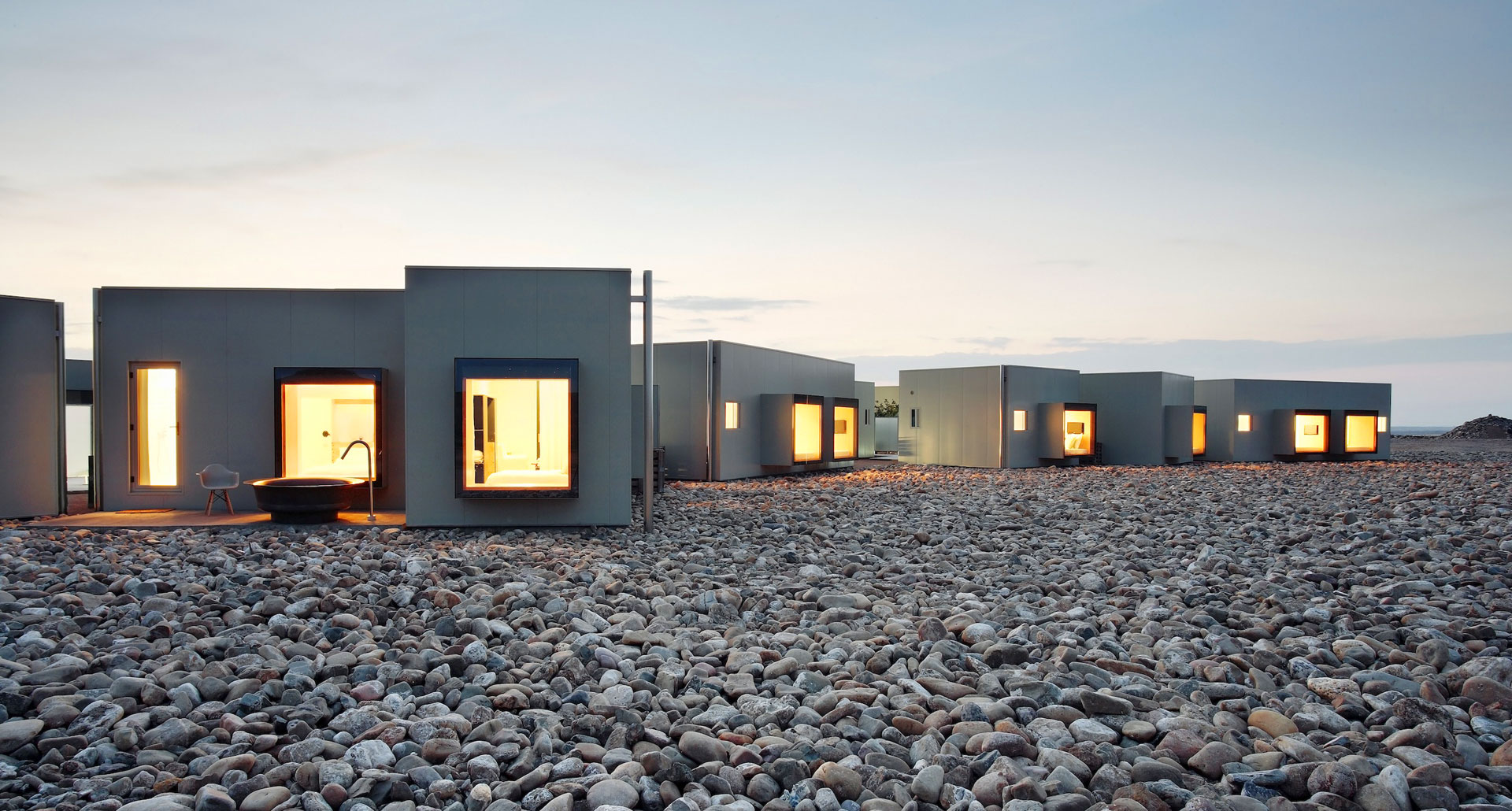 One look and a layman understands the architectural category: cutting-edge. But though it may look like a moon base, its plaudits derive from the way it grounds itself in place. It’s the same way a city hotel might draw influence from the local architecture. A sunny spot in Miami Beach that sports an Art Deco facade, say. The form of Aire de Bardenas does the same, highlighting through mimicry the features of its own neighborhood.

The low-slung, single-story layout of the main building blends into the flatness of the landscape. The outlying cubes bring to mind the barns and vegetables coops in the surrounding fields. Polished concrete floors even feature rocks extracted from on-site.

And then there’s the wind. To guard against it, to give their little plot a little relief, the architects considered plants and permanent structures, but those were too expensive, they told Mark Magazine in 2008 — not long after completing the project — too involved for the strict constraints of time and budget.

At long last, they found their answer by looking around. 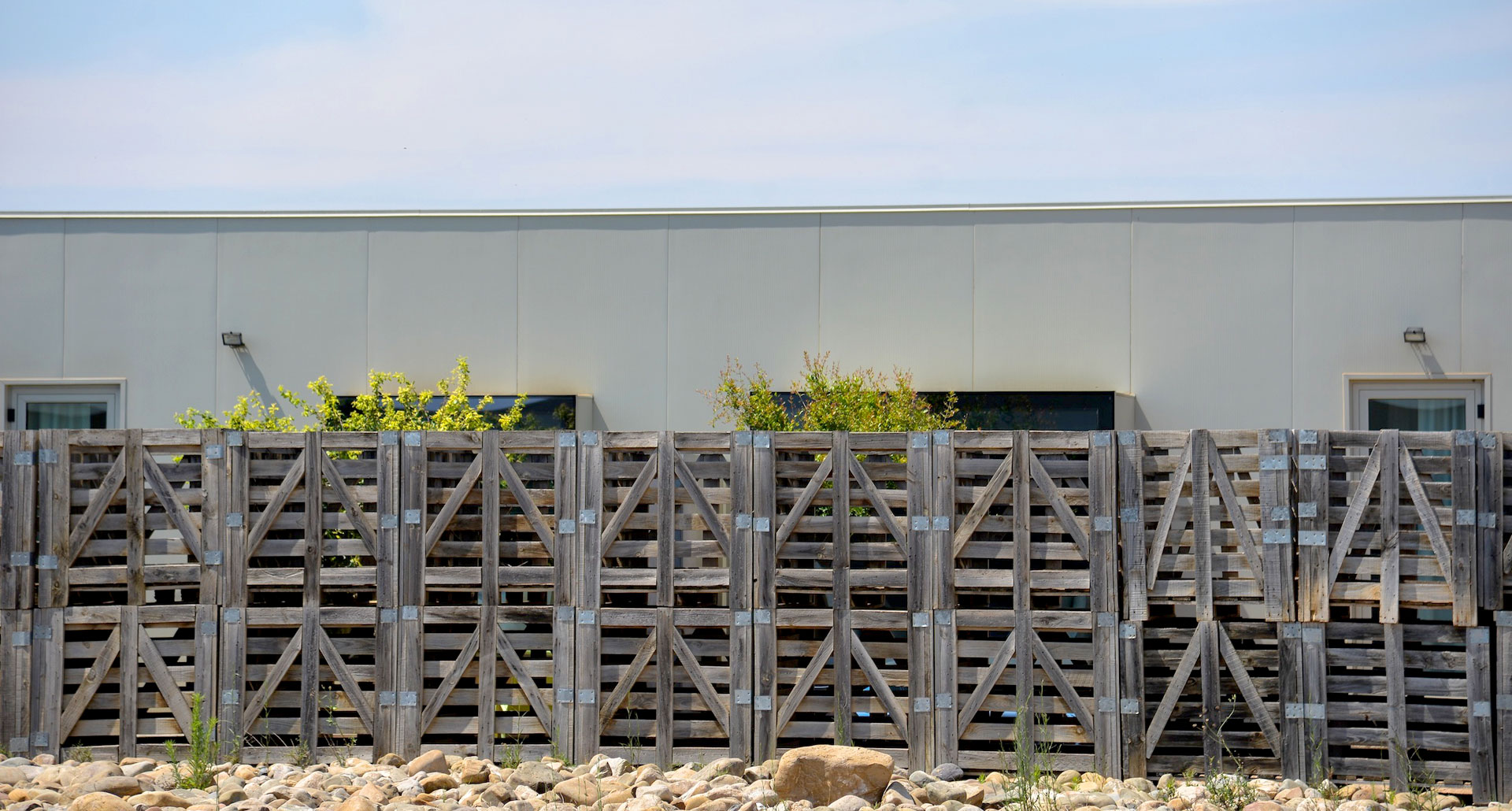 Today, the many rows of wooden containers that greet you at Aire de Bardenas are the very ones, bought and repurposed, that area farmers use to gather their crops. Inexpensive and highly mobile, they block the worst of the wind while allowing a cooling breeze in the summer. It’s features like these, practical little touches that signal a respect and appreciation for the landscape, that make Aire de Bardenas such a special hotel.

The interiors showcase that same respect, purposefully simple spaces defined by — what else? — the windows into the outdoors. And when we say into, we really mean into. As in, they jut out and hover above the landscape. These aren’t picture windows, they’re telescopic. Some are big enough even for beds, nooks in the wall that let you hang out in the terrain itself. Views peek into hotel grounds, private courtyards with outdoor baths, or else over wheat fields that stretch towards the beginning of the park.

“This was our vision,” one of the architects, Monica Rivera, explained to Design Build. “We insisted on keeping the landscape visible — in fact making it stronger than the interior.” In the ten additional bubble rooms, stark, translucent spheres that look out at the sky, that sensibility’s even more true.

The buildings are laid out in a cluster, forming a terrace bar in a central courtyard — a construction that is itself a nod to the layout of a typical Spanish palace. A five-minute drive away in the old town of Tudela, or forty minutes away in Olite, you’ll find the real thing. Other benefits of the surrounding culture filter through the restaurant. Navarre vegetables are so cherished that they sometimes receive a special Denominación de Origen, a rigid way to regulate and verify quality that’s usually reserved for wine.

It’s a testament to the geographical variety of the region that you can eat a world-renowned artichoke, or even take in an olive oil tour or wine tasting, on the same day you visit the hundreds of miles of hiking, biking, or 4×4 paths in the semi-desert. 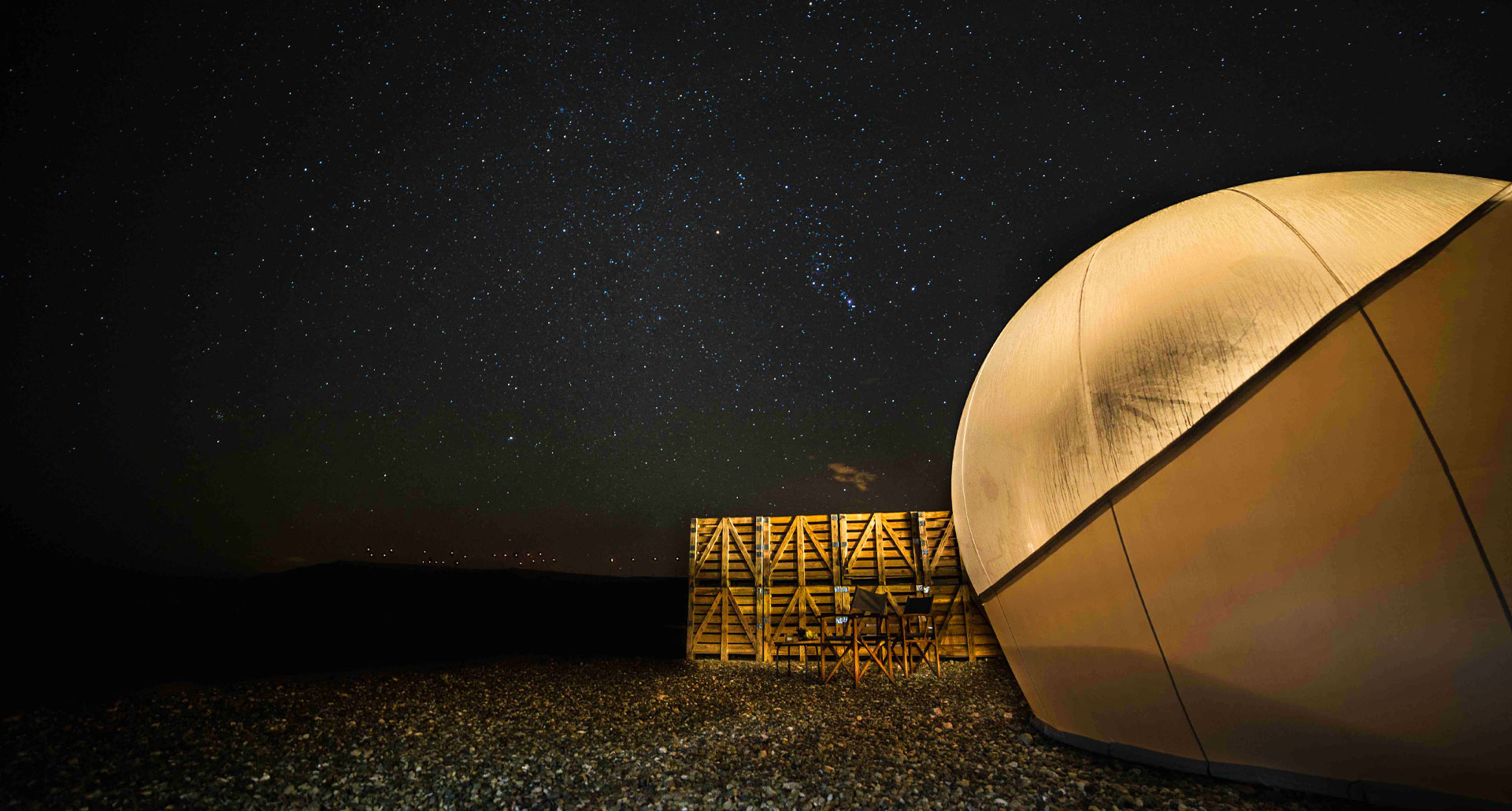 But for us, we’ll always come back to the hotel, marveling at the design that so seamlessly blends with this aberration of a landscape. The priority, Aire de Bardenas tells Tablet, was simply to make certain that the “shepherds and the sheep that pass through… did not feel invaded in their day to day.” Through the thoughtful, measured construction, they achieved something else. Comforting but lightweight, solid but impermanent, it could, as they say, “disappear without leaving a trace.” A fitting declaration for a hotel named after the air.