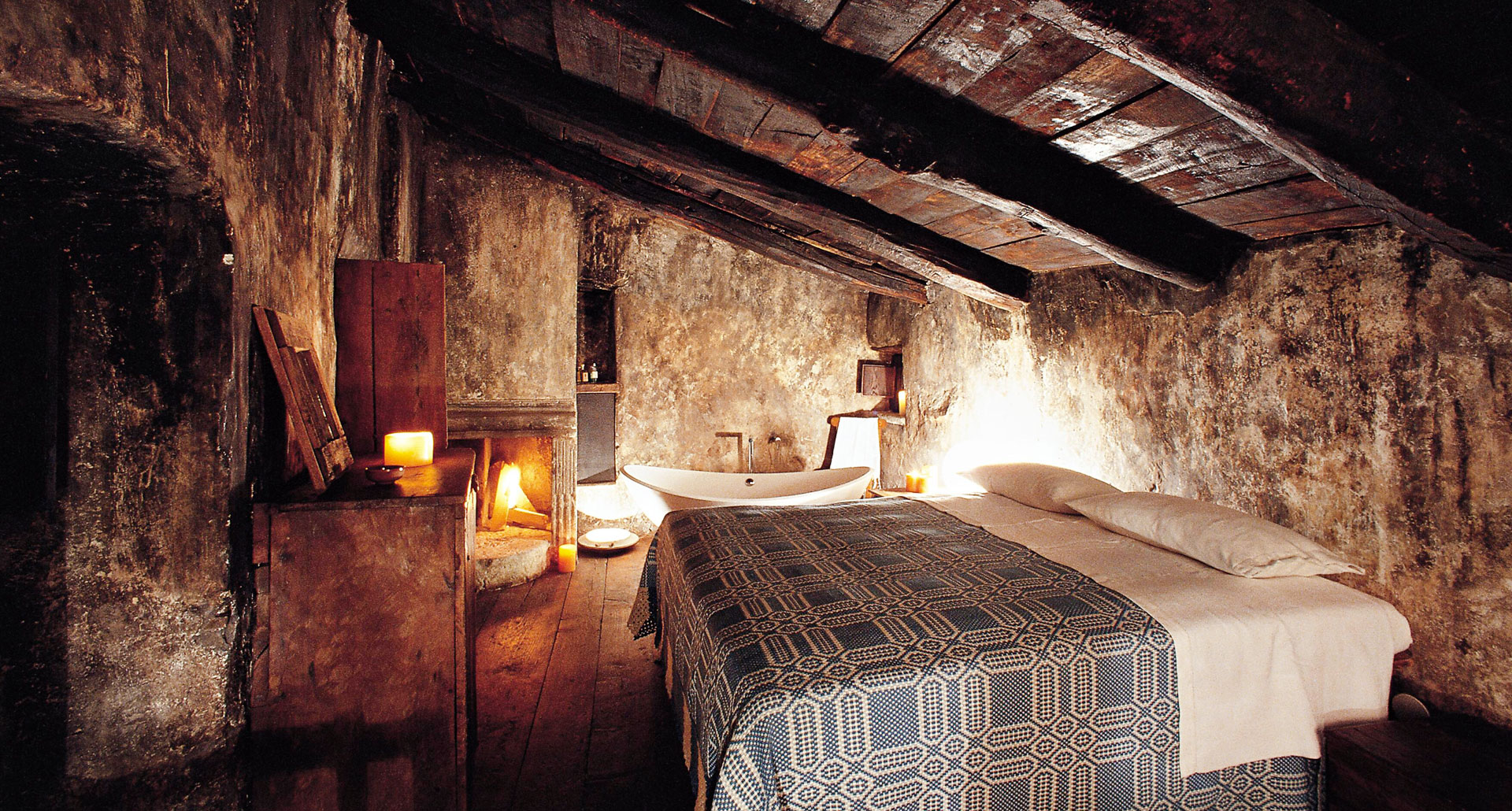 Santo Stefano di Sessanio was destined to become a ghost town. Instead, it became a hotel. And not just any hotel, but Sextantio, a “distributed hotel” that’s spread throughout the ancient Italian village.

Last fall, the Italian town of Santo Stefano di Sessanio found itself thrust into the news. In a scheme that’s become something of a pattern throughout small towns of Italy, the mayor announced a plan to revitalize its economy. Come to our village, he called out to the world. We’ll pay you.

What led to such a plea is a common reality in the rural regions of Italy. Santo Stefano’s peak came as a flourishing port of call for the wool industry as far back as the 1500s. In the postwar era, economic changes caused further decline. Small towns like this one, high in the Abruzzi mountains in the south, emptied out into the bigger cities, or else their people migrated across the Atlantic.

The enormity of the decrease in population is impossible to overstate. Santo Stefano was well on its way to becoming a ghost town. Then, something amazing happened. Thanks to one single-minded missionary, nearly a quarter of it became a hotel: Sextantio. 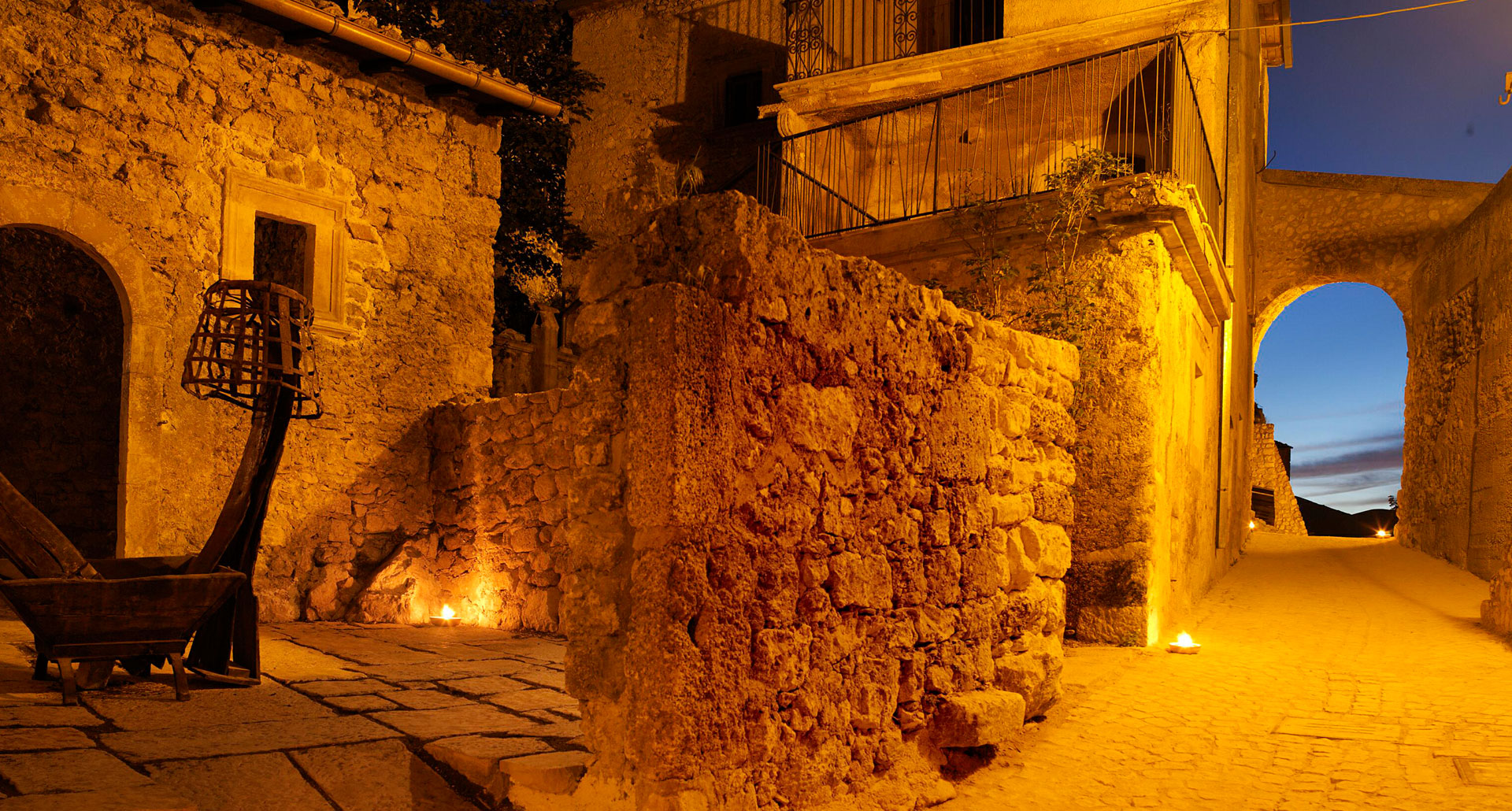 Sextantio’s 30 rooms are not clustered in one location, but spread all throughout the borgo. Its reception, restaurant, rooms, and suites hide in plain sight, peppered among the buildings of the rest of the town. In Italian, the concept is known as an albergo diffuso. In English, the translation’s less catchy but plenty instructive. A distributed hotel. And despite some swanky amenities in a town that’s hardly changed over the centuries — underfloor heating, the occasional massive egg-shaped bathtub — the renovations don’t stand out. In fact, that’s the entire point of this place.

The rooms are lived-in spaces that have evolved over generations. According to Daniele Kihlgren, the hotel’s intensely passionate founder, his team did everything they could to “protect the traces of this historical experience.” Protect the traces, in other words, of the people who lived there. To that effect, walls remain decorated with the scars they’ve endured from years of use.

For the interior design, Kihlgren and his partners dove headfirst into archival photos and oral history — even employing the help of an anthropologist — to reconstruct rooms that match historical precedent. Here, Kihlgren’s favored works have an advantage over their more universally acclaimed foils in Rome. “We can’t go to Piazza Corsini, steal its fireplace, and put it in Piazza Farnese,” explains Kihlgren. “But this is somehow possible in the historical heritage we are working with.”

Whether floors, fireplaces, or furniture, Kihlgren found Sextantio’s bevy of recycled materials in cellars and landfills, often disassembled, “as if they were the subject of a kind of damnatio memoriae.” These relics fill the rooms at Sextantio. So too do wool mattresses set on wooden planks, blankets with patterns inspired by local tradition, and soaps and candles handmade using traditional techniques. Simple luxuries to complement the contemporary ones.

Kihlgren has dedicated his life to guarding towns like Santo Stefano from construction, and to proving that you don’t always have to rebuild to move forward. Drive about 300 miles south and you’ll see the same commitment in his other hotel, Sextantio Le Grotte della Civita in Matera. In a town that’s famous for the houses carved into the hillsides, Kihlgren’s hotel renovates and restores those very caves into another immersive albergo diffuso. “These small villages are much more connected with the environment than big cities,” Kihlgren says in a documentary about his life’s work, his hotels. “And in spite of this connection, people who established tourist [businesses] here spoiled the small villages, building new houses that clashed with the old rural framework and its profound identity.”

It’s a somewhat ironic stance, considering Kihlgren’s family made their fortune in the cement industry, but it’s one based on sound logic. “In these places where once 3,000 people lived, and today you hardly can count 50 inhabitants, it makes no sense to build new houses.”

Which brings us neatly back to the offer from Stefano di Sessanio to pay for more inhabitants to fill a town that once flourished. The deadline to apply has passed, but the rules were, in any case, often prohibitively strict. 40 or younger. Must be a resident of Italy. And if you wanted to claim their offer to help fund your new small business, your options were the following — “tourism or cultural guide, tourism informant, cleaner, maintenance technician, drugstore operator, or… work with the local food industry.”

When we asked Kihlgren about the offer, he was cautiously optimistic. “It really depends on how they choose the people who go there,” he said. It’s the kind of response you’d expect from the same man who told us “you have to be a bit extremist” when you’re revitalizing a place like Santo Stefano di Sessanio — lest you let tourism “spoil” it.

“I am more passionate about the [hotel] project than the idea of a tourist destination,” he concludes. You have to see your renovations as a type of preservation, not as a gimmick to draw attention. Still, he says, “I think that in today’s world this should and can be experienced by people who come from all over.”

“Often the people who come from the outside… are those who have more love for these places. Often more than the original inhabitants. It is ugly, but very true.”